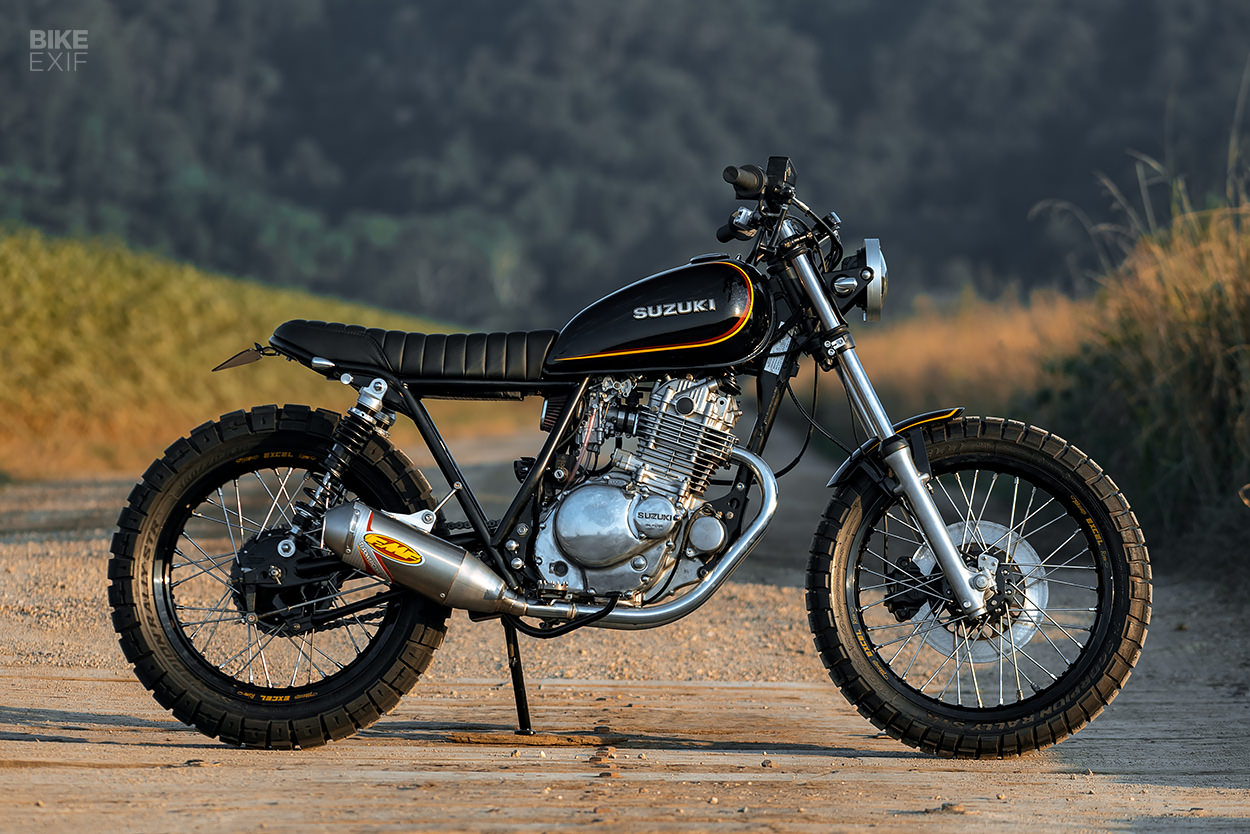 If you haven’t succumbed to the charms of smaller motorcycles by now, it’s probably because you haven’t ridden one yet. That’s the opinion of Tom Gilroy, founder of Purpose Built Moto in Queensland, Australia. And judging by the work his shop’s done on this cheeky Suzuki GN250 scrambler, you can tell they’re true believers.

“Once you liven up a small bike a bit with a few performance mods, and get a bit of weight off them, you’re hard-pressed to find a bike that’s more fun to ride,” he says. “Anywhere you point this GN250, it’s going to deliver a smile to your face. All you gotta do is rip back the throttle and enjoy!” 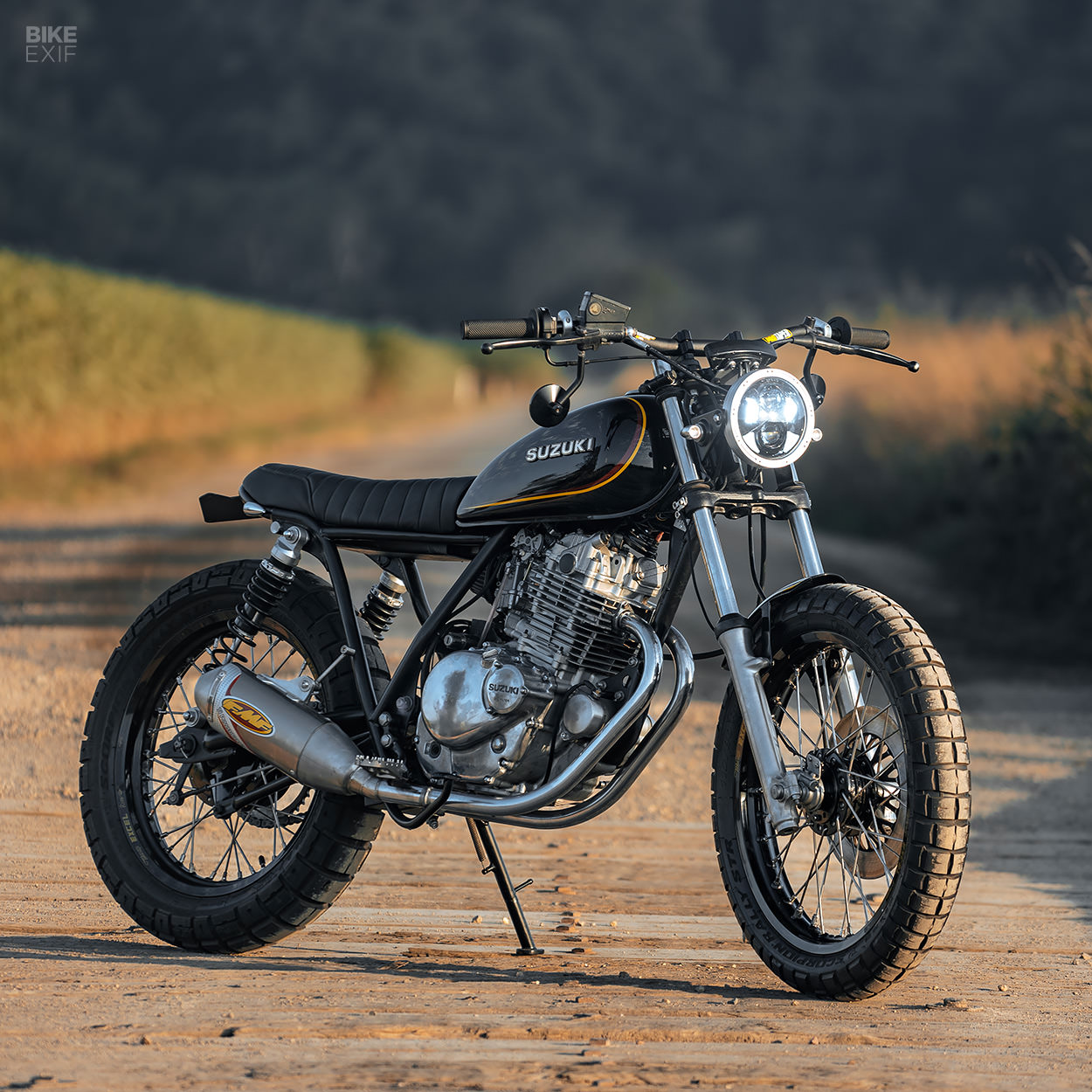 PBM have some history with the humble Suzuki GN250. The first custom GN250 they ever built was also their first customer project, their first scrambler, and the first bike to garner them attention online. This one’s the third GN the shop’s built, and it draws on lessons learned from the first two.

“This time around we were given the base bike and told to go again, but better,” says Tom. “I do love these little bikes, so I was happy to oblige for our rider, Shane. The GN250 was in his family for a long time before we received it, and had been in storage for some time.”

PBM can run the full gamut of custom build styles, from mild to wild. But for this little scrambler, their goal was something clean and functional.

“The idea was to firstly improve on our previous builds, but most of all keep this project painfully simple. Oftentimes with our builds there are a lot of ideas flying around, and we get super excited then start making weird and wonderful custom pieces to style the thing out. This time there was a constant reminder to keep it simple, as a creative exercise if nothing else.” 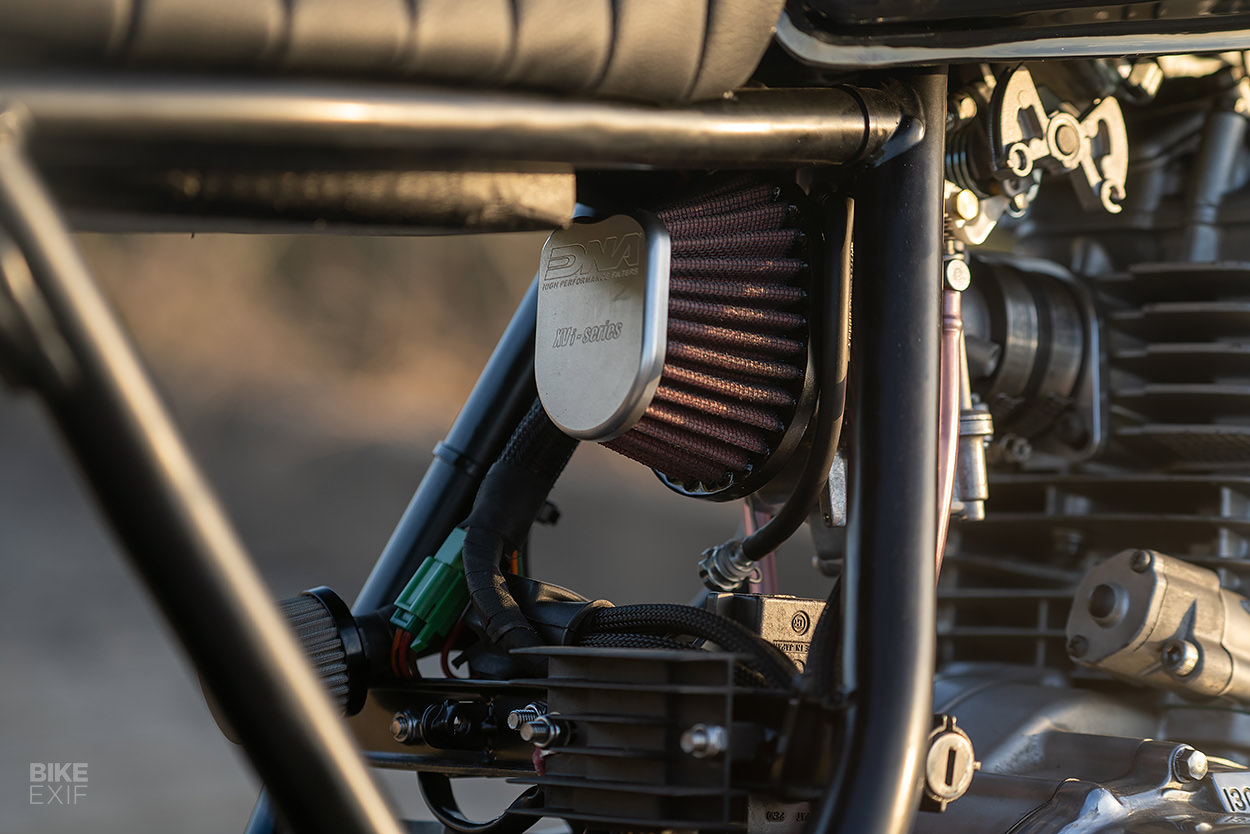 Nothing could happen until the well worn donor was brought back up to spec. PBM’s in-house mechanic rebuilt the little single with new pistons, rings, valves and springs, and some light porting work on the head. A new Mikuni carb and a DNA air filter were added to the mix too.

For the exhaust, PBM wanted to inject a little motocross style. So they mated an FMF Powercore 4 muffler to the two-into-one headers. 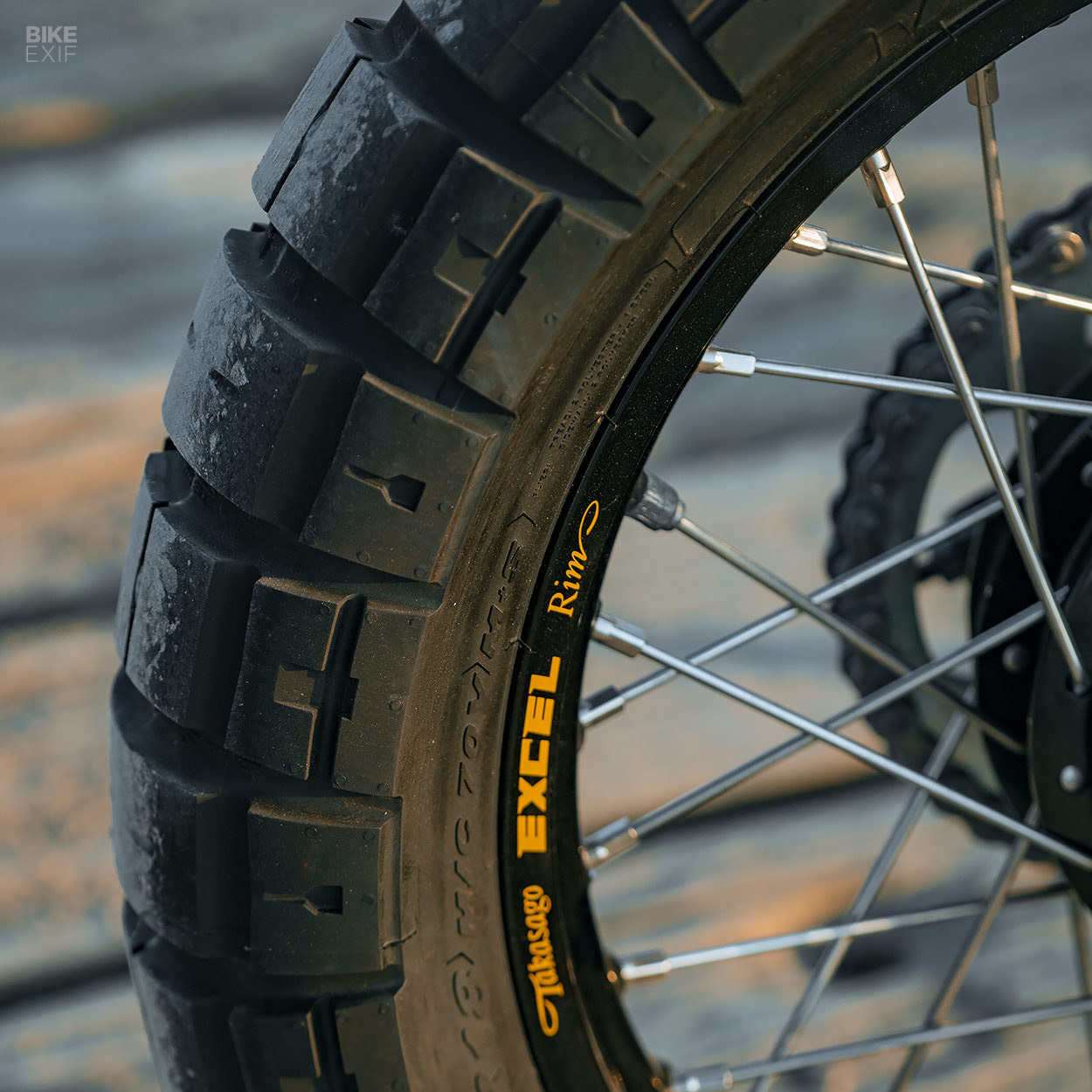 Next up, the crew focused on tweaking the GN250’s running gear. The bike’s stock 16” rear wheel limits off-road tire choices, so they laced up a set of 19F/18R Excel rims with stainless steel spokes. “It gives the GN a real dune buggy vibe and allows us a tone of tire options,” says Tom.

A set of Pirelli Scorpion Rally tires were spooned on, ticking all the boxes for road and dirt use. 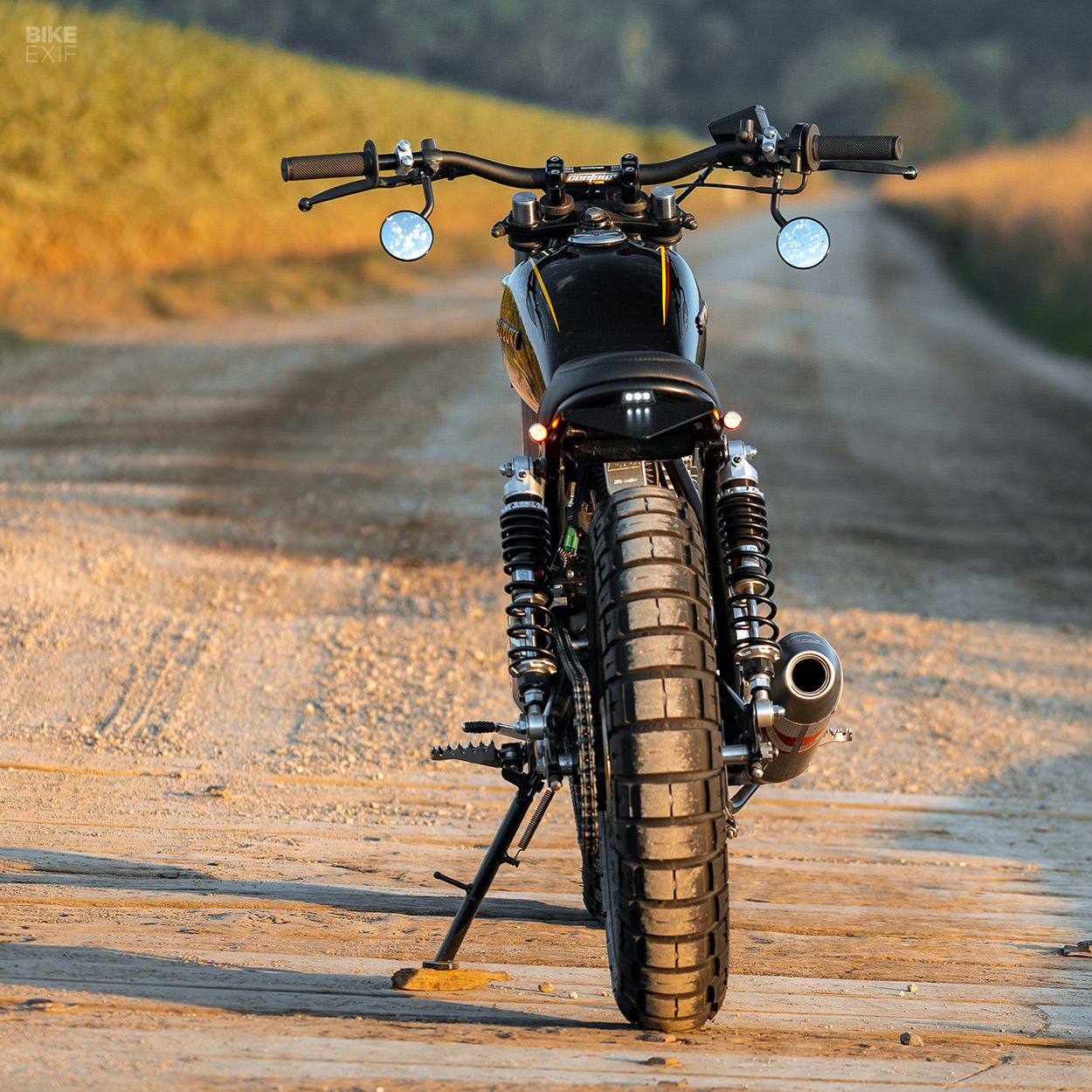 To compensate for the bigger wheels, PBM installed a pair of longer-than-stock YSS shocks out back. That change threw the rear drum brake out of alignment—so mods had to be made to ensure it still functions safely.

The front suspension was stiffened up, and refurbished with a heavier grade oil. Finishing off the front end are a handmade front fender and bracket, that are basically stubbier versions of the factory design. 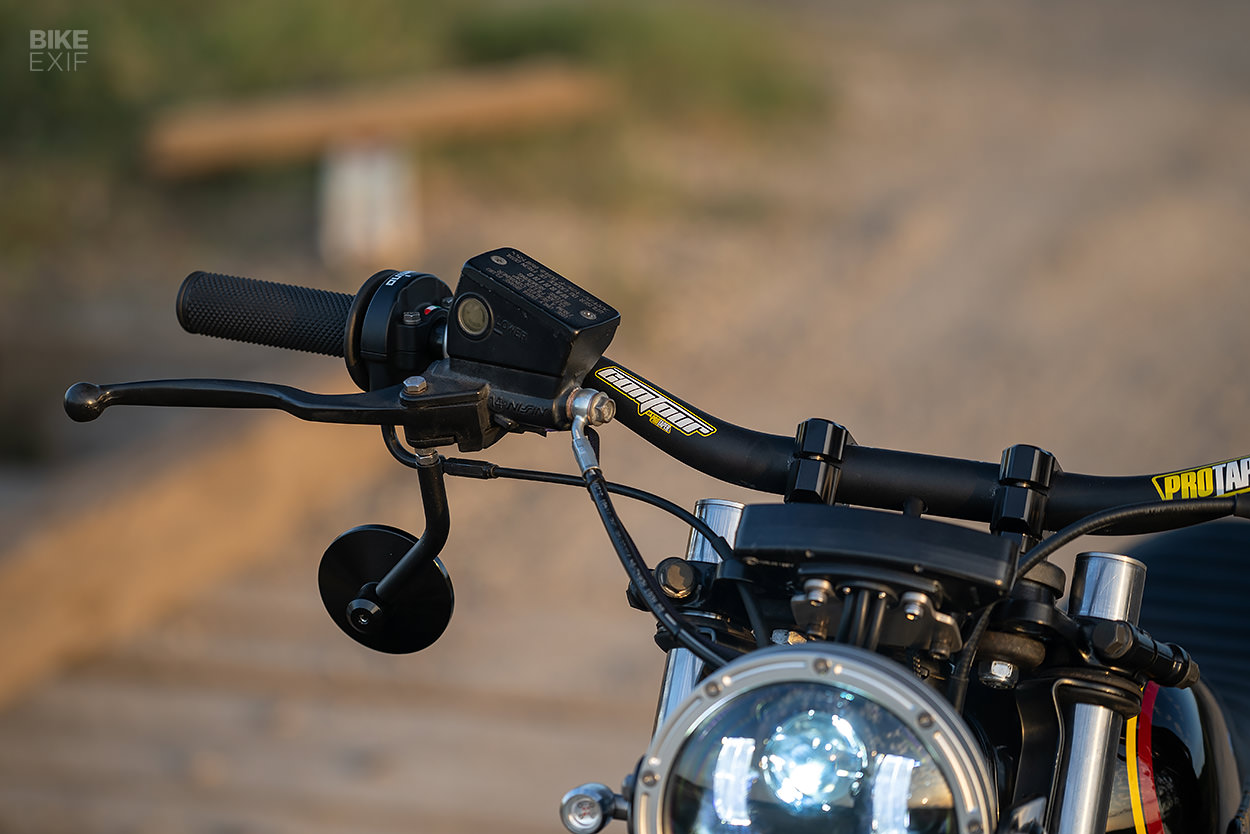 Higher up are an LED headlight and turn signals, and a digital Daytona dash, all from PBM’s own stock. The lights have actually been mounted on the OEM headlight mounts, but the dash sits on a handmade bracket.

The yokes have been cleaned up, and wear a set of ProTaper handlebars, PBM switches and reconditioned brake and clutch levers. The switches (and other electronics) run through PBM’s own ‘Moto Black Box’—a wiring ‘brain’ that’s tucked away under the seat. And the underslung mirrors are new parts that the team has just designed and added to their online store. 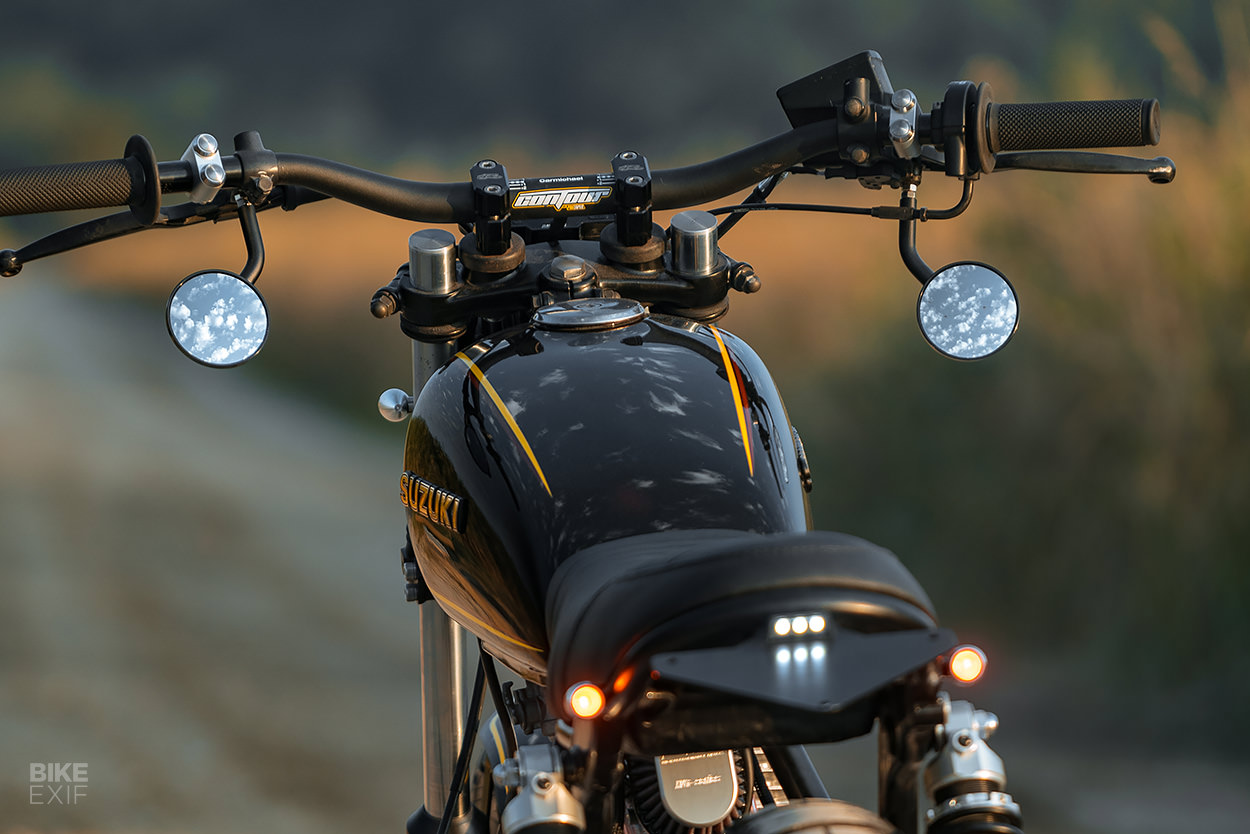 For the bodywork, Tom and co. opted to keep the stock GN250 tank, because it was in such great shape. So they simply tweaked its mounting brackets to line it up with their new tail section design.

The rear end of the bike is dead simple: a classic kicked up rear loop with a slim and short seat, covered in black leather. It’s flanked by LED turn signals that also act as taillights, and capped off with a small license plate bracket. Combined with the remounted tank, the vibe is simple—but effective.

The only major request that PBM’s client had, was the color scheme. “His family is from Papua New Guinea,” Tom tells us, “so he wanted to use the flag colors to style the GN250 out—which almost mimicked the factory paint anyway. Again, reminding myself to keep it simple, we used a black base and a two-stripe design in gold and red.”

The livery is as tasteful as the rest of the build. There’s nothing amplified here—instead, Tom and his team have distilled this little animal down to its essence. 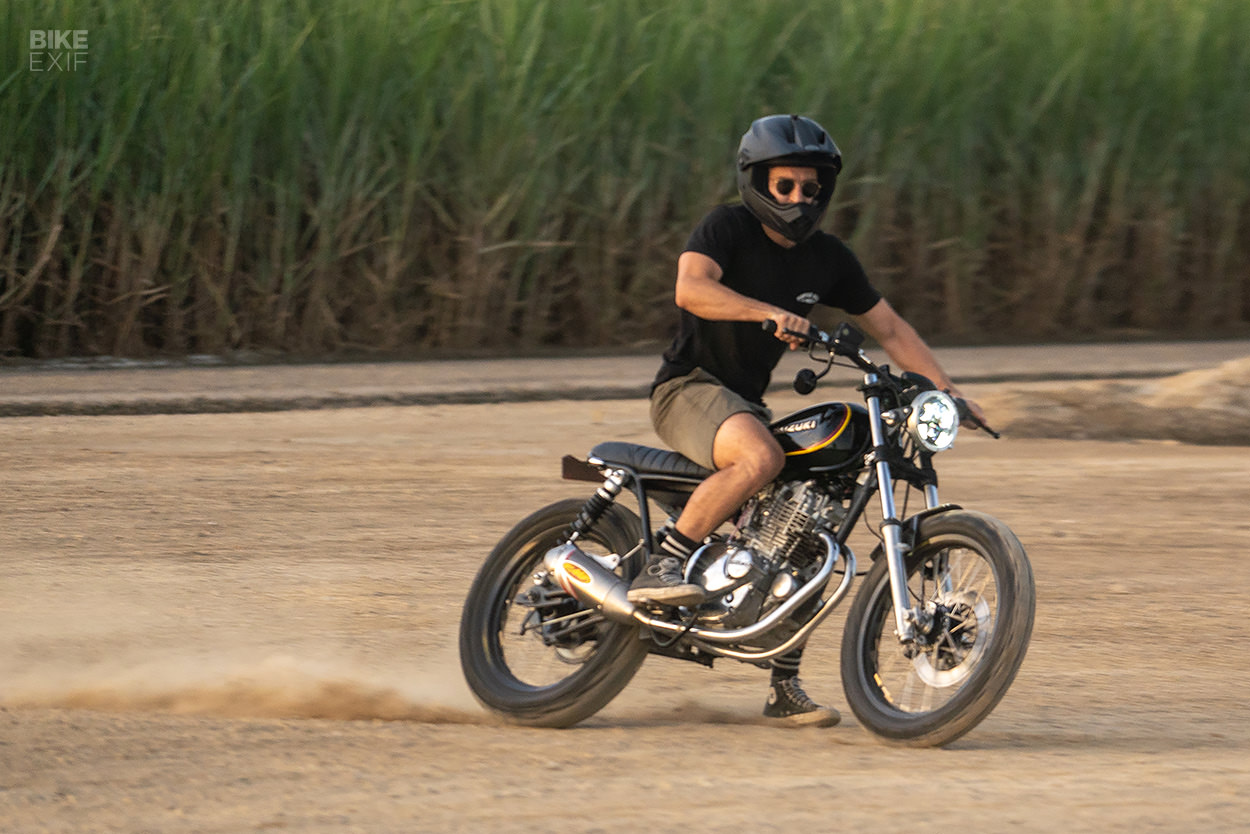 The real question is: what will PBM do on the next GN250 build? Tom’s not sure… but he’s hoping another one rolls through the door soon, so that he can find out.