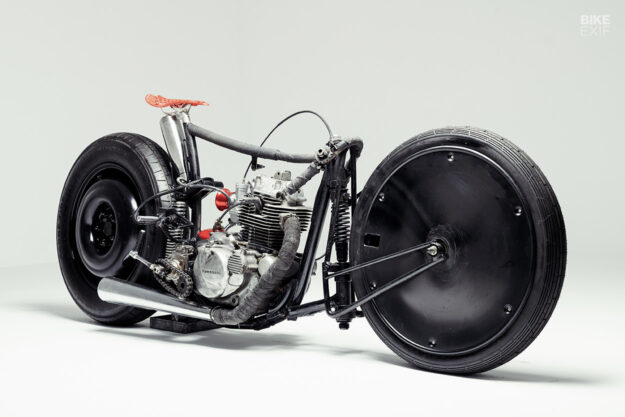 What do a Kawasaki KZ250 engine, a car’s spare wheel and a bicycle seat have in common? You’ll find them all on this curious contraption from Valen Zhou, along with a smorgasbord of other odd bits and pieces.

Straight out the gate, Valen admits that this build isn’t particularly practical—in fact, it’s downright sketchy. But he didn’t originally intend it to be this way. The Chinese-born, Milan-based photographer and director had a very specific mash-up of styles in mind, but once he got stuck in, things didn’t quite pan out. 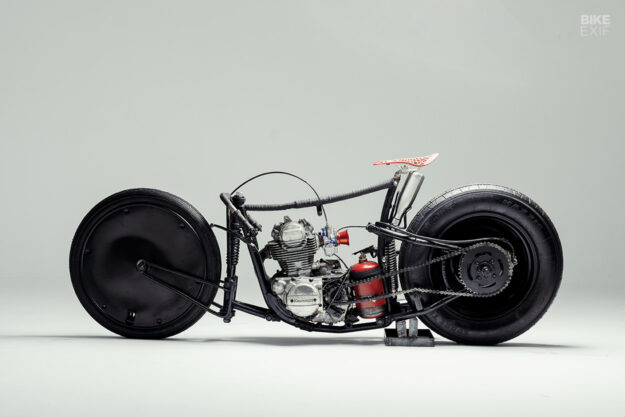 “The idea started many years ago, when I saw board track racing from the 1910s and 1920s,” Valen tells us. “Because I’ve always loved vintage bikes and motorcycle history, I was fascinated. But then I discovered drag racing, which made me feel the powerful charm.”

“I thought that if I could make a board tracker crossed with a drag bike, it would be super cool—even if it might not be possible.” 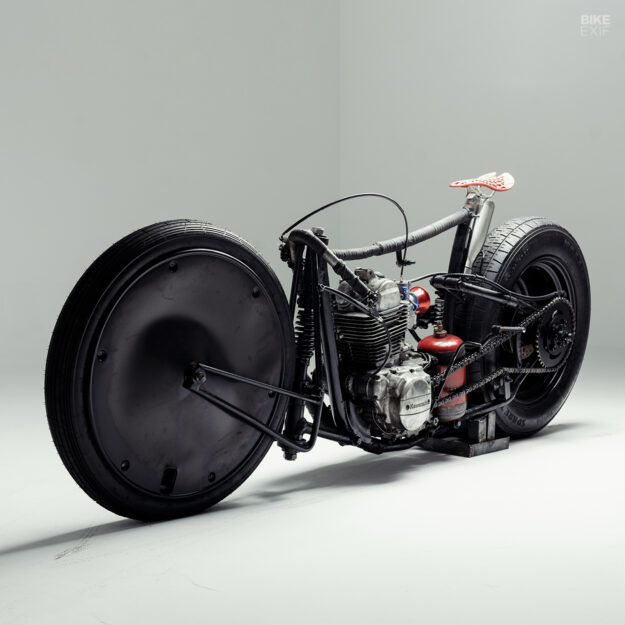 Valen had some ideas about how the frame should look, and how the steering should function. But it soon became apparent that things weren’t quite going to pan out. So he changed tack, and decided to treat the project as a concept bike of sorts.

“The entire motorcycle is actually my imagination,” he says. “It is my own concept bike. I am not a professional engineer or a real designer, but because I love motorcycles, I just want to realize my idsprintea—and I hope everyone who sees it finds it super cool.” 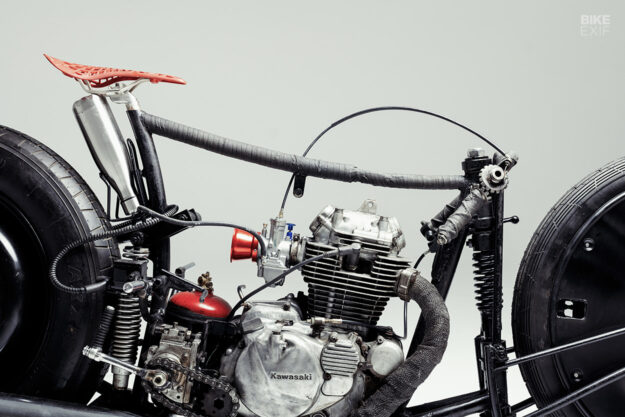 At the core of the bike is a handmade steel frame, built partially with jigs, and partially freehand. Most of the inspiration came from Valen’s road bicycle—which accounts for the custom-built dropped bars, and the bicycle saddle and seat post. The wrapping on the frame’s backbone is there to add extra grip while pushing the bike around.

For the suspension, Valen effectively made it up as he went. “I basically built the suspension freehand, just like playing with Lego,” he says. “It’s completely designed according to my own imagination, so there will be big problems, ha ha.” 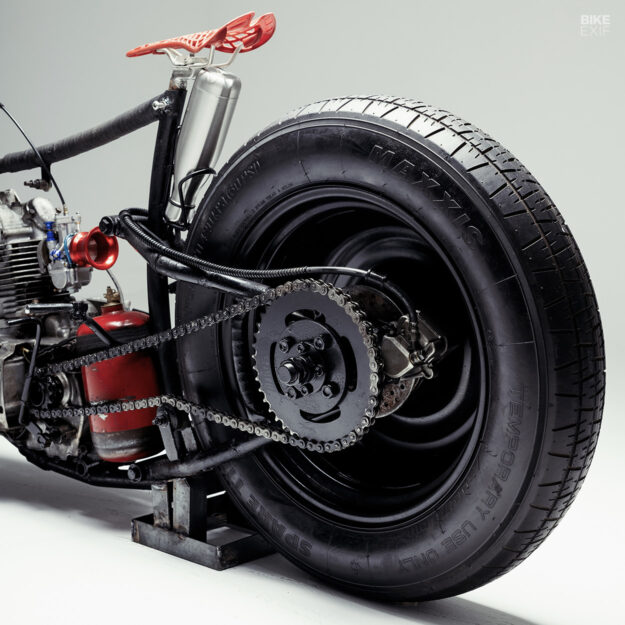 The front wheel comprises a Honda CG125 hub, a ‘regular’ motorcycle rim, and a pair of aero bicycle wheel covers. A half-size car spare wheel does duty out back, mounted to a single-sided swingarm. There’s only one brake; a repurposed motocross part at the rear.

At the heart of the build sits the motor from a Kawasaki KZ250—a 246 cc single that makes a modest 19 Nm of torque. The engine’s another reason that Valen changed direction on the project; its output would have been insufficient for the original chassis design that he had in mind. 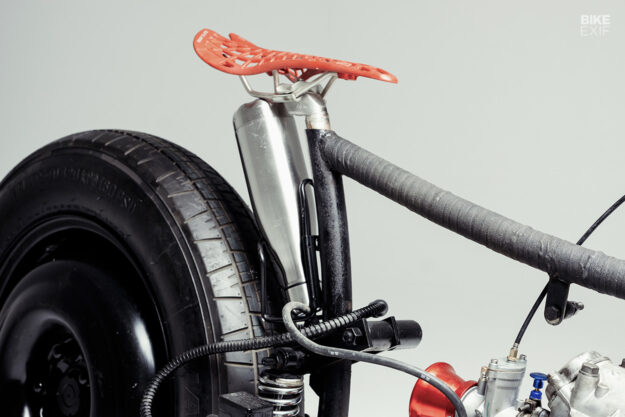 The Kawasaki mill is mostly stock, save for a new velocity stack and a custom megaphone exhaust. Fuel is stored in an aluminum bottle, mounted behind the frame’s seat tube in a bicycle bottle cage. “I designed it this way to save weight,” says Valen, “but it was also inspired by road bicycles.”

“You take it off and refill it, just like refilling a water bottle. Each bottle only holds 500 ml [about 17 oz], which is only enough for one run. So I prepare many bottles, and replace them after each run—just like athletes drink water.” 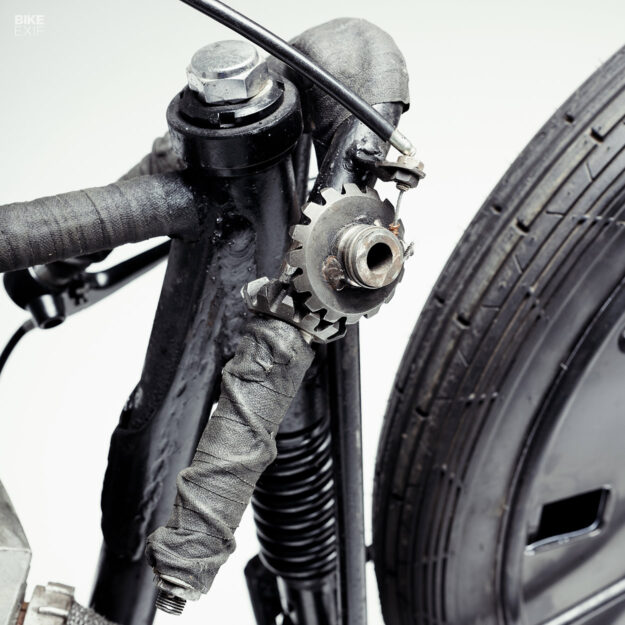 Valen’s sprint bike is loaded with eccentric details like this. On the handlebars, you’ll find a custom-built throttle that uses gears, and a reversed clutch lever.

If you’re looking for the foot controls, they’re way higher than you’ll usually find them. The riding position here is impossibly compact—much like a fixed gear or time trial bicycle.

“It’s not very comfortable,” Valen concedes, “but it feels like the wind resistance is very little. Your arms get particularly tired though!”

It seems like a waste to spend so much time on a project (it took literal years to complete), only to admit that it’s not particularly usable. But that wasn’t the point here. Now that Valen has let his imagination run wild, he has an arsenal of ideas spooled up for the next bike—and he’s well aware of what works, and what doesn’t. 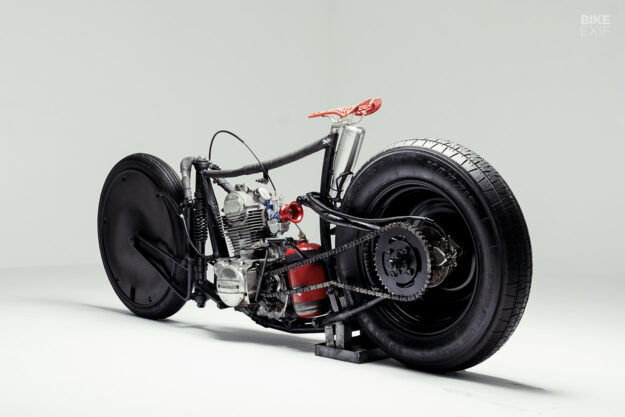 “This motorcycle took a long time from idea to completion,” he adds, “and it is also my favorite one. Although it has many problems and cannot be driven on the road in a real sense, everything about it represents my knowledge of motorcycles… and my love for them.” 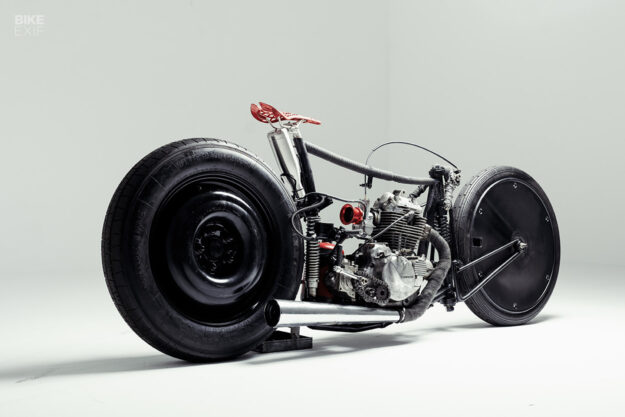