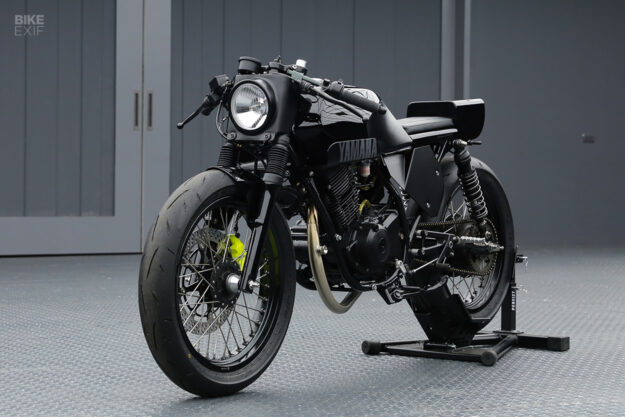 Made in Taiwan and only sold locally, the Yamaha SR150 was a hit among commuters and delivery riders. But it was a bike bought for its affordability and practicality, not its looks. Resembling the legendary SR500 only in name, the stock SR150 looks just like you’d expect a delivery bike to; blocky and bland.

That hasn’t stopped workshops in Taiwan’s blossoming custom scene from tearing into the snack-sized SR to make it easier on the eye. And this stunning SR150 café racer shows just how much potential the donor bike has. 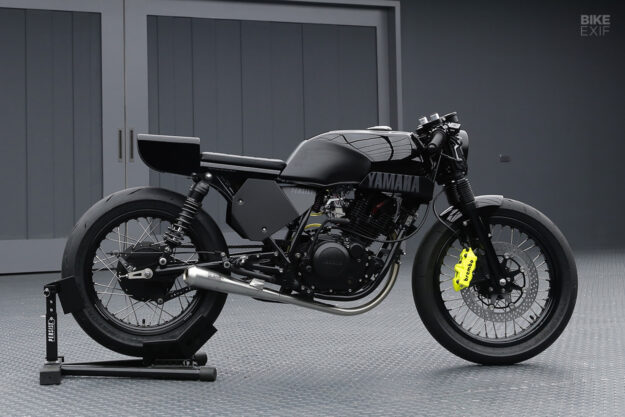 It’s the work of Twentytwo Custom, the custom branch of the Taiwanese motorcycle culture and apparel brand, Persist Motorcycle Company. When Twentytwo first opened shop, they promised themselves that their fifth build would be an internal project. This is that build.

“The owner of this Taiwanese-made Yamaha SR150 is one of our own staff members, Red,” explains Twentytwo founder, Dong Lin. “She has been in charge of the design business at Persist for nearly three years. Most of our visuals come from her designs.” 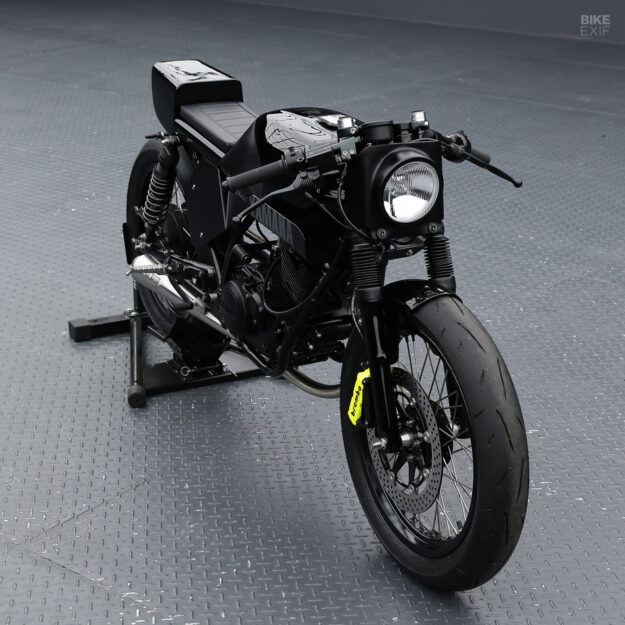 Given her sharp eye and her role in the company, Red obviously had a lot to contribute to the design. “Twentytwo ’05’ is an attempt to fuse and pay tribute to all her favorite things,” says Lin, “like sci-fi movies, cyberpunk comics and 90s JDM street racing cars.”

“Out of nostalgia, and a passionate love we have for this domestic-made model, finding a way to preserve the soul of its original look was an extra challenge we set for ourselves. We deliberately kept the original fuel tank, and kept the modification of the main frame to a minimum; hoping that through its brand new appearance, the original silhouette of the Yamaha SR150 could somehow still be seen.” 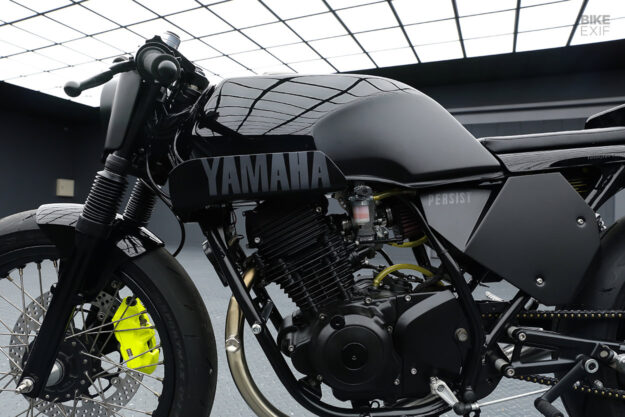 The project was quickly dubbed ‘Neo Nostalgia,’ and work was underway. Straight out the gate, Twentytwo roped in fellow Taiwanese shop and frequent collaborator, Tough Tracker, to handle all the metalwork on the project. Together, they transformed the SR150 from daily beater to slick café racer.

With the OEM fuel tank in place, the crew set about fabricating a set of body panels to give it a sharper edge. Up front, a set of ‘winglets’ were mounted to the sides of the tank to give it a more modern, sporty vibe. Further back, Tough Tracker made a pair of origami-style side panels out of aluminum. 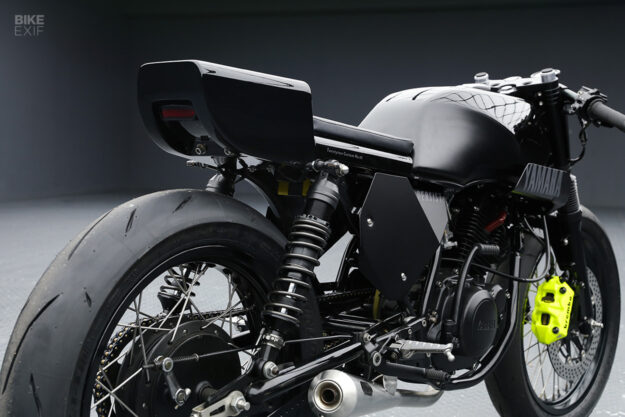 The tail unit looks basic, but it’s actually made up of multiple pieces that can be disassembled. “For the shape, we pulled references from 90s Japanese sport bikes—then tried to build a single seat piece that goes well with the SR150 tank,” Lin explains. A simple LED taillight is tucked in under the rear hump.

Up front, Twentytwo and Tough Tracker decided to eschew the typical bubble fairing style for something a little more aggressive. A relatively shallow 6” headlight sits inside a hand-made nacelle, designed to fit tightly with the forks and yokes. 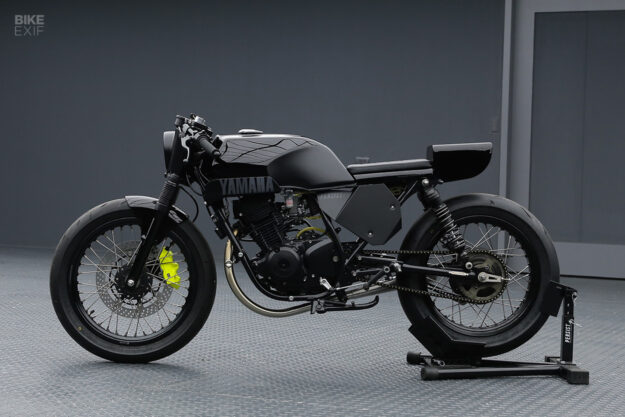 A bone stock Yamaha SR150 is hardly going to set the streets ablaze, but Lin was adamant about injecting at least some performance into the humble single. Starting with the suspension, Twentytwo installed a set of modified SYM Wolf 125 forks up front, with the yokes from a FZ-series Yamaha. The rear shocks are from MJP Factory, while the extended swingarm comes from Mark Motorcycle.

The wheels were swapped out for an 18F/17R set, shod with respectable Dunlop Sportmax rubber. A single Brembo caliper adds an extra hit of braking performance. 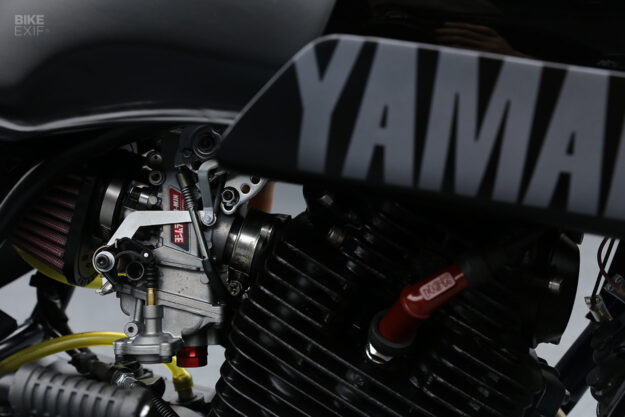 Not one to neglect the engine, Lin tasked Performance B in New Taipei City with rebuilding the Yamaha single. It’s been bumped to 230 cc, with a retrofitted Yamaha TW225 cylinder head and an upgraded cam shaft. Performance B also did some porting work, strengthened the crankshaft and installed an upgraded connecting rod.

There’s also a Yoshimura Keihin FCR-MJN28 carb, fitted with a K&N filter, and a reinforced clutch. The stylish exhaust system comes from another local outfit, Banai. Its flowing form was a deliberate choice, to counterbalance the blockiness of the bodywork. 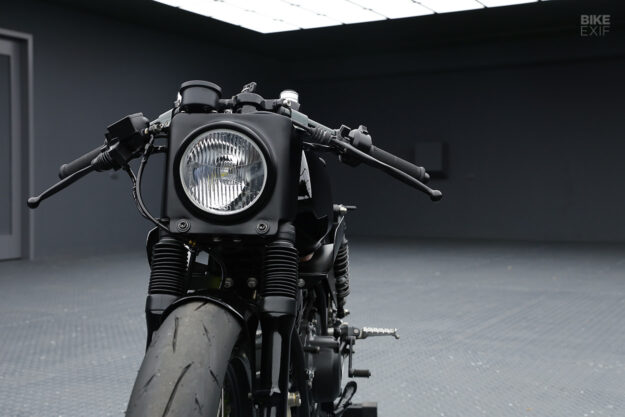 Finishing off the build are a bunch of subtle and tasteful changes. A set of clip-ons and a Daytona speedo do duty in the cockpit, with new foot pegs mounted lower down. Twentytwo also trimmed the subframe, and rewired the bike.

“Imagining that this is a motorcycle that could appear in a sci-fi movie, we used both shiny and matte black, and gray, as the color palette,” Lin tells us. “Then we deliberately blacked-out other parts of the bike, so that the neon yellow Brembo caliper would pop and act as a visual highlight—bringing out the florescent, JDM-ish vibe.” 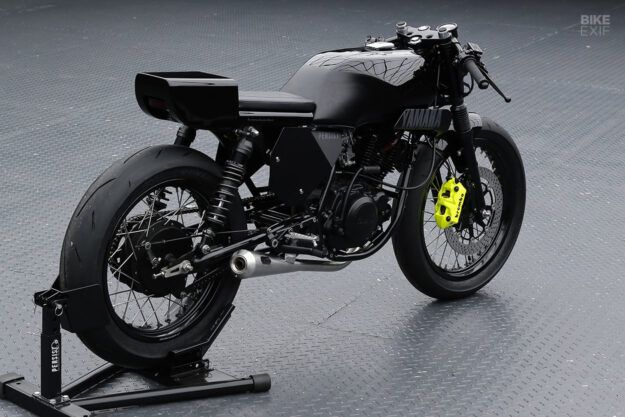 With a boost in performance, ultra-modern looks and suspension adjusted for her weight and riding style, Red now has a daily runner that we’re more than a little envious of. Who ever thought a delivery bike could look this good? 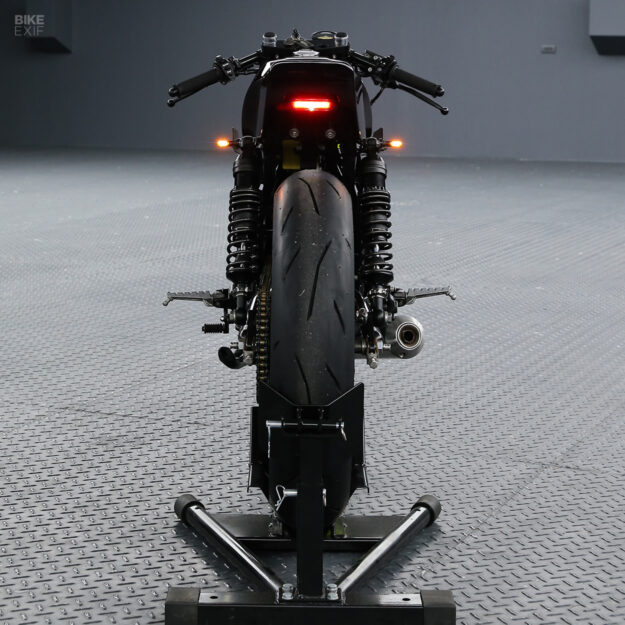