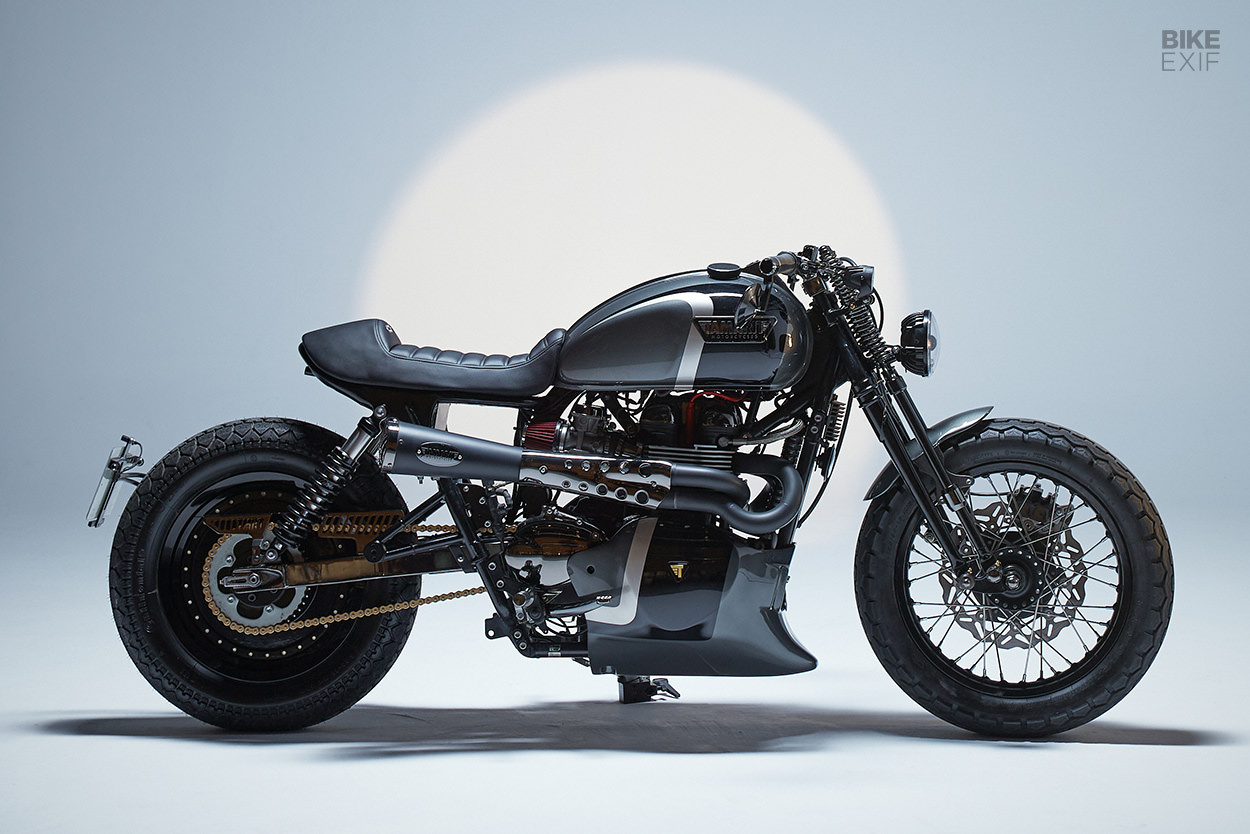 Some of the most prolific custom shops out there have found success by settling on a winning recipe, then replicating it countless times. But the real trick is to find new ways to riff on the same style, so that it doesn’t become stale. And Tamarit Motorcycles has that down to an art.

Sure, if you browse their portfolio you’ll see a common thread; unavoidable, since they specialize in Triumph customs and produce a plethora of bolt-on parts. But you’ll also see a clear progression. The Spanish shop is over 100 builds in, and they’re still finding new ways to do things. 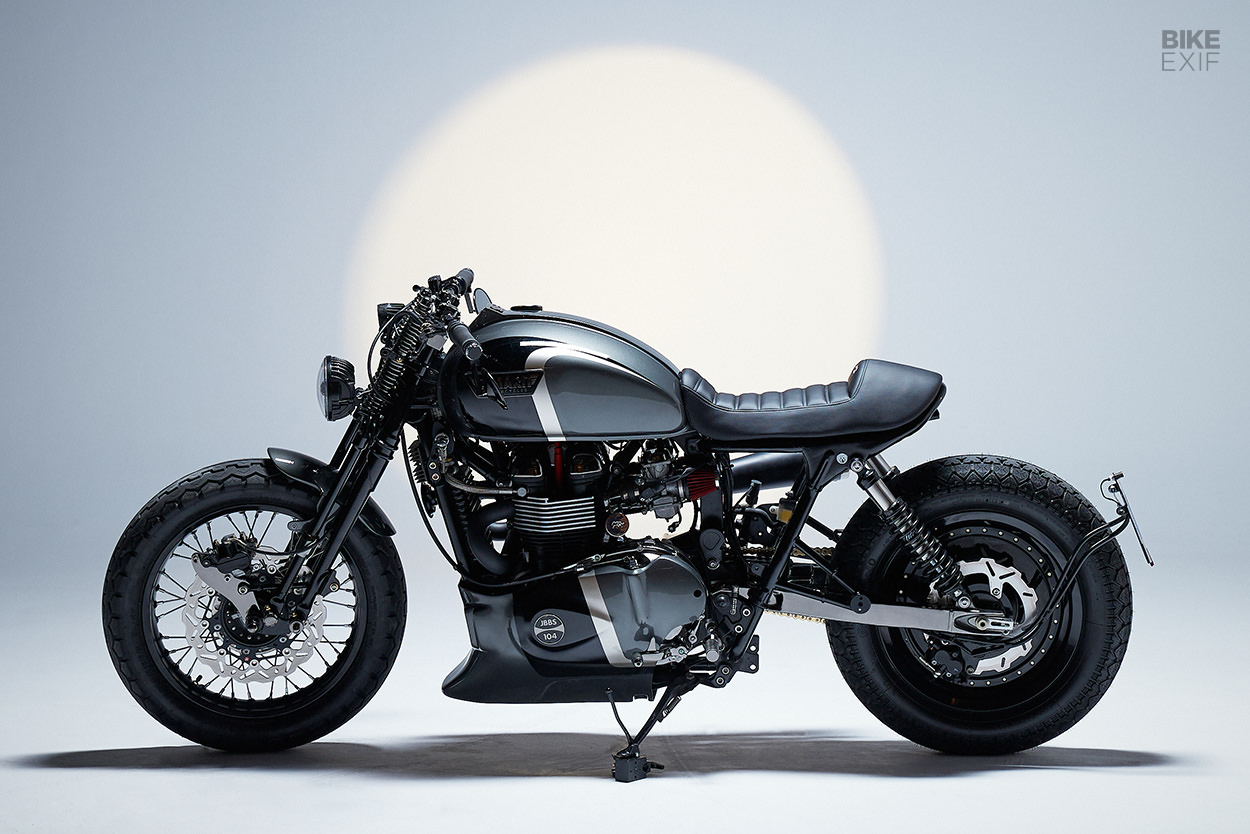 Their 104th build, a Triumph Bonneville dubbed ‘JBBS,’ testifies to this. Take it apart, and you’ll quickly spot ideas that have been borrowed from their previous builds—but put it back together, and it stands on its own.

Based on a 2008-model Triumph Bonneville T100, JBBS was built for a client in sunny Mallorca—a part of Spain where multiple Tamarit builds reside. The brief was wide open, so Tamarit proposed a few ideas, all of which were accepted enthusiastically. They’re calling it a café racer, but we’re picking up a strong bobber undercurrent too. 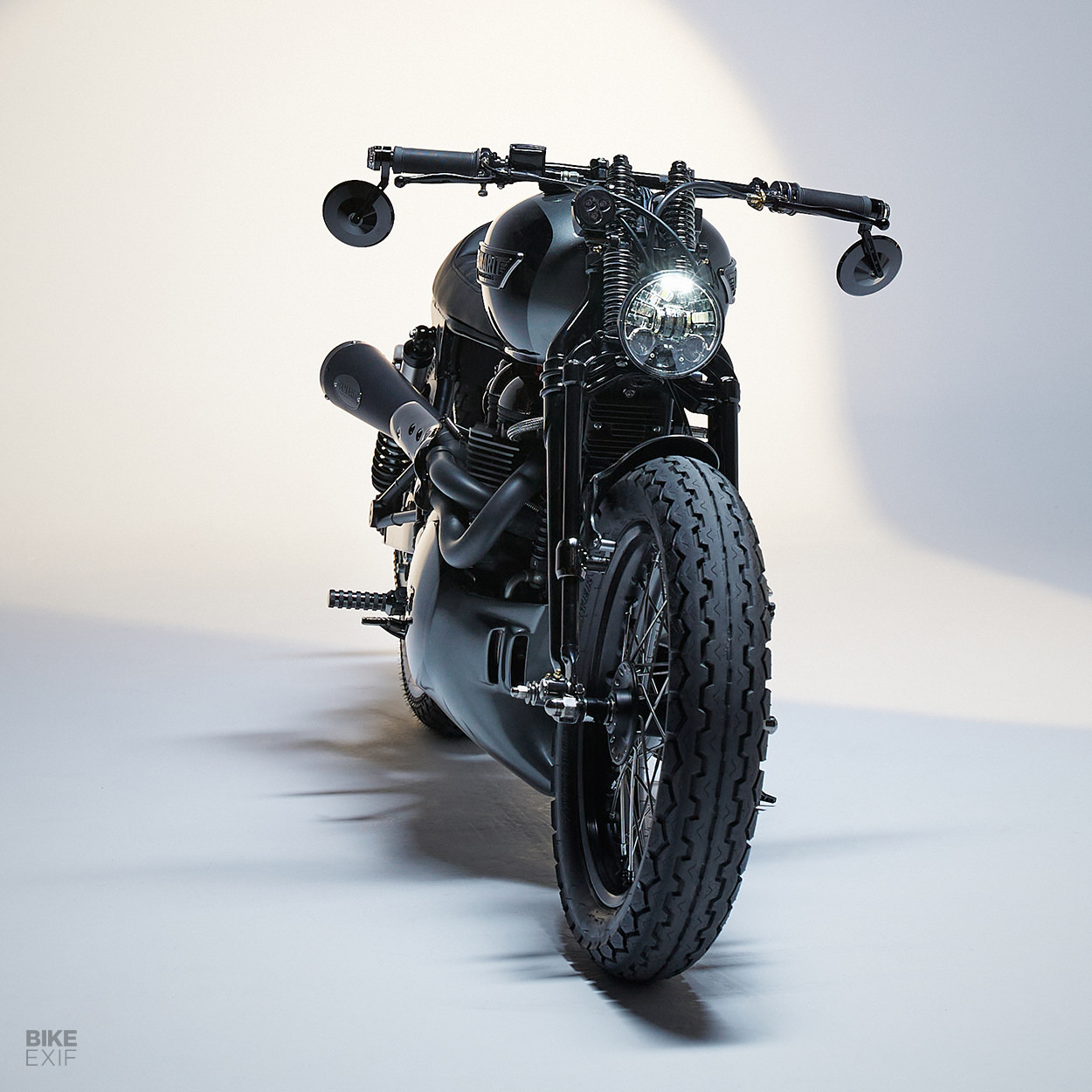 For starters, this 14-year-old Bonnie sits lower and longer than it did from the factory. It now rolls on 16” spoked wheels, wrapped in Dunlop Roadmaster tires that are chunky without being cartoonish. Custom-made discs enclose the rear wheel, making it look heavier than it is.

Up front is an aftermarket springer fork, originally designed for a Harley-Davidson. Tamarit picked that particular model because it was stronger than most, then modified it to work with the Triumph. The mods included a custom mount for the front brake caliper, and a stubby front fender. 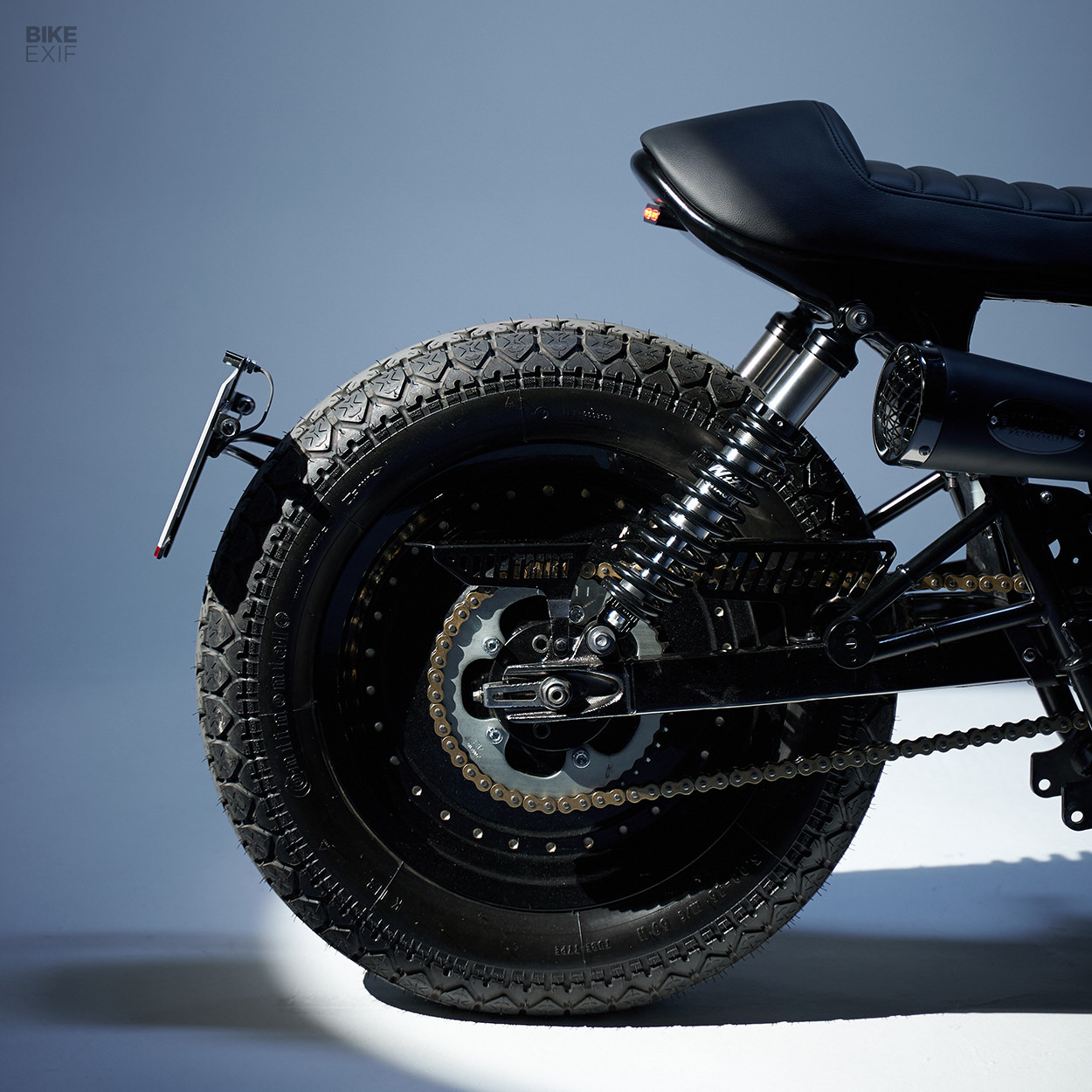 Out back, the team extended the swingarm and installed a pair of Hagon Nitro shocks. The subframe was trimmed and looped, then closed off underneath with a custom blank-off plate. It features an integrated housing with a pair of LED taillights.

Up top is a café racer style seat that loosely mimics some of the designs in Tamarit’s catalog, but was built as a one-off for this bike. It’s covered in marine-grade vinyl, with a neat Tamarit badge riveted into the cover. 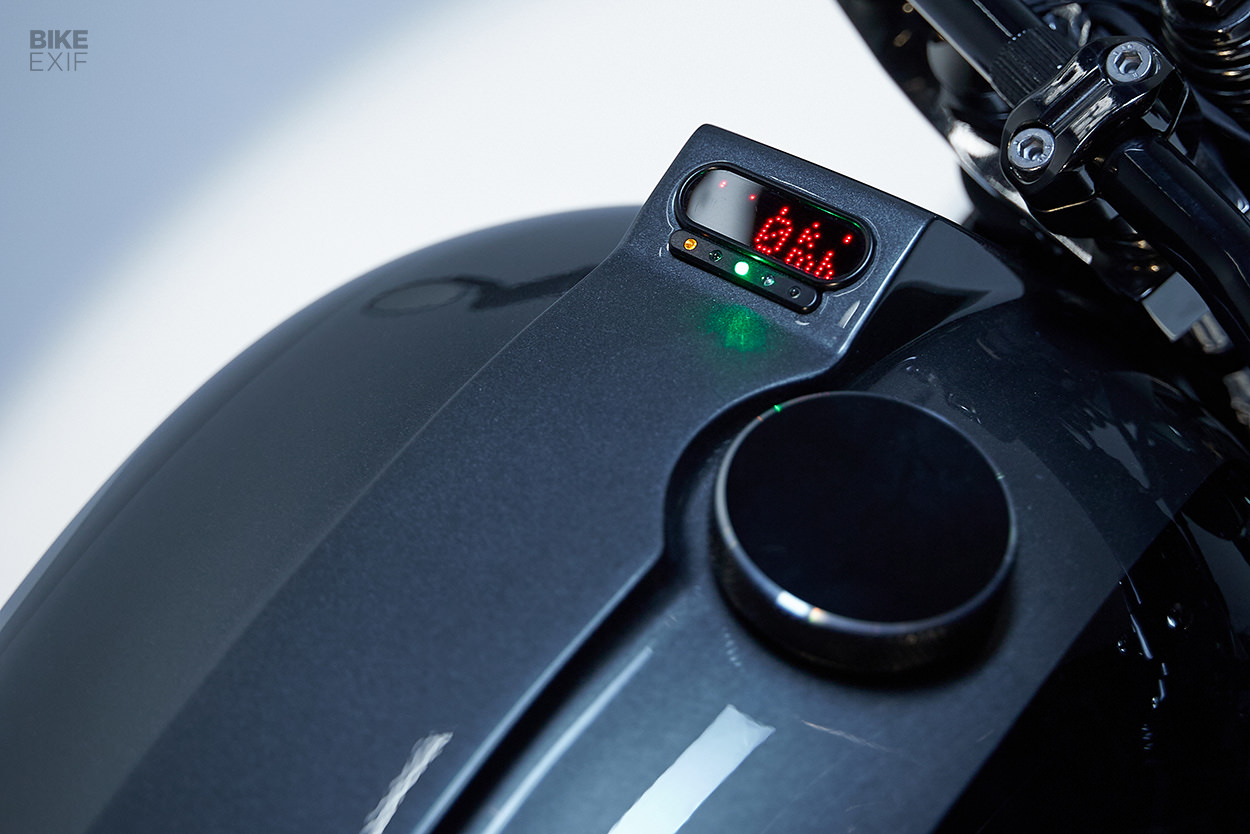 Just in front of the saddle is the Bonneville’s OEM fuel tank, with a few tasty mods. Keen eyes will spot an aftermarket fuel cap, and slick Tamarit badges that are finished in black and chrome. But peek up top, and you’ll notice a handmade ‘strap’ running over the top.

Shaped out of metal, it’s welded to the tank and doubles up as the housing for a tiny digital speedo from Motogadget, along with a strip of LED warning lights. It’s a clever trick that helps keep the cockpit impossibly clean. 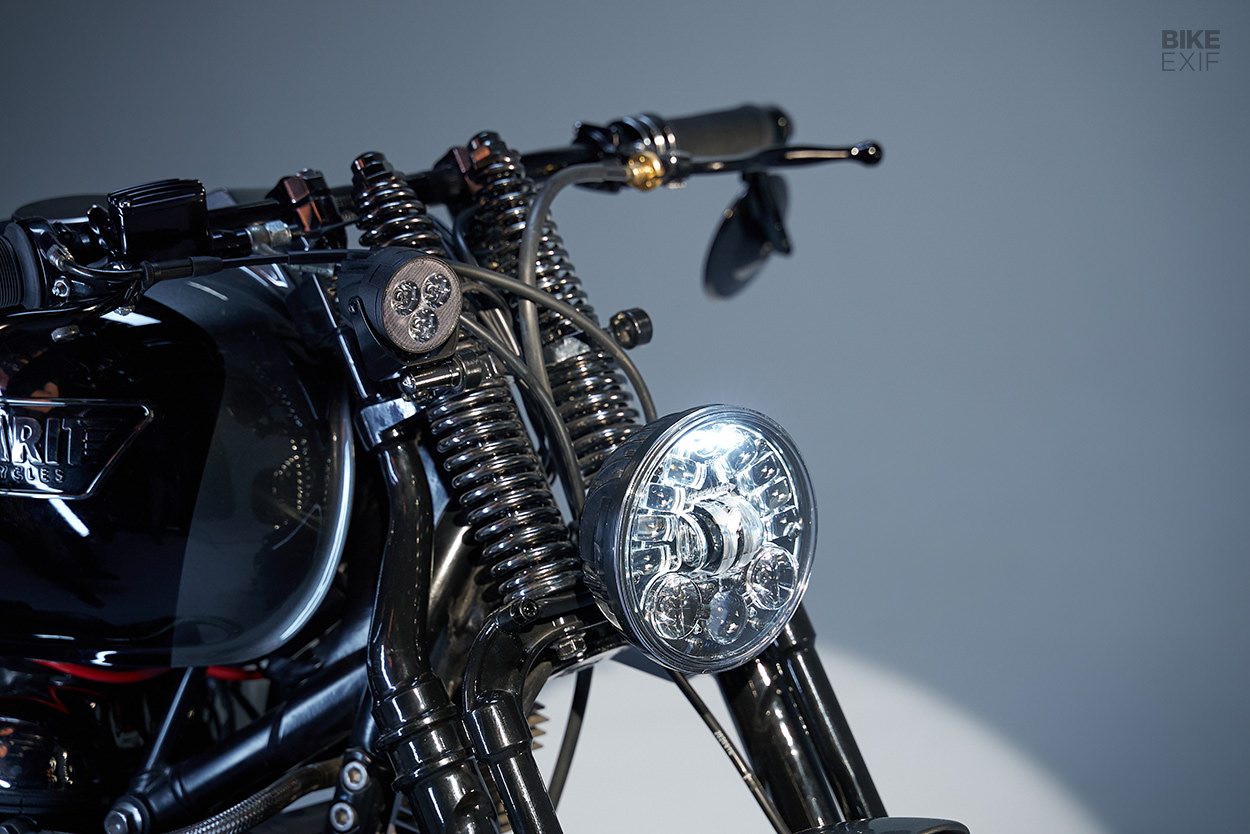 Located at the fore are Tamarit risers, gripping a chunky set of drag bars. They’re fitted with Biltwell Inc. grips, along with a new throttle and levers. The micro-switches, bar-end LED turn signals and mirrors are all Motogadget parts—as is the Bluetooth-capable control box around which the whole bike’s been rewired.

Lighting is by way of an adaptive LED headlight, with an auxiliary LED mounted higher up. (If you’re not yet familiar with adaptive headlight technology, it ‘shifts’ the focal point of the light as the bike leans through corners). 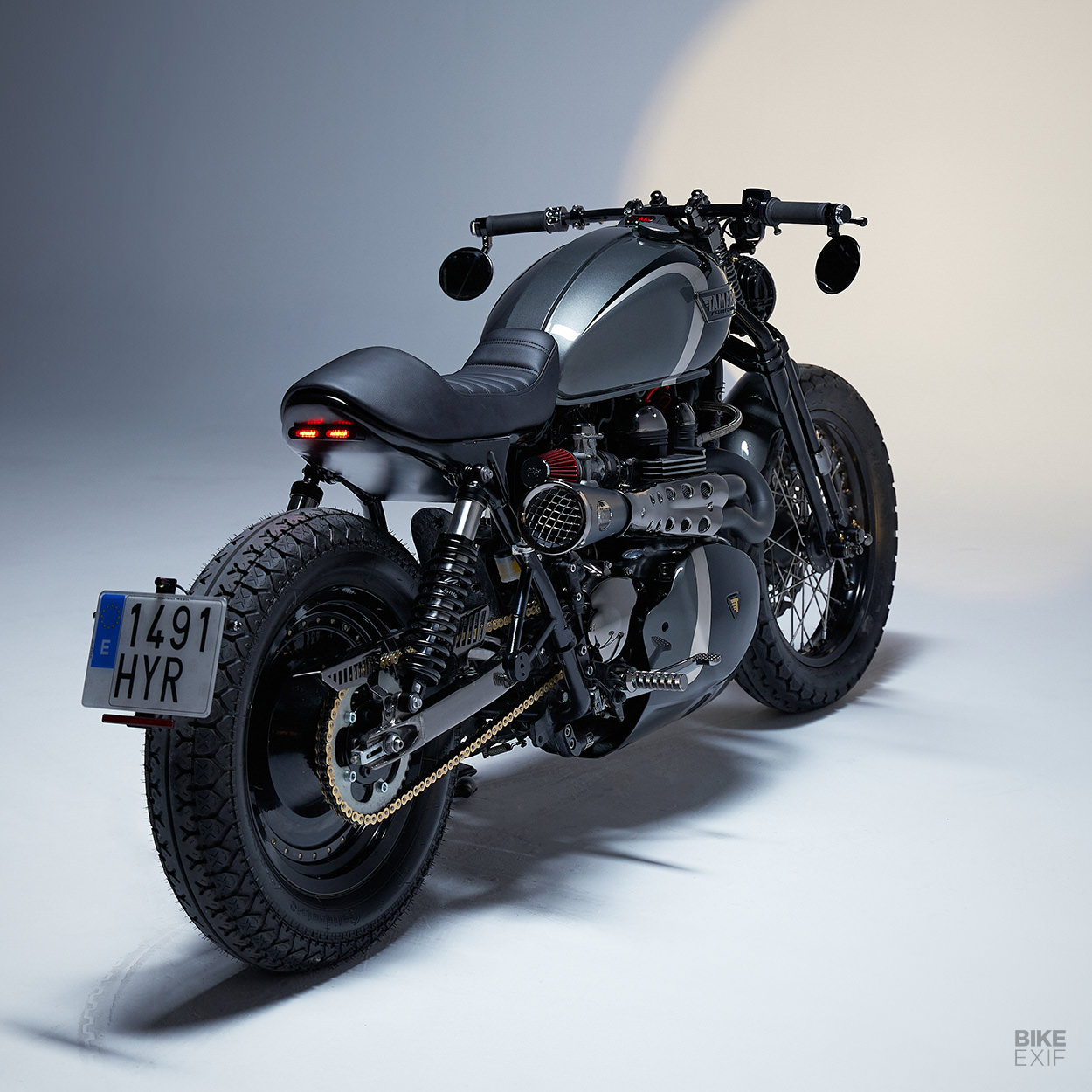 Hanging off the side of the Triumph is a stunning two-into-one exhaust system, made specifically for Tamarit by the Italian exhaust specialist Zard. The team deleted the air box too—and treated the engine to a thorough once-over, as they do on all their projects.

Other changes include new foot pegs, a Tamarit chain guard, and a swingarm-mounted license plate bracket. 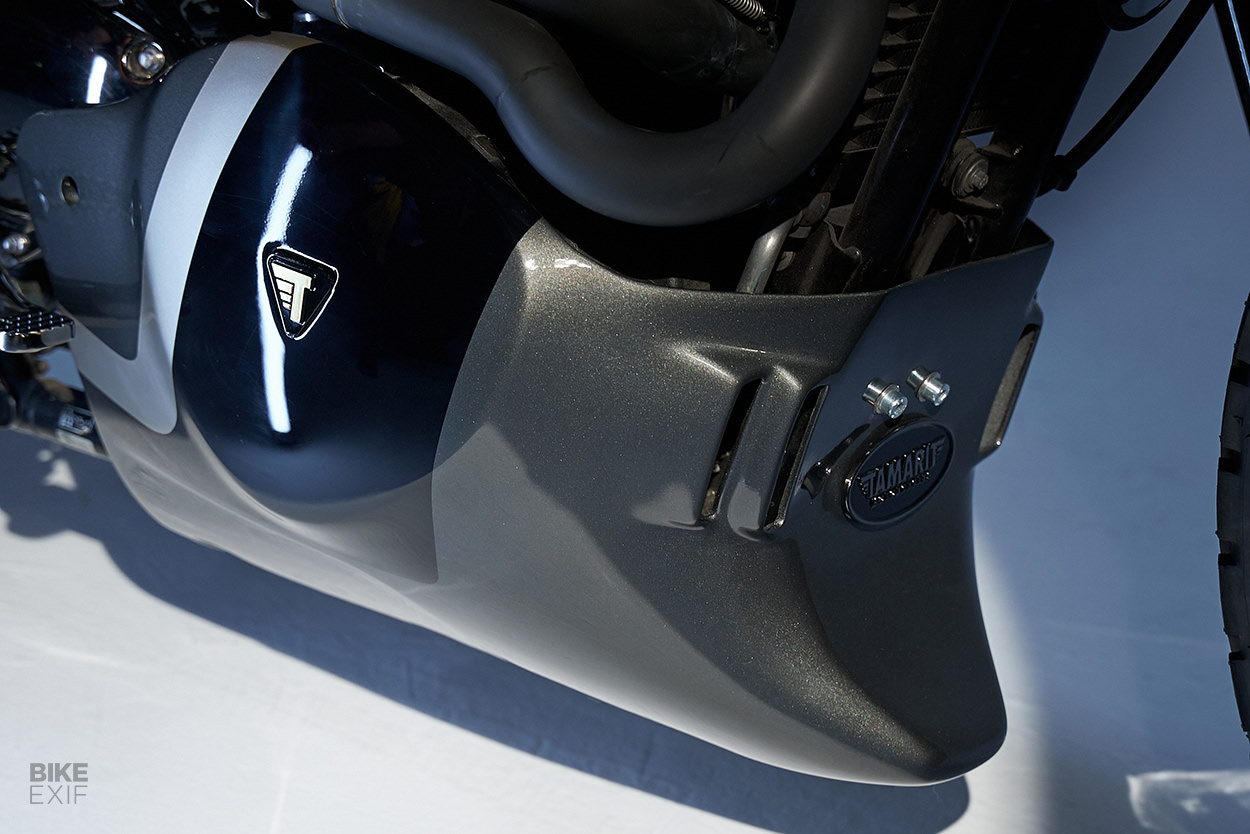 The generous belly pan might look familiar, because it’s the same design that Tamarit used on their recent Triumph Thruxton café racer. The first unit was originally made by sculpting clay to create a mold—but that mold now exists, so this one was marginally easier to produce. Shaped out of fiberglass, it uses an asymmetrical design that wraps around the engine while shadowing its curves.

Top marks to Tamarit for using that extra real estate to execute a stellar livery too. Their client wanted a red bike at first—but the second the shop pitched this monochromatic scheme at him, he loved it. And it’s easy to see why. 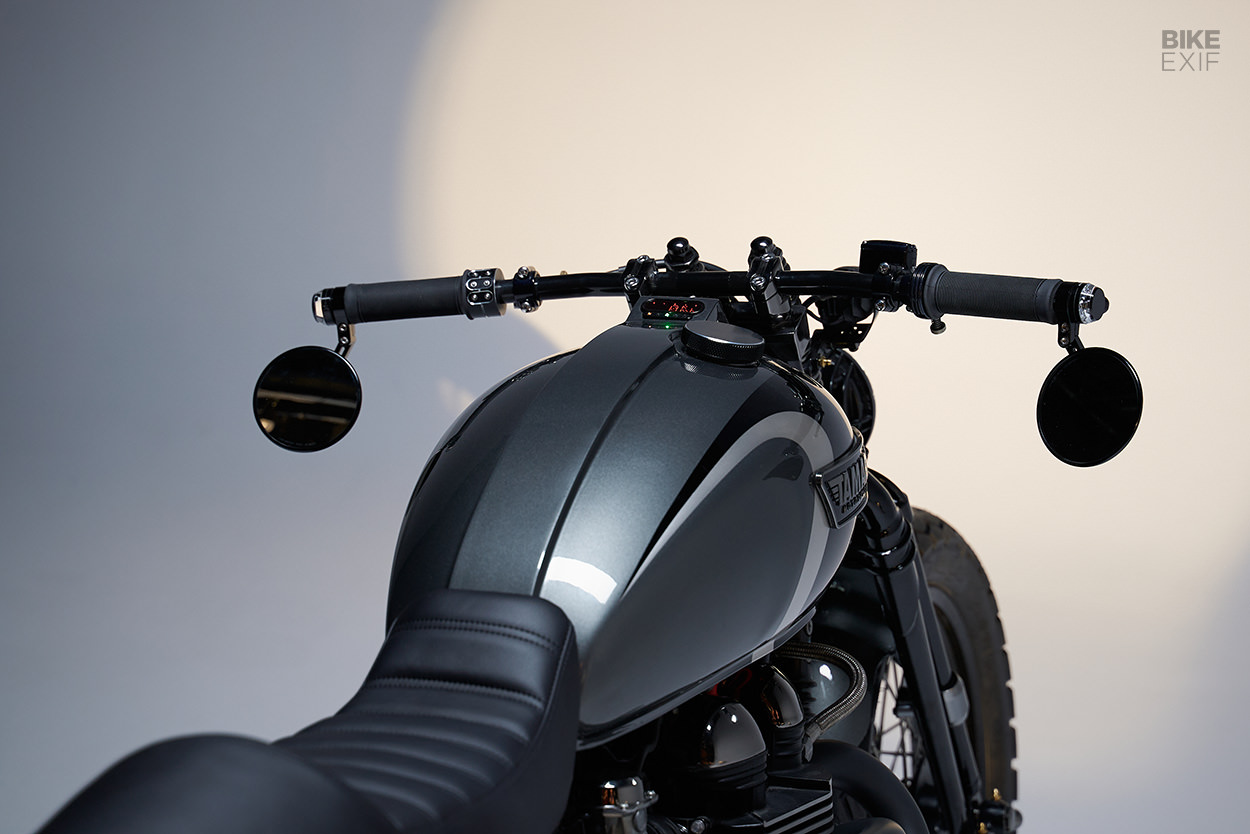 104 builds in, Tamarit still knows how to keep things fresh. And if this Bonneville is a sign of what’s to come, they should be in good shape for quite some time still. 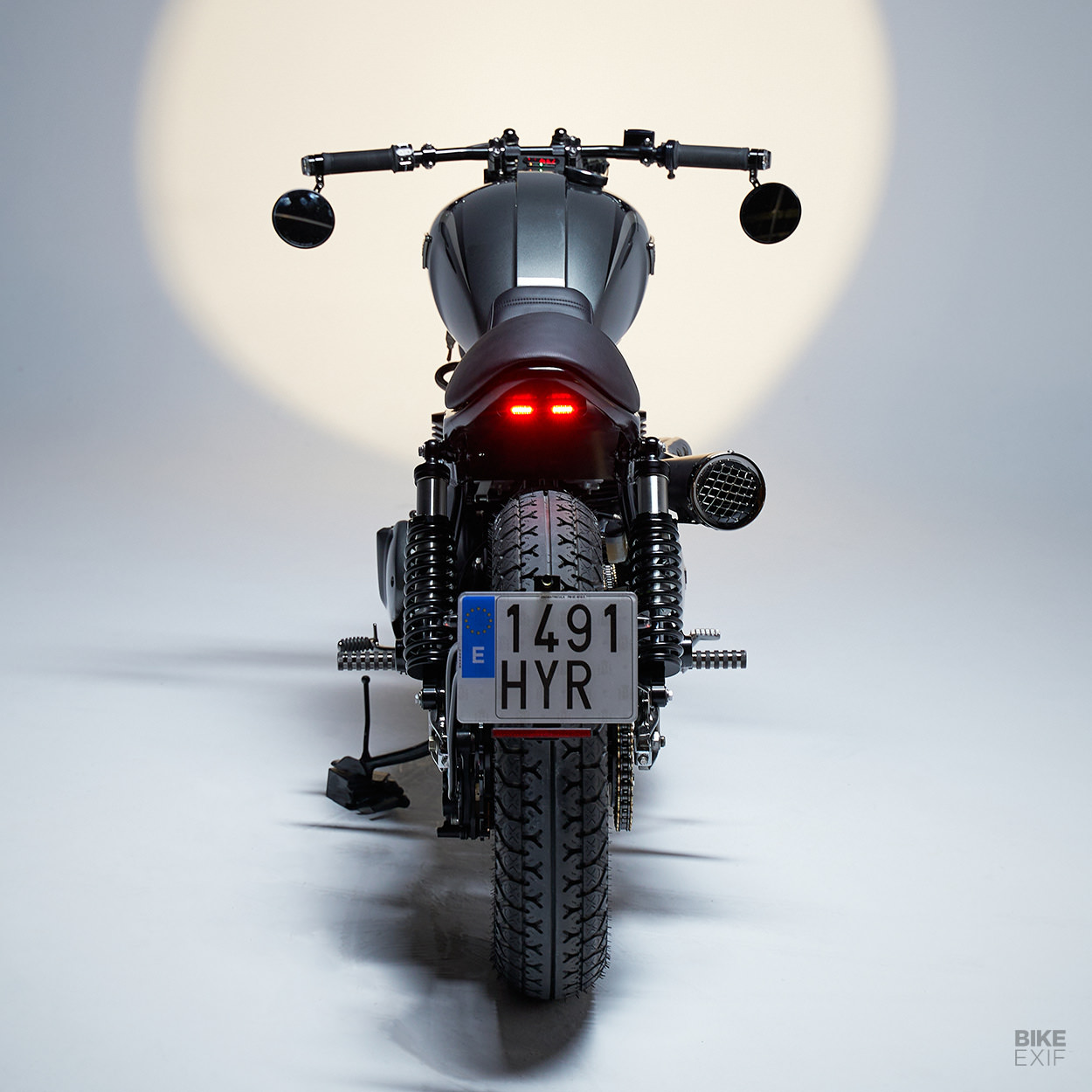