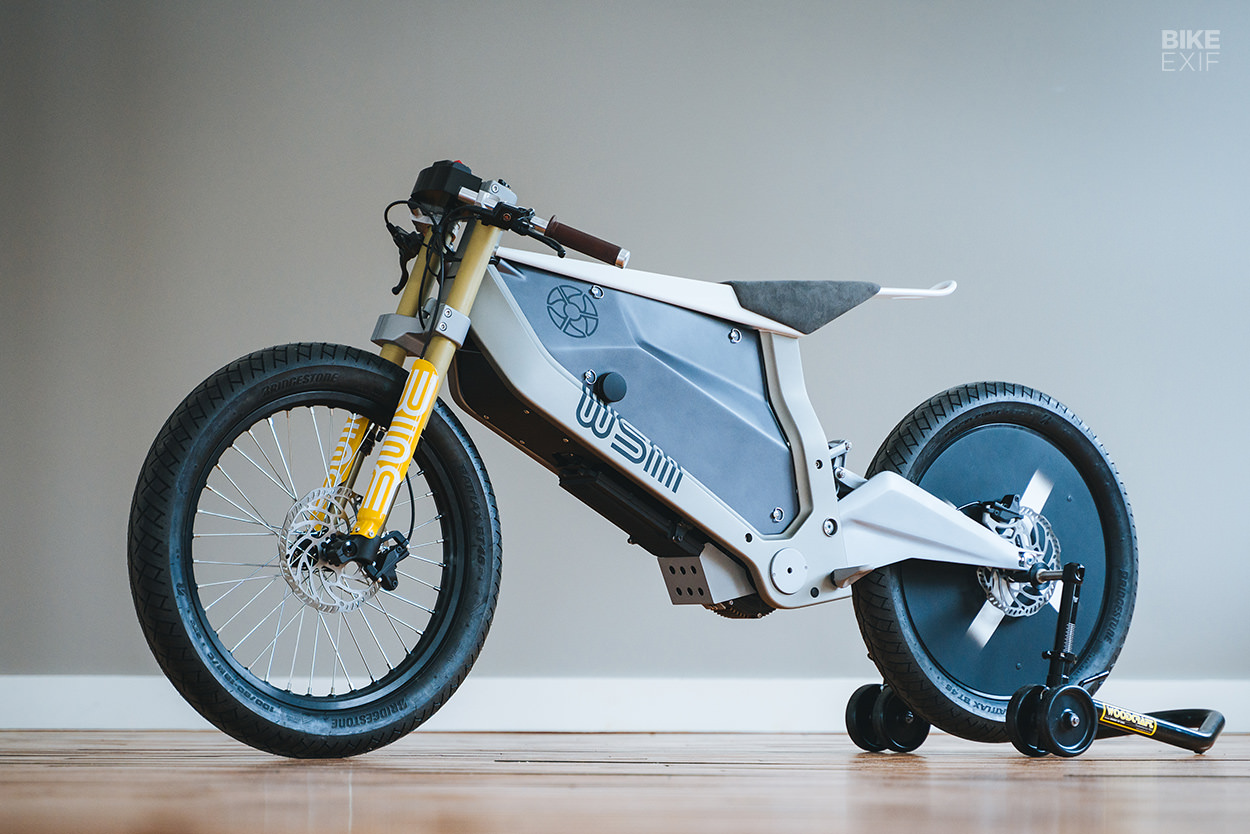 The world of electric motorcycles is, in many ways, still finding its feet. With full-blown electric motorcycles at one end of the spectrum and pedal-assist bicycles at the other, there’s a huge middle ground where imagination can run wild. And that’s exactly where Walt Siegl has played with his latest custom.

Built entirely from the ground up, this new WSM creation is extremely hard to pigeonhole—and that’s exactly how Walt intended it. “I wanted to build a machine that looks like it comes from the larger two-wheeled world, and not only the motorcycle world,” he says. “From track bicycles and mopeds, as well as performance motorcycles.” 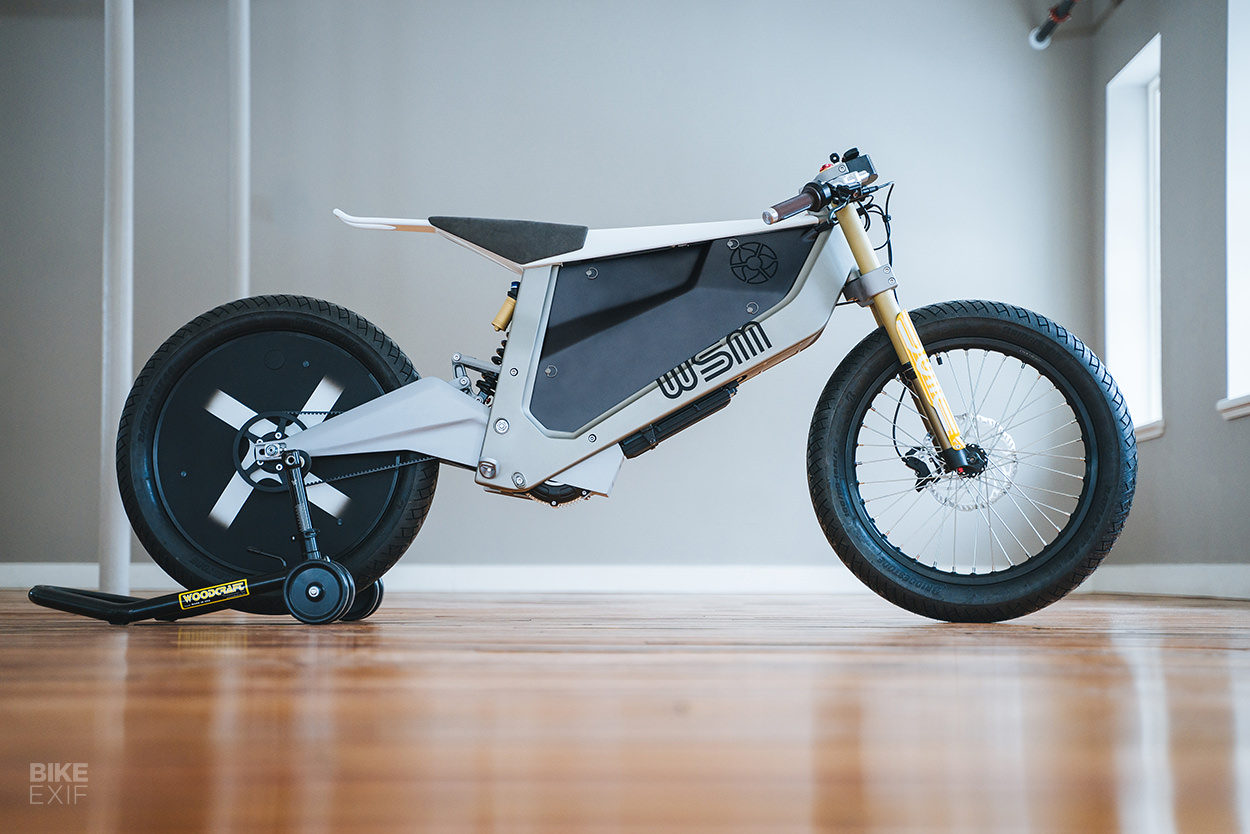 “Because my design platform is a combination of all these worlds, this bike could easily be the platform for a pedal-assist bike, a moped, or for an electric performance bike. Electric bike technology lends itself to this versatility.”

“I wanted a crisp and clean design, and the appearance of a concept bike, while still showing my handiwork and the love that went into building it.” 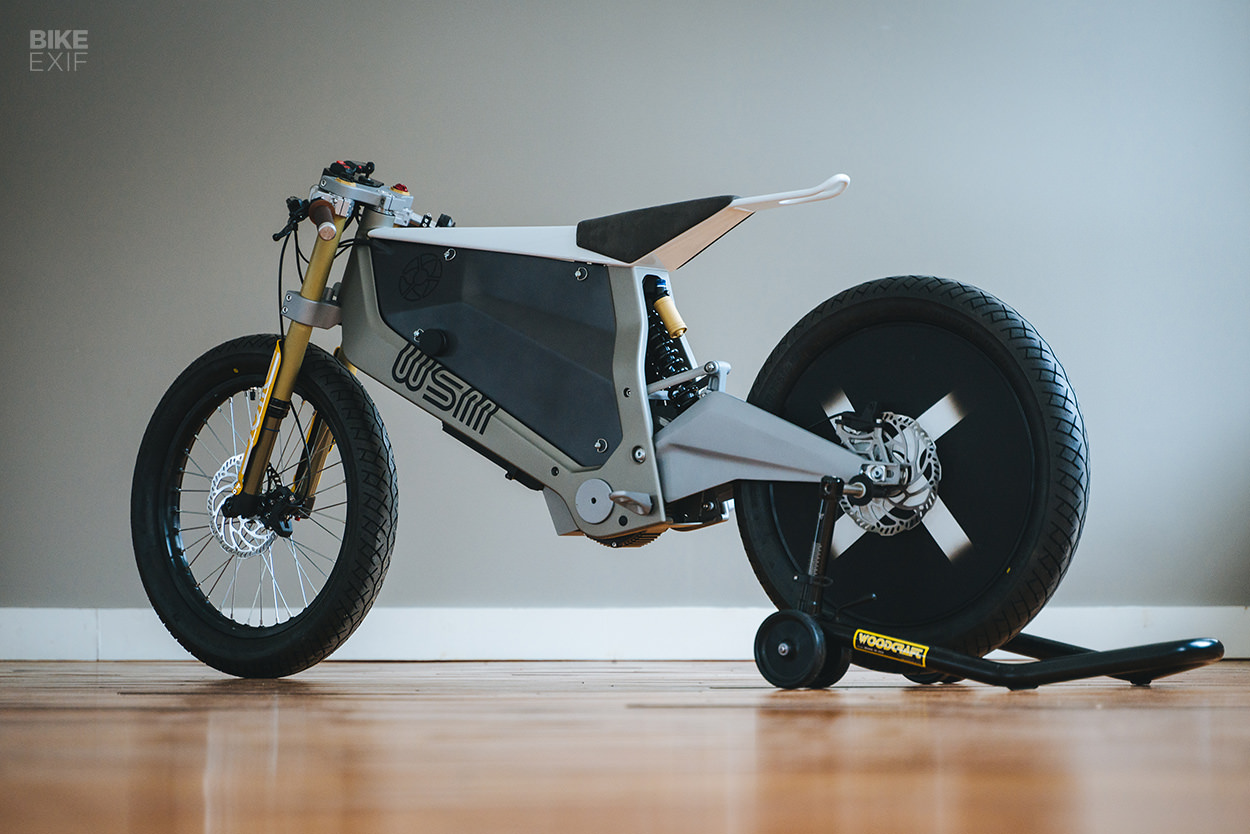 This isn’t the first time Walt’s worked with an electric powertrain—his Alta-powered PACT is one of the most alluring battery-powered two-wheelers we’ve seen. But that was very much a ‘motorcycle,’ and Walt wanted to do something unexpected this time. Creativity was paramount, because the project was commissioned by the Haas Moto Museum in Dallas, Texas.

“When we discussed the project,” says Walt, “Bobby Haas, the museum founder, and director Stacey Mayfield were in full support of my keen interest in building another electric motorcycle. Bobby is a great patron of custom bike builders (he has three of mine), and also continues to acquire every motorcycle that is truly relevant in the history of two-wheeled transportation. The museum is a must-visit.” 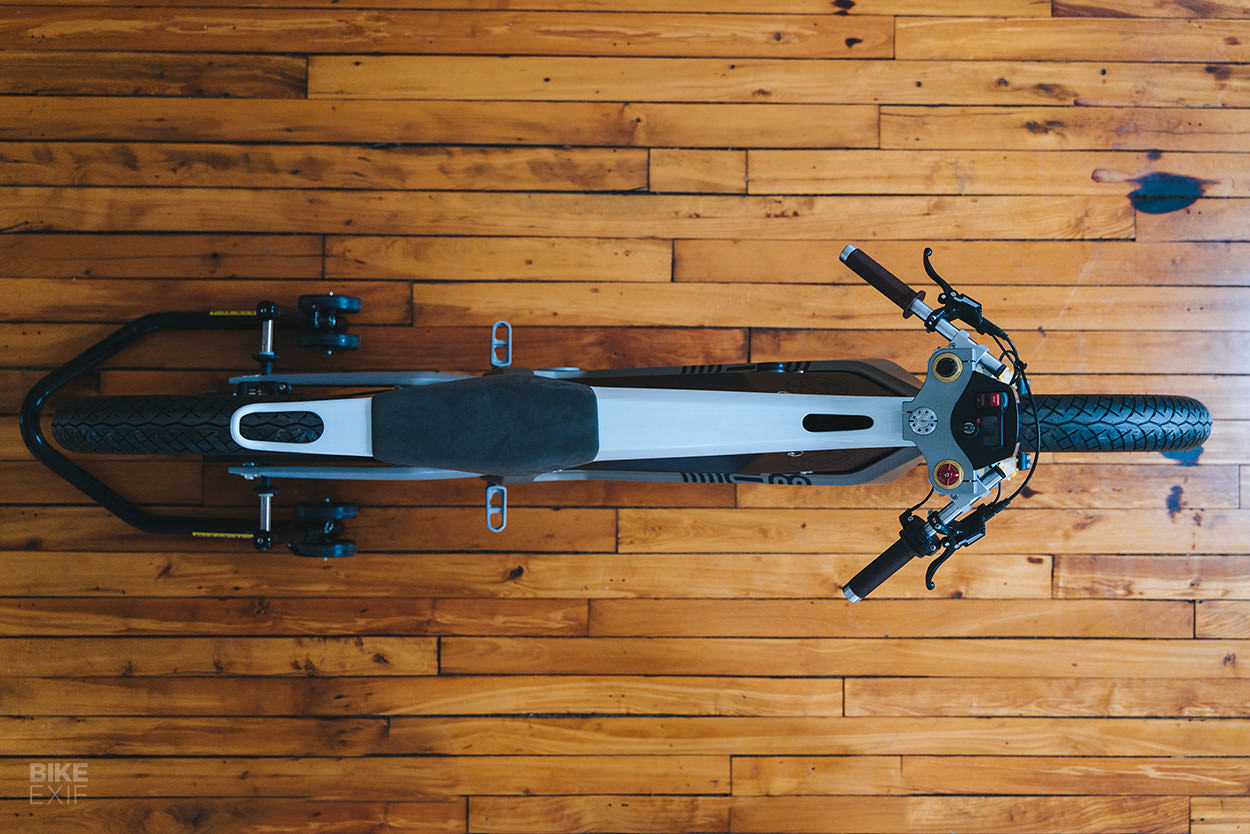 Walt wanted to build the lightest and strongest chassis possible, so he opted for a monocoque design with very little additional bodywork. The design was sketched out first, then a frame was built out of welding wire, and covered in paper to hone in on the final design.

Next up, Walt built a jig to fabricate the skeleton from thin-walled, small diameter chromoly tubing. Steel reinforcements were welded into the steering neck and rear suspension pivot points, and aluminum inserts added as mounting points. Then the whole thing was wrapped in carbon fiber, and finished with resin. 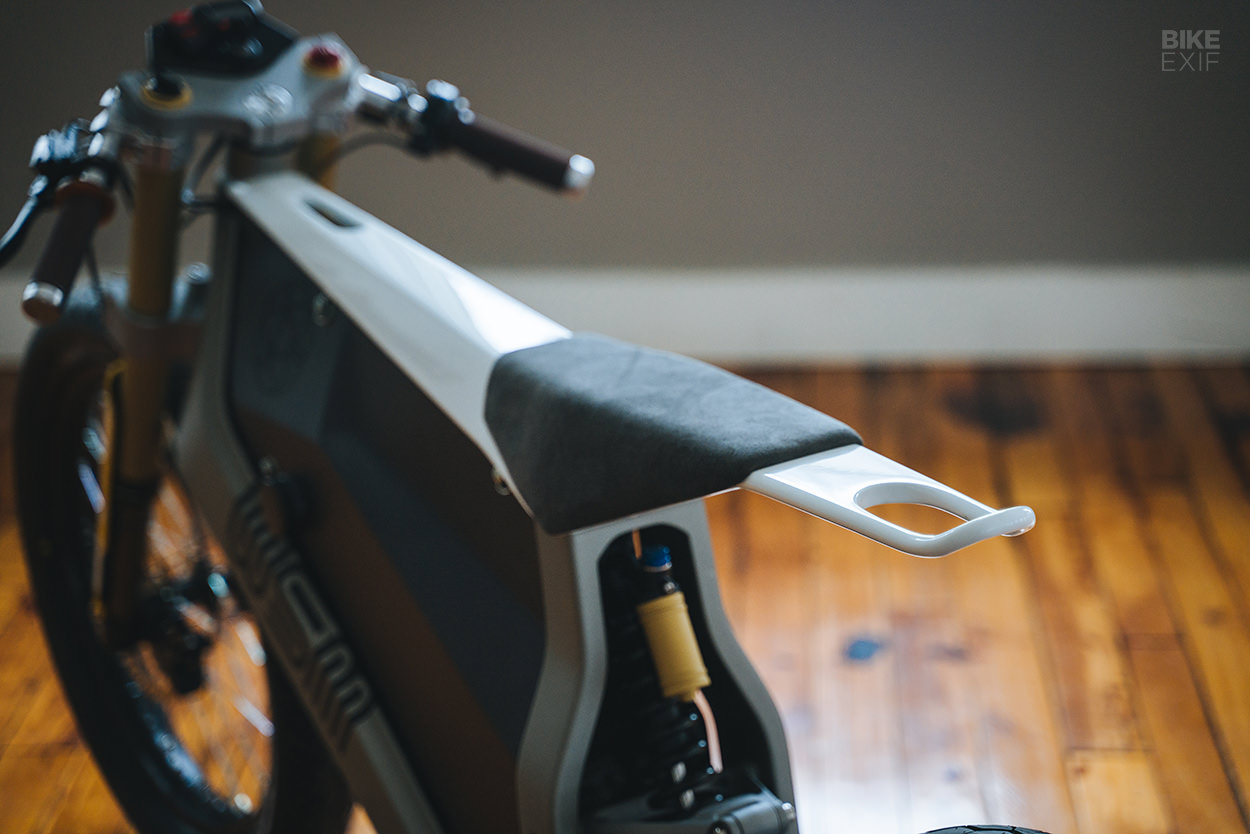 Up top is an Alcantara seat, built on a thin sheet of polyurethane on a carbon fiber seat pan. Just behind it is a mini tail ‘loop’ that was originally intended as a handle to move the bike around, but ended up being a design feature. The concept’s echoed further forward, where a cutout in the chassis provides access to the battery’s digital capacity display.

The only other ‘bodywork’ is a pair of battery covers, welded up from thin aluminum forms, and mounted with quarter-turn fasteners. 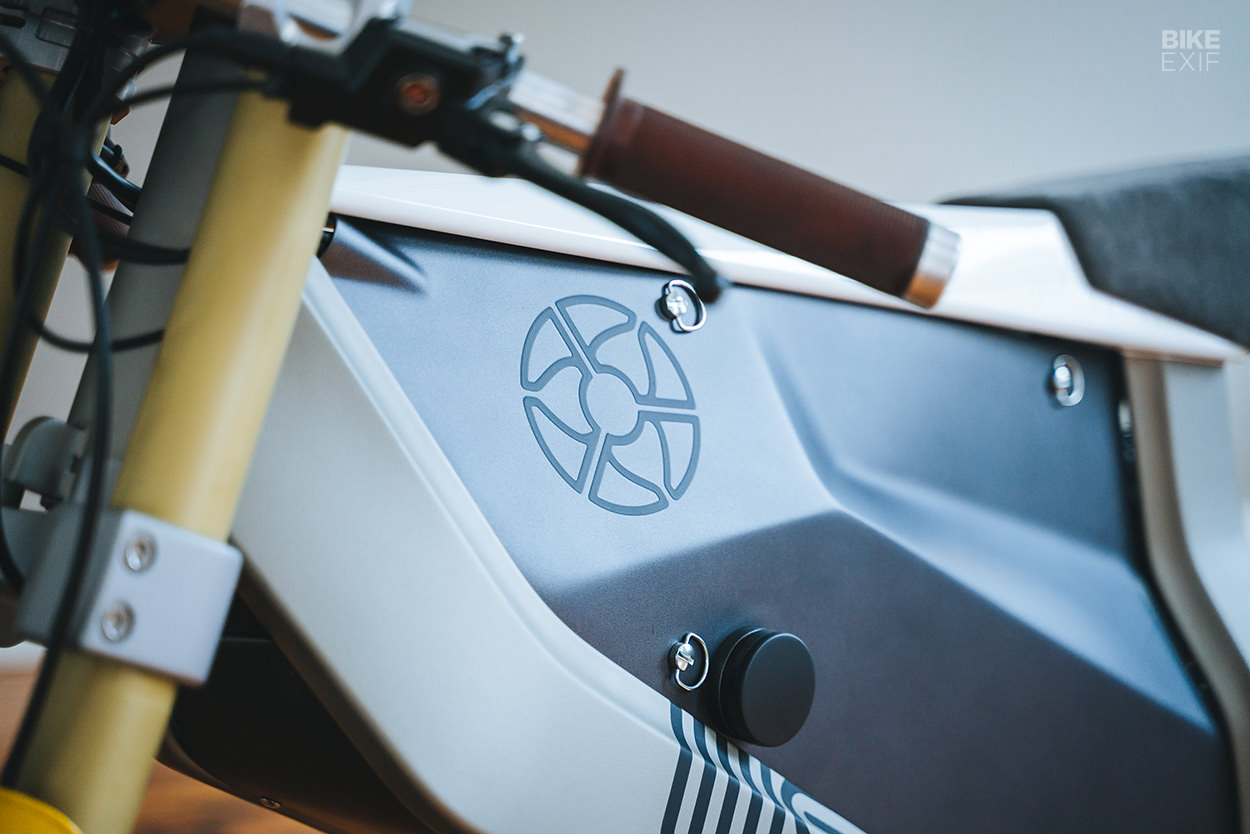 “The bike’s gestalt is defined by the lack of bodywork,” says Walt, “which was important to me. It was a win-win, because there was no bodywork needed to define its shape, and it saved weight. When I weighed the bike before paint, it was just 100 pounds [45 kg].”

At the core of WSM’s svelte speedster is a 3000W Sur-Ron motor, supplied by the e-bike company Luna Cycle. It’s hooked up to a 65 volt Panasonic battery pack, and controlled by a sine-wave controller that WSM programmed. The wiring harness is custom and uses Luna Cycle parts, and the gear reduction and final drive systems are belt-driven. 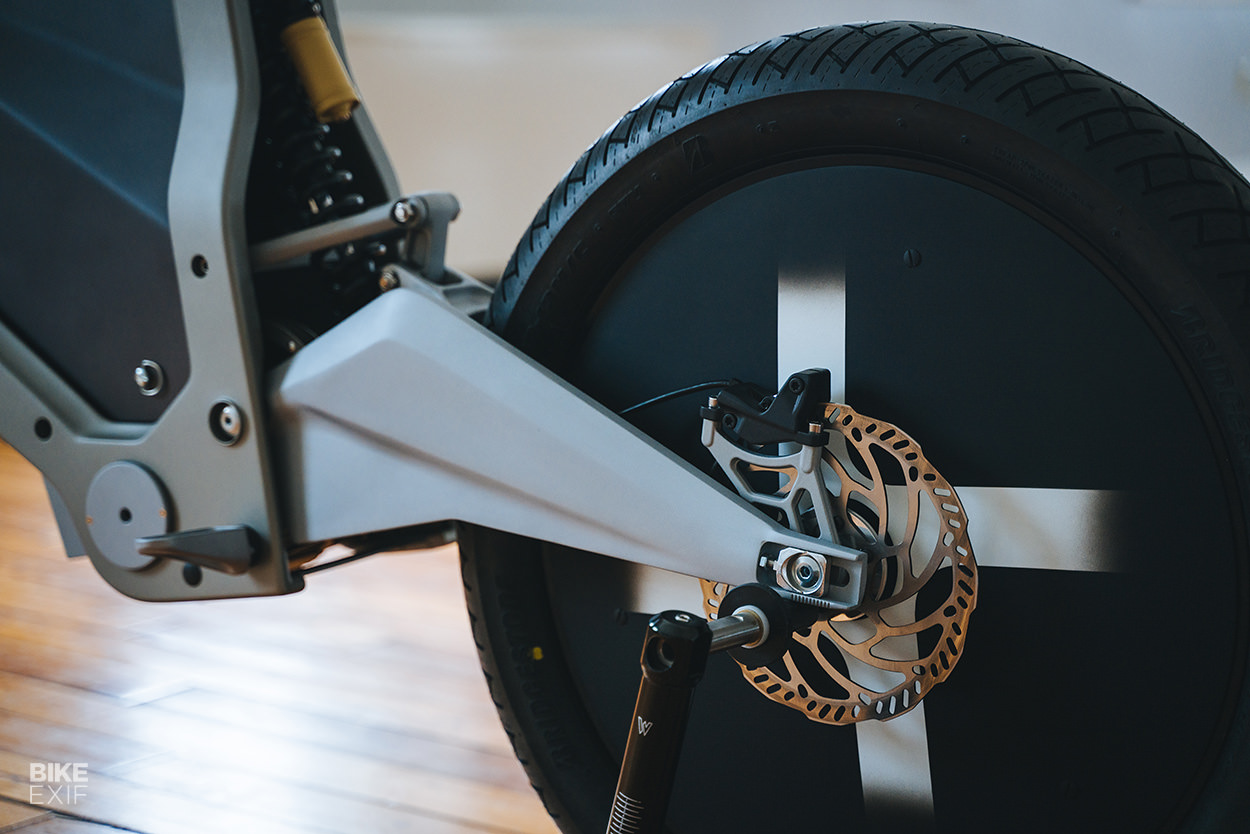 Up front is a set of shortened DNM forks with upgraded internals, held in place by WSM yokes. There’s a DNM rear shock, and the linkages, swingarm and disc brake set are all Sur-Ron parts. WSM boxed the swingarm in aluminum, and installed a pair of 19” Segway wheels with aluminum discs at the back.

Up in the cockpit you’ll find LSL clip-on clamps with custom bars and bar-ends, Sur-Ron controls and a Segway speedo. With no clutch or gear shifter, all that’s going on lower down is a neat set of foot pegs—and a small cover to protect the motor’s wiring. And that’s it; there’s very little else on this intriguing machine to distract the eye. 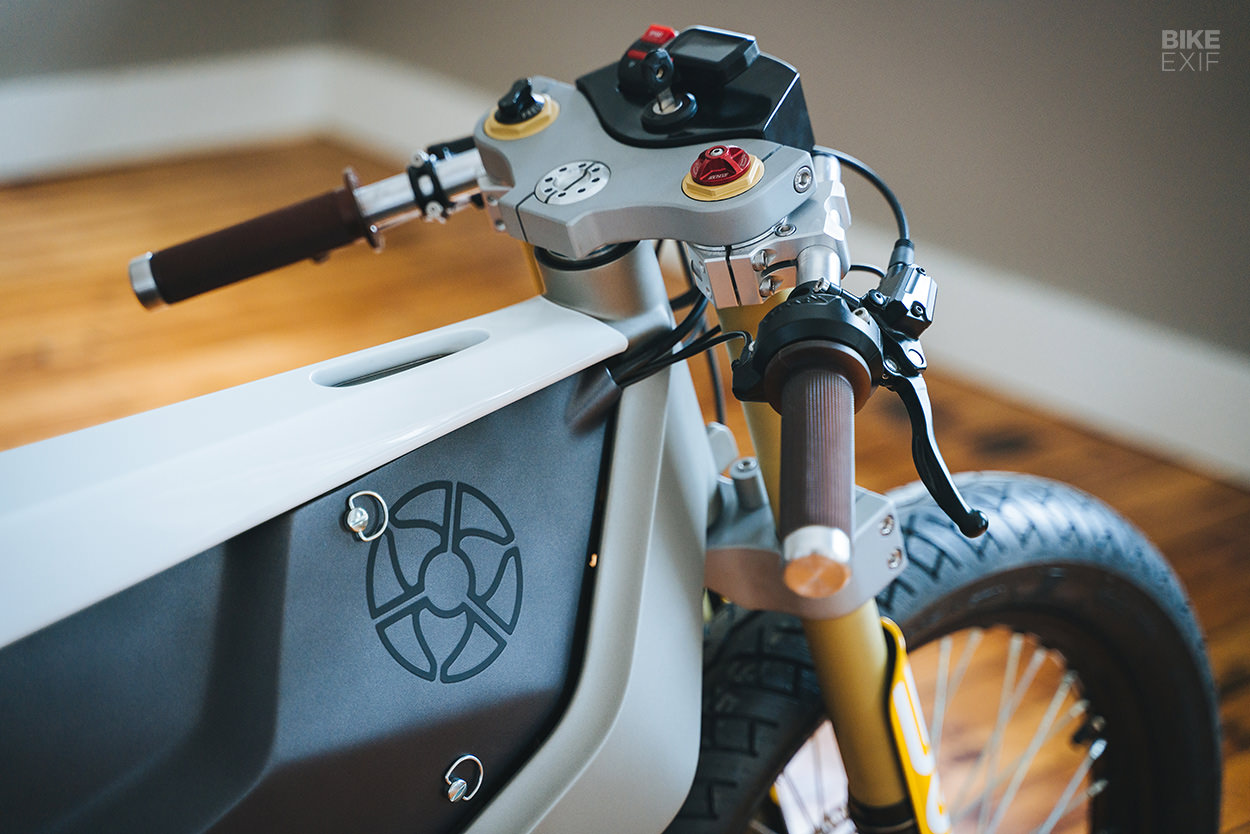 We asked Walt if he intends to build more of these. But he replied that since it’s for the museum’s custom bike section, it’ll remain a one-off—and more’s the pity.

At least he’s not throwing all of these ideas out the window… “My next e-bike project will have some elements of this bike for sure. The versatility of the platform is what I’m interested in.” 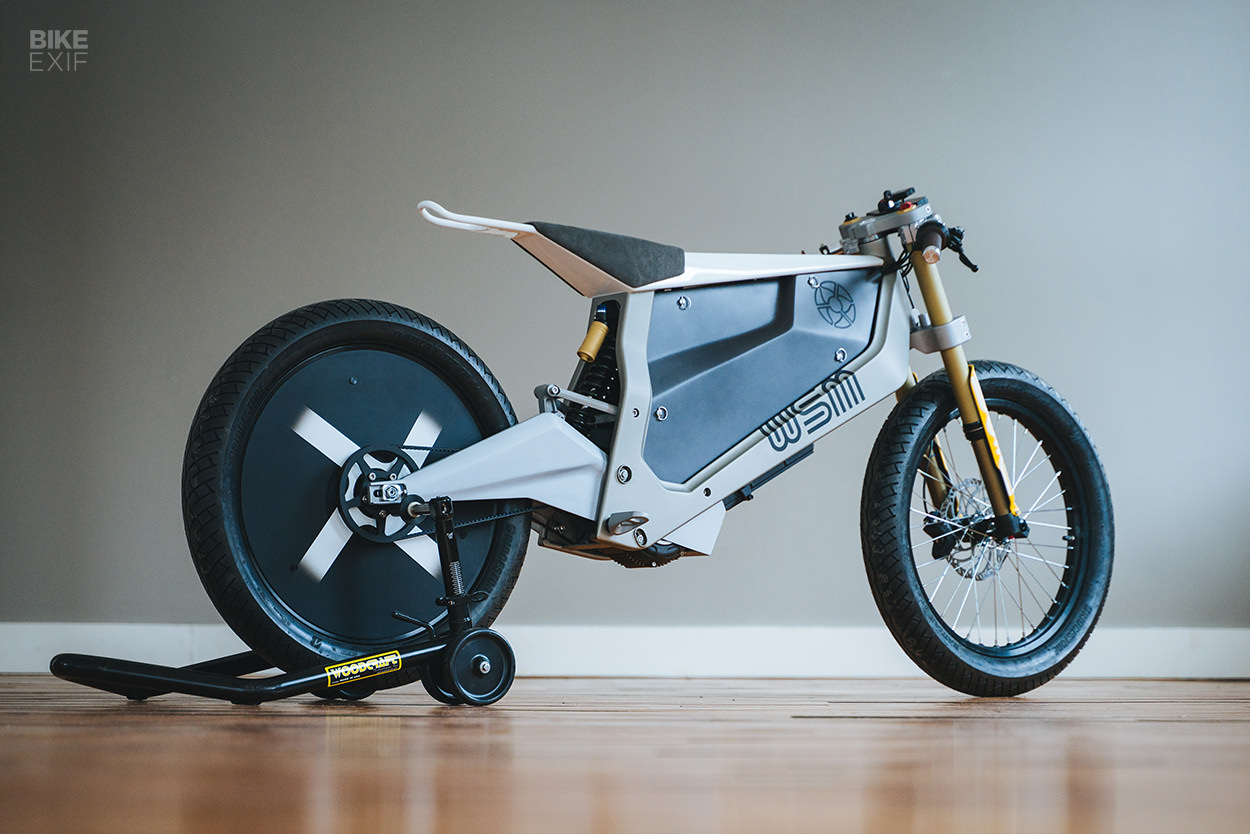