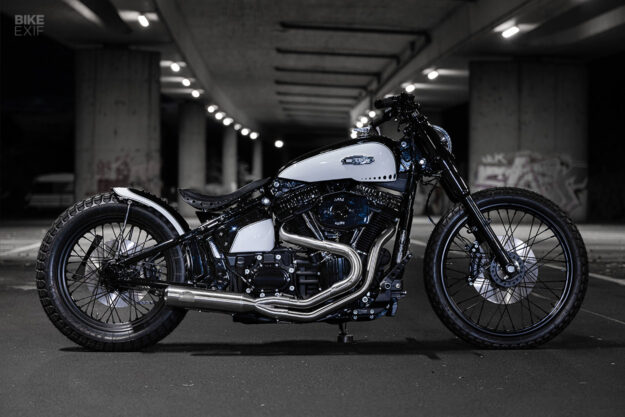 During his first decade of building custom bikes as One Way Machine, Julian von Oheimb worked exclusively on older Harley-Davidsons. Then, about a year ago, a customer asked him to apply his signature touch to a modern Milwaukee Eight-powered Softail. Julian obliged—and even though the platform demanded a fresh approach, he still knocked it out the park.

Julian’s clearly wrapped his head around modern machinery now, because his vintage-only rule has all but disappeared. He’s just built his third contemporary Harley custom, this time based on a zero mile 2021-model Harley-Davidson Softail Standard. 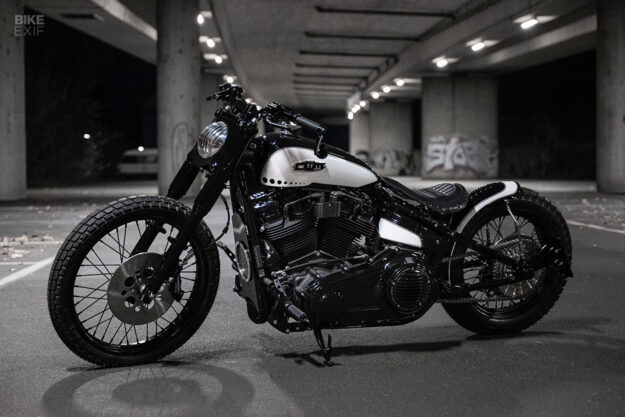 “With the modern technology and the power of the M8 engine, it’s not as easy as you would think to build an old school bike,” Julian tells us. But he’s unnecessarily modest. At a glance, this newer machine is almost indistinguishable from his typical retro builds.

The order came from a regular client, who wanted a fresh OWM creation to park next to the three he already owns. Other than specifying that the donor bike should be new, he had only a handful of requests. So Julian had free rein to flesh out the concept his way—which is just how he likes it. 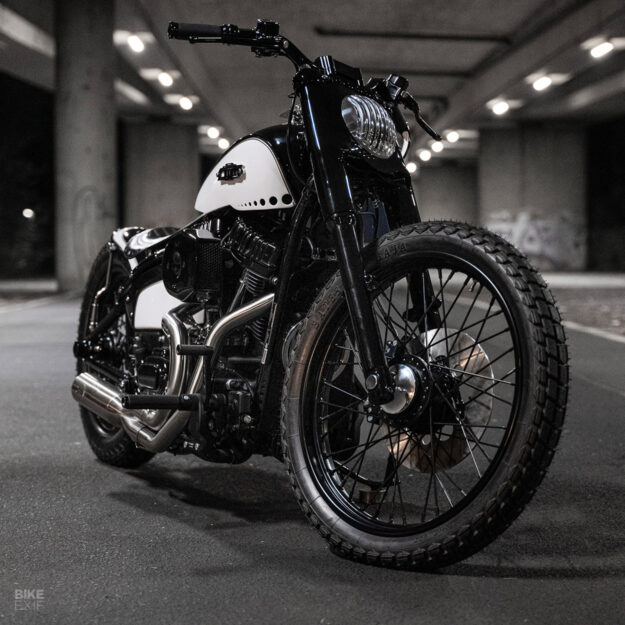 This Softail Standard is dripping with OWM’s hallmark style. But it’s not just evident in the obvious stuff—true to form, Julian’s made a ton of small changes that have a big impact.

It starts with the Harley’s flawless stance. Julian lowered the suspension at both ends, then wrapped the front fork uppers in hand-made steel sleeves to add some visual heft. TTS Motorcycle GmbH laced up a new set of spoked wheels, using 21F/18R rims from HD Wheels and wrapping them in Bates rubber. 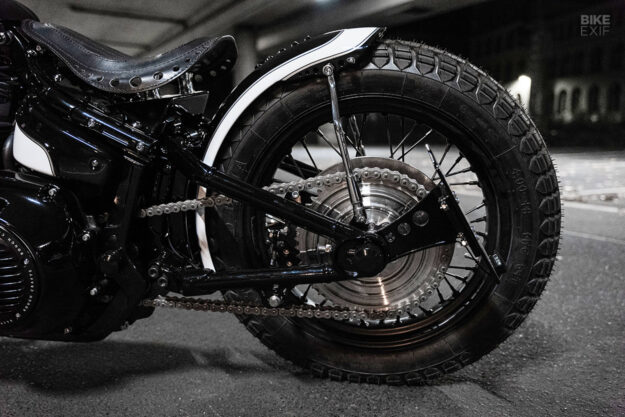 An inordinate amount of thought went into the rear brake setup. First, Julian converted the Harley from a belt to a chain drive, with a stainless steel rear sprocket that was machined to resemble a vintage drum brake hub. It’s kept secure by a special nut lock unit, from the German parts company In Max We Trust.

Next, he installed a OWM drive-side brake system, which had to be modified to fit the newer Softail Standard. It’s a low-key setup that tucks the brake disc in ‘behind’ the sprocket. The front uses a more traditional single-sided arrangement, and both ends are sporting Beringer calipers, with custom discs from Zodiac. 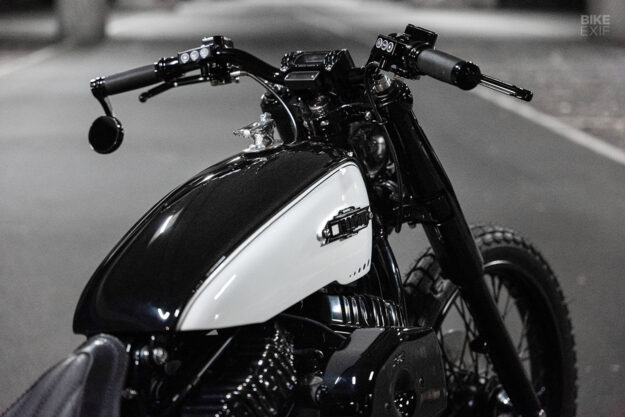 The Softail’s slender new fuel tank is another stand-out piece. Julian hammered it out of steel, masterfully blending flowing lines with a few well-placed angles. It’s adorned with a pair of OWM badges, and a gas cap built from an old car’s hood ornament.

The top curve of the tank flows gracefully into a custom leather solo seat. It uses a custom-made seat pan on a Thunderbike mounting kit, with upholstery by Spirit Leather. The stamped OWM logo adds another neat touch. 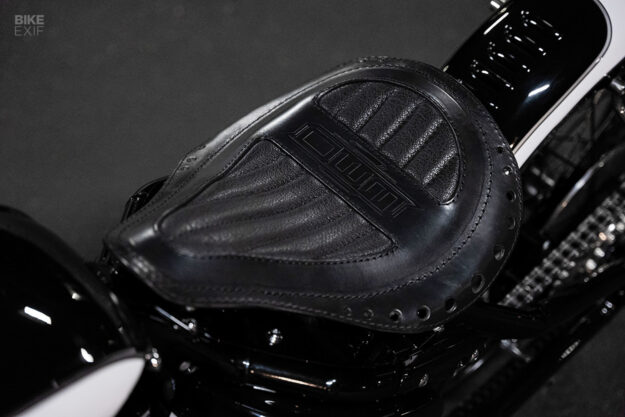 The rear fender started out as an off-the-shelf part, but it’s been heavily modified. It sits on a pair of custom-made stays, and is flanked by a pair of tiny Kellermann combo LEDs. An OWM license plate bracket sits lower down.

Julian also modified the OEM Harley side covers, but opted to leave a front fender off this build. (The original fender mounting points are still in play, just in case.) 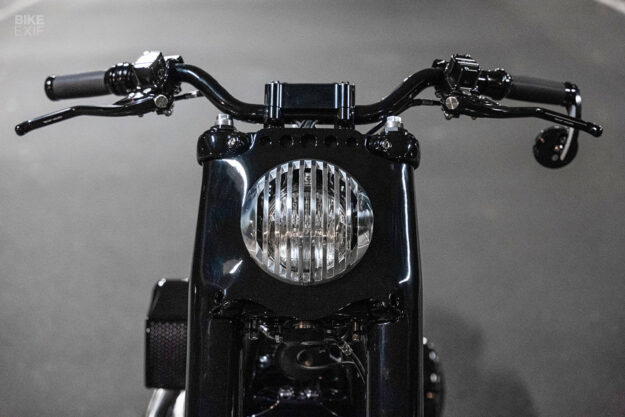 Up front is a CNC-machined headlight grill, with a set of OWM handlebars mounted behind it. The handlebar risers are from our good friend Winston Yeh at Rough Crafts in Taiwan, a regular OWM sponsor. They’ve been designed to incorporate the Softail Standard’s original digital speedo.

The “sinfully expensive” switches are from Rebuffini. Julian was happy to splash out on them though, because they’re currently the only units on the market that work out the box with Harley’s CAN bus system. Tiny Kellermann turn signals keep the front end street legal. 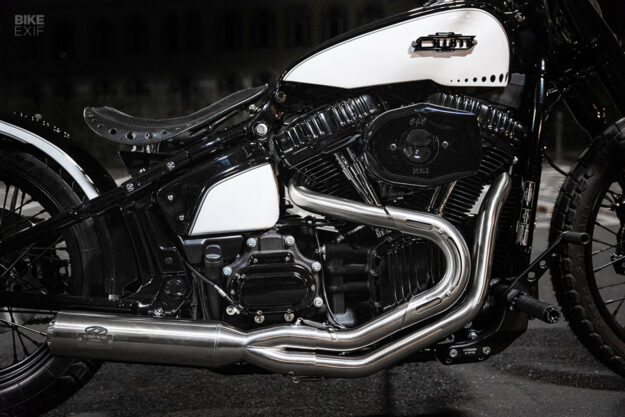 Other changes include a forward foot controls kit from Thunderbike, capped off with Rough Crafts pegs, and a hydraulic clutch from Rebuffini. Julian swapped the primary cover out for one from a Fat Bob, and added a Rough Crafts derby cover, cam cover and rocker boxes. The burly air intake is from S&S Cycle in the USA.

For the exhaust system, Julian took an off-the-shelf system from Vance & Hines, lopped off the muffler and welded on a Jekill & Hyde part instead. “A ‘legal’ exhaust was on the customer’s wish list this time,” he says. “But he still wanted a unique piece that not every other Harley rider rides around with, and I guess it worked out that way.” 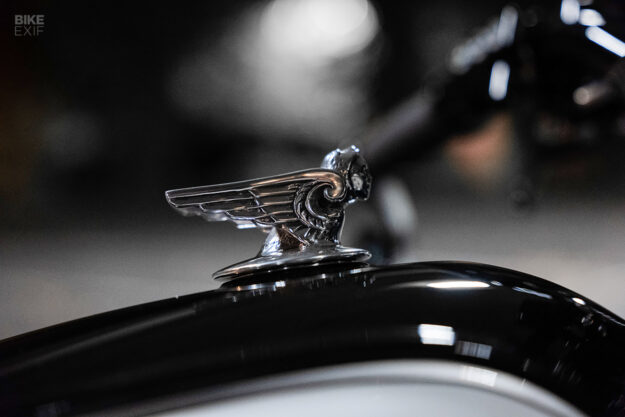 Like most OWM builds, this Softail’s color scheme is desaturated and menacing. BK-Lack GmbH laid down the base coat, while Chikos Pinstriping handled the details. Most of the hard parts are black, with Schwartz Optical Tuning polishing a select few metal bits to add a little contrast.

Julian’s customer is reportedly extremely happy with the results—and why wouldn’t he be? This slick cruiser has all the traits of a top-shelf OWM custom, with the benefit of modern power delivery and components. 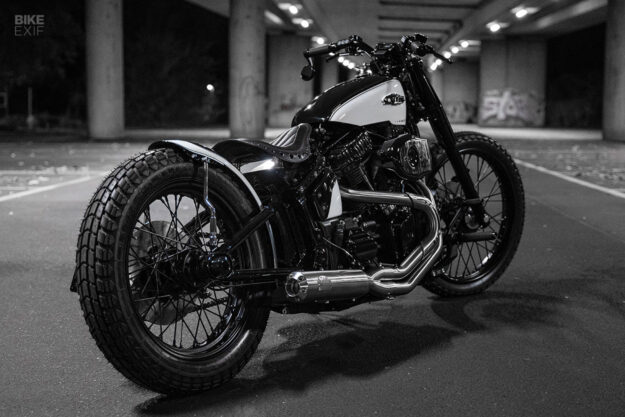 It’s also not the last modern Harley that Julian plans to build. He has six projects in the pipeline right now—a mix of old and new. Clearly the age of the motorcycle he’s working on is nothing but a number. 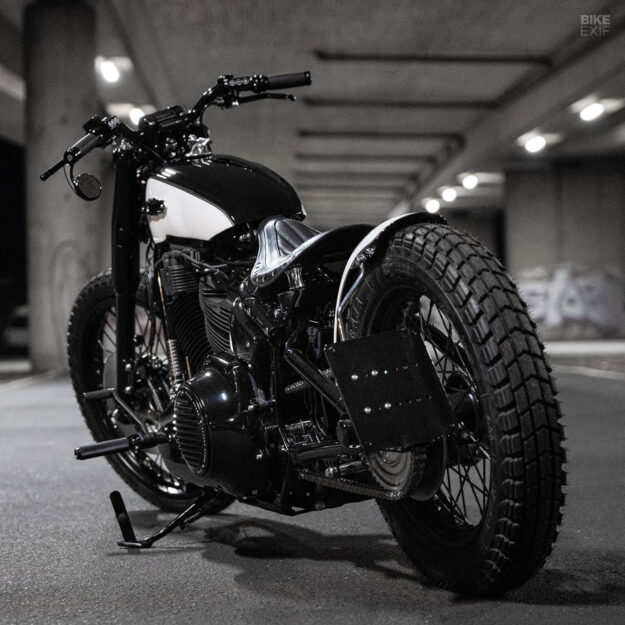