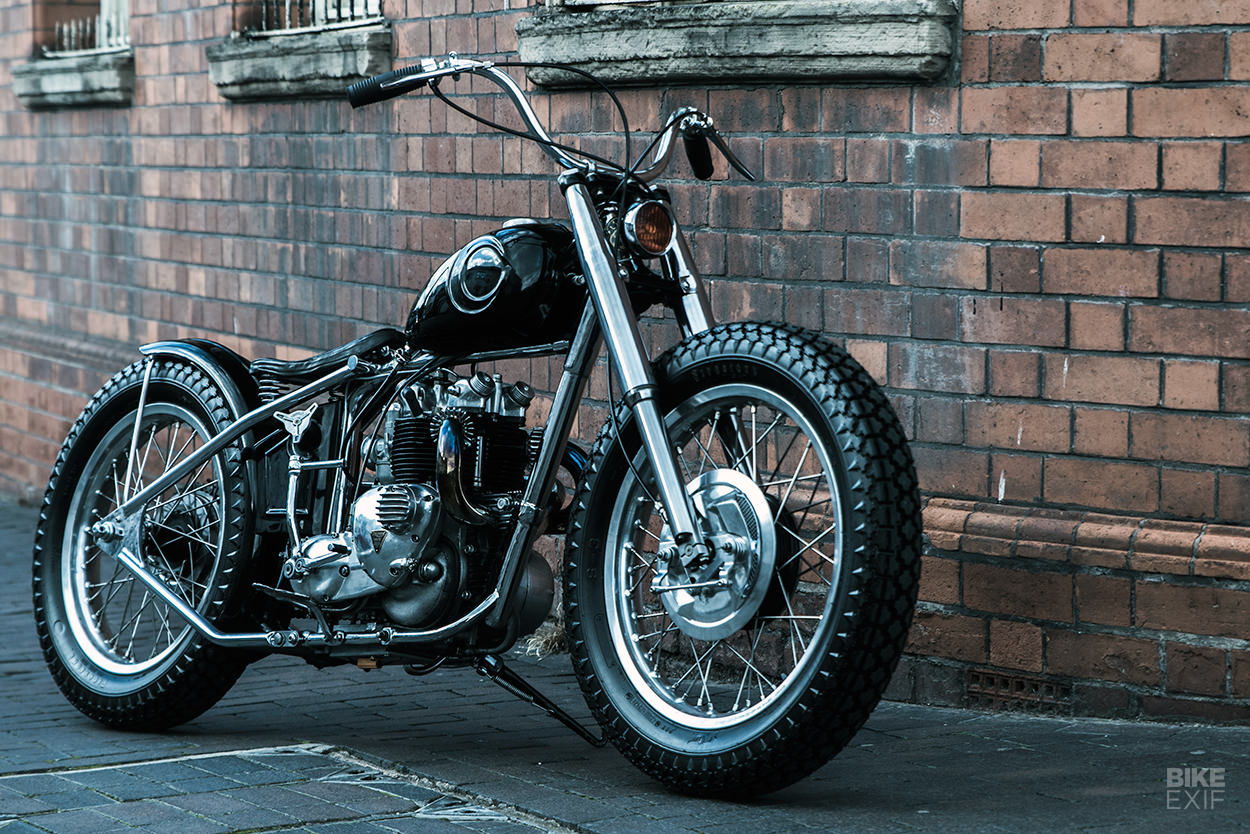 The unquantifiable, often disbelieved phenomenon of “love at first sight” is very real to me. There’s a moment when your eyes pass a signal to your brain to stop your legs, steady your head, and focus on whatever it is that just stirred your soul.

I fell in love with this ’68 Triumph Daytona called Luna the second I saw her, and used any excuse to walk past the bobber during the Bike Shed show in London. 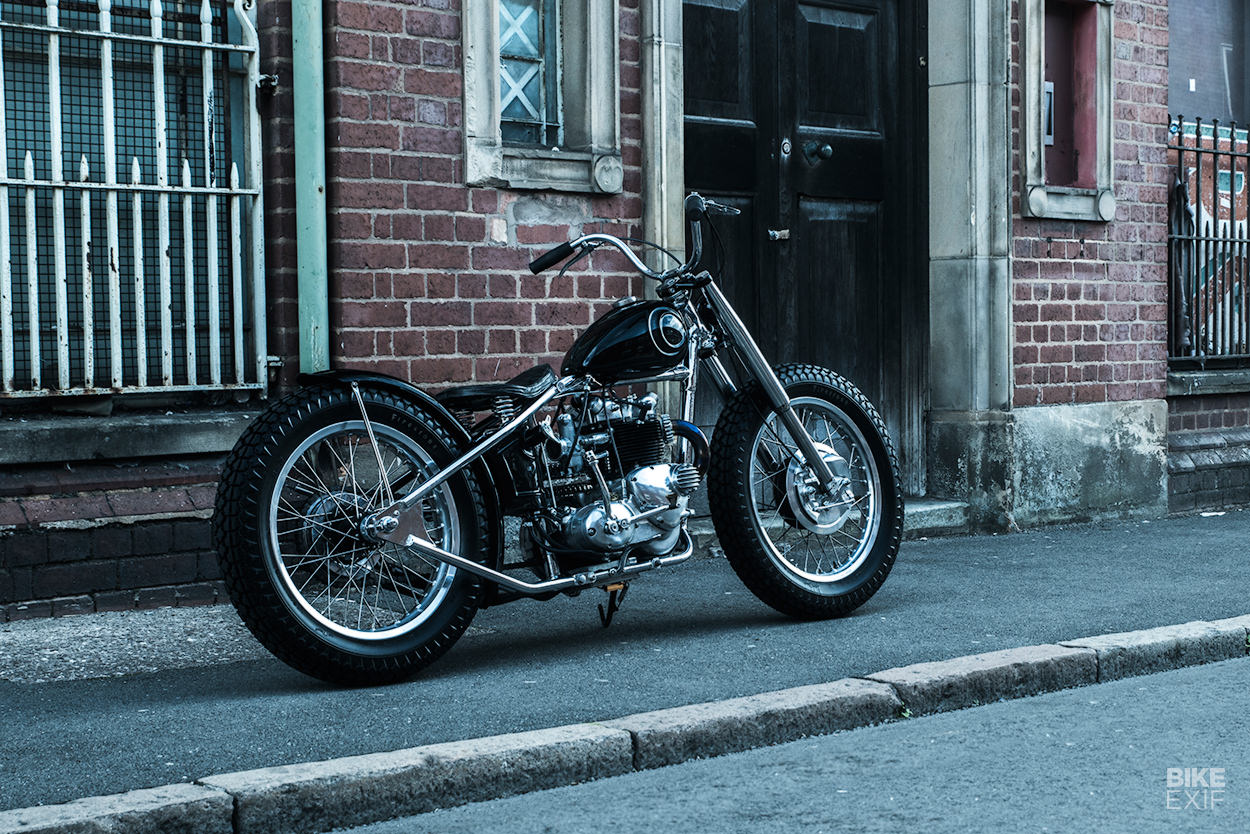 I’d slow down and let my mind wander, imagining where I’d ride Luna, given the chance. The bike is simple and honest, and more alluring because of it. The English builder Robbie Palmer drew inspiration for the project from the uncluttered, purposeful BMX bikes he’s been jumping and stunting since childhood.

At the start, Northampton-based Robbie knew Luna had to be a hardtail, had to have oversized tires, and had to be powered by a Triumph engine. He found a unit-construction Daytona 500 on eBay, languishing in a sorry state at a classic car restoration shop. 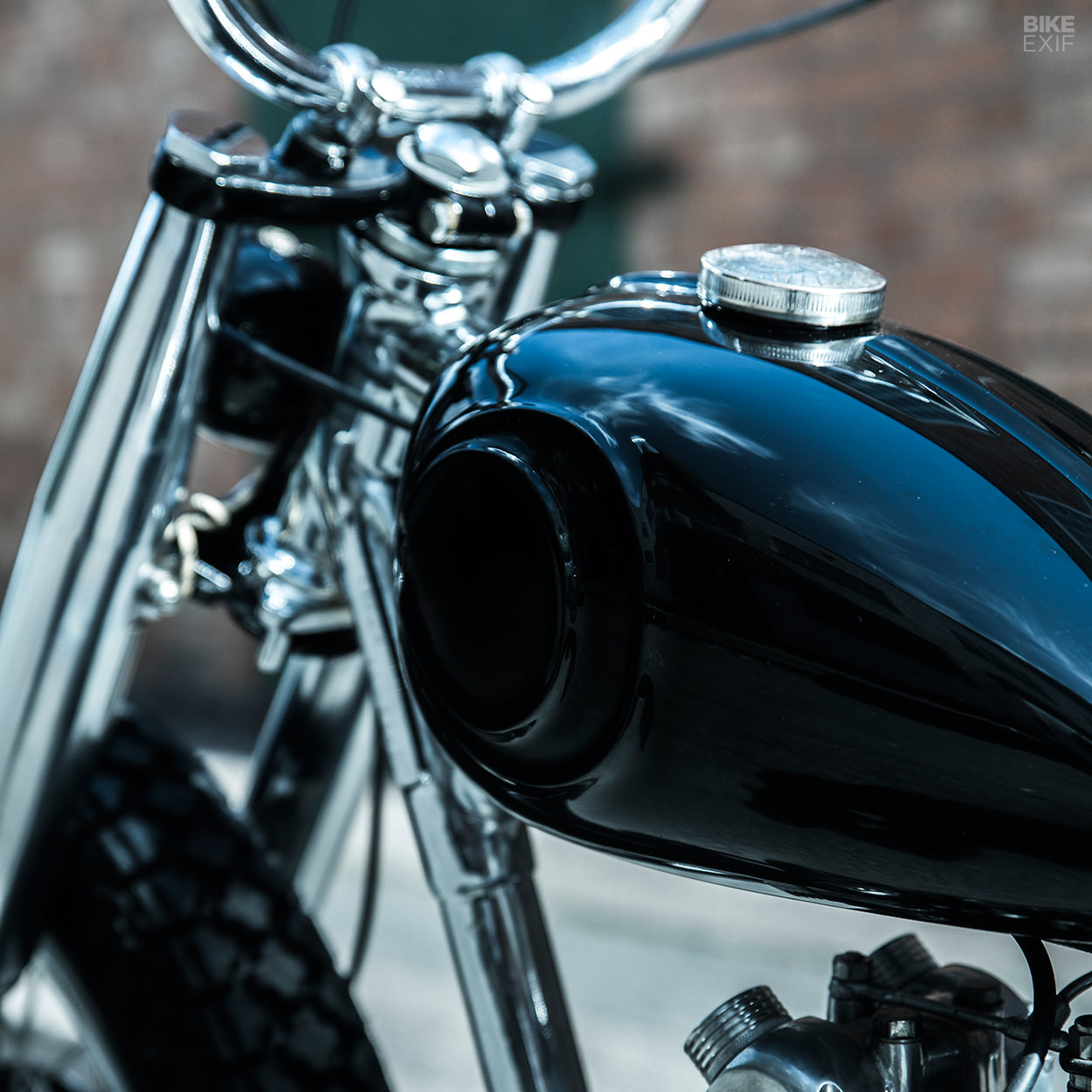 It would require a ground-up rebuild, but first Robbie had to construct a shed in his garden to house the project, close enough to a wi-fi connection so he could watch YouTube how-to videos. Having only built one bike before—a Honda Rebel-based bobber—and possessing only the most basic of mechanical skills, he would very much be learning on the job.

“There were lots and lots of mistakes and remakes, but I really enjoyed the journey,” Robbie says. “I think the saying, ‘It’s about the quest, not the grail,’ really applies to custom motorcycle building. I had a few meltdowns when things went wrong for the billionth time, but if you can enjoy the process, then it’s possible to come back and get into it again.” 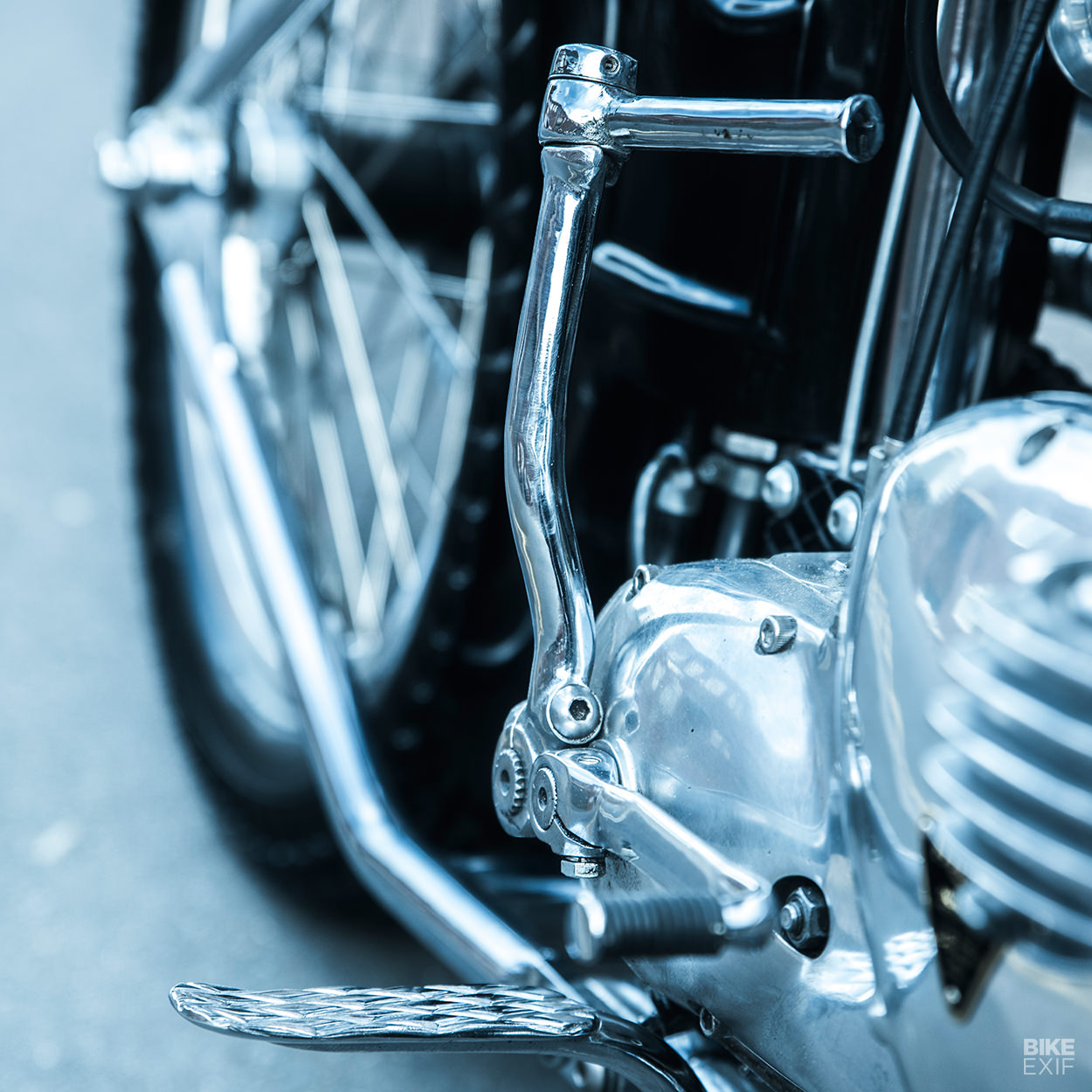 In the last two months of the build, Robbie’s wife forgot what he looked like, the glow from the garden shed a scant reminder that she was still married.

Robbie learned a lot throughout the build, teaching himself to weld, braze, and fabricate. 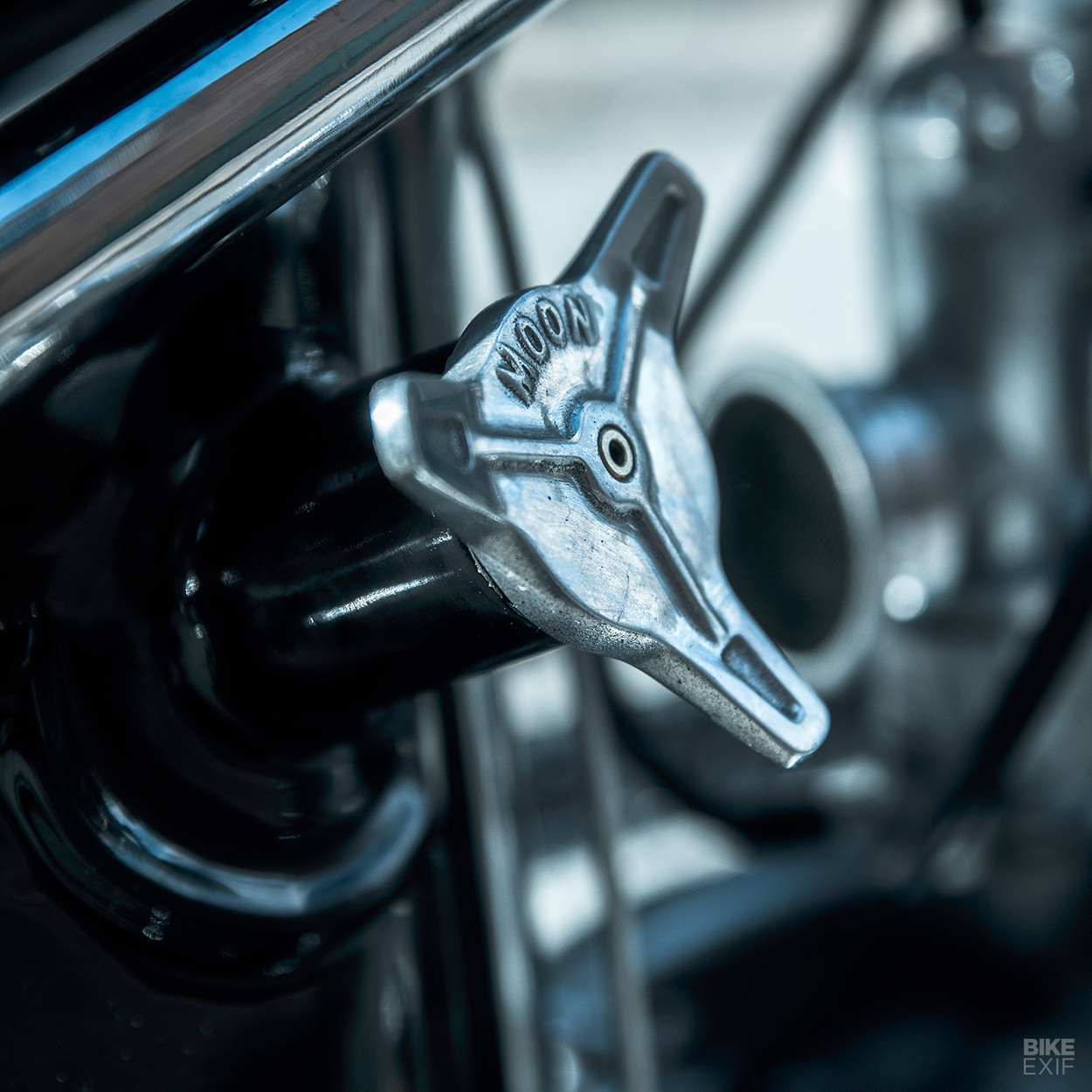 The brazed sheet steel oil tank, which started out as a cereal box template, proved most difficult; the feed and return lines are internally plumbed, and the shape fits snugly in the cramped space between the rear fender and downtube. “When I kicked the bike over for the first time and saw oil feeding and returning from the engine in the clear lines, I was so relieved,” he admits. 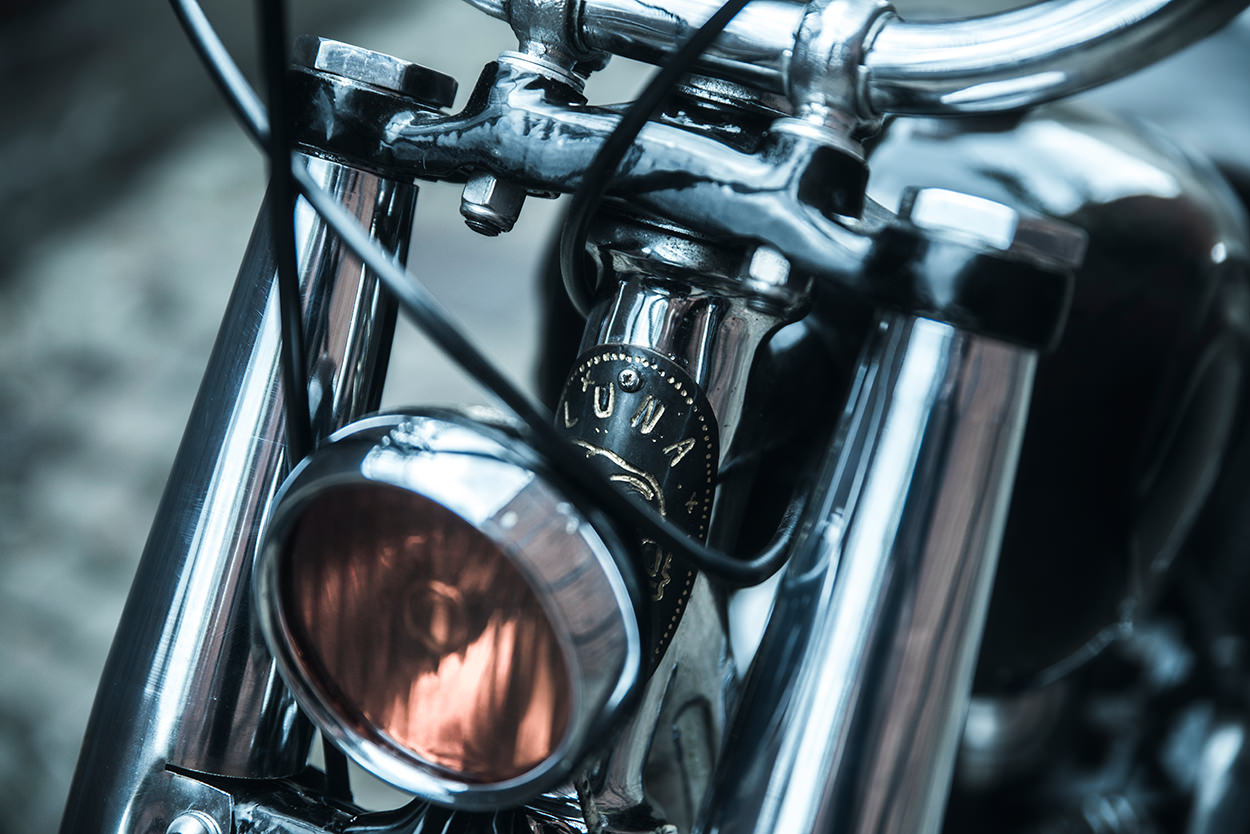 The bobber doesn’t have a battery, so wiring is minimal; what little there is feeds through the frame tubes. The ‘blood moon’ headlight is a 1950s bicycle lamp fitted with a modern LED bulb behind a brown glass reflector, finished with period-correct, fabric-covered wires.

The moon theme is echoed in the fuel tank moldings, and the luster on the frame is the result of many days of applying good old-fashioned elbow grease. “I polished it with an angle grinder, working from coarse sandpaper all the way down to the fine polishing mops prior to plating,” Robbie says. “I’m not usually a fan of shiny and polished and typically lean toward ratty, flat black, and raw steel builds, but I just started to polish a few parts and got a bit carried away.” 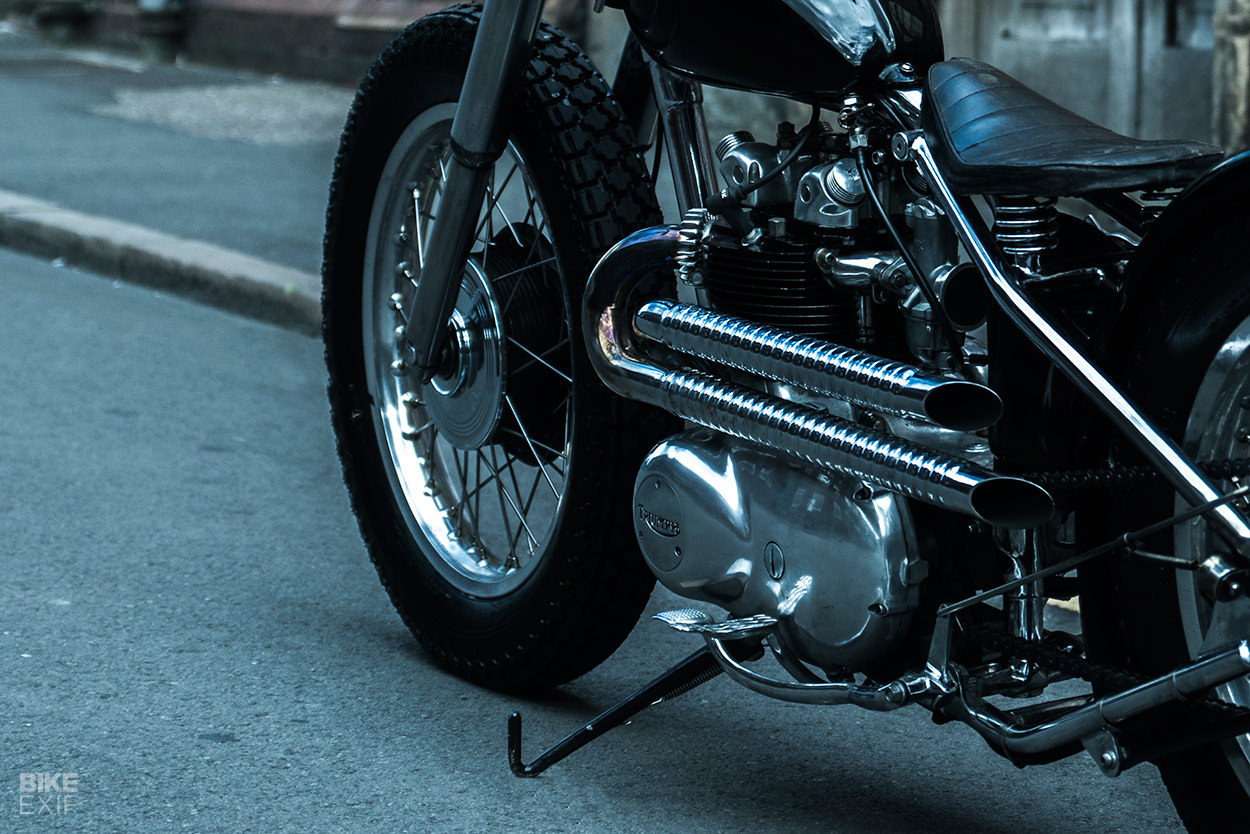 Before polishing the gearshift, brake pedal, and kick-start, Robbie heated the parts and bent them slightly inboard to maintain a svelte, narrow silhouette. Foot pegs are simple steel bar and plate, cross-hatched with an angle grinder. Rather than run a set of stubby, slash-cut exhausts, he grafted on sections of ripple pipe, adding even more character to the build.

It wasn’t just me who felt drawn to Luna. Over three days, scores of friends, builders, and industry bigwigs commented on Robbie’s pride and joy, because the bike just screams, “Come ride me.” Robbie has been doing just that, down the motorway, across the Midlands, and anywhere between. 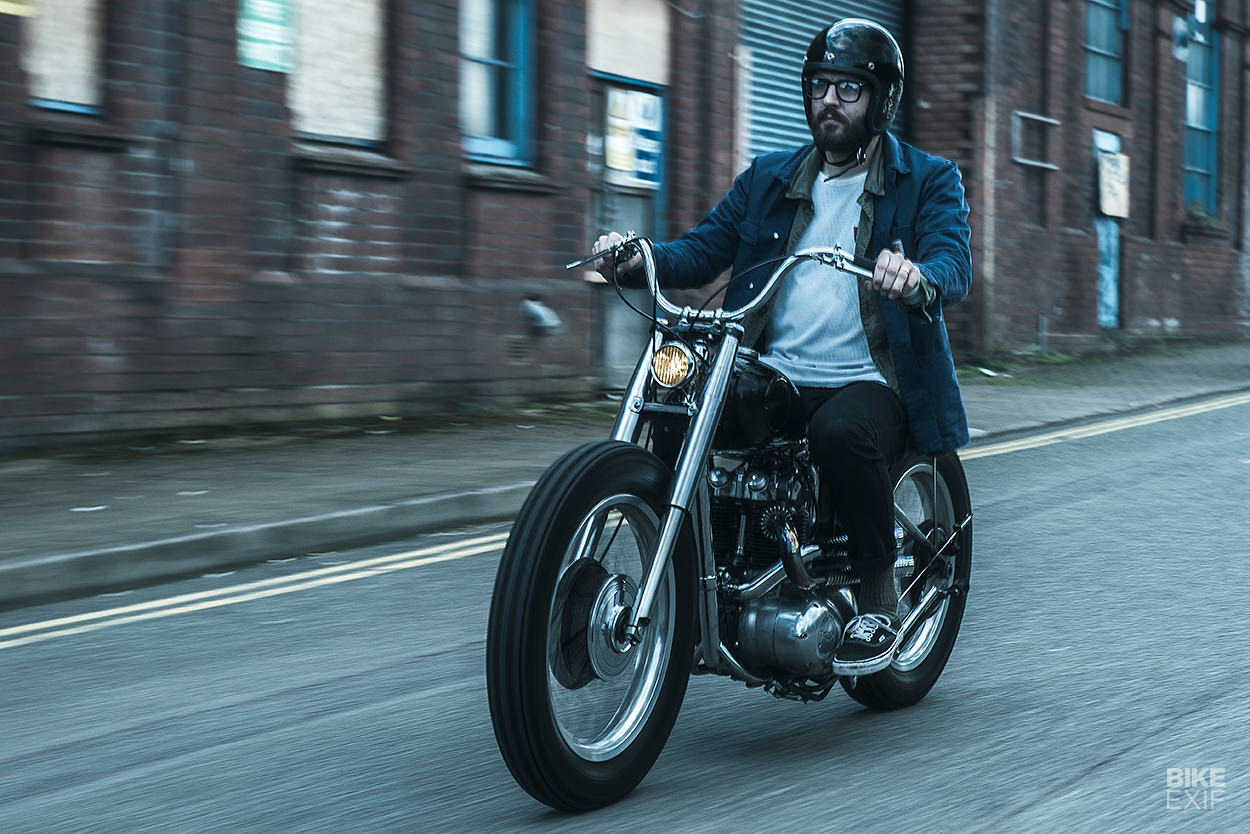 He loves Luna so much that he’s already started another project, a pre-unit Triumph. “The plan is to ride the crap out of Luna whilst I build the next Triumph. The pre-unit I’m building is very different . . . just because I want to try some new ideas. I’m looking at sand casting alloy parts and hoping to push a few new ideas with aluminum. I’m aiming to build three Triumphs, and I’d like them all to be different. It seems a shame to build a similar bike again.”

He needn’t worry. There will only ever be one Luna.