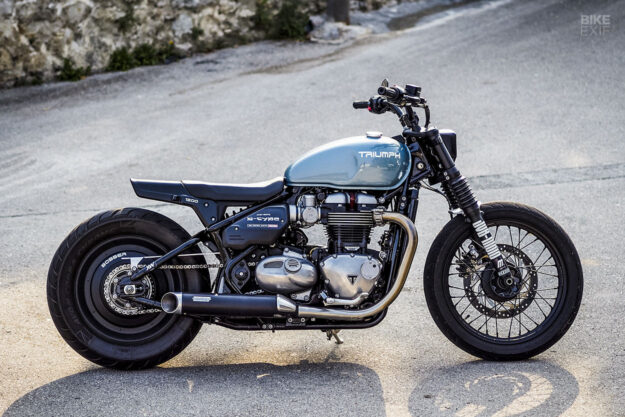 The Triumph Bobber is one of the most beautiful production bikes on the market right now. From its faux hardtail frame, to its solo seat and ribbed fenders, it’s an elegant motorcycle that oozes vintage appeal. But that’s not why Jens vom Brauck loves it.

“I like the Triumph Bobber for its minimalism rather than its retro elements,” says the man behind JVB-moto. “Few current day bikes are so modern and well engineered, yet so minimalist and clean. I wanted it for that, rather than the vintage details on it.” 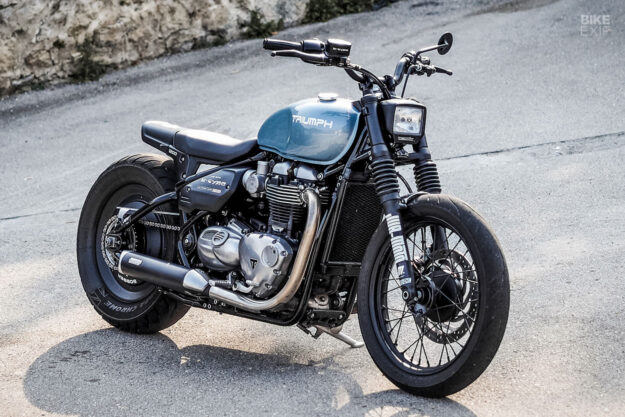 Thanks to Jens’ sharp eye and outstanding judgement, JVB-moto machines are recognizable by their clean styling. So rather than lean into the Bobber’s classic vibe, he set out to turn it into something more contemporary. After all, it is a modern bike, complete with a liquid cooled motor, ABS, traction control, and decent suspension and brakes.

“I tried to make it look less retro, more modern minimalist… even timeless” he explains. “Understated, but with a bit of a bad ass vibe.” 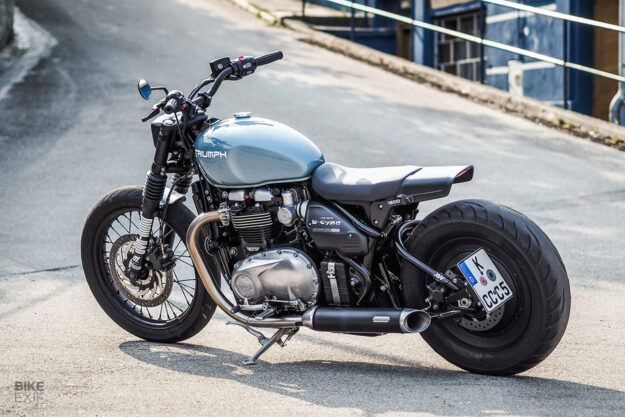 Starting with a 2017-model Bobber, Jens stripped off most of the OEM bodywork, keeping only its relatively compact fuel tank. Drawing inspiration from everything from choppers to 80s sportbikes, he designed new pieces that could bolt straight onto the Bobber, with a view to being able to replicate this style in the future.

The process took Jens months to complete. Each part was mocked up by hand with clay, aluminum, fiberglass and a filling compound. From that, molds were made so that the final parts could be manufactured using a high quality epoxy-based fiberglass. 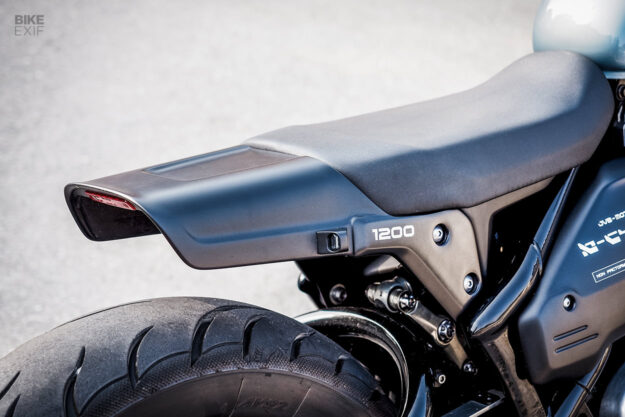 One major change is the Triumph’s rear end, where Jens traded the original bobbed seat for a sleeker, and more comfortable, tail unit. It sits on an integrated subframe that bolts directly to the OEM attachment points, with a slim LED taillight embedded under the back lip.

“It’s inspired by classic bobbers and choppers, but with a certain sporty feel about it,” Jens explains. “And of course I wanted it to look like a properly designed motorcycle, not a tinker job.” 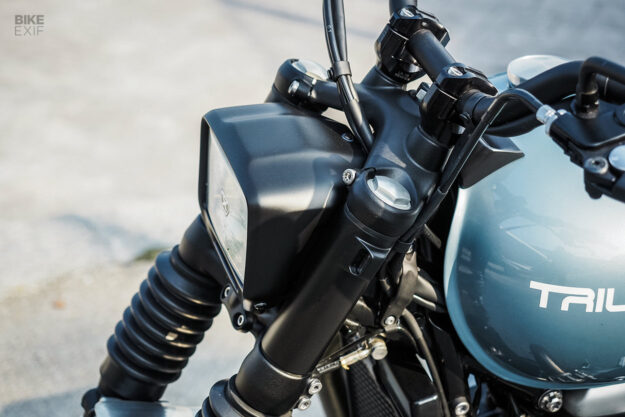 One of JVB-moto’s signature touches are the boxy headlight housings that Jens manages to adapt to almost any style of bike. Here, he’s taken the concept further by designing the Bobber’s new front nacelle around a rectangular headlight. And it works surprisingly well.

Rounding out the bodywork are a pair of side covers, that manage to complement both the Triumph’s frame and the modern look that Jens is aiming for. The front end is dressed with new fork gators, and a fork brace that carries a nominal front fender. Out back are carbon fiber wheel covers, an alloy chain guard and an adjustable license plate mount. 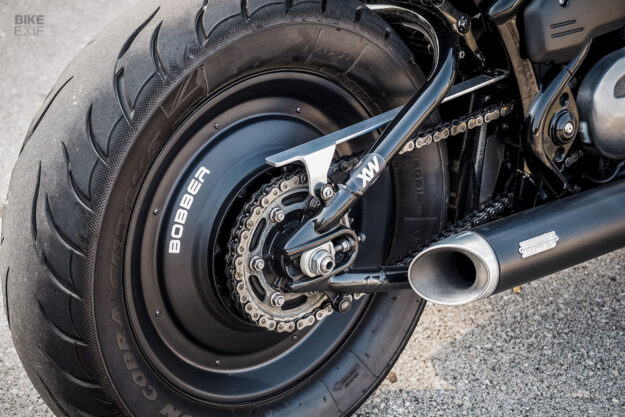 Jens has upgraded some of the Bobber’s running gear too. The front forks are running new Wilbers internals, with a Wilbers shock tucked in under the seat. The new exhaust mufflers are from Vance and Hines, but they’ve been modified.

Up top are a set of JVB-moto bars, held in place by LSL risers. A tiny Motogadget speedo sits in a neatly designed housing just in front of the tank, while a set of made-to-order LED turn signals from Motoism do duty at both ends. 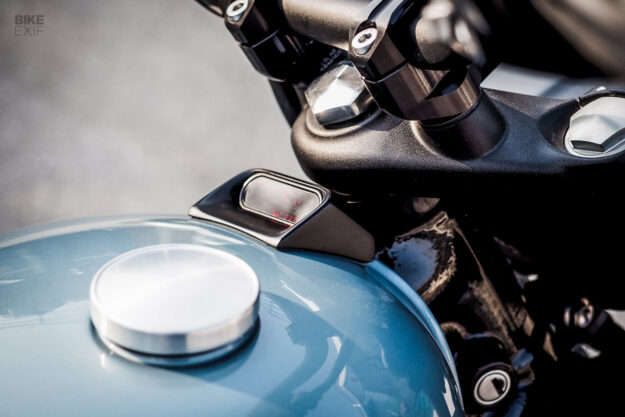 “With those retro-futuristic ‘typos,’ the bike has lost its vintage look and will no longer be mistaken for a motorcycle from the 50s,” quips Jens. “The color of the tank is vintage though. It’s a timeless British Leyland greyish-blue from the 60s.”

We certainly see the appeal—and we’re pleased to report that, like all JVB-moto builds, the Bobber was made to be ridden. Jens took it to the popular Wheels & Waves event, then tore through the Pyrenees on it. And it’s headed to the Glemseck 101 race festival next. 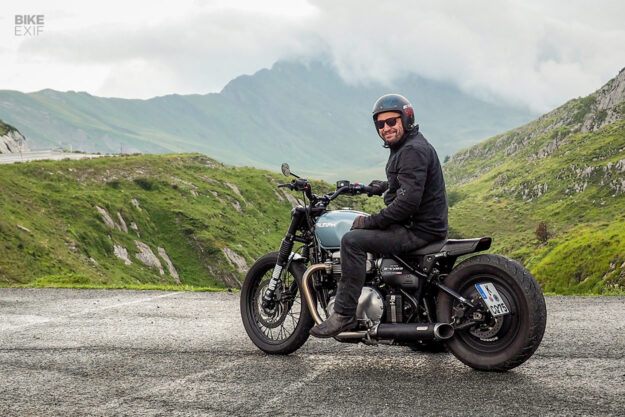 “It’s great fun,” he tells us, “and it’s quicker than you’d expect. With 225 kilos it is quite lightweight for a 1,200 cc cruiser. Plus a really great torquey engine, a decent chassis, a comfortable seat and modified suspension make for a beautiful riding experience.”

So what’s the next step? Jens has enjoyed a long and fruitful collaboration with the European parts manufacturer, Kedo. So naturally, he’s planning to put as many of the parts on this Bobber into production as he can. 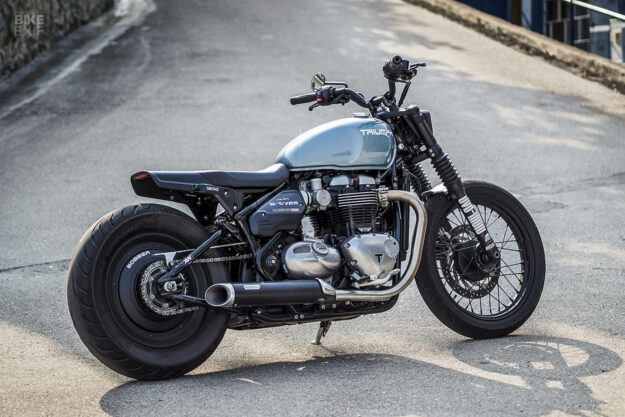 We’ll be keeping an eye on his progress—and on the local classifieds, in case any good second-hand Triumph Bobbers pop up. 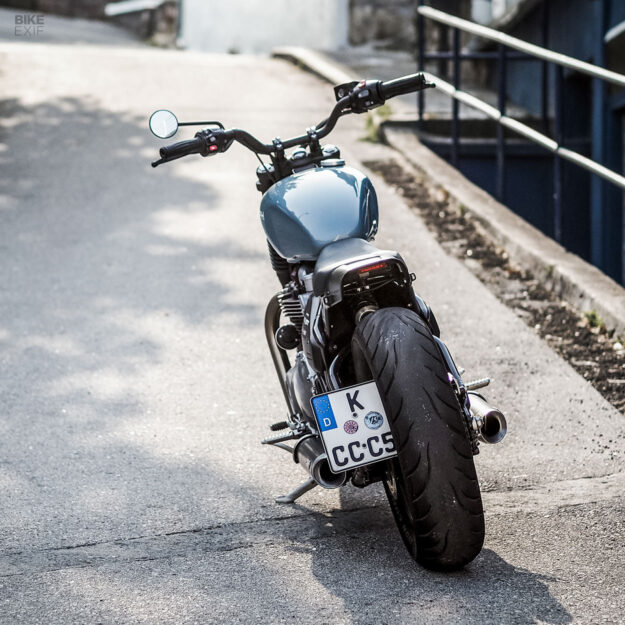