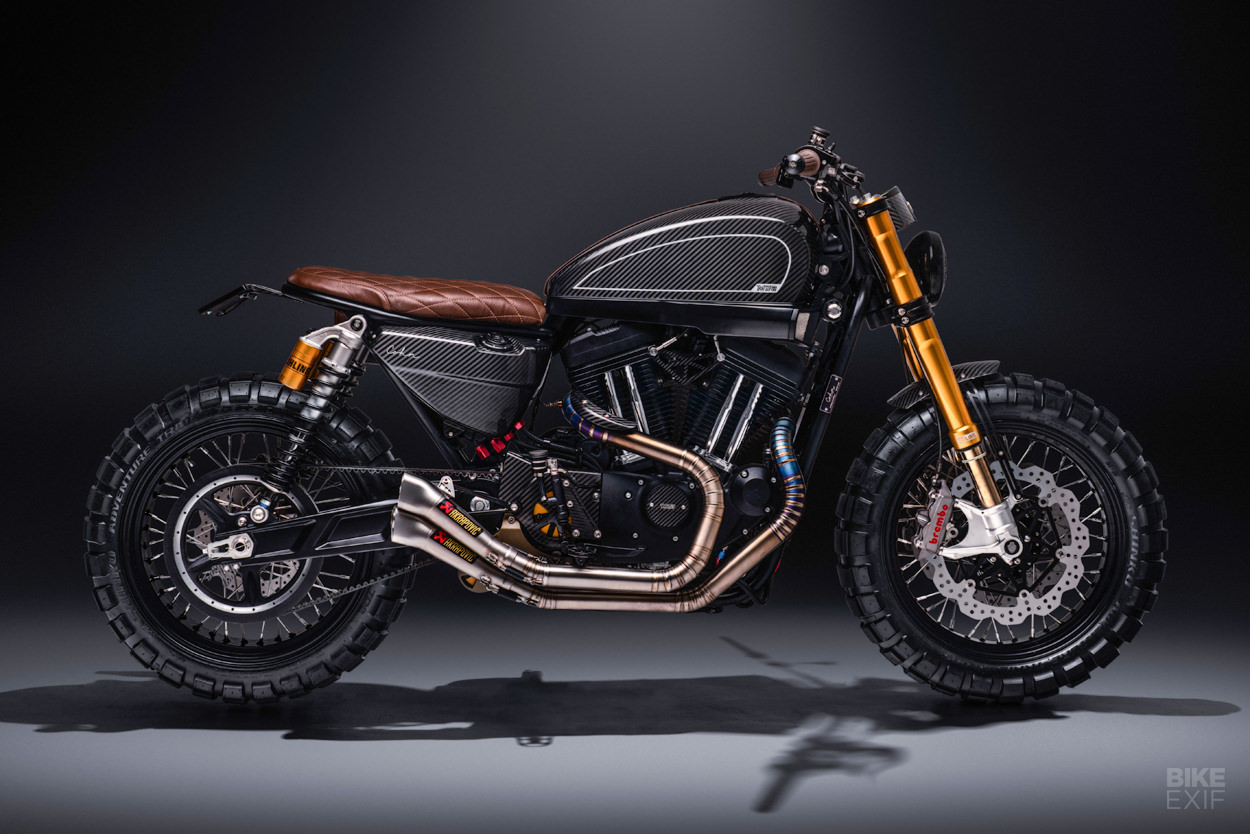 The market for modified Sportsters is crowded. Most builders of repute in the USA know their way around the venerable platform, and the array of aftermarket parts is dizzyingly large. It takes something very special to stand out—like this custom-framed, limited production special from Cohn Racers.

The man behind the Florida workshop is Chet Perez, who was born into a motorcycle-mad household over 4,000 miles away in Madrid, Spain. His destiny was predetermined from an early age: “At four, I was already riding a Yamaha PW50. And when I turned seven, I started racing Trials.” 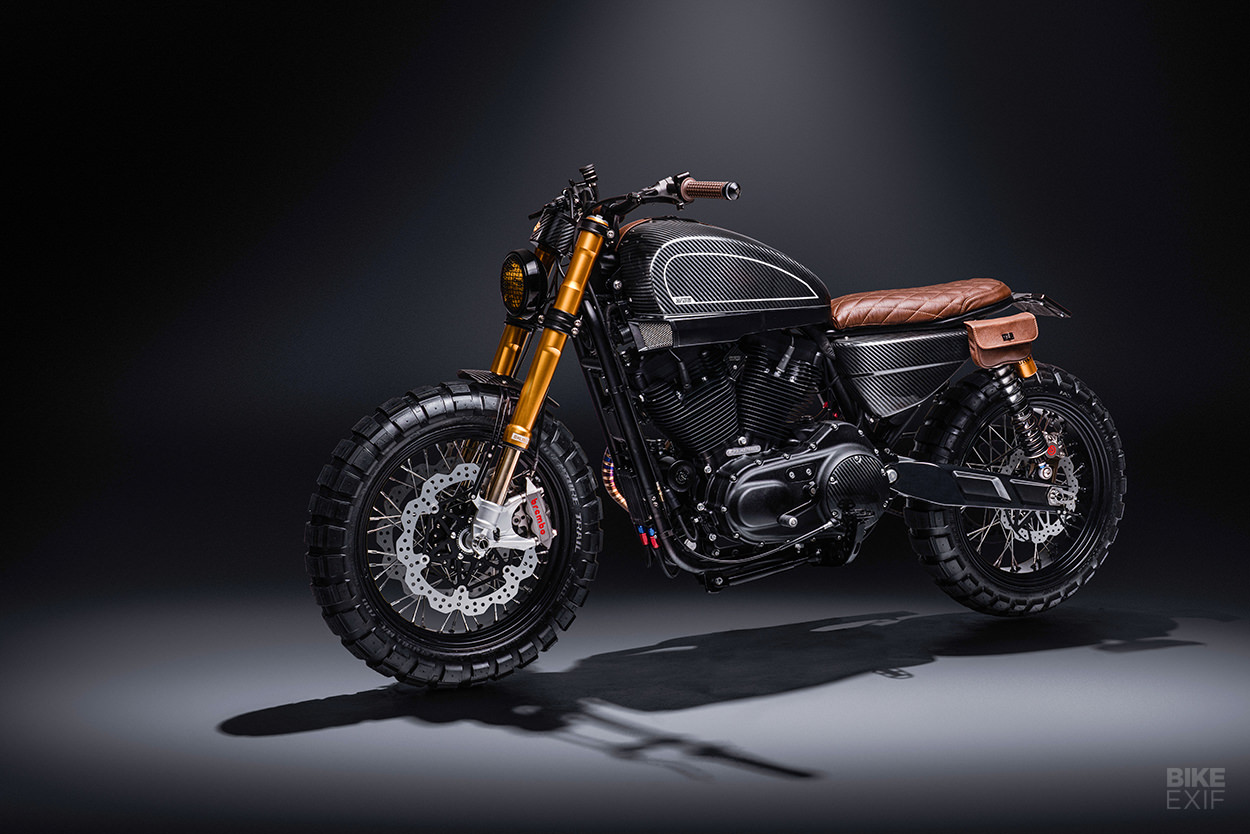 Chet always worked on his bikes, so he was gaining mechanical knowledge while most kids were watching Rugrats. Then he moved to the USA to study and spend a few years with Apple, until he realized the tech world was not for him. So he set up Cohn Racers in 2017.

It was a jump into the deep end. “You don’t know how hard it is to start a motorcycle shop until you actually do it. This is why I have so much respect for every other builder in the industry.” Fortunately a turning point arrived in 2019, when Chet revealed his Harley XR1200 Muscle R. 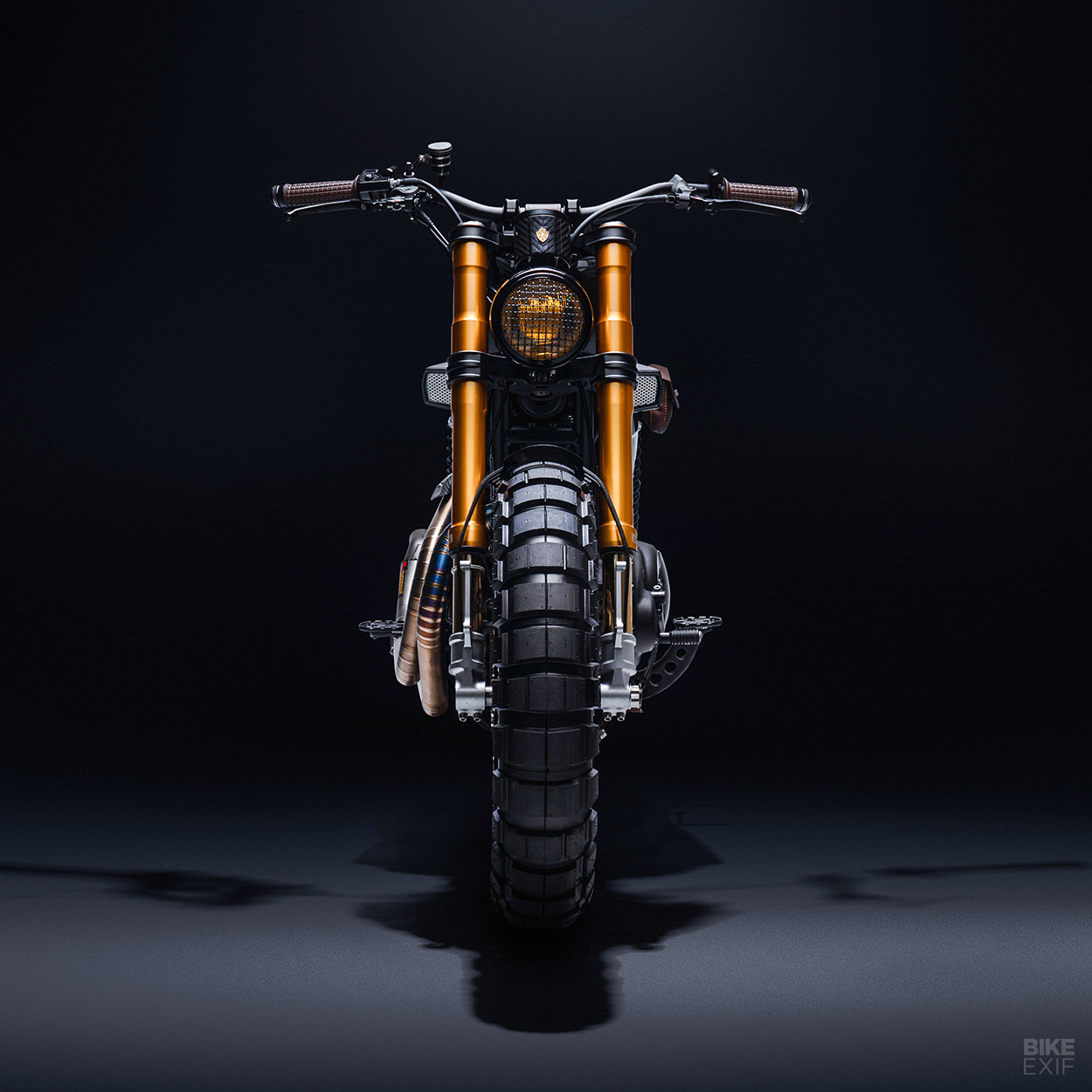 “It went absolutely viral on social media because people just loved it. Knobby tires, great suspension, great brakes and an American soul. With a V-twin motor that actually felt in harmony with the rest of the motorcycle.”

As Chet built more Muscle R bikes, he was testing improvements. “I started getting into engineering with a friend, Joan Mataro. We invested in 3D printers, scanners and software.” But the idea for the Muscle R2 remained the same: A Sportster that had real power, braked and turned, and had an elegant, mean stance. 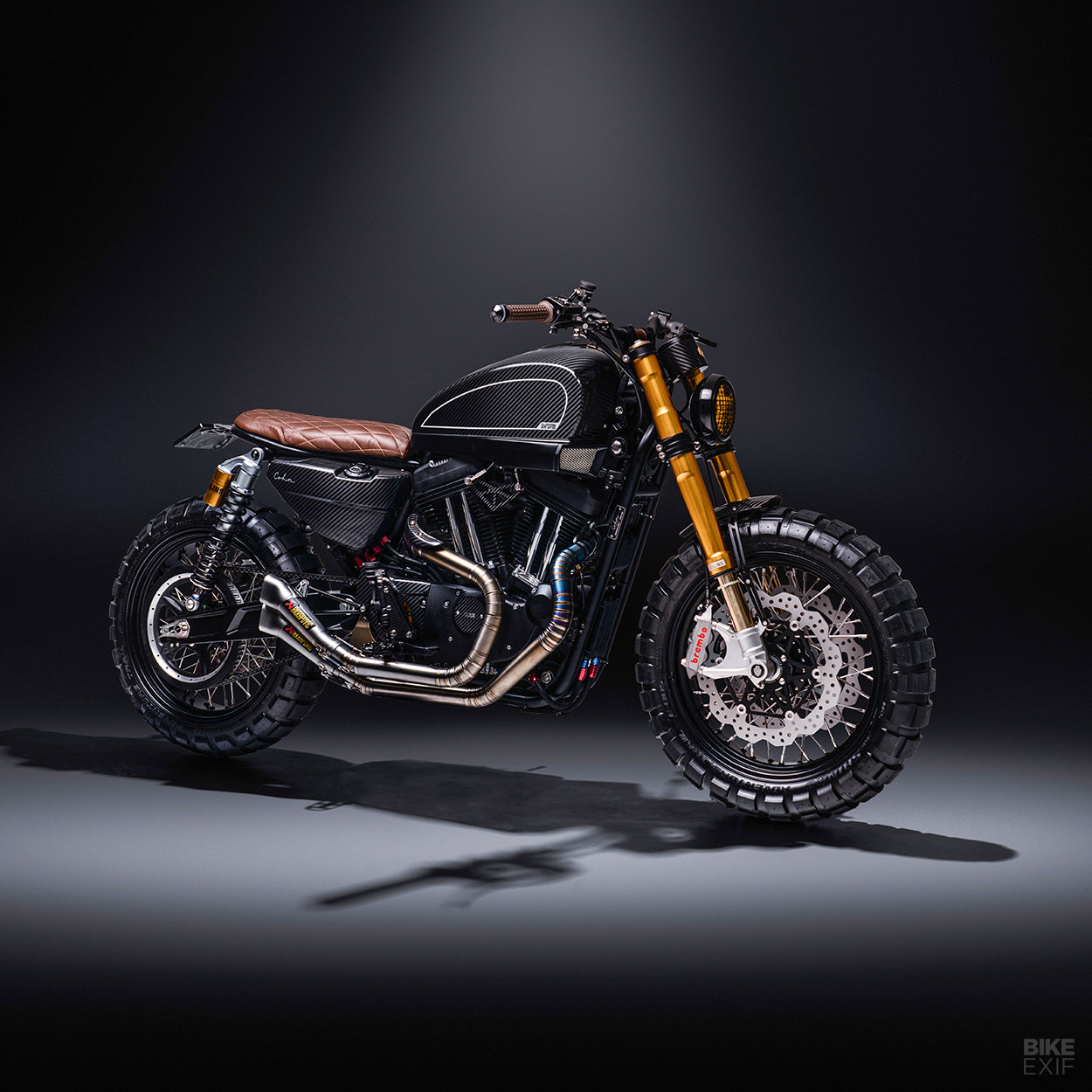 Using a Peel 3D scanner, Chet and Joan scanned a rubber-mounted 1200cc motor from the latest XL Sportster model, plus the OEM frame and the frame from a XR1200. “These scans gave us a ‘mesh’ with millions of points. We developed a proprietary frame with an aggressive look that does not compromise comfort, and handles turns in a spectacular fashion.”

After virtual testing and simulation, Chet and Joan 3D printed several frames out of tough PLA, with similar angles to the original XR1200. “Josh Lewis, our master welder, did an impeccable job in setting up a jig and making the first prototype frame. We can now build as many frames as we need, in any alloy. We are currently offering a titanium Grade 5 alloy frame to future MR2 owners.” 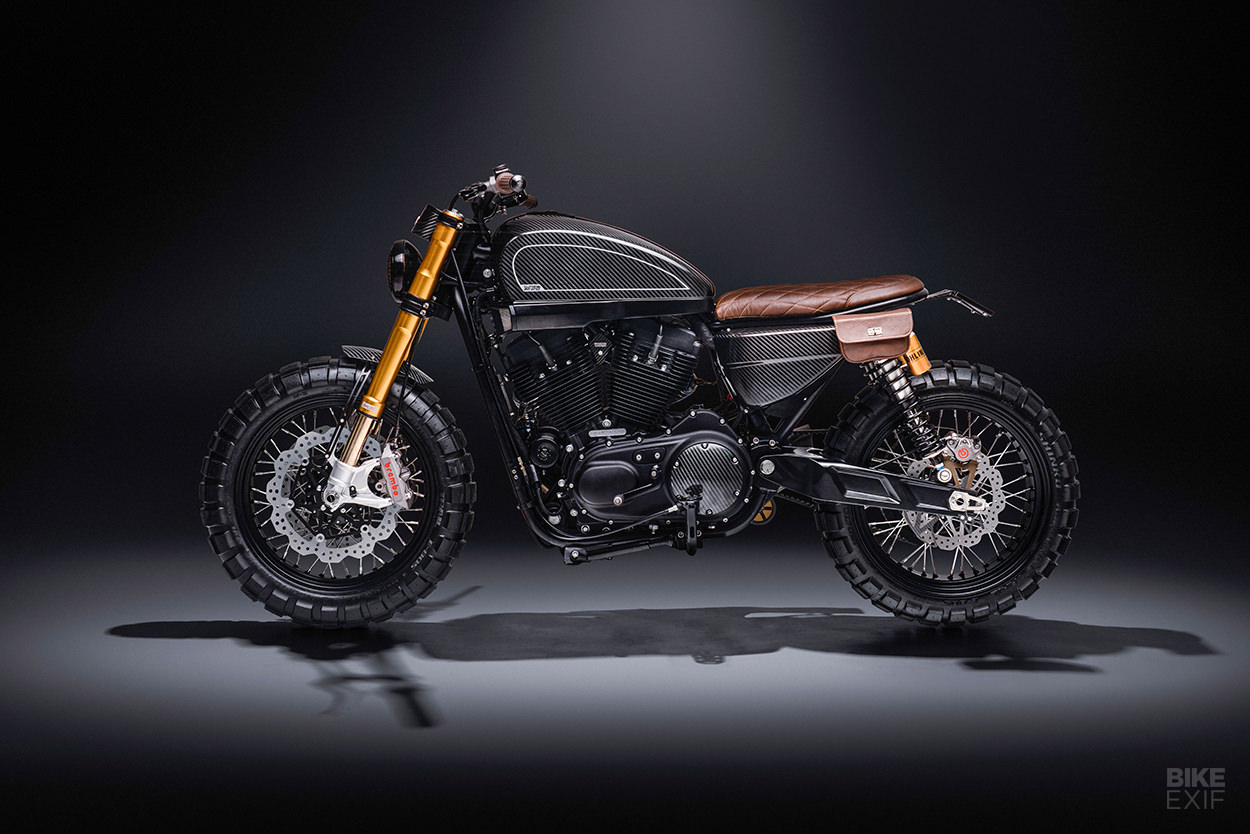 Next was the journey of designing a five-piece swingarm that could be welded and adjusted for a client’s height. SolidWorks software was used to simulate different forces, and David Sanchez of BottPower provided engineering help.

“We also had a current engineer from Aprilia inspect and simulate our final piece,” says Chet. “This is one of my favorite parts of the bike, because I love the hollowed X sections on the inside of the swingarm. Hard to appreciate with the rear wheel on though!” 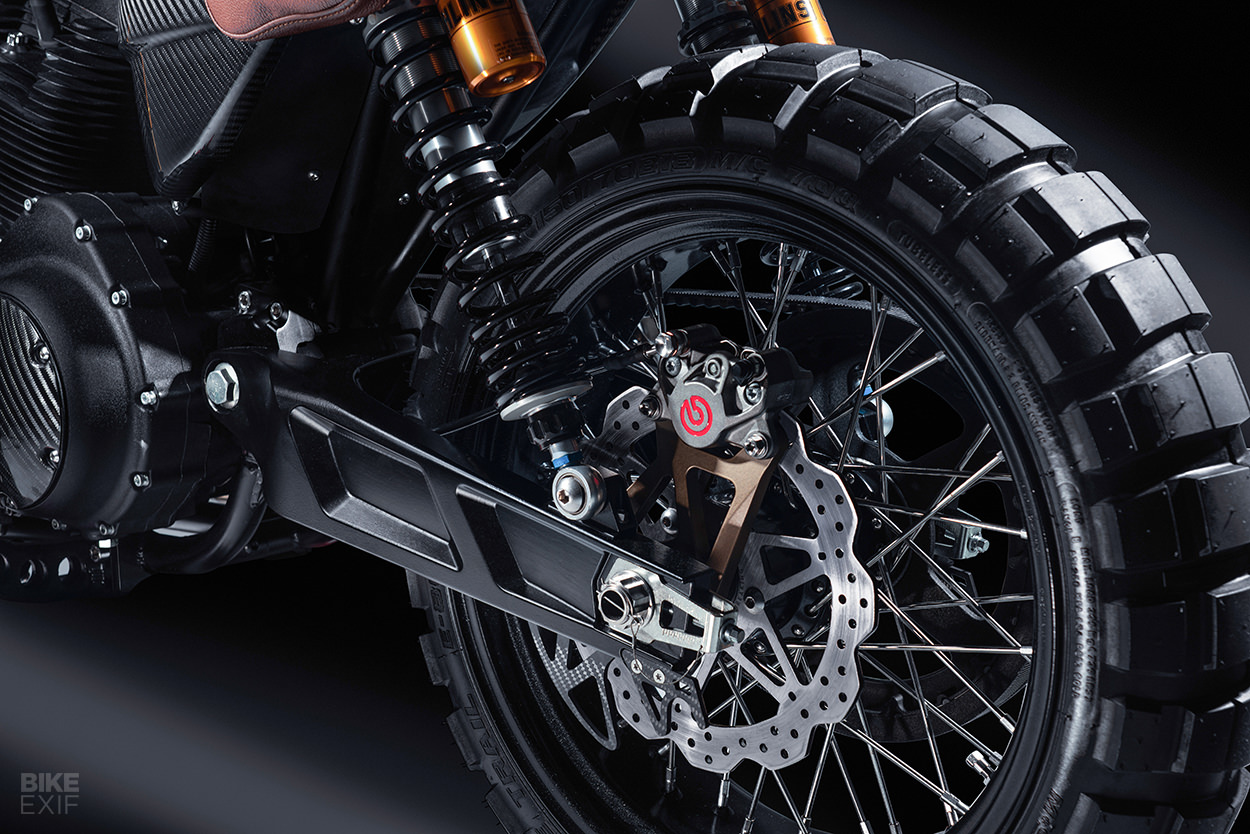 Cohn Racers have used Öhlins for suspension since day one, and for the Muscle R2, they helped to select the best FGRT fork setup and rear suspension to fit every MR2 owner. “We also designed a set of triple clamps that are CNC-machined out of billet aluminum, with the right offset to tuck in the headlight and speedometer,” says Chet. “Being able to model things on CAD lets you work ahead.”

The Brembo-based brake system was trickier. “I could not find any disk brake on the market that would fit the bike, so with a piece of paper and a compass we started playing around with different patterns and we came up with a really unique design,” says Chet. “We went with floating 330mm front disks and a 260mm solid version for the rear.” 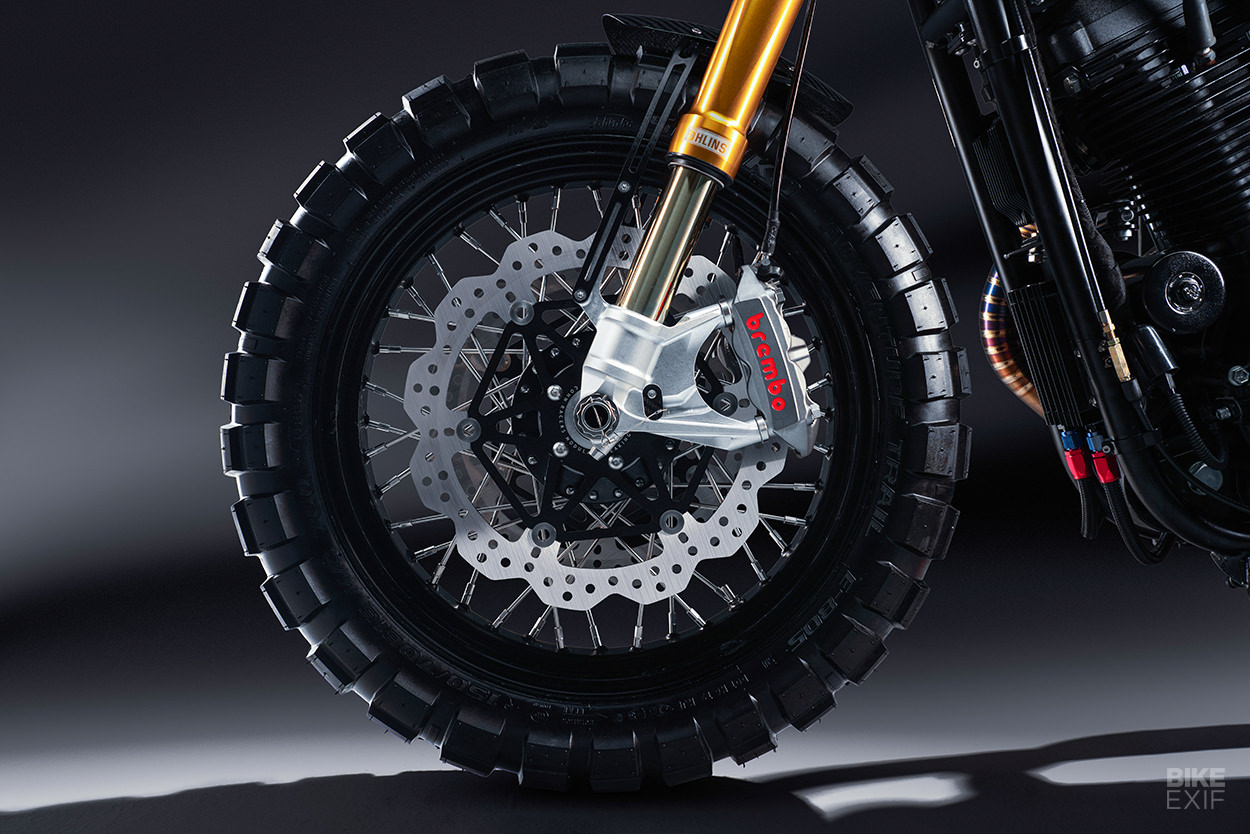 For the wheels, the crew has used Harley hubs with a custom set up to fit 18-inch spoked rims—6 inches wide at the back and 3.5 at the front. “It gives the bike a flat track feel, which was the whole intention of the original XR models from Harley Davison,” says Chet.

“There are many tire choices that would fit, but for some reason clients keep going for dual sport tires. They are super soft and have decent grip, but we’re excited to build an MR2 with street tires to push its real limits soon.” 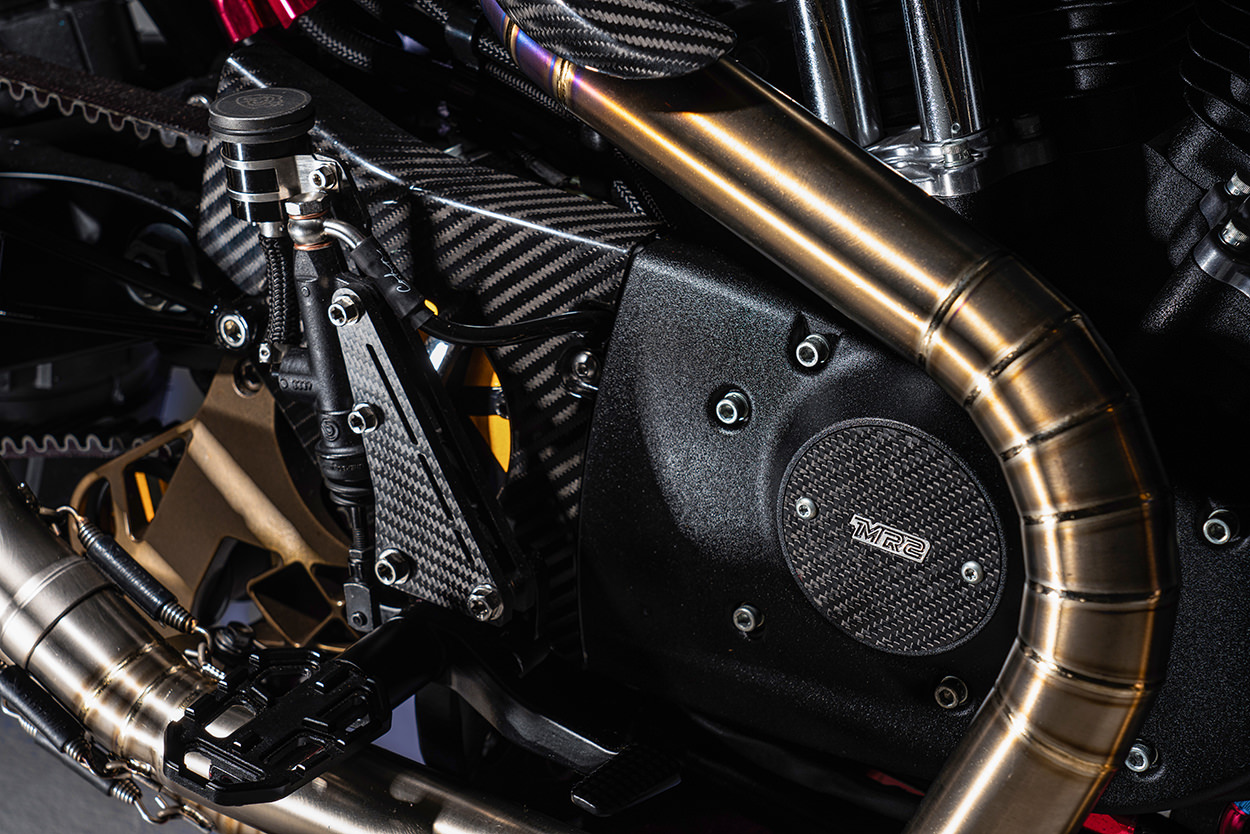 The air-cooled Evolution V-Twin engine now musters more than 100 horsepower on 93-octane gas, but Cohn Racer’s mods do not compromise reliability. Aside from ECU trickery, the biggest change is a downdraft air intake system using a new manifold: it’s CNC-cut from an aluminum block with a 6-axis machine. Two large ducts catch way more air than stock and at the other end, spent gases exit via a full 2-into-2 titanium exhaust. It’s finished with Akrapovič titanium mufflers.

Less obvious is a small oil cooler plumbed into the original oil tank under the seat, which ensures a plentiful (and cool) supply. Chet has also kept the original battery setup—“which opens doors for people that don’t want to rely on lithium batteries.” Fuel is housed in a tank crafted from laser cut 2mm aluminum sheet, bent and welded together. 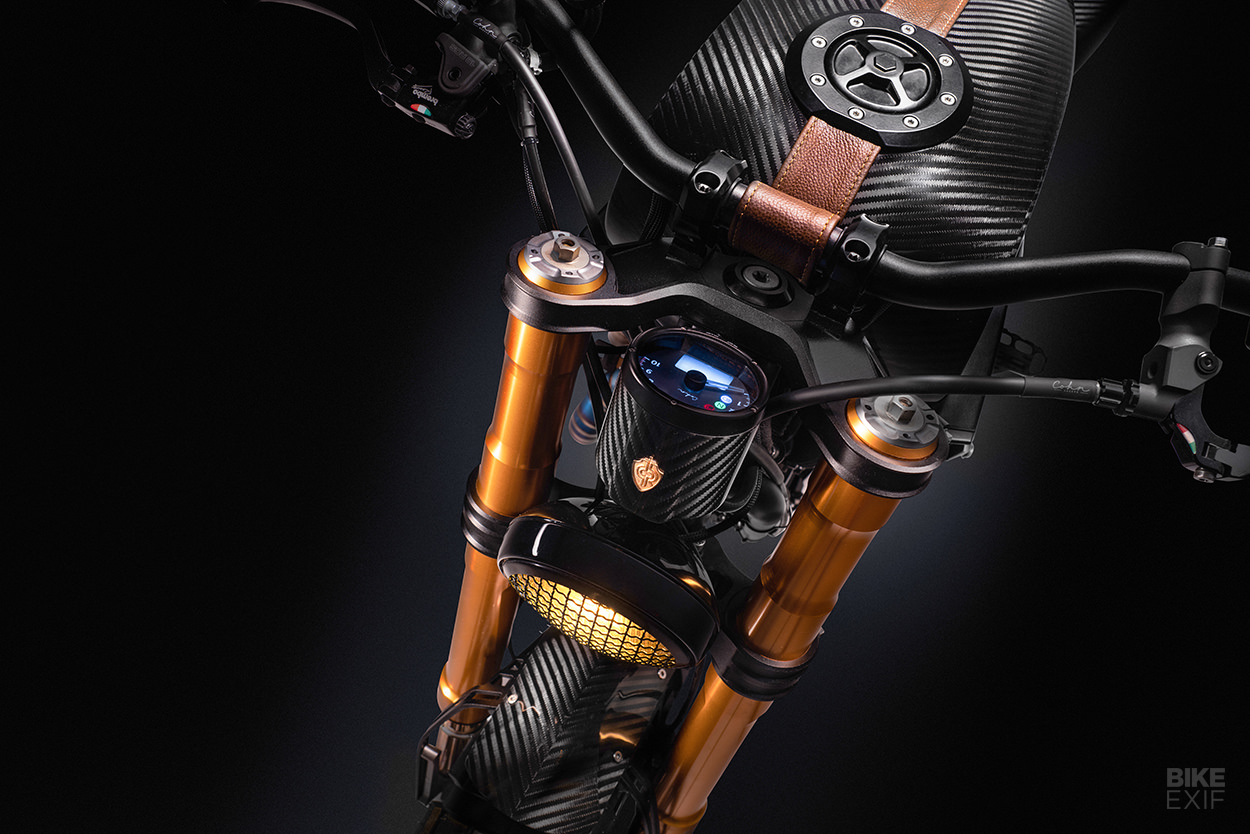 Carbon weave is everywhere, and beautifully made. “Anton, our carbon fiber guy, worked for the Scuderia Toro Rosso F1 team and Koenigsegg in Sweden,” Chet reveals. “The MR2 has over 20 parts using pre-impregnated carbon fiber and cured in an autoclave.”

“It’s one of the most expensive processes for making composite parts, but it will ensure the perfect content of resin per fiber—and makes the visual side exceptional. Paint jobs are something we offer in collaboration with many artists, and can mix the exposed carbon with really special designs.” 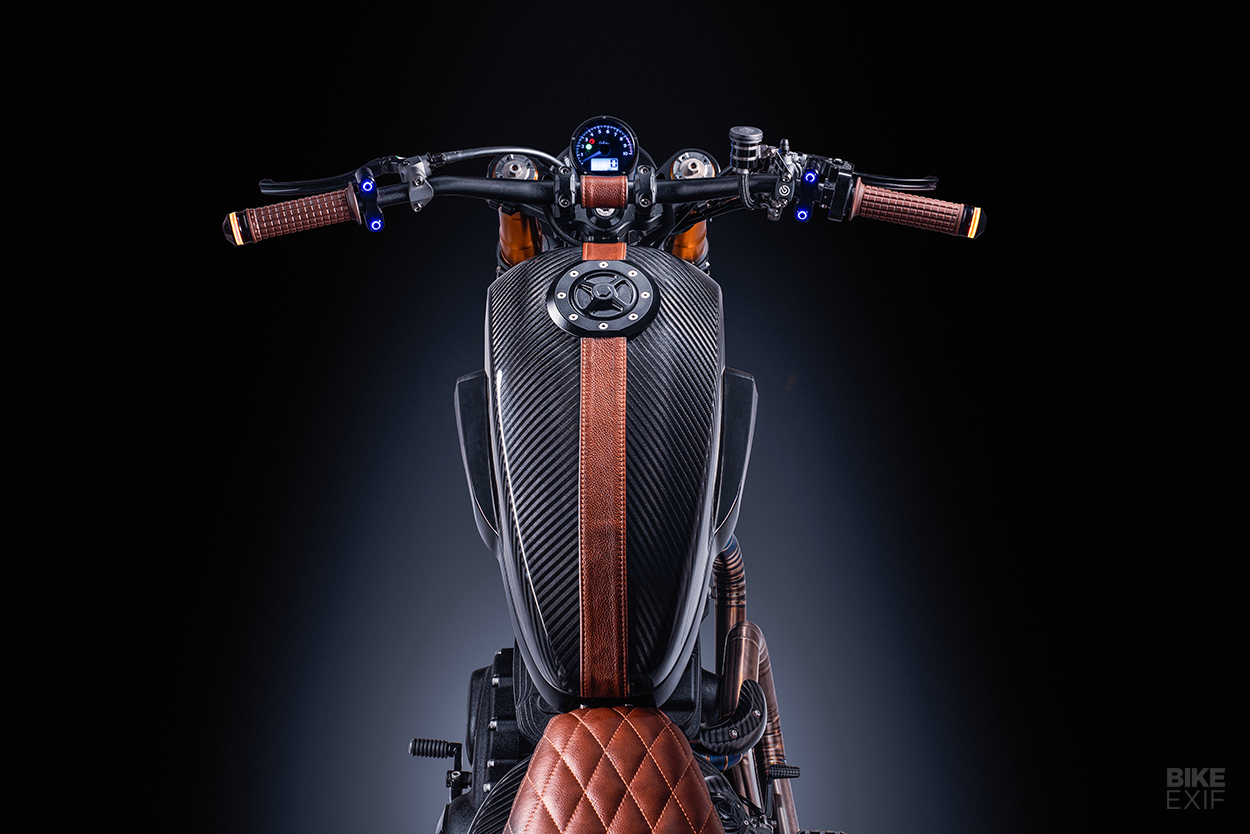 The same care has gone into the cockpit experience. A specially designed multi-function display shows RPMs in analog format and other information digitally. And the logo on the carbon fiber cover is cast in 24k gold from a wax mold by a master jeweler. (“He polished the piece with several compounds to achieve maximum shininess.”)

The aluminum handlebars are custom made, with cabling run inside, and the switchgear lights up in blue for easy operation at night. The legal-necessity lighting is discreetly integrated, with the rear fender using just two parts to hold all necessary light units as well as the license plate holder. 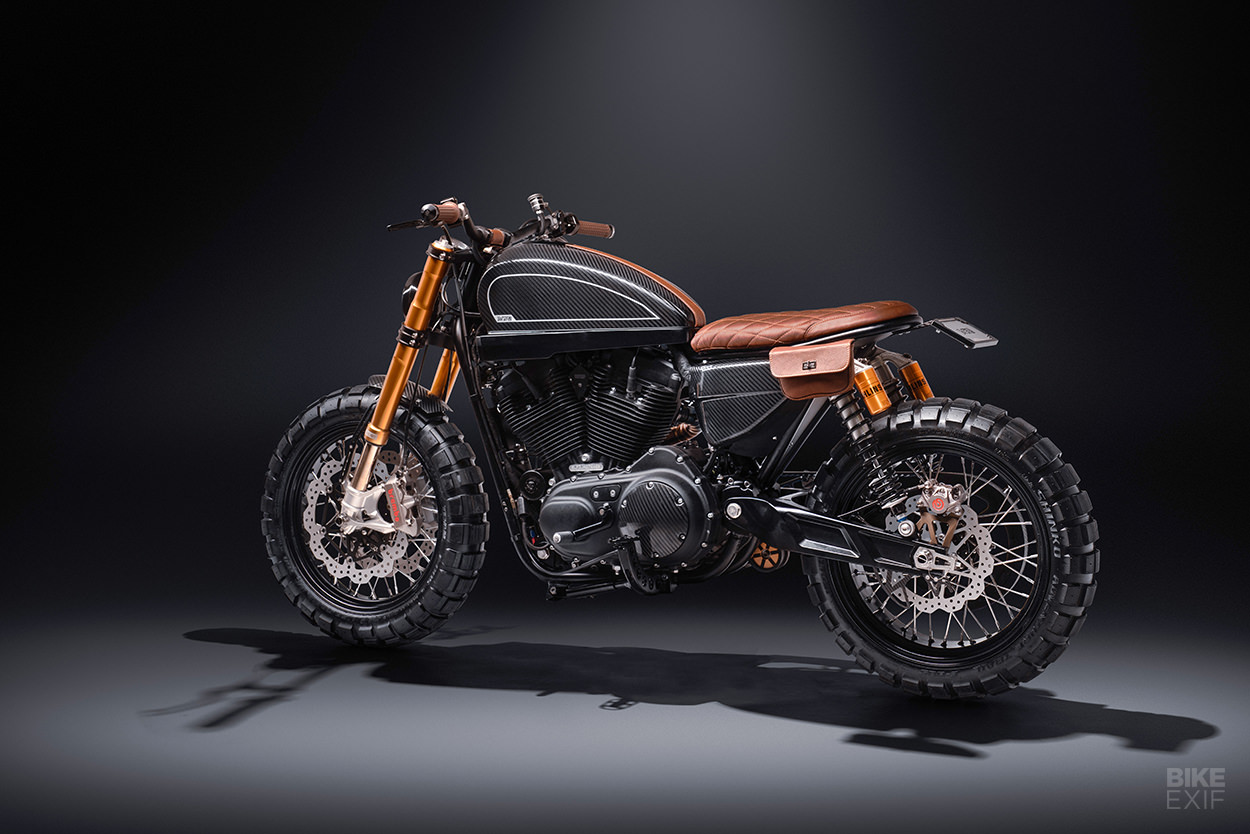 The paint is not the only aspect of this Harley that can be modified: every client also gets to choose the hide for the leather seat. “We typically source our leather from Scotland, but this will depend on the client’s vision,” says Chet. “The leatherwork is carefully curated by our artisans. It defines the handcrafted process.” And if you want your MR2 further tailored to your tastes, Chet is happy to talk.

“We also tune and set up every bike for each client,” Chet says. “We adjust things such as ride height, suspension stiffness and other small details that will make the rider as comfortable as possible.” 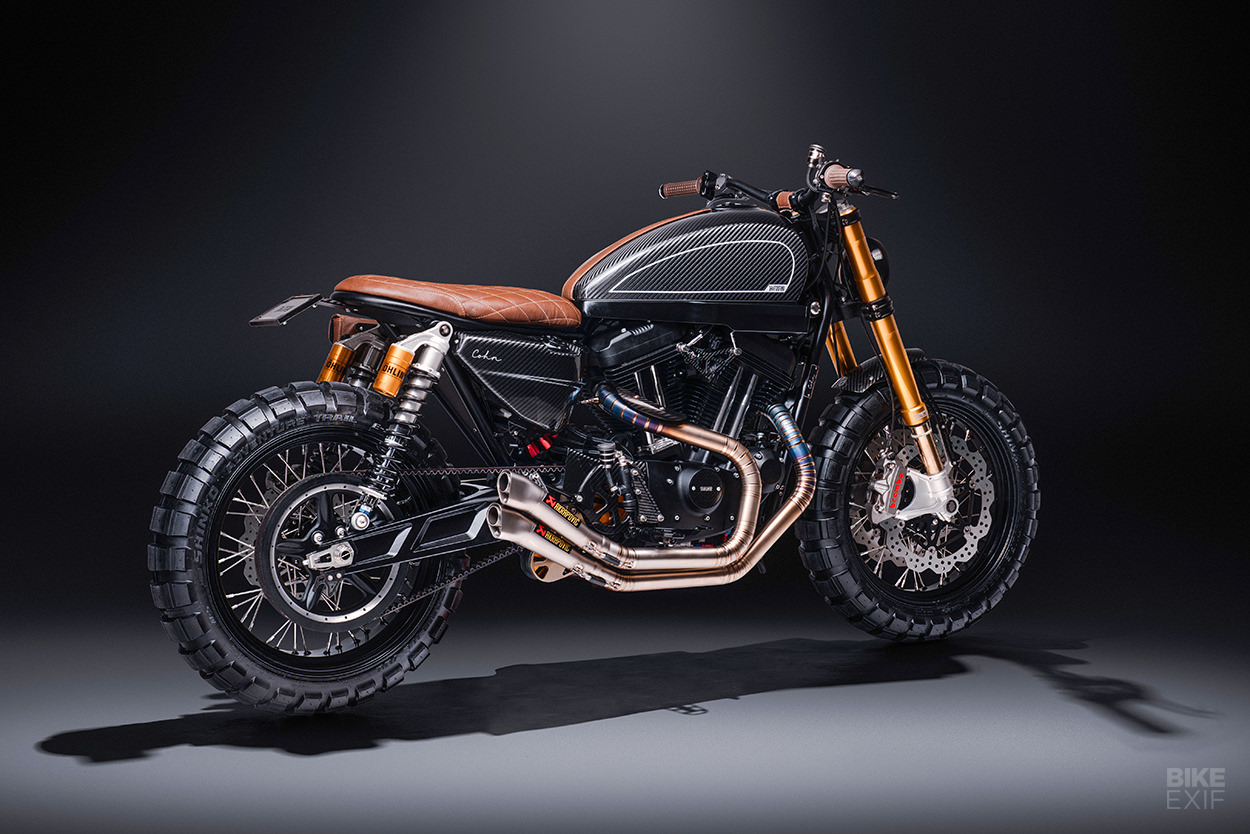 As an aside, Chet is already working on his next venture, which will have four wheels rather than two. “We will be unveiling an incredible car that we’ve developed this year,” he reveals. “So we’re looking for investors who share the same passions that we do, to keep growing this new phase.”

If you’re salivating at this point, you’re probably not the only one. The first Muscle R series was in big demand, and one client has already sold his at a profit. Cohn Racers have now started building the first batch of MR2s, with nine orders already on the slate and production limited to 99 units worldwide. Pricing will start at $45,100 but will likely rise as demand increases.

A matching Cohn Racers bike and car parked together sounds like a dream garage to us. Interested parties, form a queue. 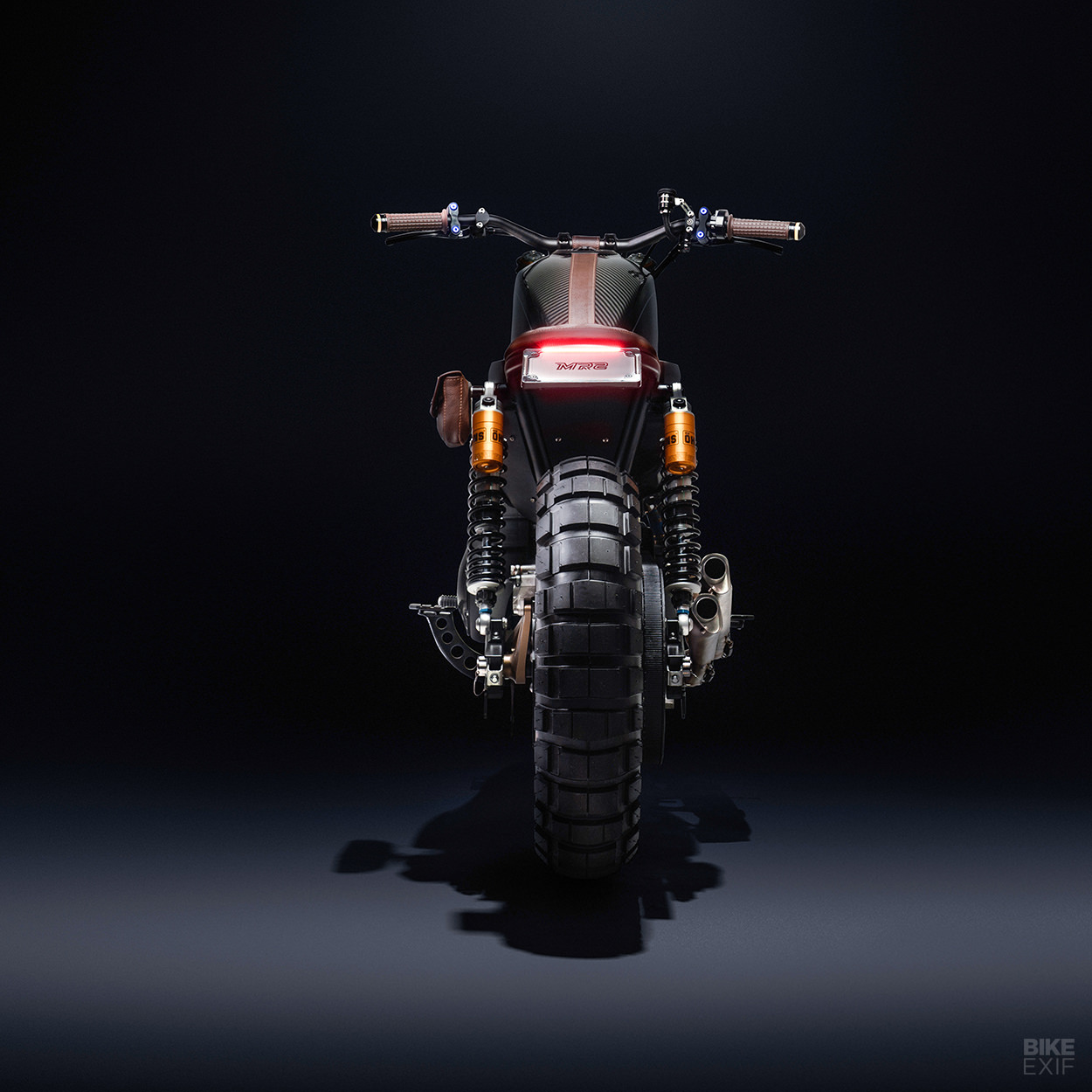