Arjan van den Boom is one of Europe’s most successful customizers. The founder of Ironwood Motorcycles has well over 50 builds to his name now: proof that his business skills are as good as his eye for style.

This sharp-edged K100 is the latest BMW to roll out of the doors of his workshop in Almere—the Netherlands’ newest city, built on reclaimed land. And it looks like a million Euros. 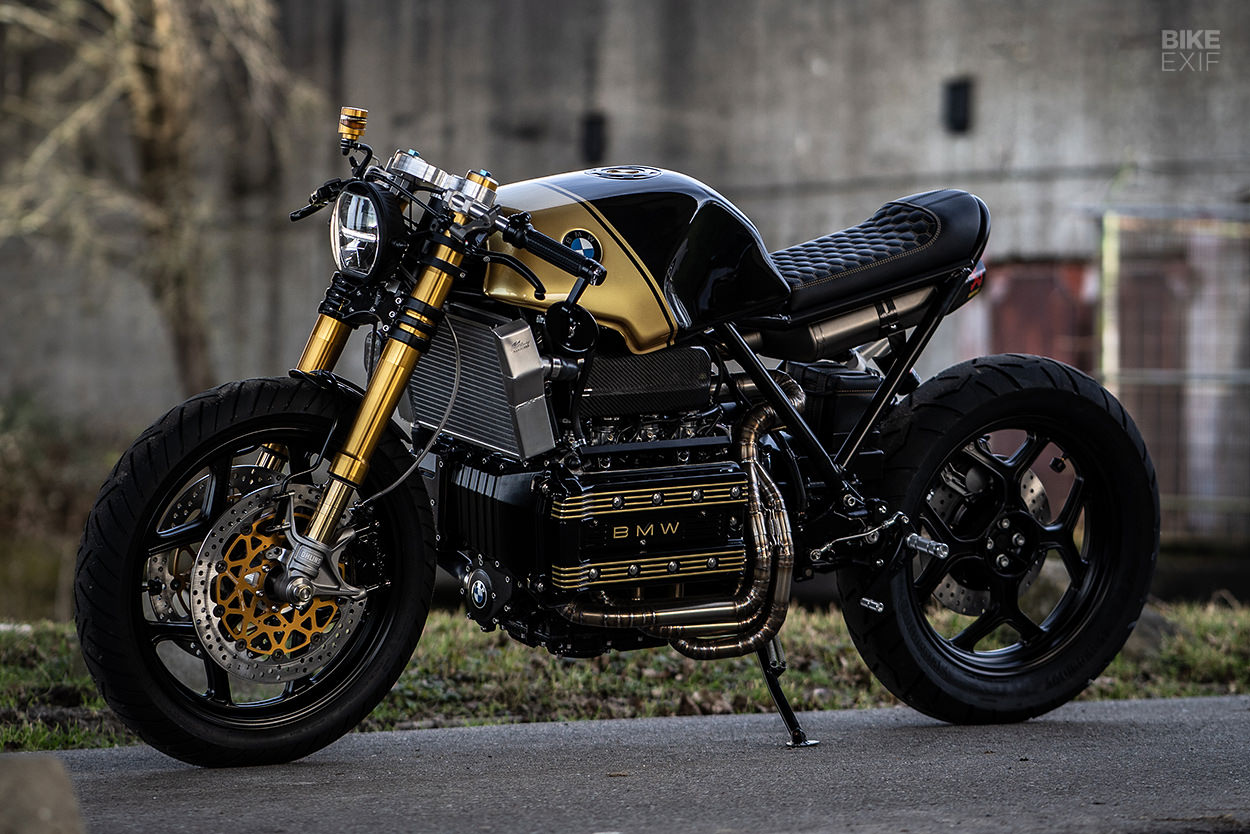 A big part of Ironwood’s success comes from the company’s hyper-graphic style—usually combined with a stubby seat and aggressive nose-down stance. It’s a controversial look but we like it, and few do it as well as Arjan’s crew.

The story of this 1987-spec K100 started in late 2019, just before social distancing added a whole new layer of complexity to the business of building customs. 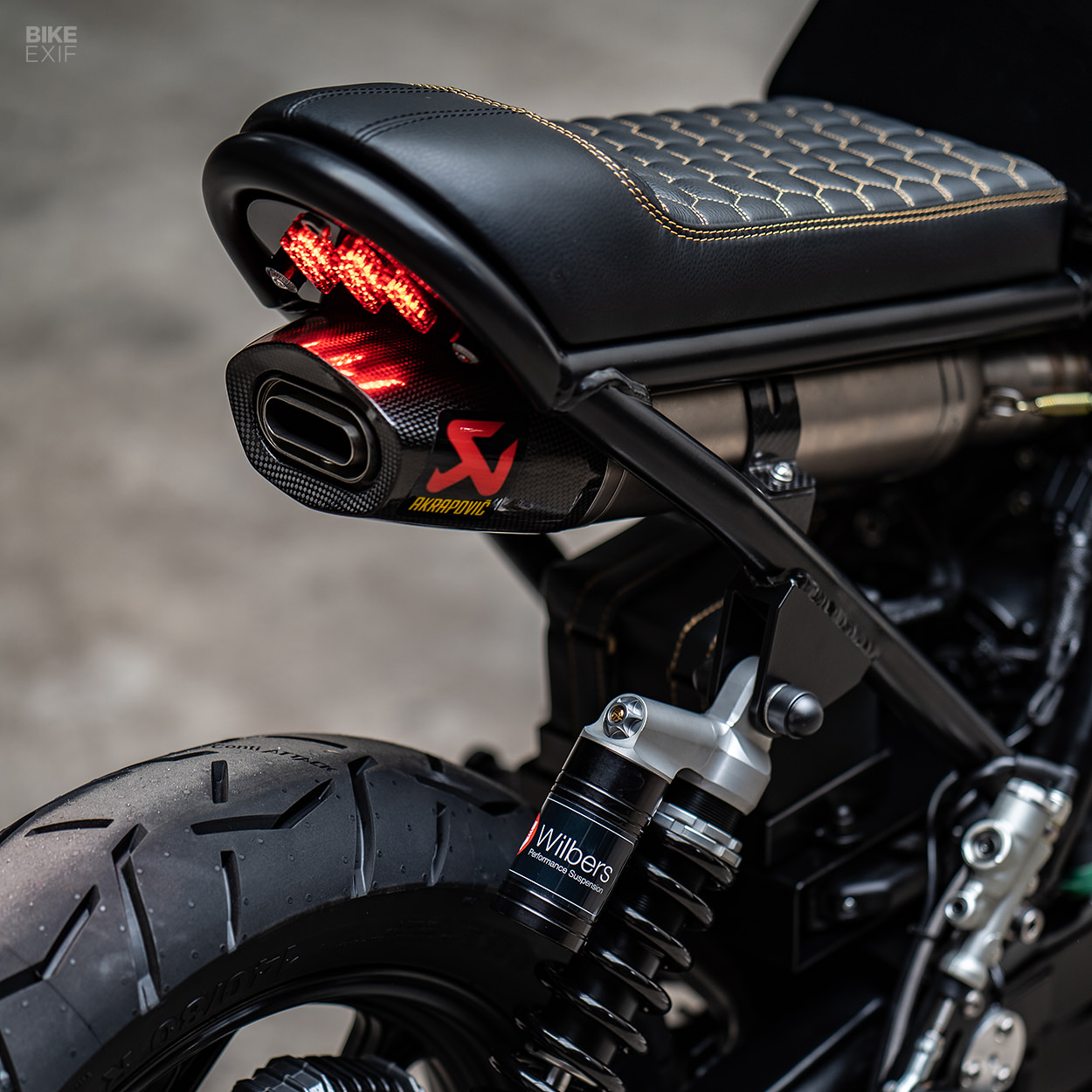 “About eighteen months ago, we were contacted via Instagram—which is where 90% of our orders come from,” says Arjan. “The commission came from Germany, and we started tinkering on an unloved ‘flying brick’ that our customer brought to us.”

“We knew this would be something special, even before the actual tear down. Our German customer was inspired by our R80 Mutant, and wanted a similar look and feel but on a K100 base.” 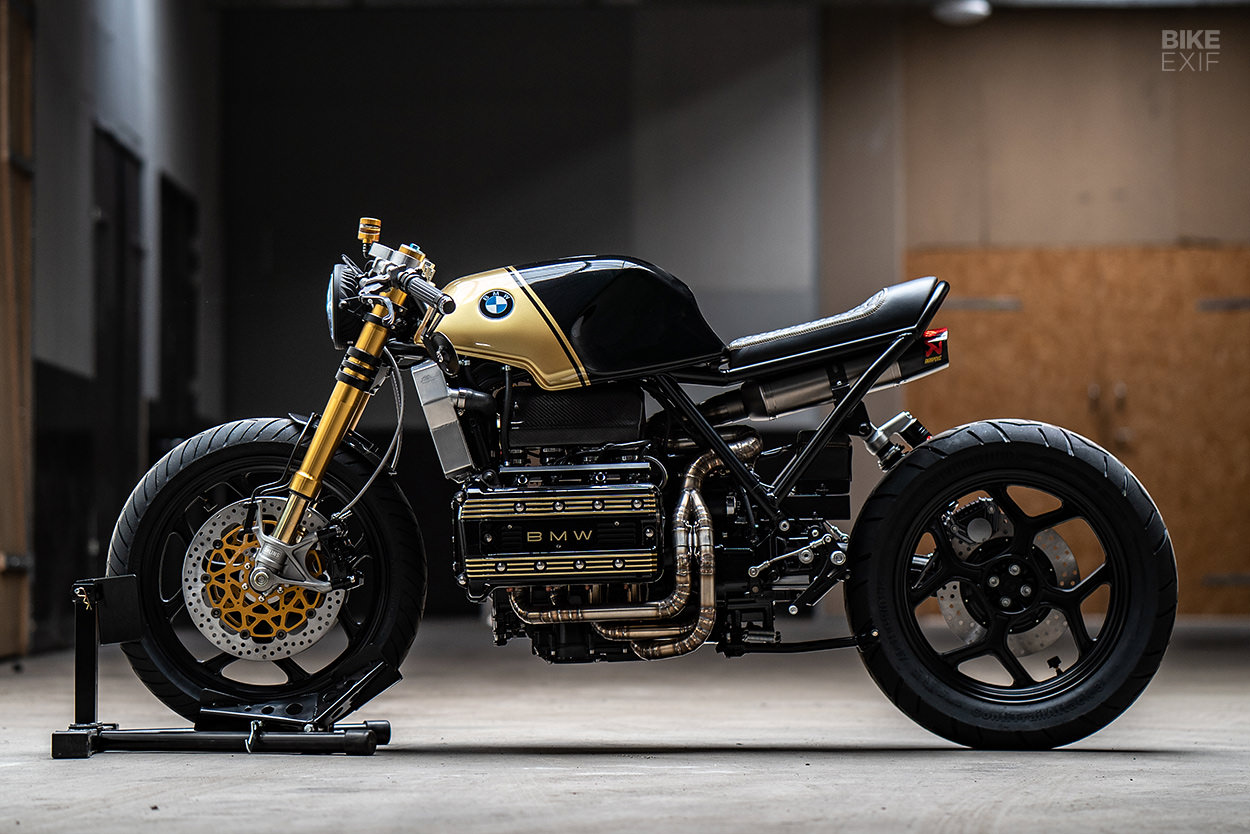 “Our goal was to create the same ‘boldness’ with this oilhead as we did years ago on the R-series. The same stance, lines and finish.”

With the 90hp inline four sport tourer up on the bench, Ironwood started by de-tabbing the frame and removing everything deemed to be redundant. Then they removed the forks and triples, and installed the complete front end (with Öhlins USD forks) from a Ducati Panigale. It’s slotted in using custom CNC-machined aluminum triples, which have an integrated Motogadget speedo. 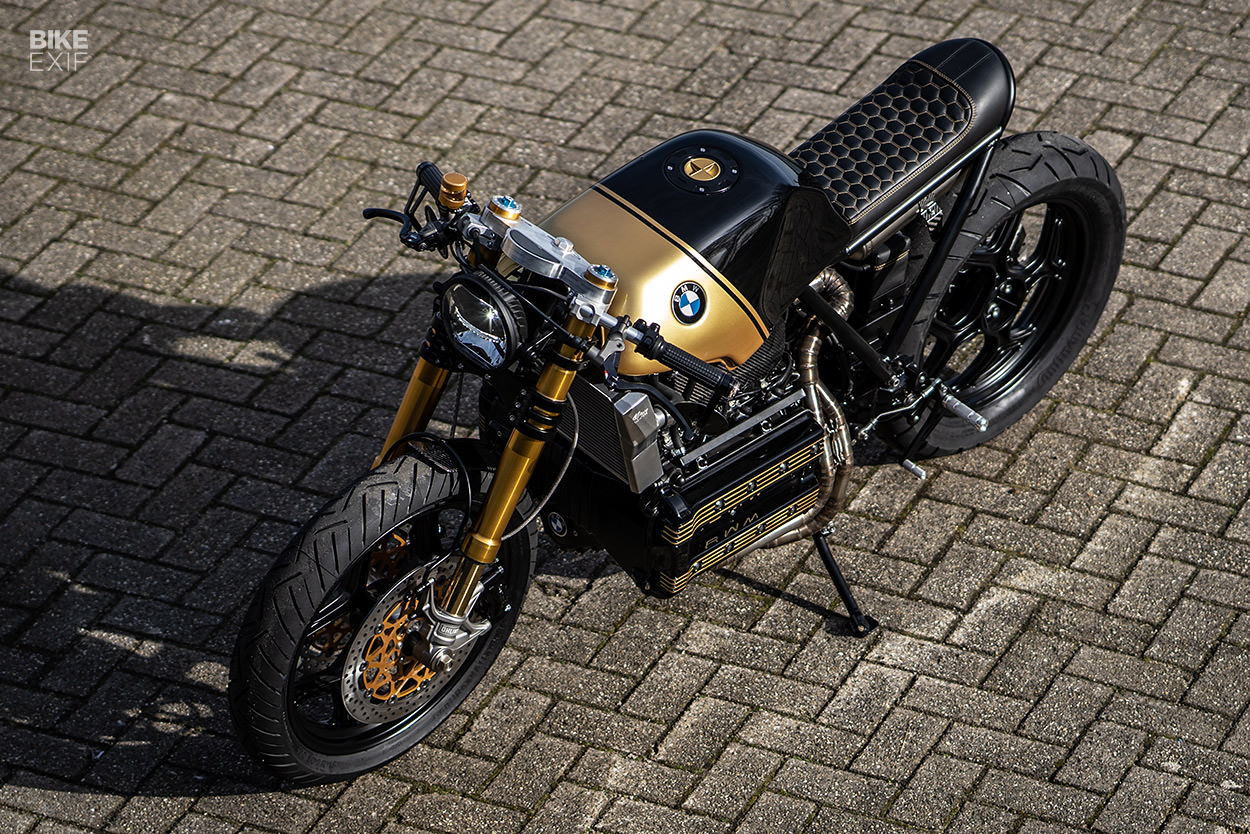 Ironwood have stripped the 987 cc DOHC engine down to the crank and replaced most of the innards with OEM parts. “It’s new outside and in,” says Arjan. “We did the same for the gearbox and shaft drive.” 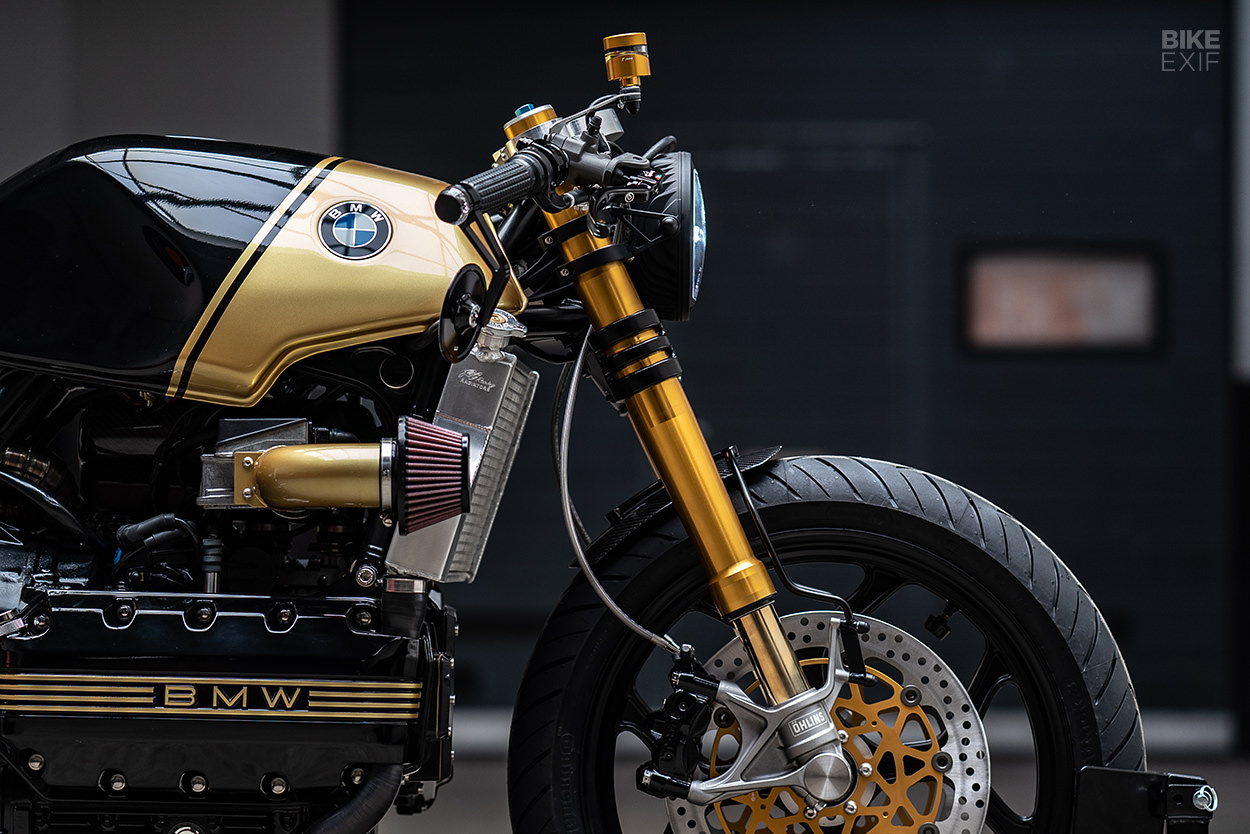 Ancillary parts were dispatched to Paul Fill of Kustom Moto in the UK, who overhauled the starter motor, alternator, coils, and throttle body. When everything went back on, Ironwood added a DNA filter to increase airflow to the engine. 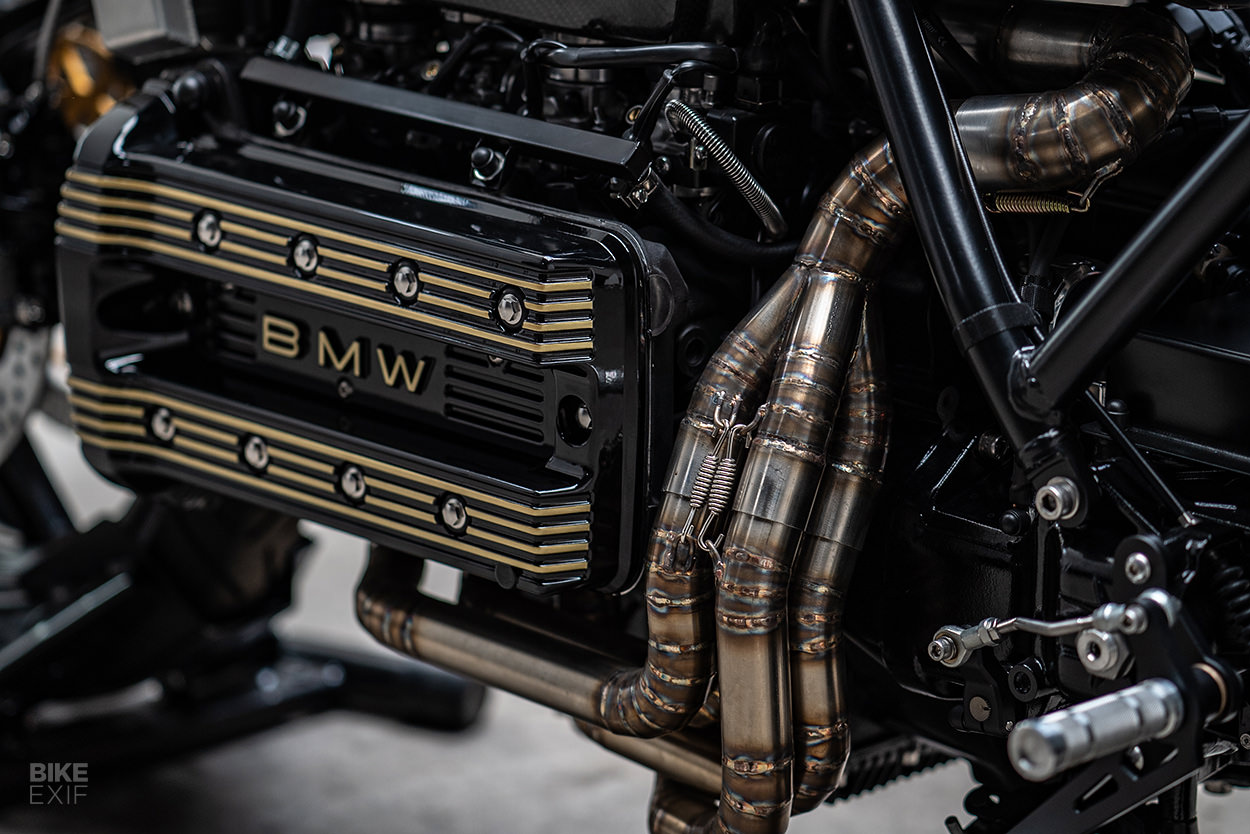 The engine management is upgraded too. This particular motor is blessed with bigger injectors, a remapped SC Delta ECU from BSK Speedworks, and a race-spec radiator. An Akrapovič muffler was liberated from a Honda CBR600RR, plumbed into segmented piping (“from old schoolfriend Mervin”) and a manifold from Fabio Senesi of SeSfactory.

Right above the muffler, and sitting perfectly parallel, is new framework supporting that signature stubby seat. The black leather upholstery is way beyond OEM quality, and was handled by Jeroen Bouwmeester of Silver Machine.

A new Wilbers shock keeps the back end planted, with the help of sticky Continental tires. (The stock wheels have been refurbished and powder coated black.) Final tweaks included custom rear sets and a new gas cap from Timothy at CNCPT|MOTO.

It’s hard to go wrong with black and gold on a motorcycle—or racing car, for that matter. But the finish on this K100 is one of Ironwood’s best. 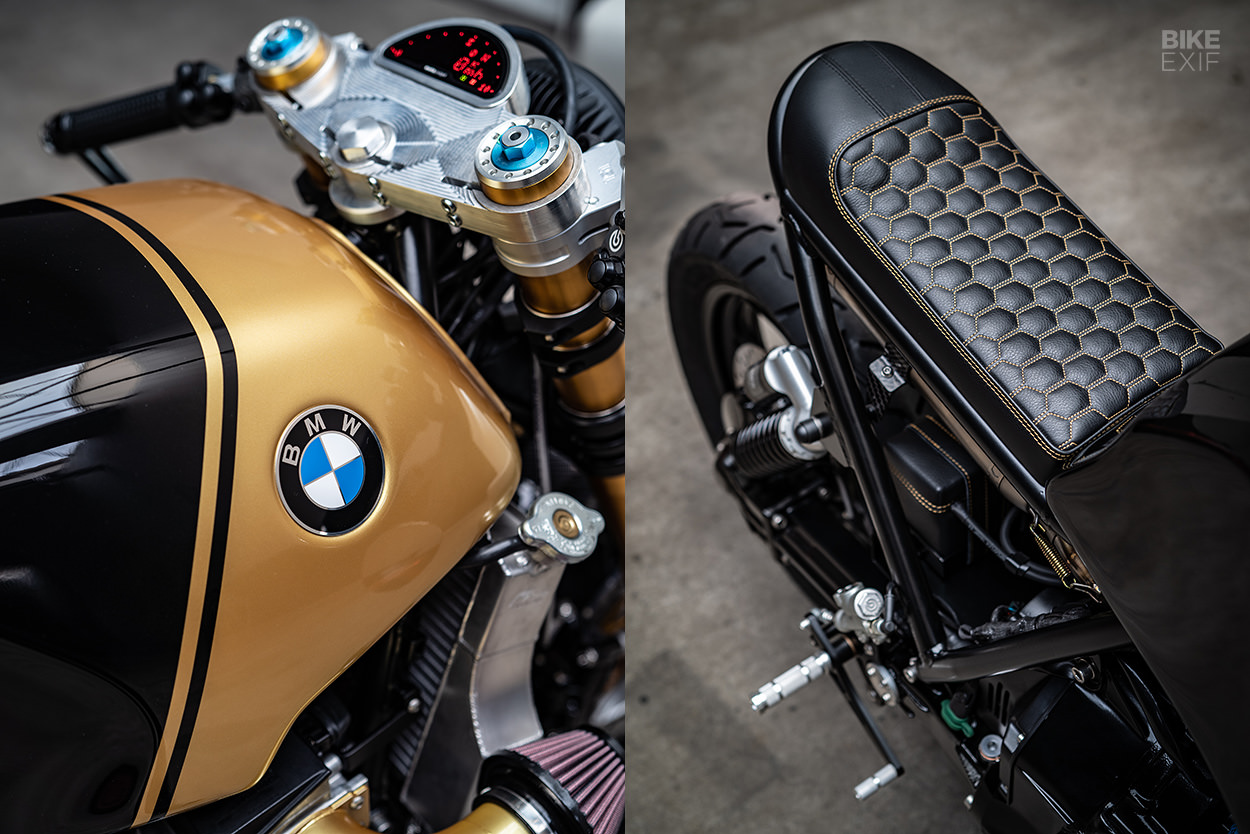 It was applied by Jacco from Royal Kustom Works, who not only handled the tank, but also the air intake and engine covers. “His impeccable skills highlight every build we deliver,” says Arjan.

One of the secrets of success is to surround yourself with good people, and Arjan obviously knows it. But there’s more to the Ironwood story than that: very few builders can maintain quality and a prodigious output. On the basis of this K100, we suspect there are a few more chapters in the Ironwood story still to be told.