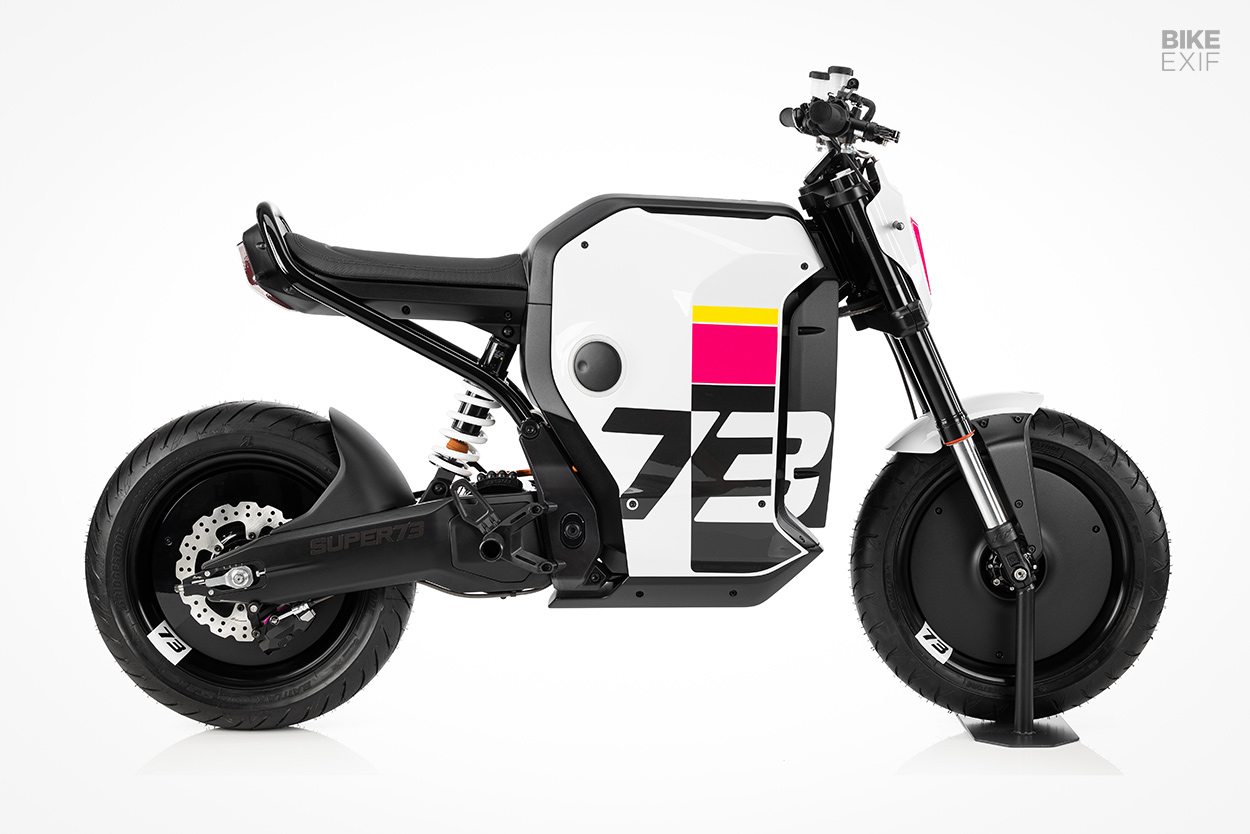 We’ve had our eye on Super73 for a while. The Californian company’s electric bikes are cheeky and fun, bridging the gap between bicycles and motorcycles to focus on accessible two-wheeled mobility. Now they’ve cranked it up a few Watts with the reveal of the Super73 C1X concept.

The C1X is Super73’s bid to add bonafide electric motorcycles to their already popular e-bike range. So it doesn’t have pedals, can go 75 mph (claimed) and requires a motorcycle driver’s license to ride. Plus it looks rad, too. 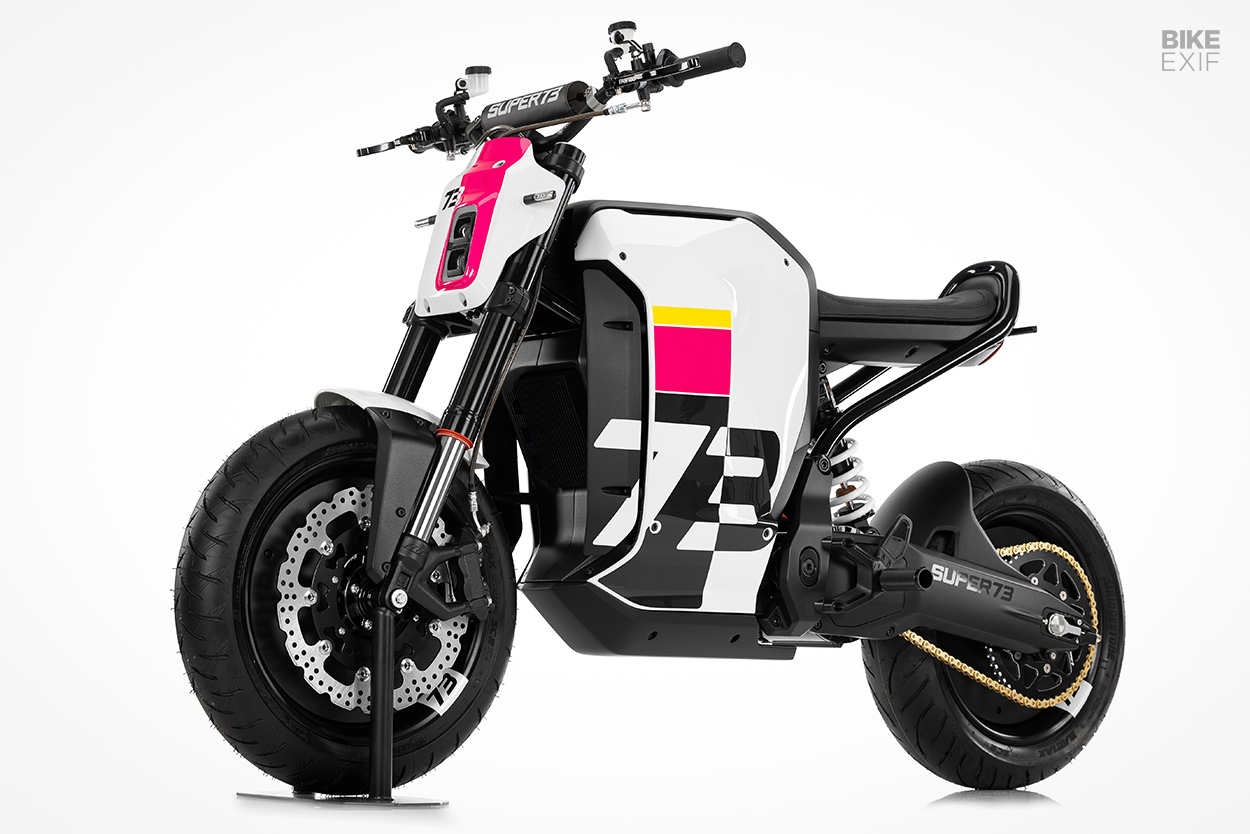 Super73 designed the C1X in response to direct feedback from their customer base. They found that a third of their existing riders wanted to step up to a street-legal motorcycle. So while other motorcycle manufacturers are trying to figure out how to get new riders onto two wheels, Super73 are figuring out how to keep them in the fold.

Because it’s designed as a next step for riders already on Super73’s smaller e-bikes, the C1X is deliberately compact. It actually has similar proportions to their current flagship e-bike, the RX, and there’s even a nifty interactive tool on their website, that lets you compare your height to the bike’s size. 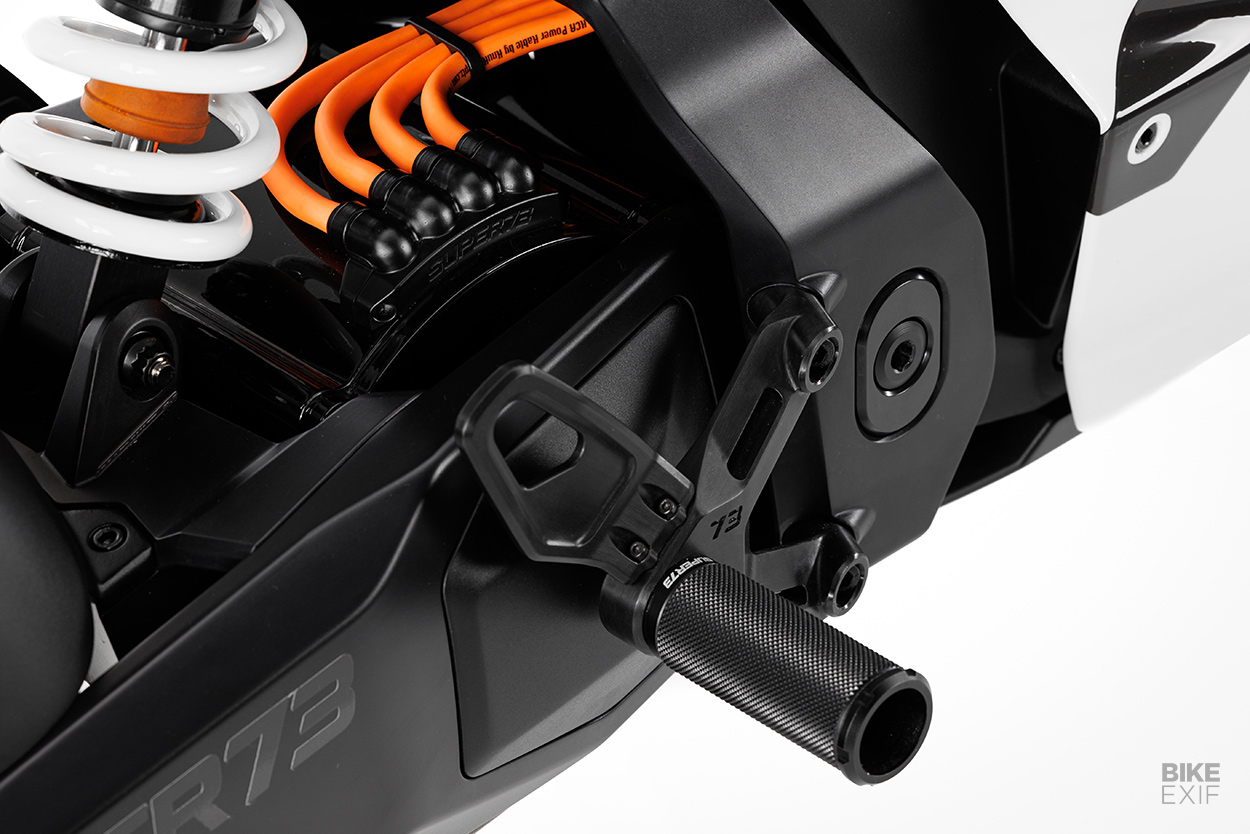 To get there, Super73’s design team started by researching current production motorcycles, to figure out what aspects of them stopped potential new riders from taking the plunge. A smaller overall footprint became one of their top priorities—informing many of their design decisions.

That’s why the C1X rolls on 15” disc wheels, rather than more common 17” hoops. The motor also sits just behind the swingarm pivot point, bringing the wheelbase down to 51” and eliminating potential chain slack issues. It’s an intriguing design, and one we’re curious to see in action. 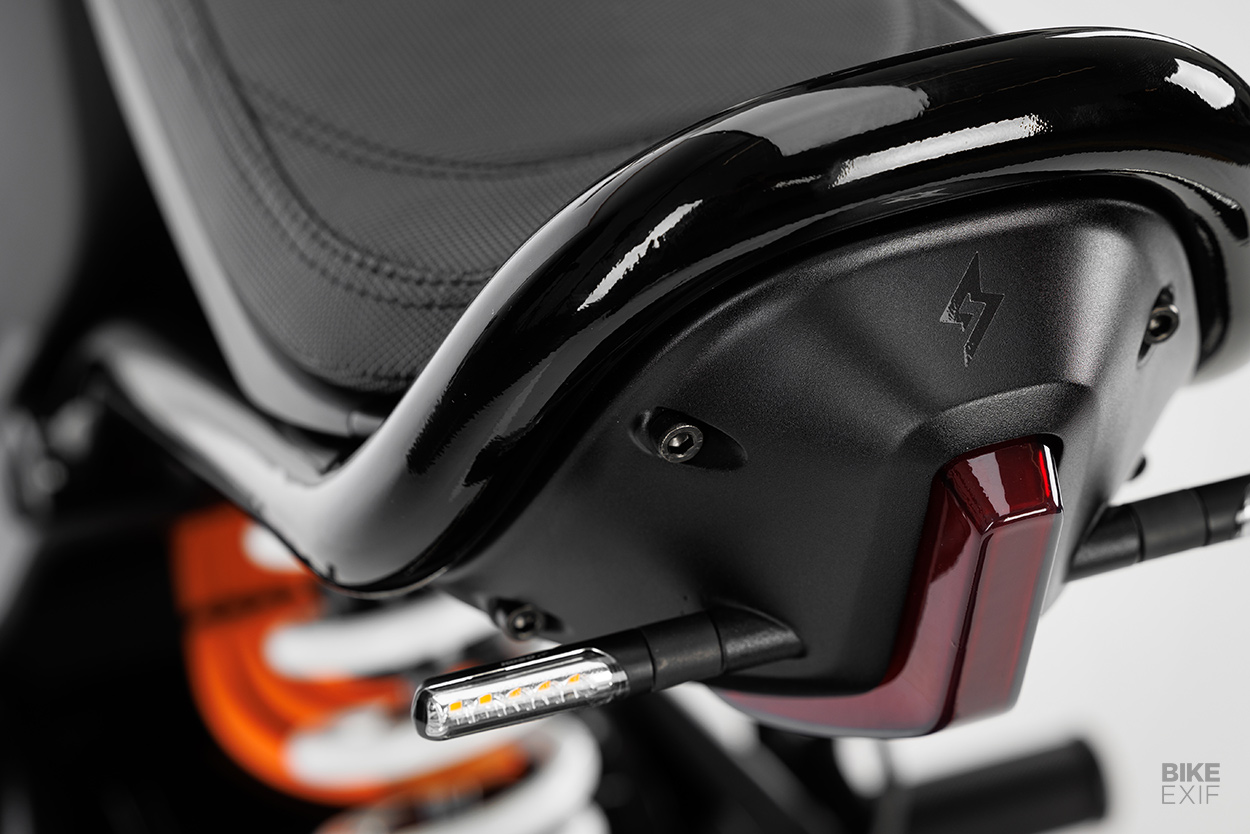 We’re fans of the C1X’s visual design too. We’re picking up strong supermoto, flat tracker and BMX vibes, with clean lines and a fresh livery. The kicked up subframe is a neat touch, and the sleek LED lighting adds to the overall minimalism that Super73’s designers were clearly aiming for.

That chunky block in the middle hides the battery, and gives a hint to the C1X’s engineering too. Super73 haven’t revealed too much detail, but cite mass centralization as the reasoning behind the layout. 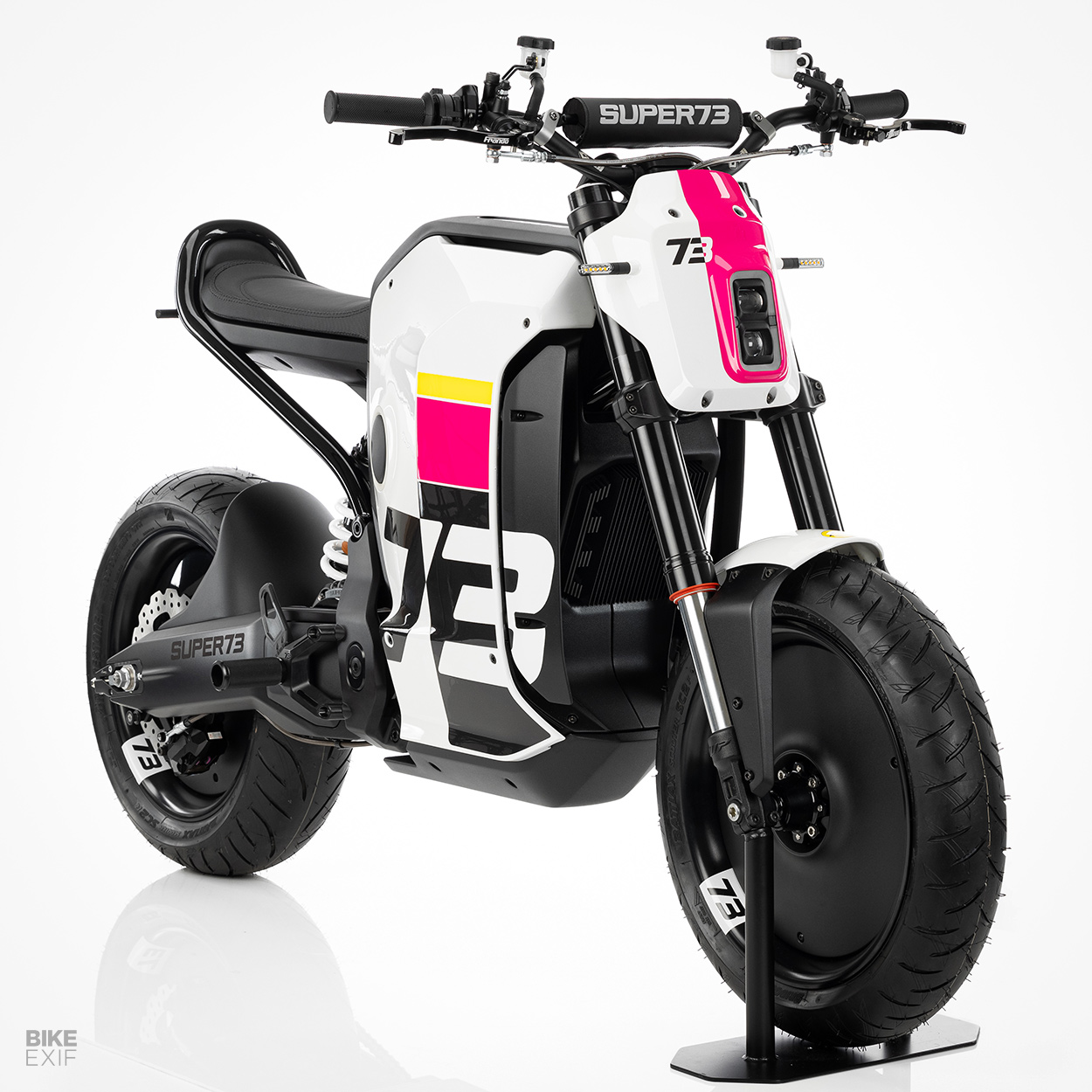 The company also hasn’t quoted any numbers beyond the 75 mph top speed, a 100 mile range and a fast charging system that’ll get the battery to 80% in less than an hour. Those numbers all carry the usual “results may vary” disclaimer, but they do help define who the C1X is aimed for.

This one’s an urban runabout, through and through—small, easy to park and probably a hoot to ride. Between its proportions and the typical twist-and-go convenience of an electric bike, it has all the convenience of a scooter but with far more street cred. 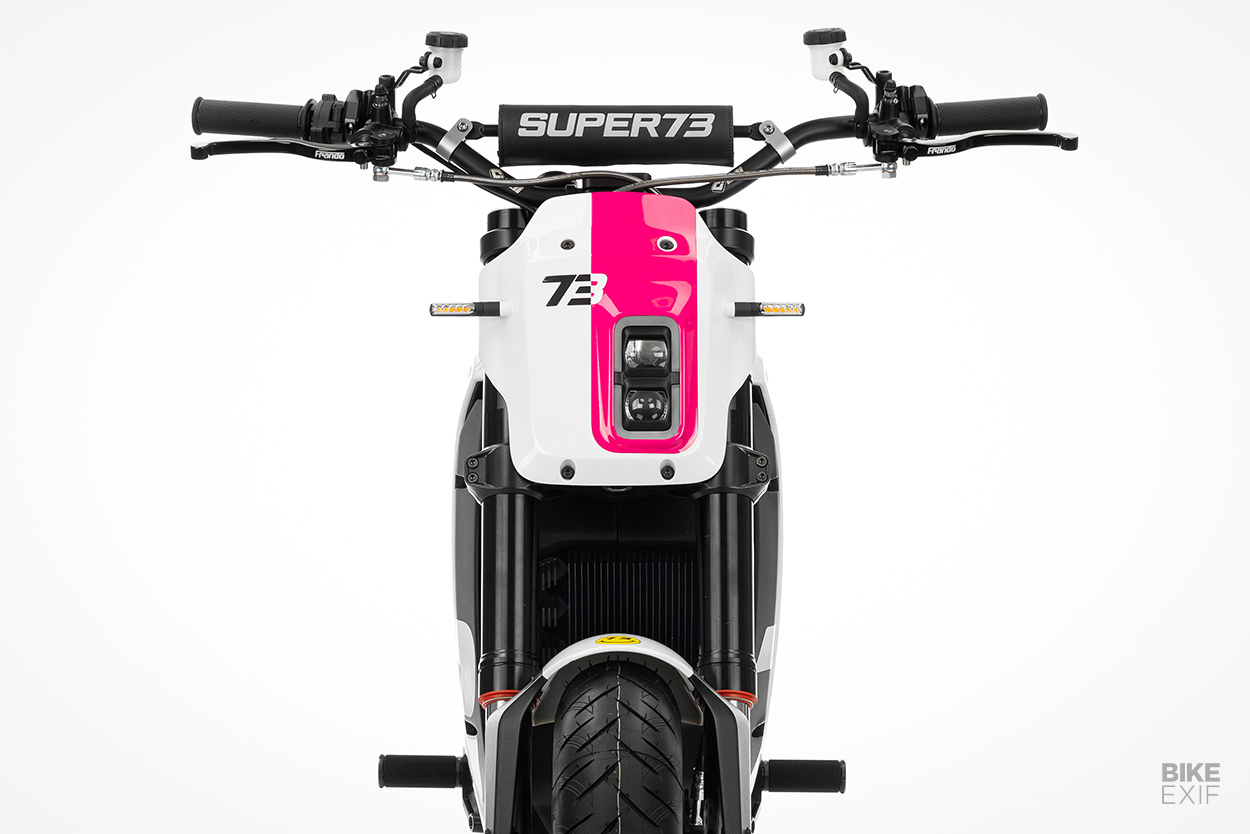 Super73 say that the design process for the C1X started over a year ago, but that it’ll probably be a while still before it’s ready to hit the market (they’re aiming for late 2023).

The C1X is a bold move from Super73, but we can see it paying off—provided that the price is right. There’s no word on that yet, but a refundable $73 deposit secures you a slot—which is far less cheeky than some pre-release deposits we’ve seen. 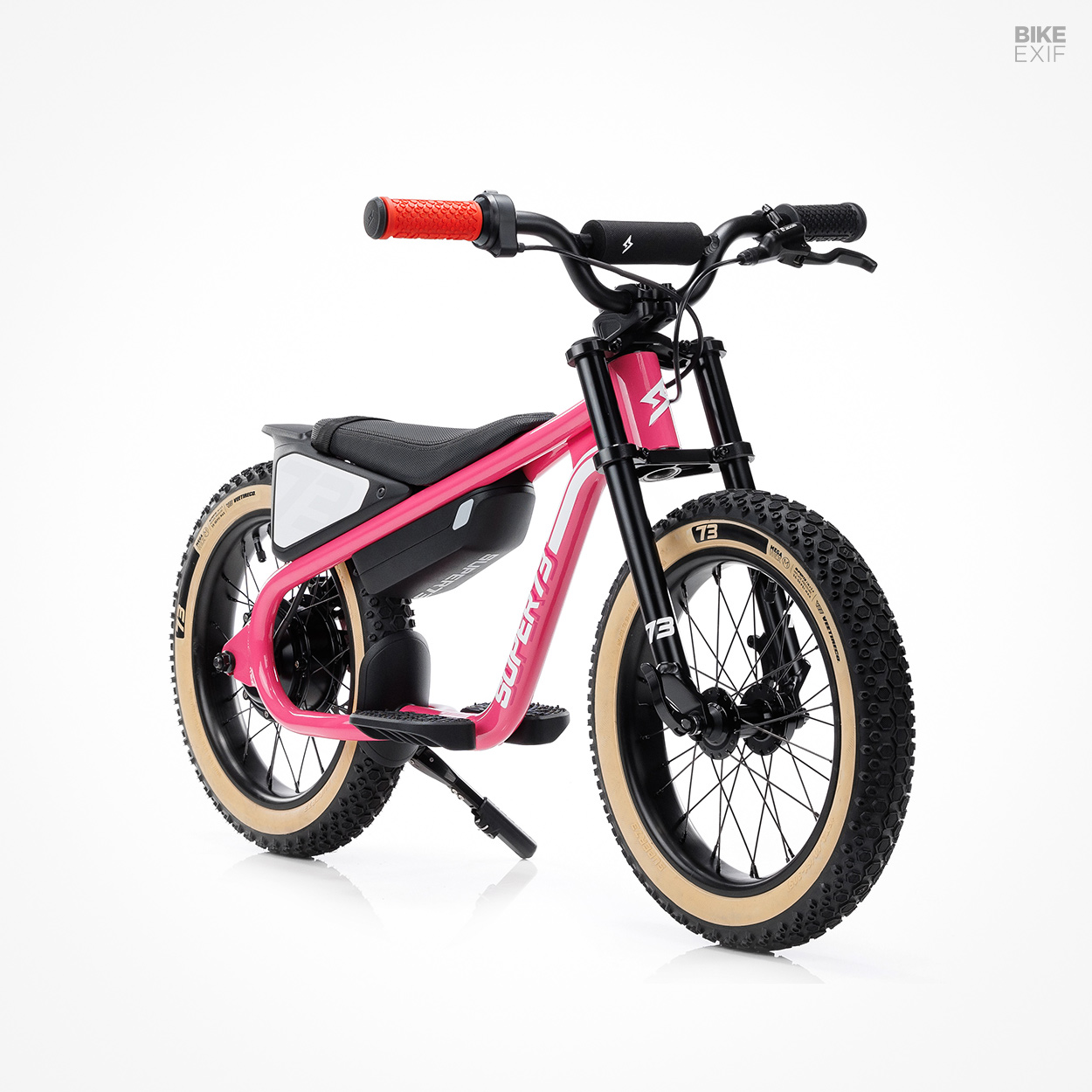 The C1X isn’t the only new model that Super73 pulled the wraps off of this week. Get a load of the new Super73 Youth Series—pint-sized e-bikes aimed specifically at kids. A $100 deposit secures you pre-order pricing of $995, and it’s is set to launch later this year.

The Youth Series is another response to existing customer feedback. Super73 realized that a lot of their riders had young families, and wanted to cut their families in on their hobby. This was highlighted even more during the COVID-19 pandemic, where families were suddenly spending more time together than usual—and had a need to get outside. 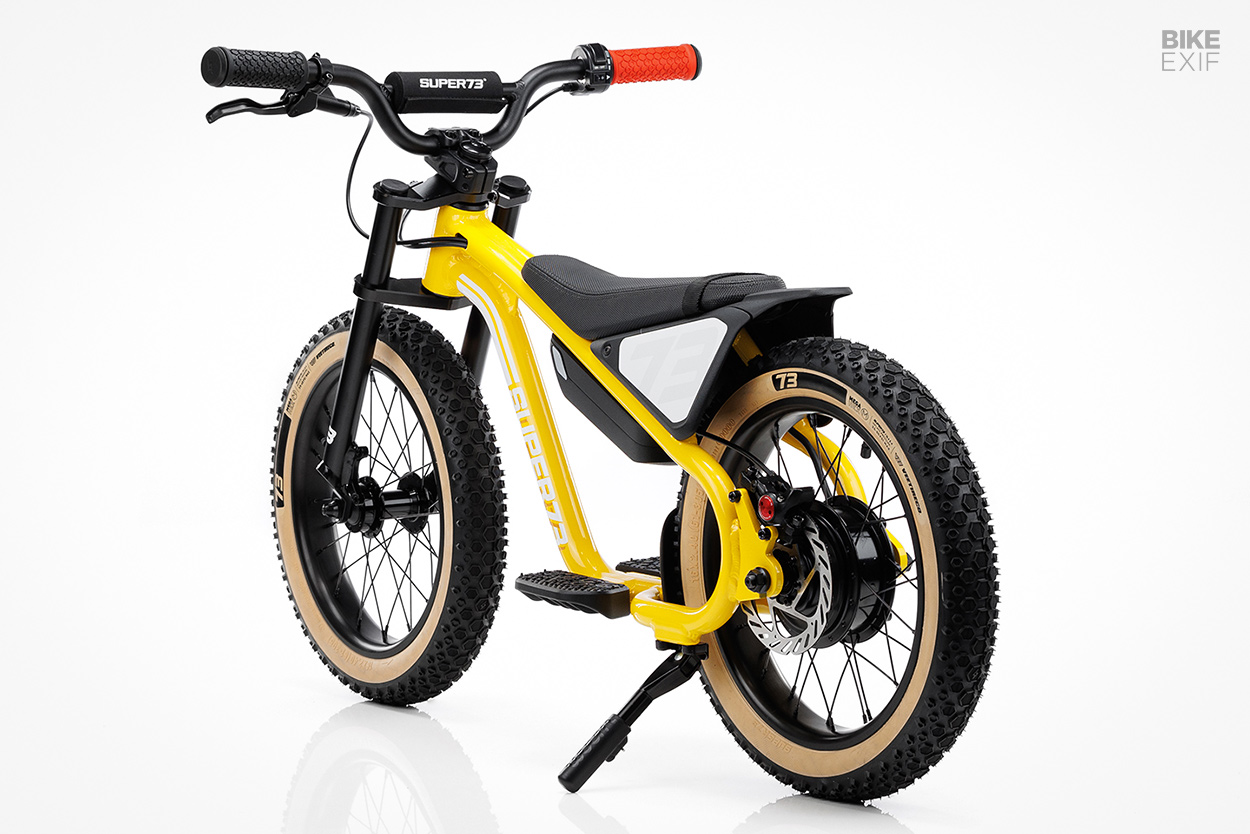 The styling is inspired by Super73’s existing e-bikes, and ramped up with BMX and motocross cues. It looks amazing in all of the four colors it’s offered in, and has us wishing Super73 would release an adult version of it. 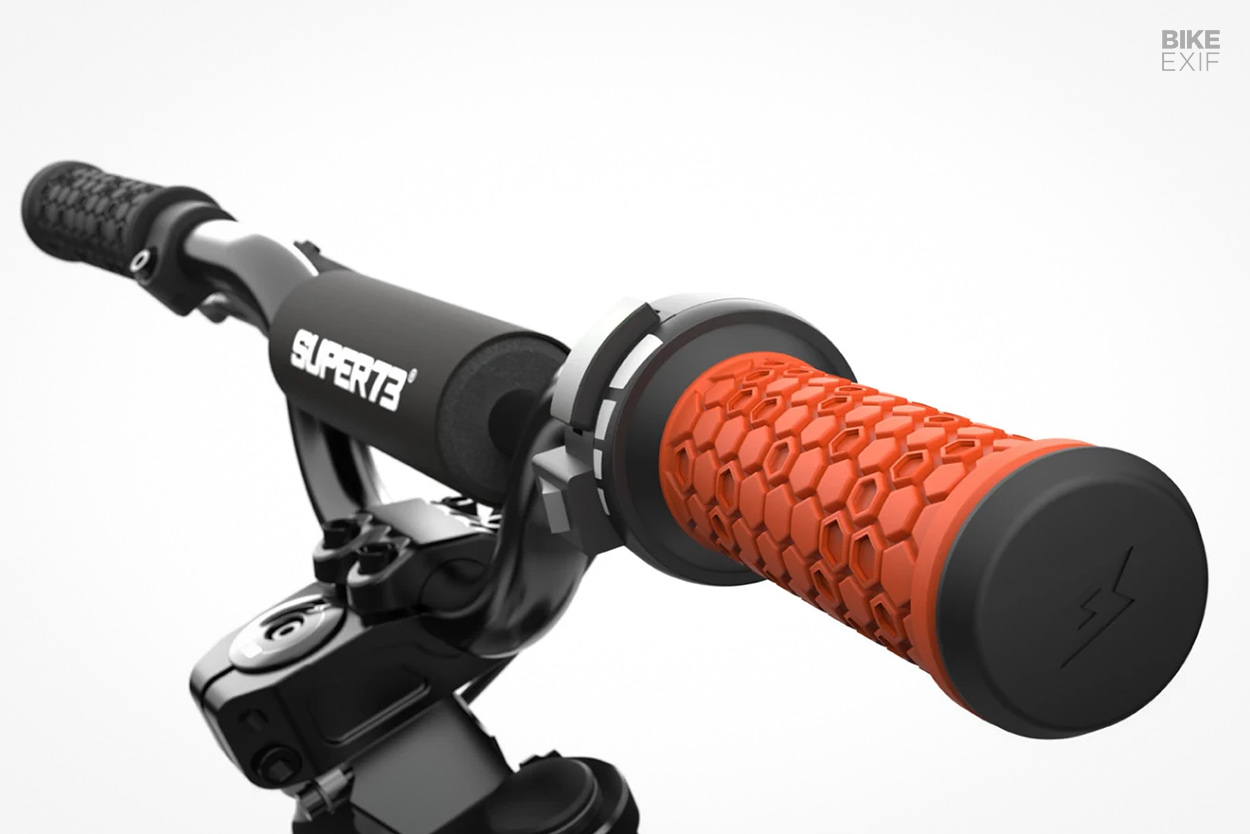 Highlights include a lightweight aluminum frame that can easily be carried (any parent knows that that’ll happen a lot), and a removable battery. We’re also loving the flat track-style seat and two-tone fat tires, and practicalistas will surely smile at the sight of an inner rear fender.

Super73 have cleverly added red grip to the throttle control, to clearly communicate its usage to first-time riders. And the power is adjustable, so that parents can tailor it to their kid. Despite its size and intended audience, Super73 assures that it uses the same level of component spec as their other bikes. 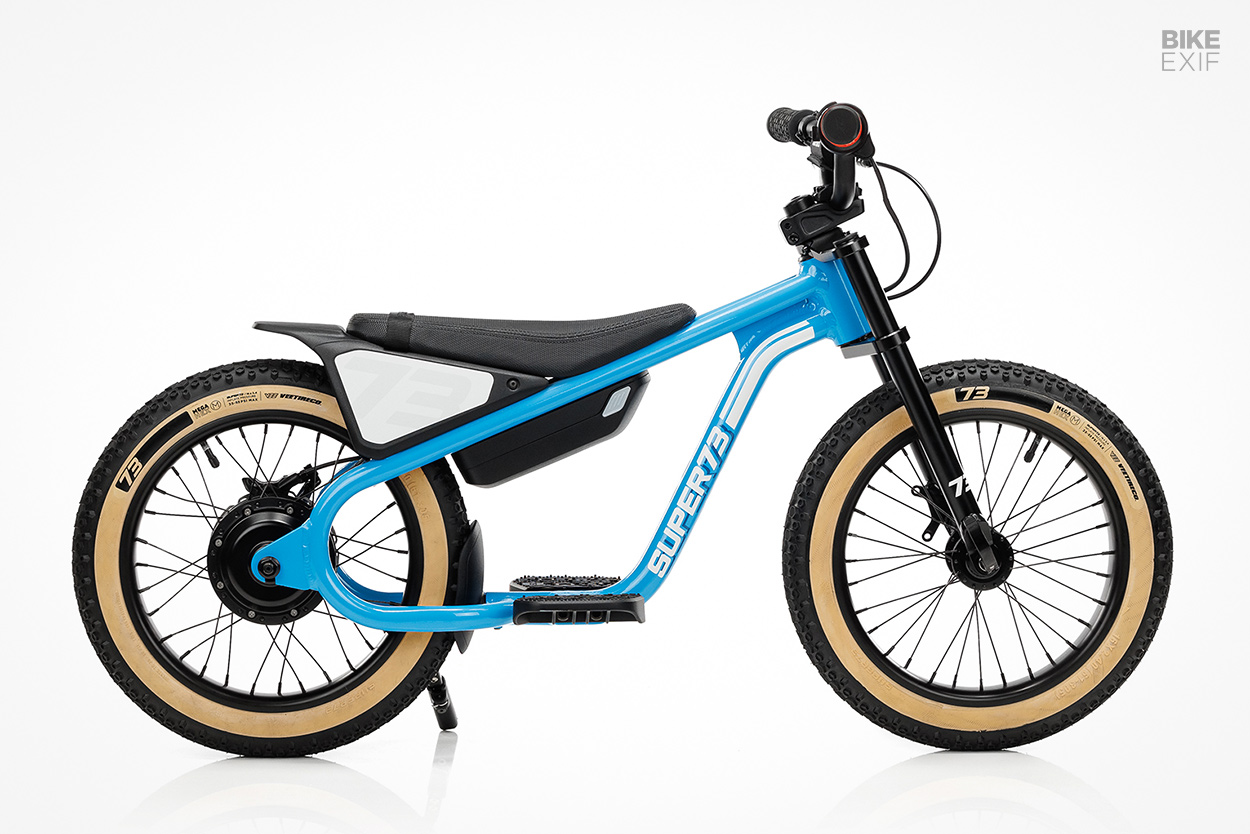 One recurring theme in our recent panel discussion on electric motorcycles, was that the resistance to them is largely driven by petrol-fueled nostalgia. Another was that the growth of the market will be driven by younger riders—riders that are exposed to electric bikes at a young age, and therefore won’t have the same mental block. And Super73 clearly understand this.

Both the C1X and Youth Series are not only on point visually, but fill two very specific niches in the greater motorcycle market. We’re excited to see how this plays out—and we’re itching for a ride. 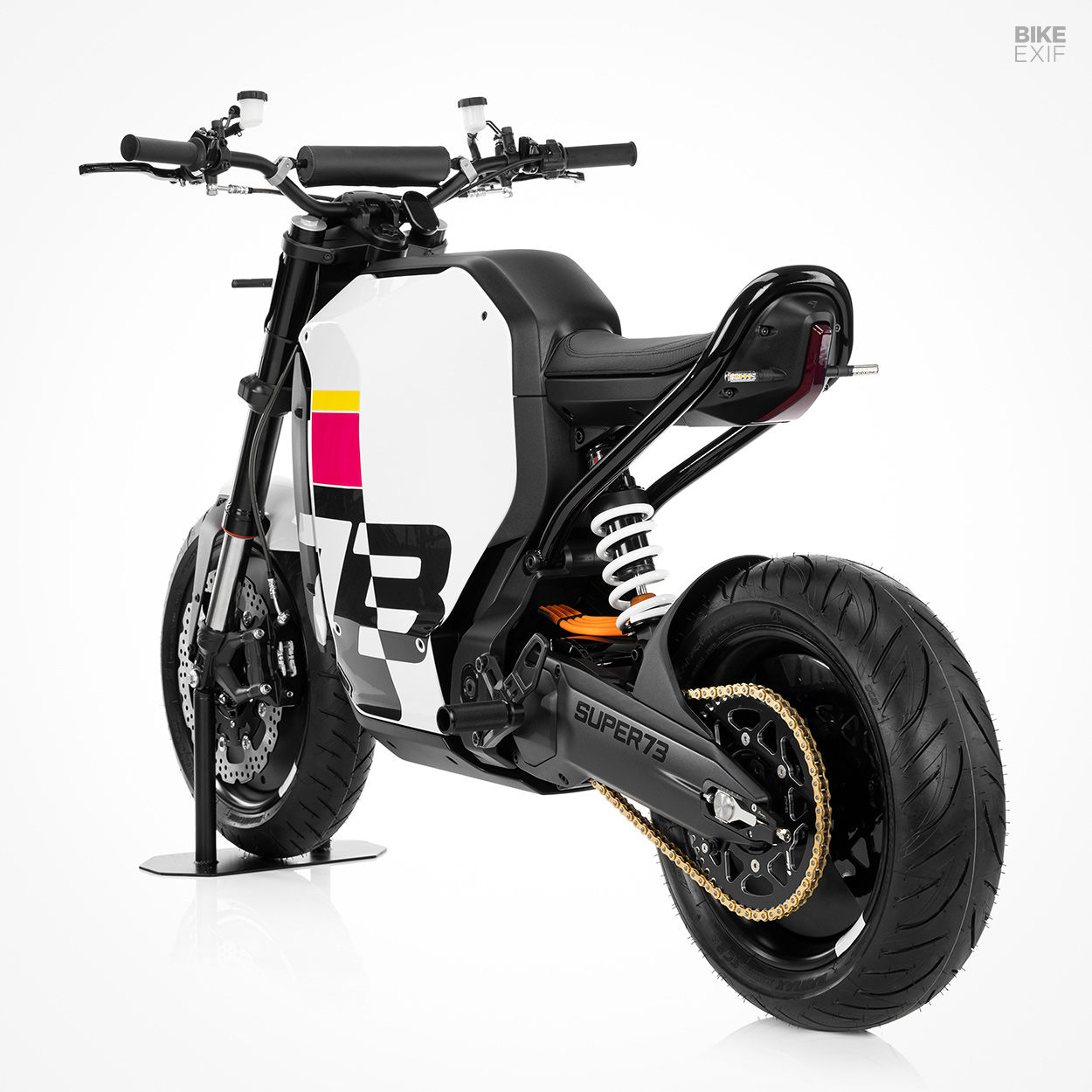