No money, no problem: A turbo’d Suzuki GS650 bobber 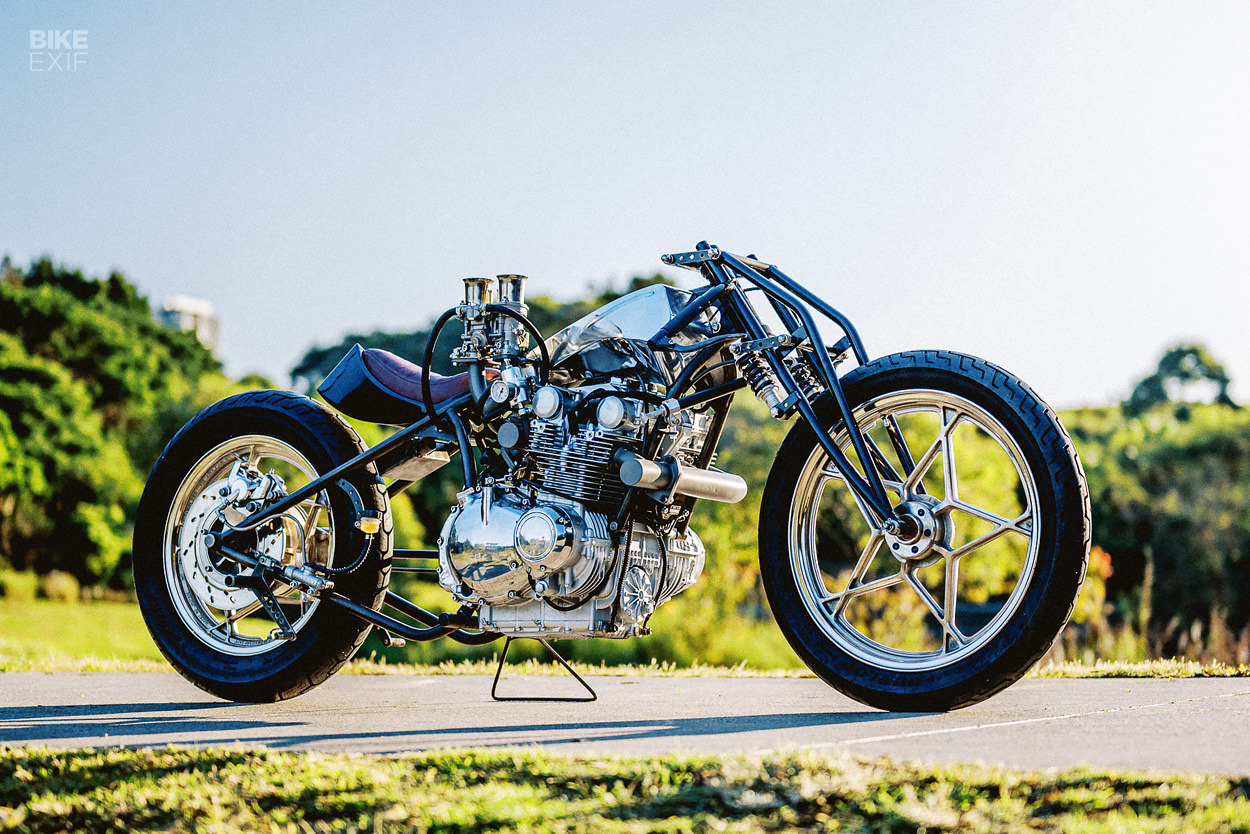 Building a decent custom motorcycle on a slim budget is a tall order. But you know what’s even harder? Doing it with no budget at all—unless your name is Edi Buffon.

Operating as Machine 1867 out of Sydney, Edi’s known for his wildly imaginative machines. This Suzuki GS650 bobber is a typical Machine 1867 build; completely radical, and laden with complex solutions to non-existent problems. And yes, he really did build it without spending a dime (well, almost). 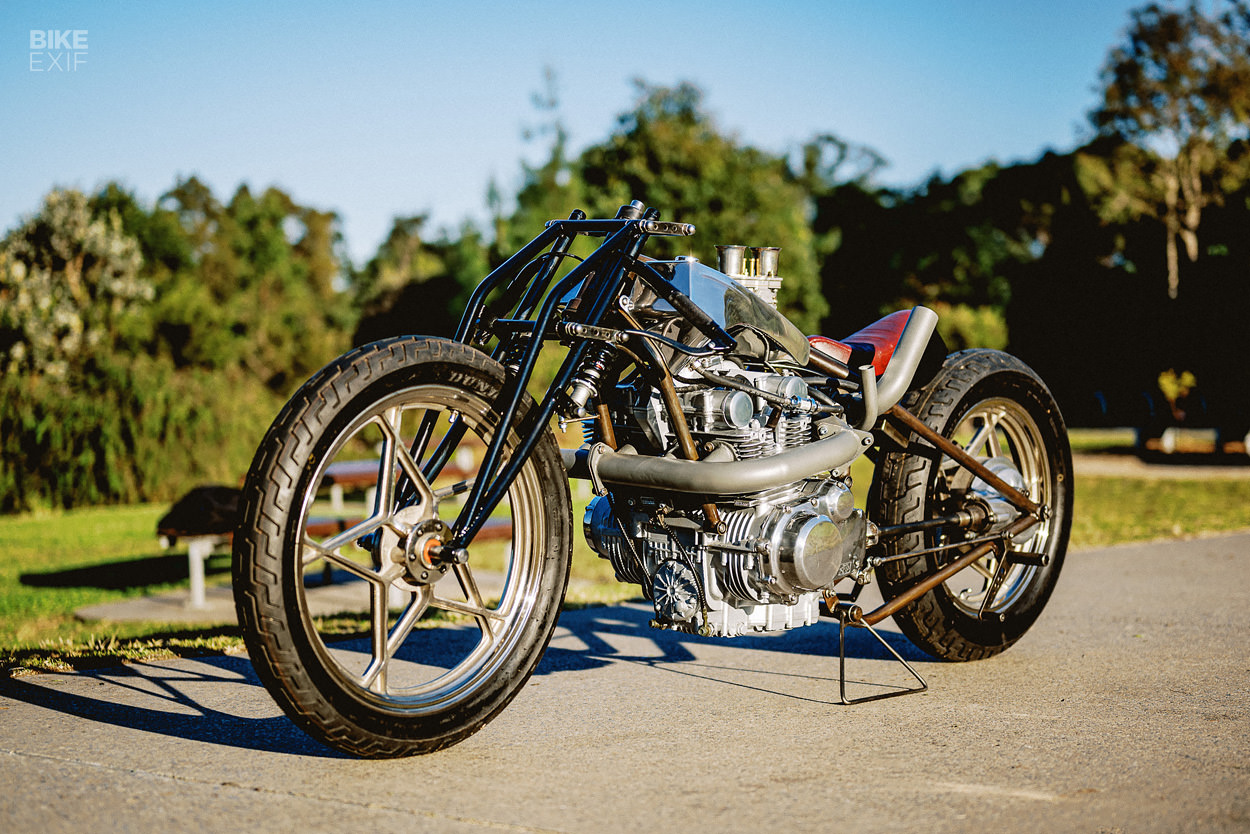 “While contemplating my next build and becoming increasingly busy as my business progressed,” says Edi, “I remembered that I had a Suzuki GS650 in storage. It was a bike I had tinkered with several years earlier, but lost interest in as other projects took priority.”

“I removed the engine and set it up on my fabrication table along with the wheels, and took a step back to contemplate my next move. I decided to set the goal of a zero budget build, by just using what I had on the shelves and making everything else.” 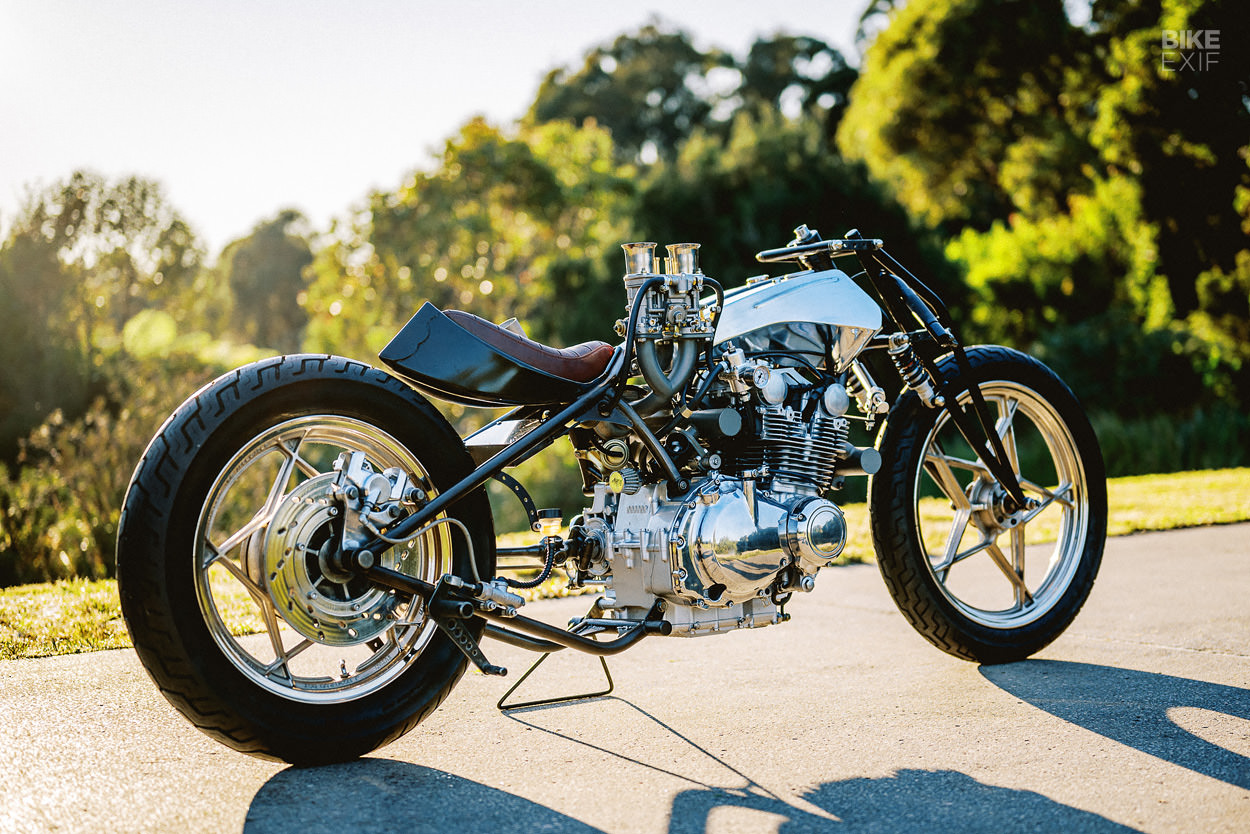 Edi’s first job was to choose between super- or turbo-charging the Suzuki. He settled on a turbo, and then began conceptualizing his build in real time, as is his way.

“I started bending some tubes,” he explains. “This was going to be a rigid frame with the engine as a stressed member. I set the rake at 35 degrees and the wheelbase at 1,550 mm—numbers I’ve used before.” 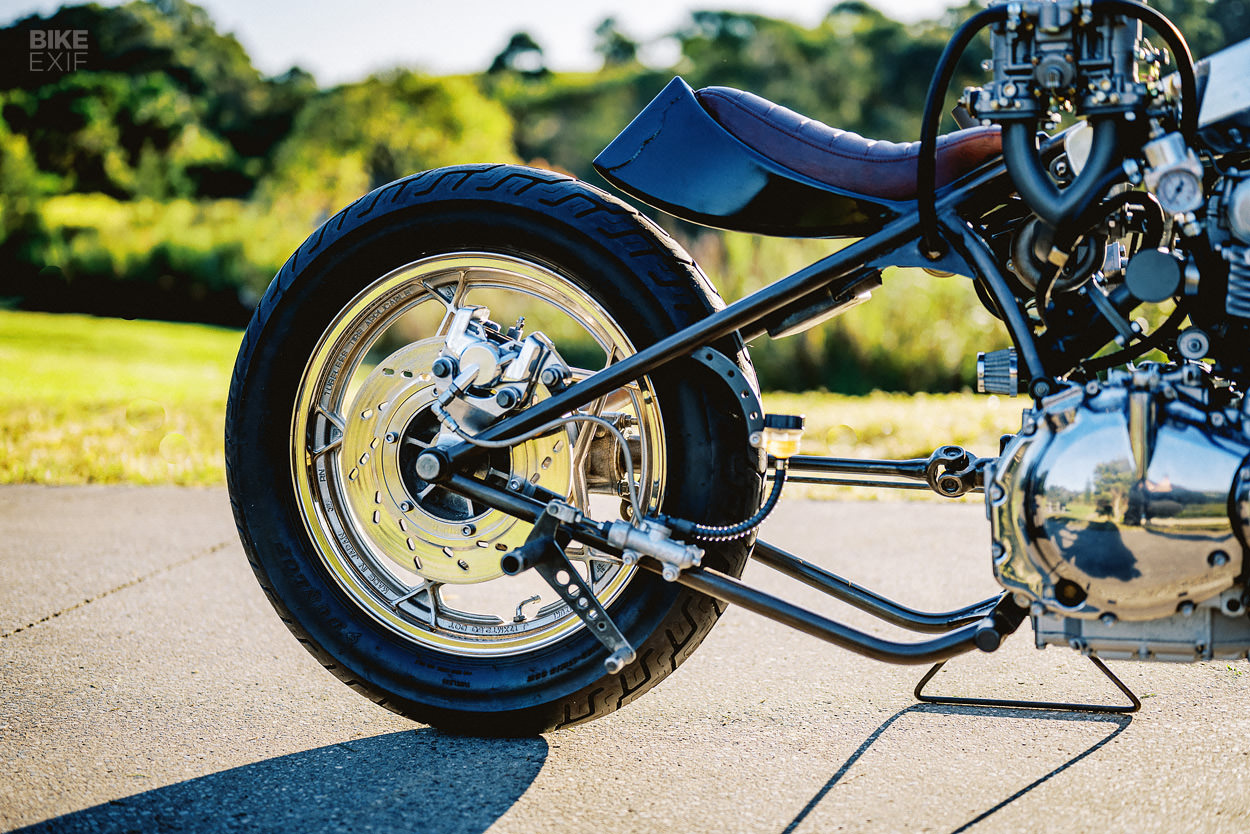 “As I progressed, the bike revealed itself: my version of a drag bike. I opted for a twin tank setup, as I have done previously, as it is an effective way to hide electrical components.”

“Now that I had a direction, I set about building this thing.” 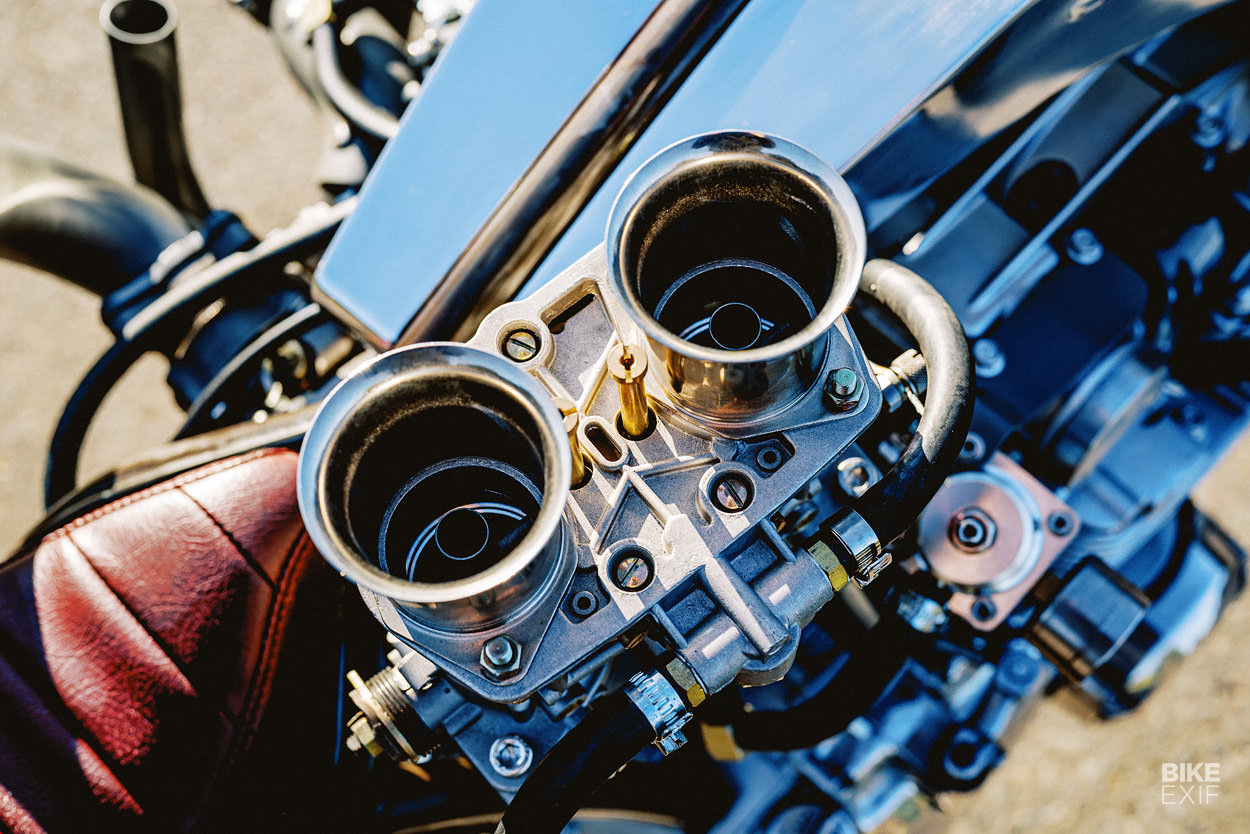 Edi finished the frame first, then turned his attention to the exhaust and turbo setup. On the right-hand side of the bike is a repurposed Webber carb, sitting atop a handmade manifold. Most of the suck-through turbo system is custom—from the plenum, to the blow off valve and even the nipples for the boost gauge and pressure regulator.

“Real estate was quickly disappearing,” says Edi, “but I managed to mount the external fuel pump under the seat, as well as the tiny battery, which only supplies 12V power to the fuel pump. The bike requires a roller starter as it is a total loss system.” 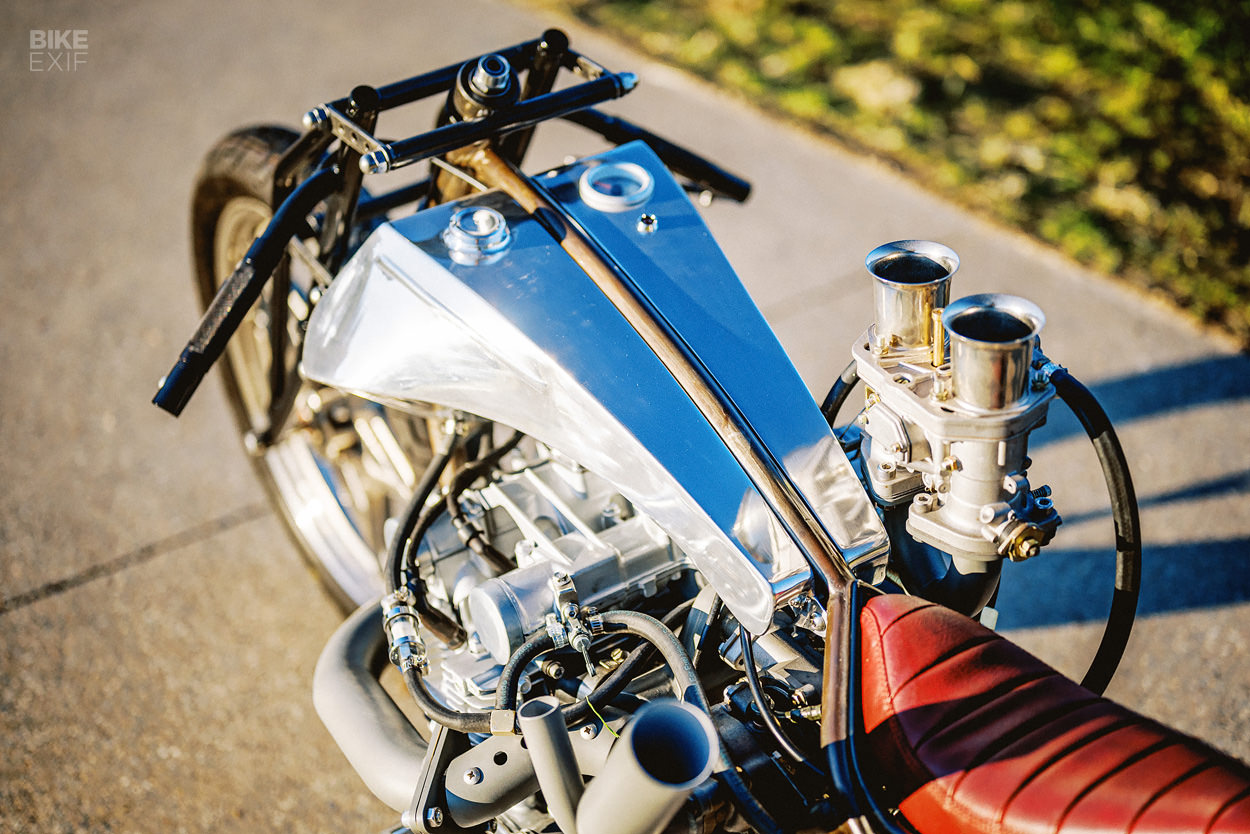 The exhaust system was put together from pieces of the original headers, and pieces of 3” pipe from a box of offcuts. When Edi ran out of 3” pipe, he used some 2.5” sections he had—repurposing a flange from a four-cylinder system to match the different diameters together.

“I aimed the dump pipe and exhaust upwards,” says Edi, “because it looks menacing and impractical—and I had no other option. Now when I squeeze myself into the riding position, I have an exhaust burning and deafening me on my left, induction noise on my right, and stuff poking my ribcage.” 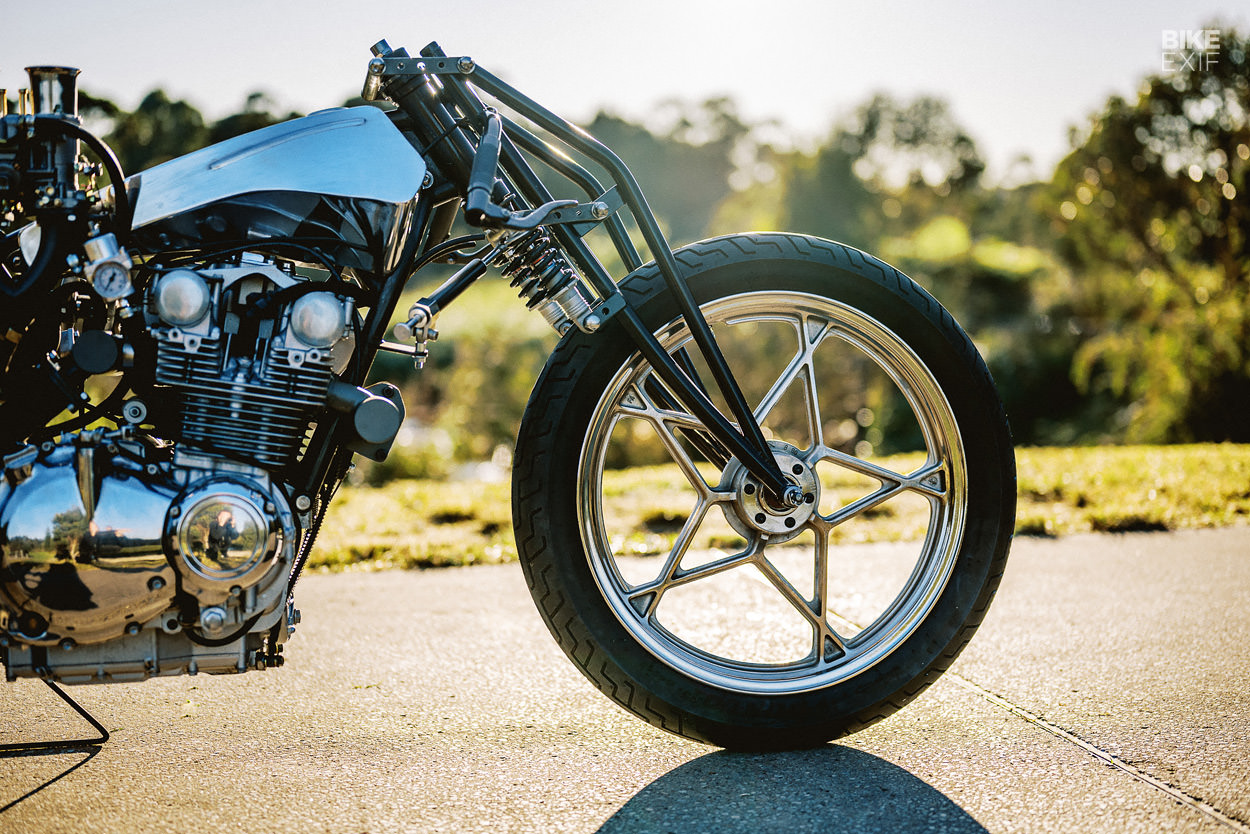 By this point any semblance of practicality had gone out the window. So Edi decided to go all-out with the front end too, fabricating his own take on the Druid girder-style forks made by A. Drew and Co. in the early 1900s. The design is remarkably elegant, and uses a pair of mountain bike shocks that Edi had lying around.

Its svelte appearance belies just how much work went into it, though. “There were quite a few parts and engineering challenges to work out,” Edi explains. “However, this is now my favorite front end setup and I’m sure I will use again it in the future.” 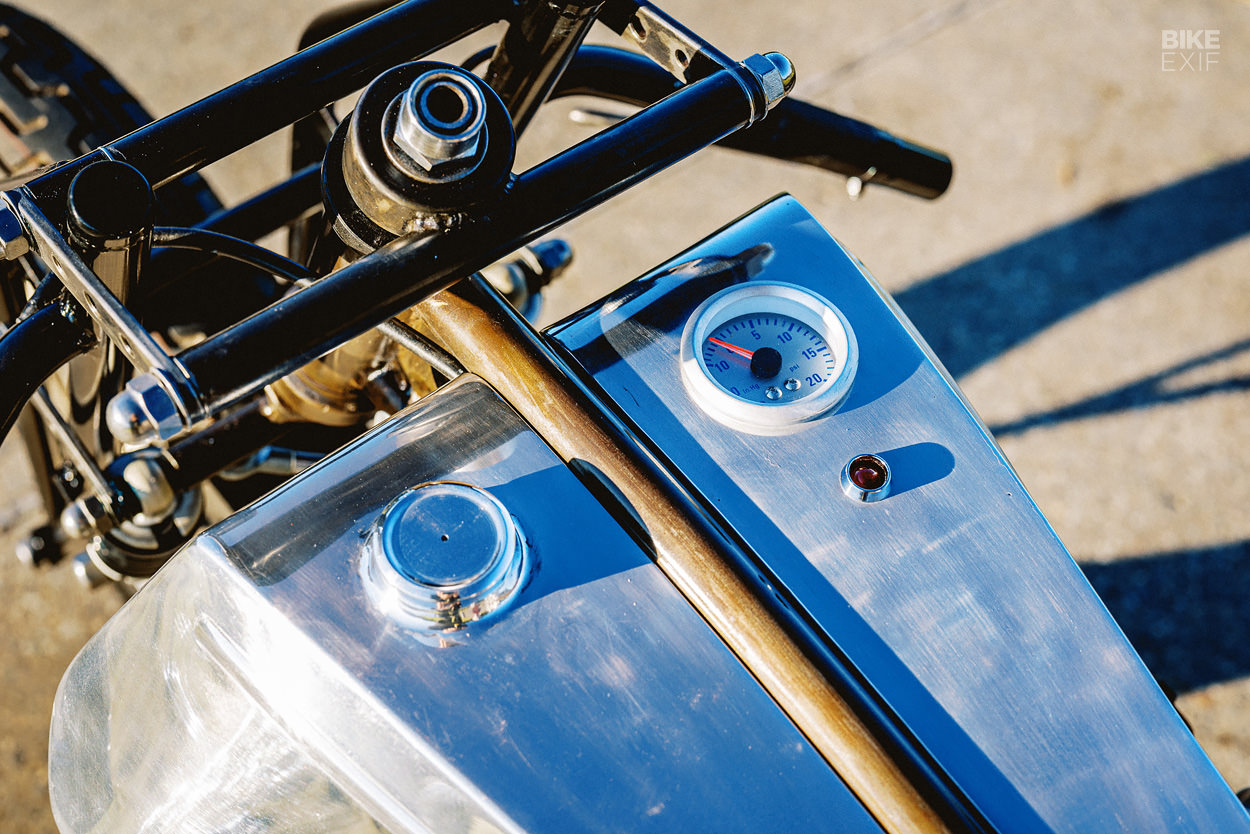 Next, Edi welded a set of handlebars to the forks, then fabricated a set of knurled grips, along with inverted levers for the clutch and throttle. You read that right: this bike uses a lever-actuated throttle. The rear-sets were pieces together from a number of scalped parts.

Edi’s last major fabrication job was the GS650’s new split tanks. “I had no design in mind,” he says, “just a simple shape to follow the top backbone. I like that you can see the reflection of the engine in the bottom panel.” 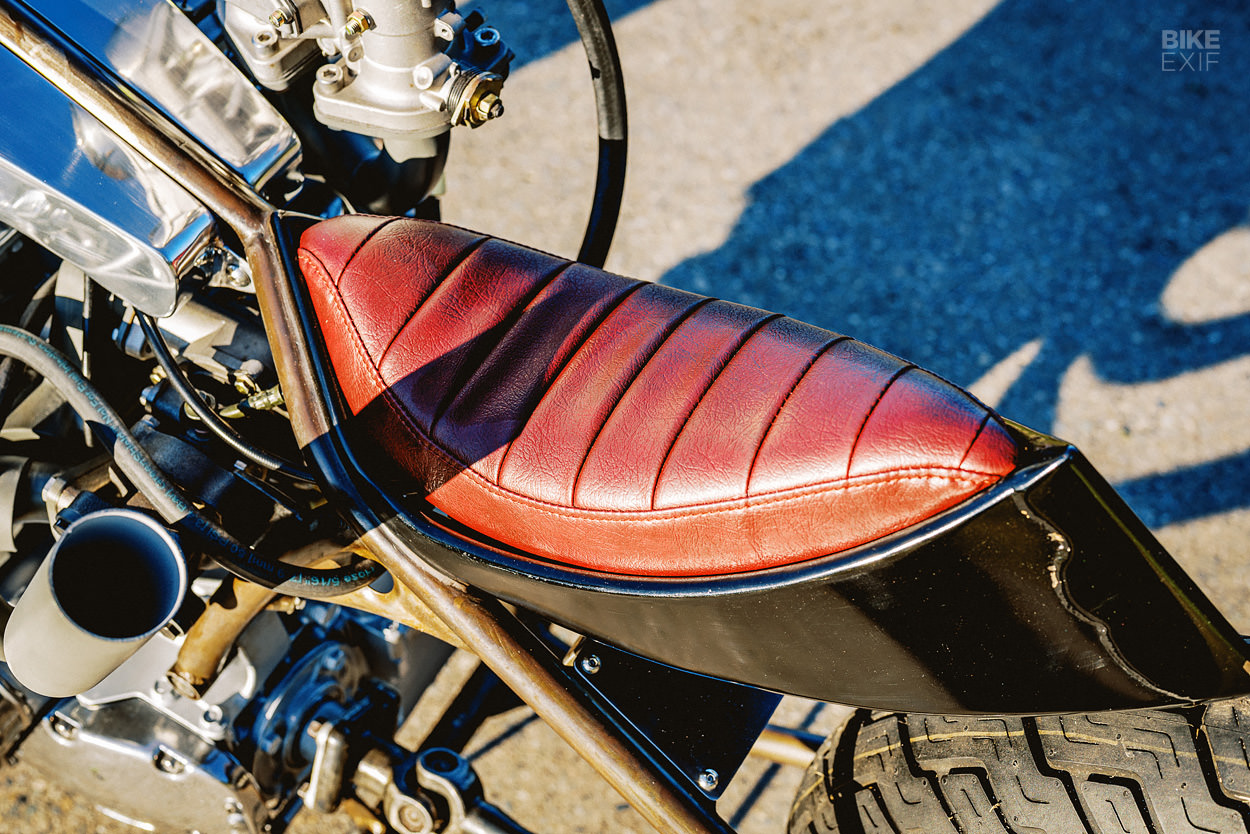 Edi polished up the twin tanks, painted the custom tail section and forks black, then experimented with a chemical bluing process on the frame and various fittings. When it came to the final assembly and plumbing, he chose to put all of the fuel and vacuum lines on display, to add to the bike’s mechanical aesthetic.

He did eventually have to crack open his wallet though, to pay for upholstery and some ceramic coating work. “Money well spent,” he admits. 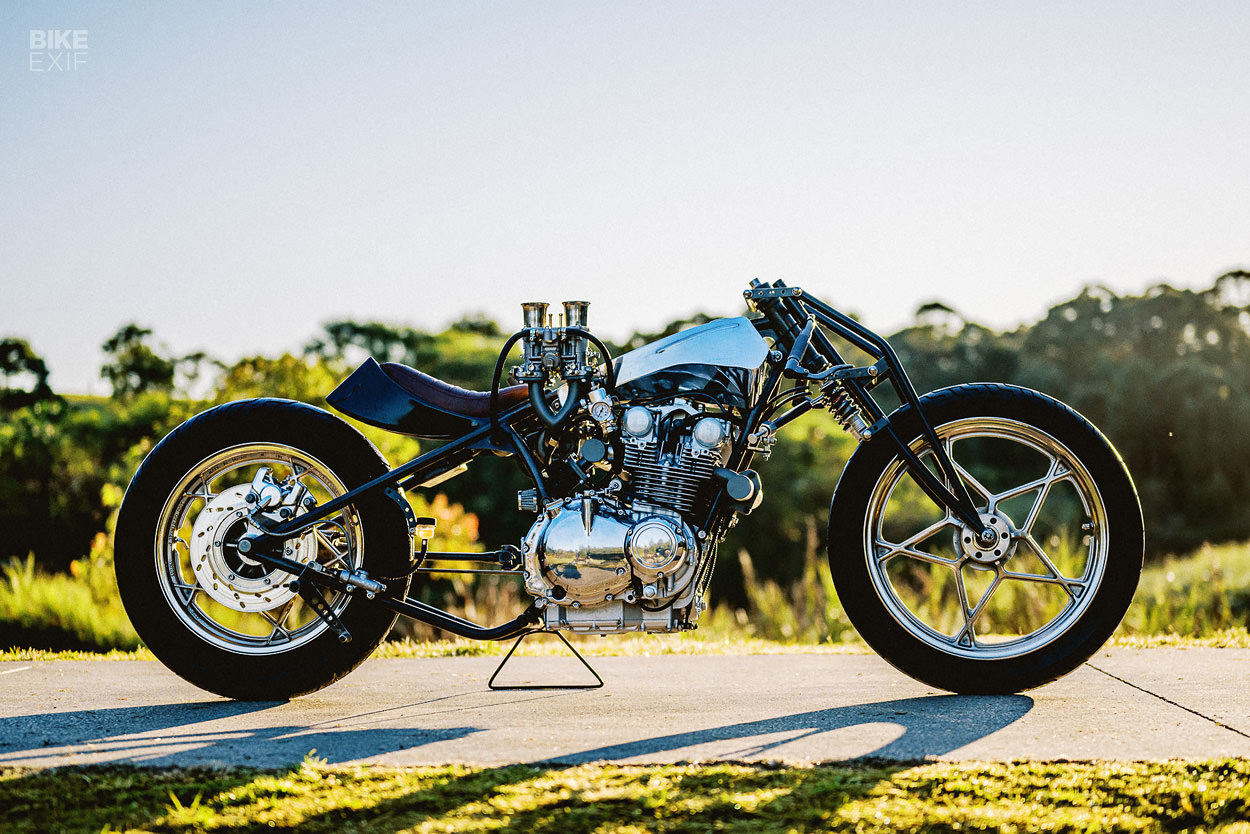 Most of us wouldn’t be able to conceive a build this outrageous—let alone create it with nothing but talent and a few leftover parts. Edi is nothing short of a true custom motorcycle wizard. 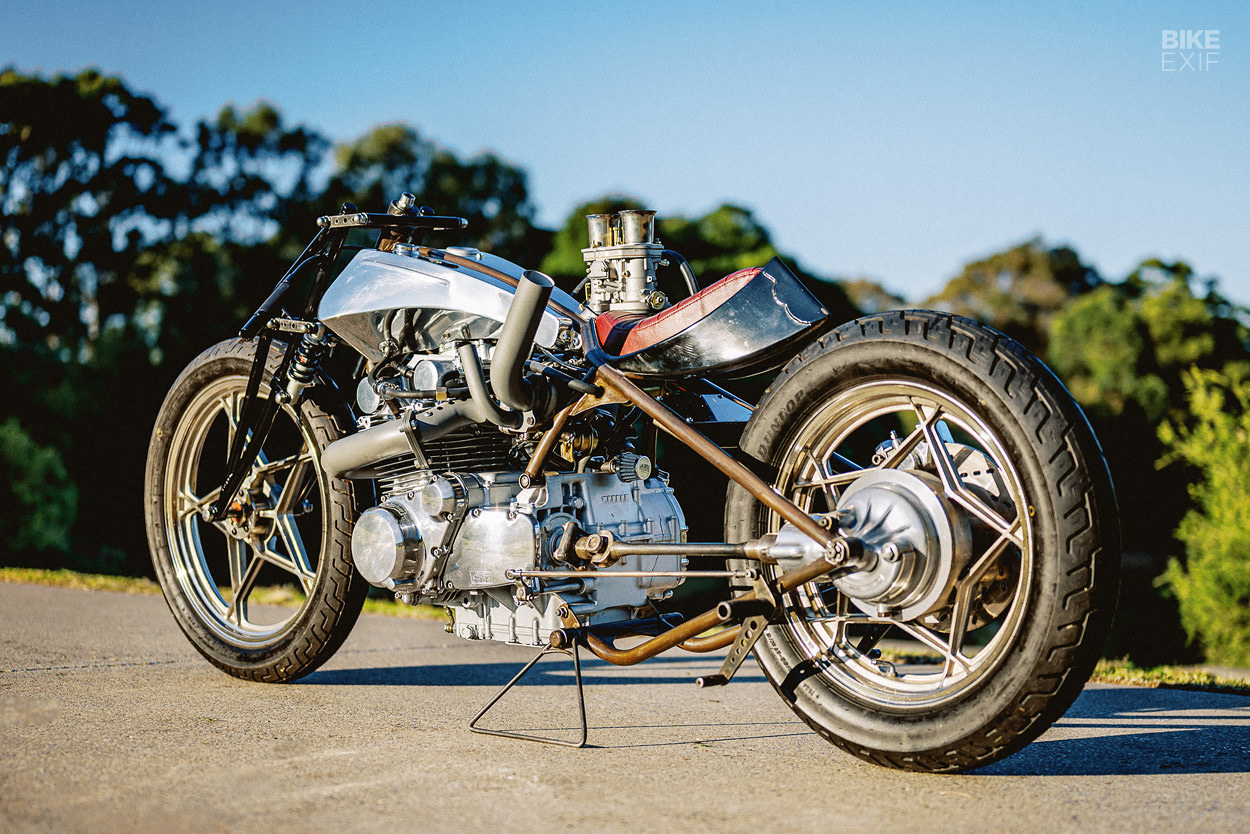