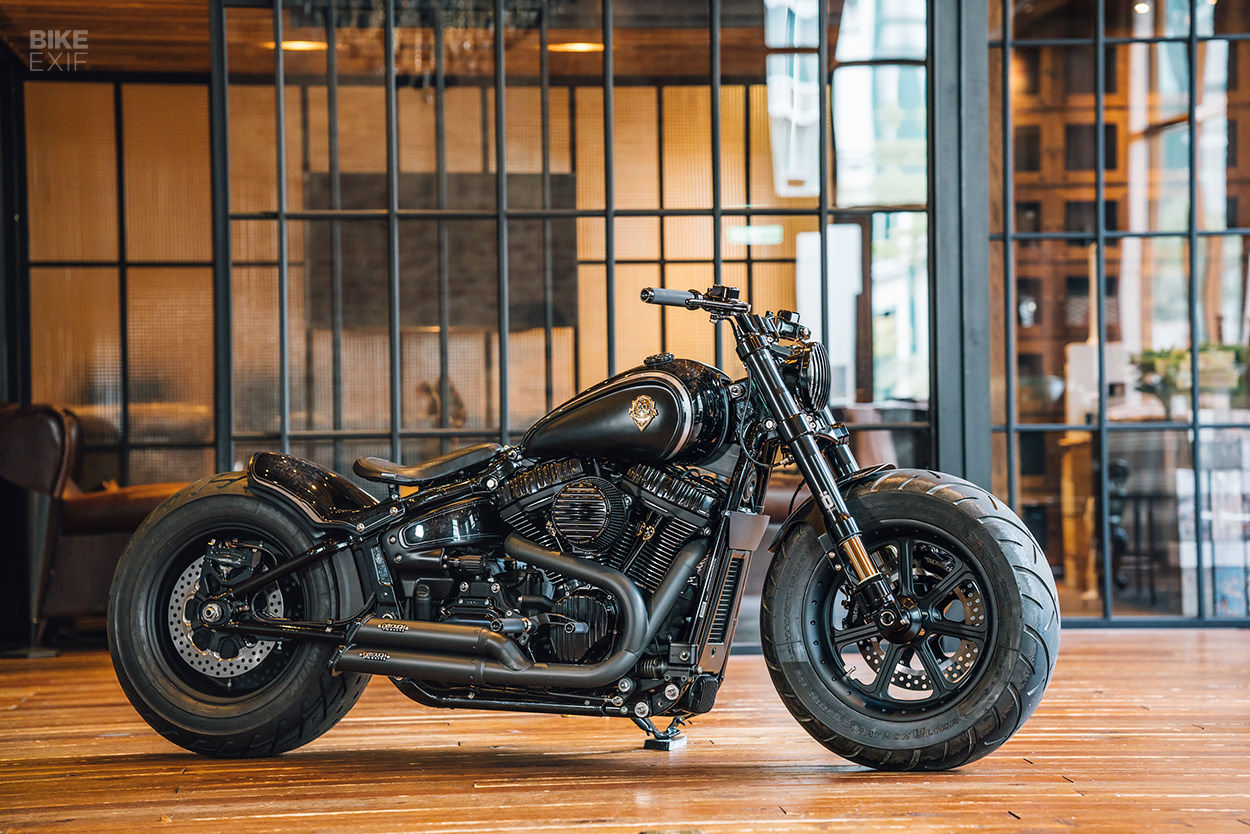 We often laud Winston Yeh for his ability to apply his signature Rough Crafts style to just about any type of motorcycle. And he’s just flexed that muscle again, by simultaneously building two very different bikes for a pair of friends.

The first commission was for this 2020-model Harley-Davidson Softail Fat Boy, and the second order came the very next day. “The Harley guy came first and placed the order,” Winston tells us. “That same night he had dinner with his friend and told him about it. The friend got excited and came in the next day, saying he wanted something cool too.” 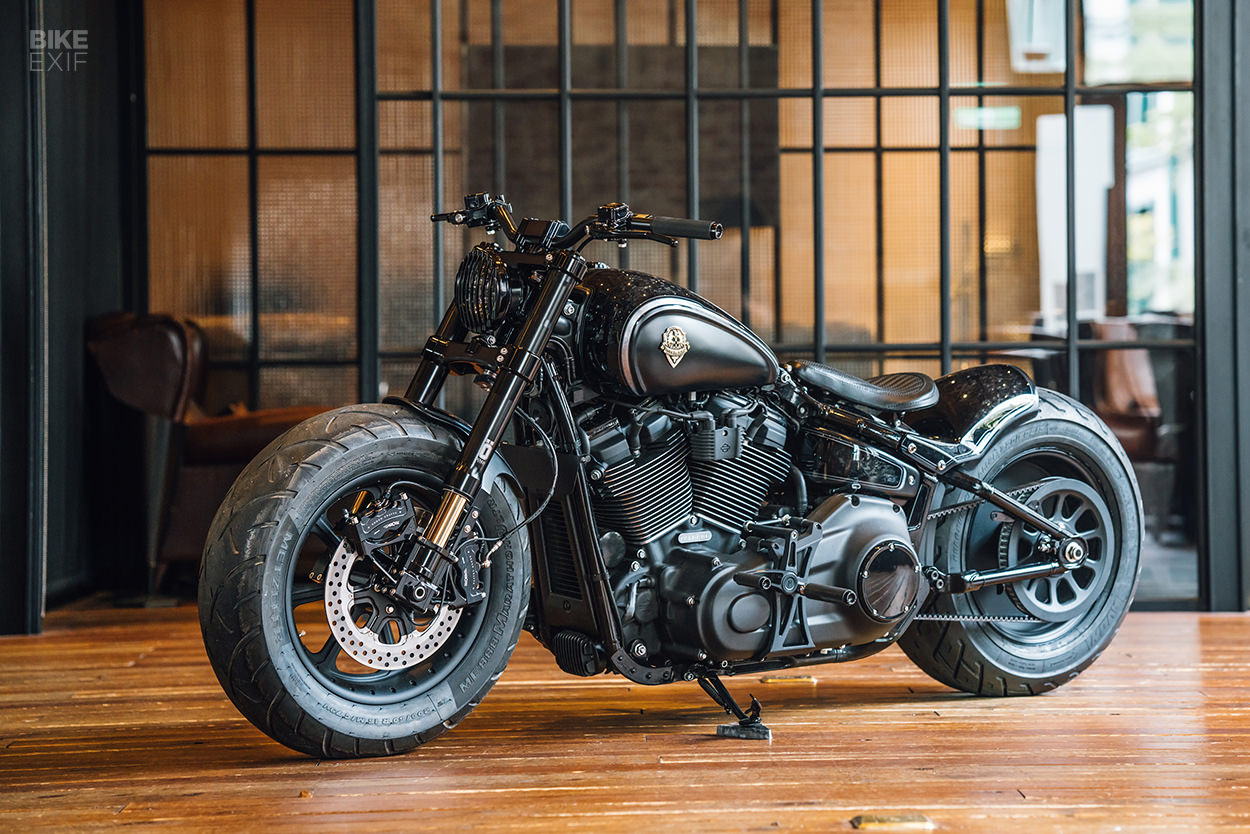 Both projects wrapped up around the same time, but since the Harley was the first in, Winston’s chosen to unveil it first. It’s a stunner too; Winston cut his teeth on Harleys, and this one’s a mash up of some of his best ideas.

“Fat tire Harleys that mix retro lines with modern finishes are always something that people love from us,” he tells us. “As we showed the customer some of our previous builds, like the more retro-themed ‘Crowned Stallion,’ and some of the more modern ones with billet wheels and top-spec brakes and suspension, the conversation quickly turned to ‘how cool would it be if we combined these polarized styles?’” 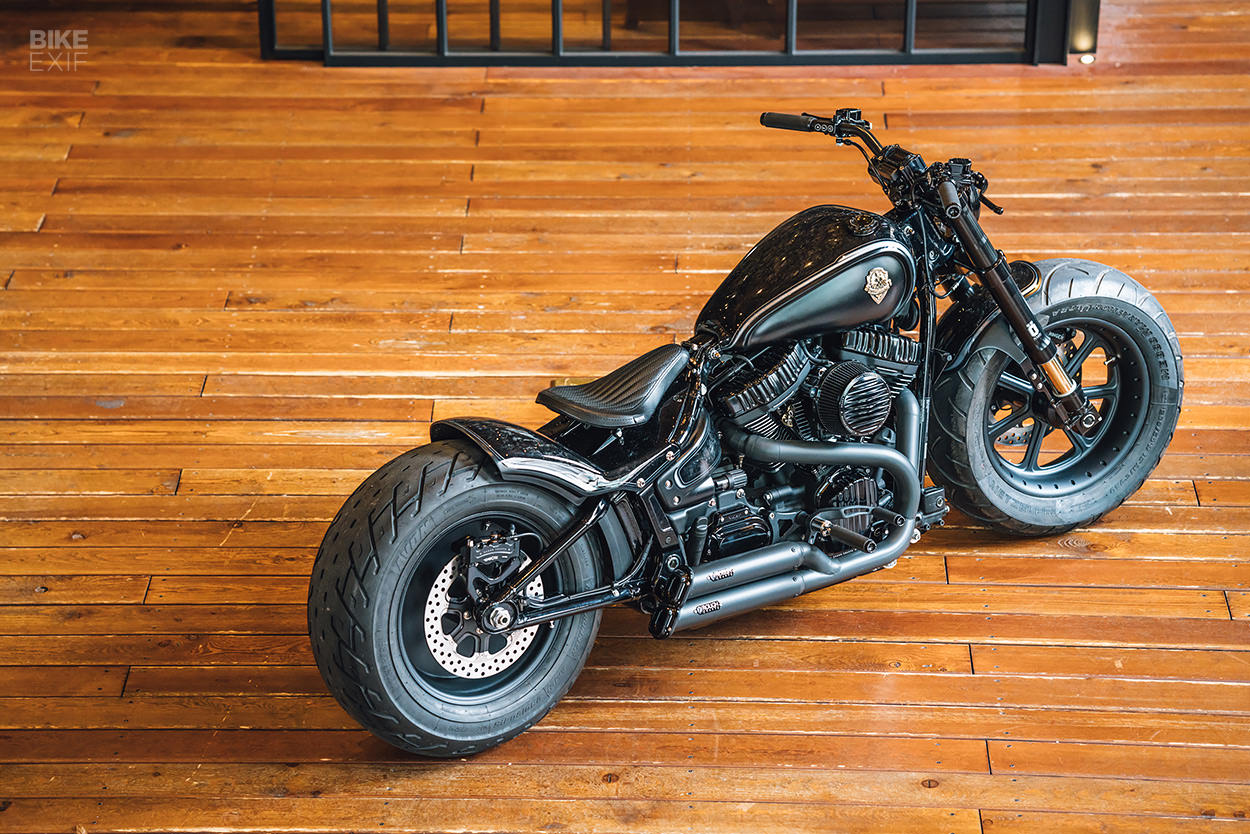 The first step was to fine tune the Fat Boy’s stance with a new set of wheels. Winston picked a 5.00×16” Roland Sands Design wheel for the front, with a solid 7.00×15” HD Wheels number at the back. They’re wrapped in Metzeler ME888 and Avon AM21 rubber, respectively.

The brief called for upgraded suspension, so Winston reverted to his go-to brand: Öhlins. There’s a set of chunky FRGT301 forks up front, split wider by a set of custom-machined yokes. An Öhlins HD503 shock takes care of the back end. 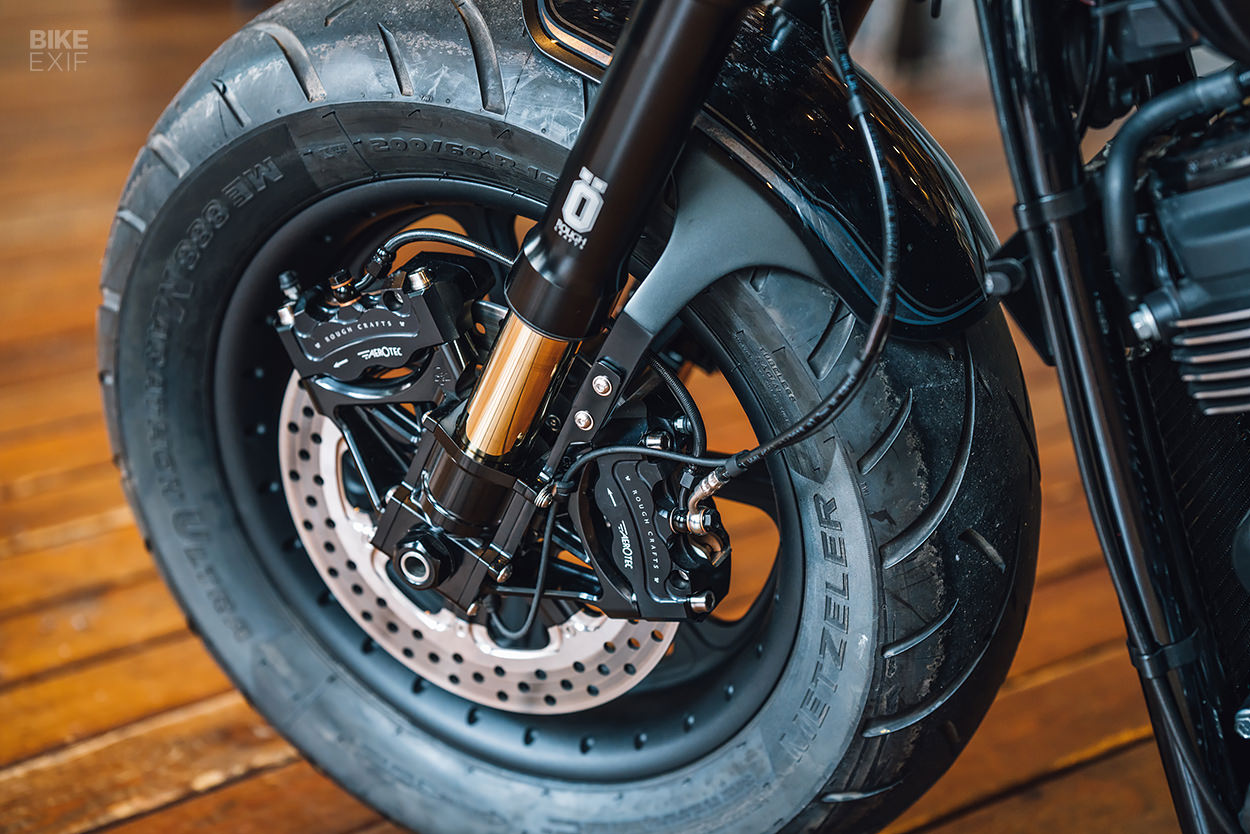 There’s some trickery going on with the brakes too. Opting for the classic look of a single-sided front brake, the Rough Crafts team designed a special mounting system to hold two calipers on the left side. The actual braking system uses Beringer calipers and Roland Sands rotors.

The bodywork is dead simple, but inspired. The fuel tank looks custom, but it’s actually the original unit, trimmed down. There’s a modified Kodlin fender at the back that includes an integrated cover for the electronics that normally hide under the seat. 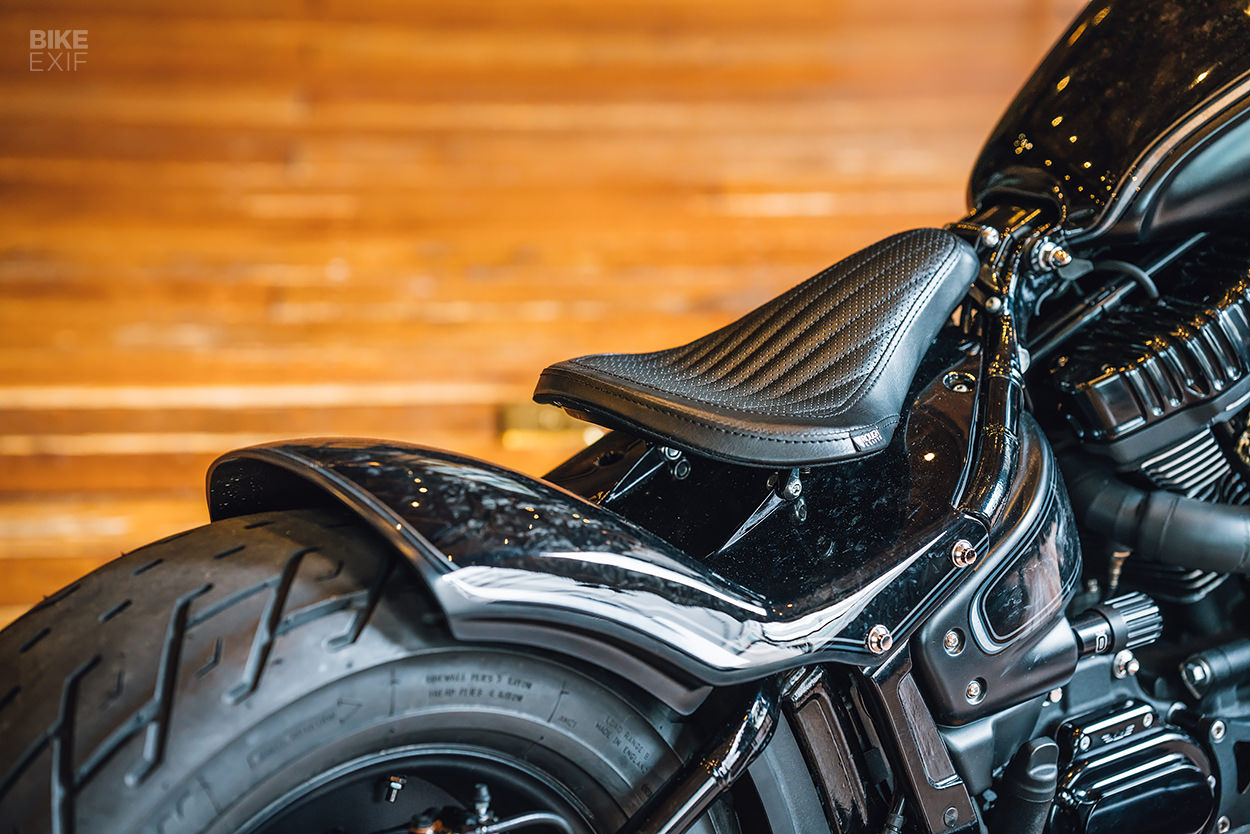 The saddle was one part that Winston wanted to make decidedly vintage—so he had his upholsterer re-cover a bobber-style solo seat from Biltwell Inc.

Tweaking the OEM tank also meant losing the instrument cluster that usually sits on top of it. Replacing it is the stock digital speedo from a Street Bob, mounted dead center on the bars. The riser clamp that it’s housed in was plucked straight from Rough Crafts’ online shop. 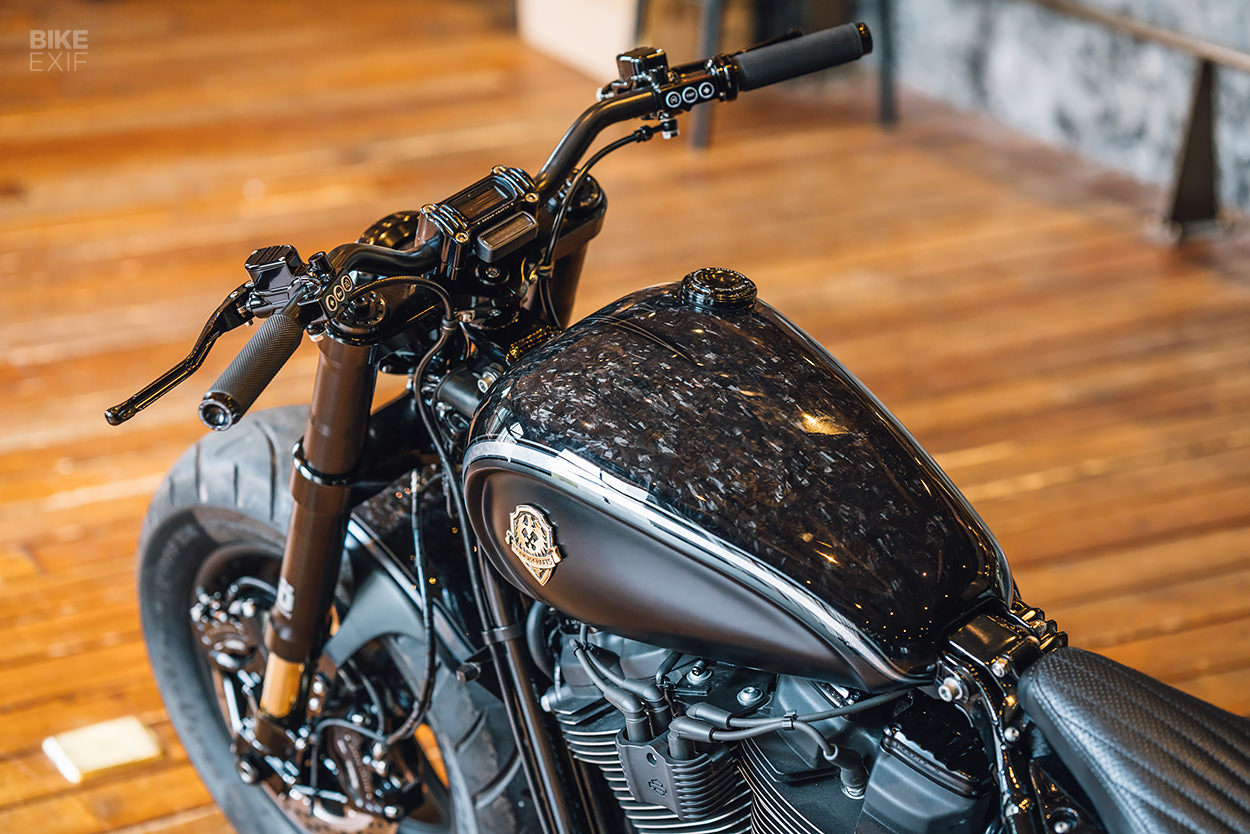 The rest of the build is sprinkled with the usual Rough Crafts fare. 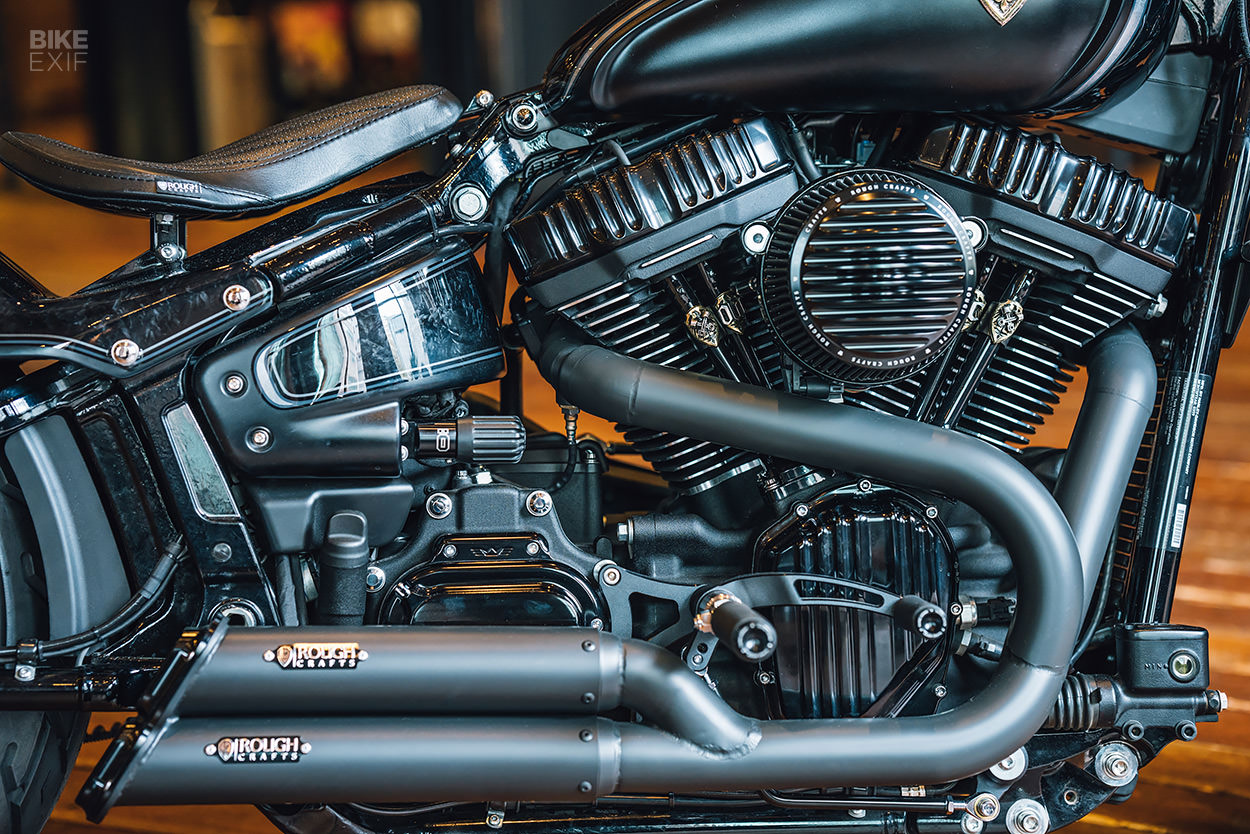 The mid-mounted foot controls are a Performance Machine system, but the actual footpegs, along with the engine’s cam and valve covers, are Rough Crafts x Arlen Ness parts. There’s a Rebuffini hydraulic clutch slave cylinder in play too, while the air cleaner and gas cap are both in-house parts.

Winston added one more modern touch with the Harley’s custom exhaust. “We designed a two-into-one-into-two system that’s drag-bike influenced,” he explains, “but still blends into the clean retro look from a distance.” 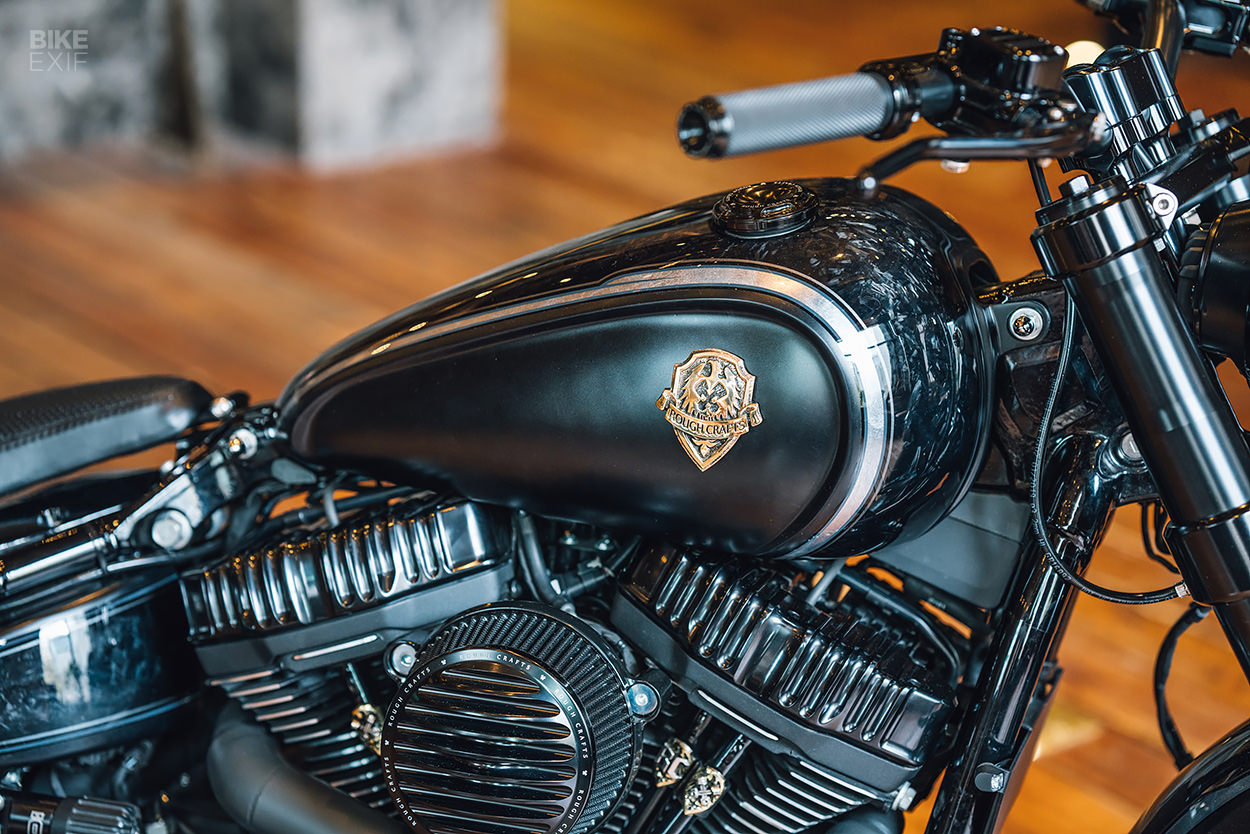 The final finishes on this build are typically Rough Crafts; a lot of black, with pops of gold and swathes of carbon fiber trim. As always, the build’s crowned with a set of custom tank badges and pushrod collars.

Ultimately, Rough Crafts nailed the brief here. Dubbed ‘Nocturnal Unicorn,’ this is a fat tire Harley that manages to dodge all the tired cliches normally associated with the genre. 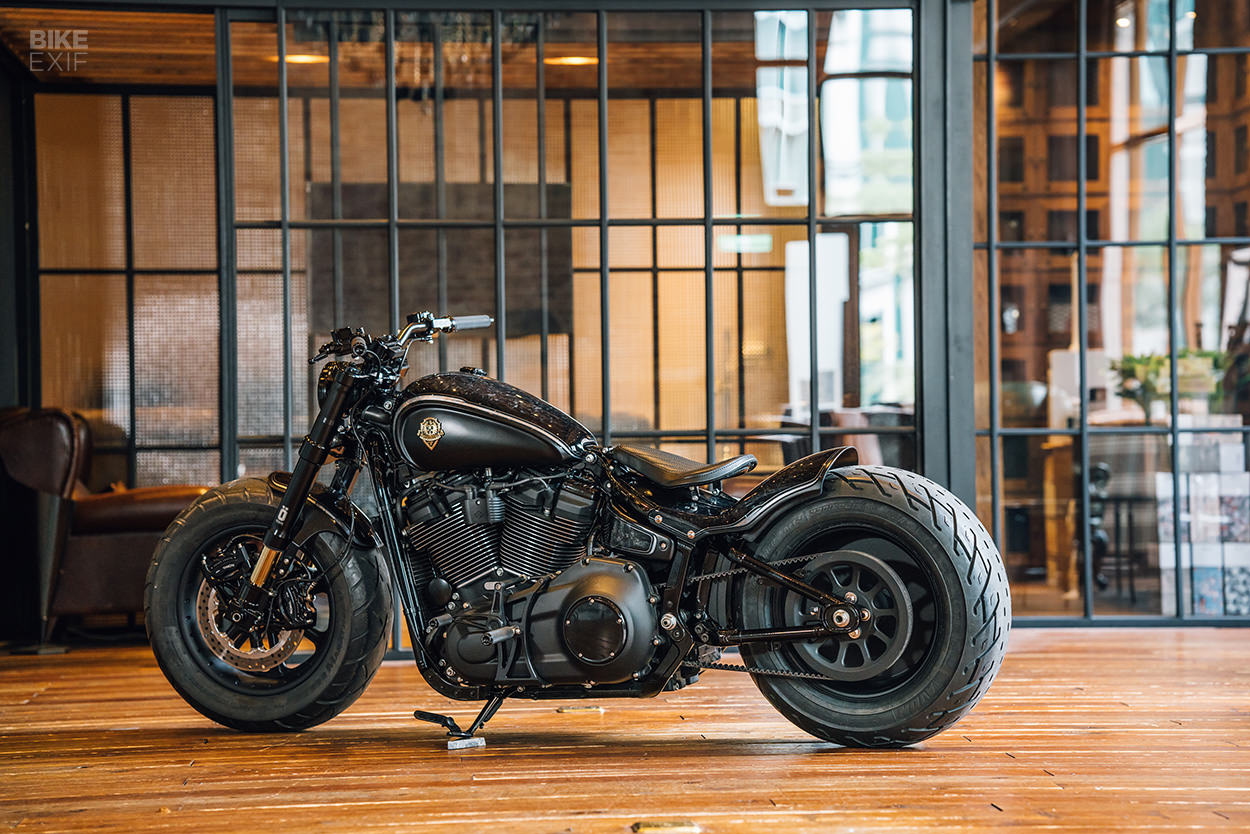 But what about the owner’s friend? As it turns out, he’s not a big fan of Harleys, so Winston steered him towards a Ducati Monster instead. And if you check back in tomorrow, we’ll tell you all about it. 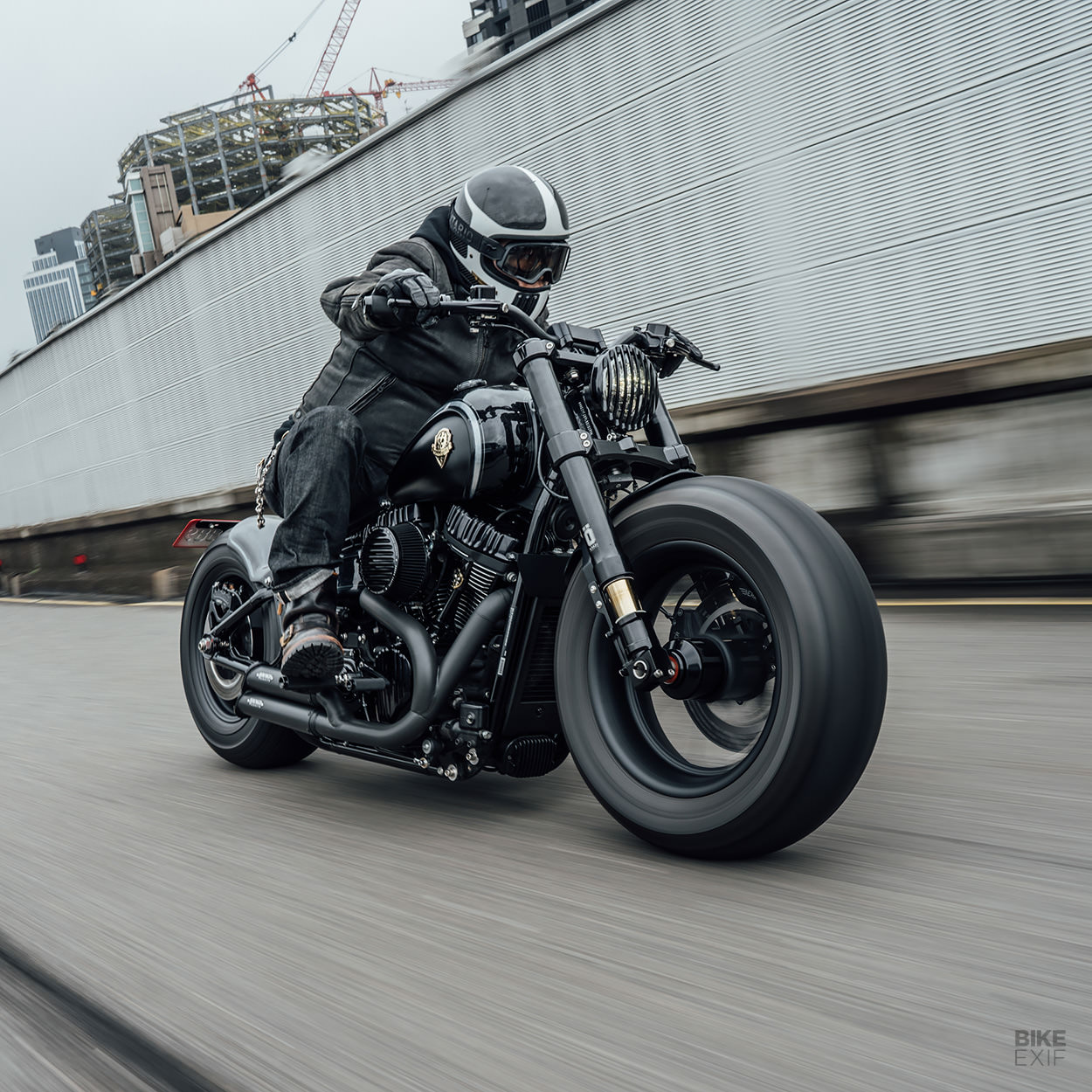