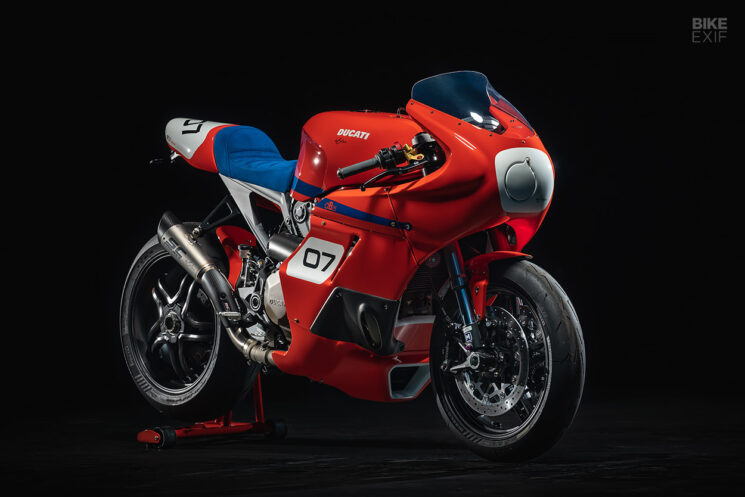 It takes a healthy measure of skill and talent to successfully run a custom motorcycle workshop. But even some of the industry’s top shops frequently outsource specialized tasks—particularly things like upholstery and paint. Those that can handle every last job in-house are a rare breed.

deBolex Engineering counts themselves among those ranks. The team of Calum Pryce-Tidd and Des Francis is currently neck deep in creating examples of their Ducati Monster 1200-based dB25 series bikes for customers. Each bike is tailored to its owner, with everything from the carbon fiber work to the seat trim happening inside the English workshop. 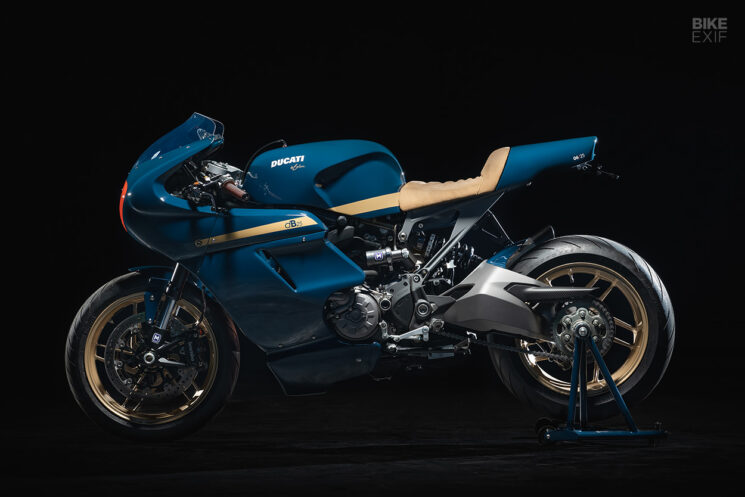 The dB25 series is a move from deBolex to offer their signature timeless style and high-quality finishes, at a slightly reduced cost and with a quicker turnaround. But it took some doing to get the series off the ground. The guys originally built a prototype with aluminum bodywork, then used it to build jigs and tooling to replicate the work in carbon fiber.

It now takes Calum and Des around three months to create a dB25 build. They start by producing the 22 carbon fiber body panels that adorn the Ducati Monster 1200 donor bike, and then do a ‘dry’ build to check the final fit. Finally, the Ducati is stripped for paint and trim. 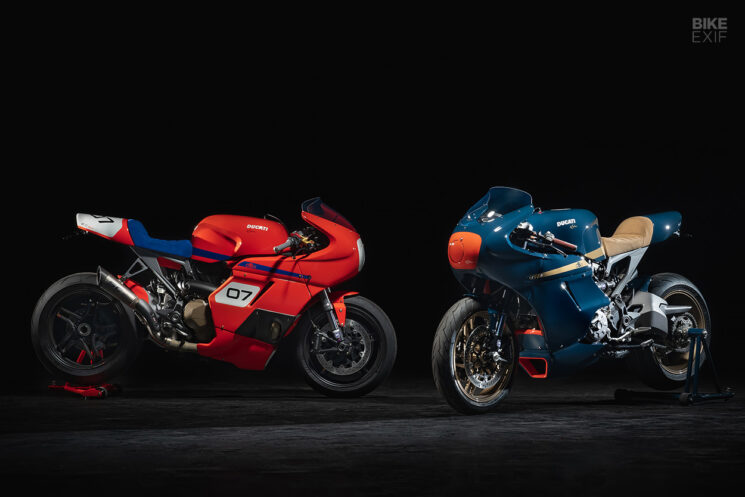 These two bikes are numbers six and seven in the 25-unit series. As per the dB25 design, they share the same carbon body kit, polymer fuel cell, CNC-machined subframe, and a plethora of smaller laser-cut and CNC’d parts. But their spec sheets diverge from there.

Resplendent in blue, ‘No6’ [below] is specced as a clean and classy runner. It wears its original forks and wheels, anodized black and gold respectively, with a new Maxton shock out back. 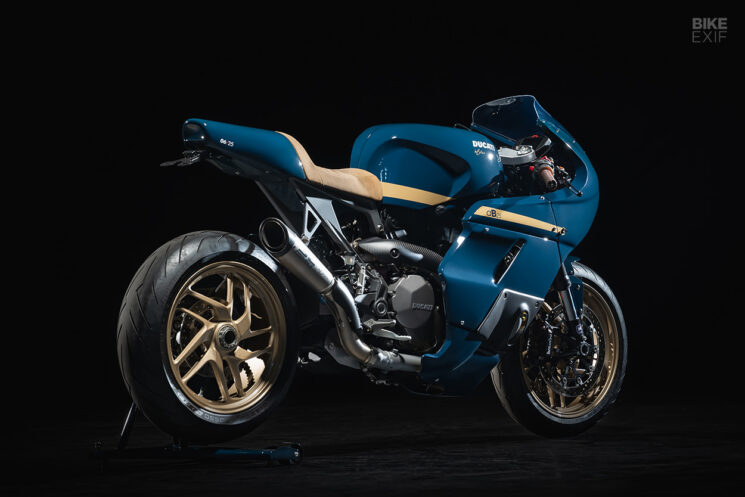 The engine’s been treated to a K&N air filter, with a titanium exhaust from SC-Project that the owner’s neighbors are sure to hate. It’s been tuned too, via an UpMap ECU chip.

The cockpit wears a CNC-machined top yoke with Gilles Tooling clip-ons. deBolex has repurposed the OEM speedo and switches, but the interchangeable bar-ends and bar-end mirrors [not pictured] are Rizoma parts. No6 also sports Magura brake and clutch master cylinders, Motogadget turn signals, and a full complement of stainless steel fasteners from Pro-Bolt. 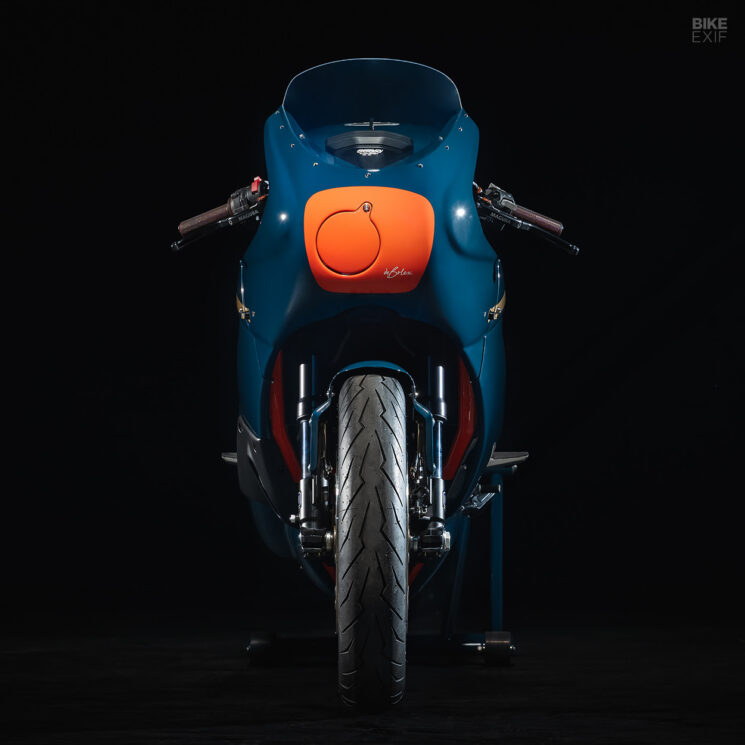 Classy liveries are a deBolex hallmark—and the clearest way for each customer to personalize their dB25. No6 looks especially tasty, with Alfa Romeo’s ‘Bluette’ color on the bodywork and main frame, and taupe striping that matches the Alcantara seat. The nose cone and the fairing’s air intakes are finished in orange, taking inspiration from the BRM Formula 1 cars of the 60s.

The new aluminum subframe is Cerakoted, along with a number of smaller parts (it’s the one task that deBolex outsources). Each dB25 also features deBolex’s signature OEM-style seat latch system, which guarantees quick access to the electronic bits. 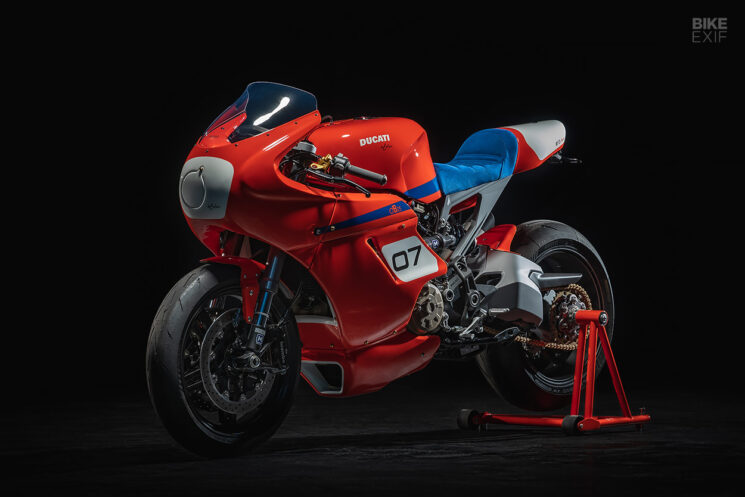 It’s not just their liveries that set these two bikes apart though. ‘No7’ [above] has a wild parts spec to match its fiery paint job.

It rolls on BST carbon fiber wheels, with new Maxton suspension components doing duty at both ends. There’s a Toby steering damper too, and its Brembo brake calipers grip upgraded Brembo Serie Oro discs. “All singing and all dancing, as my dad would say,” quips Calum. 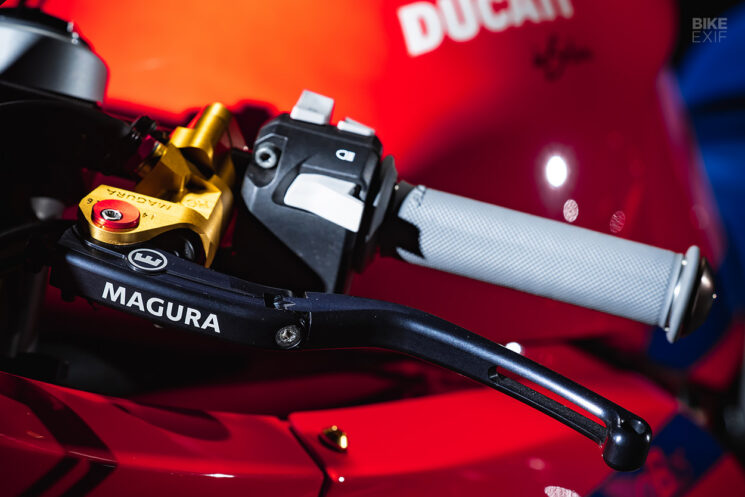 No7’s engine has also been treated to a K&N filter, an UpMap power tune and a titanium SC-Project exhaust system. But it also sports a new throttle spacer and a Translogic quick-shifter. There’s a full set of Pro-Bolt fasteners on here too, but these are all titanium.

Like No6, No7 is specced with Magura controls and a smattering of Rizoma parts, with the addition of a gas cap and foot pegs from the Italian parts manufacturer. 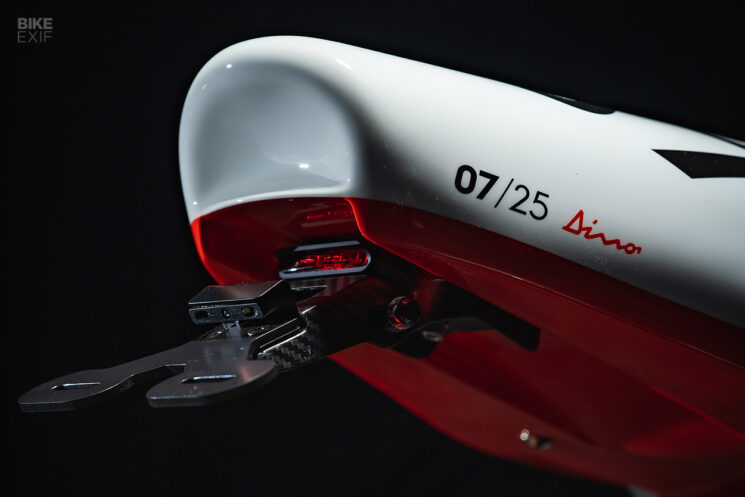 No7’s primary color is ‘Rosso Dino’—a swatch taken from the 1960s Ferrari Dino, which was named after Enzo Ferrari’s son. deBolex painted the ‘Dino’ logo onto the tail section too, as a homage to this. The bright blue stripe and Alcantara seat were also inspired by early Ferraris.

Extra Cerakote finishes on this dB25 include the engine covers and swingarm, with white accents sprinkled throughout the bodywork. Both No6 and No7 were sold with paint-matched paddock stands, and No7 even has a matching helmet. 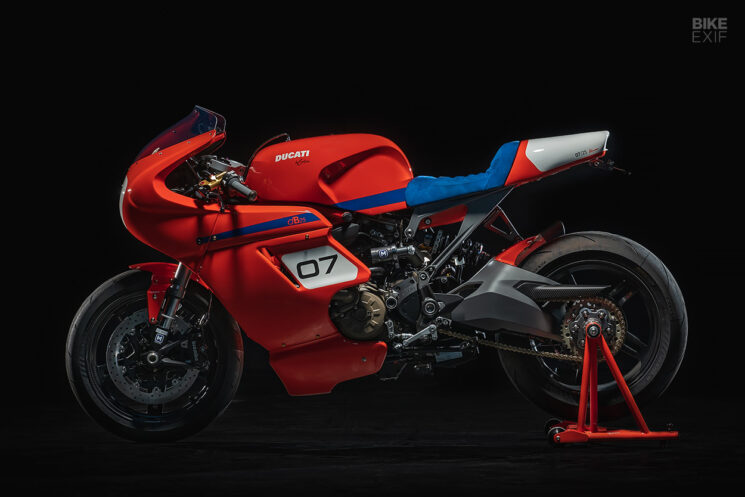 There’s no rest for Calum and Des though—they already have the next three dB25 builds booked in, with each headed to a different country. Looking at how good No6 and No7 turned out, is it really surprising that they’re busy? 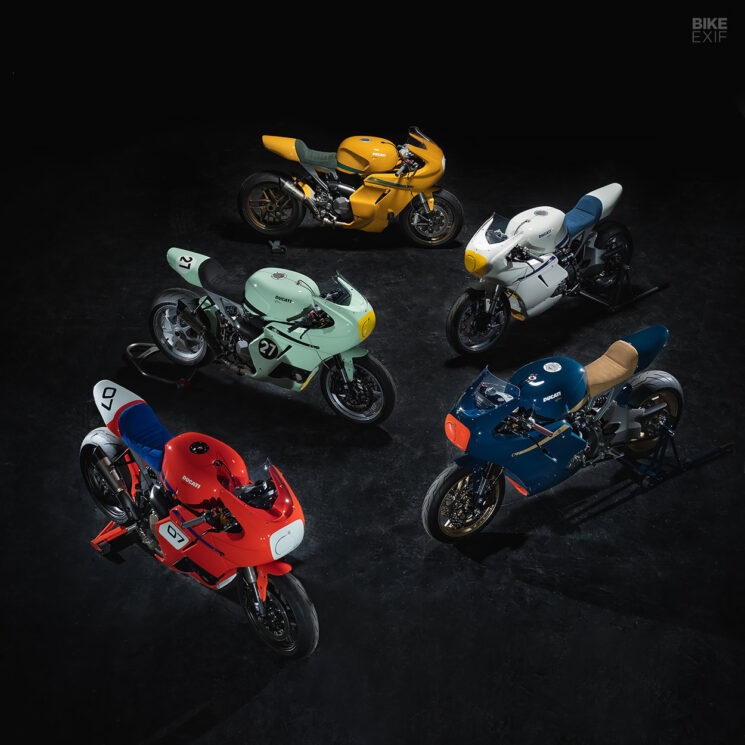