On Trend: A Ducati Scrambler street tracker from Vietnam 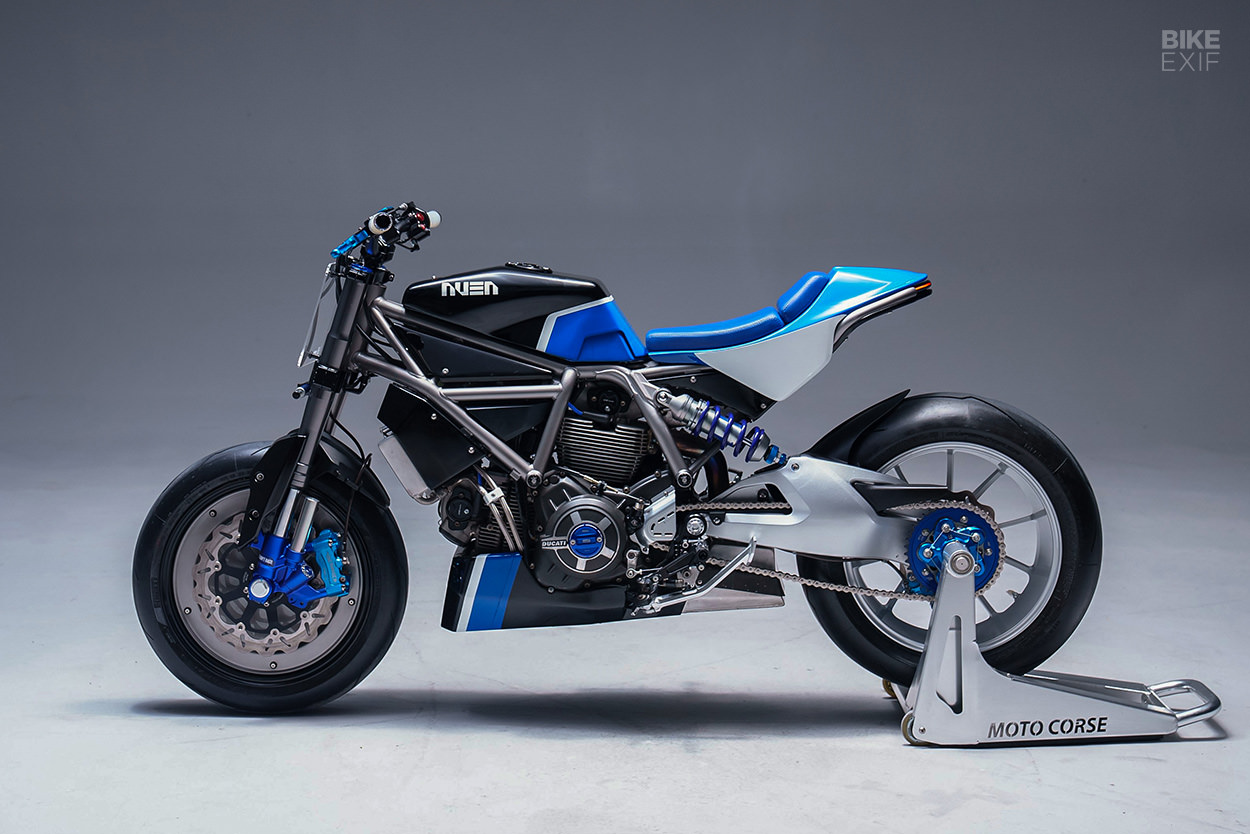 It’s not always pretty when the worlds of fashion and motorcycles collide, but some companies know how to do it right. Vietnamese apparel brand NUEN is a fresh face on the scene, but their first custom motorcycle build proves that they’re not playing around.

Built using a 2015-model Ducati Scrambler 800 and named ‘Nu-One,’ this street tracker’s stark and minimalistic vibe is representative of NUEN’s overall design ethos. The brand has its roots in Sweden, and founder Gia Nguyen is dead set on bringing some of those Scandinavian sensibilities across in their work. And that counts for both their apparel and their bikes. 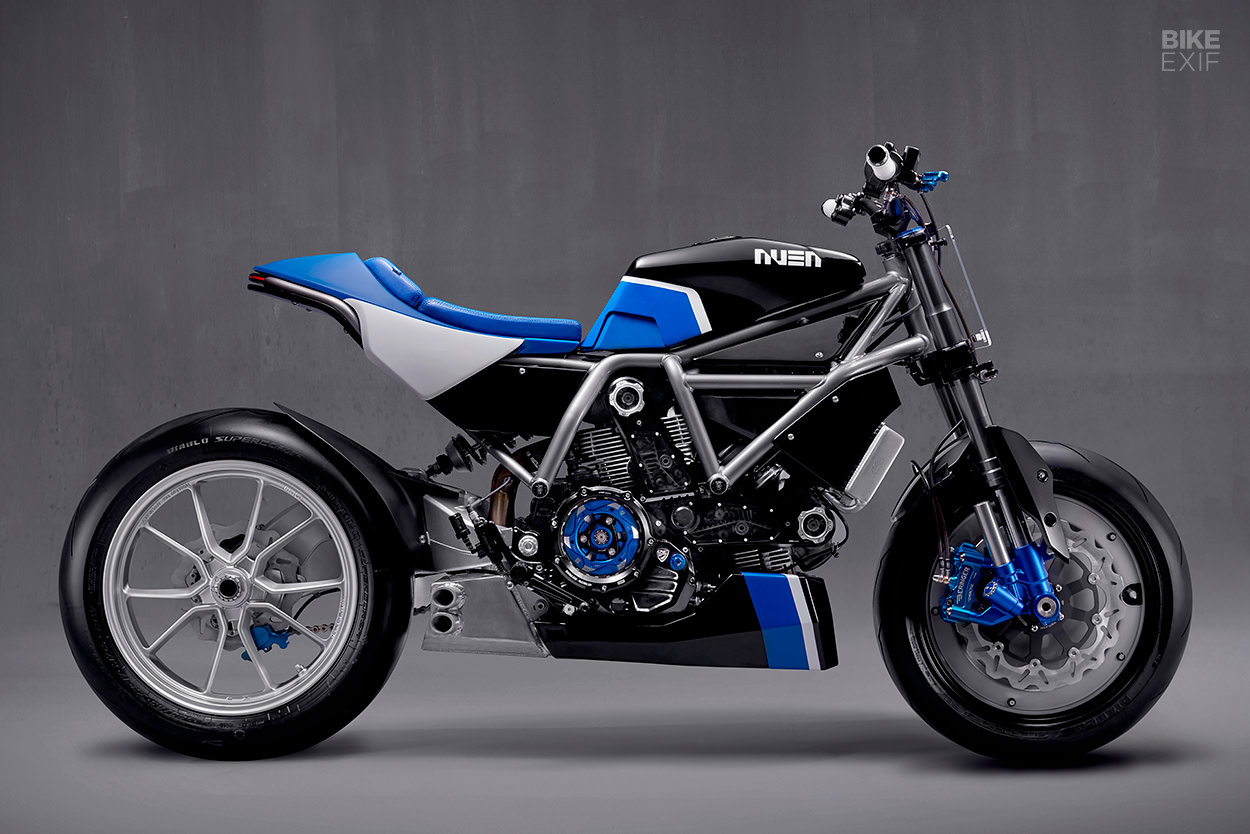 NUEN don’t have all the skills in-house to pull off a build like this by themselves. So they opted to focus on the design, and assembled a crack team to help them bring it to life.

Local custom shop Chucha Shed Garage did most of the heavy lifting, while a handful of local craftsmen in Ho Chi Minh City machined various parts. NUEN played it smart too—some of the sweetest pieces on this build are direct bolt-ons. 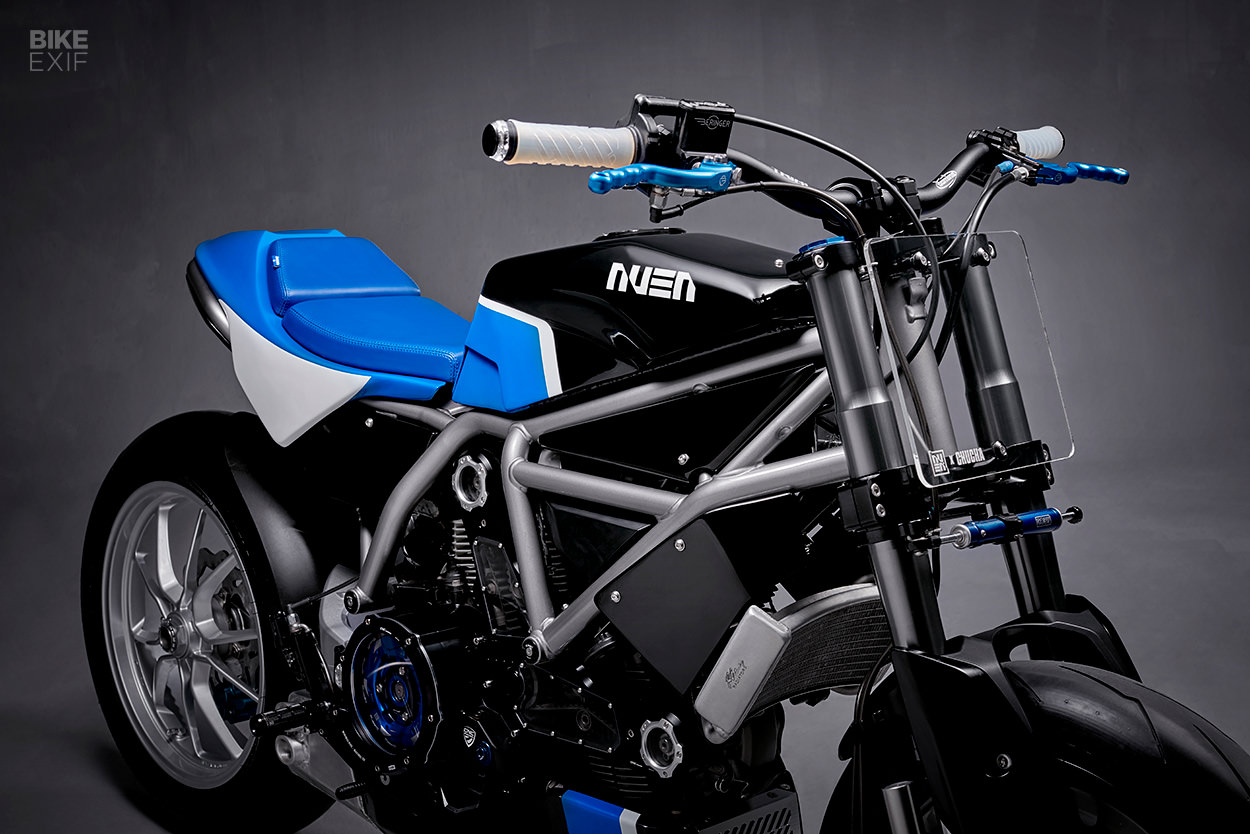 For starters, the fuel tank is a plug-and-play kit from Bad Winners in France. It uses an aluminum fuel cell under a cover, and includes a neat pair of blank-off plates that sit ‘in’ the trellis frame to hide the ugly stuff. The crew modified it by adding cutouts near the seat, and color-matching the fuel cell underneath.

The fuel cap looks like a high-end off-the-shelf part, but it was actually machined specifically for this project by Moc Tu CNC Parts. We’re fans of the Bad Winners Ducati Scrambler kit, so it’s nice to see it being put to good use here with some clever personalization. 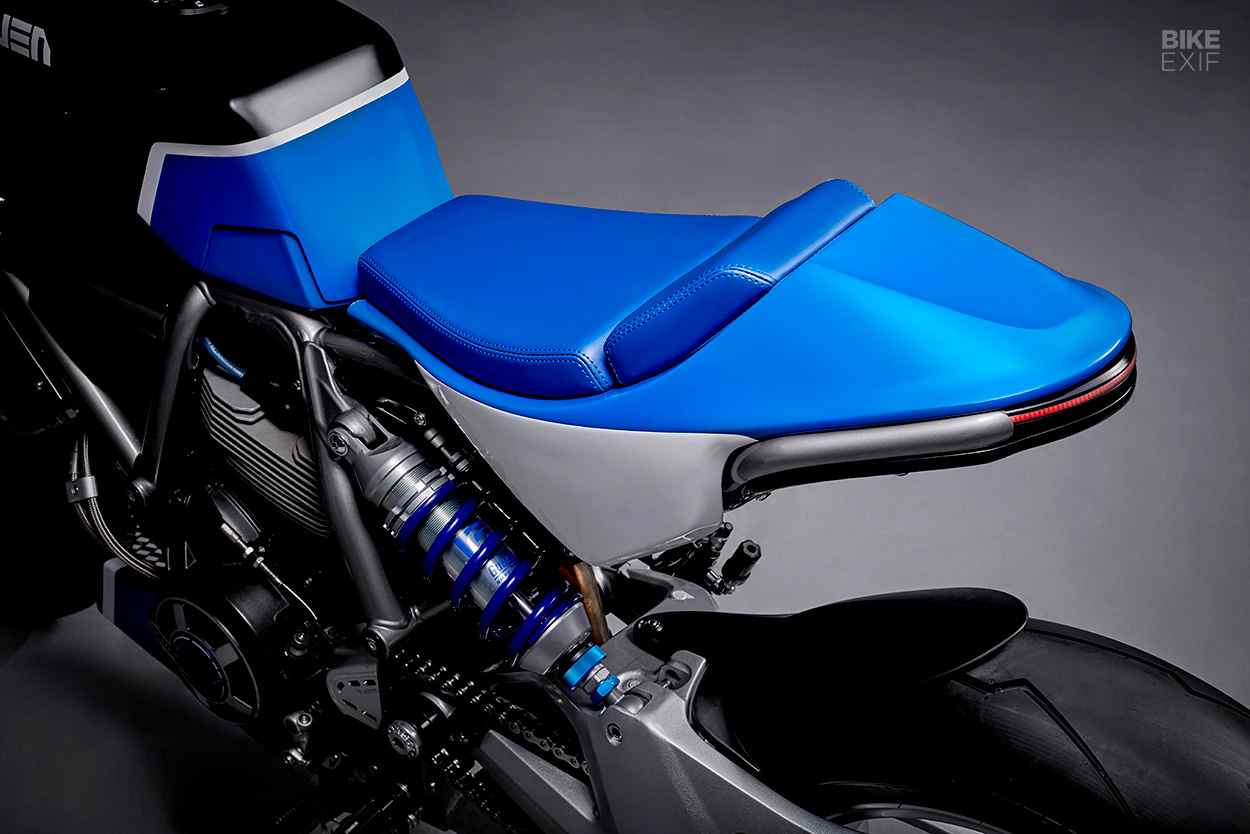 The flat track-style rear section is another fit-and-forget item, and comes from BRKT Moto in the US. NUEN had it capped off with a two-piece seat, upholstered in a striking blue. There’s a tidy LED strip mounted out back, with a one-piece blank off plate and electronics box underneath.

Kim Thanh was responsible for that bit of fabrication, and the new belly pan and oil cooler cover. There’s a lot of detail down there, with a CNC-cut mesh cover at the front end of the belly pan, and a custom box exhaust muffler tucked in at the back. 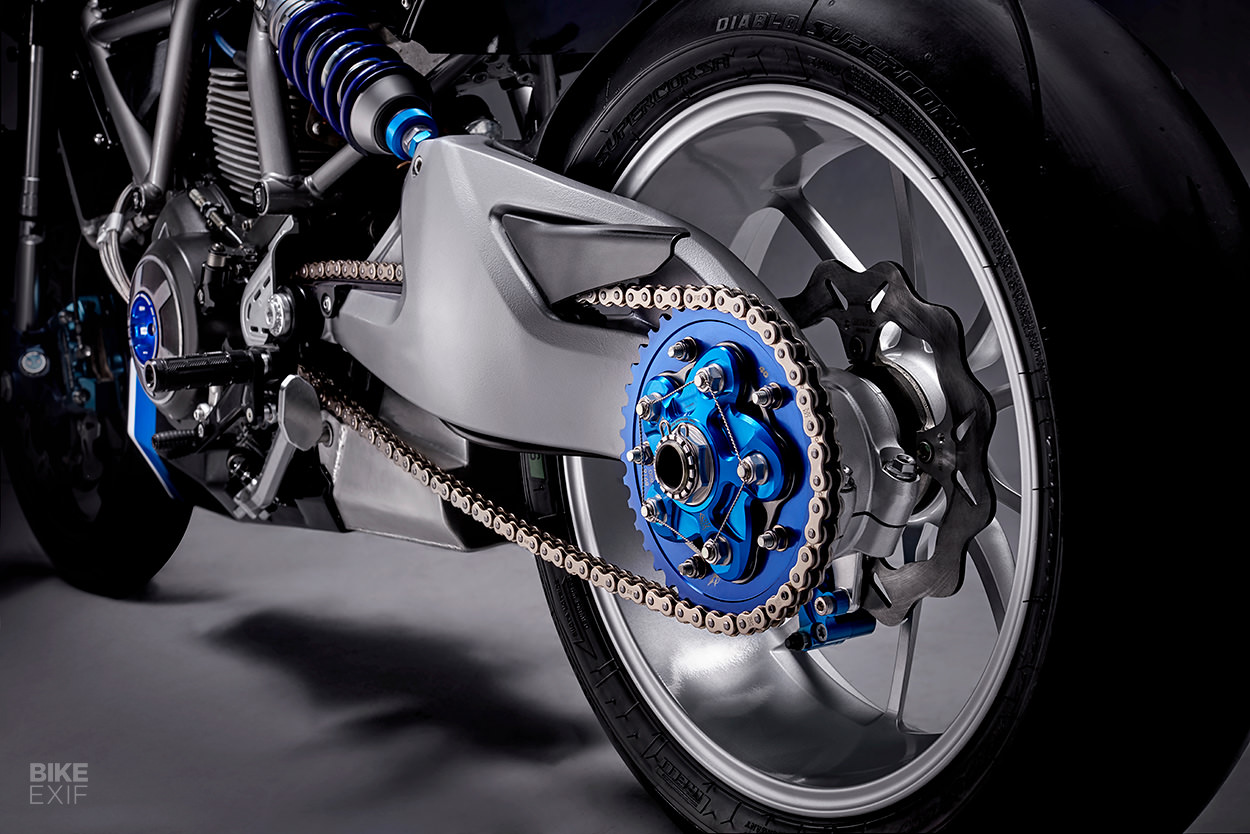 Some of the other part swaps on this Scrambler required a little more effort. Up front are the upside-down forks from a Kawasaki ZX10R, anodized to match the overall color scheme. They’re held by custom yokes from Moc Tu CNC Parts, and fitted with the fender and fork guards from a Ducati Hypermotard 821.

The Hypermotard lent its single-sided swingarm too, connected to an FG Gubellini rear shock. The 17” wheels were scalped from a Ducati Monster 1100, and are fitted with a CNC Racing rear hub flange and Pirelli Diablo Super Corsa tires. Beringer calipers with Galfer discs handle braking duties. 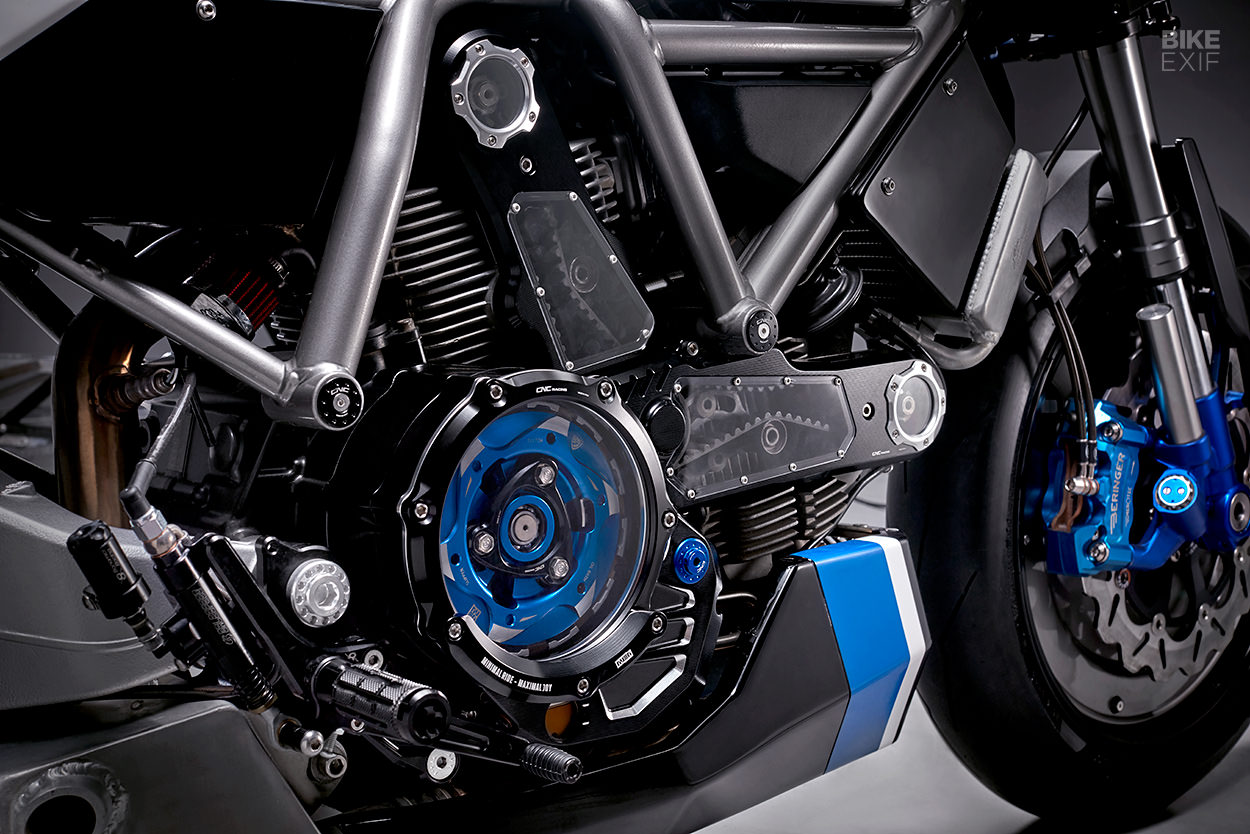 NUEN threw a whole bunch of performance and dress up parts at the Scrambler too, but none of it feels gaudy. There’s a new oil cooler from CC-Racing Garage, with the belt covers and oil filler cap coming from CNC Racing. The team installed a Hypermotard clutch too, along with CNC Racing clutch cover, and a Ducabike clutch slave cylinder and front sprocket cover. 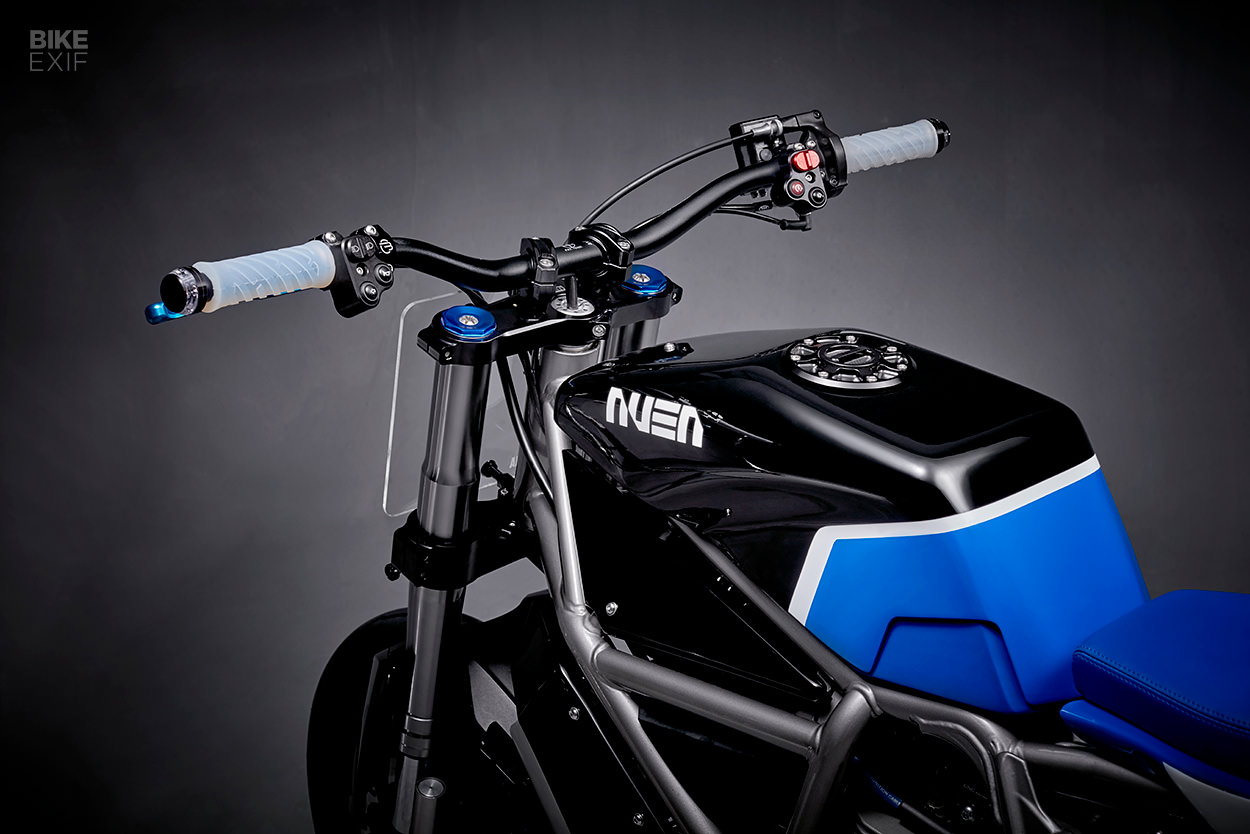 Up in the cockpit are new Domino bars, dressed with Hookie Co. grips and Motogadget bar-end turn signals. Beringer controls are hooked up to a stunning set of switches from Renard Speed Shop. Other upgrades include Bonamici rear sets, a Toby steering damper, and a custom side stand from Moc Tu CNC Parts.

Going deeper, the bike’s been rewired with an Antigravity Lithium-ion battery, and a Motogadget mo.unit module and keyless ignition system. NUEN wanted to maintain the appearance of a race bike, so the speedo’s been hidden ‘inside’ the chassis (removing it totally would have caused headaches). 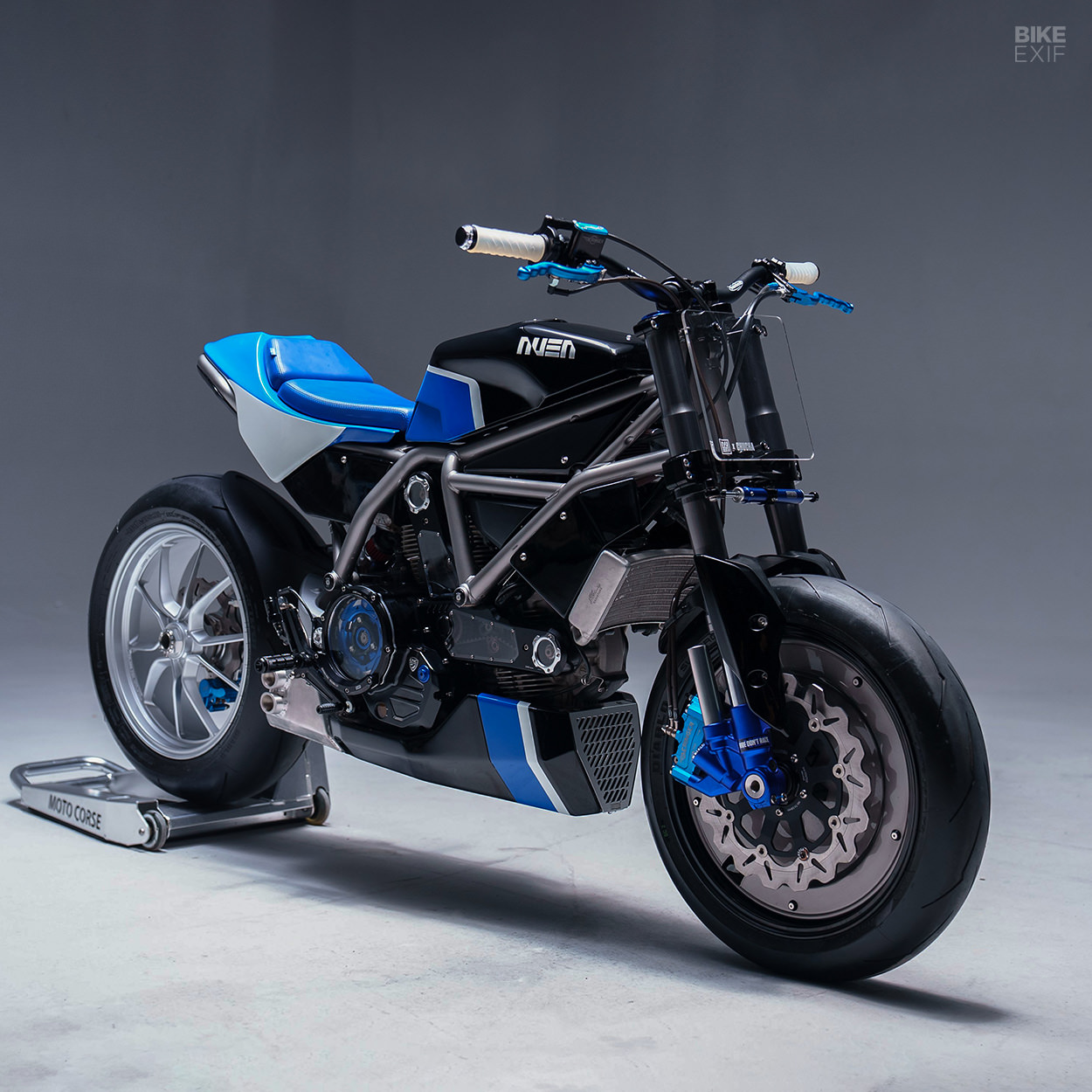 The only engine upgrade is a K&N Filter, but that’s okay given how nippy the Scrambler is in stock guise. Especially when you consider the diet this one’s been on—between the mods and a brisk de-tabbing of the frame, Gia puts its weight at around 353 lbs now. “The bike is very light, nimble, and fun to ride,” he reports.

It looks razor sharp too, thanks to a striking livery that plays with NUEN’s brand colors. Top marks to them for their tasteful use of blue anodized parts too—an idea that so easily could have gone overboard. 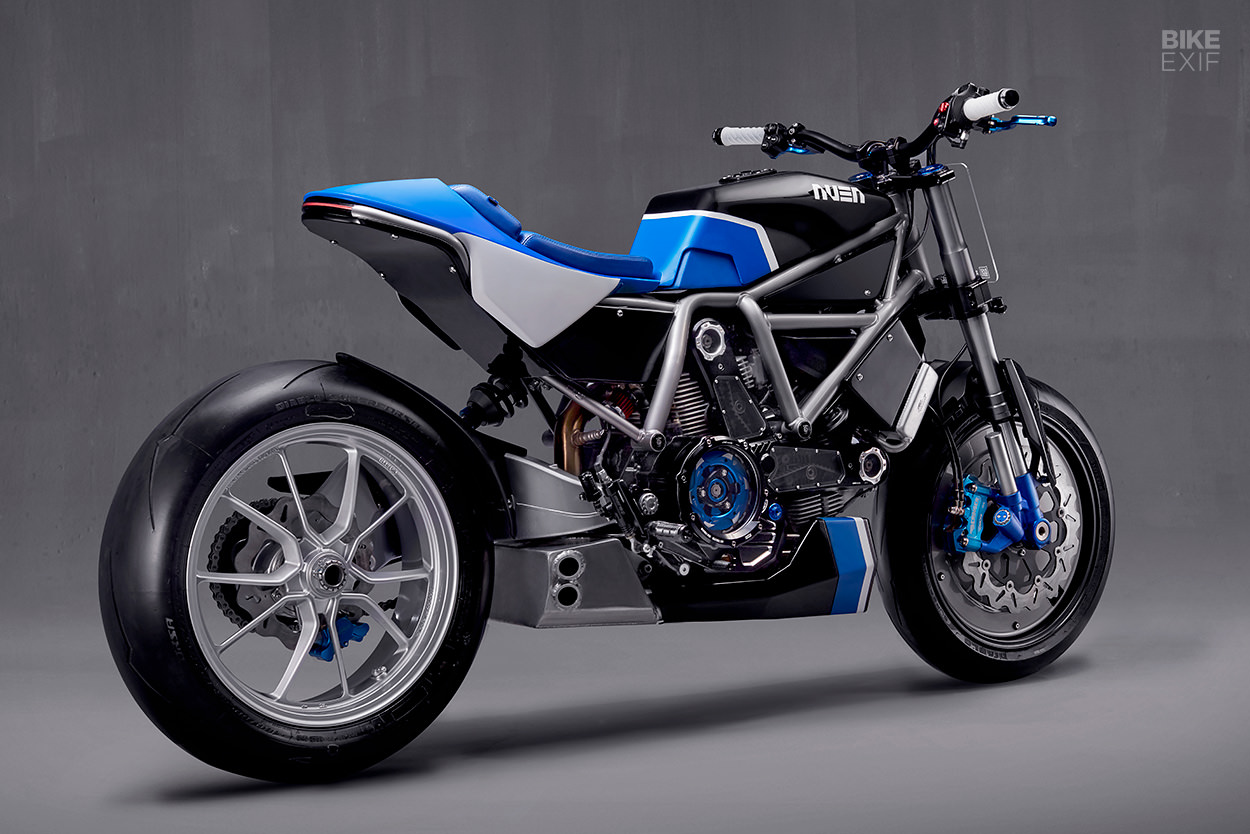 It’s a stellar first effort from this young crew. If their upcoming apparel line looks as good as this Ducati, they’ll be unstoppable. 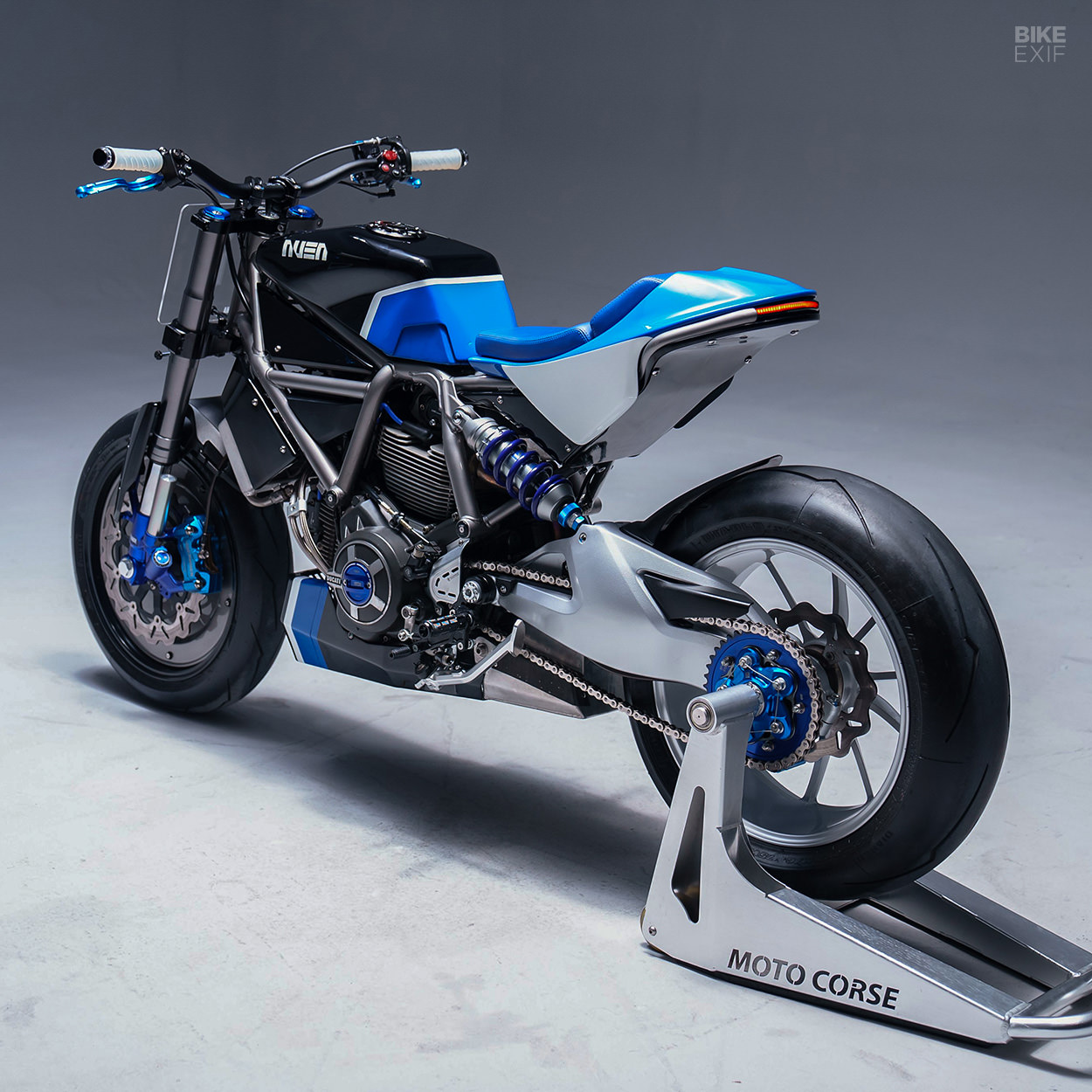