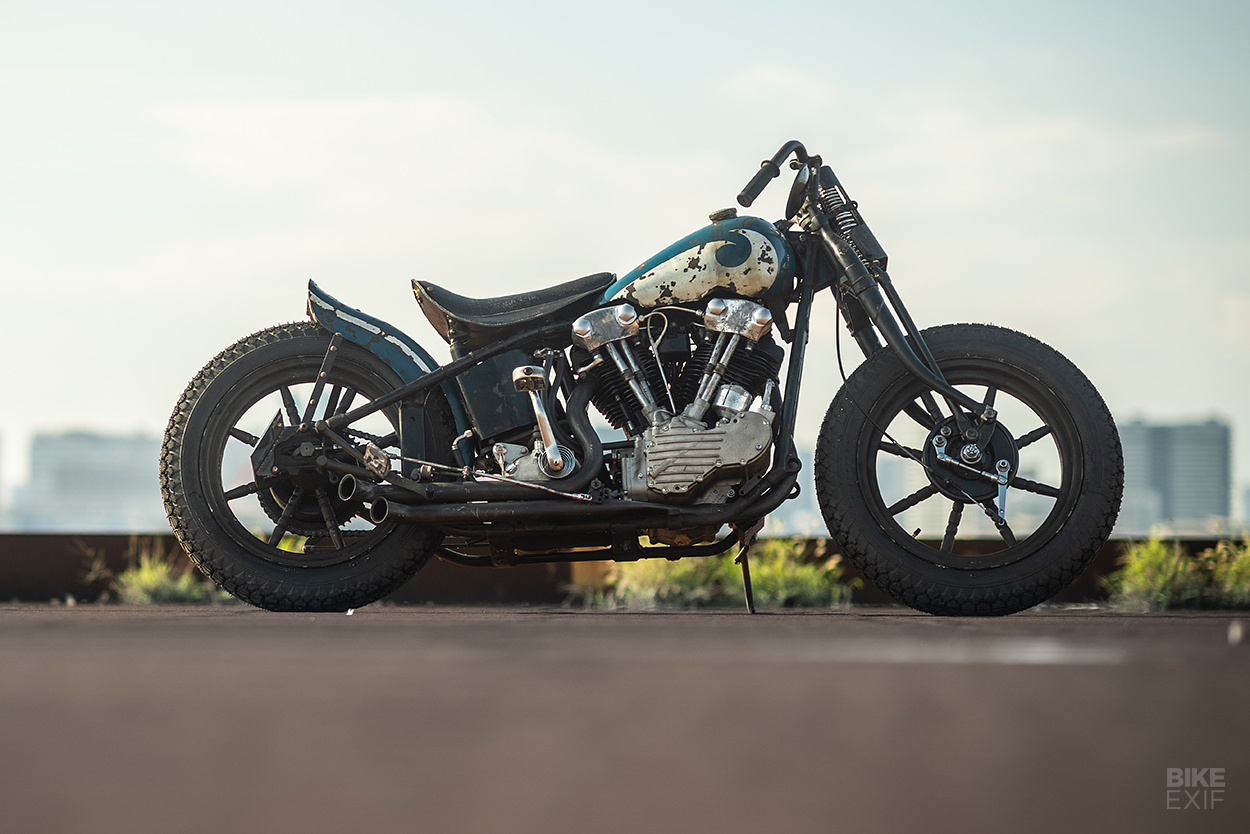 When we first saw images of this bike from Custom Works Zon, we assumed it was a restoration job. And it looked like builder Yuichi Yoshizawa would have to use all his legendary skills to get the knucklehead roadworthy again.

It turned out that we were wrong. This remarkable ‘vintage racer’ is actually a ground-up build: a client commission designed to evoke the spirit of classic V-twin competition machines, dents and all. 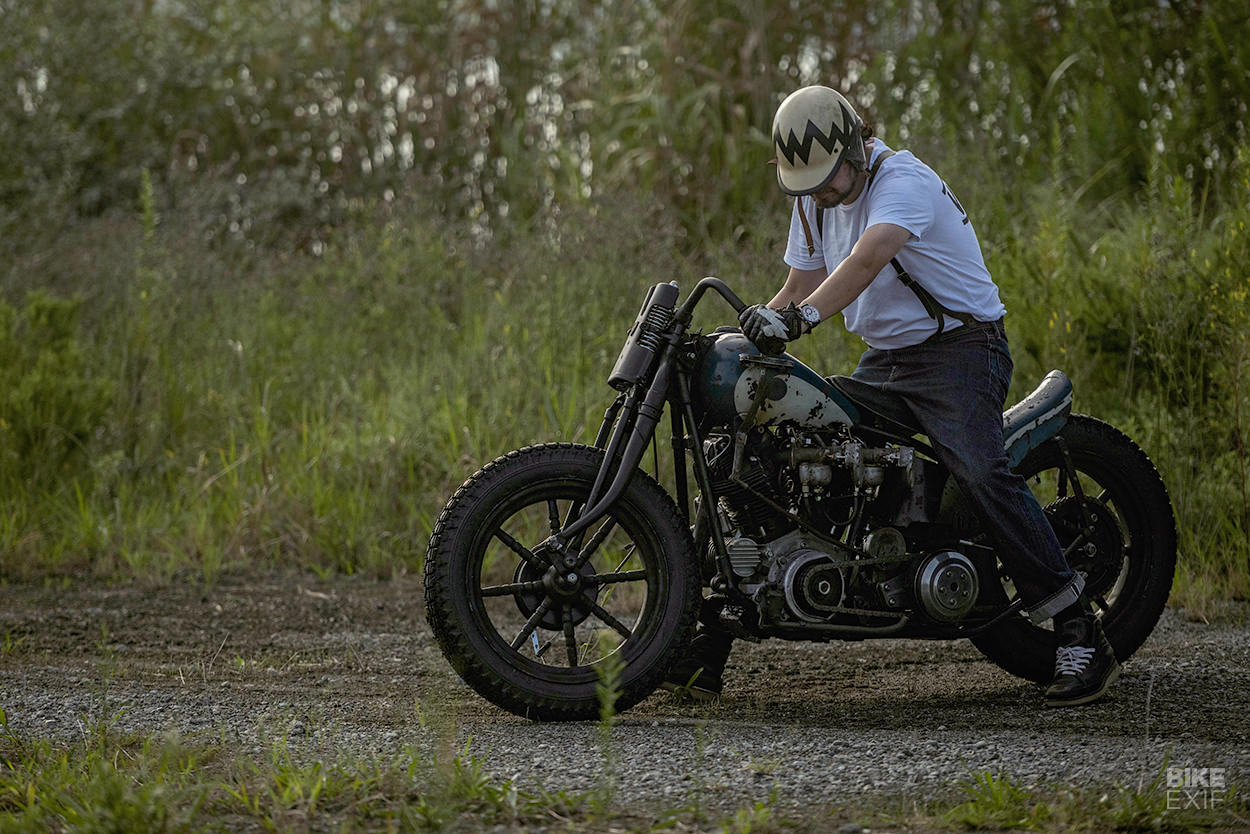 We’ve never tagged CW Zon as a retro-leaning shop, because most of their creations are sleek and highly–finished. But the best builders have a habit of throwing sudden curve balls, and so it is here. “I imagined an old racer, and imagined how it would get dirty,” Yoshizawa-san explains. “I enjoyed ‘ageing’ it.”

Virtually all the parts are custom-made. A mere handful aren’t, such as the steering neck, seat post and rear axle. Fans of classic V-twins will also clock the S&S KN93 engine—a well-engineered update of Harley’s original knuck motor. 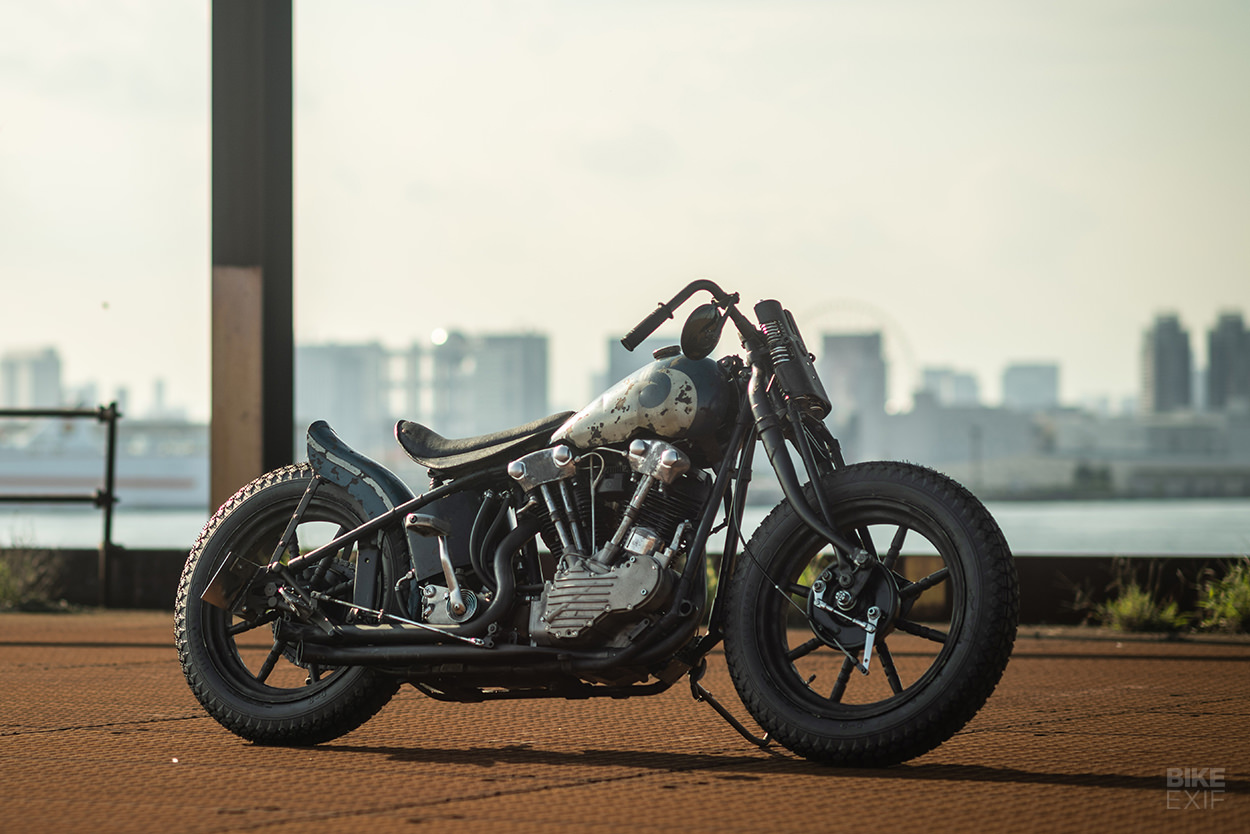 It’s got generator-style crankcases, a capacity increase from 74 to 93ci, and a stump-pulling 83 lb-ft of torque, delivered at around 3,000 rpm.

Yoshizawa has kept the S&S ignition that these engines usually employ, but not the S&S Super E carburetor. Instead, he’s chosen an unusual twin-carb setup that looks terrific, but was extremely tricky to plumb in. 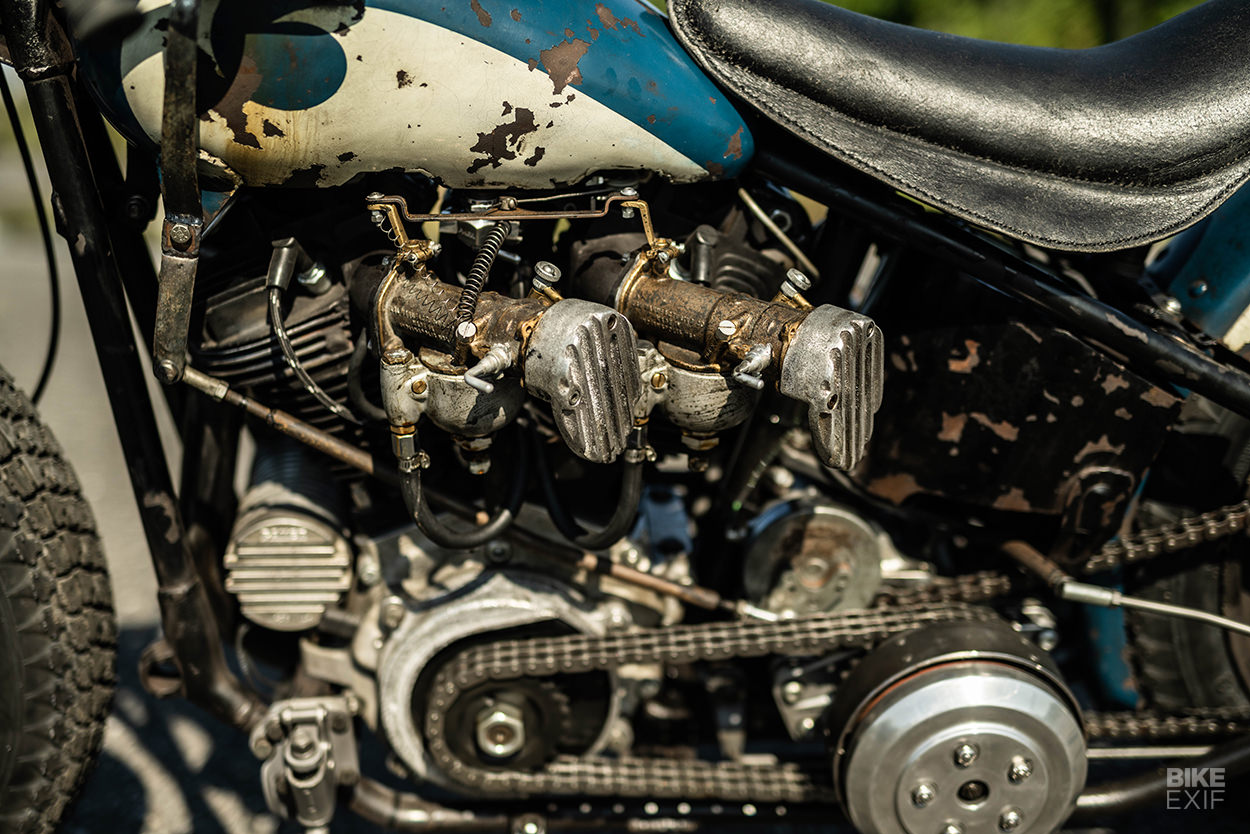 With the help of local specialist Flat Head Power, CW Zon modified the cylinder heads to accept a pair of Linkert M88 carbs. Usually found on war-era Army side valve engines, they’re now sitting on handmade manifolds and operated by a custom linkage.

The hefty OHV engine is hooked up to a kicker four-speed transmission and cradled in a completely custom steel frame, which Yoshizawa built by hand. 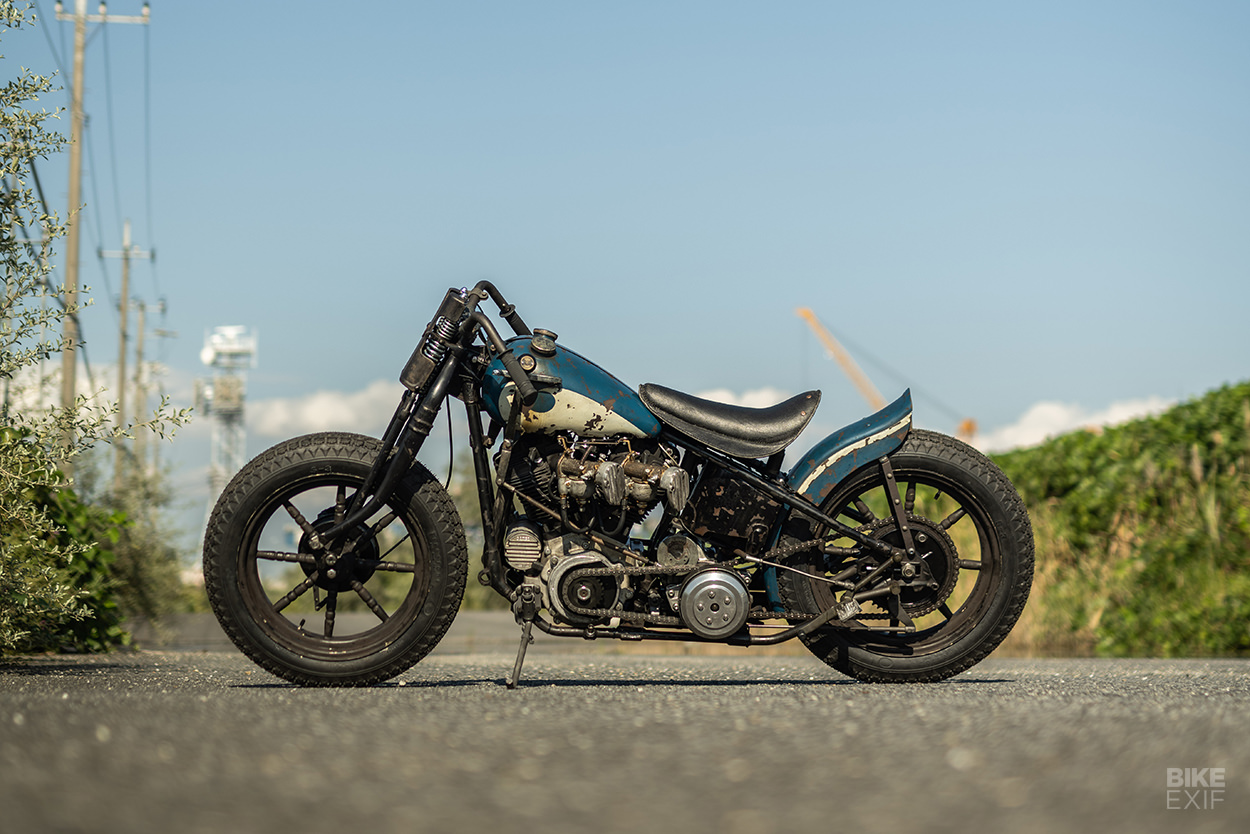 Although it’s based on the original FL frame, Yoshizawa’s version is about four inches shorter than stock—which gives the bike a remarkably compact look.

The frame is hooked up to hill climb-style springer forks, based on the factory design used between the wars. CW Zon have modified this design, shortening it by four inches for road use, and narrowing it by around an inch too. 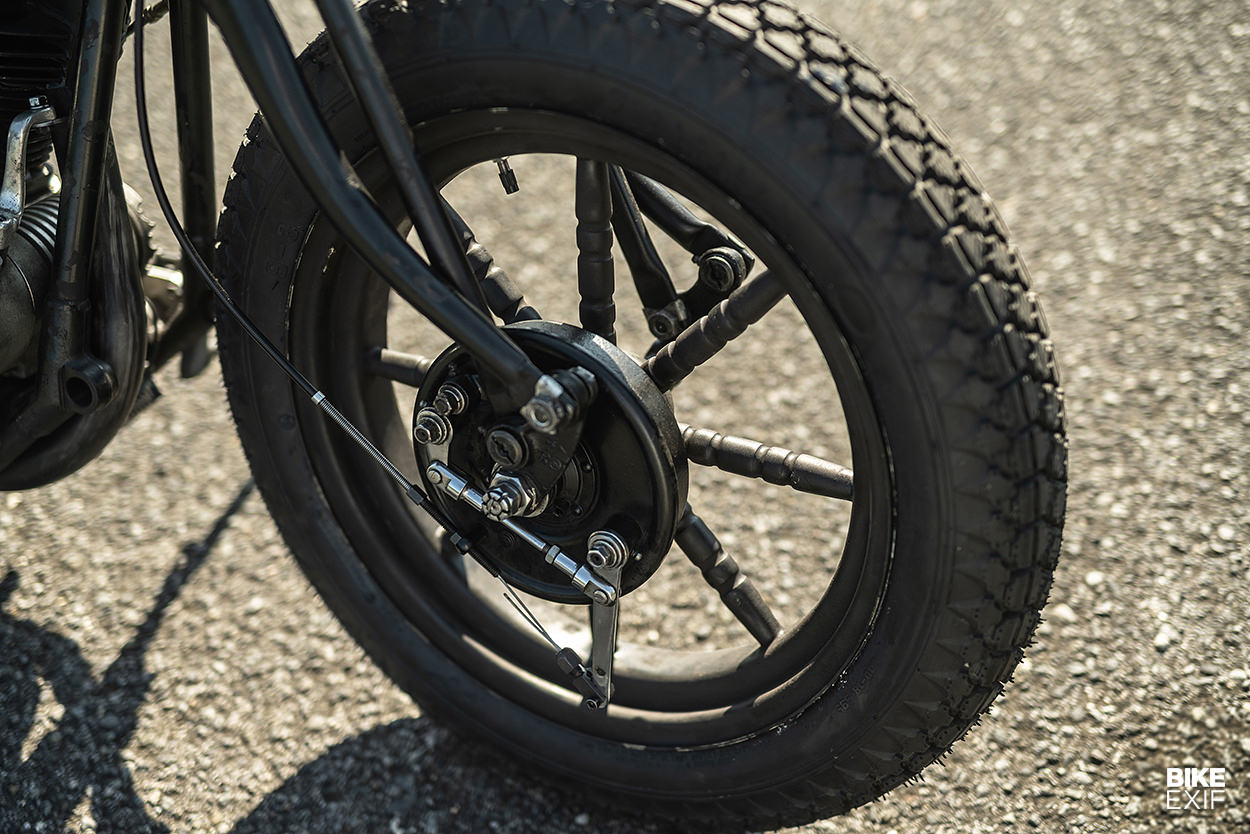 The front brake is typical of that used on old springers, being a twin-leading shoe drum setup. But the wheels, shod with period-correct 400-18 Firestone ANS bias ply tires, are most unusual.

Built by Sansei in Kyoto to CW Zon’s design, the rims are both 18×3.5 inches and attached to custom-machined hubs using hollow pipe spokes. The lathes were working overtime, but the effect was worth it. The rear is especially neat, with a one-off brake/sprocket drum assembly and custom linkage. 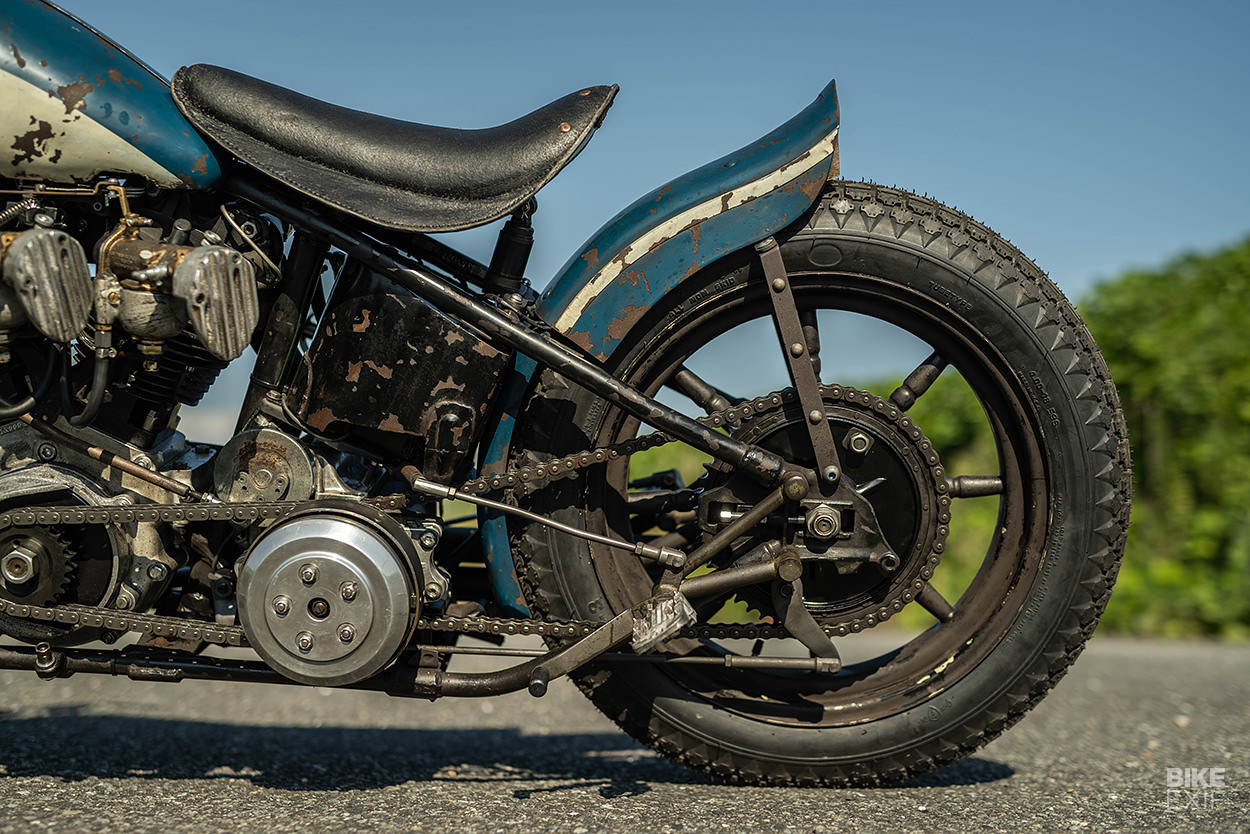 CW Zon fabricated all the bodywork in-house, although it looks like it has spent most of the past 80 years being thrashed around a paddock. The tank is even slightly dented; fitted with authentic screw-on caps, it sends gas to the twin carbs via a Pingel dual-outlet fuel valve.

A grimy and weathered flush-fitting nacelle covers the fork springs, but also hides discreet Kellermann LED lighting peeking through a pair of drilled holes. We’re not sure how effective the beam pattern will be—or the tiny matching blinkers—but maybe they’re enough to make the bike road legal in Japan. 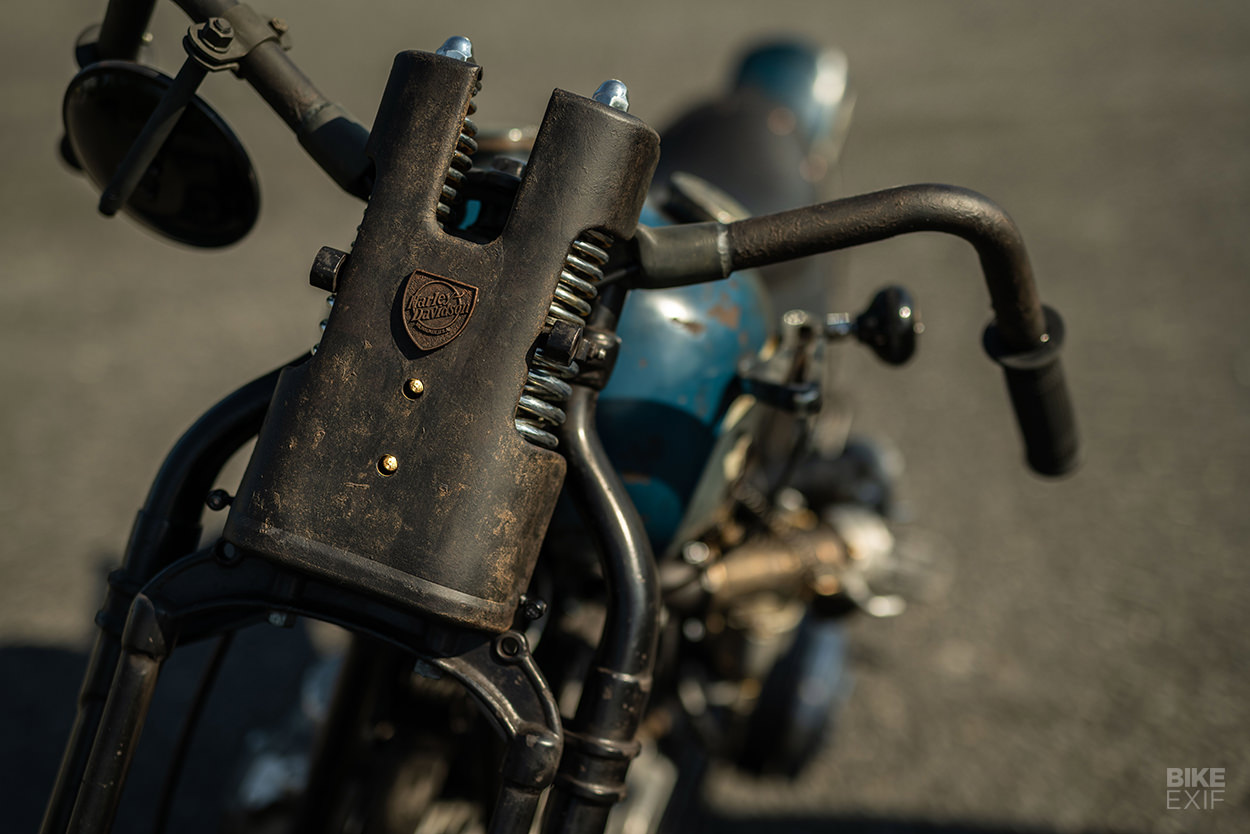 The seat looks like a barn find, but it’s entirely new. It’s plush and comfortable, as befits a hardtail, and was crafted (and aged) by CW Zon collaborator Kurei Yonsoku.

He based it on the race seats typically used in the 1930s, and it’s braced by a stay underneath that Yoshizawa fabricated to replicates a traditional casting. The stay is hooked up to an old school shock unit for extra absorption. 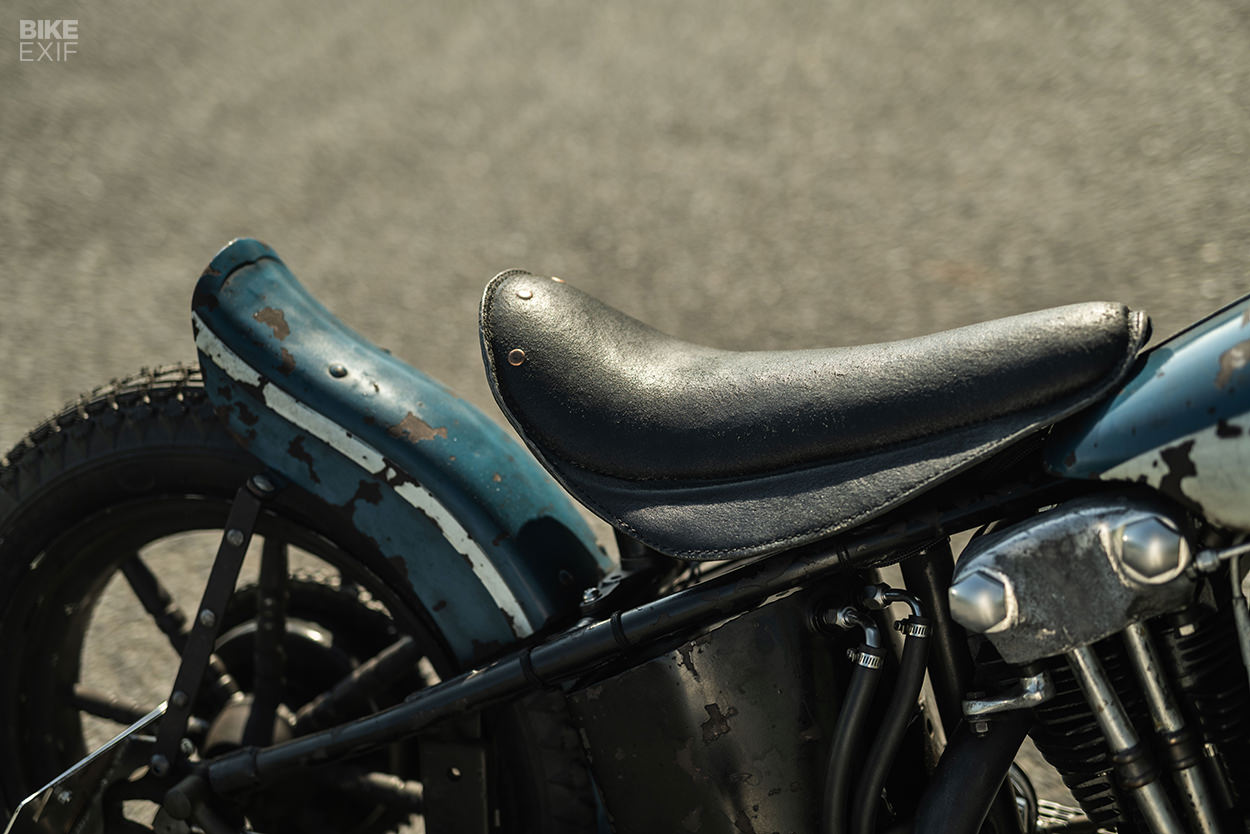 All the smaller hard parts are hand-turned, from the hand and foot controls to the beautifully swept bars.

If something looks clunky or grimy, you can bet it’s deliberate. Because all this engineering would be for nothing if the bike looked like a sleek and shiny restomod. 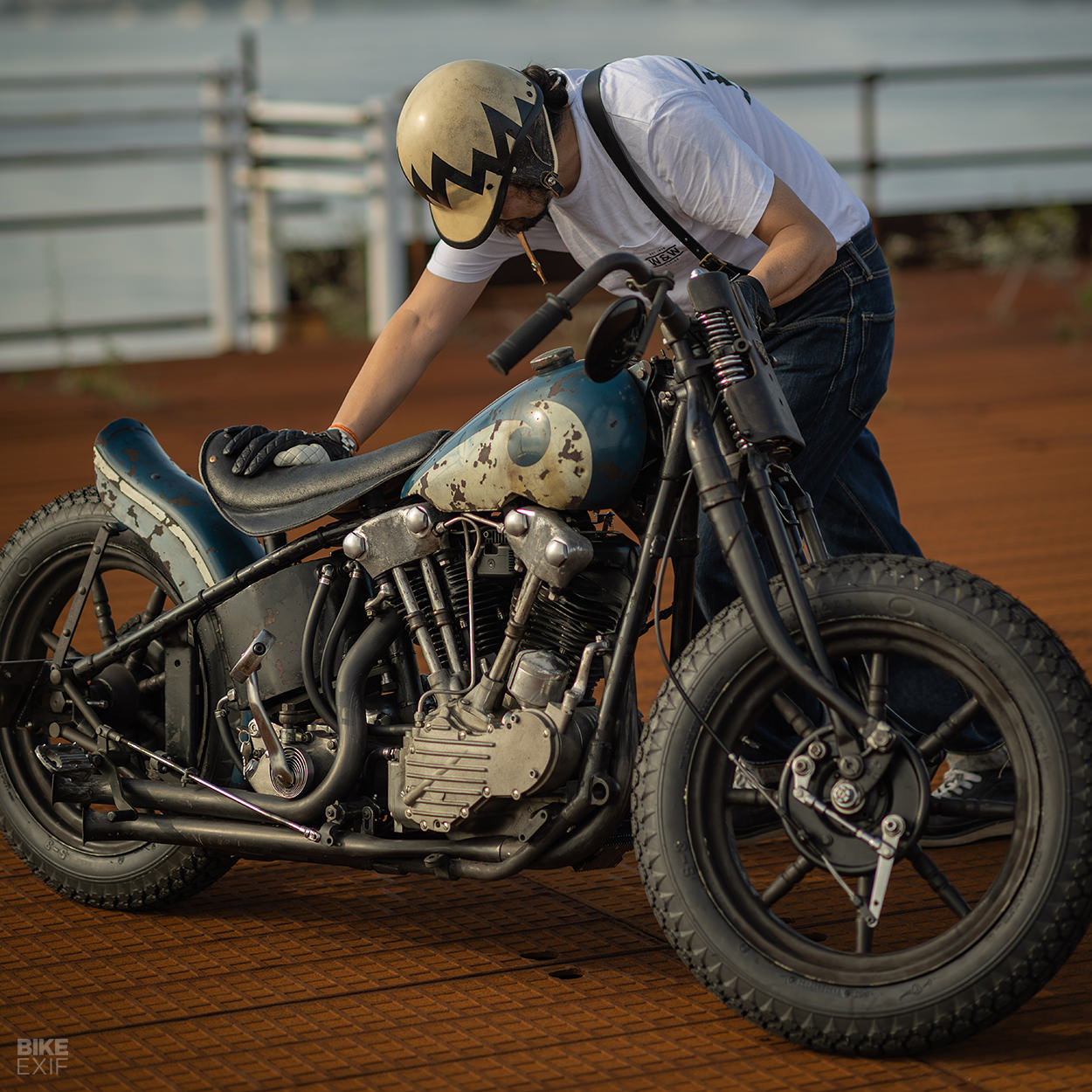 The exhaust system, for example, is the murky monochrome color you’d expect to see on an ancient and unloved bike.

But the nondescript-looking custom pipes were first coated with high temp white paint, and then sooted up. Over time the white may peek through, but for now, it’s a million miles away from the ‘show finish’ you’d see at a Pebble Beach concours. 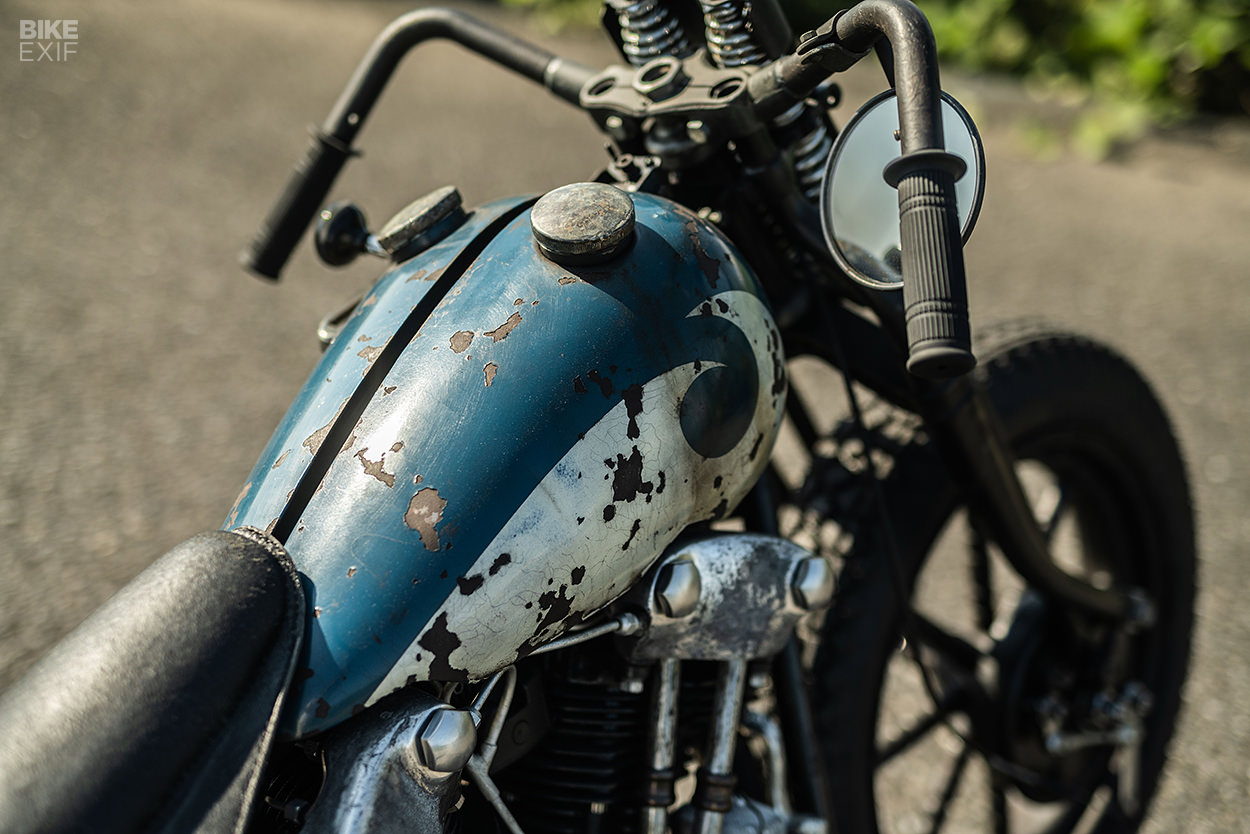 CW Zon enlisted the help of the Kobe paintshop Aozora Works to get these effects. The skill involved is unreal, from light weathering on the frame to real rust and gasoline streaks on the tank.

Yoshizawa gave the knuck a shakedown a few days ago at the Chirihama Sandflats event, which is the Japanese equivalent of The Race of Gentlemen in the US (or the Normandy Beach Race in France).

And what a sight that must have been. This is one of the best V-twin customs we’ve seen in the history of EXIF. 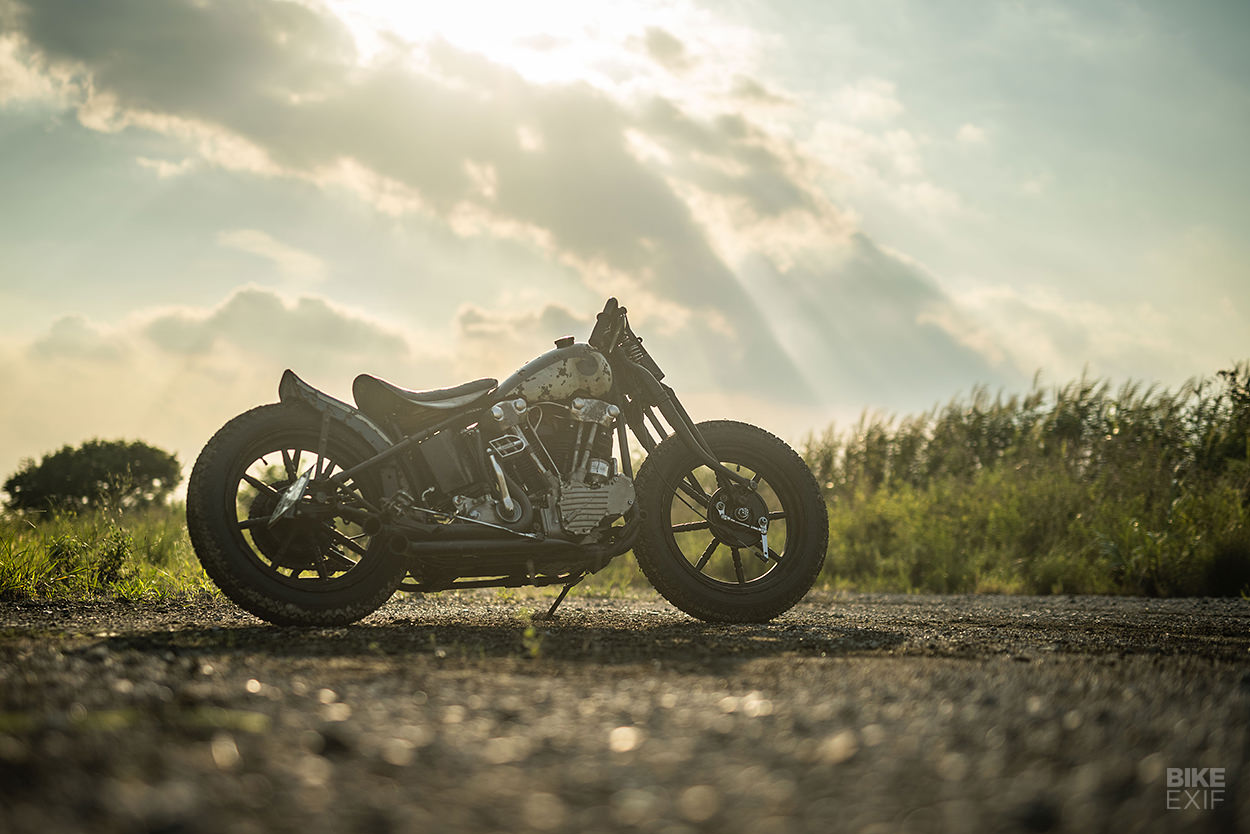