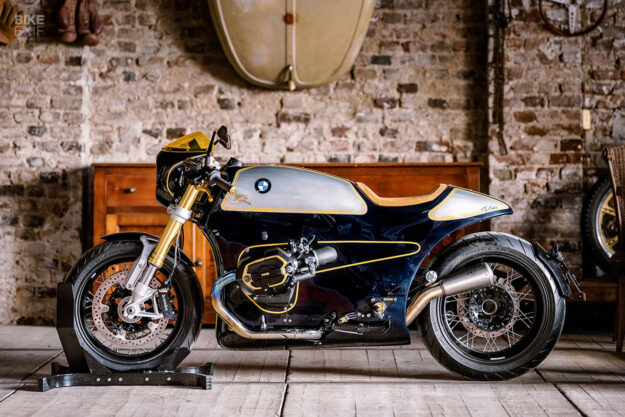 BMW R nineT owners are spoiled for choice when it comes to personalization options. The bike has been out long enough that every major player in the aftermarket industry now has an array of bolt-on bits for it. But if you want something truly unique, you’re better off turning to a pro—like Dirk Oehlerking.

Operating as Kingston Custom out of his workshop in Gelsenkirchen, Dirk isn’t known for doing things in half measures. So when a customer asked for a mild makeover for his R nineT, Dirk said nein danke. 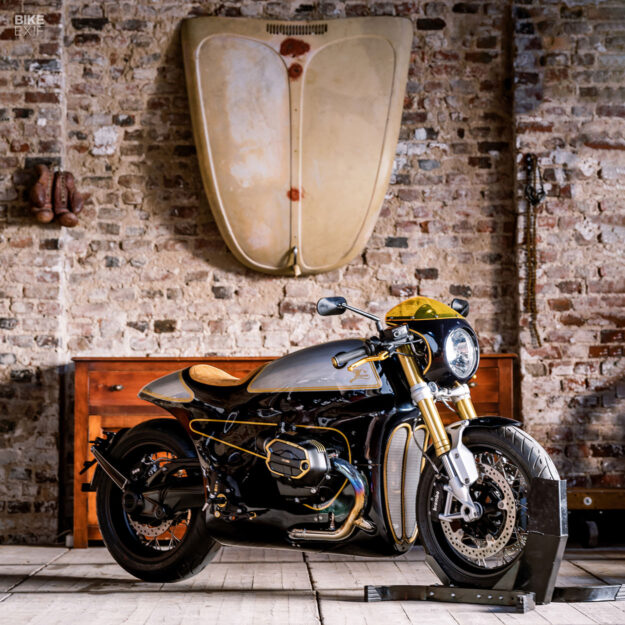 “He wanted an ‘Option 719’ [BMW’s own range of high-end bolt-on parts] 9T,” says Dirk, “and he thought of changing the seat and tank. However, this was not a challenge for me, and I felt it was too simple.”

“So I made a new appointment with the customer and we discussed the project all over again.” 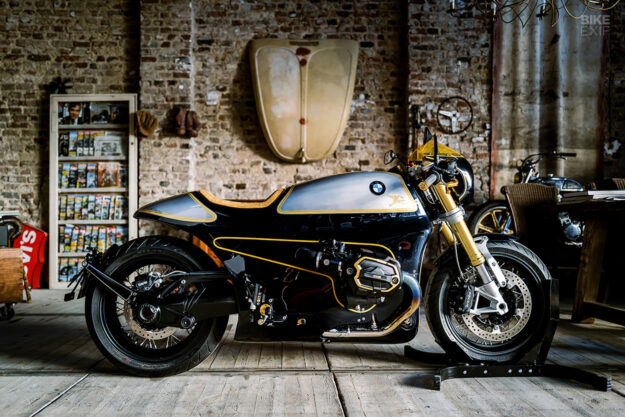 Dirk had something entirely unusual in mind—a new riff on the art deco style that he’s applied to everything from older boxers to the BMW R18. The client loved the concept, specifying only the color scheme, and that the name ‘Platon’ be added somewhere.

It was a huge trust exercise too, because Dirk hadn’t completely figured out the finished design yet. He’s rather analog in his methods, preferring to use basic sketches as a starting block, then adapting his design as he goes about shaping up the final forms. 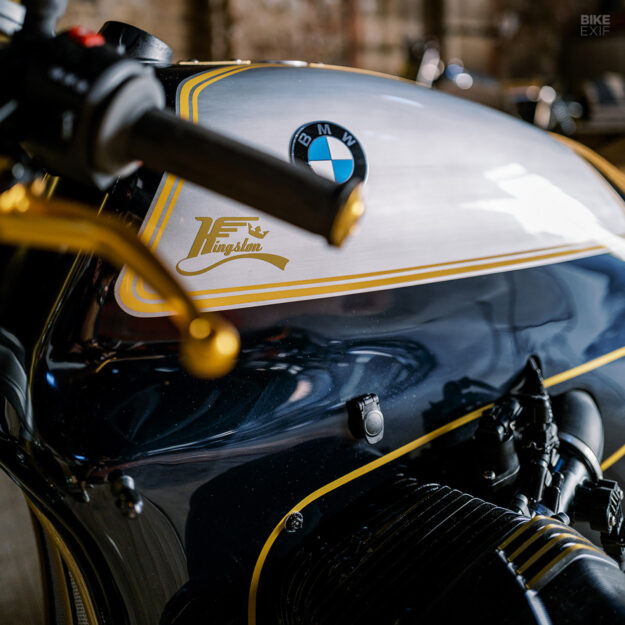 On this build, Dirk opted to leave most of the stock platform alone, and focus on the bodywork and accoutrements. Most of the R nineT’s running gear is more than adequate for nine out of 10 riders, so the client didn’t feel the need to splurge on upgrades. And since bits like the subframe can bolt straight off, there was no need to take an angle grinder to it either.

Once the bike was stripped down, Dirk started shaping his vision out of layers of foam. Then things turned digital; the shapes were 3D scanned and a mold was milled, so that Dirk could build the fully enclosed body out of fiberglass. 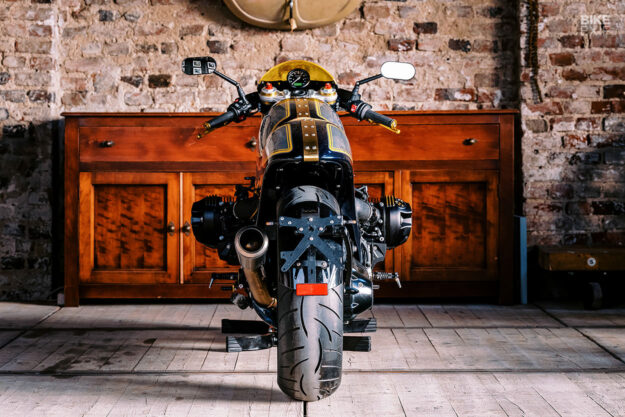 Dirk explains that there wasn’t any one source of inspiration here, but there are clear hints of classic BMW motorcycle and automobile design. The silhouette is part roadster and part café racer—and though it looks boxy from the side, it’s remarkably slim from the rider’s perspective, accentuating the boxer motor.

Fuel is stored in a 3 gallon reservoir mounted under the main body, shaped from aluminum with allowance for the OEM fuel pump. A brass ‘strap’ runs over the top of the bike, with leather upholstery on the seat to add some contrast. Peek around the front of the bike, and you’ll spot a pair of kidney grills in front of the engine. 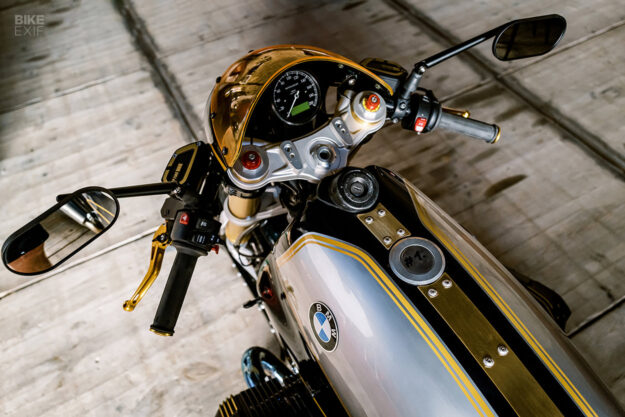 The nose fairing is another custom piece, and repurposes the original headlight. Behind it is a Motogadget speedo, and a pair of ABM clip-ons fitted with Shin Yo mirrors. The original ignition is still mounted in its stock location, with a pop-up gas cap sitting just behind it.

Out back is an aftermarket fender and plate holder, with a pair of Shin Yo taillights. The stubby exhaust muffler comes from the BMW boxer parts specialists, Unit Garage. 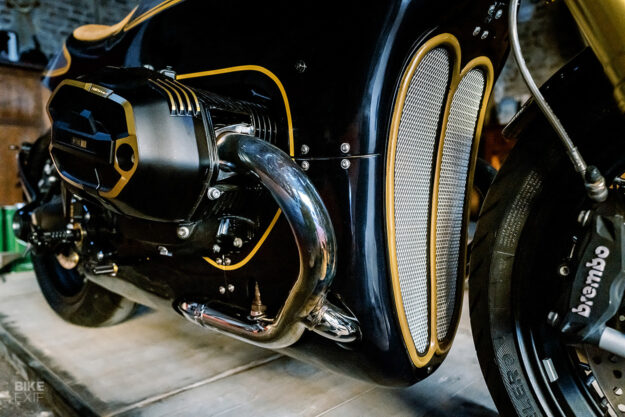 The client did manage to add some Option 719 touches in the end. Dirk used the exact same paints that BMW uses for their special order Option 719 R nineTs, wrapping his client’s bike in a luscious combination of metallic black, silver and gold.

The few Option 719 parts that were installed all match this livery. The include the engine valve covers and foot controls, and smaller bits, like the brake and clutch levers and reservoir caps. 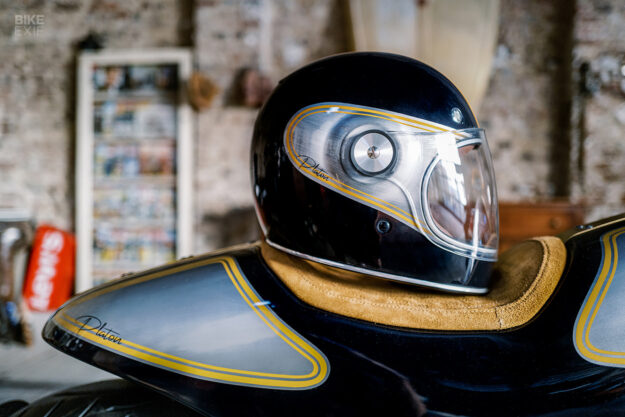 Once again Dirk has performed the magic trick of building a neo-retro BMW that looks like it was pulled from an alternate future. And if you simply must have one, there’s good news: he’s planning to build a limited run of nine of these. 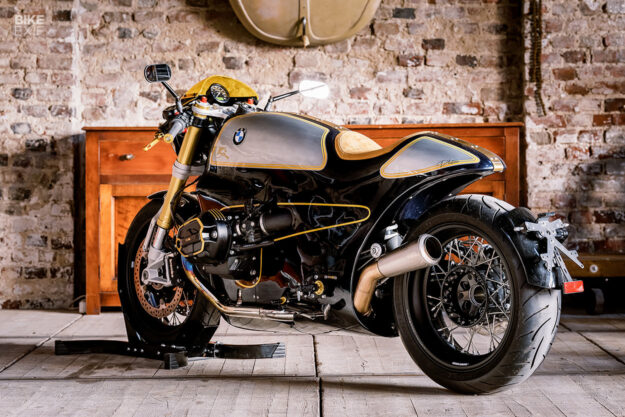