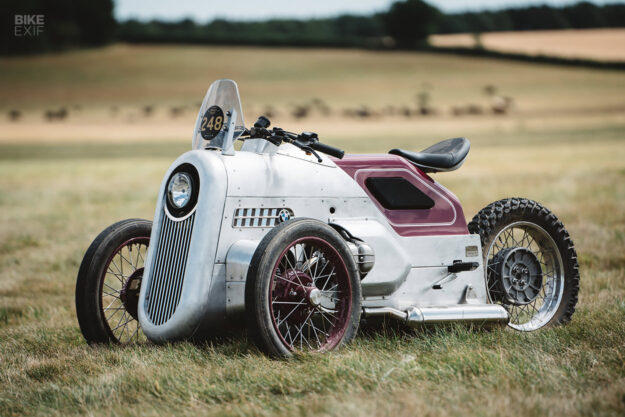 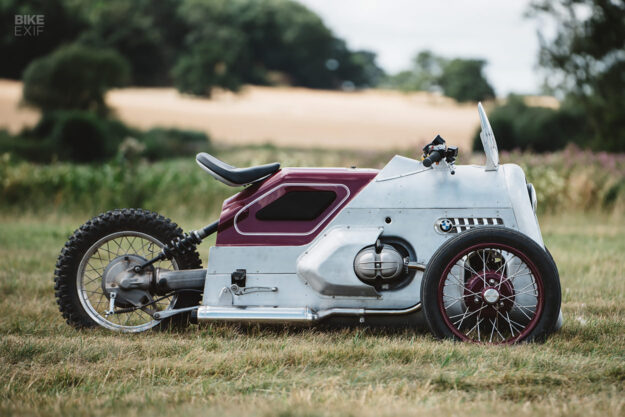 “The three-wheeler was inspired by pre-war racing cars, which I am a big fan of,” he tells us. “When I started this project back in 2012, Morgan had just released their new 3 Wheeler. But the main drive for this project, was that I wanted to try my hand at sheet aluminum fabrication.” 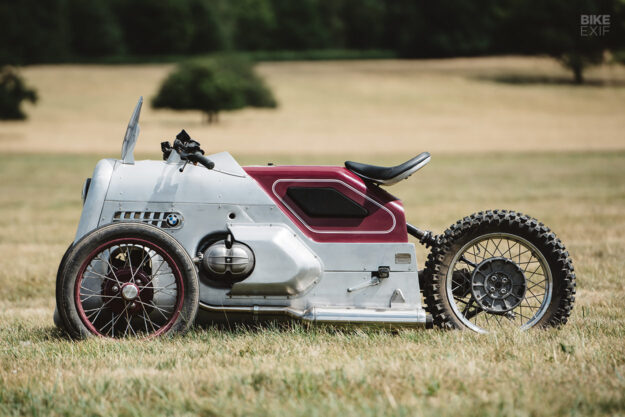 Underneath all that bodywork lies the bones of a 1993-model BMW R100R Mystic, mated to an ATV front end. And as you’d imagine, it took some engineering to get right. “The quad front end is made in square sections, and the BMW frame is round,” Tim explains.

Luckily both frames are similar in width, so the main job was to line them up. Tim started by fitting a pair of re-laced Austin 7 wheels up front, then he propped both ends up to line them up and gauge the wheelbase. Some deft TIG-welding work saw to the rest. 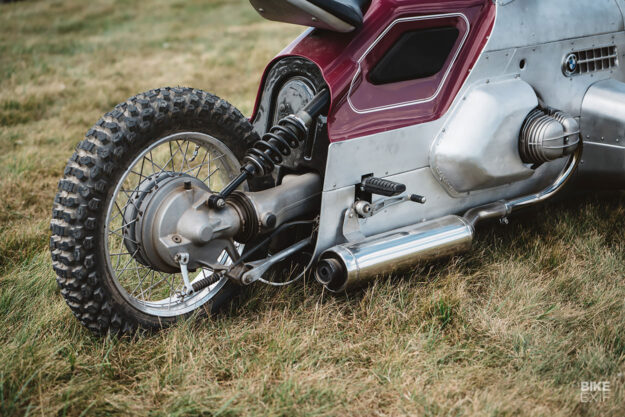 Most of the ATV’s front end is still intact, including its steering linkage, suspension arms and shocks (though Tim plans to upgrade these). The ATV’s disc brakes are in play too, while the rear rear end still uses the BMW’s drum brake and wheel. The rear shock is a Hagon unit that was already fitted to the donor bike.

The other modification that’s really well hidden, is the boxer motor’s new mounting position. Tim wanted to move it forward, so he fabricated new attachment points for the OEM through bolts to mount to. Then he built an extra linkage to transfer power to the stock driveshaft. 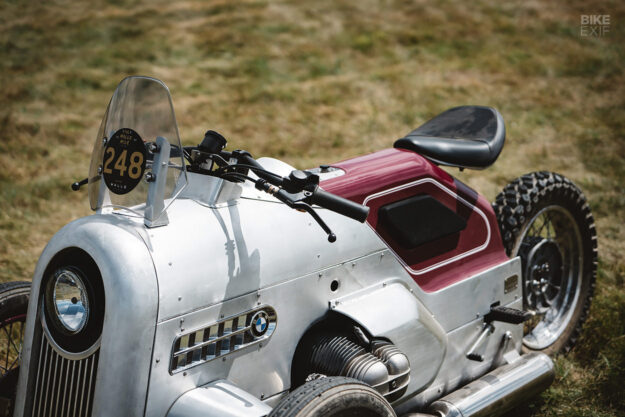 What is on full display, is the BMW’s exquisite bodywork. Tim had already produced multiple concept sketches of his three wheeler—so, once the chassis was complete, he started fine-tuning his ideas using CAD software.

Having a digital render was useful in more ways than one. First off, it allowed Tim to CNC-machine a one third scale model of his idea. Next, it helped him create wooden bucks to hammer out the panels on. 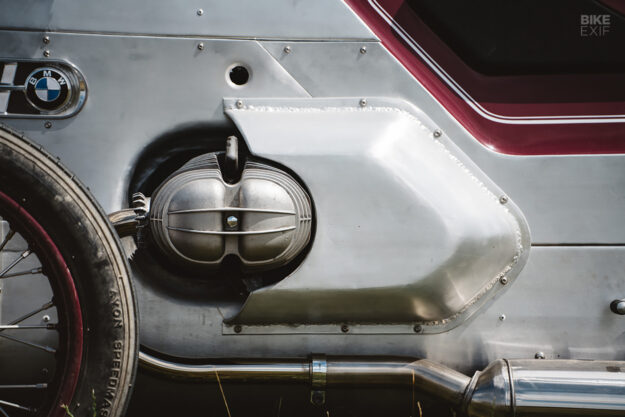 “This is my first sheet metal project,” says Tim, “so I designed the shape of the three wheeler to be mainly simple forms. Most of the body was made using a roller, while the front grill and side pods were hammered over MDF bucks, with a bit of English wheeling to smooth things up. The most tricky part was the rear section, which is made from around six parts.”

Tim also admits that he built the bike more for looks than practicality. Each panel bolts to an inner frame via a multitude of domed head screws. Which means that even the most basic of services could take a while. 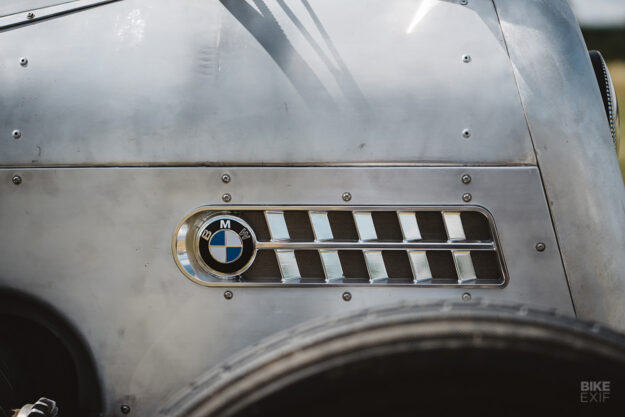 Setting the need to own a powered screwdriver aside, the bodywork is breathtaking, with hints of Star Wars vehicle design bleeding through. Tim’s added some elegant details too—like CNC-machined side gills that reference the iconic BMW 507.

Above the unmissable front grill sits a repurposed Kawasaki Versys windscreen, mounted on custom stays. Out back is the seat pad and upholstery from a Triumph Bobber, mounted on a handmade pan. In between are a plethora of tidy touches that show just how well-thought this machine is. 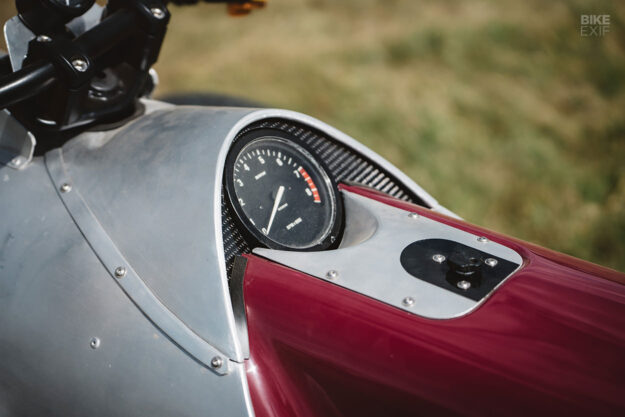 Up top, Tim’s retained original parts like the switches and tachometer, giving a vintage air to the bike. The tacho’s been remounted into a bulged dashboard on top of the tank, with the original BMW key sitting just below it. If you’re looking for the fuel cap, it’s between the handlebars and screen.

Other changes include a Daytona speedo, a Honda brake lever, and a full rewire with a Motogadget control box. Lower down are a set of Yamaha BT1100 silencers—but Tim only fitted those recently, because he took the bike to an event that had a noise limit. 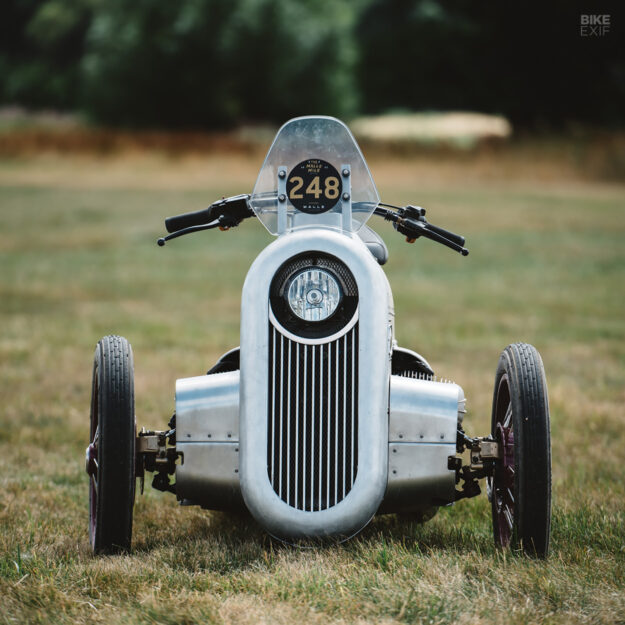 Tim calls this a shed build, but he’s unnecessarily modest—especially when you consider that he did everything on this project himself, save for the pin-striping. He’s also honest about the bike’s capabilities…

“Handling is odd at best,” he admits. “It will lift a wheel on cornering, so you need to move your weight towards the inside wheel when turning.” 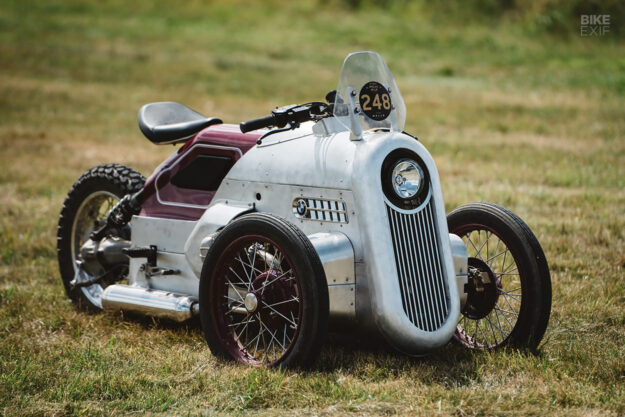 “I have a list of handling mods to try now. I think the seat needs lowering and handle bars rising a bit to make it easier to move around and see where you’re going, plus I’d like to try an anti-roll bar on the front.”

“Also some more practice would be useful.” 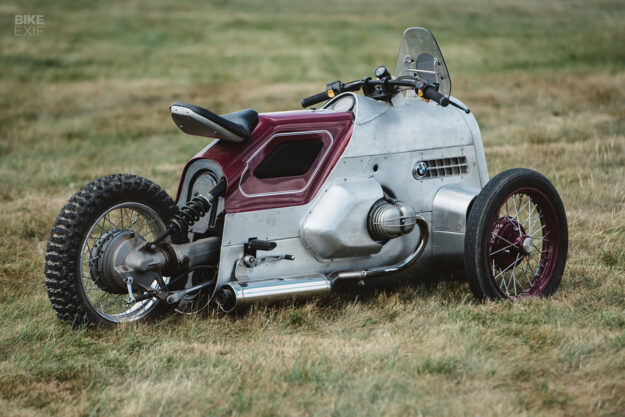