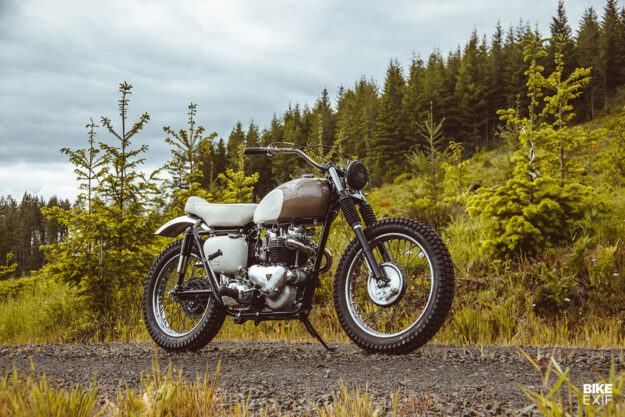 When you buy a new dirt bike, you expect the factory to offer you a stripped-down, light-as-can-be machine, ready to ride away. But in the early days of off-roading, this wasn’t the case.

Most dirt bikes were essentially road bikes that customers stripped down and lightened themselves, with no dedicated off-road steering or frame geometry. This 1956 Triumph TR6 ‘Desert Sled’ is a typical example—and that’s how Seth Neefus of Portland, Oregon likes it.

“I always dream about what a dirt bike or dual sport bike would look like if it rolled out of a factory back in the 1950s,” says Seth. “Just something simple and fun, with a little bit of style—to catch the eye of people when the motorcycle came roaring through the streets and off into the desert.”

As if building up a pre-unit Triumph from the 50s isn’t hard enough, Seth also started his desert sled project with nothing but a box of mismatched parts. 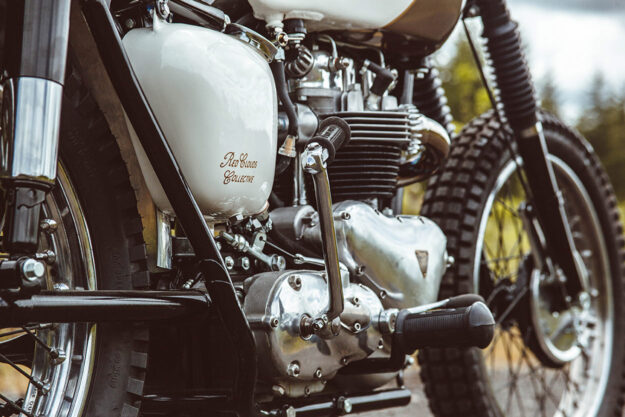 Luckily, the engine had already been rebuilt and the frame had a clean title so it could be registered for road use. Unluckily, Seth still had a lot of missing parts to find.

Seth rebuilt the forks with heavier springs and gave the wheels the same treatment, before wrapping them in trials-style tires. Like the ‘hare scramble’ bikes of yore, there is no front fender, speedometer or anything else that could break or weigh down the bike. However, there is a headlight—an old 6-volt Lucas that still has its original cover. 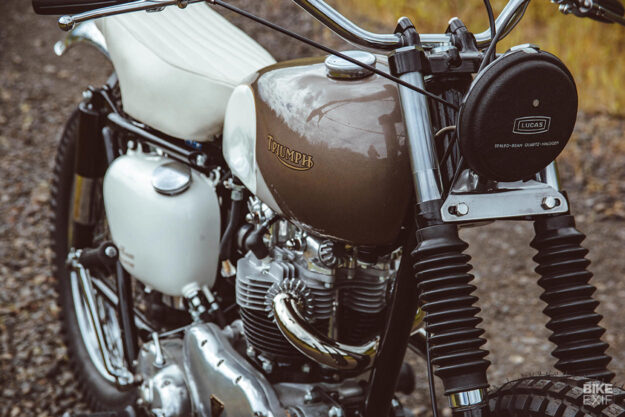 The frame, fork lowers and swingarm were powder-coated in gloss black, which pops nicely against the chrome of the new exhaust, engine covers and rear fender.

After finding an old, dented fuel tank, Seth painstakingly repaired it and got it ready for paint. “The paint design came naturally, and I knew I wanted to hand paint the pinstripe with one shot like they did back in the day,” he says. 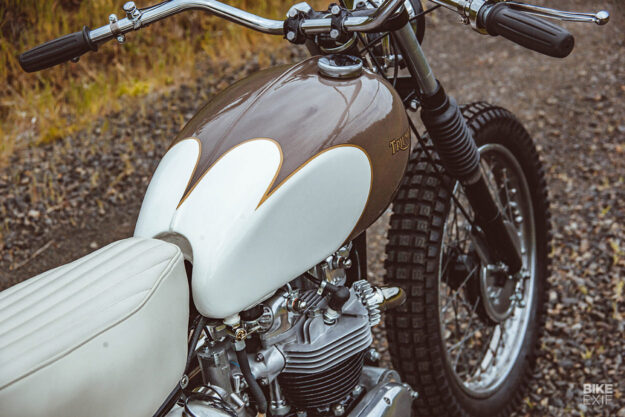 “The color combination is something I have been wanting to bring to life for a long time and it just felt like it was meant for this bike.”

While Seth was mulling over the tank, his brother Casey made a custom Bates-style desert sled seat. The Neefus brothers have been collecting Bates seats for some time, so they took design elements from several to create this custom unit. 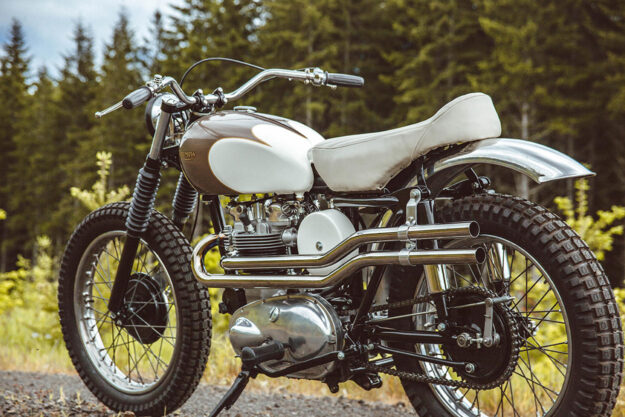 Seth and Casey own a company called Red Clouds Collective—a clothing and accessories brand that specialize in waxed canvas, selvedge denim and leather. This meant that Casey could also do the upholstery, a touch that Seth is quite fond of.

And they’re so proud of how the seat turned out, they are considering doing a small batch production run in the future. 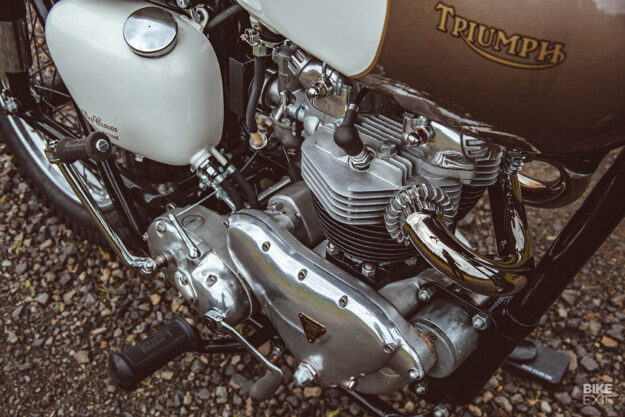 The previously rebuilt engine came fitted with a Bonneville T120 head, which is twin carb. But Seth wanted to simplify the Triumph as much as possible—especially in regards to the engine. So he’s opted to replace the T120 head with an original TR6 head.

Once back to a single carb setup, a brand-new Amal Premier concentric unit was married to the intake. Seth also found a Webco-style air filter and it too was slipped on, allowing the bike to run like brand new. 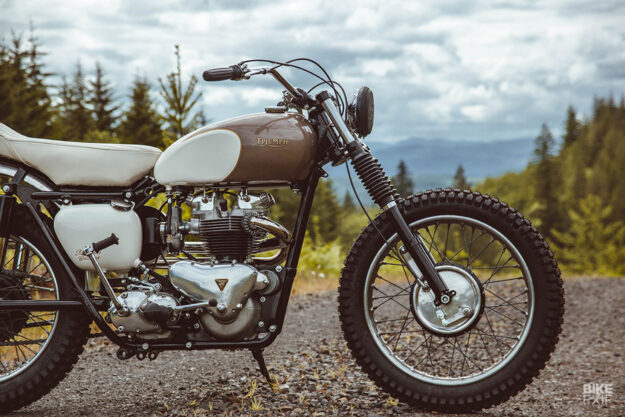 Gregg Poirer took care of the charging system by way of a new magneto and generator.

The timing and primary covers were polished to a shine, and the rocker box fins were shaved off to mimic the design found on other pre-unit Triumphs. The oil tank looks to be from an early Triumph, with Seth having to modify the mounting tabs to fit it onto the frame. The asymmetrical air filter/oil tank pairing are dressed up to match the gas tank, and sure look the part. 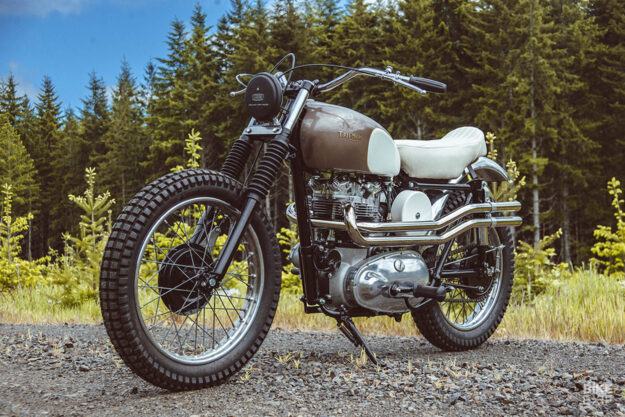 “This Triumph was made up from random boxes of forgotten parts, and swap meet scores,” says Seth. “Plus endless miles of driving around the northwest searching for 60-year-old parts that had been left to rust. But this bike gave those parts a new life, and I enjoyed every minute of it.”

The Neefus brothers finished the desert sled just in time for the One Moto Show, held in their Portland neighborhood. Then they headed a thousand miles south to California, for the recent Born Free Pre-Unit/All Desert Sled show. 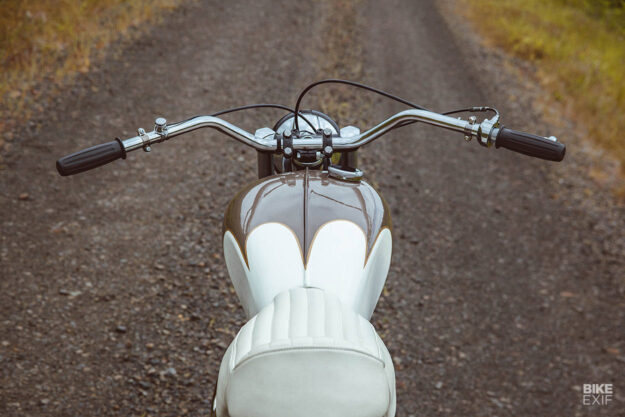 Right now, Seth and Casey have still got most of the riding season ahead of them in the USA. That’s not the case for most of us southern-hemisphere folks, but it’s builds like this that get us through a wet, cold winter’s day. 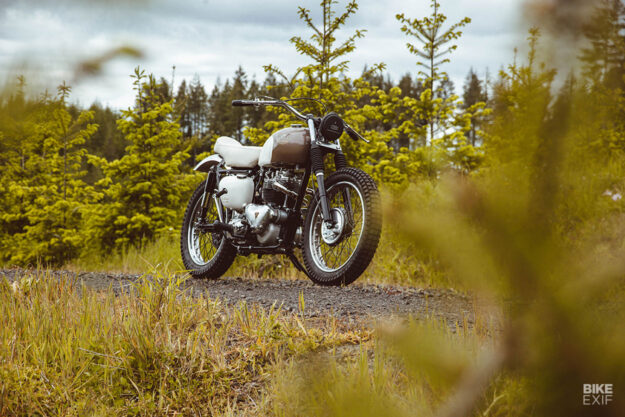