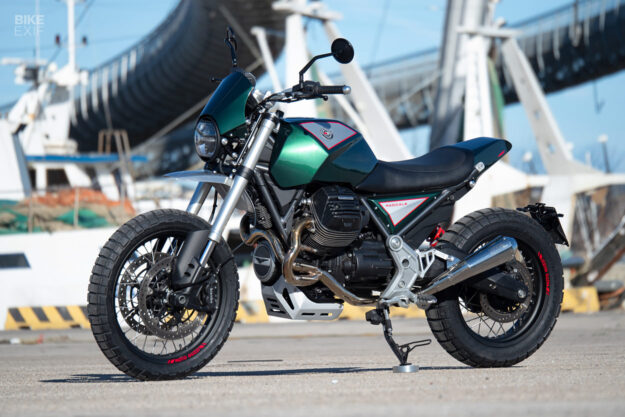 Moto Guzzi doesn’t make too much noise these days, but they do have some gems in their collection. One of these is the Moto Guzzi V85 TT. Sure, it’s not the most exhilarating adventure bike on the market—but it has oodles of character, and charming looks that set it apart.

Filippo Barbacane of the Italian workshop Officine Rossopuro is a fan, citing the V85 TT’s no frills design as its biggest drawcard. “It’s a motorcycle dedicated to touring, but without the pursuit of extreme technology and the growing need for horsepower that enthusiasts seem to have,” he says. “I am increasingly convinced that the most important characteristics of a versatile bike are lightness, drivability and simplicity.” 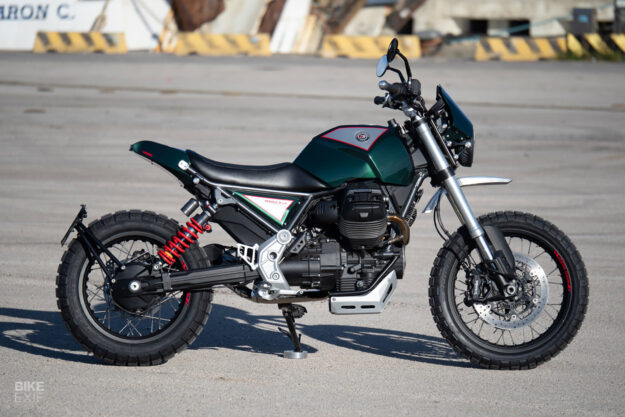 But as much as Filippo loves the stock V85 TT, he’s been itching to customize one for a long time. So by the time a client handed him a fresh donor to build a lightweight, go-anywhere scrambler with, he already had a head full of ideas. Luckily that was the full extent of the brief, leaving Filippo free to execute his vision.

“The first thing I did was to completely strip it of all its parts,” he explains, “discovering a frame that is really light, small, and almost made-to-order for building the sort of bike I had in mind.” 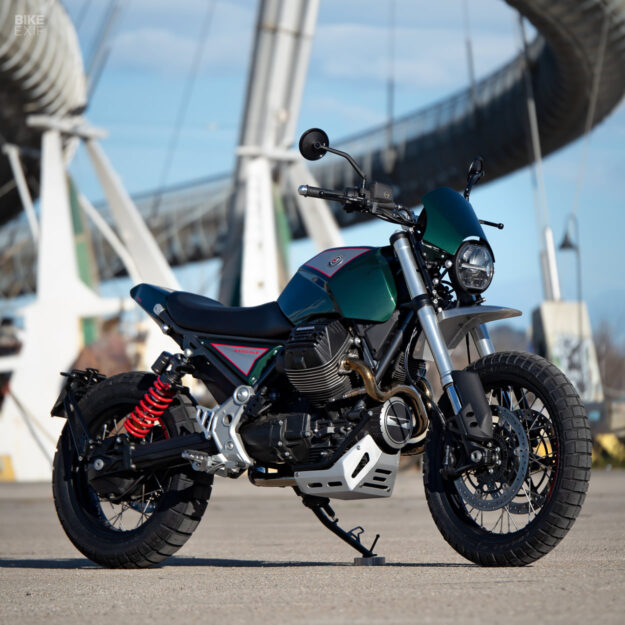 Despite the V85 TT’s throwback appeal, it is still a modern motorcycle. So Filippo’s first major challenge was navigating its complex wiring, so that he could perform seemingly simple tasks—like swapping out the lighting. Once he’d done his homework, he figured out a way to ‘trick’ the Moto Guzzi’s OEM control unit.

Once that box was ticked, Filippo could install a full complement of LED lights, including a Koso headlight, slim turn signals, and an embedded taillight. The headlight’s mounted on aftermarket brackets, and wrapped in an aluminum nacelle. Tucked behind it is the OEM dash, which Filippo describes as “functional and light.” 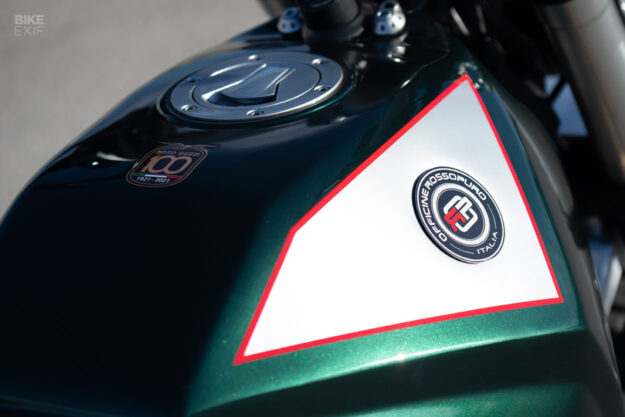 Next, Filippo redressed the Moto Guzzi in custom-made bodywork. He started by building a polystyrene model of the design, then shaped each part by hand out of aluminum. Unlike most modern dual-sports, there’s no plastic here.

The array of new parts includes a svelte, sculpted fuel tank, and an abbreviated rear cowl that caps off the end of the frame. The tank looks small, but it’s been built to tuck into the frame, maximizing capacity. Other changes include a high-mounted front fender, and sharp new side panels. 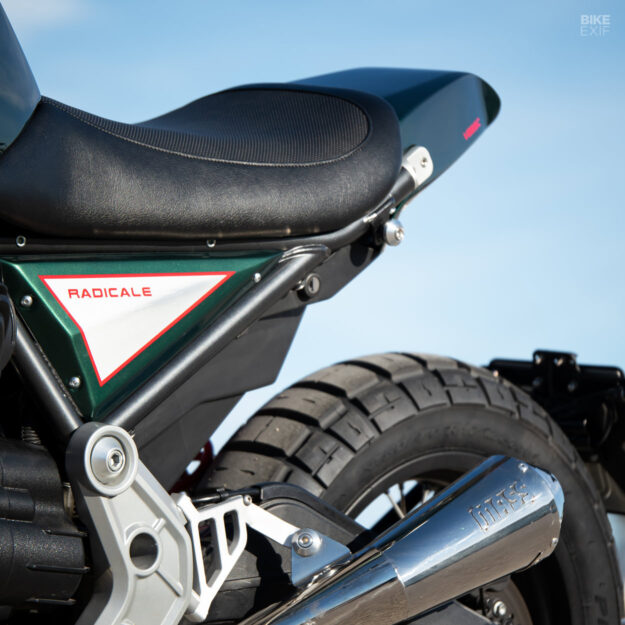 Being a fan of the stock frame’s appearance, Filippo opted not to hack it up too much. He simply shortened and tweaked the subframe’s rails, and machined a pair of heel plates to cover the passenger peg mounts. Mounted just in front of those are adjustable aluminum foot pegs.

This V85 TT has been designed for alone time, so Filippo added a synthetic leather seat for one, with a little extra wiggle room for comfort. 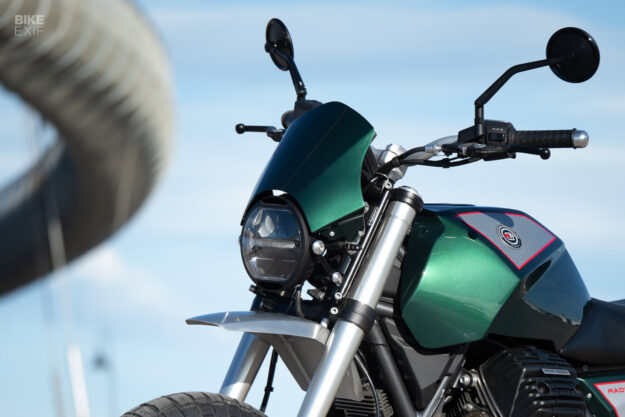 Officine Rossopuro’s client plans to use the Moto Guzzi more for everyday riding than touring, so Filippo tweaked the ergonomics too. The new bars and risers sit lower than before, making for a more aggressive rider triangle. LSL mirrors keep things tidy and practical at the same time.

Filippo also fabricated a burly bash plate for off-road excursions. Out back is a swingarm-mounted license plate holder, keeping the bike road legal without cluttering up the tail section. 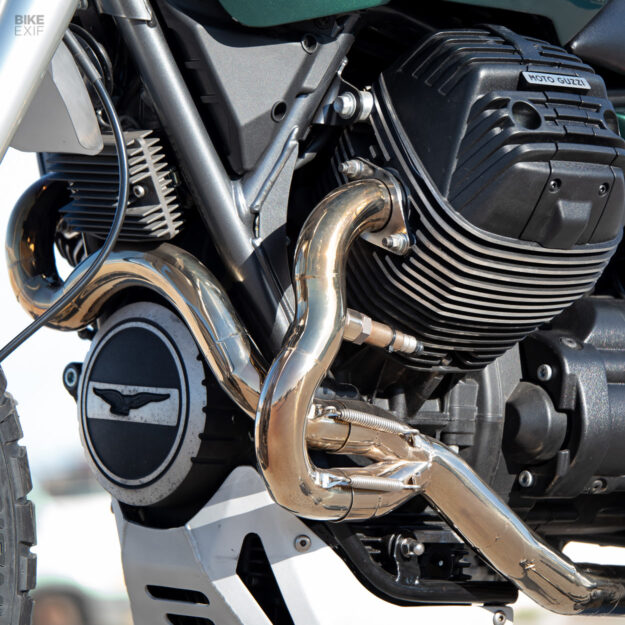 Final upgrades include new fork cartridges and a new rear shock, all from Bitubo. Filippo kept the 19F/17R spoked wheels and stock Brembo brakes, but threw a pair of Pirelli Scorpion Rally STR tires in the mix. The custom exhaust system comes from MASS, a frequent Rossopuro collaborator.

The V85 TT’s new livery is a more radicale riff on Moto Guzzi’s centenary color scheme from last year, with a little red thrown in for good measure. It works so well, that Filippo didn’t need to re-coat any of the bike’s hard parts to make everything harmonize. 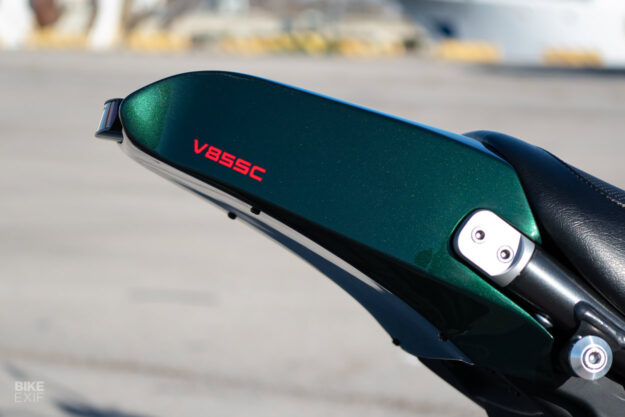 The real trick here is how effectively Filippo has reimagined the Guzzi, and its intended use. “It’s an expression of the total change of mind from the original V85 TT,” he says, “moving from a touring bike, to an agile bike designed for versatile everyday use.”

And, as most good customs do, it makes a strong case for the factory to release a similar machine. Agree? 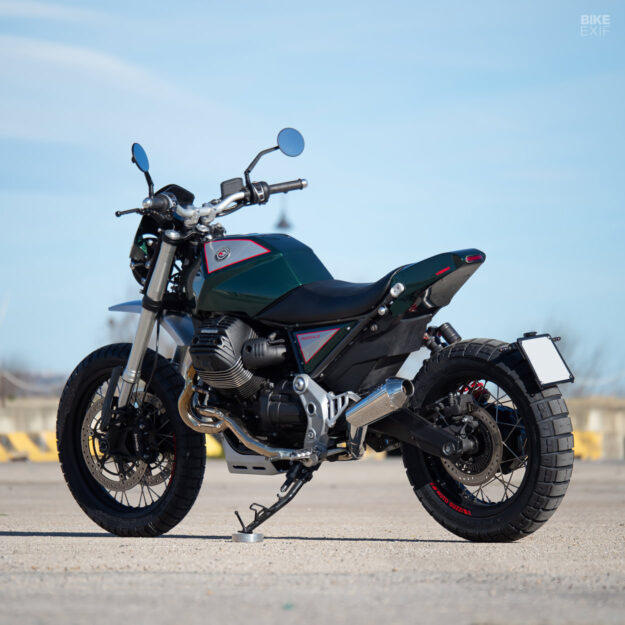