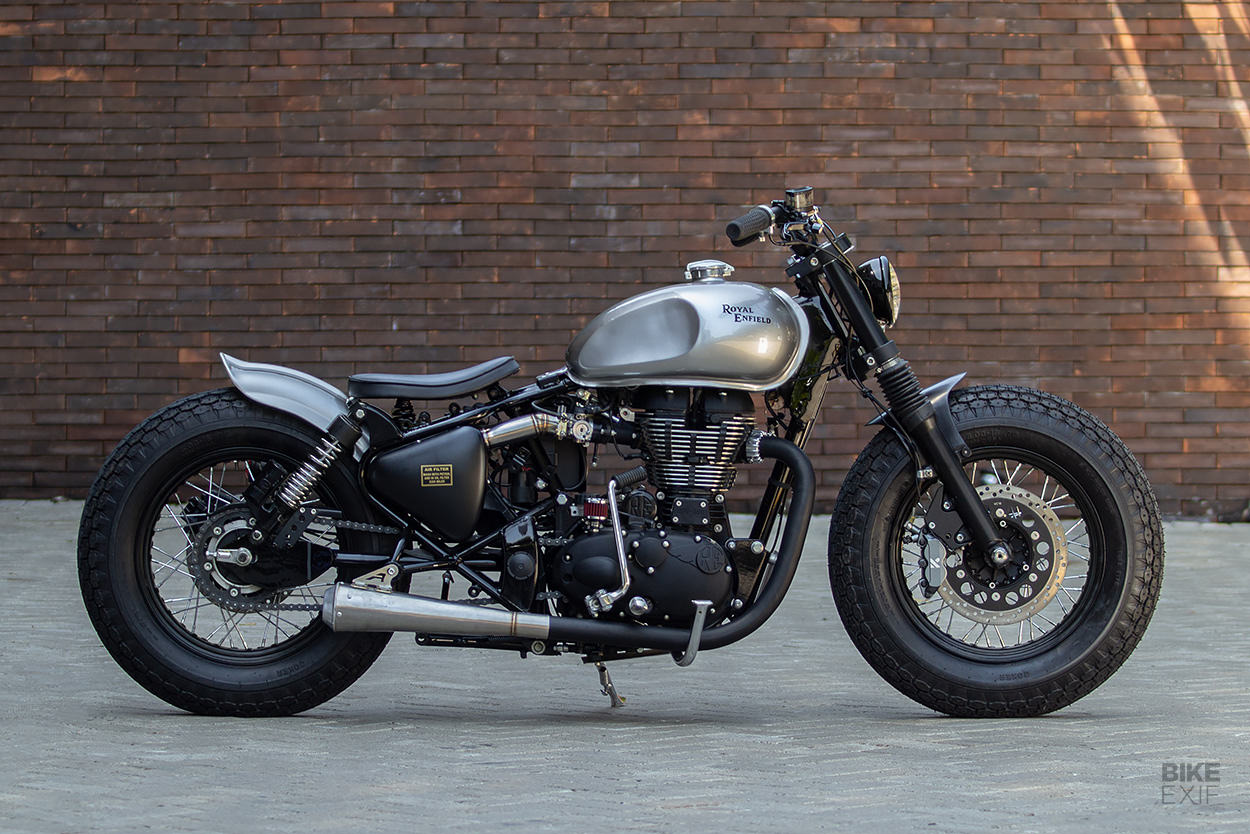 With Royal Enfield’s newer 650 twins hogging the spotlight lately, the company quietly discontinued their Bullet 500 and Classic 500 models last year. And that’s a huge shame. The venerable 499 cc singles have never been known for their performance—but they lured riders in with their simplicity, affordability and vintage looks.

As it turns out, the Classic 500 is also a pretty good starting point for a pared-down custom bobber. This one comes from FrontWheel Motors—a workshop in Bogor, just south of Jakarta in Indonesia’s West Java province. And despite its understated appearance, it’s sporting some pretty smart mods. 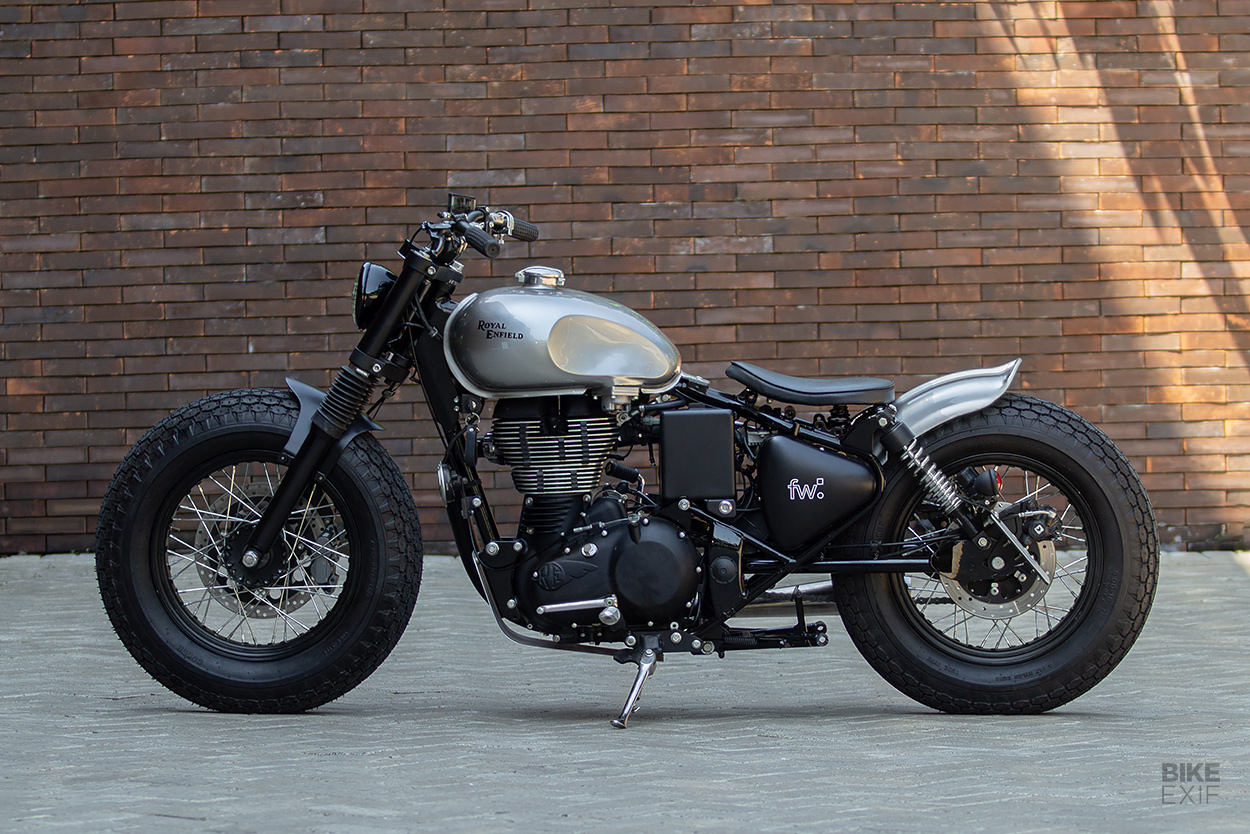 “A colleague came to me with a Classic 500, and gave me full authority over the changes made to the bike,” says shop boss, Chandra. “I was beyond excited to embrace that challenge and opportunity. The question that crossed my mind was: what kind of changes will make this bike an outstanding piece of engineering art?”

FrontWheel took inspiration from Japanese custom culture; “the always simple, yet always captivating look.” So they named the project ‘Raijin,’ after the Japanese god of thunder. 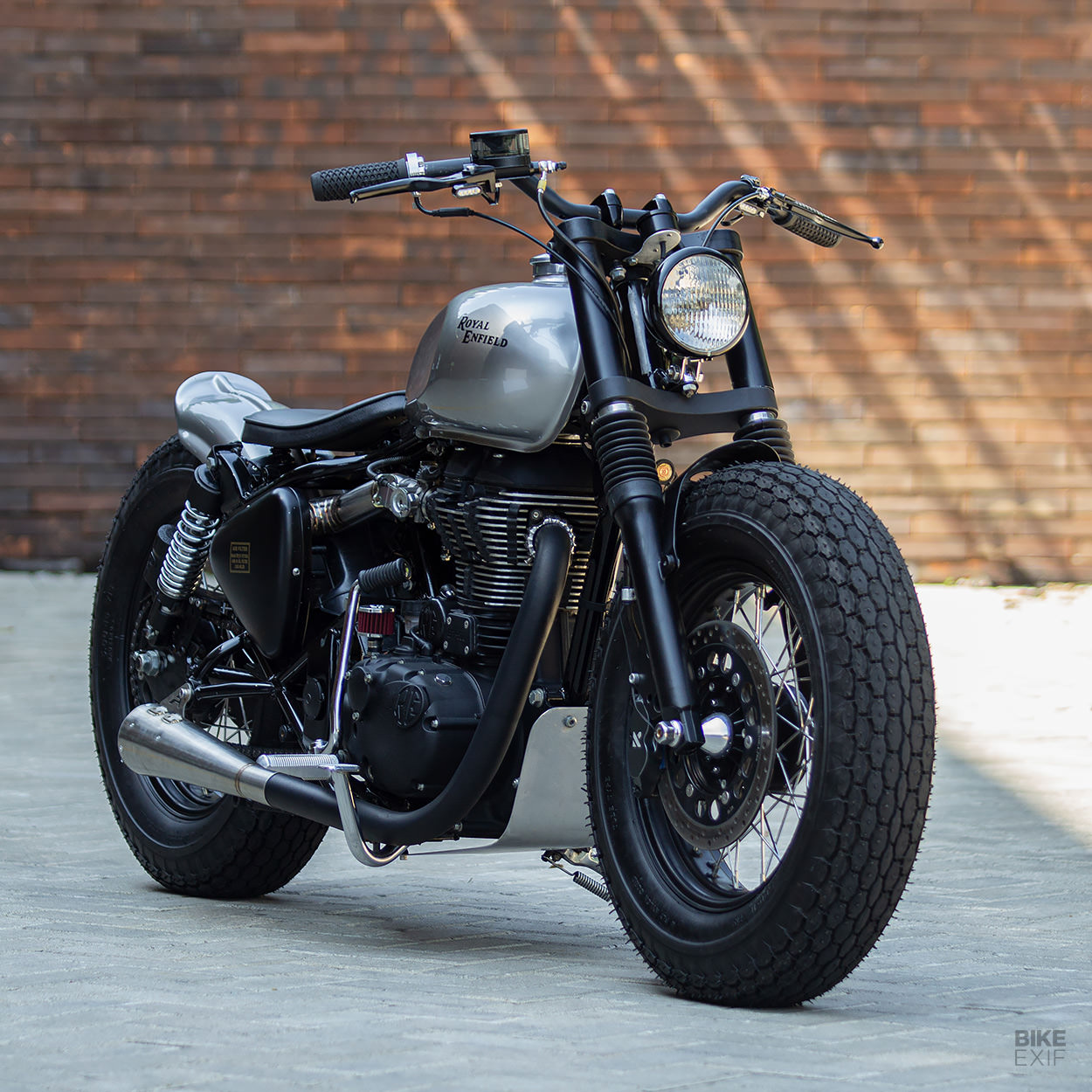 The most important task on the checklist was altering the Royal Enfield’s stance, to make it longer and lower. FrontWheel achieved this by altering the bike’s steering angle, and extending the swingarm. Then they added a set of custom yokes, to push the OEM forks wider and make room for chunkier wheels.

With that sorted, the team could ditch the stock 19F/18R hoops for a pair of 16” items, wrapped in 5” wide Coker tires. 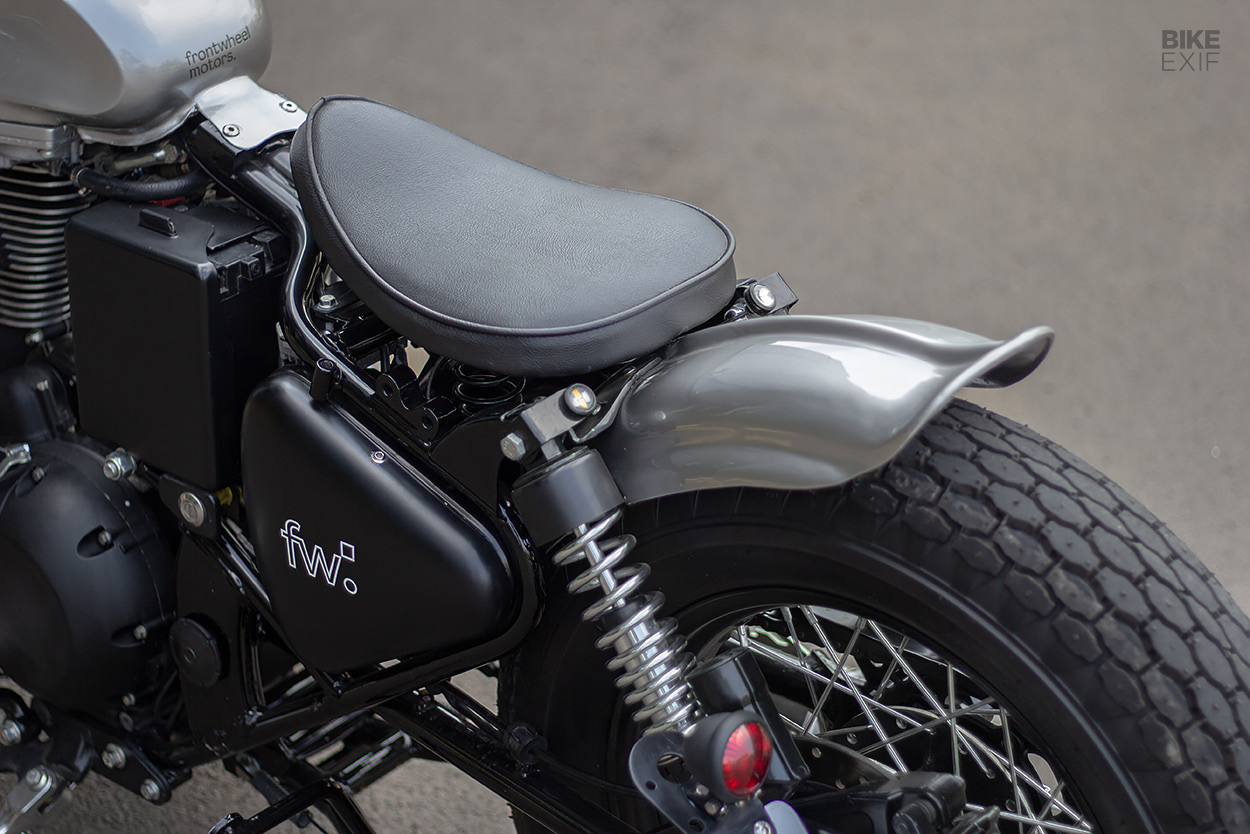 The Classic 500’s bodywork had a major overhaul too. FrontWheel massaged a pair of deep knee indents into the fuel tank, then added a Monza-style gas cap. Behind it is a slim, sprung bobber seat, followed by a stunning custom ducktail fender to finish off the tail end.

There’s some more trickery going on lower down. The crew repurposed the Royal Enfield’s onboard toolbox as a cover for a new air filter housing, linked up via a custom intake. And they swapped the elongated stock muffler for something neater, with a bark to live up to this build’s name. 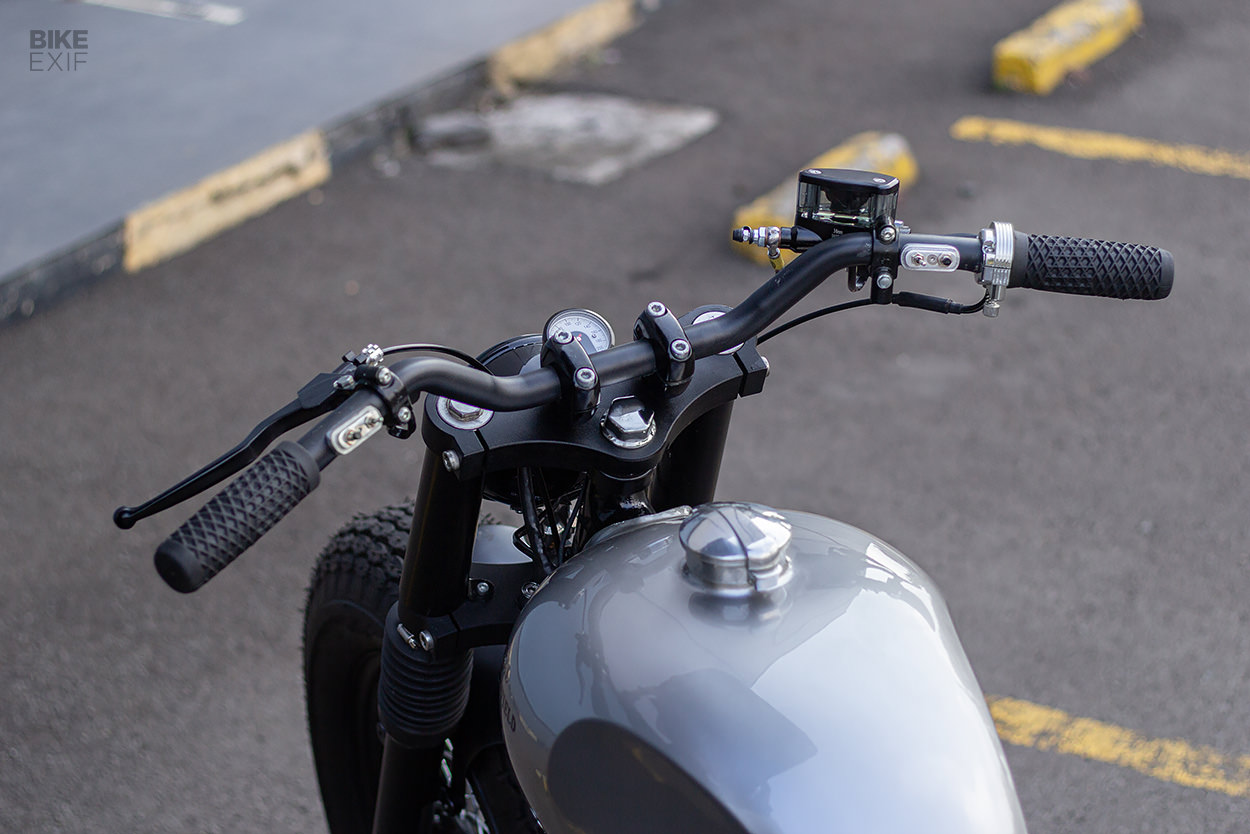 FrontWheel also installed a smaller headlight up front, and made a custom mount for a Motogadget speedo. Also present are new handlebars and grips, a new throttle, an upgraded brake fluid reservoir, and micro switches. And the ignition’s been relocated to the left of the bike, just below the tank.

The turn signals are particularly stealthy—they’re tiny LED units, mounted underneath the levers. 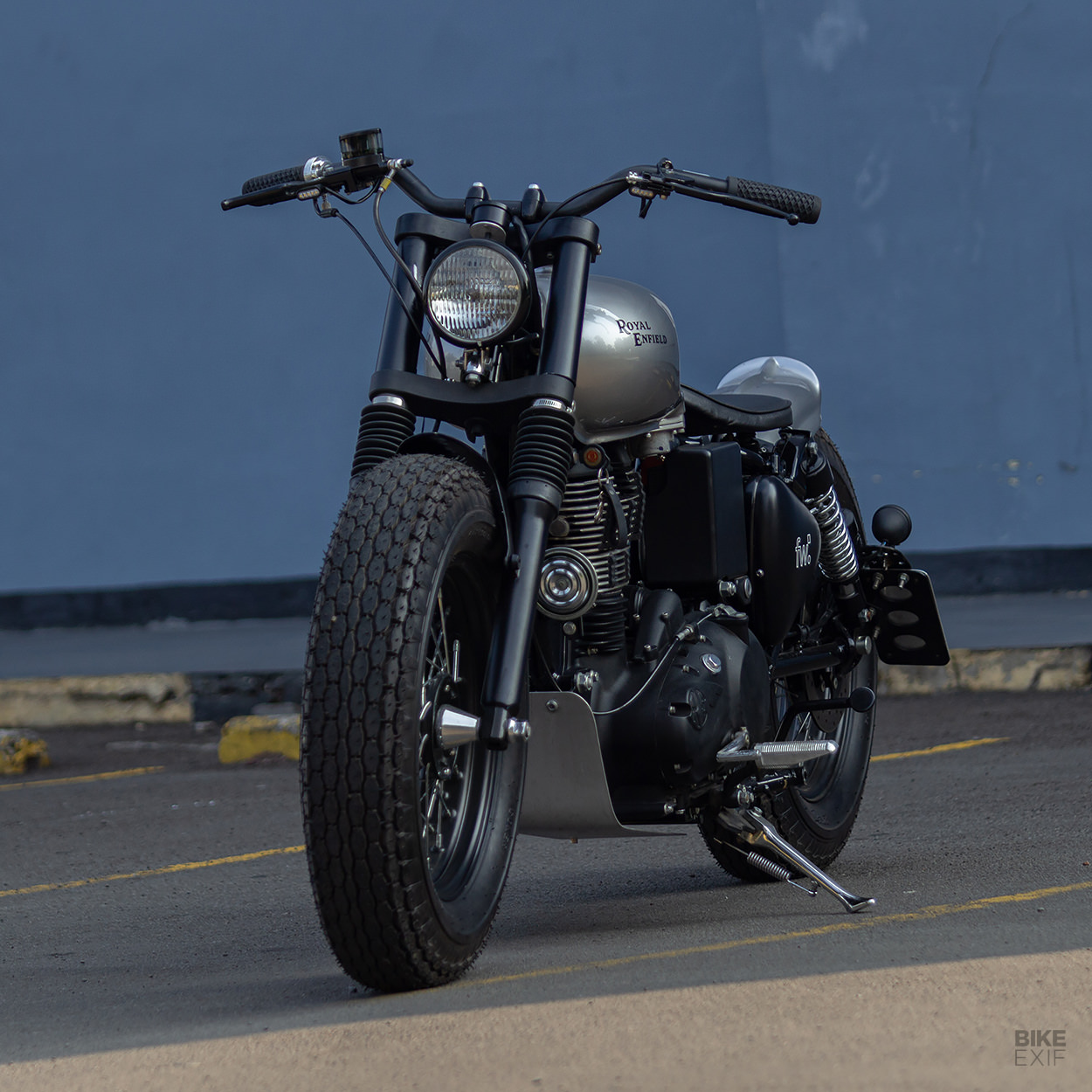 Lighting at the back is handled by tiny LED turn signals attached to the shock mounts, and a side-mounted taillight. FrontWheel also treated the Enfield to a custom skid plate, and new foot pegs.

Raijin’s finishes are deliberately monochromatic. Silver paint on the tank and rear fender is complemented by a host of black parts, giving this compact bobber an unassuming vibe. 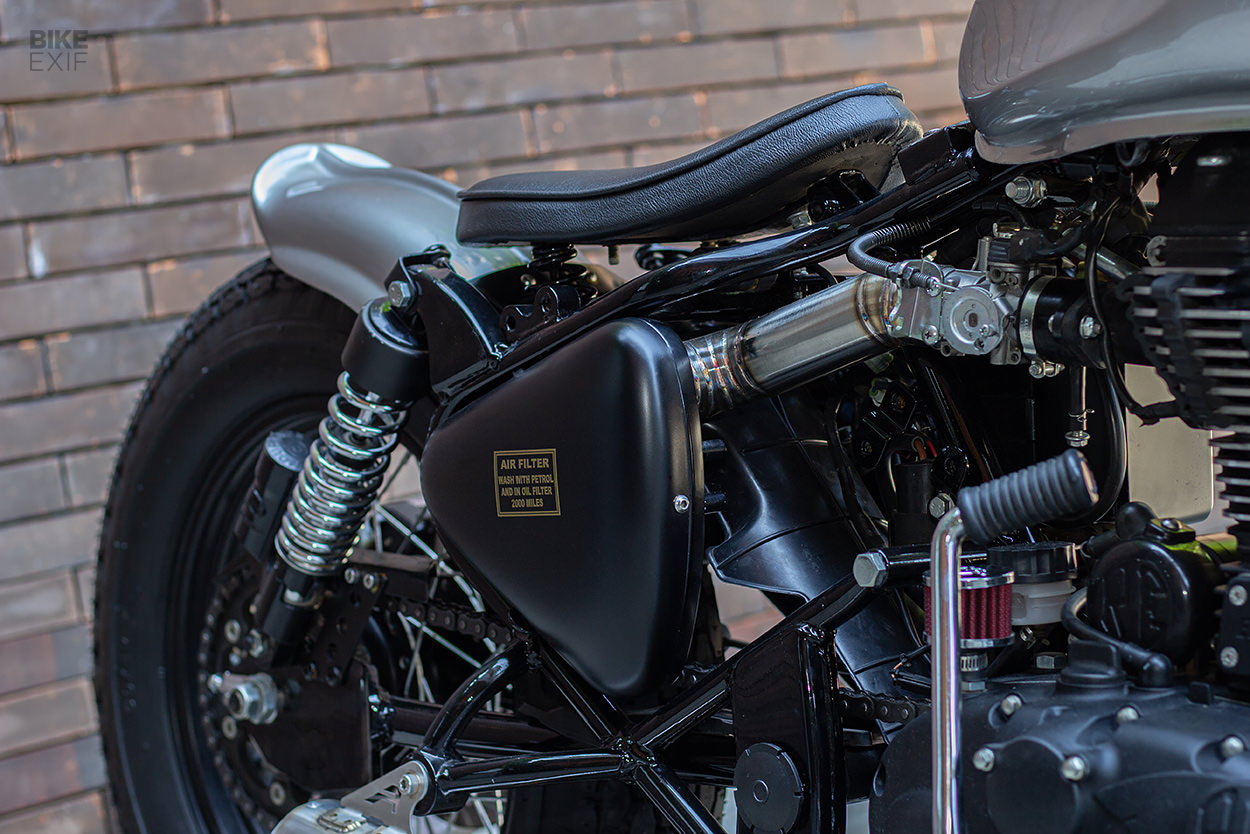 Royal Enfield might not be making the Classic 500 any more, but secondhand examples will be kicking around for years to come still. So there’s plenty of time to snatch one up, and build a tidy little café hopper like this. 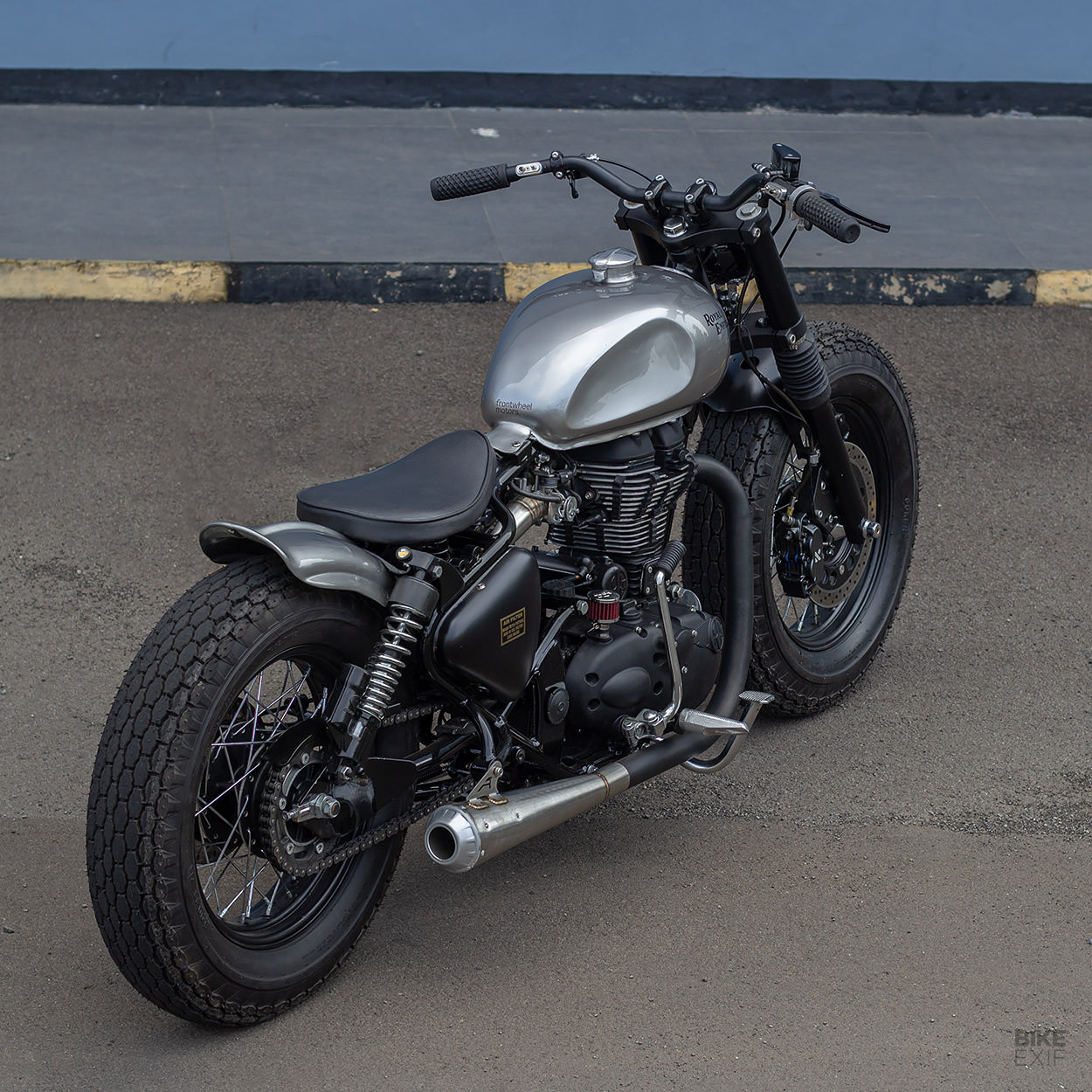