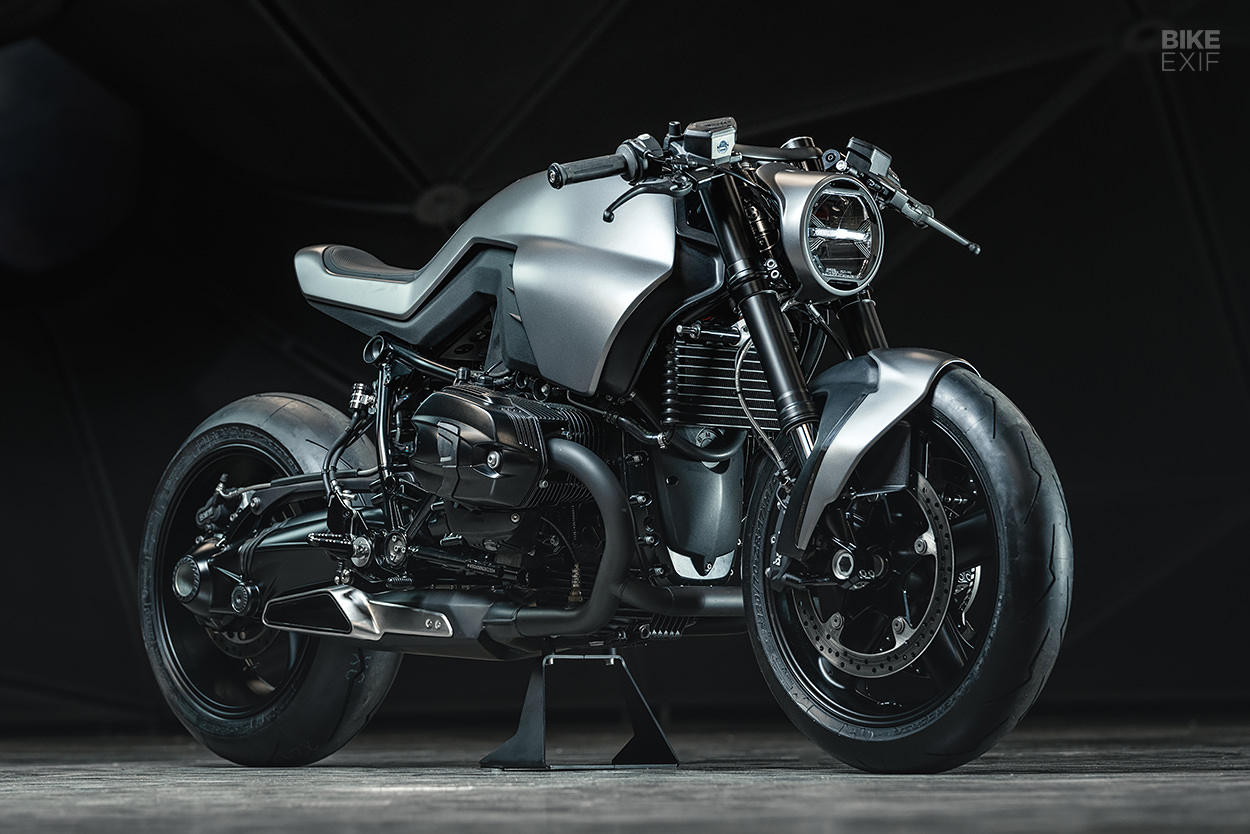 We’ve always admired custom motorcycle workshops that keep pushing the boundaries. Austria’s Vagabund Moto have been doing good work since day one, but they’ve never rested on their laurels. The founding duo of Paul Brauchart and Philipp Rabl seems to level up on every build, relentlessly experimenting with new designs, materials and processes.

Their 15th build pushes the envelope to the breaking point. It’s a 2016-model BMW R nineT with hand-formed metalwork, 3D-printed parts, and bodywork that opens via remote control. All because their client asked; “I would like to have the best motorcycle you’ve ever done.”

Vagabund used one of their previous builds as inspiration: ‘The Whale,’ a classic BMW R100R with a monocoque body that also lifted up. “It was about reinterpreting ‘The Whale’ with a new 9T,” explains Paul, “and giving it a more modern or futuristic look, consistent with this new motorcycle.”

“All the bodywork was crazy stupid. We hadn’t planned to do an opening system like ‘The Whale,’ because underneath the fuel tank it’s packed with ugly electrics and tech stuff. Stupid as we are, we finally decided to double the work by doing a full aluminum body with a fuel tank, and additionally doing a second mono body over it.” 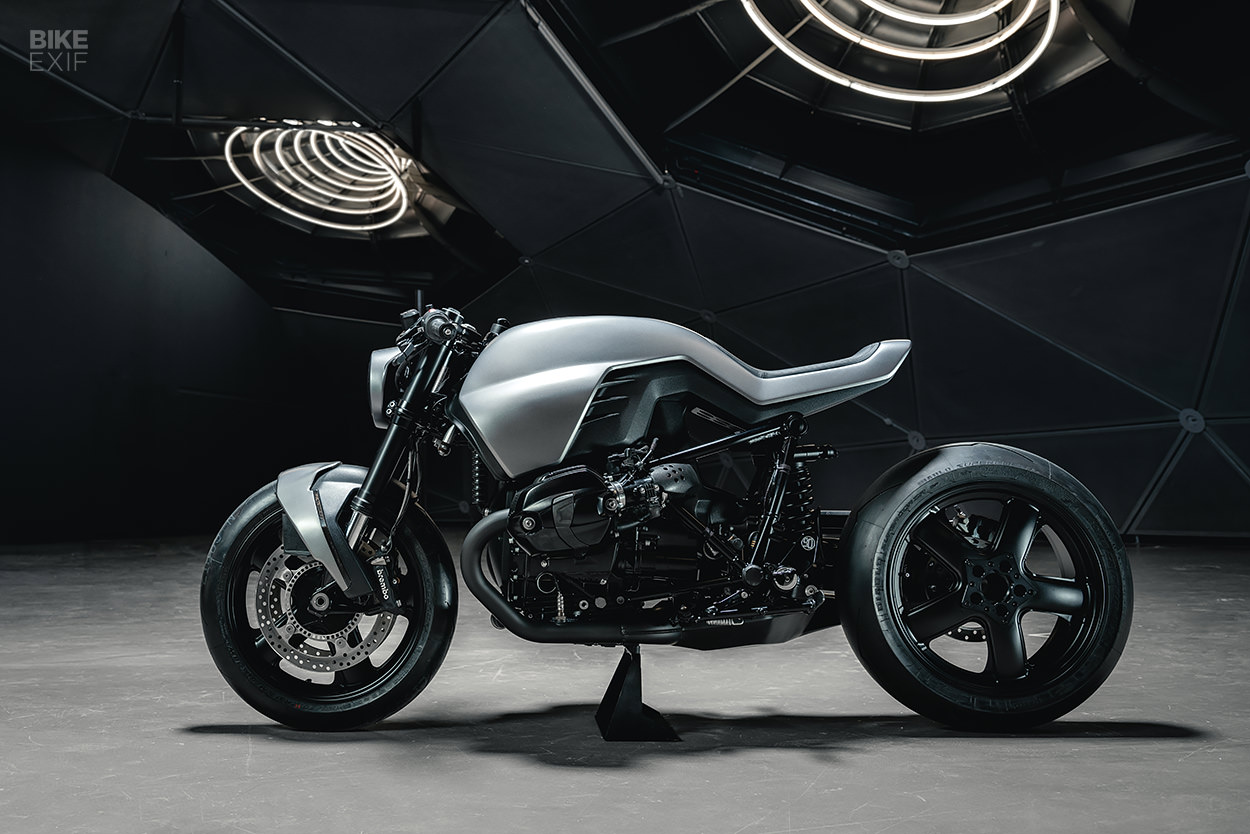 Given the level of metalwork needed for this job, Vagabund collaborated with one of the best in the business: the enigmatic craftsman Bernard Naumann, who works under the alias Blechmann. As a nod to Blechmann, they’ve even named the bike after the loose English translation of his handle: ‘Tin Man.’

Blechmann’s work on the nineT is extensive and mind blowing. The first thing that catches your eye is an outer layer of bodywork—a monocoque tank cover and seat unit. 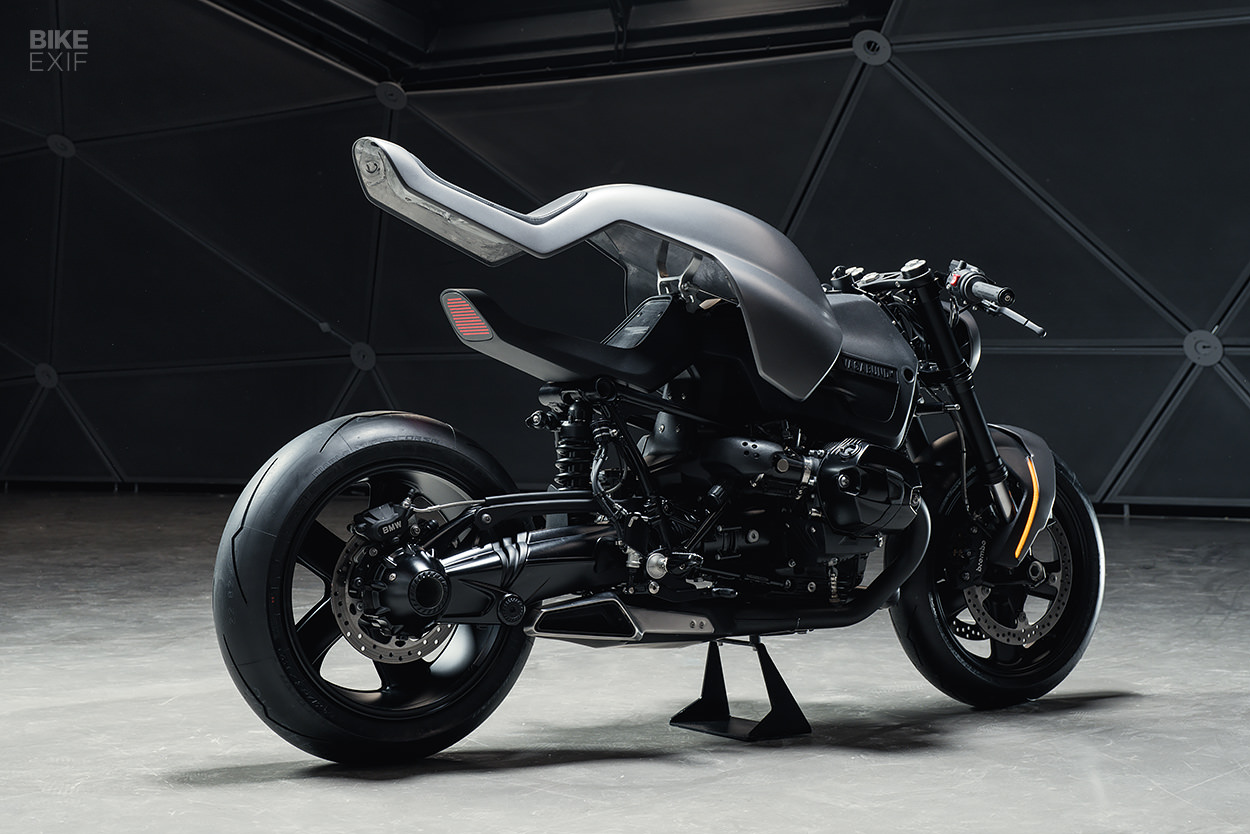 Underneath it is another monocoque part, this time combining the fuel tank with an under-seat storage area. A custom-built remote control triggers a latch, which releases the upper layer, which slides up and back on hydraulic shocks.

There’s a laundry list of custom goodness packed in there, starting with a Motogadget dash that’s visible through an acrylic window in the cover when the whole thing is closed, but lifts up on its own hinge when it’s open. There’s nothing off-the-shelf here: Vagabund designed everything from the aluminum hinges, to the 3D-printed housing for the remote, and everything sits atop a custom subframe. 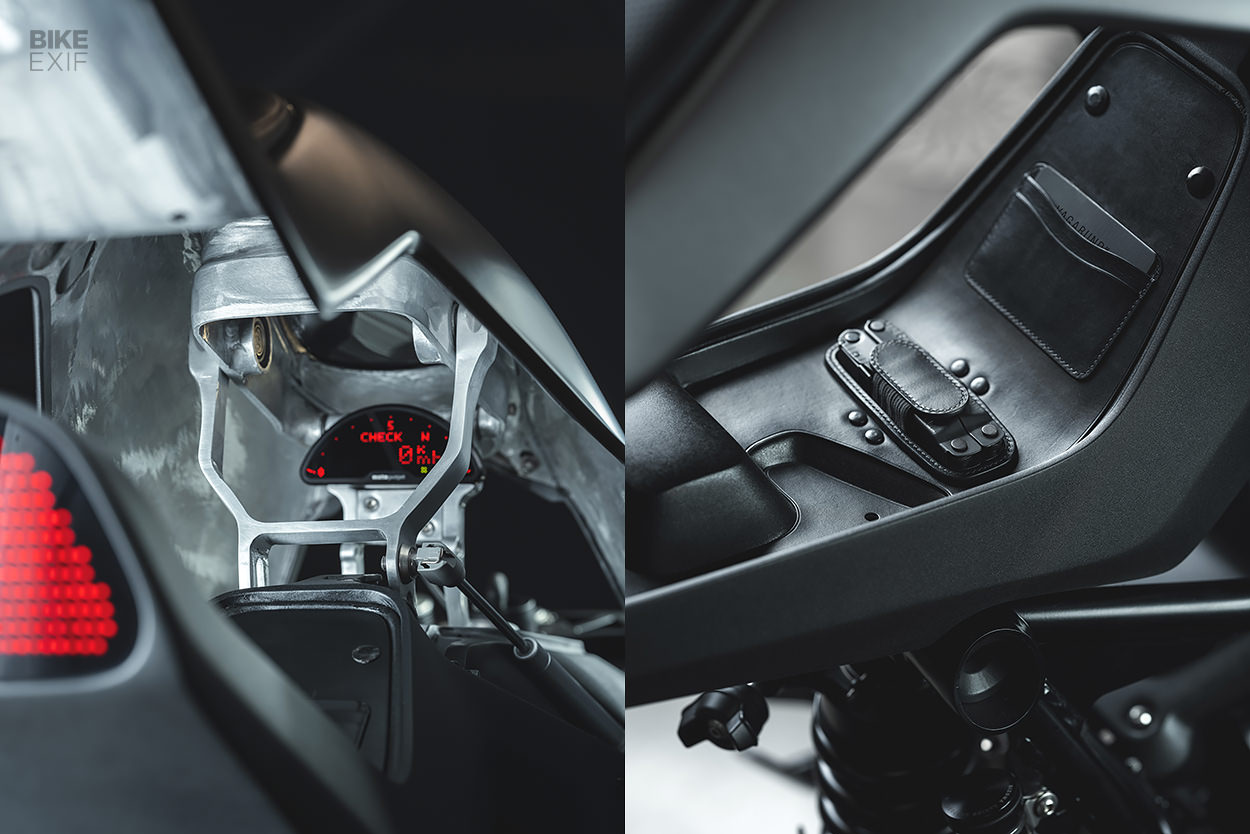 Extra touches include perforated leather on the seat, and a built-in credit card wallet and Leatherman pouch under it. All the upholstery was outsourced to the local leather specialist WerkDorf.

There’s a remarkable amount of OEM stuff still in play, mainly because the bike has to be street legal in Spain, where it’s headed. So Vagabund have integrated the stock key and fuel pump, moved the air filter into a custom aluminum air box, and packaged the electronics neatly inside the new bodywork. 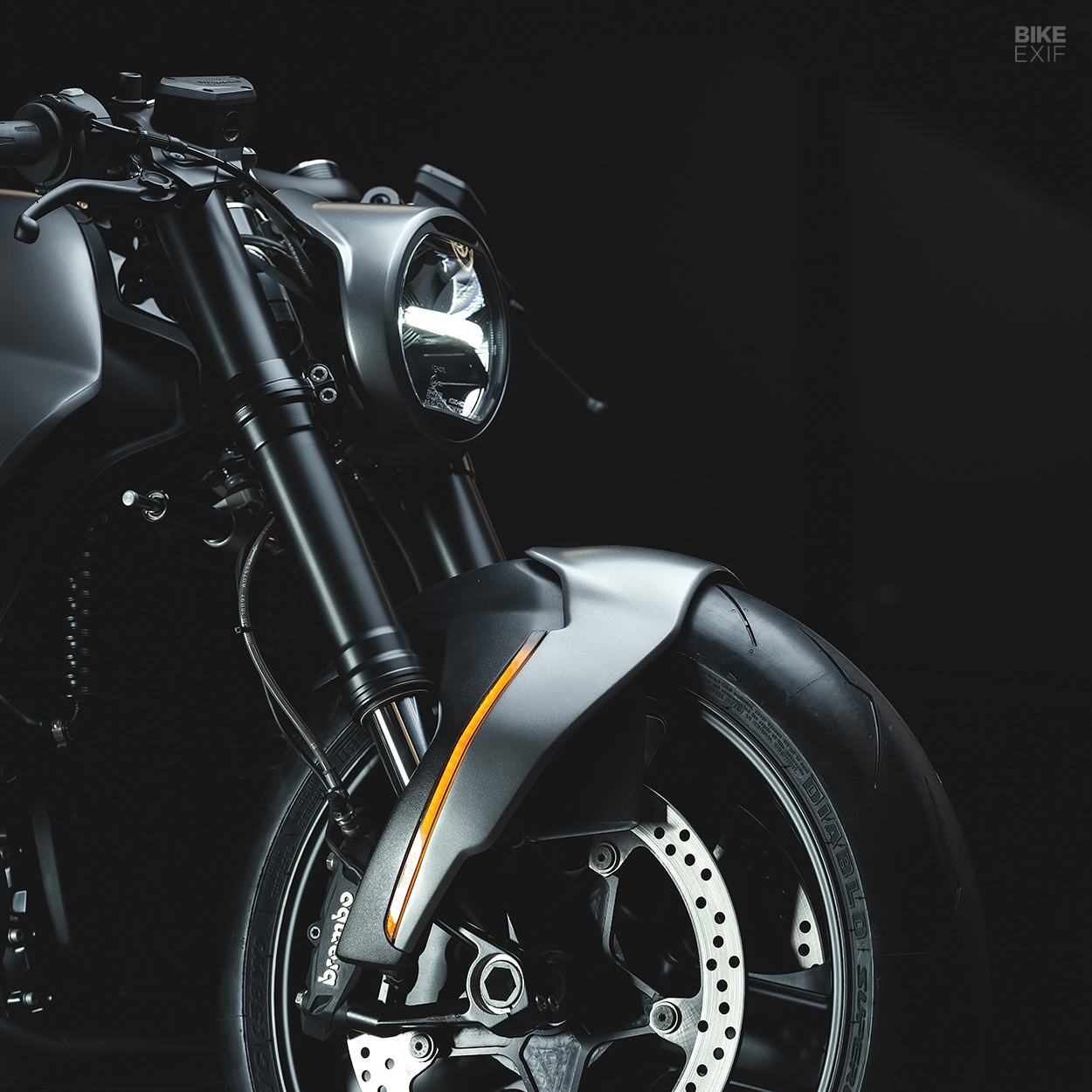 Blechmann shaped up the remaining bodywork for the nineT too, including the headlight nacelle and the organic-looking front fender. The nacelle wraps around a Koso Thunderbolt LED headlight, while the fender includes integrated automotive LED turn signals. Out back is a custom rear light, featuring an array of LEDs embedded in the tail. 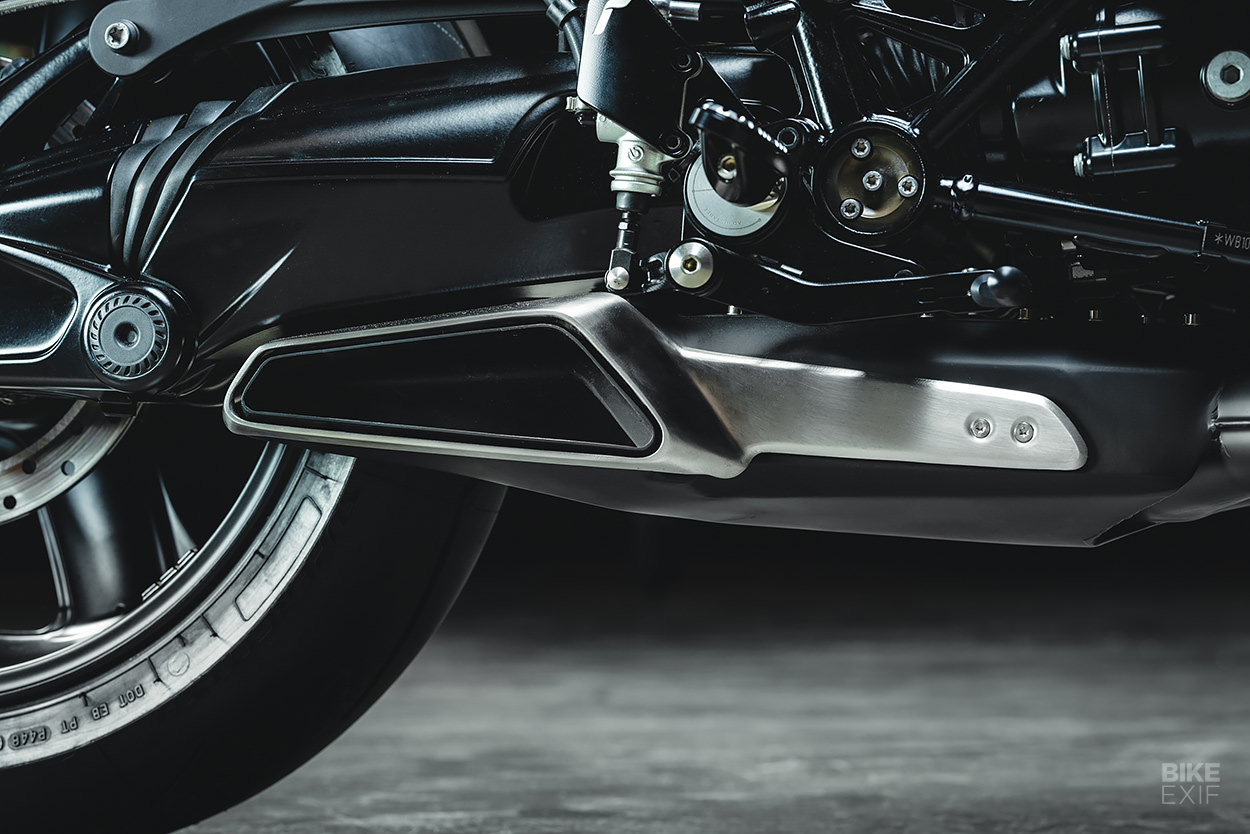 A custom ceramic-coated exhaust system rounds out the list of hand-made parts, complete with the original catalytic converter and a removable baffle. It exits to the lower right of the bike, surrounded by a stainless steel enclosure.

The custom work alone is enough to make your eyes water, but this R nineT is sporting a healthy dose of desirable bolt-on bits too. The wheels are full carbon hoops from Rotobox, wrapped in Pirelli Diablo Supercorsa SP tires. The top triple clamp is a CNC-machined part from Messner Moto, and the clip-ons, foot controls and rear plate holder are from Rizoma. 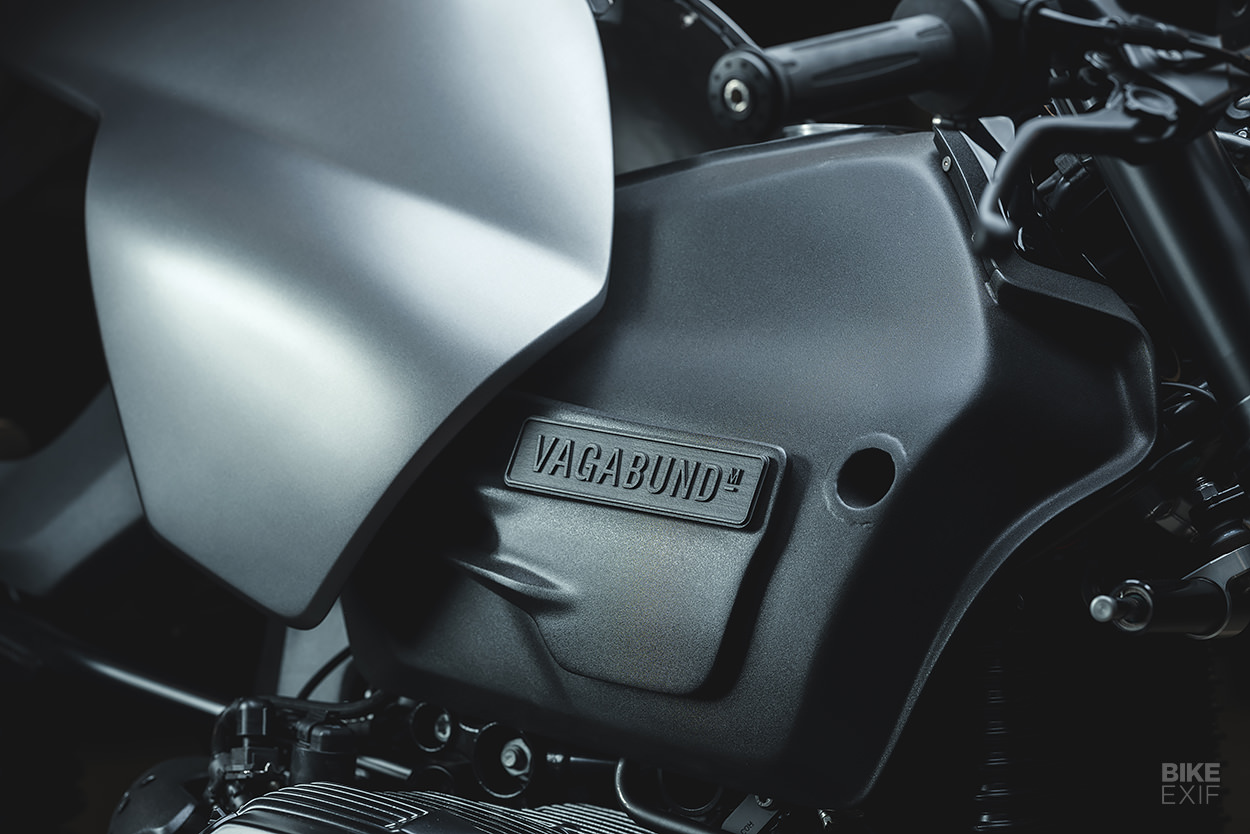 Vagabund kept the final livery on ‘Tin Man’ dead simple. The outer layer of bodywork was wrapped in a Mercedes ‘Selenite Grey Magno’ by the paint shop Grundmann, but the inner layer was simply clear coated, to emphasize the work done. (The same two-tone effect was carried to the front fender).

Finishing things off are anodized fork tubes, an endless list of black powder-coated parts, and a pair of 3D-printed emblems on the inner fuel tank. 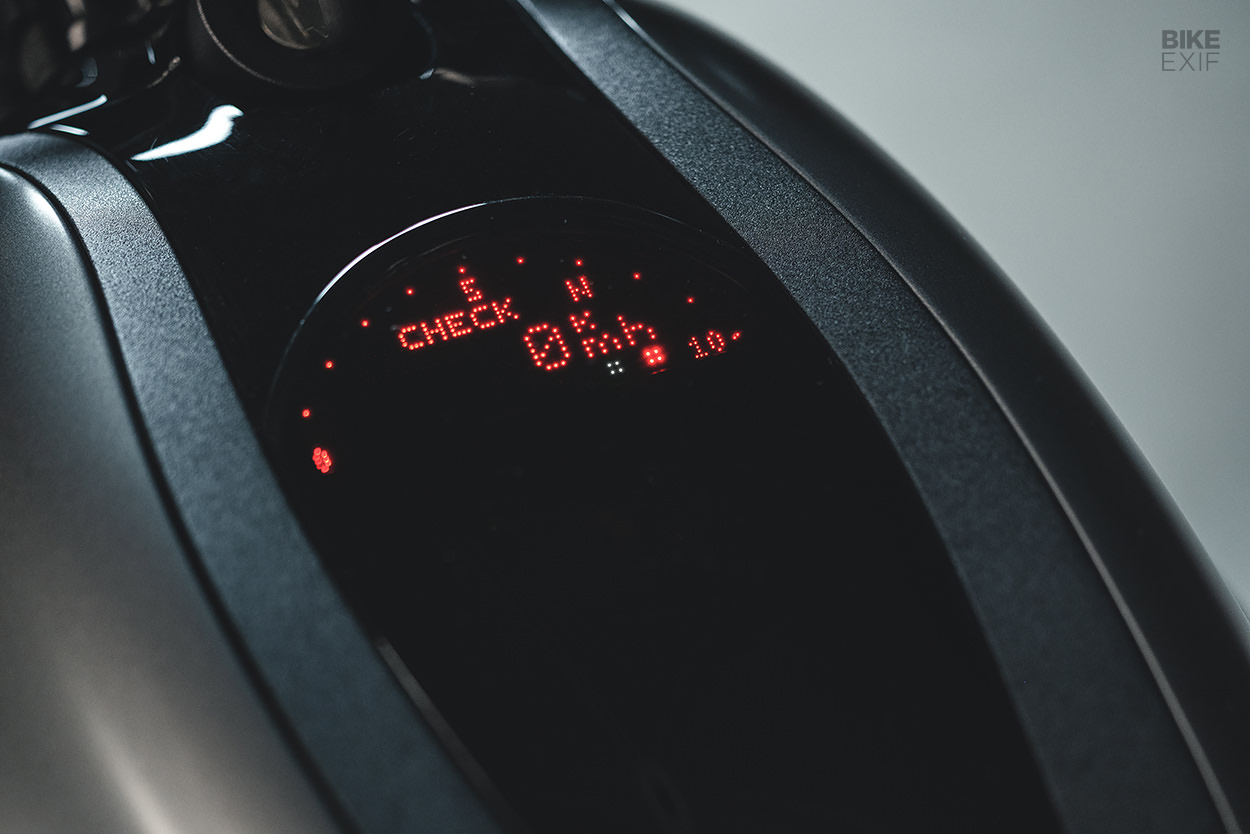 Paul and Philipp were tasked with building their best bike ever, and there’s no question that they rose to the challenge. If this is what Vagabund are already producing on their 15th build, imagine what they’ll be doing on their 30th.

As always, we’ll be watching. 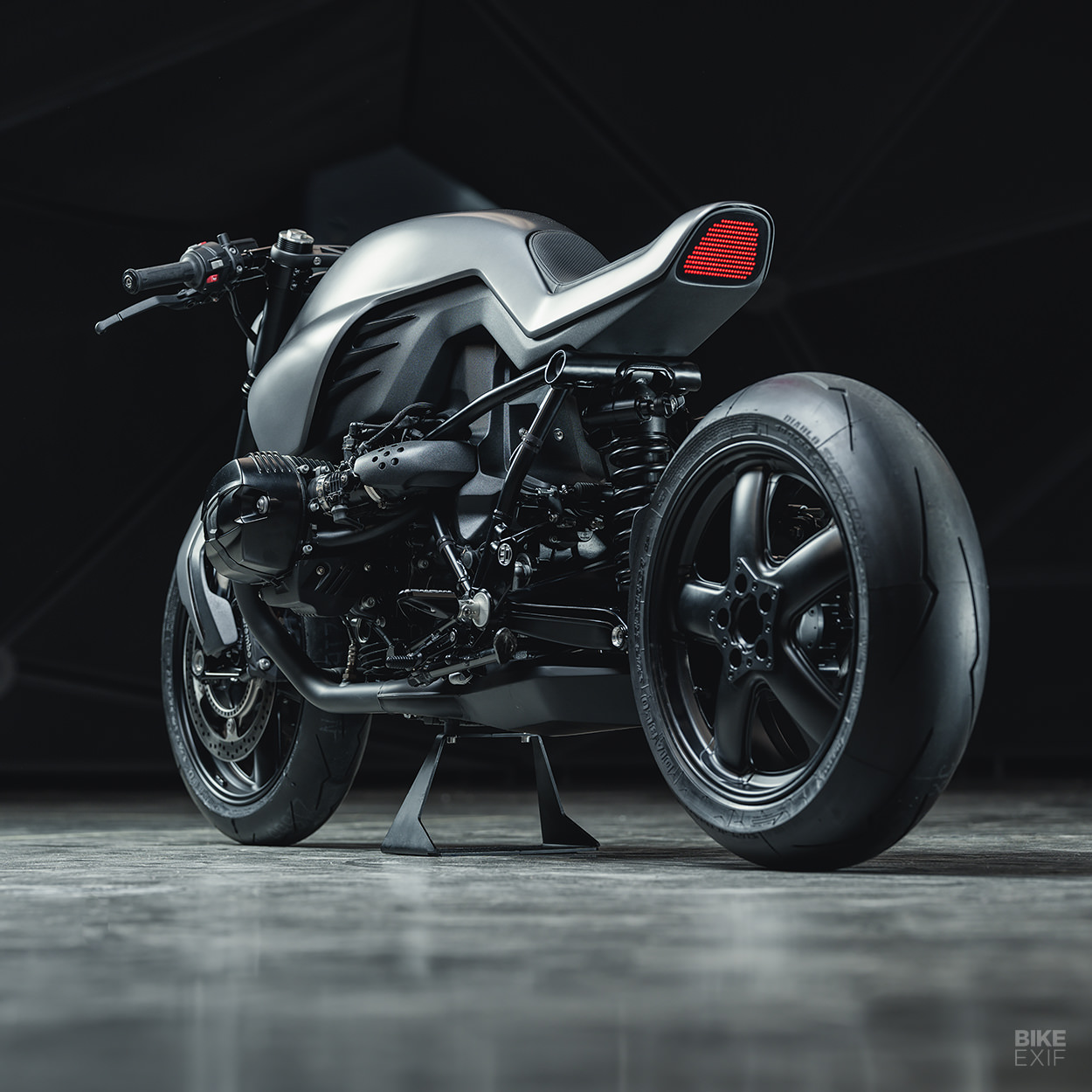