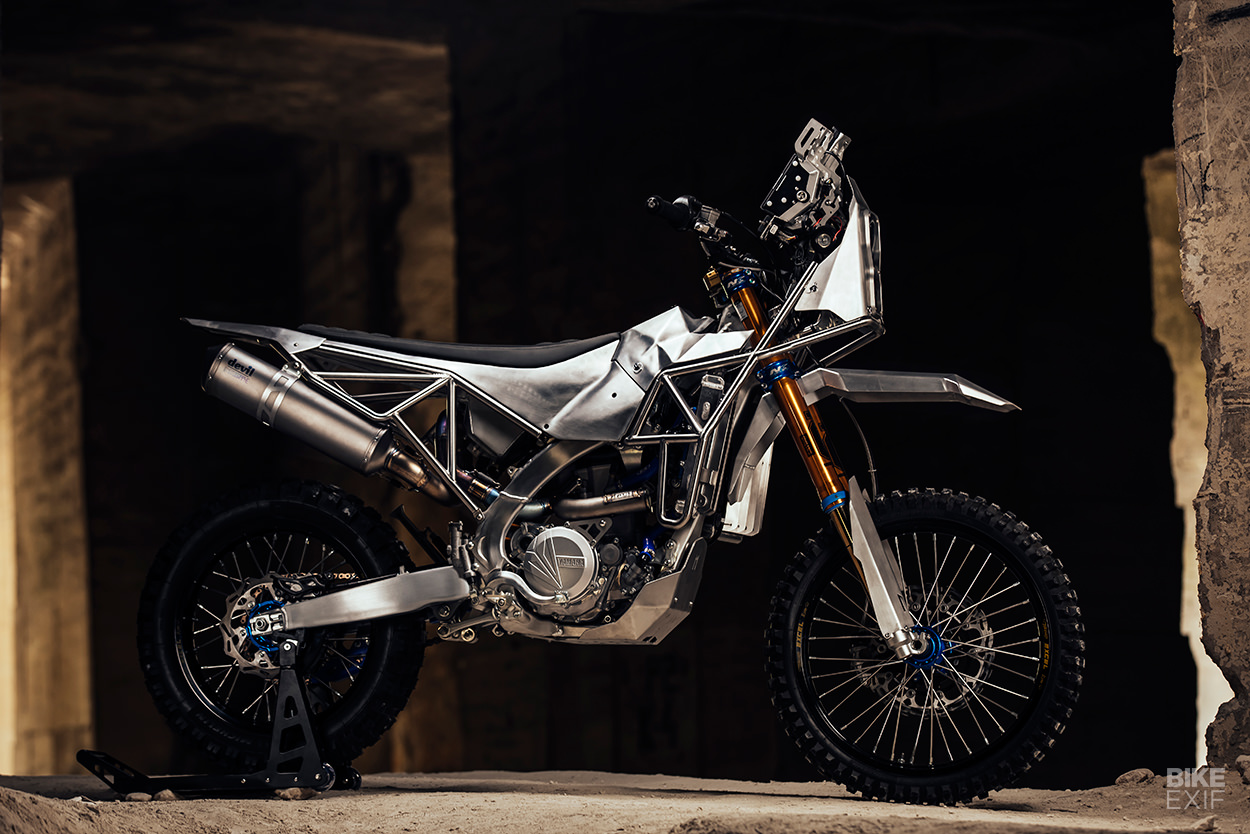 The garage tools and techniques might be the same, but there’s not a lot of overlap between race and custom bike building. At the simplest level, it’s a Venn diagram, with ‘function’ in one circle and ‘form’ in the other.

Occasionally a bike falls into that tiny overlap though, and the results can be incredible. This outlandish WR450F rally raid bike comes from the French outfit Le Motographe, and ramps up the style without sacrificing an iota of performance. 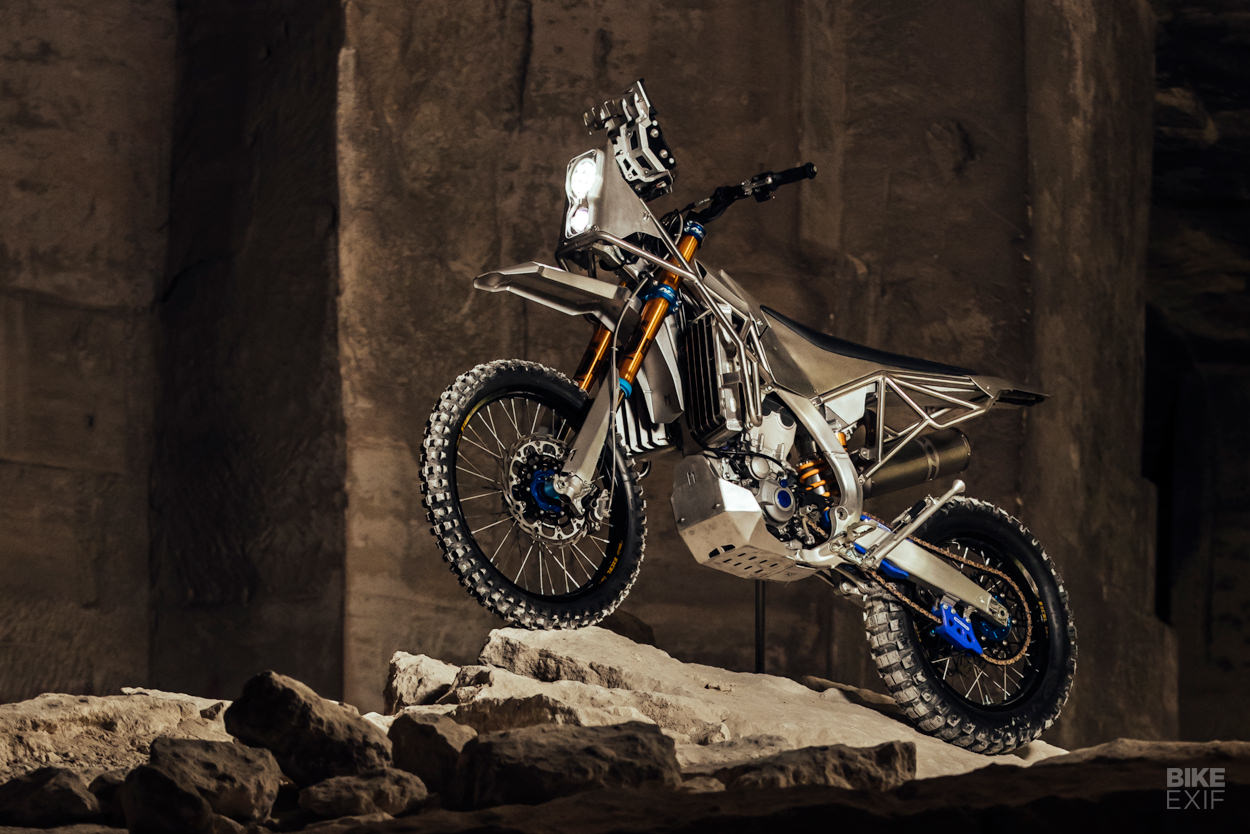 The two founders of Le Motographe are product designer Jérôme Mawois and metallurgist Yvan Bertona. Their workshop is in the small town of Castries in southern France, and the influence of their day jobs is clear to see in this beautifully crafted build.

Le Motographe have two WRF customs under their belts already, called ‘Skeleton.’ Those bikes were based on the 2004 WRF450, and handmade in stainless steel and aluminum. 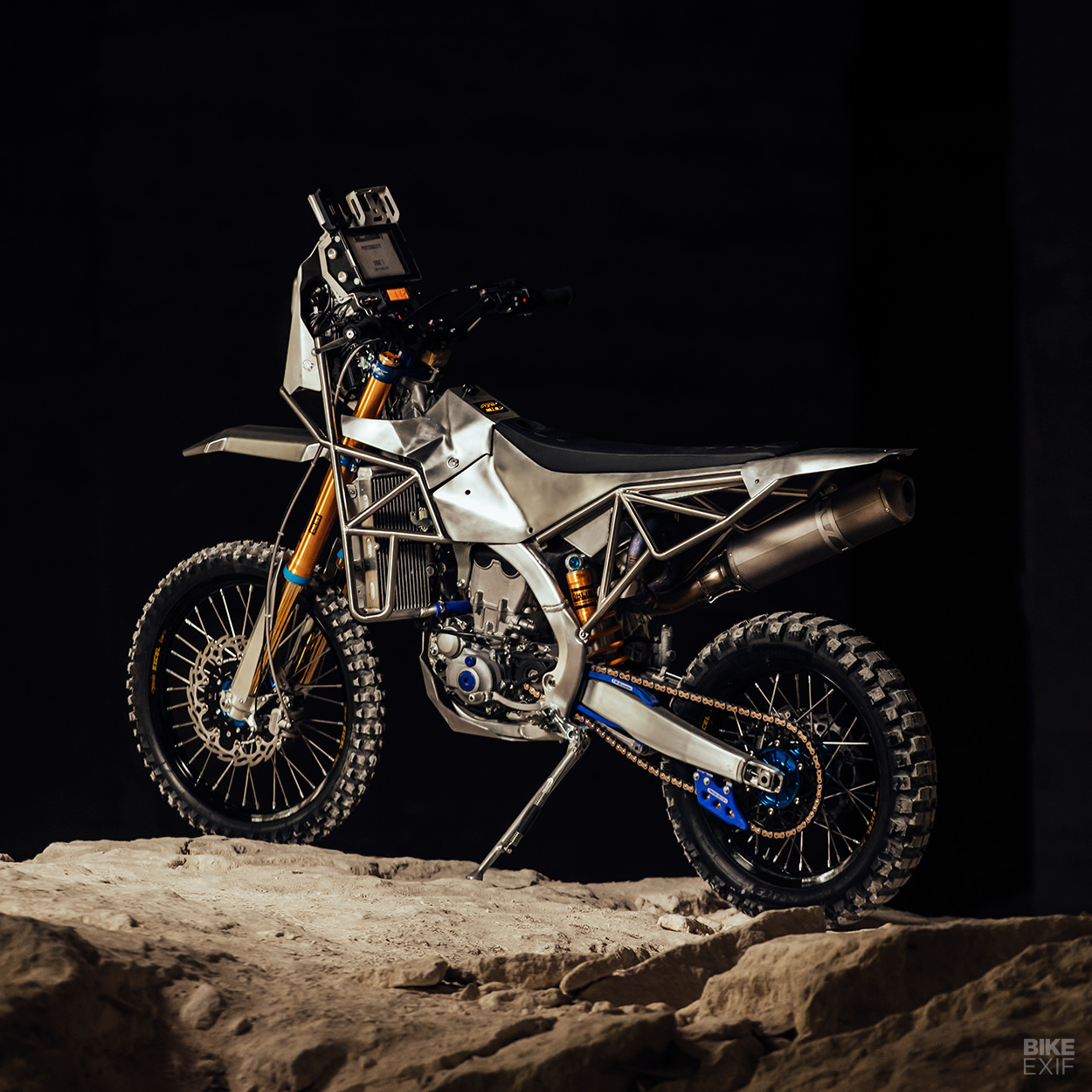 Today, one spends its time in the Californian desert, and the other lives in Europe. The client for this new build spotted the Skeleton EVO2 at Wheels & Waves, and commissioned a rally raid version. “We decided to start this time with a brand new bike, a Yamaha WRF450 with an aluminum frame and fuel injection,” says Jérôme. “It’s used as a base by current rally riders.”

Le Motographe’s first port of call was Drag’on Distribution, the Calais-based importer and fabricator of specialist rally parts. An eighteen-month build journey was about to start. 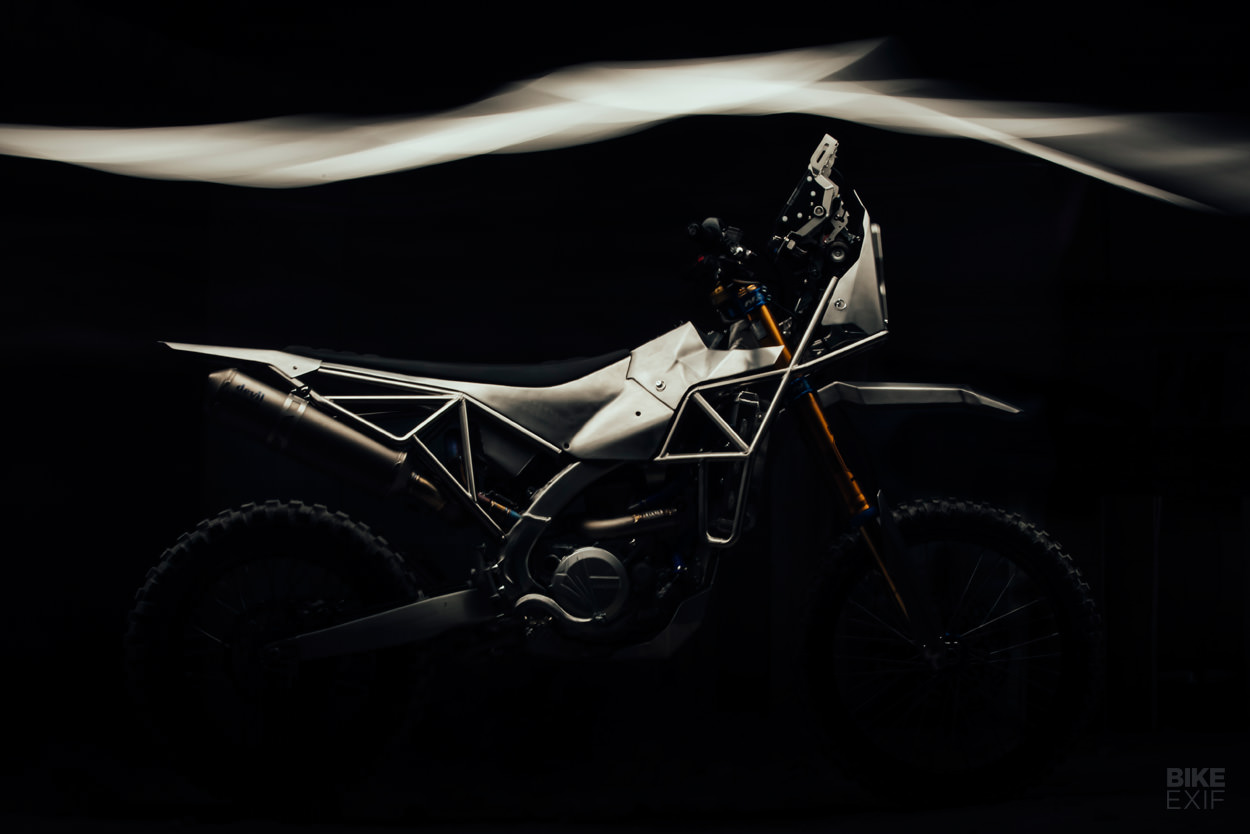 Apart from the original aluminum engine cradle and the motor itself—reprogrammed with new maps—everything else has been replaced, modified or made from scratch.

Jérôme and Yvan have designed and built a new tubular trellis frame that carries the tank and the air box, all meticulously crafted from aluminum. (Everything is easily removable, thanks to quick release fasteners.)  The tank holds a few more liters than the 7.9 of the factory bike, without going to the extreme of the 32-liter Dakar tanks. 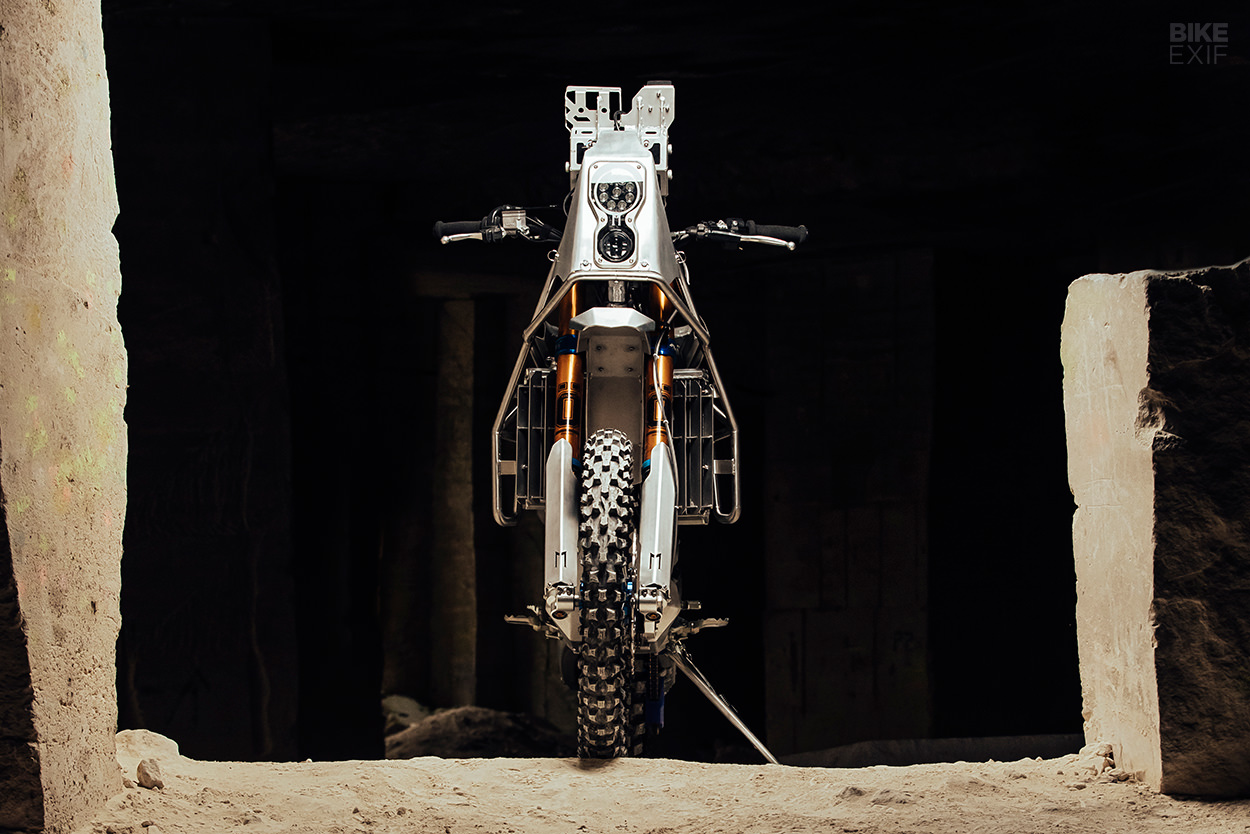 The new fenders and fork protectors are also made of aluminum, and diamond engraved—as is the engine guard. 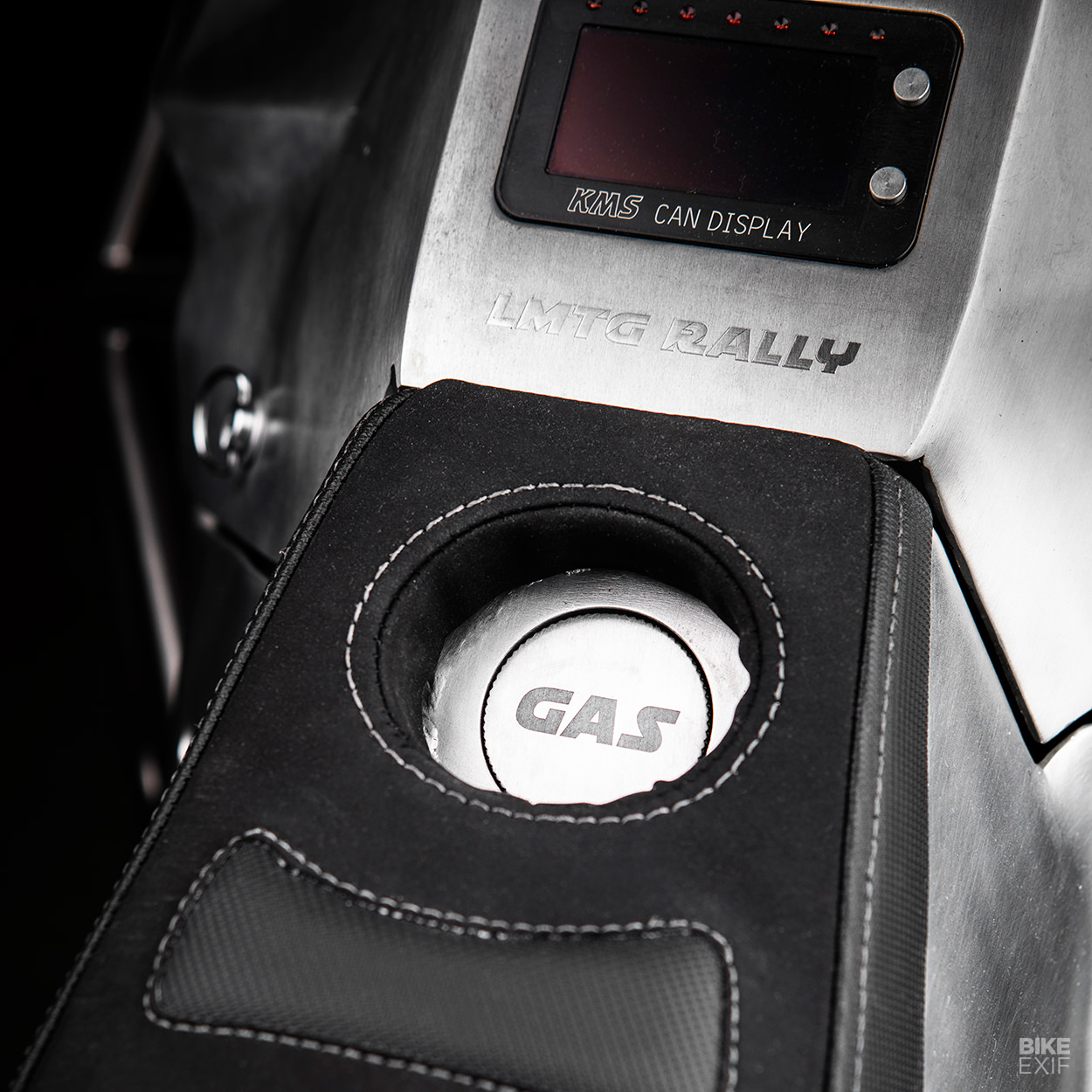 The airbox is home to a KMS screen hooked up to the CAN bus, and set up to provide constant feedback from the throttle position sensor, plus temperatures and rpm. Le Motographe have also added a GET Rally ECU with Traction Control and a 10-position switch that moderates the power delivered to the rear wheel.

A more obvious addition is  the navigation tower, with a scrolling road book above the handlebars, a slot for the GPS and repeater units usually provided during races, plus extra support for a personal GPS used by the customer. 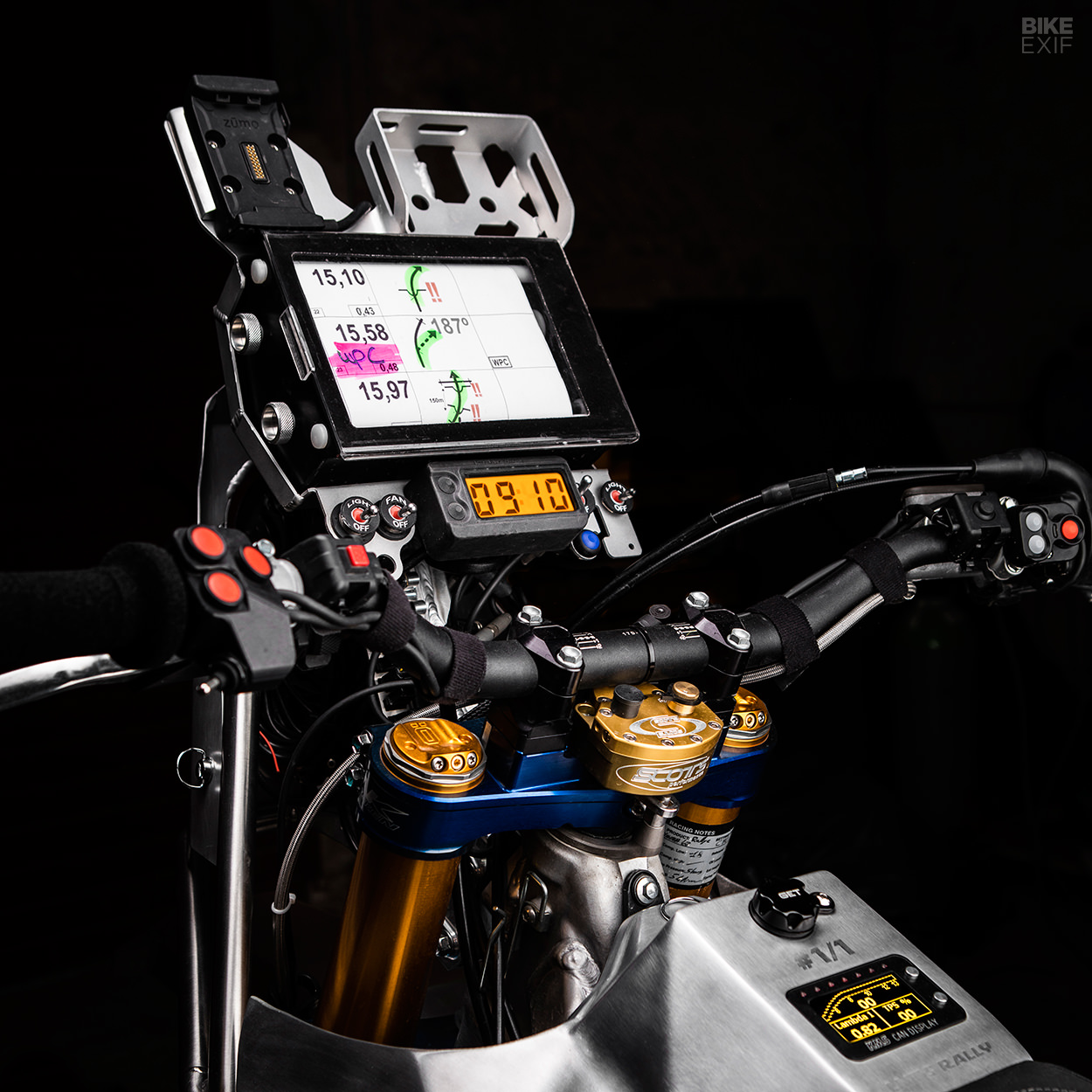 For night riding, there are two independently controlled LED headlights—one of which is long range. The lenses are protected by 3mm Plexiglas covers, and encased in a custom aluminum nacelle, wrapped around a machined frame. 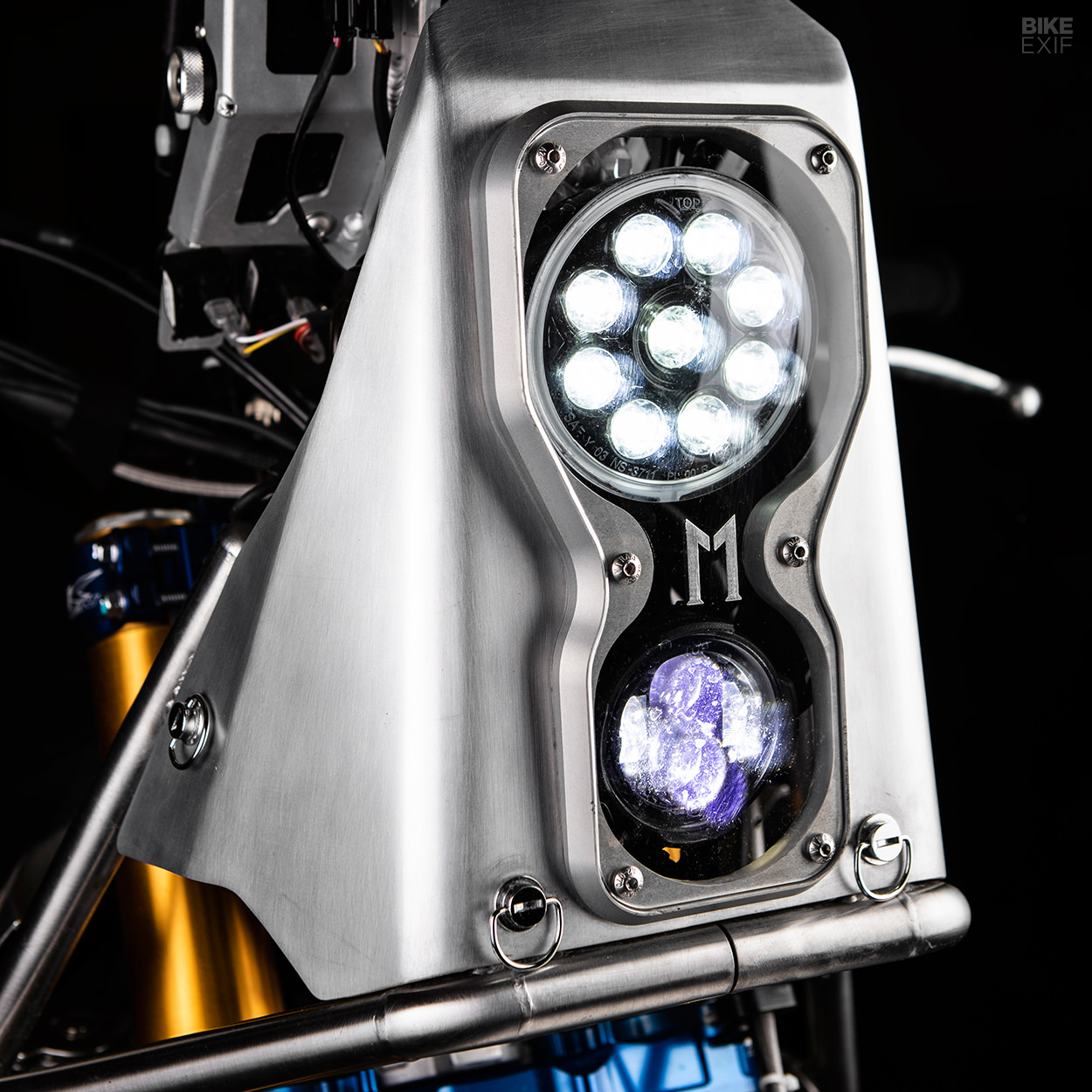 The engine internals remain stock for reliability’s sake, but Jérôme and Yvan have added a radiator with increased capacity—rated at two bars of pressure and equipped with a fan for cooling. It’s protected by custom stainless steel fins. 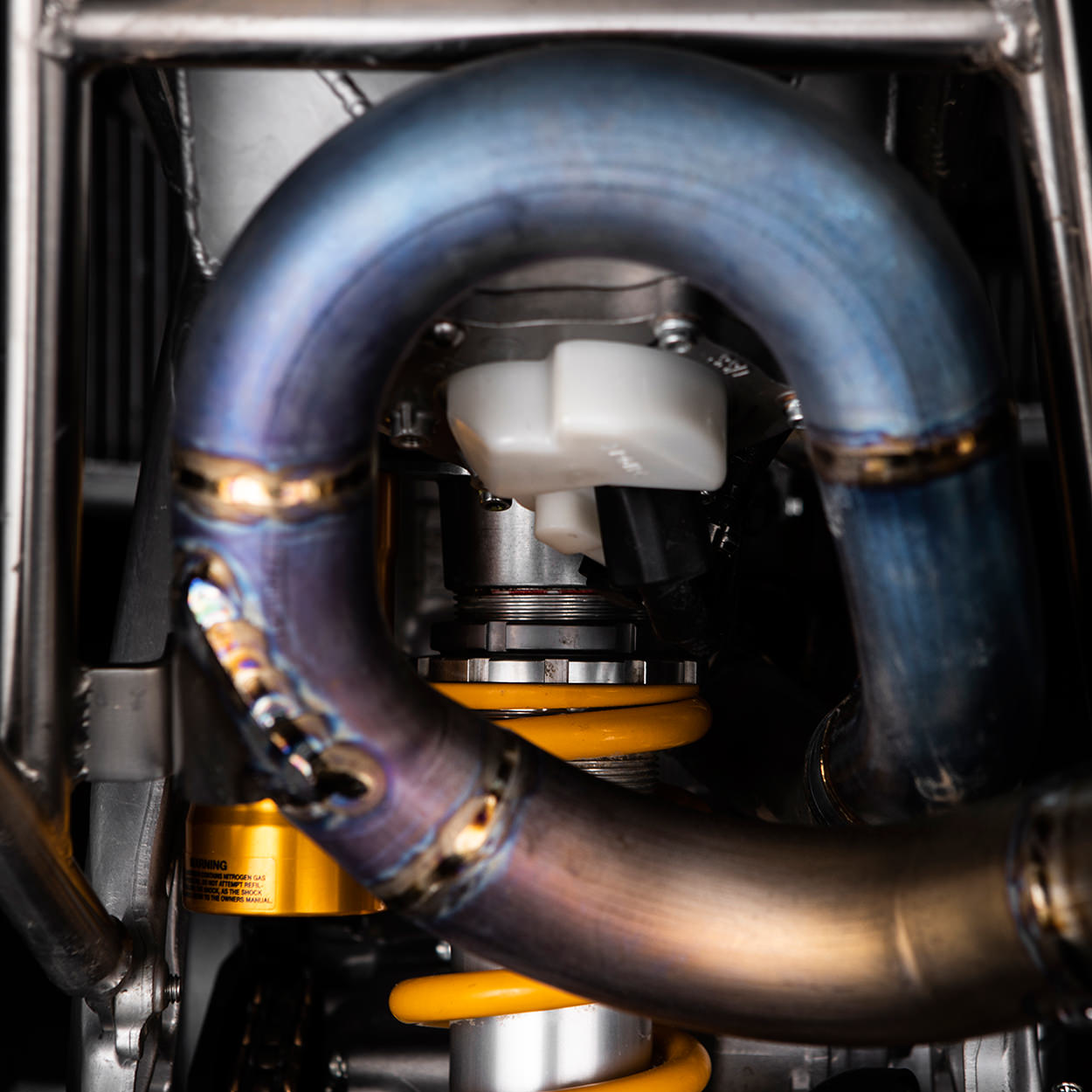 This WR450 rolls on Excel rims, laced up to motocross hubs from the Dutch company Haan, which are machined from billet 6082 T6 alloy. The tires are Michelin Desert Race, a compound that has racked up over 30 Dakar wins to date. For extra power and feel, the front brake is upgraded too—with a 310mm Motomaster disc and a machined bracket for the caliper.

“Everything on this machine has been thought out, designed, manufactured and tested,” says Jérôme. “Even the footrests have been designed and machined, using 7075 aluminum.” (They’ll soon be available via the Le Motographe e-shop.) 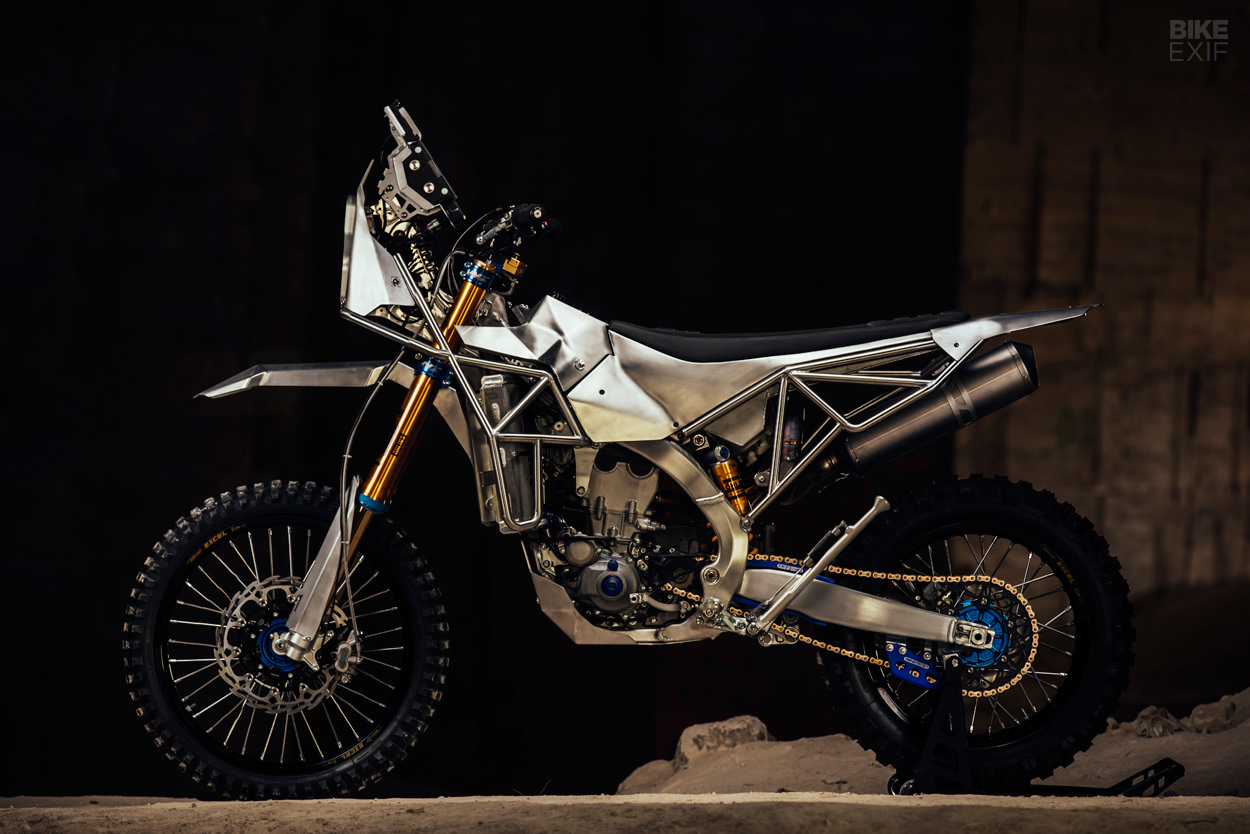 After the build was complete, it was time for testing. “We invited our customer to do a full day of riding with us. The program included 150 kilometers of tracks in the mountains, on terrain that was demanding for both for the machine and the rider. The result—a great day without any problems, and a satisfied customer!”

To get a second opinion, Le Motographe wanted to test the WR450F with a professional rider familiar with official factory bikes.  Racer Michael Metge agreed to try out the Yamaha at his training ground, with local media watching. 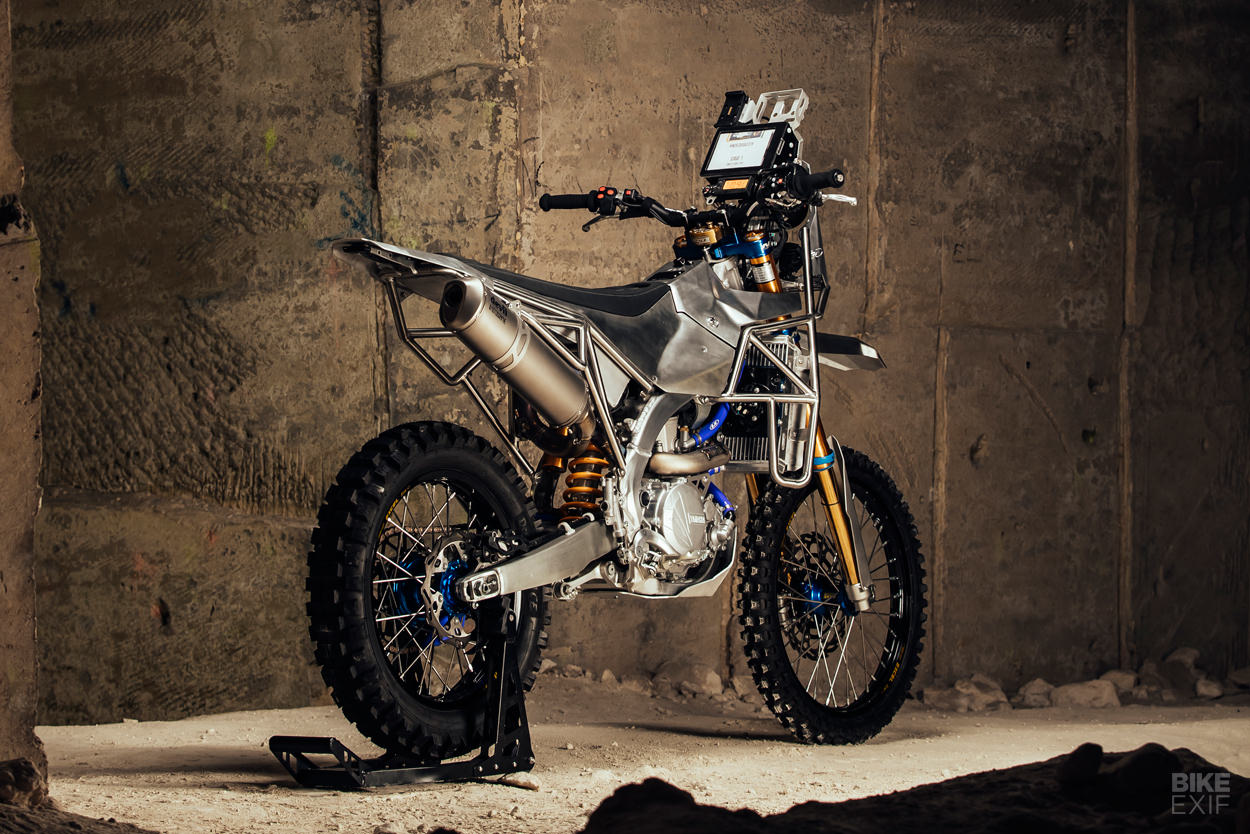 “Michael has raced in the Dakar seven times,” says Jérôme. “He’s an experienced rider with a great track record, and provided a real baptism of fire.” 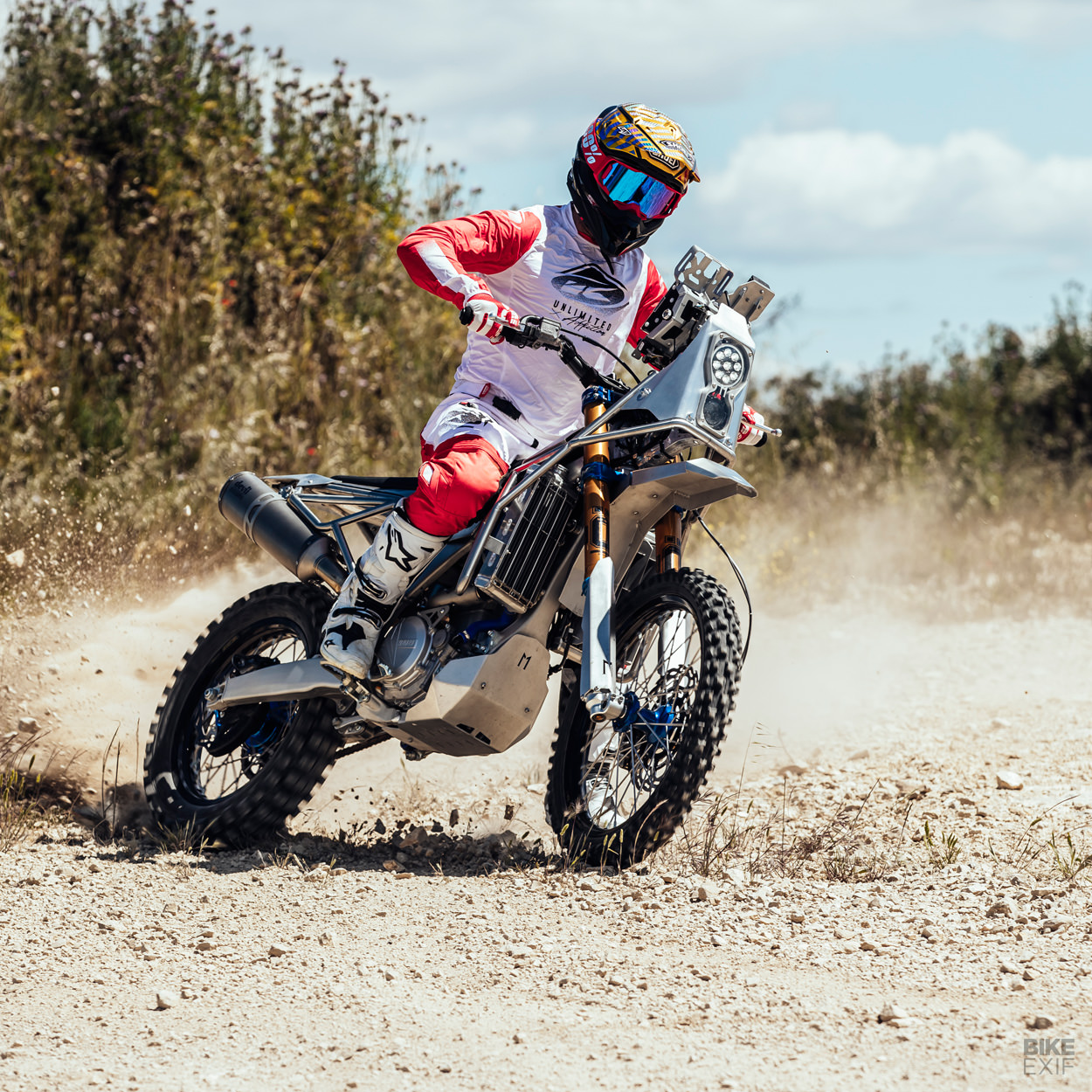 Jérôme and Yvan have delivered a bike with all the equipment and performance necessary for a Rally Raid, plus a hefty dose of custom style. More like this, s’il vous plaît! 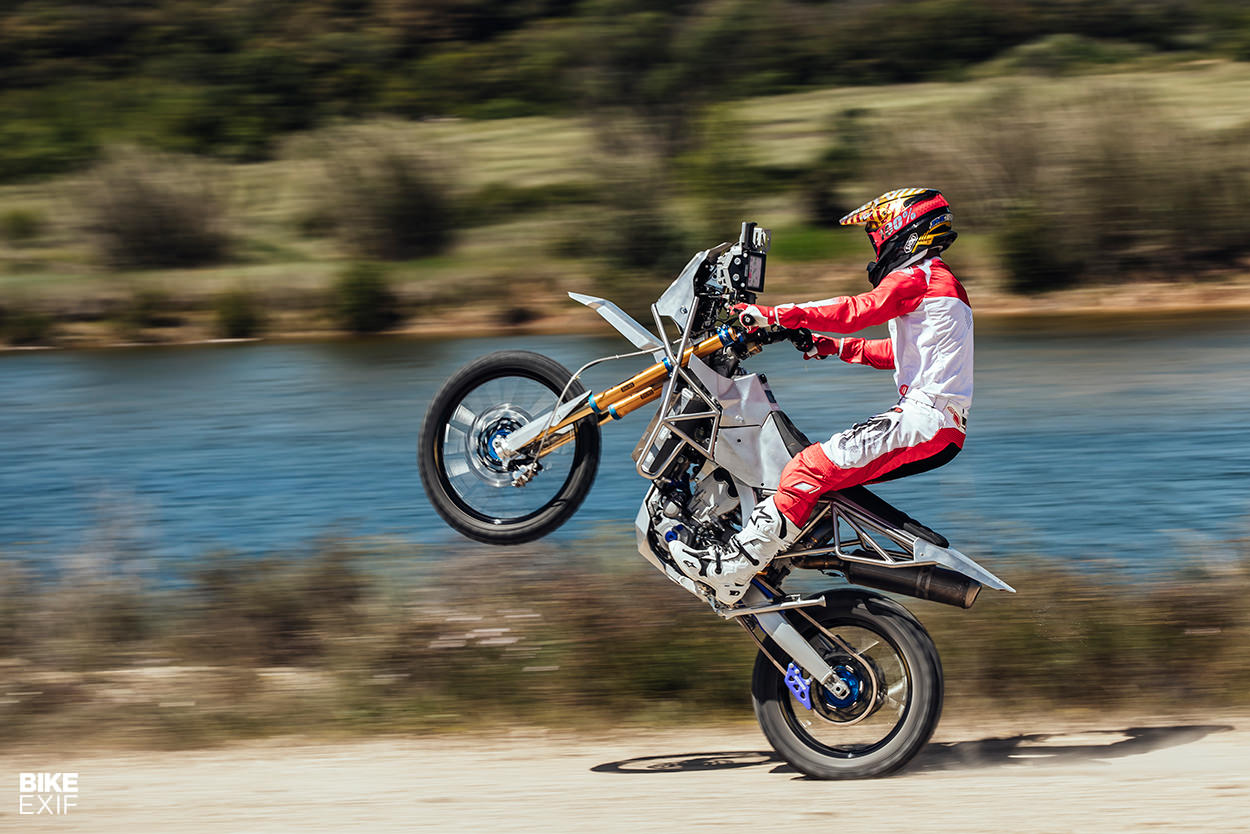