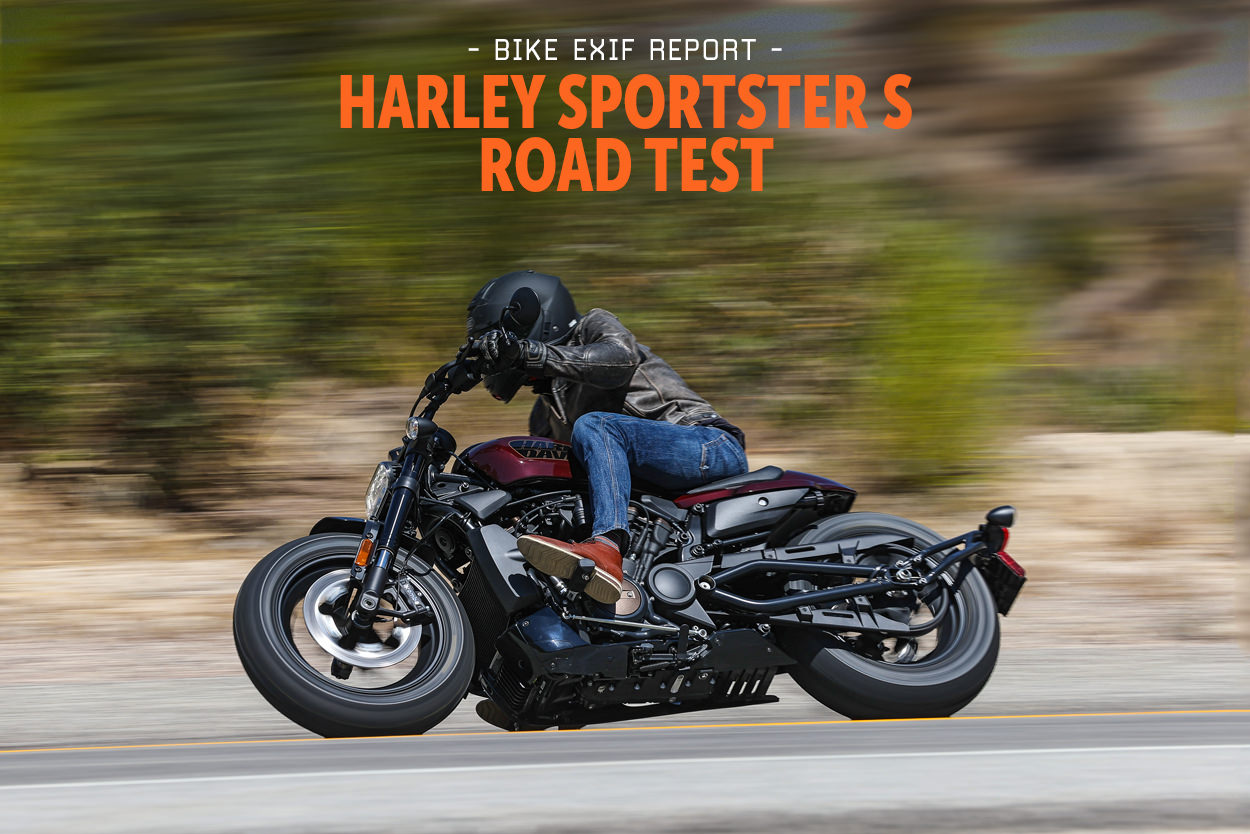 Engineering is easy. Lean on decades of technological progress, R&D like hell, and a modern manufacturer can build a mechanically competent motorcycle that satisfies the masses.

Style, on the other hand, proves elusive. It slips and shifts, deflecting fleeting trends and prevailing tastes while flirting with the culture zeitgeist. On a rare occasion a bike’s looks will resonate grandly, alchemizing desire through seemingly incidental gestures like the arc of a fuel tank, the chamfered edge of a cylinder head, or a just-so wheel-to-engine-to-handlebar proportion. But when it’s not quite right, motorcycle styling can fall off a cliff like a fashion faux pas from yesteryear. 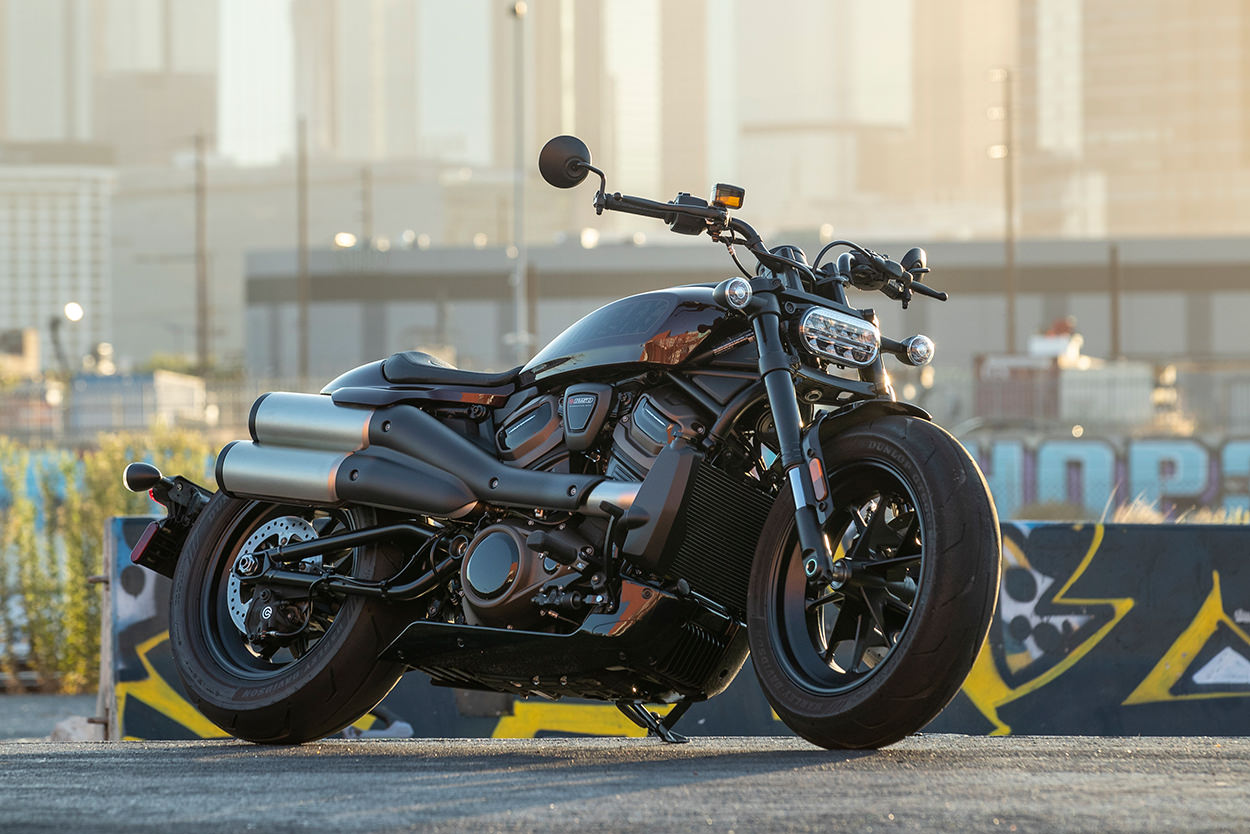 Harley-Davidson’s Sportster has profited richly from 64 years of evocative design, a freakishly enduring stretch that has outlasted some manufacturers. The Sporty’s stripped-down allure captured the imagination of 26 year-old Leo Payne, who purchased a first model year Sportster in 1957 that he eventually tinkered with and raced his entire life.

So bullish was he on the Harley that he delighted in riding his American outlier with the edgier BSA and Triumph crowd in his hometown of Cedar Rapids, Iowa, because the local HOG group was too geriatric. Payne bored-out, shaved down, and optimized his Hog over the course of decades, transforming it into a nitromethane-burning animal dubbed the Turnip Eater, so named for its appetite for hopped-up Triumphs. 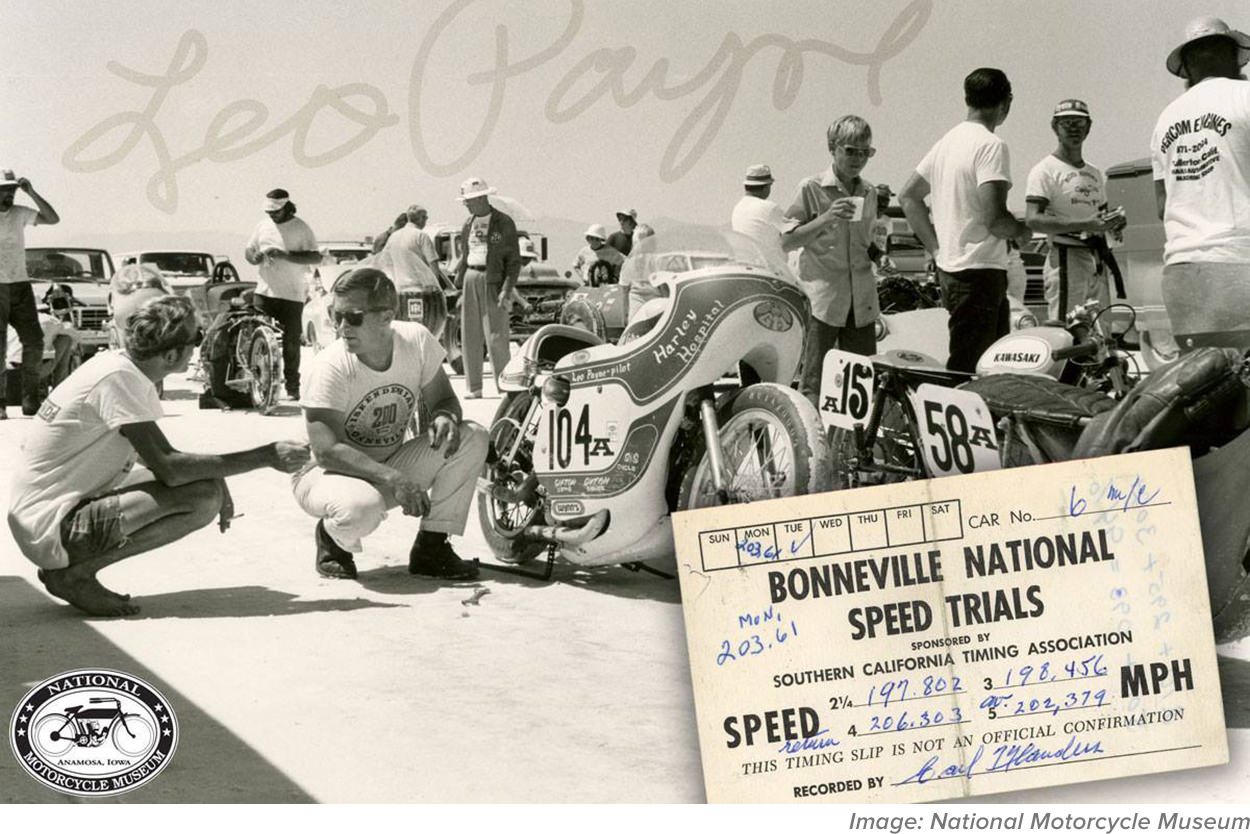 In its ultimate iteration, the transmogrified Sportster was strapped with an XRTT fairing and broke the non-streamliner record at Bonneville in 1970, achieving a two-way average speed of 202.379 mph.

Why eulogize a long-dead Harley fanatic in 2021? Because the freshly re-imagined Sportster S would have boggled and befuddled the late, great Leo Payne. The new machine bears virtually no visual resemblance to Sporties of old, its clean sheet redesign ditching the familiar hoop frame in favor of a setup that leverages the engine as a stressed member. 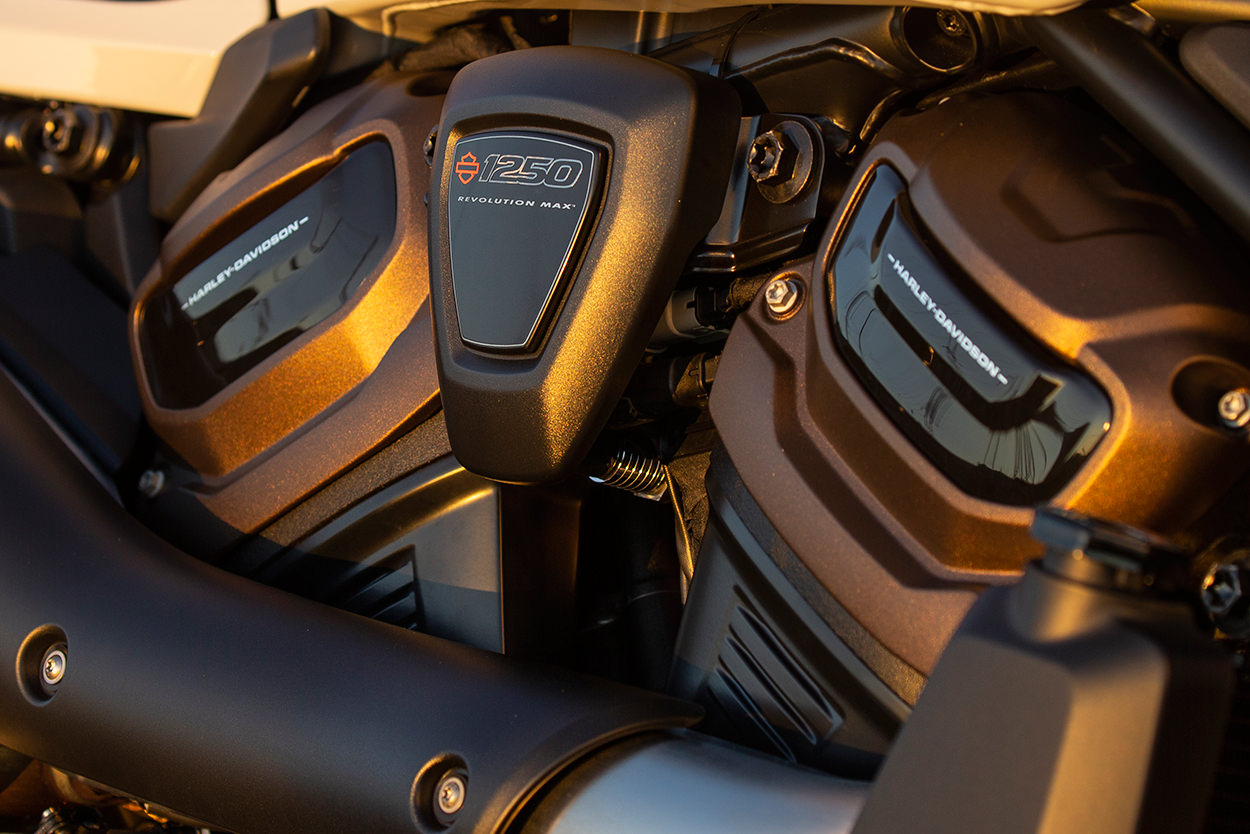 The powerplant, a liquid-cooled 1,252cc Revolution Max variant based on the Pan America, also shares as much with the Sportster’s outgoing 883cc and 1,200cc mills as cheese and chalk—more on that later.

Although it claims a near-identical rider triangle as the outgoing Forty-Eight, the Sportster S’s appearance defies its arms-forward ergonomics. Designer Brad Richards says the profile “emphasizes the powertrain by shrinking everything else,” resulting in a tank that stretches flatter over the big v-twin while holding 3.1 gallons of fuel. That’s a notable gain over the 1,200cc predecessor’s miniscule 2.1-gallon reservoir (the smaller-engined 883 model managed a 3.3-gallon tank). 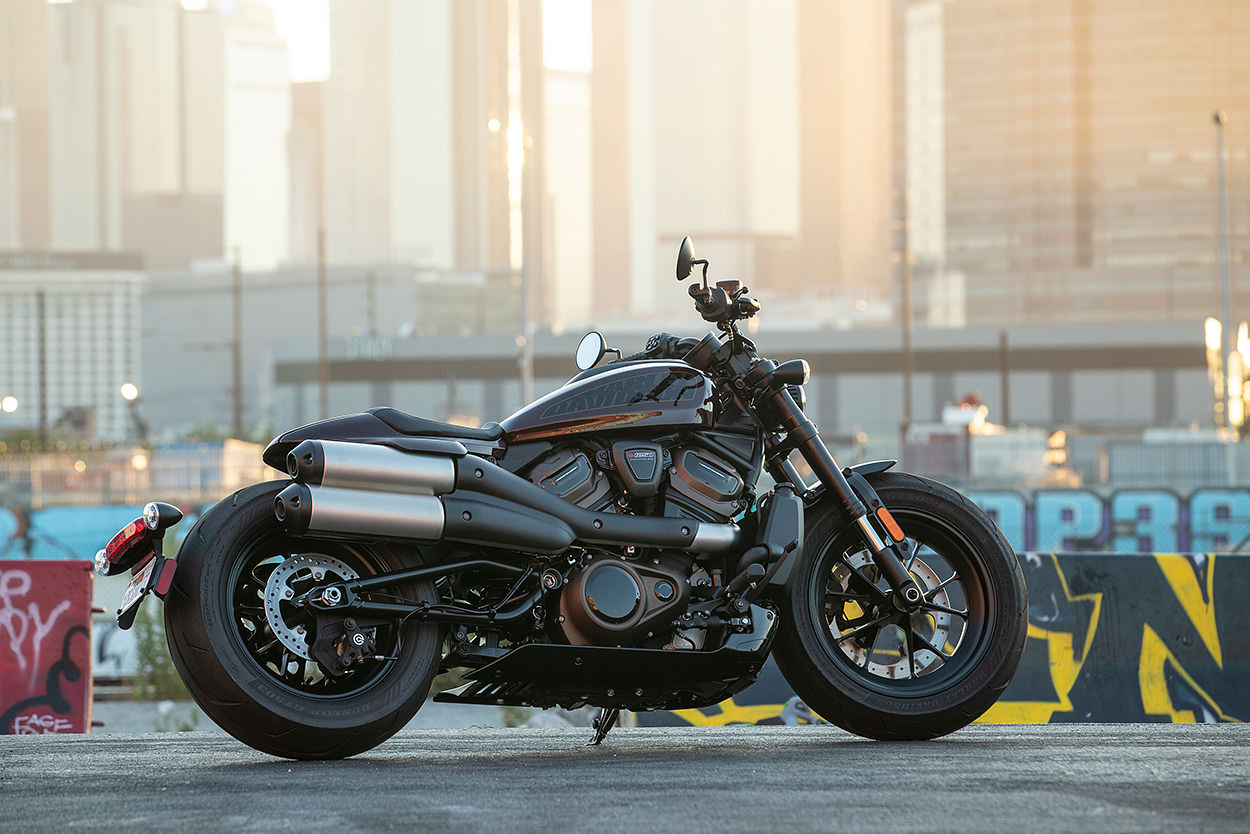 Up front is a 17-inch cast aluminum wheel wrapped in balloon-style 160mm Dunlop rubber, echoing the Forty-Eight and Fat Bob. A pill-shaped LED headlamp discontinues the traditional Sportster convention, as do the XR750 flat tracker-inspired high pipes. Tucked behind the slim, 29.6-inch saddle is a 16-inch, 180mm tire, and behind that a strangely stout tubular steel rear hugger that holds an LED brake lamp, two turn signals, and a license plate.

Despite its departure from its predecessor’s heritage, the Sportster S is an attractive package with overtly muscular cues that don’t stray far from the tried-and-true Harley playbook. The S is a bit of a blender of H-D cues—Harley’s press materials even assert that it “employs a mash-up of diverse styling influences,” a surprisingly honest way of saying that the new iteration throws out many of the elements that were near and dear to old school Sportster aficionados. 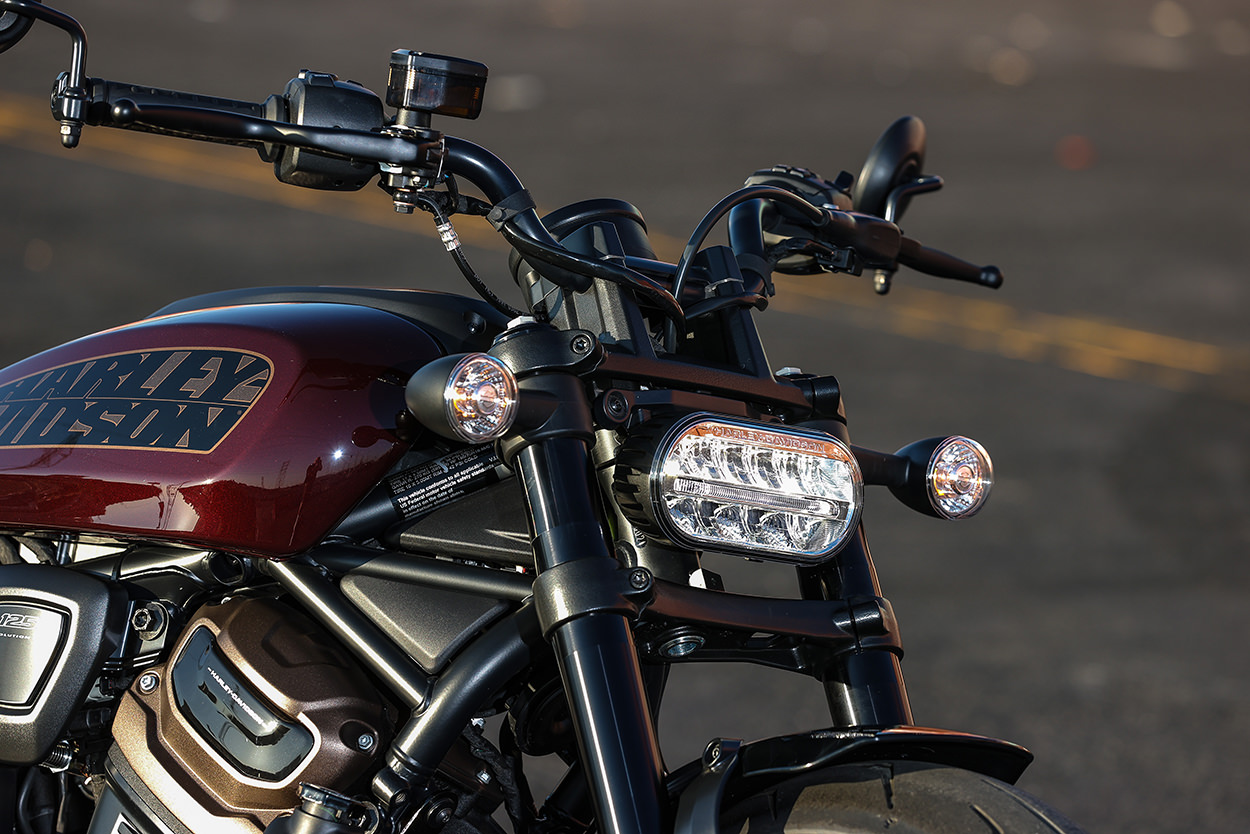 “There was a certain lack of evolution to the Sportster that was endearing to people,” admits Richards, describing the blue-sky redesign process, which involved brainstorm sessions and, yes, extensive market research—“… more customer research than ever,” according to Harley PR boss Paul James.

But Richards brings it back to the ride. “The whole time [design ideation] is happening, you’re trying to make sure you capture the essence of Harley-Davidson with a characterful experience. You’re on the bike, there’s a certain texture to the way it sounds, the way it feels, the way it emotionally connects to you. 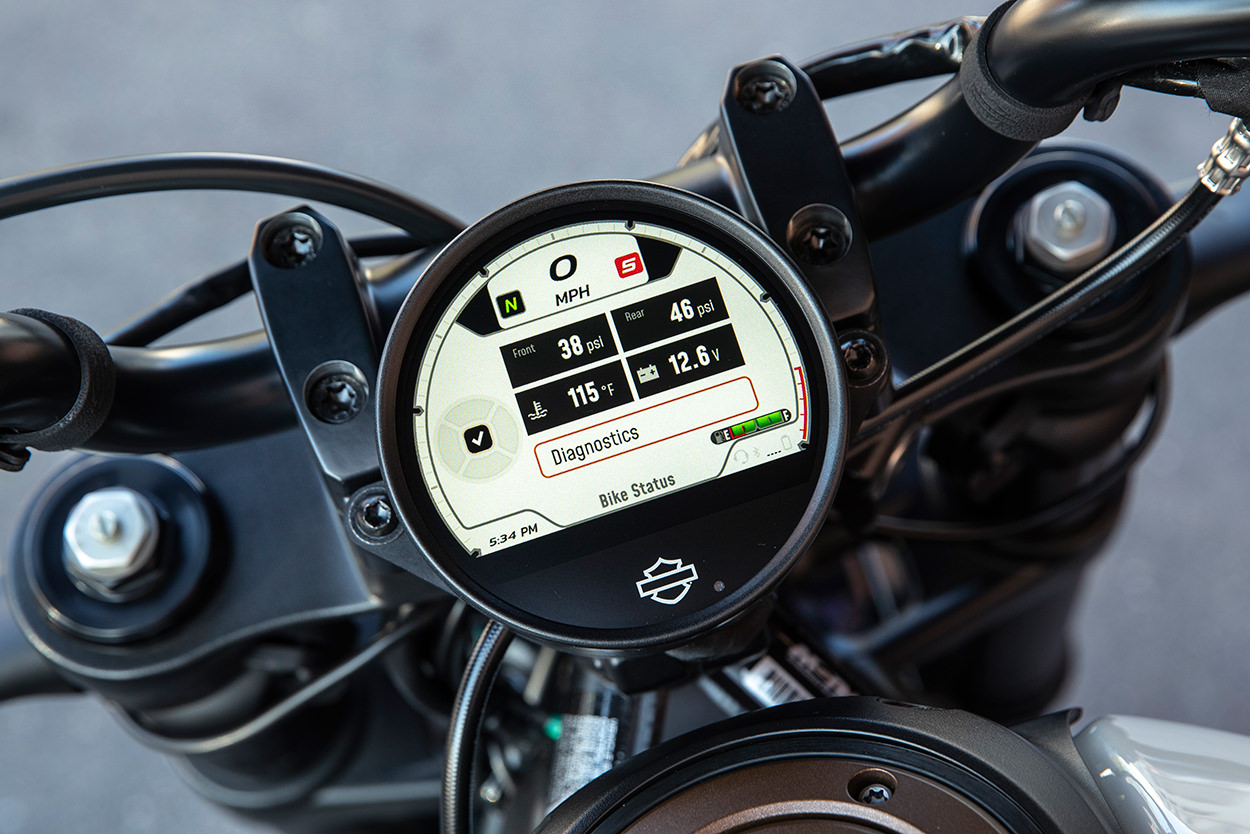 Swing a leg over the Sportster S’s saddle, and you’re met with an all-new interface that fully embraces the digital age. Up front is a 4-inch TFT screen housed in a cleanly finished, thin-rimmed, smartphone-like enclosure. Flick the rim around the start button with the wireless fob stored on your person, and an animated bar and shield materialize on the screen.

Once within the menu system, the left handgrips controls can link a smartphone to the screen via the H-D app, displaying everything from navigation graphics to Bluetooth audio and phone controls. Bike settings, from ride mode to power delivery, engine braking, ABS thresholds and traction control modes can also be managed in preset or customizable settings. 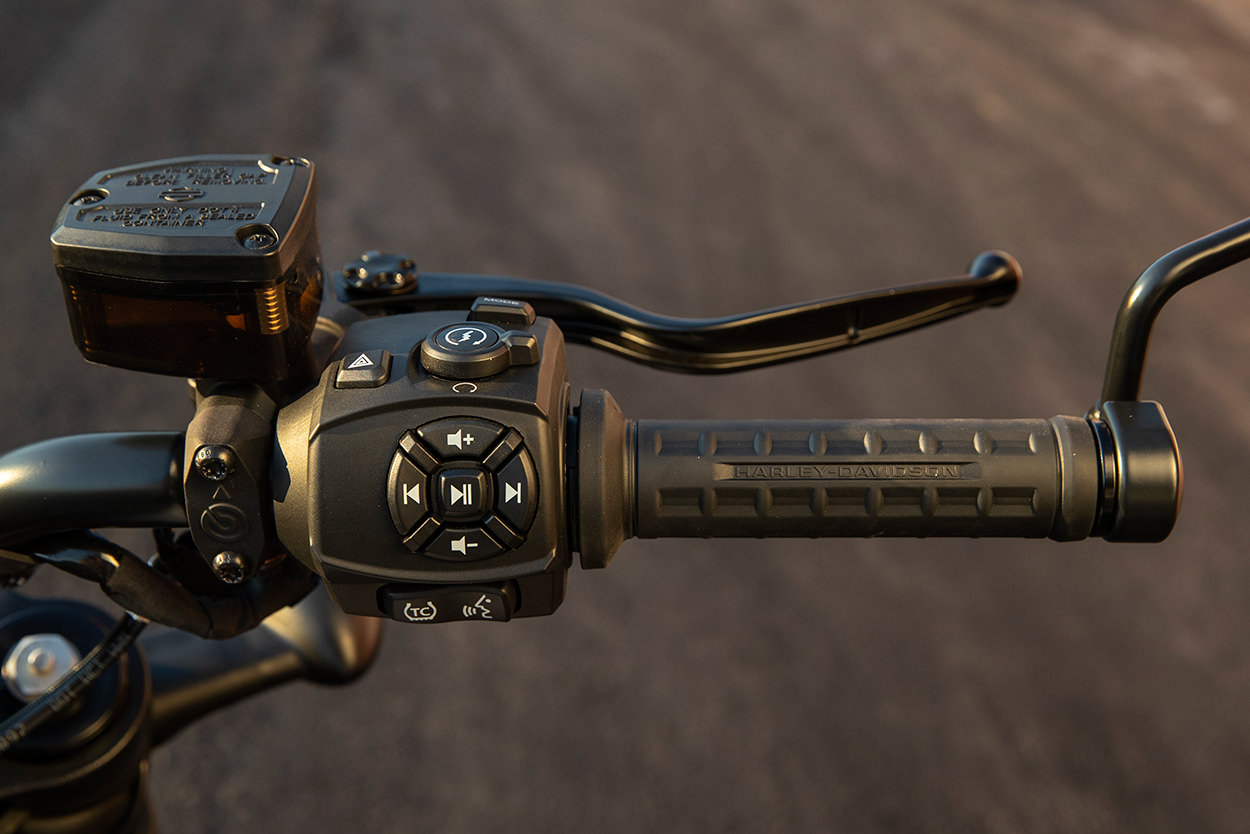 Hold the start button, and there’s a moment’s pause before the big twin comes to life, shooting spent exhaust and saucy decibels just past your right thigh. The 60-degree Revolution Max is a smart, liquid-cooled powertrain that leapfrogs the old air-cooled lumps with everything from four-valve heads to variable valve timing.

Tuned for Sportster S duty, it produces 121 horsepower and 94 lb-ft (versus the Pan Am’s 150 hp, which produces the same torque only at higher rpms.) 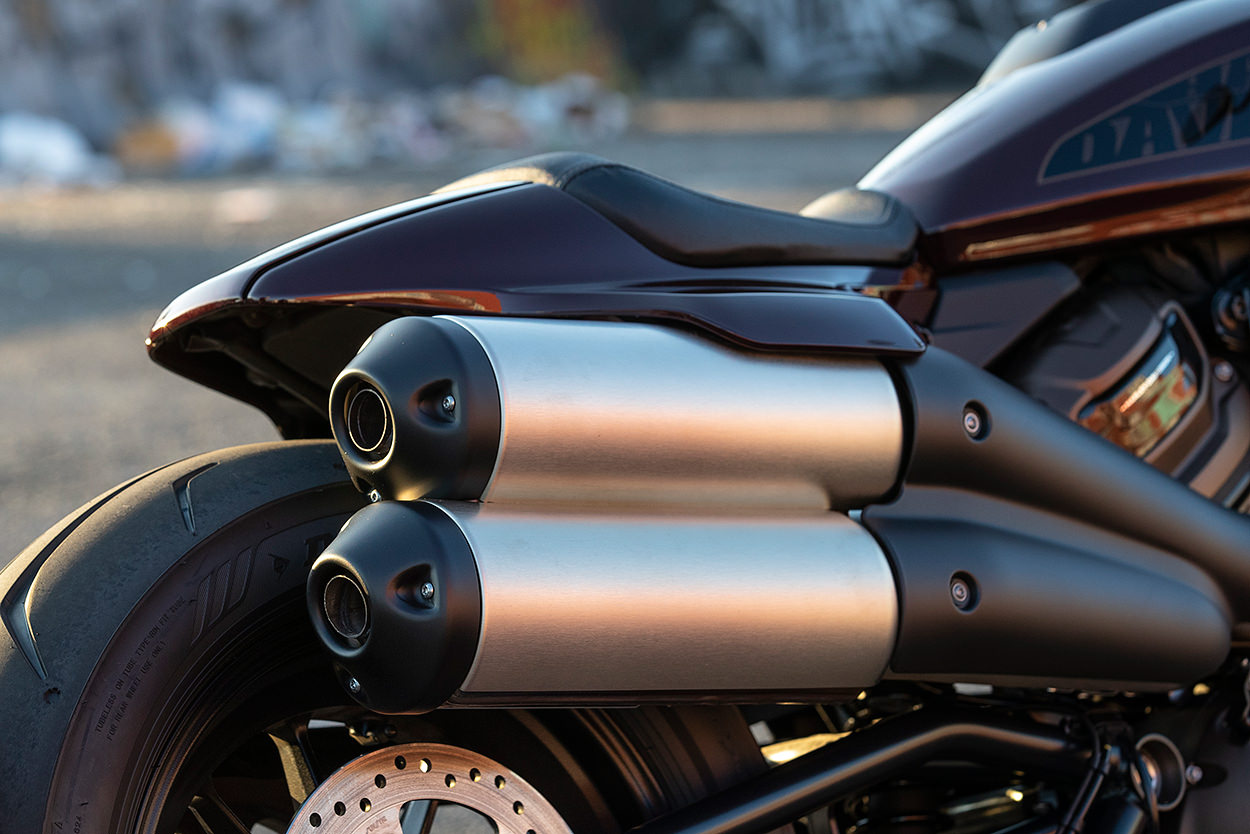 Don’t bother showboating the engine’s 9,500 rpm rev range at idle; the bike’s electronics neuter the max engine speed at a standstill, proving that legislators and engineers will enjoy the last laugh—at least until the aftermarket finds a workaround.

The new Sportster comes with standard forward foot controls, or a mid-mounted setup for an extra $660 on top of the bike’s $14,999 starting price. I’ve got a 32-inch inseam, and found the forward controls surprisingly manageable in light of experience with other, more raked-out Harley models; however, I found the stock shifter positioning a tad high for my liking. 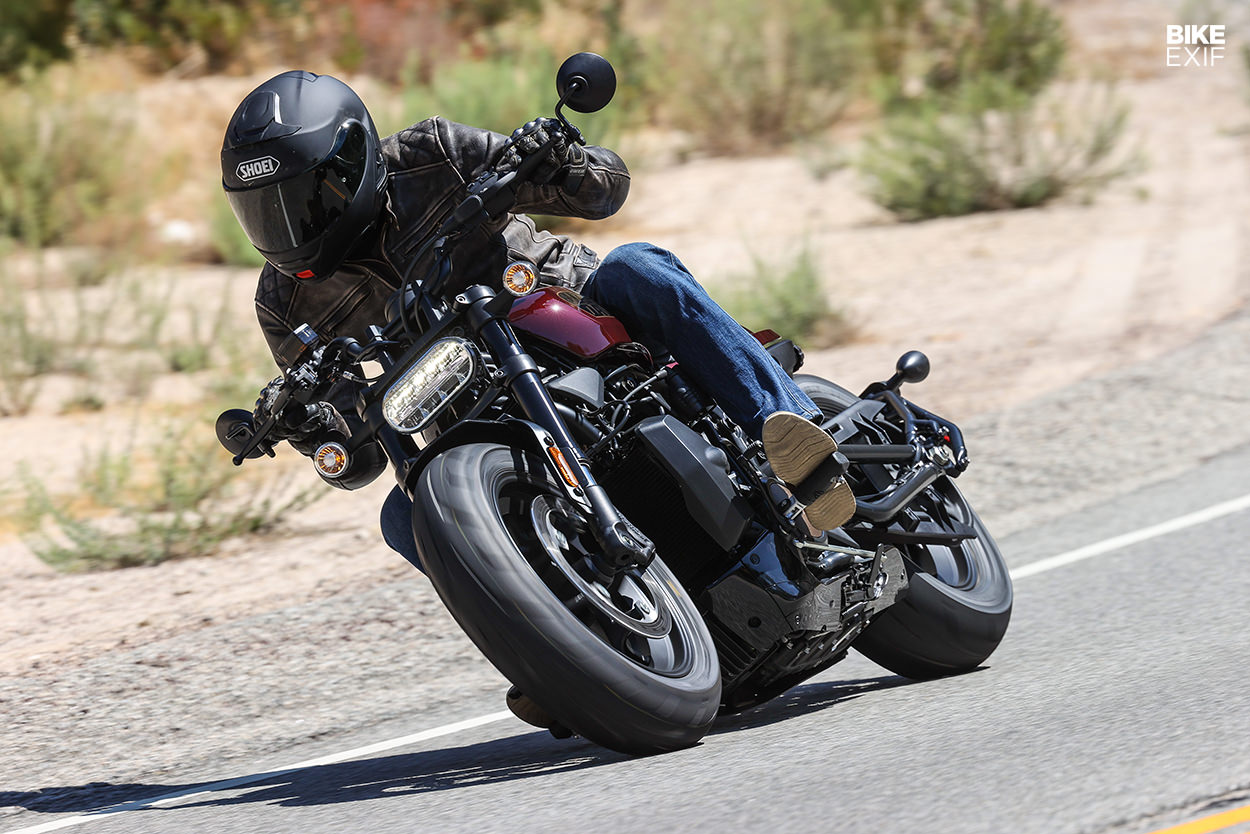 Release the clutch, and the six-speed clicks into gear with solid, smooth action. There’s copious torque on hand at low rpms, and the Revolution Max is all but impossible to stall from a standstill, aided by a curb weight of 502 lbs, which is a full 62 lbs lighter than the outgoing Iron 1200.

The energy-dense powerplant employs a number of measures against overheating, including a large front radiator, engine oil cooler, and cylinder deactivation system that discreetly makes its status known at key-up by briefly displaying a green cruise control indicator (for cylinder deactivation on), or orange signifying “off.” Simply twist the throttle forward before starting the engine to switch settings. 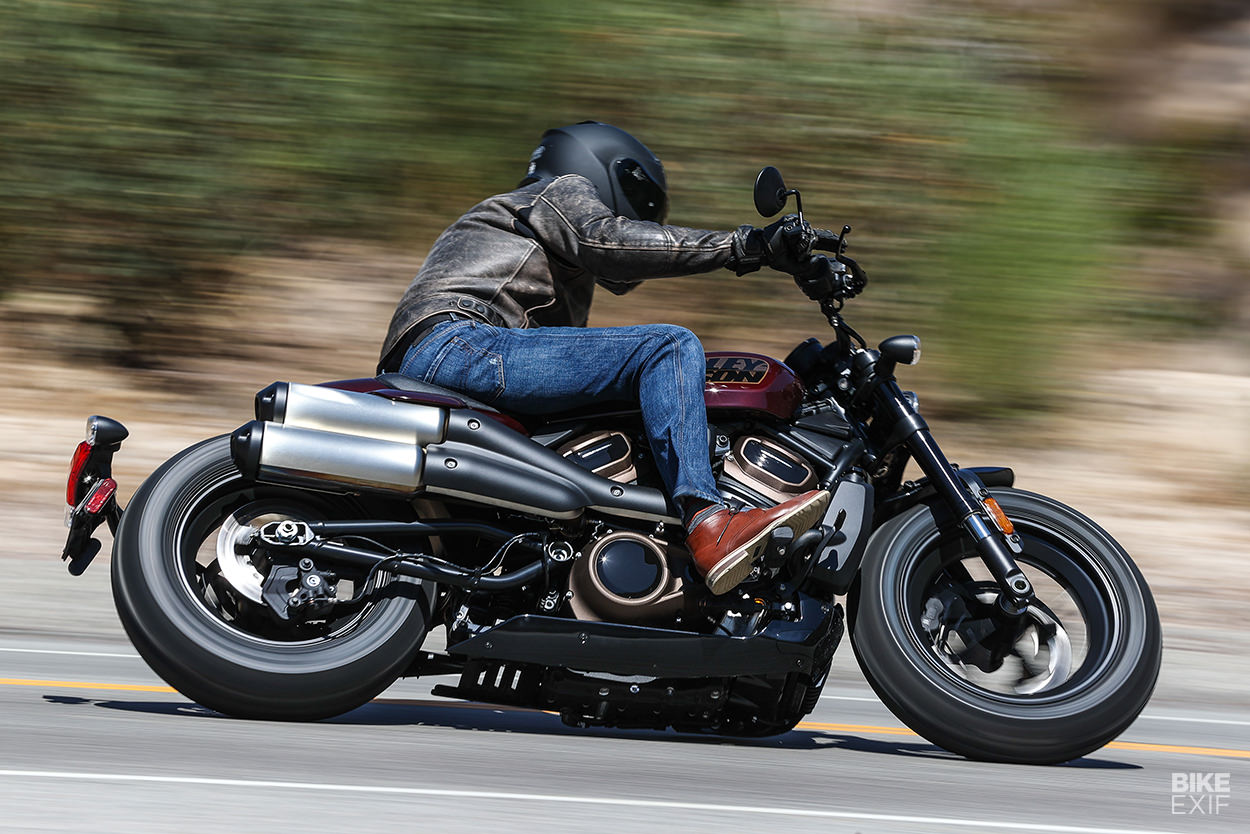 My Sportster S ride involved jousting through downtown Los Angeles in 90+ degree heat, which revealed quite a bit of thermal energy emanating from the exhaust pipes and left side of the engine, despite the cylinder deactivation being active. The effect became more pronounced when standing at stoplights with my thighs against the side of the bike, but dissipated at speed when our small group ascended into the nearby Angeles Crest Highway’s two-lane blacktop.

We were led by racers Travis and Kyle Wyman, the latter of whom clinched the King of the Baggers championship just a few weeks earlier, but exhibited enough self-control to limit the dragging of hard parts along the twistier stretches. 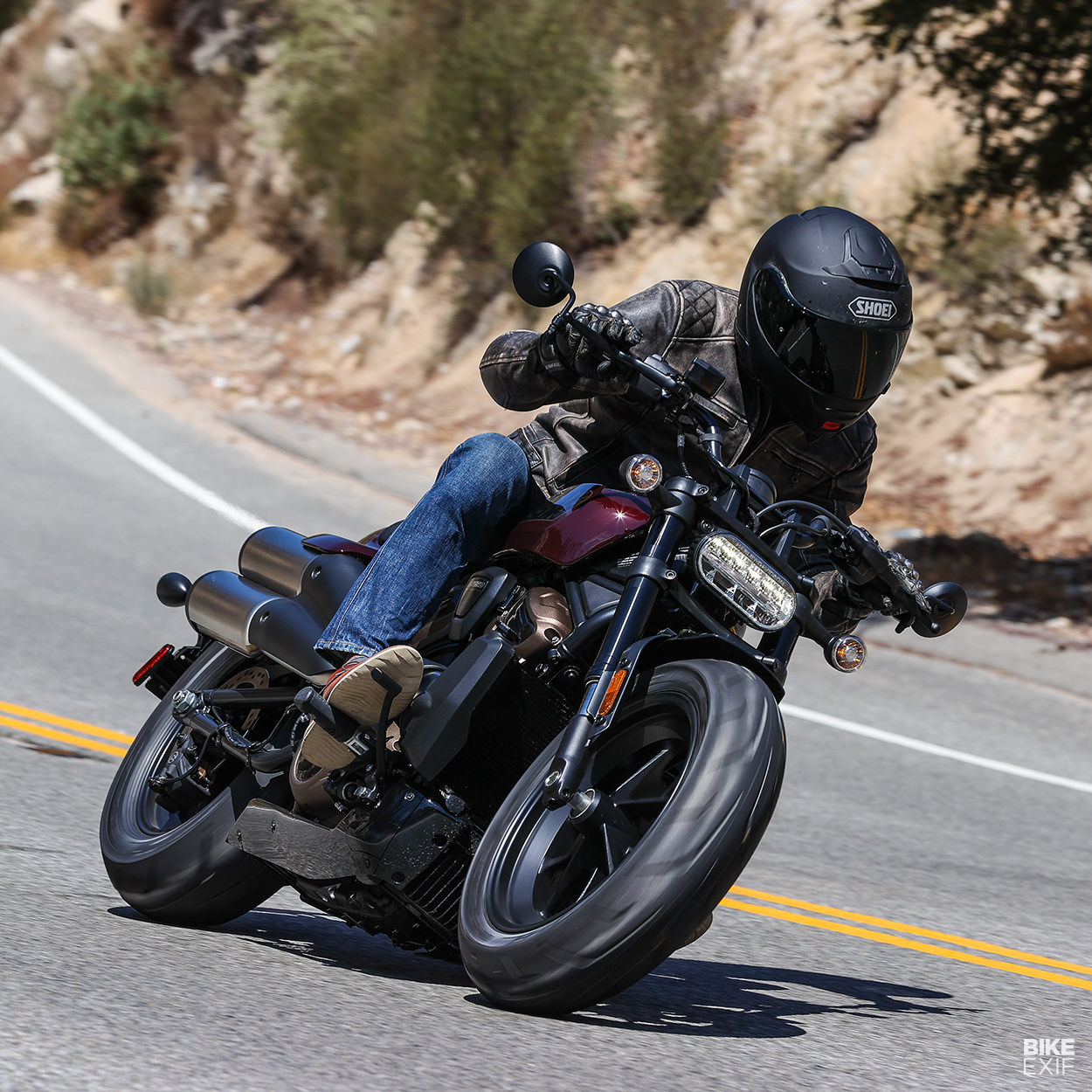 The Sportster S’s 43mm fork steps up with an inverted setup that’s compression, rebound, and spring preload adjustable. Though it yields the same 3.6 inches of travel as the outgoing Forty-Eight, the new linkage-mounted rear monoshock delivers 2 inches of movement, a considerable improvement over the old model’s puny 1.6-inch figure. Even more crucially, the new Sporty is capable of leaning 34 degrees left or right, an improvement over the predecessor’s 27-degree scrape angle.

The Sportster S turns in securely and intuitively, in spite of its cartoonishly fat front tire, whose convex profile is visible directly from the saddle. Stability and handling ease are the name of the game, with this Harley offering enough grip and bump management to feel confident on some of the more challenging surfaces along Angeles Crest’s 66-mile long route. 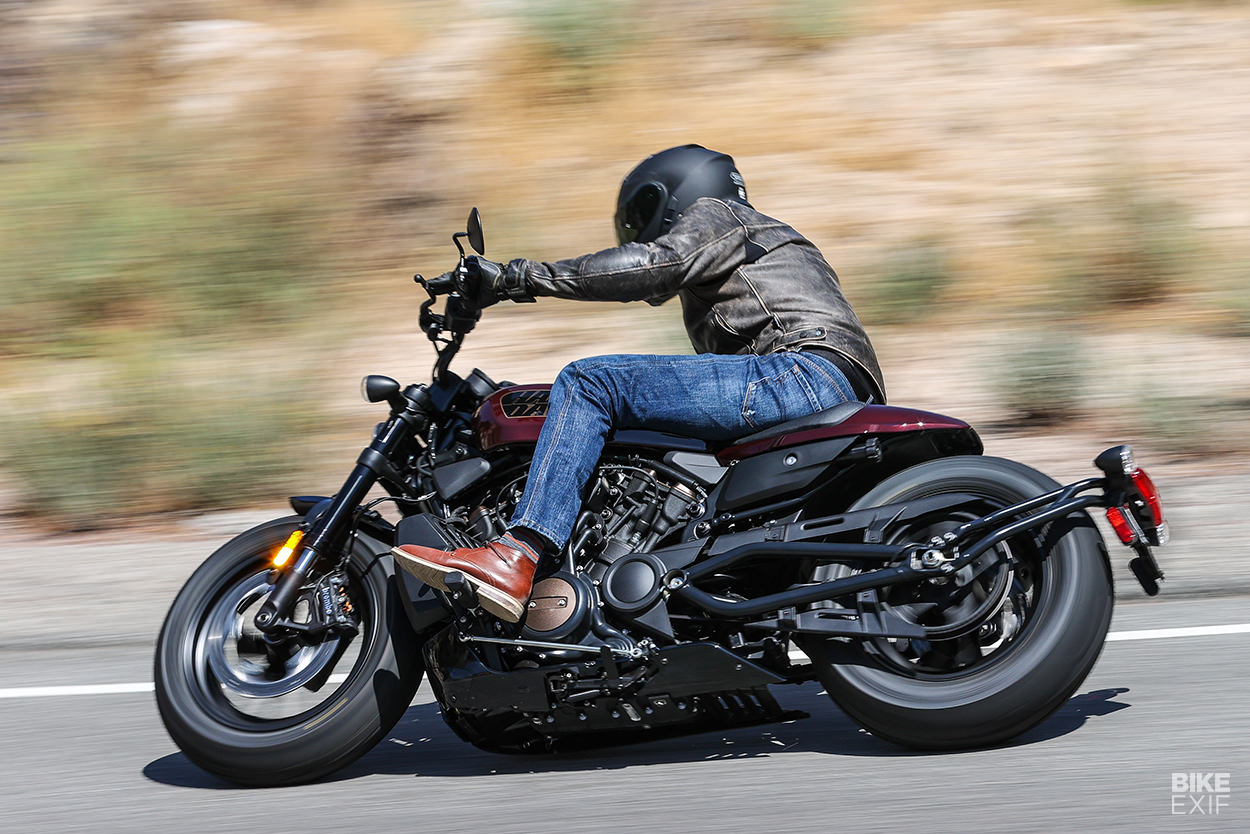 While it doesn’t handle like a superbike or turn-in with the crispness of a skinny-tired smaller bike, the Sportster S does manage to defy its visual heft, offering an entertaining and involving way to link its easy-paced bank angles with engaging squirts of torquey engine. Incidentally, while the mid-mounted controls do feel a tad sportier, they also require a more compact riding position and do not enhance available lean angles, which might make forward controls more alluring to the hardcore cruiser crowd.

With most of the power available in the mid-range, the v-twin feels ready and able to annihilate straightaways, especially when the drive mode is in its more aggressive settings. Engine braking adjustability is also a welcome feature, another incremental item that explains why Harley’s website categorizes the Sportster under the “Sport”, not “Cruiser” banner. 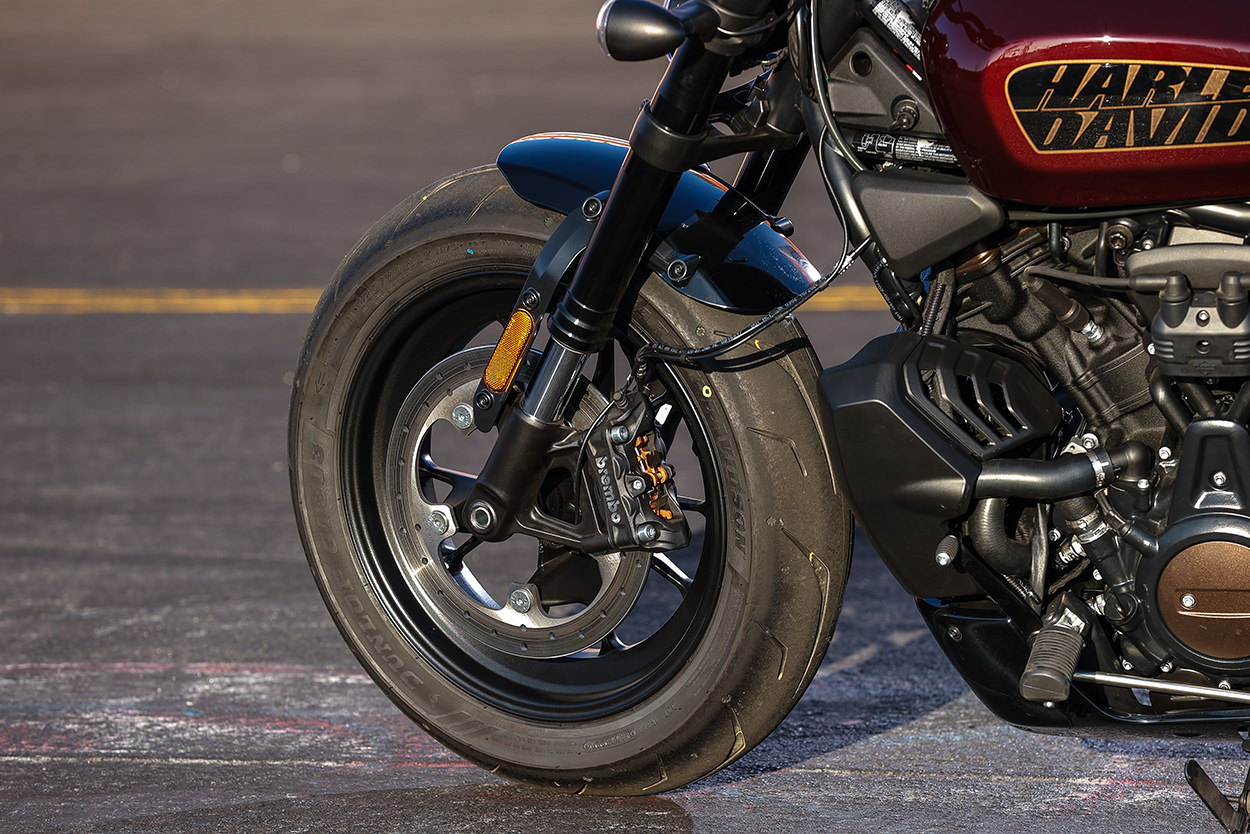 When helmets are hung and all is said and done, how does the Harley Sportster S relate to the model’s unprecedented, 64-year-old past? The new bike marks a remarkable leap forward in engineering, not to mention a dramatic departure from the visual bits and bobs that have come to define what most enthusiasts identify as a Sportster. 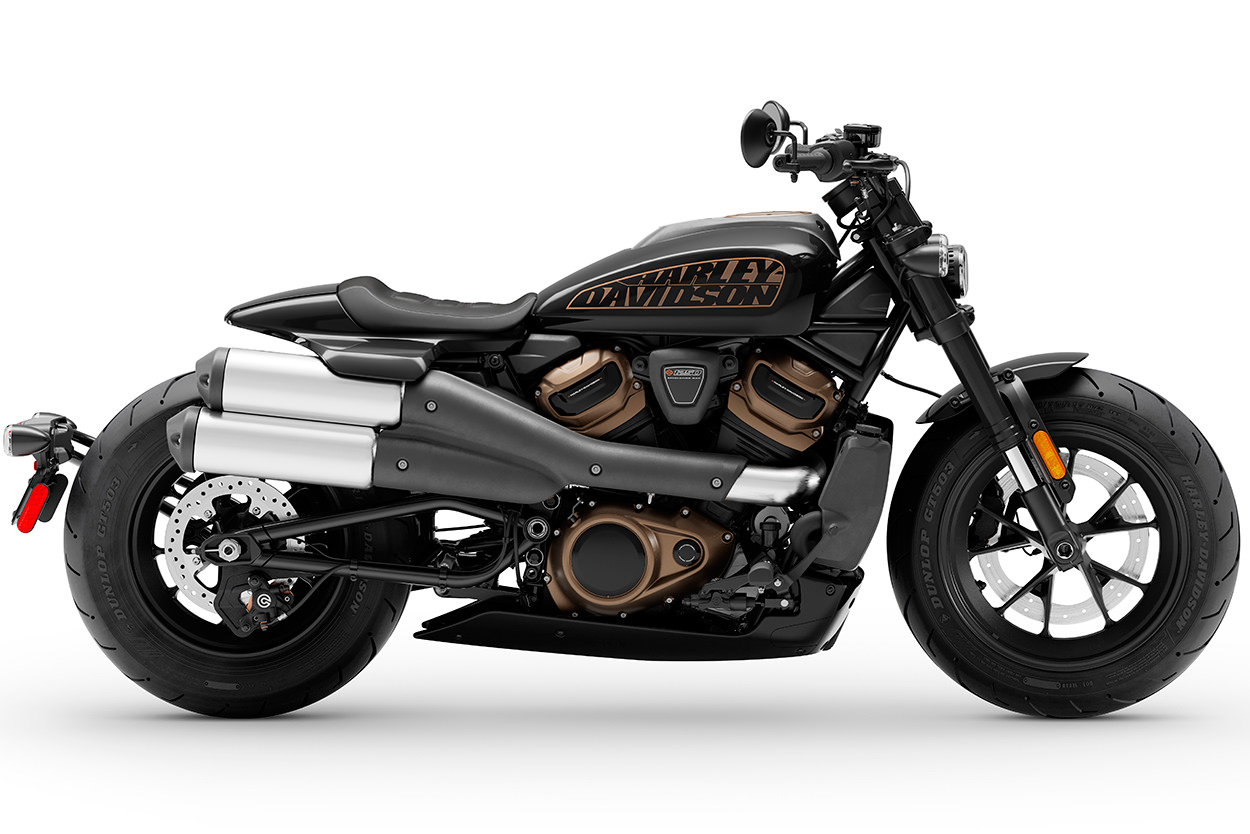 It’s a seemingly small addition, that uppercase S, but a telling signal of how Harley-Davidson is addressing its future—one that also happens to include counterintuitively nostalgic racing efforts with baggers reverse-engineered to corner with 54-degree lean angles, not to mention a lifestyle sub-brand dedicated to electrification.

The nostalgiacs of the world might dismiss the new bike as nothing more than a Sportster in name. And sure, today’s hot-rodded model is barely recognizable as the descendant of the peanut-tanked ‘57 Sportster Leo Payne obsessed over in his youth. But good ol’ Leo’s been gone for nearly 3 decades, an inevitable trajectory that will sooner or later strike the most strident of enthusiasts. 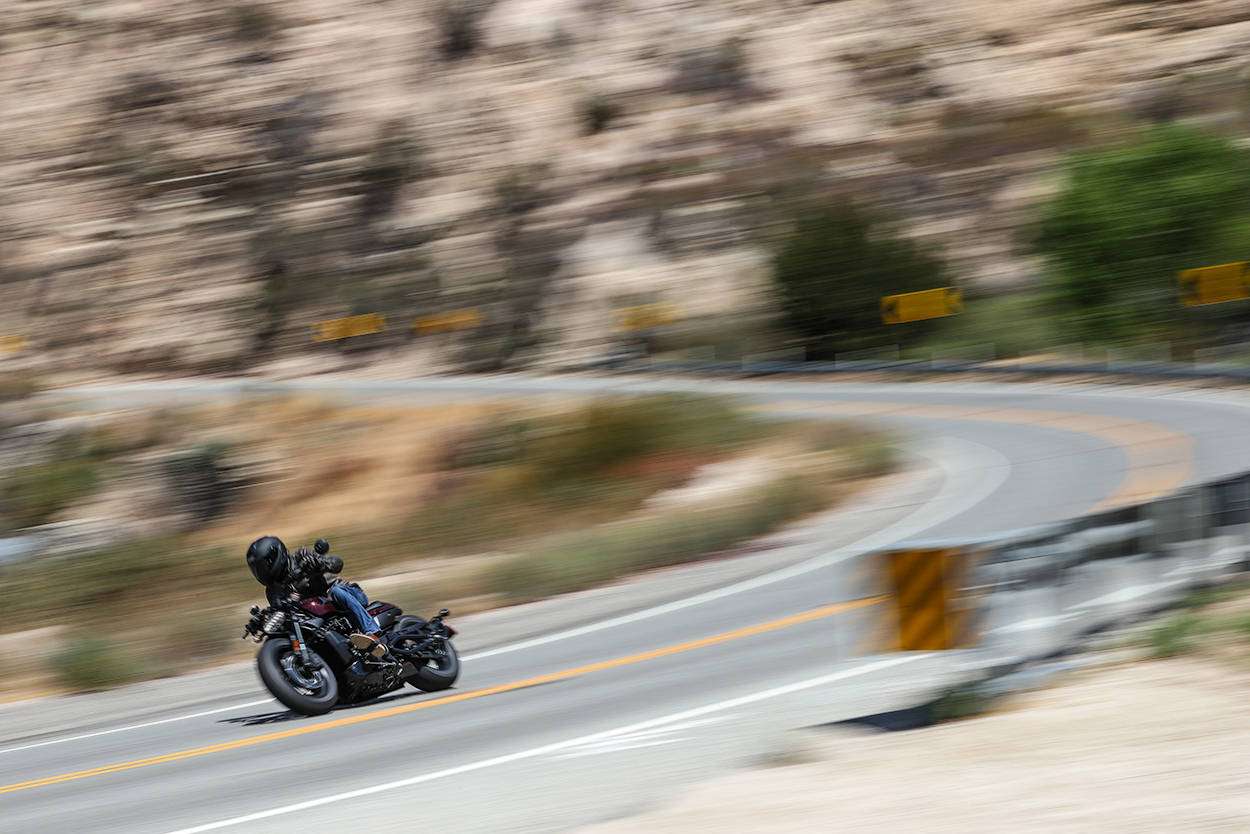 While the march of progress doesn’t make the loss of those classic Sportster lines sting any less, the bid for relevance, performance, and reliability sure makes a compelling case for reinvention. 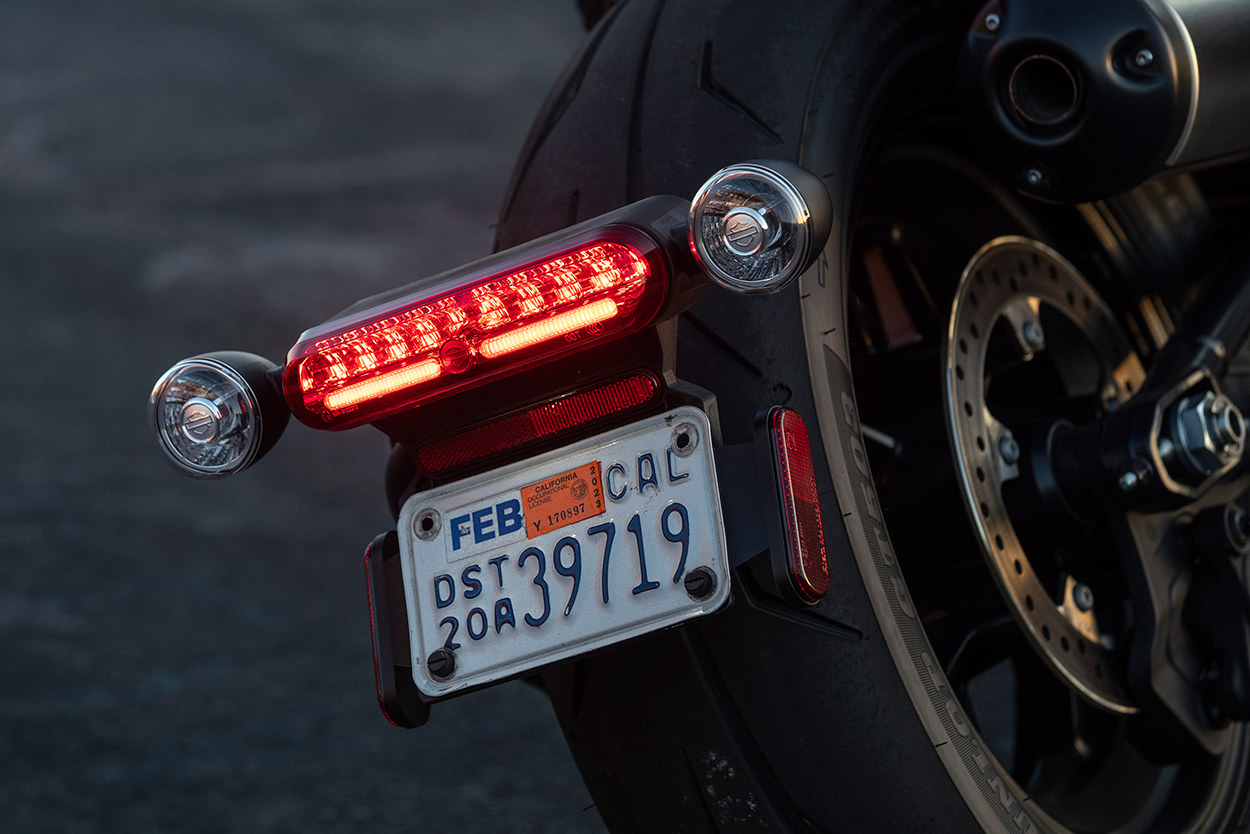