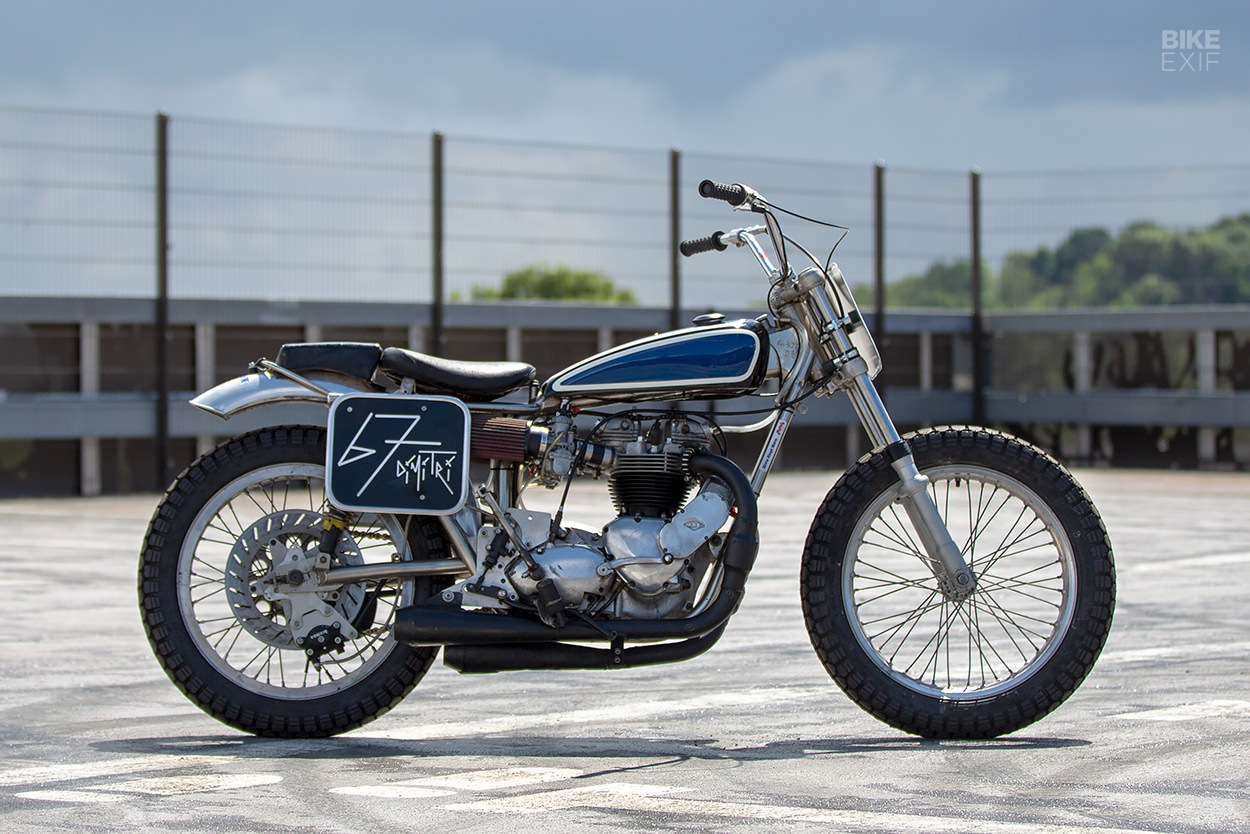 Many vintage motorcycles that get restored often end up as showpieces—ridden seldom, if at all, for fear that something might break. But if you had a bonafide classic Triumph Trackmaster in your garage, could you really leave it parked? Gareth Howes says “no.”

He’s the owner of this 1970 Triumph Trackmaster, and believes bikes should be “ridden, not hidden.” So this fully restored race bike gets regular thrashings from the most stylish man in flat track racing: Dimitri Coste. 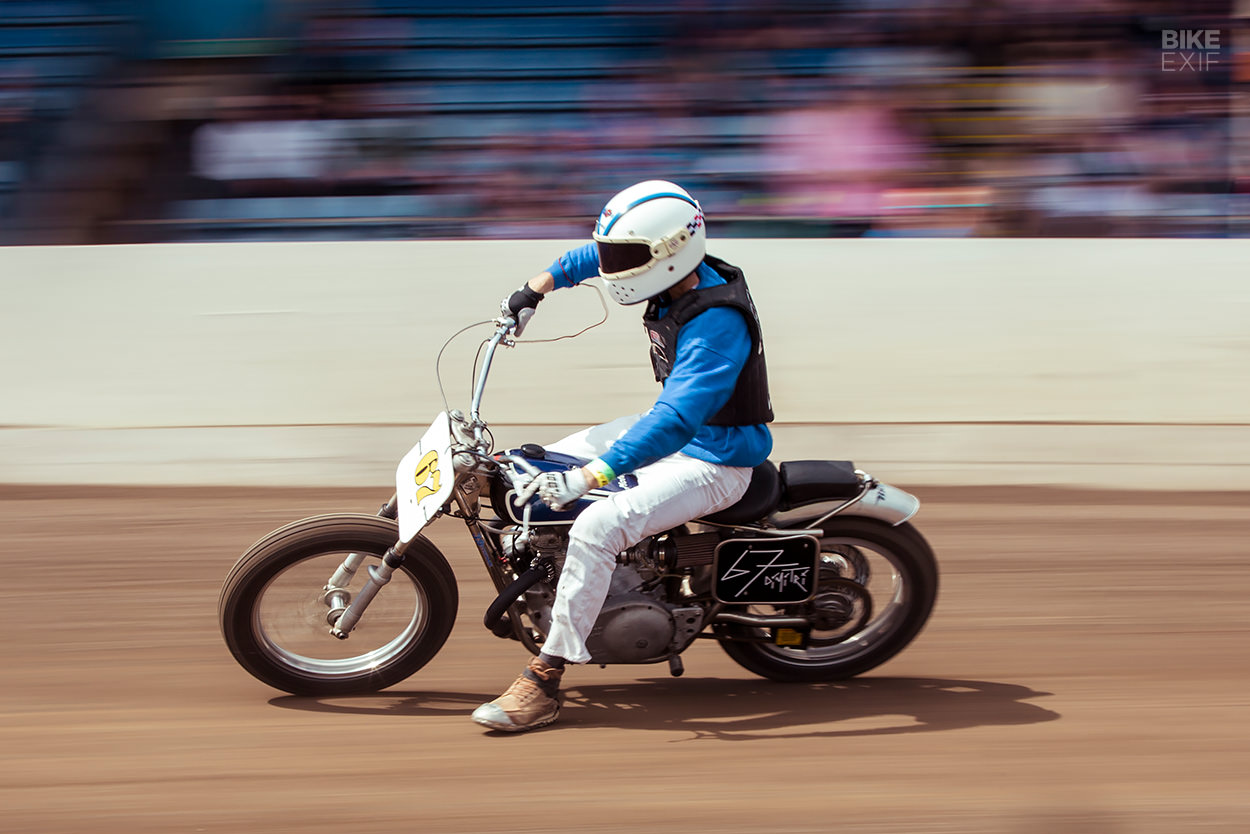 Gareth got hooked on flat track racing via the UK’s Dirt Quake events. He’s a sucker for classic race bikes and their history, so he eventually set up a company, Double Six, to source and import rare flat track parts from the USA. Which is how he stumbled across the donor bike for this project.

“I purchased the Triumph from a bike auction in America, while at a race track in England being egged on by my mates,” he tells us. “Once it had arrived, I really fell in love with the bike. After speaking to a few racers from the late 60s and early 70s, I was able to work out that it was made for, and owned by, an ex-Trackmaster employee, Gene Hartline.” 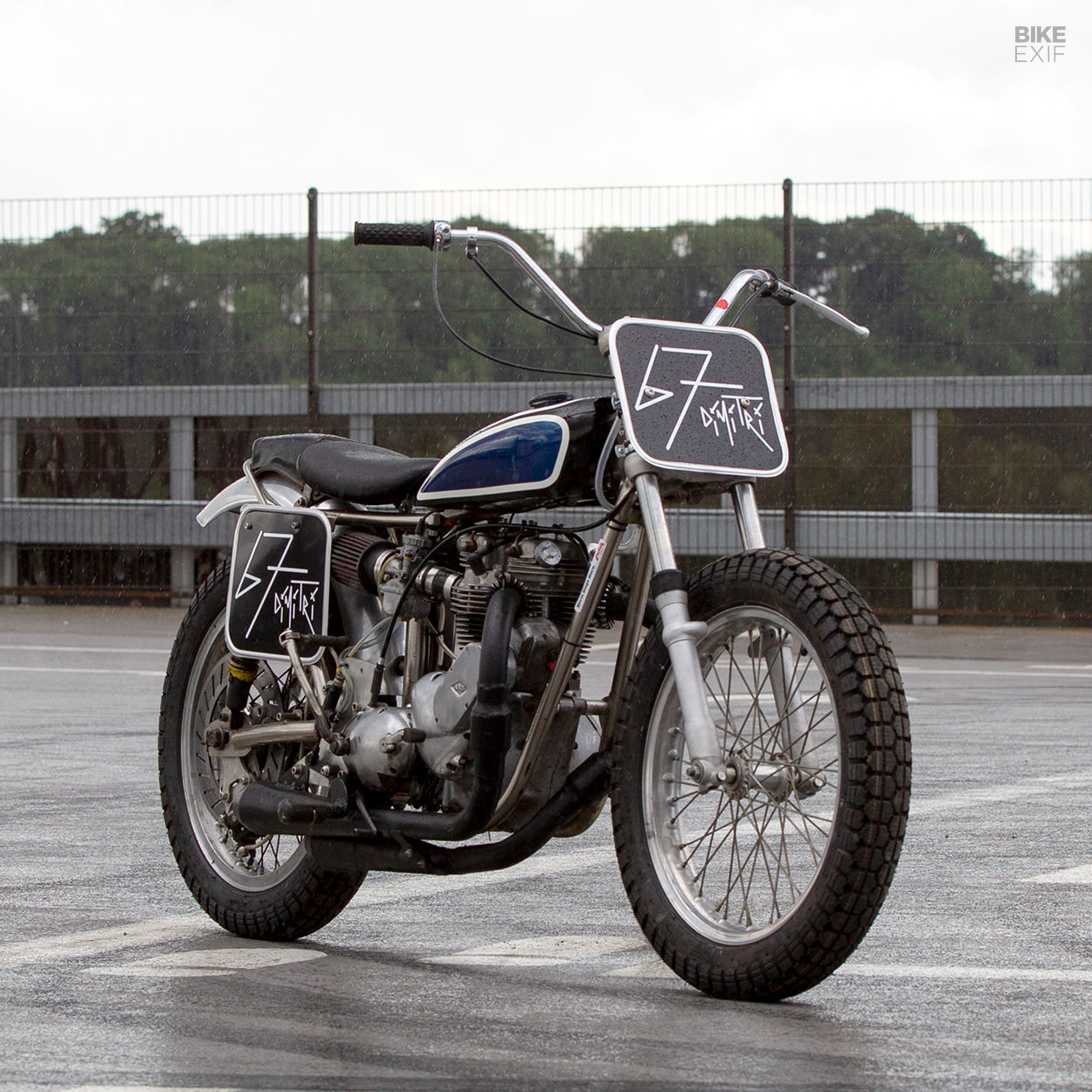 Gene passed away unexpectedly four years ago, but left a legacy behind as a highly successful Hollywood stuntman. With the Triumph’s steering neck still bearing his name, Gareth knew the bike had to be brought back to life—and raced.

So he roped in his good friend and ex-DTRA vintage class champ, Rick Bearcroft, and got to work. 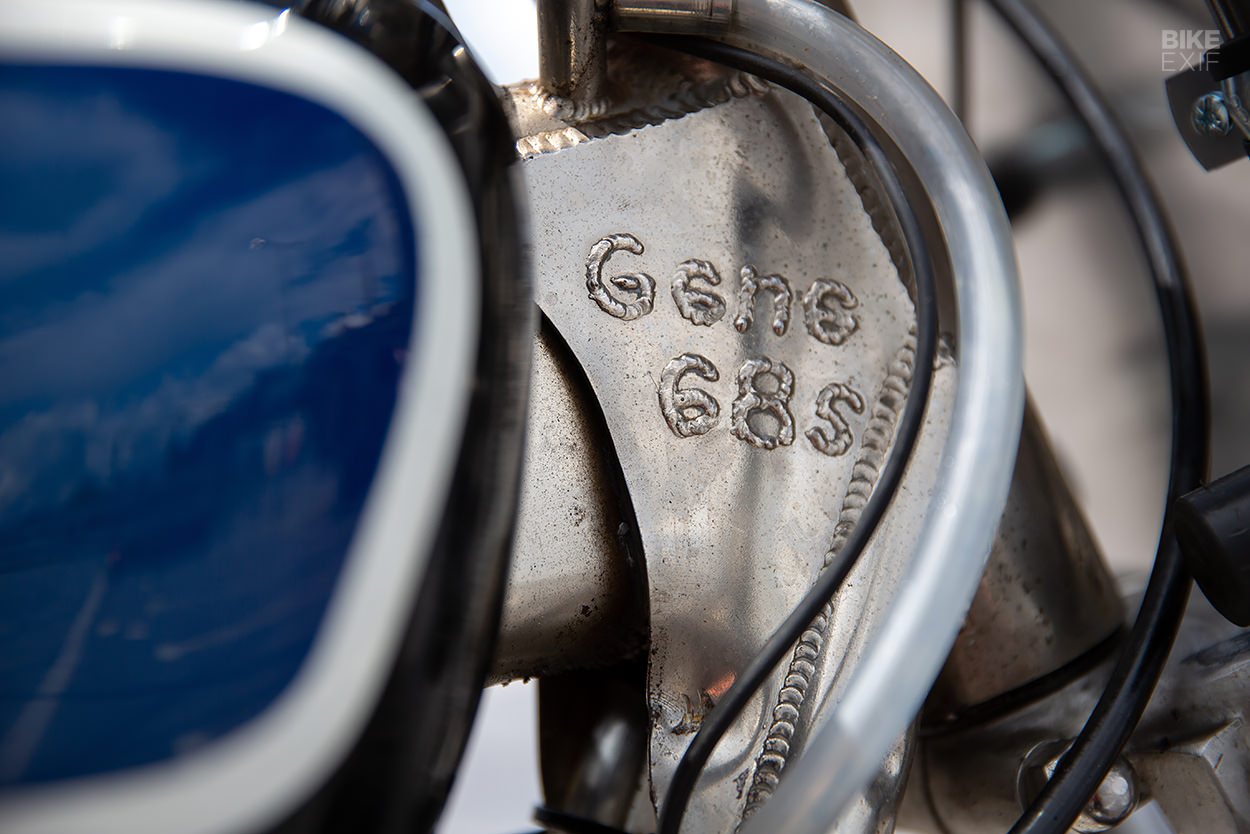 Gareth had figured out that the frame was an early model, built by the original owner of the Trackmaster company, Ray Hensley. The setup included original Ceriani GP forks and Akront rims, making this about as period correct as you can get.

The engine is a 750 Triumph twin, but its exact origin is unknown. “The engine has never been stamped,” says Gareth, “so it means it’s only ever been a race bike. It’s rumored to be one of the Triumph 750s built for homologation, so that Triumph could race in 1970.” 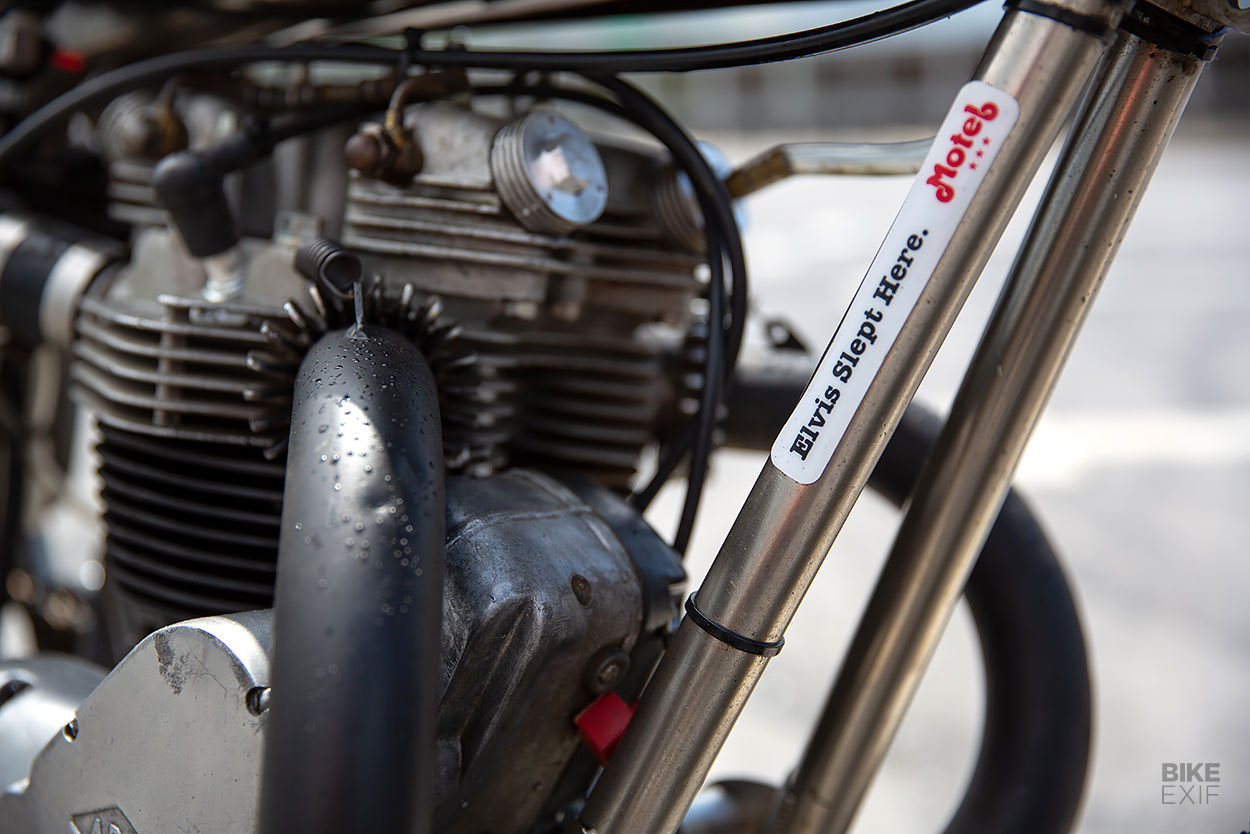 Gareth and Rick went deep on the Triumph mill, re-honing the cylinders and replacing the valves and valve guides. Then they replaced the seals and bearings, rebuilt the twin Mikuni carbs, fitted new filters and restored the ARD magneto. The engine also wears Carl’s Speed Shop covers.

Despite the extensive internal work, the guys didn’t go overboard on the outside. It’s clear that they cleaned the engine up somewhat—but they also left more than enough patina intact, including the dings in the exhausts. 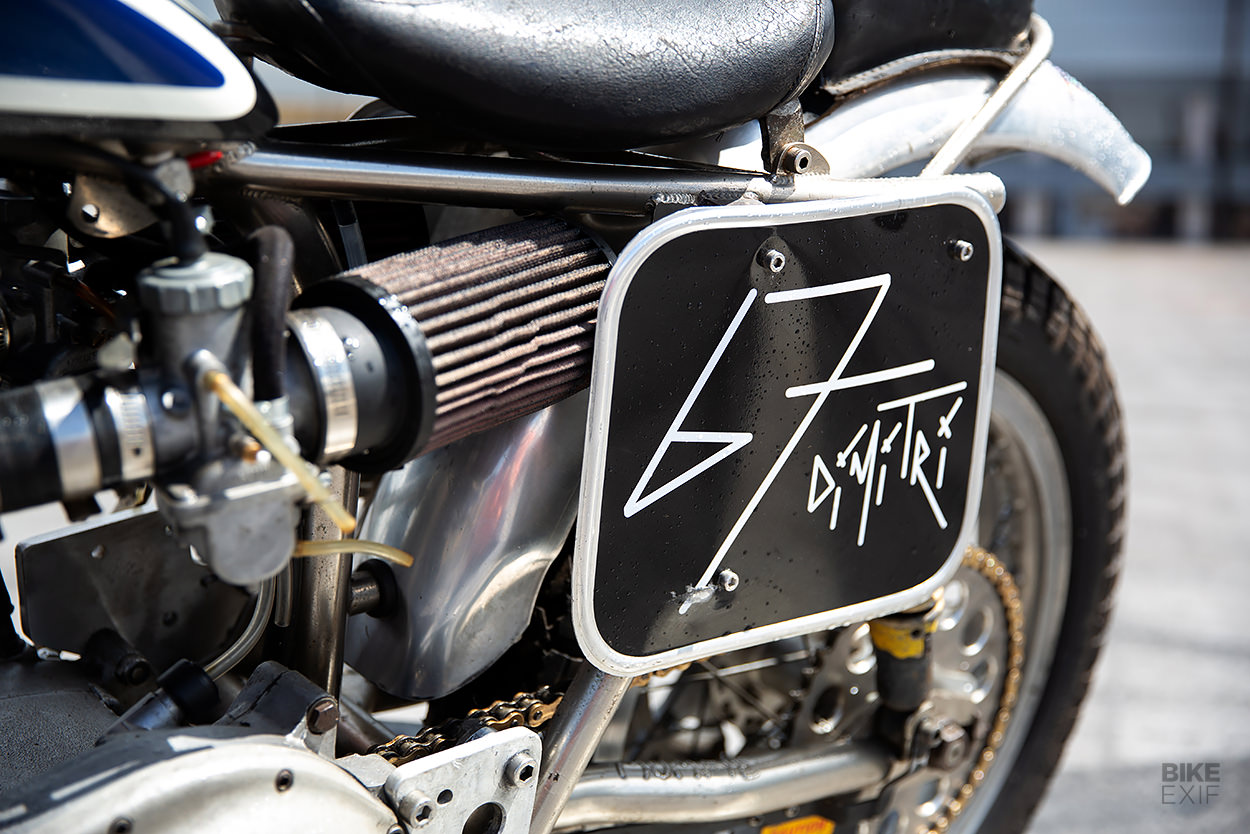 The Ceriani forks look a bit newer, because they had to be fully rebuilt with new stanchions. The Trackmaster still rolls on Akront rims, but the rear’s been re-laced to a quick-change hub. Period correct Dunlop tires keep things retro.

There is one sneaky modern part on the bike: a Brembo rear brake caliper. But otherwise, this Triumph is a true time capsule. “We kept every as original as possible, including the original plating from 1970,” says Gareth. 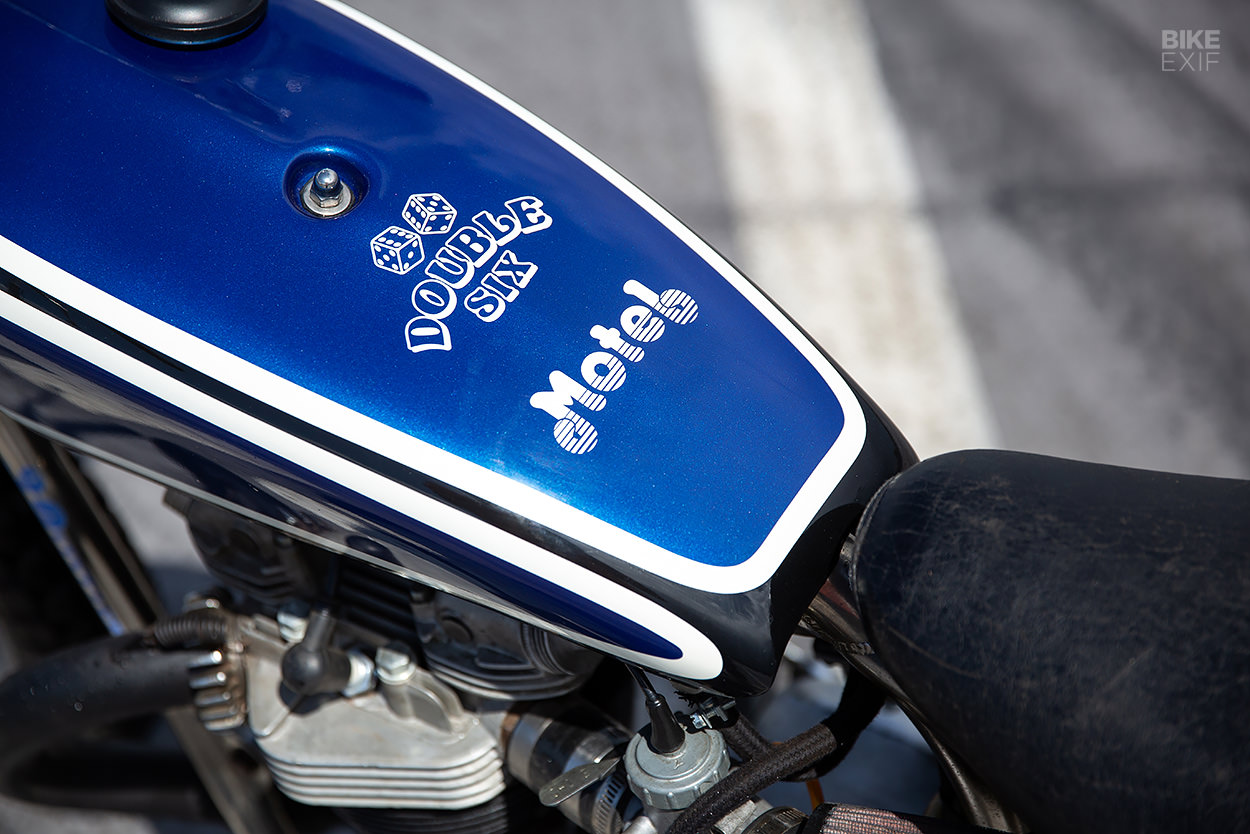 Keeping within that theme, Gareth sourced an original 1970s Cycle Works fiberglass fuel tank. The paint is new, though—and gorgeous. It was handled by Paint By Matt, who normally specializes in chopper paint jobs.

Just behind the tank is a Bates seat and passenger pad, mounted over a traditional rear fender. 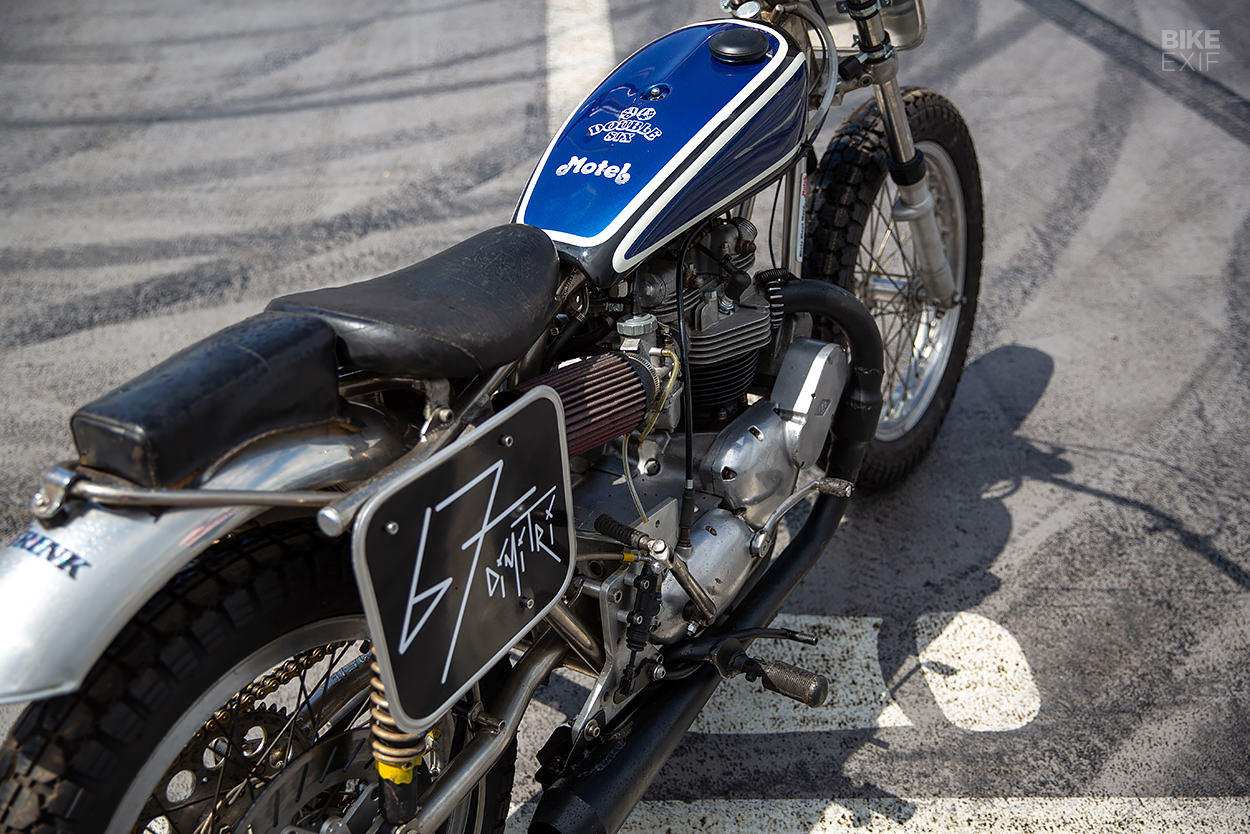 But beyond that, and the vintage flat track handlebars, there’s little else vying for attention. No front fender or brake, no lights and no speedo. “This bike is a keeper that’s not going anywhere but to tracks to race,” confirms Gareth.

That’s exactly why he reached out to accomplished photographer and vintage flat track racer, Dimitri Coste, to pilot the Trackmaster. “If you’ve ever seen Dimitri ride you’ll remember him. He has a great style, with wide and wild being his signature on the track. Even with a slipping clutch on starts and gearing being way out, we bagged a third first time out.” 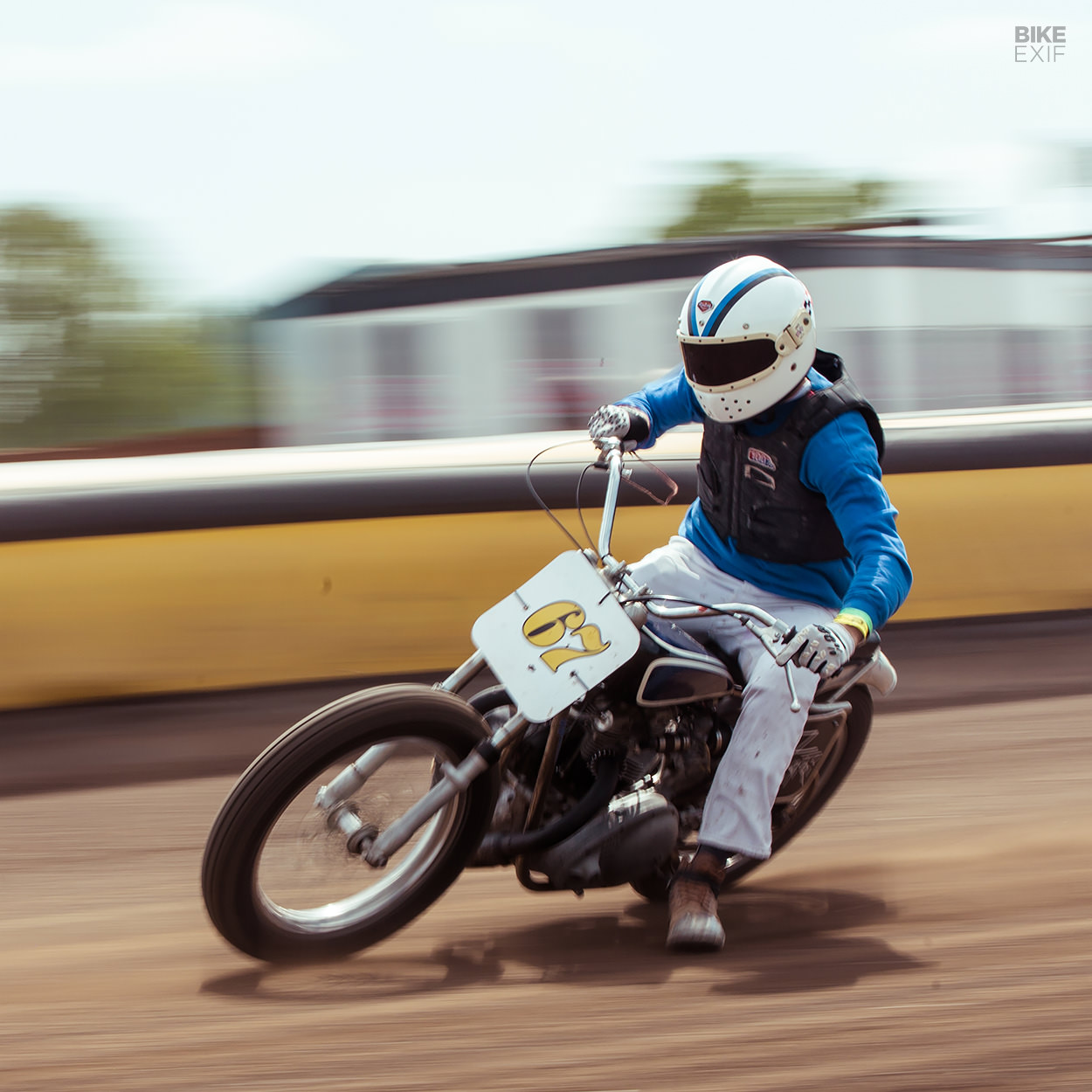 So what’s next for Double Six? Apparently there’s a 1930-model Harley-Davidson Model V already on the bench. And yes, it will be raced. 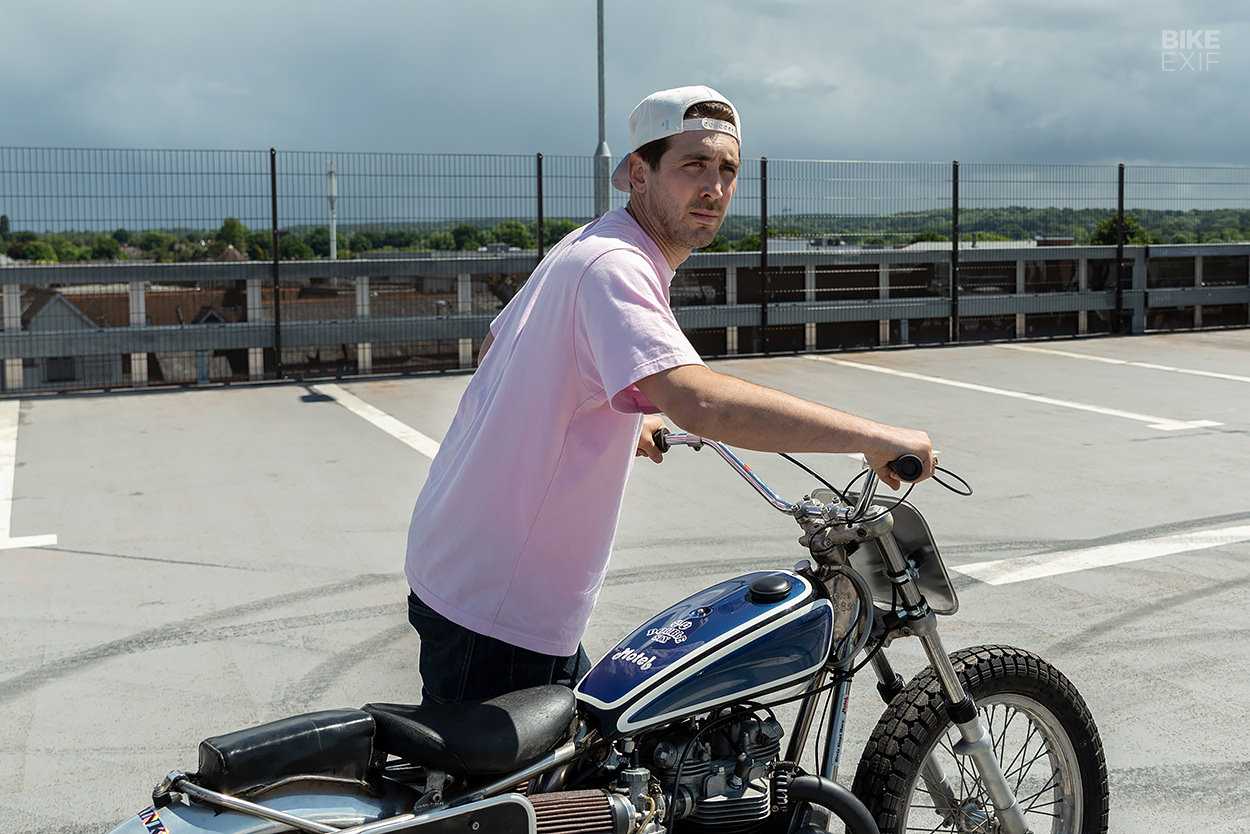