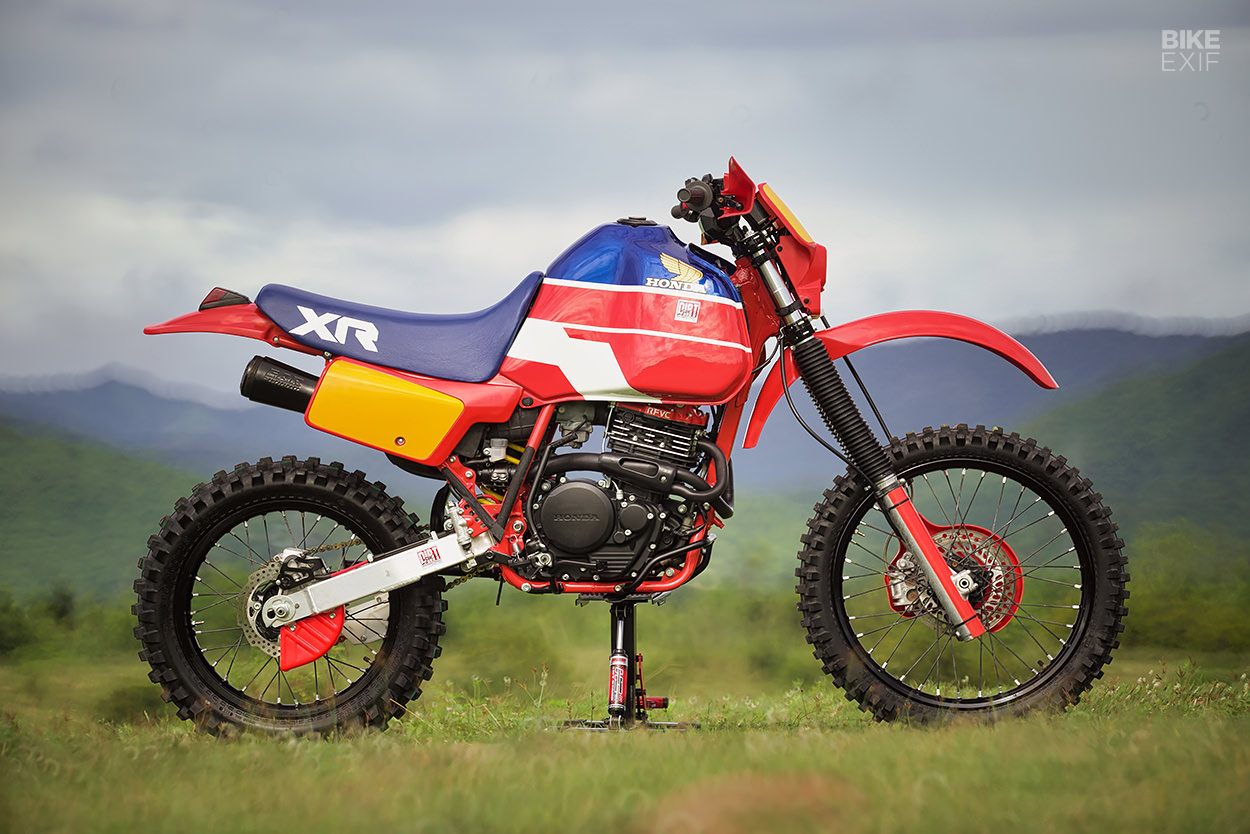 There’s a 295-pound Honda XR600R hanging on the wall at Dirtshop Thailand, in Bangkok. Made in 1990, it’s the actual motorcycle that introduced shop owner Ek Chalermphol to dirt biking.

It’s also the bike that prompted him to open his workshop with a friend, 30 years ago. So Ek has now honored this inspirational machine, and Honda’s desert racing legacy, with a stunning throwback build—an XR600R restomod. 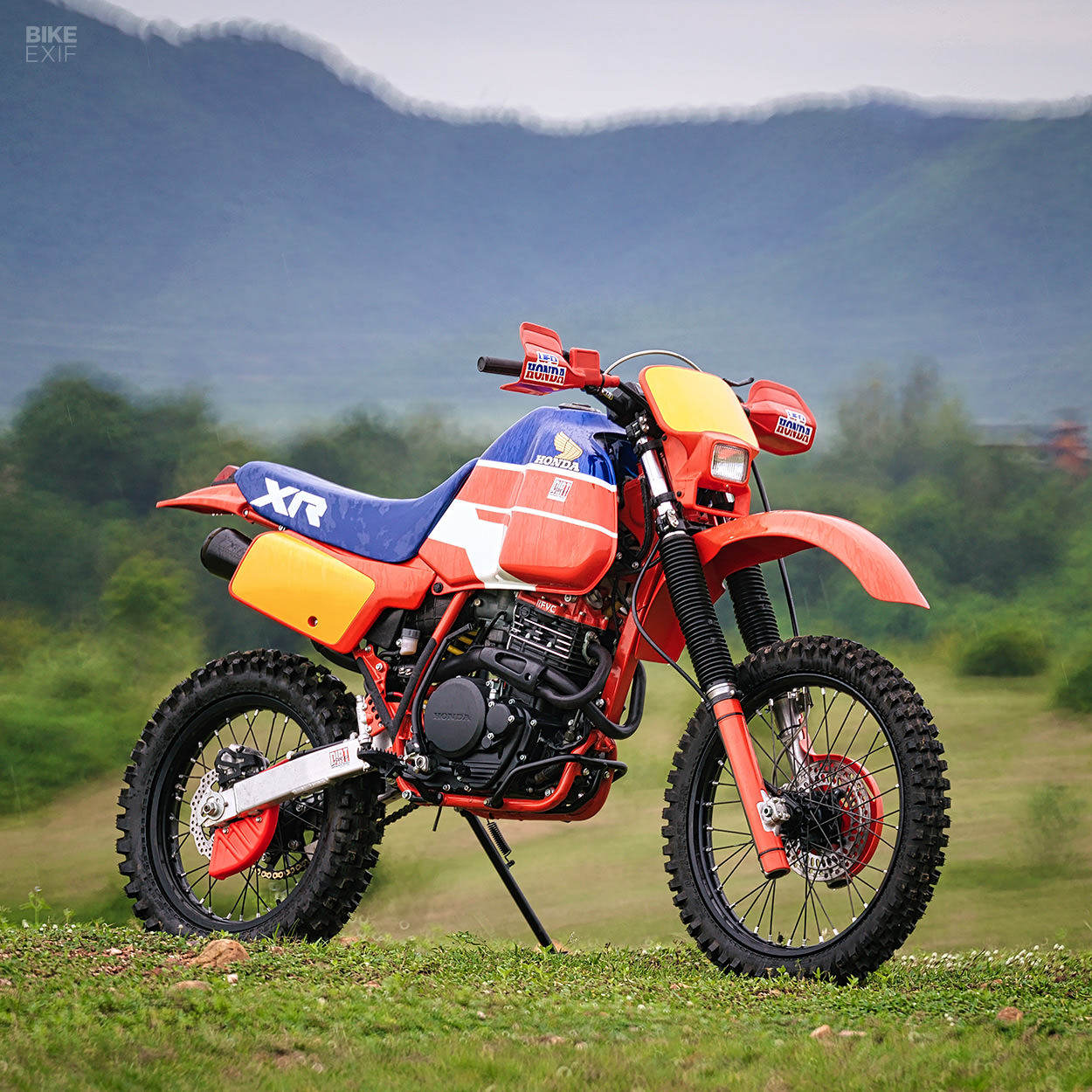 Ek has a deep love for historic off-road racing and a sharp eye, as proved by the R nineT Urban G/S he built last year. This latest project pays homage to Honda’s XR and XL models of the 1980s, and its Dakar race bikes…with inspiration coming from custom builder on the other side of the planet.

“When I first saw Andrew Greenland’s XL600R it stunned me,” Ek tells us. “I wanted to build one so badly, but with my beloved XR600R model instead. So I started looking around to find a bike and parts.” 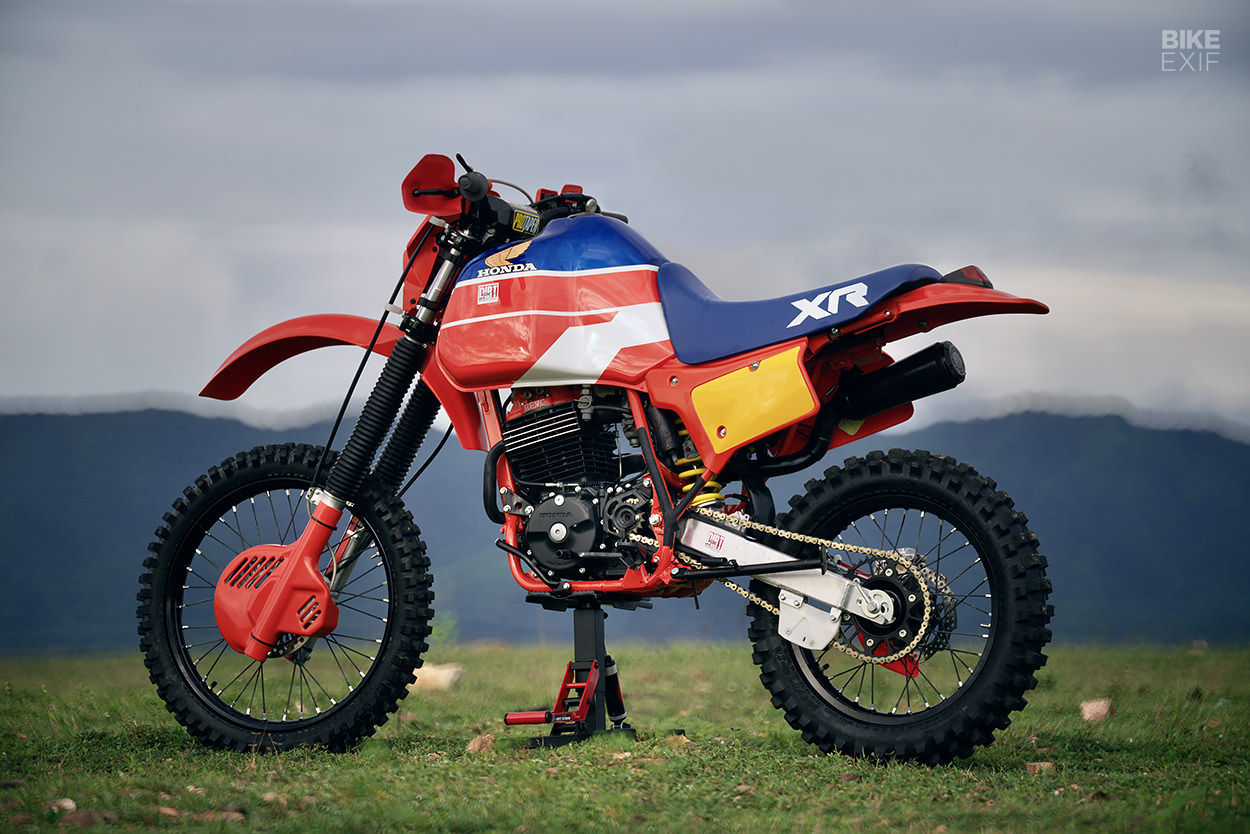 Ek’s build doesn’t follow Andrew’s to the letter, but it does pull parts and design touches from the same legacy Honda models. And while Andrew’s bike was a XL model with a Honda Dominator motor, Ek’s is a XR600R through and through.

It’s not the same bike that’s hanging on the shop wall though. Ek couldn’t bear to cut into his first love, so he sourced a 1996 model. With help from Dirtshop’s resident mechanic, Wichan Phikulthong, Ek stripped the bike down and got to work. 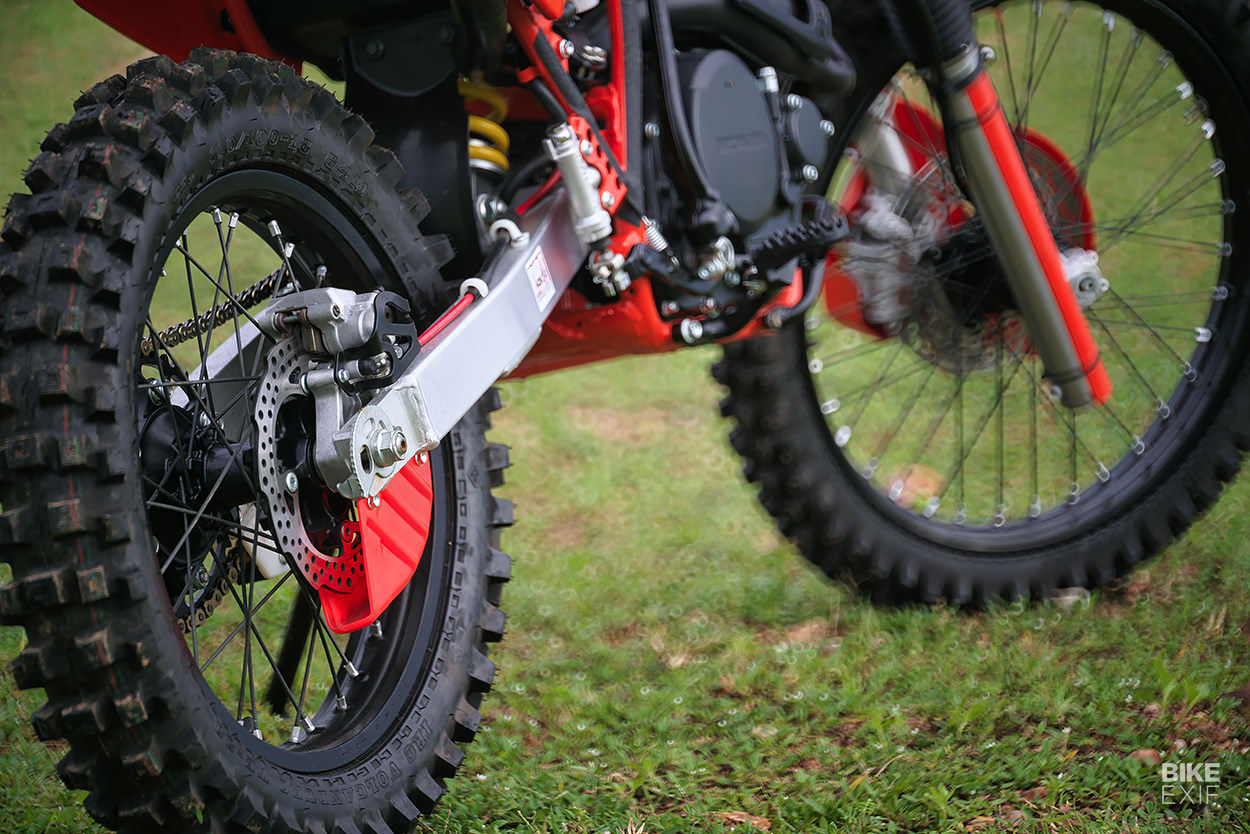 The idea here was build a retro machine—so this scrambler is devoid of any modern parts. The original wheels, suspension and brakes were all overhauled and refreshed, and the engine was rebuilt with OEM parts. Everything’s been repainted too, so this XR looks box fresh.

One of the biggest visual hits is the Honda ‘Flash Red’ theme. Ek had the frame and the engine’s top cover done in red, going so far as to import the powder for the powder coating from the US. 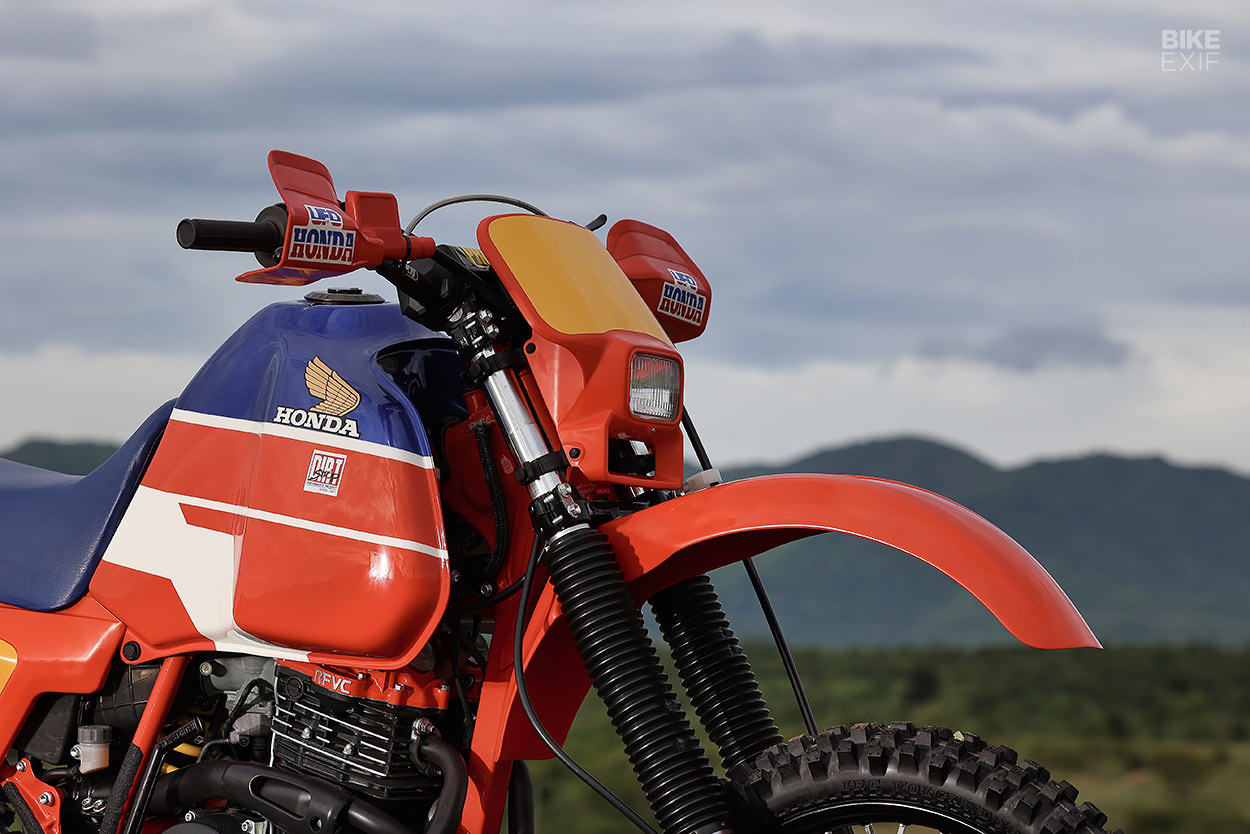 He also swapped the plastics with original 1983 Flash Red Honda XR items, which turned out to be one of the hardest, and most expensive, parts of the project.

“It is rare to find OEM plastics in Flash Red,” explains Ek. “I tried to get them from many places, and finally got most of them from a guy in Europe, and a side panel from someone in the US. They are used OEM parts, but with a very high price tag.” 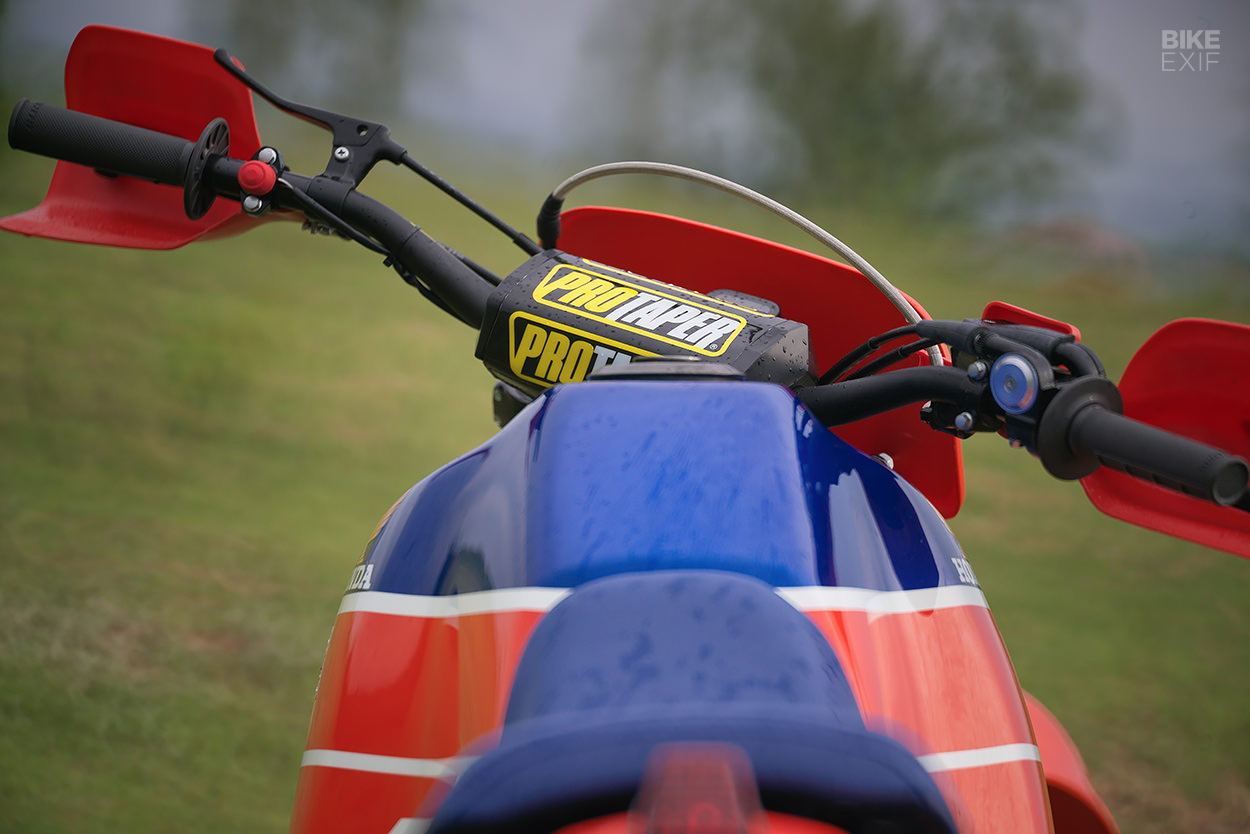 Ek goes on to explain that the full kit cost him almost $2,000—where the same plastics in white would have only set him back $400. He simply couldn’t find original red Honda hand guards though. So, after a year of searching, he settled for UFO Plastics replicas from a vintage bike collector in the UK.

The bodywork only took minor fettling to fit, particularly the rear fender. The 96-model XR600R also has a different airbox setup to what Honda used in the 80s, so Ek had to make sure he had all the right parts to fit the left side cover properly. 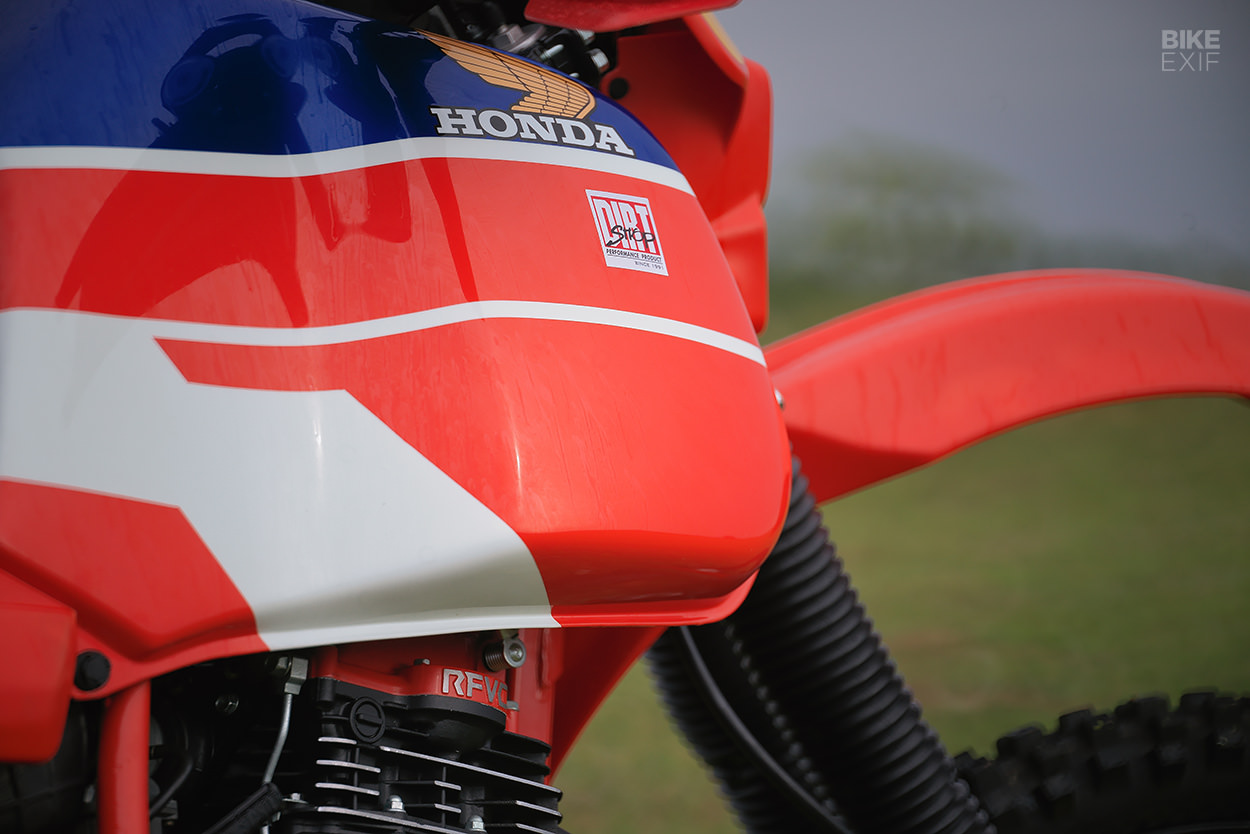 The fuel tank’s another special find: it’s from an ultra-rare 1980s Honda XL600LM, found at a spares dealer in Europe. Ek fitted it by welding an original XL600LM tank bracket to the XR’s frame up front, and adding an additional aluminum bracket at the back. The LM tank itself managed to go unmolested.

Other add-ons include new fork boots, period correct brake protectors, and a sweet blacked-out SuperTrapp exhaust. Ek fitted oversized ProTaper bars with Renthal grips too, along with an OEM replacement speedo and levers, sourced from Japan. 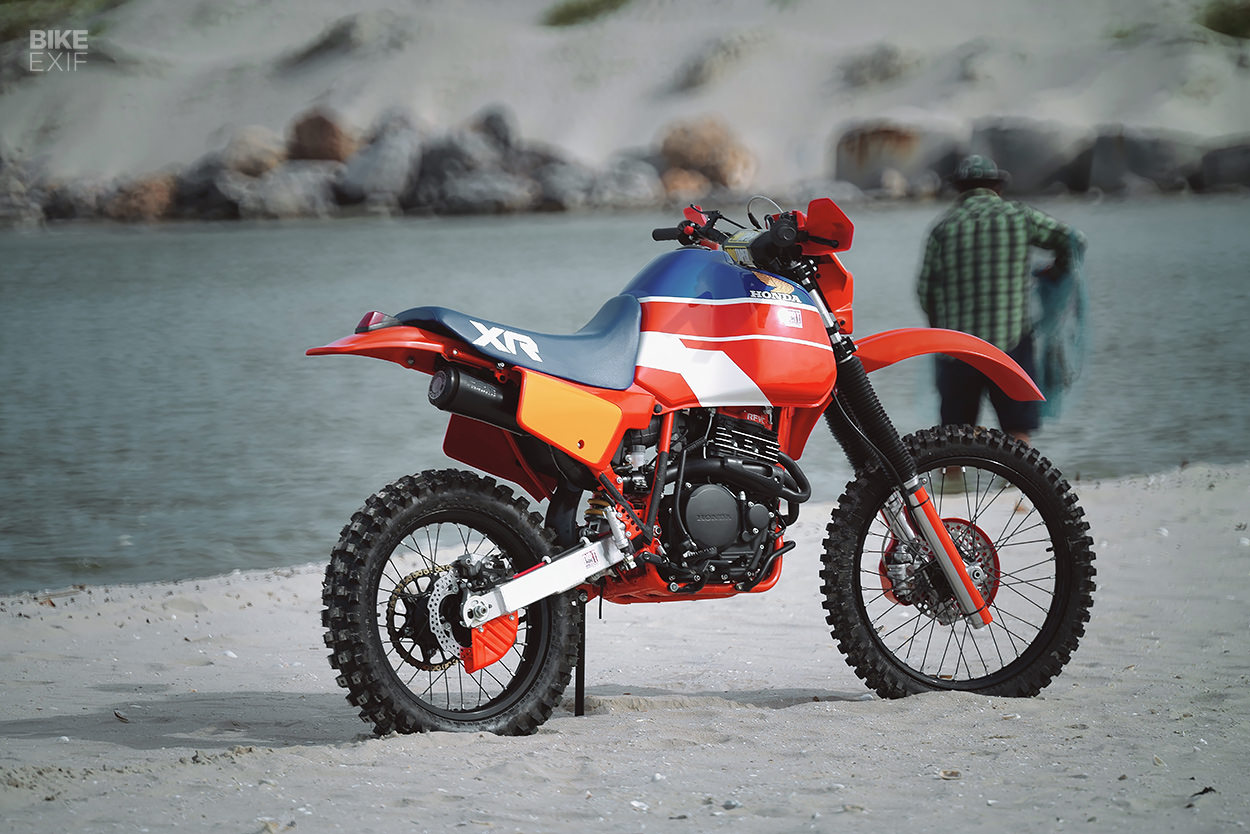 Taking inspiration from 1980s Honda desert racing liveries, but adding his own twist, Ek sketched out a retro-fabulous new paint job for his XR—using his iPhone. It looks stunning, and is complemented by a blue leather seat cover with a classic ‘XR’ logo.

He might be 50 years old, but Ek still spends his weekends tearing up trails with his friends—just like he used to on his first Honda. “I rode hard on my 1990 XR600R those days,” he recalls. “I gained a lot of experience on how to ride a proper dirt bike… it was my passion!” 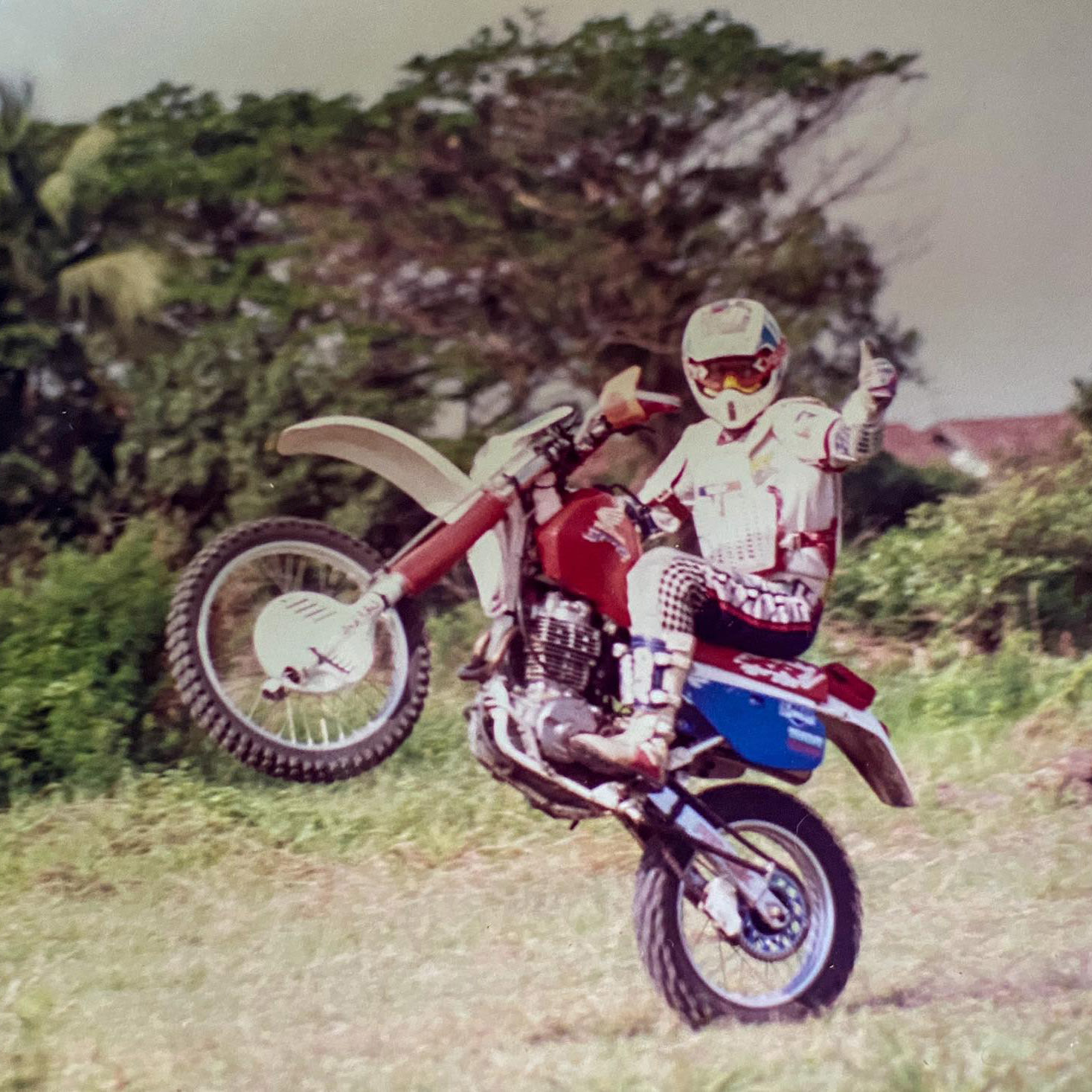 These days, Ek mostly rides modern Husqvarna or Gas Gas machines. This new build had to be one hundred percent thrash-able, and able to keep up with its younger stablemates. Because while Ek’s first XR is still hanging on his shop wall, he’s wasted no time in getting his new one dirty. 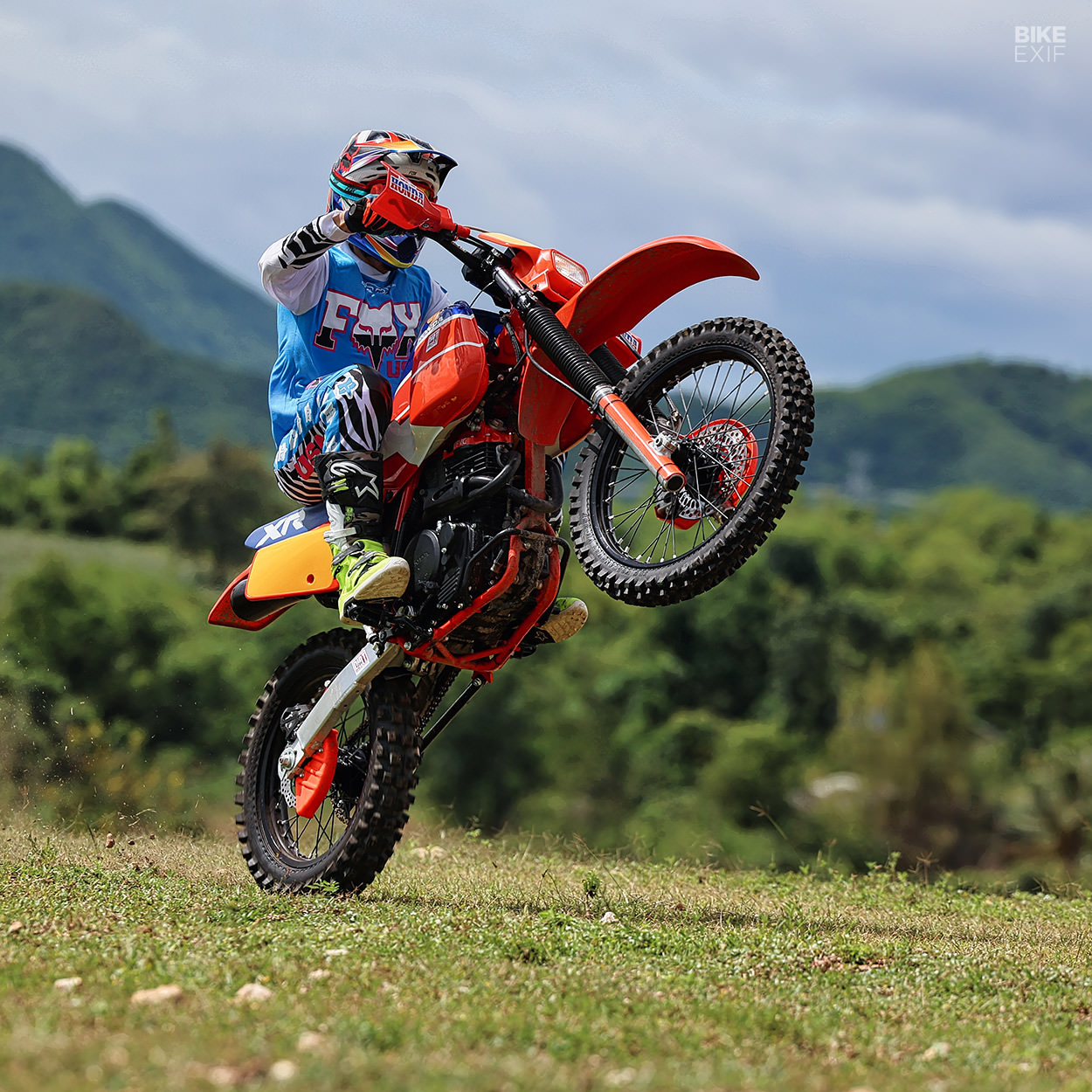