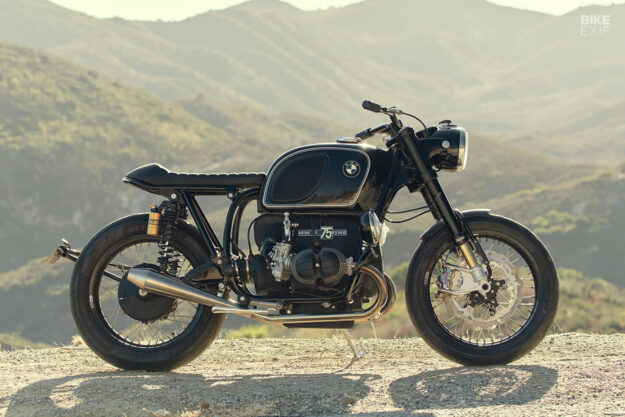 Calling Robert Sabel a purist would be missing the point. His Los Angeles-based shop, Roughchild Motorcycles, works exclusively on BMWs, without ever straying too far from their original aesthetics. But their builds are more than just restoration jobs; they might look vintage on the surface, but they’re loaded with stealthy modern upgrades.

“We sympathetically combine the latest technology with classic aesthetics,” explains Robert. Now Roughchild has pushed that philosophy to the limit, by taking their signature RSWB (Reisesport Short Wheel Base) design and kitting it with every upgrade in their arsenal. The build combines a 1970 BMW R75/5 chassis with a 1993 BMW R100R engine, and it’s an absolute stunner. 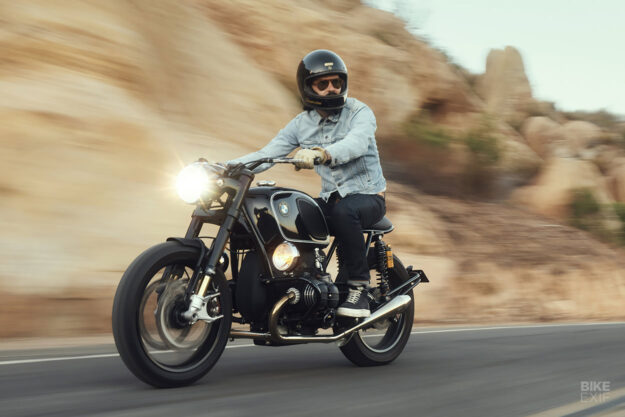 “This bike is a love letter to the airhead,” says Robert. “Yes, it’s custom, but done in such a way that it honors the original design in a refined manner. We’re not looking for extreme, we’re aiming for extremely refined, with a focus on safety, compliance and reliability.”

“In this instance, we’ve taken the earliest frame and put the latest engine in it, a cool 23 years apart. Then incorporated top of the line suspension and brake components to make the extra power usable all of the time. Modern electronics on an entirely rebuilt and upgraded drivetrain optimize the experience.”

One look at this build’s spec sheet proves that Robert isn’t overstating things. There isn’t an inch of this airhead that hasn’t been improved in some way—starting with its engine. Roughchild rebuilt it with long connecting rods and short skirt high compression pistons, supplied by Moorespeed in the UK.

They also performed a twin-spark ignition conversion, added classic peanut valve covers and installed a racing clutch with sintered plates. The carbs are Dell’Orto PHM40s, hooked up to the original airbox. And the exhaust system is a combination of stainless steel headers, and Cone Engineering mufflers. 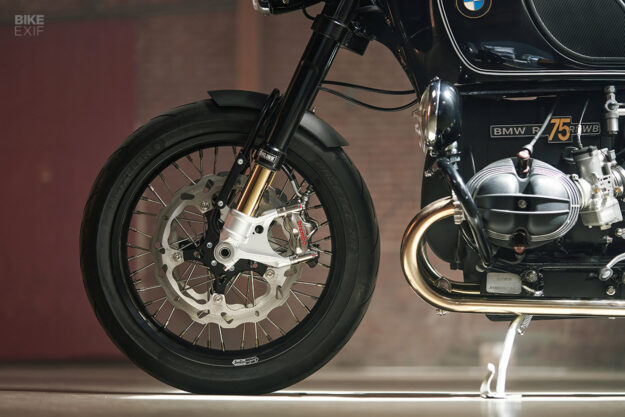 Moving to the suspension, Roughchild upgraded the front end with a set of Öhlins FGRT forks, held in place by a set of custom-machined yokes. A pair of Öhlins Blackline shocks prop up the rear.

For the wheels, the crew laced 18” Sun rims to custom aluminum hubs with stainless steel spokes, then wrapped them in Metzler RaceTec tires. The rear wheel is offset to accommodate the 3.5” wide rim, and now sports a disc brake assembly. Nickel-plated Brembo GP4 calipers do duty at both ends. 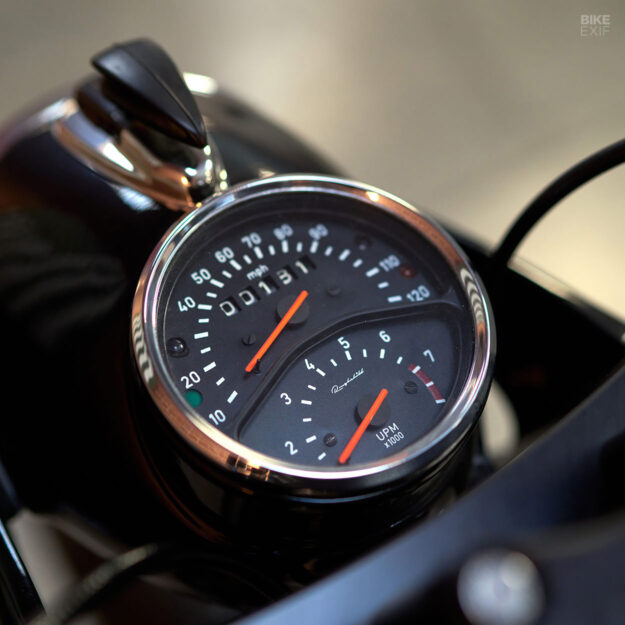 Most of this build’s key body parts were scalped from various classic R-series BMWs. The headlight bucket is a /5 part, complete with its original light switch and its recessed speedometer and tachometer. Roughchild converted the tacho from mechanical to electronic, since the newer R100R motor doesn’t have a tach drive. 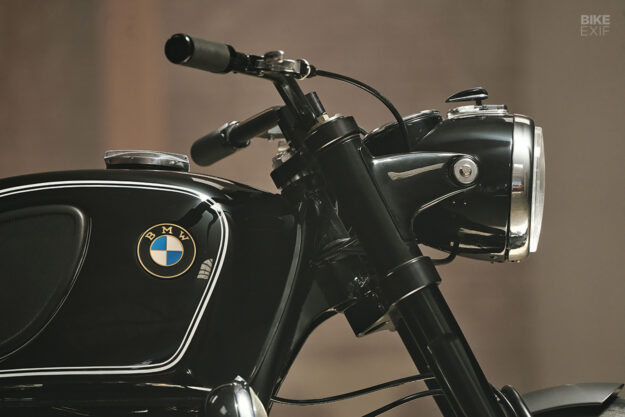 The fuel tank comes from a /6 BMW, and has been repainted in Avus black with traditional white pinstripes. It’s adorned with a traditional gas cap and vintage BMW roundels. Tucked underneath it is the front brake master cylinder, and a Lithium-ion battery in hand-made box.

Sitting further back is a custom seat, finished in Alcantara and vinyl, with a tidy café racer-style hump. It sits on a custom bolt-on subframe, with an LED taillight and turn signal strip Frenched into the back. 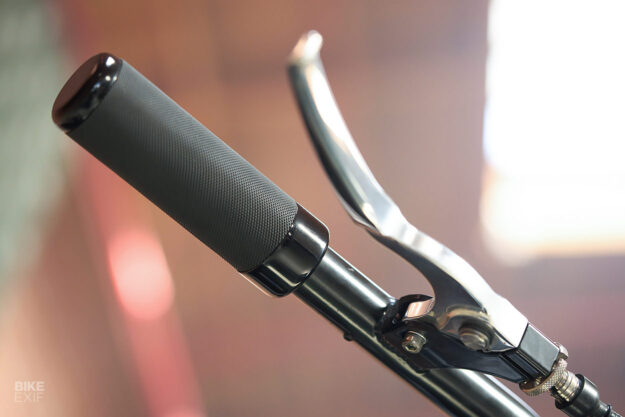 There’s more slick stuff happening in the cockpit, where Roughchild paired a set of custom-built handlebars with black anodized risers. Micro-switches are embedded into the edges of the grips, and the throttle runs internally. The brake and clutch levers are welded directly to the bars.

All the wiring’s been run inside the bars to keep everything super sano. Roughchild rewired the bike too, around Motogadget’s ubiquitous mo.unit control box. 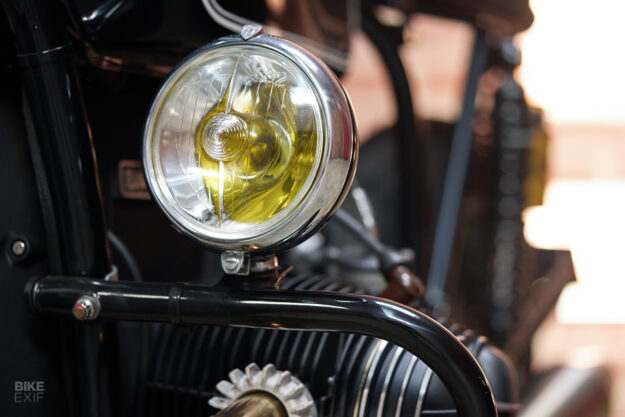 Lower down you’ll find a pair of Marchal fog lights, mounted to a set of classic BMW crash bars. They’ve been wired to operate at 60 percent brightness when on, and to flash brighter on the appropriate side when engaged, effectively operating as turn signals.

Rounding out the street legal bits is a swingarm-mounted license plate bracket at the back. 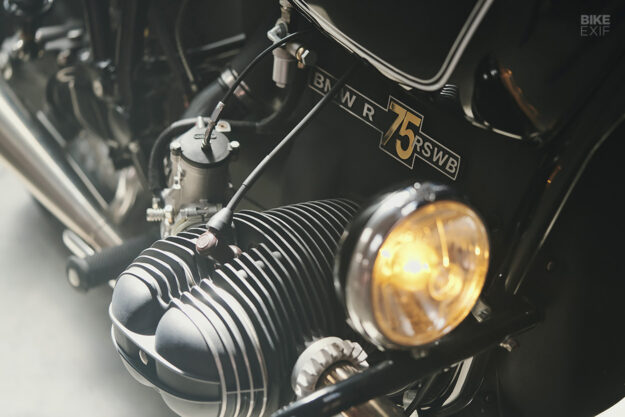 Robert’s obsessive attention to detail can be found throughout this RSWB build. The classic BMW paint job is attractive enough on its own, but the way the gold suspension parts are complemented by the tank roundels and custom engine badges is beyond tasteful.

Every last fastener was swapped out for a high-end ARP part, with subtle Roughchild logos sprinkled throughout the bike. 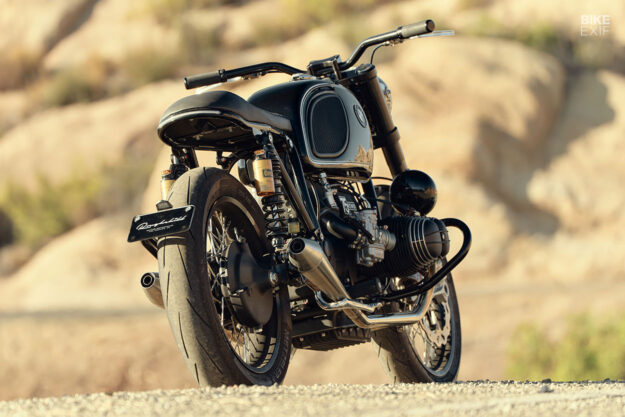 This version of the LA shop’s RSWB series is not only an effective showcase of what’s they’re capable of, but a testament to how timeless and iconic the venerable boxer is. It’s done so well, it might even make purists smile.