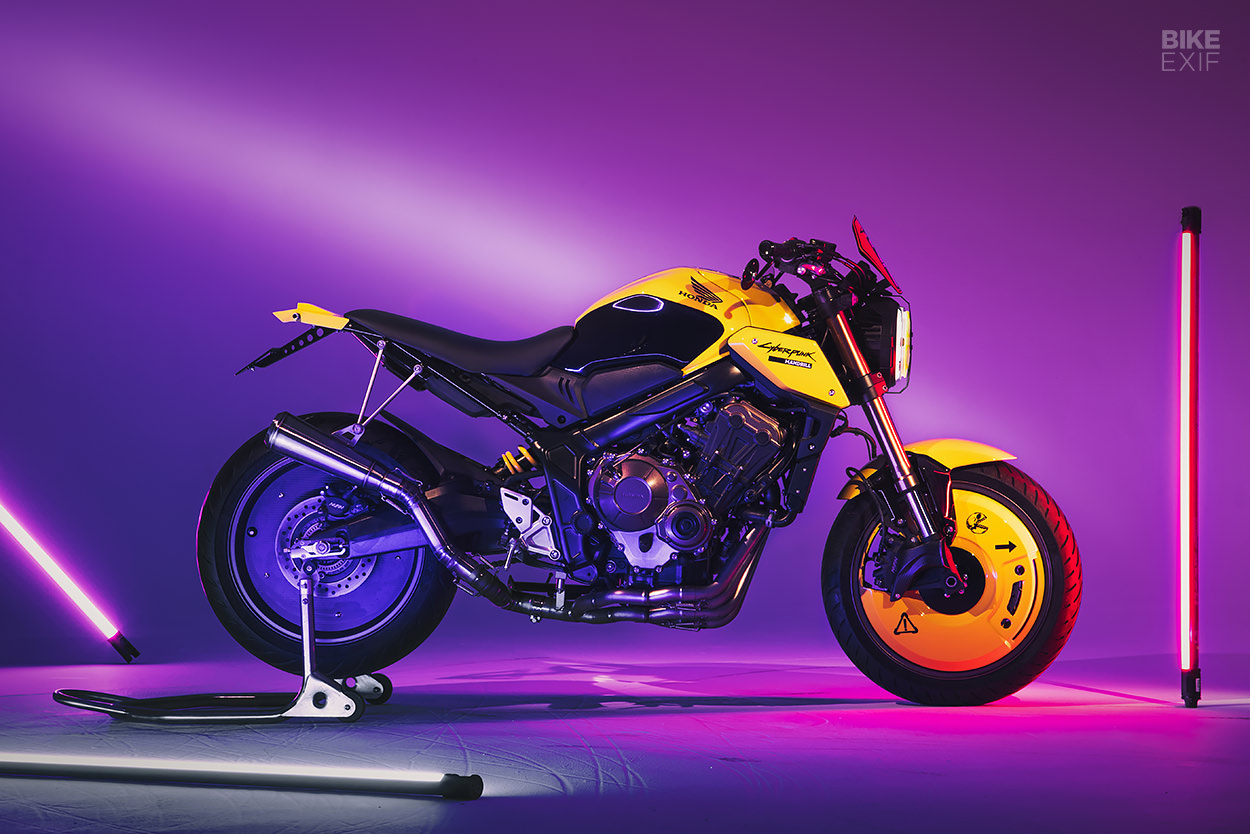 Ever ridden a motorcycle in a video game, and wished you could ride it in real life? Meet Mandrill Garage’s latest custom build: a bright yellow Honda CB650R, inspired by the Arch Motorcycle Method 143 in the video game, Cyberpunk 2077.

Mandrill are based in Beijing, China, where they run a restaurant and bar alongside their workshop. They’ve opened a satellite location in Shanghai too, and their interests extend further than just motorcycles. 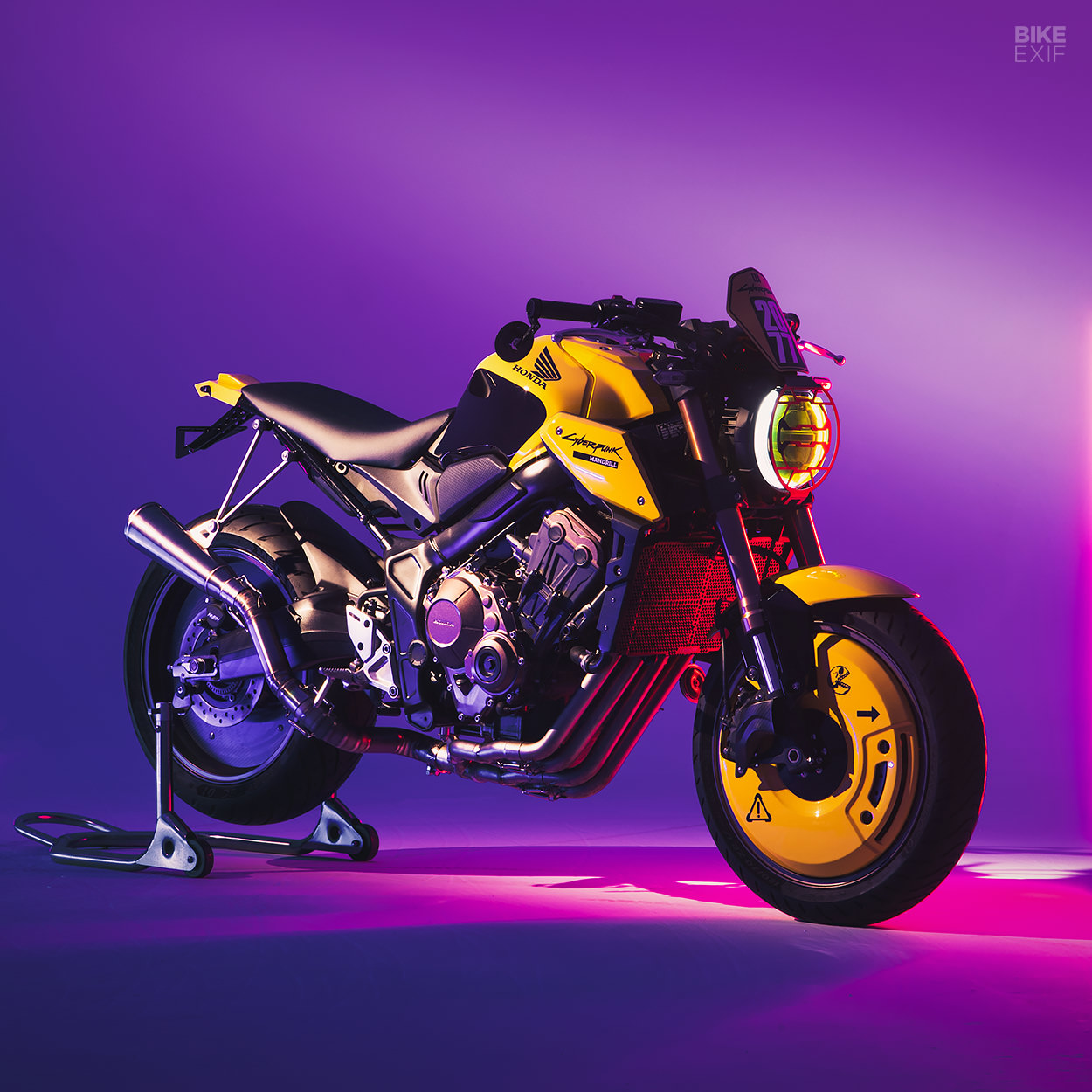 “The concept of Mandrill is to ‘do interesting things’,” explains shop boss, Luo Hao.

“We design modified motorcycles, travel videos, cocktails and clothes. We just made a whiskey with a winery in Alaska, using ice from the Arctic glacier. Think of something interesting, and we’ll go back and do it.” 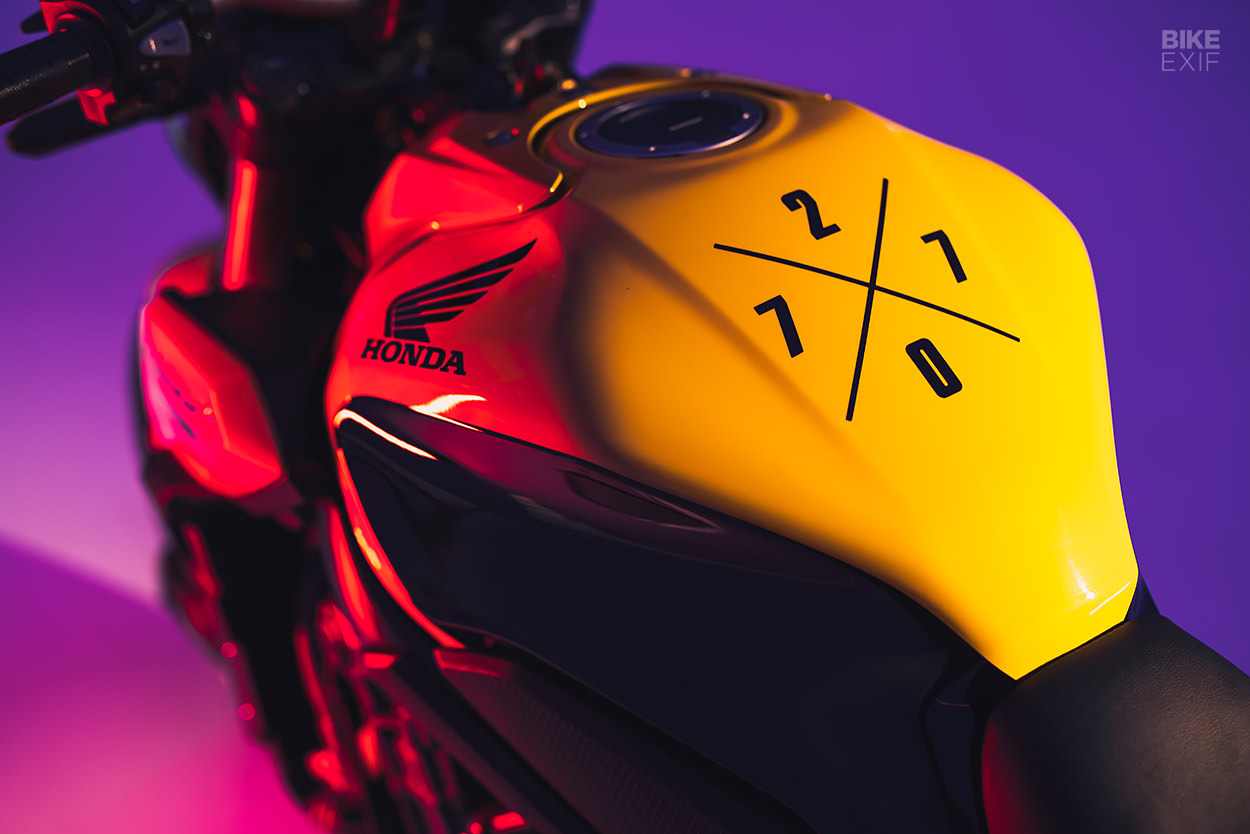 Mandrill’s bikes sure are interesting, and they’re not tied to one particular style either. Inspiration for this project hit when they saw that their client, a young gaming enthusiast, had a Cyberpunk 2077 sticker on his car. Operating on a tight budget, the shop decided to take styling cues from the Arch bike in the game, and apply them to the considerably cheaper Honda CB650R. 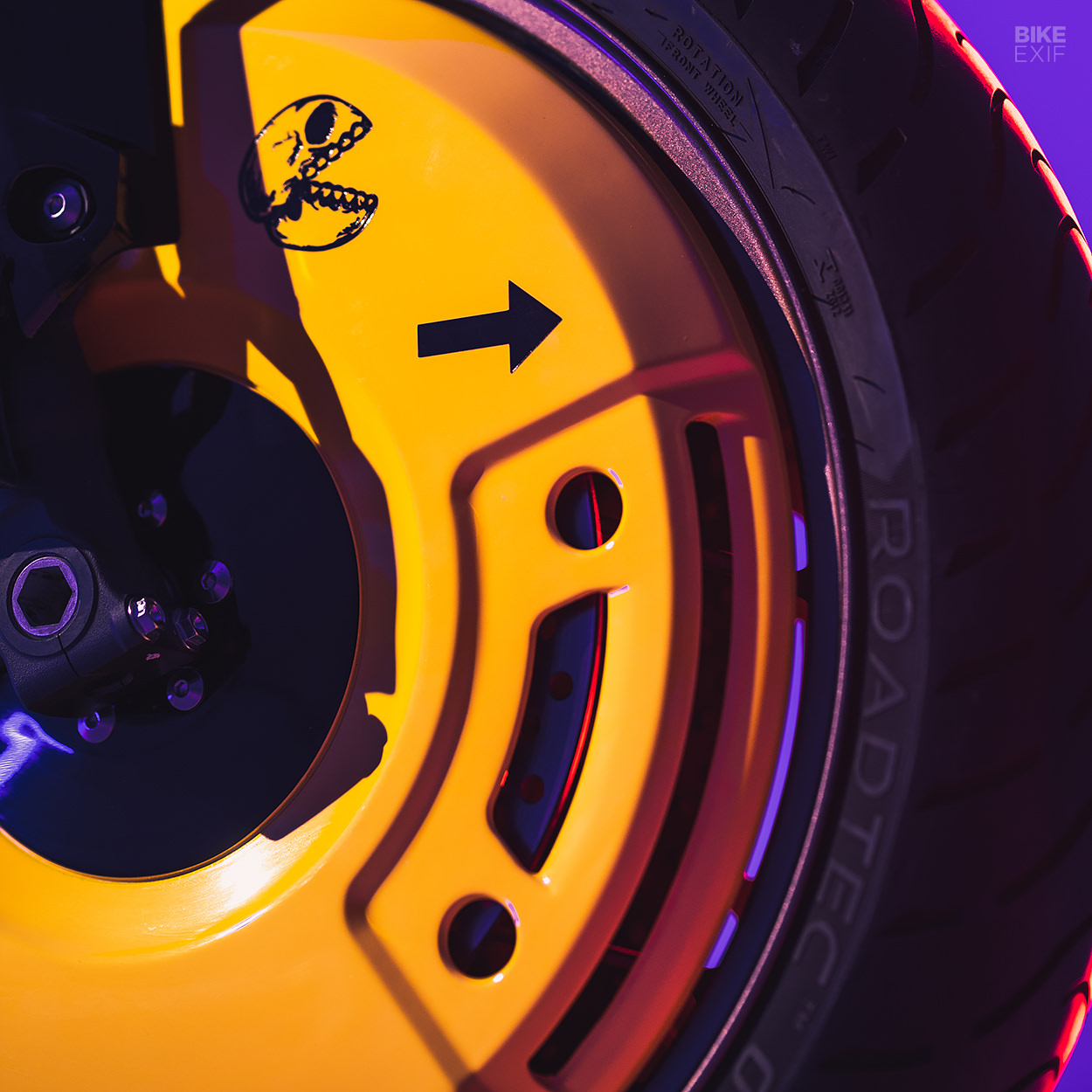 The biggest visual hit is the front wheel cover—a direct nod to the game. Mandrill designed it using 3D modeling software, then 3D-printed it using ABS plastic. It’s mounted to the forks, so it doesn’t spin with the wheel.

“This is the same as the virtual motorcycle in Cyberpunk 2077,” says Luo, “and, of course, it is also like the motorcycle in Akira.” Carbon cooling ducts on the twin front brakes add an extra bit of flair, and the rear wheel wears a pair of carbon fiber wheel discs. 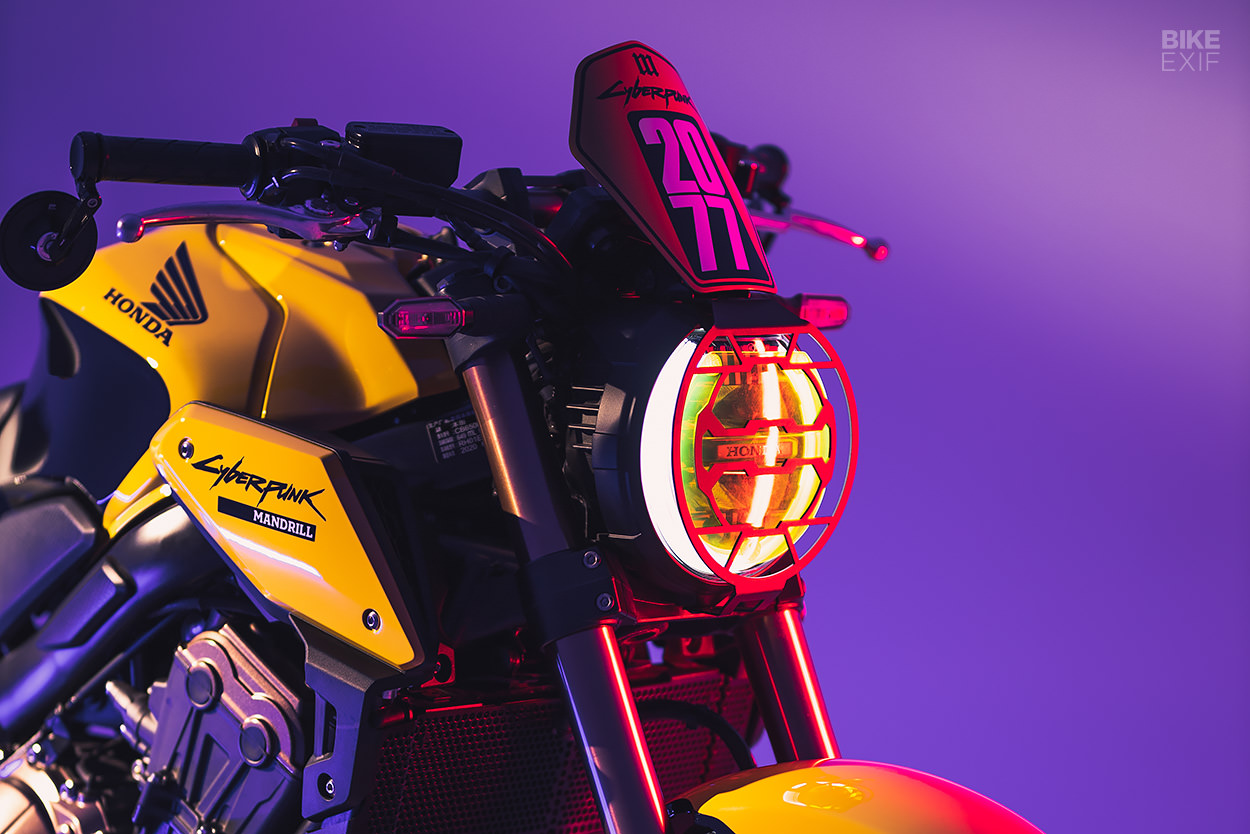 As middleweight roadsters go, the CB650R actually pretty good looking out the box. Honda refer to the style as ‘neo retro café.’ But for the purpose of this project, it simply meant that Luo didn’t need to throw all the bodywork in the bin.

The CB still wears its OEM tank, forward ‘wings,’ front fender, and even its headlight, but it’s all been dressed up. There’s a yellow Plexiglas cover on the headlight, along with a custom-made grill and fly screen. The cockpit’s mostly stock, but it’s been cleaned up with a pair of bar-end mirrors from Motogadget. 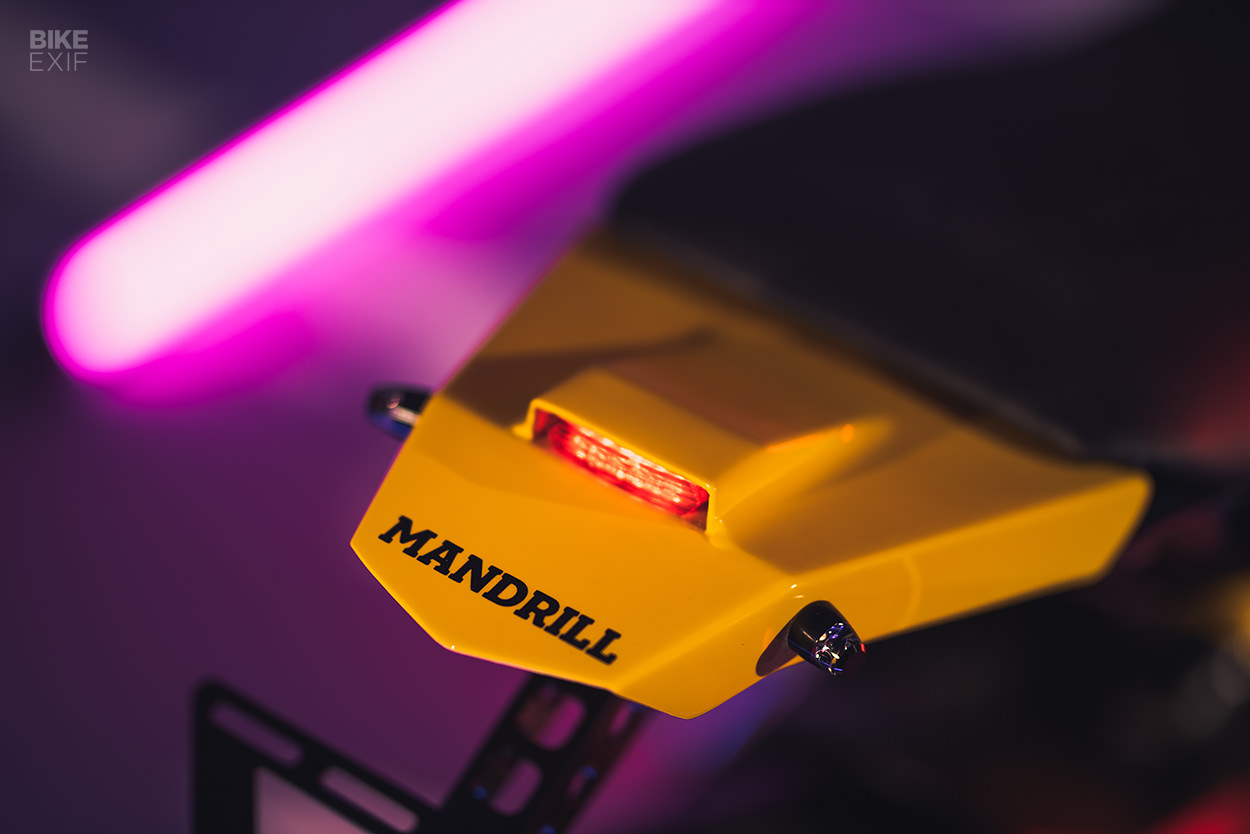 The Honda’s rear end got a lot more attention though. Mandrill ditched the original subframe (and passenger pegs), and fabricated a new, more svelte unit. Up top is a slim bench-style saddle, upholstered in vinyl.

It’s a really neat arrangement, punctuated by a short, hand-shaped aluminum tailpiece. It features an embedded LED taillight, and is flanked by a pair of tiny Motogadget LED turn signals. Lower down is a custom license plate bracket—made by laser-cutting and welding pieces of stainless steel. 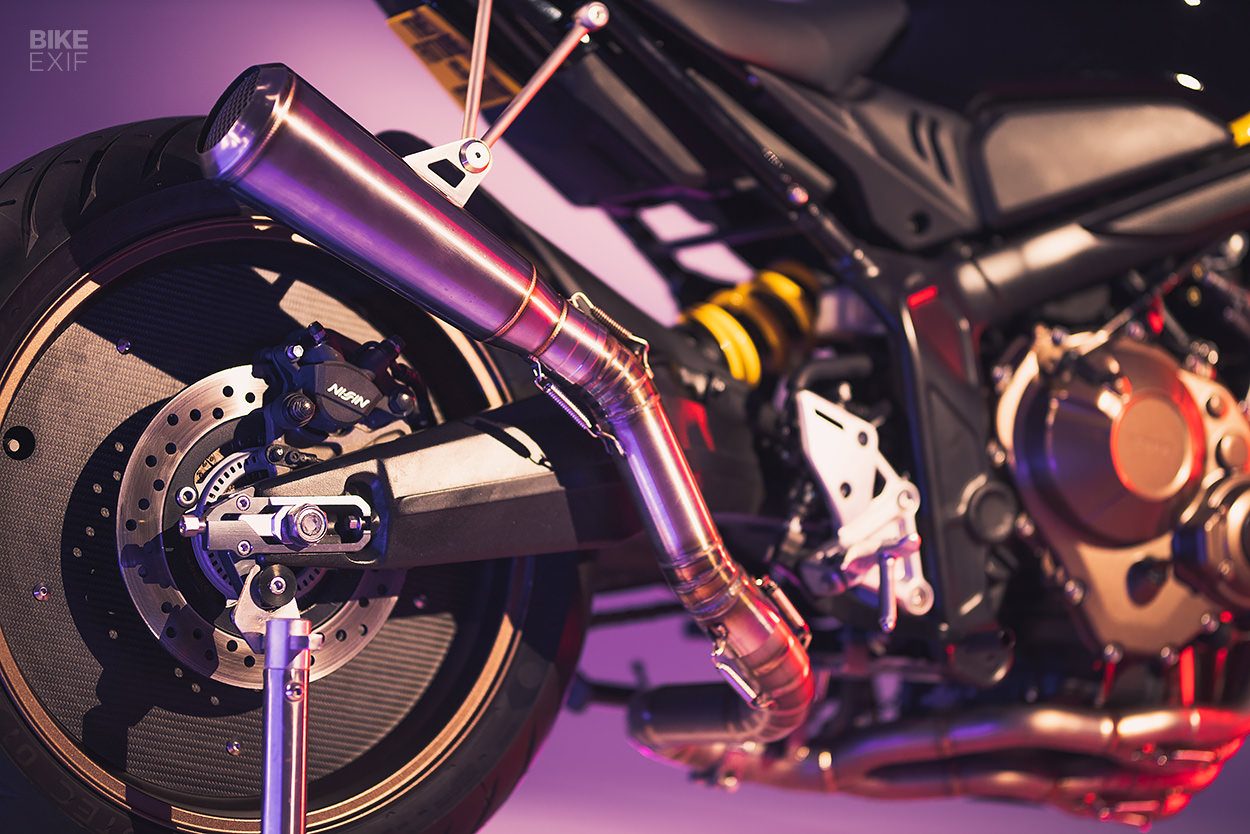 There’s also a custom radiator guard, and a new exhaust system pieced together from various sources. It starts with a set of aftermarket titanium headers, flows into a one-off connector pipe, and terminates in an off-the-shelf muffler. A hand-made hanger keeps things neat.

As per the brief, the Honda’s finished in a striking livery, with Cyberpunk logos added as a nod to the source material. 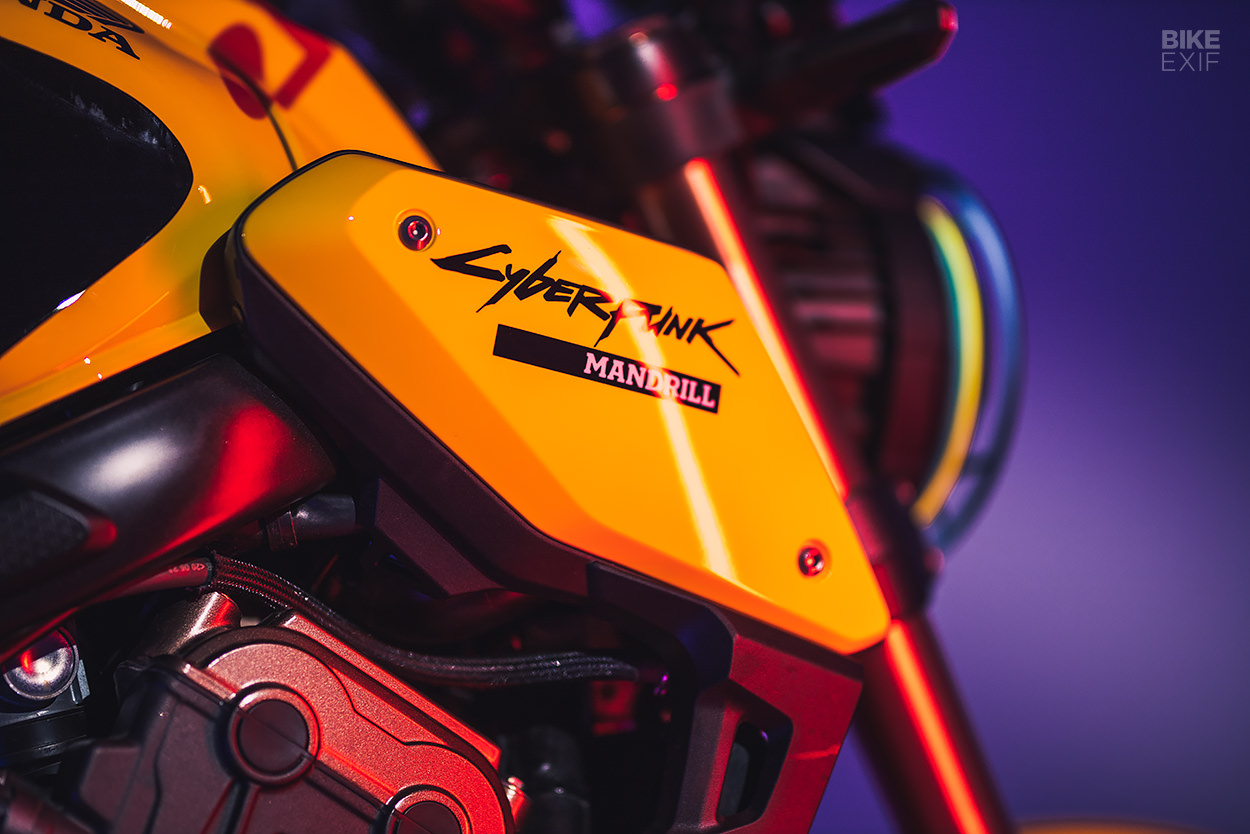 The overall effect is a sharp neo-futuristic take on the Honda roadster, that adds massive visual impact without sacrificing ridability. 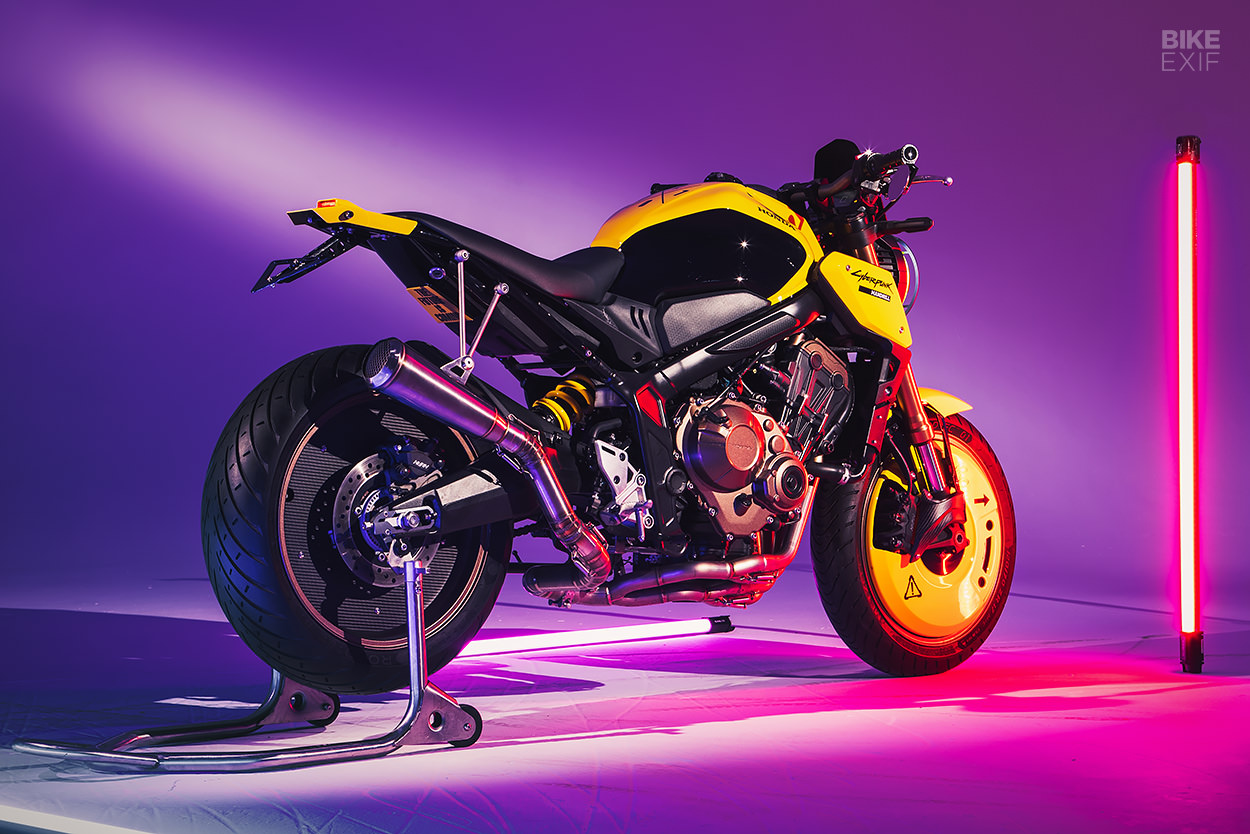