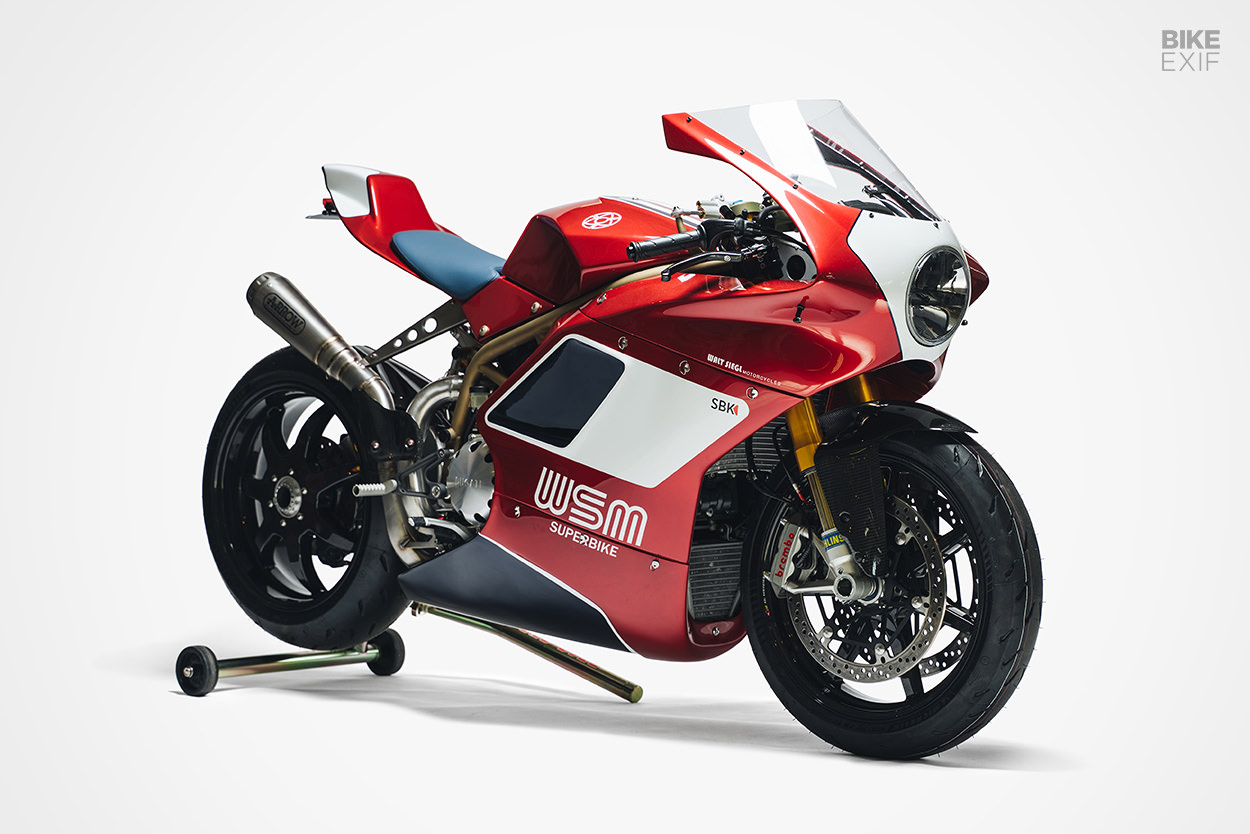 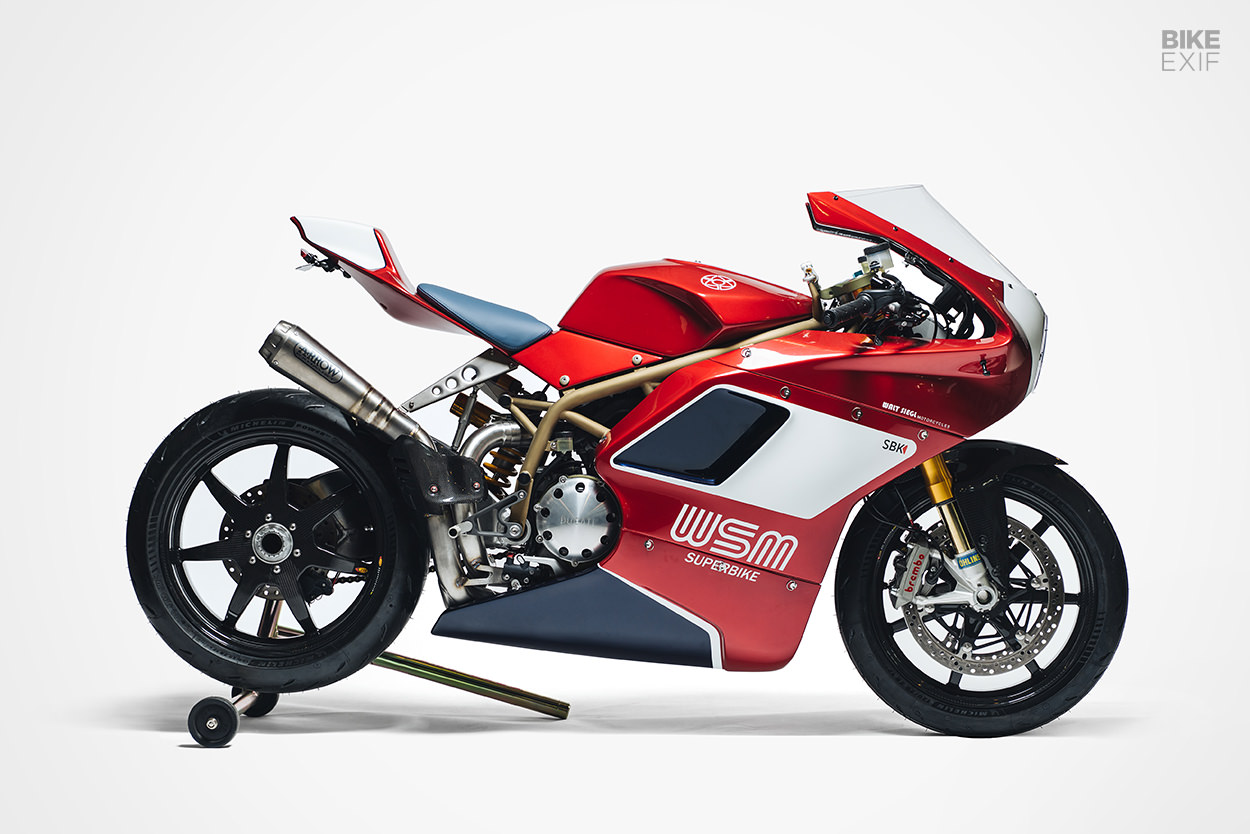 Each Walt Siegl Motorcycles SBK uses the same basic ingredients: an aircraft-grade chromoly frame, carbon fiber bodywork, and a special engine built by the Ducati specialist Bruce Meyers Performance. But Walt is relentless in his pursuit of perfection—so SBK #4 has evolved since the first build. 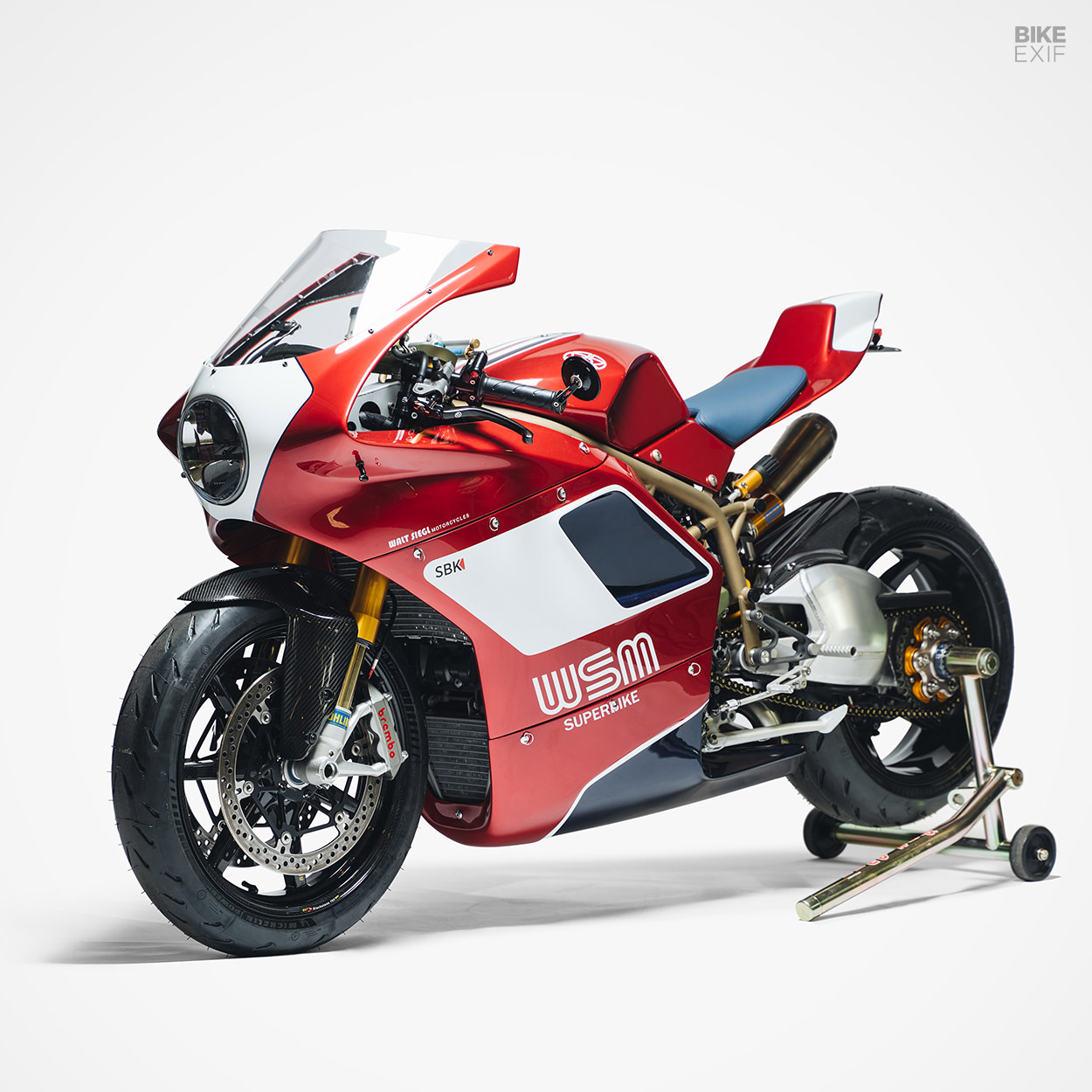 Walt took the brief on this bike quite literally, by using a motor that Bruce had built for a personal SBK project that never happened. “I love Ducati’s long stroke motors,” he says, “but instead of a big monster Corsa engine, I wanted an engine that’s as spritely and responsive as possible, matching the lightness and agility of my SBK chassis.”

“The idea behind the SBK was to build a machine as agile as possible, that steers significantly better than anything you can buy off the showroom floor. Such a bike allows its owner to become a better rider—because riding well and having fun is what it’s all about. High horsepower engines are not necessarily really conducive to having fun, which is why I picked this engine configuration.” 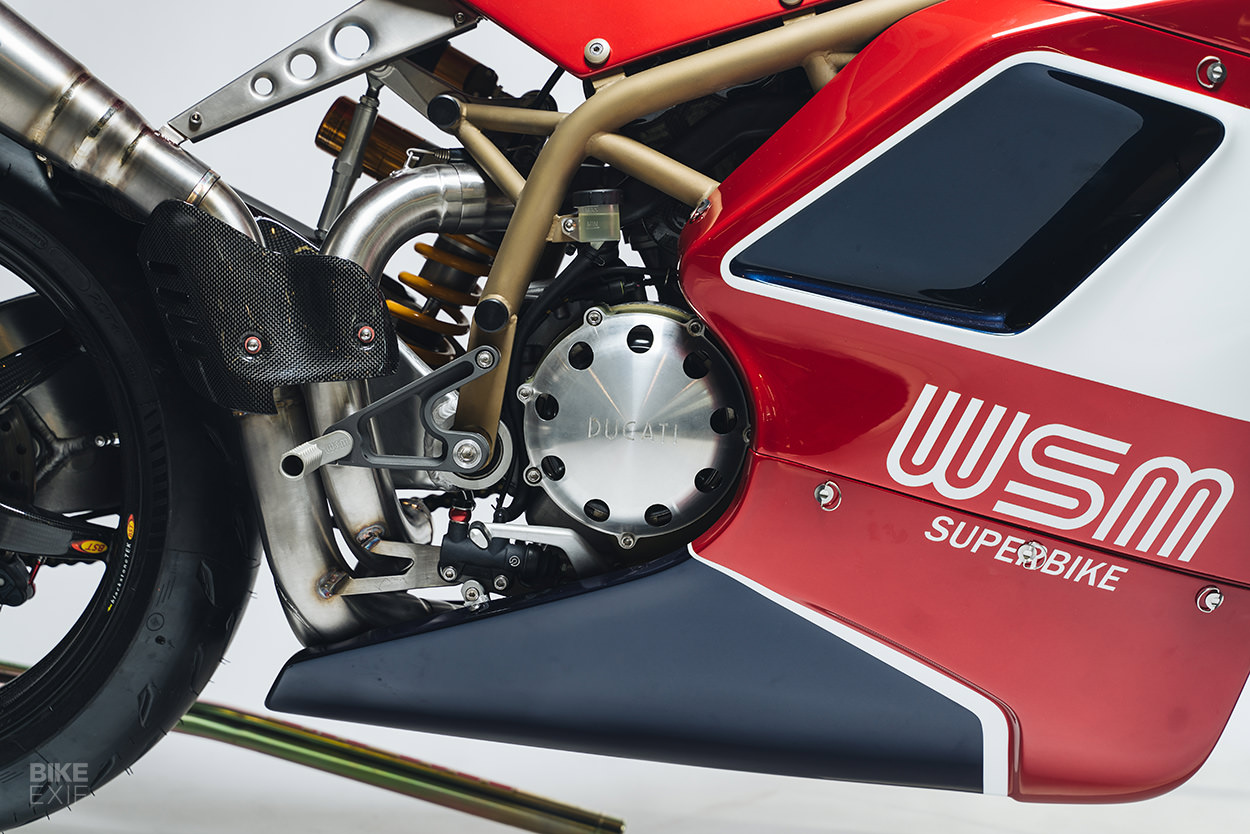 This particular motor uses a Ducati 848 crankcase, a lightened and balanced crank with upgraded bearings, titanium connecting rods, and a 1040 cc big bore kit with Pistal race pistons. Other highlights include ported and flowed cylinder heads with high lift cams, and lightened 1098 gears with an open clutch housing.

“It picks up the throttle like a shotgun blast,” says Walt. 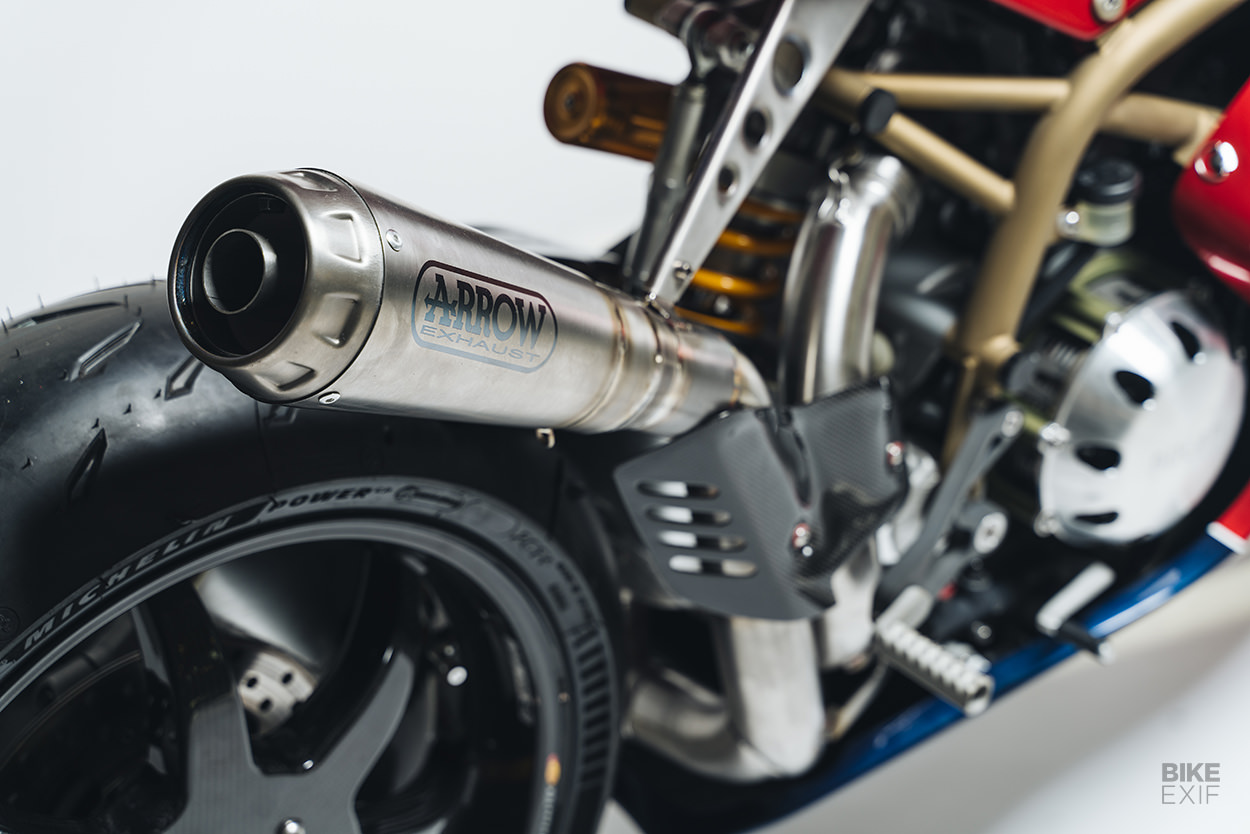 The SBK setup includes a custom WSM carbon fiber airbox, but it’s seen some changes. Most notable is a new fuel injection system inside, designed to reduce air turbulence. The electronics package includes a custom-programmed ECU, traction control and a quick-shifter.

The exhaust headers are unique to this SBK, and terminate in an Arrow muffler. It has a removable dB-killer that offers an additional 5 horsepower when it’s out. 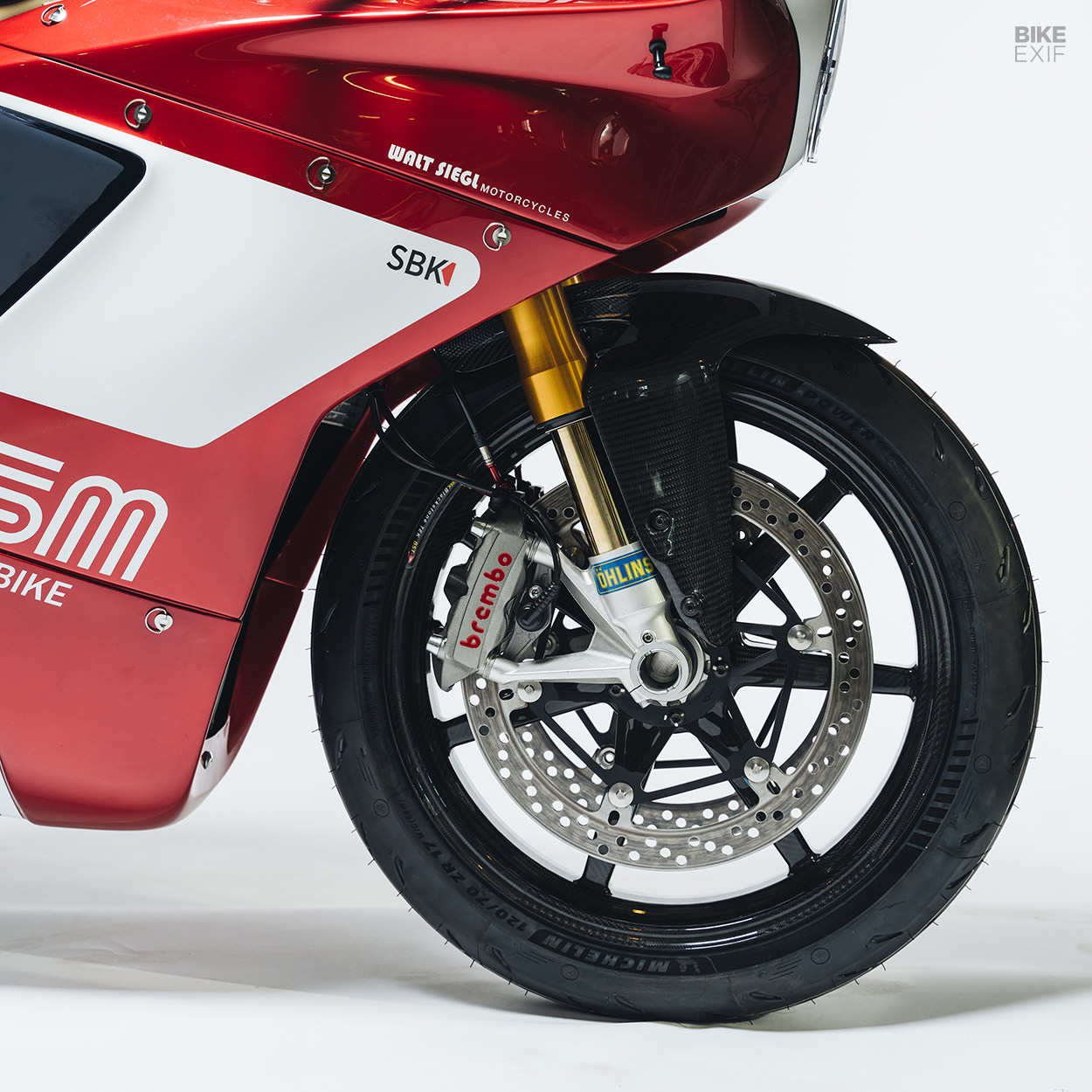 There’s running gear to match the motor too. Walt specc’d it with Öhlins suspension at both ends, complete with custom internals matched to the bike’s light weight. The wheels are ultra-light carbon fiber units from BST, and the brakes are Brembo radial calipers with Spiegler Performance lines. 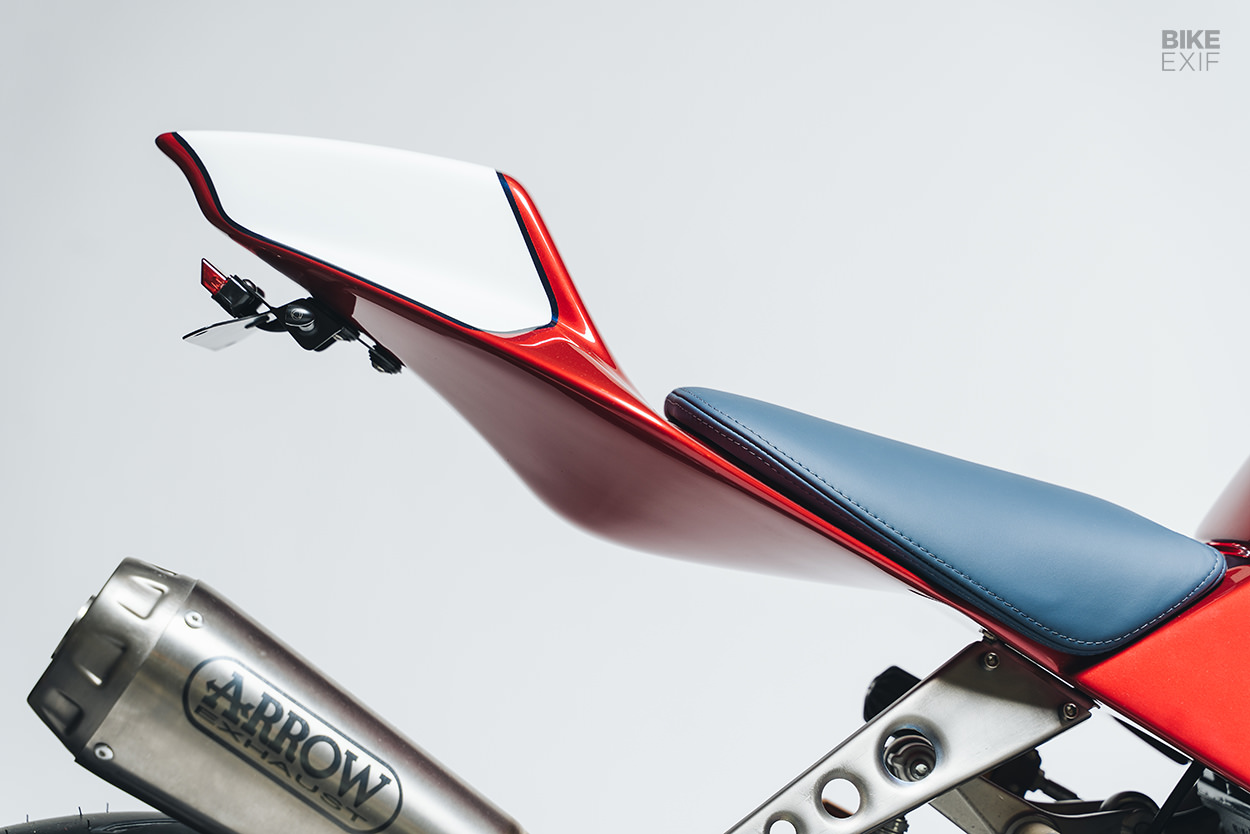 All of the bodywork is carbon fiber, manufactured by Indy Performance using tooling masters that Walt made in-house. He redesigned the SBK tank on this project to increase its capacity, and to change the way air flows into the airbox. And, to save weight, the floor of the carbon fiber tank is now the lid of the airbox.

The tail section sits on a carbon fiber subframe, which weighs a paltry three pounds. It’s another part that’s been improved on SBK #4. 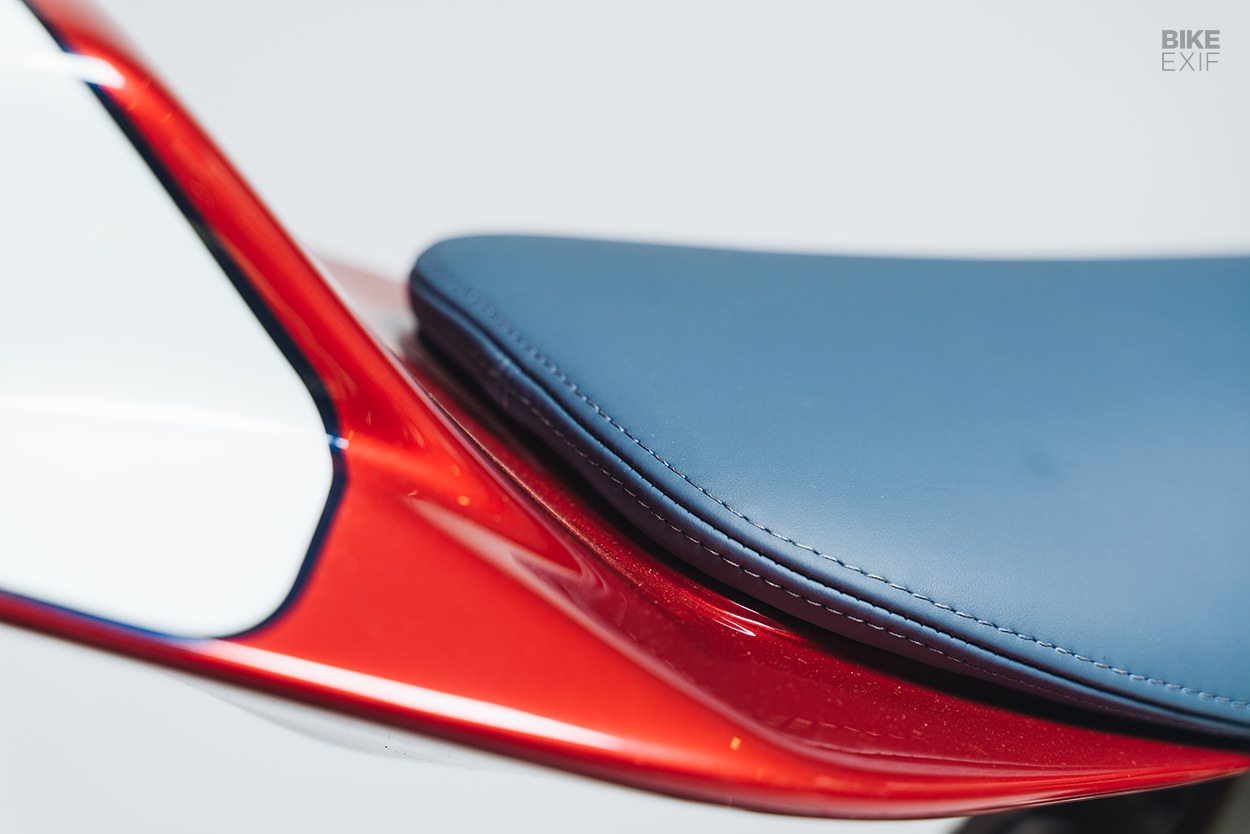 “I’m always trying to build the perfect machine,” says Walt, “but I don’t want to give up the visual clues that show that these bikes are largely designed by me, and built with my hands. This is always a conversation I have with myself: which components should carry that visual language of the handmade?”

“I worry sometimes that some streamlined, high-tech looking parts might lose that visual aspect, of all the love and effort that I put into these machines.” 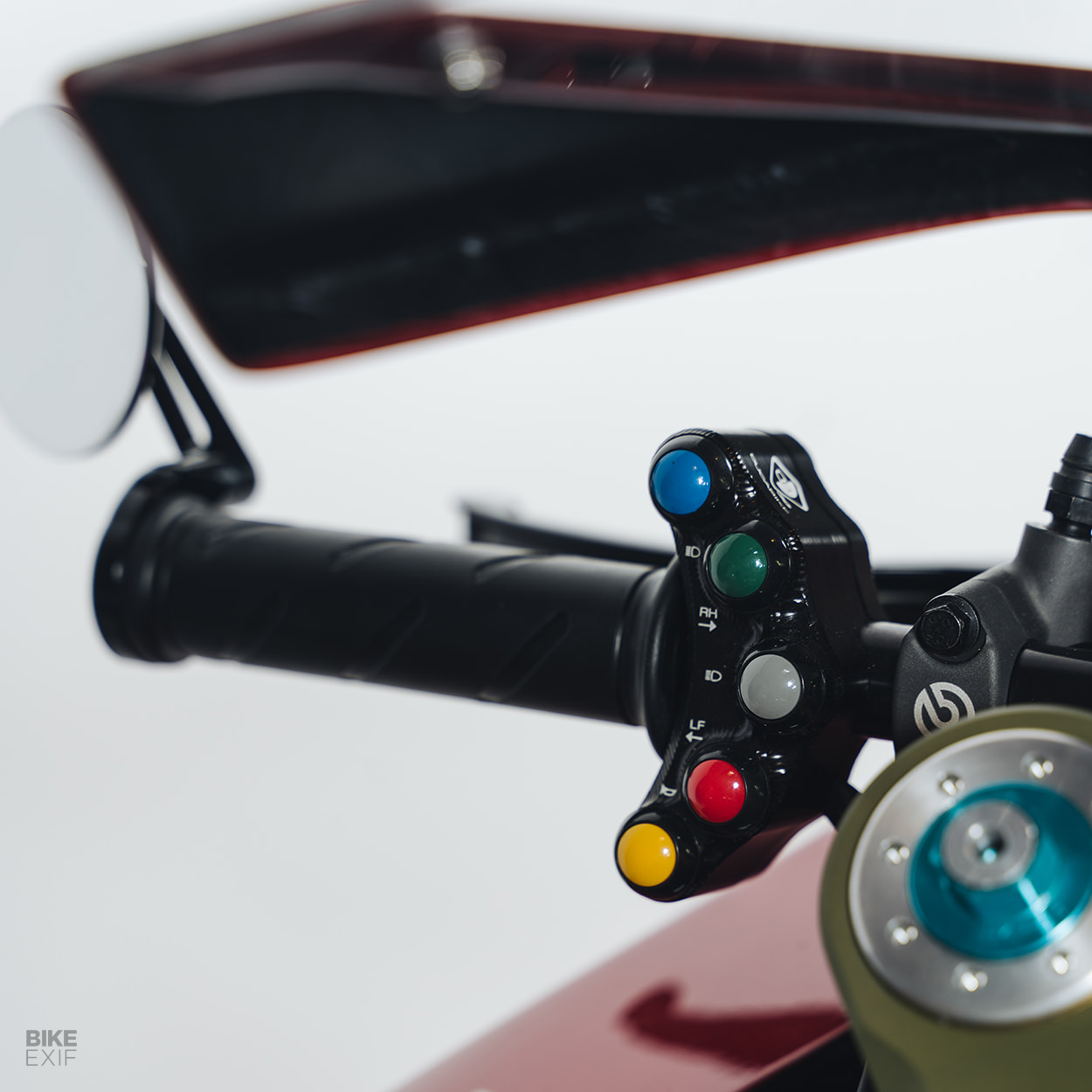 Because of the demands of a race bike, not all components can be made by hand—but everything is top shelf. Up in the cockpit are a Ducati Corsa magnesium upper triple tree, an Öhlins steering damper, Brembo RC master cylinders, a Ducati 1198S speedo, Ducabike switches and Kellermann turn signals. The subtly branded foot controls are Walt’s own products. 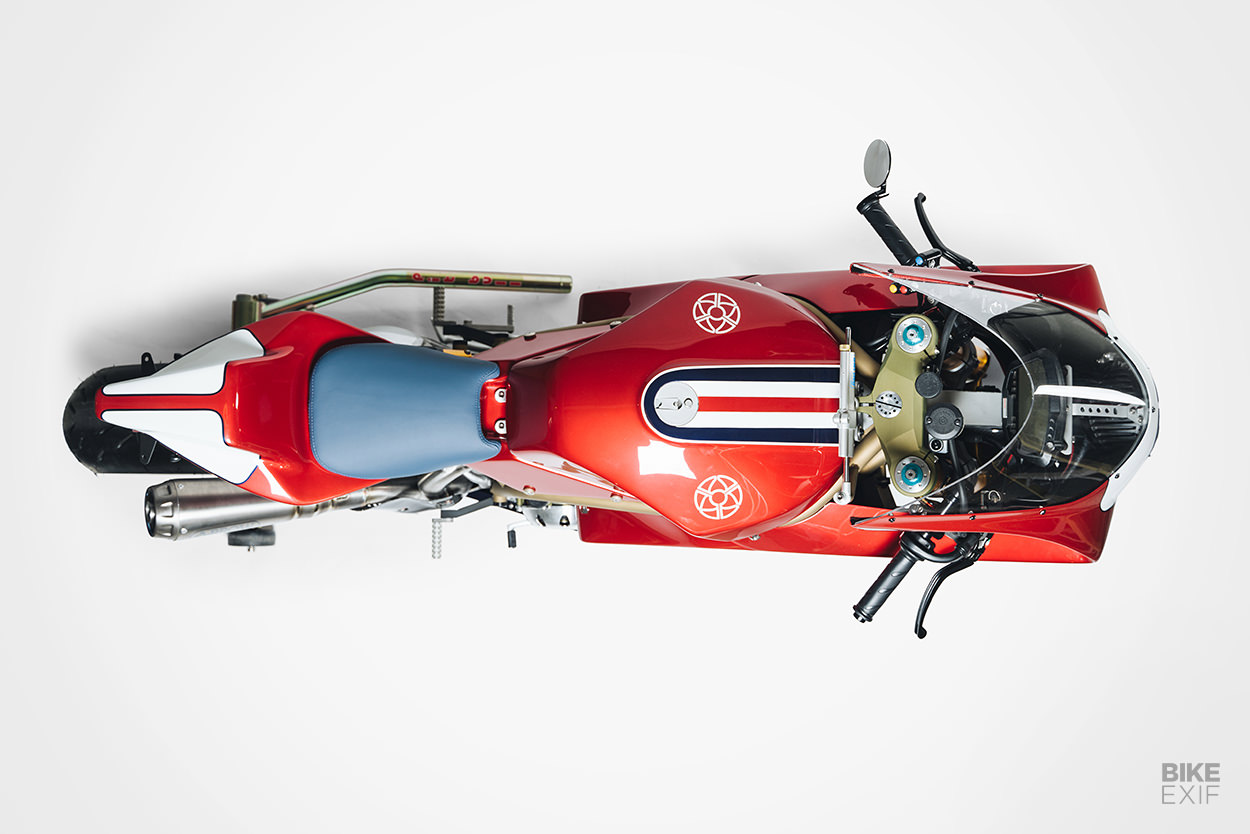 The Ducati’s owner did have one special request: the color. “He sent me a picture of a Ferrari SP2 painted in a limited color,” Walt tells us.

“It’s always a bit tricky to try to transfer color combinations that work on a car onto motorcycles—it’s not always successful. Cars, with their big panels, reflect light and show shadows much differently than on bikes, since bikes have much more intricate surfaces.” 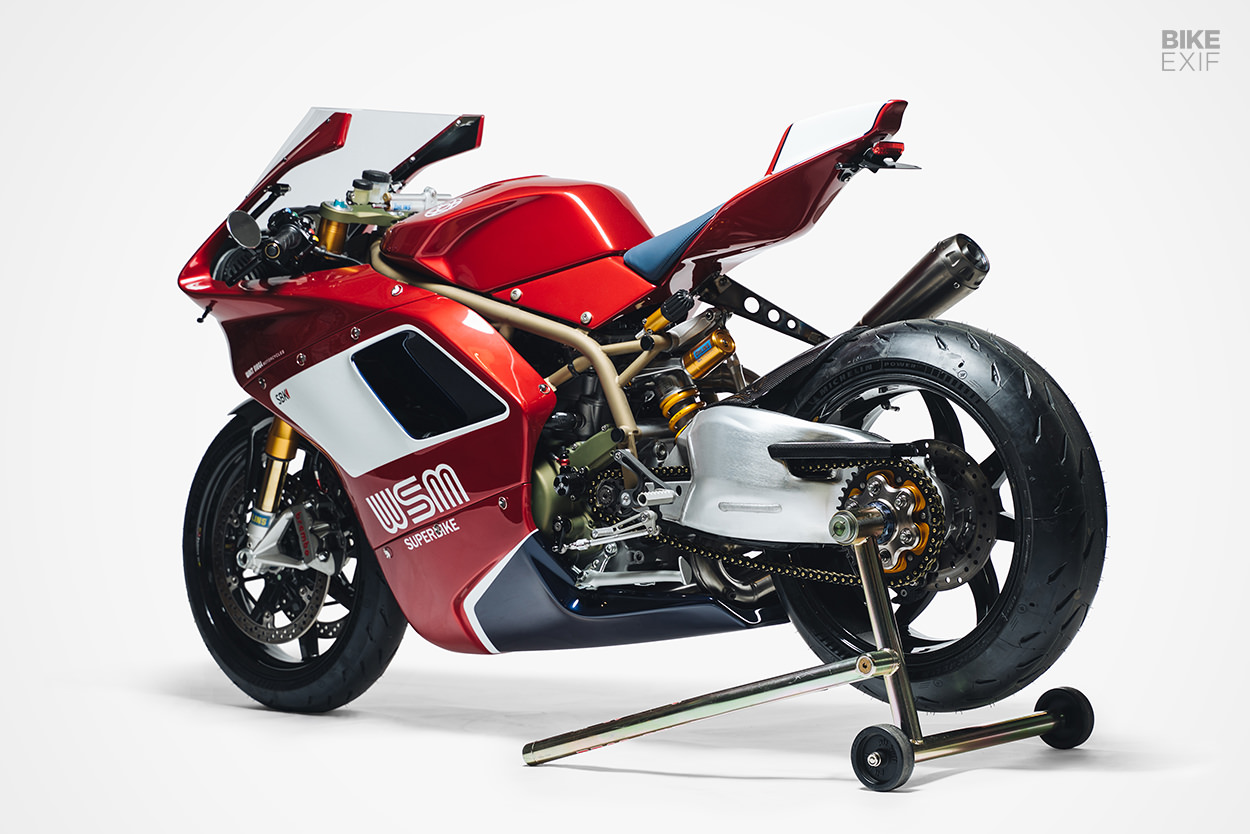 The risk paid off though—SBK #4’s livery is simple and striking, complete with a WSM logo that tips its hat to vintage Ducati typefaces. It epitomizes what we’ve come to expect from Walt: desirability, quality, and supreme levels of good taste. 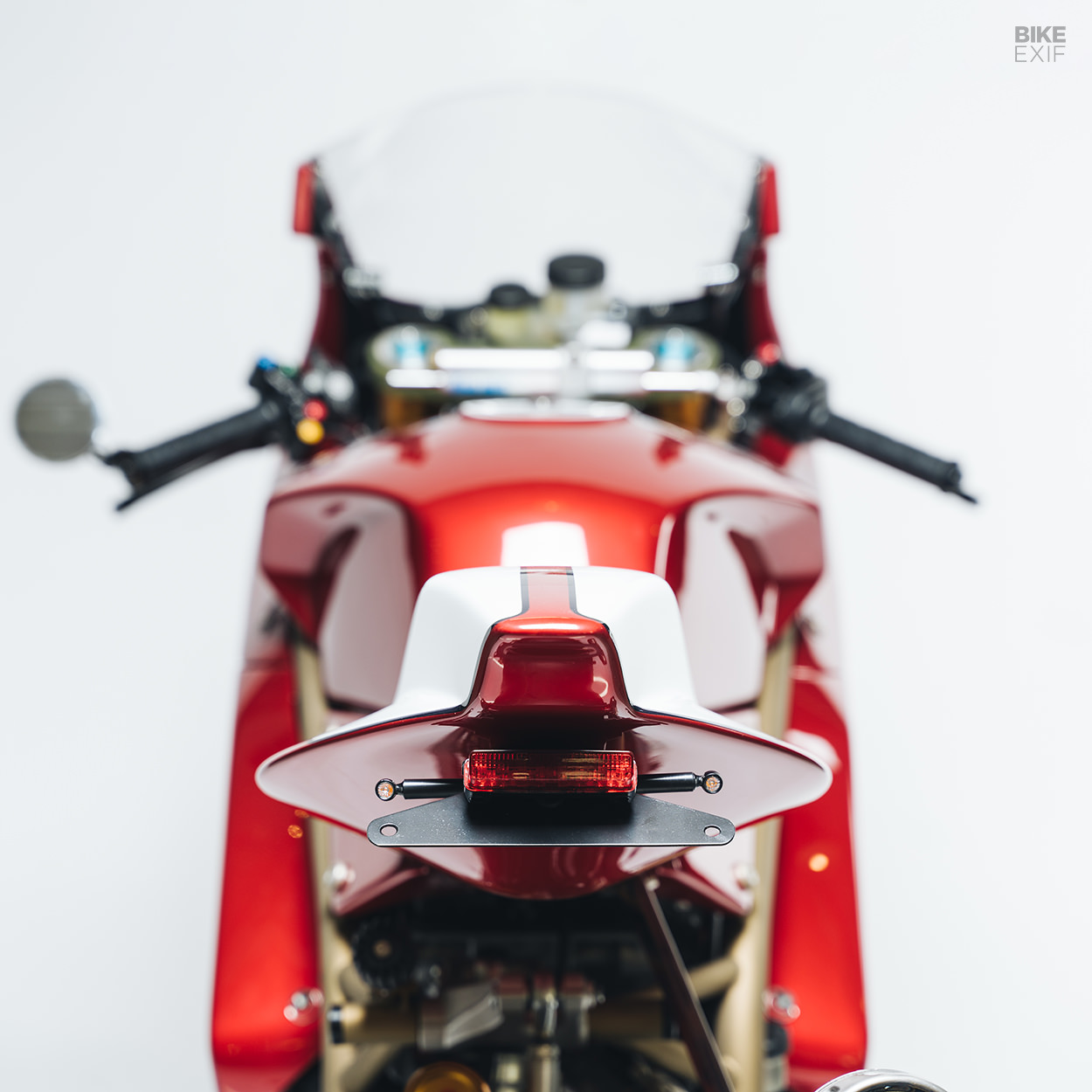