Sekhmet: A BMW boxer café racer with an 80s vibe 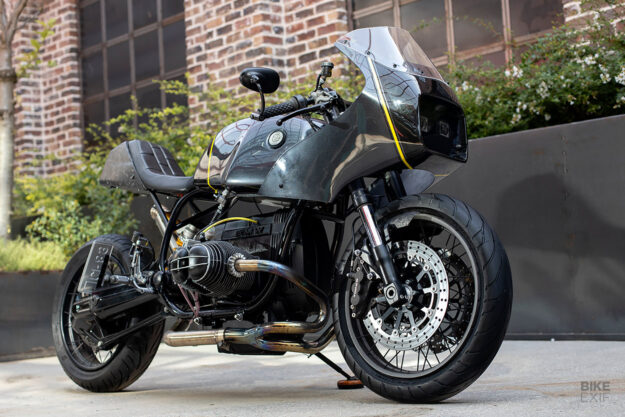 It’s amazing how versatile the classic BMW boxer is is. Do you want a long, low and mean drag bike? A rough and ready scrambler? A sleek, stylish café racer? An airhead will do all of that, and more.

This 1982 BMW R80 falls firmly into that last category. It was built by 72 HKG Performance—a new collaboration between Antonio (72 Cycles Performance) and Jorge (Hell’s Kitchen Garage), based in Burgos, Spain. 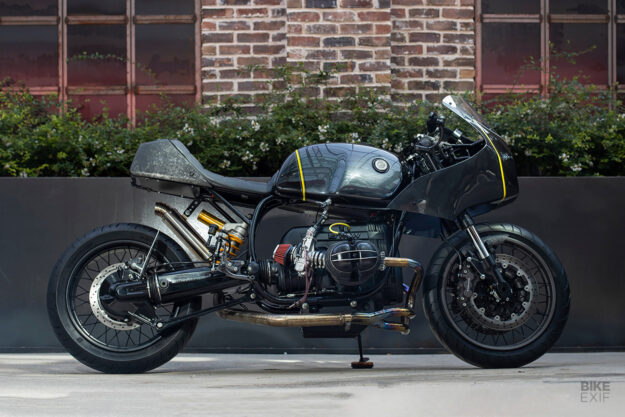 They made it for an Egyptian friend, and named it ‘Sekhmet’ after the powerful mythical goddess. Extensively modified, only the engine, frame and fuel tank remain from the original bike.

“I was looking for a supercar feel, matching high performance to classic luxury,” explains Antonio. “It looks like a classic boxer but it feels brand new. You don’t need keys, everything works with buttons on the handlebars, and most of the electronics are hidden away.” 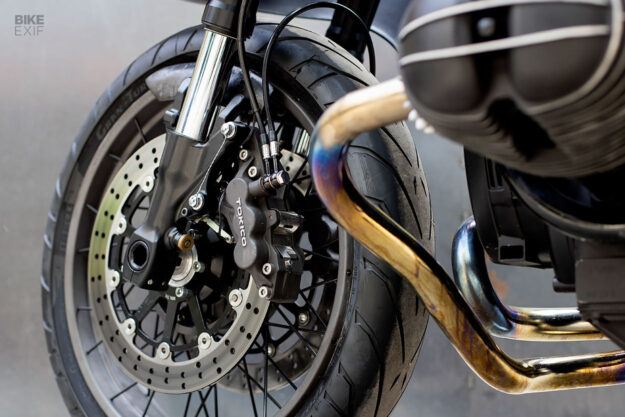 First up, a set of spoked wheels from a later model BMW R850 were painted black and bolted on. Wanting a bit more from the suspension, a set of Suzuki Hayabusa forks (and their Tokico brakes) were grafted into place in front.

The swingarm is a Frankenstein creation, using parts from a BMW K1100 and the aforementioned R850, with the Öhlins shock from a Ducati 999. It sounds simple on paper, but it was far from it. To fit the modern swingarm, a later-model gearbox had to be swapped out—which is why this 80s airhead now runs a hydraulic clutch. 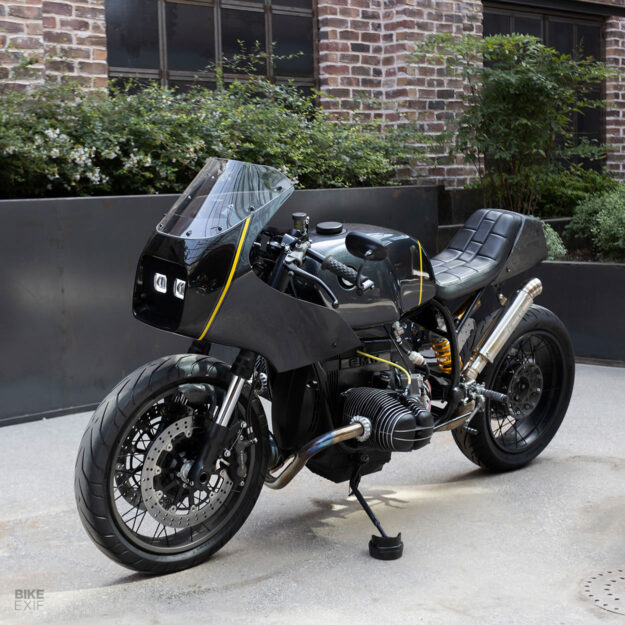 We’re loving the 80s endurance racing vibe that the BMW’s new bodywork gives off. The exquisite fairing was lifted from an early model Yamaha XJ600, and features twin LED headlights. They remind us of a Jawa—the diminutive, furry humanoids native to the desert world of Tatooine.

The rider cockpit is very straightforward—or at least it appears that way. TRW handlebars are equipped with integrated buttons and Highsider mirrors. A Motogadget Chronoclassic speedometer sits front and center, and the brake and clutch master cylinders have been upgraded too. 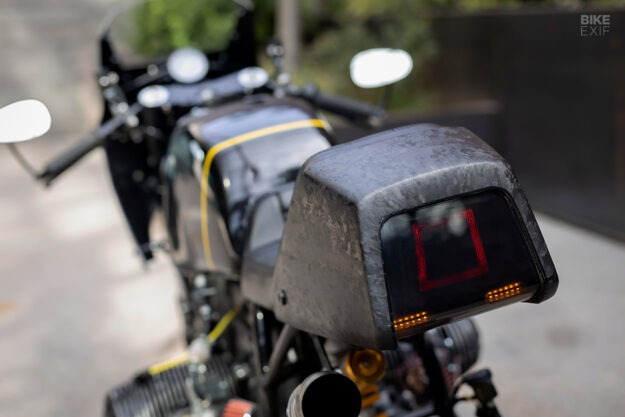 The tail section was made by hand out of steel, then ingeniously wrapped in a forged carbon vinyl. The pleats on the spacious leather seat were modeled after a Rolex watch strap.

A smoked plexiglass screen hides the tail light and turn signals; another detail that looks like it was taken straight from an 80s race bike. The whole arrangement is perched atop a new subframe, complete with a redesigned rear shock mount. 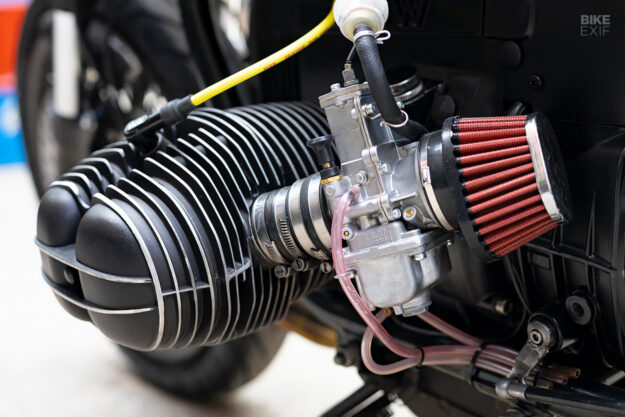 Along with the aesthetic upgrades, the engine also received its fair share of attention. Starting with a full teardown, it was reassembled with forged pistons, fresh gaskets and seals, and a new coat of black paint. Upgraded electronics by way of a new CDI, a Motogadget mo.unit and a full rewire will keep this thing ticking over for decades to come.

Fuel is delivered, with gusto, by a pair of 38 mm Mikuni flatslide carbs with pod filters. Hot air exits through a custom stainless steel exhaust, set off perfectly against the dark paint job. 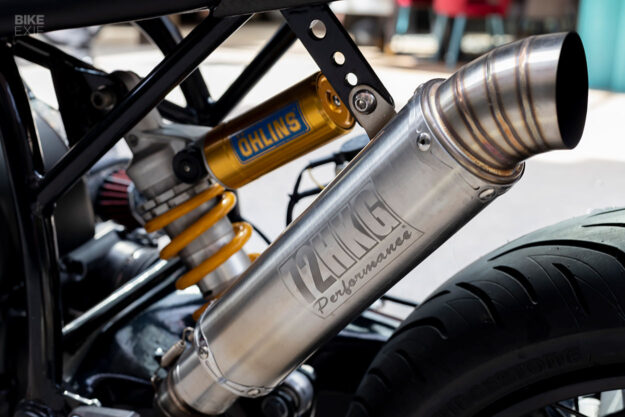 “The bike exceeds 180 km/h with impeccable stability and it has a fully aligned 160 rear tire,” says Antonio. “We spent more than a year with the bike, improving components and looking for a perfect combination of power, stability and shape. I think Sekhmet is a good mix of badass and glamour!”

Antonio is also quick to point out that he and Jorge will only ever build one-of-a-kind bikes, tailored to each customer’s specification. “We never repeat a shape, color or design,” he adds. “Our bikes have to be unique.” 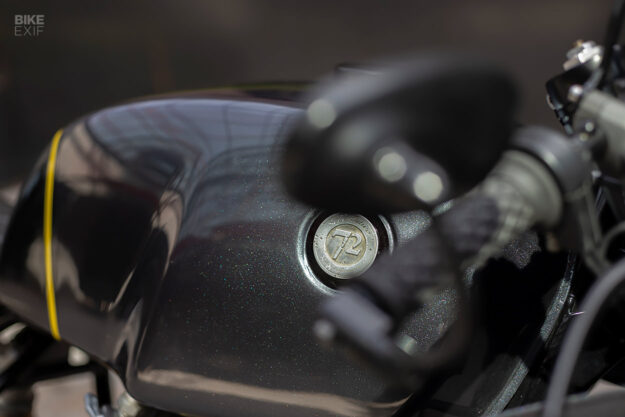 That sounds like both a blessing and a curse, since we’re sure there are a number of people out there who wouldn’t mind this exact bike in their garage. We all know how versatile the airhead platform is, and now we all know how good 72 HKG Performance is at harnessing that versatility. 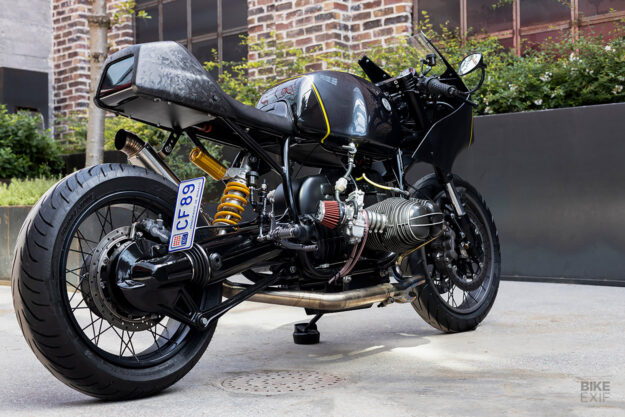