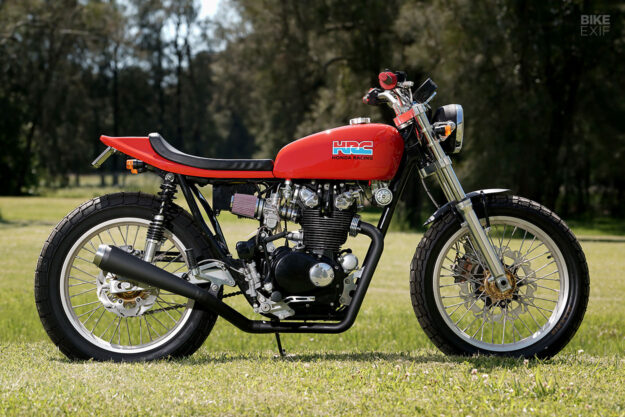 In fact, judging by this 1971 Honda CB450 turned street tracker, fabrication is more than just a rainy day pastime of Peter’s. We’re convinced it’s the only thing he does when he isn’t eating or sleeping, because we’ve lost track of the sheer number of parts he made from scratch for this build. 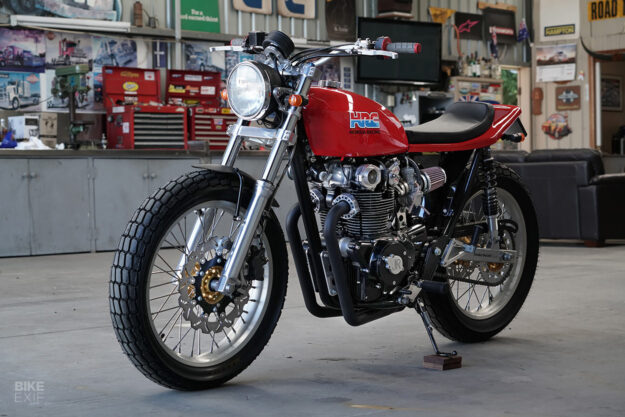 If you’re familiar with Peter’s previous work (like this Yamaha RD350 dirt tracker), you’ll know that the man loves a challenge. His projects often start with donor bikes in the roughest states of neglect. Believe it or not, the shiny red Honda you see here started out as a pair of crusty junkyard specials; one that was donated for free, and one that cost just $210.

The assignment was simple. Peter’s brother, John (an ex-dirt tracker), asked him for a classic flat tracker that he could take on the street. His ideal build only had two requirements: passenger pegs, and a seat long enough to take his girlfriend out on rides. 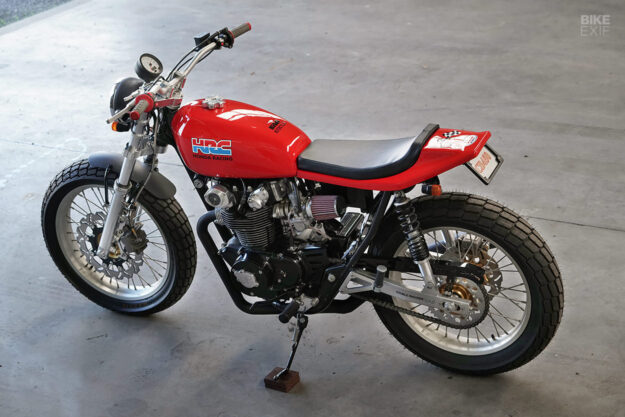 Between his two donor CB450s, Rowland had a salvageable motor and a solid frame, but not much else worth saving. Where most builders would see a lost cause, Rowland saw a prime opportunity to kill time in the garage.

You’ll find a few of the usual scratch-built suspects on this sweet little street tracker. The entire exhaust system is handmade, as is the battery box and the mounts for the headlight and speedometer. But some of the things Rowland chose to build from scratch are wholly unexpected. 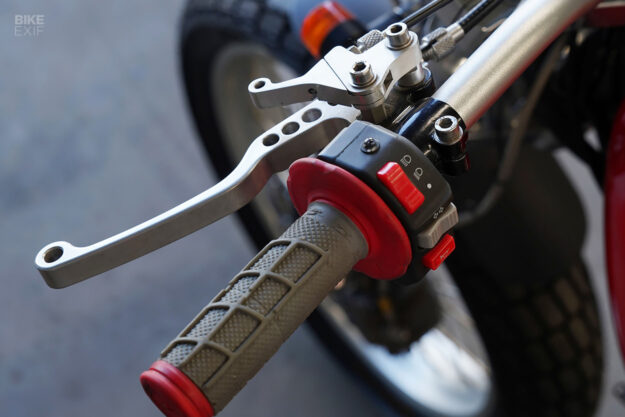 A good example would be the CB450’s hand controls. The matching clutch and brake levers that Peter machined are a nice touch, but he didn’t just make the levers. He also made the adjustment hardware from scratch, right down to the knurling on the barrel adjusters.

How about the CB’s new swingarm? Because Peter sharpened up the frame’s steering head to a tidy 25 degrees, he had to fabricate a longer swingarm to stretch out the bike’s wheelbase. Building a square-section swingarm from scratch is no mean feat, but Peter also fabricated all his own hardware for the rear wheel adjusters, and the rear axle. 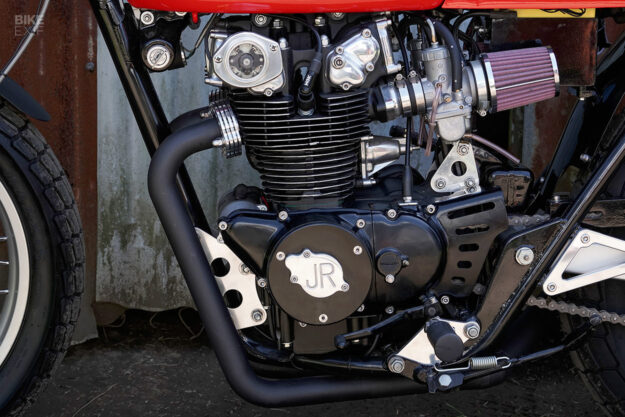 We’d also be remiss if we didn’t highlight our personal favorite handmade part from the build—the CB450’s points cover. By copying the OEM cover’s dimensions into an AutoCAD system, Peter was able to drum up a fresh reproduction, with a twist. The outer cover on his version’s been replaced by a clear Perspex disk—so you can watch the ignition do its “arcin’ and sparkin’,” as Peter would say.

Everywhere you look, from the aluminum triple trees to the foot controls, you’ll find a custom-made part. So the more obvious question is whether there’s anything Peter didn’t build himself. There is—but nothing’s been fitted without at least some fettling. 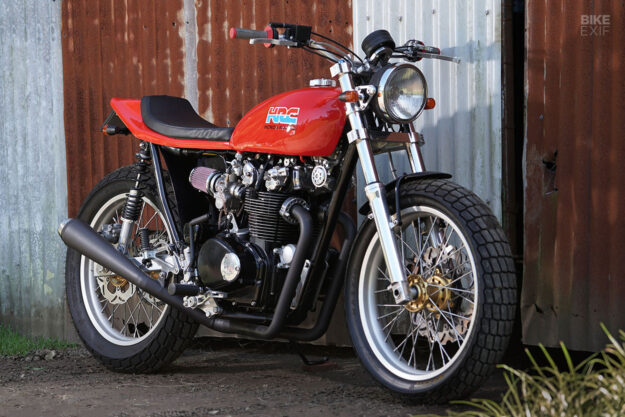 Take the front forks, which came from a first-gen Yamaha R6 donor. Peter realized that they’d been bent in a previous life, so he machined himself a custom jig to straighten them out by hand.

Peter laced the 19” wheels up himself, using Excel-made Yamaha YZ250 hubs, and Sun rims and stainless steel spokes from Buchanan’s. The front brake caliper and master cylinder are from a Yamaha WR250, but Peter had to machine a bracket to make them work with the R6 rotor, which in turn needed to be adapted to match the YZ hub. The Hel Performance brake lines are off-the-shelf, at least. 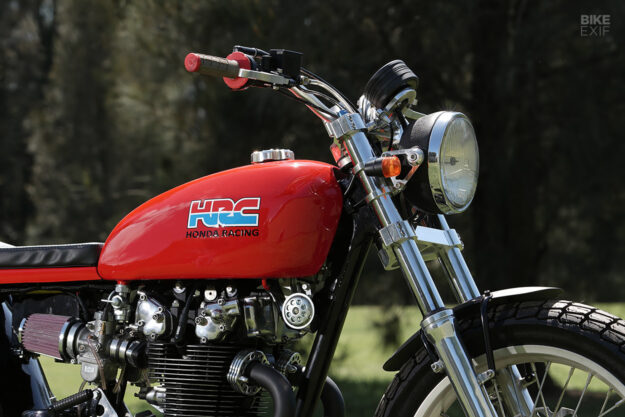 The tank was a donor as well (it came from the original junk yard CB), but it was as rough as the rest of the bike. Peter ultimately ended up cutting it into four pieces, chopping about 40 mm out of the middle for a slimmer profile, and hammering out all the dents himself. He also fabricated a new tunnel, a threaded tank bung and his own gas cap.

The only major part that didn’t come out of Peter’s workshop was the flat track racing-style seat. But the Honda’s frame was modified to accommodate it (and de-tabbed elsewhere). Miscellaneous bolt-ons include new Ikon shocks, the handlebars and grips, and an Acewell speedo. 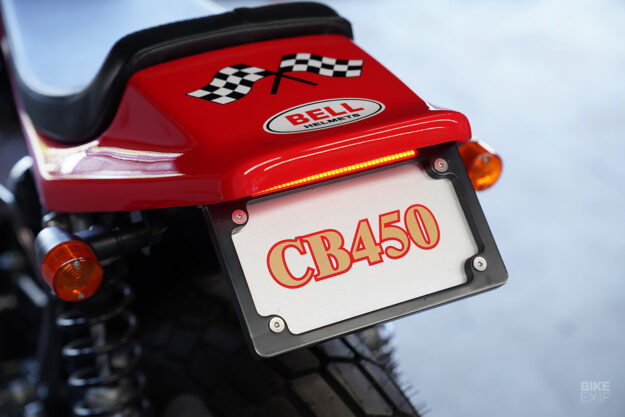 Naturally, Peter rebuilt the engine too. It now runs with oversized high-compression pistons, and upgraded Mikuni carbs attached to custom-made intake manifolds. All the paintwork, from the tank and tail right down to the blacked-out exhaust, was done in-house too.

There’s no denying that Peter’s CB450 is a masterclass in self-sufficient custom motorcycle building. Anyone willing to make their own nuts from scratch deserves our utmost respect—especially when they’re this impressive. 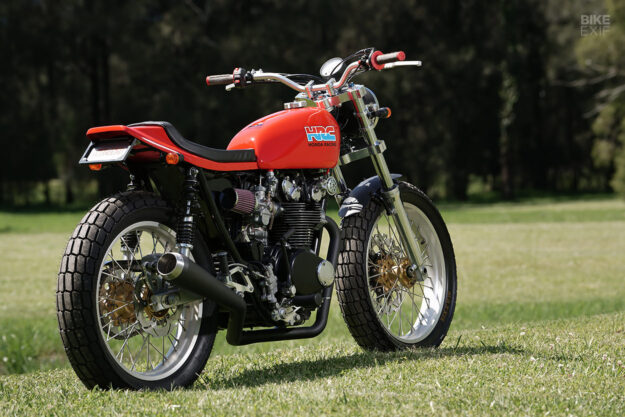