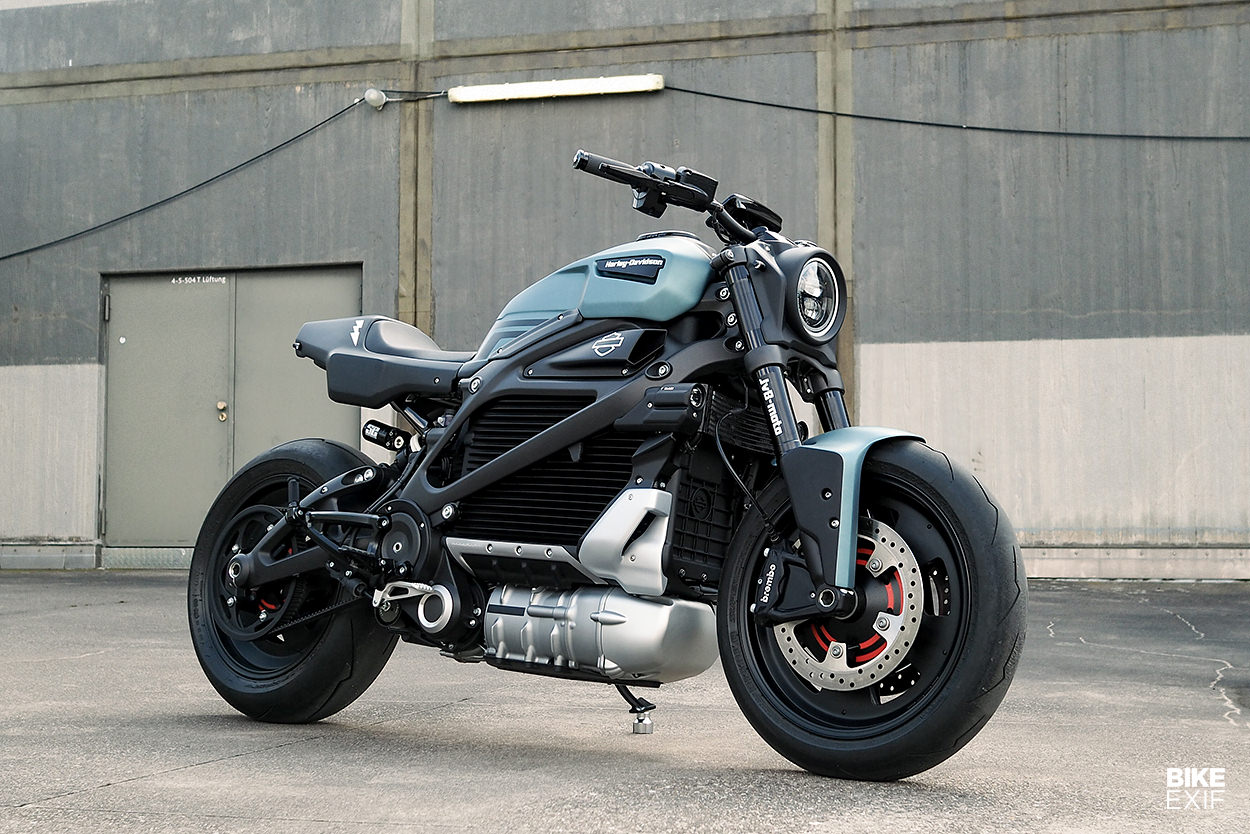 It’s been a couple of years since Harley-Davidson revealed the LiveWire and sent shockwaves through the industry. It was the first battery-powered sportbike from a major OEM, and it still has no competition.

Milwaukee positioned (and priced) the LiveWire as a halo product, so column inches have been high and sales low. That also means there have been no significant customs based on the LiveWire, as far as we can tell. There’s been the odd paint job, and the Long Way Up bikes were certainly modified, but that’s essentially it. 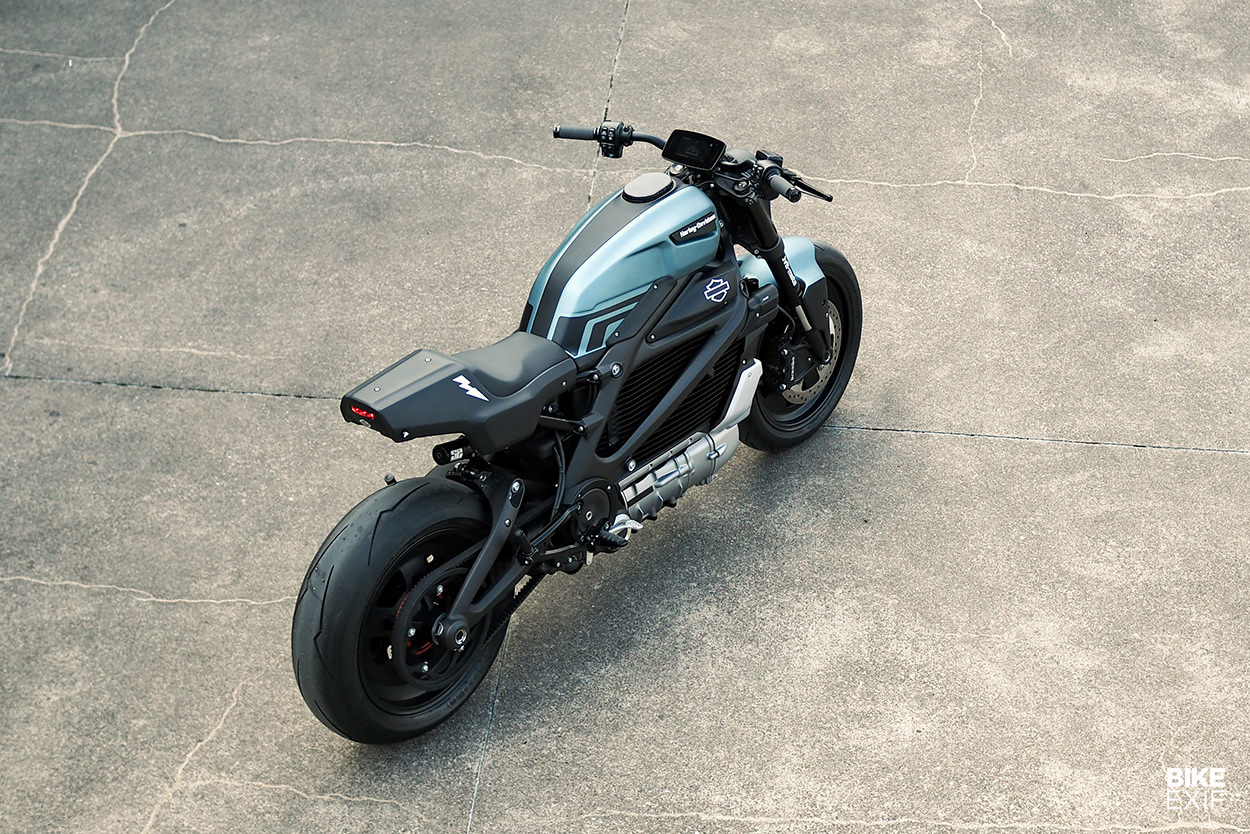 So our eyebrows went up when Jens vom Brauck dropped us a line to say he’d just finished a custom LiveWire, a commission straight from Harley-Davidson’s mothership in Milwaukee.

Called ‘Silent Alarm,’ it’s a sleek and coherent restyle. At first glance, it’s hard to pin down why it looks so good—much in the same way that Singer 911s and Emory 356s are obviously Porsches, but look subtly different. 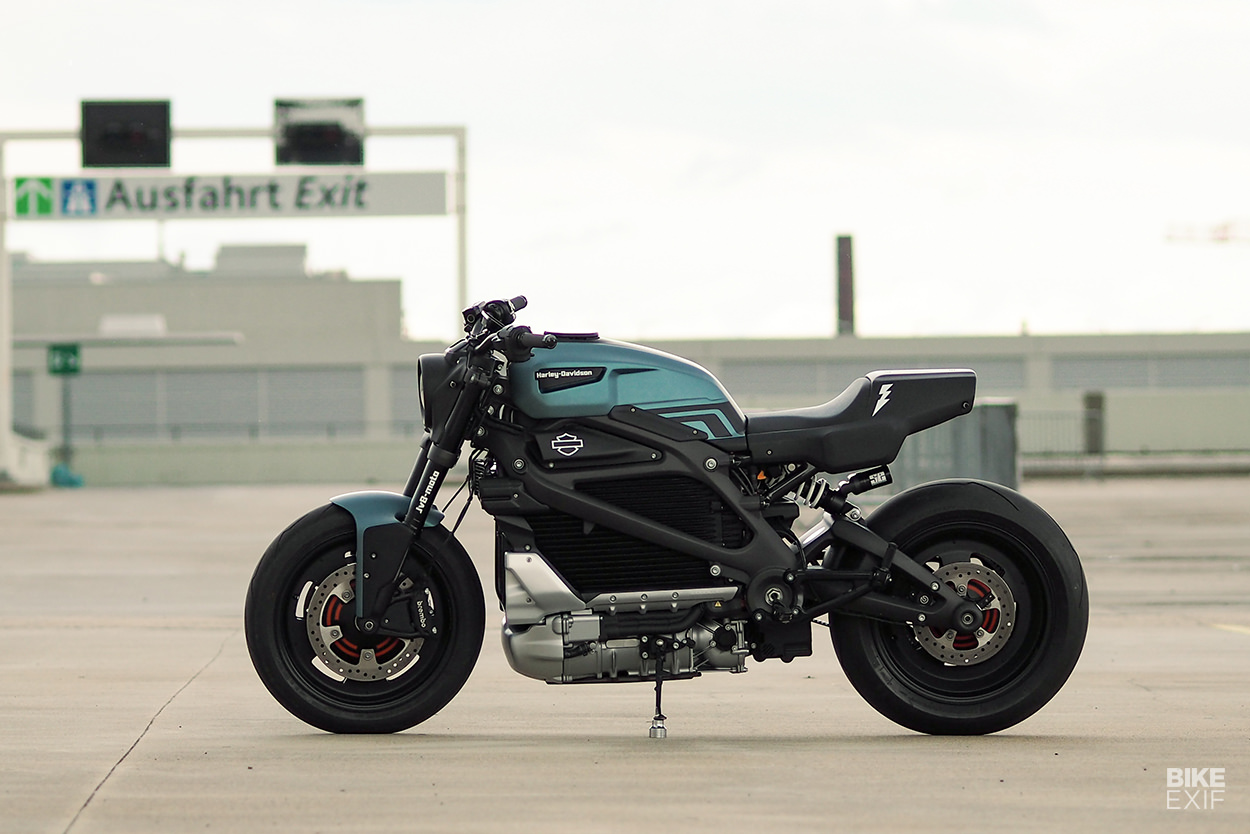 Based in Cologne, Jens is the man behind JVB-moto, one of the most acclaimed European custom shops. His style is clean and distinctive and he has impeccable judgment, which made us keen to know what he thinks of the standard LiveWire.

“When I first rode it, in early 2020, I instantly fell in love,” says Jens. “And when Harley asked if I wanted to build a bike for them, I couldn’t say no.” 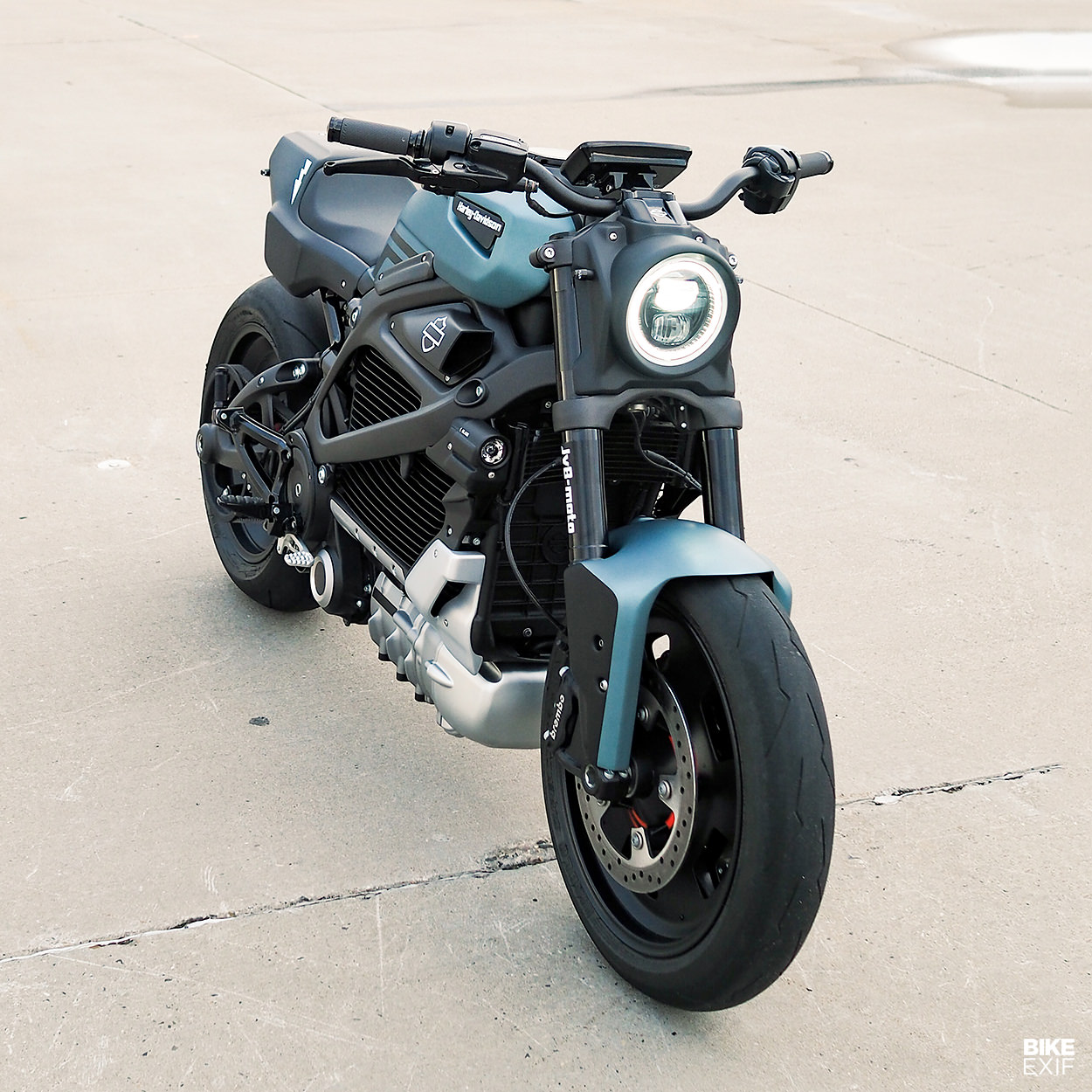 Jens is no blinkered electric fanboy, though. “I don’t think that electric bikes will save the world,” he says. “I understand all the discussions about eco-friendliness and range, and I think it’s complicated and not yet perfect. All I know is that the LiveWire is so much fun!”

Like all JVB-moto builds, this LiveWire is meant to be ridden. “It’s not a piece of art, or made for an exhibition,” says Jens. “It’s made for the road and everyday life.” 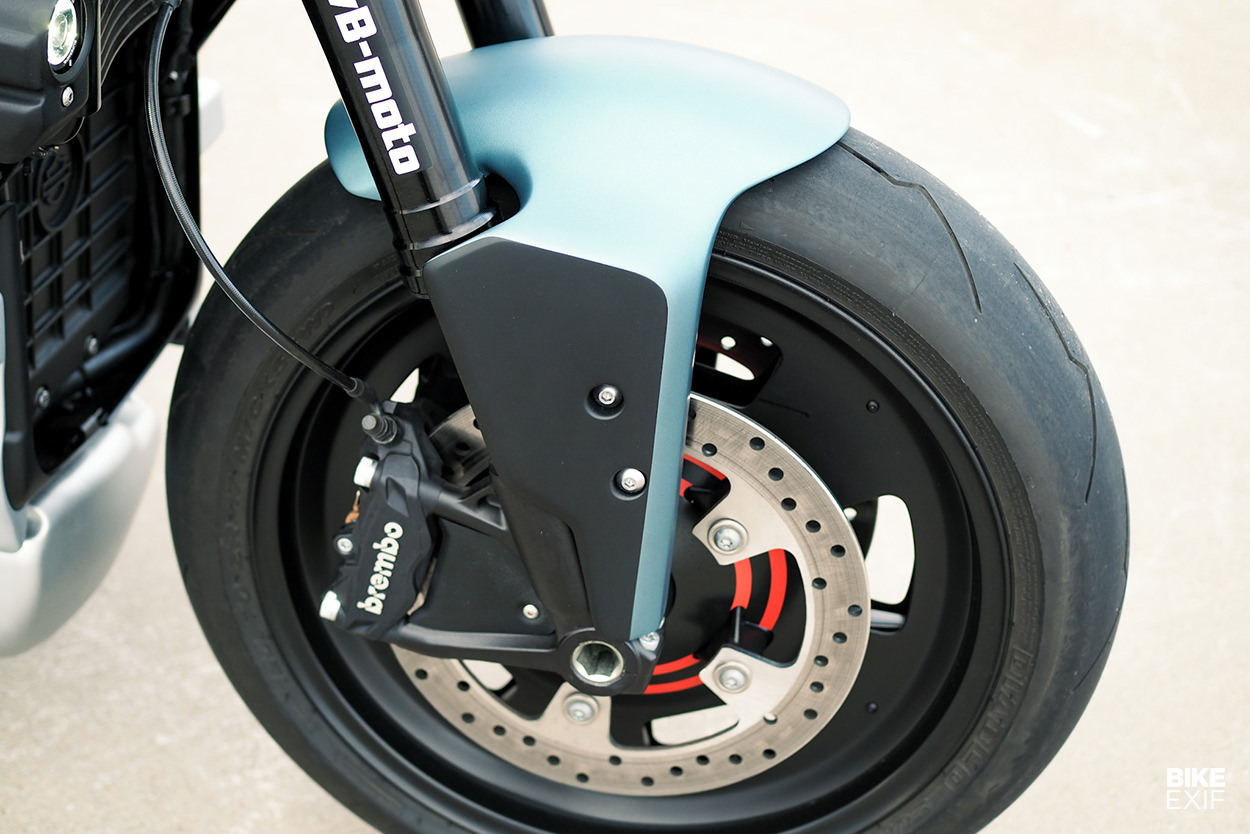 “There are a few really good designs for electric motorcycles out there, but most of what I see is just ‘looking different for the sake of being different.’ Not practical or even rideable.”

Fortunately, Harley didn’t put Jens under any restrictions: they simply wanted a signature JvB-moto design. And Jens wanted the custom elements to be reproducible and road legal in Europe, because he’s planning a small production run of this bike. 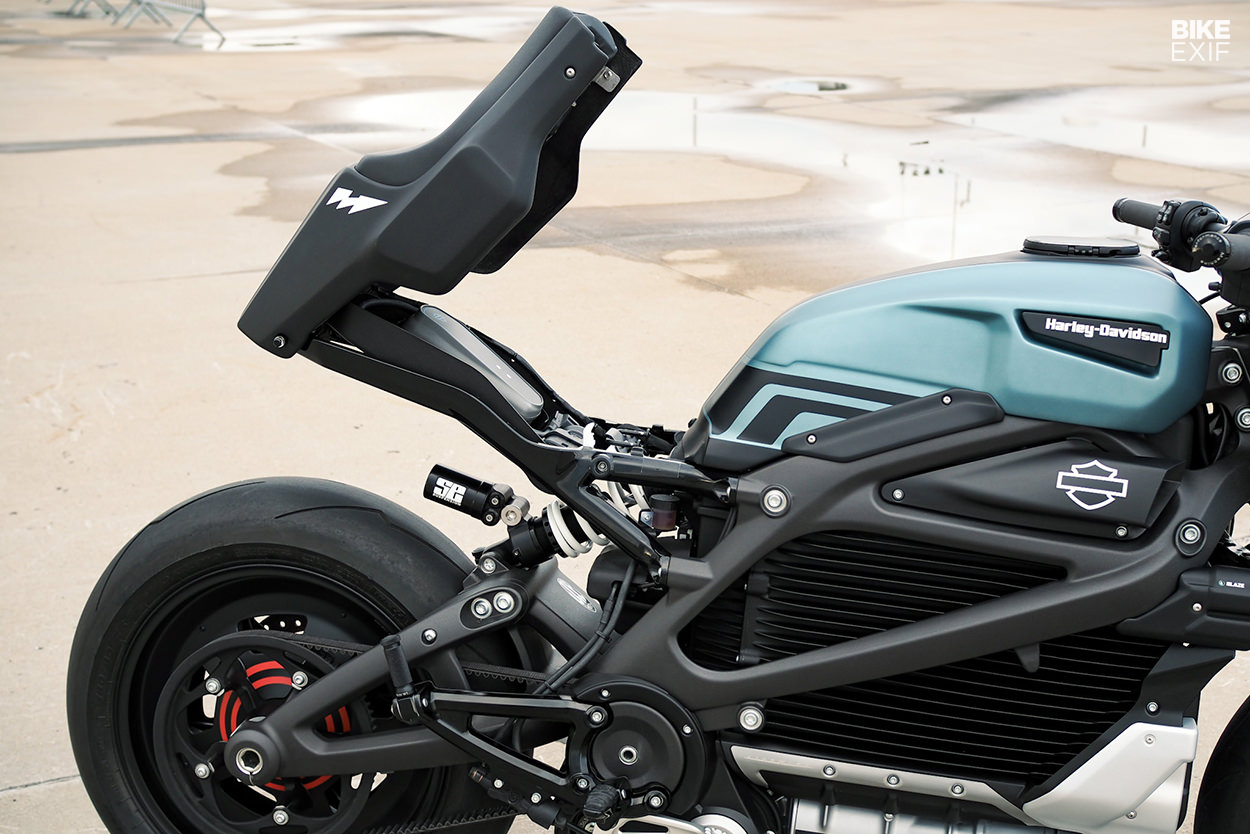 The LiveWire is not the sort of bike you can slot a Motogadget mo.unit into, or swap the dash for an old Smiths speedo. So Jens has focused mostly on new bodywork, including a new ‘fuel tank.’ Unlike the other custom parts, this is fiberglass rather than carbon fiber: “Carbon touching high voltage cables might not be the best idea,” Jens observes wryly.

The seat/tail unit, front fender and tiny ‘air scoops’ under the tank are new; the alloy wheels are toned down with carbon fiber covers for a stealthier vibe. The swoopy mini-fairing fitted by the factory is gone, replaced by a simple nacelle and LED headlight—a setup reminiscent of that fitted to the Kiska-designed Husqvarna Svartpilen 701. 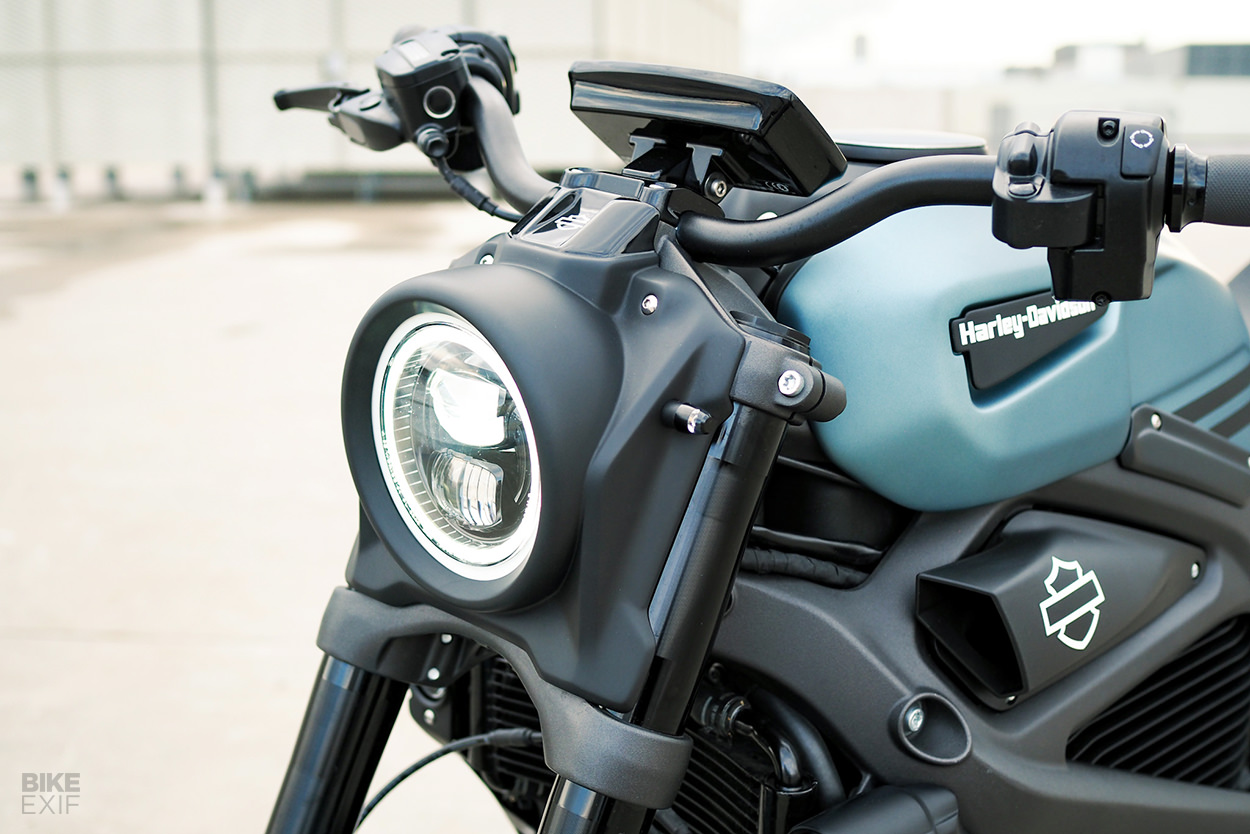 Right behind are new bars from LSL, on custom risers that grip the complex stock dashboard. Jens has also added Performance Machine grips and upgraded the front stoppers with a Pro Brake lever. The headlight is supplemented by a pair of Blaze Laserlights, installed in custom housings on either side of the battery pack.

The dynamics of the LiveWire get a boost from a monoshock upgrade. “The rear shock is made by Sport Evolution,” says Jens. “It’s a former Moto2 race team who are now starting their own high-end suspension line. Very good stuff, made to customers’ specs.” 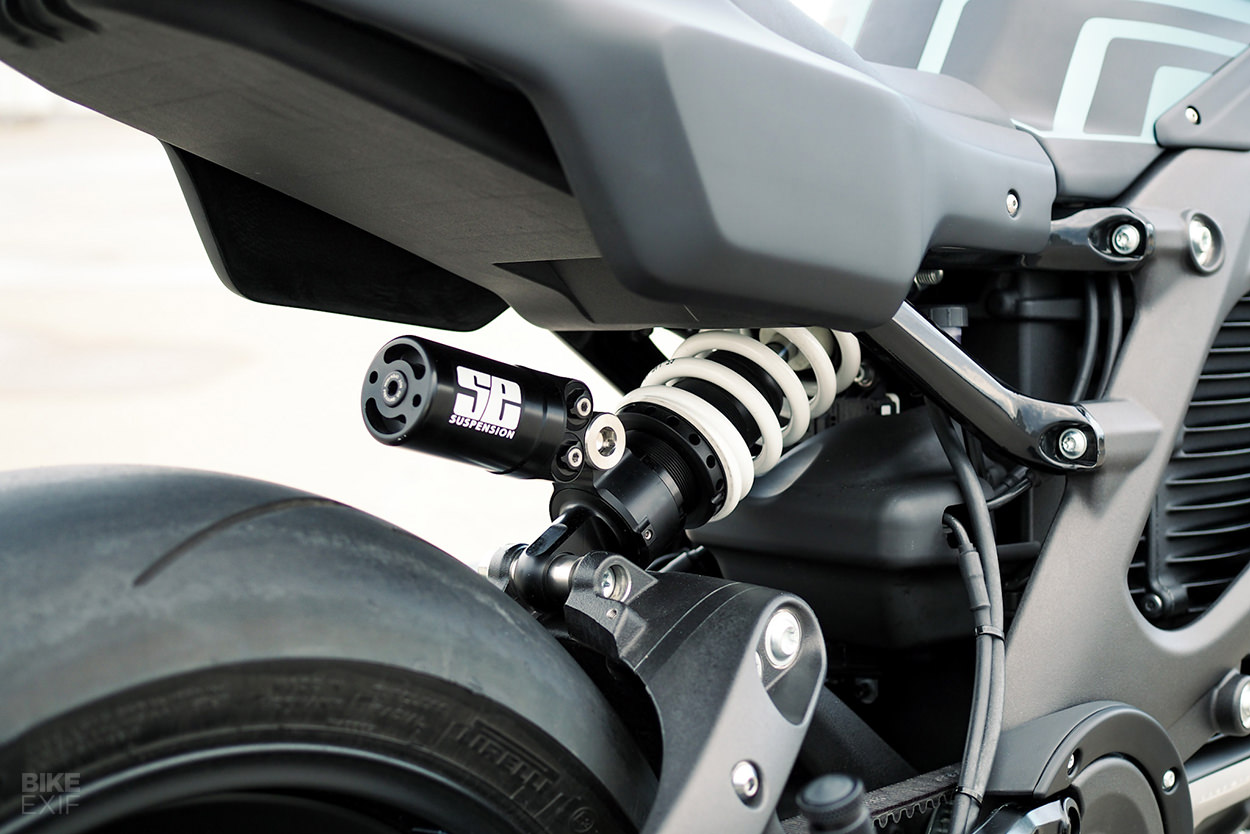 Despite the modern look of this custom, Jens still mostly works analog. “Sketches on the iPad, but after that, everything by hand,” he reveals. “Clay, foam and putty. Lots of dirt. Till the first model is done—then we fabricate molds for the parts to be laminated in fiberglass or carbon.”

It’s only when JvB-moto parts have bigger production runs—such as those sold via KEDO—that Jens gets into 3D modeling. “I guess that will change soon and then I have to catch up quickly!” 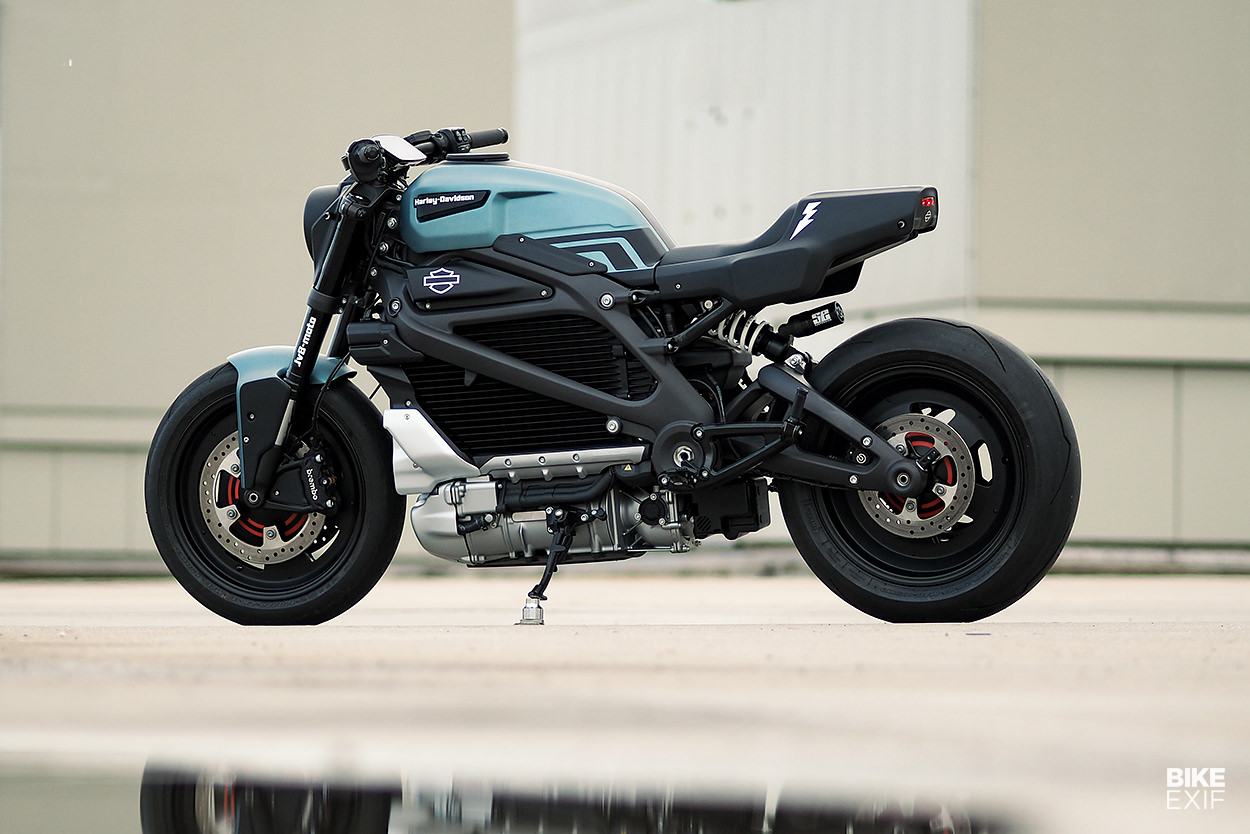 He’s planning a run of custom LiveWires, rather than selling kits or individual parts. And with secondhand machines becoming affordable—they’re dipping down towards the $20k mark in the US—that would make good financial sense for all concerned. We can feel the LiveWire edging closer towards cult status by the day…