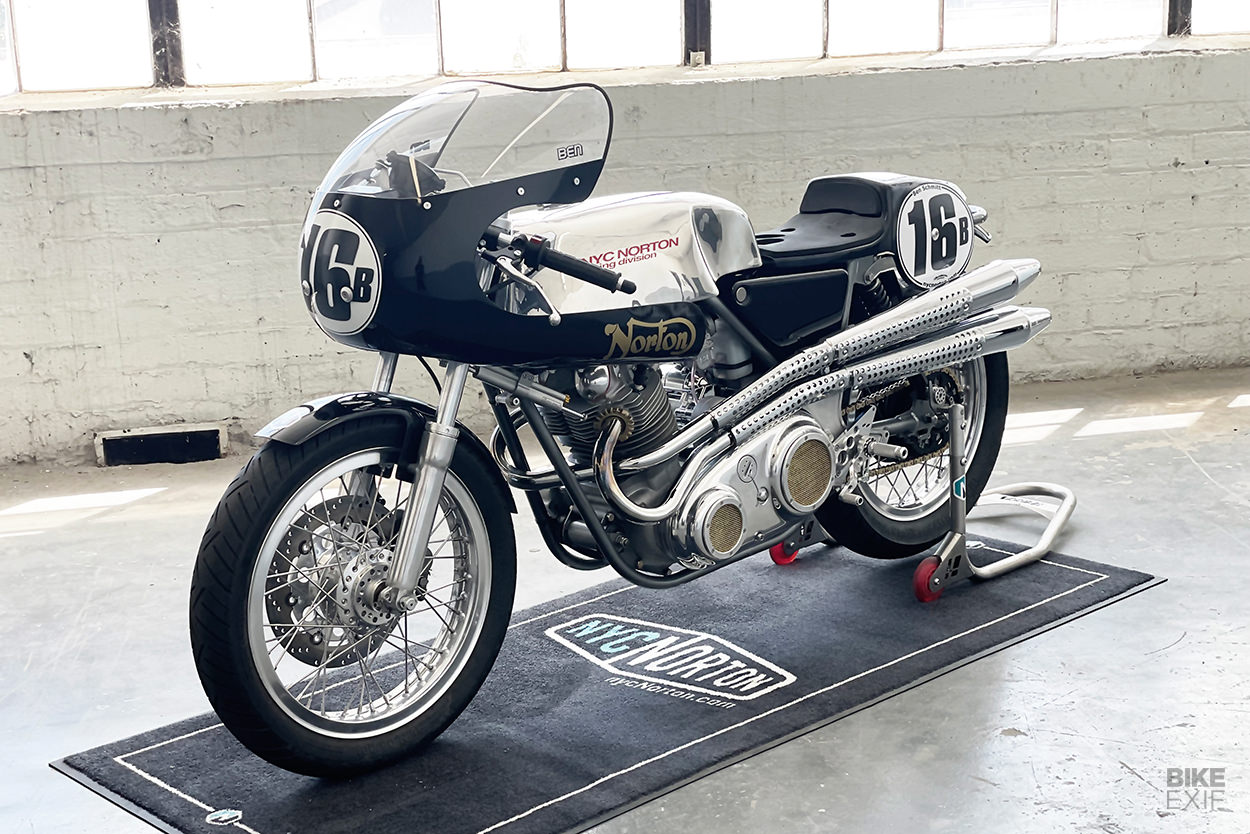 If there’s anything we love more than a classic racebike, it’s one with a good story behind it. And this gleaming Commando ‘S’ Roadster from NYC Norton comes with a very unusual history indeed.

NYC Norton is run by the affable and knowledgeable Kenny Cummings. He knows his way around a racetrack as well as old Brit iron, and he’s pretty much seen it all. But the manner in which this S-type arrived in his shop still caused his eyebrows to lift a notch. 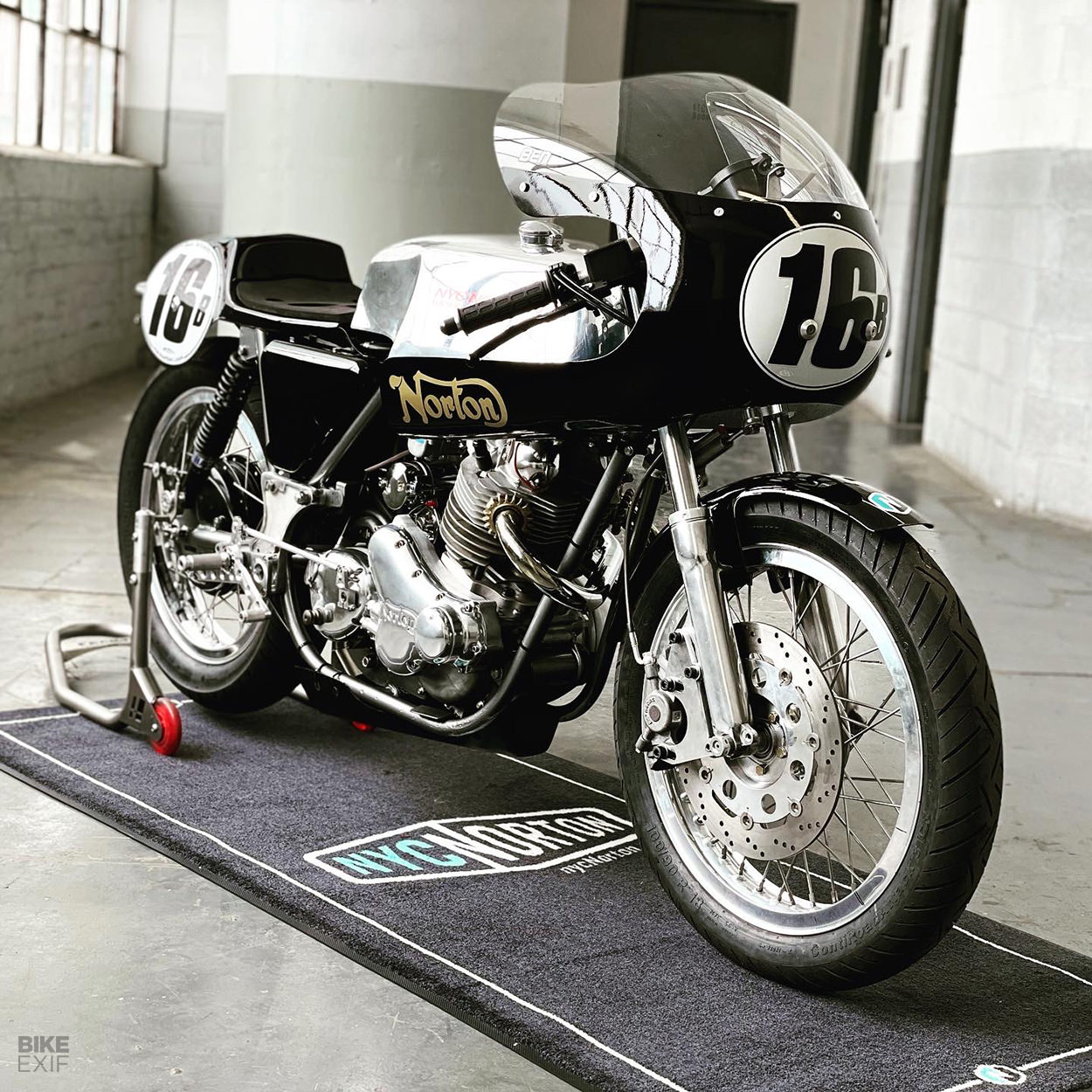 “We often get enquiries from folks with old Nortons who don’t know what to do with them,” says Kenny. “Either they had put a bike away, years ago, and forgot about it or they inherited one.”

“The first question is always, ‘What would it cost to get it running?’ The next is, ‘What’s it worth, as is?’” 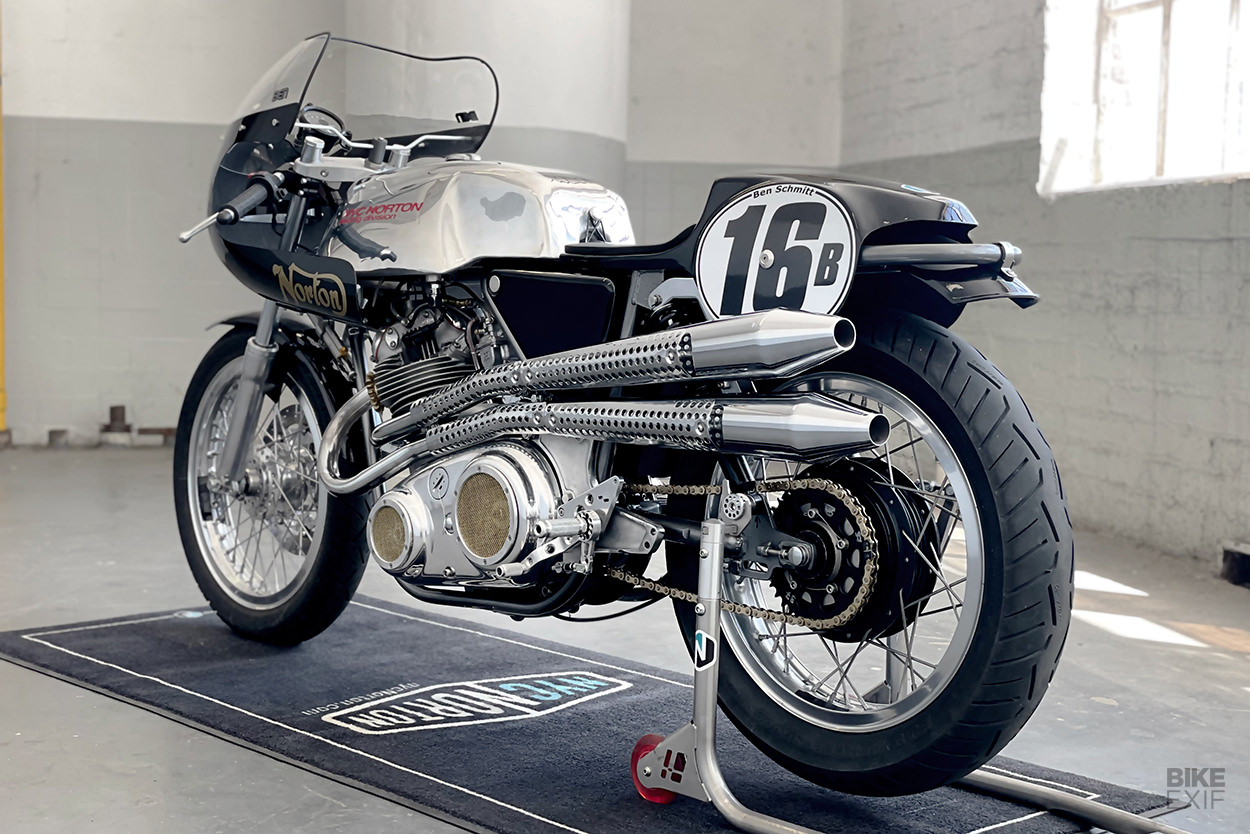 A few years ago, Kenny received an email from a woman who identified herself as ‘Tina.’ She had a Norton she wanted to sell. “I asked her to send photos, and I received some pictures from a woman with a different name—which looked as if they’d been taken with a flip phone in 1999. A bit suspect…”

The bike was intact, as far as Kenny could tell, but was very grubby. It had most likely started life as a 1970 S-Type. Then he got a call from a ‘Tina-Lina.’ 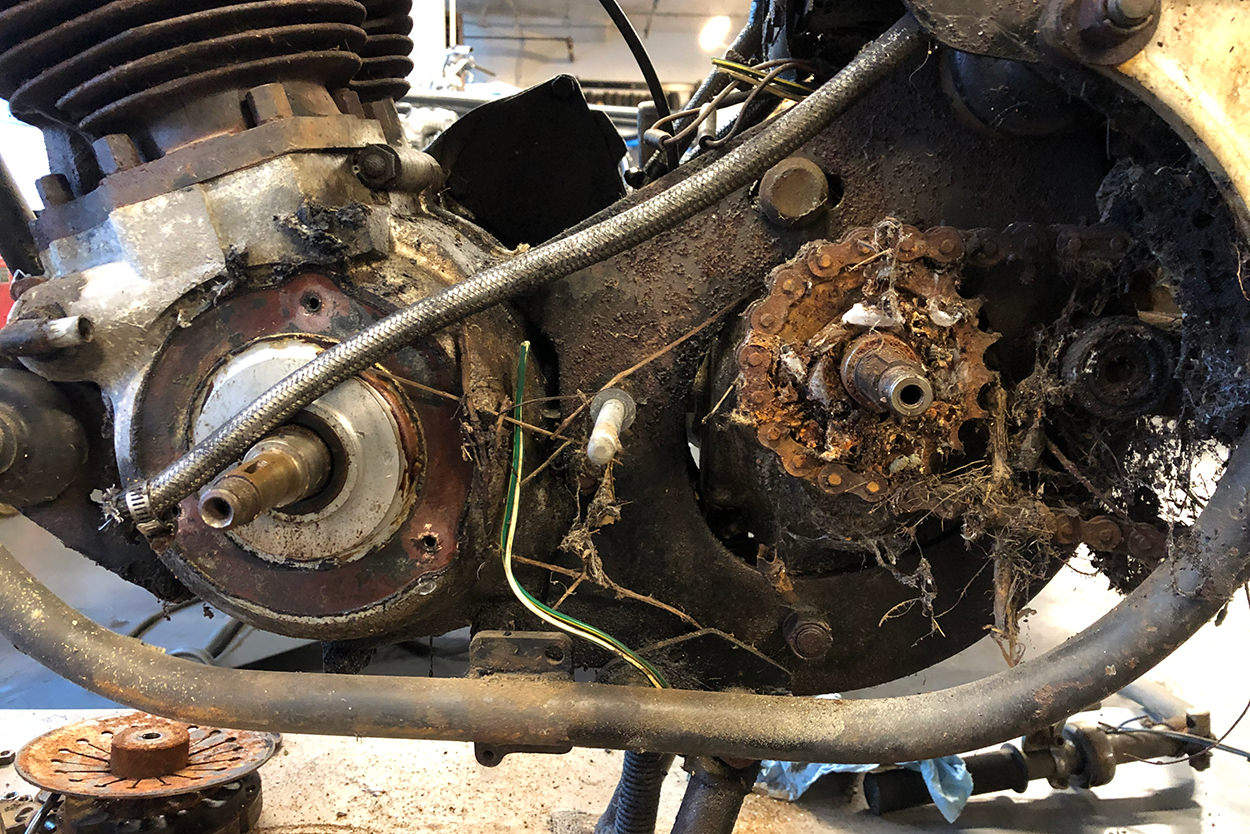 “This was not a typical shop call. She spoke in whispery, hushed tones, and told me that the bike had belonged to her dear deceased husband. It had been languishing in her New Jersey backyard for many years, but she had the old registration and it seemed legit—albeit not entirely of this earth.”

Kenny arranged to meet and when he arrived at the address, the door was opened by a petite woman with big hair, a long sparkly dress, and lace-up sandals. She led Kenny to her backyard, where the bike was lying on its side with weeds growing through it. 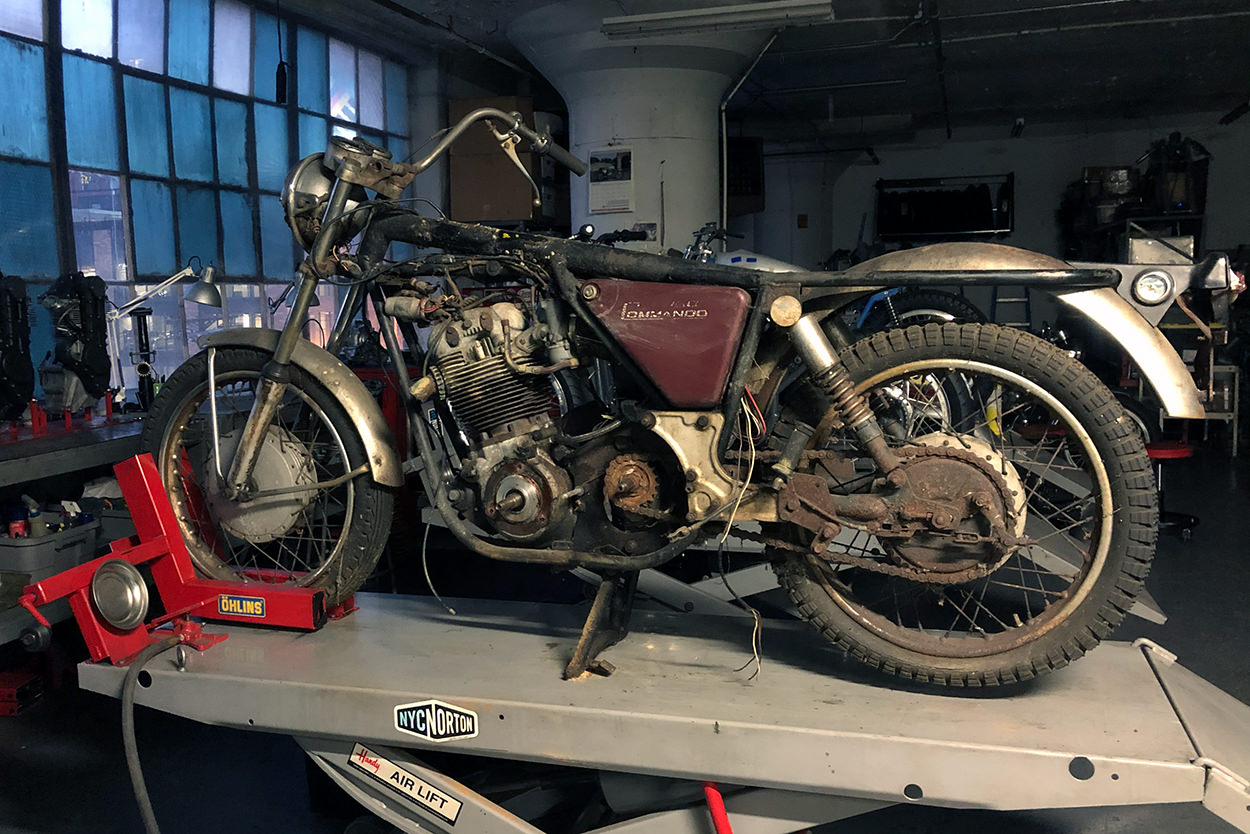 “As I walked up to this sad sight, her neighbor came hobbling over, wanting to be part of the action,” Kenny recalls. “Tina revealed that he was looking for cash to help load the bike in the van.” The same neighbor had tried to move the bike a couple of years earlier, by tying it to his pickup truck and dragging it across the yard, breaking off bars and bodywork in the process.

“I started to fear that I wasn’t going to get out alive,” Kenny says. “And the bike wasn’t moving—the brake shoes were frozen to the drums, rusty water was leaking from the gearbox, and the entire machine was covered in oil, dirt, and bugs.”

Kenny gave Neighbor Man some cash and they dead-lifted the bike into the back of the NYC Norton van. “I immediately hosed it down with Brakleen to kill as many parasites as possible and not infest the rig.” 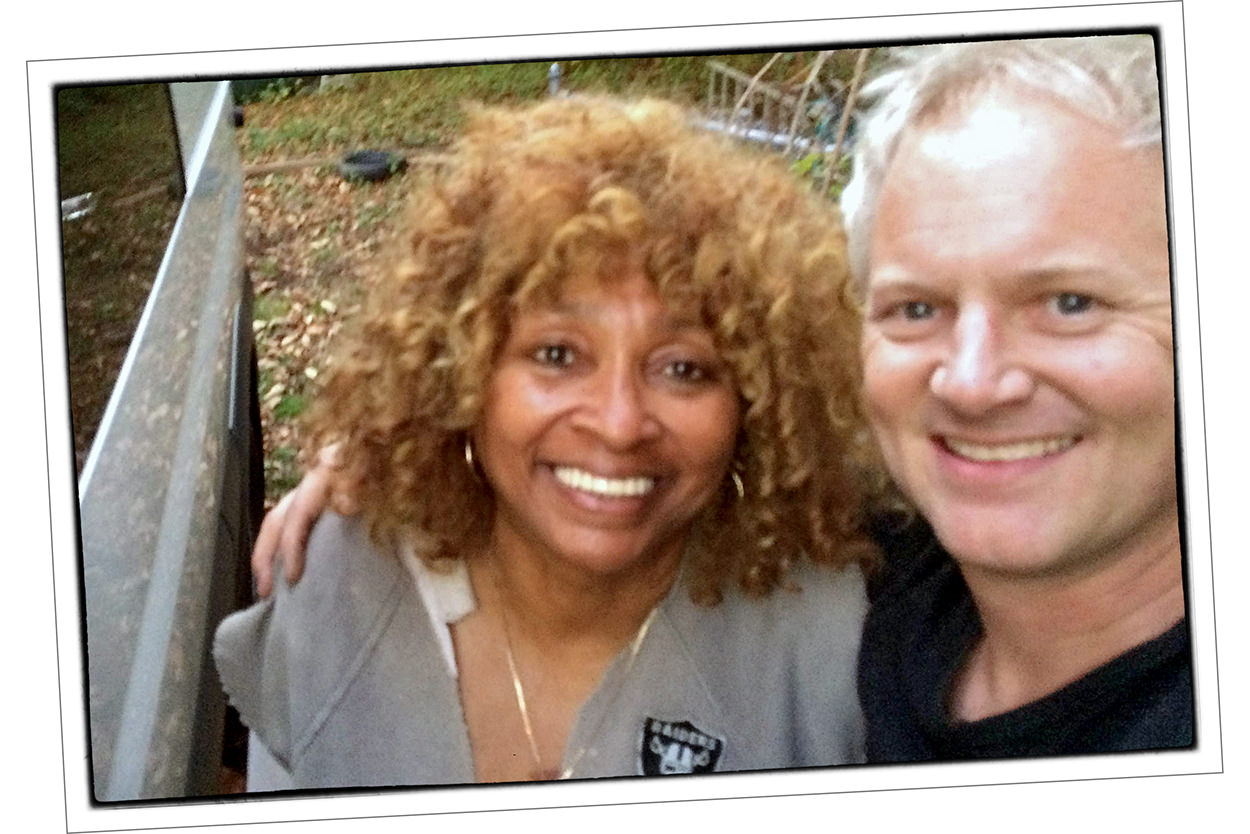 Kenny paid Tina cash for the bike, and she was pleased. Spirits were high. But as he was about to leave, she asked why he hadn’t asked for her autograph. She explained that she was the most famous Tina Turner impersonator in the world. “How could I not know? I had her sign the bill of sale and snapped a selfie for proof.”

Back at the workshop, the NYC Norton crew hosed the bike down with even more toxic solvents, to eliminate any remaining living creatures that might still infest the works. Then it made its home in the corner, where it would await its day. 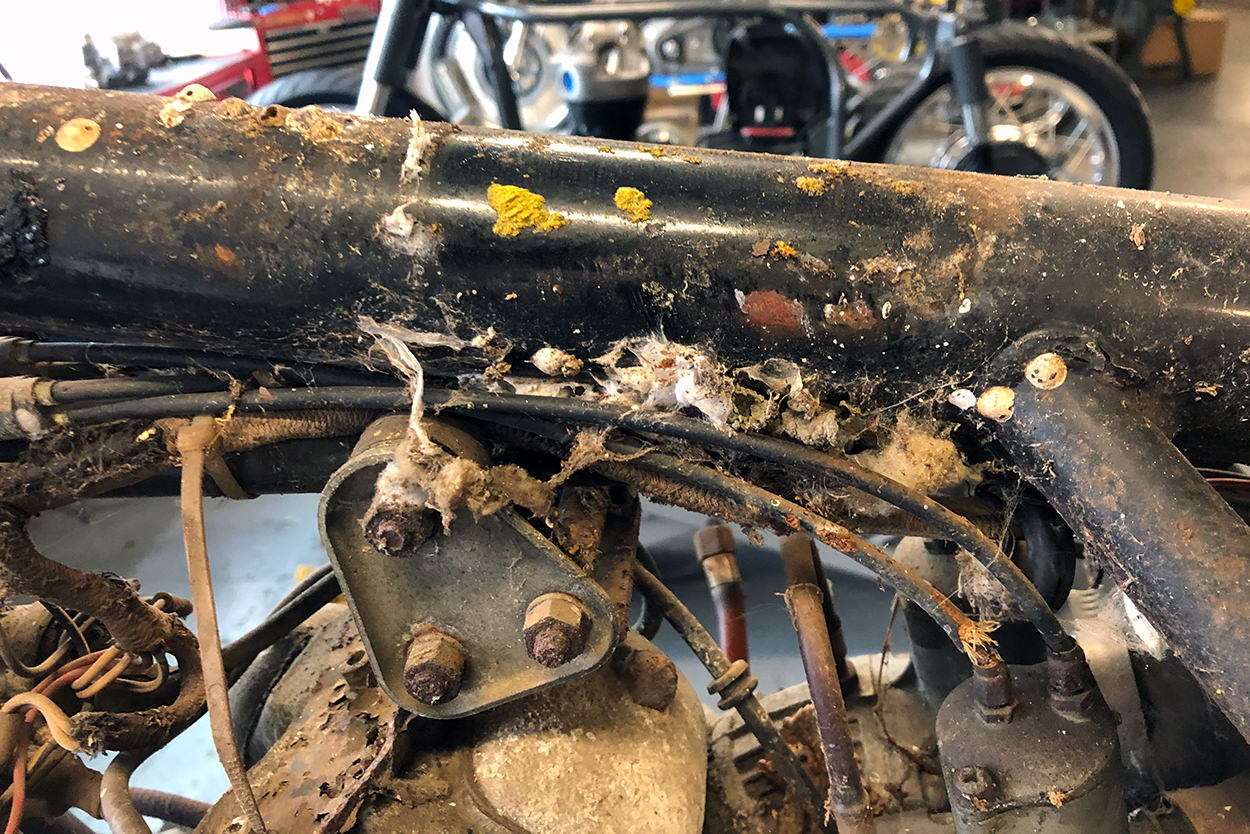 That day came last year, via a call from a Kansas City man named Ben Schmitt. Ben had raced with AHRMA several years earlier, and wanted a clean slate for getting back on the track. He liked the concept of an NYC Norton bike build and race support, so a plan was hatched.

So it needed to be the BEARS (British European American Racing Series) class: not a starter class, but one with skilled riders who would give Ben the necessary space as he gained seat time and confidence. 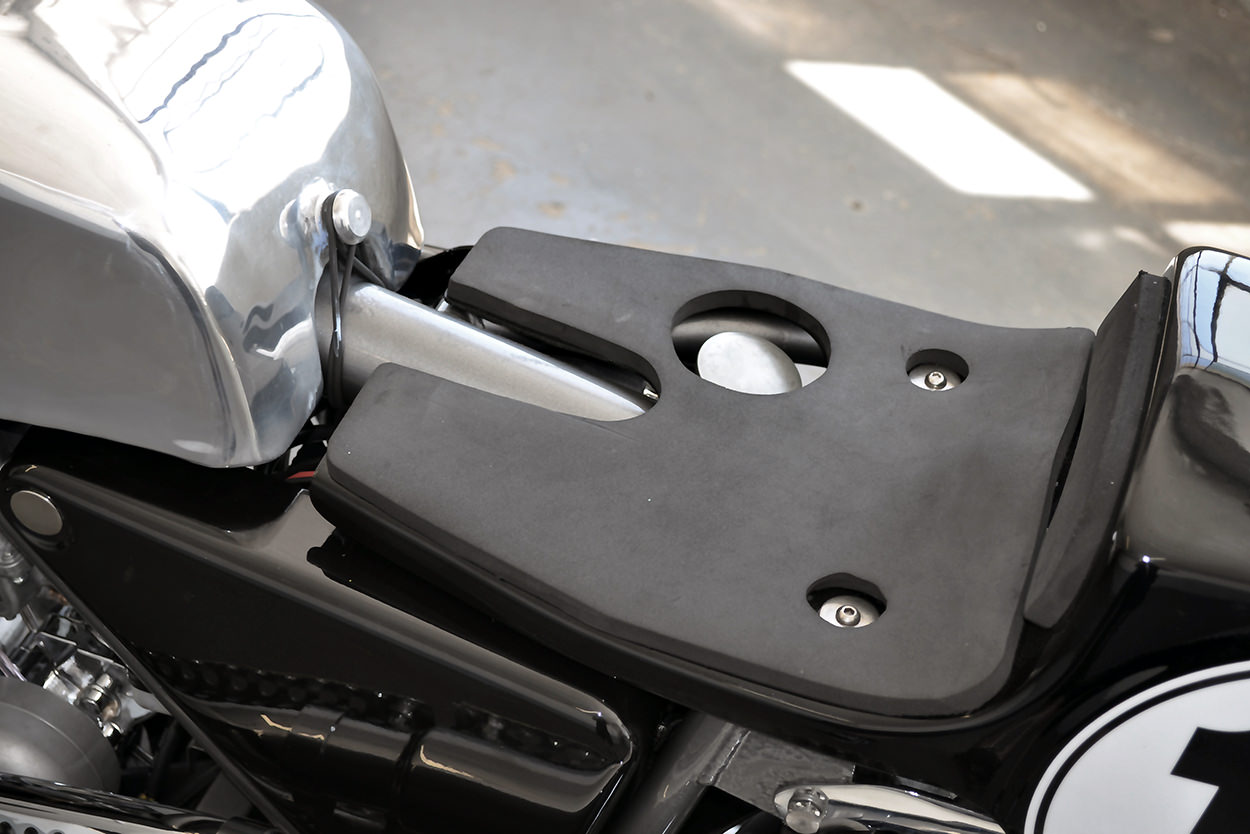 The caveat was that the Norton had to have an electric start, and Ben wanted it to be converted back to street trim if the racing didn’t pan out. His eyes wandered across to the mythical old Commando S-type in the corner. The phoenix would rise.

The Norton was completely dismantled and inventoried—which took more effort than usual, because of all the rust and corrosion. And some of the components were too far-gone to be reused.

The gearbox, which had been full of swamp water for years, was locked solid; the brake drums were toast; and the fork tubes were frozen in the yokes. (The rare S-Type yokes now sit in a quiet spot in the shop, waiting for Kenny to unstick the tubes and bring them back to life.) 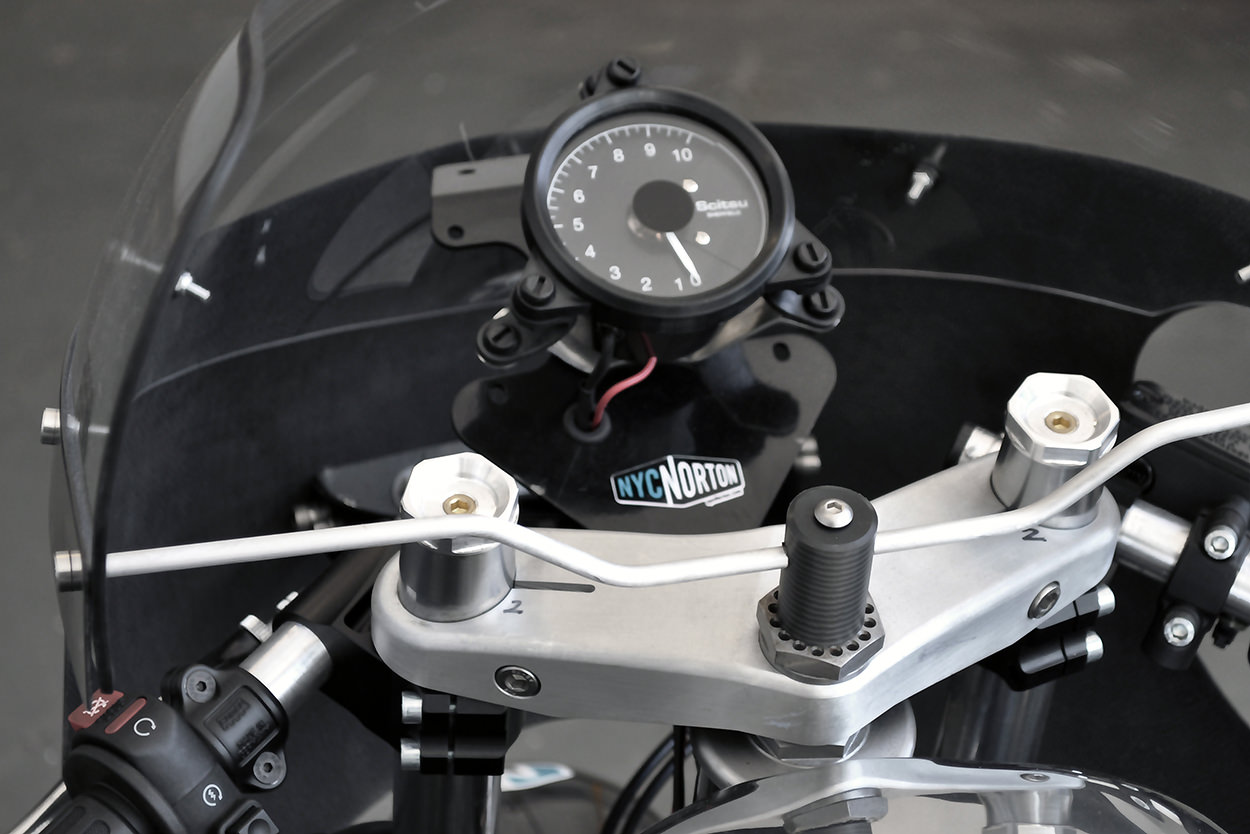 Still, the frame and swingarm were in great shape, albeit with some mild corrosion on one side. The engine was surprisingly good inside, most likely due to the fact that it was covered in a protective layer of oil and crud. There were some period mods done to the engine—“someone had been in there”—but all in all, it was a very usable base.

During the rebuild, Kenny got a call from a friend who had a Steve Maney cylinder and steel flywheel available. These are incredibly rare finds, so Kenny added them to the build. Standard-length Carrillo conrods and JE pistons (“our championship winning combo”) were also fitted, along with a Webcam 12s (Combat-ish) cam. Fuel is metered by a pair of Mikuni VM34 carbs.

“A squish band relief was also machined in the pistons and the head skimmed, allowing higher compression,” says Kenny. “But we kept the ratio at 10:1, so the bike can be run on hi-octane pump gas—keeping it streetable.” 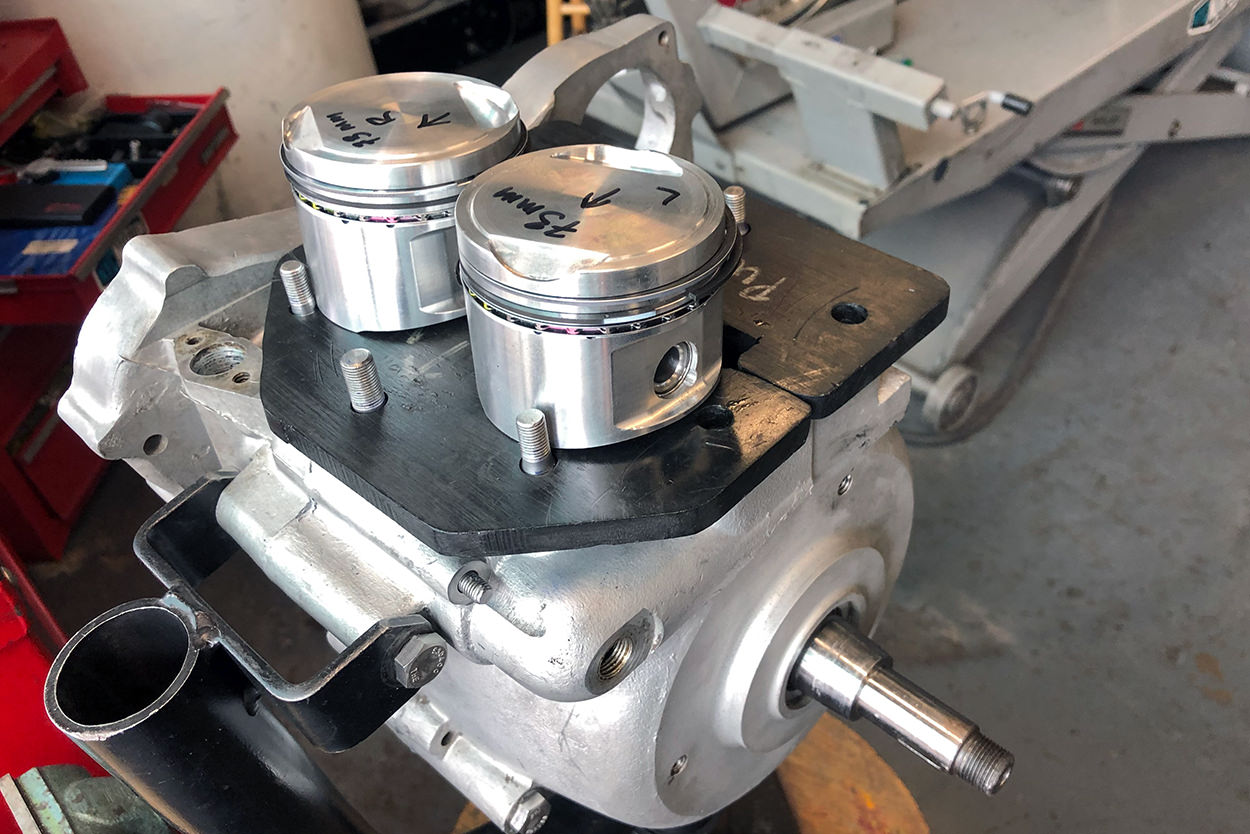 The valve train is stock, with Kibblewhite Black Diamond valves and bronze guides. Revs are measured by a Scitsu inductive tacho, and ignition is via a Pazon Sure-Fire module. One can safely bet that this Commando will be faster in the 0-60 sprint than a factory-fresh bike, which recorded 4.2 seconds in a Cycle World road test.

It was now time to address the chassis, and get it to work with 18-inch wheels to allow for good race rubber. Kenny selected ContiRoadAttack 3 CR racing radials, in 100/90 front and 130/80 rear sizes. Excel flanged alloy rims were laced with Buchanan’s spokes.

The rear hub is a Grimeca drum, complete with a cush drive and a complement of 520 sprockets that permit gearing changes for different circuits. The front is a later-model Commando hub running an 11.5-inch disk and an AP racing caliper, pumped by a Brembo master cylinder. 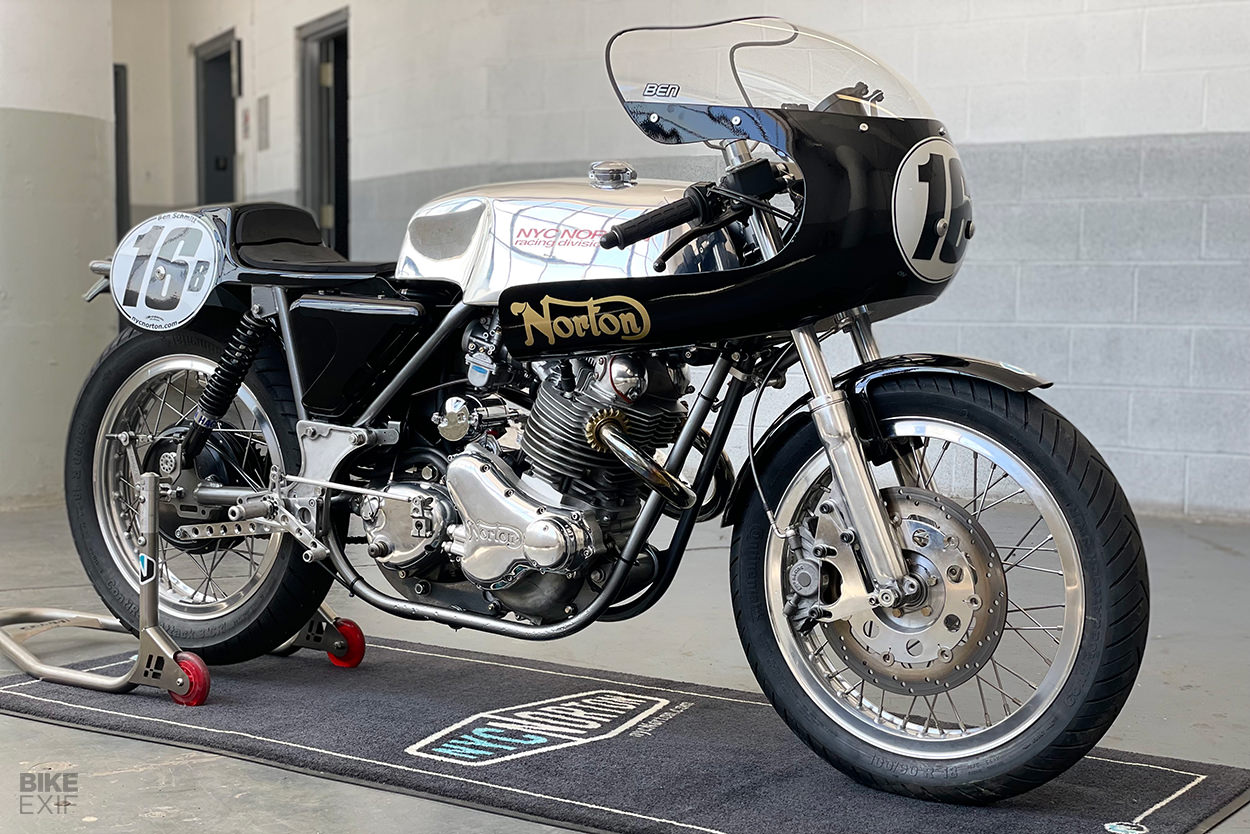 The front suspension is adjustable: NYC Norton have installed parallel-bore pinch-bolt yokes, so the front height can be tweaked for perfect turn-in. Cosentino cartridge internals run inside the forks, along with the Cosentino/NYC Norton Teflon bushings. (“The front end is a dream and completely tunable to rider’s specs,” says Kenny.) The shocks are Hagon Classics.

The frame tubing is unmodified, but the isolastic rubber bushes have been converted to the later vernier style and set on the tight side. A rod-end headsteady is also used, since it’s necessary to retain solid handling on a rubber-mounted drive train. An NYC Norton rearset kit was bolted straight up to the stock Z-plates. 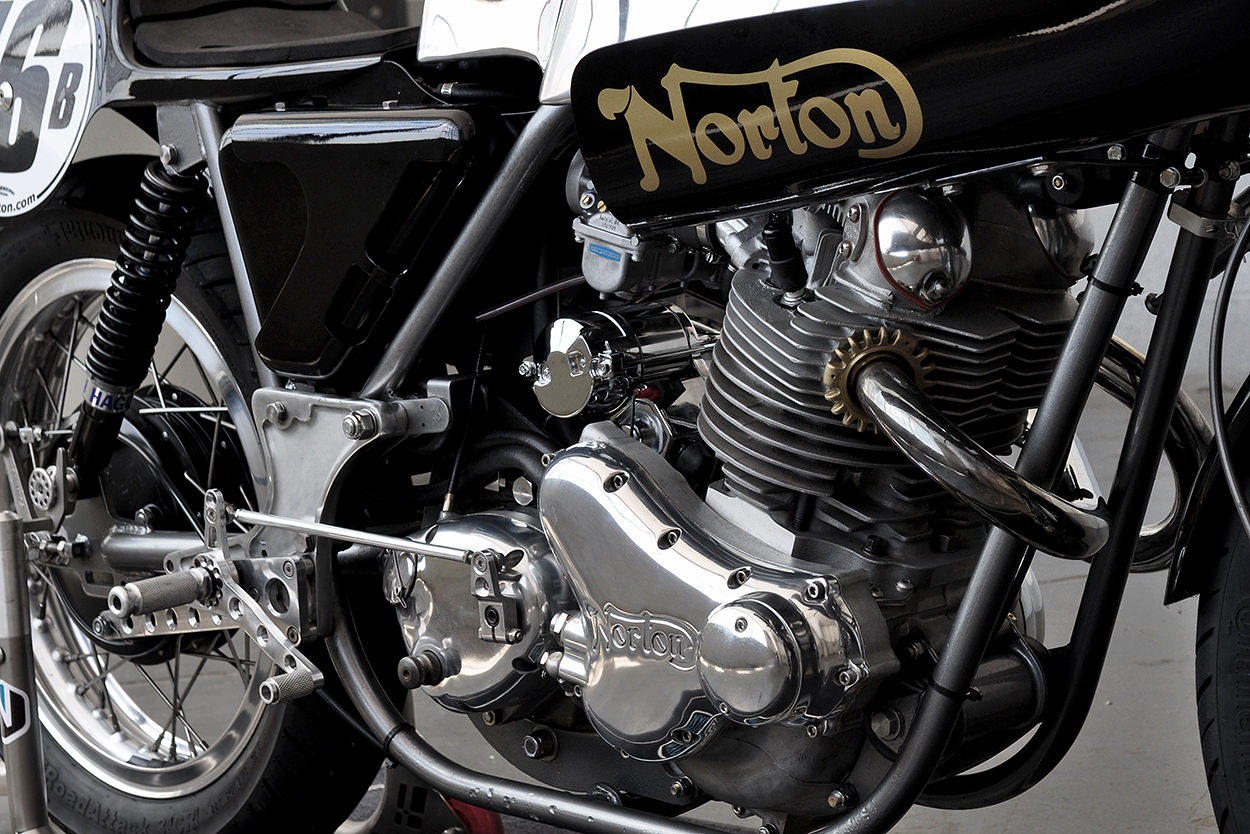 Because the gearbox internals were unusable, NYC Norton have installed a four-speed close ratio gear cluster, tucked into a modified Heavy Duty AMC-style shell. Barnett friction plates in the 850-style clutch hang off the mainshaft.

“One of Ben’s early requests was to add a reliable electric start,” says Kenny. “After a call to our dear friend Matt Rambow, we had our hands on a beautiful Colorado Norton Works electric start kit.”

The CNW starter kits are fitted to almost every NYC Norton street build, and the strong belt drive and well engineered but relatively simple componentry made this an easy choice for the race bike. A 21Ah Shorai battery and updated 180W alternator finish off the kit. 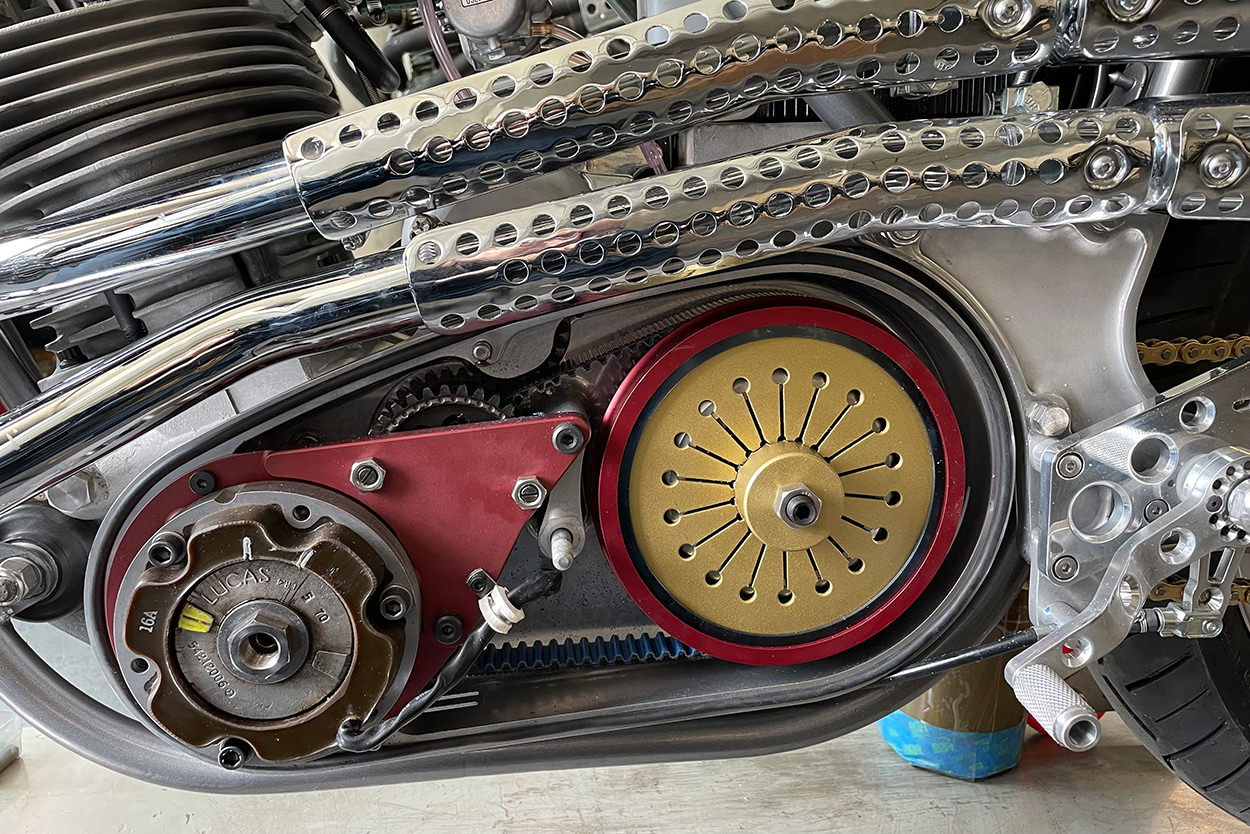 But for every action there is a reaction: fitting a larger battery meant switching out the early Commando center-mount oil tank to a later-model side mount, with a later-style battery tray.

This was a sound decision. “The side-mount tank has a breather return tapped in a higher location than the older style,” says Kenny. “It reduces potential agitation of the engine oil—from positive breathing pulses from the reed breather, whilst running at sustained high rpm.”

For the gas tank, NYC Norton’s regular hammer man turned out a Production Racer style aluminum piece. Then came a modified PR seat and slim fairing, trimmed to be low profile but effective. 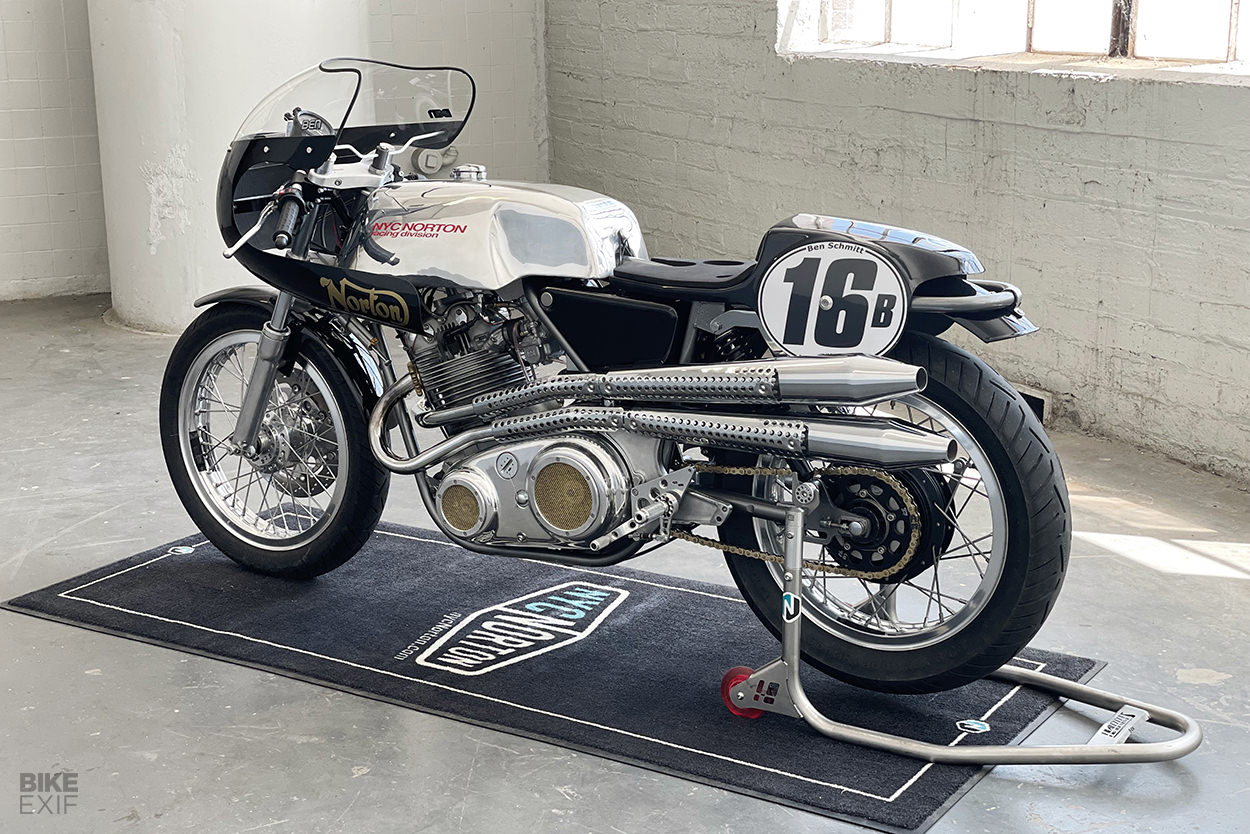 And finally—because the bike started life as an S-type—Ben requested an S-Type high-level exhaust. “The dyno shows this exhaust gives fantastic torque without a huge loss up top, which is paramount to a good short-circuit racer such as this,” says Kenny.

When the bike finally rolled off the lift and Kenny and his crew could get perspective, they knew it was a winner. The Commando made its debut at the Heartland track in Topeka, Kansas last month, and when Ben arrived in the paddock and finally laid eyes on it, he was over the moon.

He took the racing school on Friday, and was out on the track, tearing it up in the BEARS class, on Saturday and Sunday. “A happy dude, and we were, too,” says Kenny. “I’m sure Tina-Lina would be proud.” 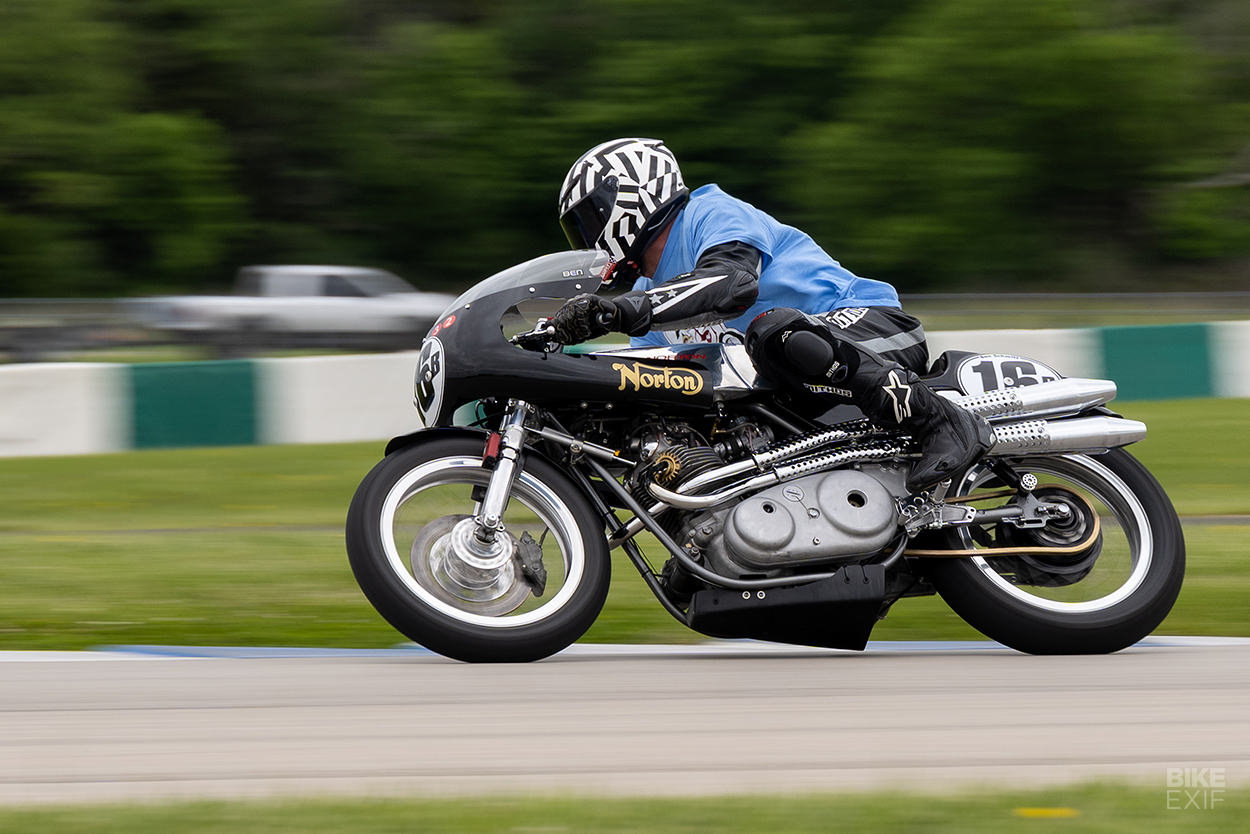