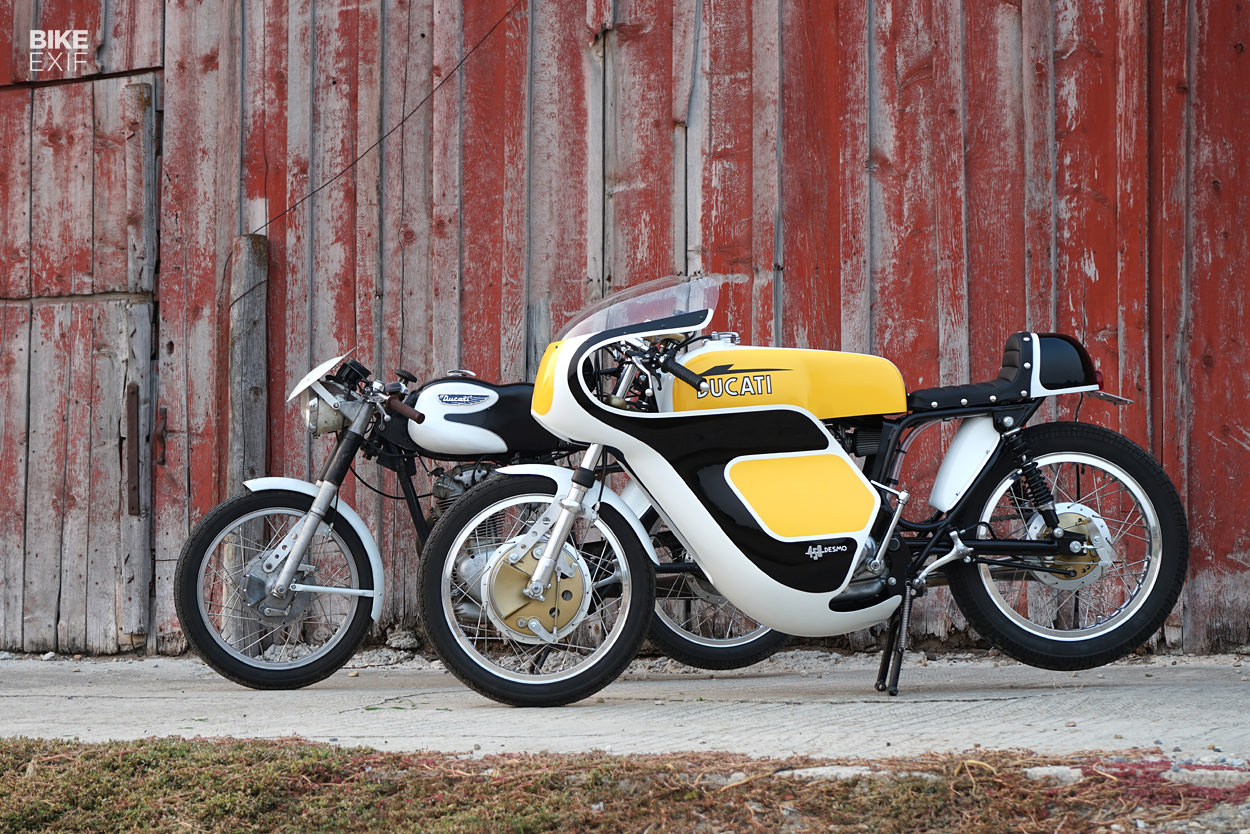 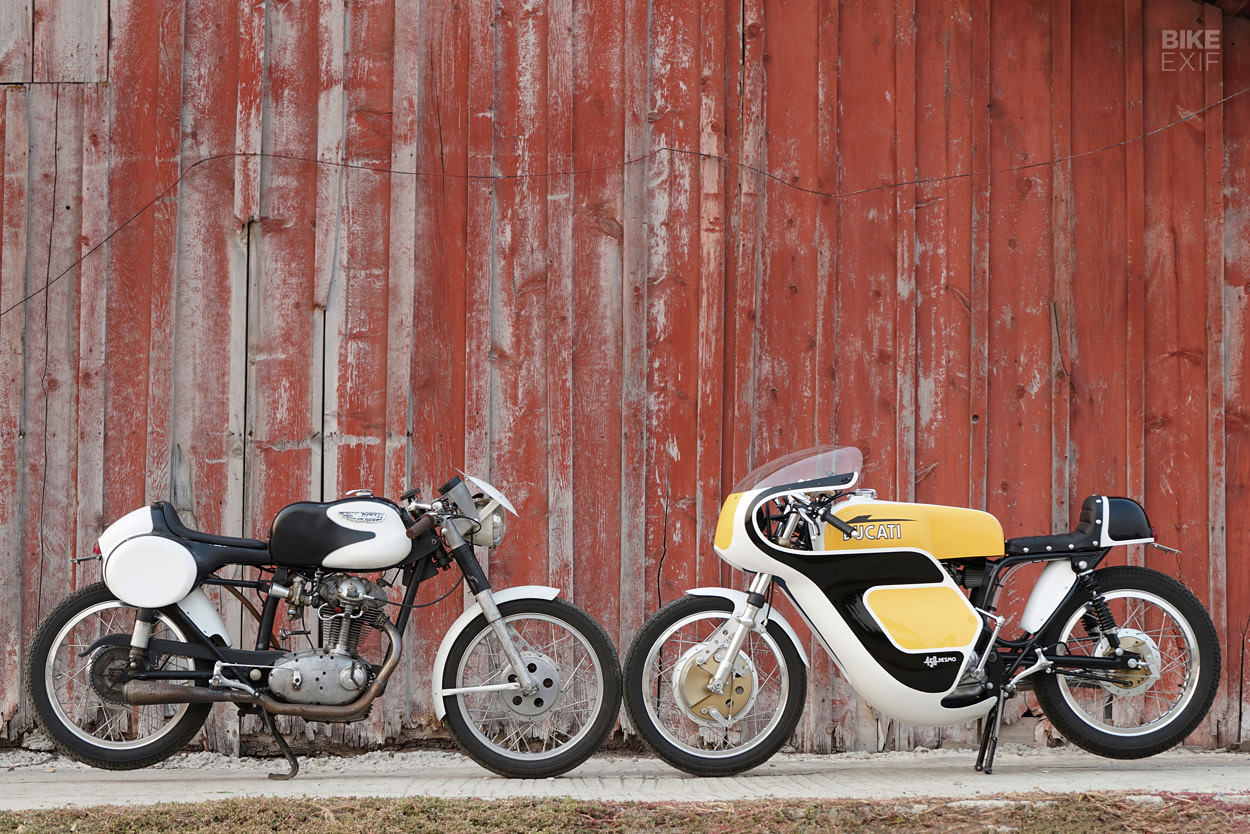 “I built both these bikes for myself,” Mike tells us. “The shop is planning an invite-only Italian Singles tour next year, and we’re hoping to get some of our old builds back in town for that event. Maybe we’ll call it the Ida-lian Giro.”

The 250’s a bike that Mike’s had for a while, and was originally pieced together from spare parts that were pulled off the shelf for another project. “The pile of parts left over from that resto was in the shop,” says Mike, “and I recognized that all the patina looked really balanced. I took that pile and assembled it into a running old survivor looking thing.” 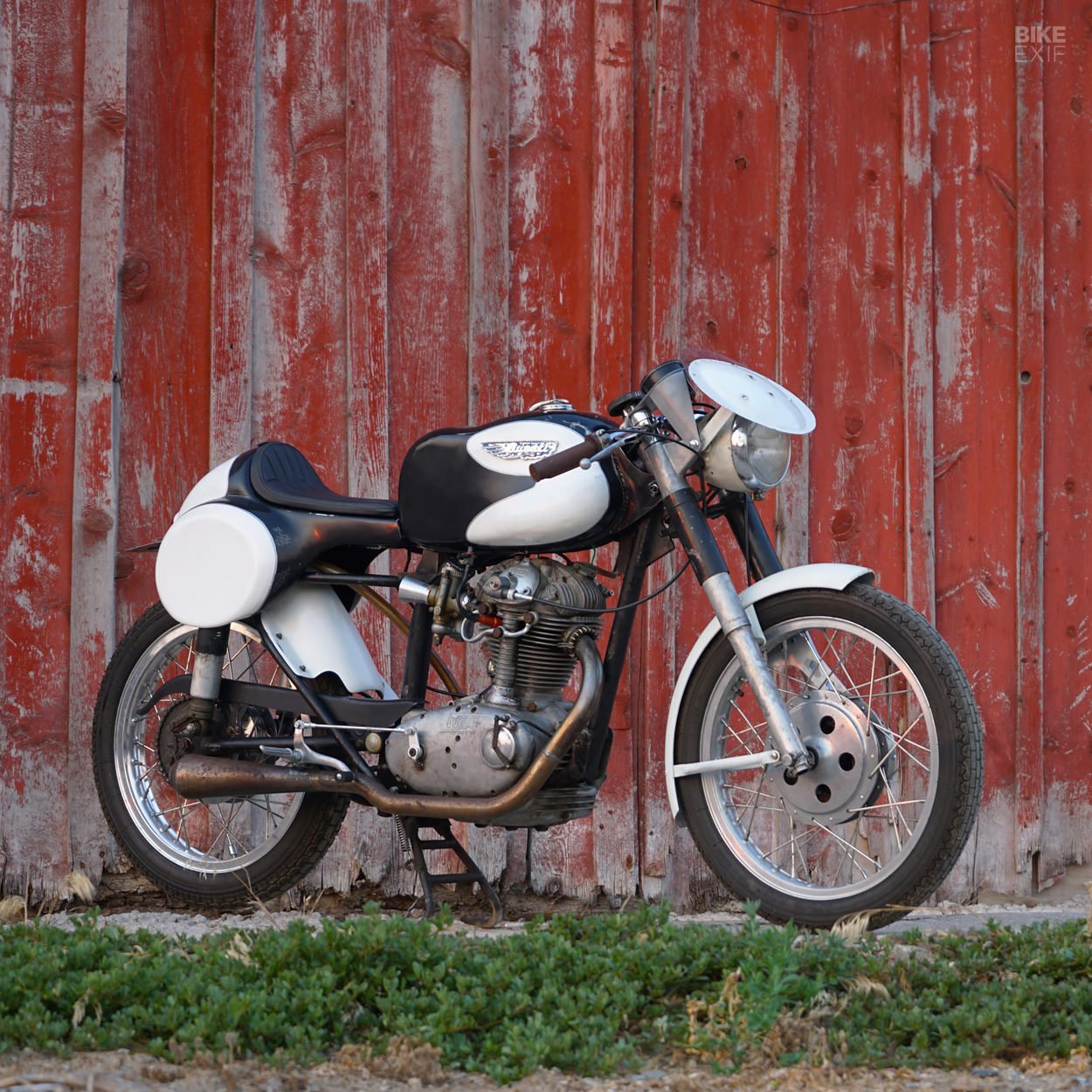 Mike ran the 250 like that for a few years, then decided it deserved more attention. He took a wabi-sabi approach on the build—a Japanese design philosophy that finds beauty in imperfection. Anything that was already well worn was left alone, and even the new paint was aged to match.

The first job on the 250 was finding the right ‘jelly mold’ fuel tank to base the design around. “Luke found a misfit tank off an Argentinian two-stroke,” says Mike. “I added receivers for Ducati emblem fasteners, re-shaped the emblems to fit, welded a Ducati filler neck to accept an old Ducati cap, and fabbed up the front and rear mounting tabs.” 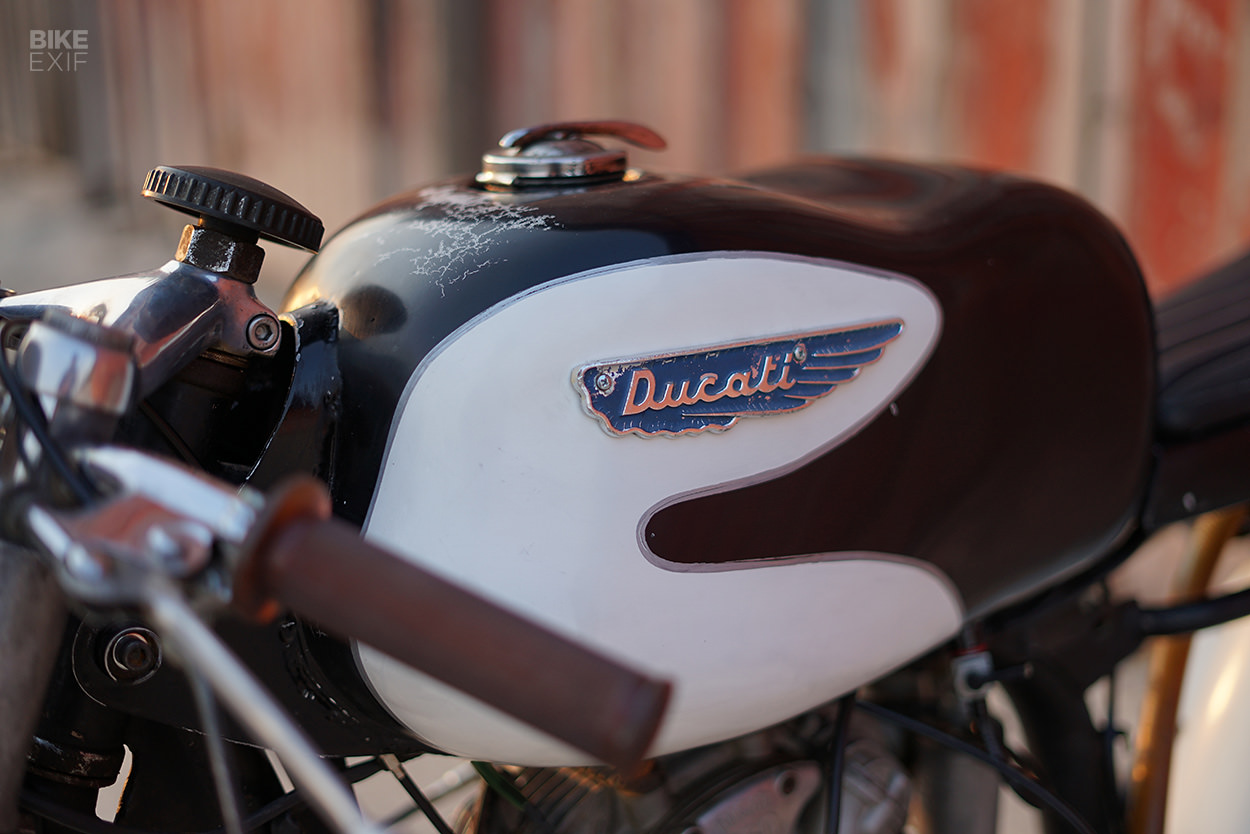 Next, Mike shaped a ‘jelly mold’ tail to complement the tank, while Interior Revolutions handled the seat upholstery. The front fender and rear splashguard were shaped using a mold that Union has used on previous 250 builds.

The front wheel uses a Montesa hub, a custom axle and spacers, and an ‘unknown survivor’ rim. The rear rim is a Borrani, and the tires are from Heidenau. The suspension is stock but the wiring is new—Luke re-did it top to bottom, and installed an electronic ignition. 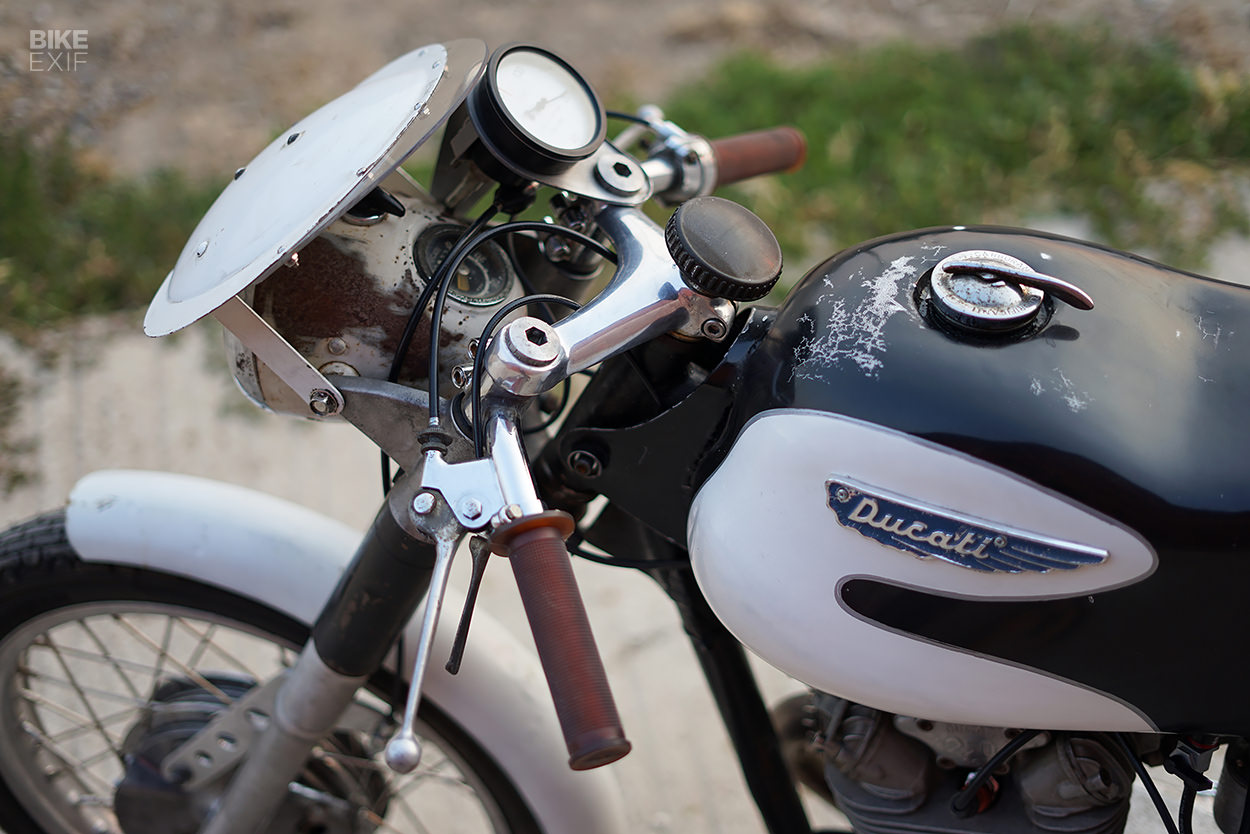 Mike built clip-ons out of old Harley-Davidson spring handlebars, and added Union’s own sandcast rear-sets. The exhaust was welded up from rusty parts, the front brake stop’s been fashioned from a leftover piece of aluminum, and the center stand’s a repurposed Ducati 160 item. The reproduction tachometer is the one gleaming part on the build—but it’s hooked up to a salvaged tacho drive.

The 250 doesn’t have its original motor either. “I traded the first motor for Desmo parts,” says Mike. “The new motor is a bit of a mystery. I bought it from a friend of the shop—he believes it was built by an old desert racer from the 70s.” 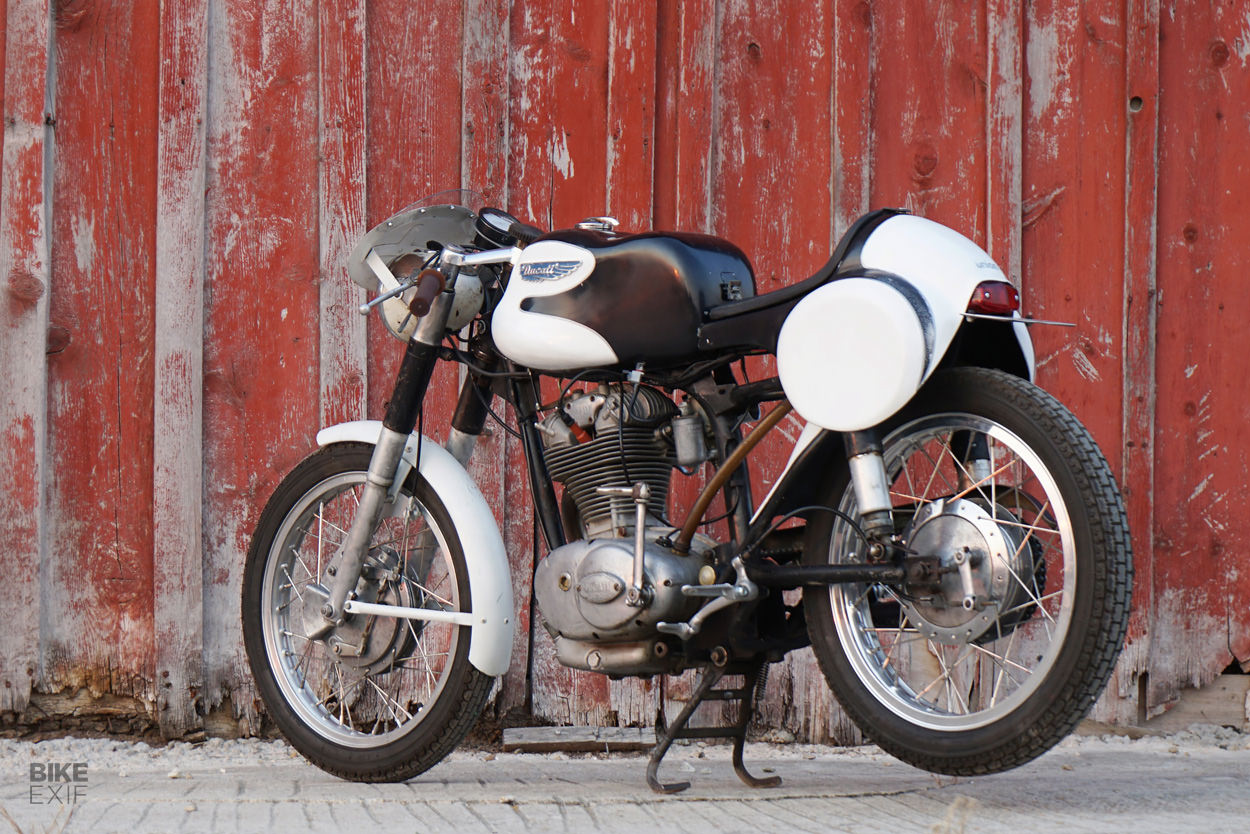 “Clearly somebody hot-rodded the heck out of the thing. It has a dual plug head and, judging from the compression and starting difficulties, my guess is that it’s bored to 350 cc and has a performance cam. The bike is virtually impossible to start with a kickstarter. The compression release must be used in conjunction with bump starting.”

“Luke is going to rebuild it this winter and make it little more usable for the street. Bump and run is fun… just not all the time” 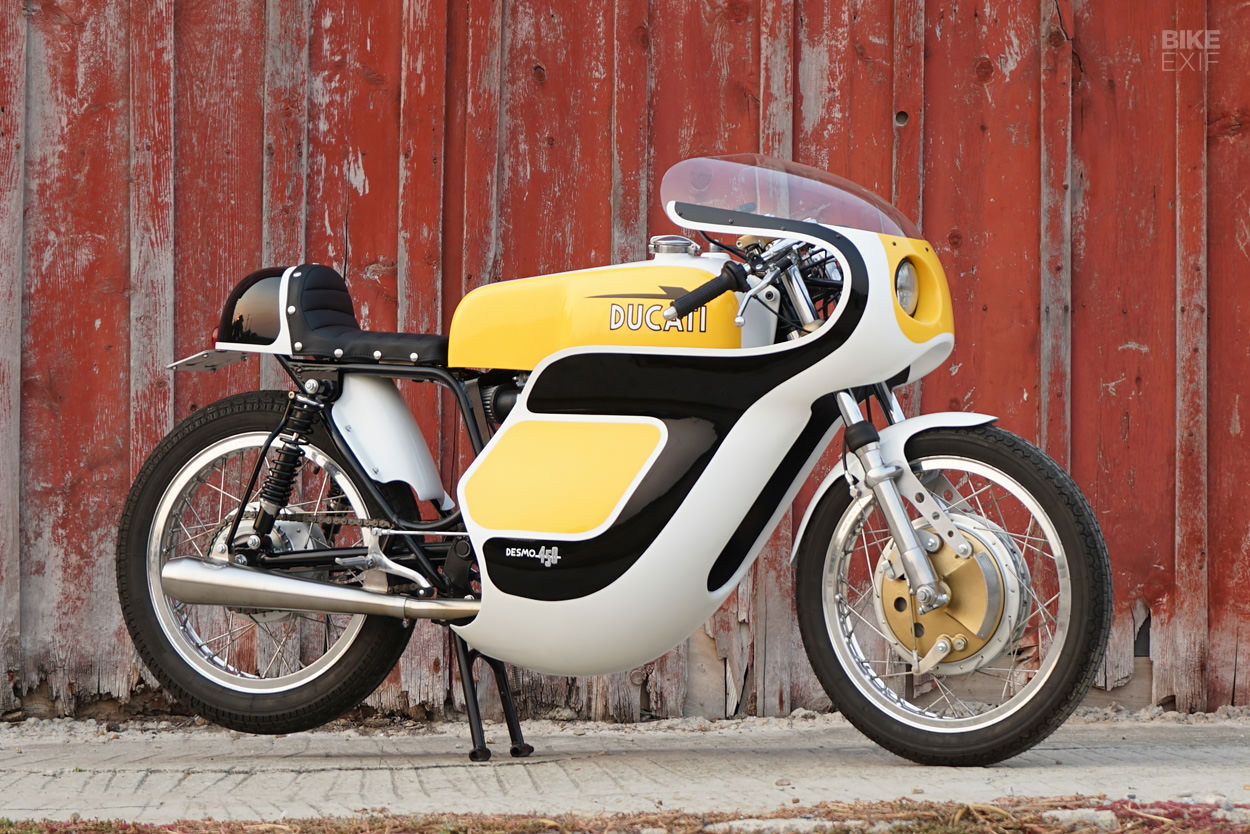 The 450 Desmo, on the other hand, is a far more polished build, and more in line with what we’re used to seeing from Union. Mike dates it as a ‘71 because of the motor—but the actual model year of the frame is unknown.

“I traded a box of junky 250 parts for the frame in 2006,” he tells us. “I had a 450 non-Desmo that I sold in the late 90s and immediately missed it. So I started the process of gathering parts for this one at that time.” 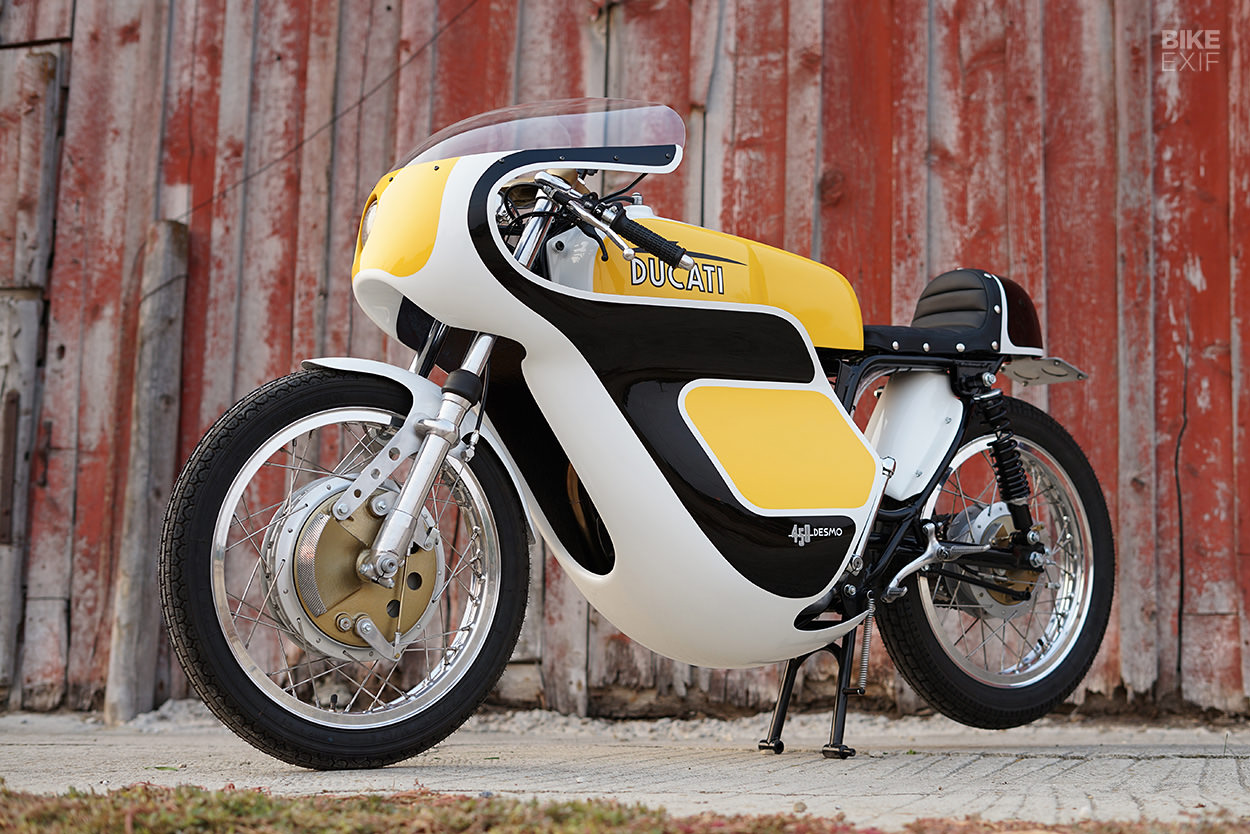 “I kind of wanted to build a no-compromise street legal race bike. It’s probably overkill for the street, but having said that, you can’t have too much braking power in modern traffic.”

Mike got the motor in a trade too, by painting a set of signs for a British bike shop in Boise some 20 years ago. Luke rebuilt the motor and a custom wiring harness with an electronic ignition, as per Union’s standard operating procedure. He also had to work some magic to get the Dell’Orto PHF carb to work well. 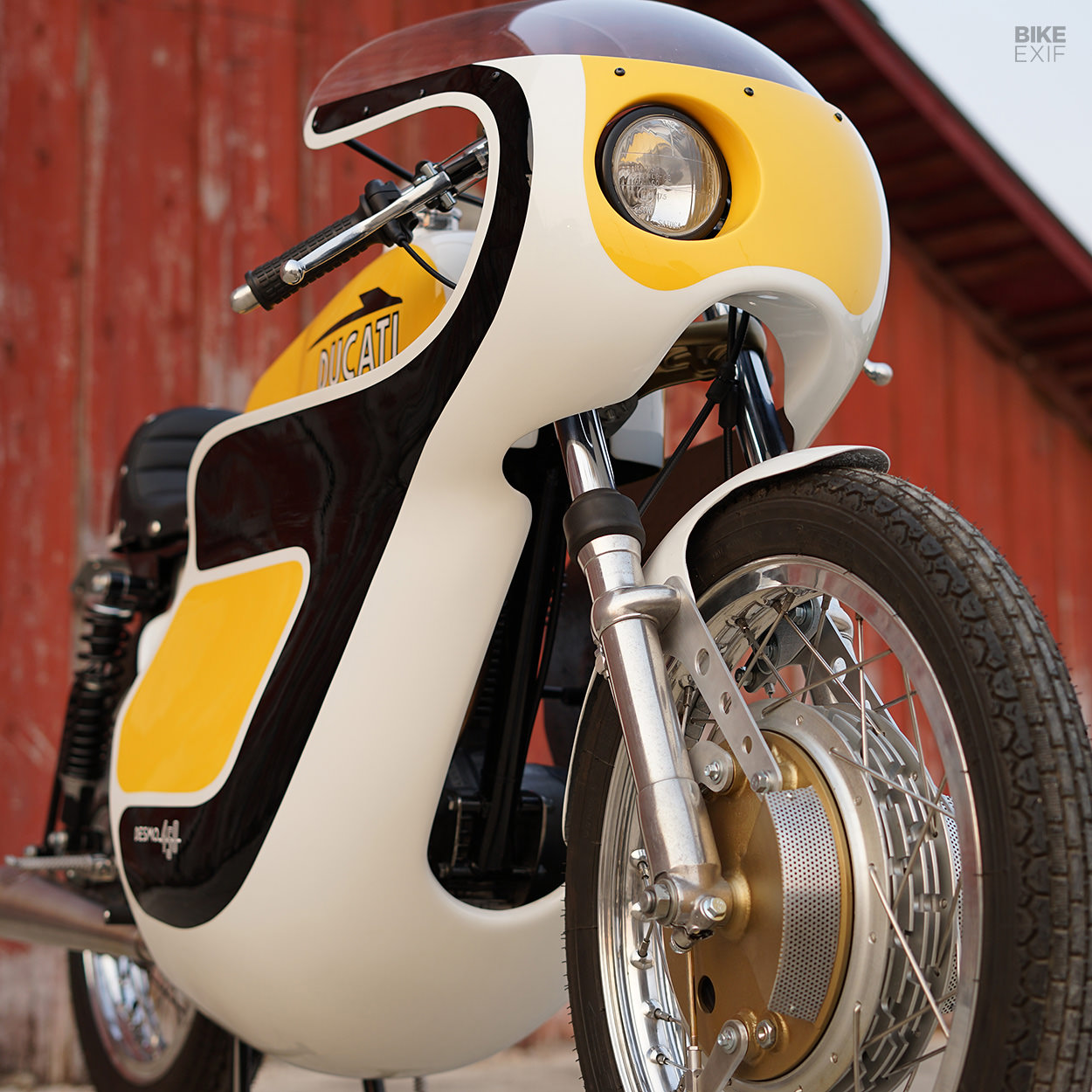 Mike also designed the fairing, tank and tail himself, then sent plugs to Glass From The Past to make the final fiberglass pieces.

“I designed the paint scheme first, and built the fairing to match it,” he says. “The upper part of the fairing is based on a Vic Camp Ducati part, and the tank and seat mimic Ducati factory parts, with different proportions to make it all work together.”

The paint was a team effort: Mike prepped the parts, Luke laid down the base, Mike did the stripes, and Luke clear-coated it. 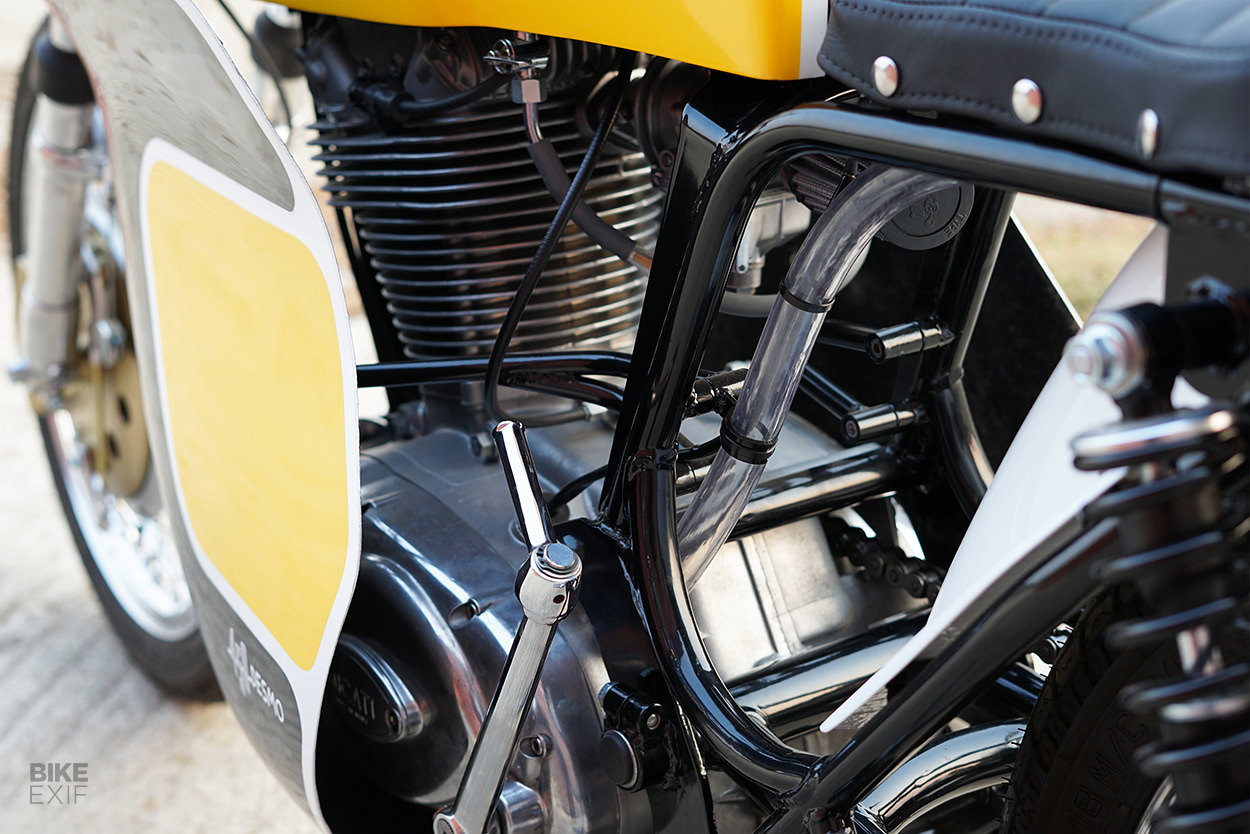 Lurking underneath the exquisite bodywork is a plethora of custom touches. Mike tweaked the frame in places, and fabricated all the fairing mounts, the instrument and headlight brackets, the steering stops, and a new center stand. He also built the exhaust system, a custom intake manifold, and a crankcase breather tank.

Finishing touches include Magura clip-ons and levers, and a Scitsu tachometer. The rear-sets and fenders are Union parts. 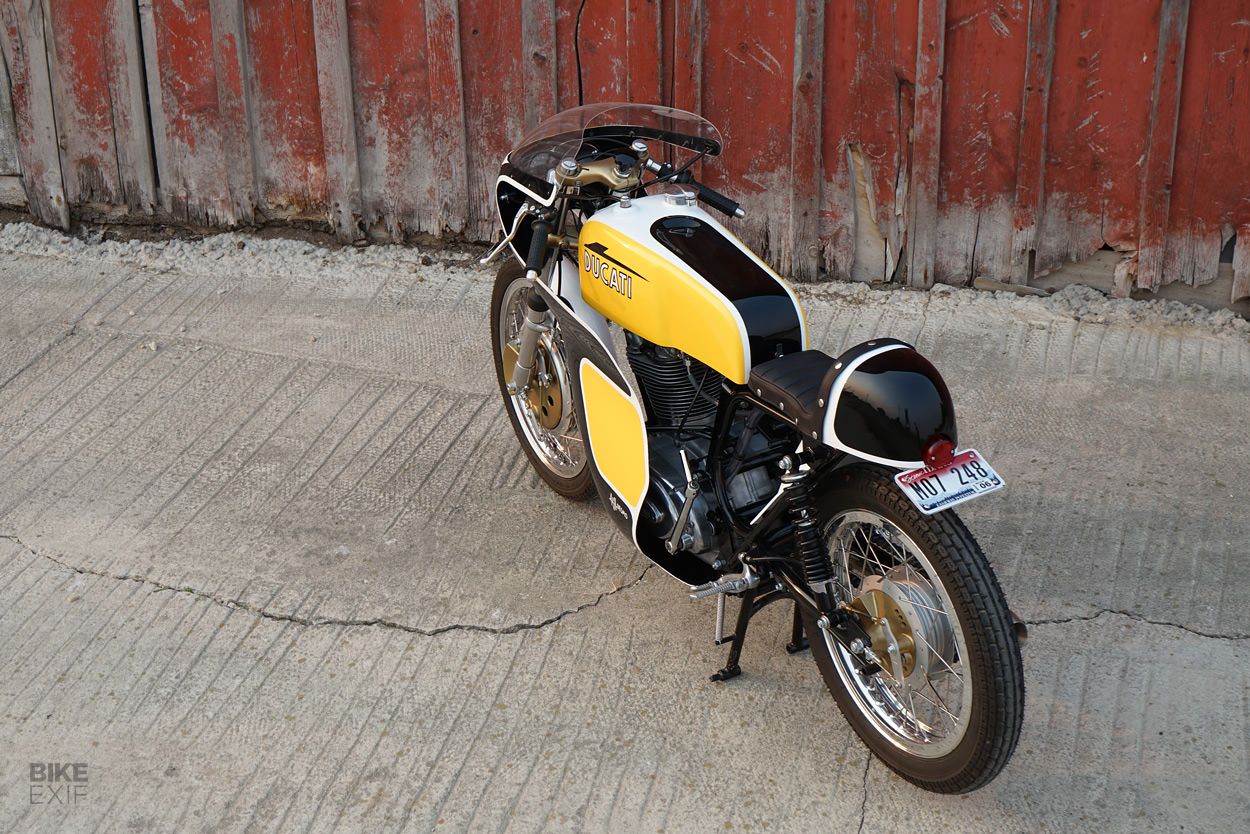 Although they’re two very different builds, both Ducatis bear witness to just how well Mike and Luke have mastered their craft. Mike’s planning to ride the Desmo on their upcoming tour, but will probably loan the 250 out. Time to visit Idaho? 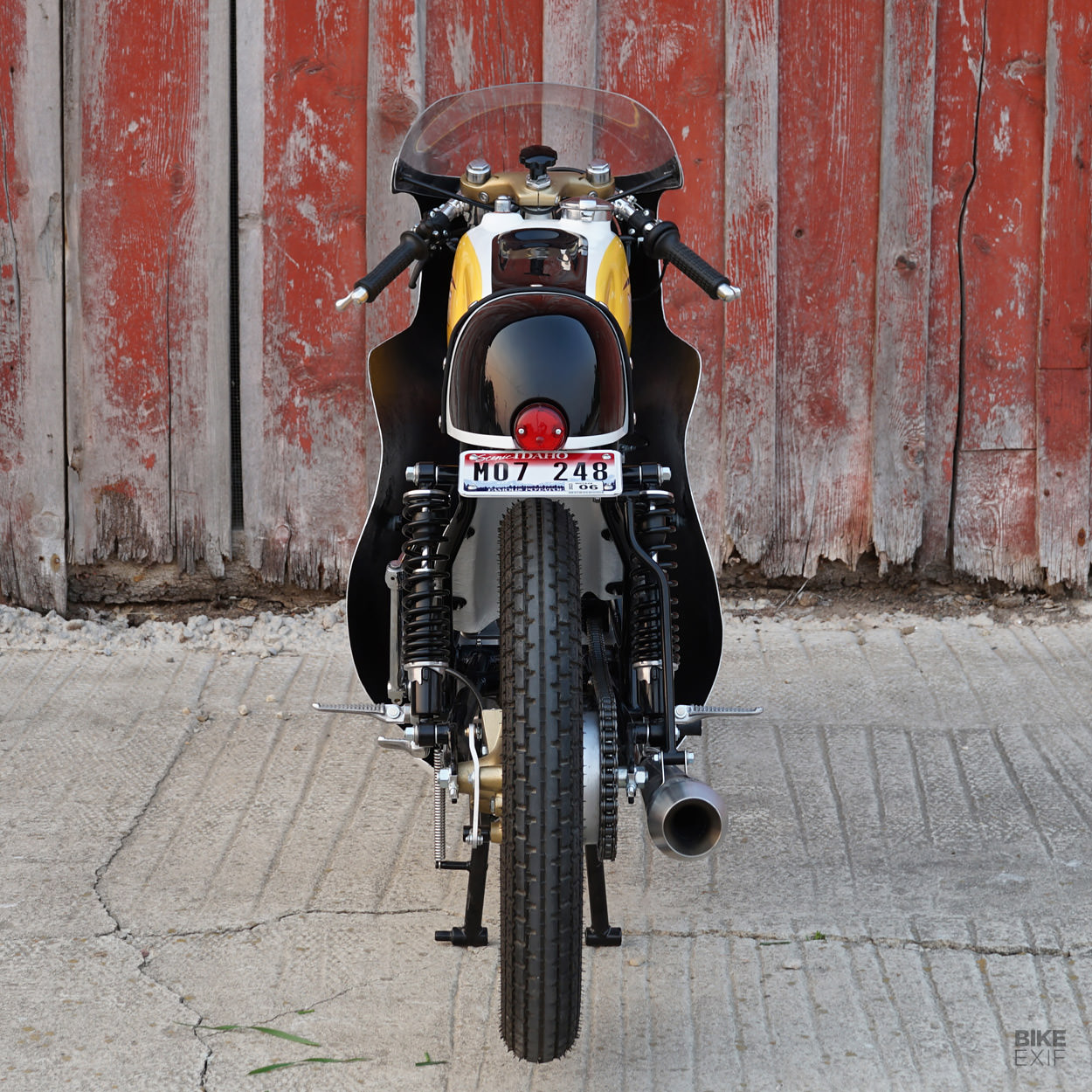