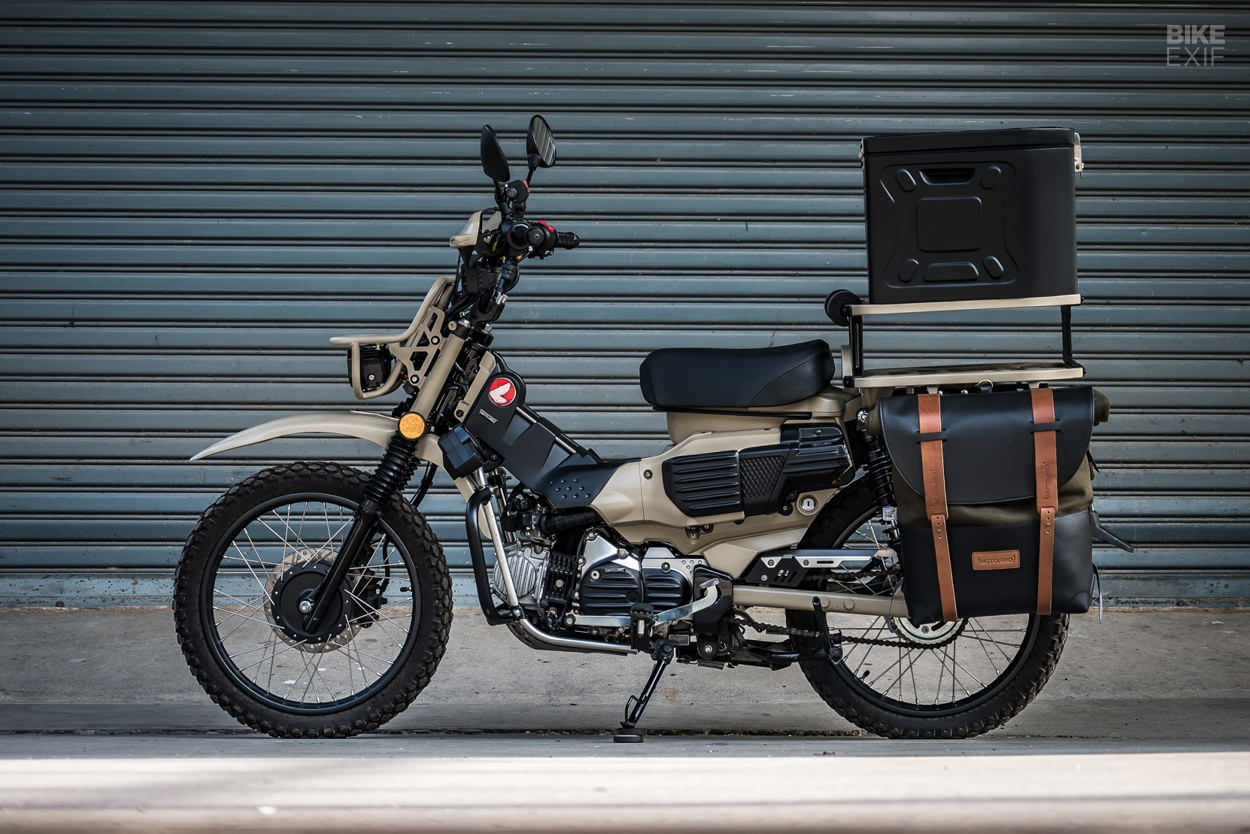 There’s something irresistible about tiny motorcycles. According to scientists, we’re drawn to objects that are smaller than usual because they pose less danger, they remind us of toys, and they give us a feeling of control.

That would explain the cultural appeal of mini marvels like Japanese Kei trucks, and the Honda Grom. And classics like the Piaggio Ape three-wheeler, originally adapted from the Vespa scooter. Plus the Super Cub, the Australian CT110 ‘Postie Bike’ … and this Honda CT125 from Motolord in Thailand. 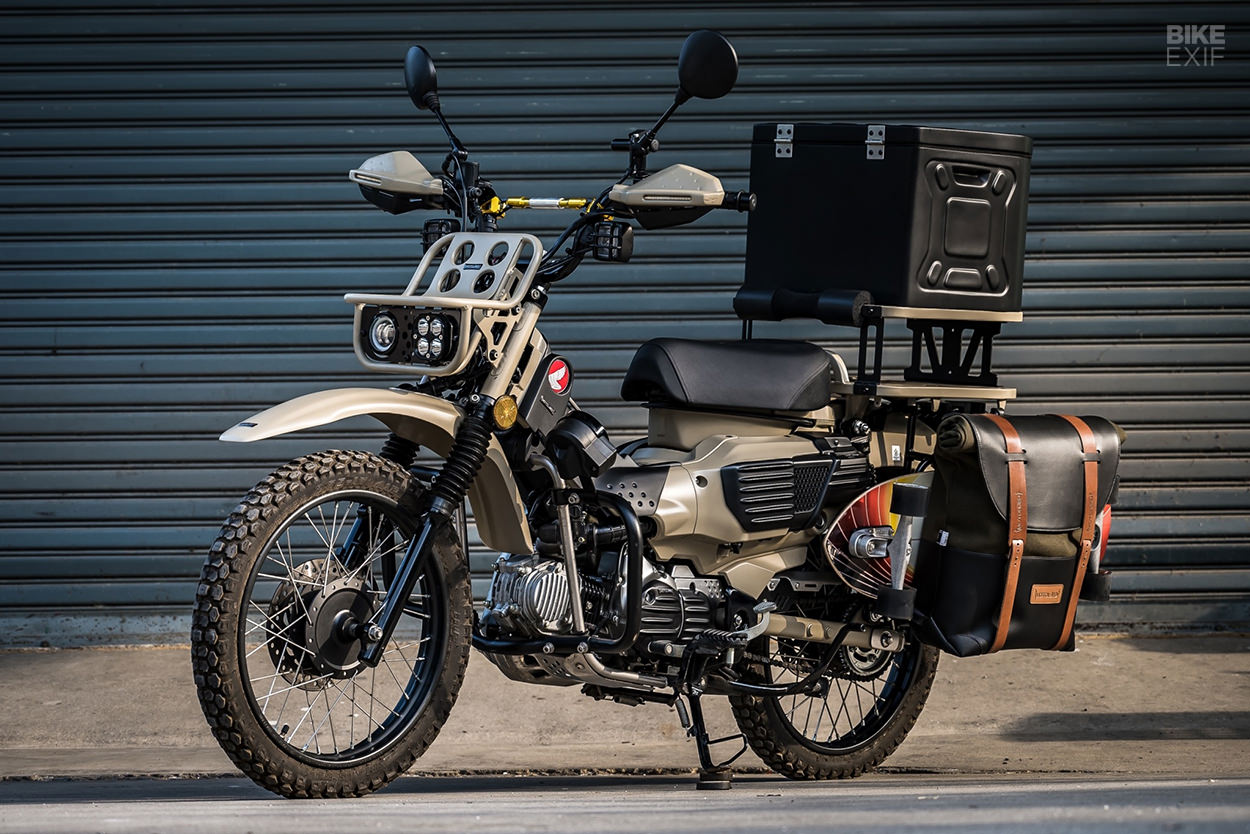 Motolord is run by Chayakrit ‘Win’ Kaewwongwan, who designs and fabricates aftermarket parts for popular local models such as the Honda Rebel. He also occasionally customizes bikes, and this CT125 ‘MadMax’ is his latest project.

“The design concept was to customize parts while keeping the original structure,” he tells us. “We replaced components without harming the frame, so the bike can go back to its original state at any time.” 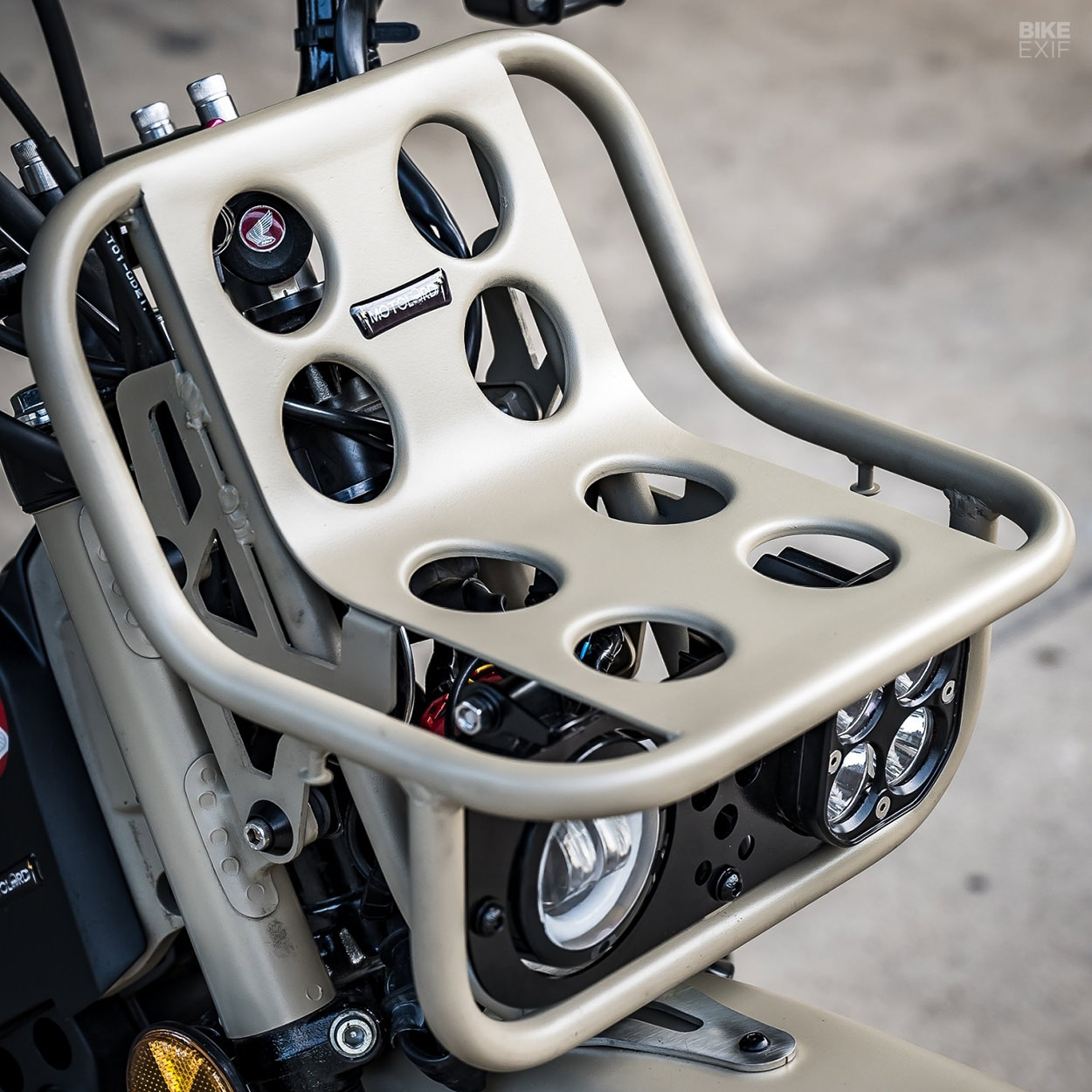 It’s a clever transformation that made us smile the instant we first saw it. Honda calls the color ‘Matte Fresco Brown’ and that’s what got Chayakrit thinking.

“When I saw the new CT125 for the first time in this desert color, it reminded me of the movie Mad Max,” he says. “I like the style of those vehicles, and used some of them as inspiration.” 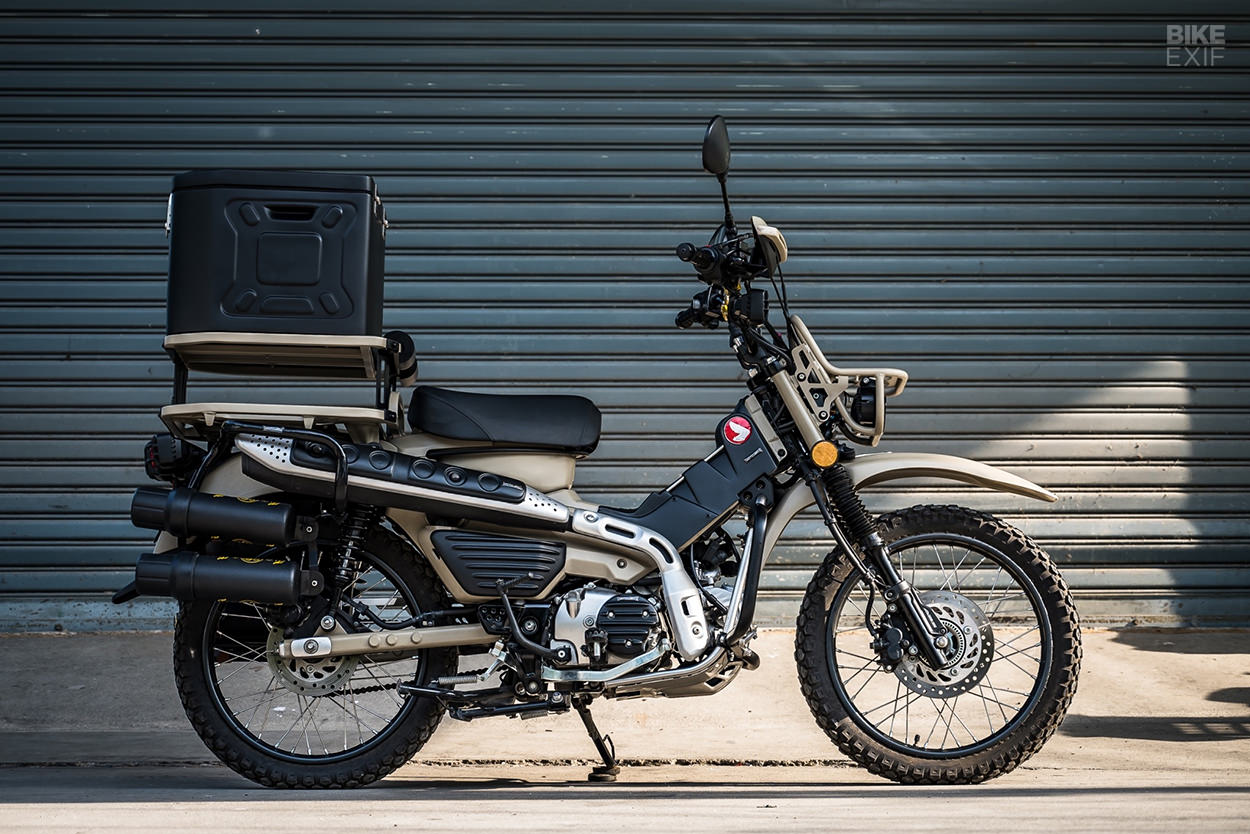 The CT125 would be at home in the Australian outback: like its CT110 predecessor, it’s a simple but capable workhorse. It’s related to the iconic Super Cub and the specs are basic, with a 125cc single-cylinder engine and a four-speed semi-automatic ‘box. But you also get modern fripperies like electric start, ABS, LED lighting and digital instumentation.

Chayakrit has added dual LED headlights mounted in a robust bracket that’s effectively a bolt-on replacement part for the stock single bowl. The bracket assembly is big enough to do double duty as a small rack, and it’s flanked by daytime running lights mounted to custom bars. 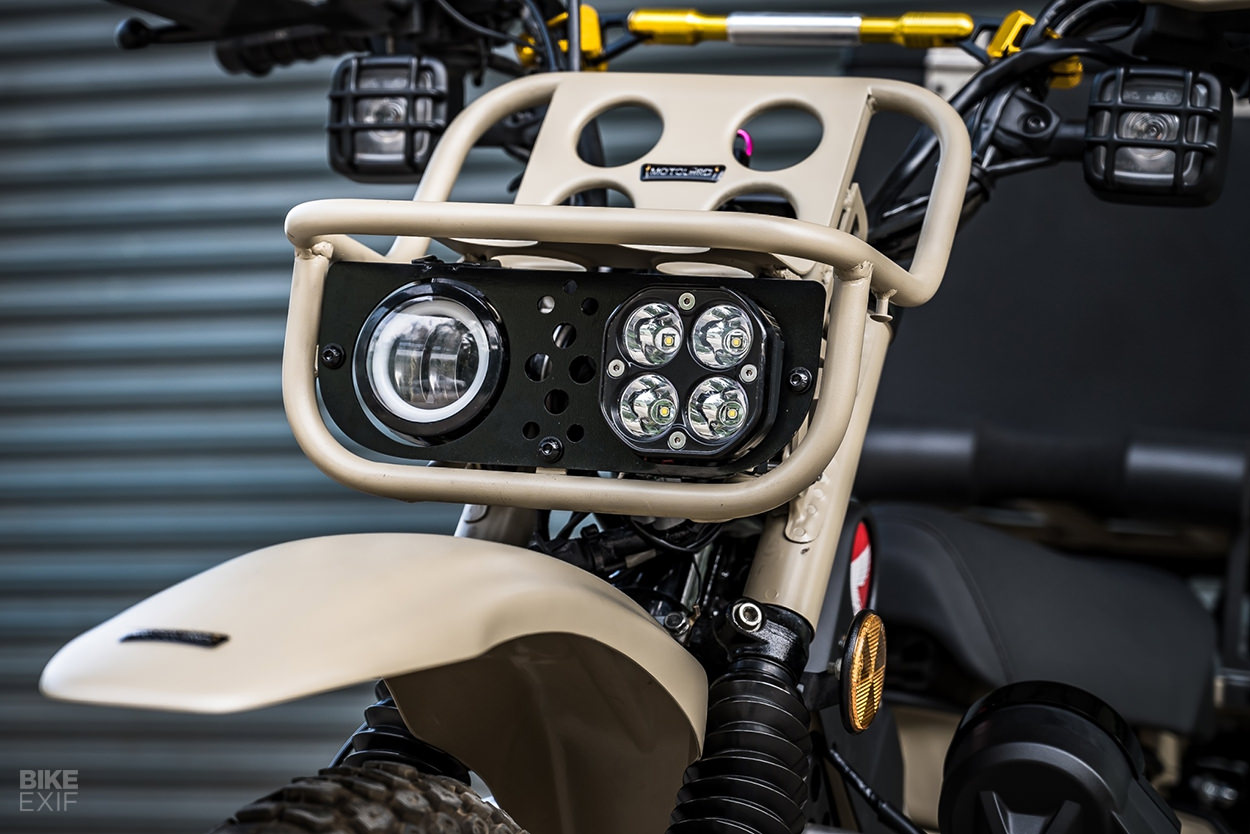 The tough look is mostly cosmetic at the front, but there are now crash bars to provide more practical protection. The engine gets ribbed covers, and there’s a stylish custom air filter cover right under the seat, giving the CT a bit of a ‘tactical’ vibe.

The central spine of the underbone frame gets a matching cover too, which acts as a mounting point for luggage.

Luggage is the focus here, so there’s a huge custom rack at the back, which can also act as a mounting point for a box, and there’s a side rack on the left for a soft bag.

It may seem like overloading, but the CT125 is a pretty sturdy for such a compact machine: it weighs just under 260 pounds wet in the showroom, but has a 522-pound GVWR. 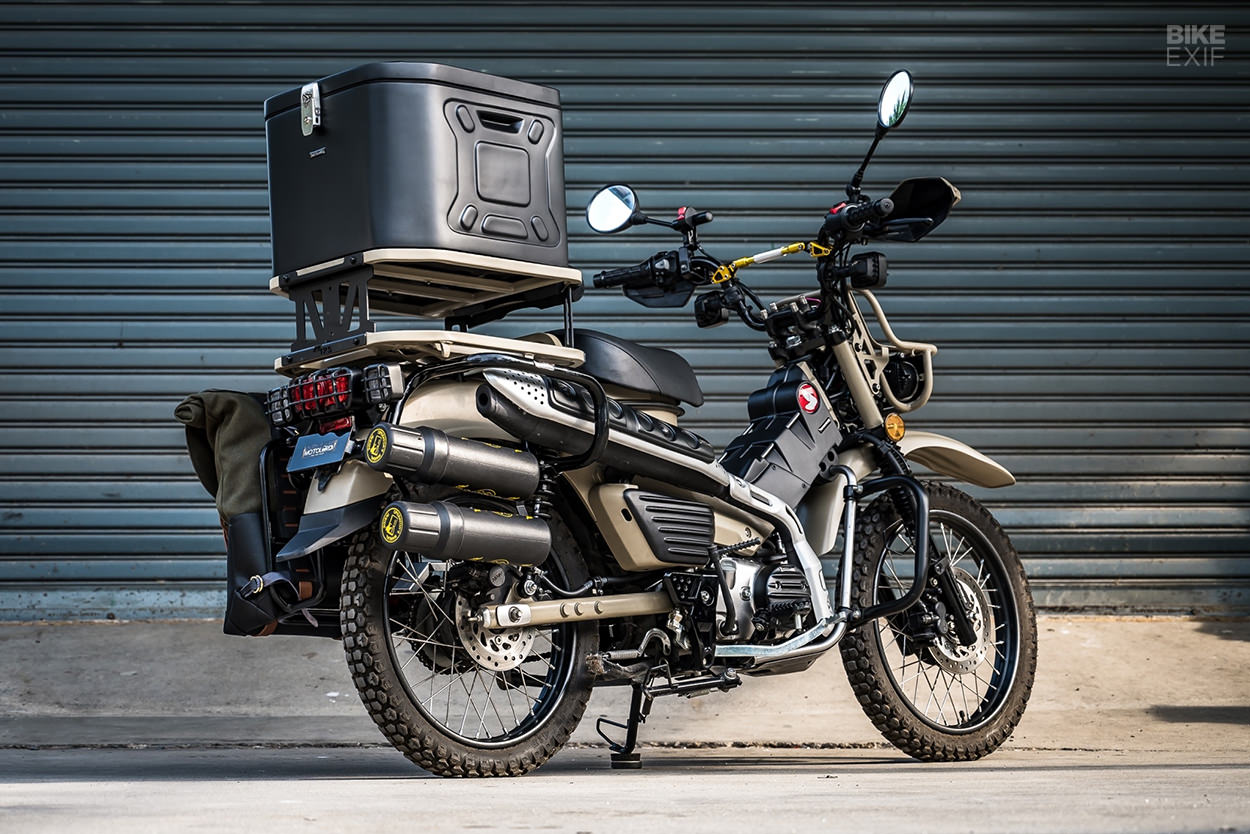 If the rider has stayed off the cheeseburgers, that leaves enough spare capacity for a decent camping trip. And just to be sure, Chayakrit has upgraded the rear shock to a ‘Diablo’ unit from K-Speed.

‘MadMax’ isn’t going to win any drag races, but it’s unlikely to leave you stranded in the middle of nowhere, either. Or break your leg if you fall off it. It’s small but mighty, with go-anywhere capabilities that would shame many conventional ADV bikes. 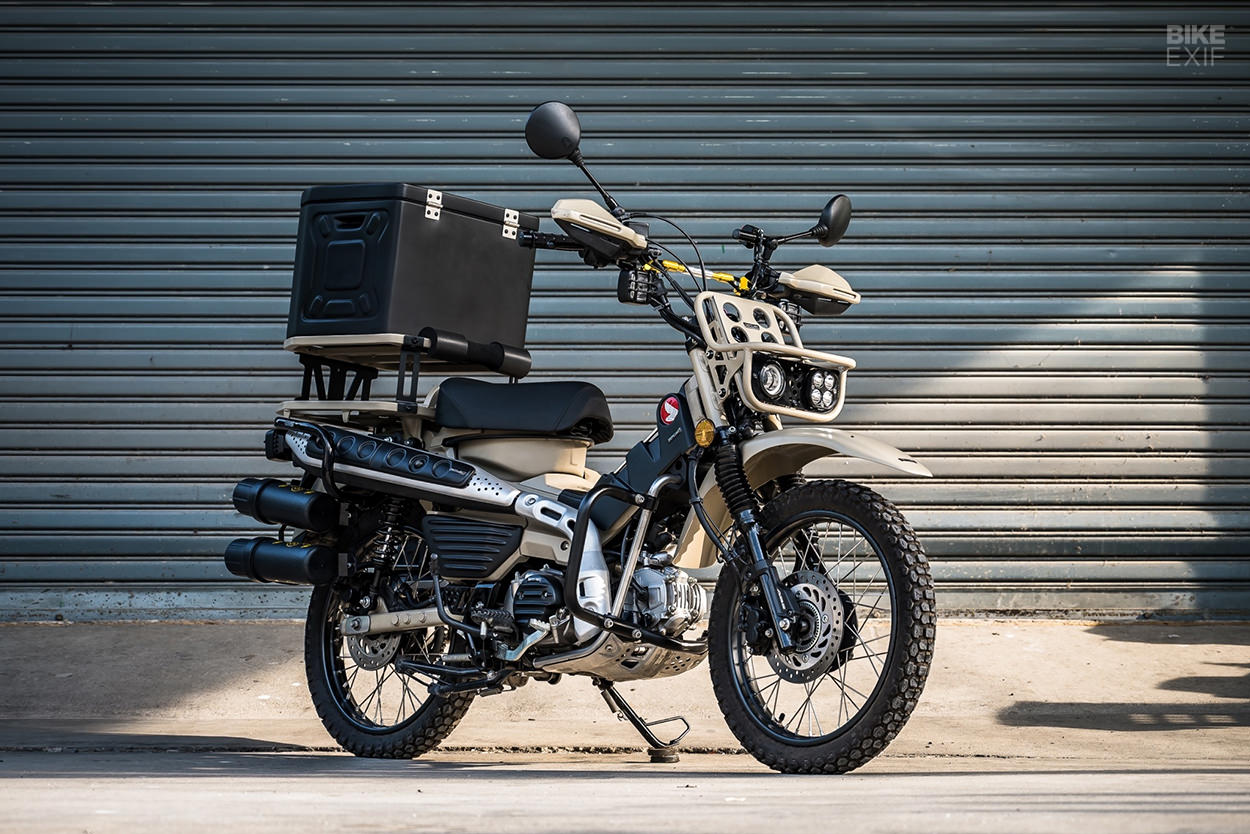 If you’re inspired by Chayakrit’s approach and live in the US, grab yourself a Honda Trail 125 and get creative. It’ll cost just $3,900 to ride one off the showroom floor, so you might have a little left in the bank for a light custom job …