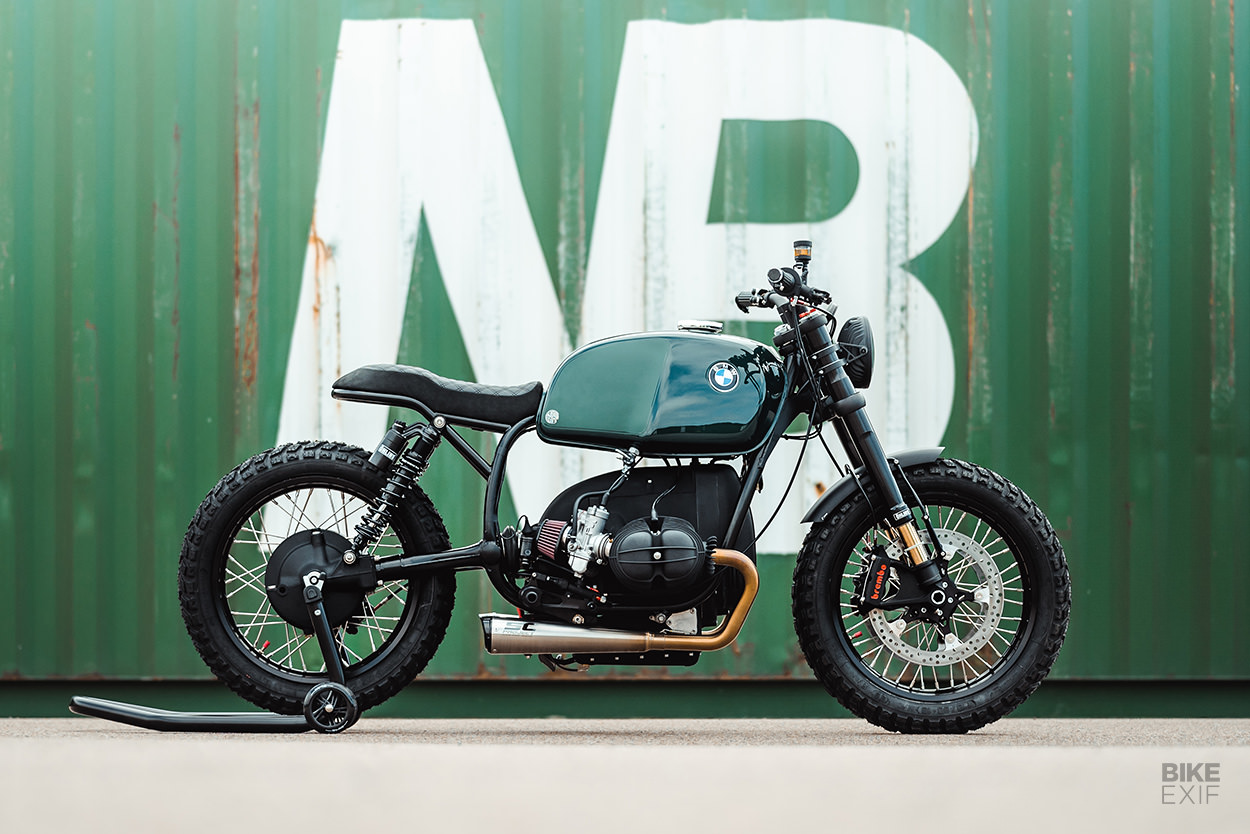 Classic BMW boxers are so prolific as custom donors, that most builds these days are very formulaic. But there are dozens of swing-and-miss examples out there, that prove that it still takes a sharp eye and a measure of good taste to get them right. 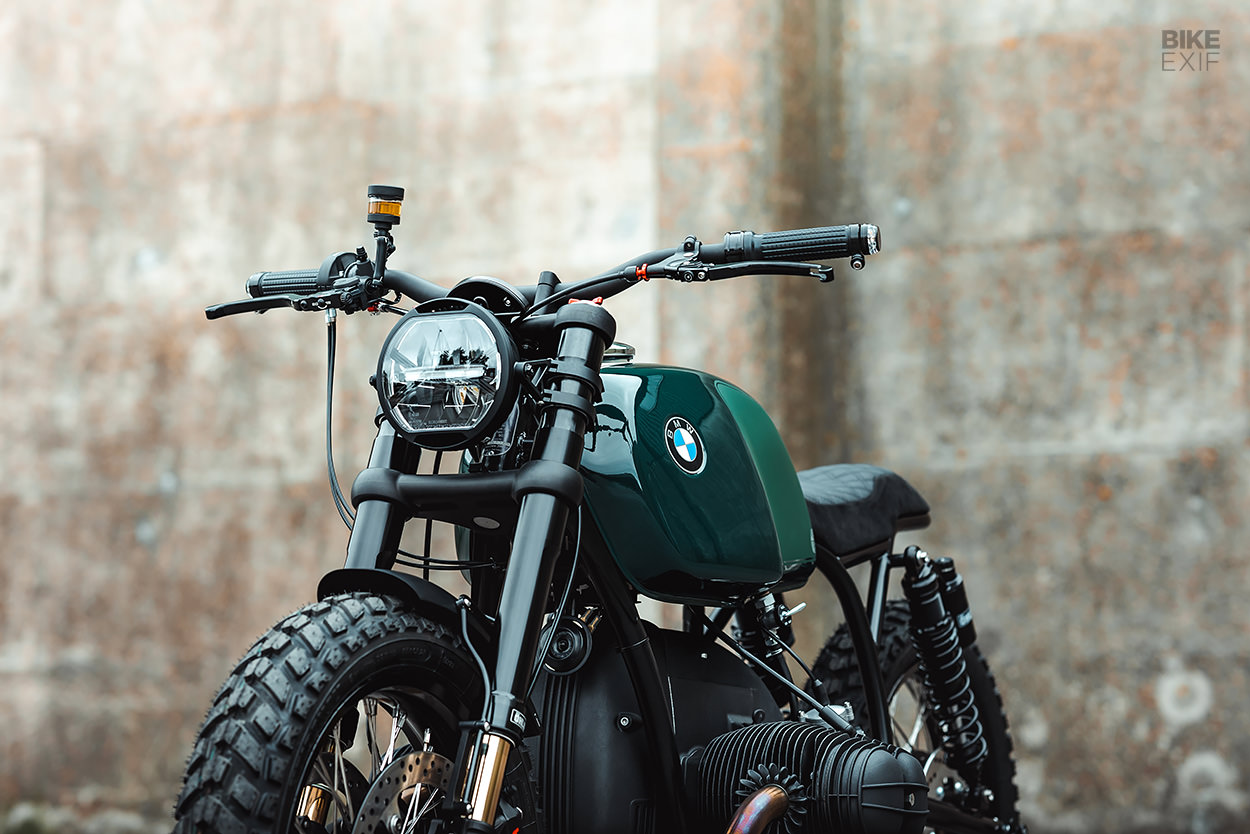 Injustice’s Anton Knutsson runs the shop as a one man army, and has a penchant for building bikes that are crisp and minimalist. This BMW came from a customer in Norway, who’d been riding it in stock form for years, but had dreamt about owning a custom bike. And it wasn’t too beat up either, despite its age.

“After discussing this build with the owner, we agreed on aiming for something like what Singer does with old Porsche 911s,” Anton tells us. “We wanted to keep much of the traditional lines that are iconic on the Airhead, but add a lot of modern technology and performance.” 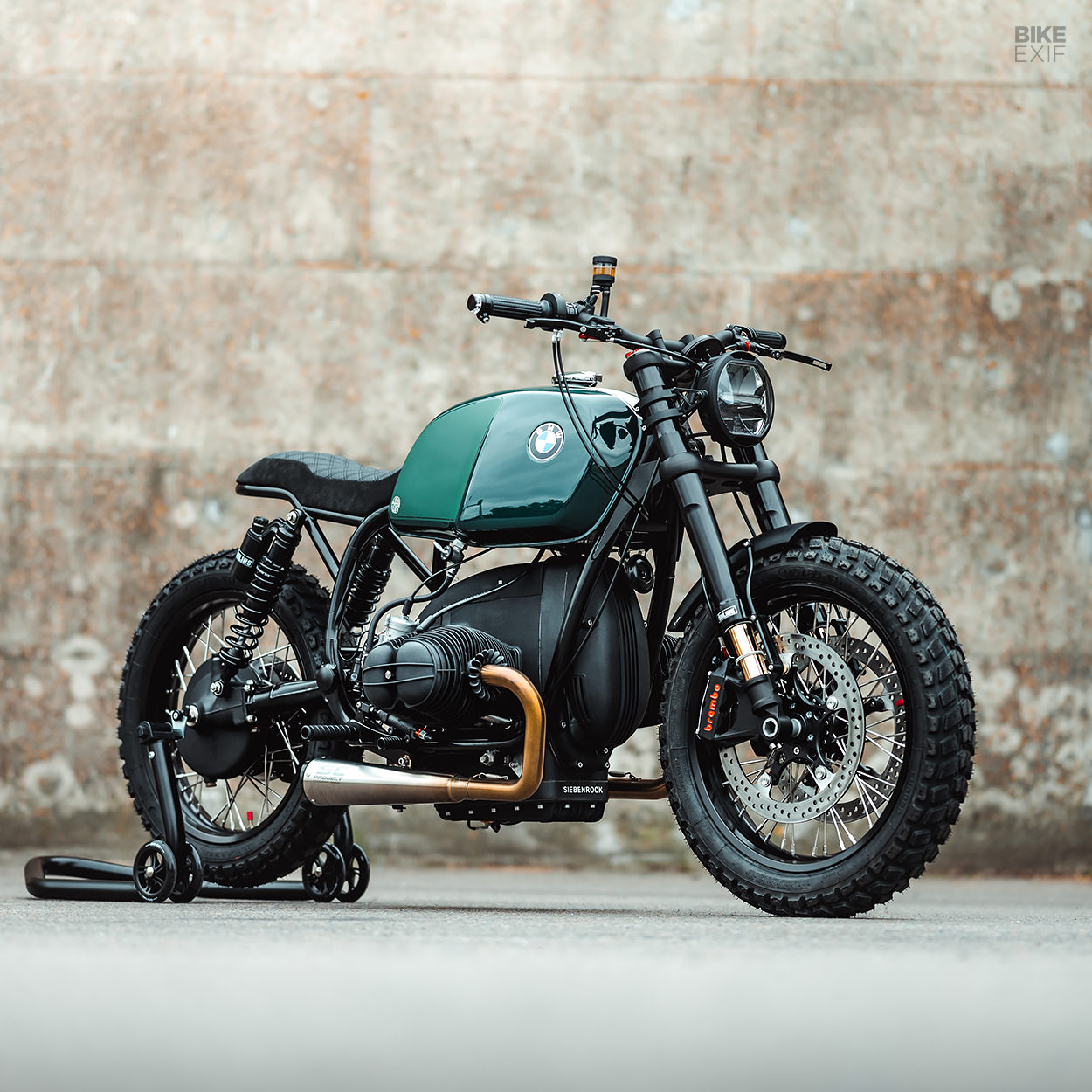 With the R90 well-maintained and the motor in pretty good shape, there was no need for a full rebuild. But Anton worked through it anyway, and replaced anything that wasn’t absolutely tip-top. The updates included a Silent Hektik ignition, and a handful of parts from the BMW experts Siebenrock, including an extended sump for long-distance riding.

He then installed a pair of personalized DNA filters on the Dell’Orto PHM carbs, and a new cover where the airbox used to be. The exhaust headers are custom stainless steel units, but the end cans are really special; they’re SC Project parts, identical to the ones on the limited edition 2019 MV Agusta F4 Claudio. Anton procured them via a top secret contact. 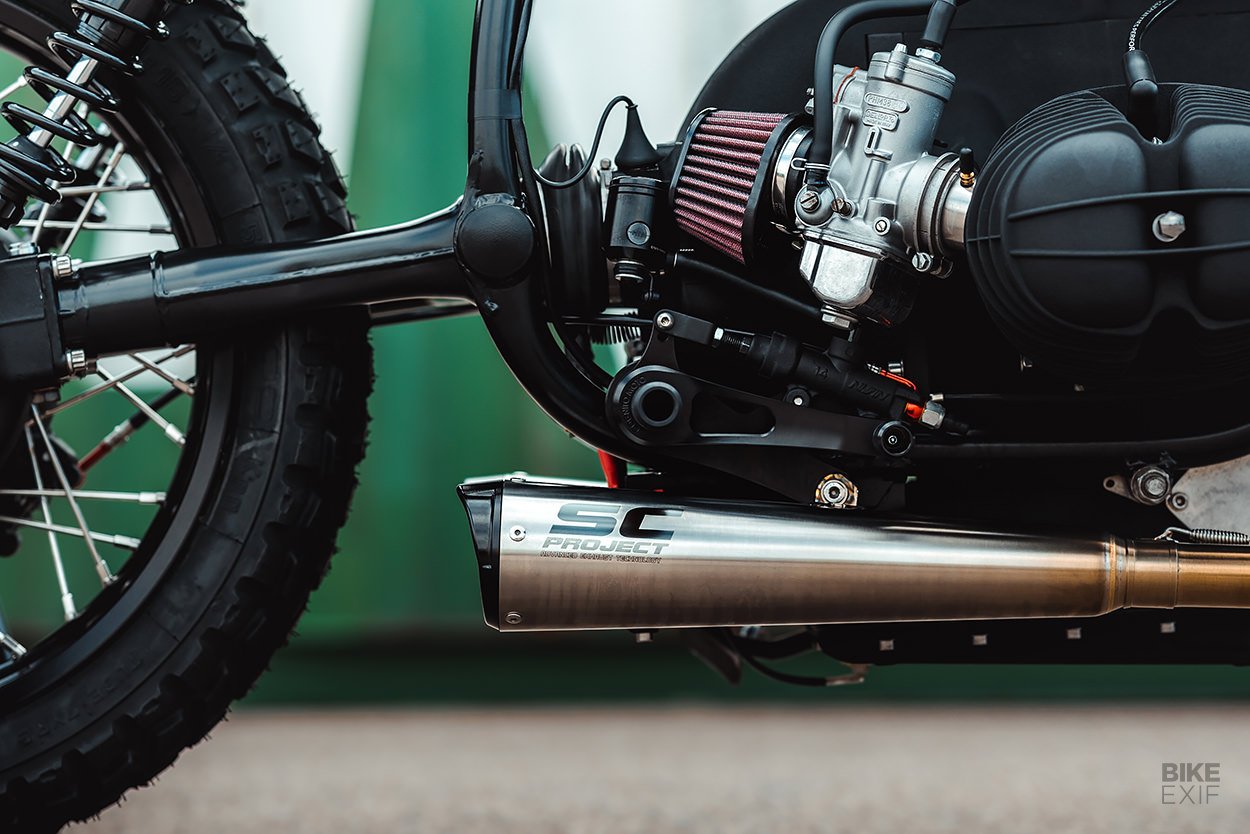 “The mufflers on this bike are the exact same ones, modified to fit this 47-year-old airhead,” he says. “The F4 Claudio was just produced in a hundred units, which means there are just 101 pairs of these on the planet.”

The electrical system was also overhauled, with a Motogadget mo.unit blue controller, a custom wiring harness and a Lithium-ion battery. 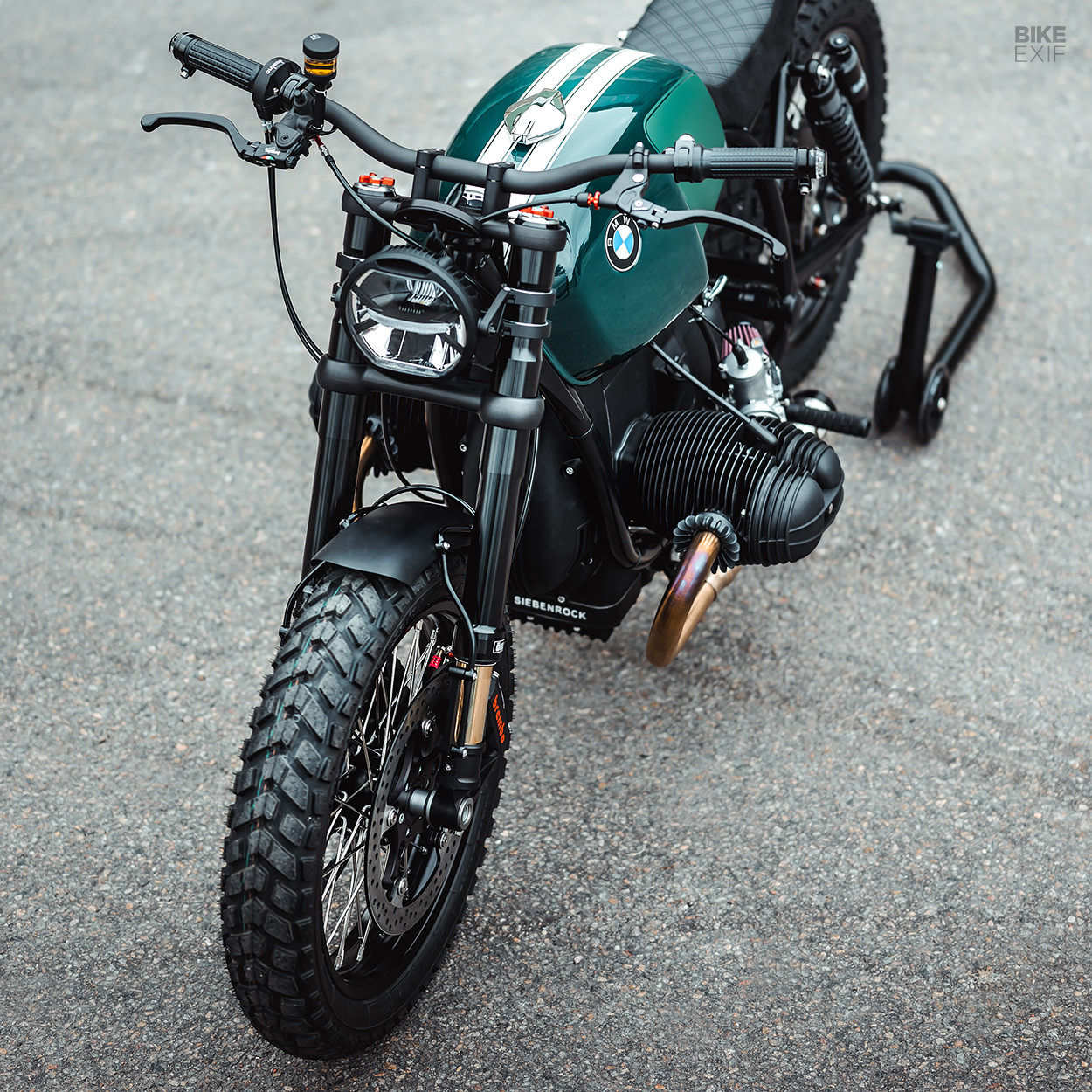 Anton turned his attention to the BMW’s running gear too. “The owner lives in Oslo,” he tells us, “so he’s only about an hour away from the most breathtaking motorcycle roads on the planet. With this in mind, it was important that the bike didn’t just look nice, it also handled well.”

The BMW now rides on brand new Öhlins suspension, with a set of FGRT forks up front, and STX46 shocks out back. The forks are actually designed for the BMW R nineT and came with a set of triple clamps—but Anton adapted them to fit the classic boxer. 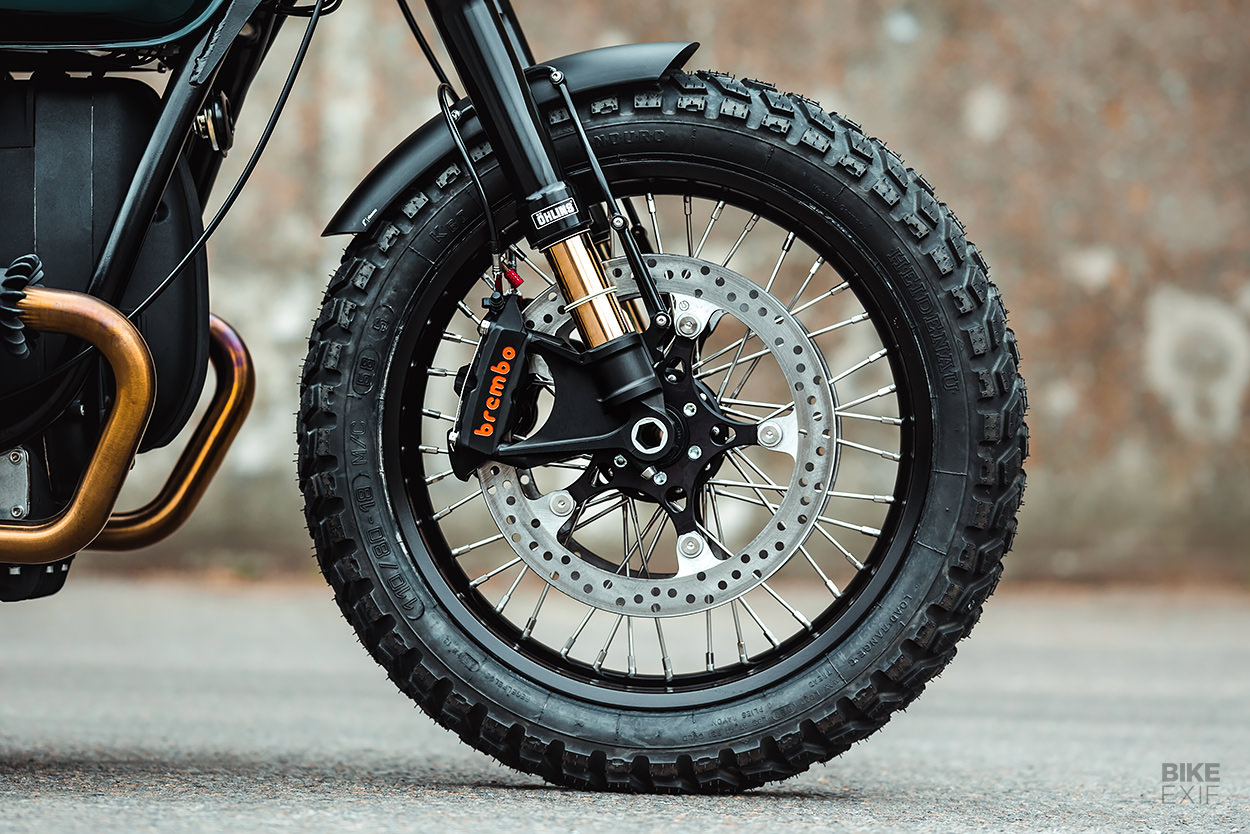 For the wheels, he laced up a pair of 18” Sun rims to Cognito Moto hubs, with stainless steel spokes and Heidenau K60 treads. The front brake setup is an off-the-shelf Brembo arrangement, with twin Brembo M4 monoblock calipers and 320 mm discs. The rear wheel was upgraded from a drum to a disc brake, with a Brembo caliper and master cylinder borrowed from a Honda CBR1000RR. 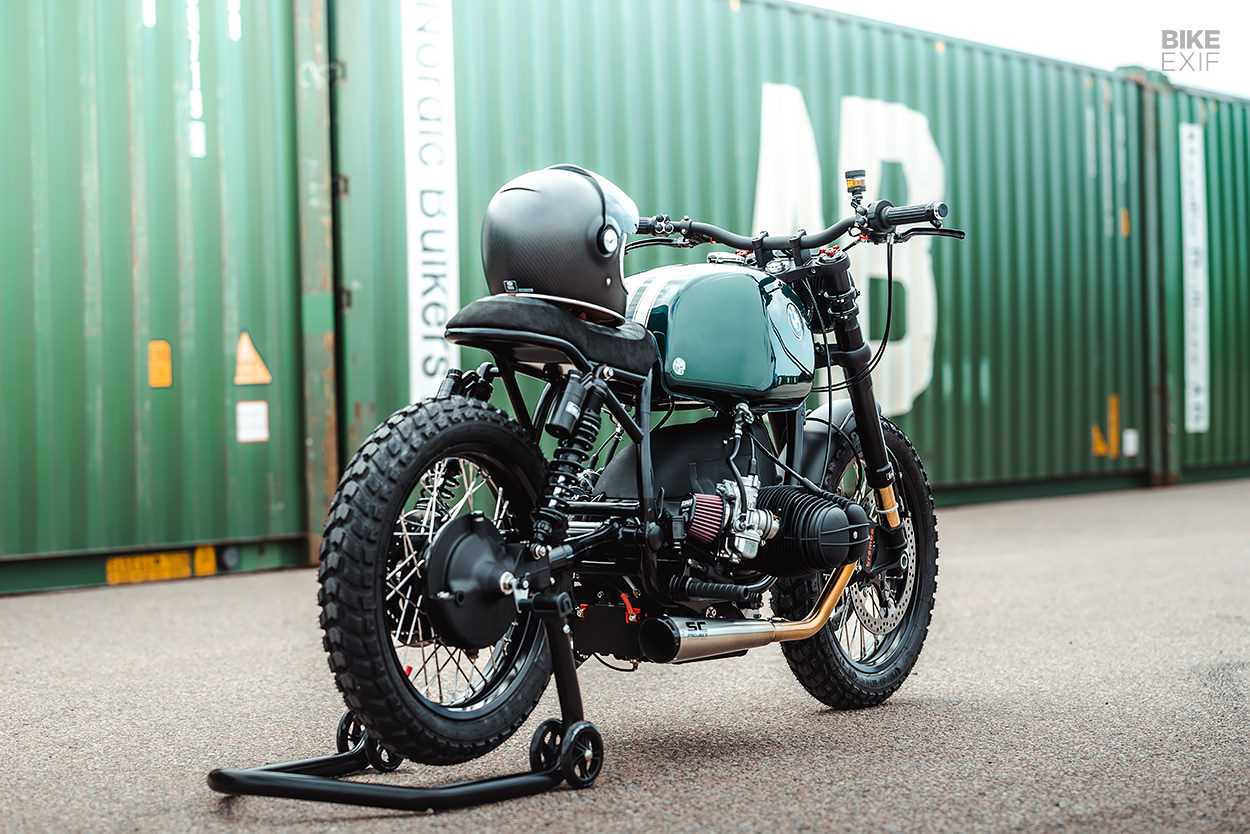 Up top, Anton kept the OEM BMW fuel tank to retain a measure of the bike’s original DNA, but binned the bolt-on subframe. “I don’t have any skills in fancy CAD programs,” he says, “so the subframe was designed, bent and welded in my friend’s chopper shop, here outside Gothenburg. I really love working like that—to see the shapes slowly growing in front of me.”

Anton shaped a fiber glass seat pan too, then sent it to Johnny Sadelmager in Copenhagen for foam and upholstery. The front fender’s a Rizoma part designed for the R nineT, but it only took minor tweaking and a custom bracket to make it fit the old airhead. 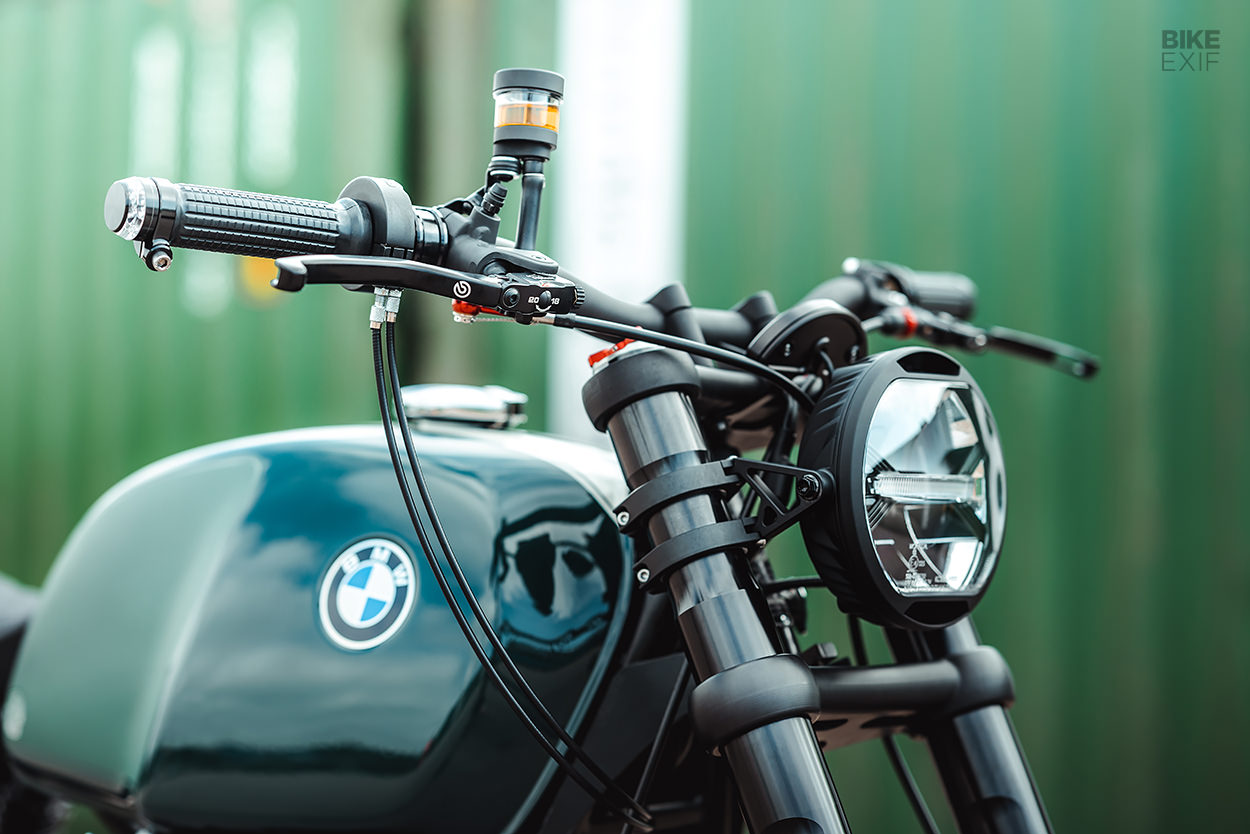 Just above it is a new LED headlight, and behind that, a pair of trimmed Renthal Twinwall handlebars with all the wiring running inside. There’s also a Domino throttle, a new clutch lever, a Brembo brake master cylinder, switches, grips, and turn signals from Motogadget, and new foot pegs round out the spec. (Not pictured is a detachable license plate bracket that also hosts the taillights.)

Image Design Custom in the UK handled the luscious green paint job on the tank, but the rest of the parts were either painted, powder coated or Cerakoted in black. Every last nut and bolt was also either refurbished or replaced, leaving no stone unturned. 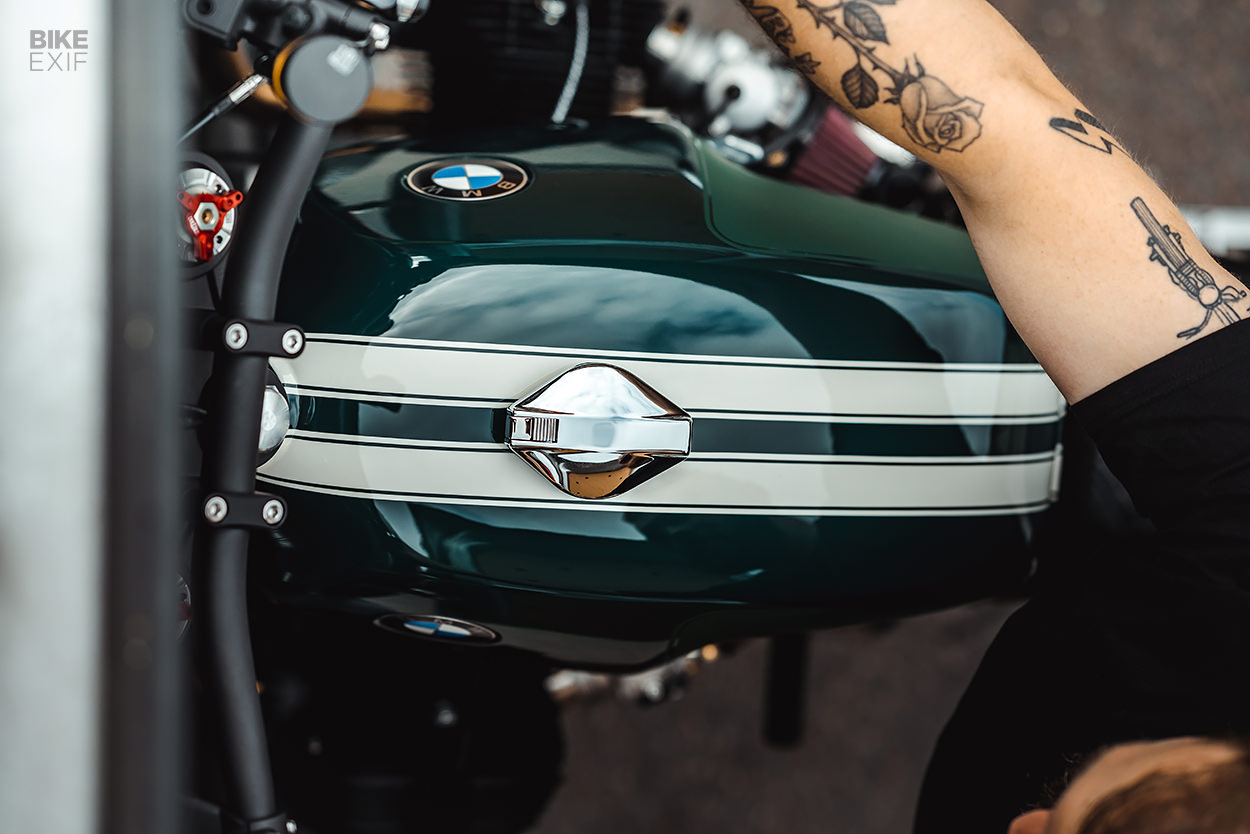 “I didn’t wanted this to just to be another repeat on the popular airhead scene,” says Anton. “It’s important for me that our following will recognize an ‘Injustice’ bike. I normally focus on newer bikes, so to transfer my style onto a nearly-50-year-old motorcycle took some thinking before I was a hundred percent satisfied.”

We’d say Anton’s accomplished his mission. This scrambler looks hella fresh for a bike that’s almost half a decade old, and we’d happily park it in our garage—when we’re not out riding it, of course. 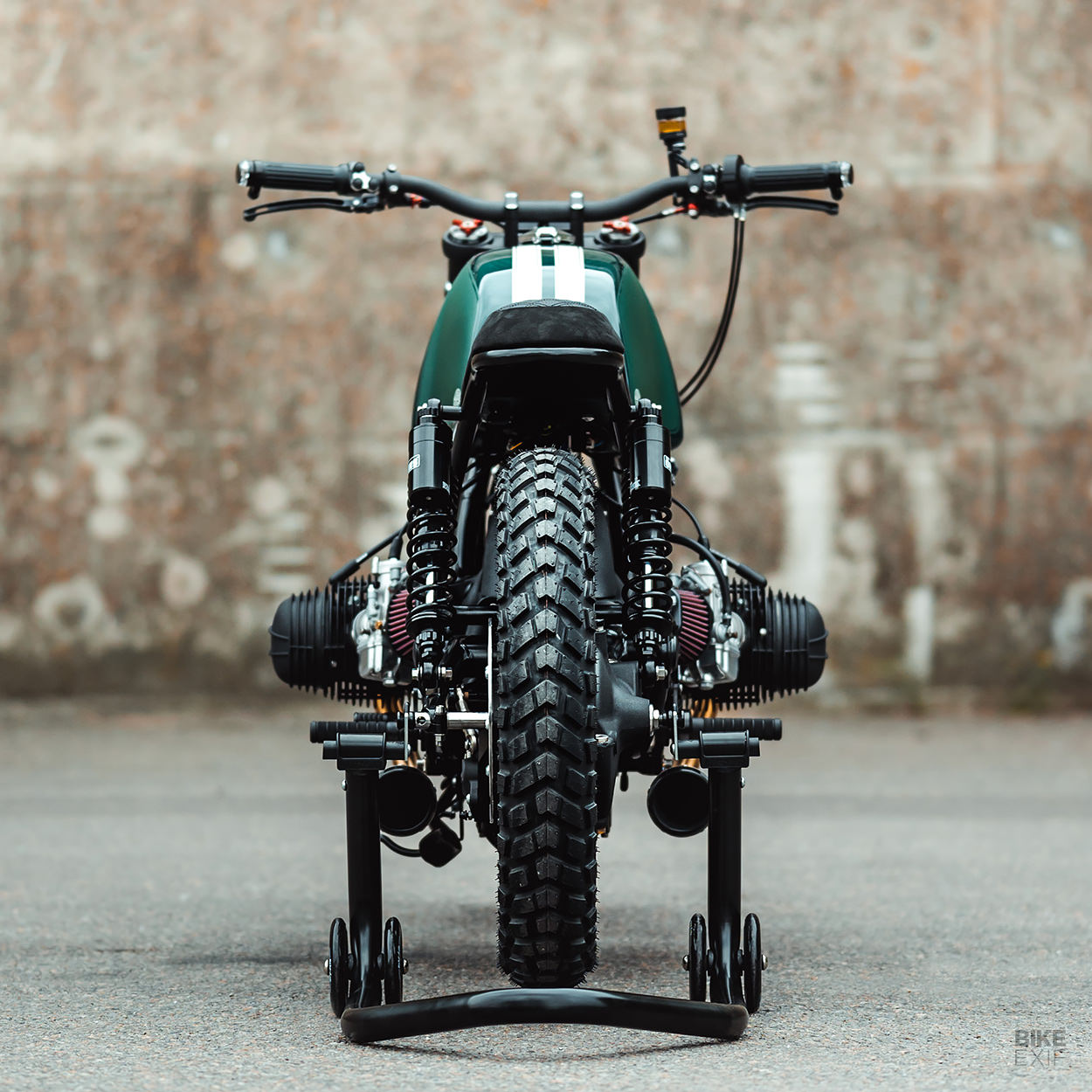