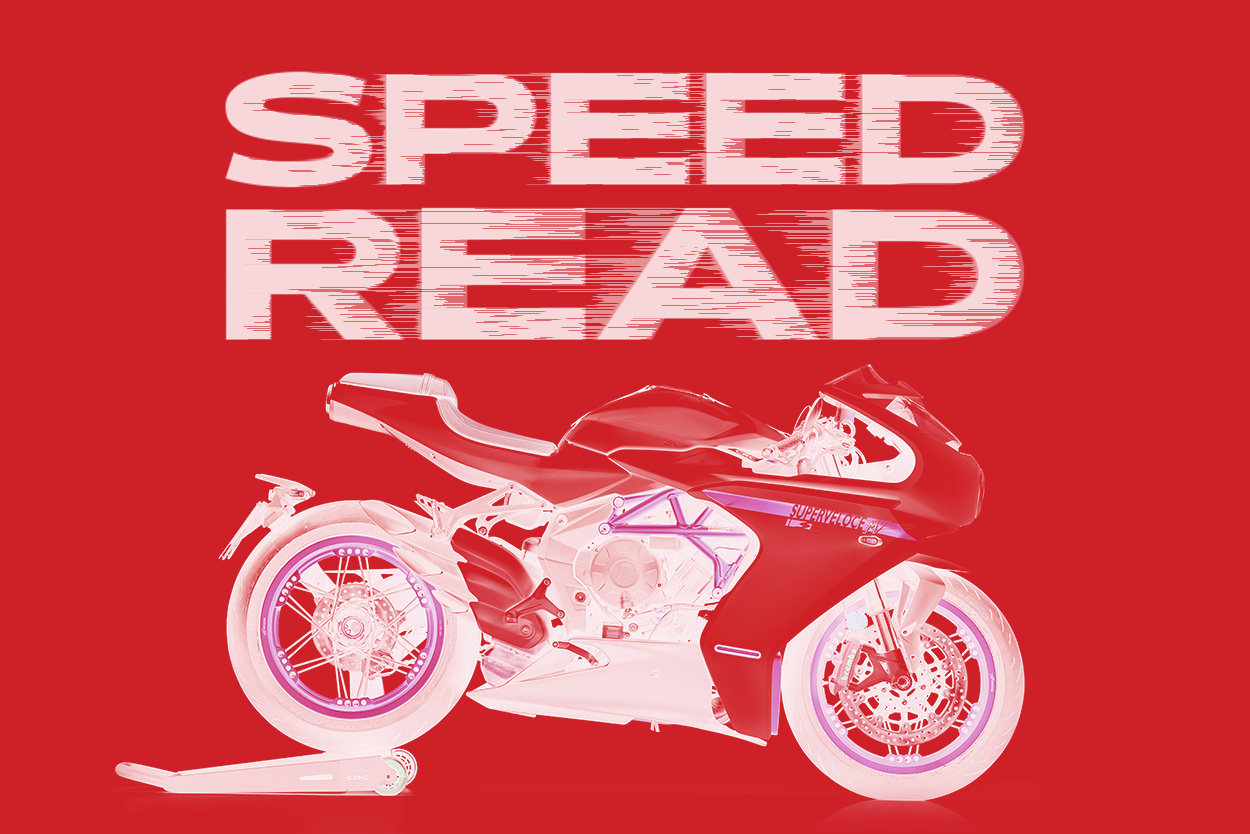 MV Agusta updates the Superveloce, while Ironwood Custom Motorcycles partners with a US-based shop. Plus we’ve got a handsome Yamaha SR400 from Vietnam, and two videos to end your weekend with: a Honda Hawk build, and an interview with Pierre Terblanche. 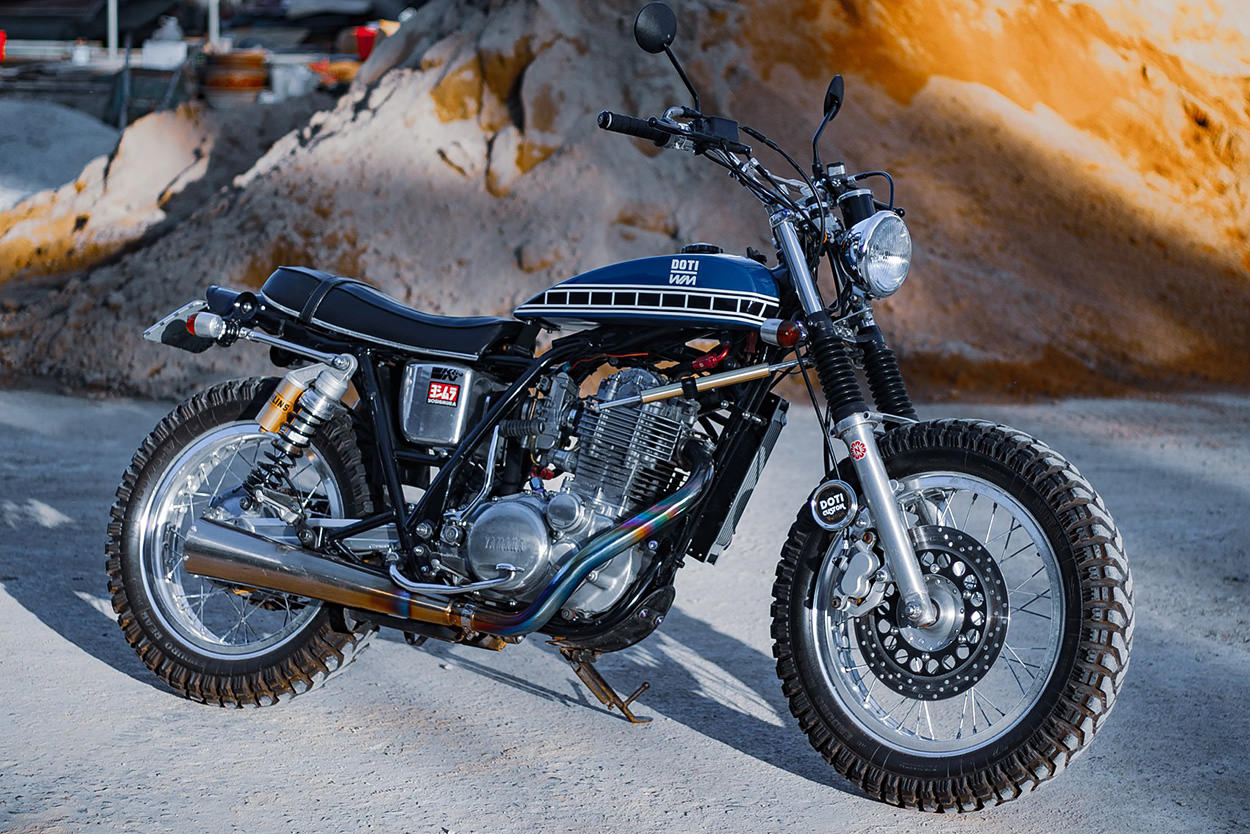 Yamaha SR400 by DOTi Motorcycle We’ve seen almost every iteration of the venerable Yamaha SR possible, but this SR400 stands out. It’s from Nguyen Dinh Trung at DOTi Motorcycle in Vietnam, and it manages to look amazing without conforming to any particular style. Plus it’s loaded with performance upgrades too. 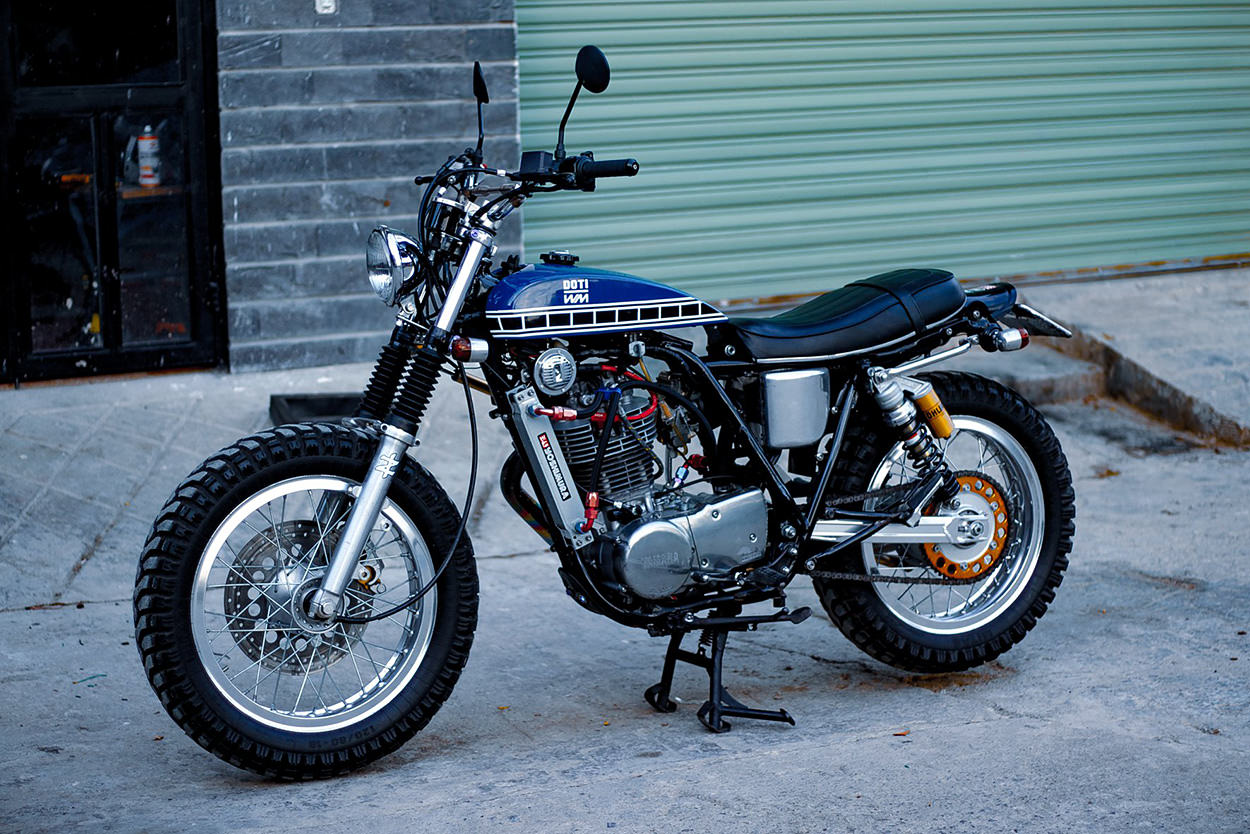 Nguyen grew up in a small town in Vietnam and built his first custom bike, a Honda CL50, at the age of 15. Going into university with $100 to his name, he started making and selling cheap motorcycle accessories—then used that money to buy, modify and sell progressively bigger motorcycles.

Nguyen opened DOTi Motorcycles six months ago, and runs the workshop as a solo operation. He built this 2000-model SR400 as a sort of rolling portfolio, picking the Yamaha for its simplicity. 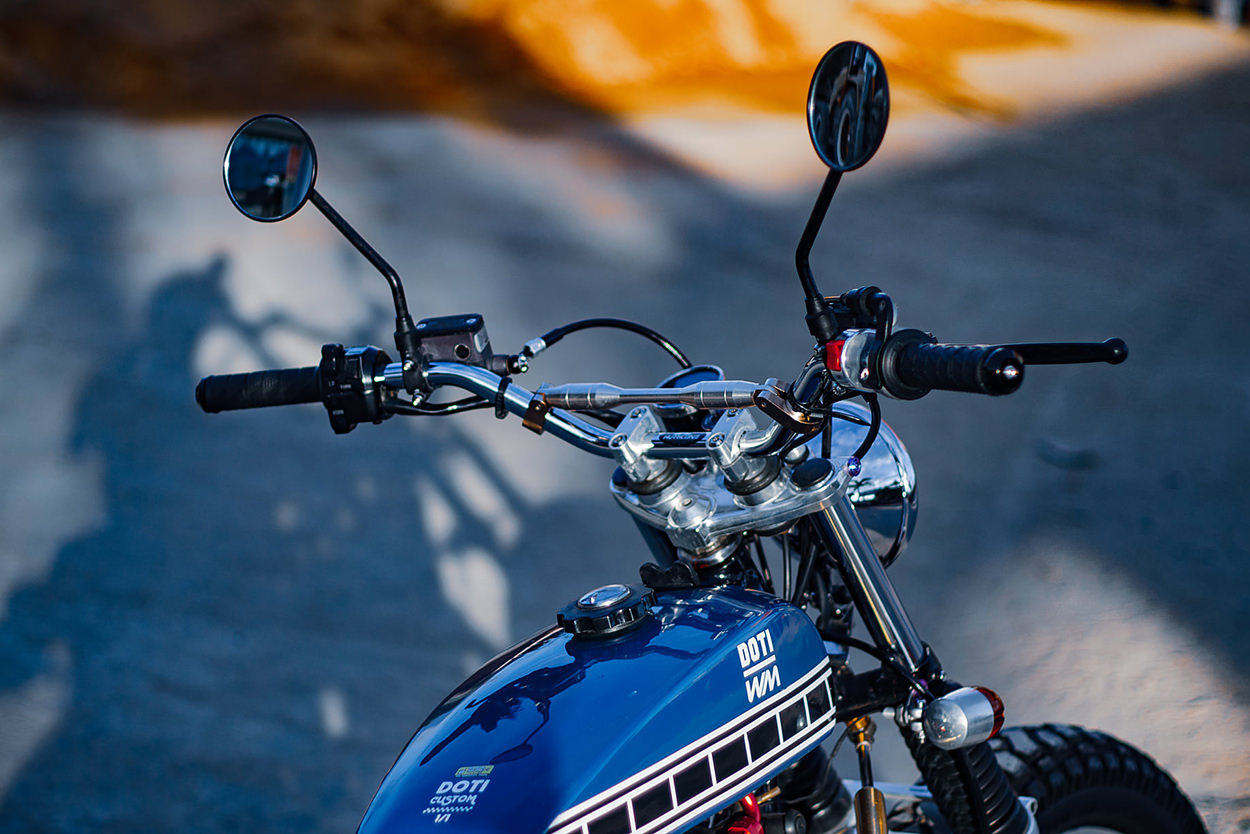 Much of the donor bike has gone, save for the engine, frame and forks. The bodywork is a mix of flat track and UJM styling, with a fiberglass tank matched to a chrome-trimmed saddle and ducktail rear fender. The tank, and the battery box under the seat, both came from WM Prod Team Co. Ltd in Japan.

The SR now rolls on Öhlins rear shocks, and the wheels have been relaced, with Takasago rims from a Suzuki ST400. 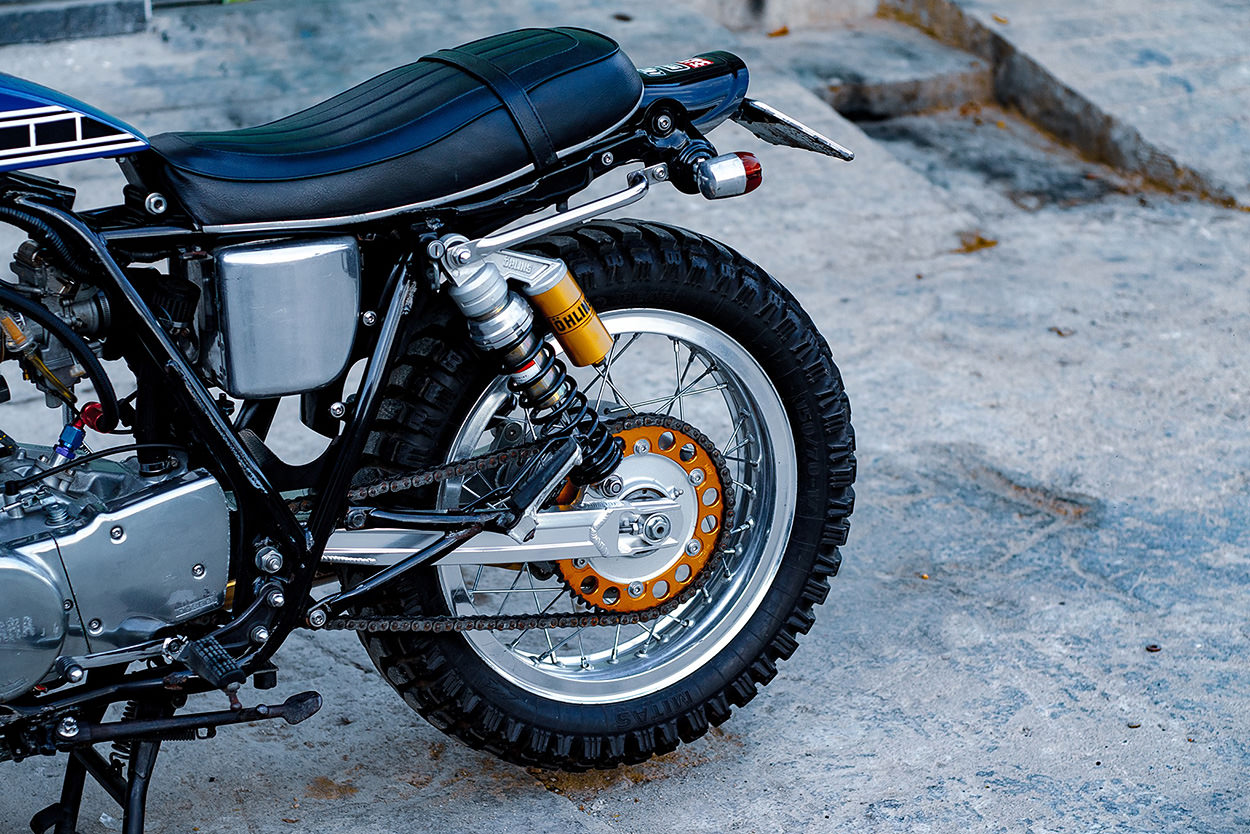 There’s also a WP Suspension steering damper, new handlebars, grips and switches, a Daytona fork brace, and a full complement of titanium fasteners. The exhaust system is new too, and bluing nicely so far.

Finished off with a classy blue throwback paint scheme, it’s clear that Nguyen has a sharp eye—and the know-how to execute his vision. We’ll be keeping an eye on him. [More] 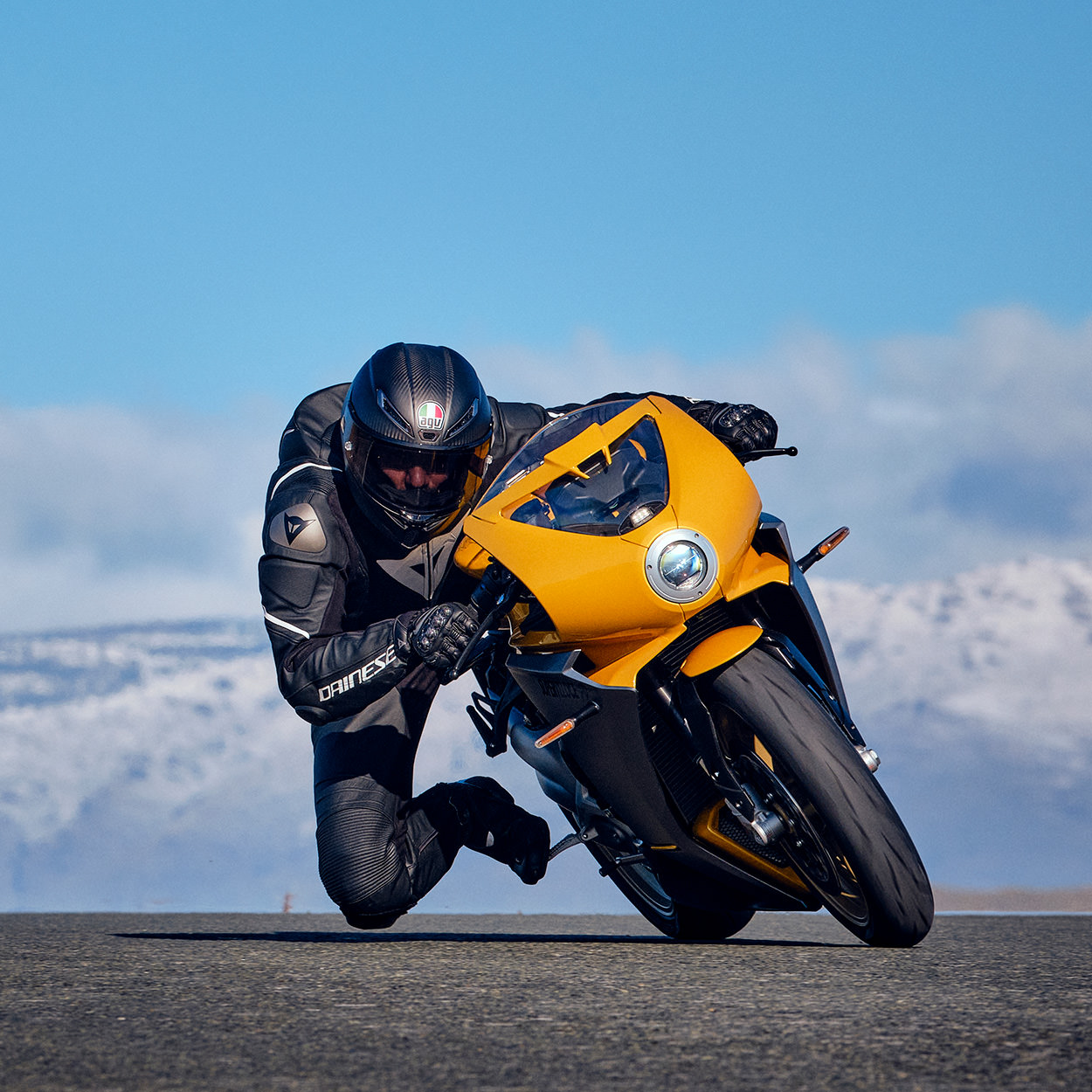 New MV Agusta Superveloce and Superveloce S If you’re a fan of both MV Agusta’s modern and historical designs, the Superveloce is quite alluring. Based on the triple-cylinder F3 800 sportbike, it features hints of classic 1970s race bike styling, carbon fiber bodywork and top spec components.

Now MV Agusta have updated the Superveloce—and released a new ‘S’ version along with it. Both bikes share a host of engine and chassis upgrades, but the S adds a couple of distinct styling tweaks. 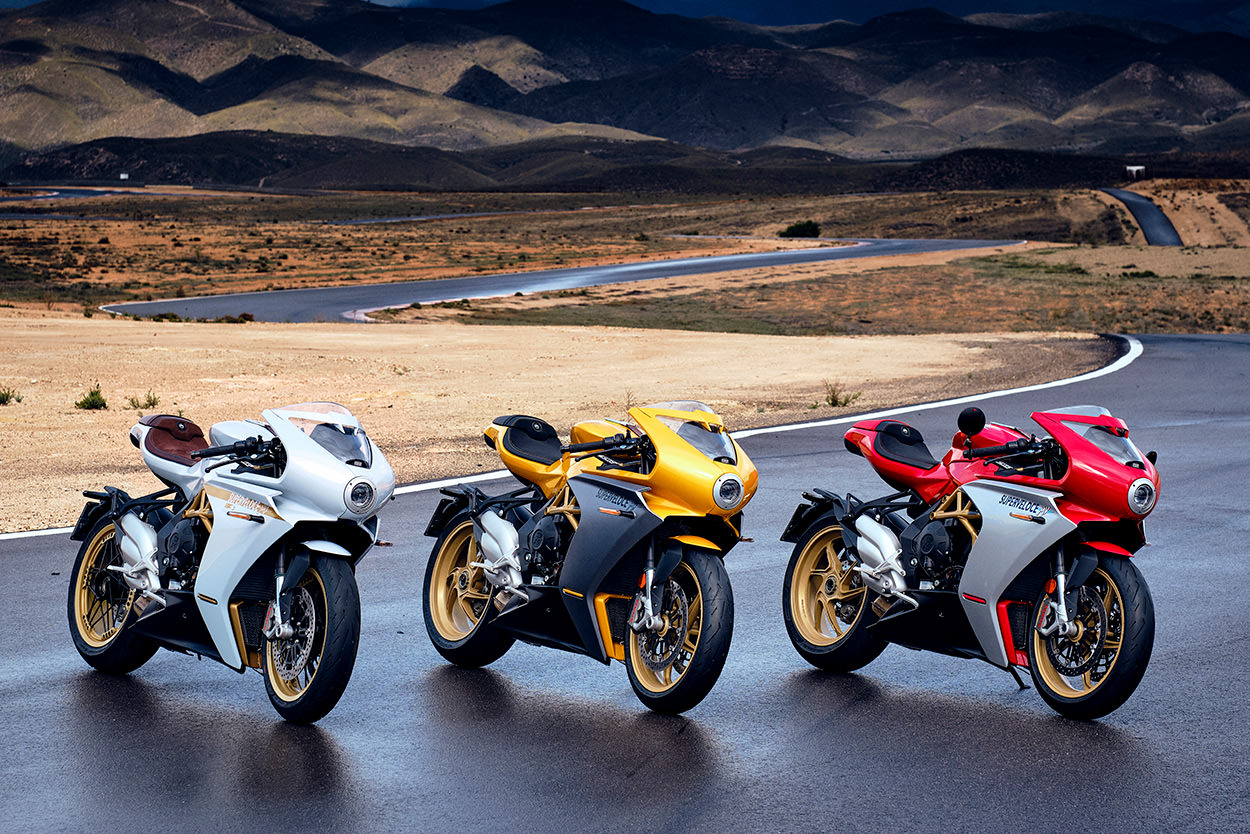 MV Agusta have now made the Superveloce’s motor Euro5 compliant, without culling its 147 hp output. The updated motor uses a DLC treatment (diamond-like coating) on the new tappets, new titanium valve guides, and a completely redesigned exhaust system. The injectors and oil radiator are new too, and the ECU’s been reprogrammed.

The Superveloce also has an updated clutch, and a new electronics package that now includes an inertial measurement unit. MV Agusta have fettled the frame too, with reworked frame plates to increase stiffness. 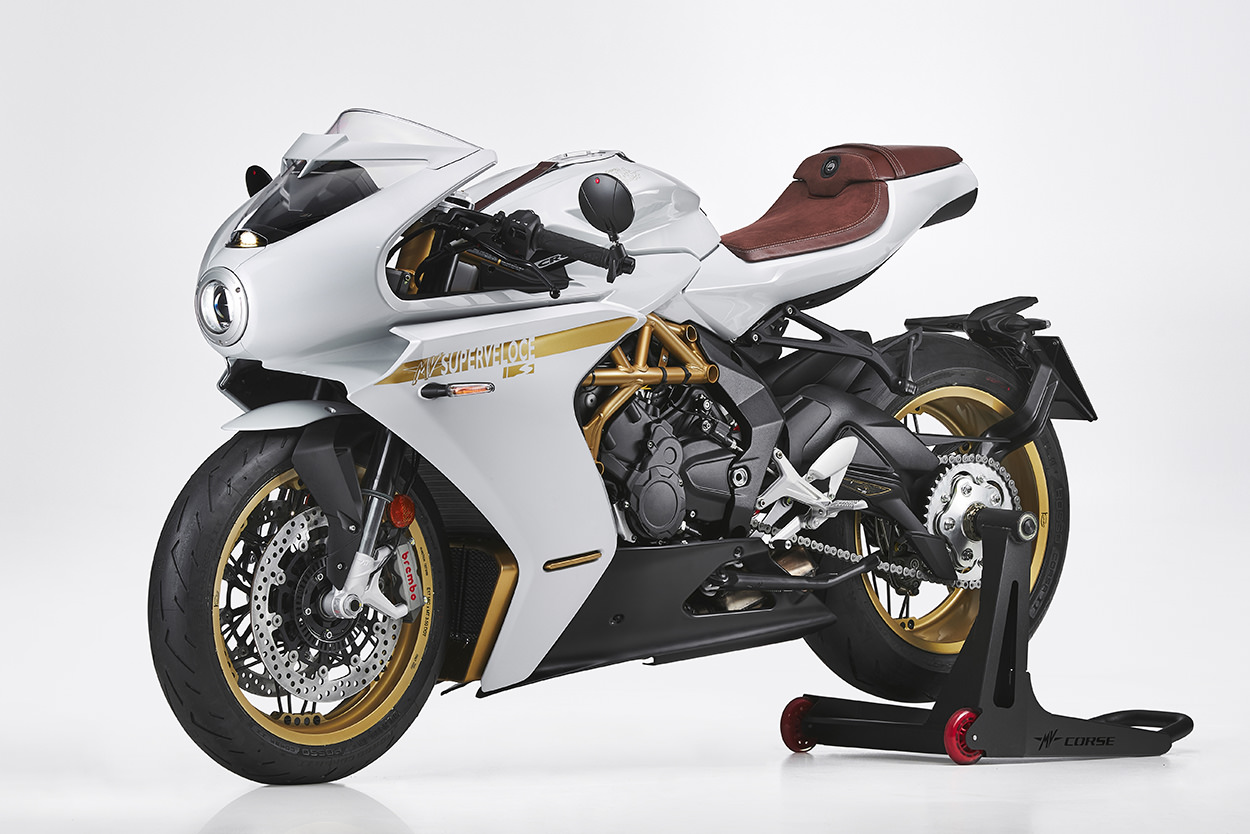 The Superveloce S [above] adds a unique white livery, with Alcantara trim and a pair of drool-worthy spoked wheels. There’s a racing kit for it too, which includes a race seat and rear hump, an Arrow exhaust and an ECU with special mapping. [MV Agusta Superveloce | Superveloce S] 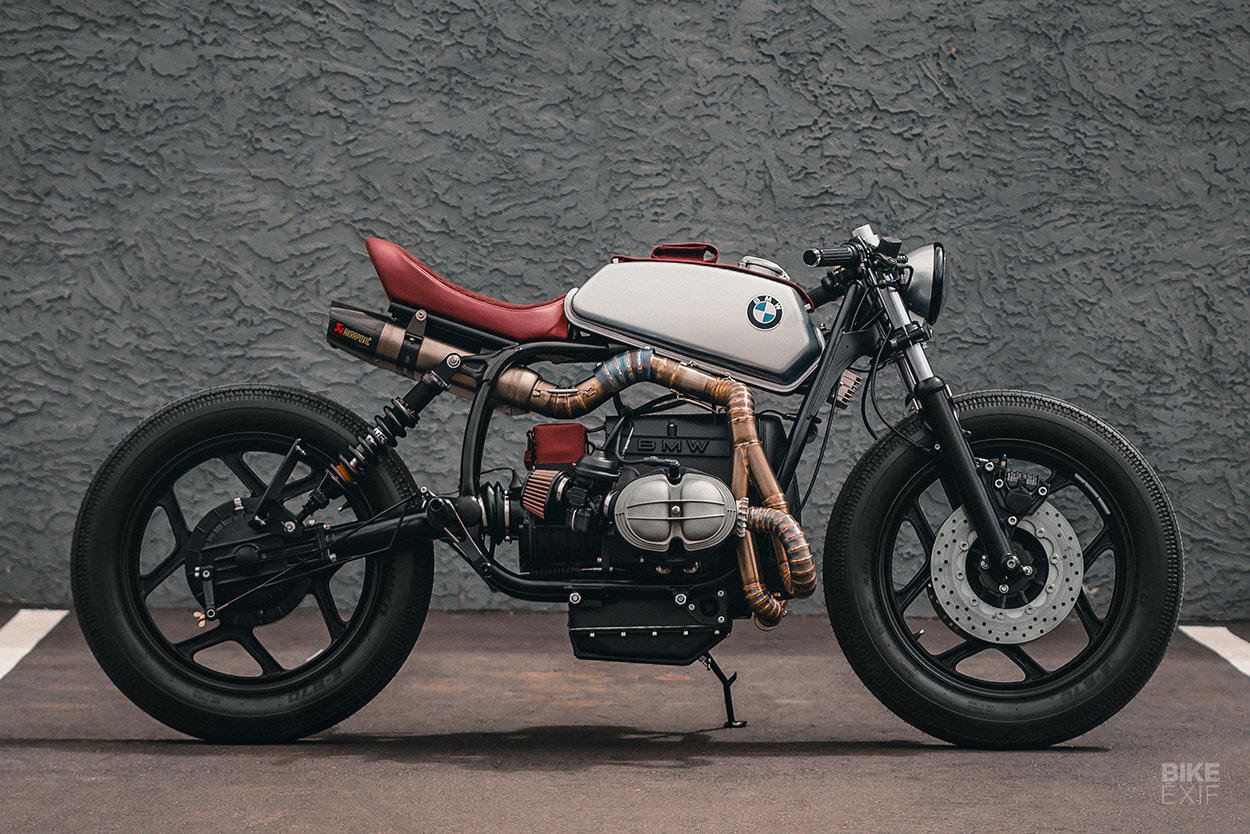 BMW R100 by IRON & WYLD Arjan van den Boom is one of those savvy custom builders that’s actually managed to turn his passion into a profitable business; Ironwood Custom Motorcycles. The shop has a distinct style and there’s a demand for their work, even outside of their home base in the Netherlands. So Arjan’s now partnered with Nathan Shew, founder of the Arizon-based custom shop WYLD Garage Co., to offer Ironwood’s signature builds across the pond.

Dubbed ‘Born in Amsterdam, Built in Scottsdale,’ the IRON & WYLD collaboration means that US customers can order an Ironwood-style custom build, without having to factor in the cost and logistics of importing a motorcycle. 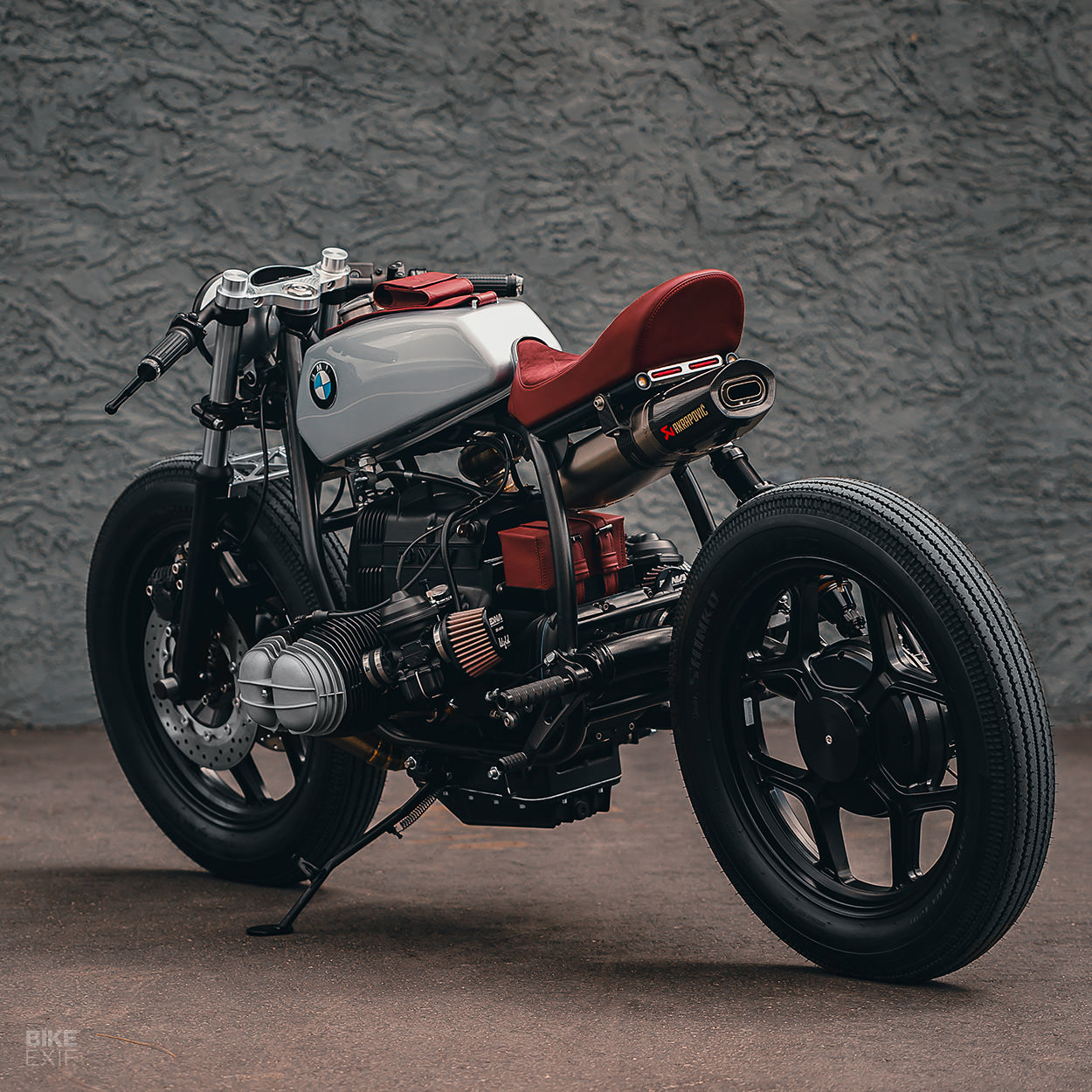 Their latest project should look familiar to Bike EXIF readers—it’s a fresh take on the ‘Mutant‘ boxer design that Ironwood first released four years ago. This one started as a 1988 BMW R100RT that came to WYLD’s shop in stock form, but in pretty bad shape. So the first step was to tear the whole thing down to just an engine block, rebuild the motor, and completely redo the wiring.

Just like the original Mutant, this bike’s sporting an aggressive, almost unnatural stance. WYLD lowered the front suspension and inserted Racetech springs, and added a Racetech G-Series shock out back. 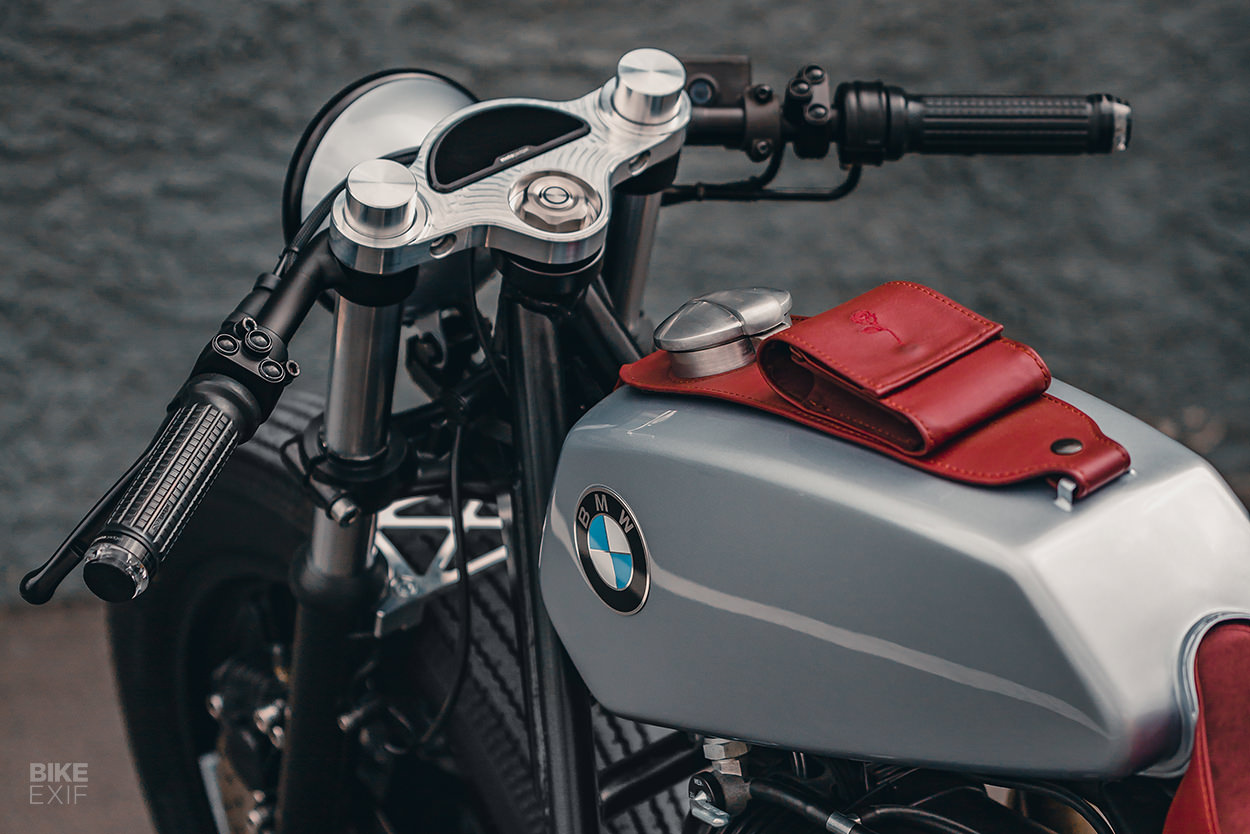 The bodywork consists of a Zundapp moped fuel tank, imported from Germany, and a stubby solo seat. WYLD picked a silver from Porsche’s catalog for the paint on the fuel tank and headlight. A local shop, Unique Upholstery, handled the red leatherwork, which extends to the seat, tank strap and battery box.

The cockpit features Tommaselli clip-ons, a Domino throttle and a Grimeca brake master cylinder, with Motogadget grips and bar-end turn signals, and a Motogadget dash sunken into a Cognito Moto top yoke. 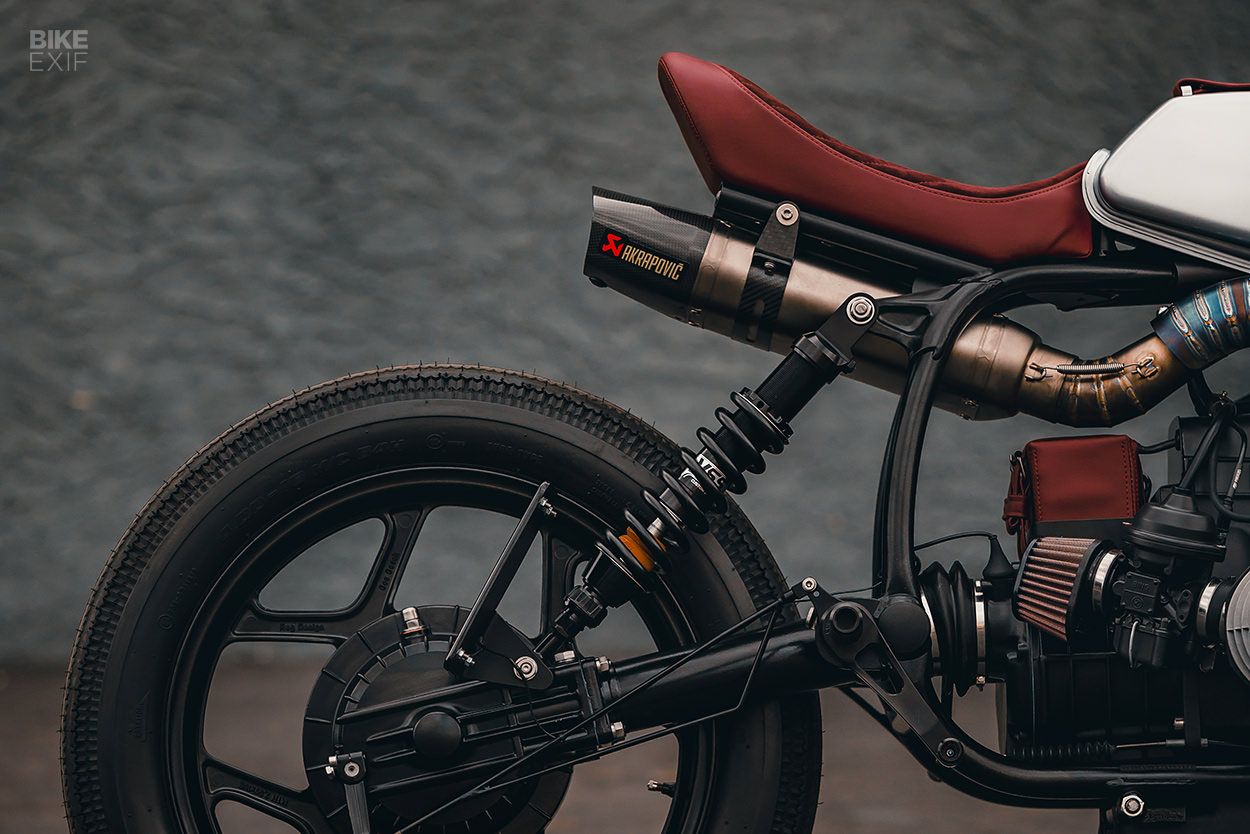 Another signature Mutant touch is the snaking exhaust system. It was pieced together from sections of stainless steel, and exits in an Akrapovič muffler under the seat, with a titanium heat shield to protect the rider’s leg.

The fact that this is unmistakably an Ironwood build is a testament to how well the IRON & WYLD partnership works. [WYLD Garage Co. | Ironwood Custom Motorcycles | Images by Justin Wade Orton]

Honda Hawk RC31 by Aaron Colton Stunt rider Aaron Colton knows how to defy physics on a motorcycle, but he’s more than just a rider—he loves building and restoring bikes too. His latest project is a Honda Hawk 650, picked up as an unfinished project with a number of hidden issues.

Aaron does all the work in his home garage, taking the Hawk from ragged donor to sharp canyon carver in just three weeks. The process is neatly documented in this 25-minute video [above], culminating with an epic test ride in the Malibu canyons. [Via] 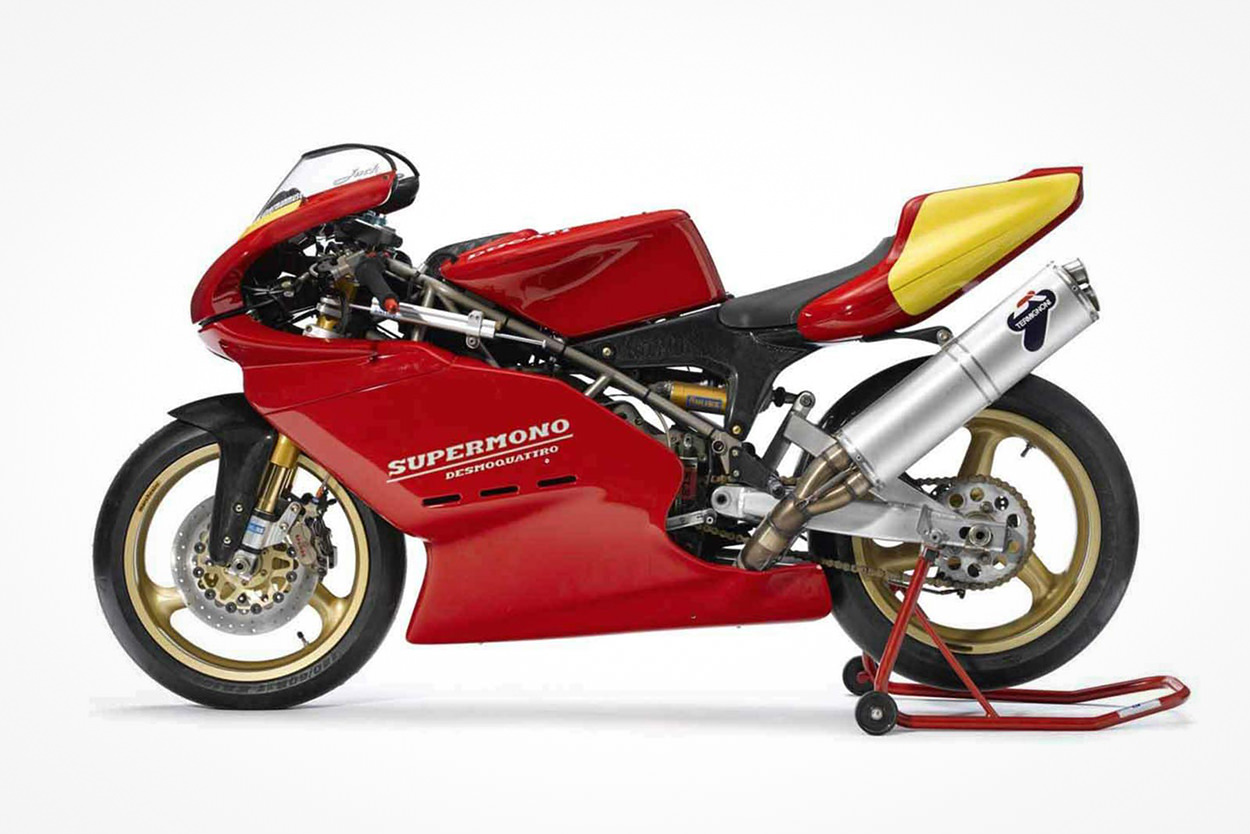 Pierre Terblanche speaks about the Ducati Supermono The Supermono is as fascinating as it is rare. Designed as a single-cylinder machine, and named for the Supermono class it was designed to compete in, only 65 were ever made. If you can find one, it’ll cost you.

The Ducati Supermono owes its looks to the renowned South African designer, Pierre Terblanche, and was one of his earliest projects. In this video, he sits down with the Barber Museum’s Brian Case to talk about the Supermono’s development. Highlights include insight into how the motor used a ‘ghost’ second cylinder to help balance it, and what it was like designing bikes before CAD was a thing.

At 45 minutes long, the video [below] is more of a relaxed conversation than a sizzle reel. But if you’re even remotely interested in the Supermono or Pierre’s career, it’s worth a watch. [Via]