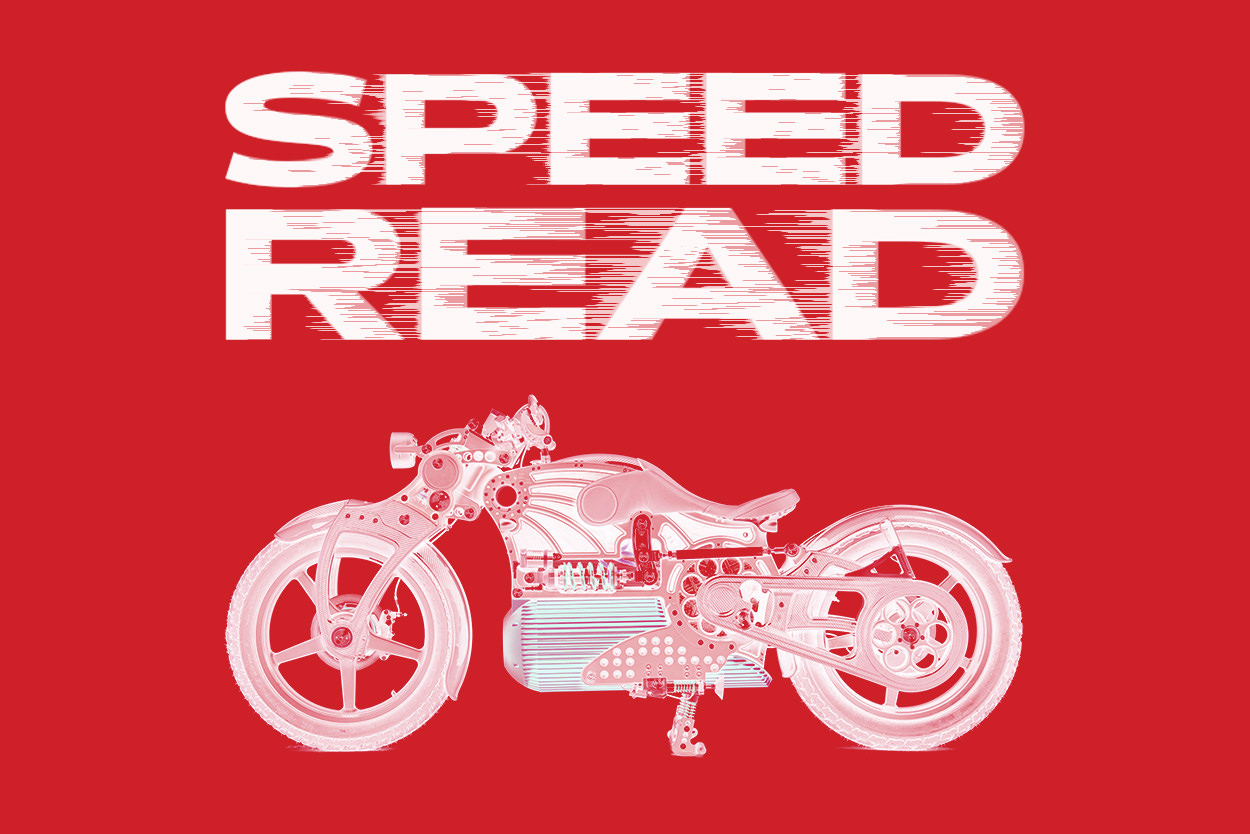 Our round-up for the week includes a well-used Moto Martin-framed endurance racer, and two BMWs; an R nineT and an R18. But first, we take a closer look at the electric-powered Curtiss One. 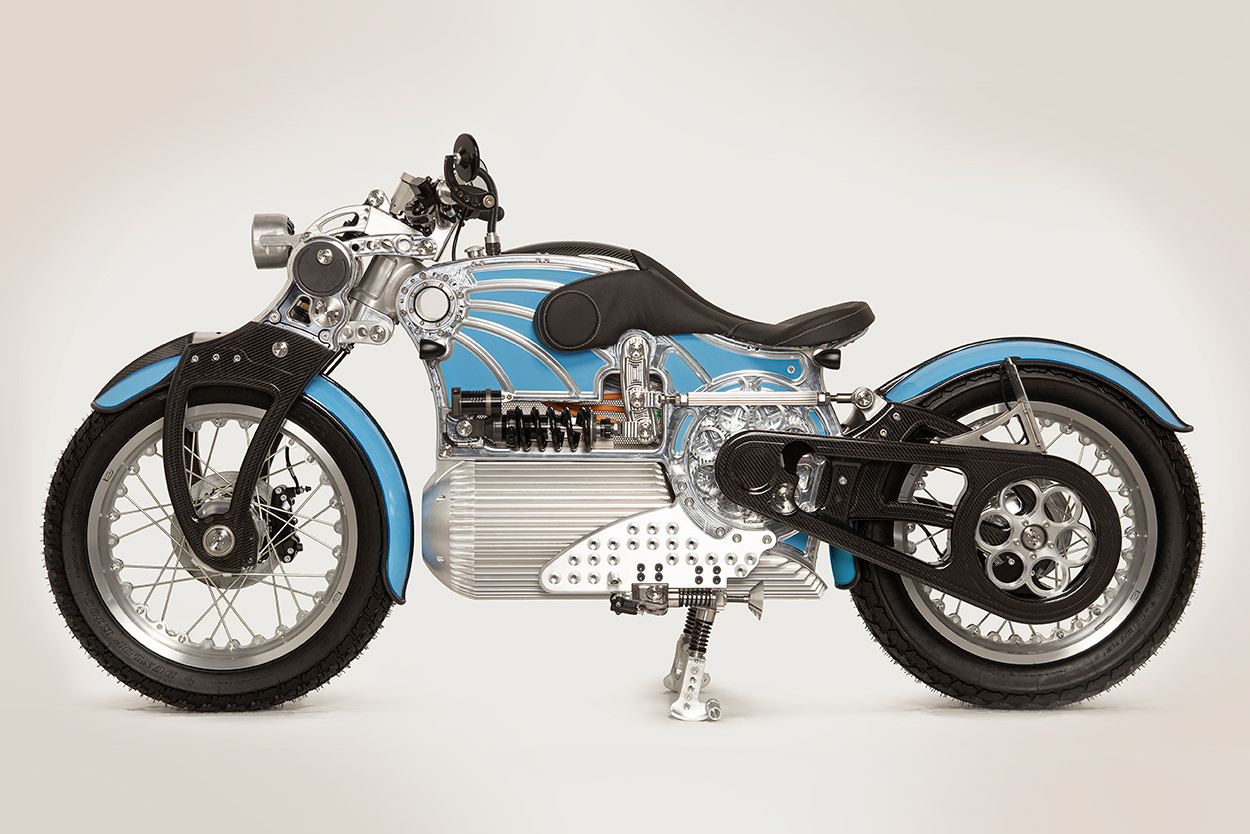 A look at the Curtiss One When a new, boutique manufacturer pops its head up, there’s always fear that their left field creations are just vaporware. But Curtiss Motorcycles reports that their electric motorcycle, the One, is now actually entering production. And it’s an intriguing machine.

If you haven’t been following the news, Curtiss is owned by Matt Chambers (the guy who used to run Confederate), and their lead designer is JT Nesbitt (the guy behind the Wraith, the G2 and incredible Magnolia Special car). The company’s aiming for the same high-end, eclectic vibe as Confederate, but with a twist: they’ve gone electric. 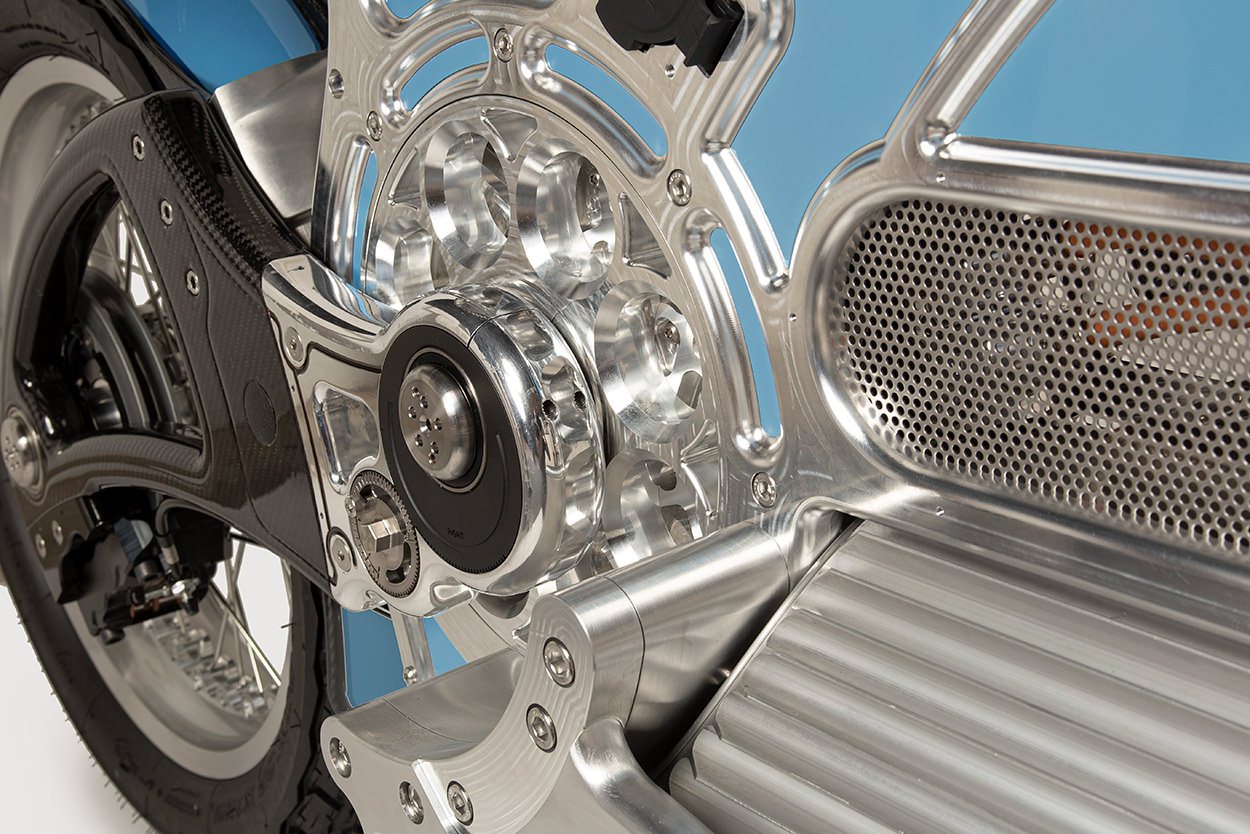 Curtiss cites a number of reasons for the move, but there’s one that really clicks with us. They say that with less moving parts, no noise or vibration, and no gears to change, electric motorcycles free up the rider’s headspace to focus more on the ride. (It’s true too, as we learnt when we rode the Harley-Davidson LiveWire.)

The One is loaded with some pretty impressive and out-there engineering. There’s no clear distinction between bodywork and chassis, with multiple billet aluminum structural components and panels all bolting together to form the central form. Housed inside is a Yasa Axial Flux drivetrain, along with a unique battery system that immerses the cells in a non-conductive coolant. 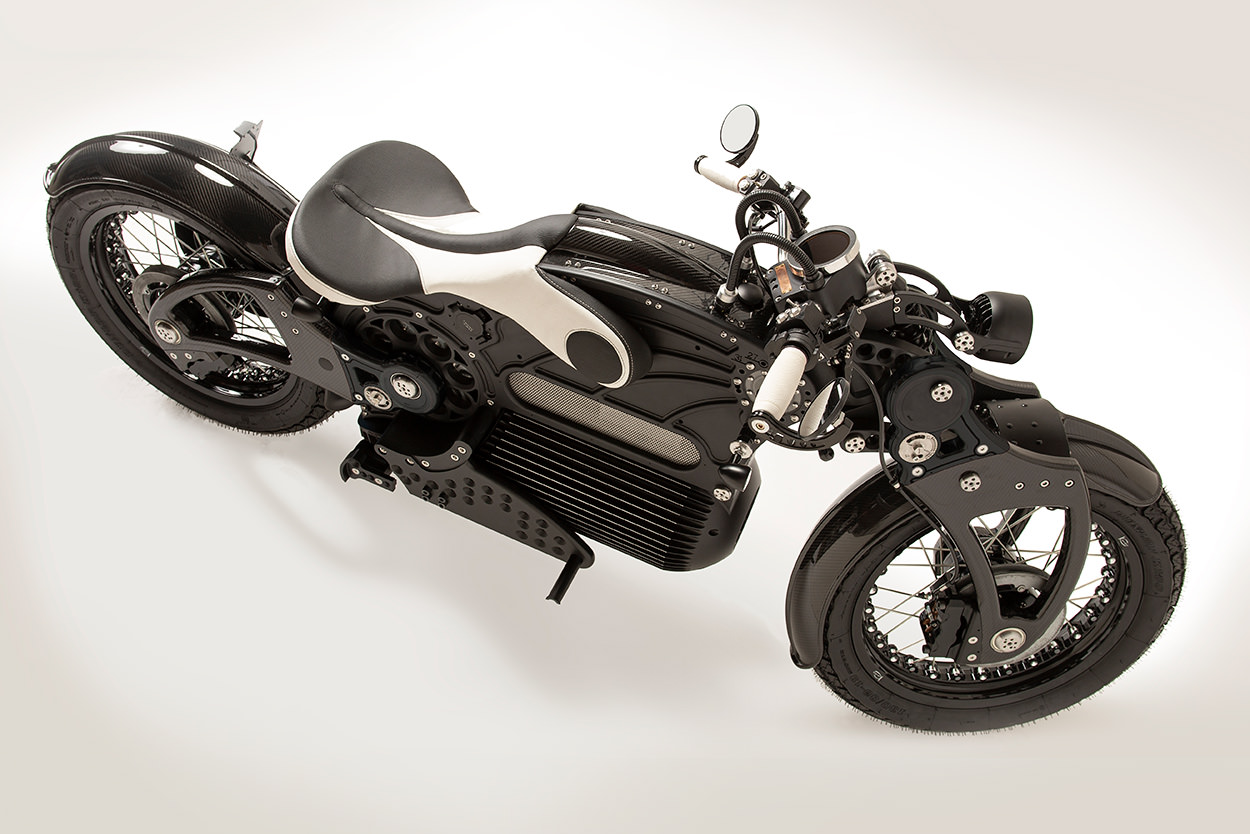 The suspension uses a sort of modern, multi-link girder system up front, and a swingarm that moves on a pivot attached directly to the driveshaft mount. Look closely, and you’ll notice that both the front and rear suspension ‘arms’ are identical. The system includes adjustable geometry, and Curtiss have paid particular attention to ergonomics too, with a fairly neutral rider triangle.

There’s also a focus on creating what Curtiss calls an “analog electric experience,” because other than the obvious tech within the motor, there’s little in the way of rider aids or electronic gadgetry. Claimed numbers are 120 hp at peak with a steady output of 87 hp, and 147 lb-ft peak torque, with a steady output of 120 lb-ft. It weighs in at a remarkable 425 lbs, but Curtiss haven’t quoted any range or charging time figures yet. 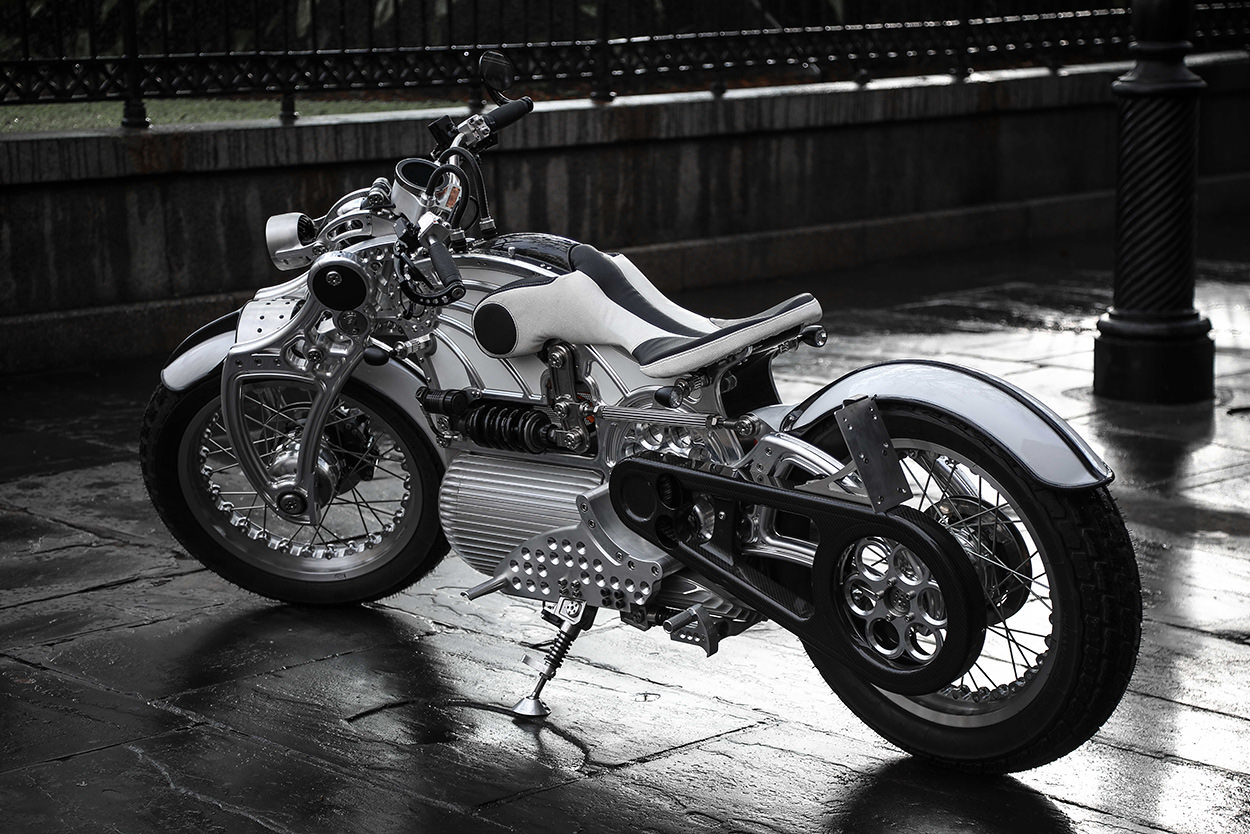 If you want the One in your garage, you’ll need to reserve a build slot. Curtiss are building 90 units of the entry-level model, with a $1,000 non-refundable deposit and a starting price of $90,000, to be delivered in mid-2022.

There’s a top of the line model too, limited to 15 units, all hand-assembled by JT Nesbitt in his New Orleans studio. Featuring higher-end materials and a wide range of personalization, it’ll cost you $115,000, with a $30,000 non-refundable deposit, with delivery scheduled for late-2021. [Curtiss Motorcycles | Curtiss One launch video] 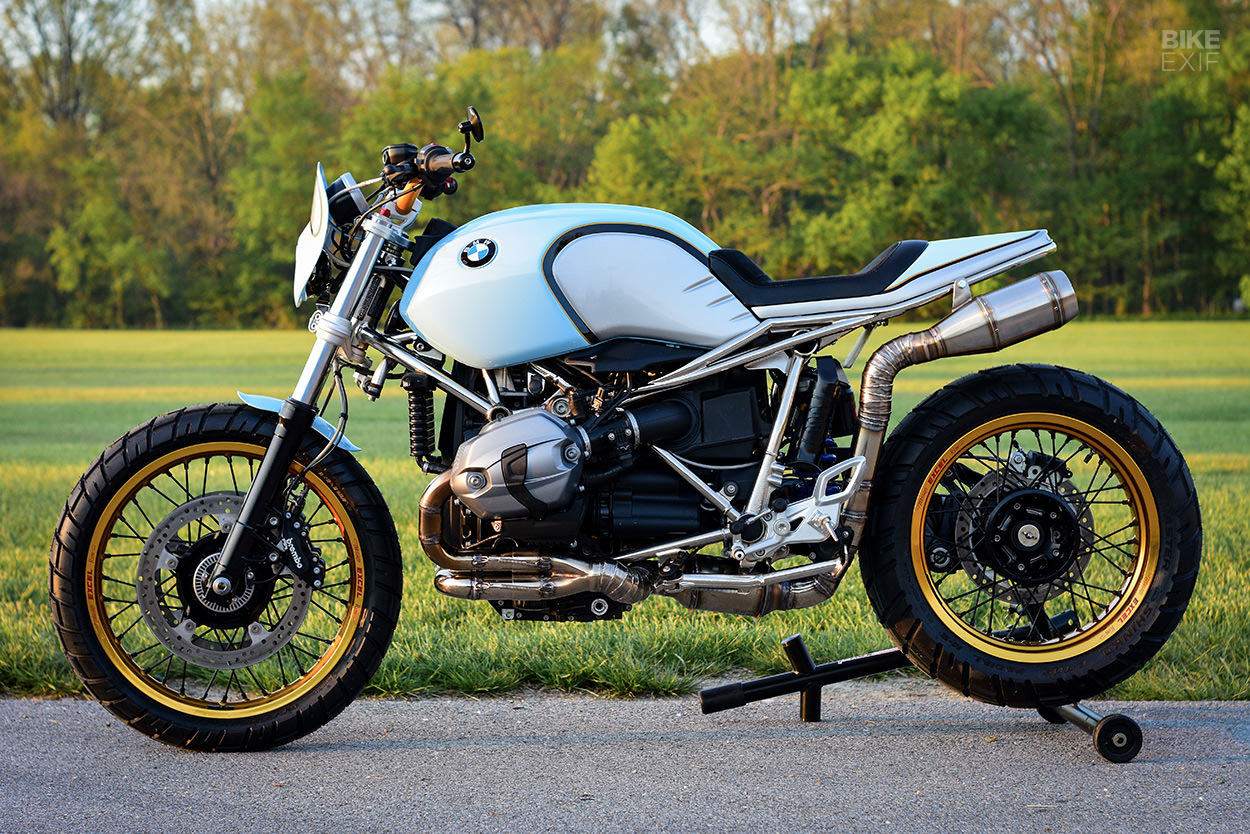 BMW R nineT by Parr Motorcycles If you need proof that all BMW R nineT variants are pretty much the same bike under the hood, Spencer at Parr Motorcycles in Indiana has it. His customer came in with the cafe racer-style R nineT Racer, and left with this handsome street scrambler.

Spencer’s more comfortable working on single-cylinder dual-sport bikes than big street bikes, but he’s been a fan of the R nineT for a while, so he decided to take it on. His mandate was to build a scrambler with a nickel-plated frame, keep the OEM tank and airbox, and match the color to the blue of his client’s helmet. 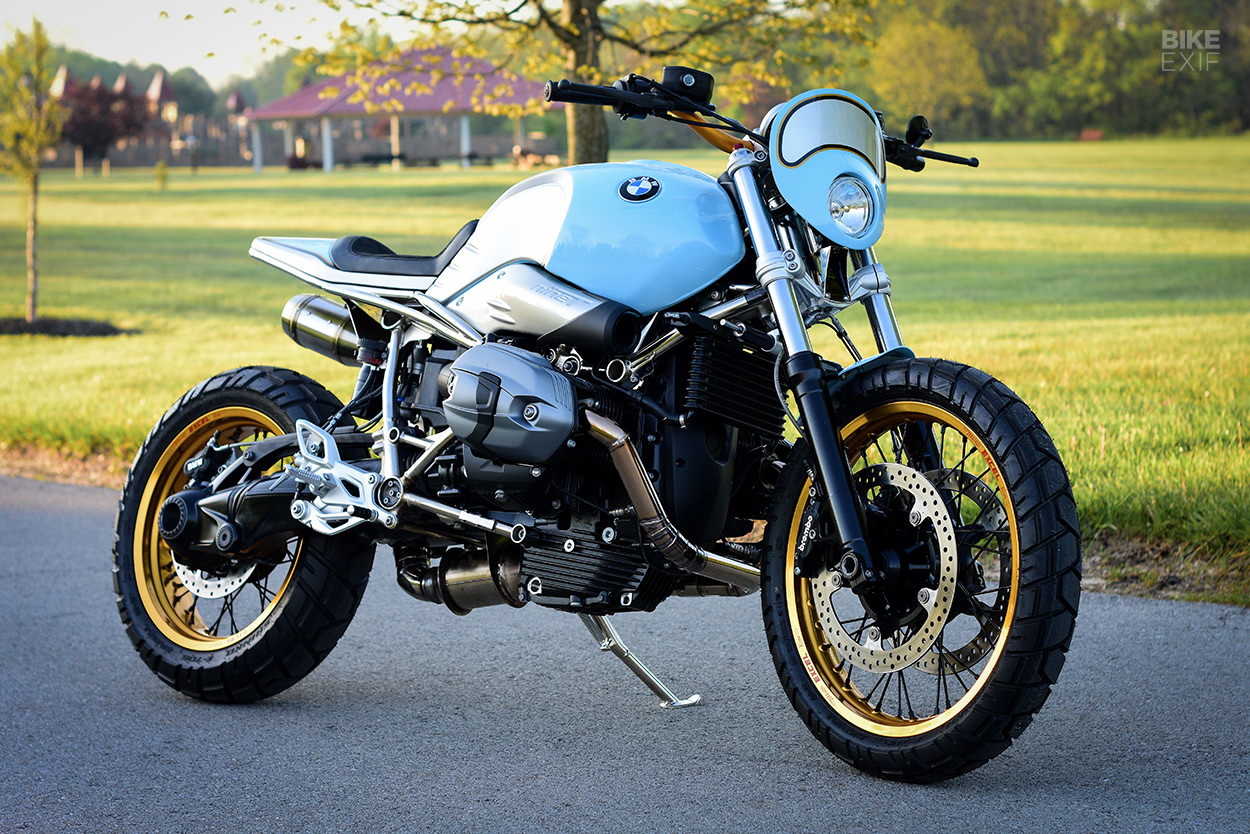 Spencer unbolted the nineT’s removable subframe, then built a new one to support a custom-made tail section. He designed it so that the bodywork with sit on top of the frame—leaving it exposed to show off the nickel plating. It’s finished off with vinyl and Alcantara upholstery, and an LED taillight embedded in the back.

Up front, Spencer swapped the Racer’s clip-ons for a set of ProTaper bars. The client specifically wanted a small headlight, so he shaped up a vintage enduro-style nacelle to help tuck away the stock dials. Then he installed a set of Rizoma blinkers up front, with Motogadget items at the back. 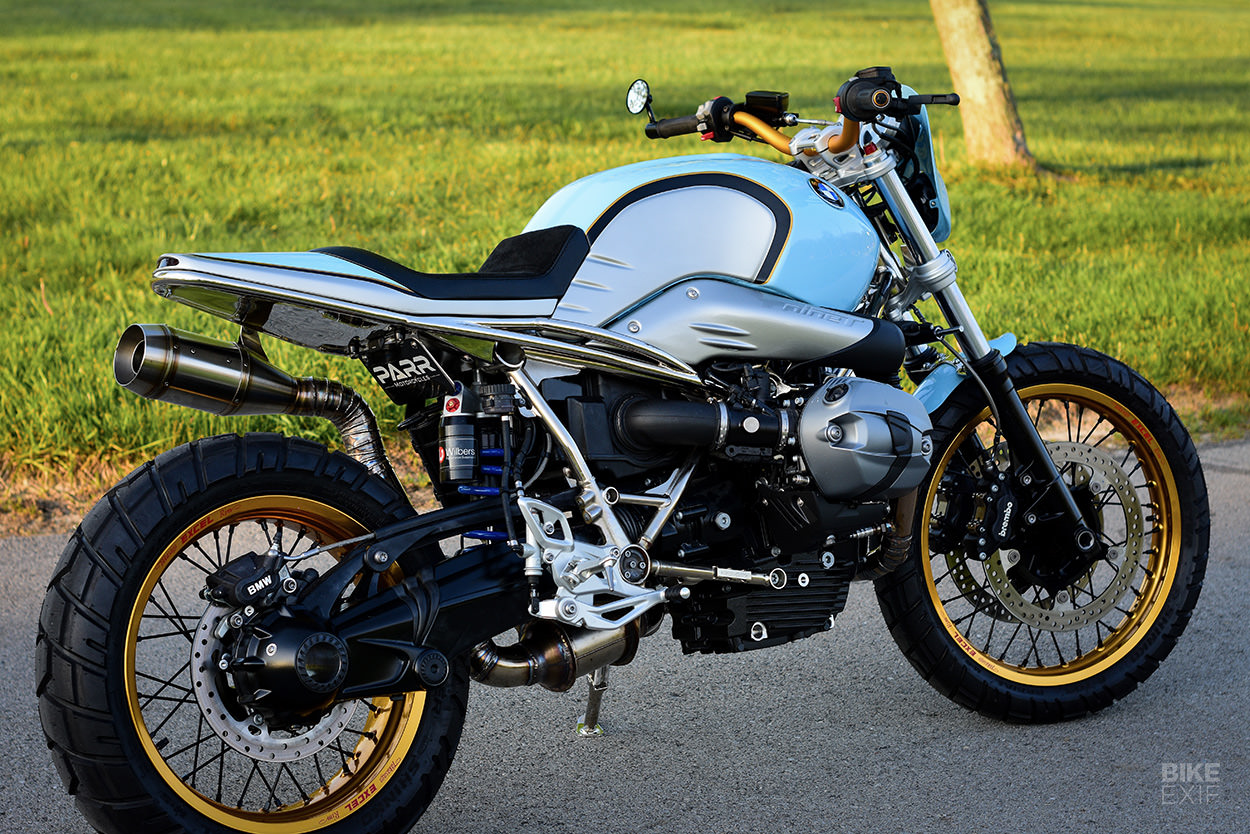 The wheels were swapped for 19F/17R spoked units using Excel rims, and the suspension was upgraded with Wilbers components. The exhaust took a little creative thinking though—the client lives in California, so it had to be CARB compliant. Spencer built a two-into-one system with a catalytic converter inside, then added a Competition Werkes muffler.

As requested, the bike was then painted baby blue, with black and silver accents. Finishing it off is just the subtlest hint of gold striping, to match the handlebars and wheels. [Parr Motorcycles] 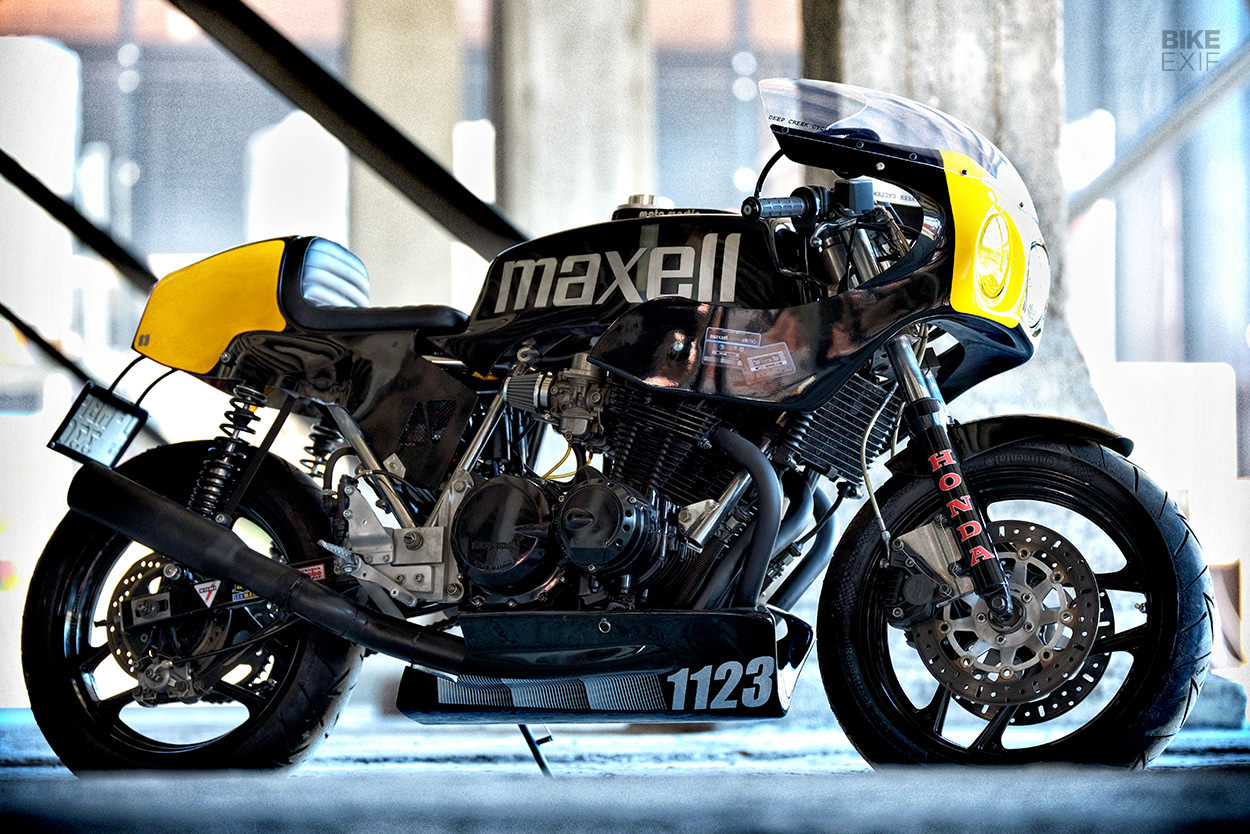 Warp Speed Classic Racing’s Moto Martin race bike Some time ago, we mentioned that Kris Reniers fielded a Moto Martin-framed bike in the classic European endurance racing championship. Now we’ve got a glimpse at the bike that Kris and his friend Christophe Heyligen have been racing for the past several years. And it’s a stunner.

Christophe tells us that the pair had the zany idea to start endurance racing about ten years ago. They scraped enough money together for a Honda CB900 Bol d’Or, and eventually sought out a coveted Moto Martin frame. “First, we were sold a scandalous piece of space frame that we returned and exchanged for a less sought-after Poutre tubular frame,” Christophe tells us. 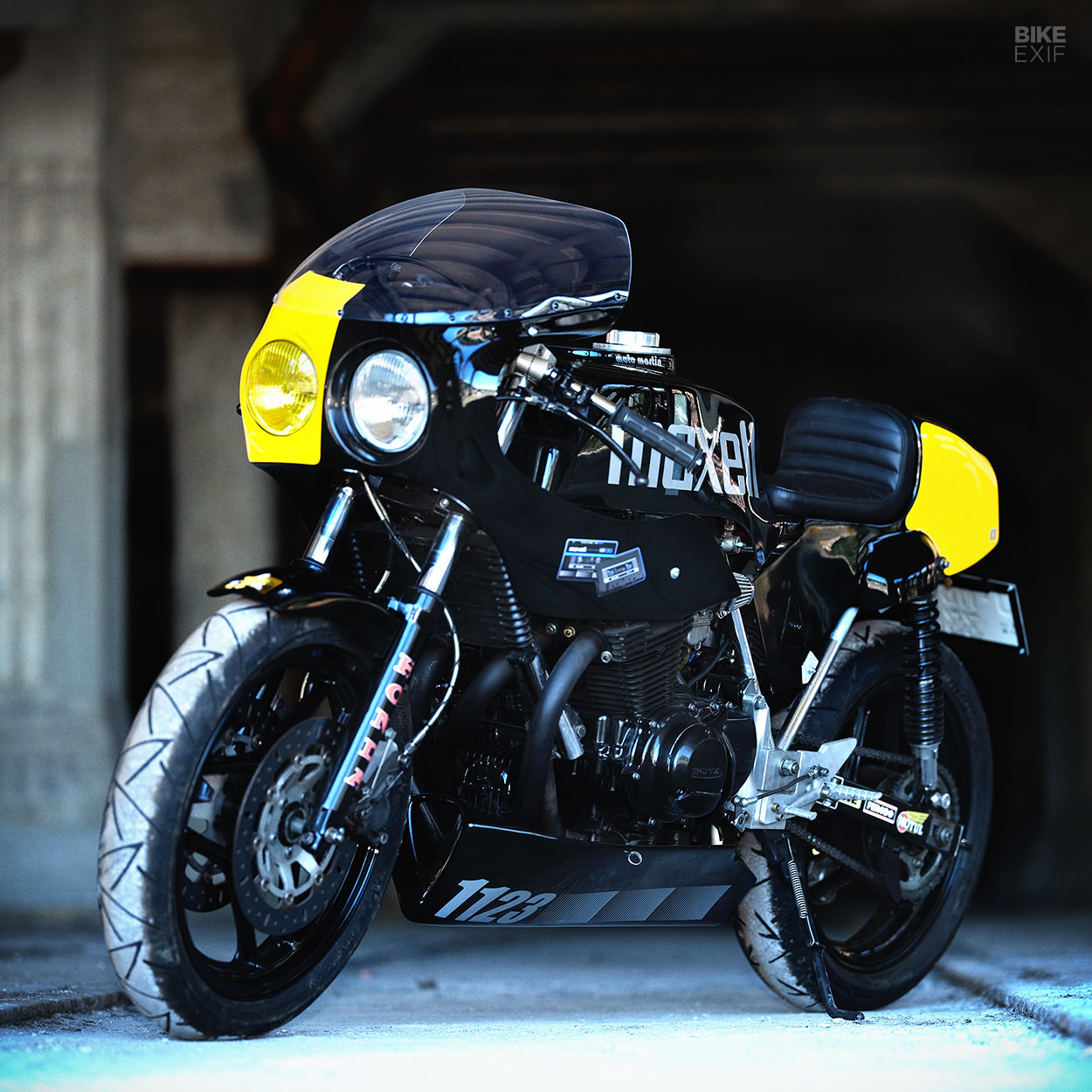 The guys put the bike straight onto the bench; Christophe worked on the bodywork, while Kris tackled the rest. A year later, an 1100 Honda block went in—something that George Martin himself advised against when the guys invited him to visit their pits at Spa Francorchamps, and commissioned him to make a fuel tank for the bike.

“Never was there anything torn or broken on the frame,” says Christophe, “even while we saw this happen with other teams.” 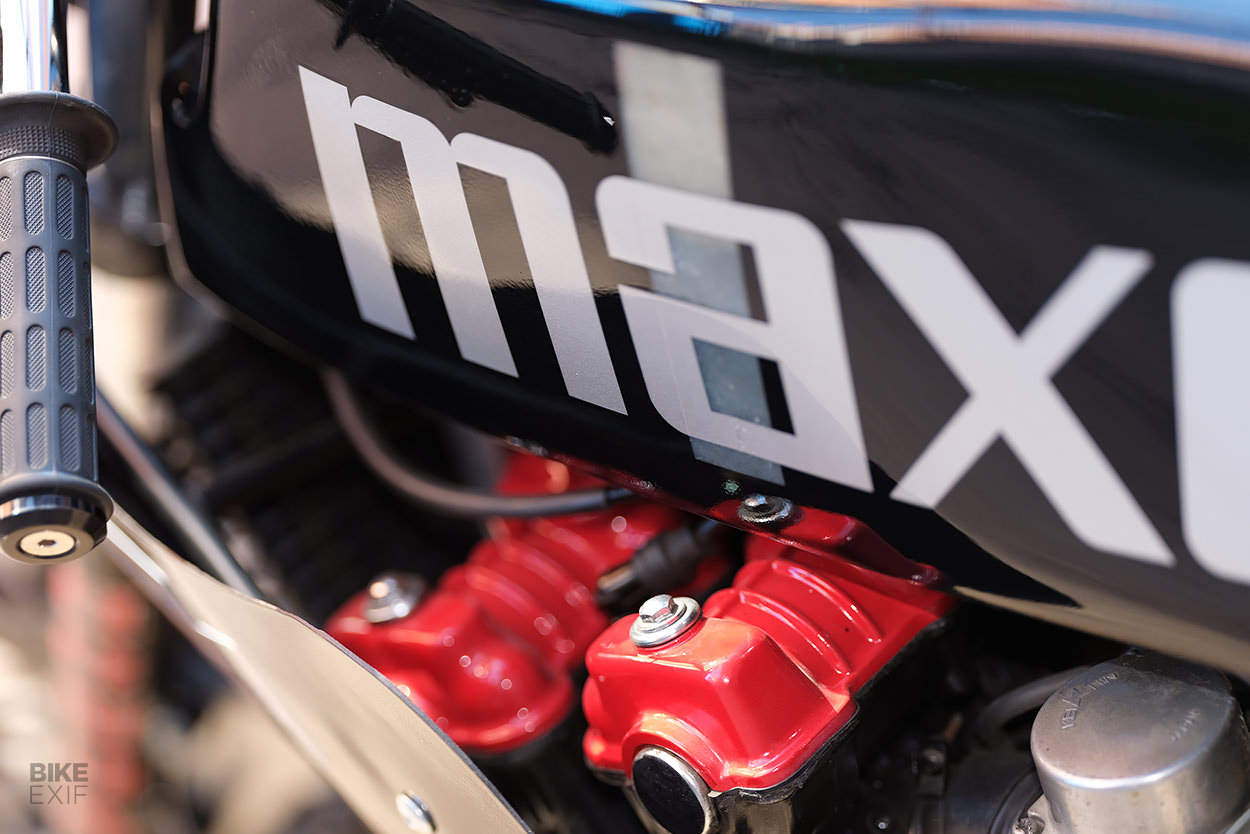 The bike has more stories to tell than we could cram in here. It’s raced at Spa Francorchamps, Assen, the Nürburgring, Circuit Paul Ricard and more. And it’s gone up against greats like Guy Martin, John McGuinness and Stéphane Mertens. At some point Kris broke his foot badly in a race and stepped back; the team went through two replacement riders, each adding more tweaks to the bike.

As it stands, the bike features Suzuki GSX-R750 wheels, Brembo brakes, modern Kawasaki fork internals, custom CNC-machined yokes, Ikon shocks, and a beefed up 1,123 cc motor. The bodywork comes from all over, contrasted with a few off-the-shelf parts, like a Motogadget speedo and a Racing tacho. 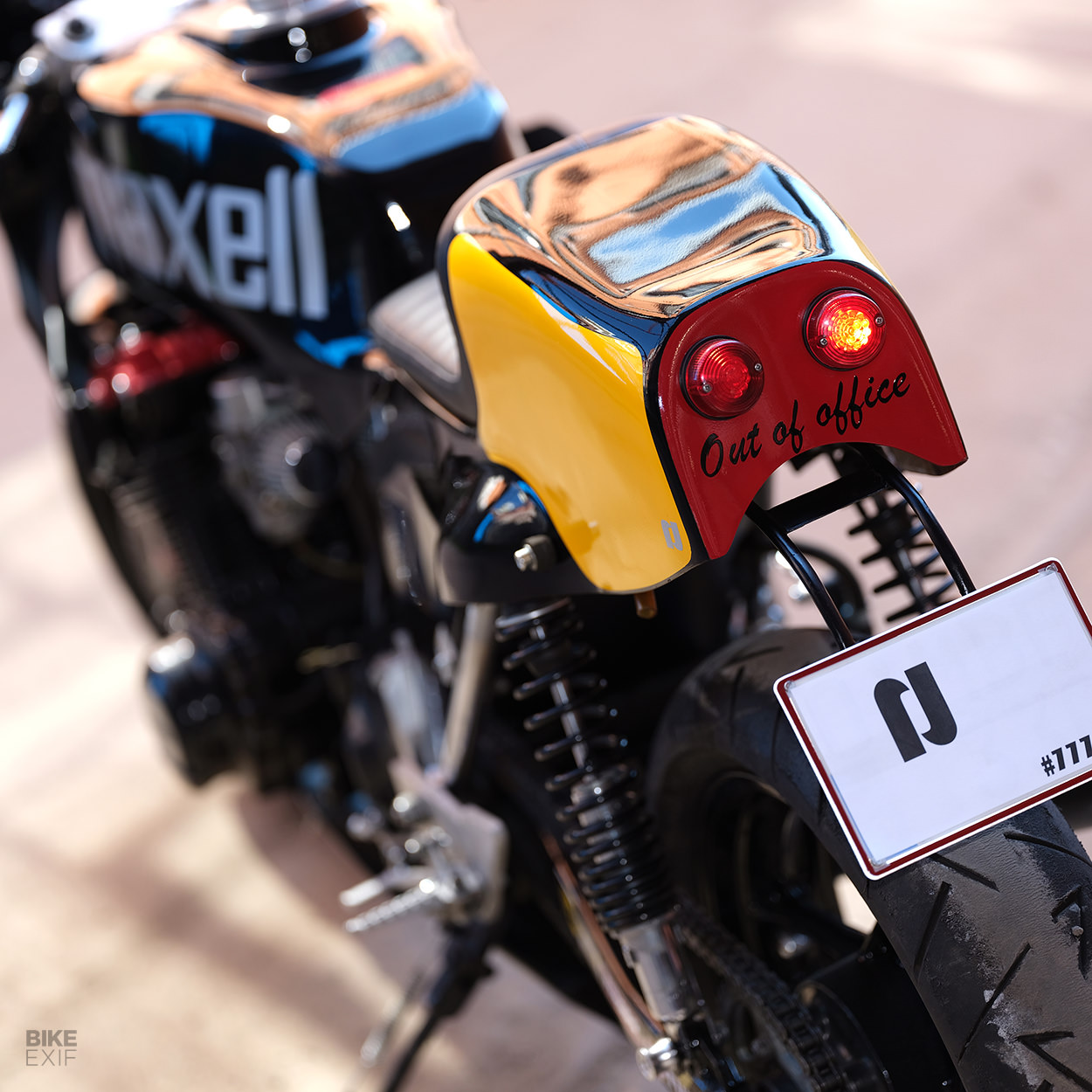 Kris and Christophe have moved onto racing different bikes now, so the Moto Martin’s being retired and converted for street use.

“We learned all about classic endurance on this bike,” says Cristophe. “We raced, laughed and cried on this bike, we crashed and burned this bike, and now, for hopefully the last time, Kris and I have cleaned and revamped it.” [Warp Speed Classic Racing] 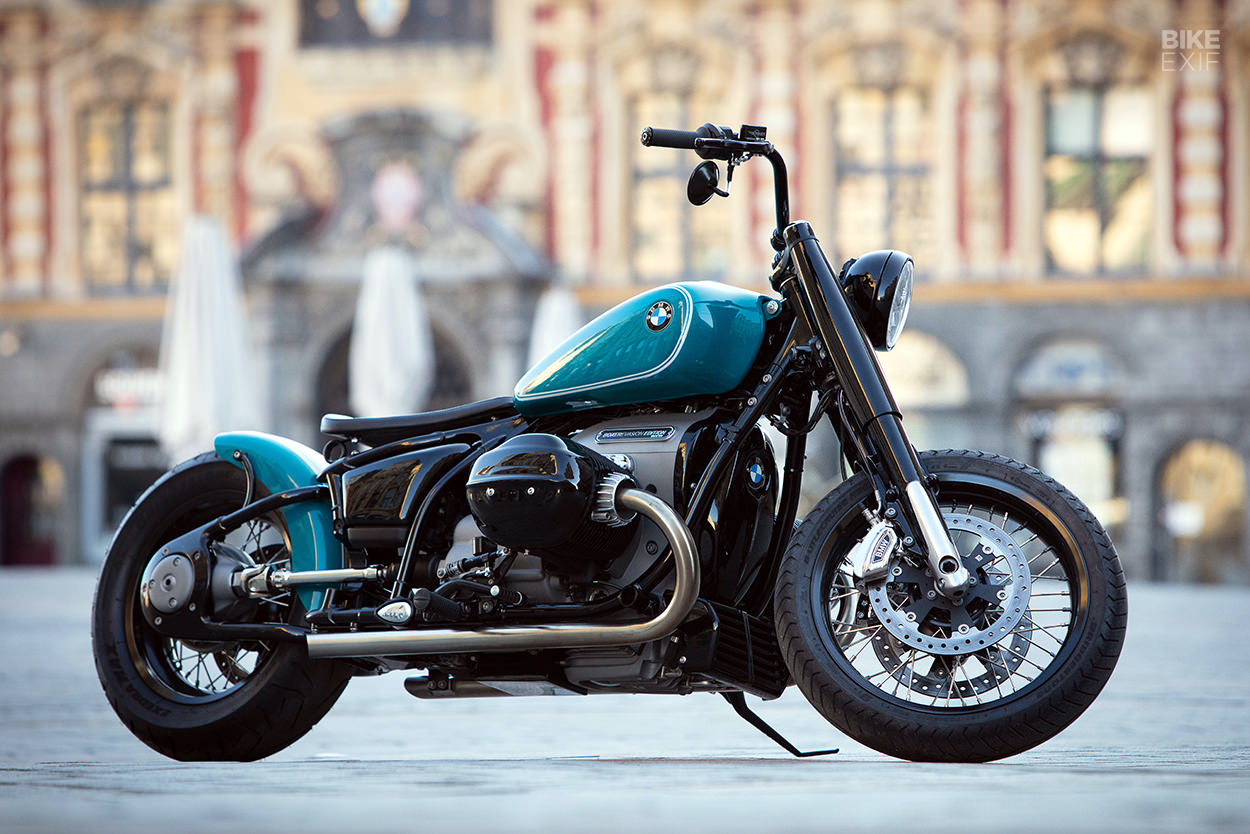 BMW R18 by Boxer Evasion BMW say that the R18 was designed with customization in mind. And given the rate at which R18 customs have been coming out of the woodwork, they weren’t kidding. This suave R18 bobber is yet more proof that a few well-judged tweaks are all it takes to unleash the German-made cruiser’s potential.

This one’s the work of Boxer Evasion—a BMW dealer in Lille run by three brothers who clearly have a head for customization. They’ve slimmed the R18 down with a tight and short rear fender, and a svelte bobber seat that’s sitting on springs. The OEM fuel tank’s still in play, but the front fenders gone; the remaining bodywork wears a modish teal paint job. 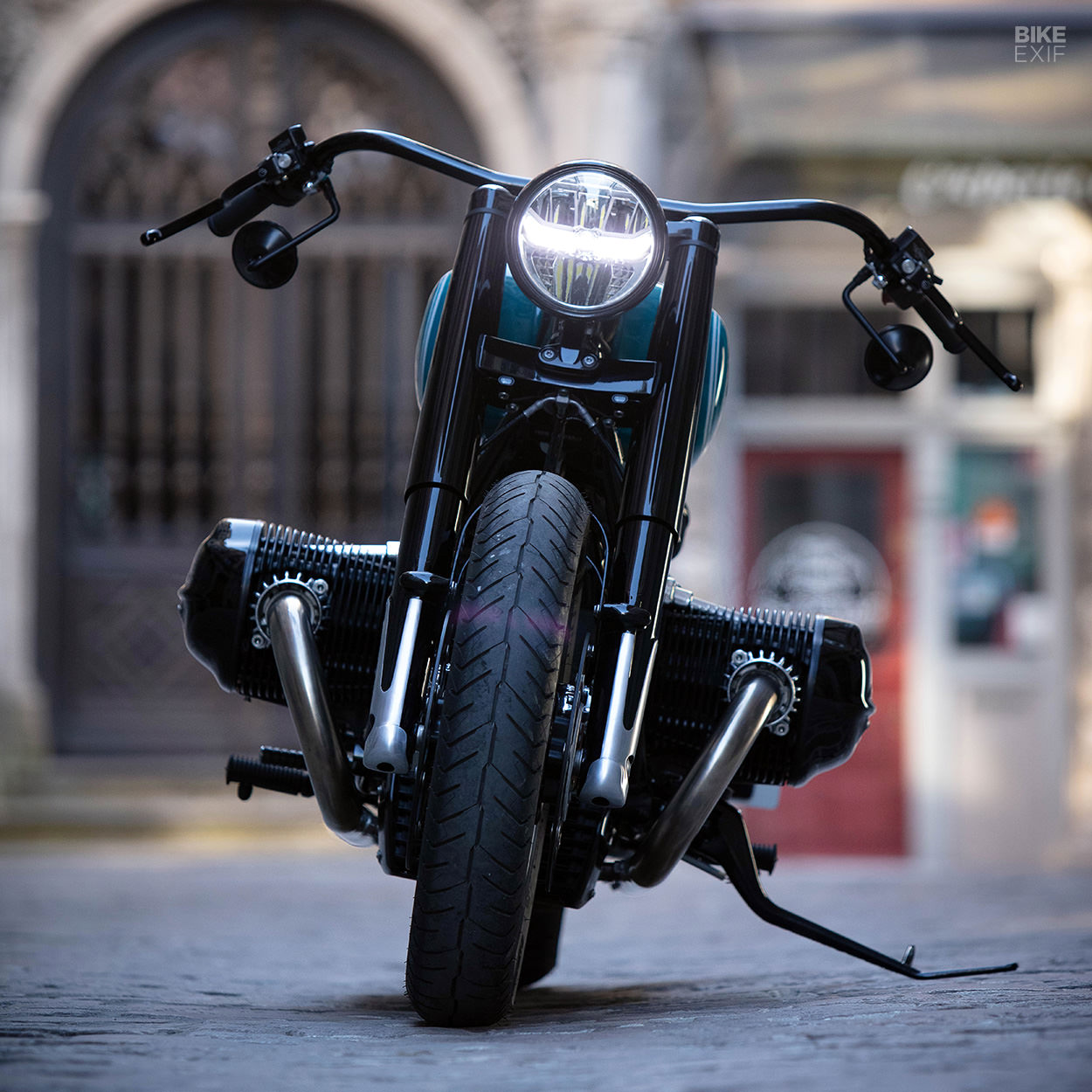 The cockpit’s sporting a set of wide beach bars with all of the wiring (and hoses) rerouted to inside them. The wiring harness is still original, so as not to mess with the bike’s electronics, but the speedo’s been relocated to the side of the bike. And the battery’s been swapped for a lighter lithium-ion unit, housed in a custom box mounted behind the transmission. 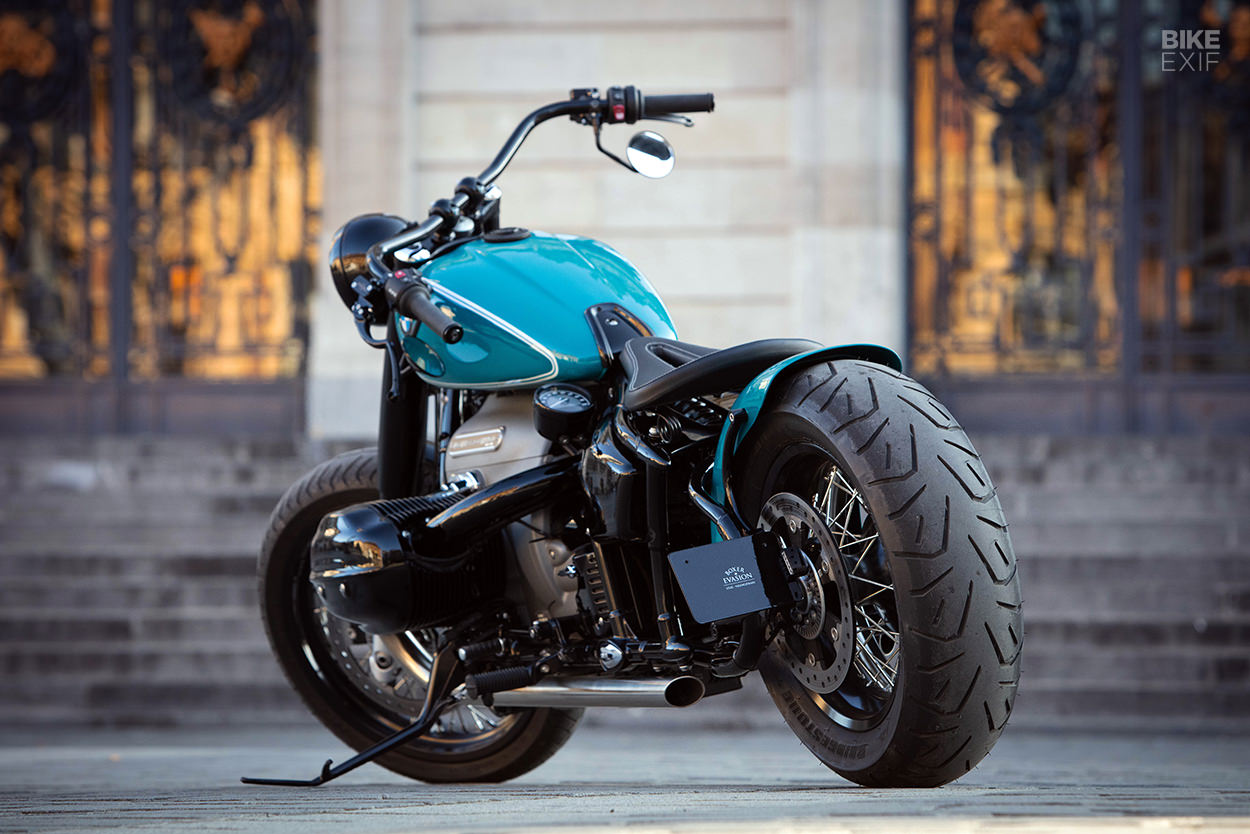 Subtler details include Beringer brake and clutch controls, and Kellermann LED taillights mounted inside the rear fender arch. Lower down is a pair of custom-made slash-cut stainless steel exhausts, complete with removable dB killers. And just above those are custom intakes to replace the stock airbox.

Finished off with a wider rear tire and a side-mounted license plate bracket, Boxer Evasion’s bobber is a worthy addition to the ever-growing list of R18 customs. [Boxer Evasion | Images by Gaëtan Lamarque] 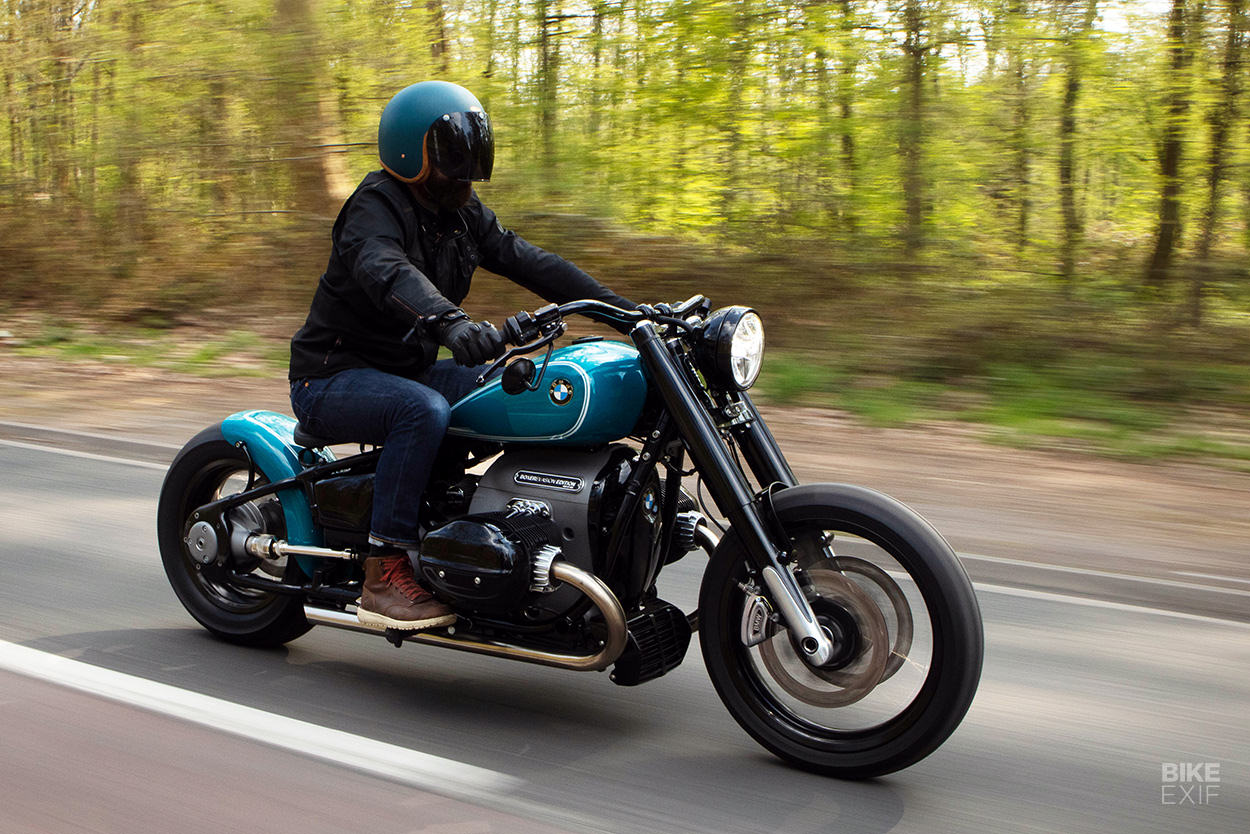