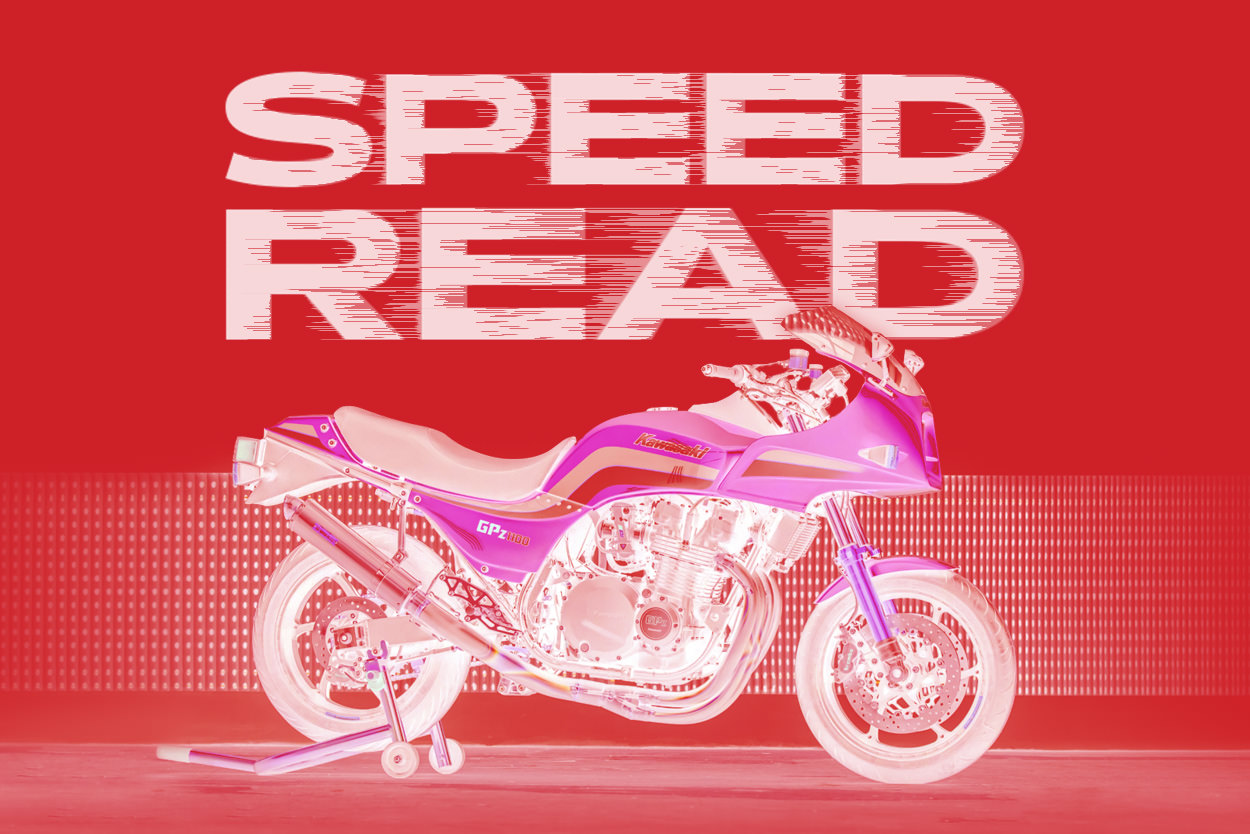 If you’re a fan of Japanese inline fours, this is your week. We’ve lined up Kawasaki GPz1100 and Kawasaki KZ1000 restomods, and a Honda CB750 cafe racer. Then we go in the opposite direction, with a look at Harley-Davidson’s new Pan America adventure tourer. 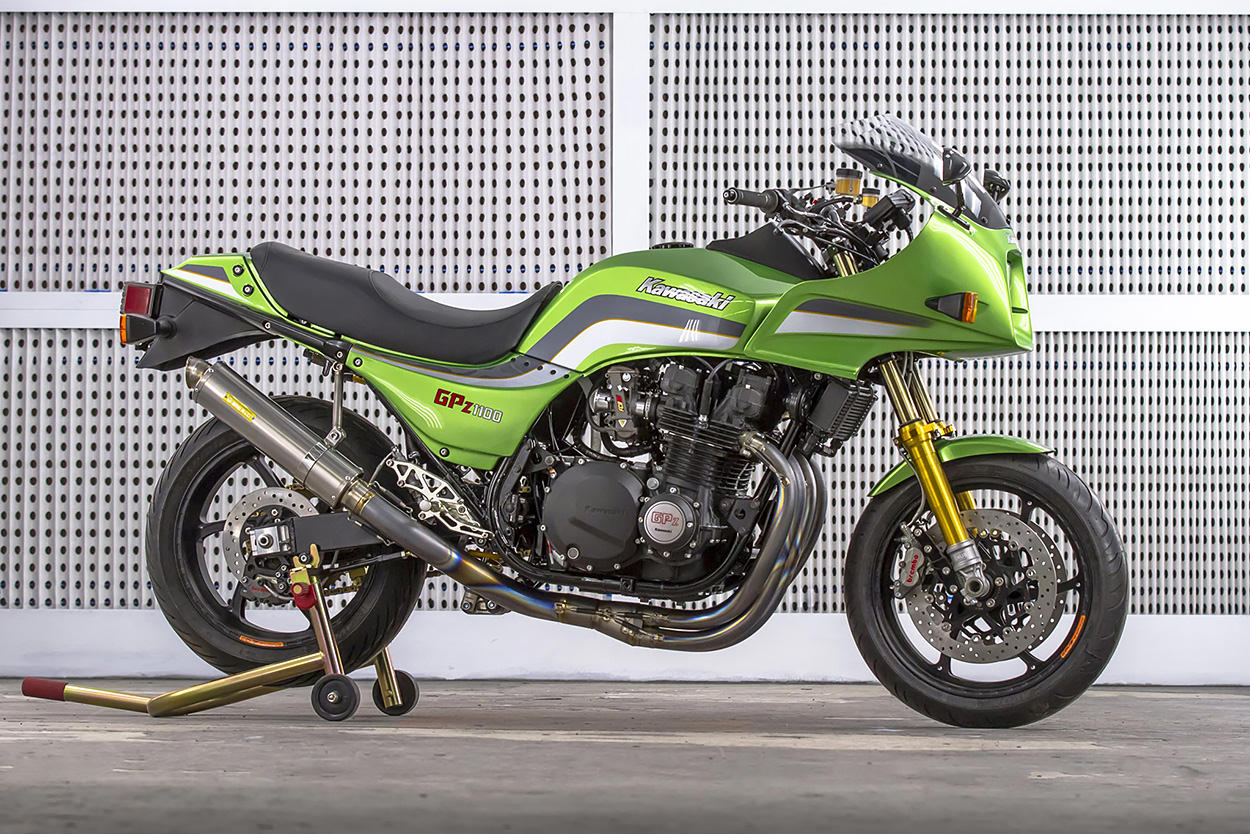 Kawasaki GPz1100 by dB Customs The 80s was a fantastic era for superbike development. Bikes were simultaneously shedding the UJM styling of the 70s, and getting faster—and the GPz1100 epitomizes that, making it ripe for the restomod treatment.

This wild GPz comes from Darren Begg at dB Customs in Canada, who has a thing for throwing performance upgrades at 80s bangers. This project was no different, and features everything from an engine rebuild to new suspension components. 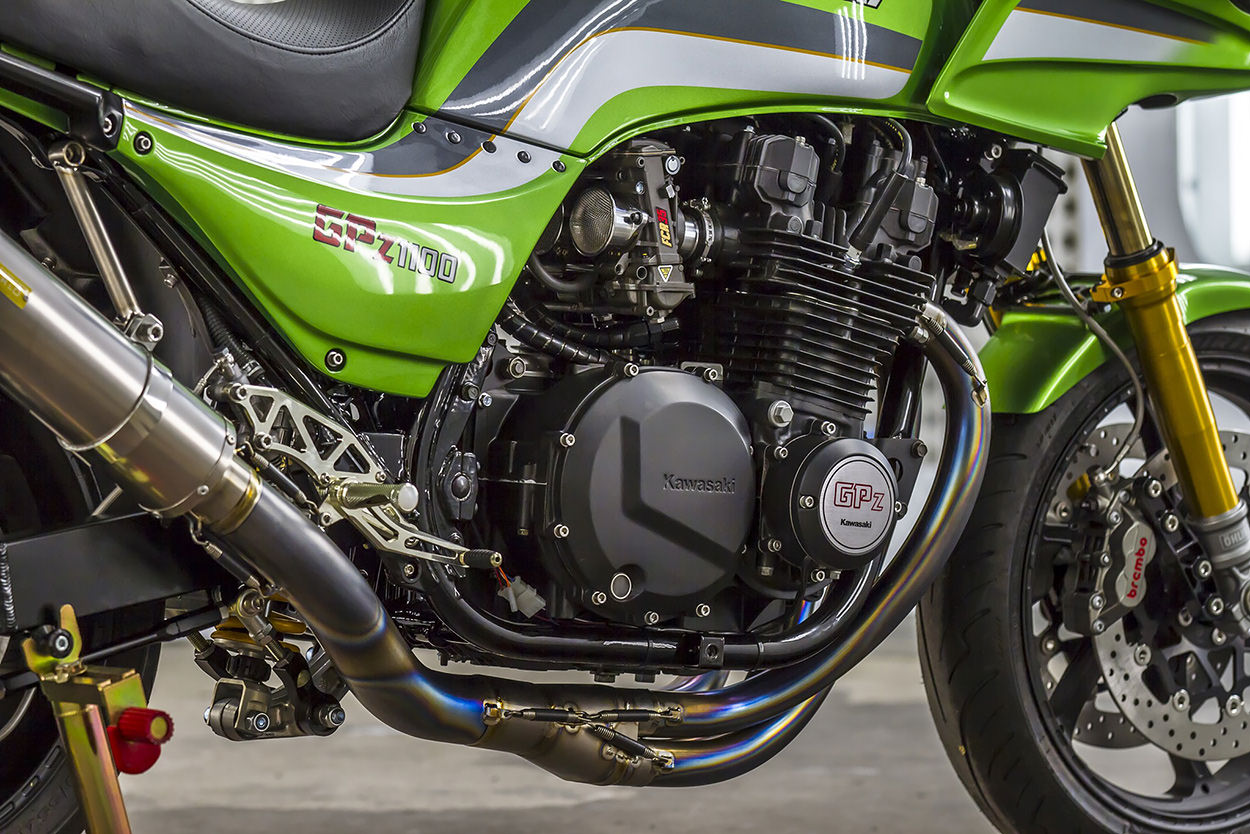 Inside the motor you’ll find a set of 1,170 cc forged Wiseco pistons with upgraded cams. The carbs are 35 mm Keihin FCRs from JB-Power, and the exhaust is a hand-bent four-into-one titanium unit. The clutch has been converted to a hydraulic system, with Spiegler clutch and brake lines throughout.

Moving to the running gear, Darren modified a Suzuki GSX-R600 swingarm to work with the Kawasaki, then installed Öhlins suspension components at both ends. The wheels are forged aluminum items from OZ Racing, and the brakes are from Brembo. 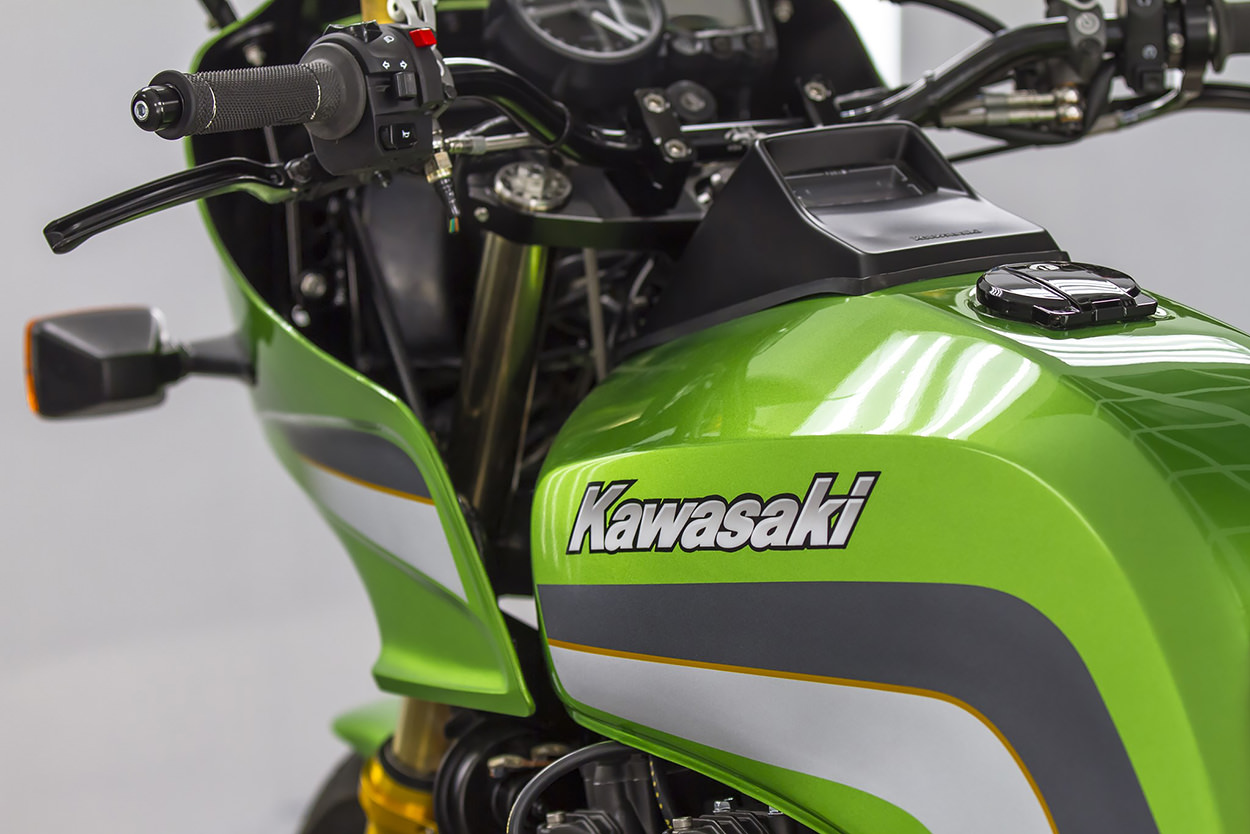 The bodywork and graphics are still period correct, with Sketch’s Ink responsible for the paint and Cerakote work, and not a single vinyl decal in sight.

From the billet aluminum rear-set brackets to the subtle tweaks to the cockpit, almost every inch of this retro-fabulous Kawasaki’s been tweaked to perfection [Via] 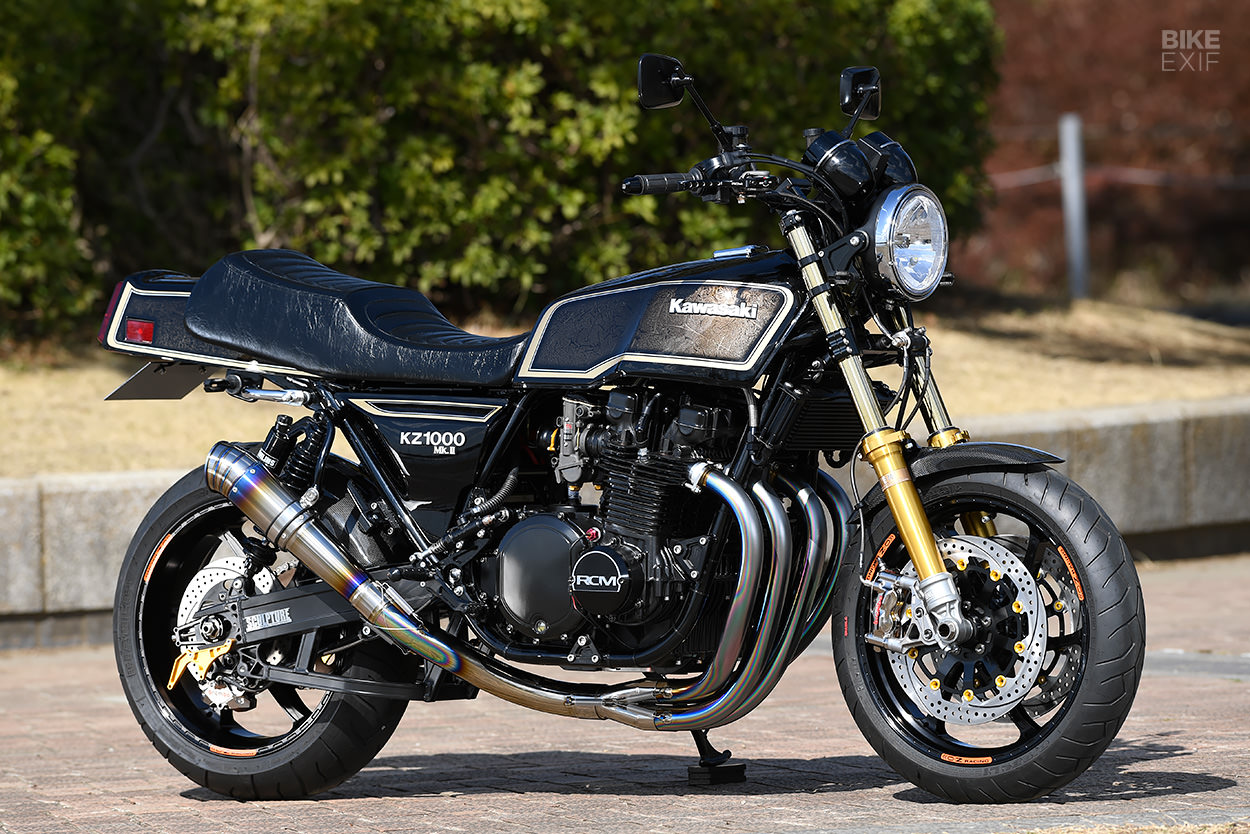 We’ve done our best to scalp information from AC Sanctuary’s Japanese website, but our favorite part is where they praise their client’s taste, because he opted for a complete overhaul rather than a ‘bolt-on’ custom. So as you’d imagine, the work here was extensive—starting with an engine rebuild and capacity bump. 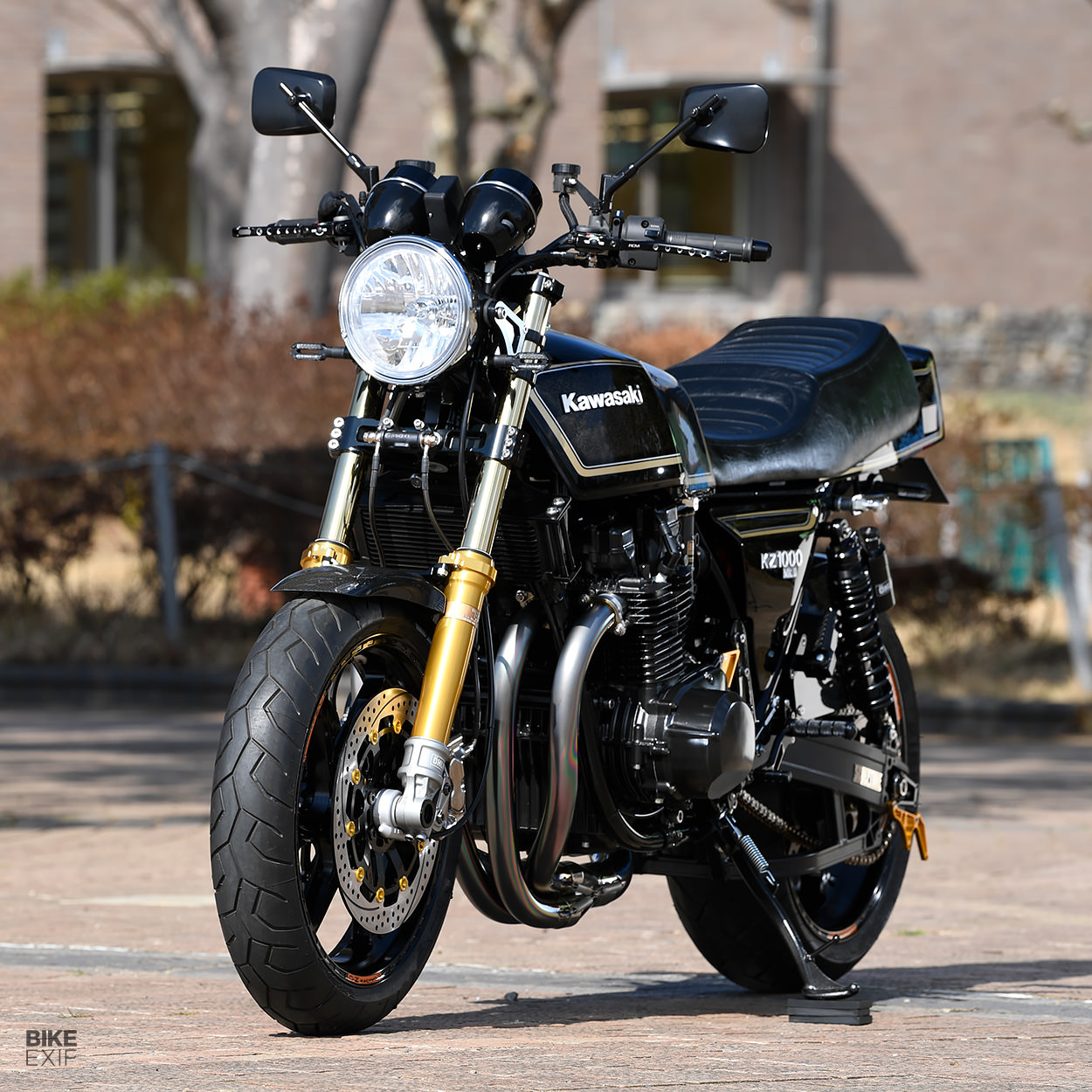 AC Sanctuary also rebuilt the crank shaft, changed the cams, and installed a high performance oil pump. The engine breathes in through a set of Yoshimura Keihin carbs with velocity stacks, and out via a hand-bent four-into-one titanium exhaust system from Nitro Racing.

Just like the dB Customs Kawa, this KZ’s sporting Öhlins suspension, OZ Racing wheels and Brembo brakes, along with a custom aluminum swingarm and a carbon fiber rear hugger. 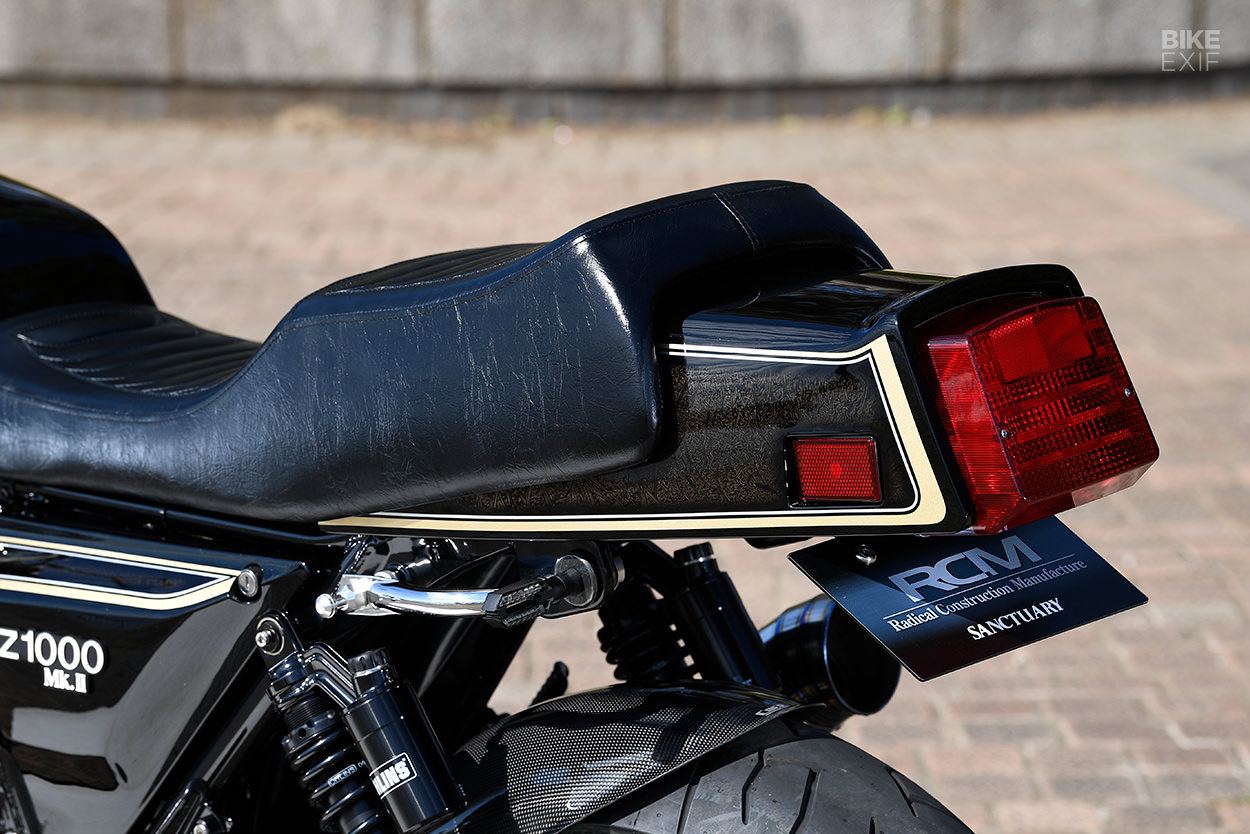 Fans of old school superbikes will appreciate that AC Sanctuary have kept the KZ’s signature ducktail rear end in play, but the seat unit itself is actually a modern (and improved) replica part. Twin clocks and a big ol’ round headlight drive home the retro feel, and the bike’s finished off with a sublime black livery, with double pin stripes and textured inlays. [More] 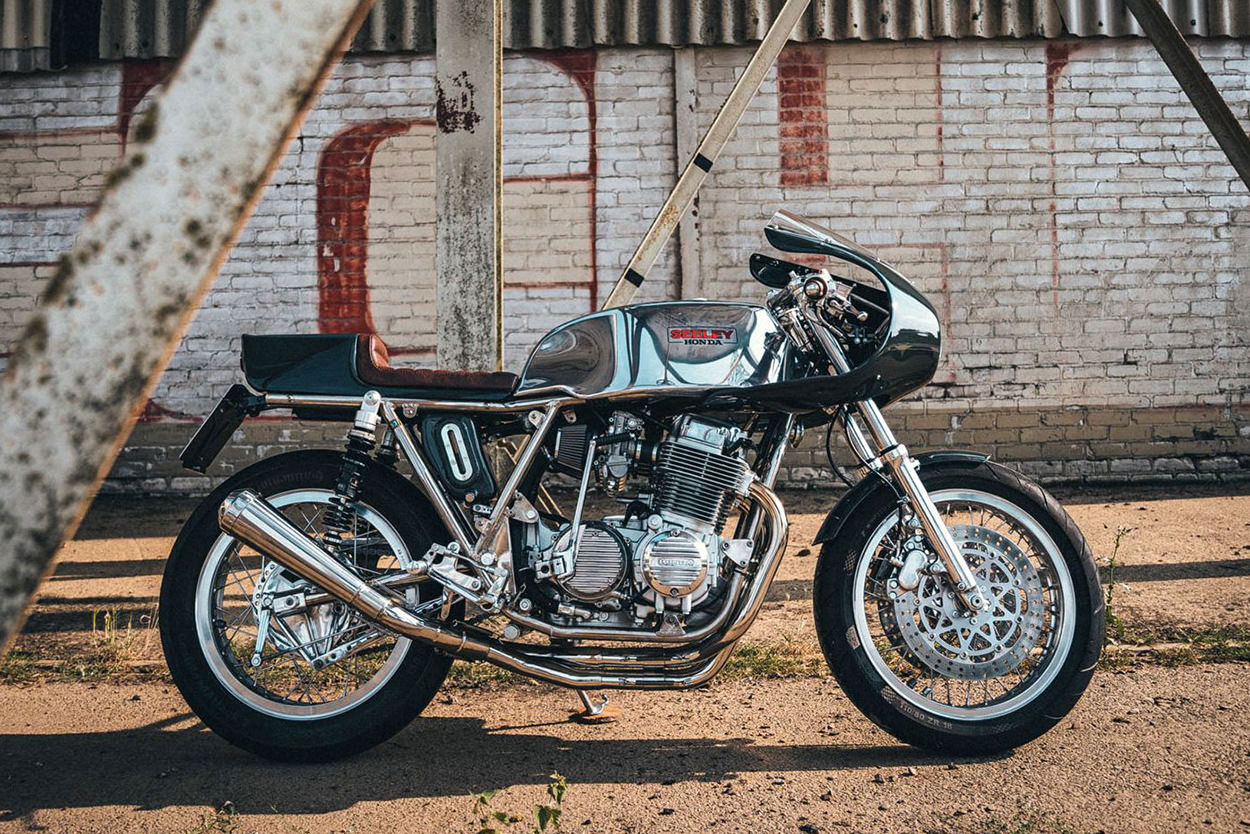 Seeley Honda CB750 by René Tollkühn Herr Tollkühn probably knows more about historic cafe racers than most people—he’s the founder of the German website Cafe Racer Forum, which boasts 20,000 registered users. Building and amassing road and track motorcycles is his hobby of choice, and judging by this well-judged Seeley-framed cafe racer, he’s no hack.

“This bike is one of only 302 Seeley Hondas based on the CB750 Four from 1977,” says René. “Before retiring into historic racing, Colin Seeley built a series of frames for the Honda CB750 SOHC/4. Unlike its English competitors Dresda, Spondon, Rickman and Harris, the Seeley frame was designed in such a way that it could accept most of the other CB750 components along with the engine, which simplified the conversion process.” 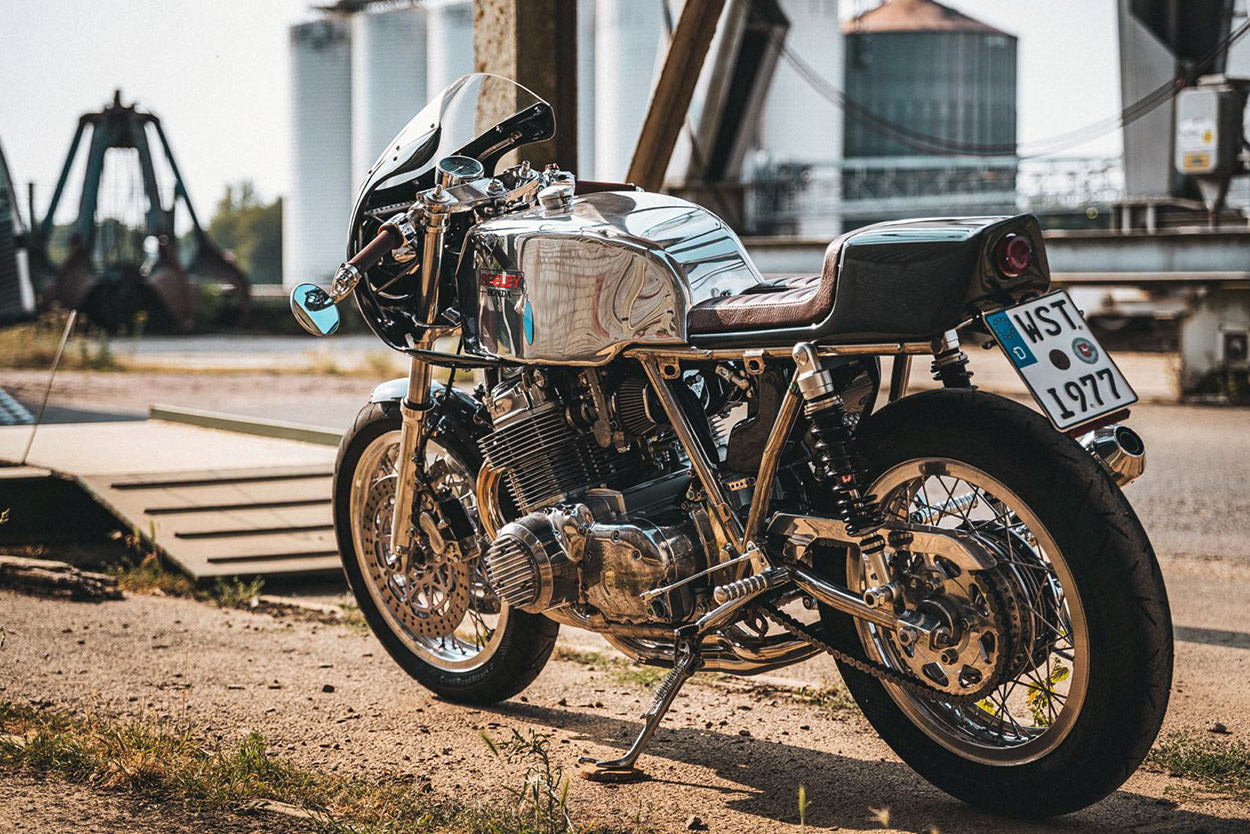 René originally picked up this particular example in a shoddy state from a seller in Austria. Then he spent four years rebuilding it into a road-going cafe racer that would suit his taste, while also converting a second Seeley CB for track use.

All that remains of the donor bike now is its stunning nickel-plated double-loop Reynolds 531 chromoly frame, and the Honda engine block, wheel hubs and switchgear. But even those have been optimized and tuned, with a set of flat-slide carbs and a Schüle manifold system to boost performance. 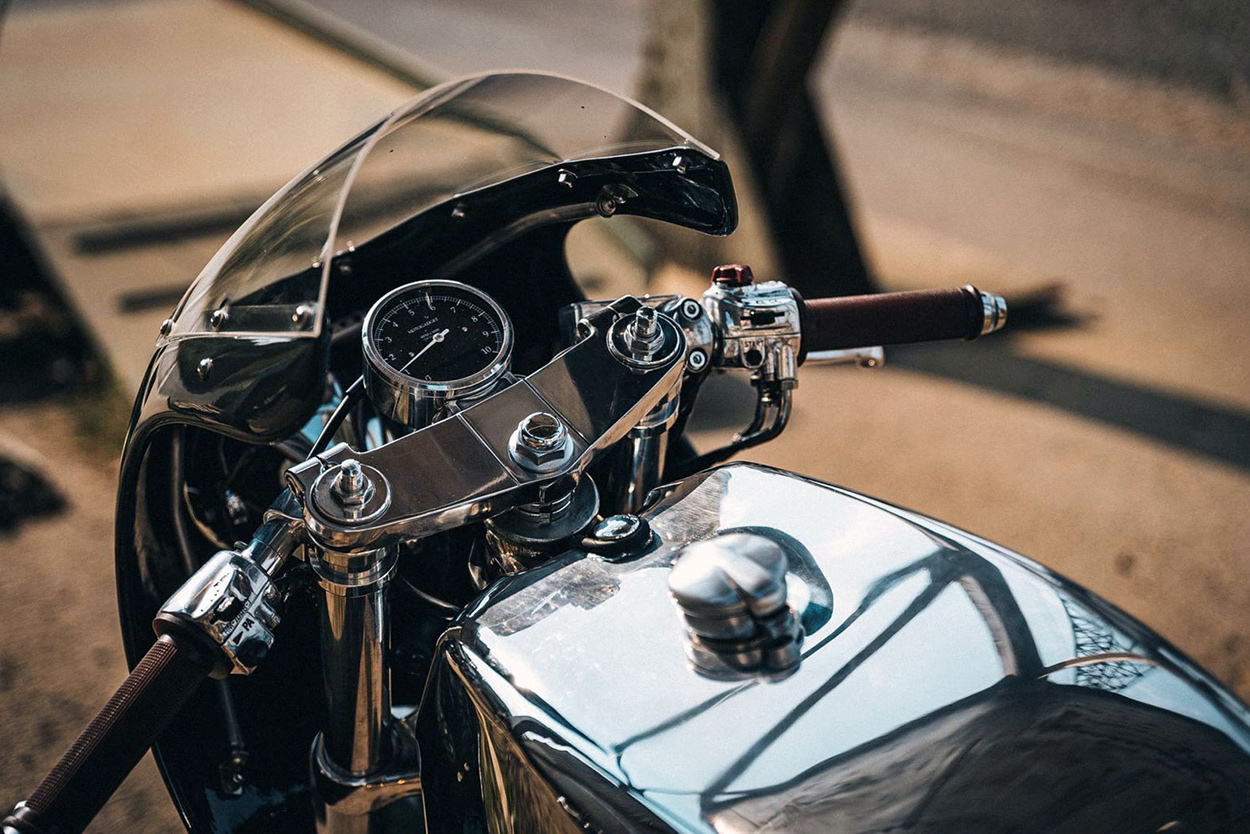 The fairing and tail section are both custom aluminum pieces, along with the new oil tank. The front end’s from a 1988 Yamaha Fazer, the wheels rims are high-shoulder aluminum items on the OEM Honda hubs, and the tires are Continental Road Attack 2s. From the new foot and hand controls, to the smattering of Motogadget bits and the impeccable finishes, this customized classic is as tidy as it is unique. [More] 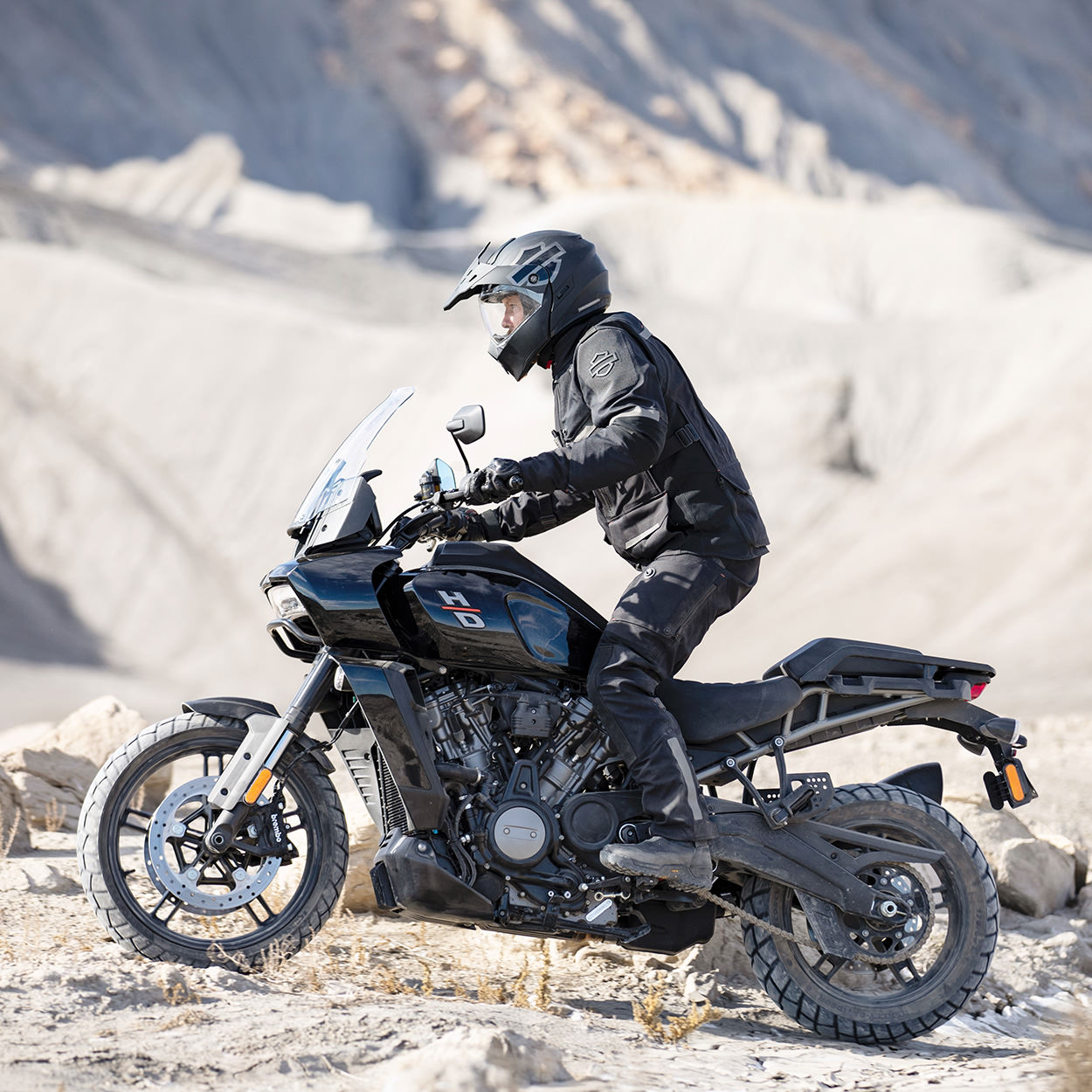 Get past the Pan America’s polarizing looks (I love it, Chris doesn’t), and you’ll find a purpose-built adventure tourer with a 150 hp and 127 Nm motor, and a wet weight of 534 lbs. With a starting price of $17,319 for the base model, it’s a hair cheaper than a base model BMW R1250GS—but with comparable numbers. 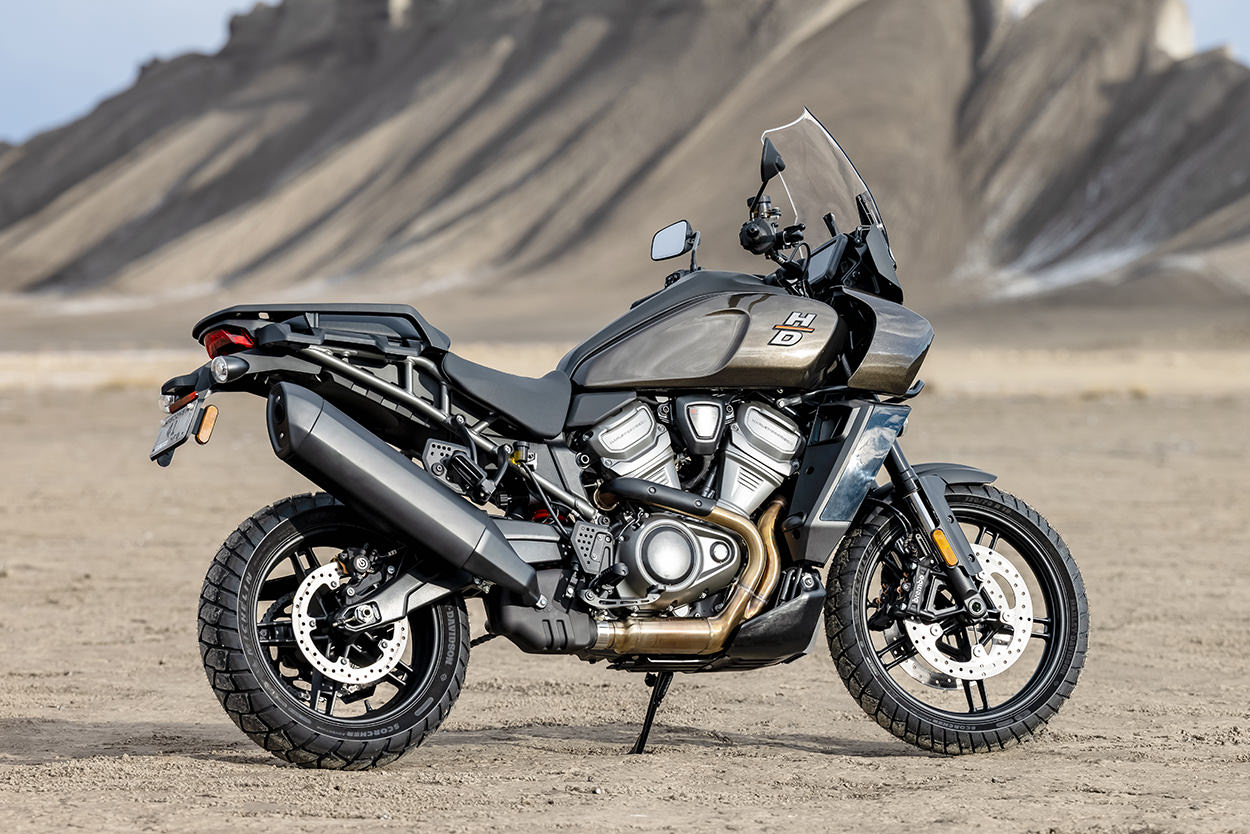 A quick rundown of the Pan America’s spec sheet shows a three-piece chassis that uses the motor as a stressed member, an aluminum swingarm, and 19F/17R alloy wheels. (Spoked tubeless wheels are available as a factory option.) There’s full adjustable Showa suspension at both ends with 190 mm of travel, and Brembo brakes, too.

The Pan America also gets a TFT display, plus a full host of electronic rider aids. Multiple rider modes come standard, some of which can be customized. 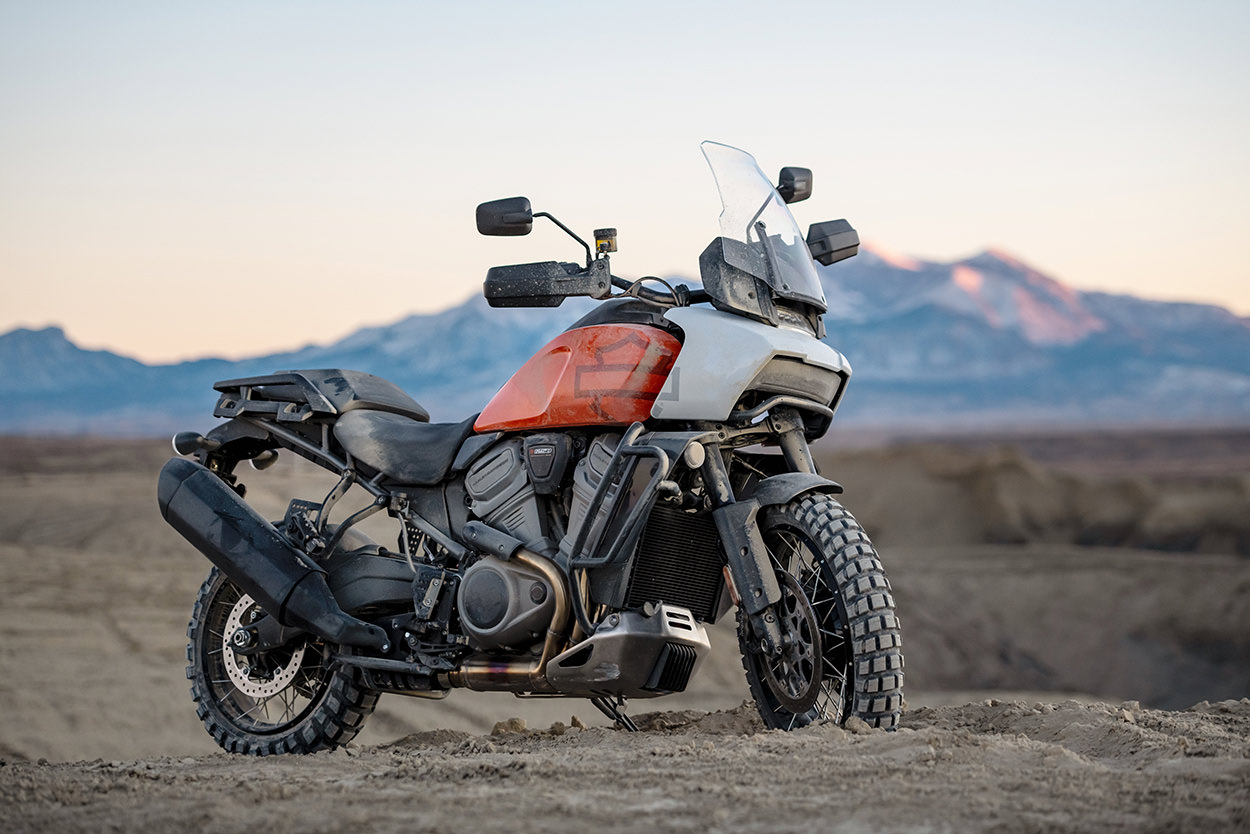 The Pan America 1250 Special [above] is an upgraded model that costs a stack more ($19,999), but includes a host of extras. The most notable is an electronically controlled semi-active suspension system, that adjusts the damping on the fly according to the road surface. And there’s an optional ‘Adaptive Ride Height’ system too, that lowers the bike at standstill to make it easier to get your feet down.

But the real story here, is that the new chassis and motor are a huge departure from what H-D have done up until now. 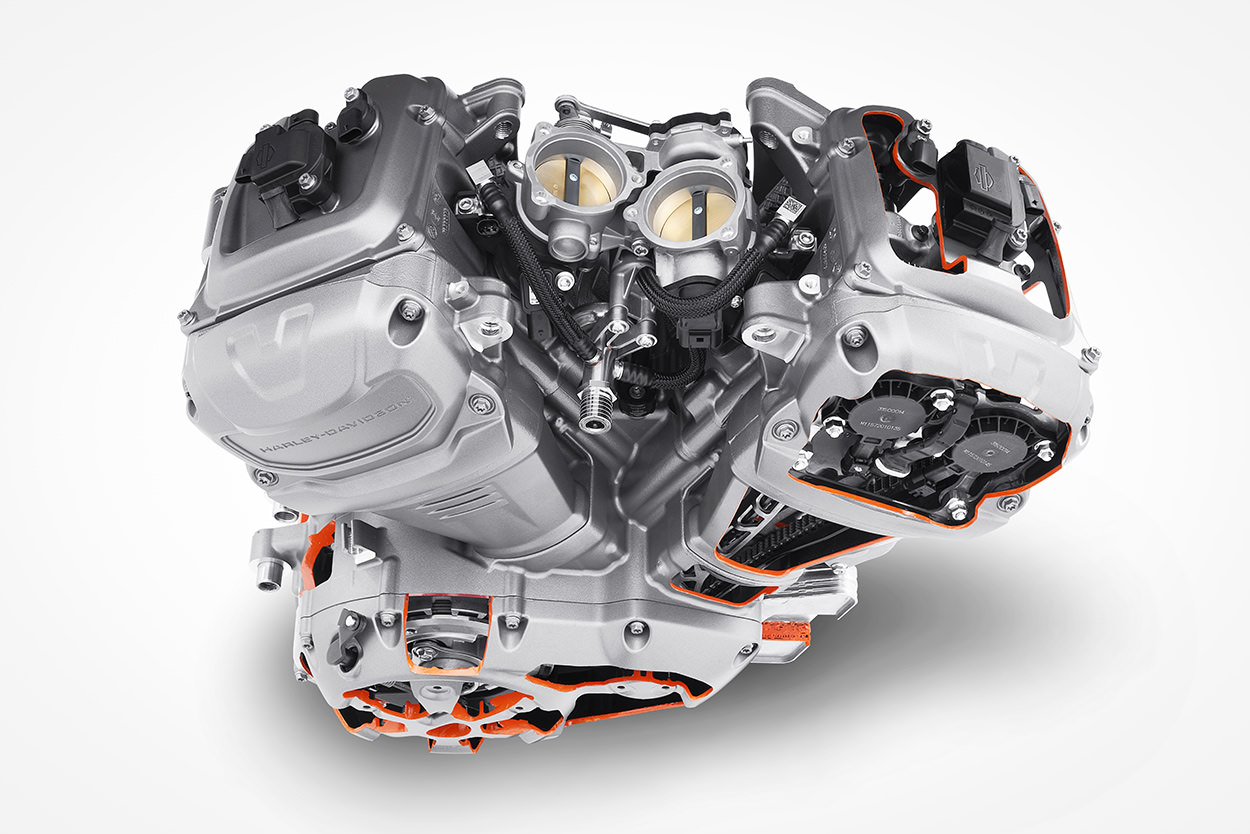 The liquid-cooled 1,250 cc ‘Revolution Max’ V-twin [above] makes more horsepower than you’d expect from a Harley, and peak torque hits much higher than usual (at 9,500 rpm). And it features a downdraught intake system too, with a traditional airbox up top instead of the side-mounted intakes we’re used to seeing on Harleys.

H-D previously teased that this new platform would be used for multiple future models in varying capacities, and that’s what has us excited. 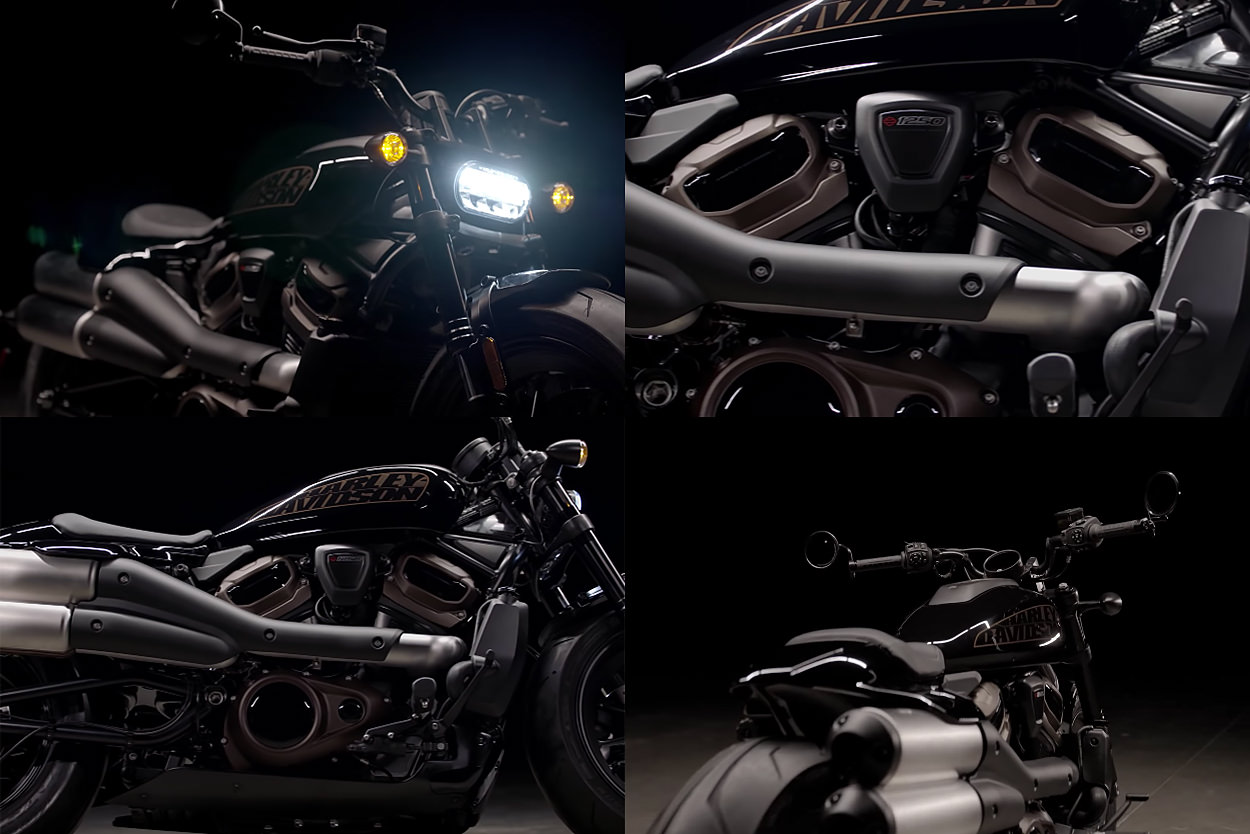 It doesn’t sound like we’ll be getting the 950 cc Bronx streetfighter any time soon, but Harley’s Pan America reveal video teased a first look at the upcoming 1250 Custom [screenshots above]. Not only does it look good, but given that Harley have now built a thoroughly modern chassis and motor, it’s sure to be a goer too.

In the meantime, we’re looking forward to riding the Pan America—so that we can find out if it’s as capable in the real world as it looks. [Harley-Davidson Pan America] 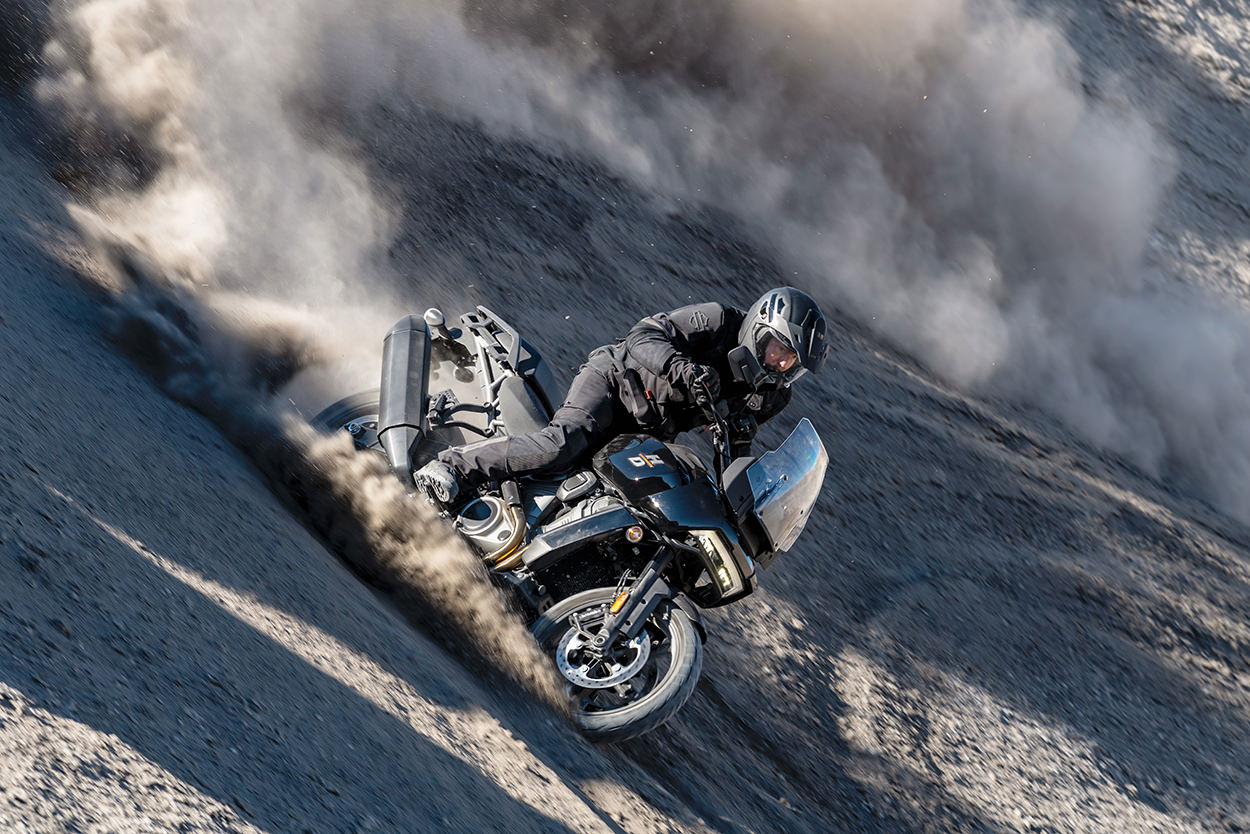