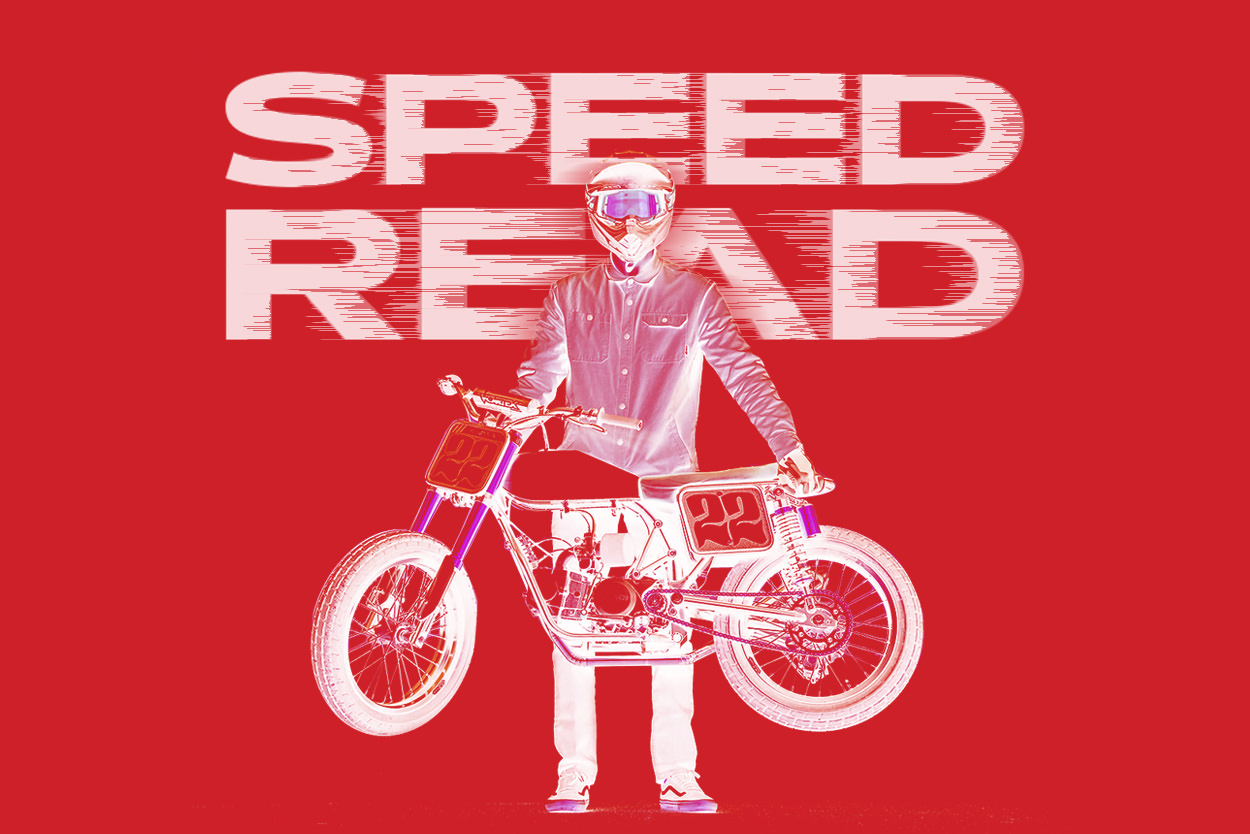 This week’s custom motorcycles come in all shapes and sizes—from a pint-sized flat tracker, to a stylish BMW R18. Plus we take a look at a tidy BSA bobber, and a Norton Atlas with a Harley-Davidson WLA motor. 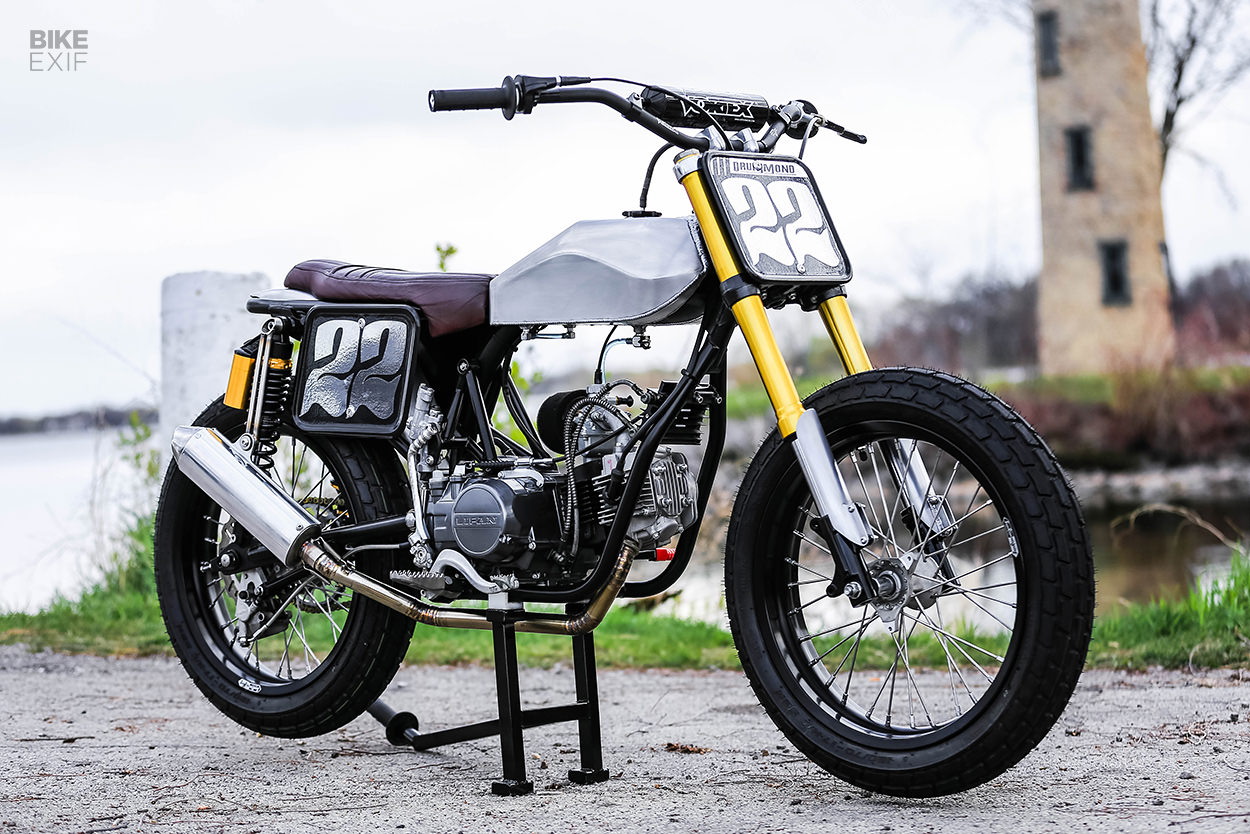 Jake Drummond’s Mini Tracker Jake Drummond has some rather crazy skills, but for his latest project, he went small, cheap and cheerful. This mini flat tracker took him three months to build and cost just $1,800, but it’s just as cool as any bike twice its size.

Jake started with a 1968 Yamaha YCS1 rolling chassis he found on Facebook, then sourced a four-speed 140 cc Lifan motor off eBay. Then he built a custom motor cradle, mounts, and a new rear loop to bring it all together. 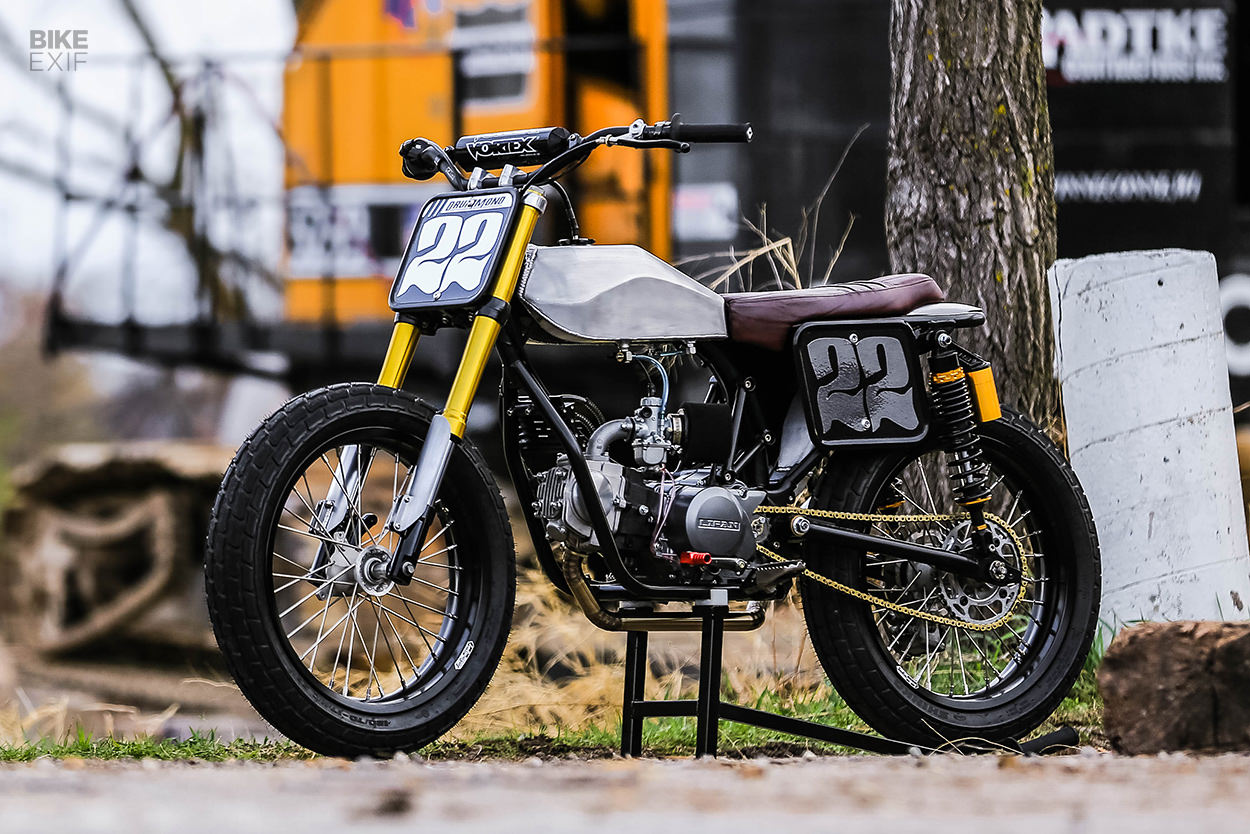 The front forks are Honda Grom units, and the rear shocks are generic aftermarket items. The wheels are 17” Sun rims, laced to Suzuki RM85 hubs with Buchanan’s spokes, and wrapped in Shinko rubber. And the rear brake is from a 2010 Yamaha YZ250F, with a custom caliper bracket and pedal linkage.

Jake also added a custom aluminum Champion-style gas tank, with an aluminum rear fender and aluminum fork guards. The pleated leather seat is custom too, as are the vacuum-formed number plates. 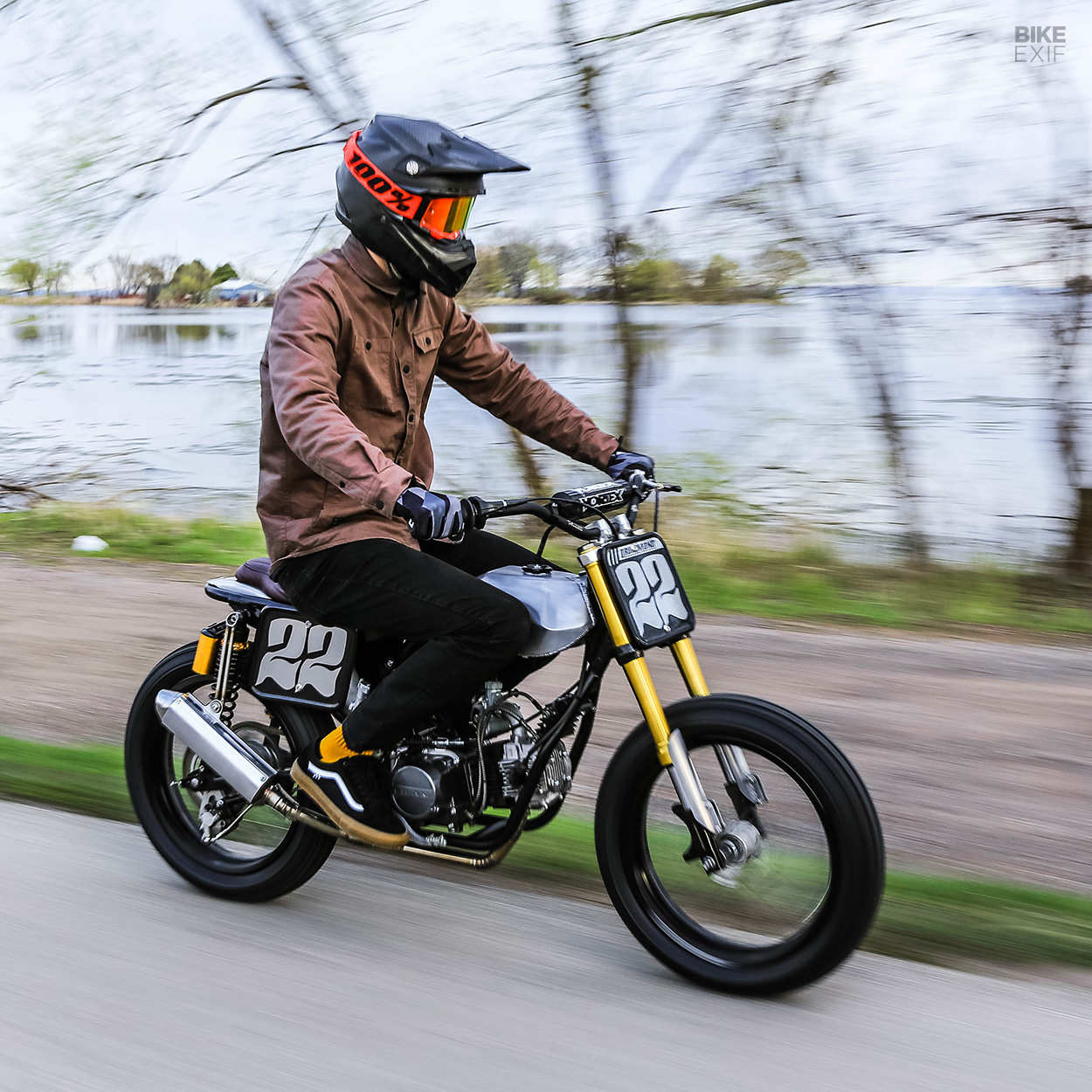 Up in the cockpit are Vortex handlebars with a BBR throttle and ODI grips. Lower down are the titanium foot pegs from a Suzuki RMZ450.

Jake’s mini-tracker looks cute as a button, and should be wild fun to ride. Let’s hope he races it too—because there’s actually a flat track class for it. [Jake Drummond Instagram | Images by Zach Visser] 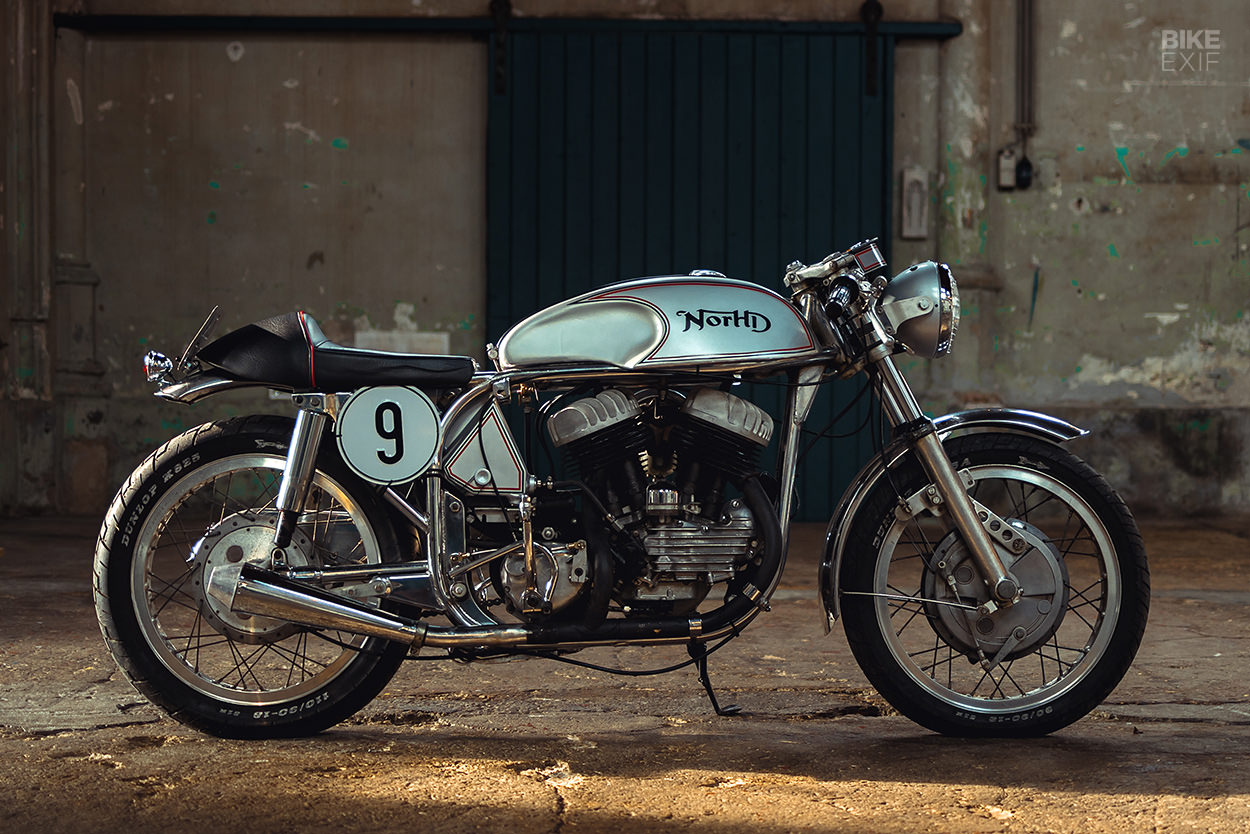 Makai Wink’s NorHD 20-year-old Dutchman Makai Wink grew up with his grandparents and parents riding motorcycles, so getting onto two wheels himself was inevitable. His first major project is a doozy: a 1942 Harley-Davidson WLA Liberator motor stuck into a 1967 Norton Atlas frame. And best of all, it was a family project.

Makai’s dad and granddad have been collecting bike parts since they were young, so many of the parts were simply dragged out of the garage. 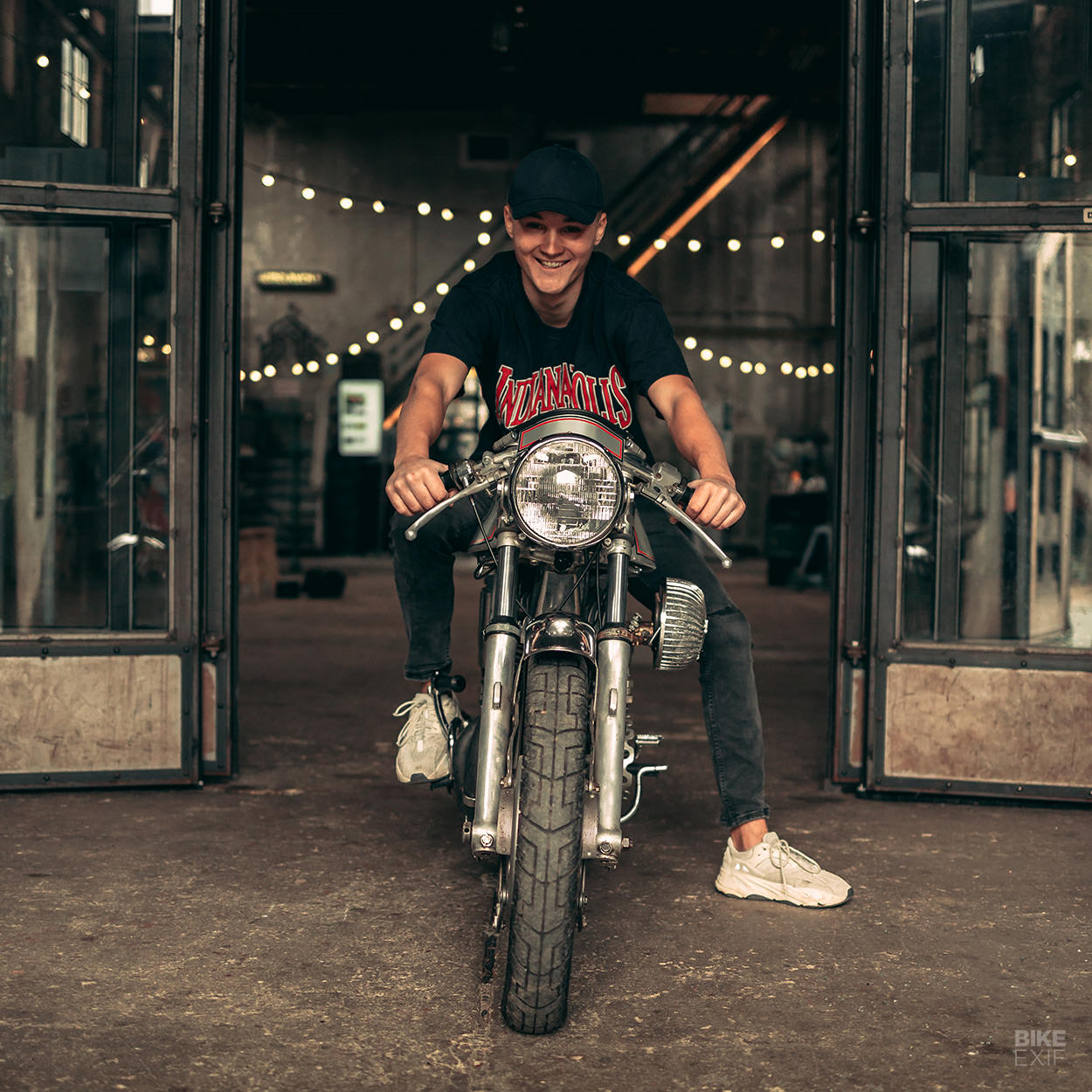 “We actually call the bike ‘SO’,” says Makai. “It stands for schuur opruiming, sloop onderdelen, which translates to ‘barn clearance, demolition parts’.” But despite it’s bitsa nature, it looks like a million bucks.

The project actually kicked off when Makai was 15. His granddad was selling his house, and found the Harley motor while cleaning out the garage. Makai came up with the idea of sticking it in an Atlas frame—and spent the next winter making that happen. He bought the motor and frame combo off his granddad, and carried on the project with continuous help from both his granddad and his father. 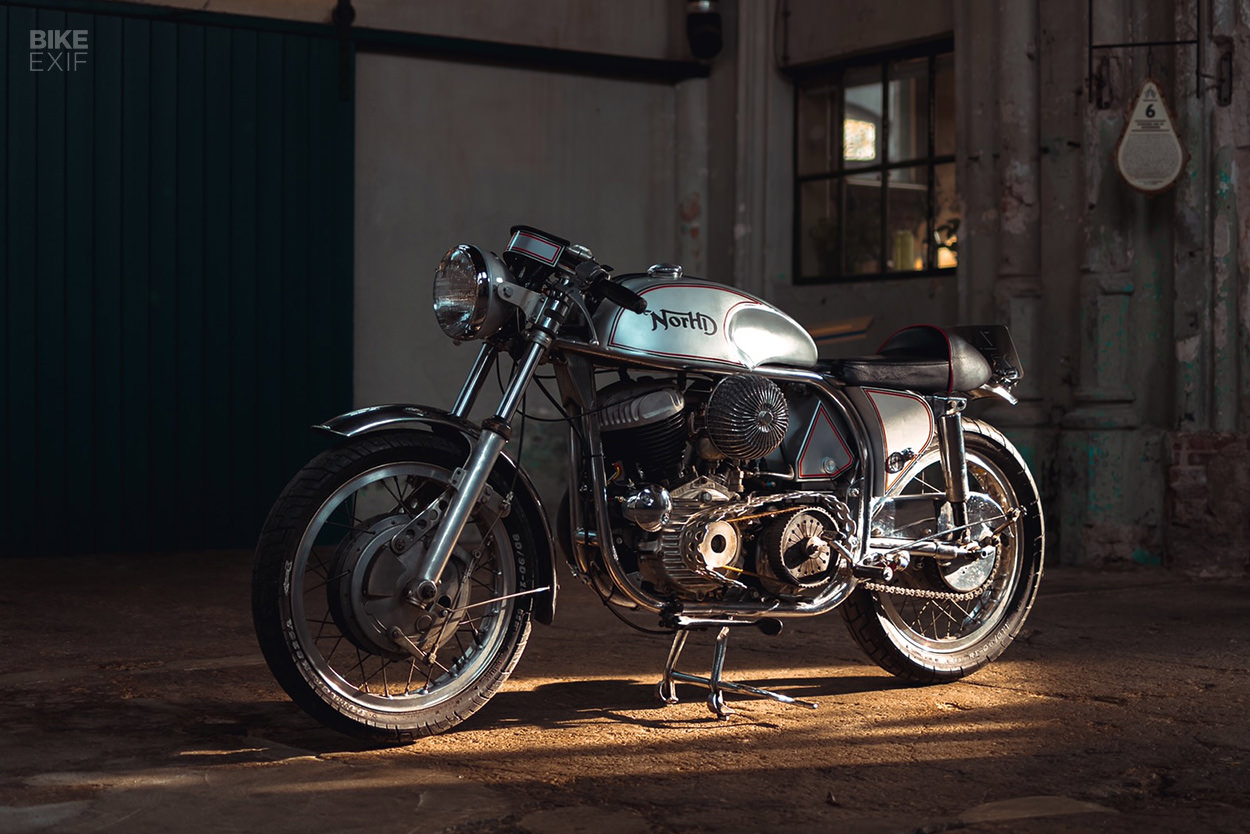 The motor consists of a modified Liberator block, with 1200 inlet valves and KR750 exhaust valves, a 1200 carb, and a balanced crankshaft. There’s a custom pulley system mating the engine to the gearbox.

Makai’s dad helped with the electrics, which were definitely not a walk in the park. “You could throw away the scheme for the wiring harness,” says Makai, “because it’s an American engine in an English bike. And for the English bike it’s a ‘+’ on the frame, and for an American bike it’s a ‘–‘ … we call it ‘swearing in church’.” 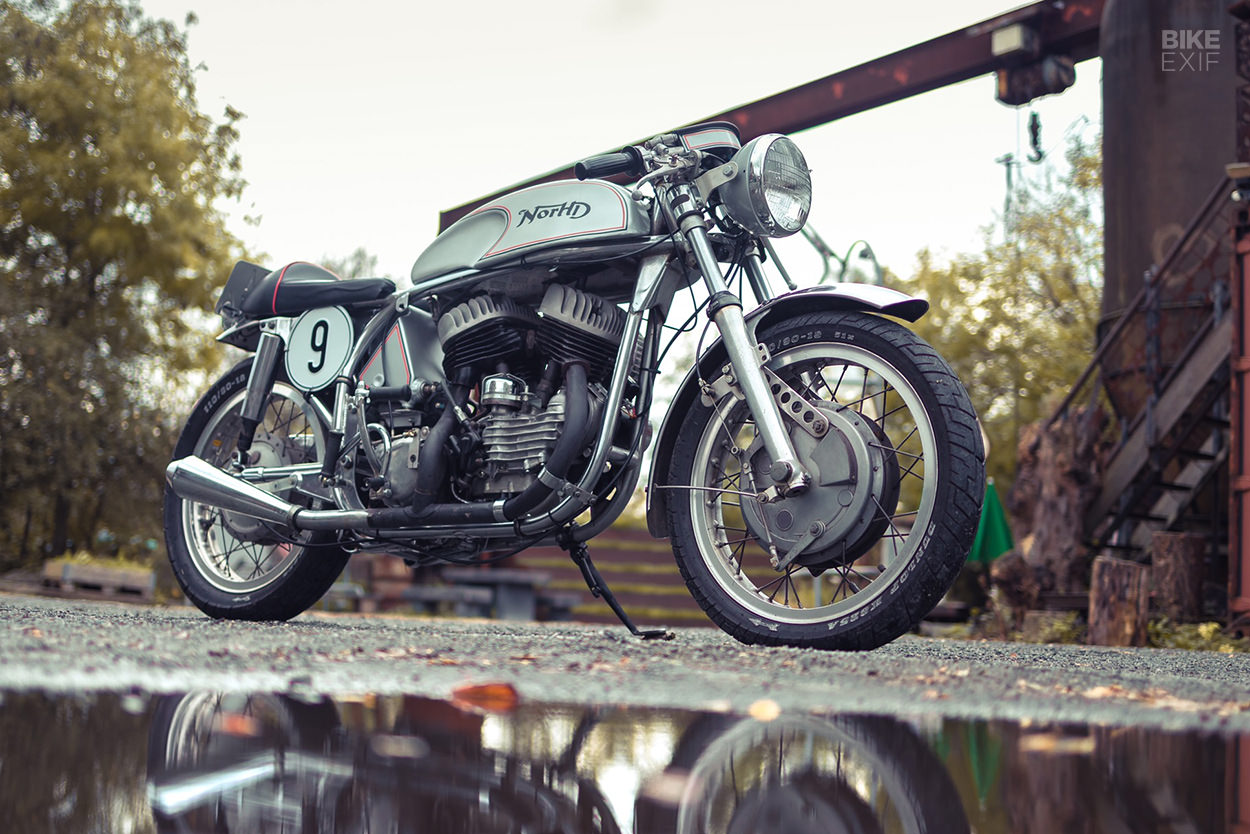 Other features include original Norton drum brakes, a restored Smiths clock, and a custom dashboard and battery box. Makai did all the paint and pin-striping himself, redoing some parts four or five times, “because I’m crazy for precision.”

The bike’s finally done, but Makai can’t ride it yet. The Netherlands has a tiered licensing system, and at 20 years old, he’s on his first tier. We bet he can’t wait for that license upgrade. [Makai Wink Instagram | Images by Noortje Blokland] 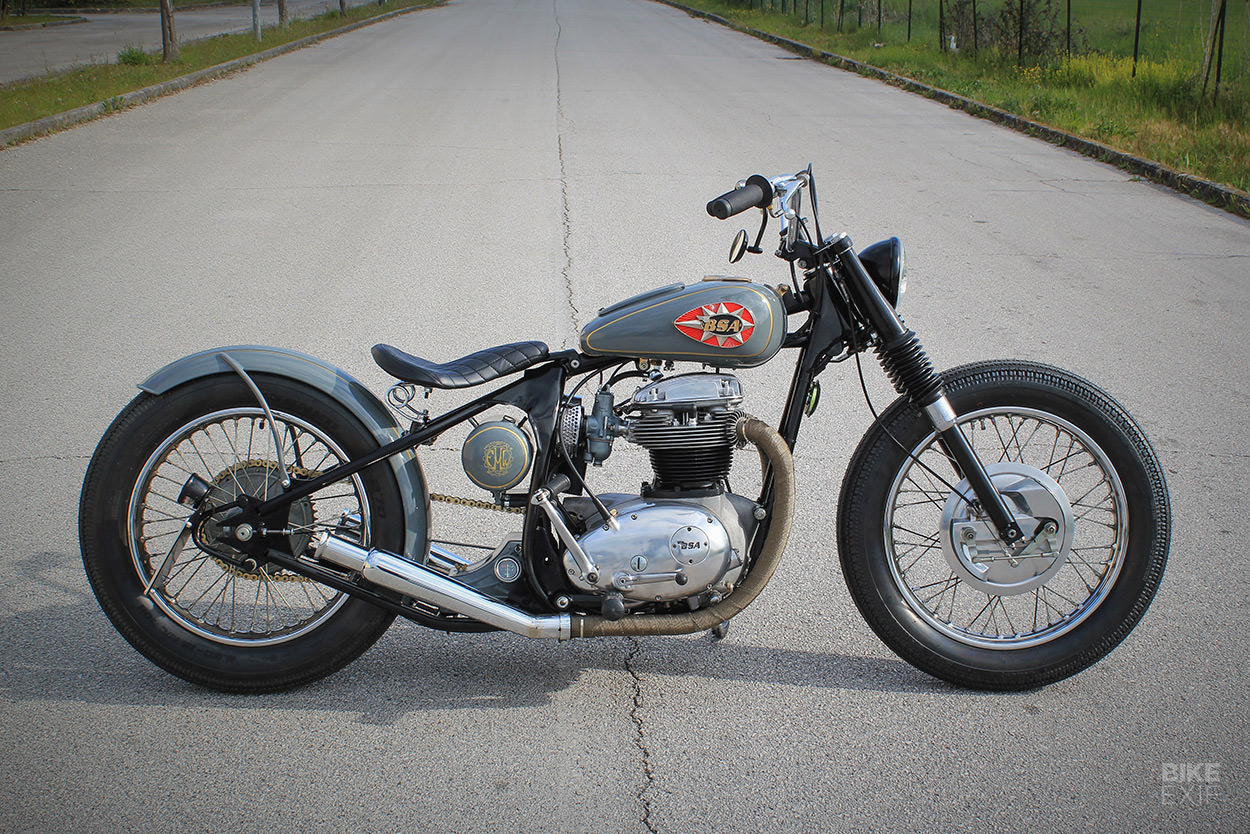 BSA Thunderbolt by FMW Motorcycles Some of the bikes that have rolled out of Lorenzo Fugaroli’s FMW Motorcycles over the years have been pretty ‘out there.’ But the Italian builder also knows how to play the classics—and the evidence is this flawless BSA hardtail. It’s probably because Lorenzo’s craft was handed down to him from his father, who’s been manipulating metal since 1969. 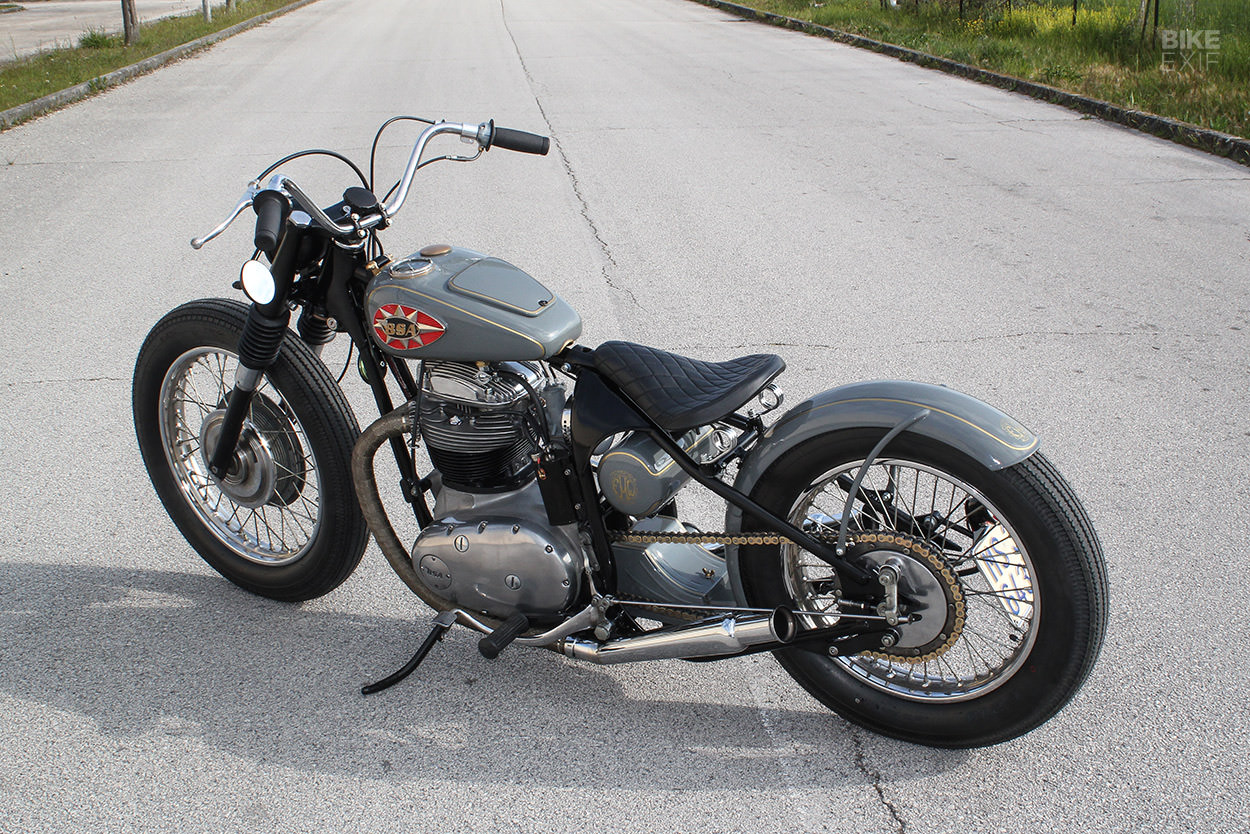 The donor for this project was a 1970-model Thunderbolt A65T, and it was commissioned by a client. Lorenzo’s turned it into a timeless bobber, but he’s also brought it up to date—with tweaks to help it run lead-free fuel. So it’s sporting updated electrics, a Wassel carb and new valve seats.

Lorenzo fabricated the hardtail frame himself, along with smaller details like the aluminum oil tank and battery box. The fuel tank’s been modified with an embedded classic Smiths speedo, and it sits on custom brass supports. 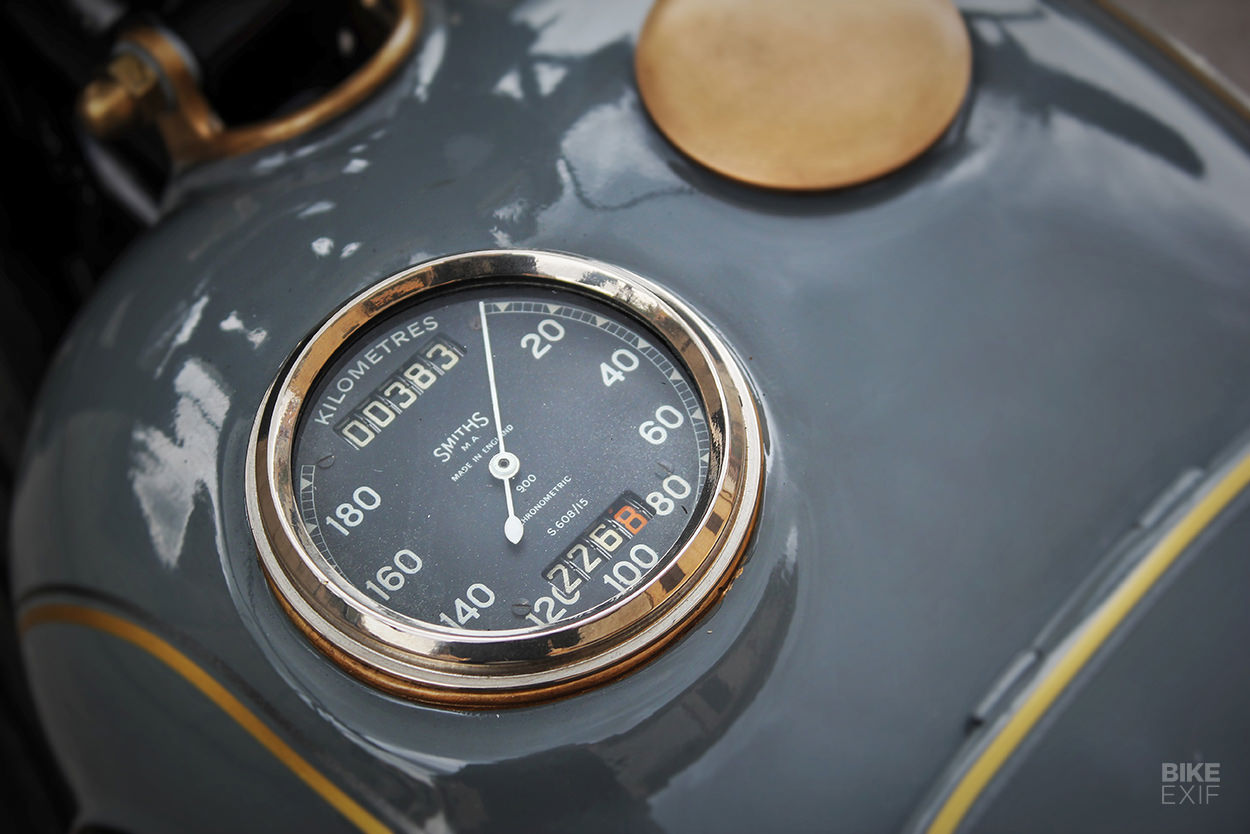 Details include a sprung solo seat and a tightly mounted rear fender. Every part looks like it belongs—from the tracker-style bars and grips to the side-mounted stop light and cocktail shaker exhausts. It’s a simple, but highly effective, build. [FMW Motorcycles] 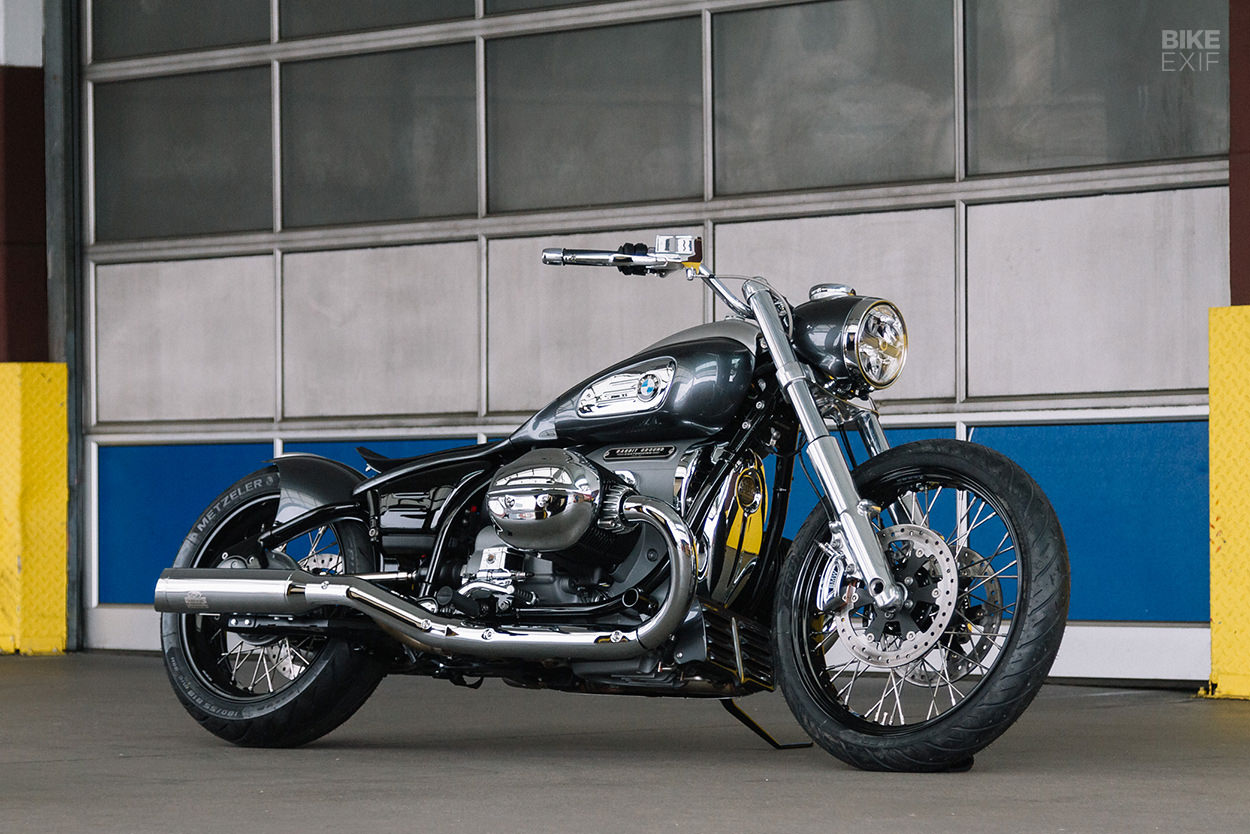 BMW R18 by Rabbit Ground Customizing BMW’s gambit of pitching the R18 as a platform for customization has paid off. We’re seeing more and more custom spins on the king-sized boxer, and the bar is being raised at an alarming pace. This latest R18 custom comes from a BMW specialist in Rüsselsheim, Germany and it’s a total banger.

Since RGC is part of a 40-year-old BMW dealership, they decided to pay homage to the iconic /5 ‘toaster tank’ model. So they called in an expert to help hammer out some custom bodywork: Udo Kohse from Unikat-Werk / Bike-Project. 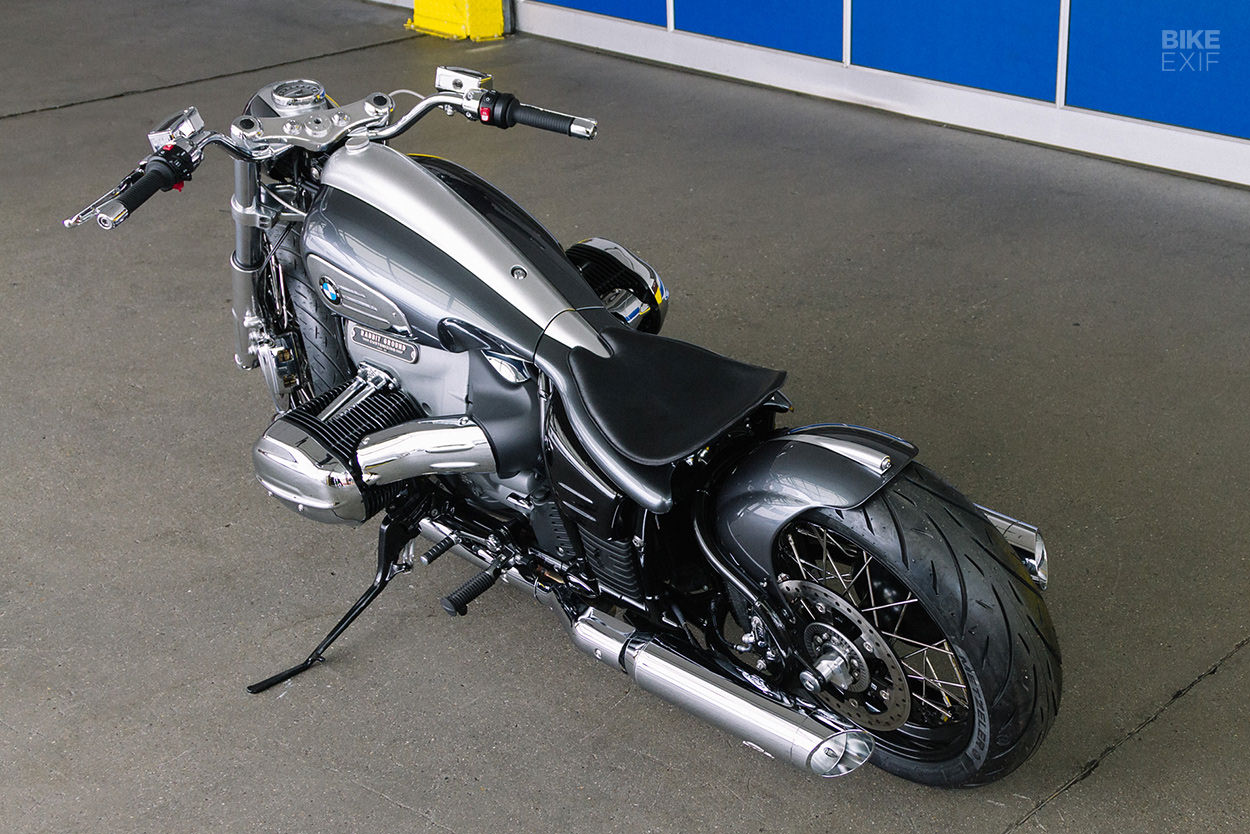 Udo added a ridge atop the R18’s fuel tank, beat in a pair of knee indents, and added a pair of chrome ‘toaster’ panels to the sides. There’s a new seat too, and the frame beneath it is wrapped in a custom piece of bodywork to improve the flow.

Out back is a custom fender, with a ridge that ends with a small embedded taillight. Up front, Udo’s shaped a new enclosure for the OEM headlight that now also houses the speedo. 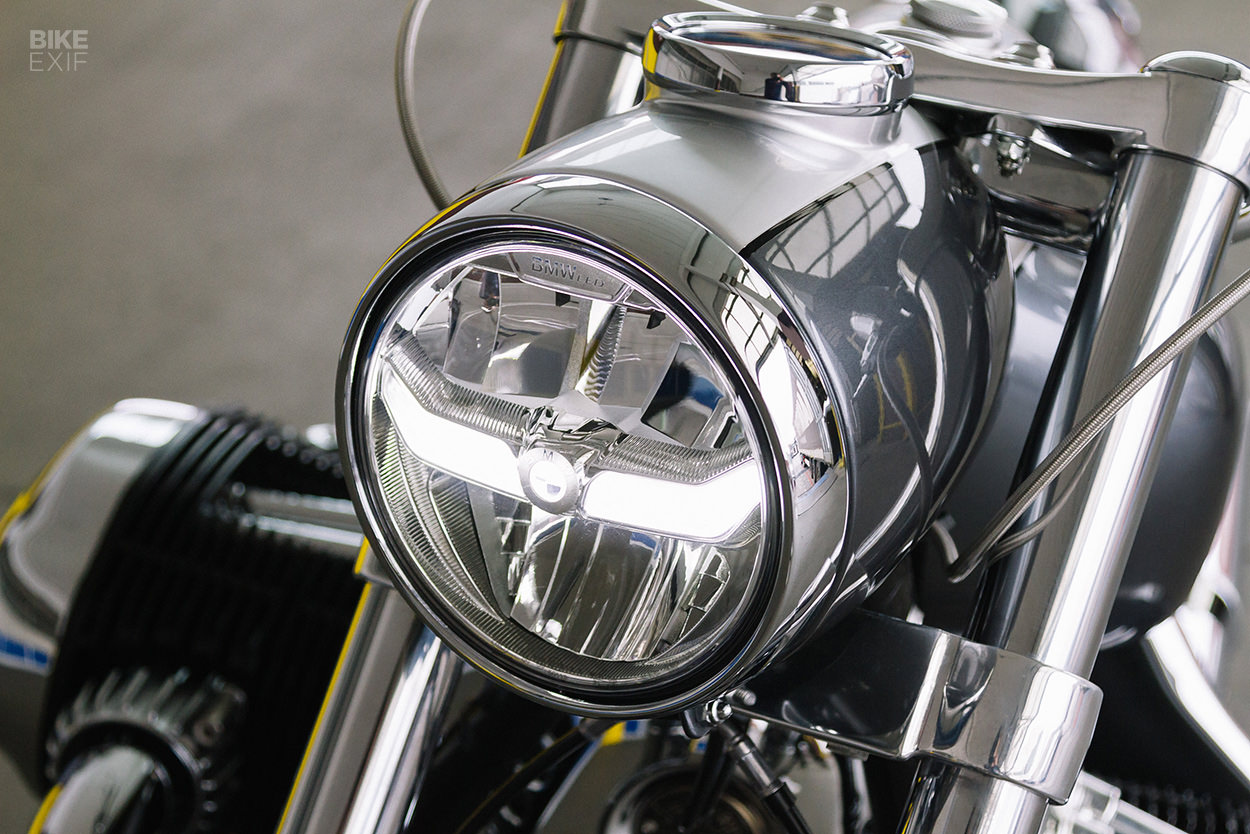 Other changes include a switch to 21F/18R wheels, custom handlebars, and a set of Kellermann Atto turn signals. The exhaust is a prototype from the Dutch specialist Dr. Jekill & Mr. Hyde and Rabbit Ground have kept the paint classy with a simple grey and silver livery.

It’s an exceptionally well-packaged custom, and another stylish entry into a fast-growing list of R18 customs. [Rabbit Ground Customizing] 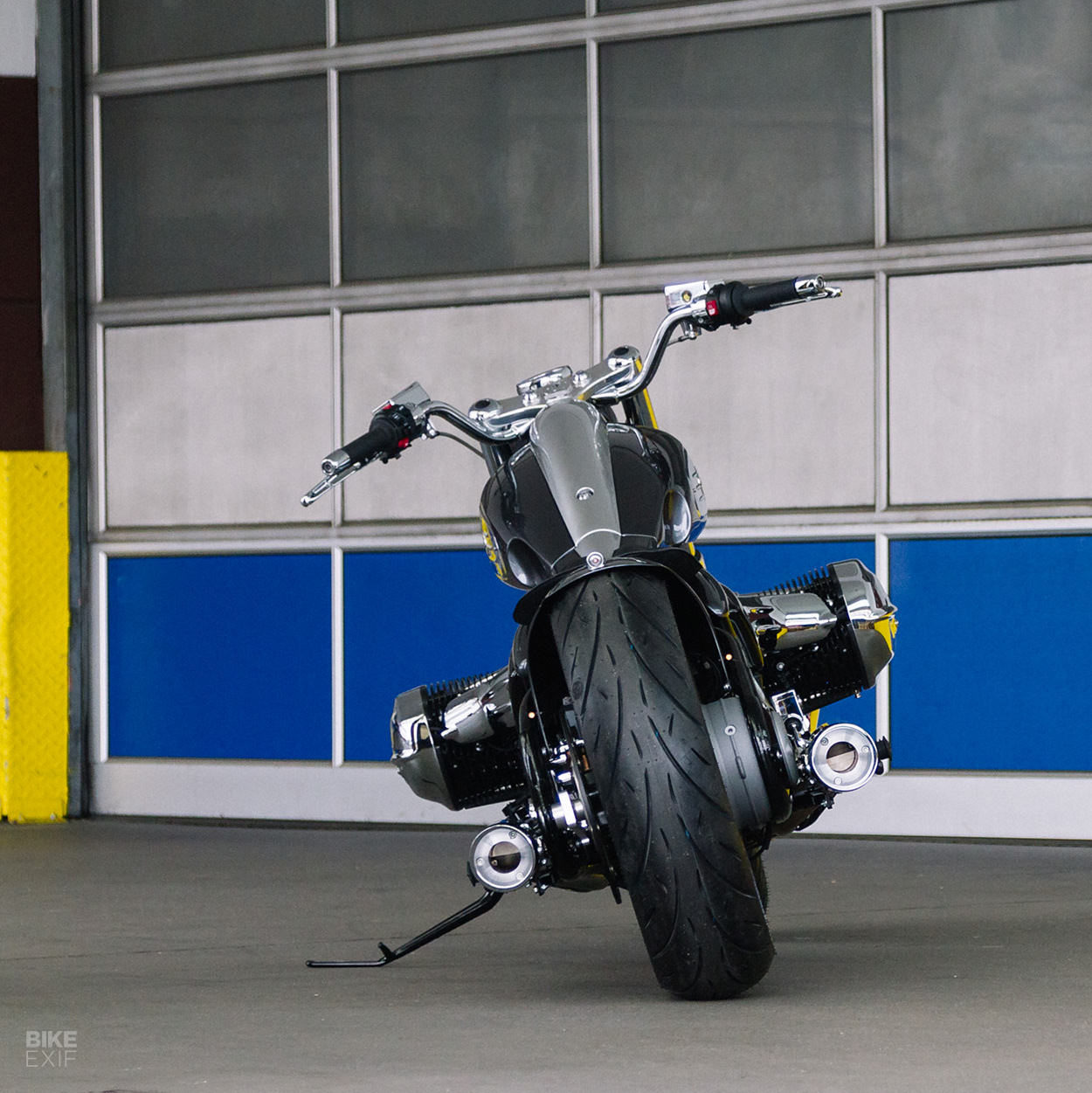