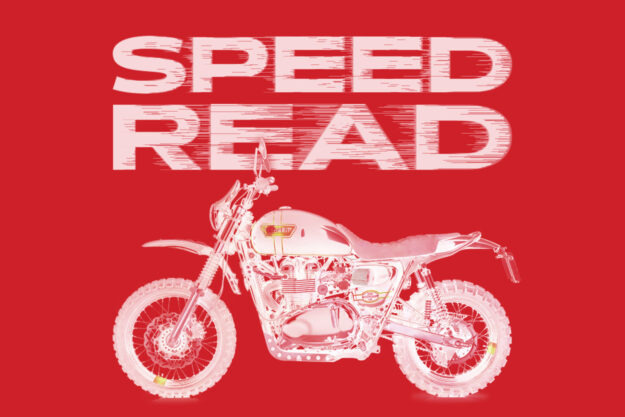 A Triumph Scrambler from a crew that knows Triumph’s modern classics inside out, a Mike Hailwood homage from Japan, a new middleweight twin from Moto Morini, and an electric bike that eschews traditional motorcycle design. Jump in and take your pick. 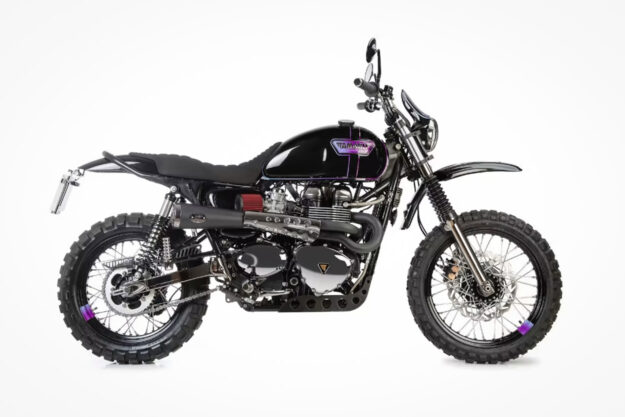 Triumph Scrambler by Tamarit Motorcycles The Spanish whizz-kids at Tamarit are so well-versed in the art of building custom Triumphs, that they can churn them out with their eyes closed. This Triumph Scrambler is proof. It’s loaded with details we’ve seen on previous builds for them—but it’s still a stand-out build. 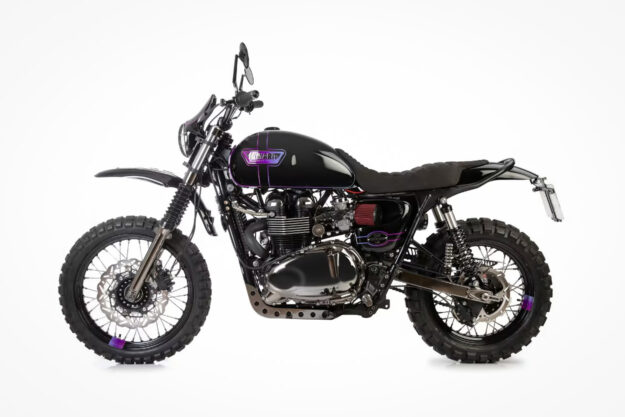 The bike is based on Triumph’s previous generation air-cooled Scrambler 900, and wears a number of Triumph-specific Tamarit parts. The high-mounted front fender is from their catalog, as are the side covers, which have been designed to make room for a pair of pod filters.

Up top is a custom seat that runs right up against the tank, in the style of modern dirt bikes. The subframe’s been trimmed and looped, with an LED taillight embedded in the back. The rear’s finished off with a stubby rear fender and a tidy license plate bracket. 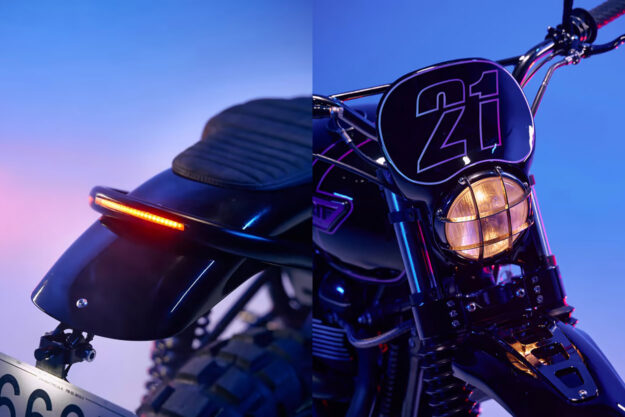 Out front you’ll find a classic enduro-style headlight, dressed with a number board. Just behind it are a set of vintage motocross handlebars, fitted with Biltwell Inc. grips, and Motogadget switches and bar-end mirrors. The cockpit’s finished off with a minuscule Motogadget speedo.

Mounted on the right side of the bike is a full two-into-one exhaust system from Zard. Other new parts include the foot pegs, rear shocks and burly Tamarit sump guard. 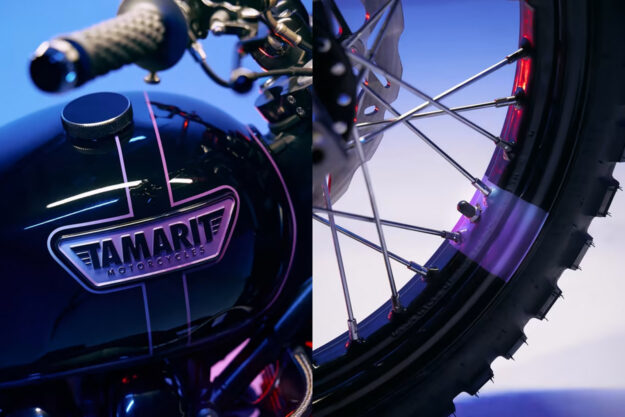 It’s a well-judged collection of mods, amplified by an even better livery. The subtle hits of pink and purple are inspired—and if you look closer, you’ll notice that a bunch of parts have been nickel plated too.

It’s another hit from Tamarit, but that’s hardly a surprise. [More] 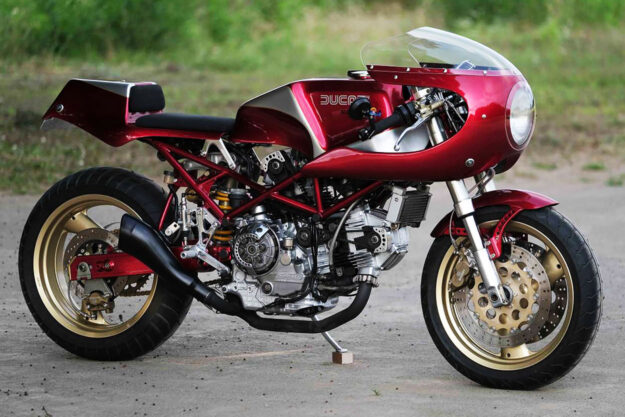 Ducati Monster by Gull Craft Mike Hailwood’s 1978 Isle of Man TT comeback is the stuff of legend, instantly elevating his Ducati NCR 900 race bike to icon status. We’re suckers for custom bikes that pay tribute to Hailwood’s NCR, especially if they’re done right. And this one’s right up there.

It’s the work of the Japanese bodywork specialists, Gull Craft, and uses a first generation Ducati Monster M900 as its donor. But what’s really remarkable, is that everything you see here is plug and play. Since Gull Craft are in the business of selling parts, this is likely to pop up as a kit. 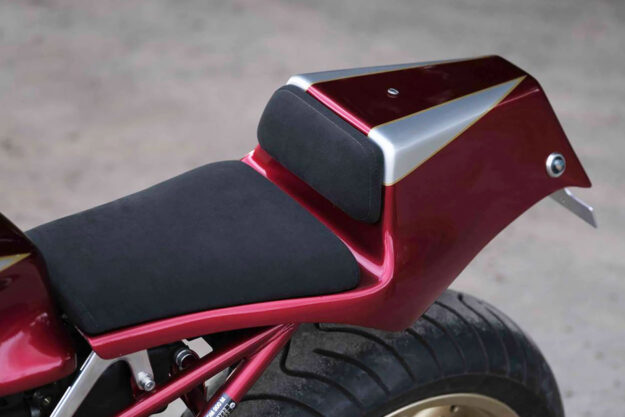 Gull Craft specializes in fiberglass reinforced plastic, so that’s what they used to shape the Monster’s new fuel tank, tail and fairing.

The tank is a dead ringer for the one on Hailwood’s bike, accurately tracing its deeply sculpted lines. The tail piece matches the original’s boxiness up top, but takes liberties with the design. It also sits on special alloy brackets, that allow it to be fitted without modifications to the Monster’s subframe. 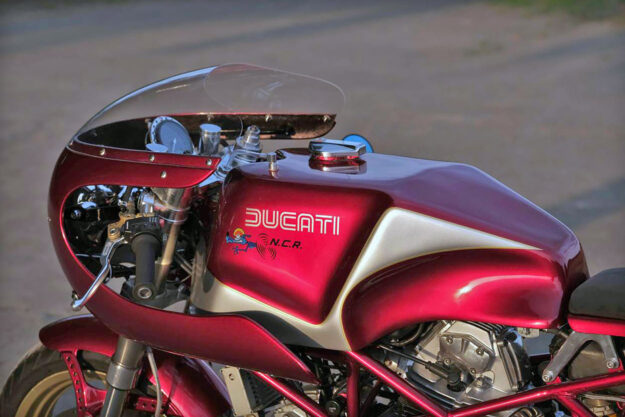 One major deviation is the bikini fairing, which strays from the NCR bike’s fully faired look. It works here though, particularly because it matches the Monster’s lines so damn well. Tucked behind it are a custom-made mounting system, new clip-ons, and a Motogadget speedo housed in a machined aluminum surround. 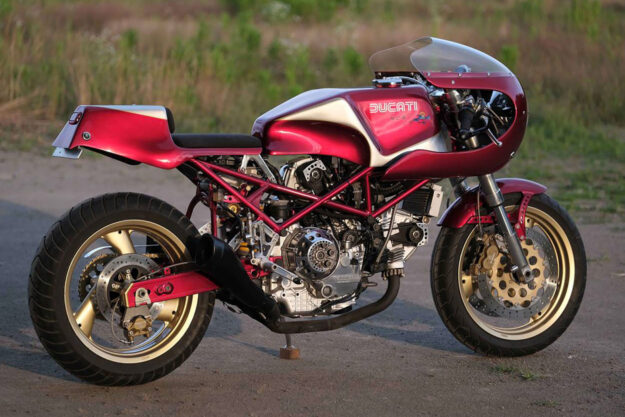 Tasteful details abound—like the host of engine dress parts, and the delightful blacked-out exhausts. The livery’s a nod to NCR’s colors of the day, with the company’s Wile E Coyote motif on the tank.

If there’s a better use for an old 90s Ducati Monster, we can’t think of it. [More] 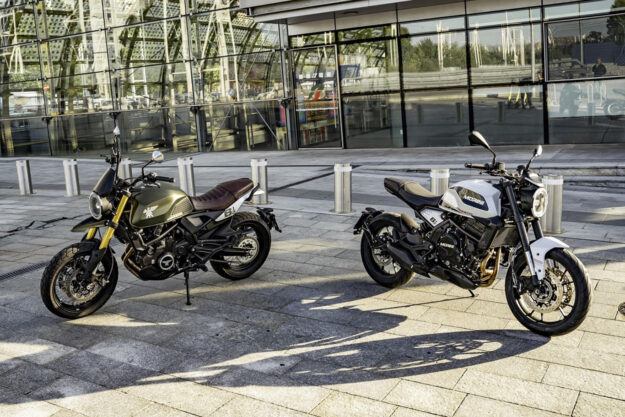 The Moto Morini Seiemmezzo If there’s one corner of the motorcycling industry that’s poised for growth, it’s middleweight modern classics. Royal Enfield are onto a good thing with their 650 cc twin-cylinder Interceptor range—and now Moto Morini are entering the fray with the Seiemmezzo. 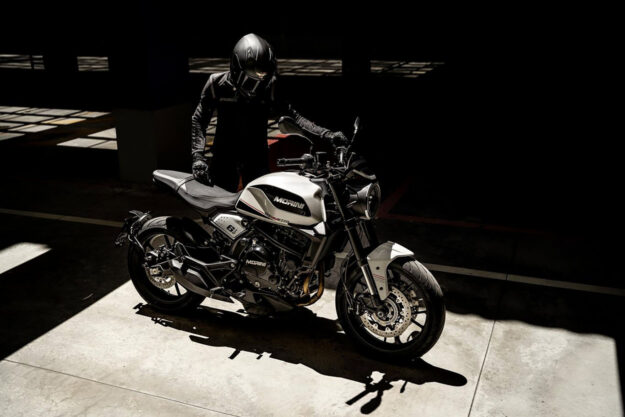 The Seiemmezzo comes in two versions: the street-focused STR [above], and the scrambler-inspired SCR [below]. They’re effectively the same bike in different trim, powered by a 649 cc inline twin engine (Seiemmezzo is Italian for “six-and-a-half”). The spec sheet lists 56.9 hp, 54 Nm and a dry weight of 200 kg [441 lbs].

Kayaba suspension props the bikes up, with 120 mm of travel at both ends. And both bikes use the same 18F/17R wheel size combo, with ABS-equipped Brembo brakes. They also share the same 16 liter fuel tank, 810 mm seat height, LED lighting and 5” TFT display, with Bluetooth connectivity. 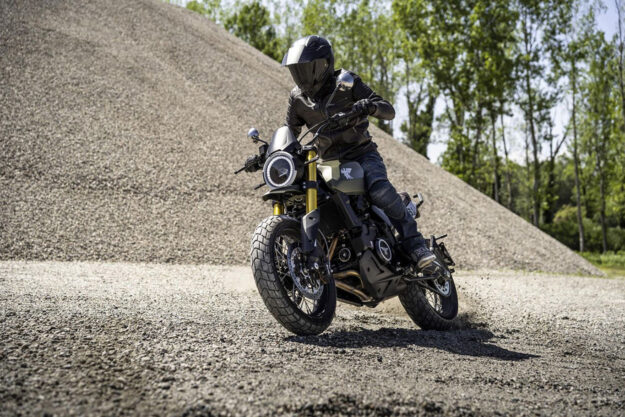 Where they differ greatly is their styling. It’s all very self-explanatory: the STR comes with road-biased Pirelli Angel GT tires, wrapped around alloy wheels, while the SCR has Pirelli MT60RS dual-purpose tires on tubeless spoked wheels. 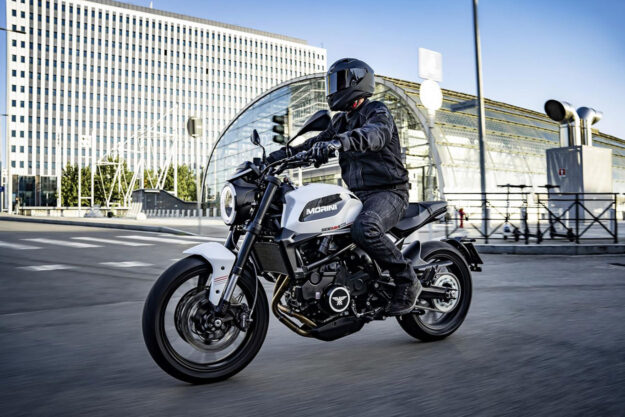 The SCR gets higher bars, a small fly screen, a high-mounted front fender and an extended rear fender. The STR is a bit more pared-back, and also wears different side covers. And smaller details, like their mirrors, differ too.

There’s nothing new about pitching different versions of the same bike as “street” and “scrambler” versions, but we won’t hold it against Moto Morini. Both of these look good; a little more modern than classic perhaps, but still neat. More importantly, they look like they’d make great daily runners. 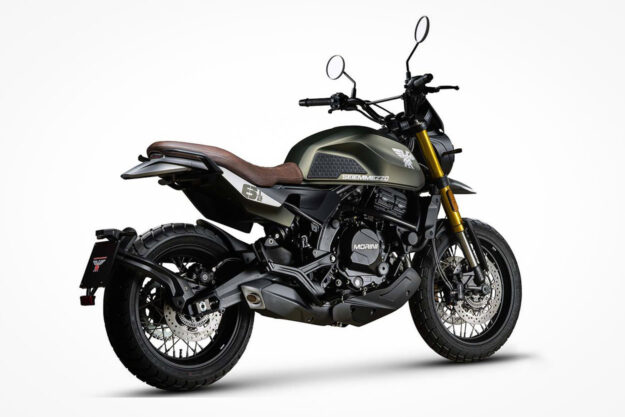 There’s no word on pricing just yet though, which will likely be a key factor in whether the Seiemmezzo is a hit or miss. Let’s hope the Italian marque keeps it reasonable. [More] 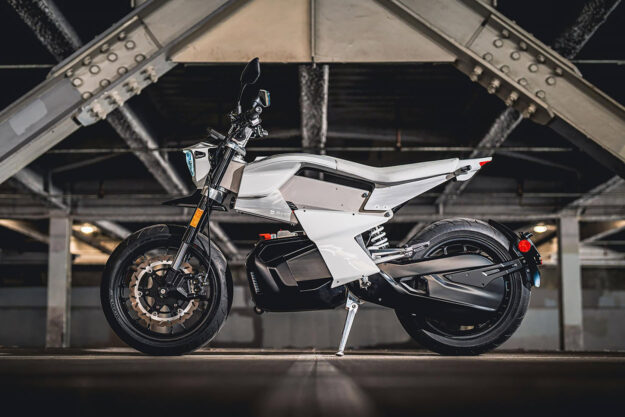 The Ryvid Anthem We regularly tout the idea that electric motorcycles can, and should, eschew conventional motorcycle design trends. The electric mobility company Ryvid clearly feels this way, as evident by their new electric bike, the Anthem.

The Anthem looks more like a custom bike than a production model. It’s unapologetically mechanical in its appearance, a little futuristic, and wholly intriguing. No surprise then, that it was designed by a team with a background in the aerospace industry. 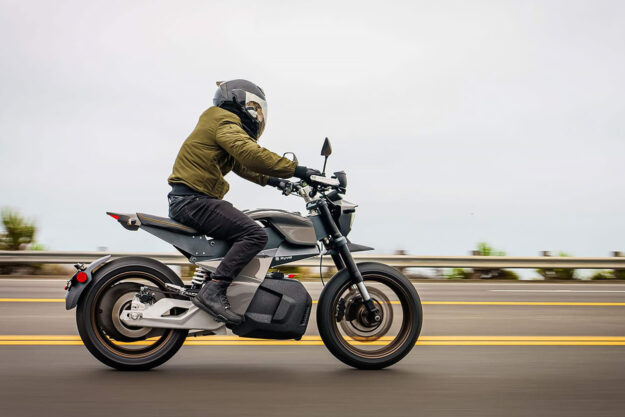 It’s not just about aesthetics though—the company’s founder, Dong Tran, explains how every detail serves a purpose. “We have chosen a different way of designing every part,” he says, “from the frame to the wiring harness to how things are attached and fastened. This is to reduce highly skilled labor and increase output of quality final product.”

The chassis is made from stainless steel sheets that are easy to source, and is riveted together from flat sections—so there’s no stamping or tooling required. The gaps in the bodywork not only help to reduce weight, but also help to maximize airflow to aid in cooling. And the engine is housed in the Anthem’s swingarm, which doubles up as a big heat sink. 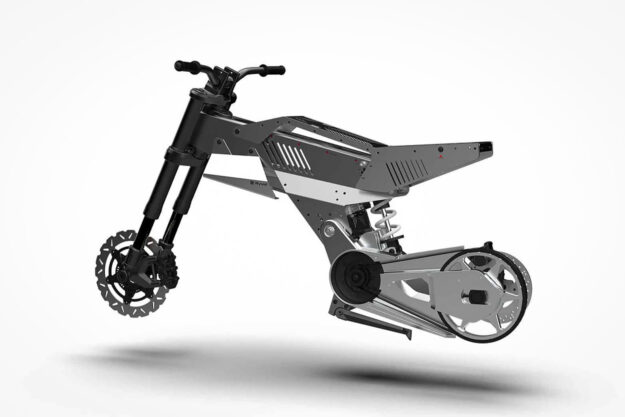 The entire construction is modular too, making it easy to assemble, and ensuring the design is future proof. It has some forward-thinking features too—like the ability to adjust the seat height between 30 and 34 inches, via a switch on the handlebars.

As for performance, the Anthem’s small stature gives away its intended use. With a top speed of 75 mph, and a predicted range of 50 to 75 miles, it’s not pitched at riders that want to go fast or far. Instead, Ryvid is targeting a niche that they feel is underserved: aspiring riders that are stepping up from automatic scooters or electric bicycles, and need an approachable bike to pull them in. 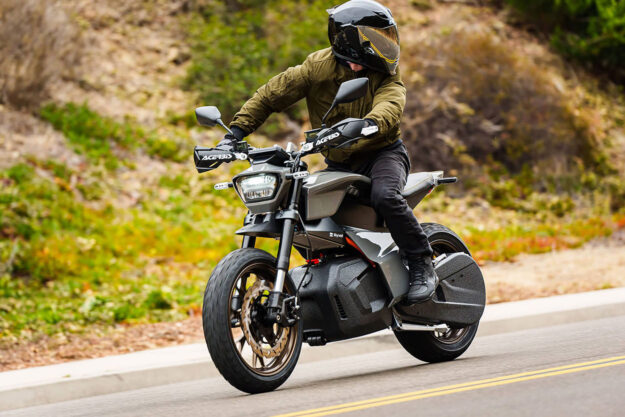 Pre-orders for the Anthem open a week from now, with a price tag of $7,800. Ryvid are starting with a limited run of 1,000 ‘Launch Edition’ units first, bundled with their own exclusive features.

We’ll be watching their progress with keen interest. [More] 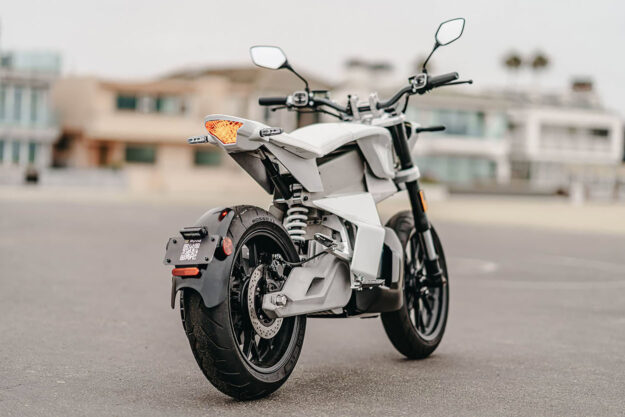