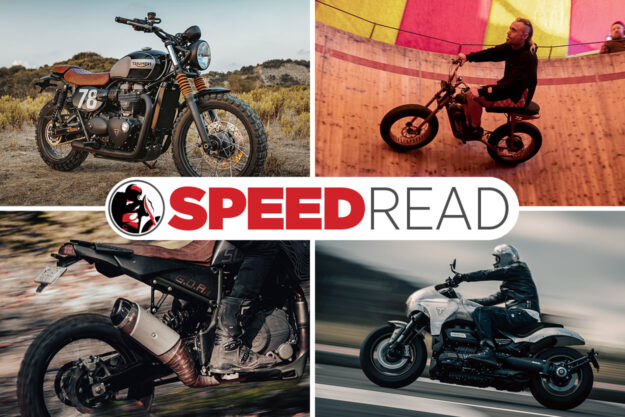 A couple of fraternal Triumph twins from Istanbul kick off this week’s batch of customs, followed by an e-bike built for the vertical thrills of the Wall of Death. Moto Exotica brings us their maximalist Royal Enfield Himalayan, and our old friend CW Zon is back with his unique take on Triumph’s massive Rocket 3R. And finally, Malle London debuts their latest short film. 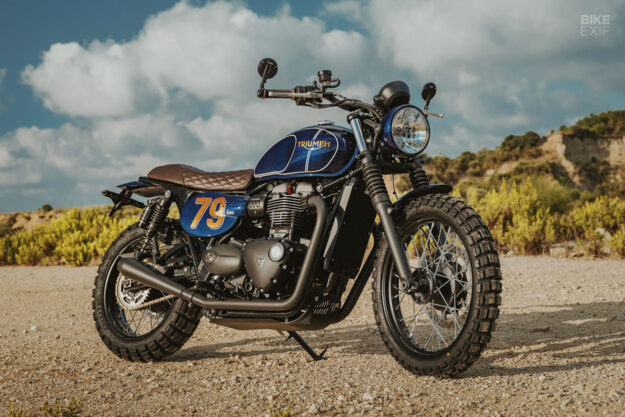 Triumph Scrambler 900 twins by Bunker Custom Cycles Motorcycling is a sport we so often enjoy alone, but sharing the experience with a close friend brings it to a new level. Lifelong friends Pekin and Mert had been riding together since they learned how to keep a couple of bikes upright. Now in their 40s, they wanted to a pair of matching custom machines to enjoy together.

Considering the use of these motorcycles—riding around the city, commuting, but also conquering off-road challenges on the weekends—the two quickly decided on Triumph Scrambler 900s as base models for their builds. 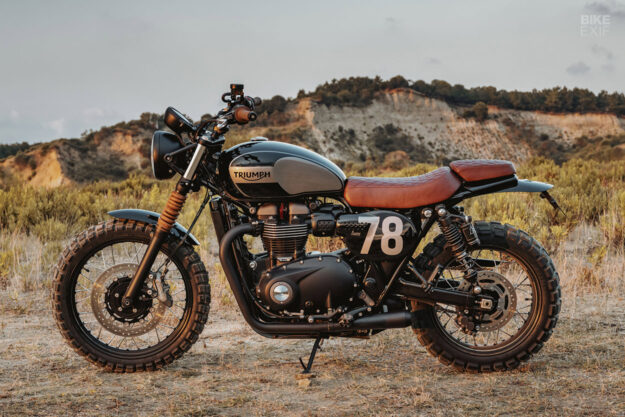 The bikes were delivered to Bunker Custom Cycles for their makeovers—and to serve as test mules for a new line of bolt-on parts.

Each bike was built up with custom suspension, featuring upgraded fork internals and new Fox rear shocks. Each got a new handmade exhaust system too, redirecting the headers away from their original high-mounted position for a more comfortable ride. They also now wear Bunker’s signature skid plate and radiator guard.

That’s where the similarities end, since the two owners chose to differentiate the bikes with paint and seating styles.

The two scramblers were named ’78,’ and ’79,’ after the birth years of their owners. 79 was equipped with a slimmed-down but traditional seat, while 78 got a two-piece seat, allowing for the passenger pad to be removed for use of a cargo rack. One is wrapped in a blue livery, while the other uses a black and grey combo. 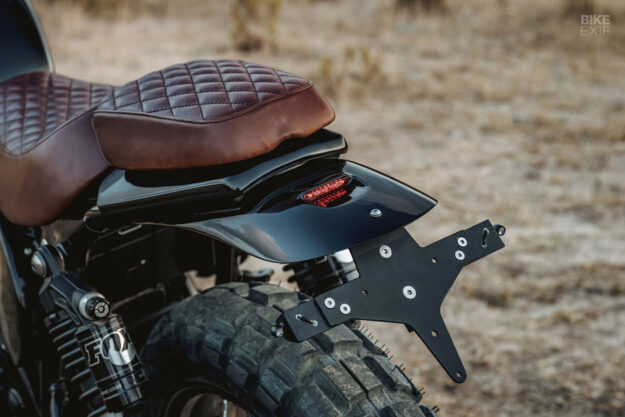 Parts like the side panels, fenders and license plate mounts were all developed in-house, mostly using 3D design and printing techniques. They’re now available on Bunker Cycles’ website—so if you’d like to pursue a similar look for your Scrambler, it’s only a few clicks away. 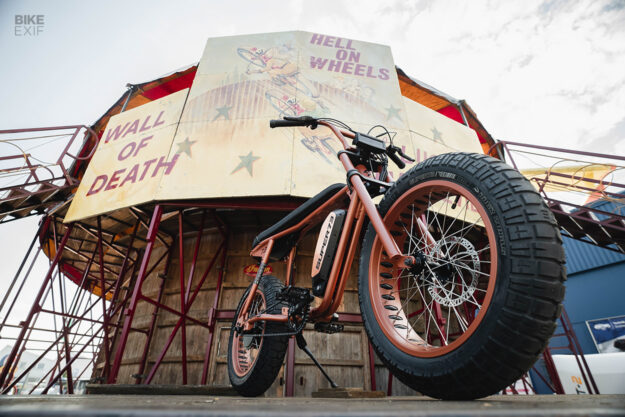 Custom Wall of Death Super73 The Wall of Death is a high speed thrill show that’s been around for over 100 years. Riders start on the flat center of a wooden cylinder, gaining speed as they climb onto the vertical walls, using centrifugal force to stay glued to the sides. While gas-powered vehicles have been the long-standing choice of vehicle, the instant torque offered by electric power is an obvious choice… so Super73 got an idea. 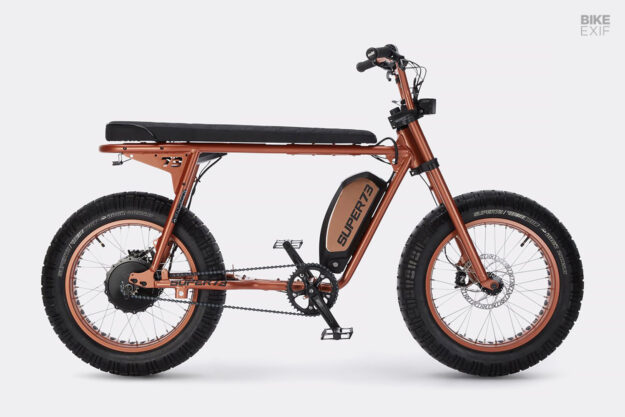 Lovingly called Marvelous Marv, Marvin Prinssen is a Dutch Wall of Death rider and a member of the Lucky Daredevils. After seeing Marv and the crew do their thing at Wheels and Waves in Biarritz, the team at Super73 knew this would be a natural partnership.

They started a conversation, and in what seemed like minutes, Marv was up on the wall riding an e-bike. Shortly after, a one-off commission began. 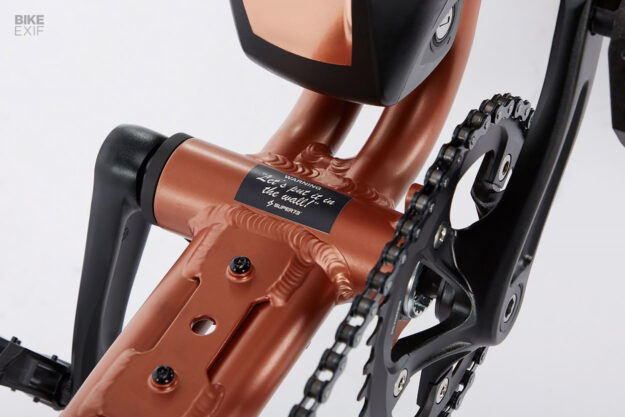 Starting with what looks to be Super73’s S2 chassis, the spokes were reinforced and strengthened, and the front end was equipped with a rigid fork to keep the bike sturdy and reliable with the incredible g-forces at play. An extended seat was upholstered with high-grip material, to help the rider stay on while the vehicle is parallel with the floor. A throttle was added to help Marv get up to speed as quickly as possible, without having to pedal.

The bike’s battery was relocated lower inside the frame, both to help with mass centralization and to protect the power source if things go sideways—or more sideways than intended. Lastly, a bit of copper paint sets off the build and helps further distinguish this one-off custom.

Marv’s Super73 will be touring with the Lucky Daredevils, so look out for them around Europe if you would like to see this unique creation in person. [Super73] 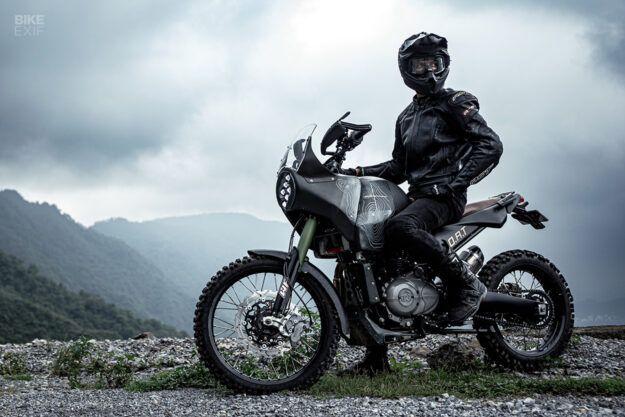 Royal Enfield Himalayan by Moto Exotica Based in Dehradun, India, Moto Exotica is tucked into the beautiful Himalayan countryside. Since 2013, the shop has made a name for itself by building custom scramblers and café racers around vintage Yamaha RDs. But recently, they were presented with a new challenge: to take the already capable Royal Enfield Himalayan, and build it out to the maximum level. 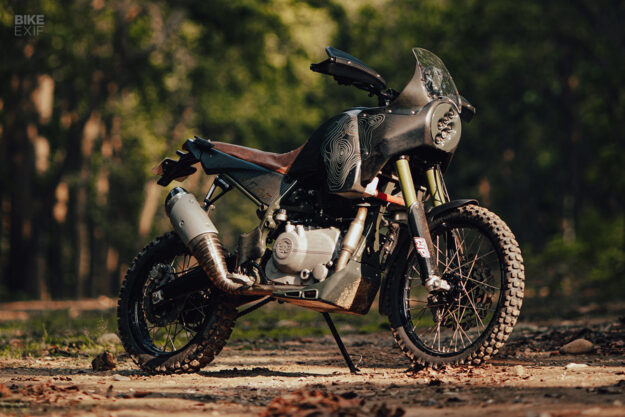 With a brand new Himalayan on hand, the team at Moto Exotica sought to retain Royal Enfield’s design language, keeping the round headlight and general shape of the gas tank. Design sketches and ideation led to over 50 pieces, designed in CAD and then milled. This shop does not outsource any of its work, so the full set of carbon fiber bodywork that you see here was formed in-house.

To get some more punch out of the engine, a custom 500 cc big bore kit was machined, and a high-lift camshaft was installed before the whole system was flashed with a programmable ECU. A more compact and lighter-weight exhaust system was fabricated, with a matching carbon fiber tip and a heat shield on the muffler. 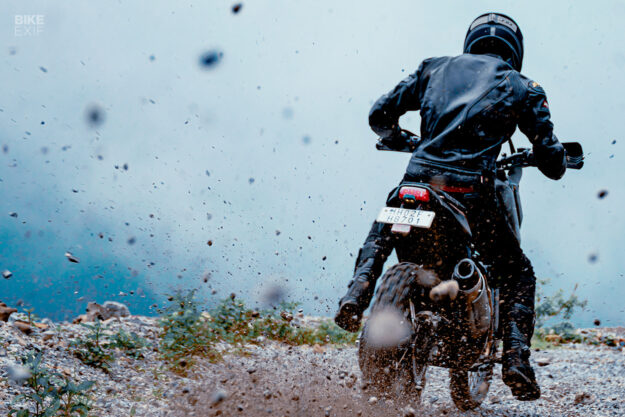 Aiming for a taller, more enduro-like stance, the Himalayan was fitted with long-travel WP Suspension forks, and an all-new custom swingarm featuring a fully adjustable direct-mount shock. An 18” rear wheel and 21” front wheel were wrapped with dual-sport tires, and set with upgraded floating brake rotors and a 4-pot caliper up front. 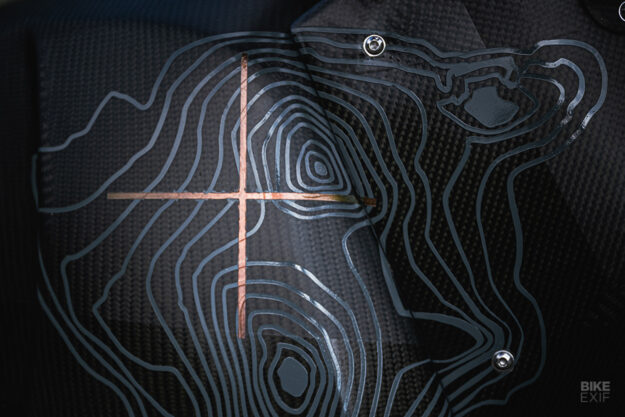 As an homage to Moto Exotica’s location, the colors used on the build were all inspired by hues found naturally in the rocky Himalayan countryside. The new carbon gas tank was painted with the contours of Mount Everest.

It seems no stone was left unturned, as this may indeed be the ultimate Himalayan for conquering the landscapes that this machine was named after. [Moto Exotica] 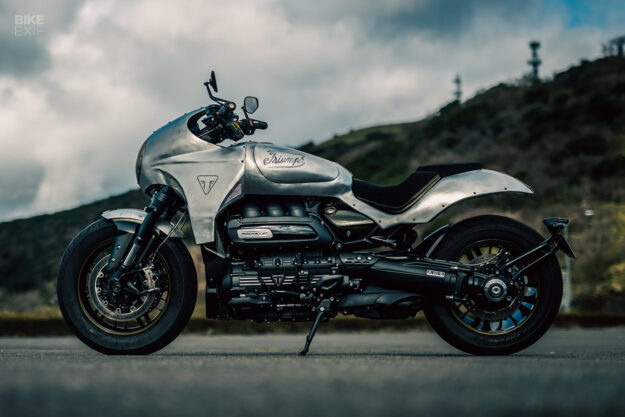 Triumph Rocket 3 R by Custom Works Zon Yuichi Yoshizawa of CW Zon is not a builder that follows trends or plays by any kind of rulebook. His builds are unique and immediately identifiable, even if the general style of each build varies greatly.

The latest wonder to roll out of the Japanese builder’s workshop is this Triumph Rocket 3 R roadster. It’s loaded with hand-formed bodywork that completely changes the look and feel of the bike, without altering the frame in any way. 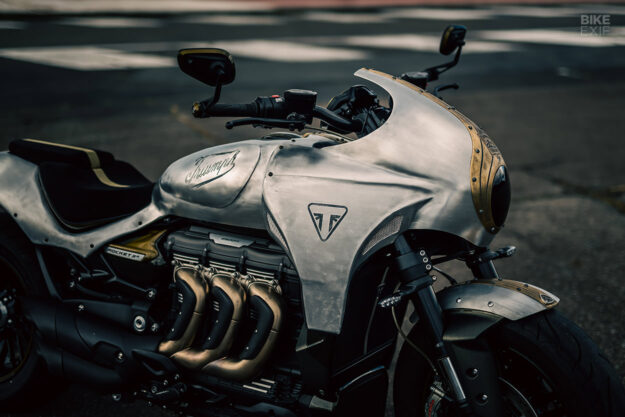 Triumph’s Rocket 3 R is an absolute beast. The 2,458 cc three-cylinder engine puts out a claimed 165 horsepower and 163 ft-lbs [221 Nm] of torque. Zon’s build takes this Rocket, and covers it in hand-formed and hand-engraved aluminum, with bronze detailing. The result is an amalgam of the Rocket 3’s original roadster style, a futuristic café racer, and a steampunk locomotive.

As always with Yoshizawa-san, all fabrication was done at the highest level. And since the Rocket’s original geometry was not altered in any way, we know this bike will ride just as Triumph’s engineers intended. 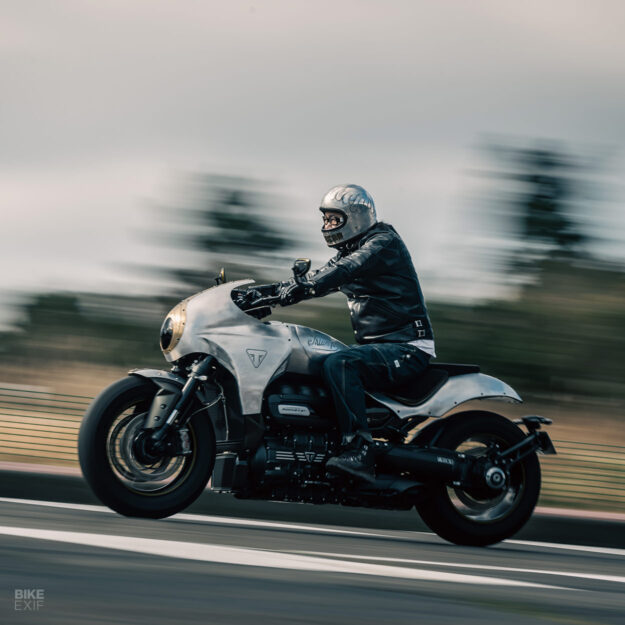 CW Zon showed this Triumph off at the Mooneyes Yokohama Hot Rod Custom Show recently—but it wasn’t the shops only entry into the show. Yuichi took top honors with a Harley Shovelhead muscle bike that we will be featuring soon. Stay tuned. [Custom Works Zon | Images by Hiromitsu Yasui] 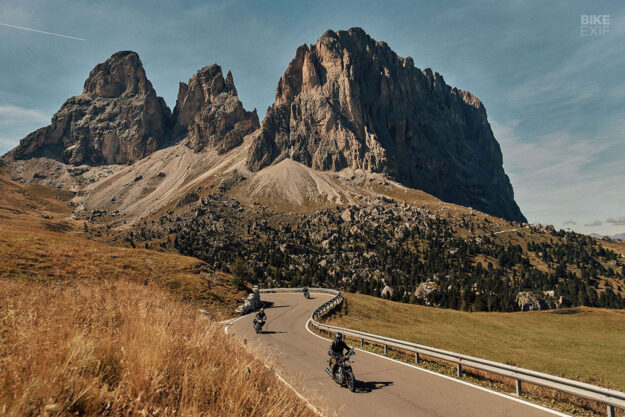 Malle Mountain Rally film Hosted by our friends at Malle London, the Mountain Rally is a six-day event that takes riders over 1,500 miles, through six countries, and through passes as high as 2,770 meters [9,088 ft]. The Mountain Rally is now the longest motorcycle rally ever completed, covering the entirety of the Alps Mountain Range, passing through all of the highest passes and wildest country before dropping back down to sea level at the finish line.

While the 2022 rally has now come and gone, a new film was just released to help bring you in and share the experience. Riders from all around the world meet in Austria. As we expect from an event hosted by Malle London, the same team that brings you the Malle Mile, there is an emphasis on style and many of the bikes are heavily customized. 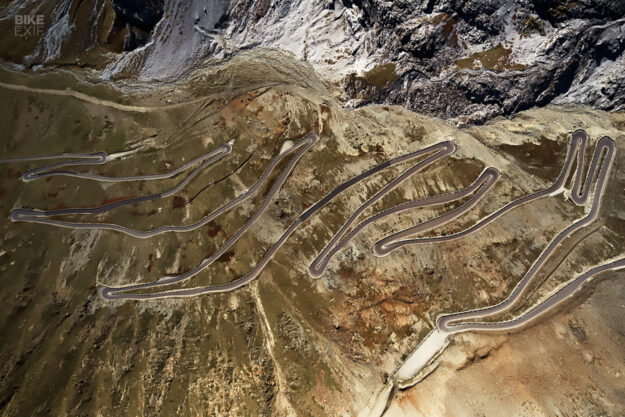 Clocking in at over seven minutes and 40 seconds, the Mountain Rally short film tells the stories of riders exploring new roads, overcoming the challenges of a long and grueling journey, and bonding through the experience. Catch it below. [Malle London | Images by Shane Benson]