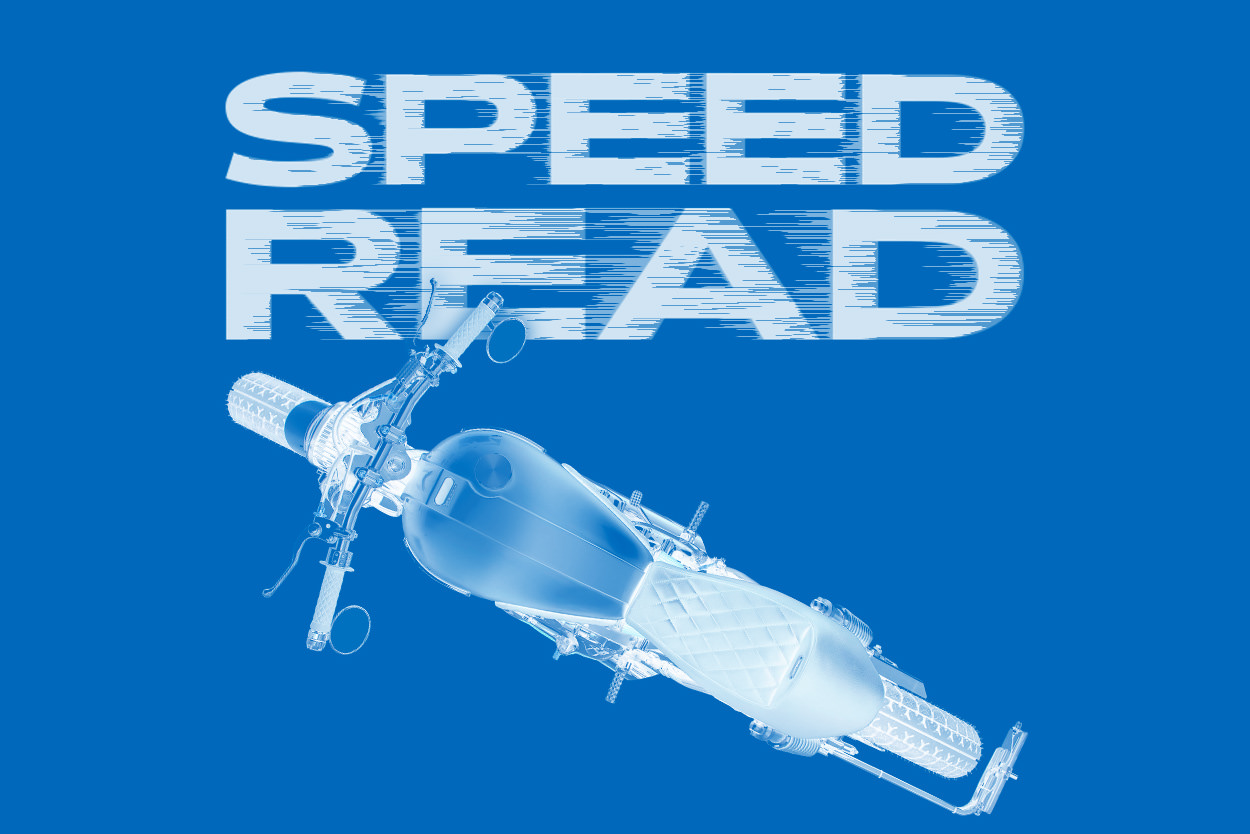 It’s all about mixing modern components and classic style this week. We’ve got a Triumph Bonneville from Spain, a BMW K1100 from France and a BMW R65 from the UK. Then we wrap things up with a Kawasaki Z650 draped in carbon fiber. 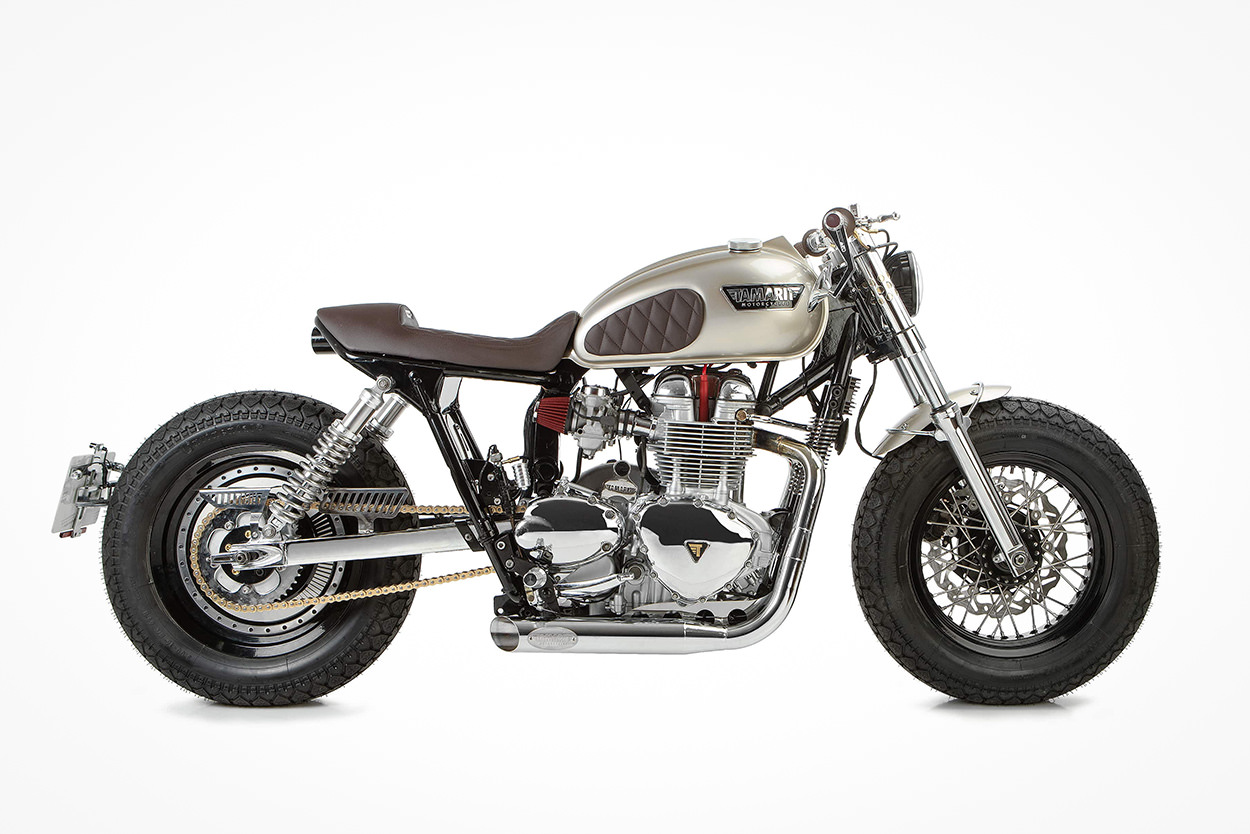 Triumph Bonneville T100 by Tamarit Motorcycles Spanish outfit Tamarit has built a whopping number of custom Triumphs, and they show no signs of slowing down. Their 97th build is a peculiar one—but in a good way.

The shop started with an older carb-fed Bonneville T100, then stripped it back in some areas and beefed it up in others. The result is a slick modern classic that’s sort of a café racer, but also sort of a bobber. And we love it. 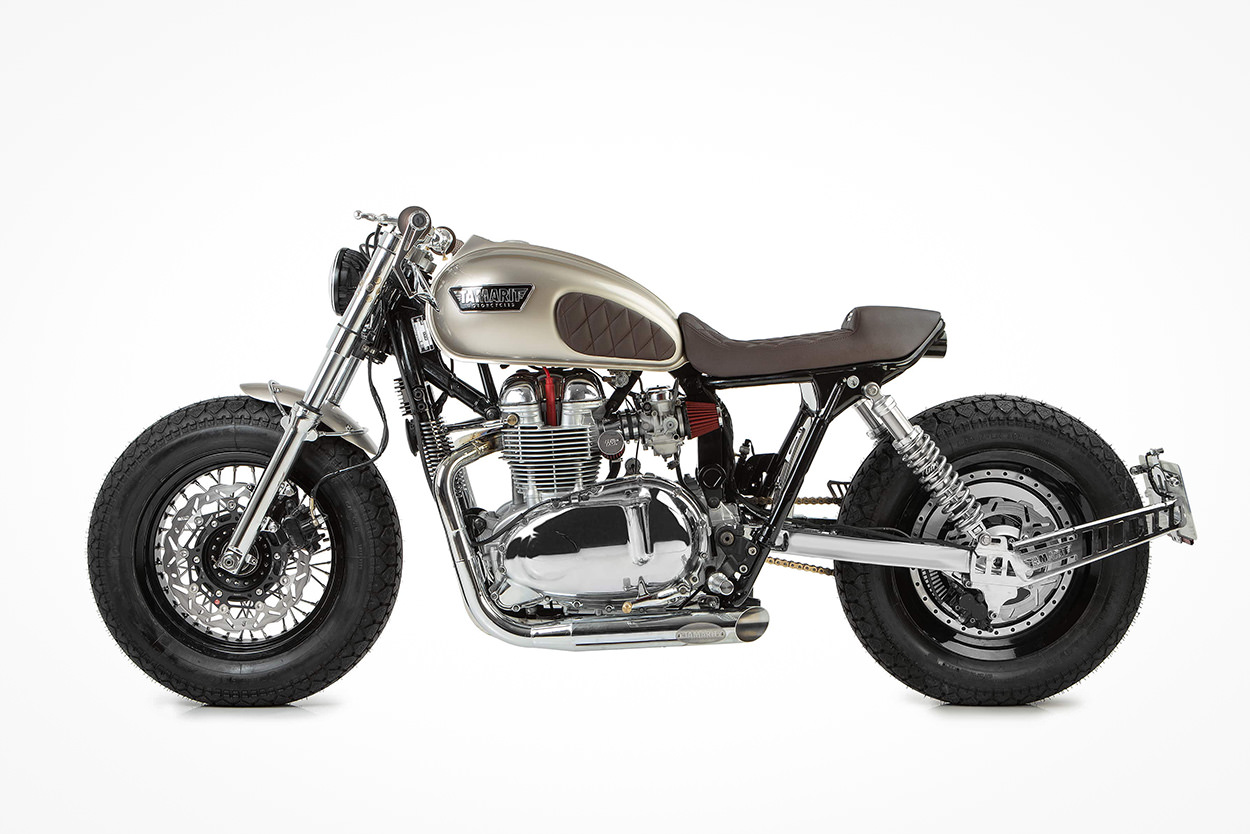 Dubbed ‘Aileen,’ this Bonnie’s low-slung stance can be attributed to its stretched swingarm and chunky tires. It now rolls on 5.00×16” wheels at both ends, with a spoked hoop up front and a solid wheel at the back. The subframe’s been trimmed right down, with a new set of shocks propping up the rear. 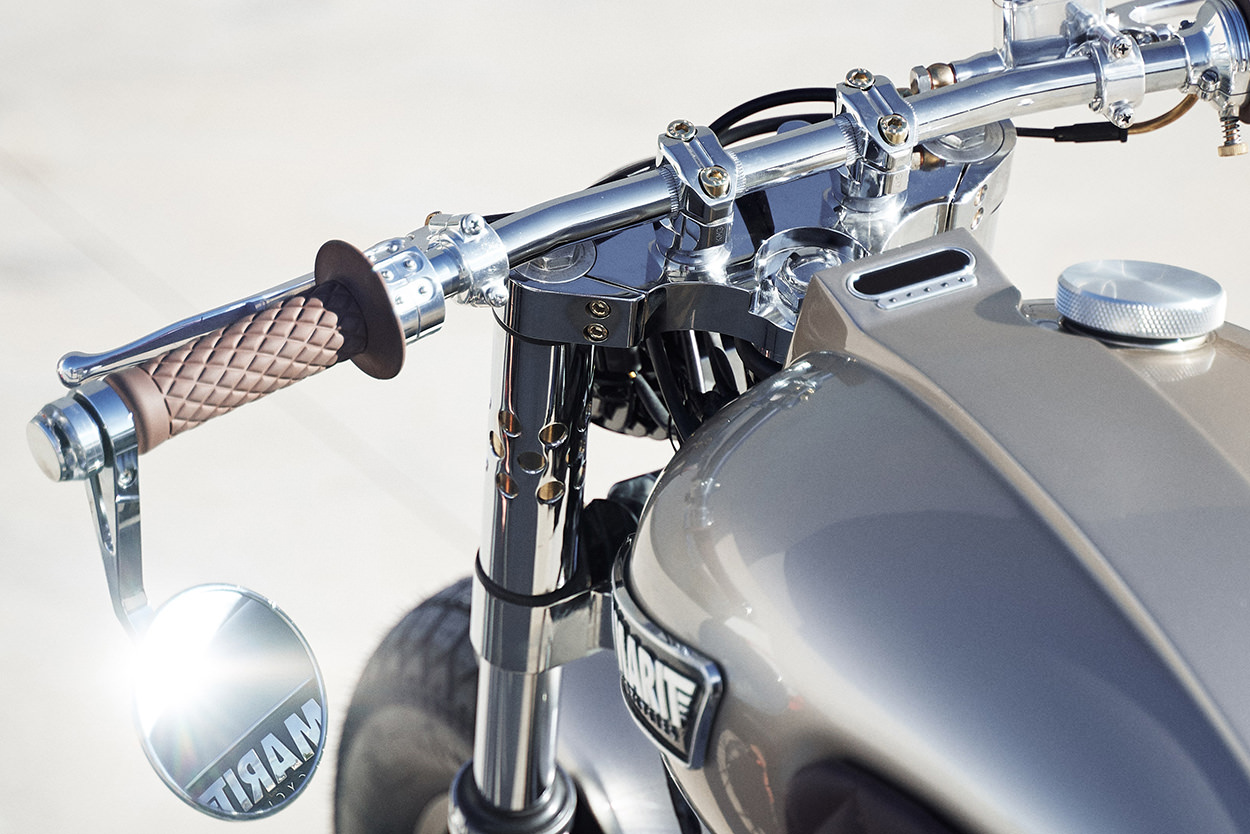 The speedo’s a tiny digital unit from Motogadget, but it’s not where you’d expect to find it. Tamarit fabricated a strip to run over the top of the tank, and sunk the speedo into the front of it. It’s accompanied by a tidy knurled gas cap.

Out back is a café racer-style seat, with a custom-made taillight housing poking out from under it. Other mods include an exhaust system from Tamarit’s own catalog, a stubby front fender, and a swingarm-mounted license plate bracket. 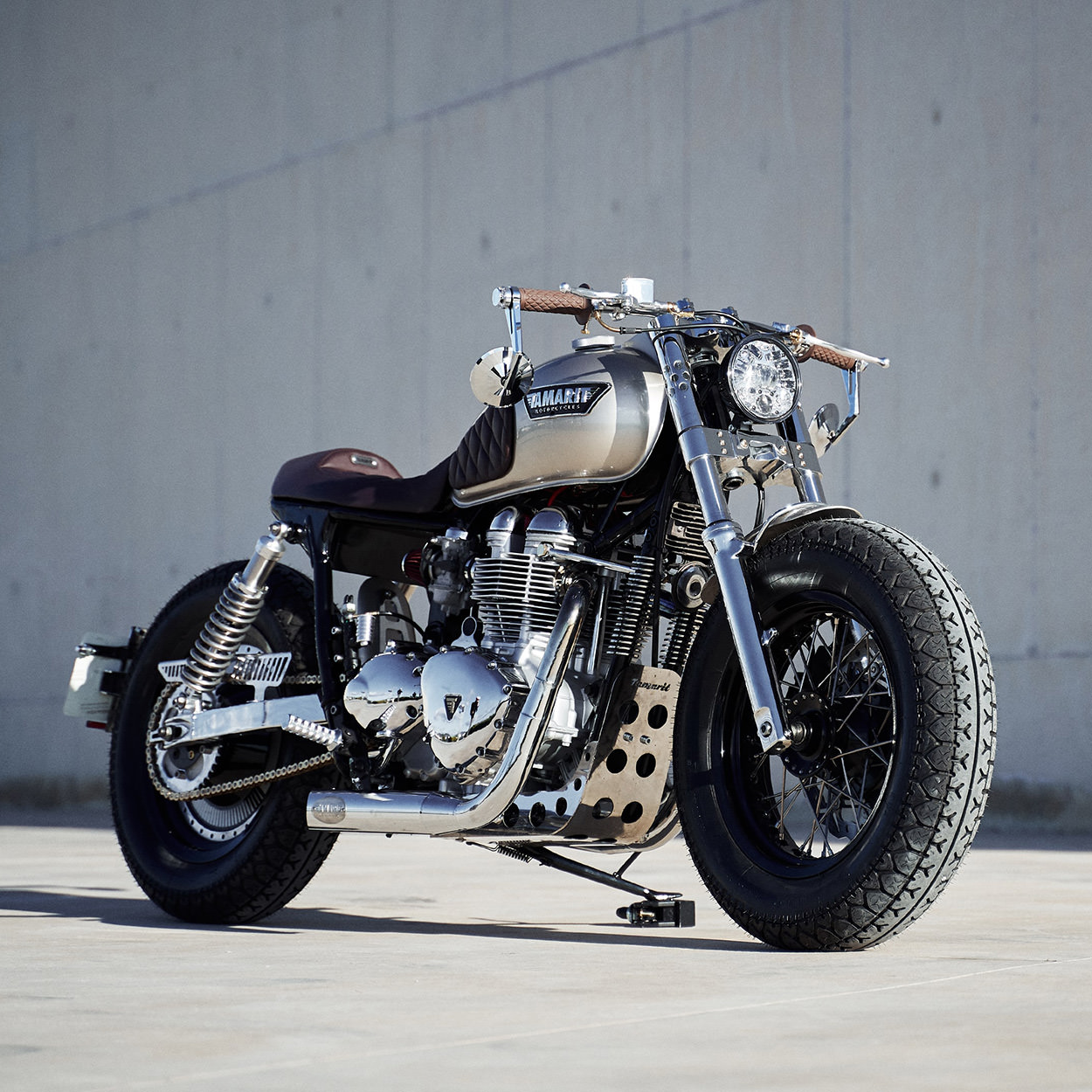 Tamarit actually had free rein on the design of the bike, so they picked a color they’d wanted to work with for a while: titanium. It’s a classy choice for this rowdy Triumph, along with the various polished, chrome and brass touches. [More] 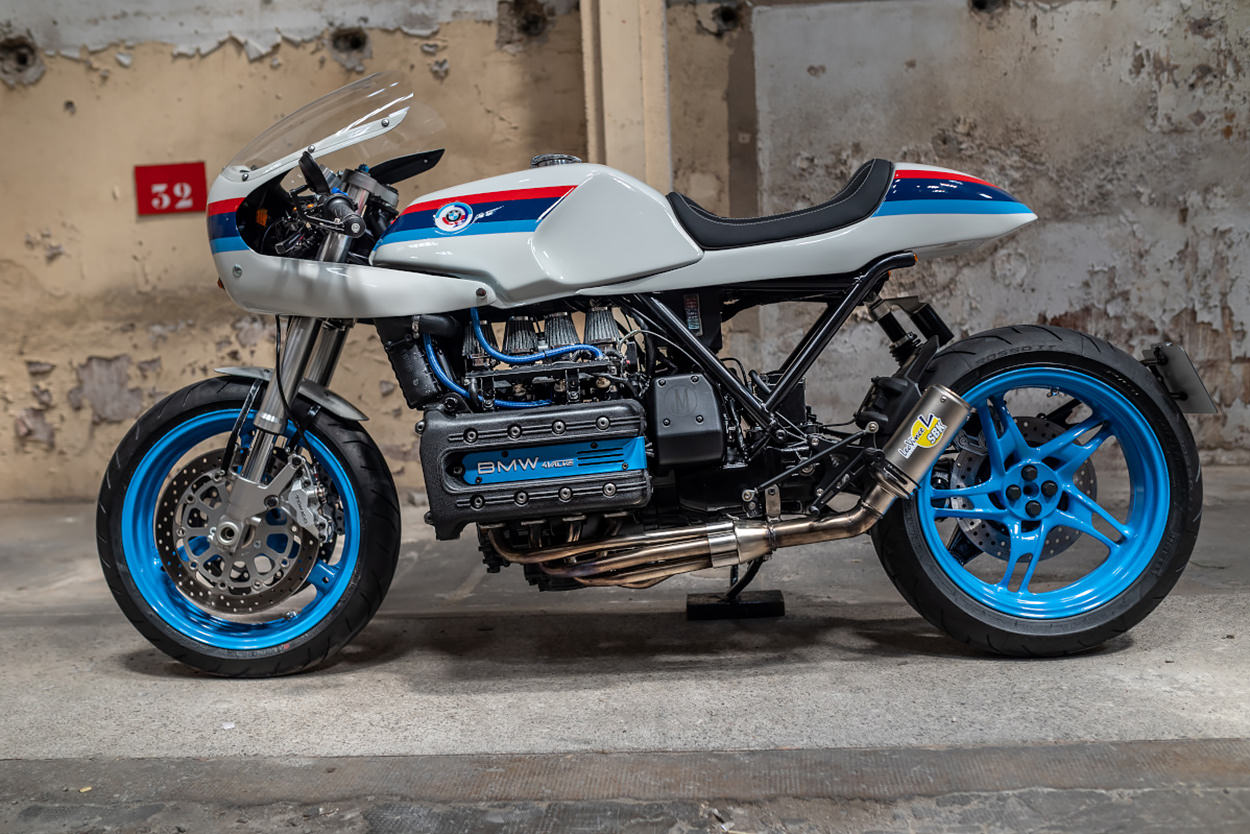 BMW K1100 by Jerem Motorcycles We admire custom builders that have the guts to take on a K-series BMW. Old ‘flying bricks’ don’t have nearly the same amount of grace and poise as their boxer-driven stablemates—so they’re hard to get right.

This 90s-model BMW K1100 from Jeremie Duchampt at Jerem Motorcycles in France hits the mark sweetly. Built for a friend, it’s sporting bespoke bodywork, some tasty chassis upgrades and a BMW M Performance-inspired livery. Think of it as a classic café racer with a slight modern sportbike vibe. 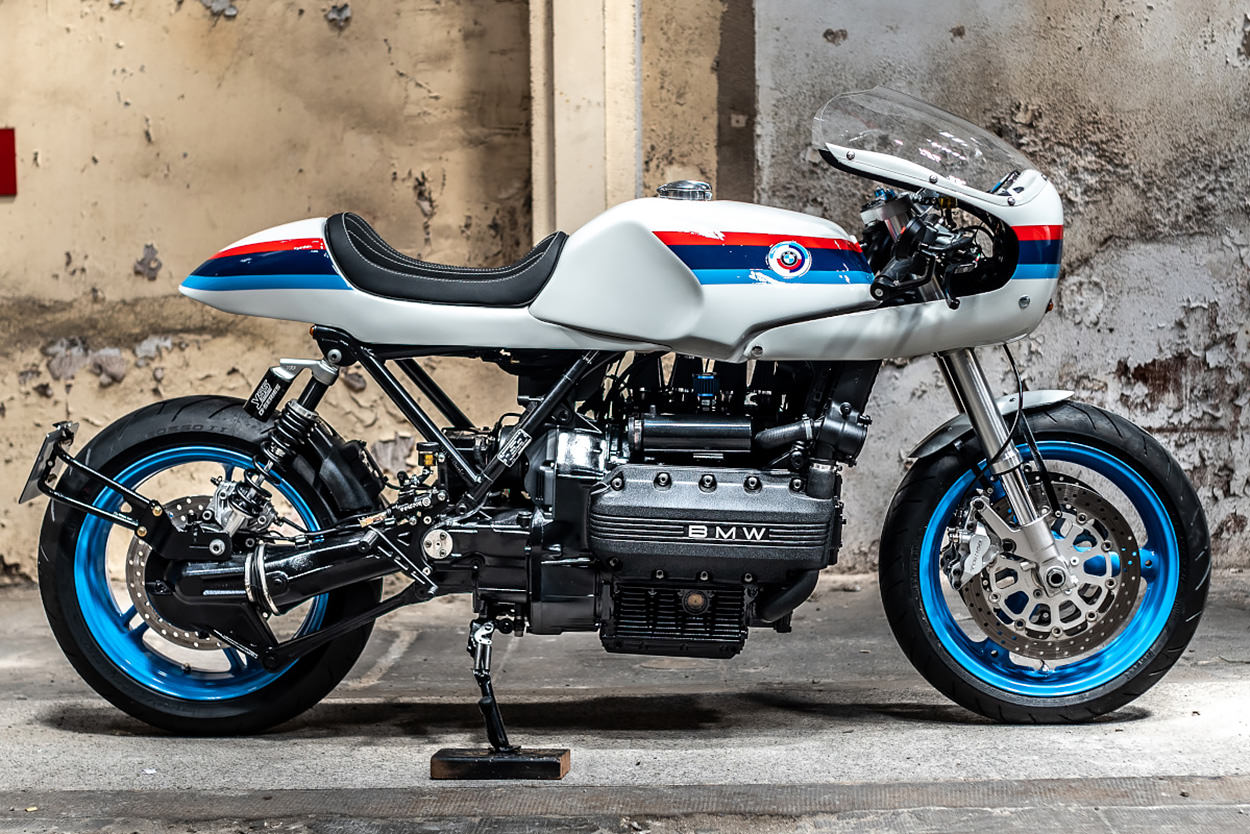 Jeremie’s built the K to go as good as it looks. Up front are the forks, front wheels and twin Tokico brakes from a Suzuki TL1000S. The rear wheel’s a BMW K1200GT unit, the rear shock’s from YSS and the tires are Pirelli Super Corsas.

Up top, Jeremie tweaked an aftermarket fairing to flow seamlessly with the K’s OEM fuel tank. The tail section is custom, and includes integrated taillight. The subframe below it has been altered too, with a pair of LED turn signals capping off the frame rails. 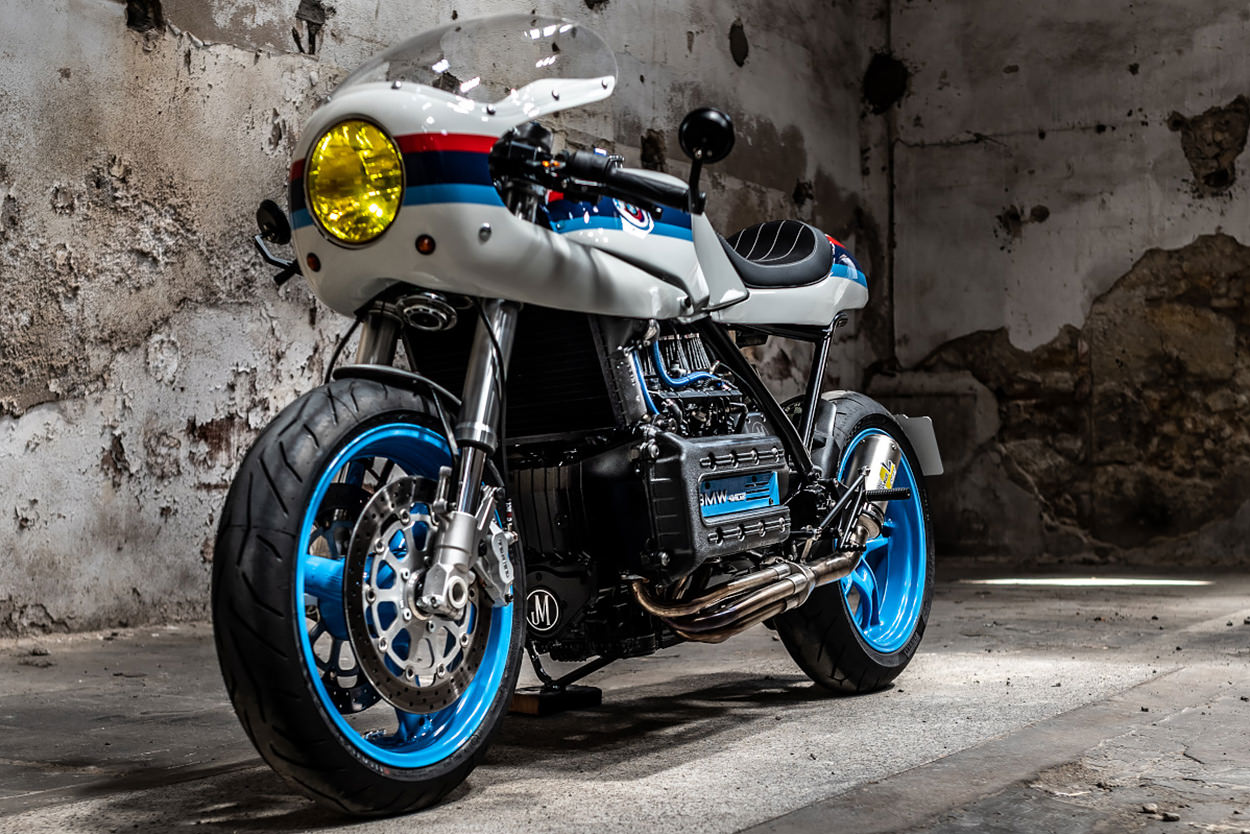 The motor’s been treated to an airbox removal and a new four-into-one exhaust system. There’s also a new oil cooler, and a full rewire with a keyless ignition from Five Aces. Jeremie also modified the choke, and moved the side stand to the right to dodge the oil ‘creep’ that can happen on K-series bikes.

There are also new clip-ons and rear sets, and the cockpit’s packing a digital speedo from Five Aces, along with fuel and water temperature gauges. A yellow headlight and a CNC-machined gas cap add some classic style, while details like the Alcantara seat and blue wheels feel contemporary. 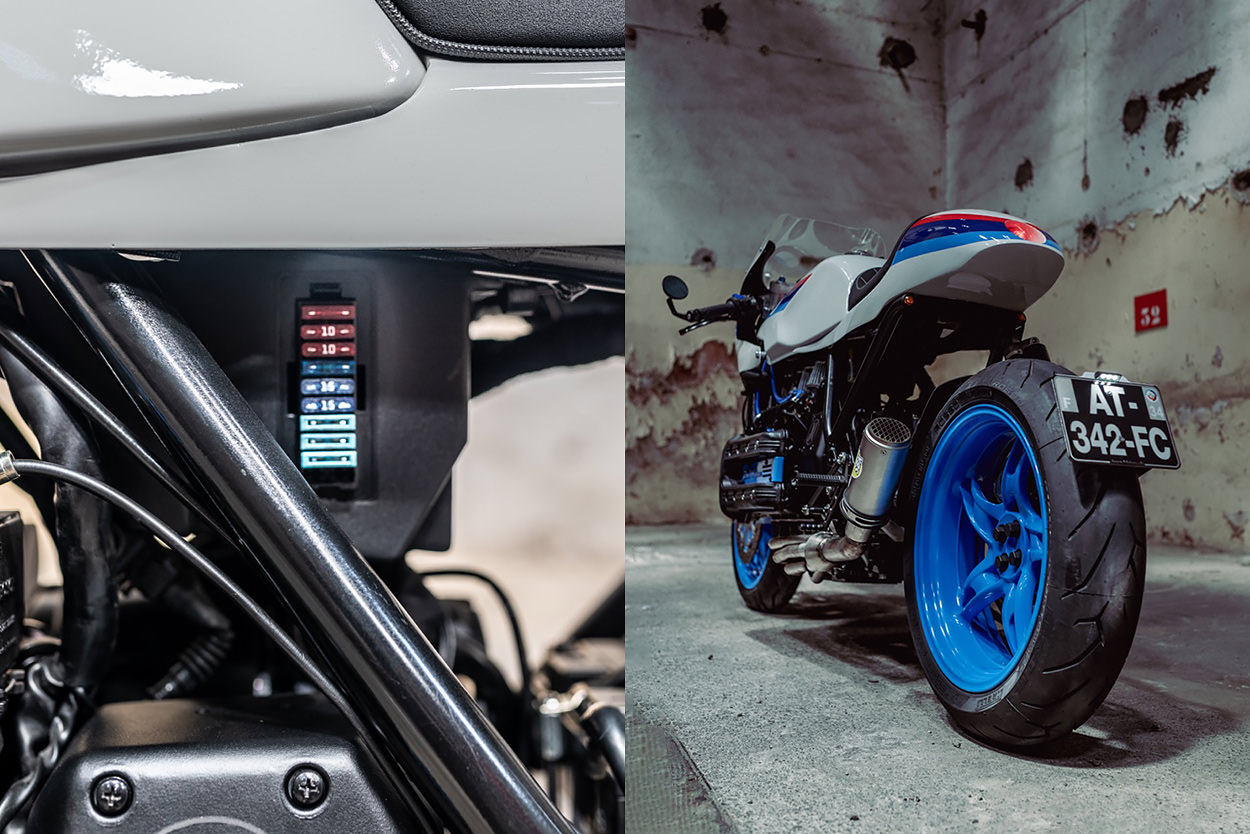 The full list of mods is extensive, so we’d highly recommend hitting the link below. Jeremie left no stone unturned, even going so far as to rearrange the fuses, so that their colors match BMW’s M Performance logo. It’s a little obsessive—but we’re into it. [More]

BMW R65 by Curiosity Moto Because old boxers are so popular, it’s quite possible that there are no more new ways to customize them. But as long as custom builders like Curiosity Moto turn them out as clean as this, we don’t mind.

Based in London, Curiosity Moto was founded by Mark Phillips. They don’t just do custom work though—general BMW maintenance and servicing is part of their portfolio too. So when their client booked this BMW R65 in, it went through a full strip down and inspection before any custom work started. 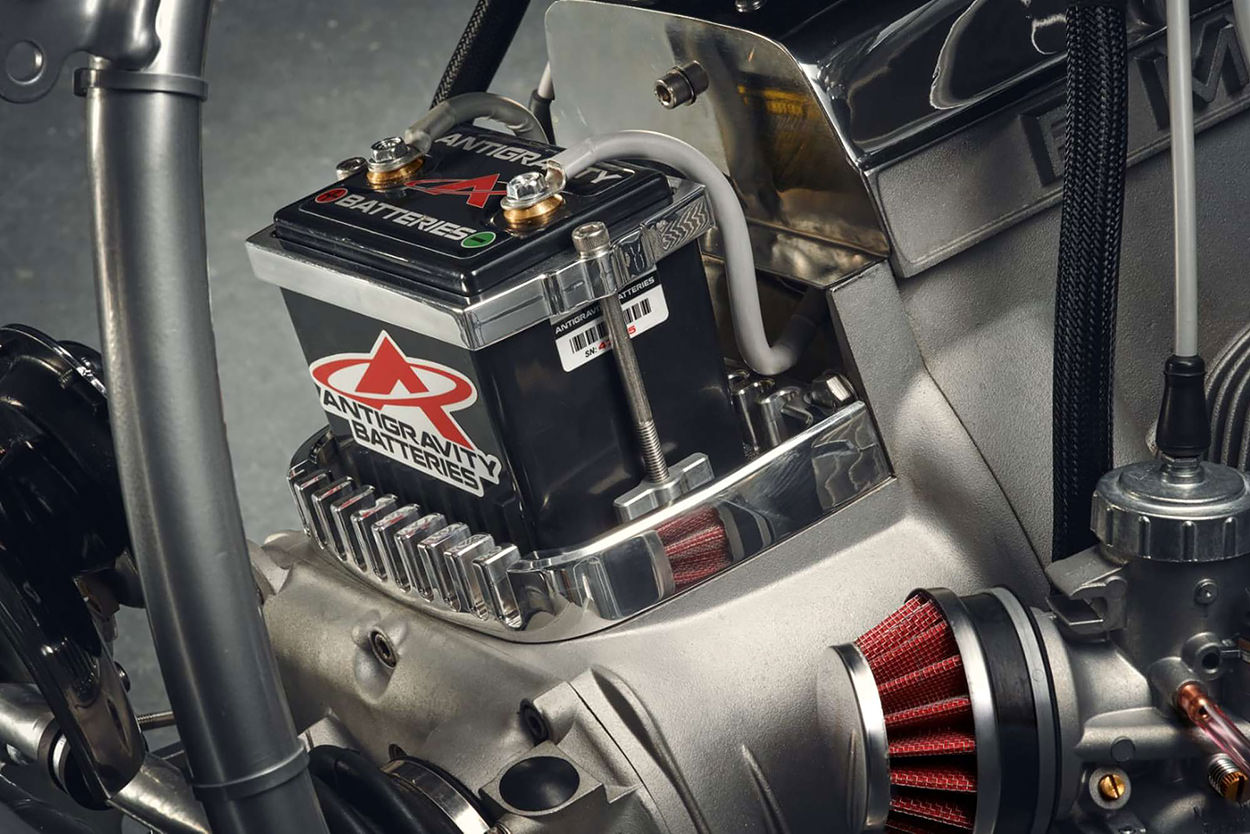 The brief called for a combination of modern components and a vintage aesthetic, so there’s nothing wild going on here, visually. The larger fuel tank comes from a BMW R80RT, while the seat and subframe are custom jobs. This one’s a rider too, so there are fenders at both ends.

Under the hood you’ll find a custom wiring loom, with a Lithium-ion battery mounted where the BMW’s airbox used to live. The motor now inhales through a pair of pod filters, and out through a pair of stainless steel silencers. Other brand new parts include the Hagon rear shocks, front brake discs, and almost everything in the cockpit. 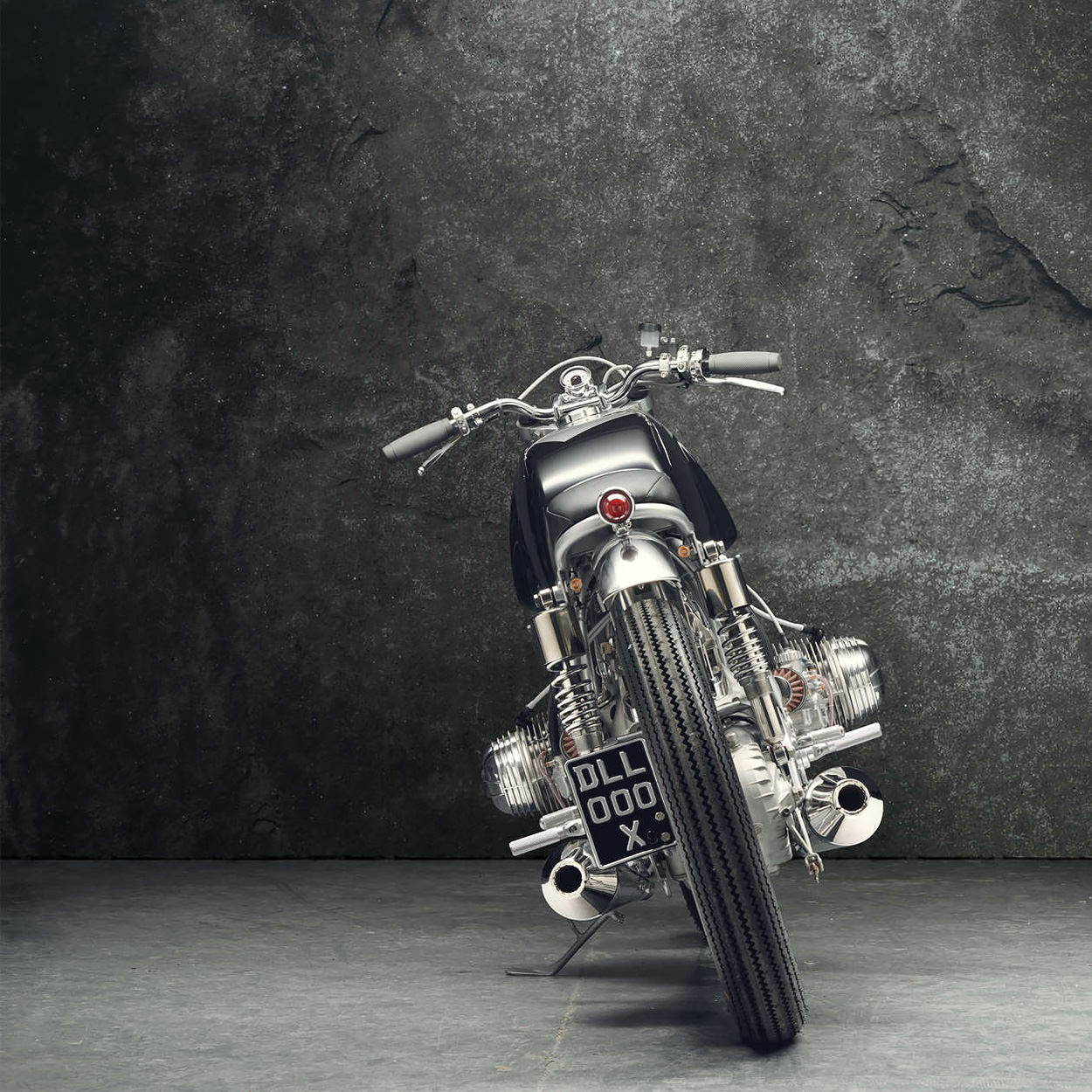 But it’s the finishes that really shine here. The frame was soda-blasted, then finished in silver along with the wheels. The tank wears a glossy coat of black paint, with a delightfully retro BMW motif sprawled over the top.

If it tickles your fancy, get ready to smash that piggy bank—because it’s going on auction with Silverstone Auctions this coming week, here. [More]

Kawasaki Z650 by D/MO How much carbon fiber is enough? For UK-based Jack Donaldson, the answer is “more.”

Operating after hours as Donaldson Motors (abbreviated to D/MO), Jack kicked his latest project off with a 1978 Kawasaki Z650. Over the course of a year, he gave it everything from an engine swap to a full complement of carbon fiber bodywork. And he did almost all the work himself, outsourcing only the powder-coating on the frame and wheels. 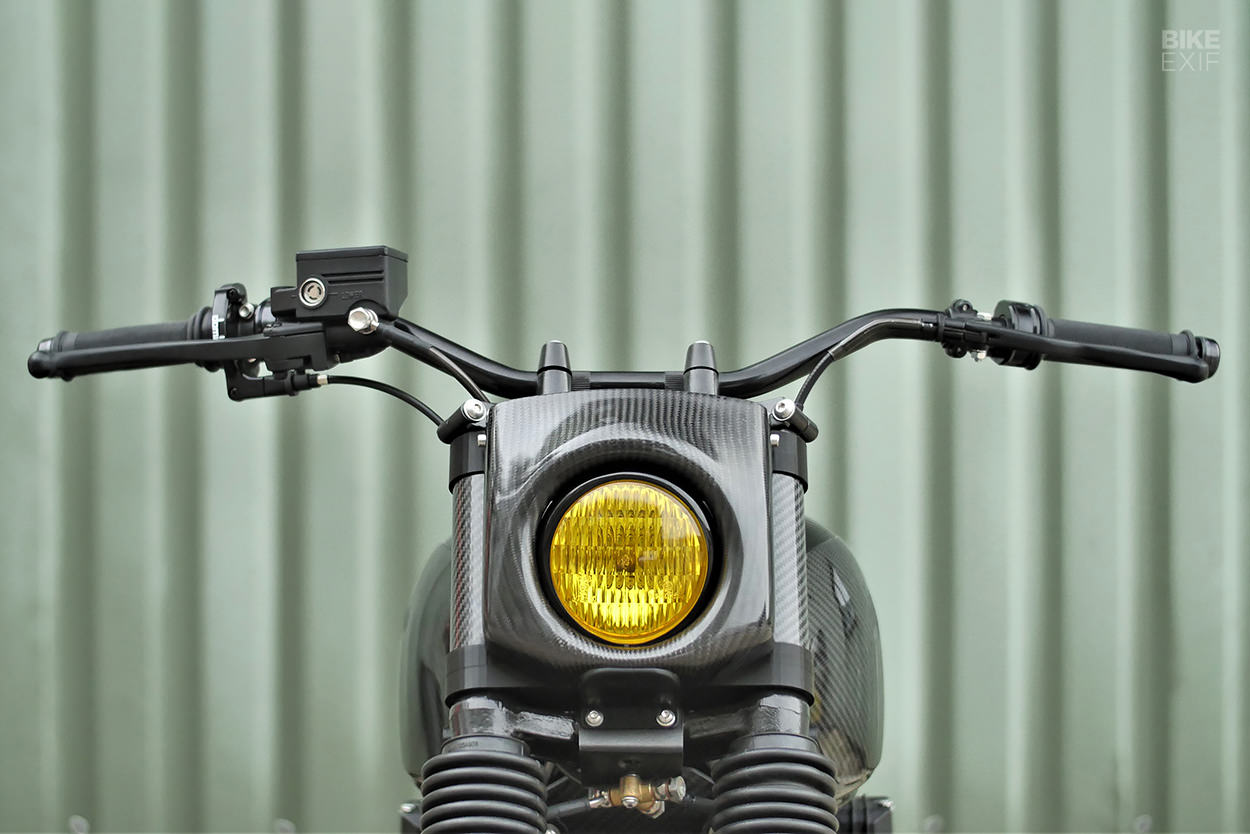 The carbon pieces include obvious parts like the tail section, headlight nacelle and fuel tank ‘skins.’ But the list also covers the front fender, rear splash guard, chain guard, number plate bracket, battery box, and even the torque bars for the rear brake.

By day, Jack works in R&D in the composite industry—hence his affinity for the material, and his ability to shape it. Put together, the new kit gives the classic Kawasaki a burly scrambler-cum-tracker vibe. 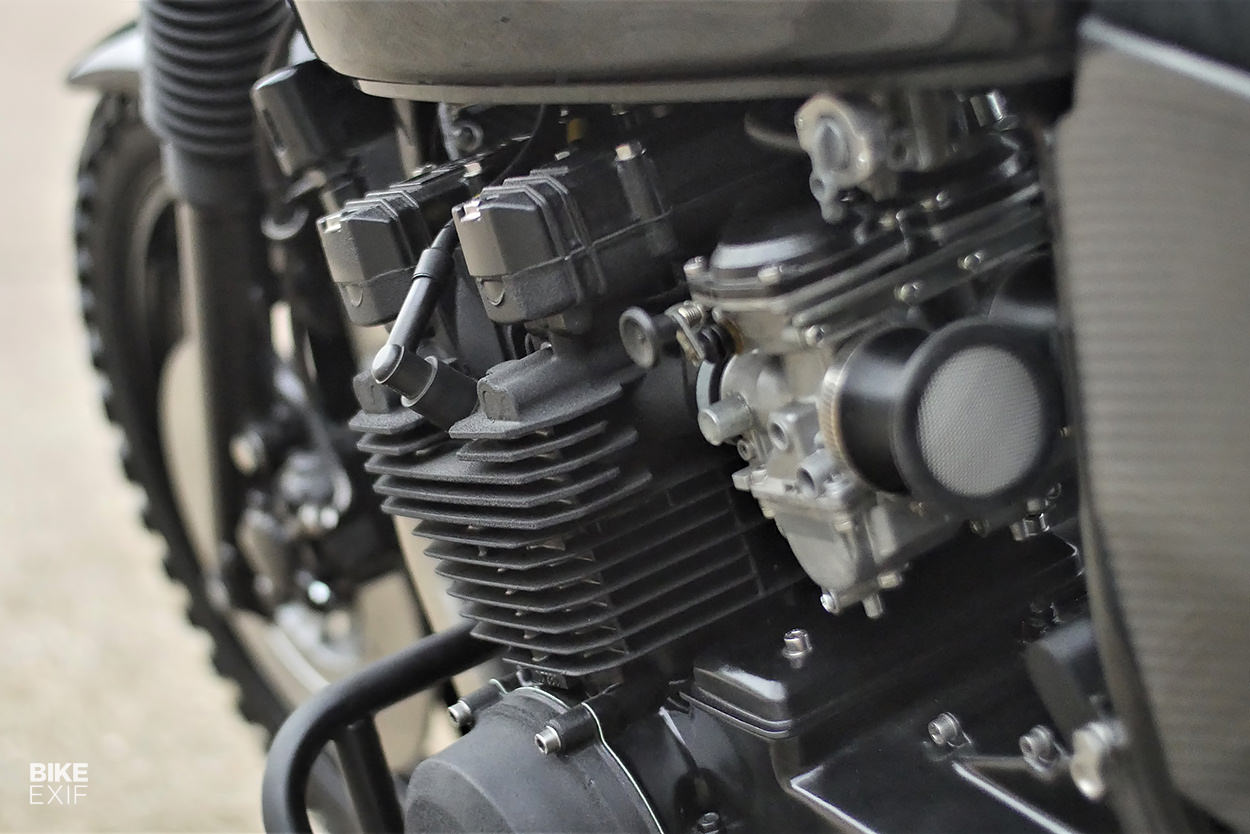 Going deeper, Jack replaced the Kawasaki’s engine with the mill from a 1984 GPz 750 (which is good for 20 more horses in stock form). He also built a four-into-two stainless steel exhaust system, complete with baffle valves to control noise levels. A lever mounted near the rider’s knee opens or closes the valves.

Jack’s seen to the minutiae too. The bike’s been rewired with a whole smorgasbord of Motogadget goodies, accessible via a hidden latch that pops the seat off. There’s also a full array of taillights sunk into the back of the bodywork, built using 3D-printed housings and lenses. 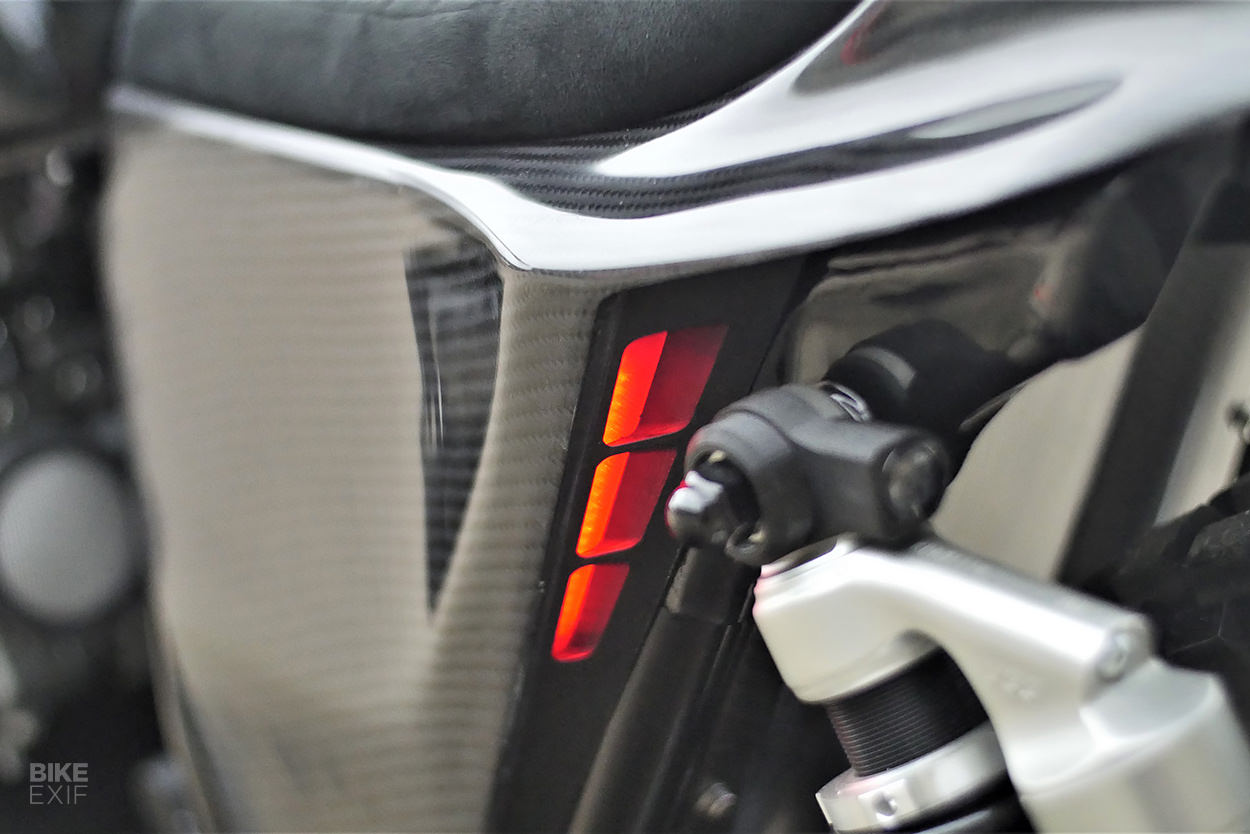 Jack also installed new bars and controls, fresh knobby tires and a set of YSS shocks. A Cerakote treatment on the engine complements the rest of the Kawasaki’s moody finishes, earning it the nickname ‘Blackout.’ [Donaldson Motors | Instagram] 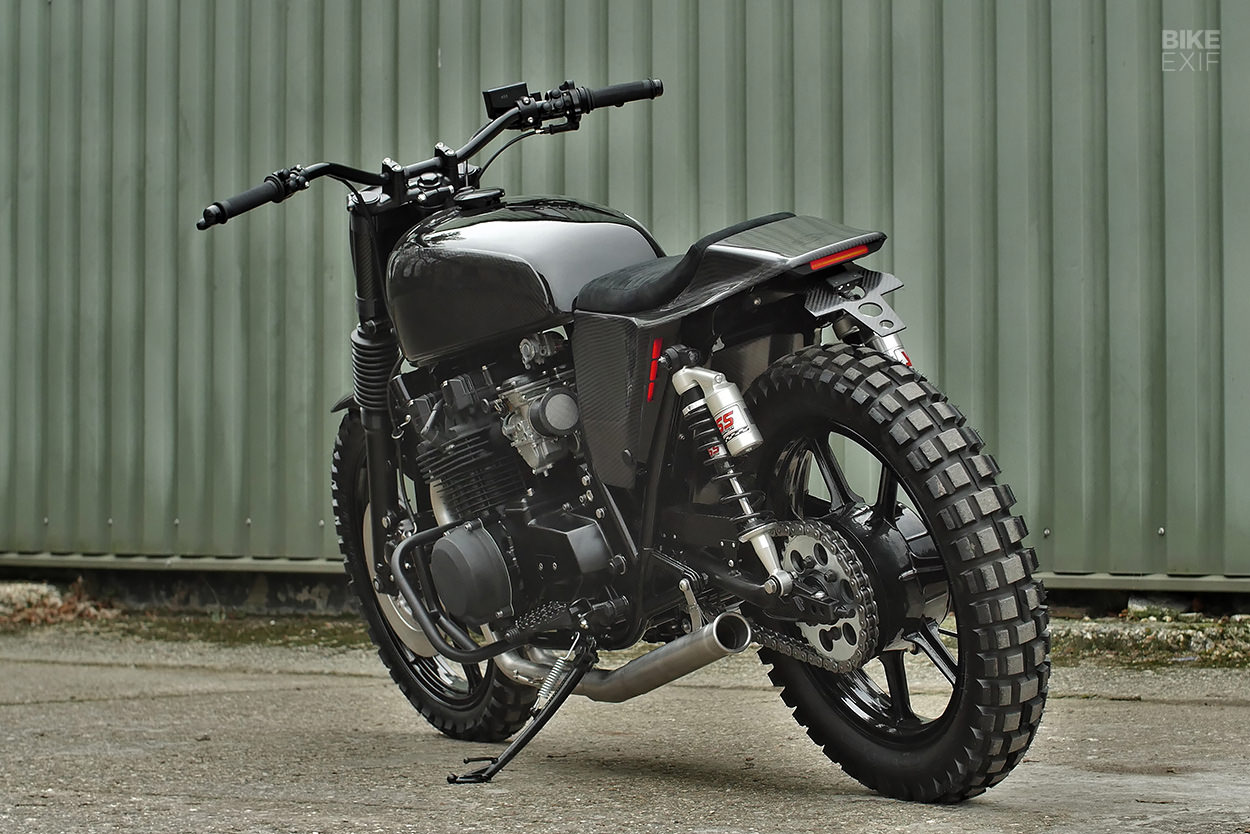