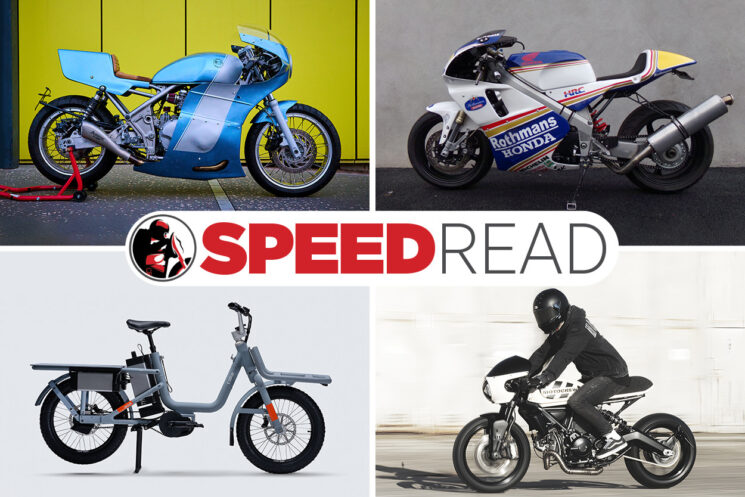 Performance and utility are the words of the week. We kick off with a 1100 cc Kawasaki endurance racer, followed by a farm-built Honda mashup, a street-legal electric utility bike from Cake, and a Ducati Scrambler turned dreamy café racer from Motocrew. 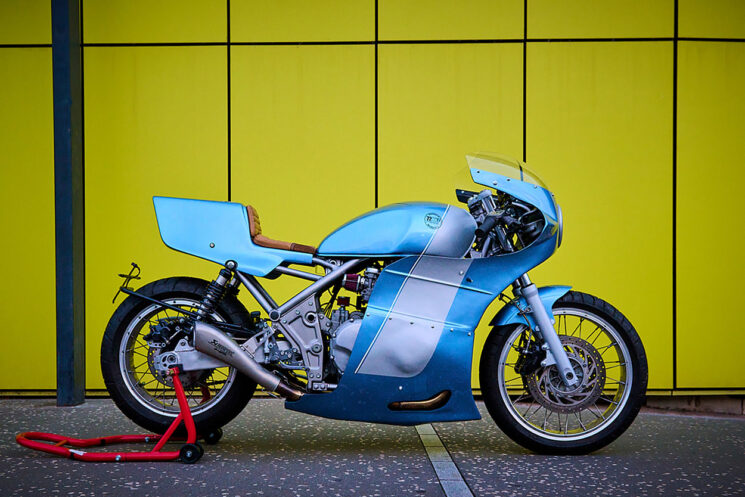 Kawasaki Zephyr 1100 by 72 HKG Performance This Kawasaki café racer project began just like so many before it, with the simple question of “what else ya got?” Jorge and Antonio, the builders behind the Spanish workshop 72 HKG Performance, had taken a small road trip to pick up a project car, when they found this Kawasaki tucked away in the garage, covered with a blanket of unrealized potential. 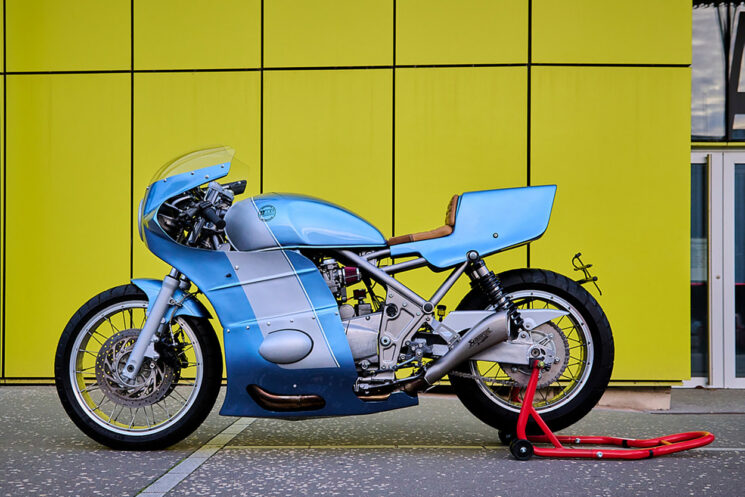 The machine that started its life as a Kawasaki Zephyr 1100 was taken to a shop years ago for a full custom transformation—but it never reached a point that the owner was satisfied with. So after purchasing the project car, Jorge and Antonio loaded up both machines and took them home.

Picking up someone else’s custom build is rarely easy, but it often begins the same way: by stripping everything off. So the guys got to work undoing, unbolting, and bringing the Zephyr back to its bare bones. 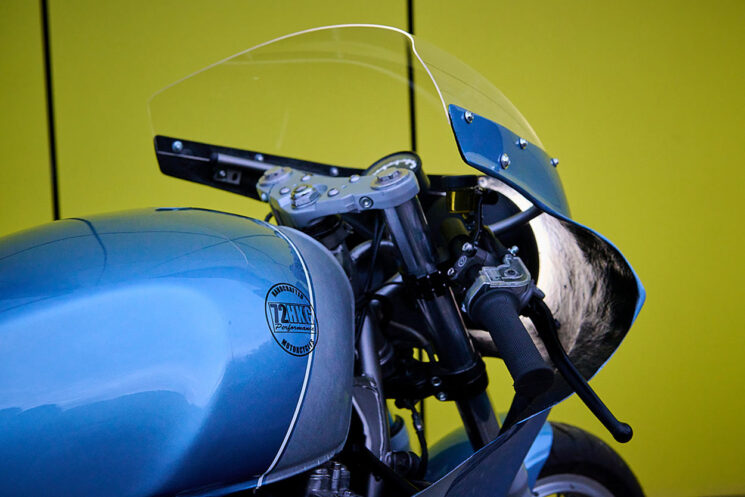 HKG worked with the bike’s owner, going back and forth before deciding on classic endurance racer style for the build, which meant a full fairing. So once the bike was stripped down, the guys fabricated a custom frame to house the bodywork, which would determine the width and remaining lines of the build. All of the hand-formed aluminum bodywork took over 200 hours to create, but fits the build perfectly.

The fairing is formed around the handlebars, with considerations for cooling, the air intake and the bike’s exhaust system. The stock gas tank was modified for smoother lines, with the filler cap removed and replaced. A custom leather seat was made by Senen Leatherworks and attached to the new endurance-style tailpiece. 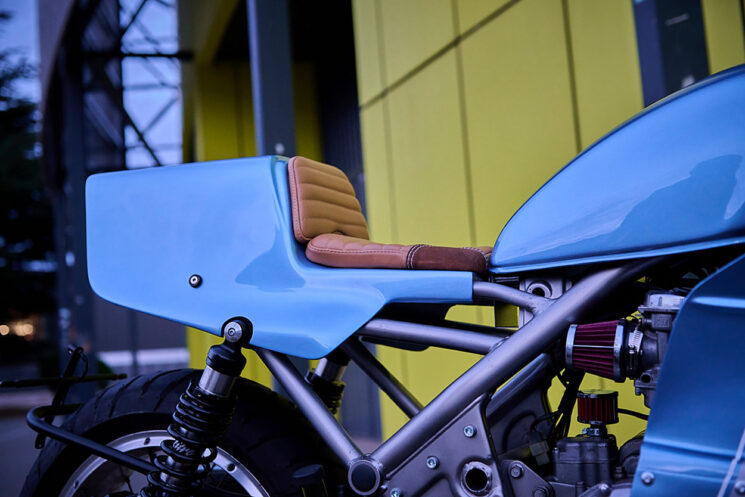 The Zephyr’s 1100cc engine was completely rebuilt, and fitted with small pod air filters and a full new exhaust system, capped with a titanium Akrapovič muffler. As expected, the original owner is finally happy with his custom built Kawi. [Via] 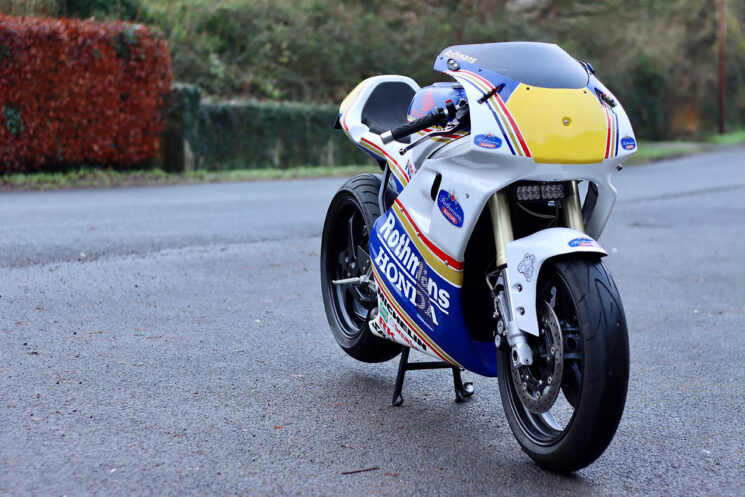 Honda Bros 400/Africa Twin by Jonny Kerins If we had a dollar for every amazing shed-built bike that we’ve featured, well…we might be able to buy a bigger shed. This next build comes from Jonny Kerins, a woodworking teacher from Ireland with an obsession for 80s and 90s superbikes.

Although it looks factory, it features a frame and engine combination that Honda never produced themselves. The chassis comes from a Honda NT400 Bros—a 400 cc version of the Hawk, available outside of the US. But the engine is a 742 cc twin, borrowed from a 90s-era Honda Africa twin. 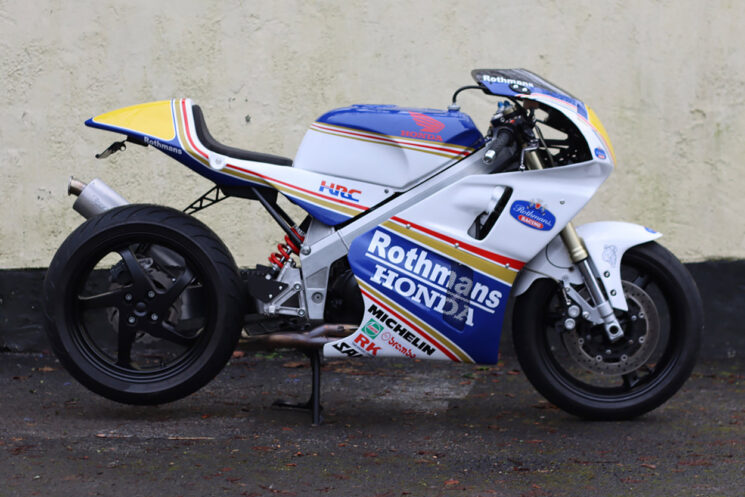 For Jonny, building a Bros 400/Africa Twin hybrid was the result of a long-spanning love for the small Honda platform, and a perfect opportunity at the local moto scrapyard. Years ago, Kerins had owned and restored a Honda Bros 400 for himself, so he was well familiar with the platform, but had always wanted a little more juice for the squeeze. So finding a Bros chassis and an Africa Twin engine got his wheels turning.

With the right amount of finesse, he could harness the additional power of the Twin’s bigger engine in the chassis he had loved so much—and of course, all in the early superbike style that he loves so much. Coincidentally, he picked up the project just as a global pandemic shut the world down, giving him plenty of time to work on it. 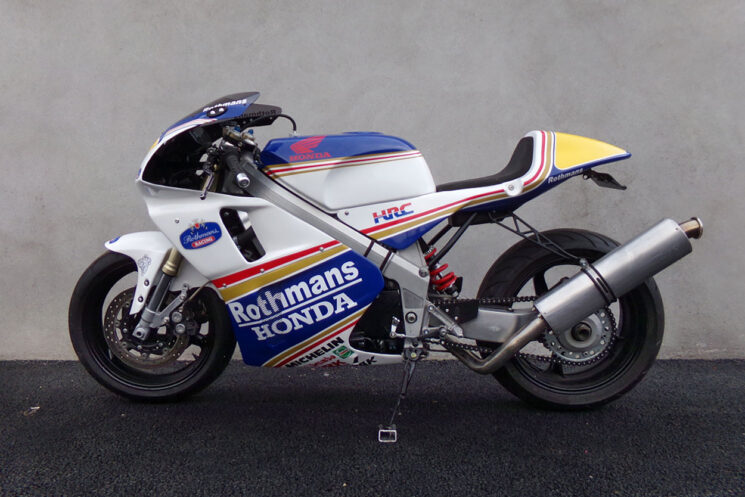 The Bros chassis was equipped with a handful of high-performance parts from various machines. Forks from a Yamaha R1, wheels off of a Honda VFR, and bodywork from various Honda models were modified to fit. A custom exhaust, subframe and fairing brackets were all fabricated in-house.

Jonny even painted the bike himself, in the classic Rothman’s Honda livery. Buttoned up, it looks like a classic Honda racer from an alternate universe. [Via] 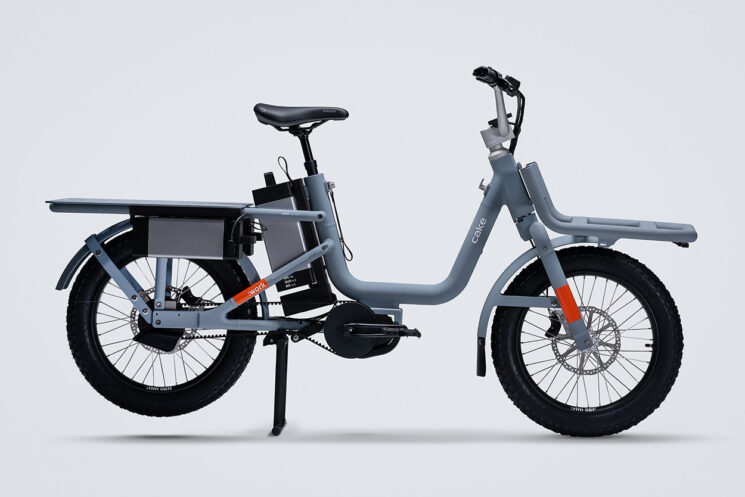 Cake Åik e-bike CES is one of the largest tech events in the world, often hosting some of the year’s largest announcements. This year we see Cake, manufacturer of electric motorcycles, announce a new addition to its lineup for 2023: a street-legal utility bike with extensive range and no required registration.

The Cake Åik is essentially a step-through eBike equipped with a variety of tools to help stow, tow, or carry loads. Sure, it’s not technically a motorcycle—but it is an interesting take on utilitarian two-wheeled transport. 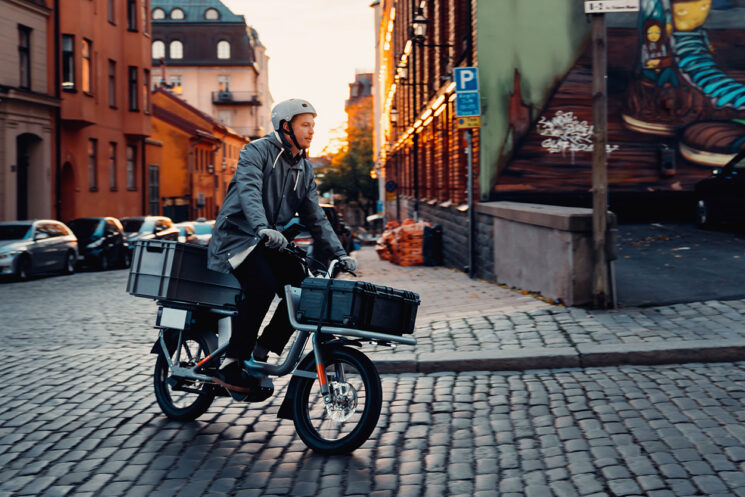 The Cake Åik is built around a forged 6061 aluminum frame with a mid-mounted motor providing 100 Nm of torque through pedal assist. An automatic and stepless Enviolo Extreme gearbox on the rear wheel promises smooth shifts, to optimize power output and maximize battery life. 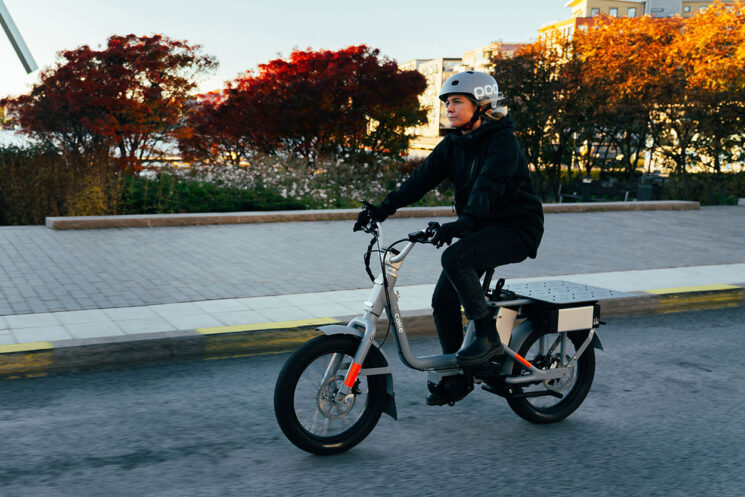 For moving large loads, Cake offers a variety of racks, saddlebags, trailers, passenger seat, and more. Cake claims the rear rack can handle a load of up to 60 kg [132 lbs], while the front rack can take up to 20 kg [44 lbs].

If you like the look of the Cake Åik (and have some stuff you need to haul around), it’s available to order now on Cake’s website at a starting price of $6,470. 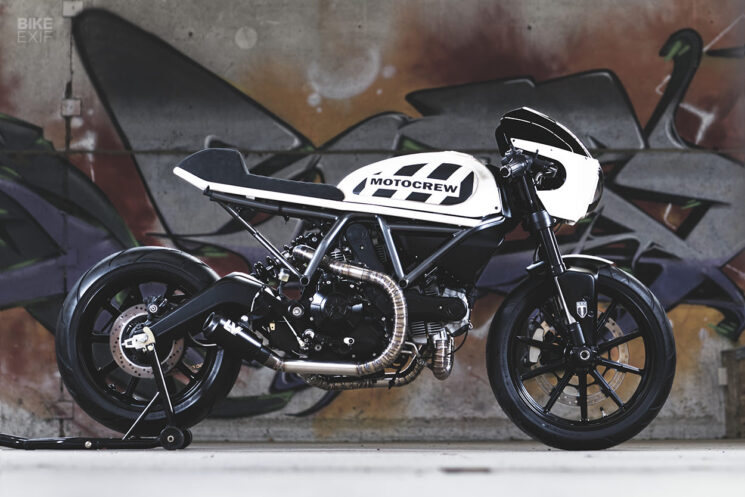 Ducati Scrambler by Motocrew Ducati’s Scrambler has proven itself to be both versatile and capable as a custom platform. From scrambler to desert sled to café racer, Ducati has done a wonderful job of highlighting what this platform can do—and the custom world has run with it.

The latest Ducati Scrambler to bless our inbox comes from Chris Scholtka at Motocrew. The mission began with the seemingly basic objective of building a customer’s dream bike. The only challenge is that the customer stands nearly two meters tall—and the Scrambler is compact. 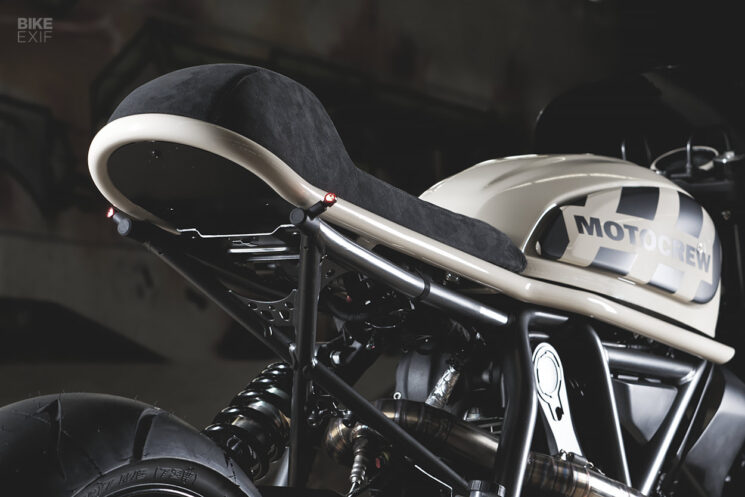 To give the bike more of a traditional café racer vibe, a small fairing was mounted directly to the bike’s upper triple tree. The stock gas tank was mounted higher up to line up with the new bolt-on subframe, which also helped with fit by lifting the seat height. The custom rear shock, made by Black T, is 3 cm longer than stock, also contributing to the taller fit and aggressive forward-leaning line of the bike.

Perhaps the most dramatic feature is the custom-fabricated exhaust system, extending from the cylinder heads like lobster scales, and snaking down toward a short Leo Vince muffler. As this bike is designed for daily use, the Scrambler’s frame was cleaned up with small Motogadget turn signals, and a license plate mount bolted on near the bike’s axle. 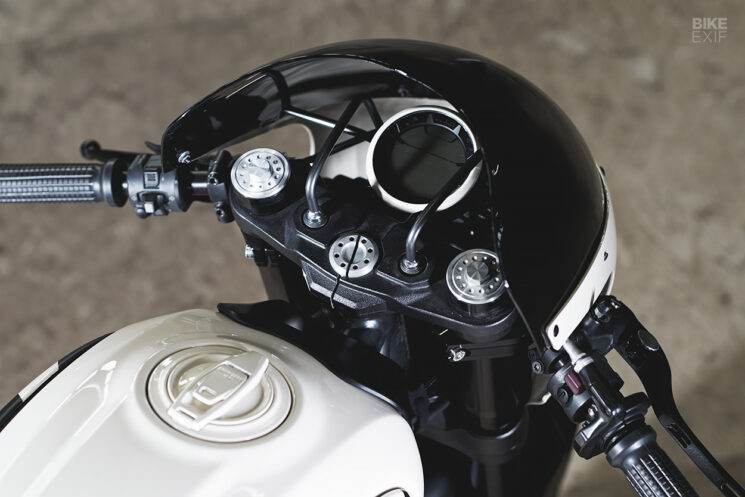 The final cap on this build is a paint job inspired by Porsche’s Cream White, further contributing to the bike’s classic feel. As for the signature Motocrew chevron motif on the Scrambler’s swappable tank panels, that was done with a vinyl wrap, so that the customer can easily change it in the future if he wants to. [Motocrew | Images by Sascha Nagel] 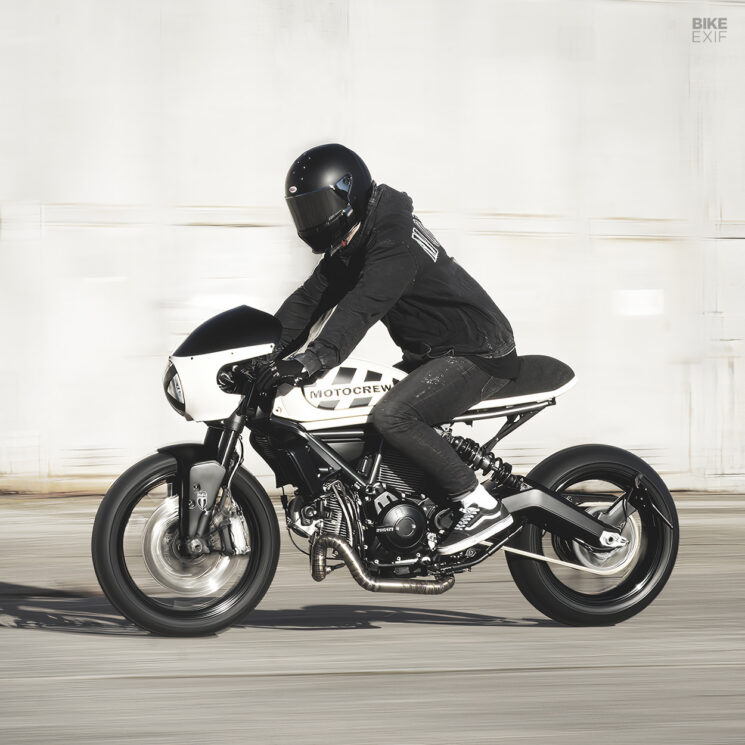