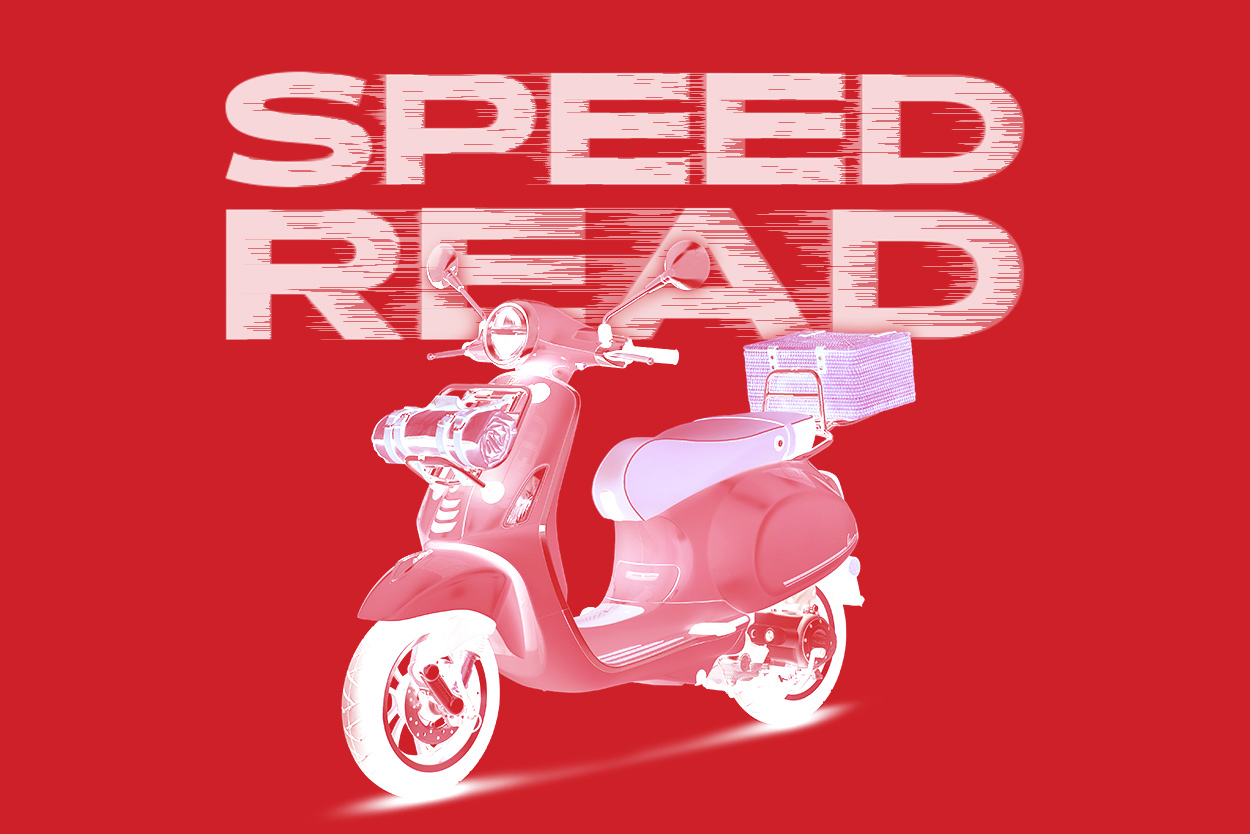 Fancy a picnic? Vespa has you covered. And in other news, an Indian Chief bobber that debuted at Wheels & Waves, a Honda Monkey dustbin racer, a Harley-Davidson Sporty from France, and a Triumph Speed Triple with a Honda RC30 vibe. 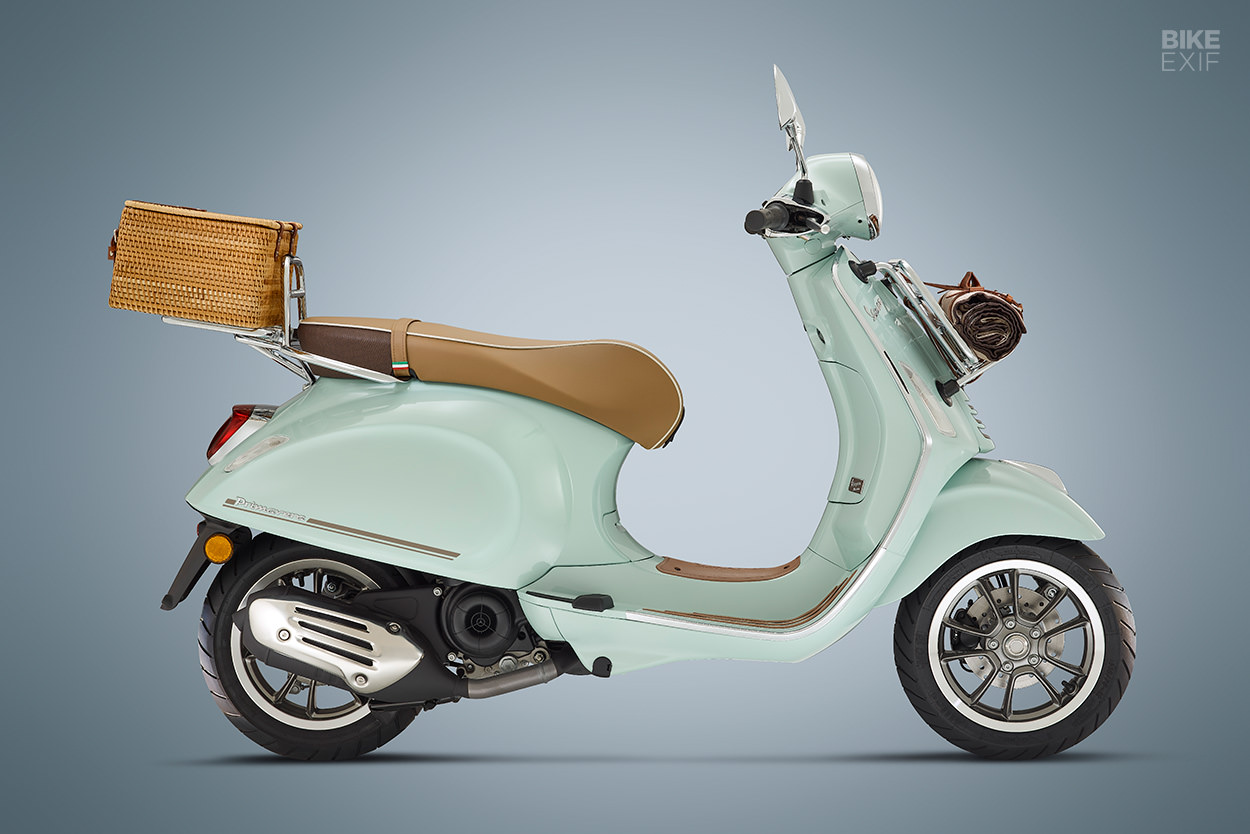 Vespa Pic Nic As if scooters couldn’t get more fun or utilitarian in nature, Piaggo has gone and done this—the new Vespa Pic Nic. As you can guess (and as the name suggests) this limited edition Vespa Primavera 150 is all about getting away on two wheels and enjoying the great outdoors.

For an extra dose of Italian flair, details include brown highlights, chrome luggage racks and special wheels. Fitted front and rear, the new luggage racks are designed to carry everything you’ll need for a luncheon, brunch-eon or any other ‘-eon’ you desire. 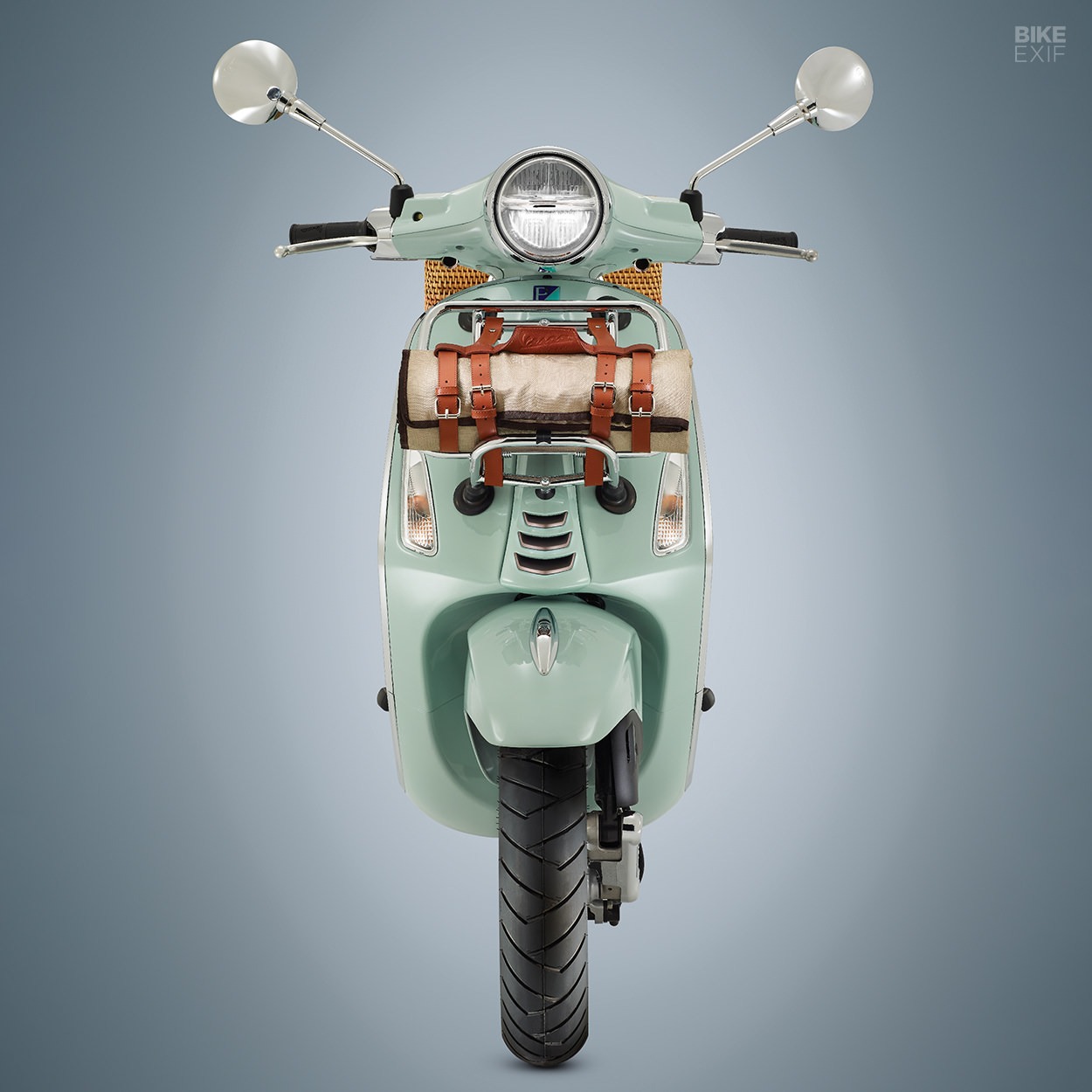 Up front is a picnic blanket secured with brown leather belts, with a fully stocked picnic basket at the rear. The wood and rattan basket comes complete with cutlery and crockery sets, and a custom-fitted Vespa cooler bag for your foodstuffs.

The two-tone saddle is more than long enough for two, and, being a Vespa, there are plenty of storage pockets for helmets and electronic devices. Chrome-plated bodywork strips, and grey wheels with diamond-colored edges, are also included in the Pic Nic package. 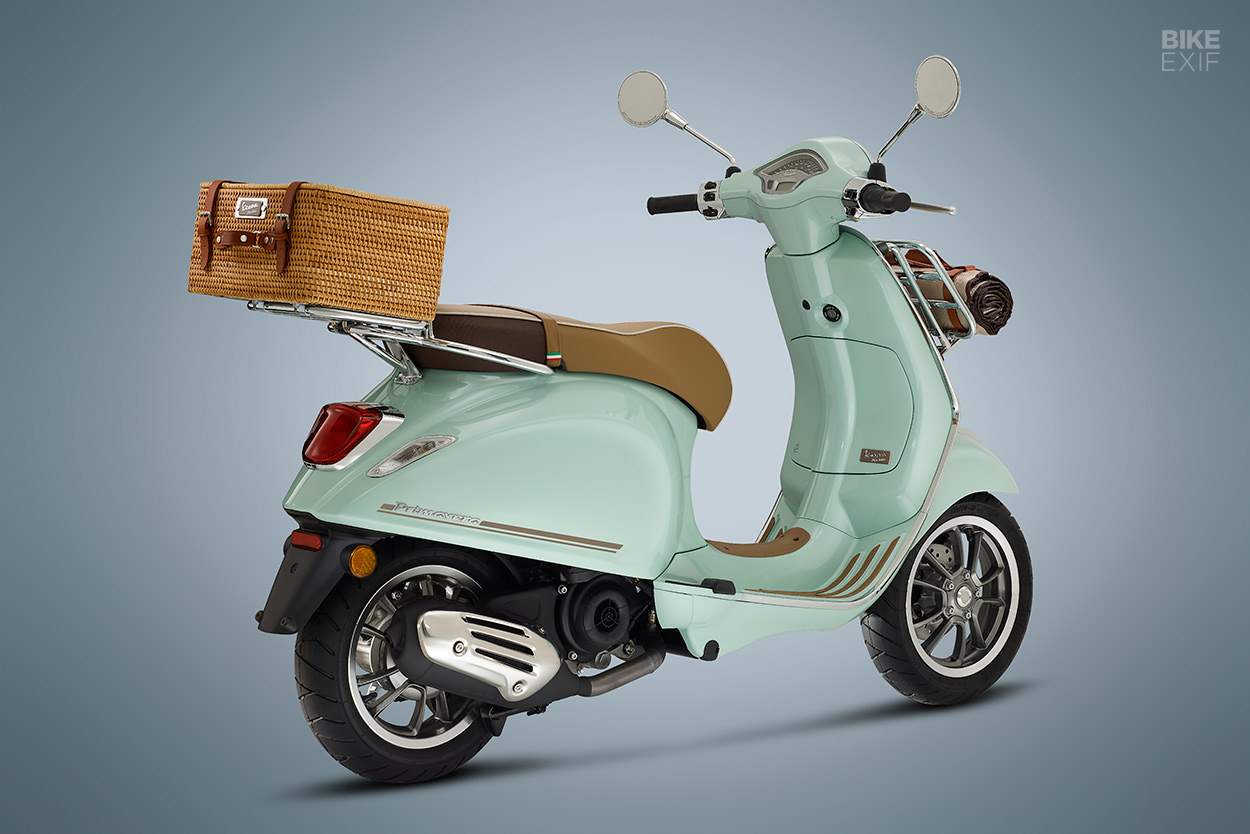 It looks decidedly vintage, but being a modern Vespa you’ll be able to cruise in comfort and peace of mind. LED lighting, a fuel-injected 150cc motor and ABS are certainly a far cry from your grandad’s old Vespa.

This screams fun, and is just begging you to get out and explore with your friends or significant other. Molto bene! [More] 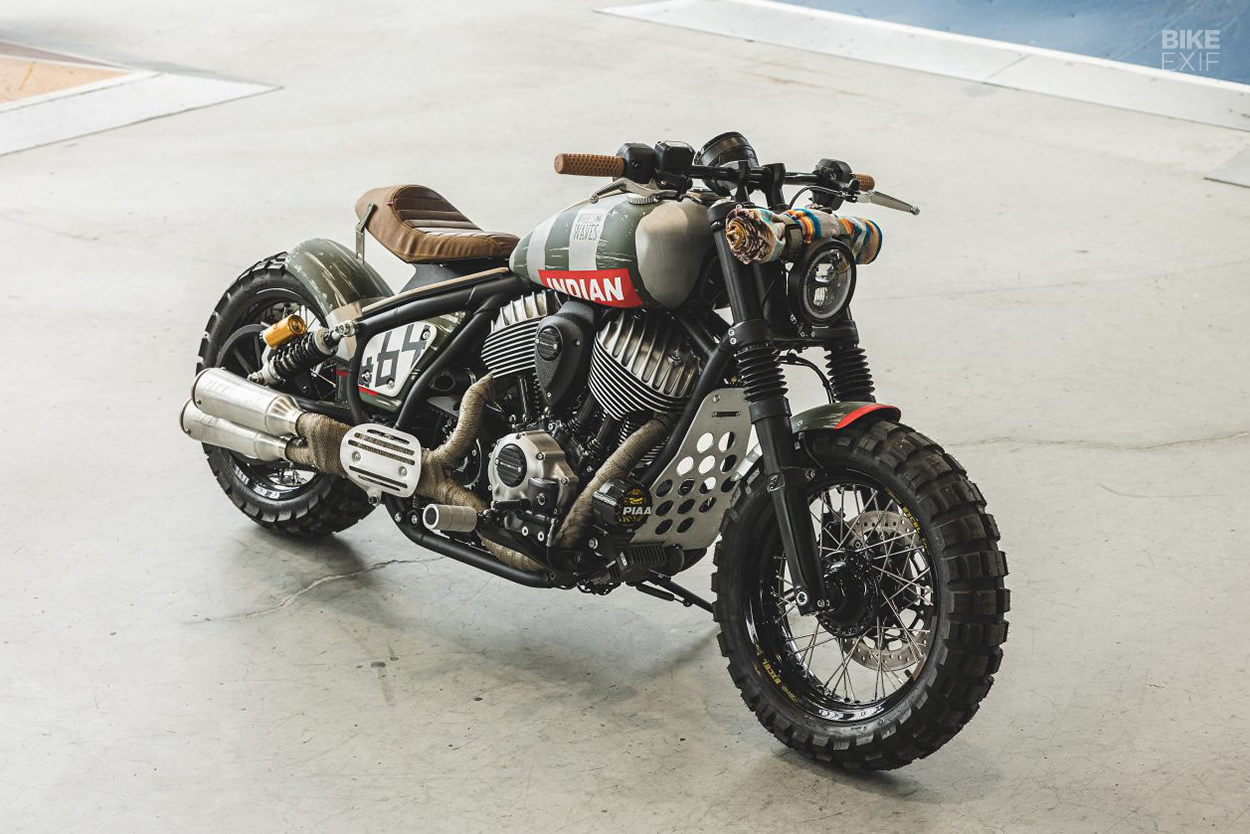 Indian Chief by Tank Machine x Rise Designs Next up is another bike with a blanket belted to the front of it. It’s just slightly different from the last one, though. This brand new Indian Chief was designed and built for Wheels & Waves, the motorcycle, surf and skate festival held annually in Biarritz, France.

Dubbed ‘Grind Machine,’ this bobber was designed by Clément Molina from Tank Machine, in partnership with Antonin Bazin of Rise Designs. Wheels & Waves had teamed up with Indian Motorcycles to commission four European bike builders to submit designs for an Indian Chief. 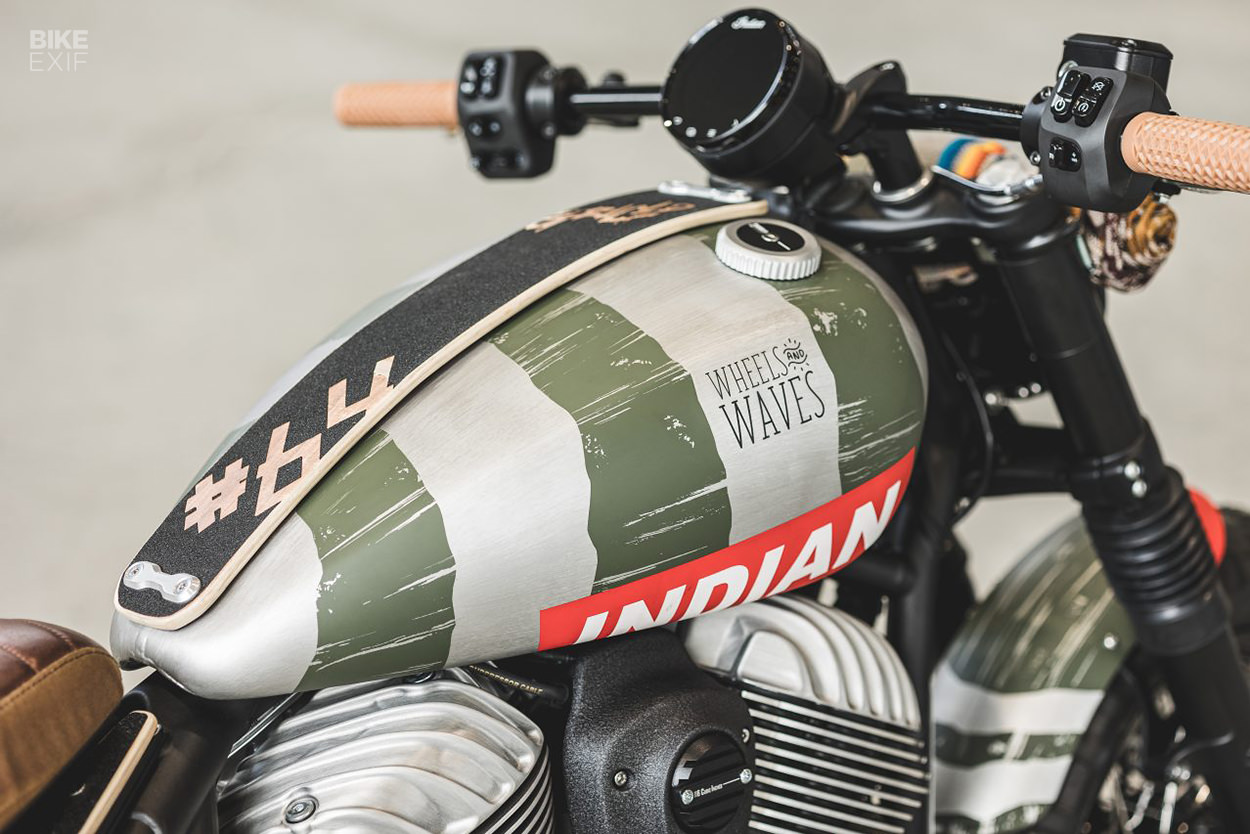 Grind Machine was voted as the top-ranked design by the public and a panel of ‘super voters,’ and set to be built for the upcoming festival. With just three months to go, Clement and Antonin had their work cut out for them.

Starting with a factory fresh Indian Chief, the design was based on board culture and the skate aspect of the festival. This is reflected in the central tank detail which was made out of a skateboard deck. The foot pegs look like something straight off a BMX bike, and there is a grip tape detail under the new single seat. 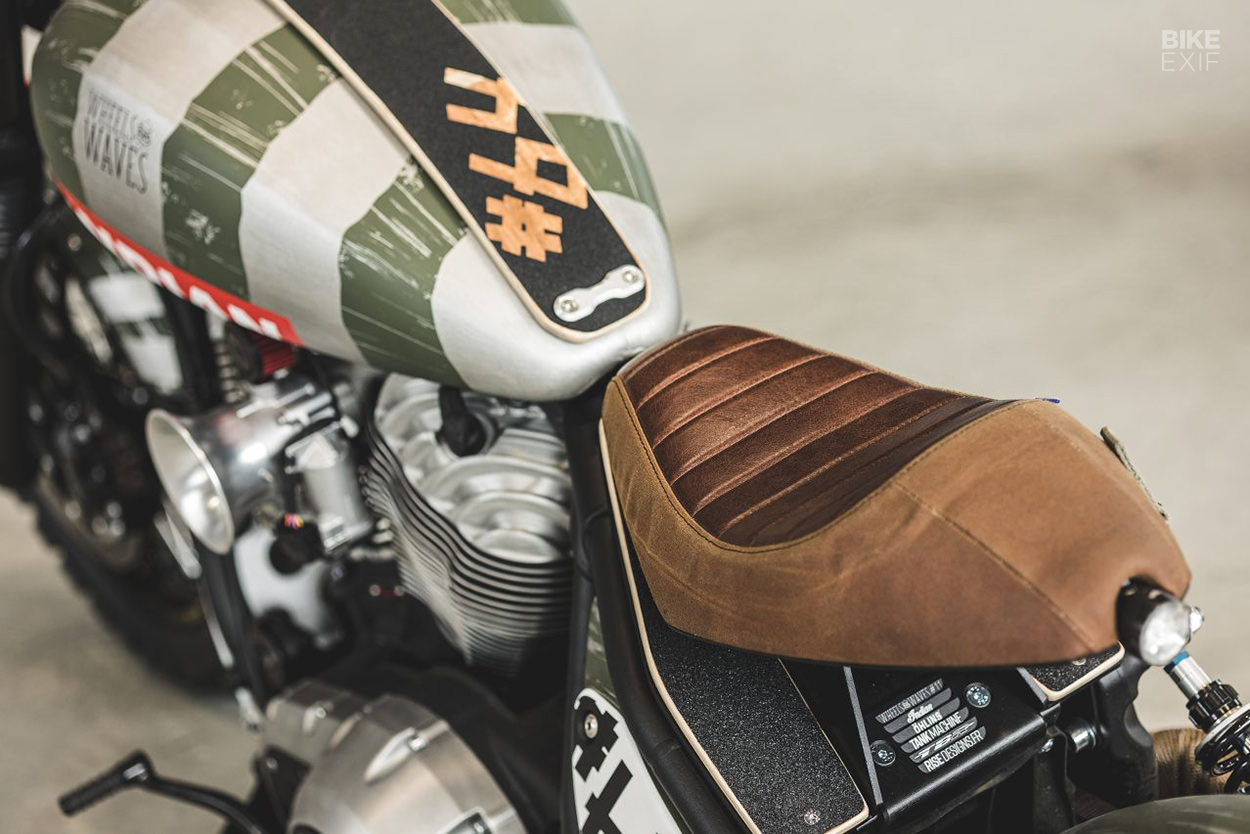 There isn’t a lick of chrome on the whole bike, with Clement and Antonin instead opting for wrinkle black paint and raw, brushed finishes. This gives it a decidedly modern, mean feel. Continental TKC80 adventure tires adorn the bike, and while this would certainly make it interesting to ride, it does add to the aggressive styling.

When the bike was unveiled to an adoring audience at the Artride exhibition it was also presented to its new owner, Fabien Orquin. Fabien was one of the people who voted for the design, and by doing so he was entered into a draw, which he won. 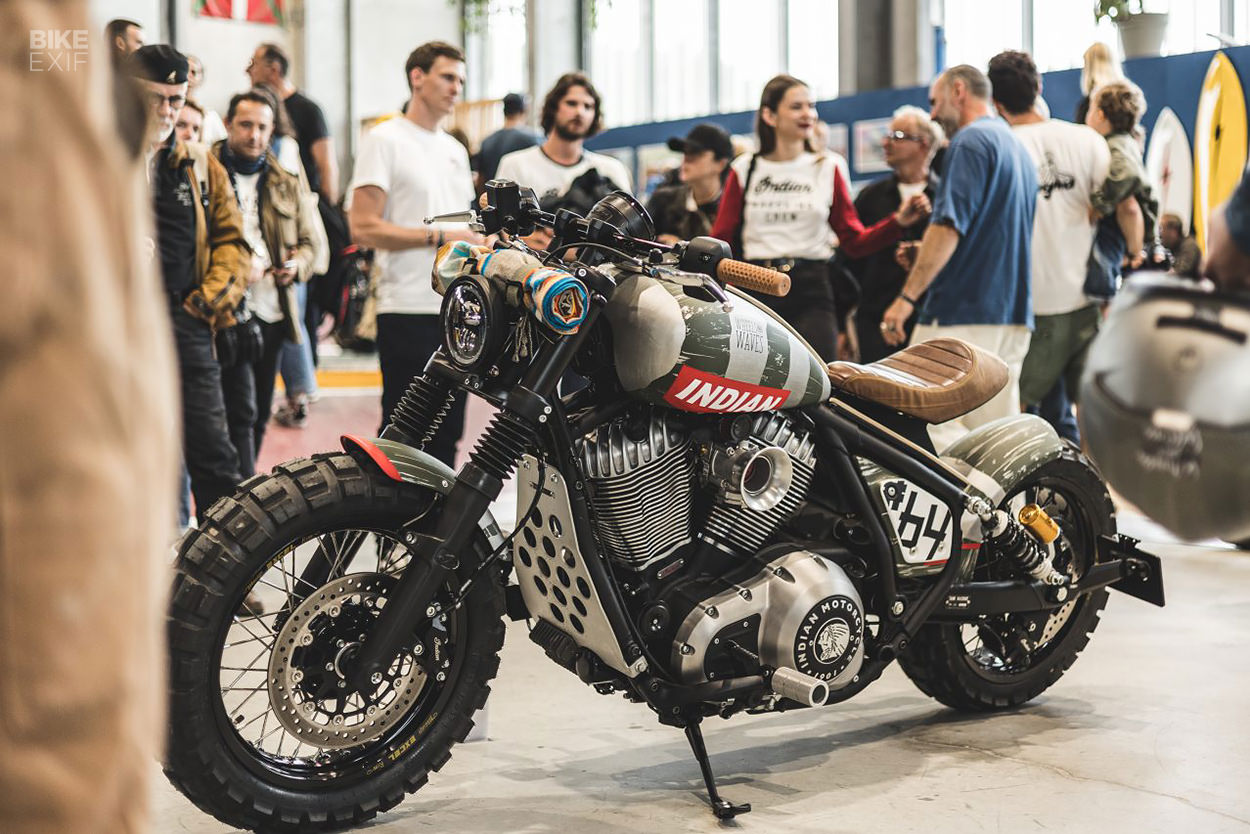 Along with the bike, Fabien won a VIP trip to the 2022 festival where he saw his new bike, in person, for the first time. Lucky guy indeed! [Indian Motorcycle | Tank Machine | Images by Thomas Cortesi] 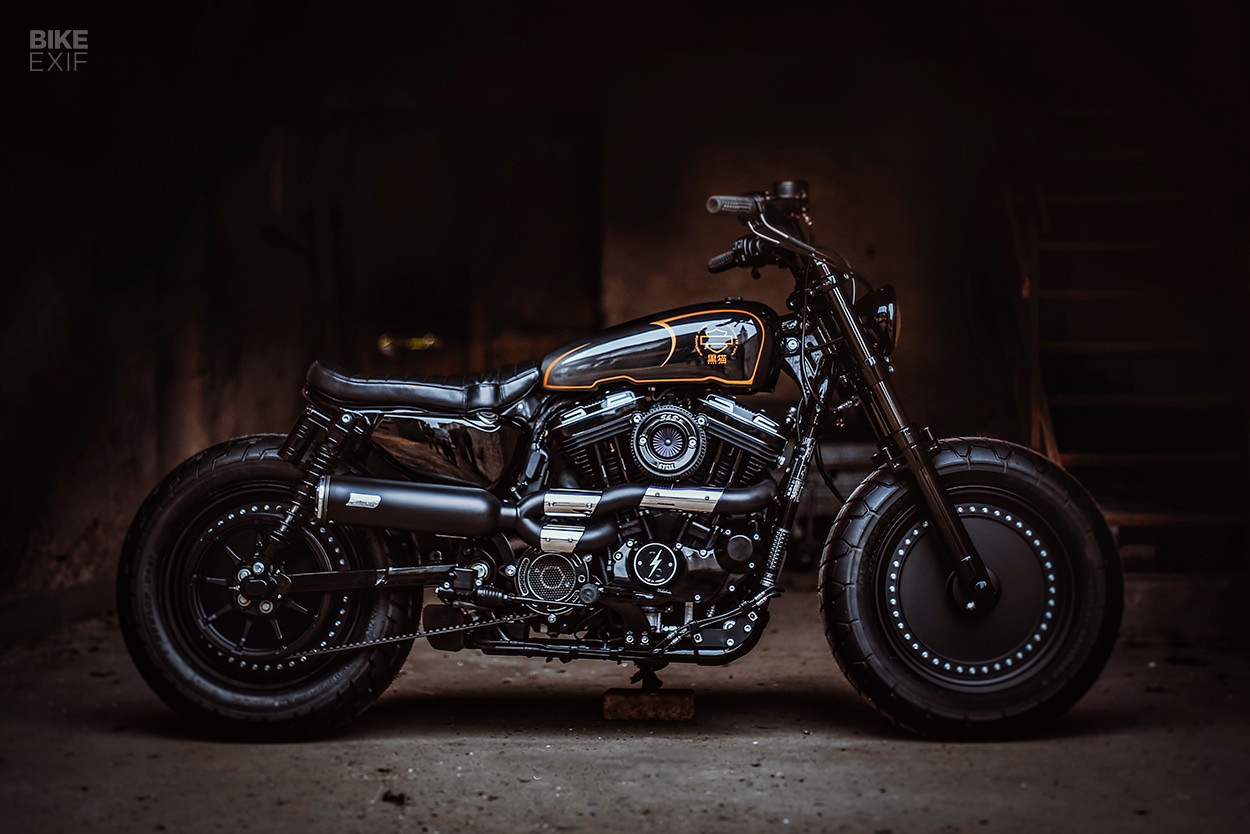 Firstly, there are the chunky Harley Davidson-branded Dunlop tires wrapped around a set of solid wheels from Rick’s in Germany. The front guard has been discarded, with only a fork brace left to keep the front taut. 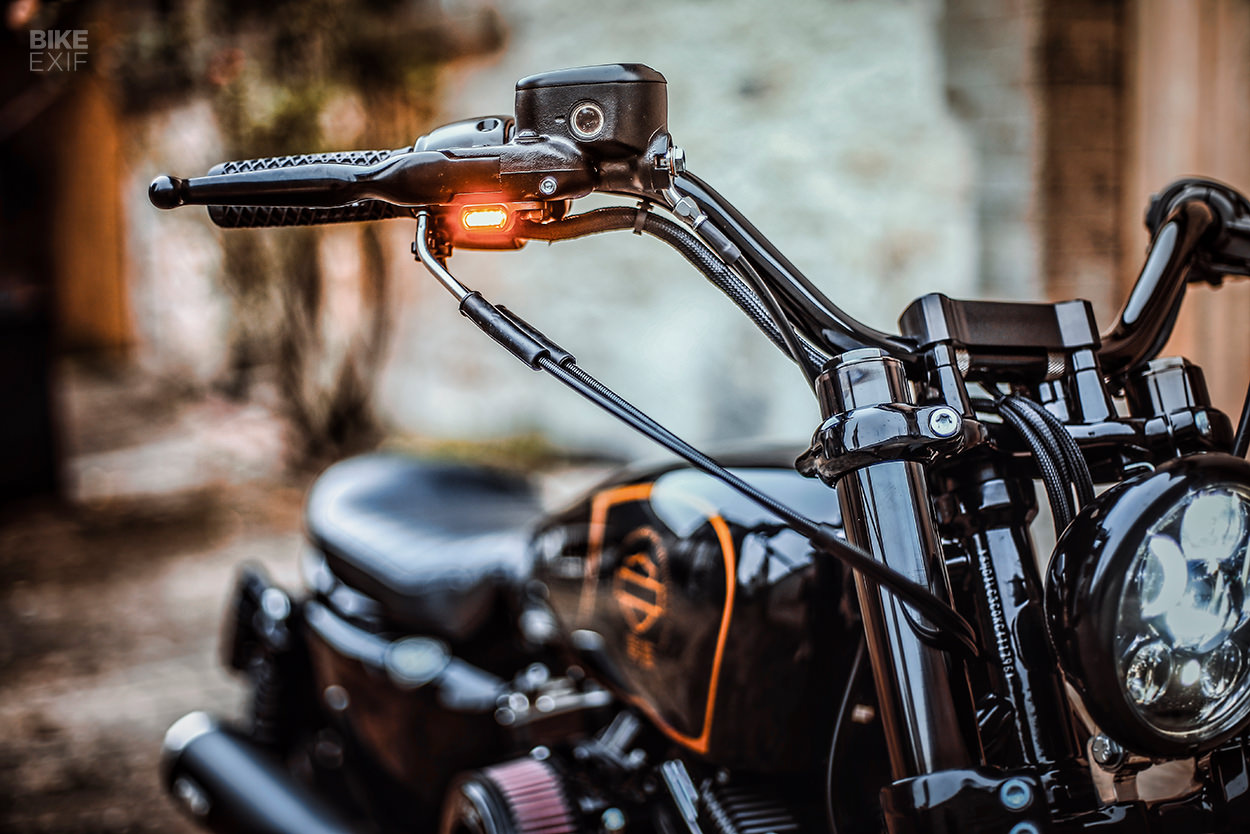 The whole front end has been blacked out, even the fork tubes. This theme has been continued throughout the whole bike with only a few touches of chrome to break things up.

An LED headlight is perched in front of new handlebars, with Highsider indicators cleverly hidden under the brake and clutch levers. A Motogadget Motoscope Mini speedo sits in between the bars, recessed into the riser clamp. 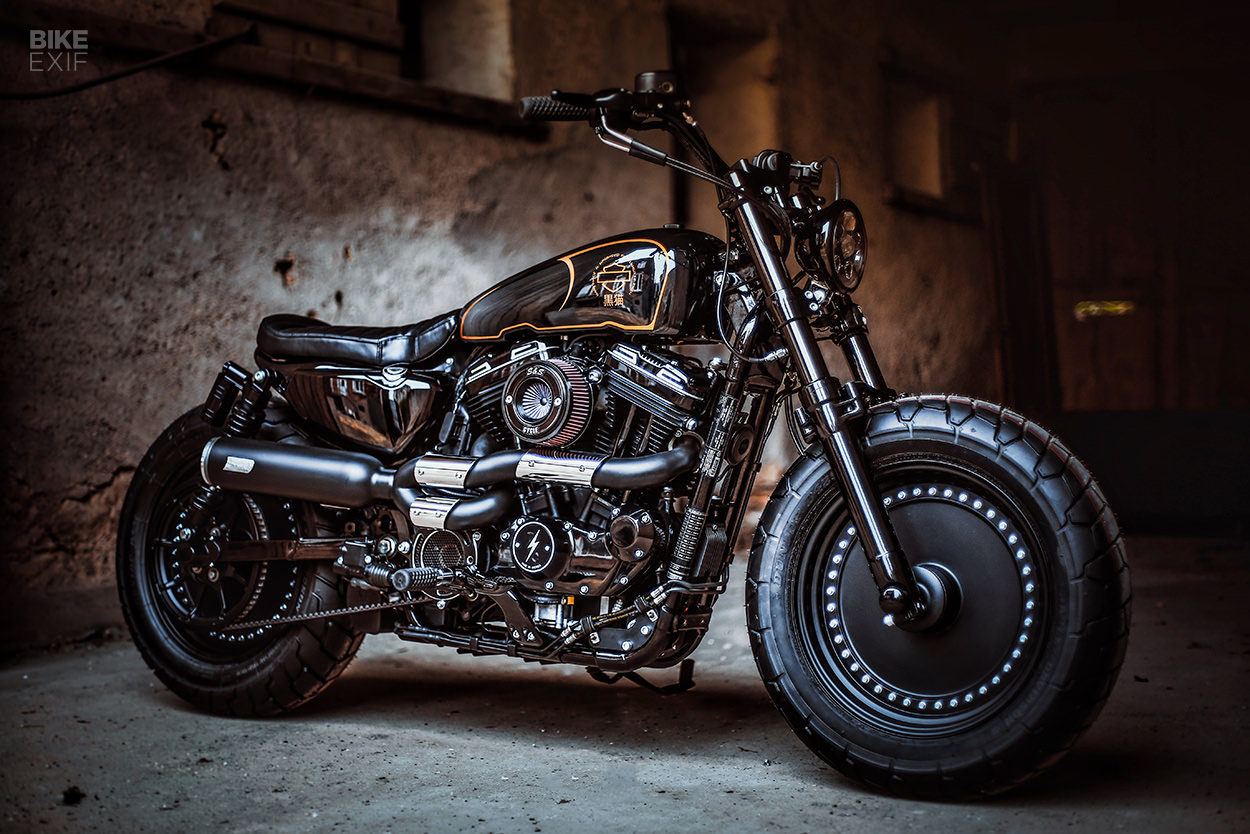 The centerpiece of the build (quite literally) is the new tank, built by Guigz Kustom. The bottom face is notched to accommodate the aftermarket rocker covers, and this detail is highlighted by gold pin striping, another stunning touch.

Guigz Kustom also built the single seat, and the aggressively shortened subframe. Recessed into the rear loop are the tail, brake and indicator lights. Longer shock absorbers from ODC jack up the back end for a sportier ride (get it?), sitting in front of a scrambler-style high mount exhaust pipe. 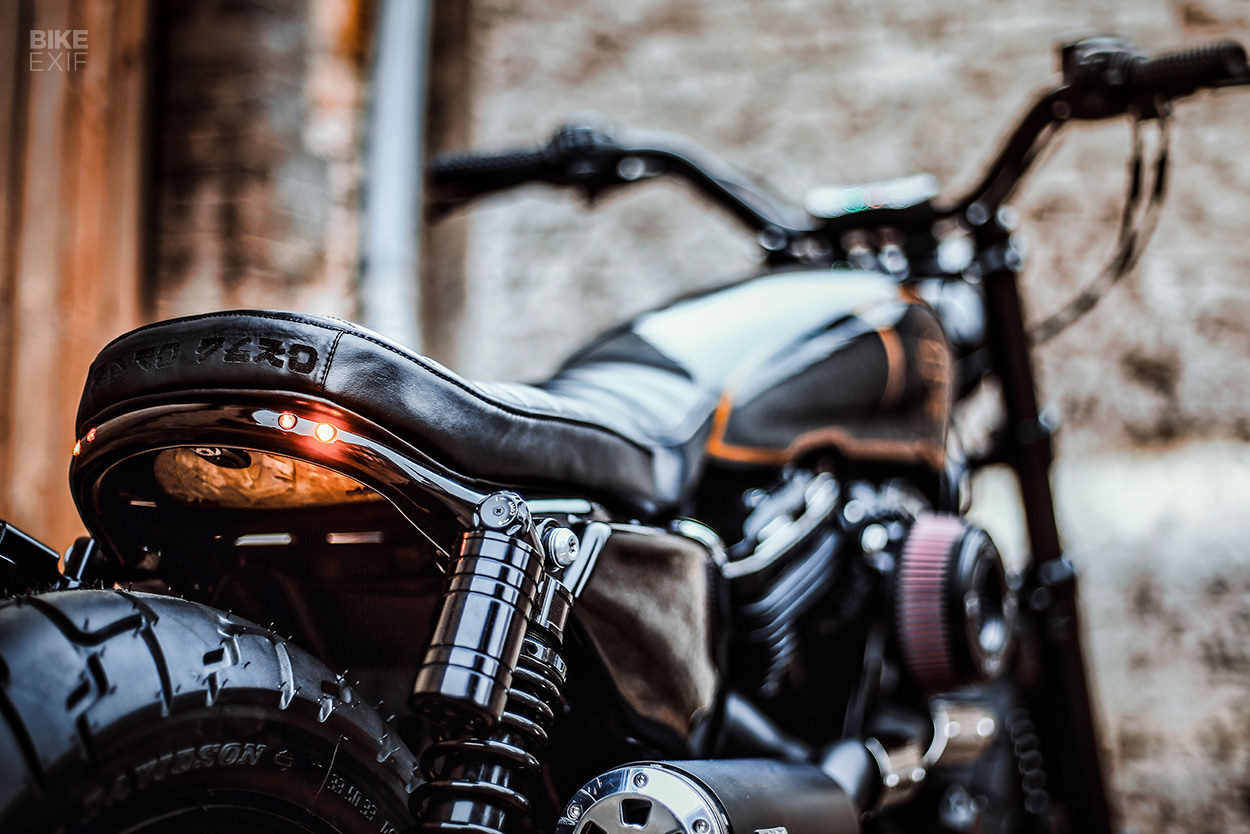 Bloody’s Paint handled the paint job, while La Scarpa tackled upholstery. Milwaukee Twin also swapped the motor for a brand new Sportster mill, upgrading it with an S&S intake and a remap.

Blacked out and bobbed, this is one mean street bike. [Milwaukee Twin Custom | Images by Anastasia Denise] 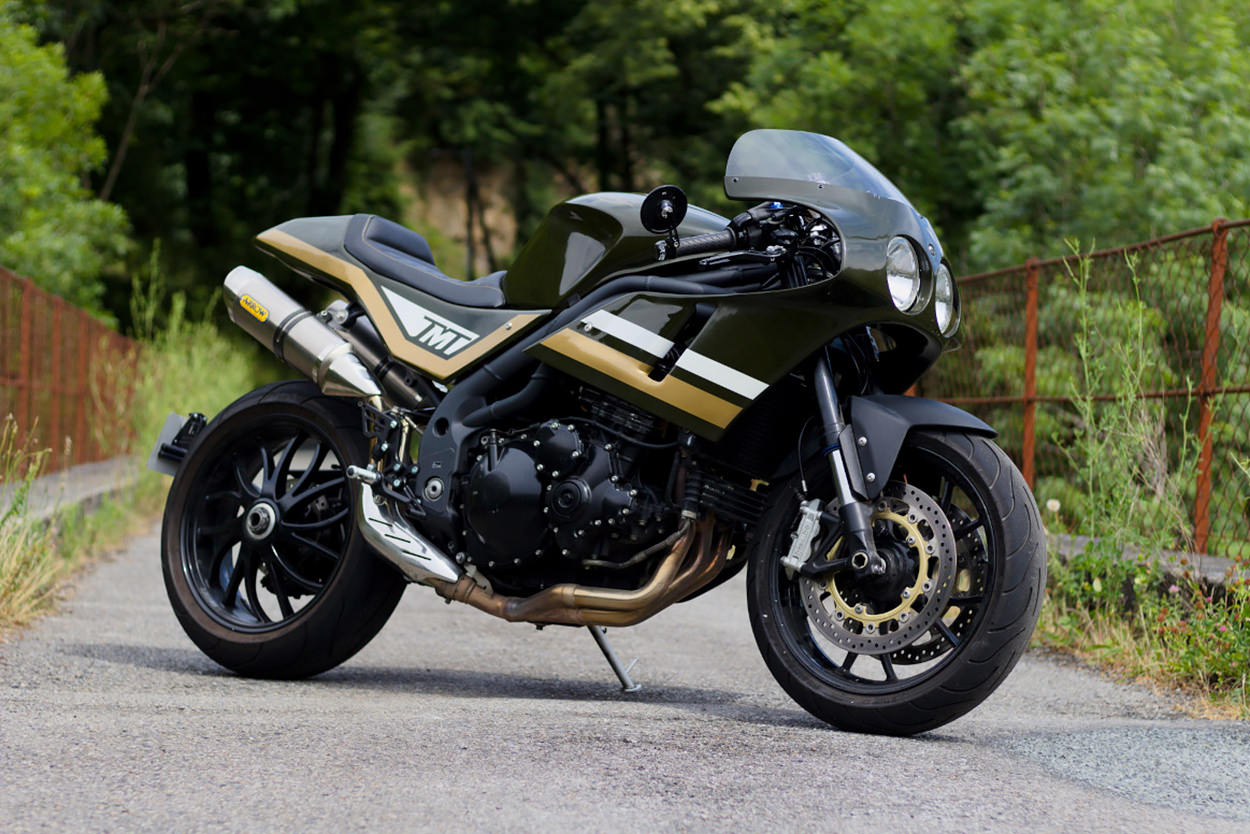 Starting with a stock 1050, Frédéric used his experience with GT race cars and motorcycle building to transform it into a 90s-inspired custom. Road racing bikes of the 80s and 90s are some of my favorite bikes, and this is up there with the best of them. 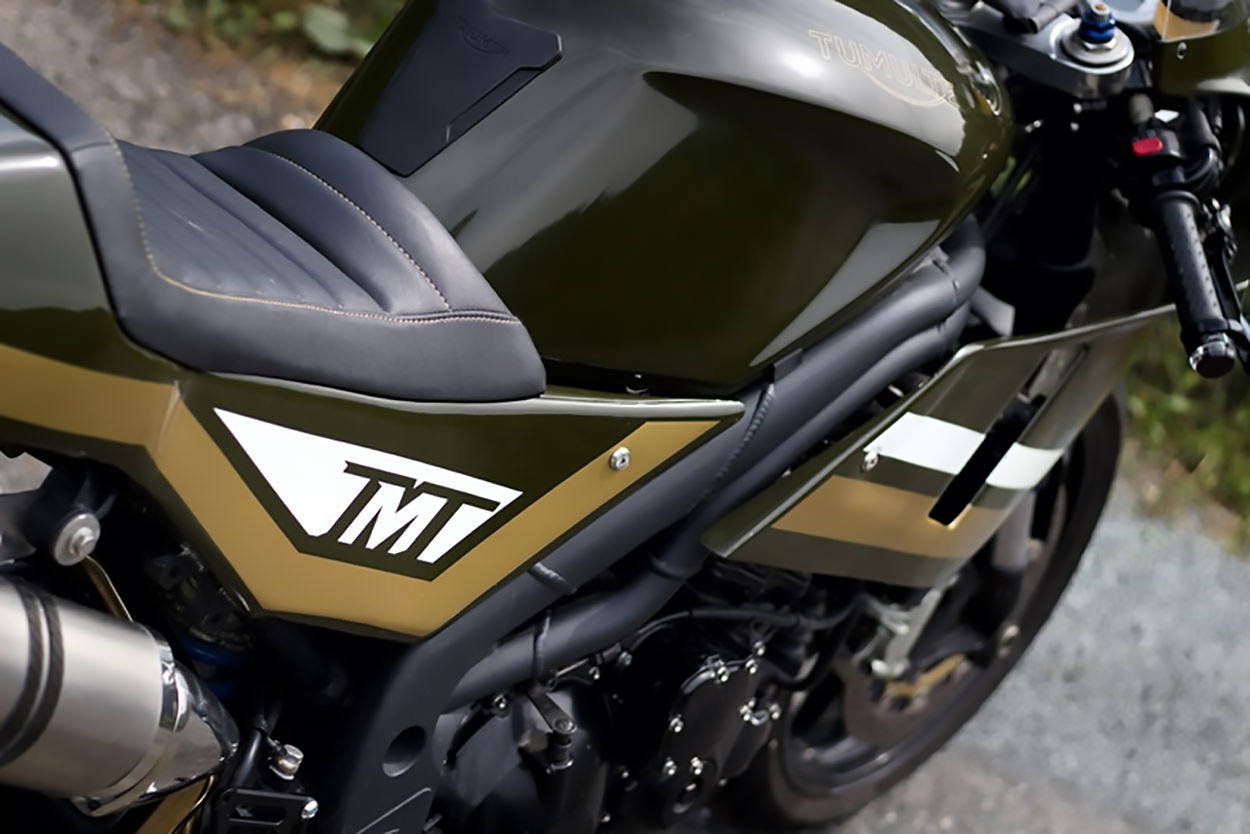 The front fairing, as you can tell, is from a Honda RC30, modified extensively to fit the Triumph. And if the back end also looks quite familiar, it’s because it was based on a Ducati 916. Housing stock Ducati tail lights from an actual 916, Frédéric built it himself out of fiberglass. Even though he claims to not be an expert with the material, he’s done a fantastic job.

Other special parts include Motogadget bar end indicators, Motogadget mirrors and a custom seat. ARP Racing rear-sets were bolted on, as were clip on handlebars. And there is also an offset license plate holder hanging from the swingarm to keep the new rear end clean. 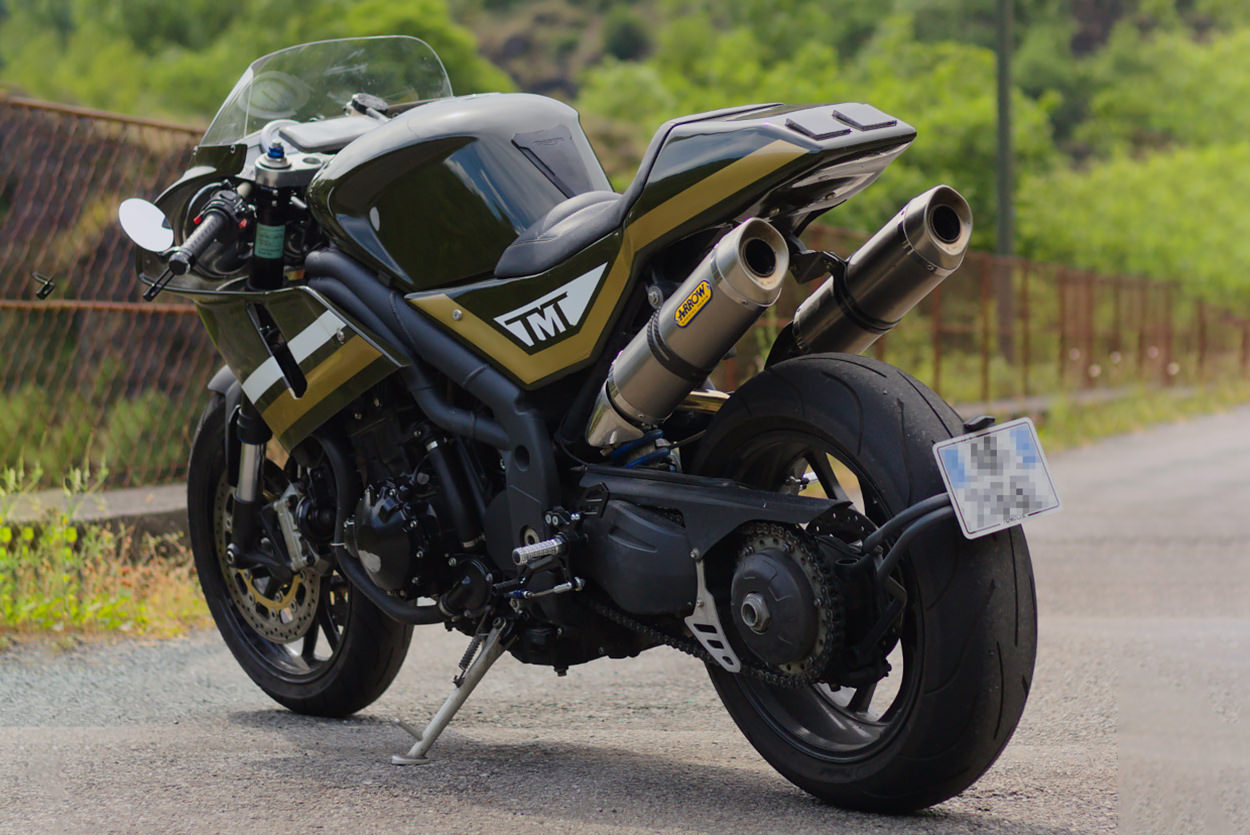 The green, gold and white graphics over the bodywork are sublime, matching the 90s aesthetic perfectly. The single-sided swingarm shows off the rear wheel (just like the RC30) and Frédéric is running Pirelli Supercorsa rubber. And the Twin Arrow mufflers out the back must produce an almighty howl from the inline triple.

With bikes like the MV Agusta Superveloce and the new Triumph Speed Triple RR taking influence from sporting motorcycles of decades past, it’s only a matter of time before 90s influence makes a comeback. Frédéric is ahead of the curve in this respect, and manufacturers have their work cut out for them if they are to top this. [Via] 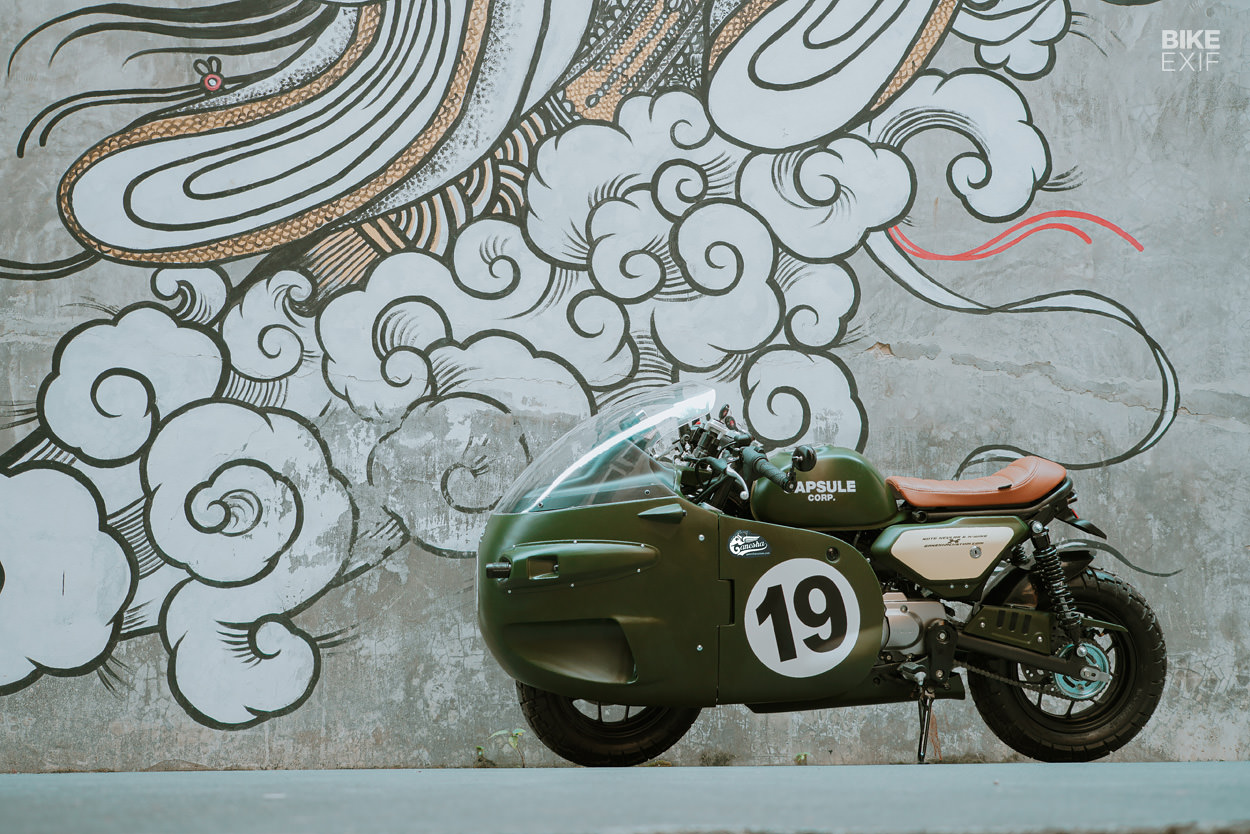 Honda Monkey Racer Replica There’s very little information out there on this next build, but what we do know for sure is that it’s based on an old racing bike from the 1950s. More specifically, it’s my all-time favorite racing motorcycle, built by my all-time favorite motorcycle company: the 1955 Moto Guzzi Otto Cilindri.

For those who didn’t grow up with an Italian background, that name translates to “eight cylinders.” That’s right, a little-known motorcycle manufacturer from Mandello del Lario in the north of Italy built a four-stroke V8 racing motorcycle—in 1955, no less. 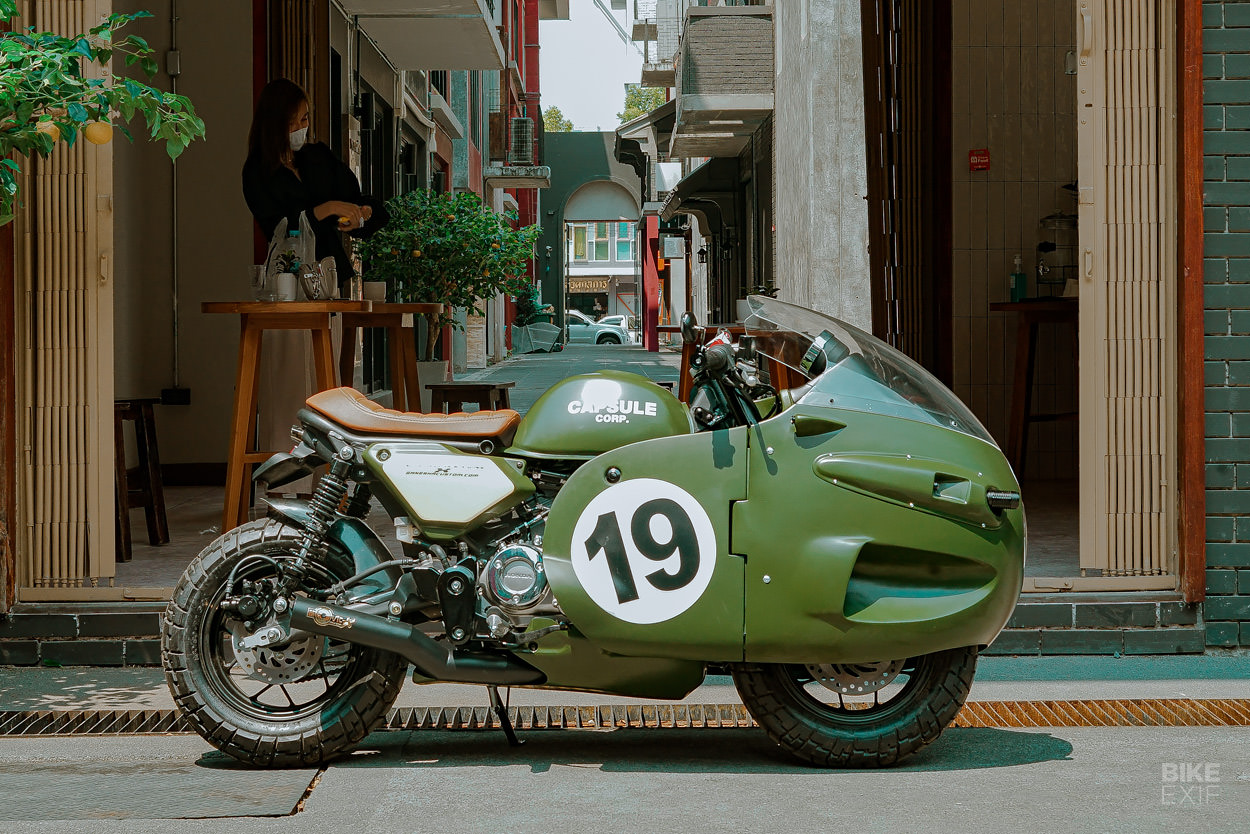 This feat would not be repeated by another Grand Prix race bike for another 20 years. But despite its blistering pace and being an engineering marvel, the old Guzzi was plagued by reliability issues. It was said to be so fast that only a handful of racers at the time were game enough to ride it. 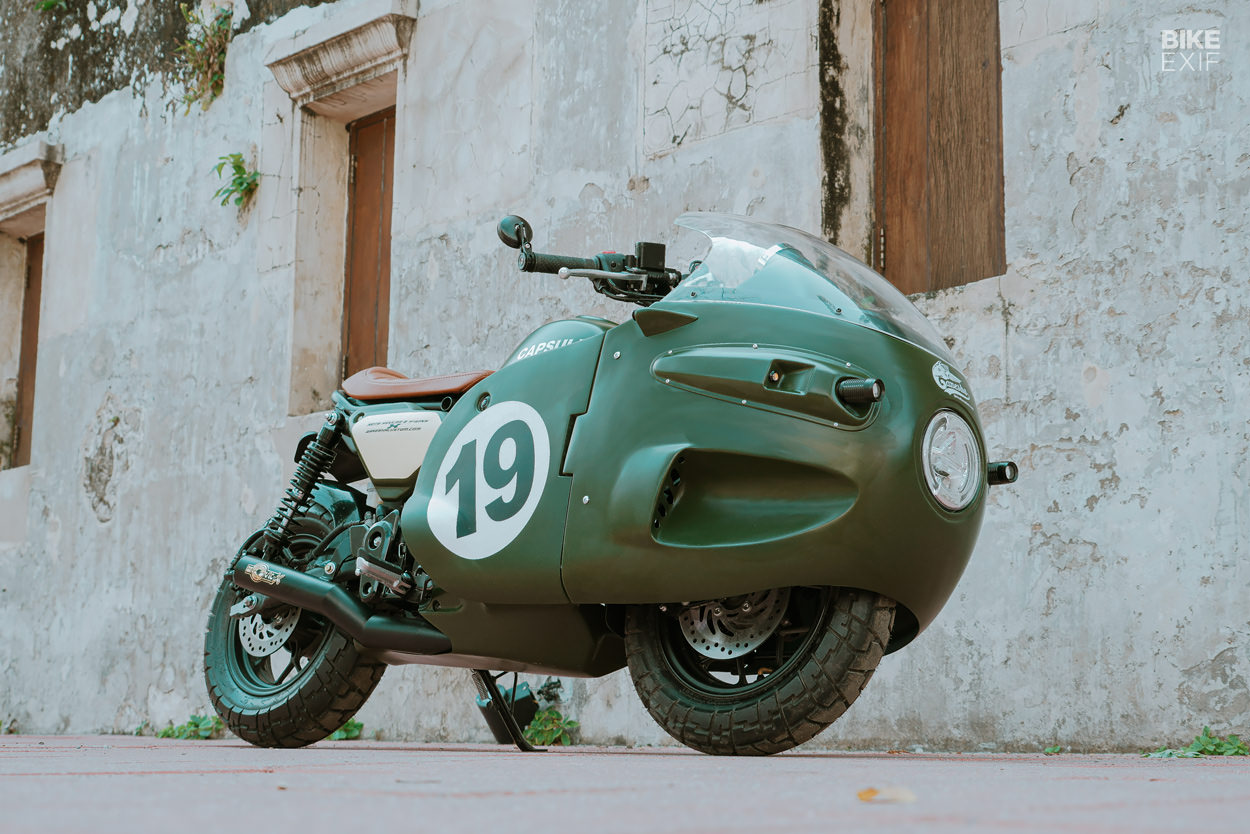 But that probably wouldn’t be said of the bike we’re looking at here. This replica is the work of the Japanese-Thai team of Ganesha Custom, K-Win and Mr. Note. The winner of the recent Honda Idea Challenge, the base bike is Honda Monkey.

Adorned with a dustbin fairing, new subframe, seat, clip-ons and lowered suspension, the pint-sized Honda has been transformed into a veritable race replica. 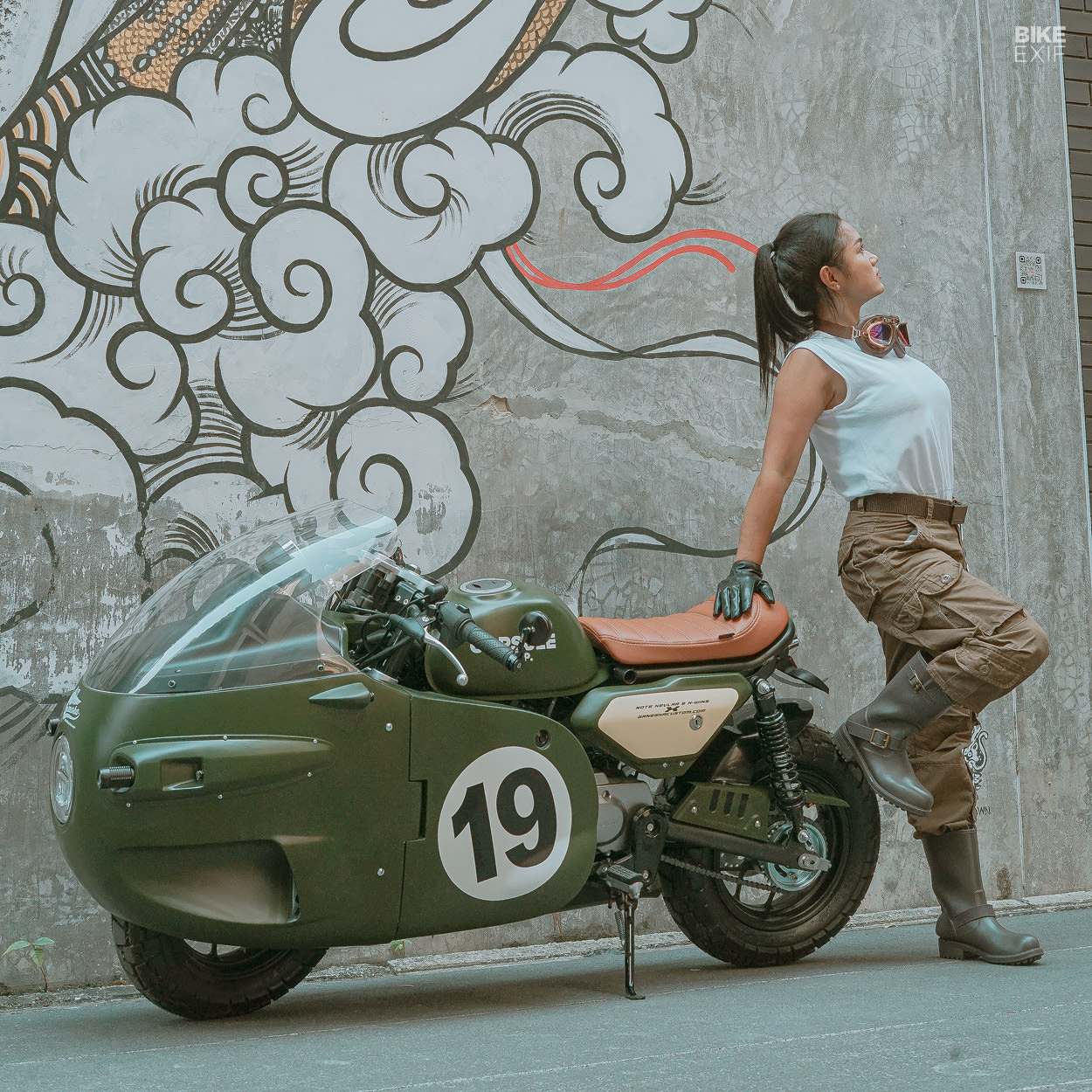 The Otto Cilindri wasn’t the only source of inspiration though—fans of the anime series Dragon Ball might also recognize the bike. Right down to the lettering on the tank and the LED lights that poke out of the fairing like gun barrels, it’s a stunning physical rendition of one of Bulma’s motorcycles from the series. [More] 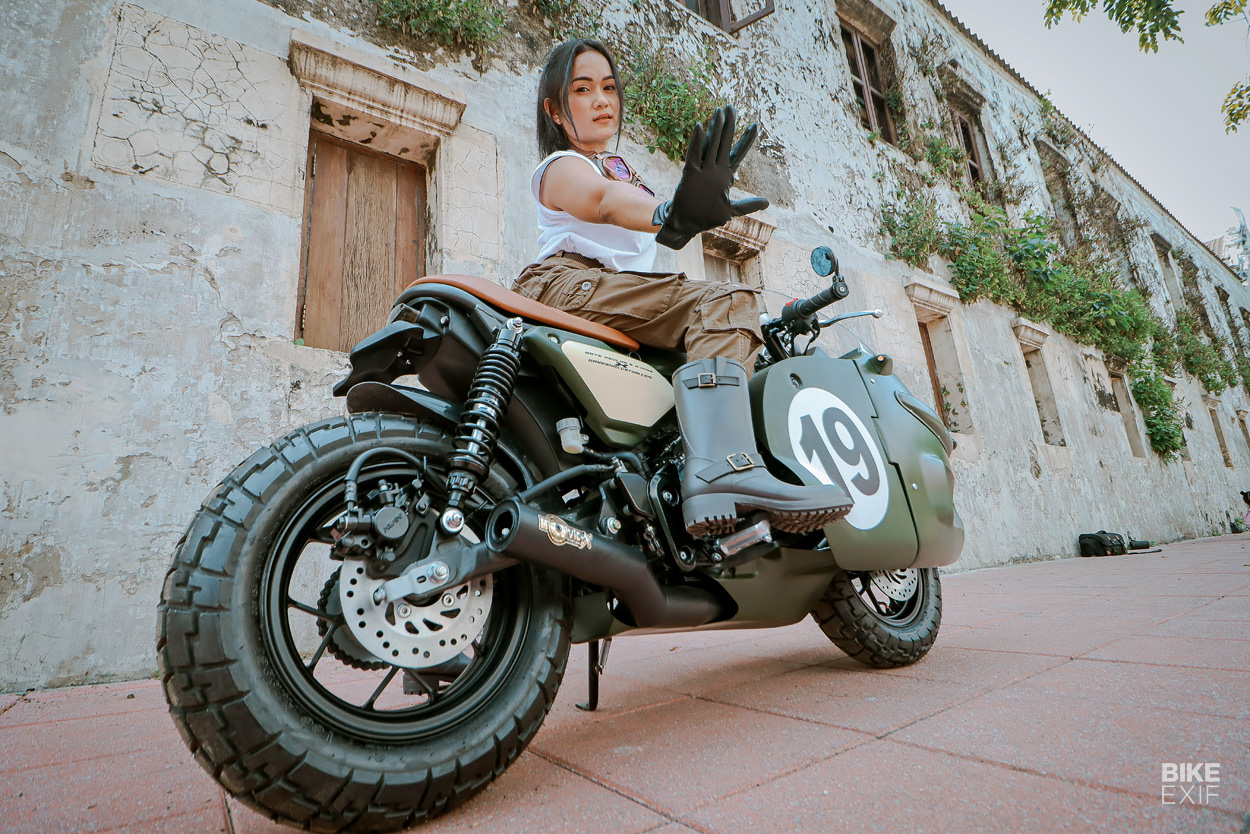