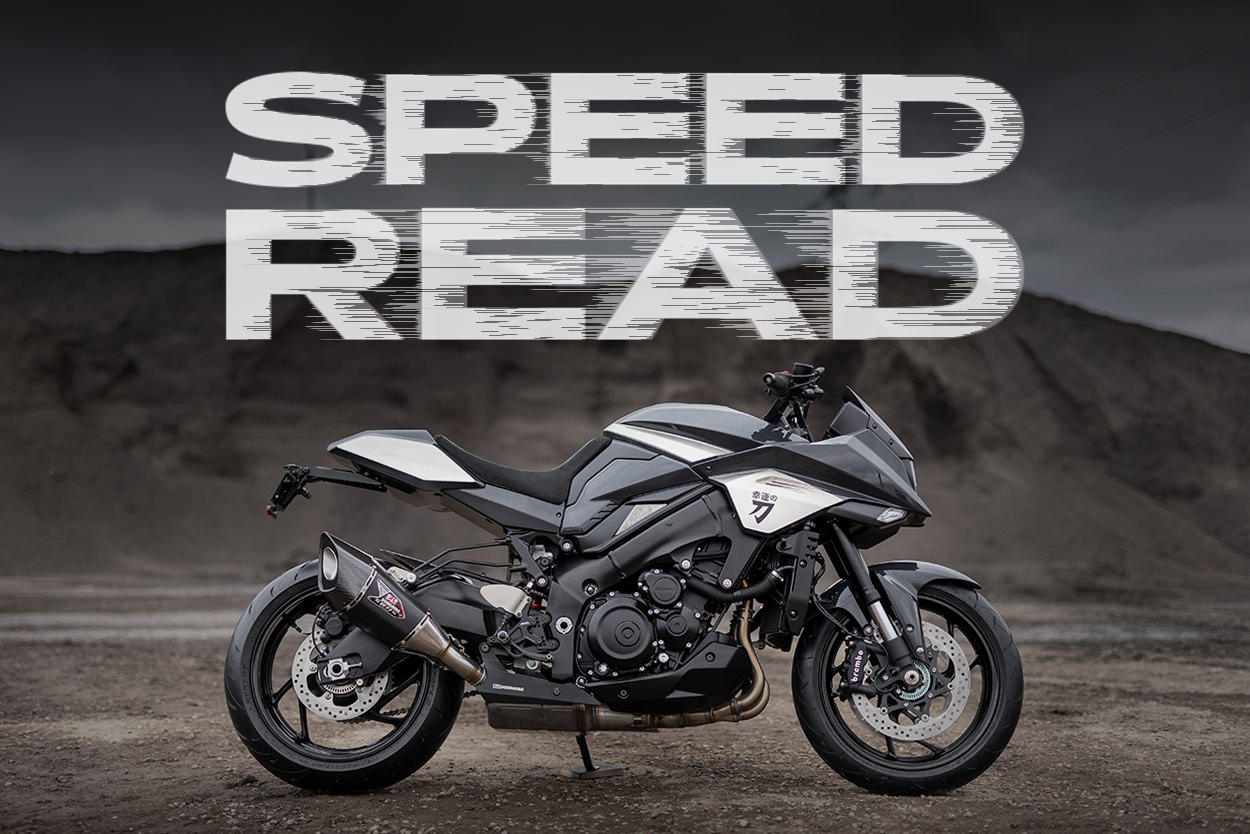 The French are out in full force this week, with a Katana from Lucky Cat Garage and an R nineT from Le Motographe. Big news from the OEMs too, with the new Harley-Davidson Sportster S and Zero FXE both breaking cover. 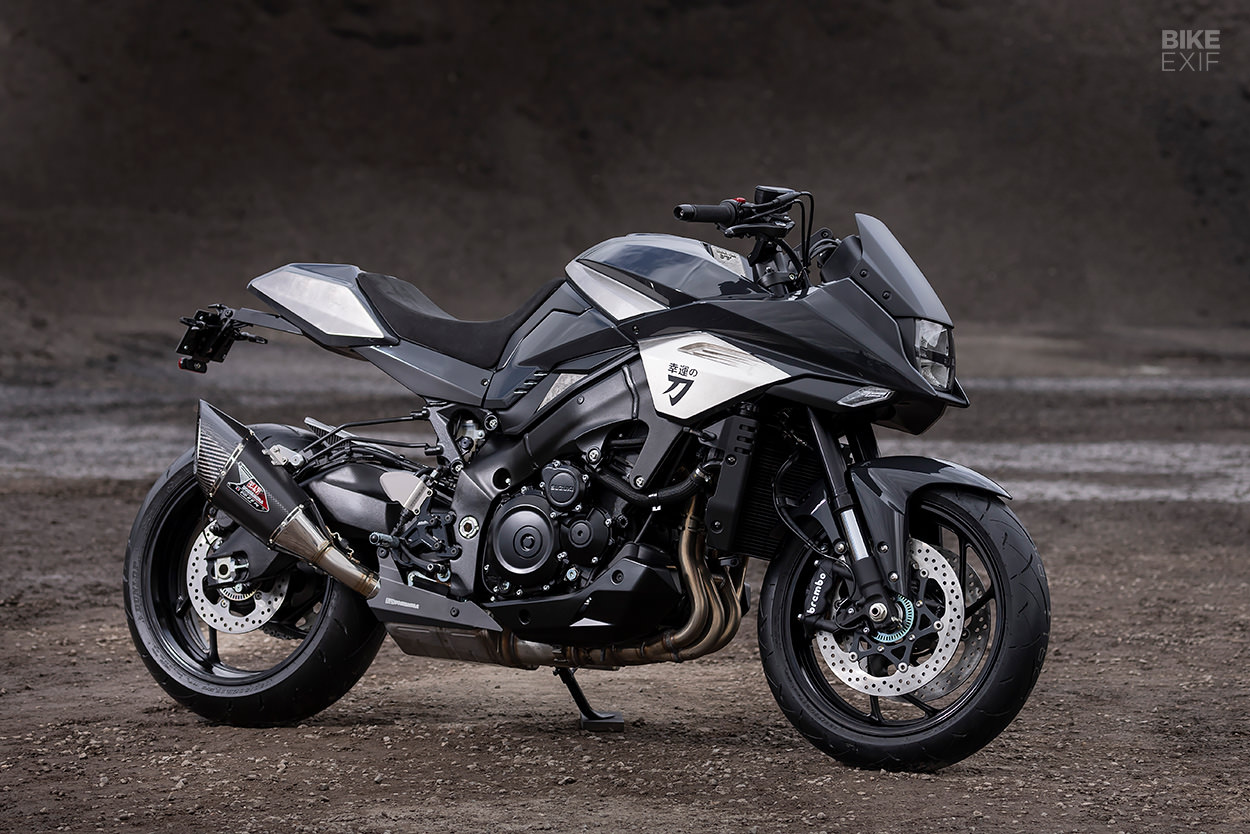 Suzuki Katana by Lucky Cat Garage Suzuki’s new generation Katana is a visual smash hit—a modern retro that recalls the past, but stands on its own merits too. If we had to customize it, we’d leave its bones alone and focus on subtle tweaks to add an air of exclusivity to it. That’s what Lucky Cat Garage has done here, and it’s magnifique. 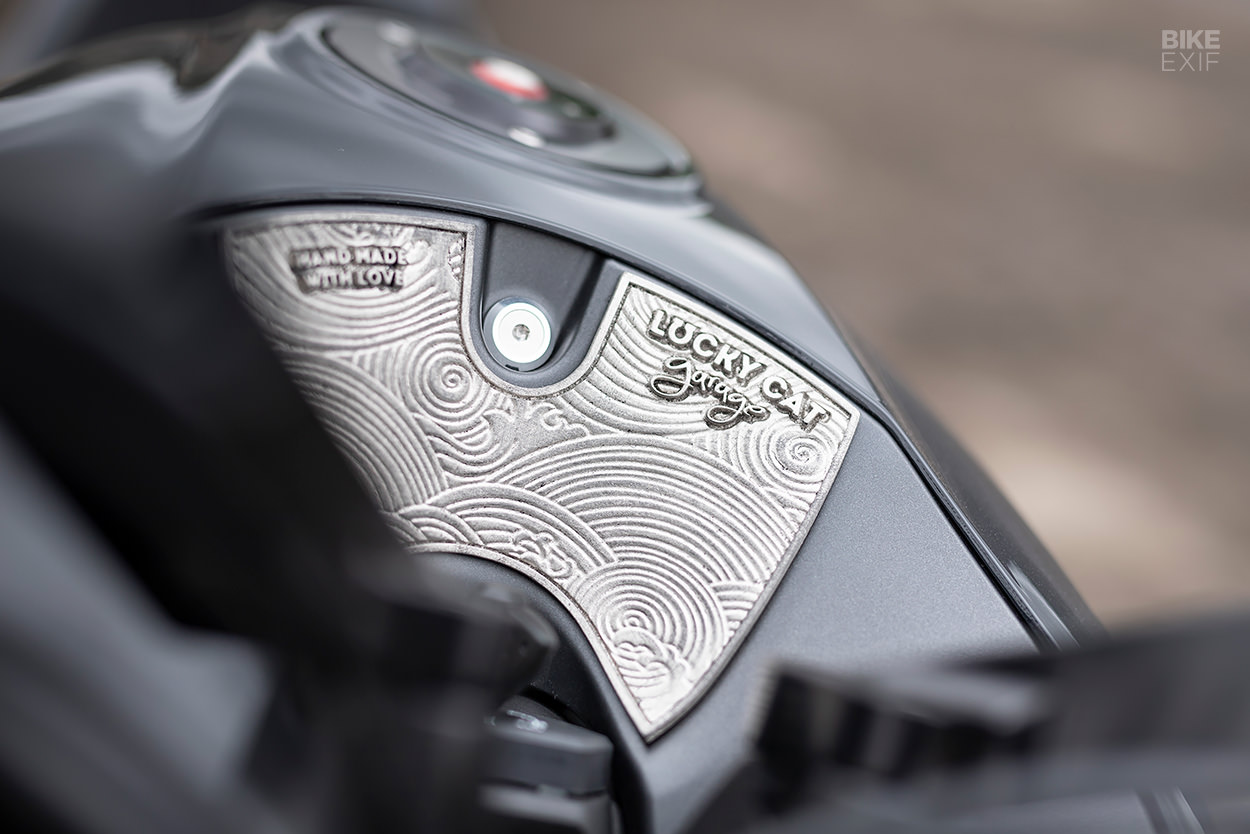 Lucky Cat is run by Séb Lorentz, who started the popular Sultans of Sprint race series, and his partner Laurence Chatokhine. Lucky Cat built the bike in collaboration with Suzuki France and Royal Vintage—a platform that partners with custom shops and trades in classic and custom motorcycles. They’ll be offering a limited series of 10 Katanas just like this one.

“The idea was to sharpen the Japanese sword with a much more sporty, exclusive and elegant version,” says Séb, “as an homage to Japanese art, culture and craftsmanship.” 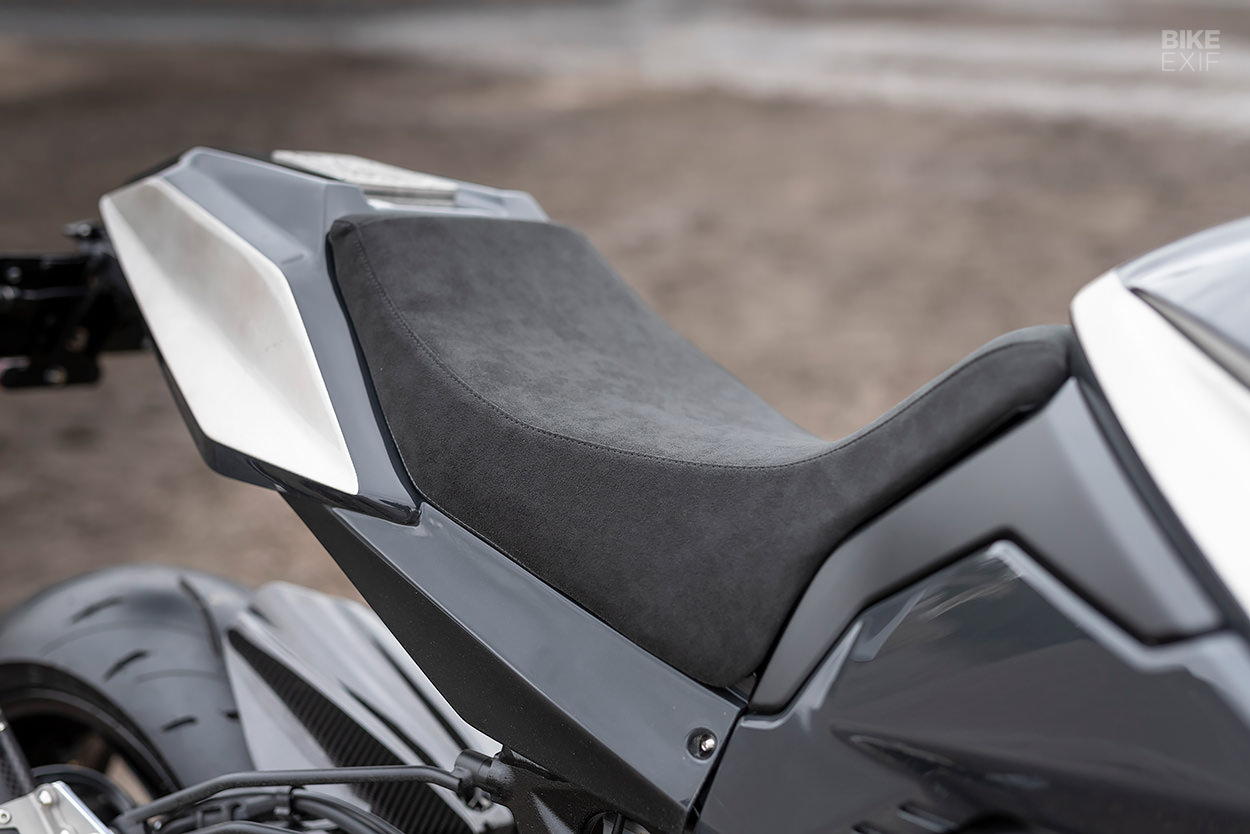 The main custom piece is the redesigned carbon fiber tail section. It’s sporting an Alcantara seat, and an engraved platinum insert that also carries each bike’s series number. There’s a carbon fiber blank-off plate underneath, an LED taillight embedded in the back, and the seat pops off using the stock seat latch.

There’s another platinum insert up at the tank, and two on the sides. The paint job’s a deep ‘Bushido grey,’ with platinum leaf gilding done by Laurence. 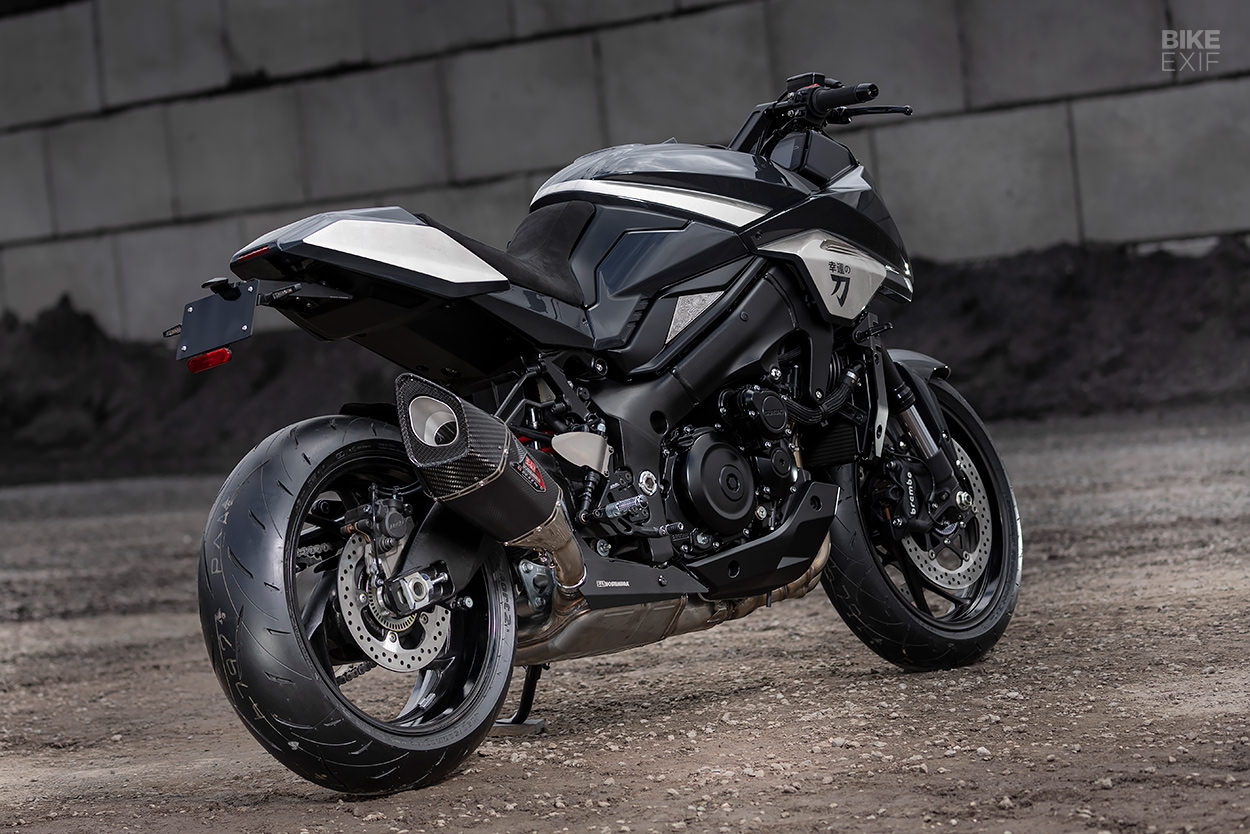 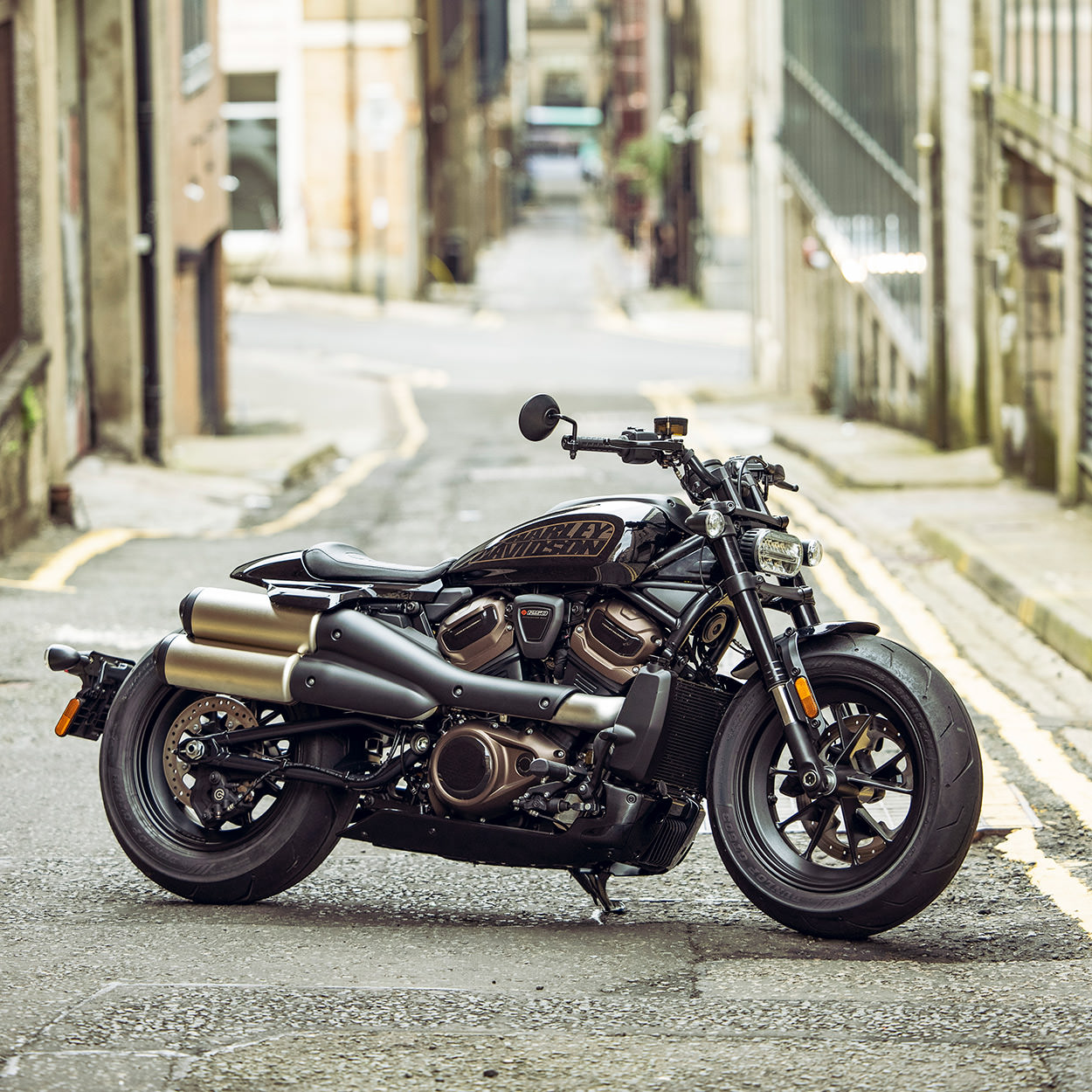 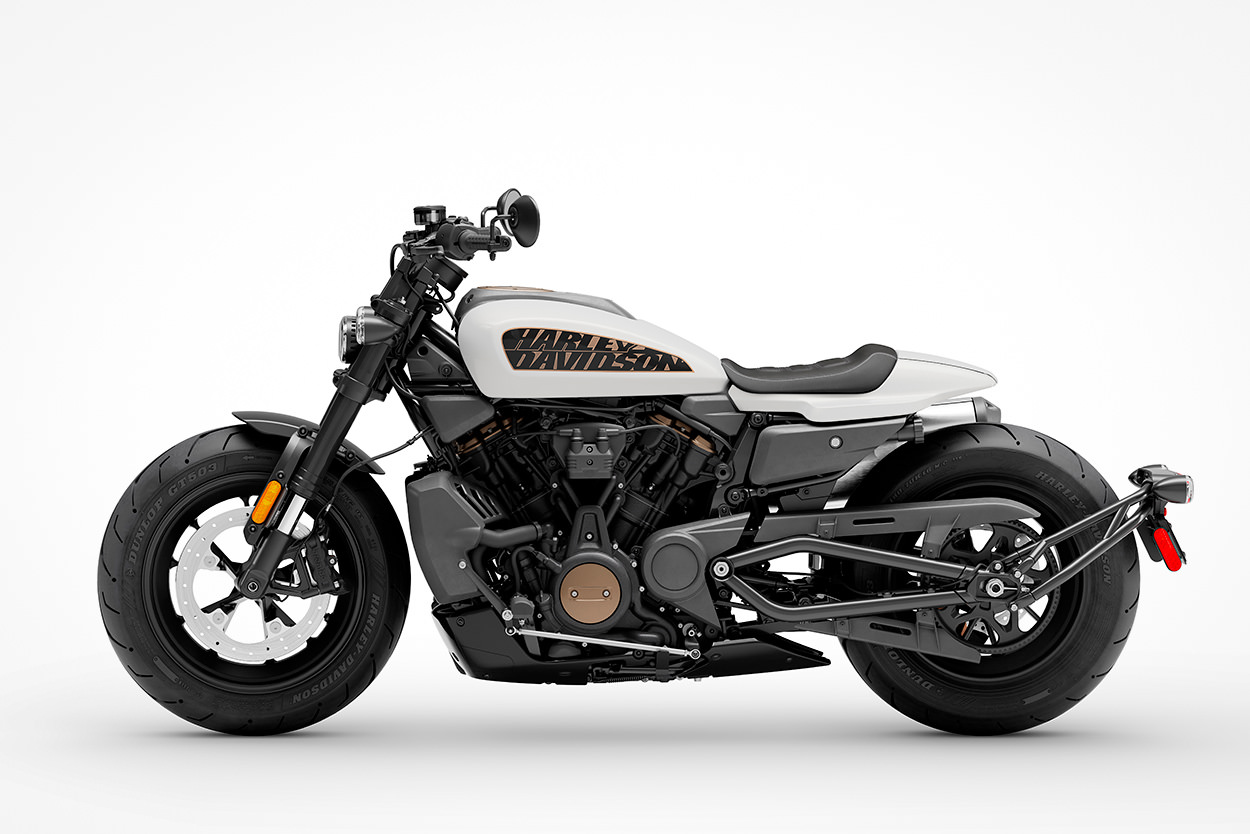 That’s a big jump up over the outgoing Sporty, though. Not only in numbers, but also in how and where the bike makes its power, since it now peaks higher in the rev range.

Harley says it’s “putting the sport back in Sportster,” (yes, really), so they’ve packaged the Sportster S with performance in mind. The motor’s a stressed member of the frame, the frame’s been designed stiff for better handling, and the tubular steel swingarm is braced to eliminate flex. 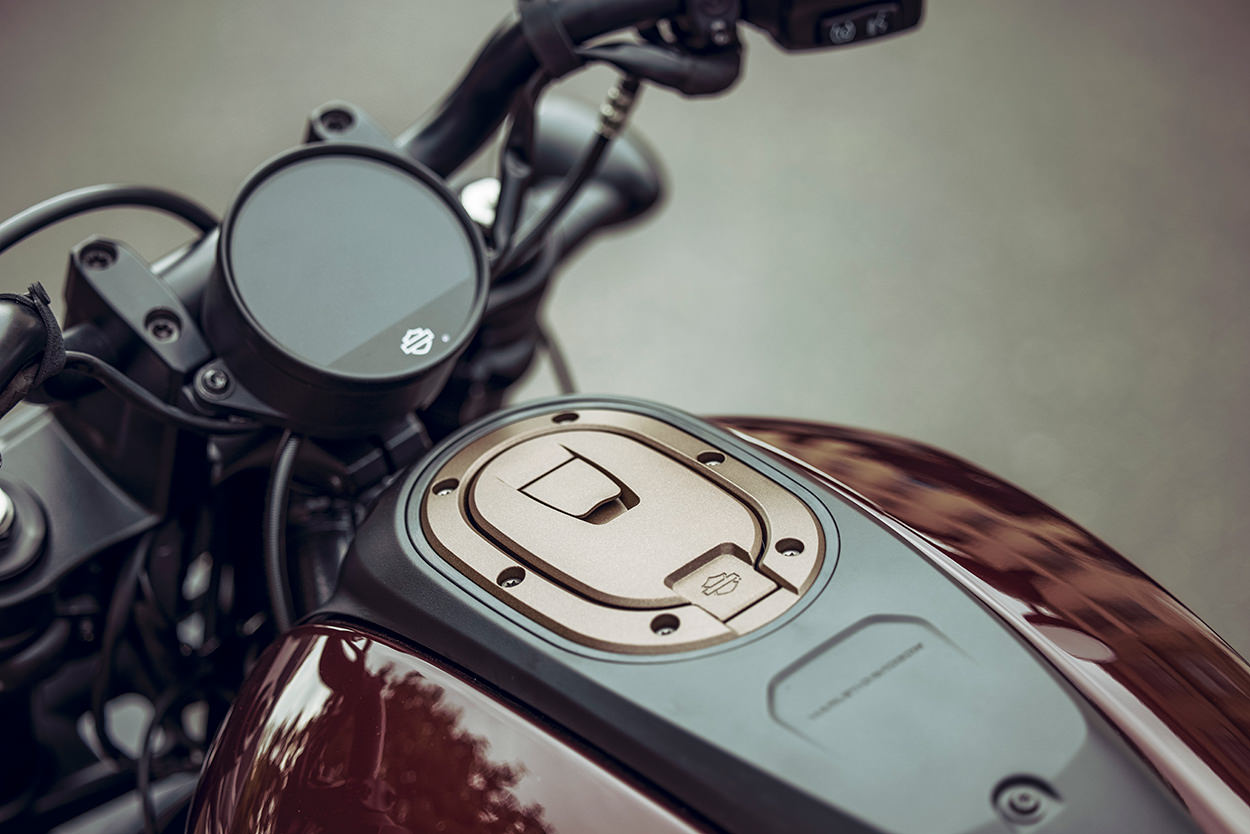 It weighs 502 pounds wet—so it’s hefty, but a little lighter than an Indian FTR1200 and a lot lighter than the old Sporty. You get Showa suspension at both ends with adjustable rear preload, chunky 17F/16R alloy wheels, and Brembo brakes with a single 320 mm disc up front.

On the tech side, the Sportster S (like the Pan Am) finally gets the built-in electronic aids that riders have come to expect as standard on premium bikes. So it has cornering ABS, traction control, switchable rider modes, and a swanky 4” TFT display with Bluetooth connectivity. Cruise control is standard issue, but heated grips and a USB-C charge port are optional extras. 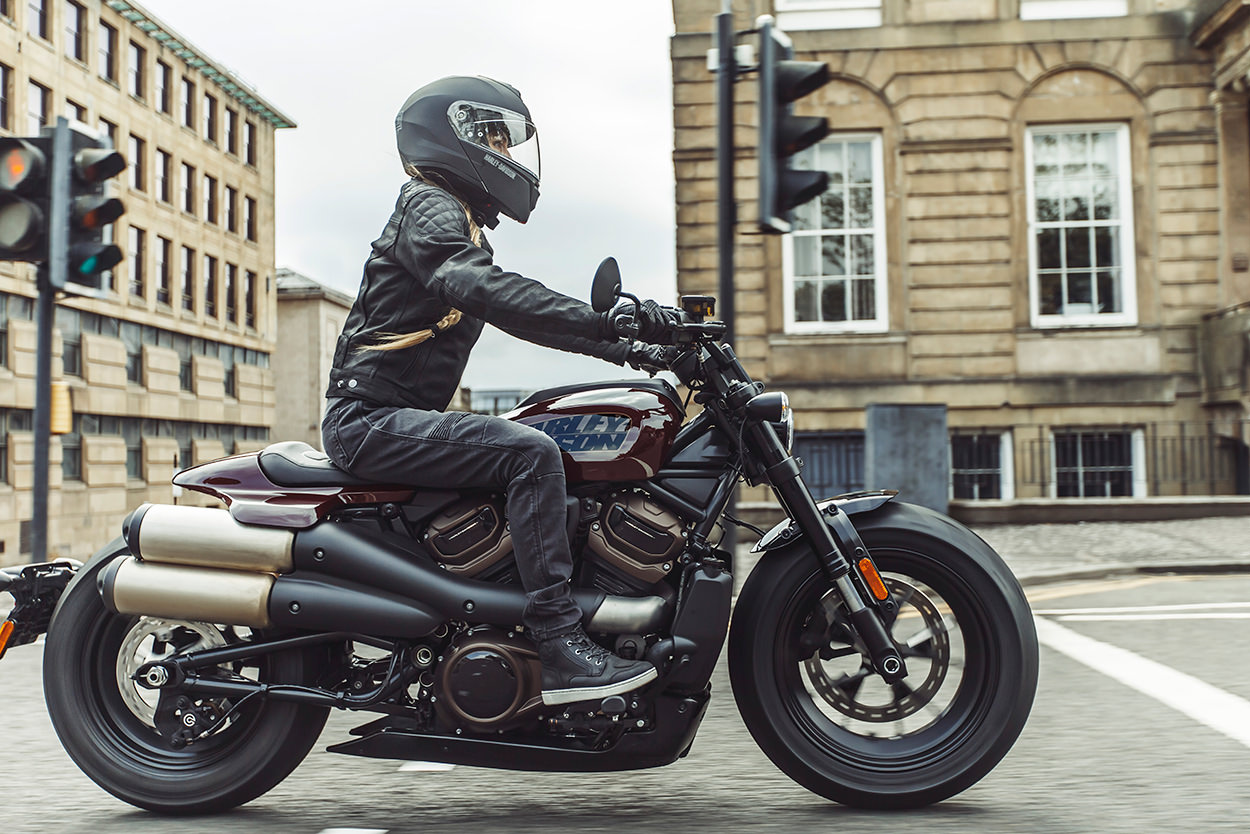 Aesthetically, the Sportster S looks squat and purposeful, but also somewhat cartoonish. According to H-D’s design lead, Brad Richards, the bodywork took inspiration from the iconic XR750, while the balloon tires came from the Sportster Forty-Eight. We get the concept, but we’re not sure the flat track and bobber mishmash works—and the massive mufflers and wide array of plastic covers don’t help matters either.

The low seat, narrow handlebars and forward pegs (mids are an option) also make for an awkward riding position. And with very little rear suspension travel, a limited lean angle and just one brake disc up front, we wonder just how ‘sporty’ the new Sportster S is. 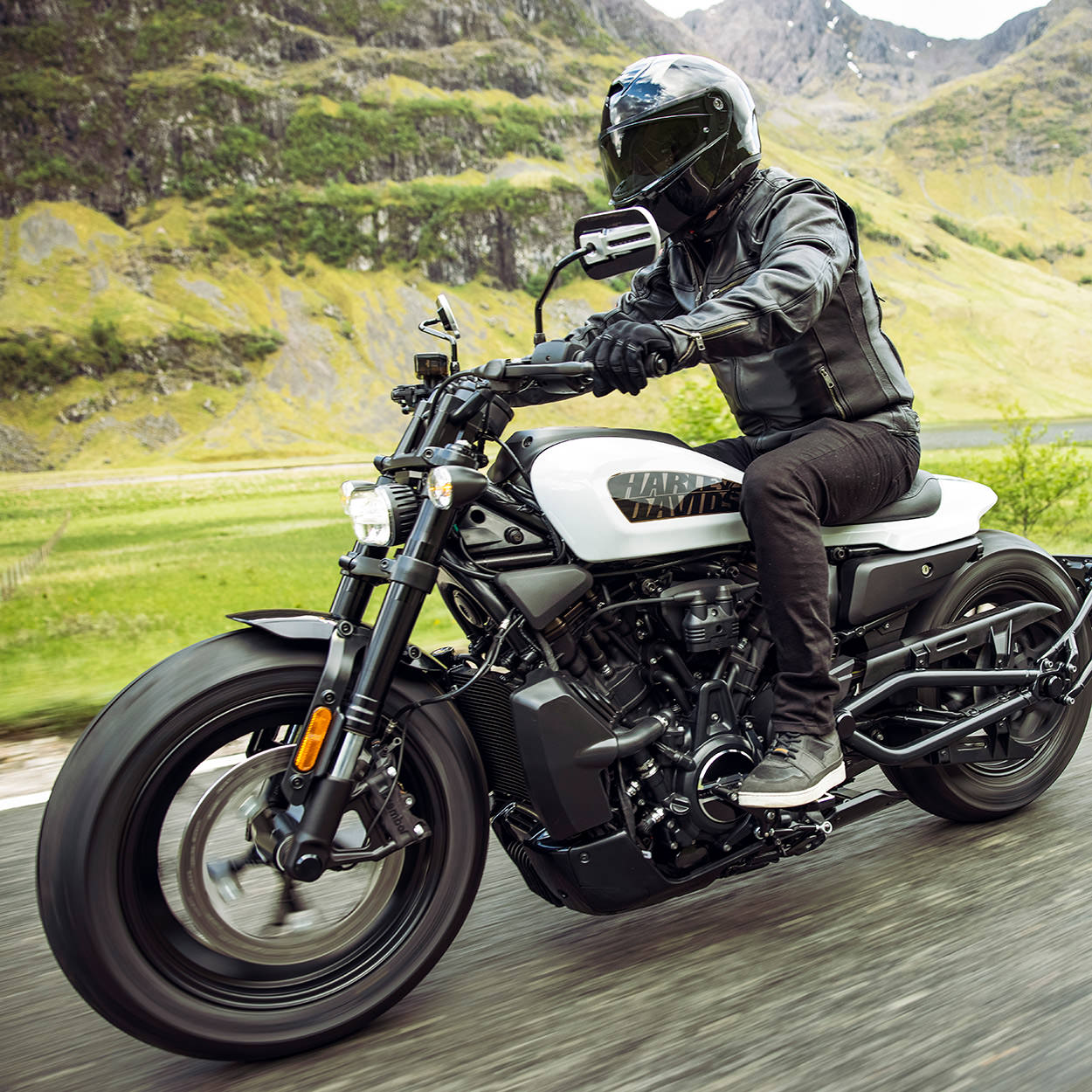 We’re riding it this week to find out… but even if it’s a goer, we still have one major gripe with it: it doesn’t look very customizable. The old Sporty was beloved for being the perfect blank canvas to do just about anything with—but the Sportster S looks like it only fits together one way. And we’re worried about what might be hiding under that giant belly pan.

At $14,999 the Sportster S is definitely in line with Harley’s strategy to focus on premium motorcycles. It’s the first in a new range too, and H-D is already teasing a more classic-looking Sporty built on the same platform. Fingers crossed. [Harley-Davidson Sportster S] 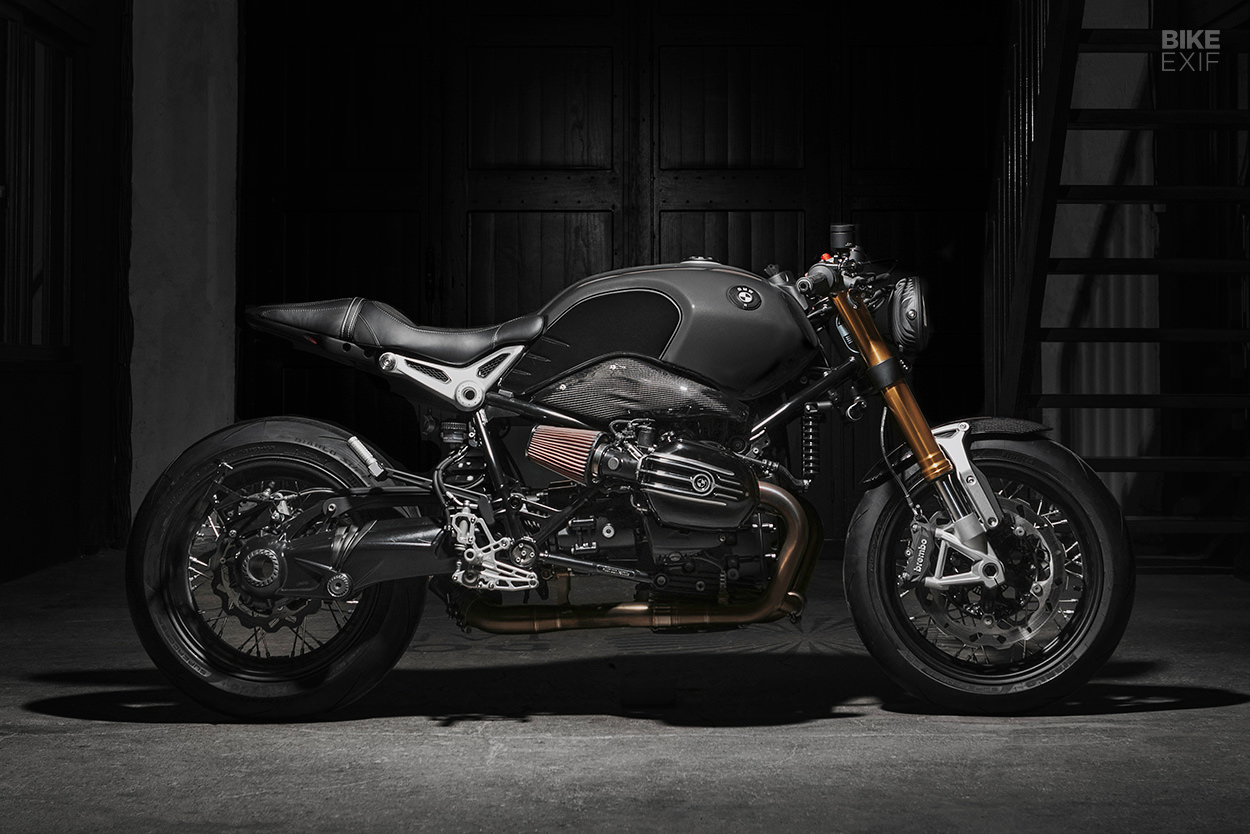 Le Motographe tidied up the cockpit with custom triples, designed to hold a digital Motogadget dash. The dash plugs in via a module designed by the French company DevMoto, to circumnavigate the BMW’s bricked electronics.

Look closer, and you’ll notice that the clip-ons are directly integrated with the top yoke too. There’s a Koso LED headlight bolted to the bottom yoke with a custom bracket, and a one-off gas cap and tank badges. 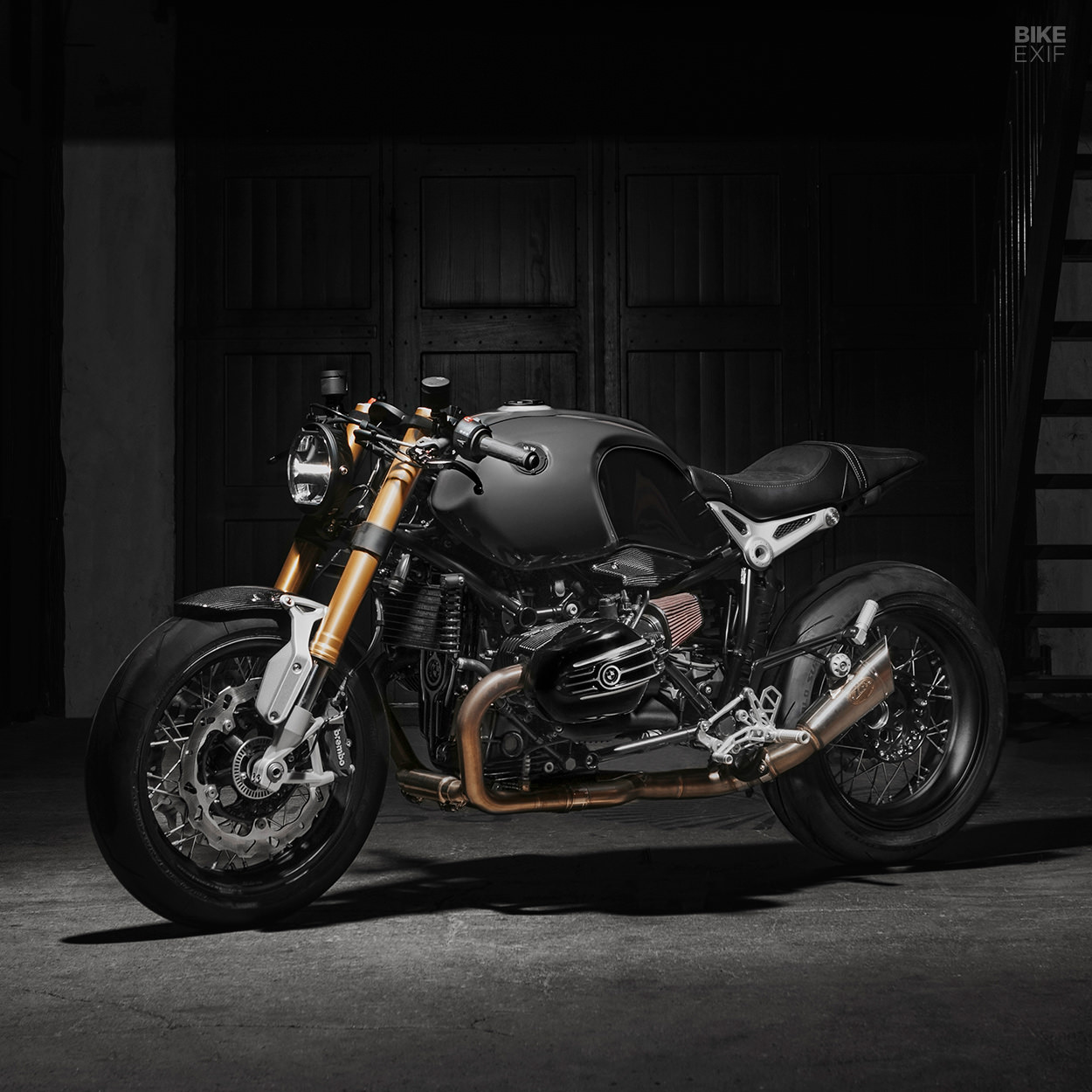 Lower down, Le Motographe swapped the airbox for a couple of K&N filters, then added a carbon fibre cover where the air intake used to be. They also upgraded the rear sets and passenger pegs, and installed a Zard exhaust system.

The tail section’s been heavily reworked to be sharper. The crew re-upholstered the seat, but ditched the subframe underneath for a custom aluminum unit, complete with an integrated taillight and turn signals. It’s a sleek design, with the pillion pegs remounted on new brackets lower down to help clean up the frame.

Everything’s been redone in various black and grey finishes, with new machined valve covers from BMW’s aftermarket collection. If it appeals to you, keep your ear to the ground: Le Motographe are planning to offer some of these parts for sale. [Le Motographe] 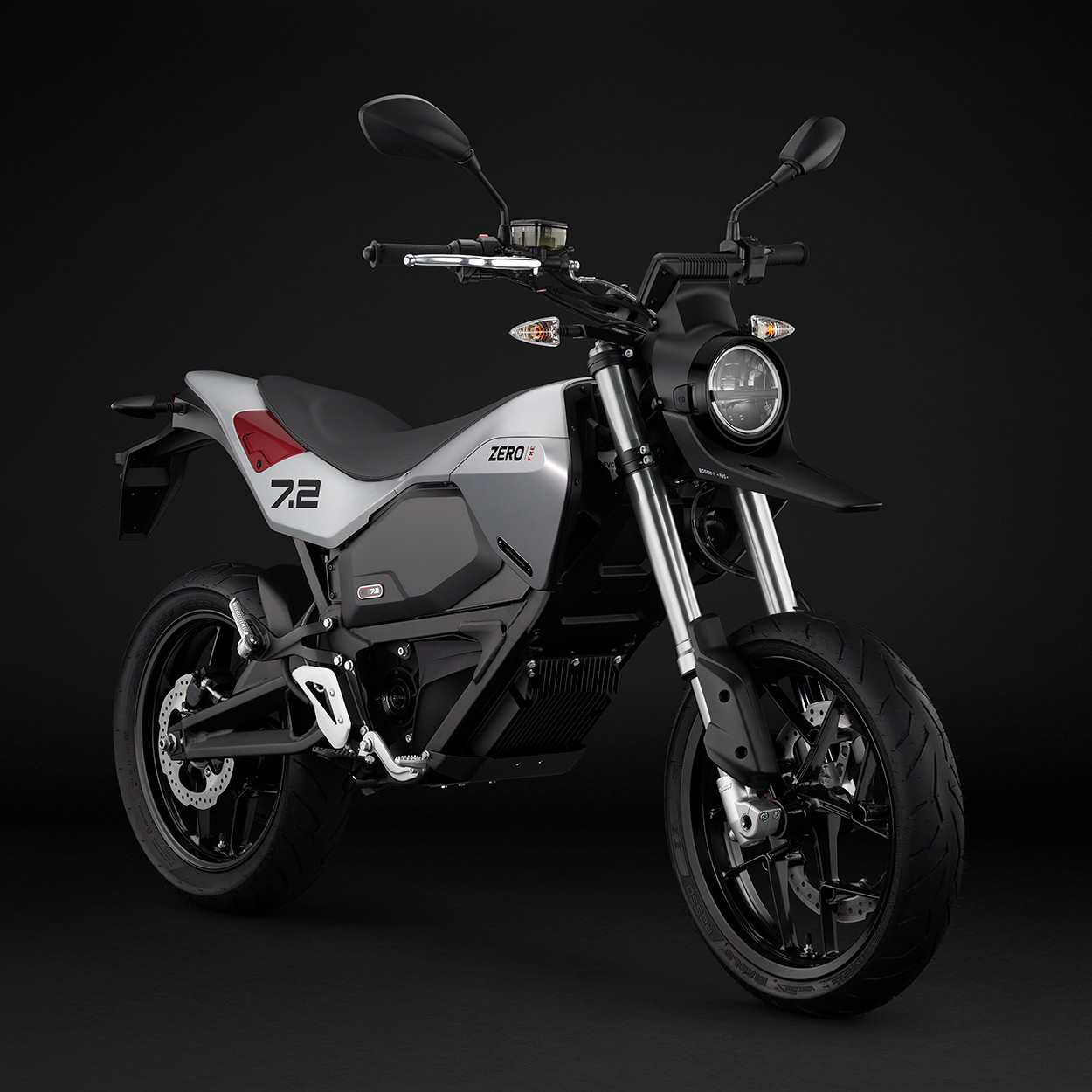 Zero FXE The European Union is murmuring about banning fossil-fueled cars by 2035, and they’ll probably be gunning for motorcycles next. Like it or not, the future is electric—but brands like Zero Motorcycles are ahead of the curve, by being fully committed to battery-powered transportation.

Zero’s brand new FXE model should look familiar to Bike EXIF regulars: it’s based on the custom Zero FXS by Huge Design from a couple of years ago. 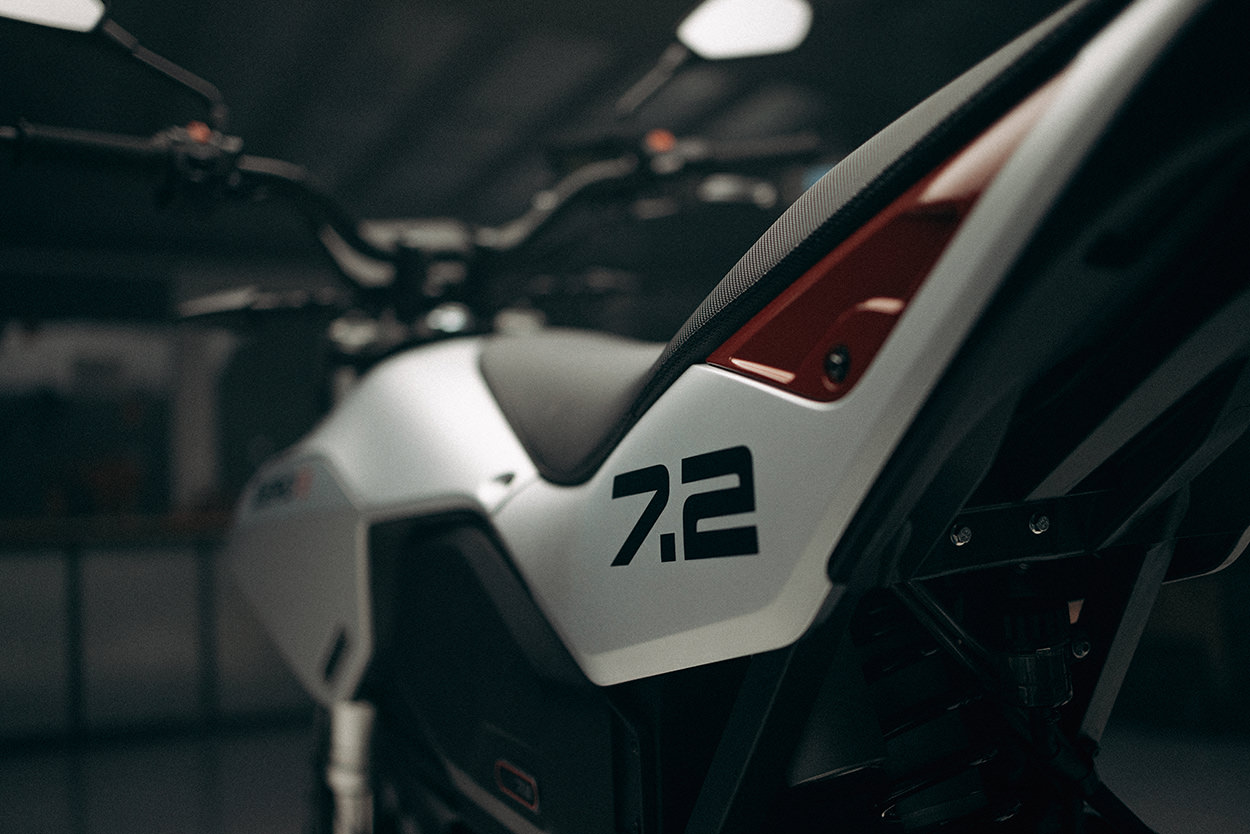 Zero had always intended to take design cues from the collaboration, and the resulting bike is about as close to the original concept as a production bike can get. That’s probably because the Huge Design build pushed the envelope without sacrificing ridability—thereby making the design easier to replicate for production.

With its sleek bodywork, slim perch and 17” wheels, the Zero FXE is effectively an electric supermotard. It uses Zero’s proprietary ZF 75-5 powertrain and Cypher II software, with a peak output of 46 hp and 106 Nm of torque. Its numbers suggest that it’s aimed at spirited urban riding; it’ll do up to 85 mph, with 100 mile city range and 40 mile pure highway range.

The combined city and highway range falls somewhere between 40 and 75 miles, depending how heavy handed you are. Charging the 7.2 Kw battery pack takes 9.7 hours, or just 4.1 hours with Zero’s optional upgraded charger. You can also set the bike to ‘eco’ or ‘sports’ mode, and customize its performance via your smartphone.

Standard equipment includes adjustable Showa suspension at both ends, high end J.Juan brakes with Bosch ABS, and Pirelli Diablo Rosso II tires. There’s a full color bonded 5” TFT dash in the cockpit, which can also pair up with your smartphone to turn it into a second customizable display. The lights are all LED units, the seat height’s 32.9” and the FXE weighs a paltry 298 lbs. 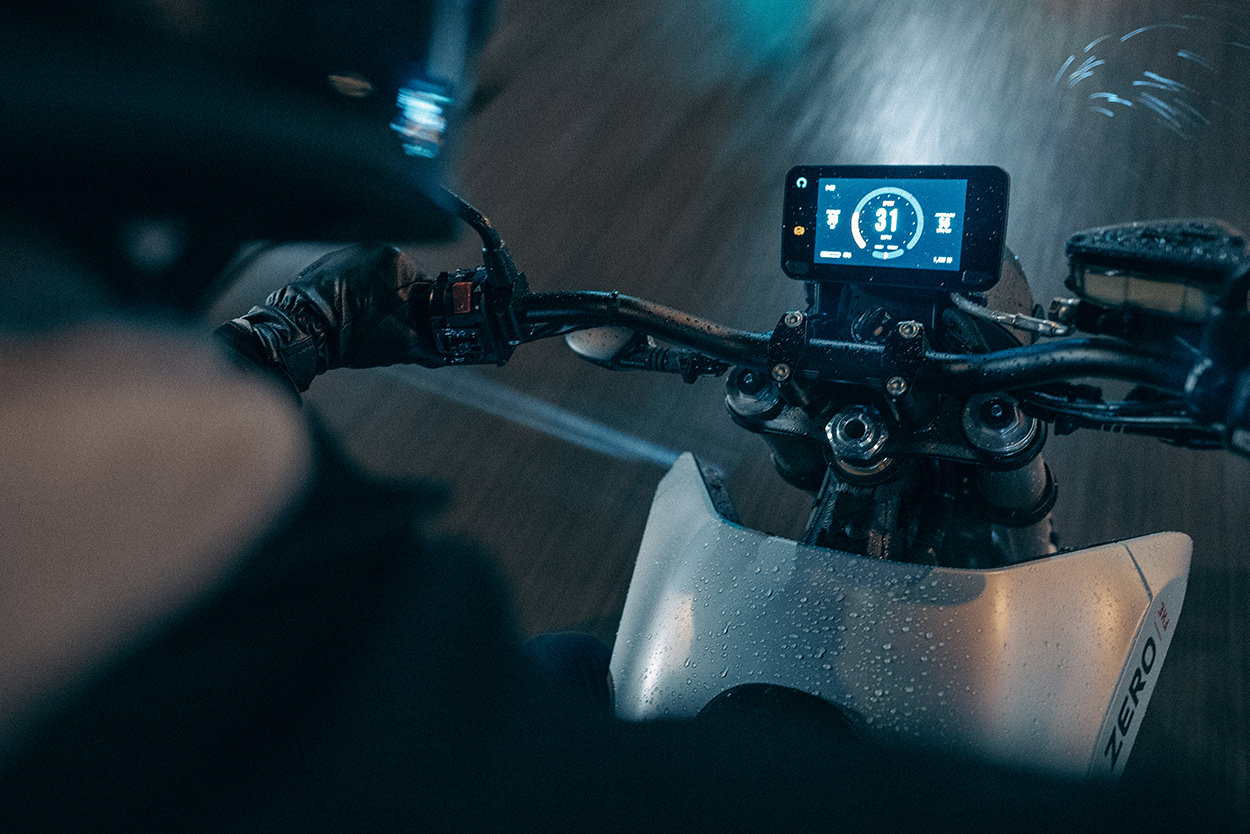 We’ve been admiring Zero’s range for a while, but the FXE is a true standout. Zero have taken advantage of their compact FX platform, and built a street-able bike that’s minimalist and attractive, and should be tons of fun to whip around on. And with a starting price of $11,795, it’s a damn sight cheaper than some higher end electric motorcycles out there.

If the future really must be electric, the FXE is a step in the right direction. [Zero FXE] 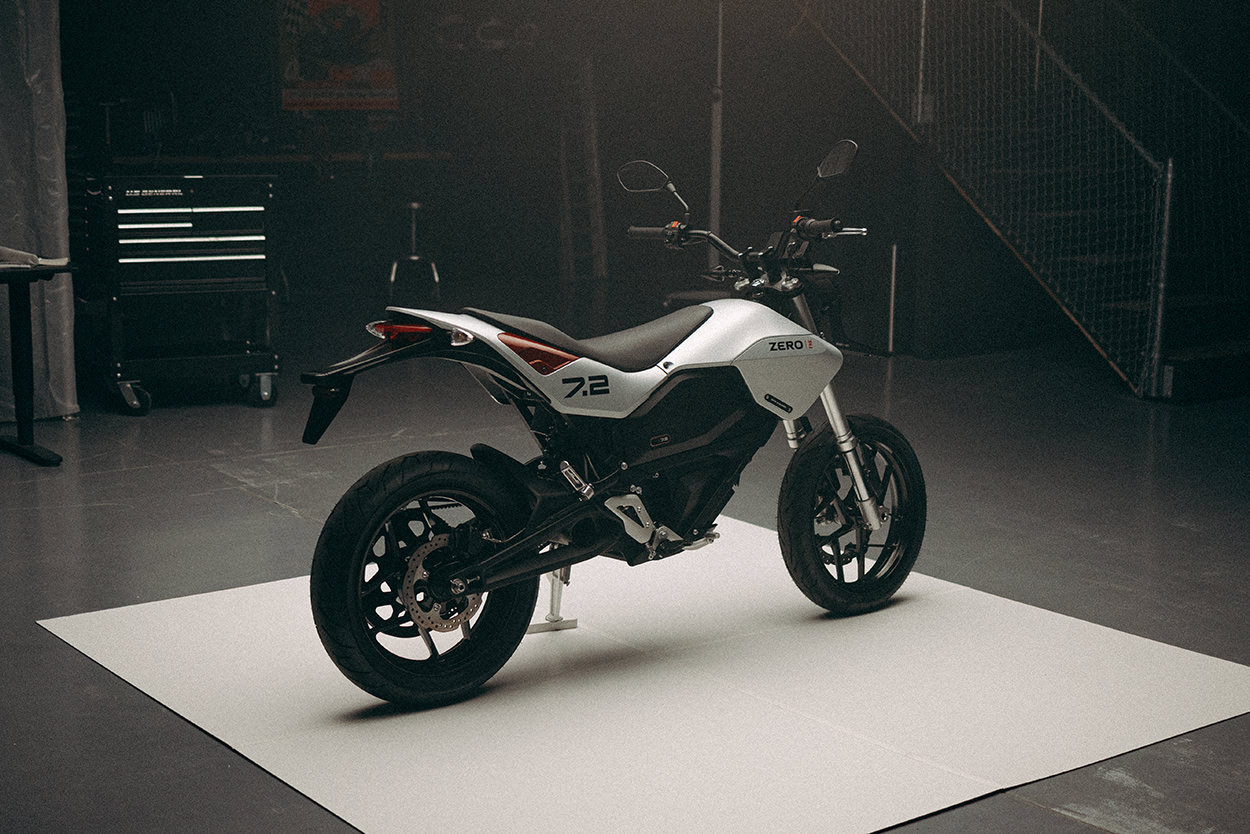