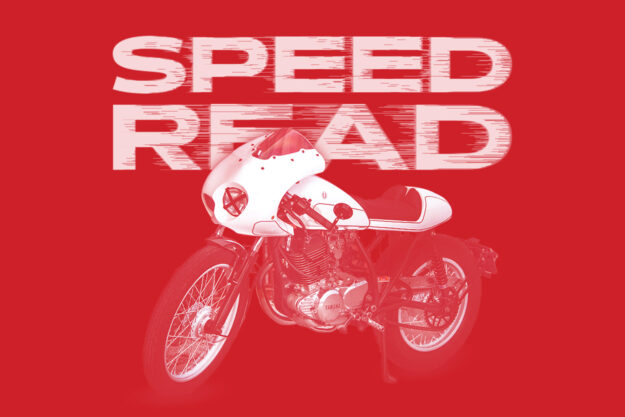 We kick this week’s edition of Speed Read off with further proof that Yamaha SRs make great café racers. We also cover news of Guy Martin’s latest exploits, and a custom Yamaha RD400 and Honda CB750. 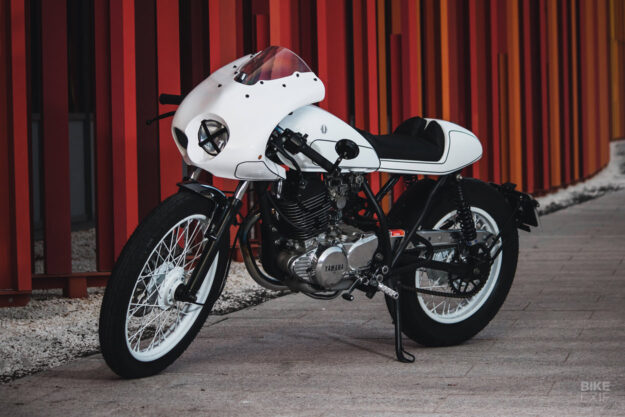 Yamaha SR250 by deWolf Moto Co. Built in his hometown of Zaragoza, Spain, this is Santi deWolf’s third build under the deWolf Moto Co. banner. Santi started with two donor Yamaha SR250 donors; the first SR to go under the knife was turned into a bobber, with the second patiently waiting its turn. This is that second SR, and the end result of a lot of hard work. 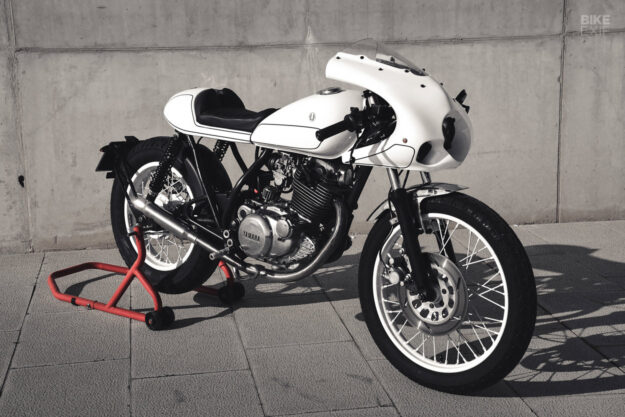 Yamaha’s SR platform is perfect for custom builders, and it looks like Santi has taken full advantage of this. Small, lightweight and extra fun, deWolf has transformed the diminutive commuter bike into a full-blown neo-classic café racer. When he’s not building bikes he’s a mechanical engineer, working for a large home appliance company, so he’s used his engineering skills to good effect.

“Why can’t small bikes be fun, perform better than stock and be classy?” asks Santi. “The objective was to build a much different café racer with modern flair on a very tight budget. It was a non-runner—wrecked but cheap.” 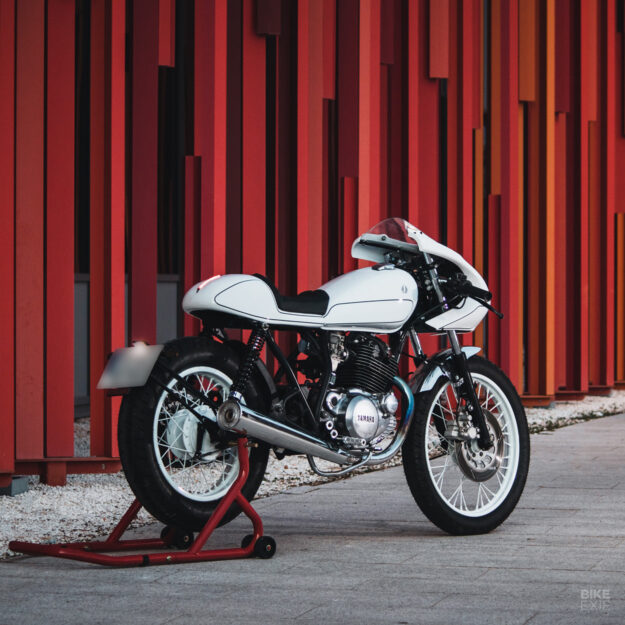 With this ethos in mind Santi got on with it, tackling every aspect of the build himself except the paint and the upholstery. The front fairing and seat were mocked up using foam blocks before being made in fiberglass. Everything was rebuilt, including the engine, suspension and wheels.

The rear subframe was modified to fit a new seat unit, with the electrics all cleverly hidden away. The frame was powder coated, and the bike was entirely rewired, since the donor bike had come in a sorry state. 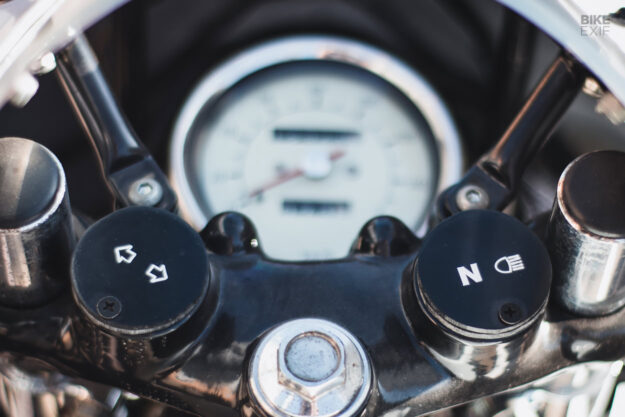 Santi has proven that he has what it takes to build a stunning machine, and even scored an invite to this year’s Bike Shed Motorcycle Show in London. The bike is currently for sale, so that Santi can move onto his next project, a Honda SLR650.

We will be watching with great interest. [deWolf Moto Co. Instagram] 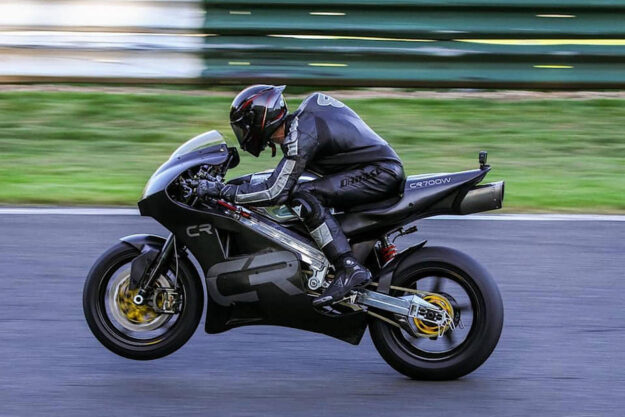 Guy Martin on the Crighton CR700W Guy Martin is at it again. No, he’s not building another Spitfire—he’s out to break another land speed record. This time he’s aiming to double the ton (200 mph) on the rotary-powered Crighton CR700W.

Brian Crighton is the man behind the machine, and the very same guy who worked for Norton all those years ago, when they were leading the rotary charge on the race track with the iconic JPS Nortons. Working out of a garden shed in the Norton factory grounds, Crighton took it upon himself to prove to the Norton higher-ups that rotary power and motorcycles were a match made in heaven. Quickly making breakthroughs, Norton was, all of a sudden, back at the top of the timing charts. 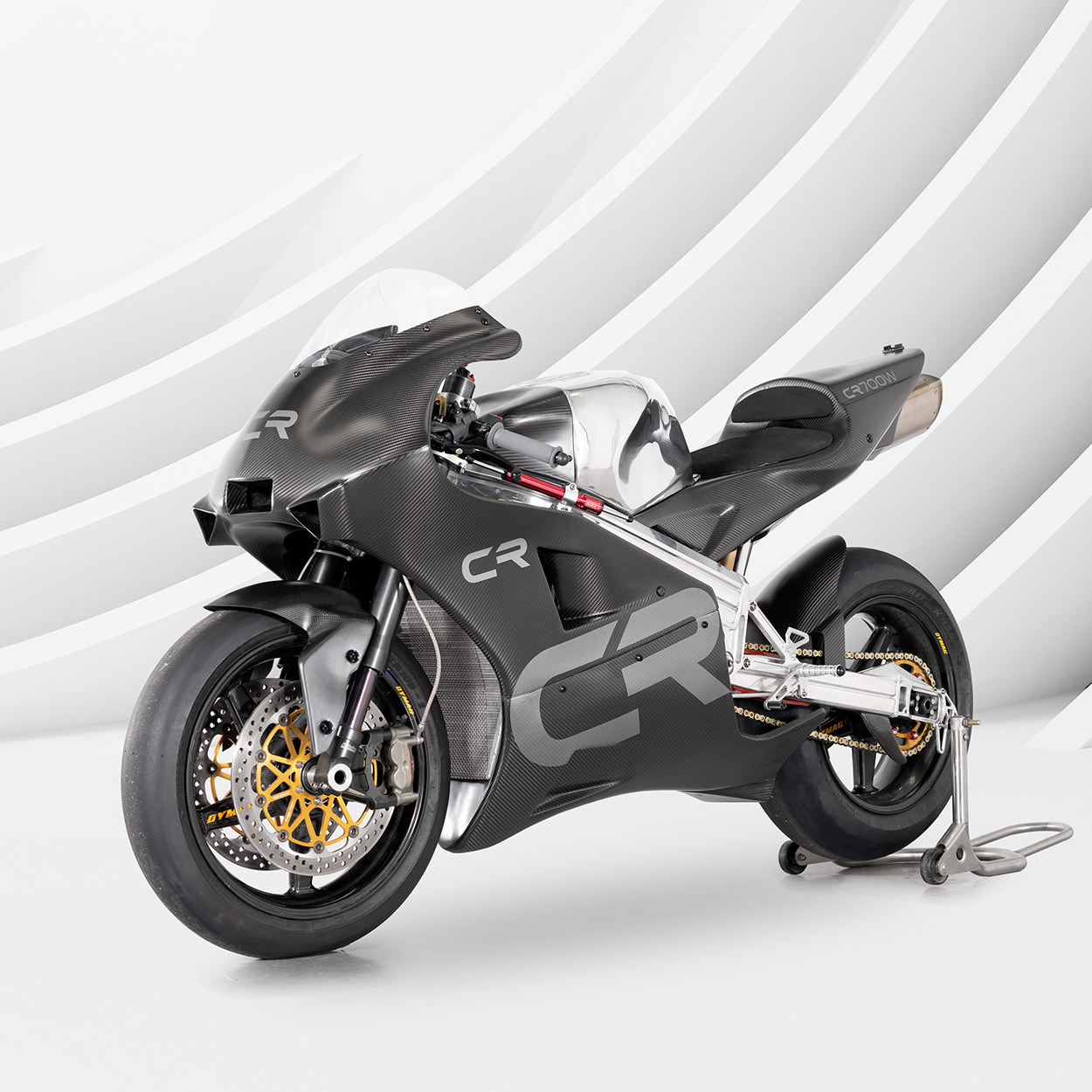 The Crighton CR700W is the direct descendant of those first rotary-powered Nortons. As if the aluminum frame, swingarm and carbon fiber bodywork weren’t impressive enough, the engine is the standout feature. An excerpt from their website puts it all into perspective: 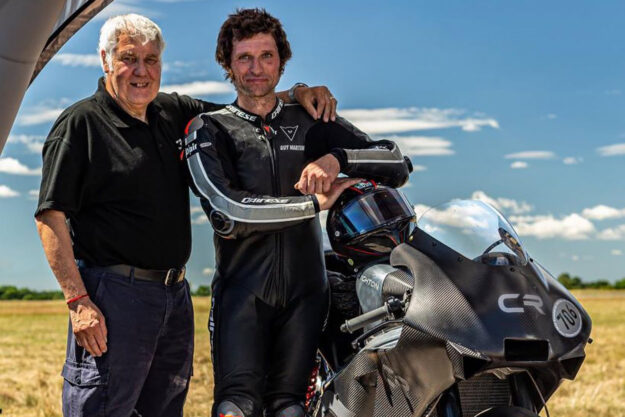 Piloted by Martin, the team have already cracked 188 mph, 16 mph faster than the previous record. With a myriad of options to choose from (like different gearing and fairings) it sounds like another record will soon be added to Martin’s already-impressive resume. [Via] 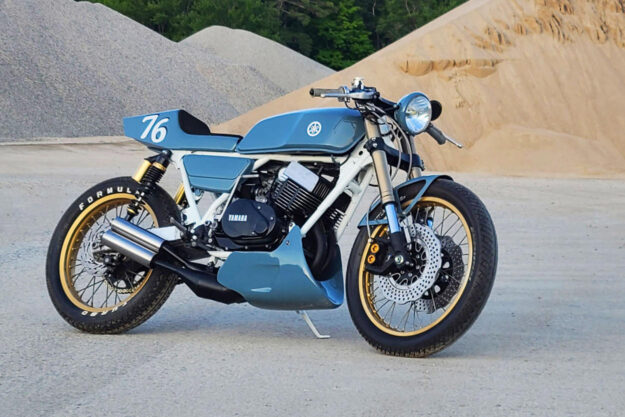 Yamaha RD400 by Coti Sanders Moving onto another bike that benefits from lubricated fuel, is this: a 1976 Yamaha RD400 built by Coti Sanders. Hailing from the south of Maine in the USA, Coti grew up with two-stroke dirt bikes and quads. When he got his first classic it was always going to be a smoker. 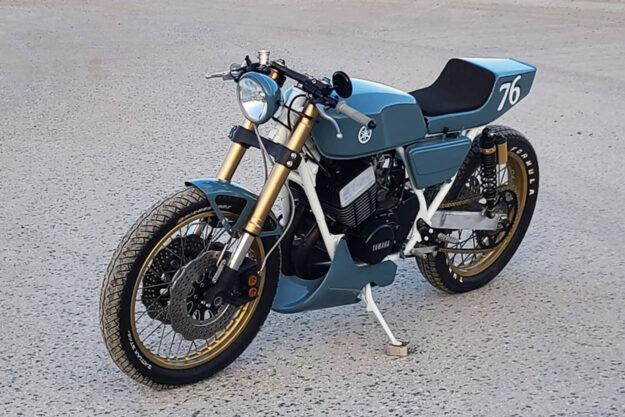 Picking up the RD400 12 years ago, it was around the time a certain global epidemic hit that Coti tore into the bike in earnest. Getting the party started was a complete front-end swap, donated by a Suzuki GSX-R.

The spoked front wheel is from a Suzuki GT750, rotating before a custom-made belly pan. The engine is running Banshee pistons, with the work to make them fit carried out by Coti himself. He also made the entire exhaust system. 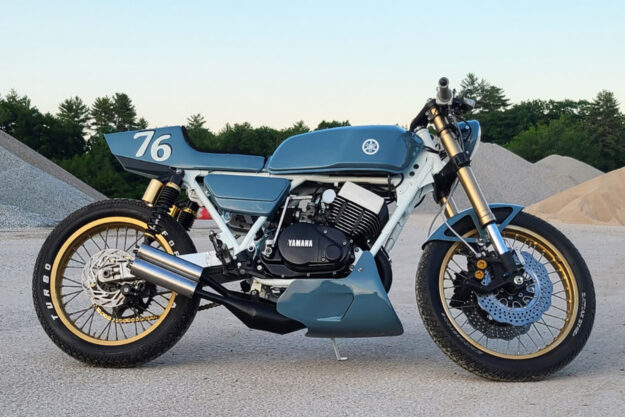 The tank is original, albeit treated to a fresh coat of Jaguar ‘Underhood Blue’ and a recessed fuel cap. The flat track style seat is new, and sits above the swingarm and rear wheel from a KTM. Coti, a self-confessed “cheap bastard,” found parts for the bike from all over, the aforementioned KTM parts coming from the local rubbish dump. 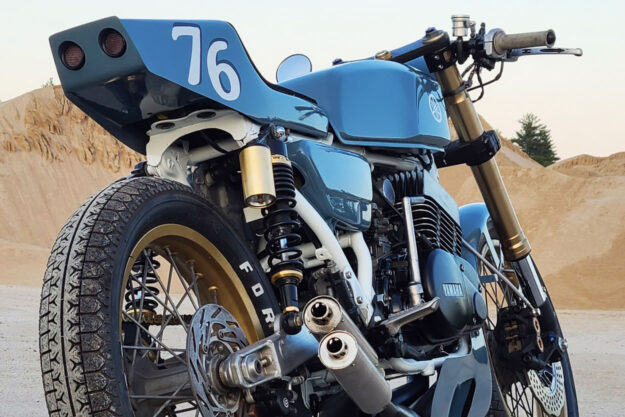 Even though the bike is quite literally a parts bin special, I think Coti has done a bang-up job. I’m not the only one impressed with his skills, either—Coti landed himself an invite to the Handbuilt Motorcycle Show in Austin, Texas.

With his first build under his belt, I’m excited to see what he comes up with next. [Via] 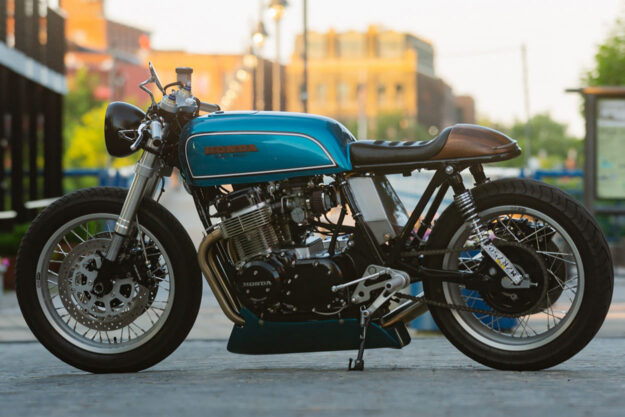 1975 Honda CB750F by Mile Zero Racers When I was getting into bikes all those years ago there was an incredible Honda CB750 that was featured on Bike EXIF. It has lived rent-free in my mind ever since, so to this day I have a soft spot for Honda’s legendary inline-four.

Thomas Manno of Mile Zero Racers has the same love for the CB. He rescued his from a seller on Facebook Marketplace in 2020. This means that has no problem finishing what he starts, as evidenced by two things. Firstly, the bike itself. Secondly, the fact that he actually followed through after the initial “Hi, is this still available?” 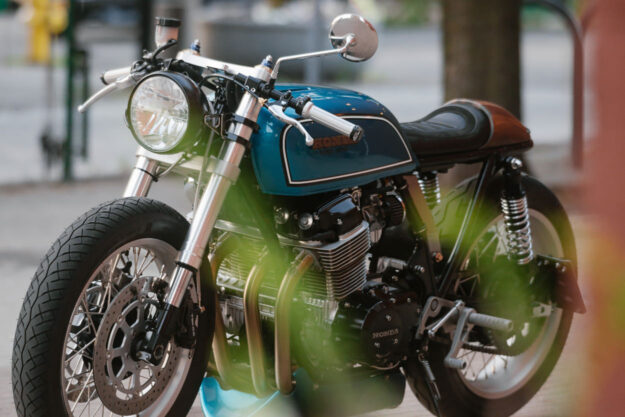 To top things off, Thomas was at college when he started his custom motorcycle journey, and also had little previous experience with wrenching or fabrication. Teaming up with Honda CB guru Mike Rieck of Cycle X to rebuild the top end, Thomas tackled the bottom end himself. Talk about throwing yourself into the deep end!

The front end is from a Suzuki GSX-R (this week’s custom bike builders front end of choice) which reportedly does wonders for the ride. The bike was rewired with a complete suite of Motogadget gear, and it looks like every nut and bolt was replaced at some point along the way. I particularly like the sporty-looking belly pan which barely hides the new four-into-one exhaust. 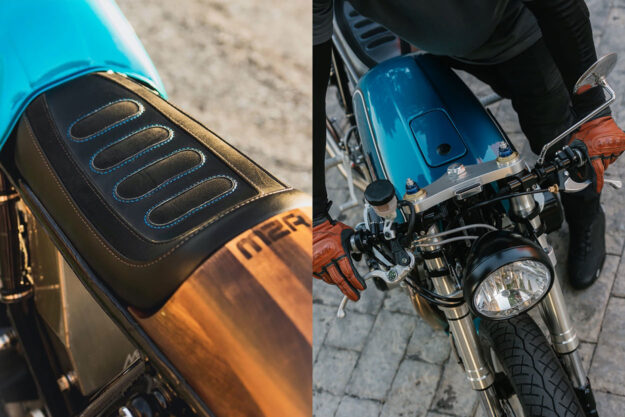 Traditionally motorcycles are more about metallurgy, but from the beginning of the build, Thomas wanted to add timber details. The tank badges and seat hump were made with help from a friend with woodworking experience. They really look the business, especially with how the tail light is recessed into the hump.

Thomas also took inspiration from Porsche Clubsport racing cars but wanted to retain as much of the CB as possible. All of my CBias aside, this is a cracking good build and it proves that you can do anything you set your mind to. [Via] 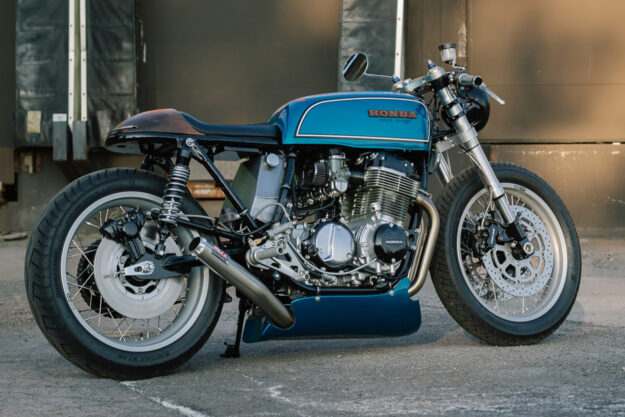