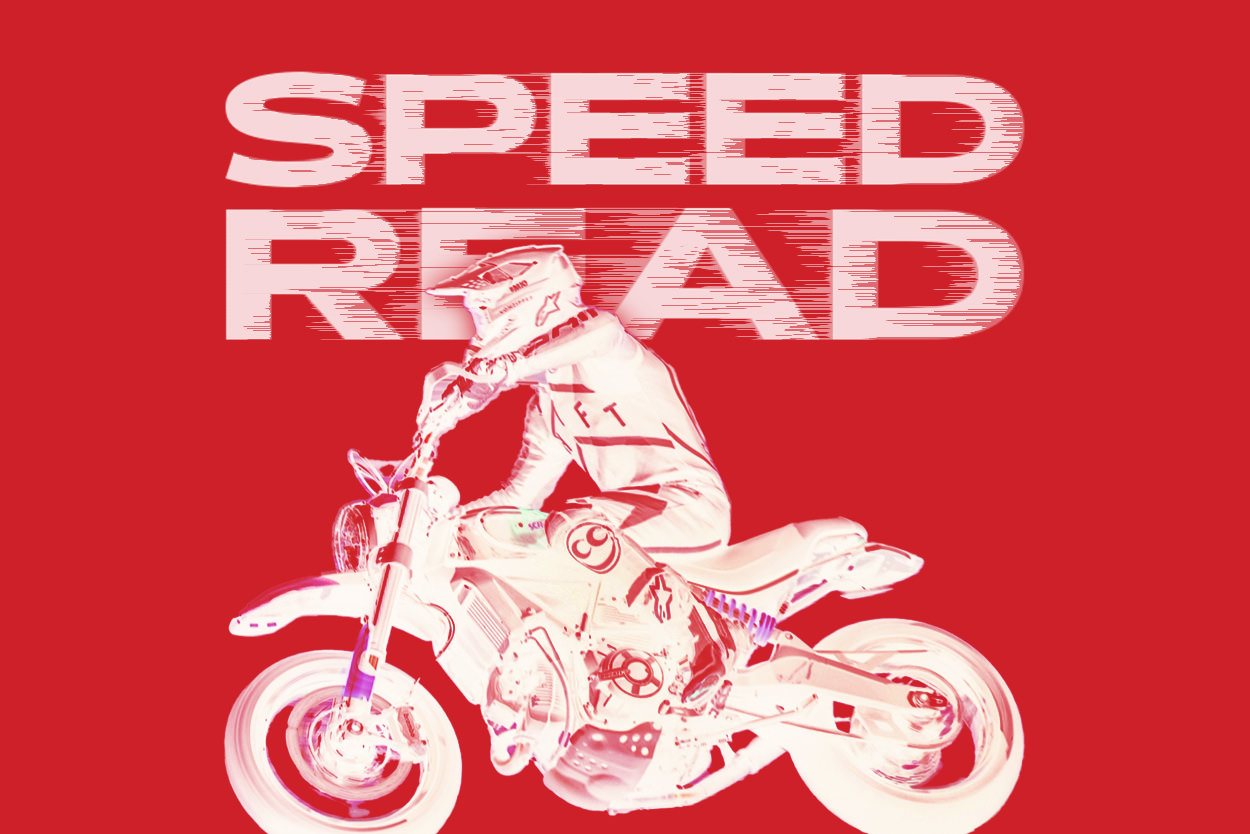 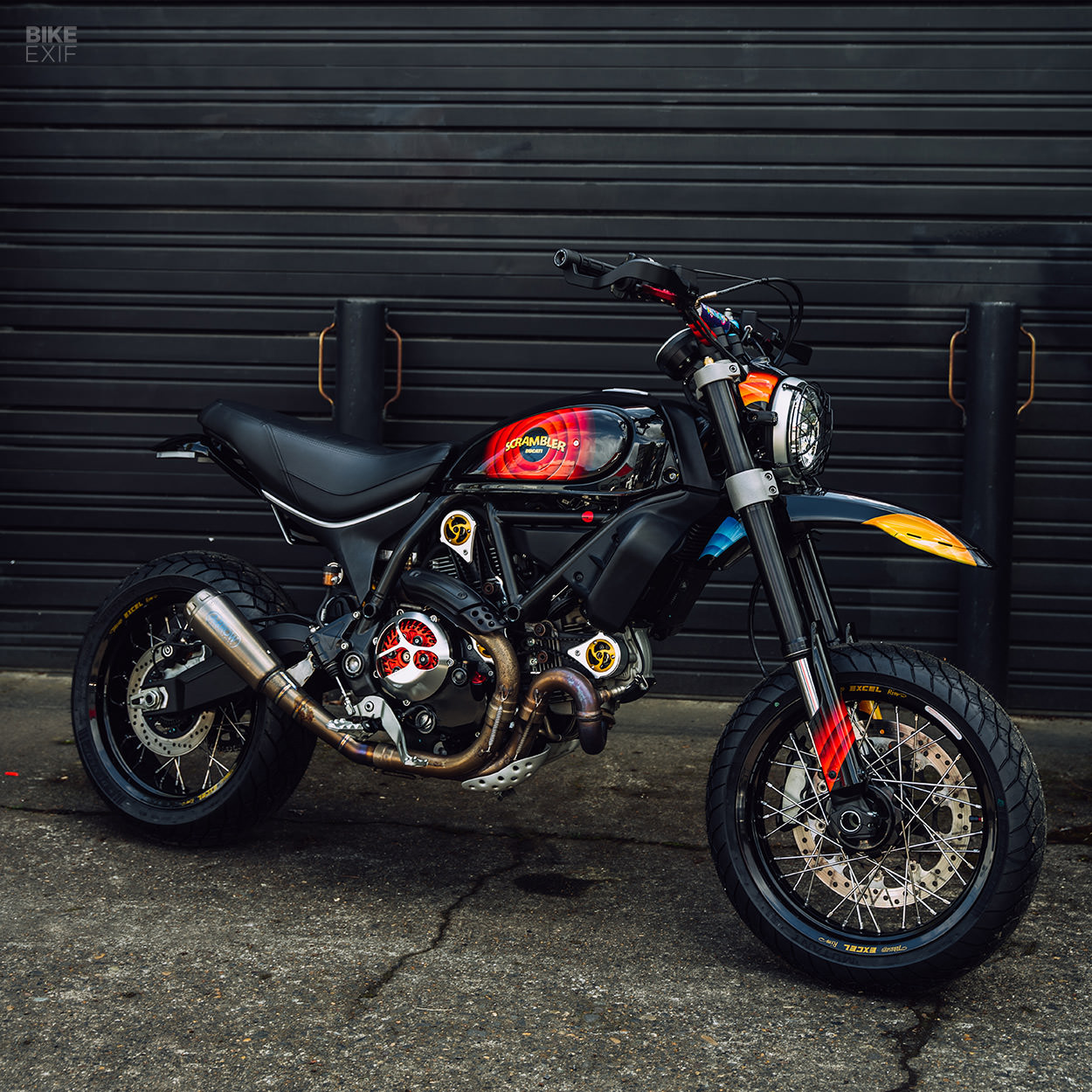 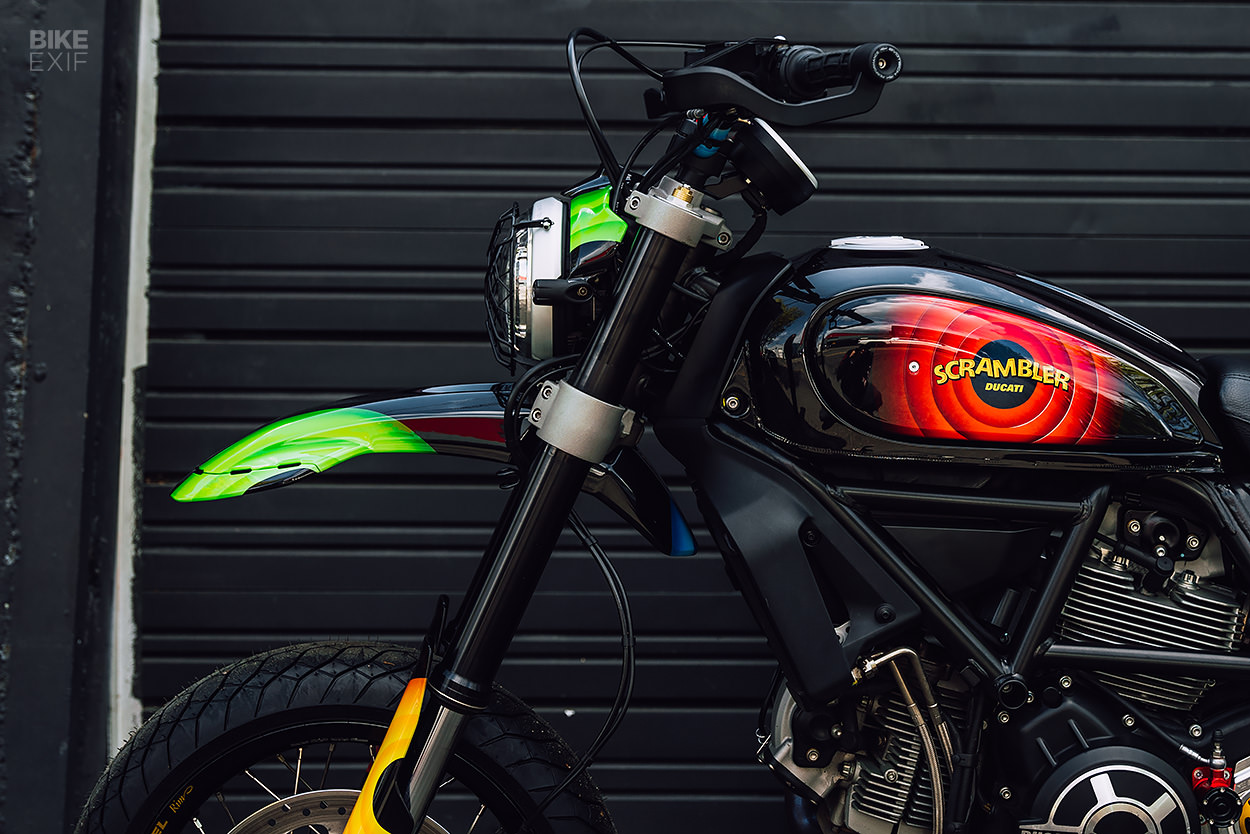 The story of this whacky Desert Sled starts with ex-NBA pro, Martell Webster, who originally commissioned it. He was partly inspired by Space Jam, and by how his grandmother used to keep him out of trouble by making him watch cartoons. So he got Eddie Slepicka of Bent Metal Customs to paint a set of Looney Tunes graphics all over it, while MotoCorsa attended to a wish list of trick parts.

The first set of upgrades included an Arrow exhaust, and a hydraulically-actuated dry slipper clutch from Kbike to replace the OEM wet clutch. Not only does it look rad, but it gives the bike that essential “hey bro something’s wrong with your clutch” Ducati rattle. 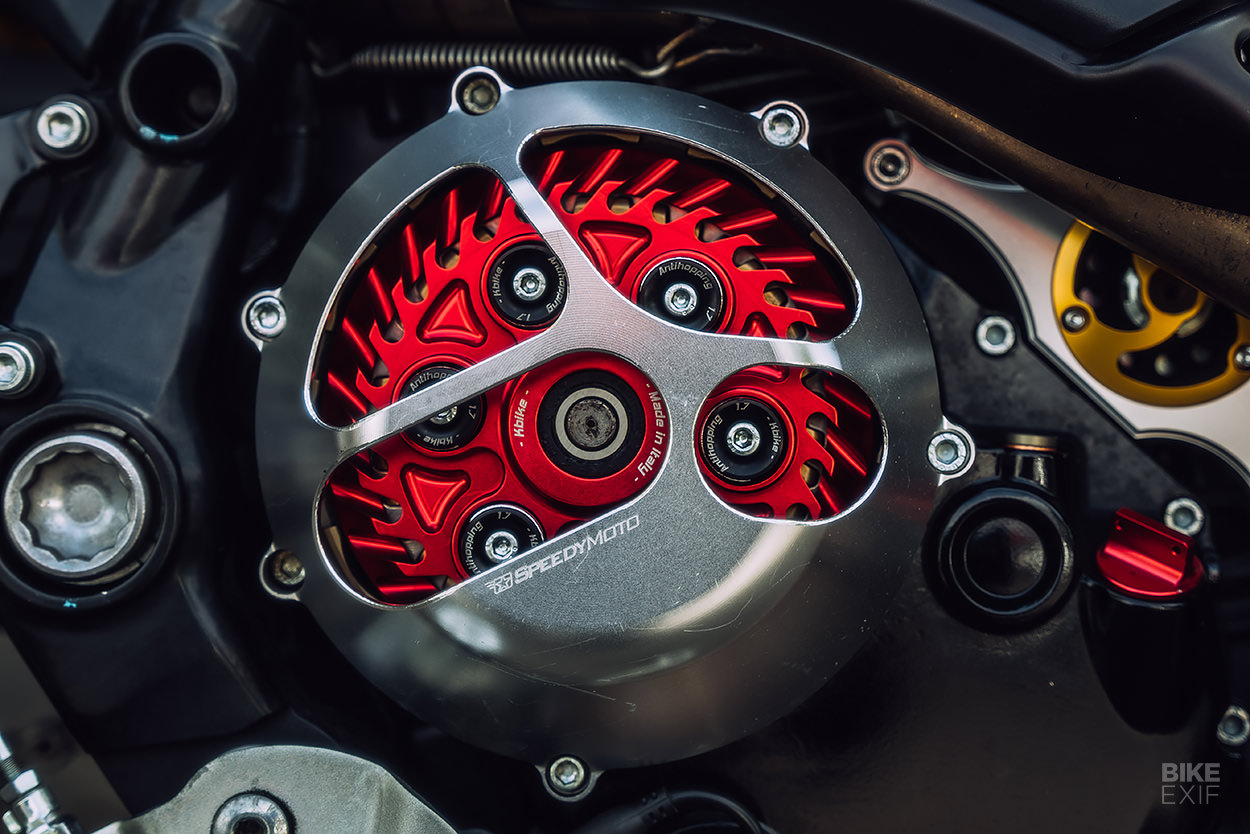 Martell originally used the bike to chase his kids around on their minibikes, but soon realized that a Zero electric bike was better suited to the task. So he asked MotoCorsa to sell it for him.

The bike sat for far too long—until the annual One Show rolled around, and MotoCorsa needed something for their stand. So they bought the bike from Martell and threw another round of changes at it. 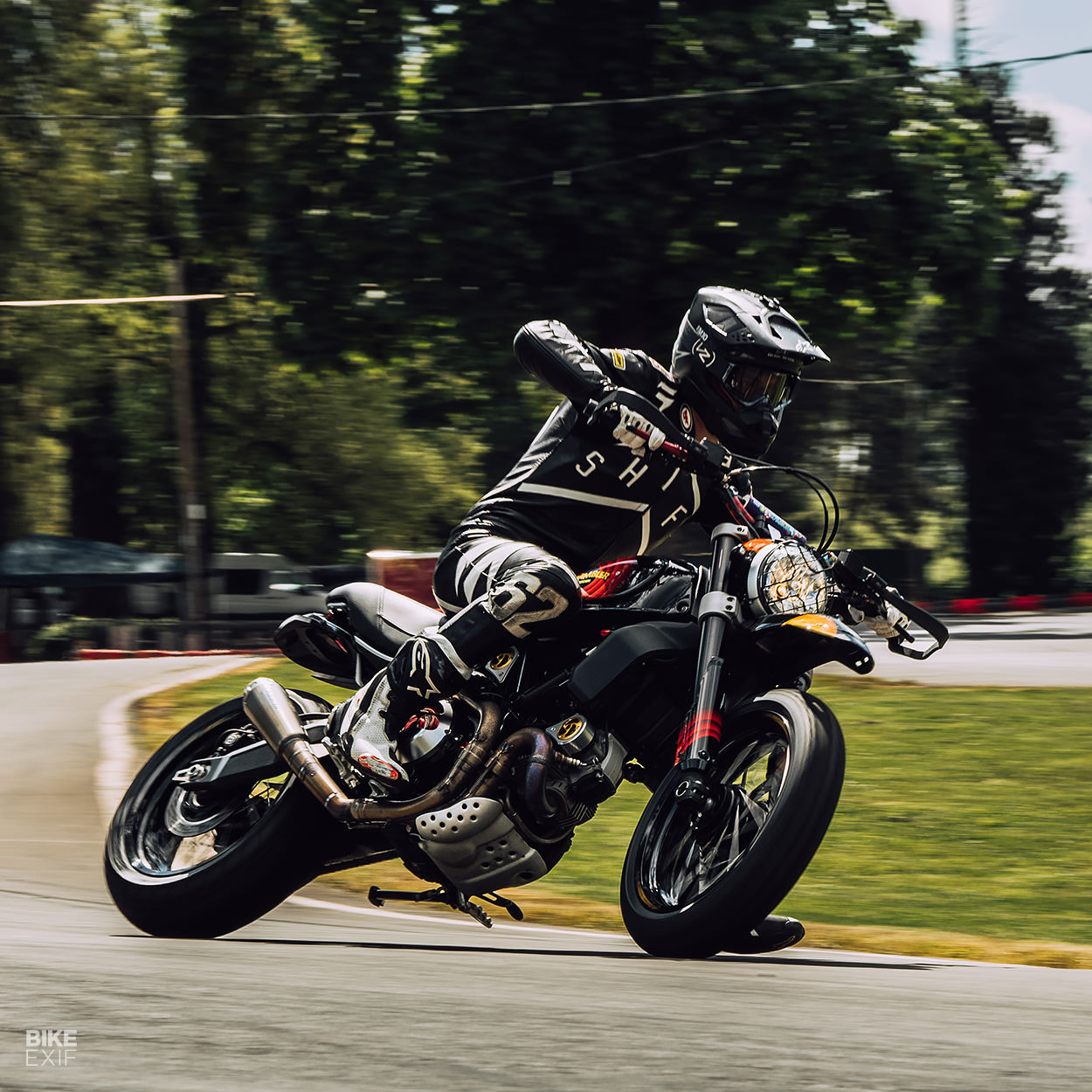 Top of the list was converting the Desert Sled into a supermotard, so the crew slapped on a set of 17” wheels, built by Dubya in California with black anodized Excel rims. Dunlop Mutant tires were spooned on for a mix of supermoto steeze and real world usability. The team also tidied the tail up with a New Rage Cycles rear fender kit, complete with LED turn signals, and installed Ducati Performance LED turn signals up front. 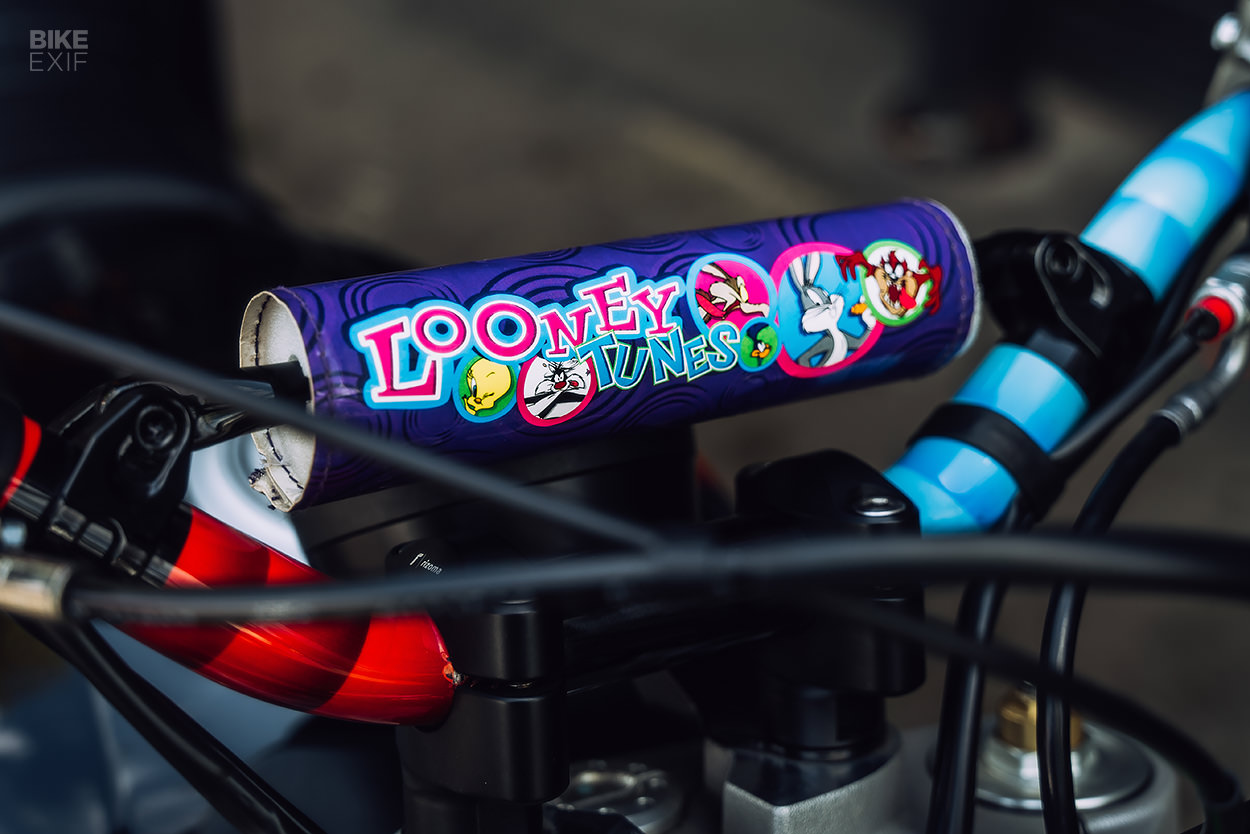 Now that ‘Daffy Duc’ is complete, and the One Show is over, it’s for sale again. Go on, you know you want it. [MotoCorsa | Images by Mike Luci] 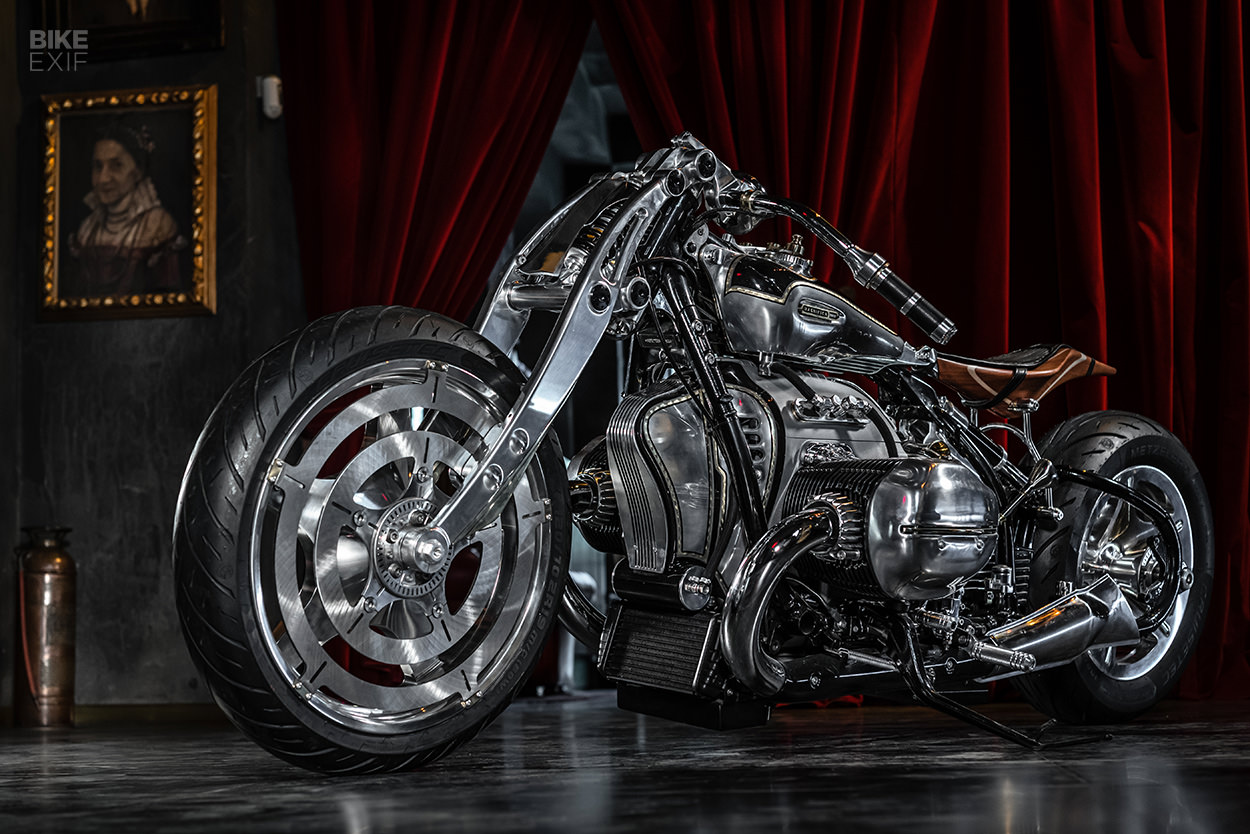 BMW R18 by Radikal Chopper A lot of BMW R18 customs we see are simple nip-and-tuck jobs. But honestly, if you’re customizing the biggest boxer motor-powered bike that BMW has ever made, shouldn’t you go all-out? That’s what Radikal Chopper in Milan did.

The commission for this extravagant R18 came from Raffaello Polchi, the owner of the Officine Riunite Milanesi bar in Milan. 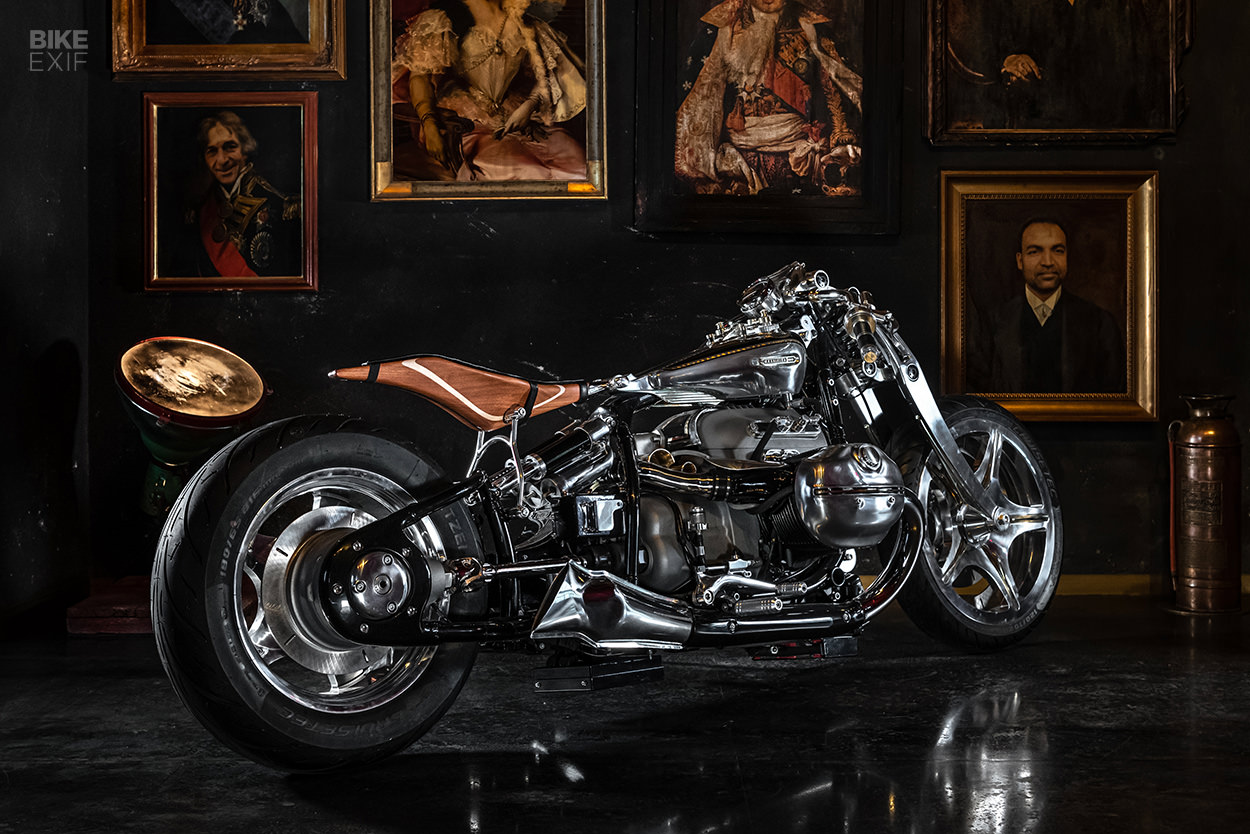 Andrea Radaelli at Radikal Chopper got the call, which means that Raffaello was clearly not after something mild. Andrea is an award-winning builder with a reputation for doing things that are, well, radical.

“The bike has to be my own creation,” he says. “I don’t feel like dredging up or modifying a concept already set up and done very well by others.” 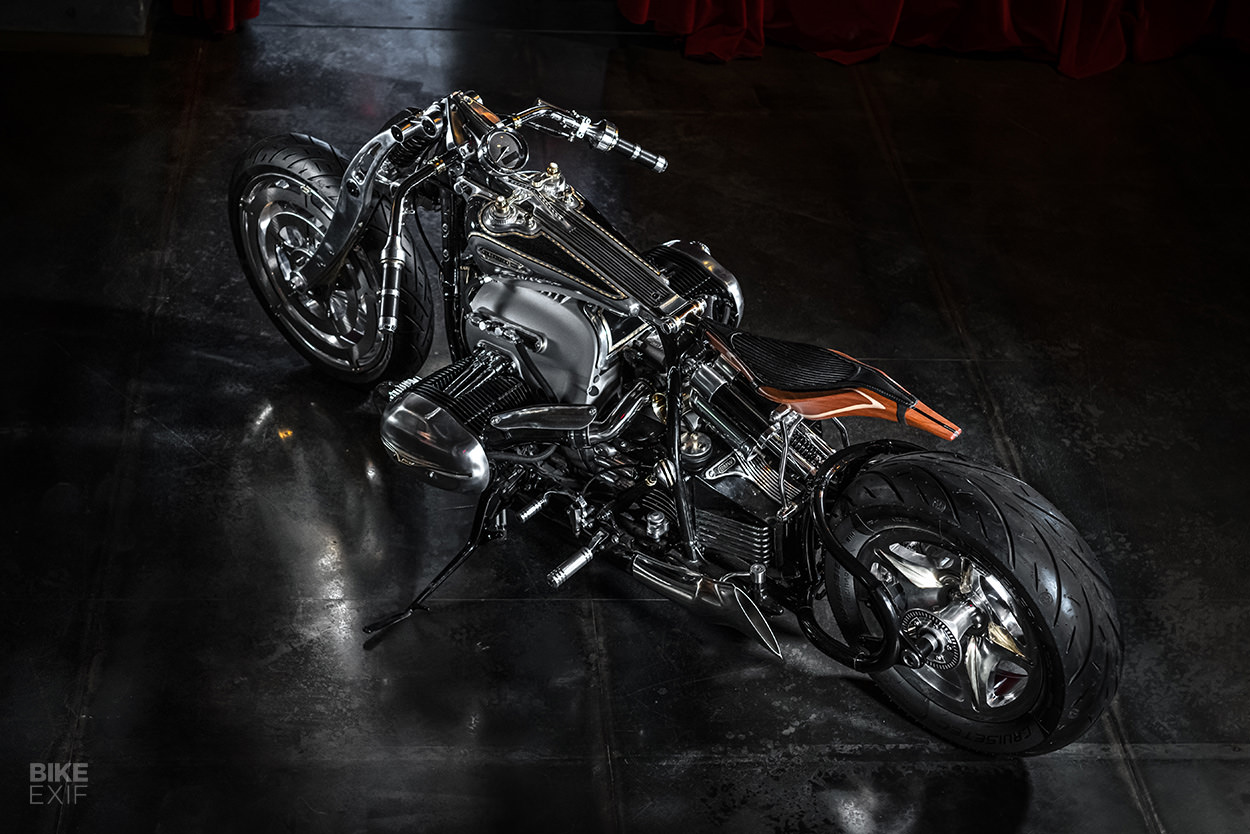 He says his inspiration came from the BMW motorcycles of the 1920s through to the 1940s, and the BMW R37 in particular. But he’s thrown everything at this build, creating a potent cocktail of aluminum, brass and even wood.

Almost everything you see here was shaped by hand, working from a simple concept sketch. The wheels are one exception—they were machined from billet aluminum to Andrea’s spec. The brakes are custom too, as are the forks. 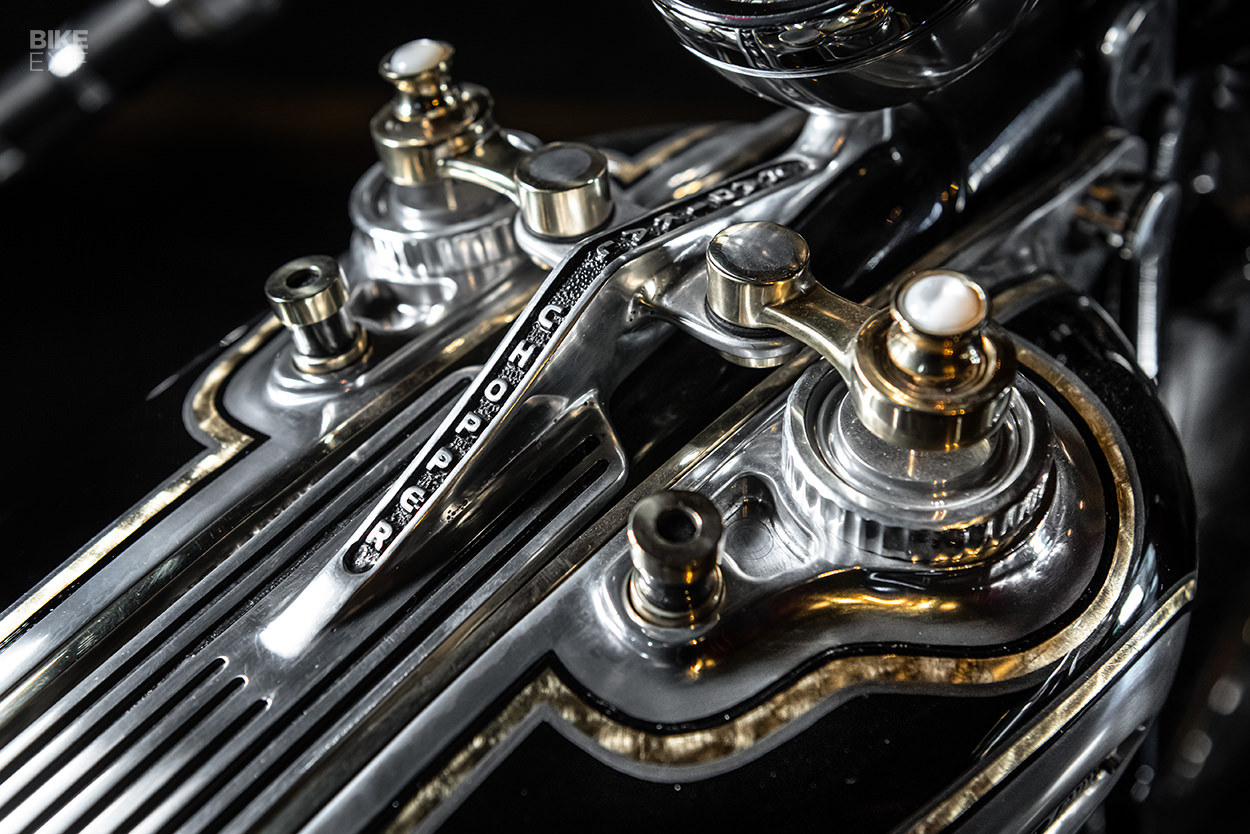 Andrea’s craftsmanship is on full display here. Note the finned cover on the front of the engine, and the way that motif is repeated on the underside of the fuel tank. And check out the dainty subframe on which the custom-made wooden seat unit floats.

Keen eyes will also spot the lack of a clutch lever. Instead, there’s a foot clutch and a hand shifter lower down; a first for the R18. But that’s the only major change to how the bike is operated—it still has its original speedo and wiring, and even the wheel sizes are standard.

Despite how unapologetic it is aesthetically, this R18, dubbed ‘Magnifica,’ actually weighs 100 kilos less than the stock bike. We also have to high five Andrea for replicating the R18’s fishtail exhaust design, but at a reasonable size. [Radikal Chopper] 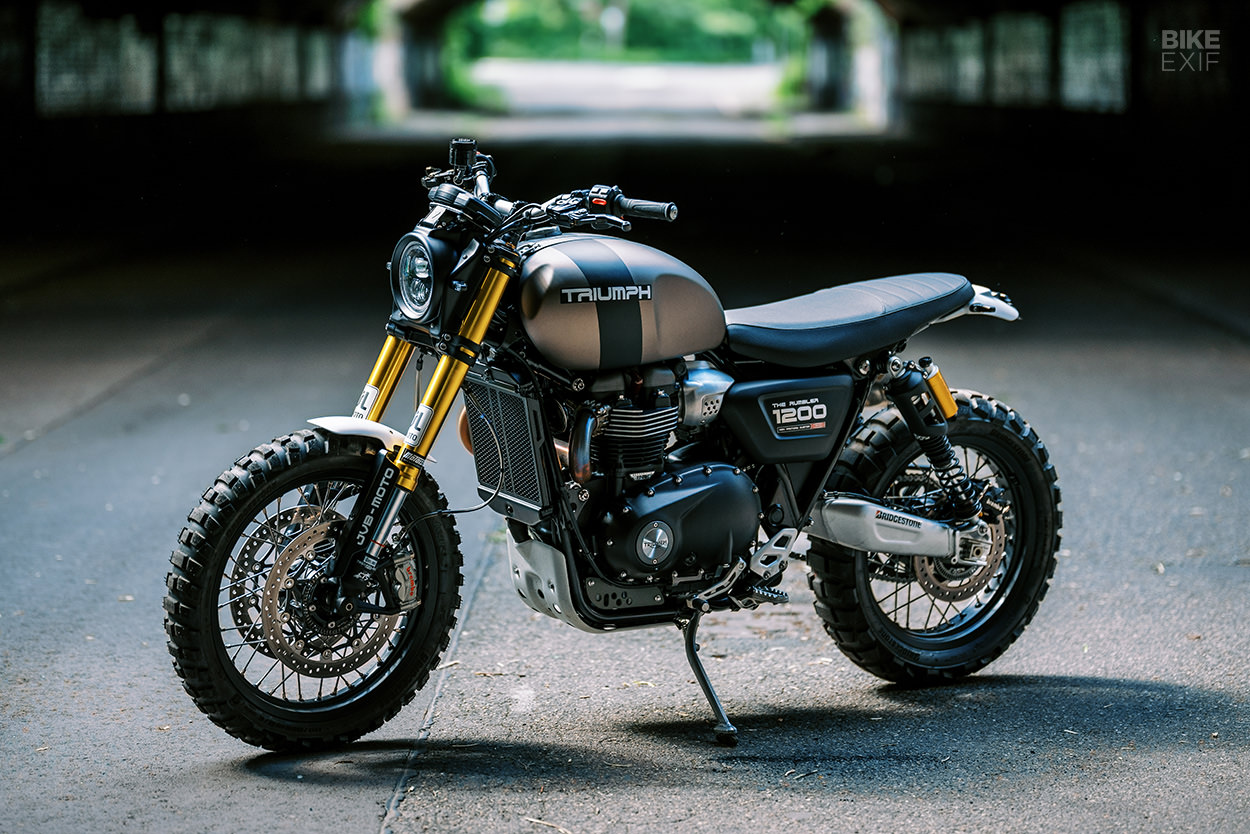 Triumph Scrambler 1200 by JvB-moto and JSL Moto Of all of Triumph’s modern classics, the Scrambler 1200 is probably the hardest one to customize. That’s because it looks so good out the box—right down to its slim seat and twin reverse cone mufflers. But if there’s one thing Jens Vom Brauck is good at, it’s fine-tuning a bike to visual perfection.

The man behind JvB-moto has done such a fine job with the Scrambler 1200, that, to the untrained eye, it looks almost factory. But the more you unpack it, the more you realize just how much he’s improved it. 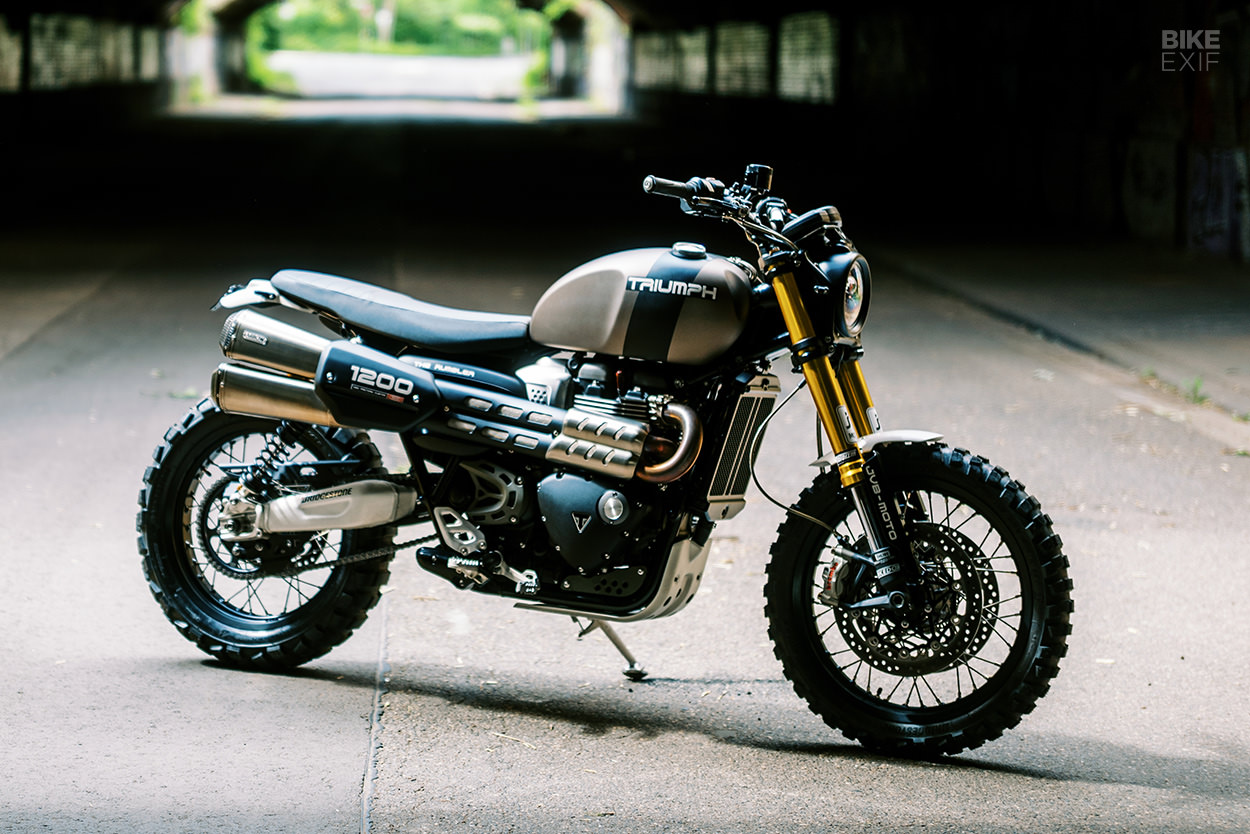 The project is a homage to a bike that Jens released ten years ago. Called ‘The Rumbler’ and built using an air-cooled Triumph Scrambler, it was built in collaboration with Jochen Schmitz-Linkweiler (former owner of LSL Motorradtechnik) for Uli Brée, the organizer of Triumph Tridays. The bike was a hit, and the guys recently got to talking about the possibility of repeating that success.

Jens explains that he wanted to make the Scrambler 1200 “more modern, compact and powerful, just like it feels. The design language had to be more modern and more minimalist, without losing the classic proportions and some vintage design clues of the stock bike.” 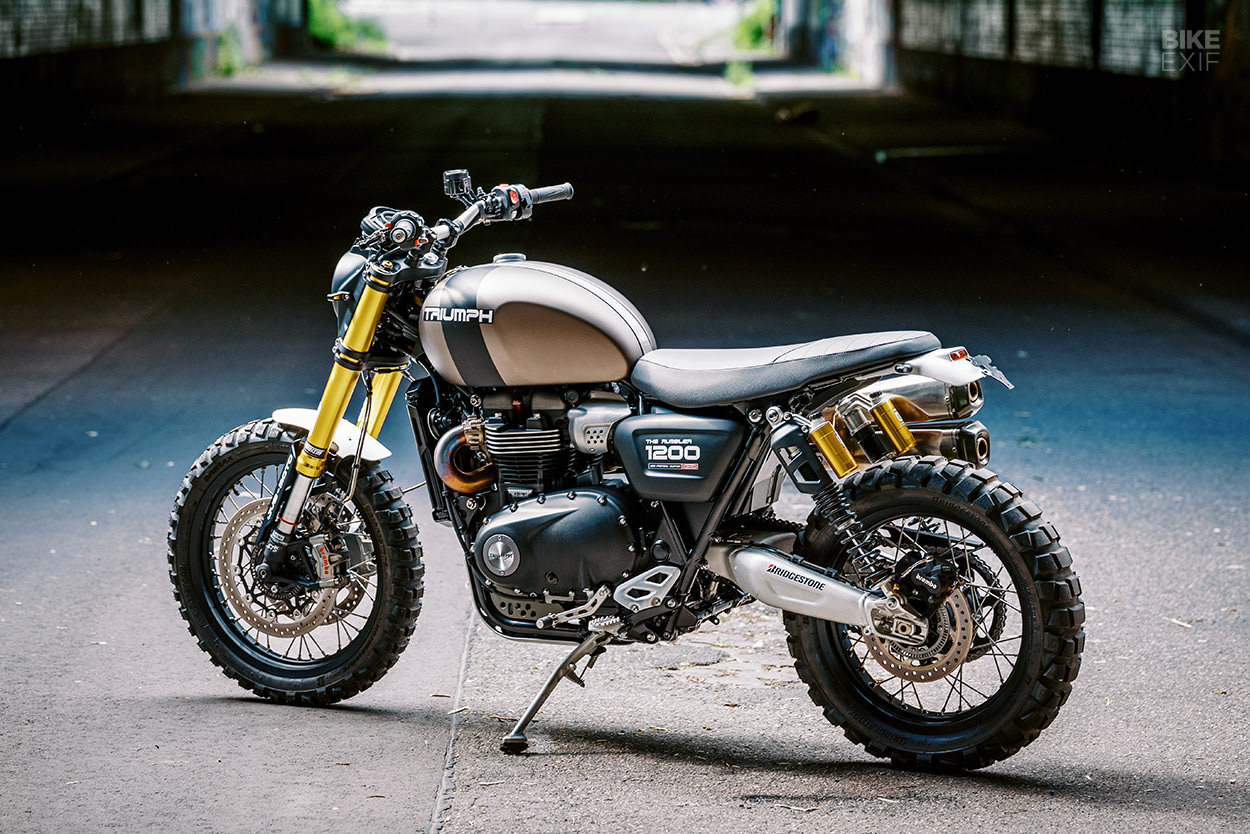 JvB-moto actually produces parts for air-cooled Triumph Scramblers, but none of them fit the new Scrambler 1200—so Jens had to start from scratch.

Up front, he designed a new headlight nacelle and dash mount, framed around a new LED headlight. The design is so compact, that the dash is actually designed to flip up to access the steering lock. 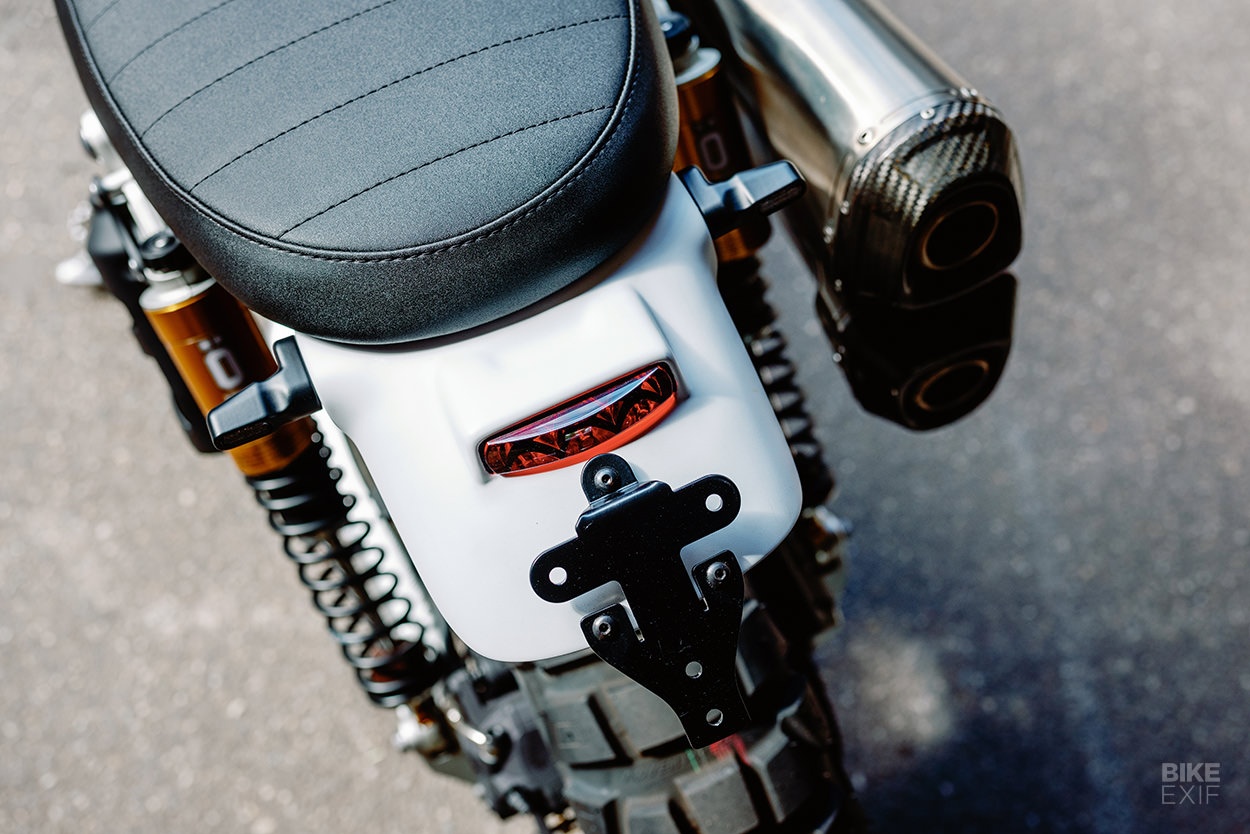 Other JvB-designed parts include a new left hand side cover, a new exhaust heat shield, the front fender and fork guards, and a slim rear fender with an equally slim LED taillight. The seat was reshaped to suit the new design, and recovered in a weather-resistant fabric. Slick little 3D-printed turn signals from Motoism were fitted at both ends too.

While Jens was busy with all of that, Jochen (who now operates as JSL Moto) went to town on the Scrambler’s running gear. He fitted a 19F/18R wheel set, then shortened the suspension to match. Handlebars and levers from LSL, Arrow mufflers and Bridgestone tires round out the parts spec. 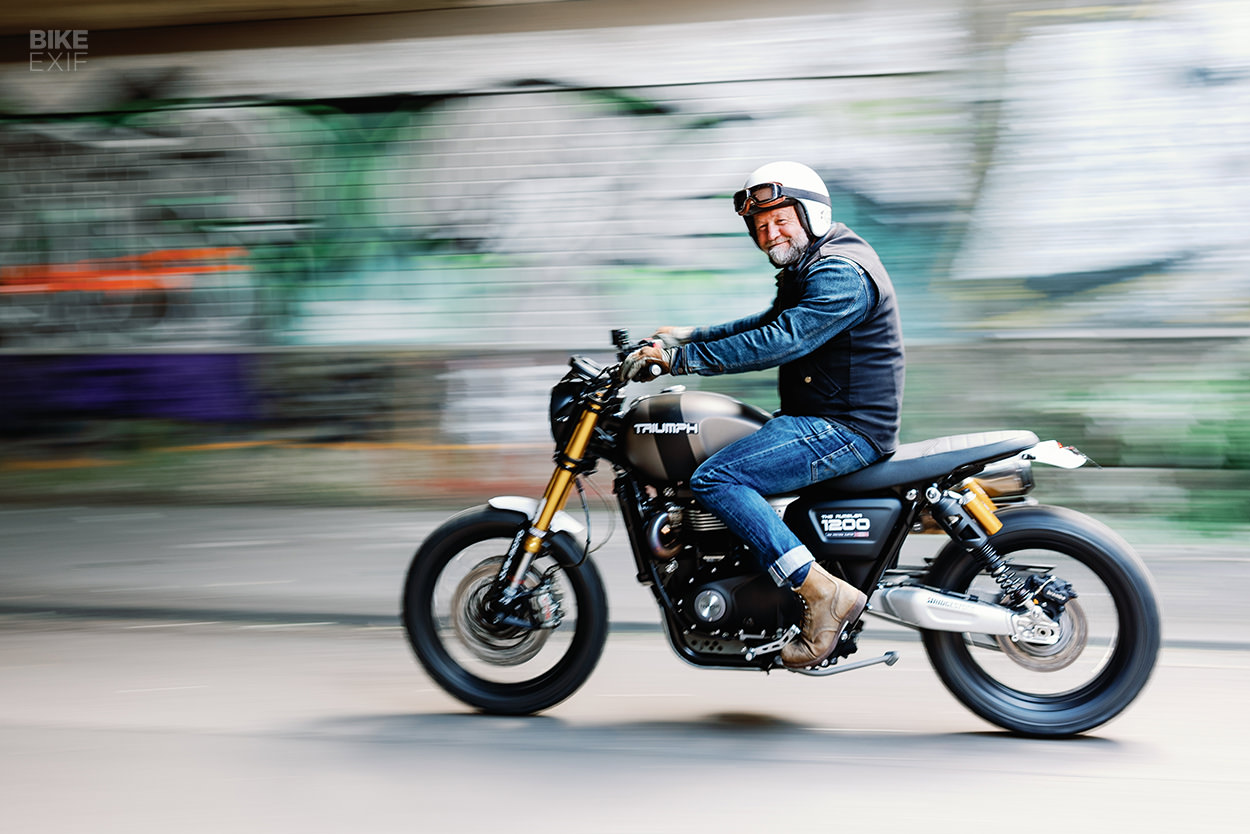 The other simple, but highly effective, change is the color scheme. The tank wears a no-nonsense matte paint job—and a number of parts have either been de-anodized, polished, painted or coated. Just like the original Rumbler, this Triumph Scrambler means business. [JvB-moto | JSL Moto | Images by Marc Holstein] 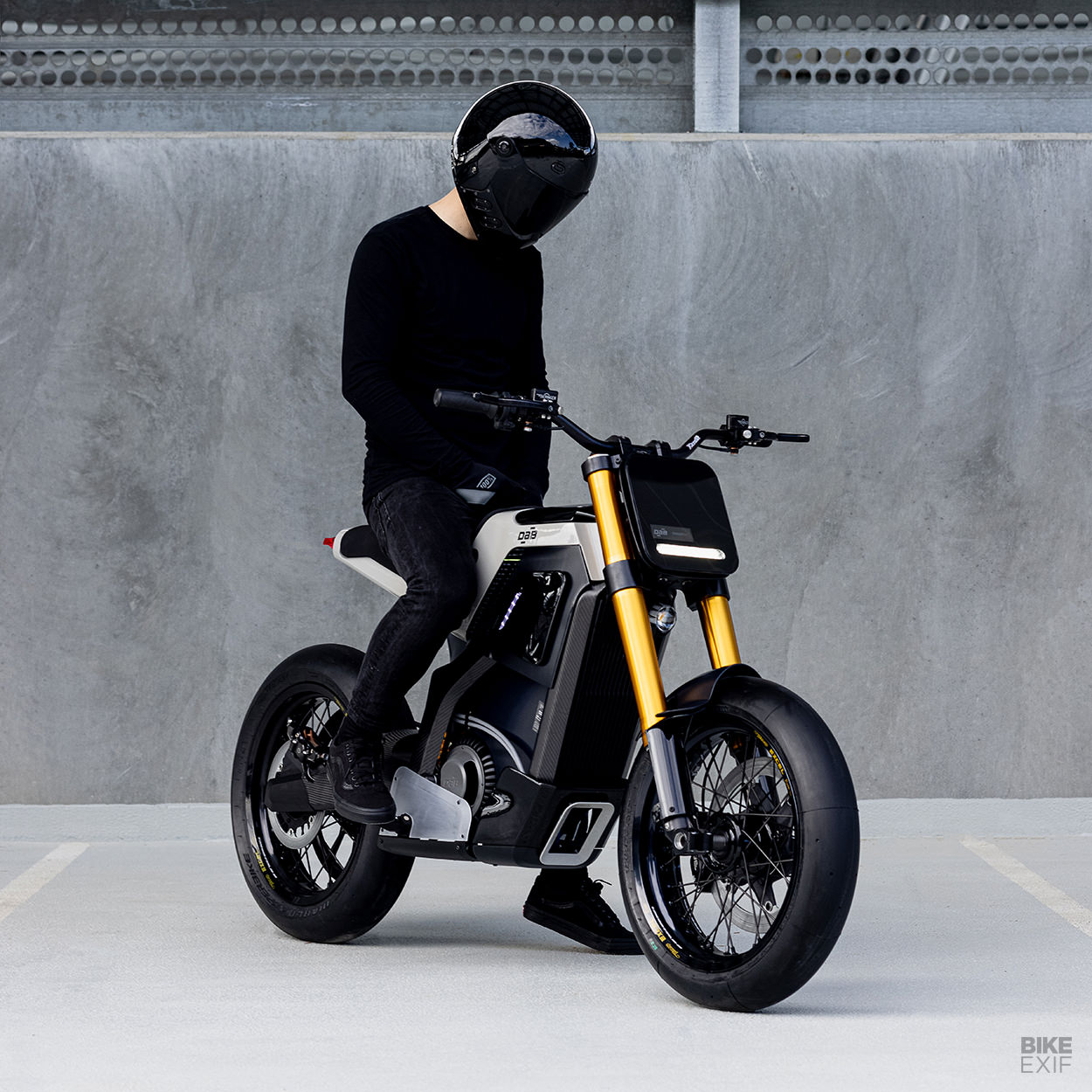 The show will feature familiar faces like Hookie Co. [below], JvB-Moto, DAB Motors [above], Trevor Motorcycles, Super73 and Zero. The program includes everything from a custom bike exhibition to test rides, plus it’s a great opportunity for small electric start-ups that have only been online until now to make their physical presence felt. 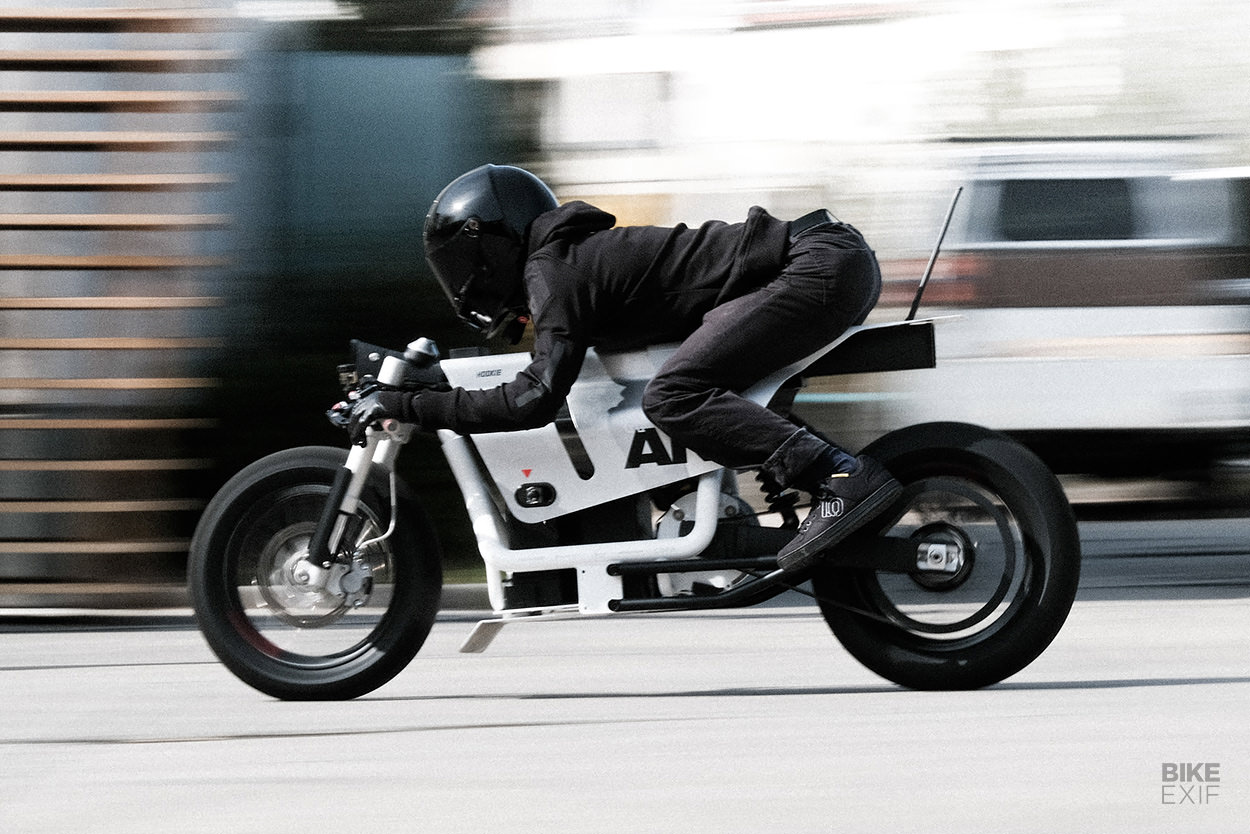 Reload Land runs from the 24th to the 26th of June, at Craftwerk.Berlin—a 33,000 square foot, double story community workshop. Entrance is free, and there’s a ‘silent’ ride out on the Saturday evening, followed by an afterparty at Deus Fountain Berlin.