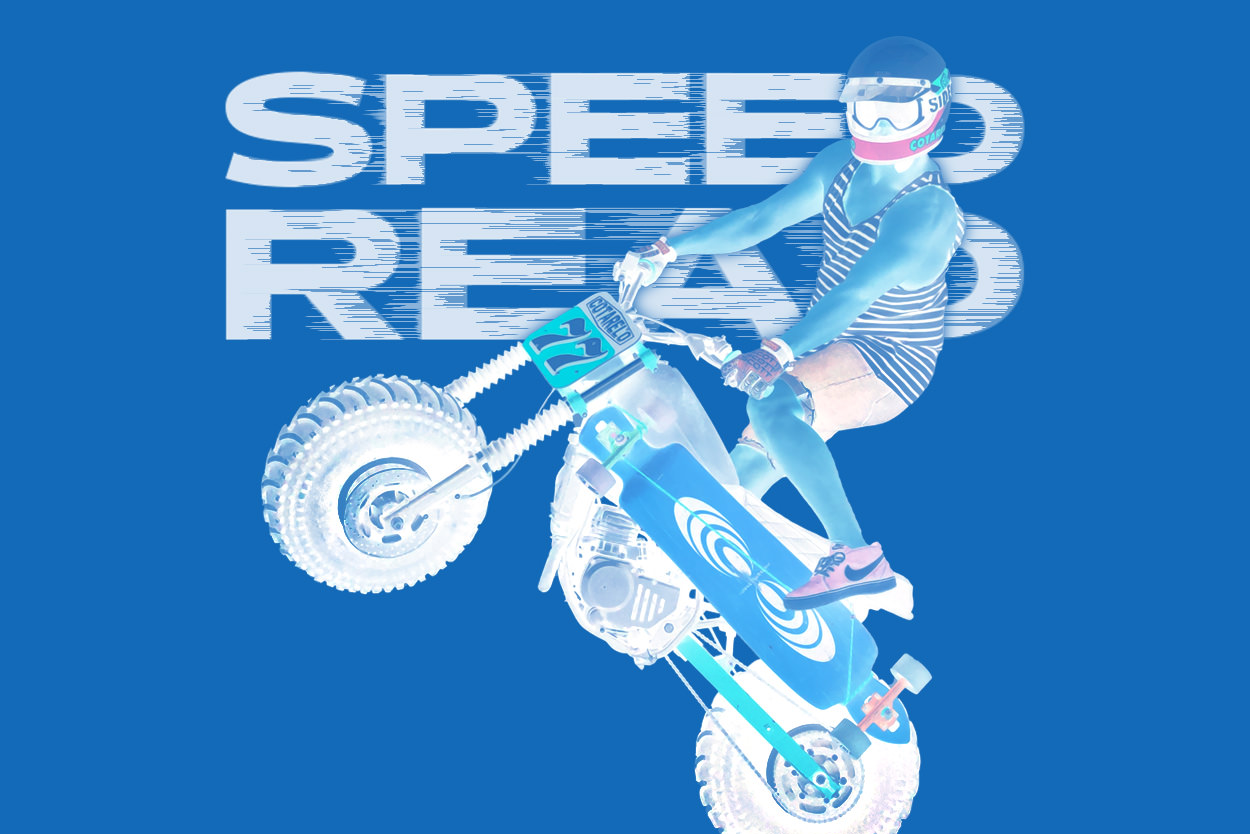 Ever heard of the Fantic Koala? Educate yourself below, then check out an unlikely BMW R1100RS café racer, a rare Bonneville TT Special, a lively Ducati Panigale V4S and a Yamaha XSR900 from Deus. 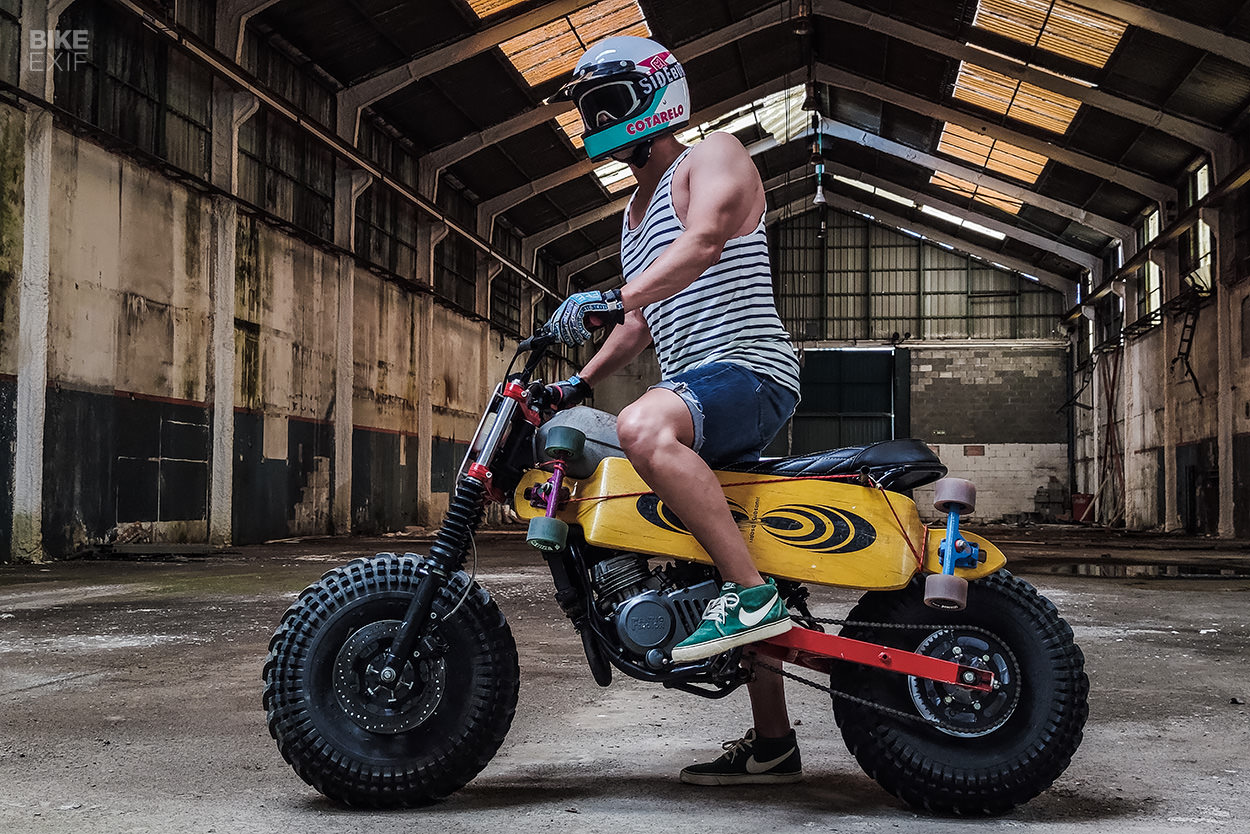 Fantic Koala by Animal Motor Company I’ll be completely honest, I’d never heard of the Fantic Koala until Wes sent me this set of photos. So, until I’m locked away for this heinous crime, I might as well tell you a bit more about this bike.

This is a 1987 Fantic Koala. It’s an 80 cc two-stroke, and apart from the engine it’s pretty much an Italian Suzuki VanVan or Yamaha TW200. Sadly, Google won’t tell you much much more, but looking at these pictures does make one thing clear: they’re a whole lot of fun. 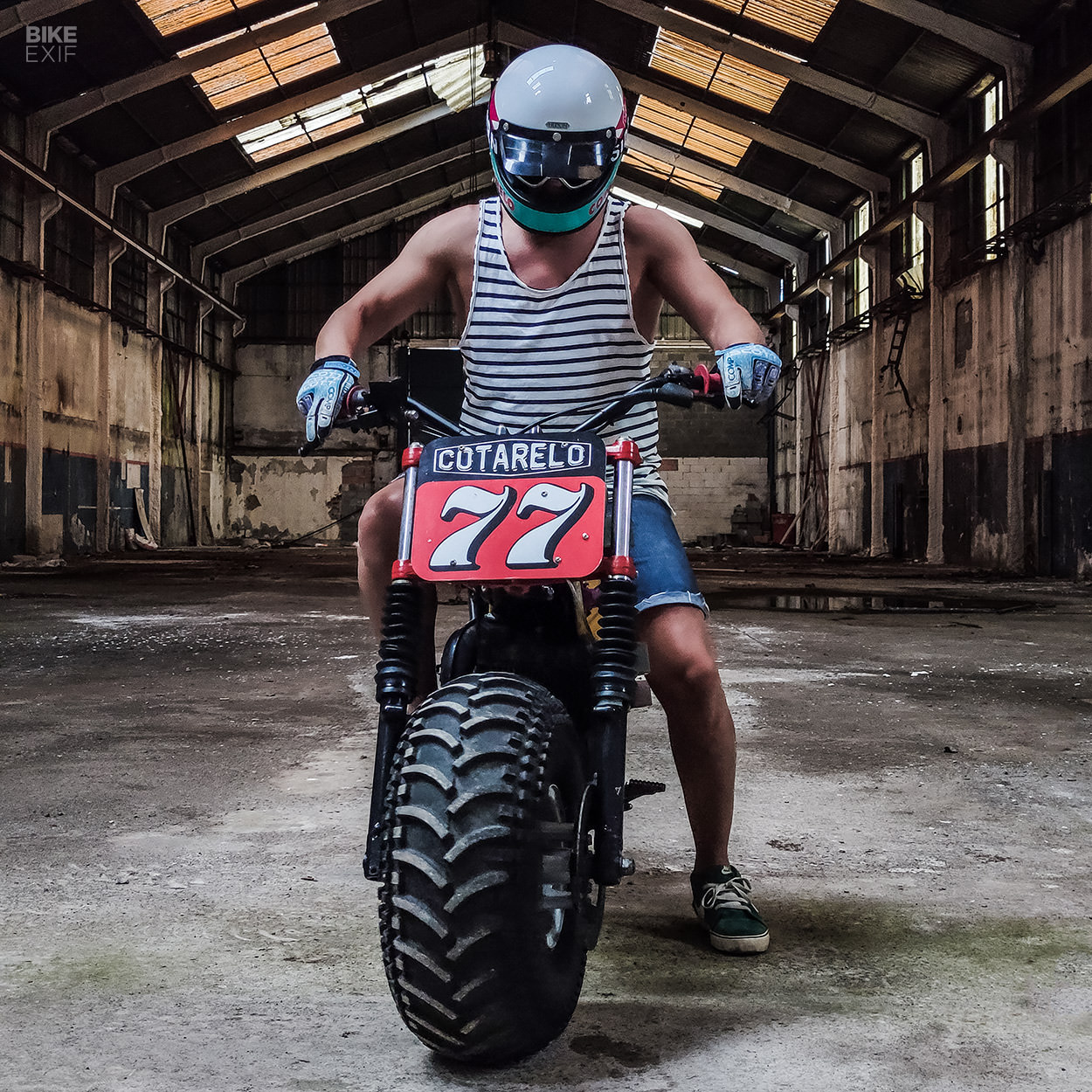 This particular example was customized by Ruben Cotarelo of Animal Motor Company, and it was pretty much incomplete when it arrived at their workshop. If I can’t even get information on the bike from Google, I’m going to assume that getting original parts is also somewhat difficult. From this, I can see why Ruben chose to customize, rather than restore. 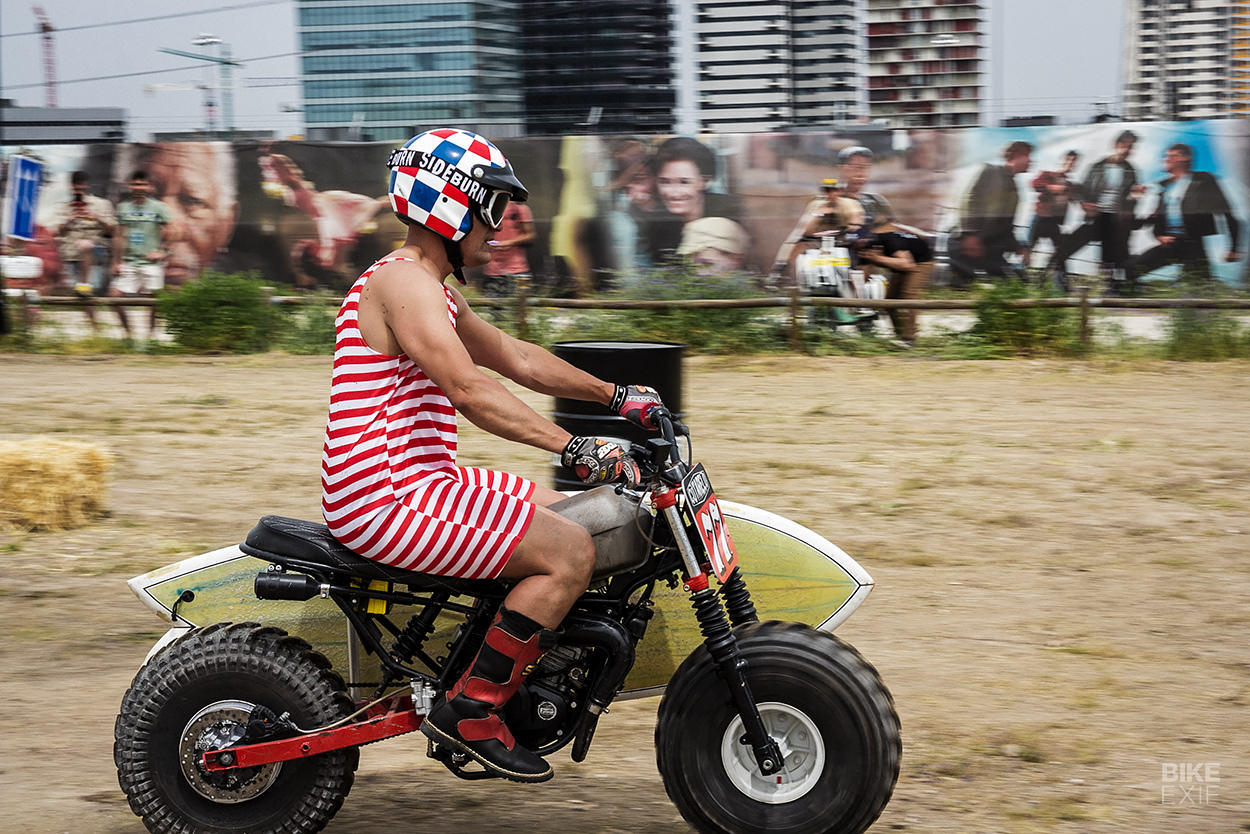 The huge balloon tires are the factory size so there is only one purpose for this bike—off-road adventures. Animal decided to lean into this and build a beach cruiser. The factory motorcycle features dirt bike-style plastics so they were all discarded in place of custom bodywork.

A new tank, flat seat and Renthal handlebars have transformed the diminutive Fantic into a very good looking street tracker. The number plate up front hides the coolant reservoir, and bolted to the left side of the bike is a surfboard/skateboard rack. 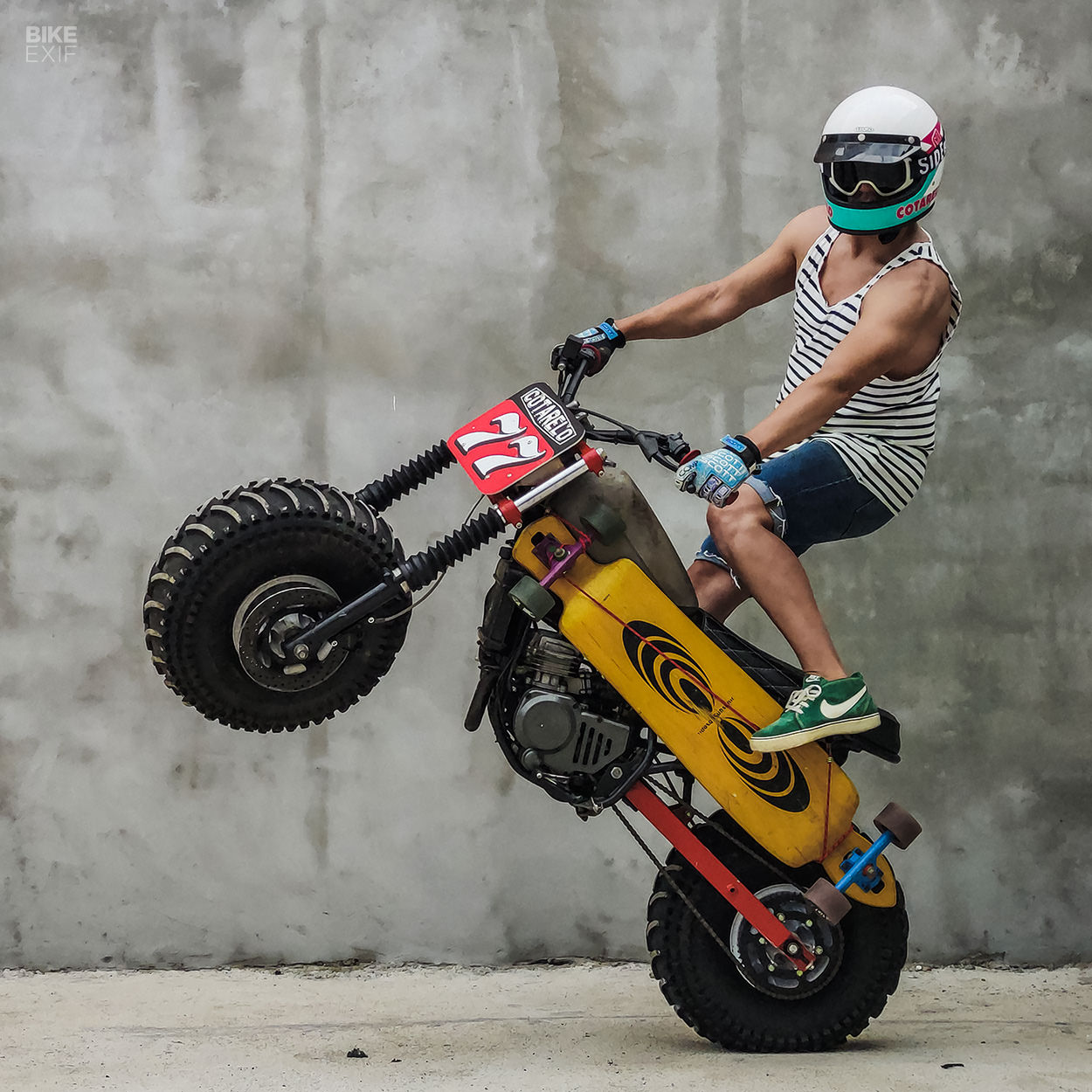 There are no lights (or even a license plate) that I can see. However, if all you need is something to run you up and down dirt tracks to hidden surf spots, I can’t think of a better mode of transport. [Animal Motor Company] 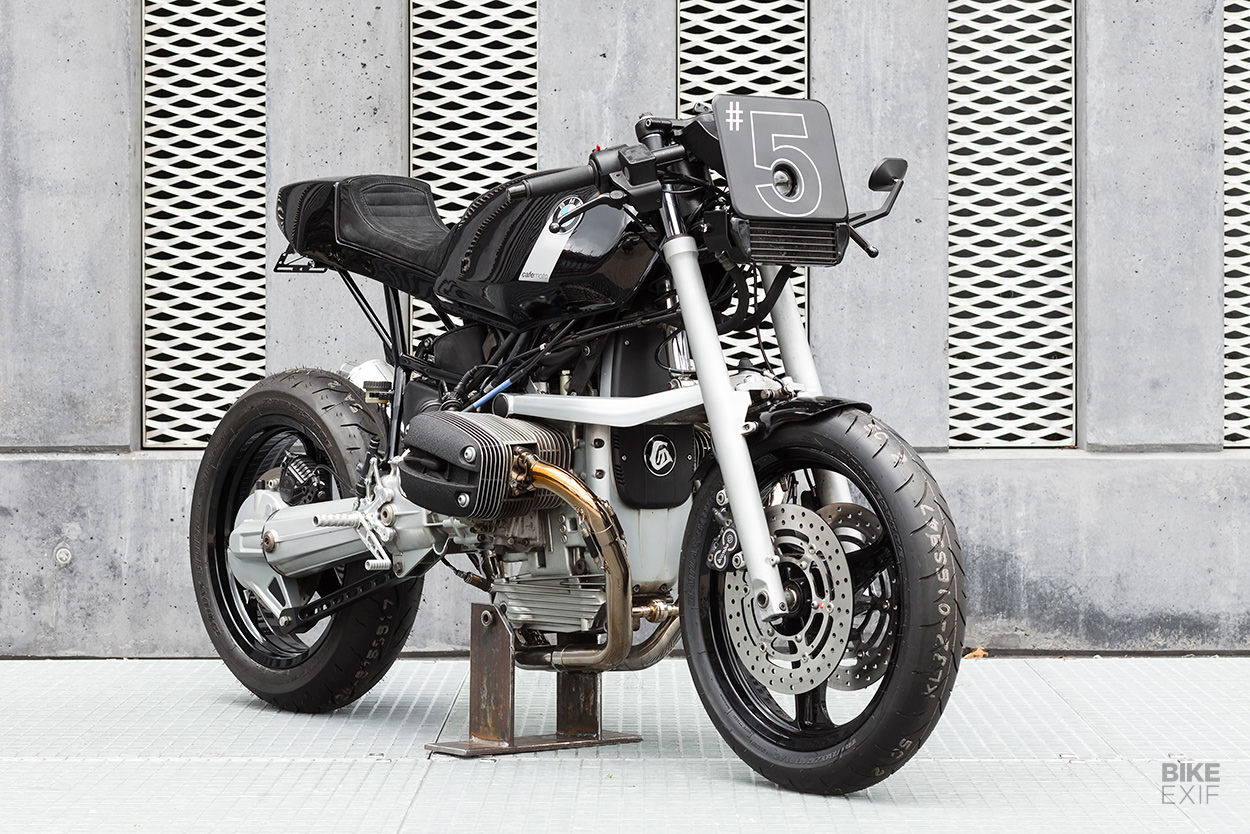 BMW R1100RS by Cafemoto I don’t think anybody has ever referred to the BMW R1100RS as svelte. Sure, it’s lighter than a Goldwing, but at 540 lbs wet, it’s not exactly a purebred race bike. Georg Godde and Holger Maninger, the brains behind Cafemoto in Gelsenkirchen, Germany, aimed to change this. 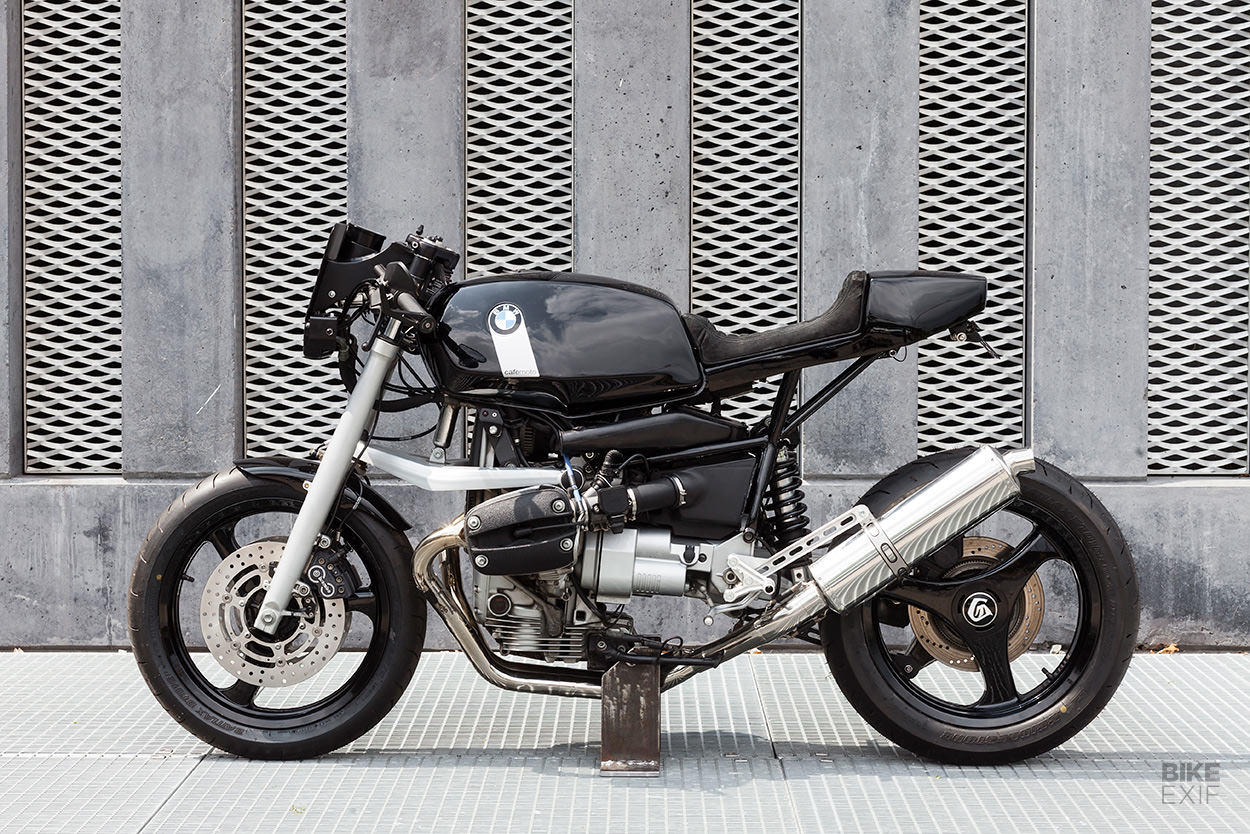 This is ‘Cafemoto 005’ and it’s Georg and Holger’s answer to the BMW R NineT. The elephant in the room is the BMW telelever front suspension, which the guys actually chose to keep. I’ve ridden a few BMW telelever bikes and they are brilliant at soaking up bumps, which is why the suspension was left alone on this build.

In fact, along with the suspension, the engine and most of the frame remain from the original bike. Cafemoto chose to focus on weight reduction, rather than power gains, so the first thing they did was ditch the stock bodywork. 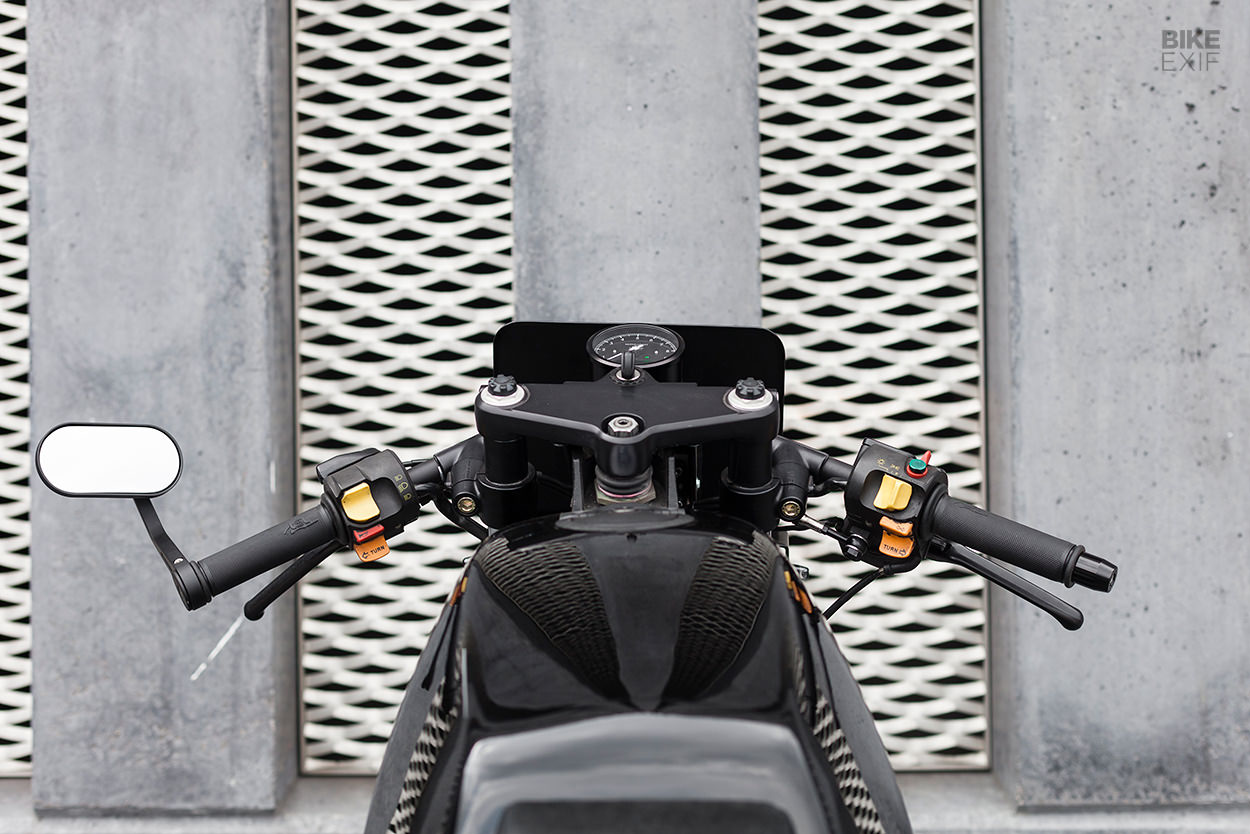 The number plate on the front forks houses a new Motogadget Chronoclassic speedometer, an LED headlight and an oil cooler. Telefix Racer clip-on handlebars were slid into place, while the turn signals are also from Motogadget.

The fuel tank is from a BMW R45 and a lot of time was spent blending it into the bike. To get the fuel pump in, the bottom was cut out and reshaped before being aligned properly with the frame. Continuing through to the tail of the bike, the rear section of the subframe was modified and a new handmade seat was fitted. 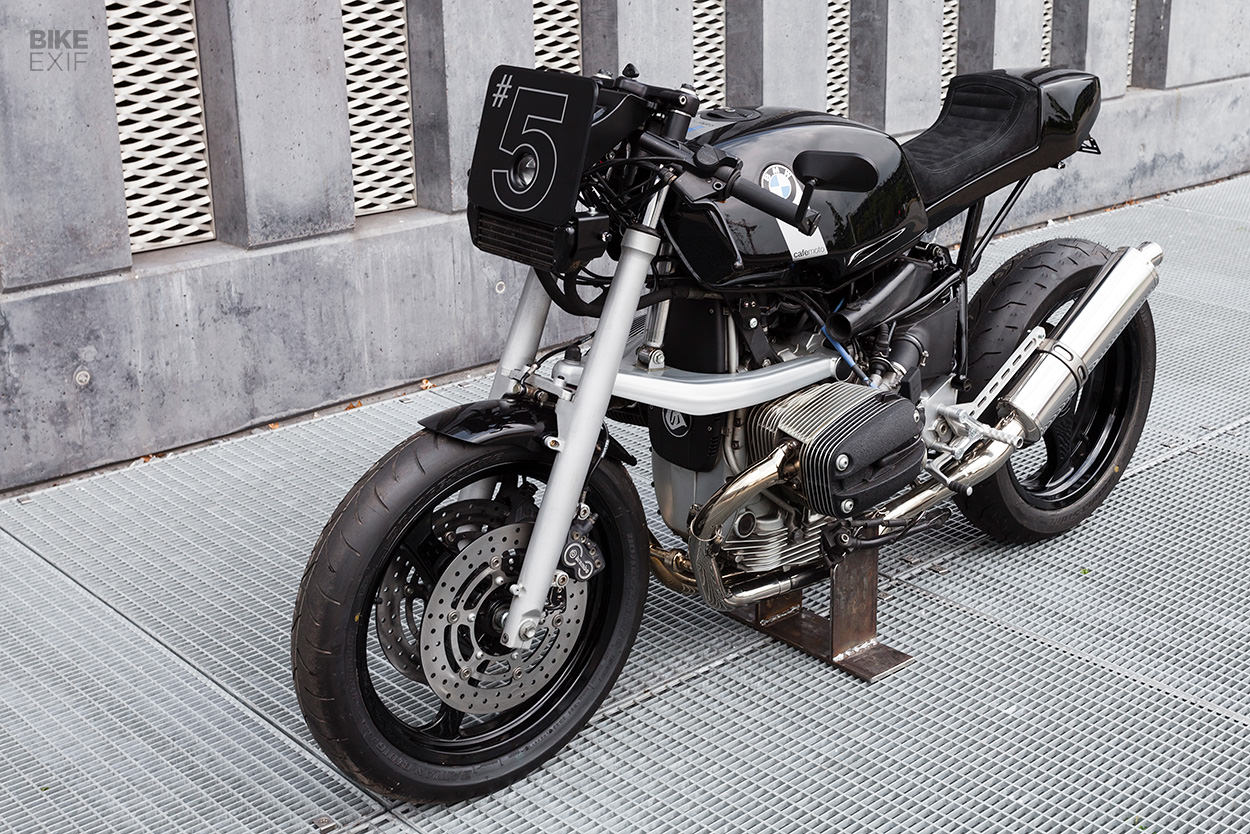 After a lick of paint (BMW ‘Avus’ black) with Cafemoto branding, new Bridgestone rubber was wrapped around the wheels. Cafemoto chose a 180-section rear tyre (up from 160) and they swapped the 17” front wheel out for an 18” unit.

The total weight saved at the end of the build? 121 lbs, bringing the weight down to 439 lbs with a full tank of fuel. 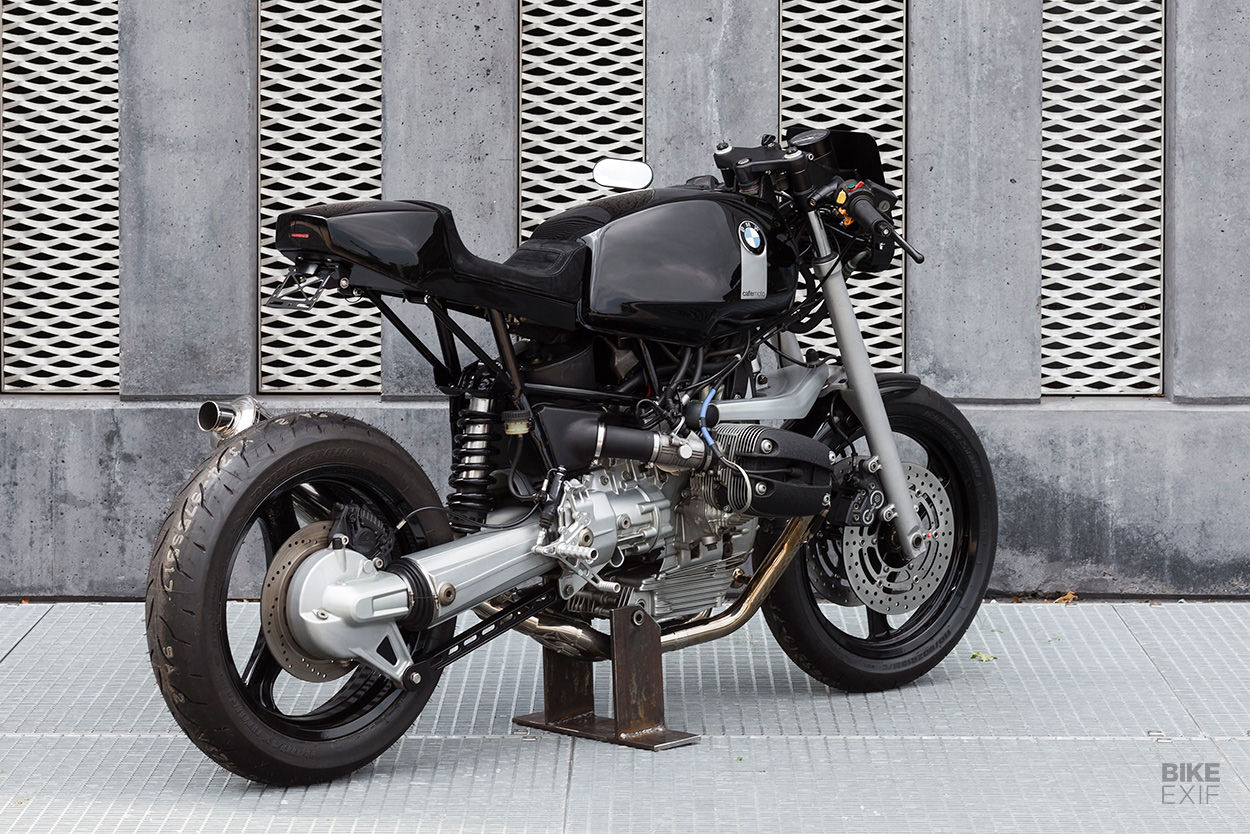 With 90 hp on tap from the 1,100 cc twin, regardless of what you think of the looks, you can’t deny this would be a hoot on a bumpy back road. [Cafemoto | Images by Michael Larssen] 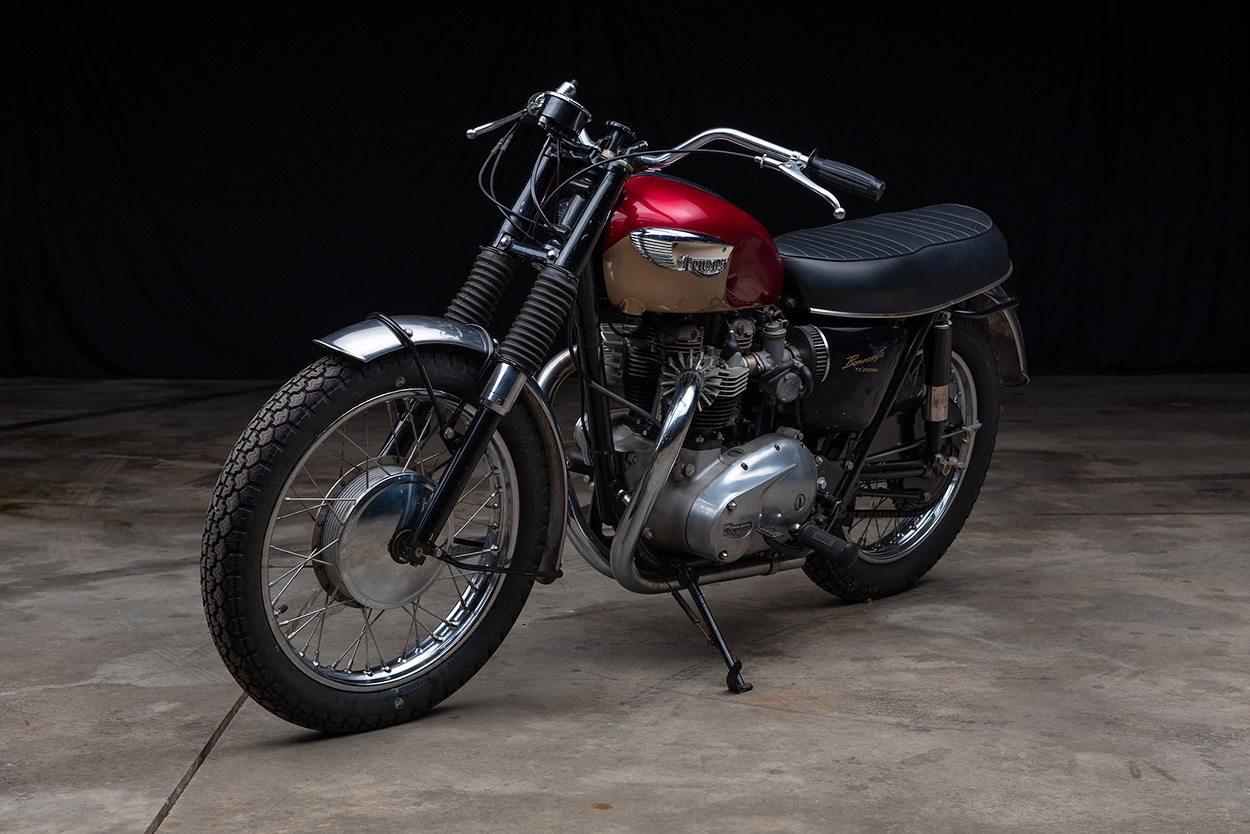 1967 Triumph Bonneville TT Special I have quite a few friends who ride British bikes—but I’m more inclined towards Italian machinery. So I tend to spread the snide remarks about English bikes on pretty thick (all in good fun, of course).

That said, it’s astounding what I would give for one of these; a 1967 Triumph Bonneville TT Special. Besides the lack of headlight, you’d be forgiven for assuming this is just an ordinary Bonneville. It’s the parts inside the engine (and the heritage), however, that make this Special special. 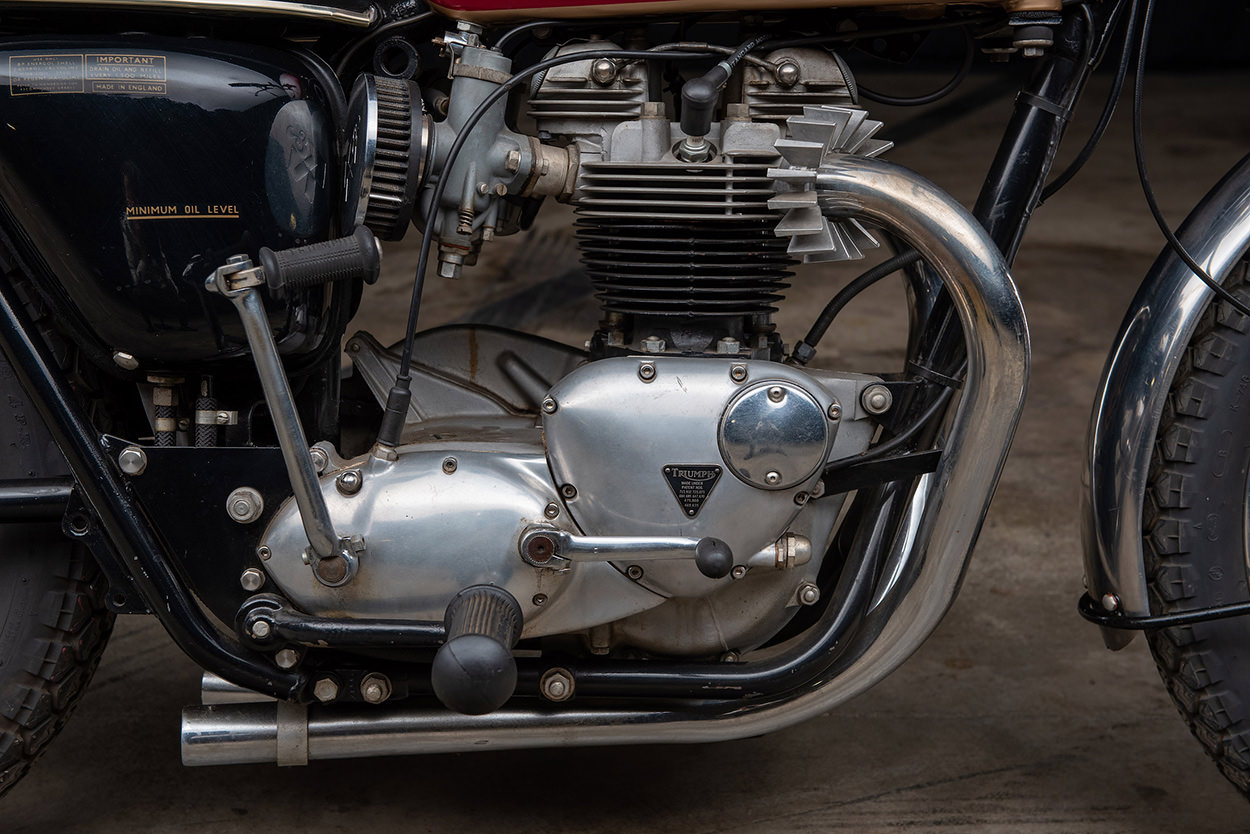 First released in 1963, the Bonneville TT Special was offered by two dealers in America and designed to compete in TT steeplechase events. A TT Steeplechase was similar to flat track Racing, but involved at least one right-hand turn and a jump. From that description, you bet these races were popular.

Hiding inside the 650 Bonneville engine cases are 12:1 high compression pistons and a 17-tooth gearbox sprocket. Up front is a single Smiths tachometer, and nothing else; no headlight or speedometer. An ET ignition, larger 1 3/16” Amal carburetors and an open, short exhaust help the engine breathe a whole lot easier. 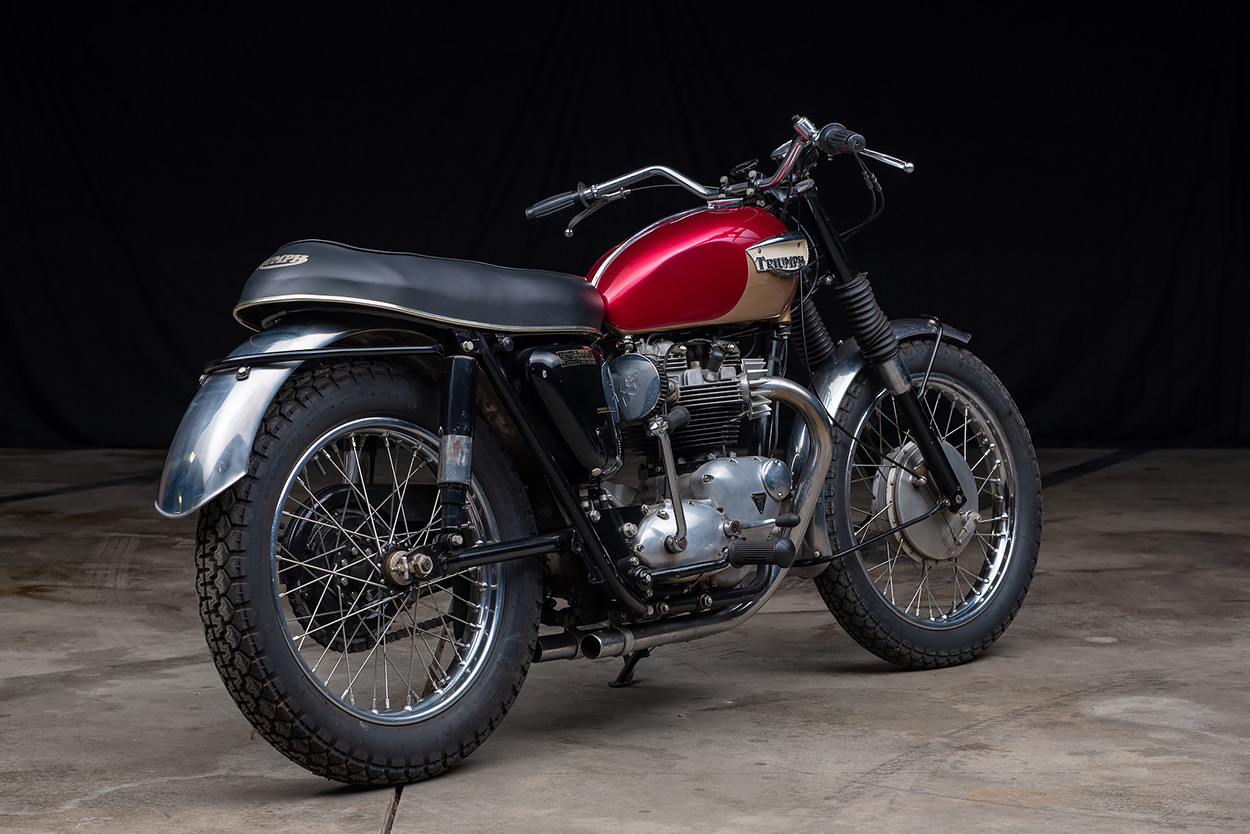 As was the case with a lot of factory specials in those days, not all bikes were produced to the same spec. Some had 11:1 compression ratios and 19T gearbox sprockets, and I’m sure Triumph-cognoscenti will be able to spot other minor differences.

Because the TT Specials were built to be raced, there aren’t a lot of surviving examples. Only produced for five years, the rarity and race heritage should mean they would do well at auction. 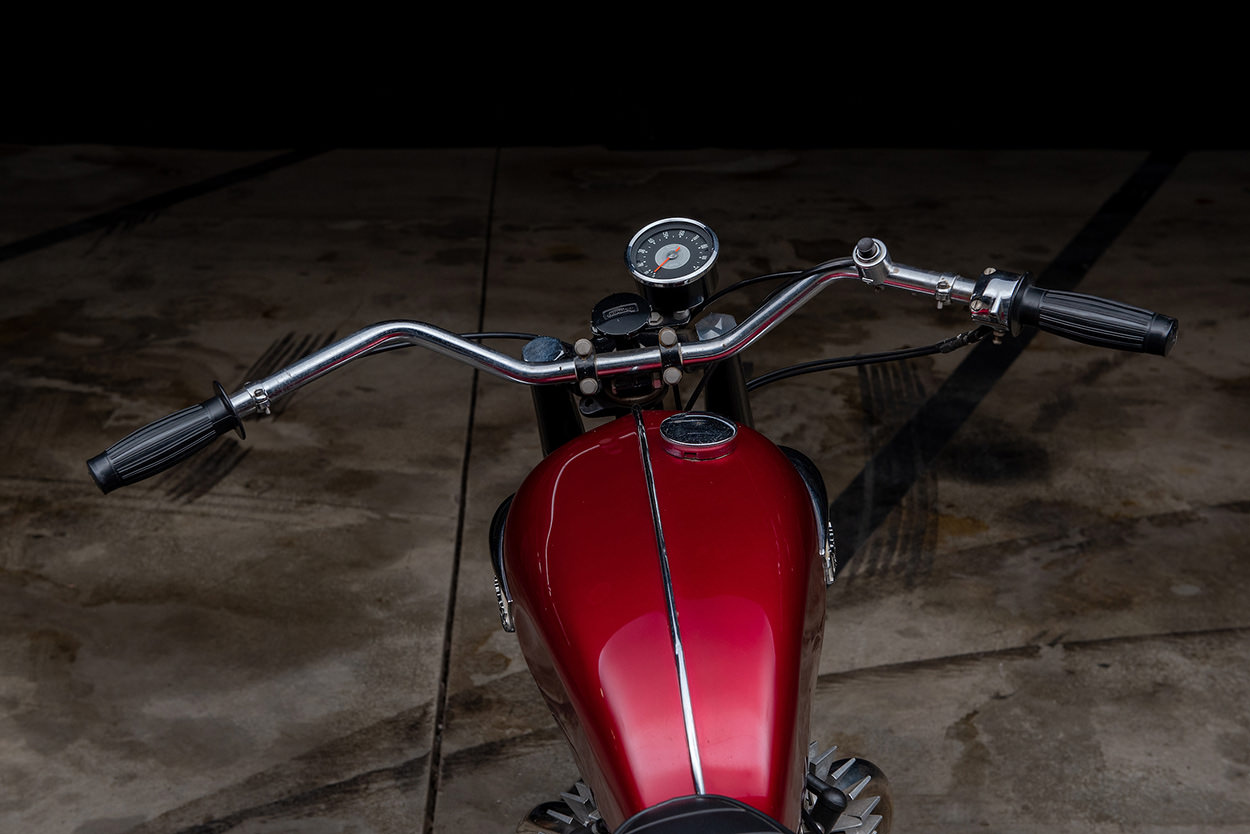 This particular, well kept, matching numbers example just sold at RM Sotheby’s for $7,200—which is lower than the $10-12,000 that it was expected to fetch.

Price aside, the two-tone paint, exhaust and desert sled vibes really do it for me. It’s not quite enough to draw me away from European exotica, but it comes close. [Via] 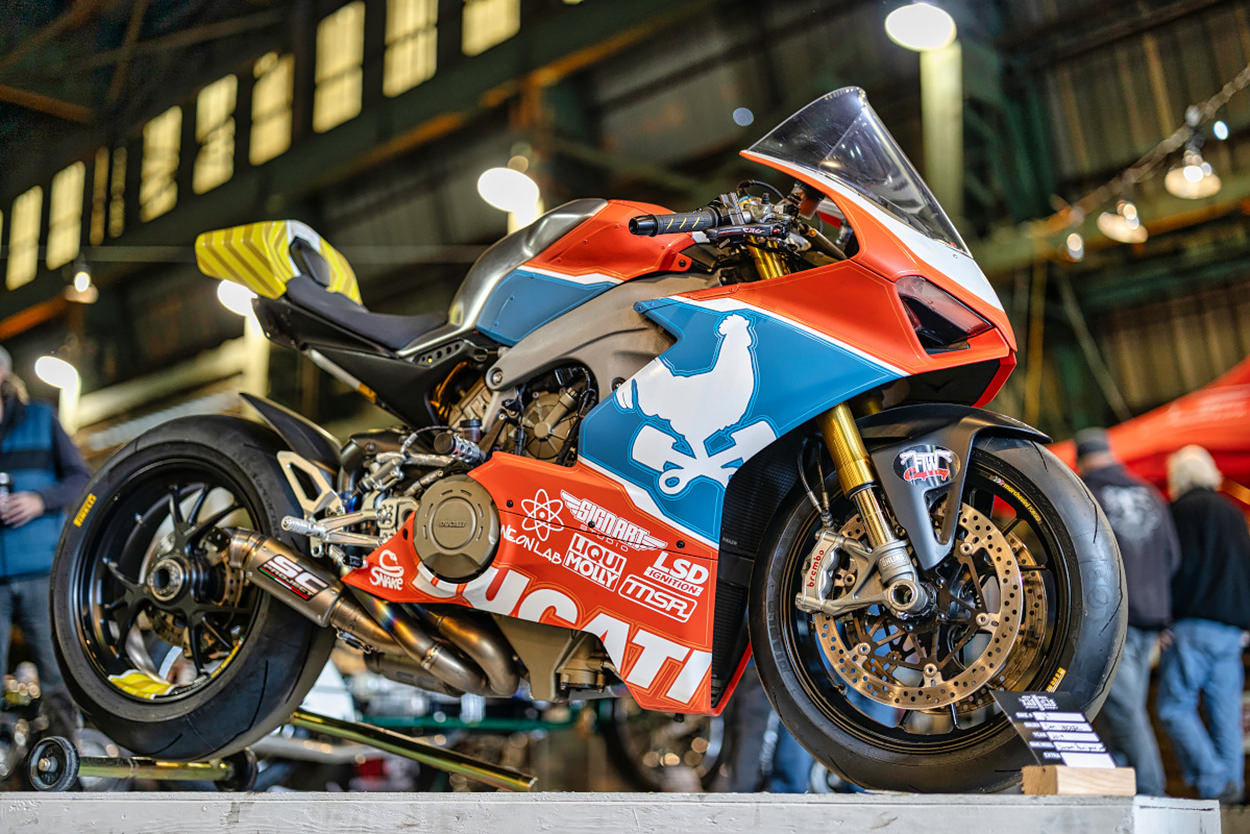 Dan is a sign maker and painter by trade, and yes, he painted the bike himself. What you might not realize is that Dan also built the aluminum tail section and other bodywork for the bike by hand. 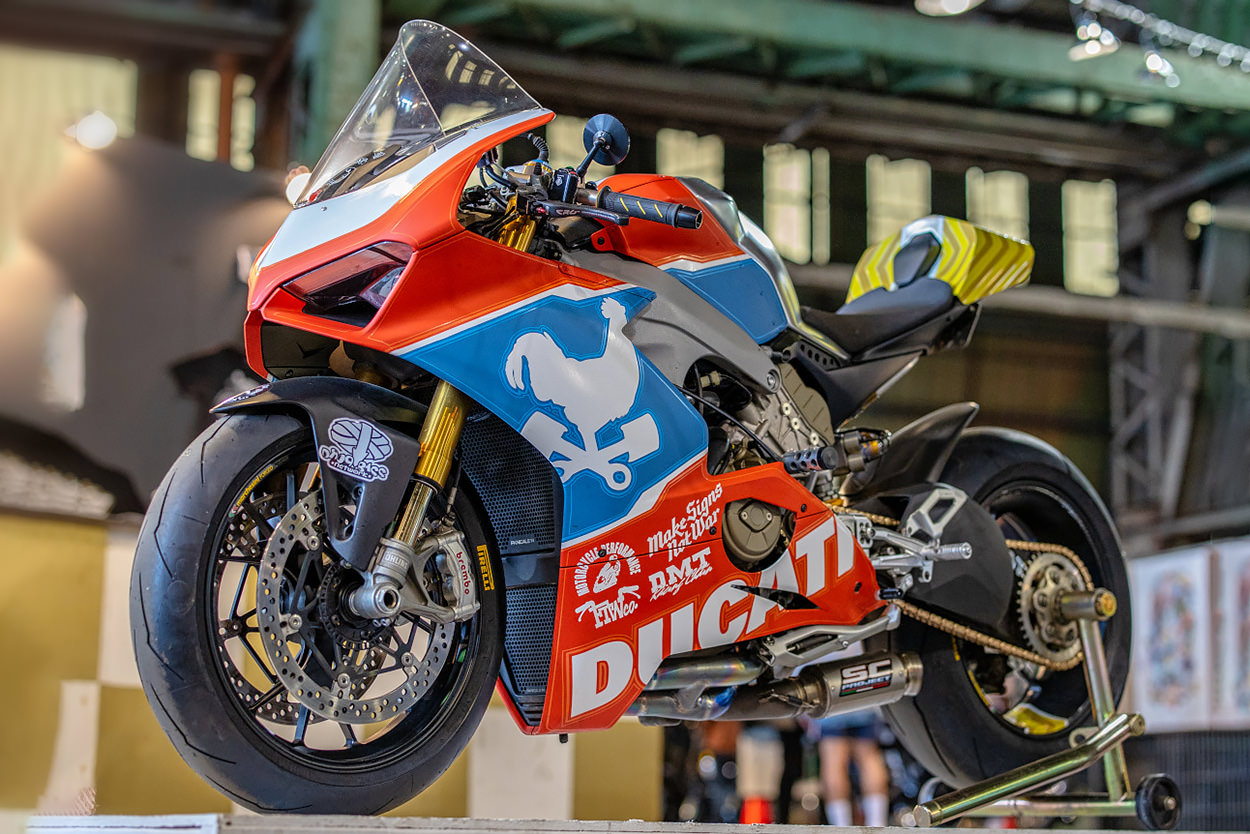 Dan’s company, Make Signs Not War, specializes in hand-built signage so he wanted the bike to show off his aluminum fabrication and painting prowess. All the paint was laid down using matte clears and the graphics were all hand-painted by Dan with gloss enamel. The pin striping around the headlights is particularly delicious. 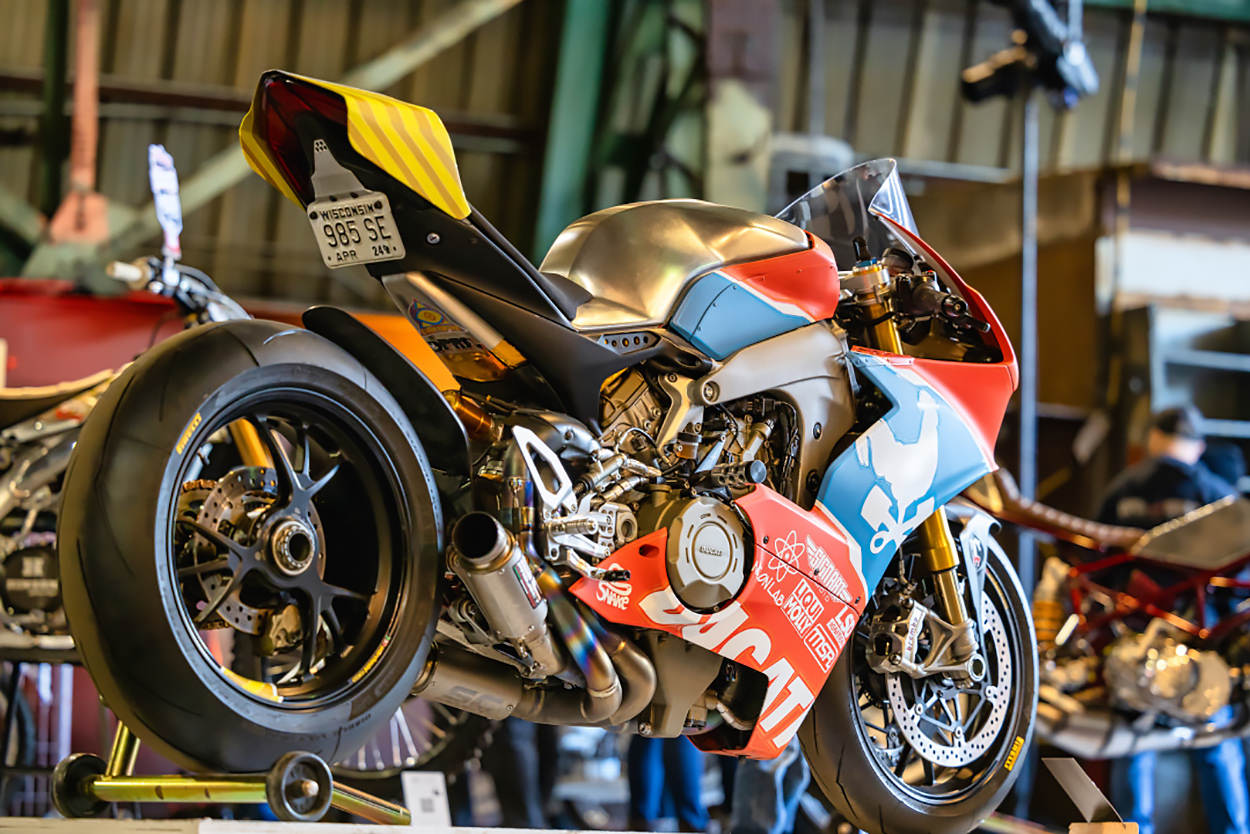 From the factory, the V4S front fairing blends into the fuel tank. Dan wasn’t a big fan of this design so he chose to cut up this expensive Italian motorcycle. In my opinion, he’s pulled it off beautifully and has somehow made a sporty bike even more sporty.

The lower part of the fairing was trimmed back to expose more of the engine, and the exhaust shield had a haircut as well. The ends of the Termingnoni exhaust were extended so Dan could use SC Project slip-on mufflers, and the mirror mounts were blocked off with aluminum plates. 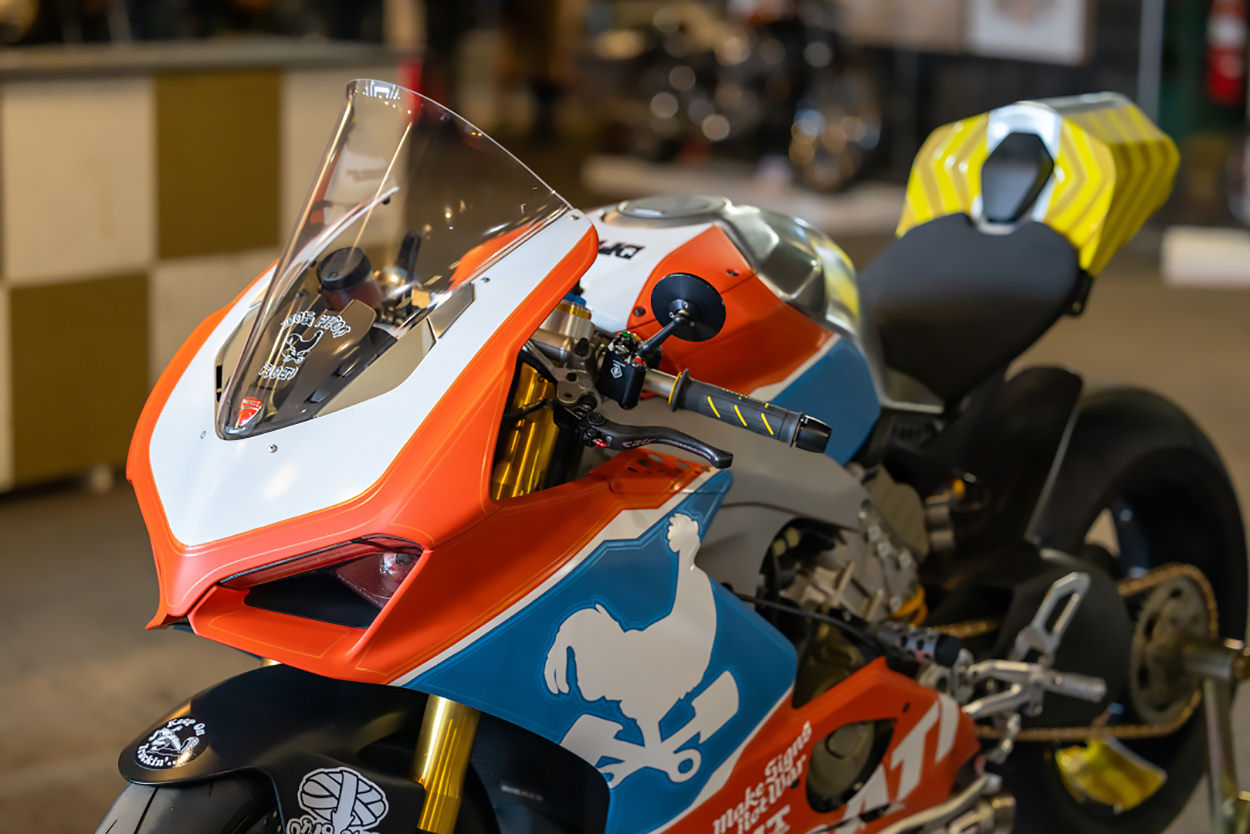 “I didn’t have a certain influence or concept other than giving the refined Italian bike a little more grit,” says Dan. “I always remember Roland Sands saying something along the lines of ‘make it punk rock.’”

This bike ticks all my boxes—it’s Italian, has outlandish graphics, a good back story and, to top it all off, it gets ridden as much as possible. [Via] 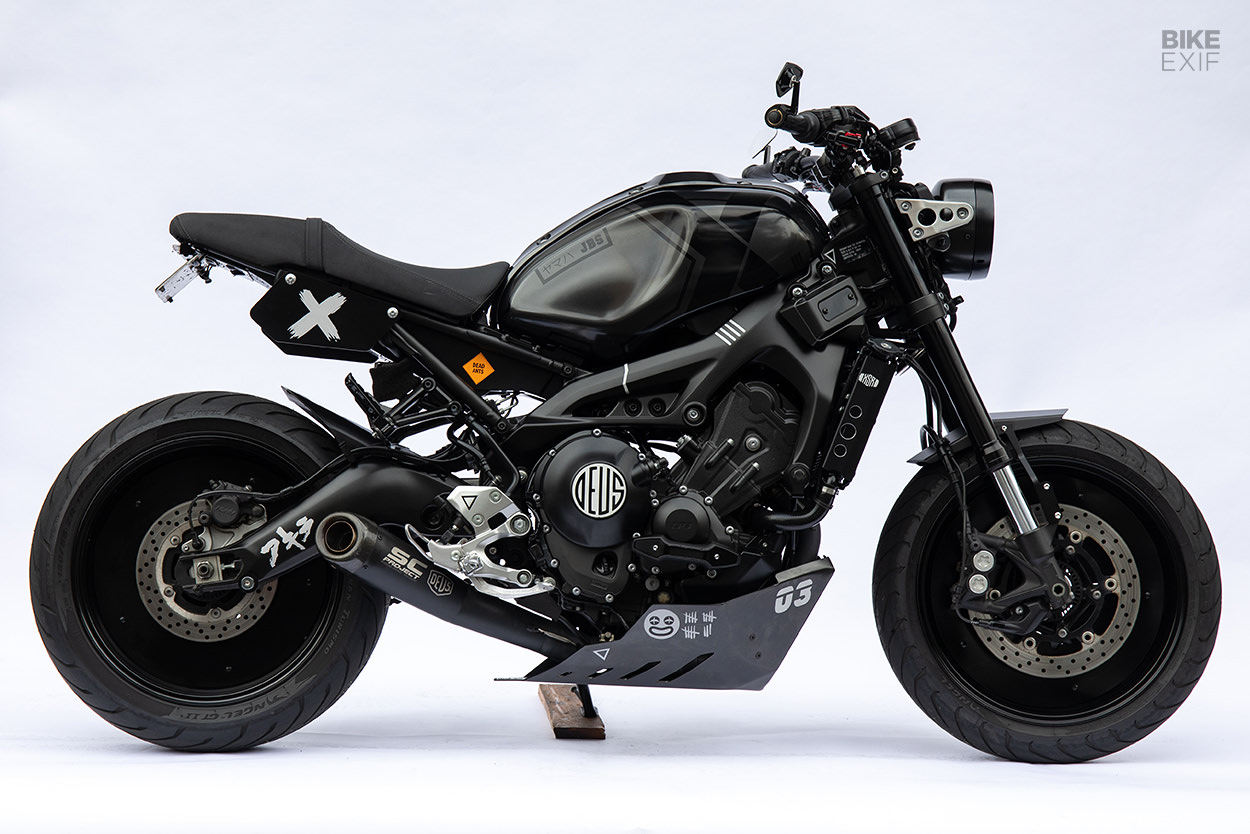 Yamaha XSR900 by Deus ex Machina Seven years since its initial worldwide release, the Yamaha XSR900 is a popular choice for custom bike builders. With modern suspension, good brakes and gobs of power from the 847cc inline triple, it’s easy to see why. This particular XSR is the latest creation from Jeremy Tagand of Deus ex Machina Australia. 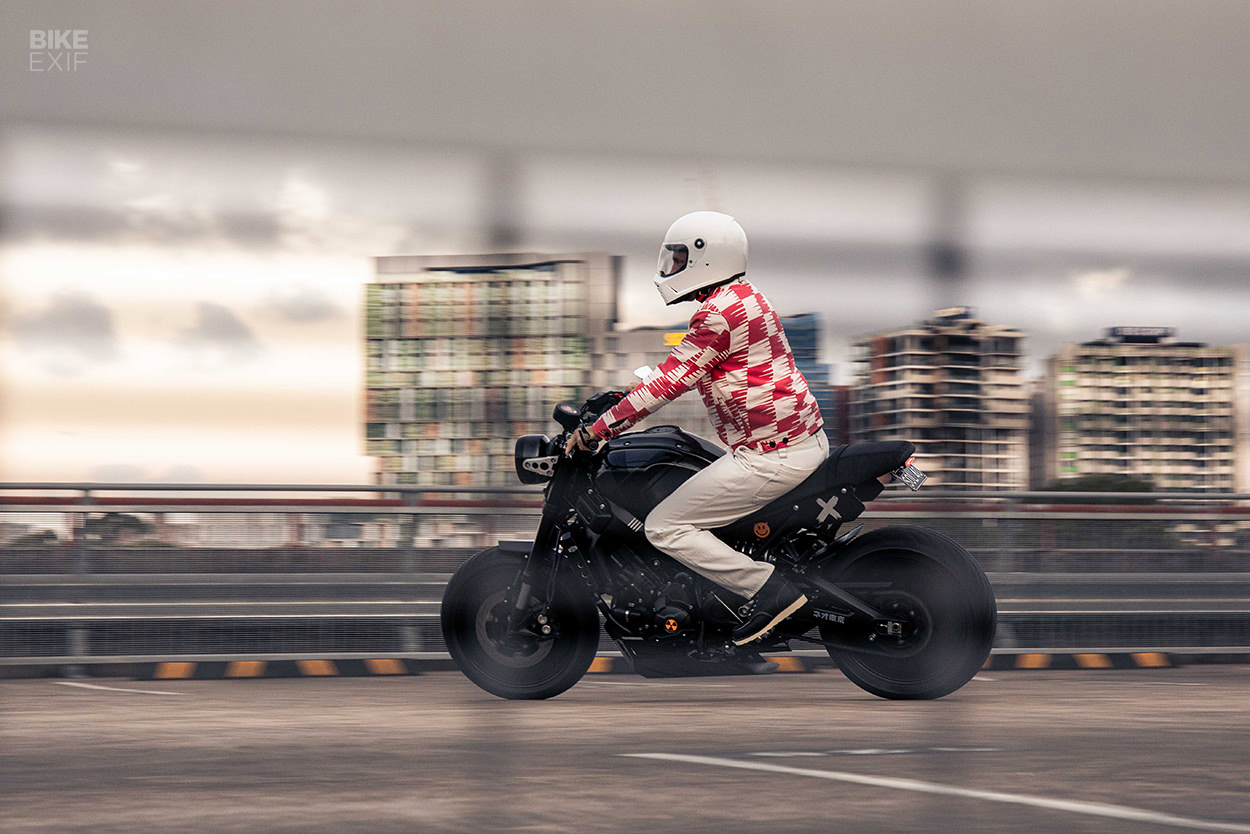 Built for a friend of Jeremy’s, this XSR900 has styling cues that may look familiar to fans of the 1988 cult classic film, Akira. Set in neo-dystopian Tokyo, Akira follows the story of Shōtarō Kaneda and Tetsuo Shima, best friends and leaders of the vigilante Bōsōzoku motorcycle gang, the Capsules.

Jeremy didn’t set out to replicate Kaneda’s iconic red bike, but rather to carry the film’s neo-Tokyo vibe over to the modern Yamaha. The dark, moody paint job with ghosted graphics by Marc Houssenloge at Sydney Custom Painting, drives that point home. 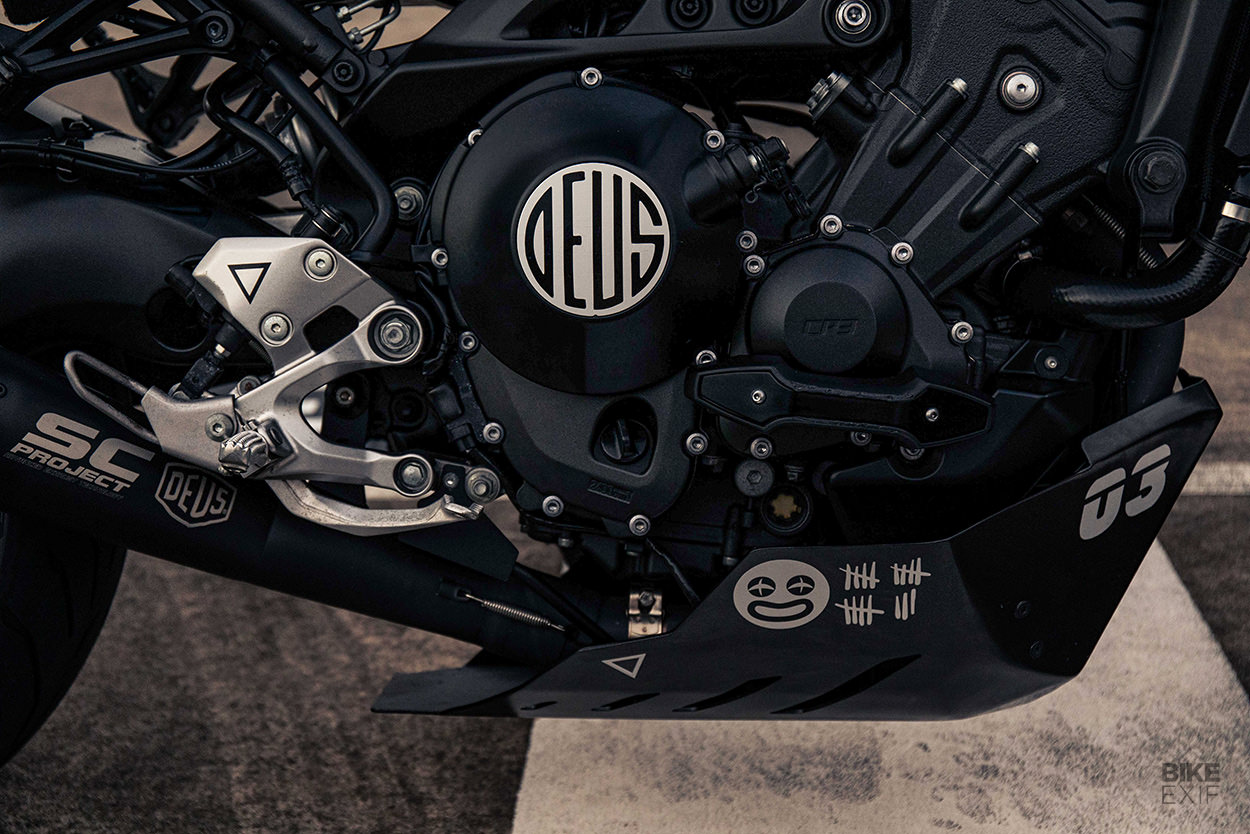 It’s hard not to notice the custom-built solid wheels that adorn the bike. These were created especially for Jeremy at Deus by Mario at Ricci Engineering and set the aggressive tone of the build perfectly. Adding to the theme is a Yamaha Tracer 900 skid plate from Givi, which was extensively modified to fit over a new SC-Project exhaust. 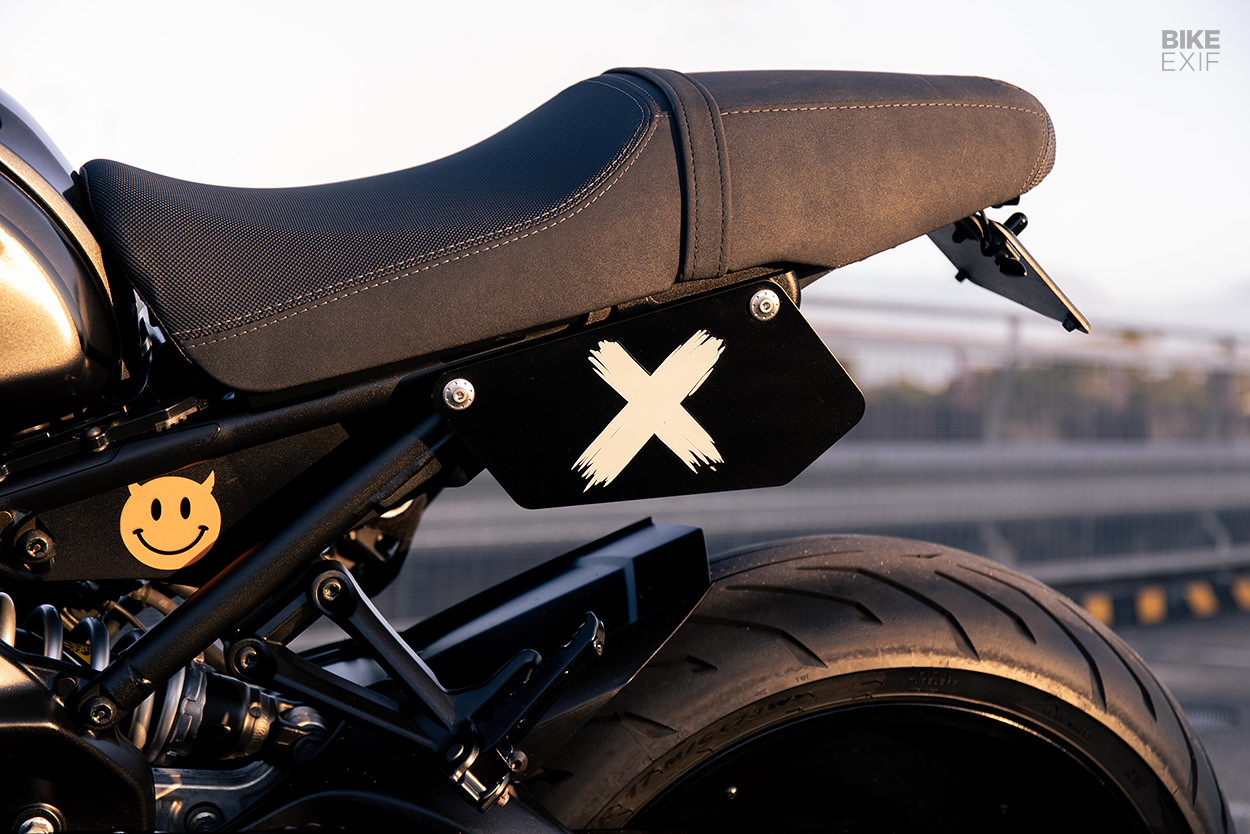 The front fender, rear-wheel hugger, chain guard and speedometer relocation brackets are all ‘Monkeebeast’ parts from Kedo, designed by The Wrenchmonkees. Lighting duties front to back are shared by S2 Concept, Motogadget and Kellerman parts. Rounding out the more subtle details of the bike are tapered bars from Rizoma, in black, naturally.

I’ve never been overly enamored by the XSR900 in stock form. However, when people like Jeremy and the Deus team get their hands on them, I sit up and take notice. [Deus ex Machina Australia] 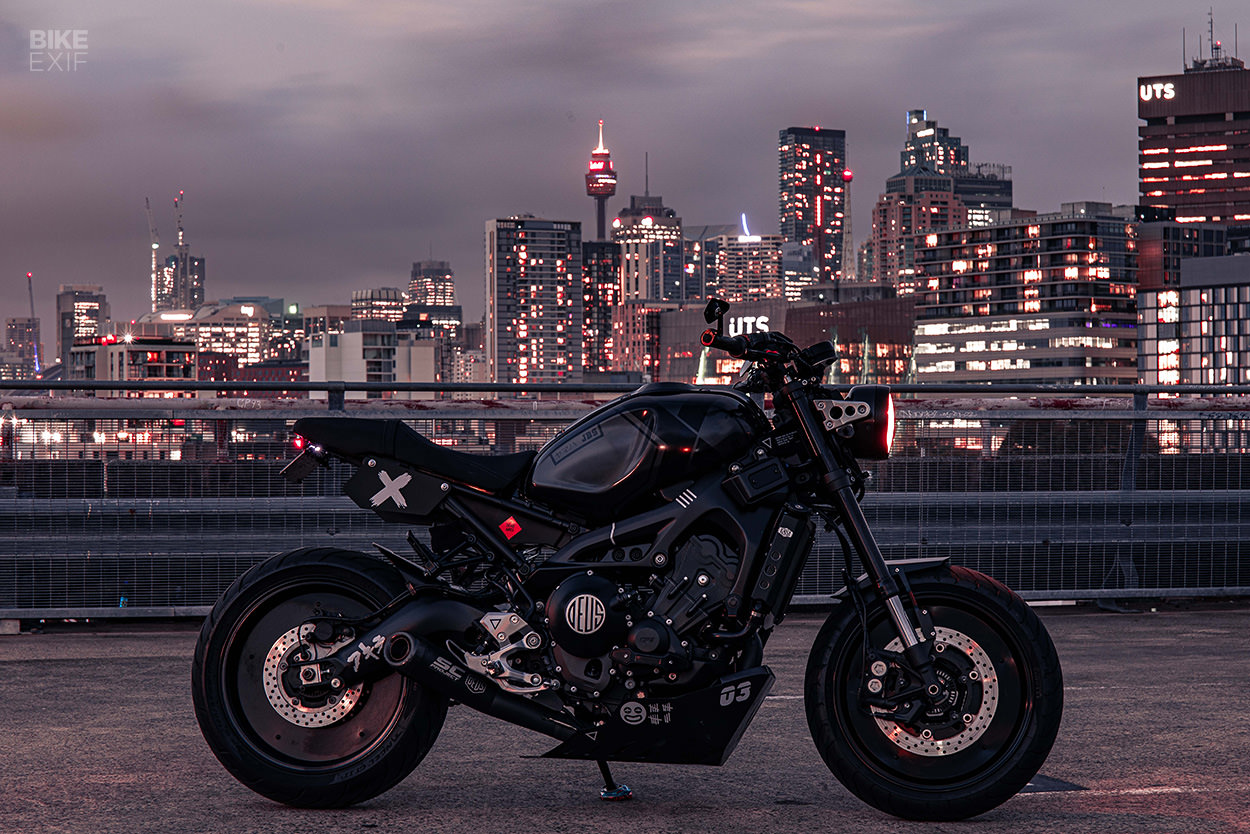