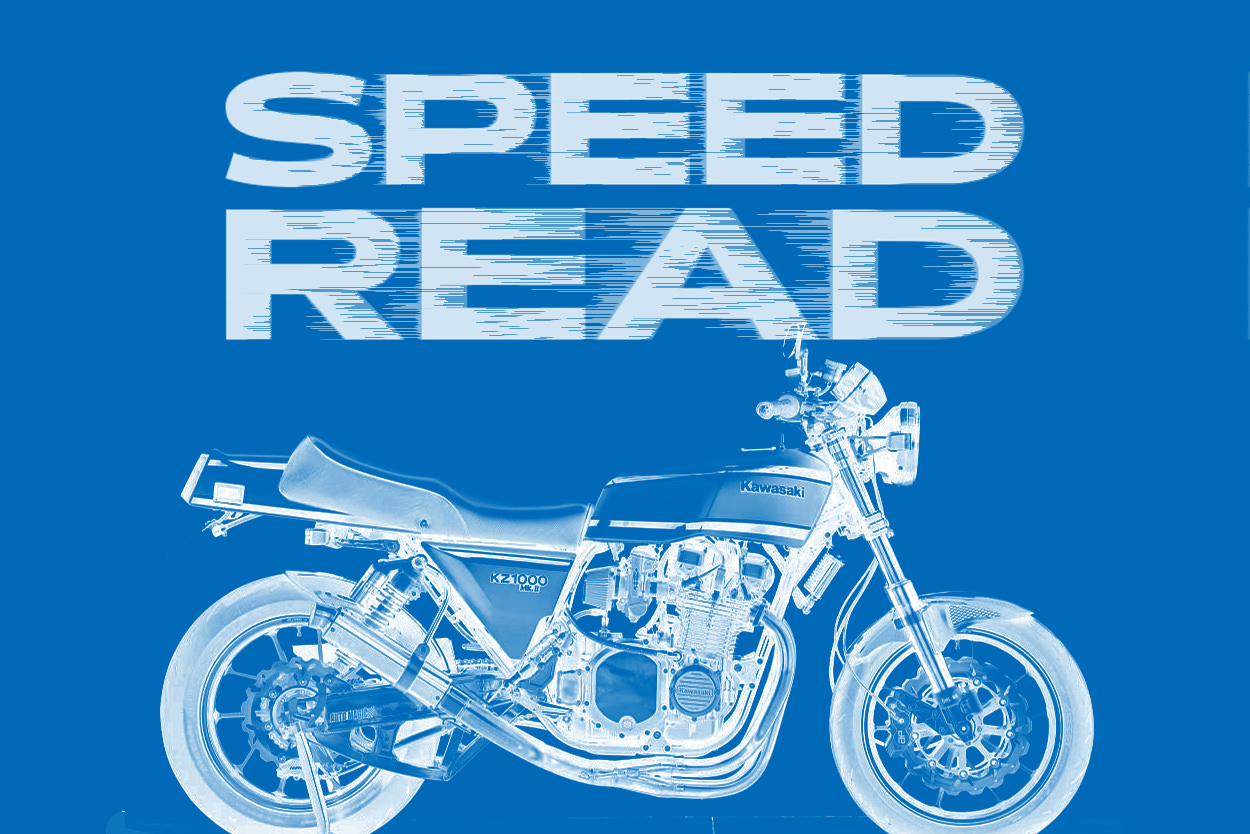 Our favorite stories this week run the whole gamut from old school to new, starting with a stunning Ducati breathed on by the legendary Woods Motor Shop. There’s also a crisp CB750 from Australia’s JAX Garage, a gorgeous Kawasaki restomod from the Japanese specialists Auto-Magic, and news of the return of Can-Am. Enjoy. 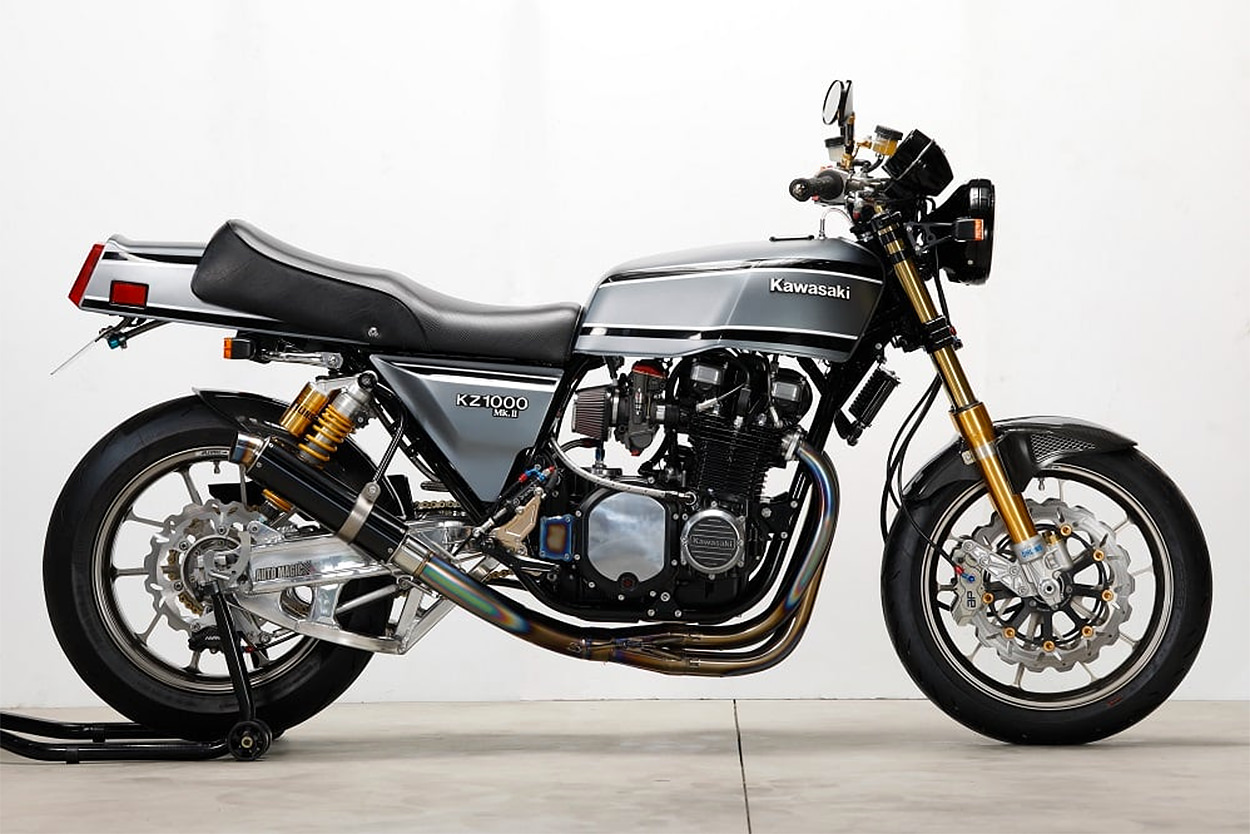 Kawasaki KZ1000 MkII by Auto-Magic When it comes to meticulous muscle bike restorations in Japan, AC Sanctuary has the highest profile. But they’re not the only outfit playing this game. An hour’s drive south through the Chiba prefecture will take you to the front door of Kawasaki specialist Auto-Magic, which has a slightly different approach but an excellent reputation. 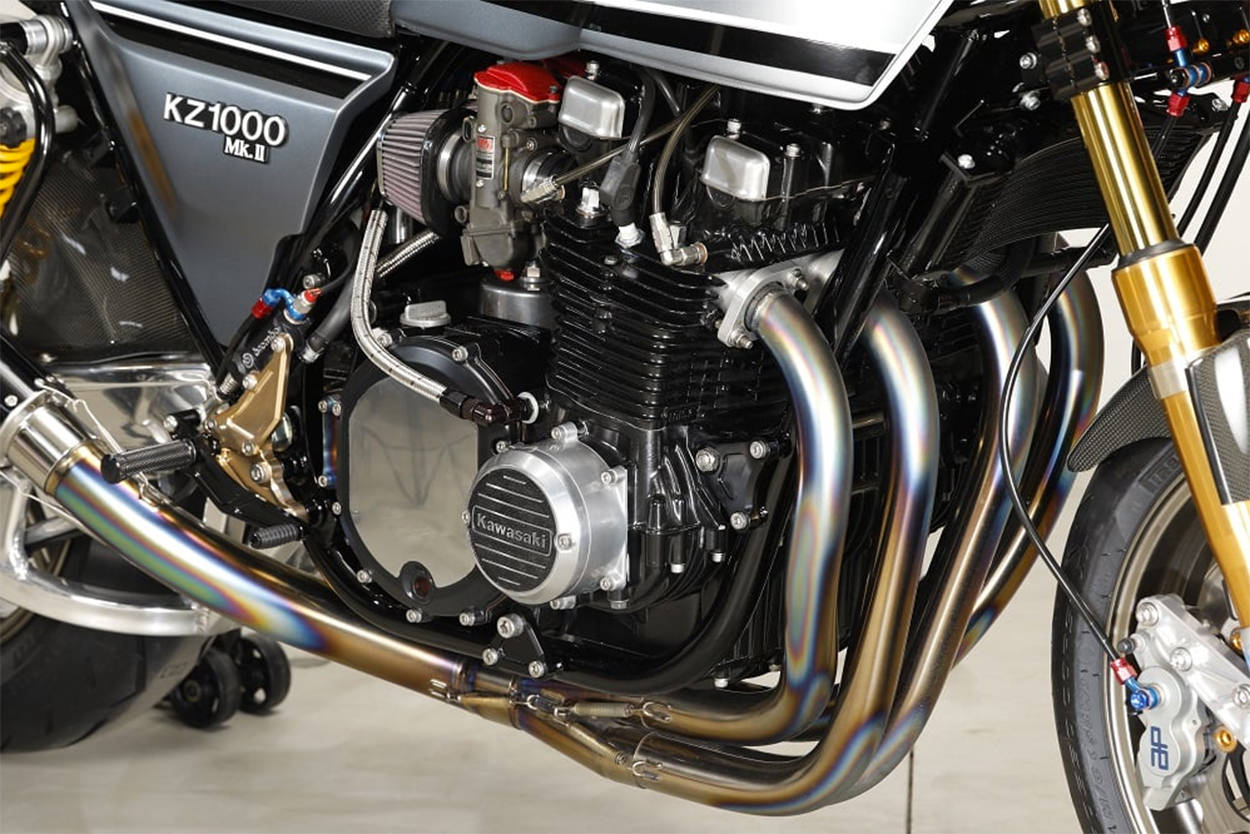 Auto-Magic focus more on the restoration side, with a smattering of mods to bring bikes up to date—rather than building ultra high-end restomods.

This newly-finished KZ1000 is a great example, and looks as good as the day it rolled off the factory floor. But closer inspection reveals a few interesting changes to the structure of the bike. 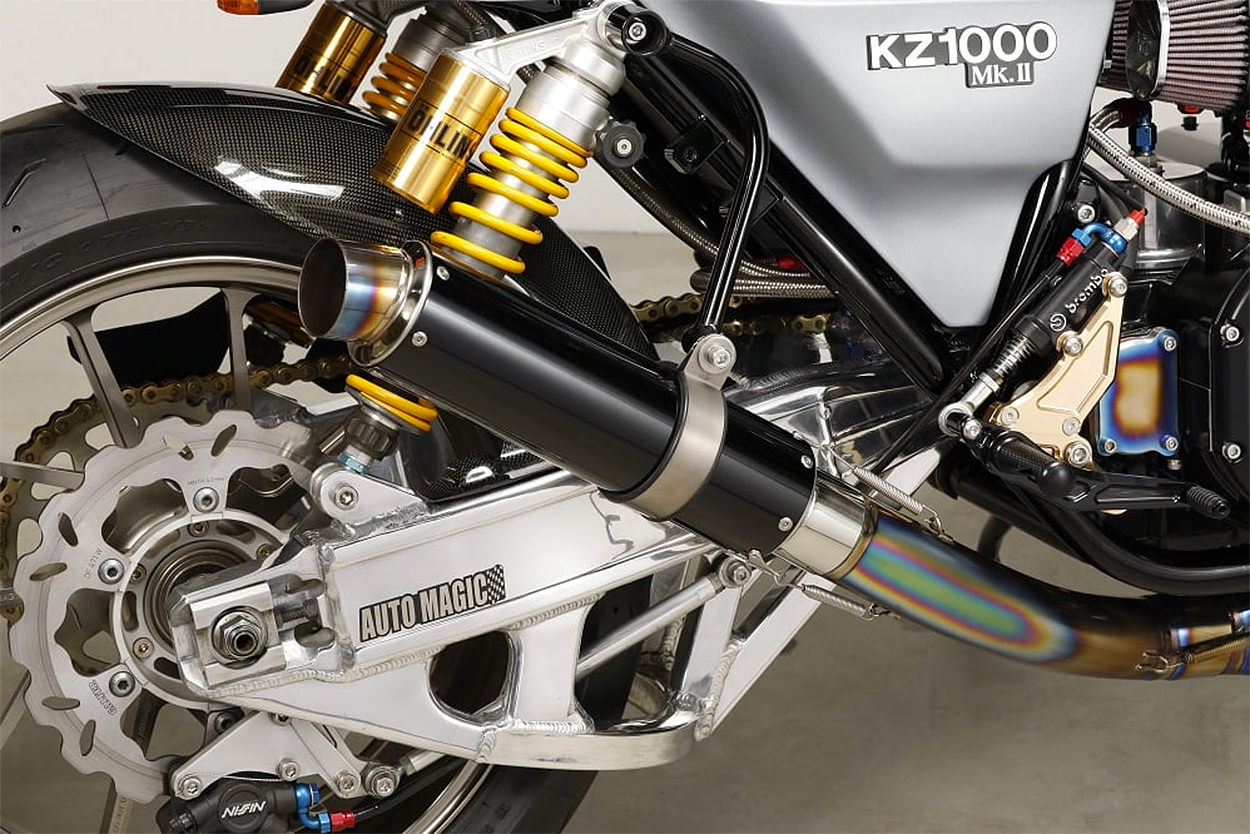 The biggest change is at the frame level, with stiffer sections of seamless steel tubing welded underneath the top tubes, which have been reinforced. There’s a matching new rear subframe too, and everything has been realigned on a jig.

There’s more major work on the swingarm, which is an adapted Yamaha XJR1300 unit with rebuilt pivots. It also allows Auto-Magic to fit a 200-section rear tire. (The rear wheel, incidentally, was found to be slightly out of alignment, and corrected.) 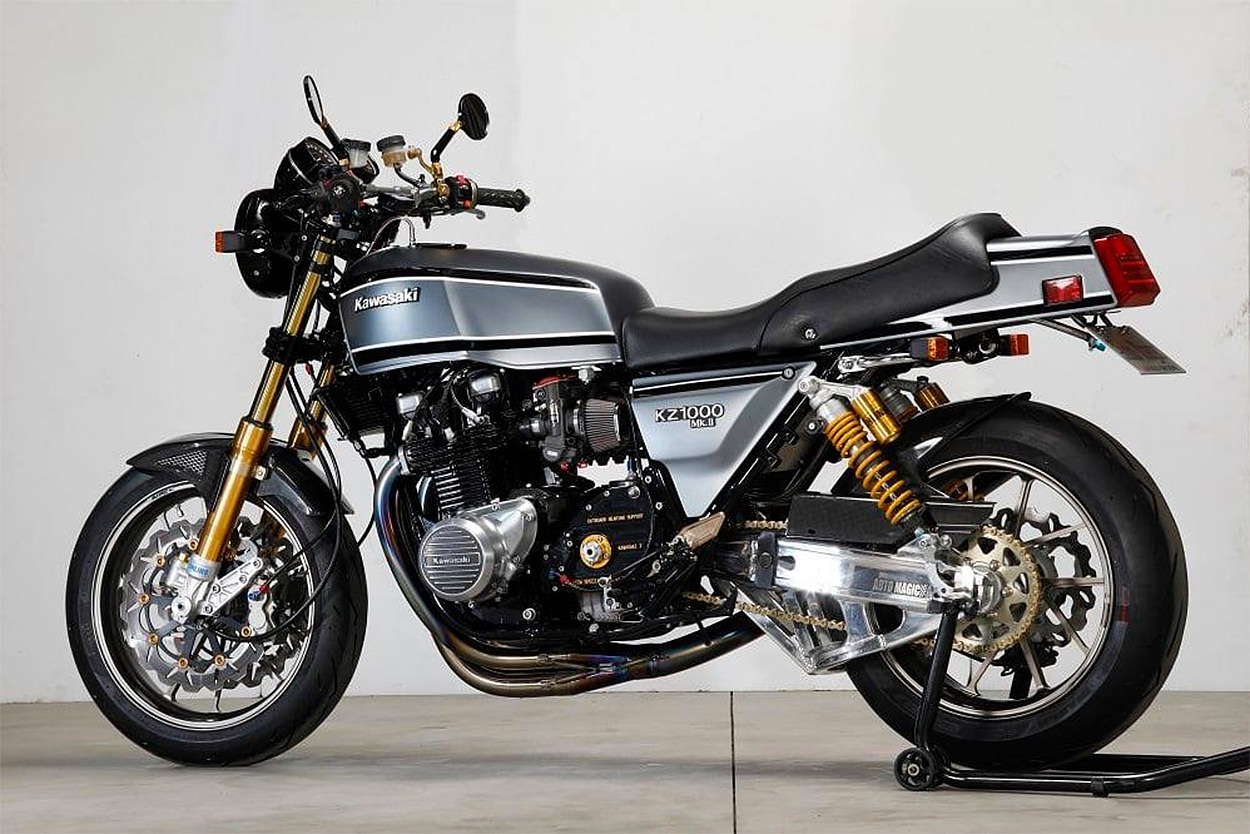 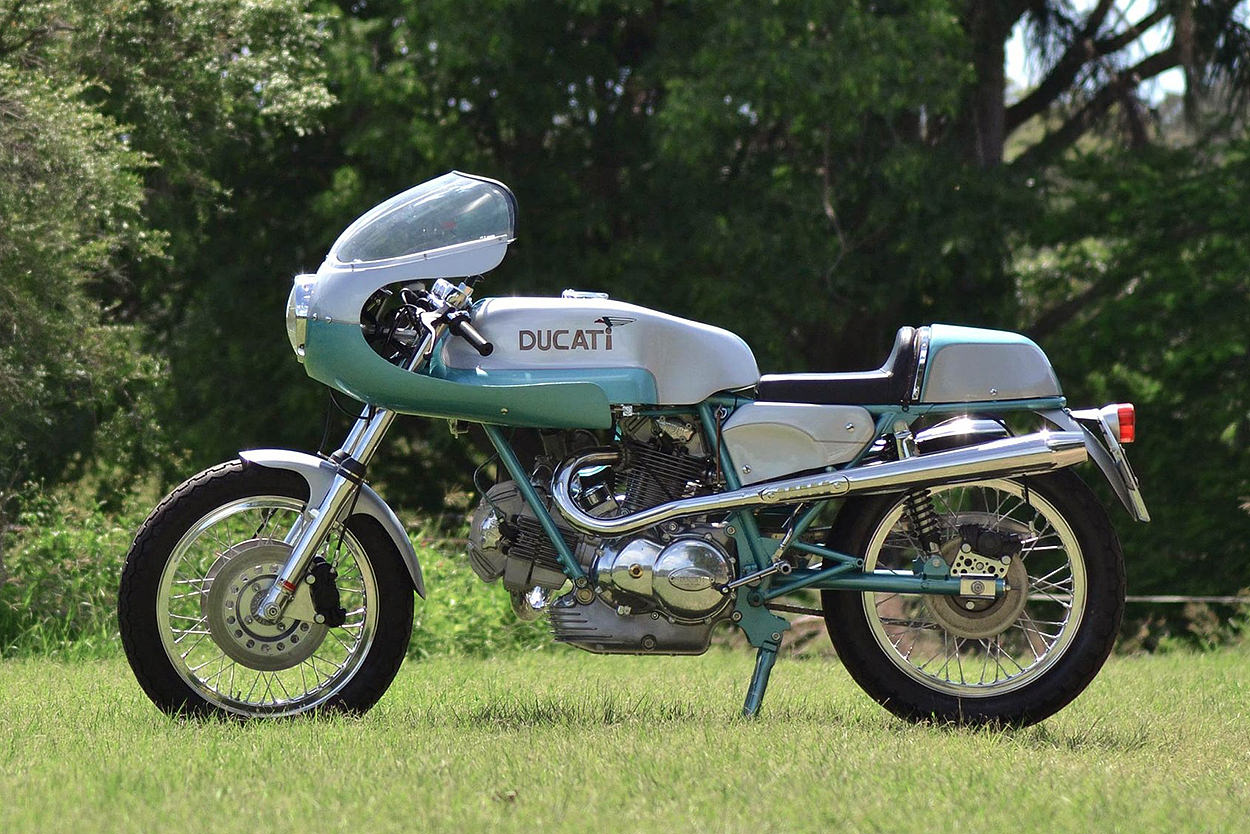 The “Woods Bike” We tend to associate Brooklyn-based Moto Borgotaro with classy Italian restomods, but main man Peter Boggia also has a knack for tracking down some very interesting machinery to sell.

He’s just listed this 1974 Ducati 750SS, which is even more desirable than usual—because it was tweaked in the mid-80s by Jim Woods, proprietor of the famous SoCal hot rod outfit Woods Motor Shop. 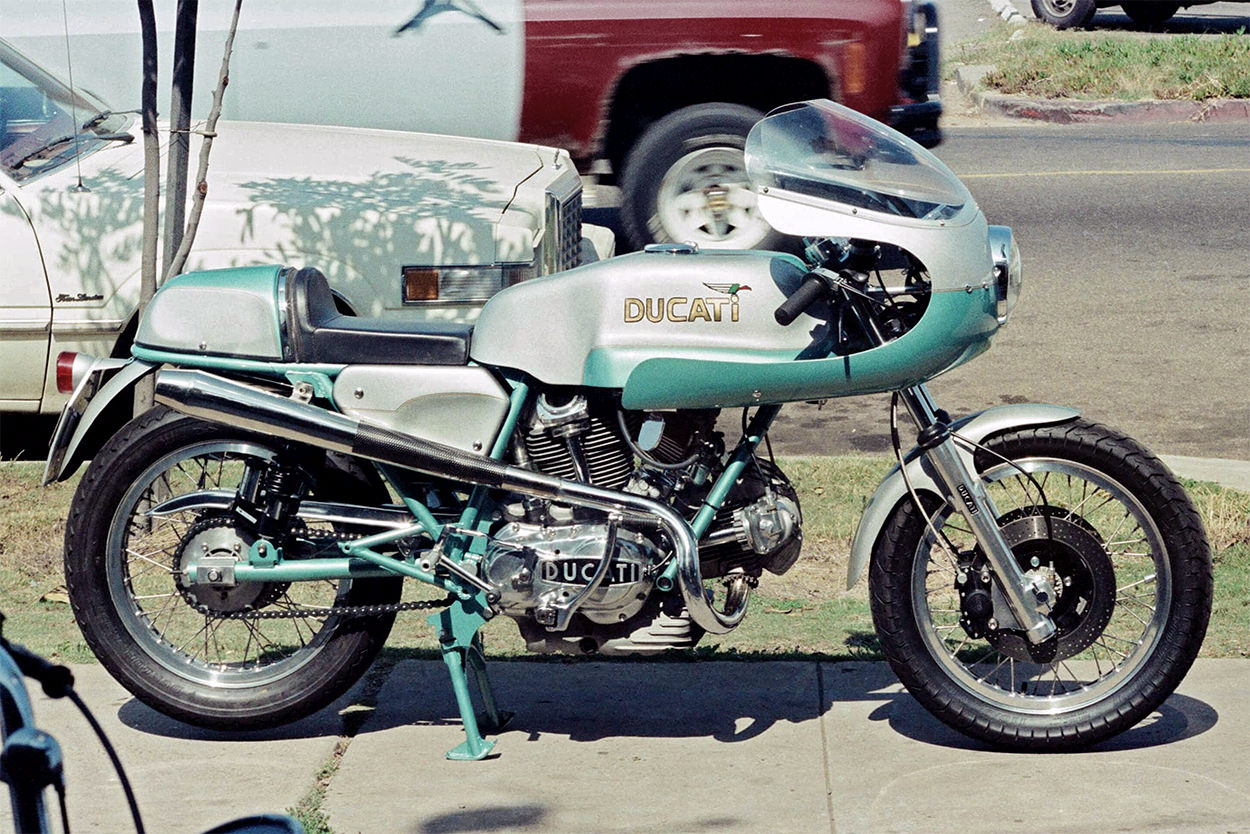 In 2013, a no-expenses spared restoration began, including an engine rebuild by Ian Gowanloch in Australia. The original, non-Woods bodywork was restored by Back To Classics in the Netherlands, and every detail on the bike has been carefully considered—right down to the Alpina spokes on the beautiful Borrani rims. 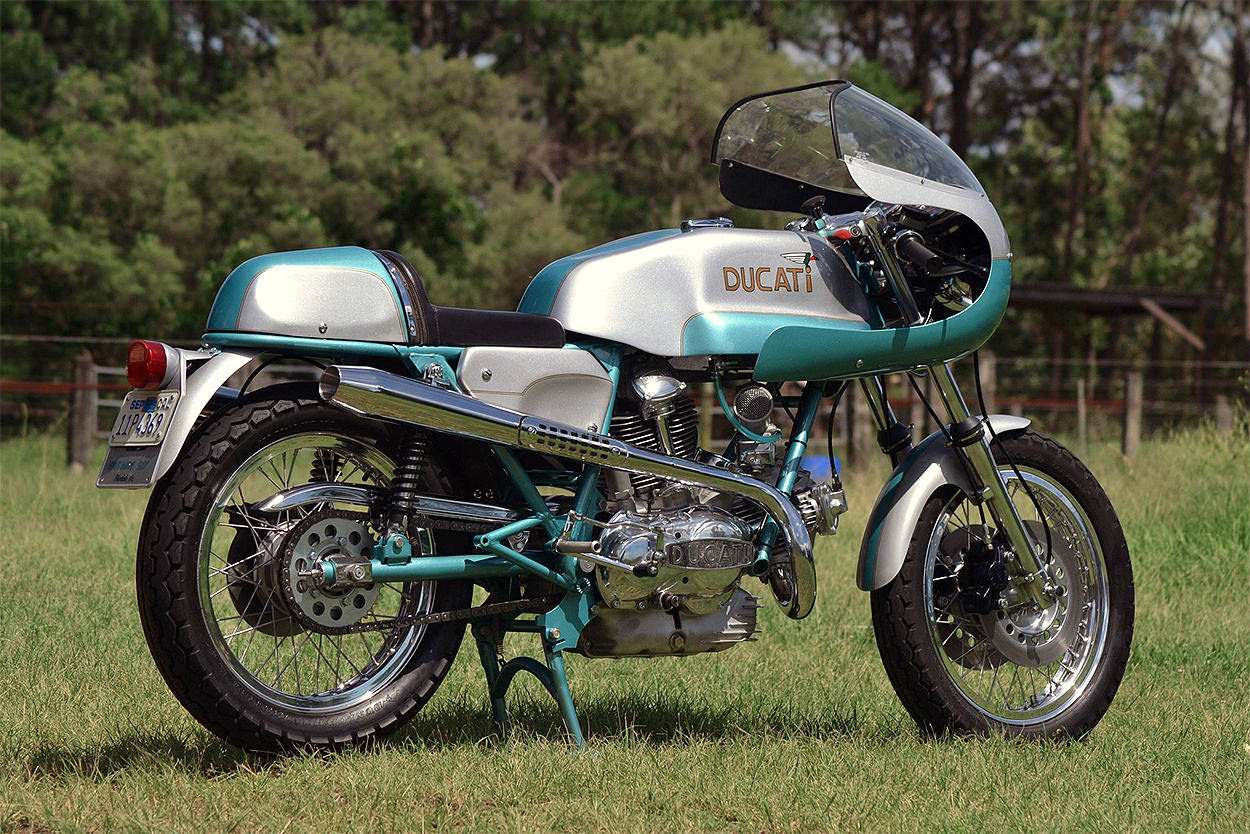 “To say that the current owner is detail-oriented would be a gross understatement,” says Peter. “Included with the sale is a huge history file of the restoration process, original receipts, as well as hundreds of photos and notes over the nine-year restoration.”

In terms of provenance, this is as good as it gets. Well-heeled Ducatisti should contact Moto Borgotaro for more details and pricing. 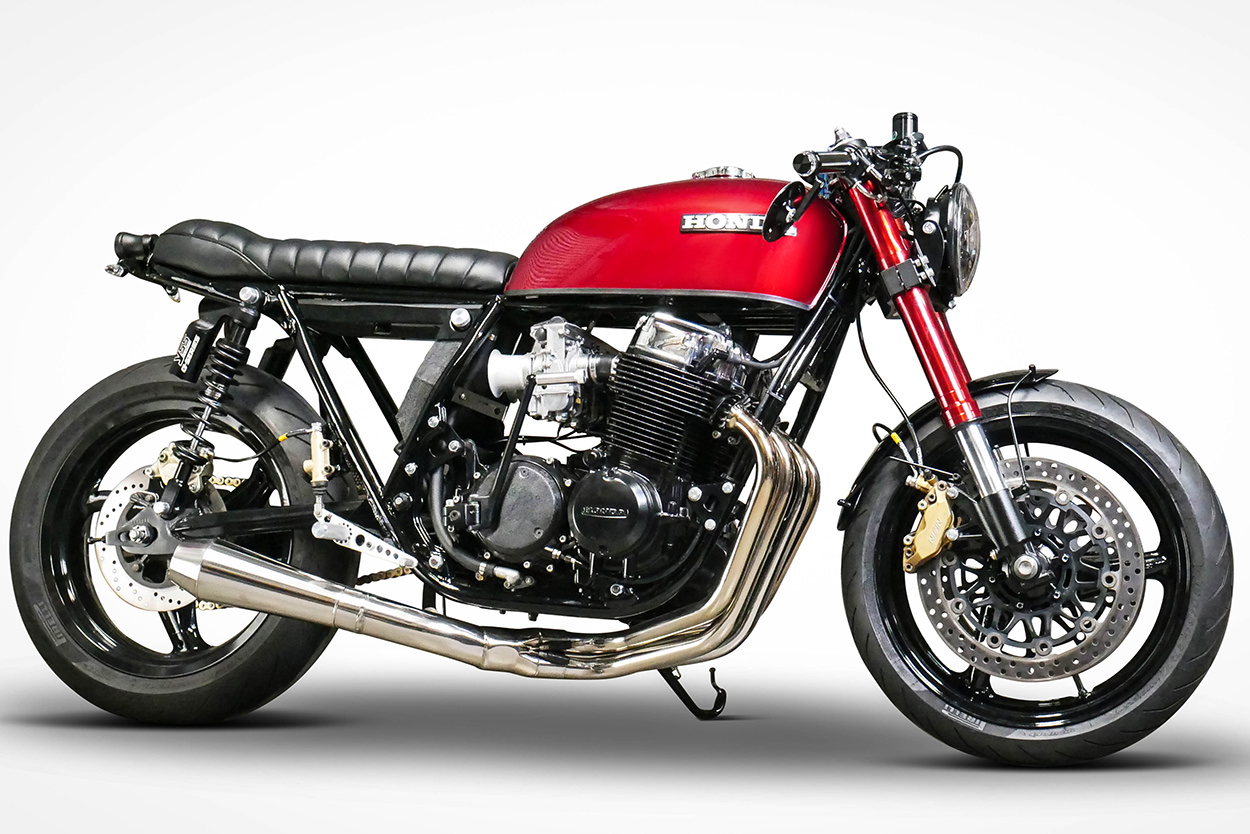 Honda CB750 by JAX Garage It’s hard to believe that the iconic CB750 was released over half a century ago. It still looks terrific in stock form, and still exerts a pull on custom builders. This red-hot CB is exactly 50 years old, and comes from JAX Garage of Melbourne, Australia. 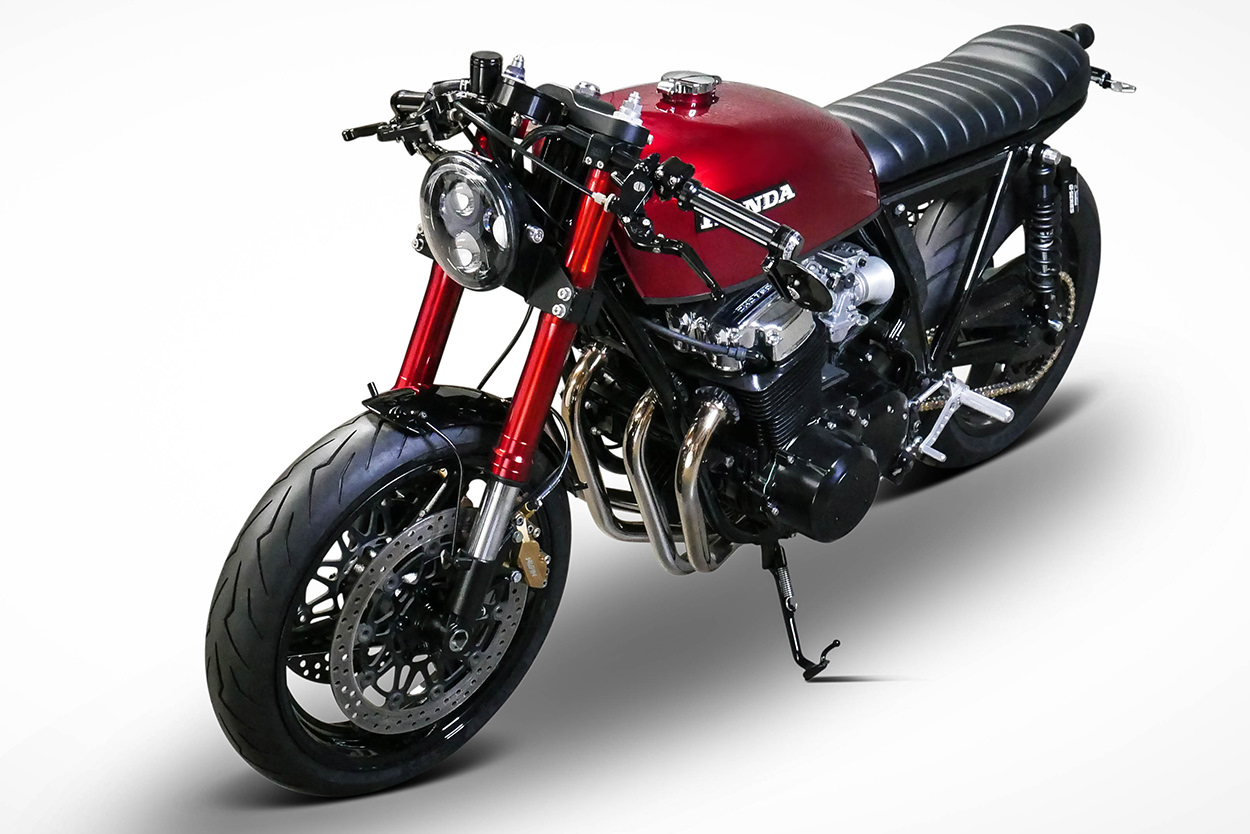 A lot of work has gone into this machine. The front end is custom, and part of a kit that JAX have developed. New triple trees clamp onto Honda CBR929 RR forks, with the brake calipers, discs and alloy wheel from the CBR carried over too.

The rear end is a custom set-up too, using a 2004 Ducati Monster rear wheel and upsized sprocket, and custom-spec YSS piggyback shocks. “We decided to go with this setup because the front and rear wheels were both three-spoke alloys and provided consistency for the entire build,” says shop owner Jas Babalija. 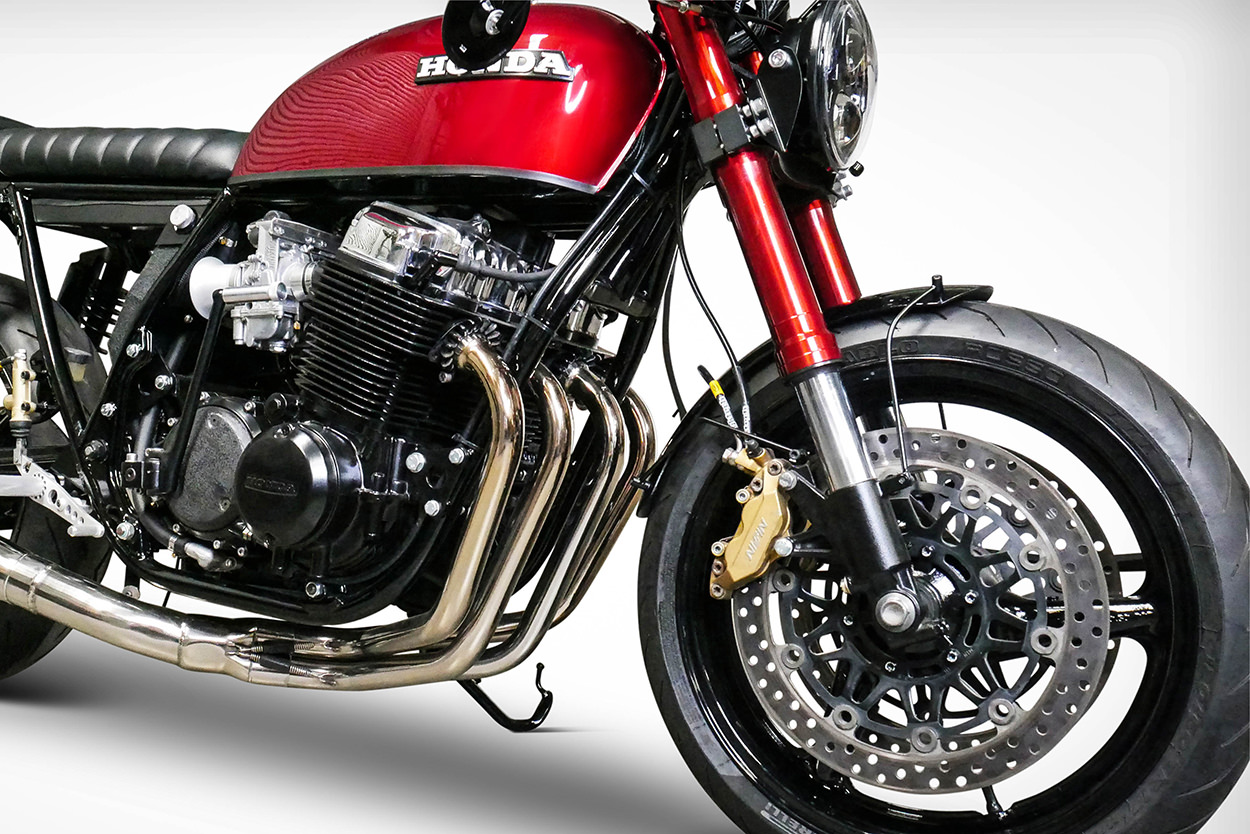 The iconic inline-four gets a boost from Mikuni RS34 carbs and a set of 50mm velocity stacks. It bumps up horsepower by 25%—“At least, that’s what Mikuni claim!”

JAX have simplified the back of the frame, and added a classy new seat and many less obvious details, such as a custom oil tank, a complete Motogadget fit-out and a lithium battery-compatible regulator/rectifier from Rick’s Motorsport Electrics. Multiple small items have been turned on the lathe or machined on mills, such as suspension bolt covers. 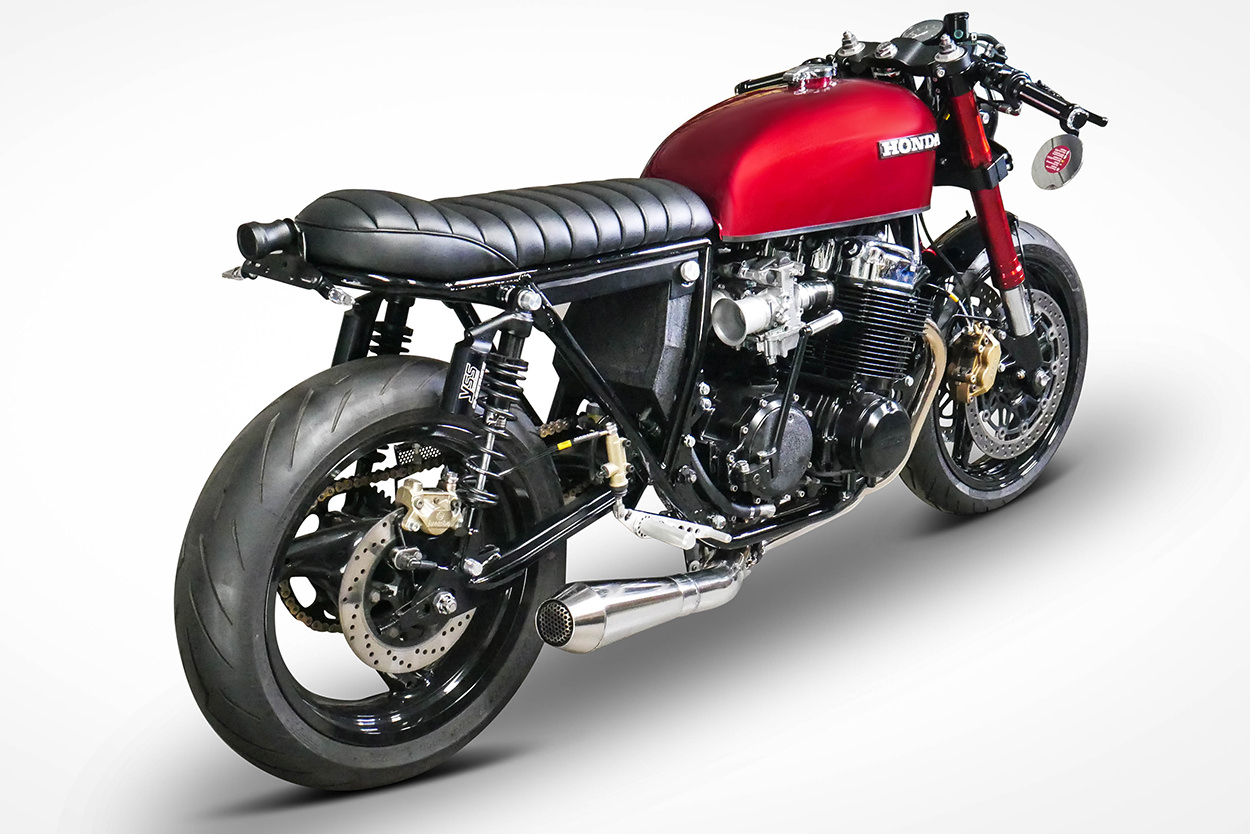 There’s even a five-piece crank case breather: “No-one will ever see it unless they duck in right under the fuel tank, but we’ll always know it’s there,” says Jas.

The CB750 is now about 30kg lighter than stock, and no doubt handles far better than the original—helped by modern Pirelli Diablo Rosso III tires. Here’s to another half century on the road! [JAX Garage] 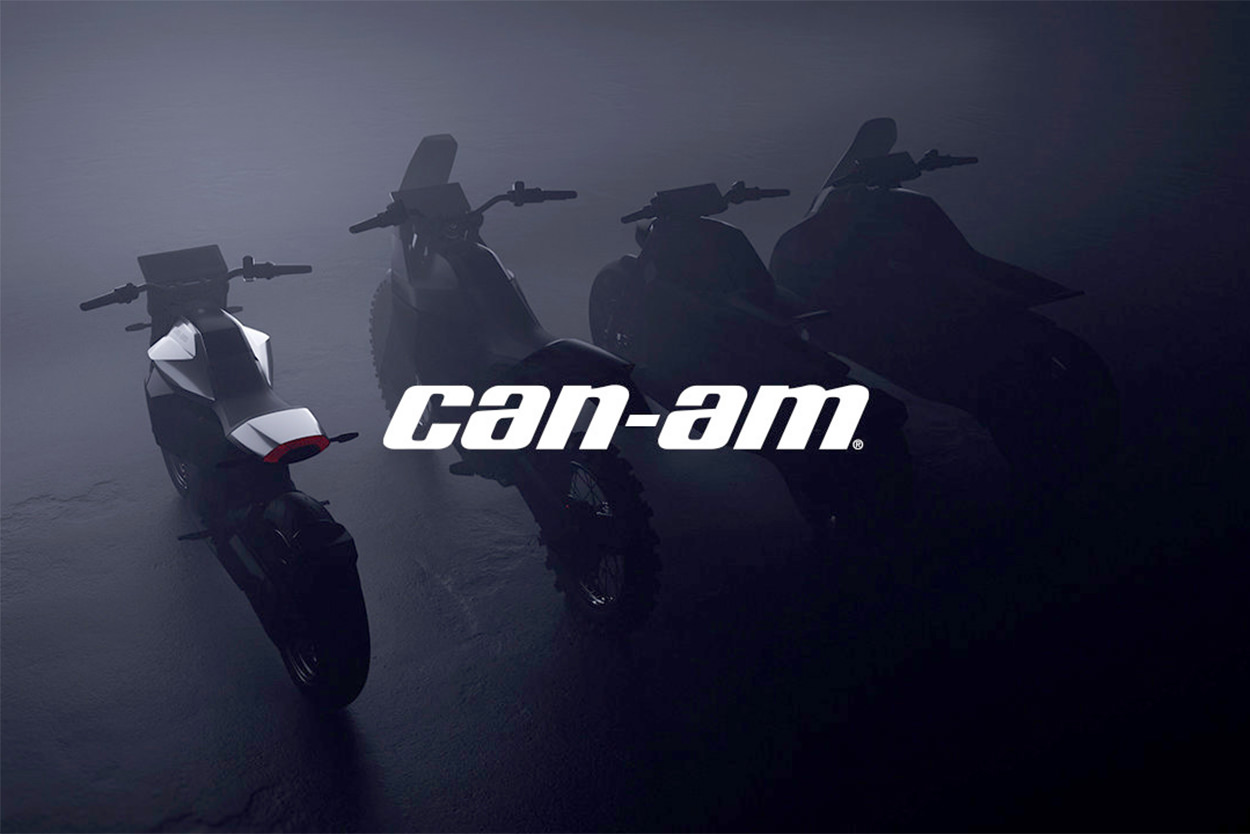 Can-Am teases a family of electric motorcycles The moto industry is now starting to resemble the auto industry from a few years ago. New electric bikes are being teased every week, and the latest to join the fray is Can-Am. 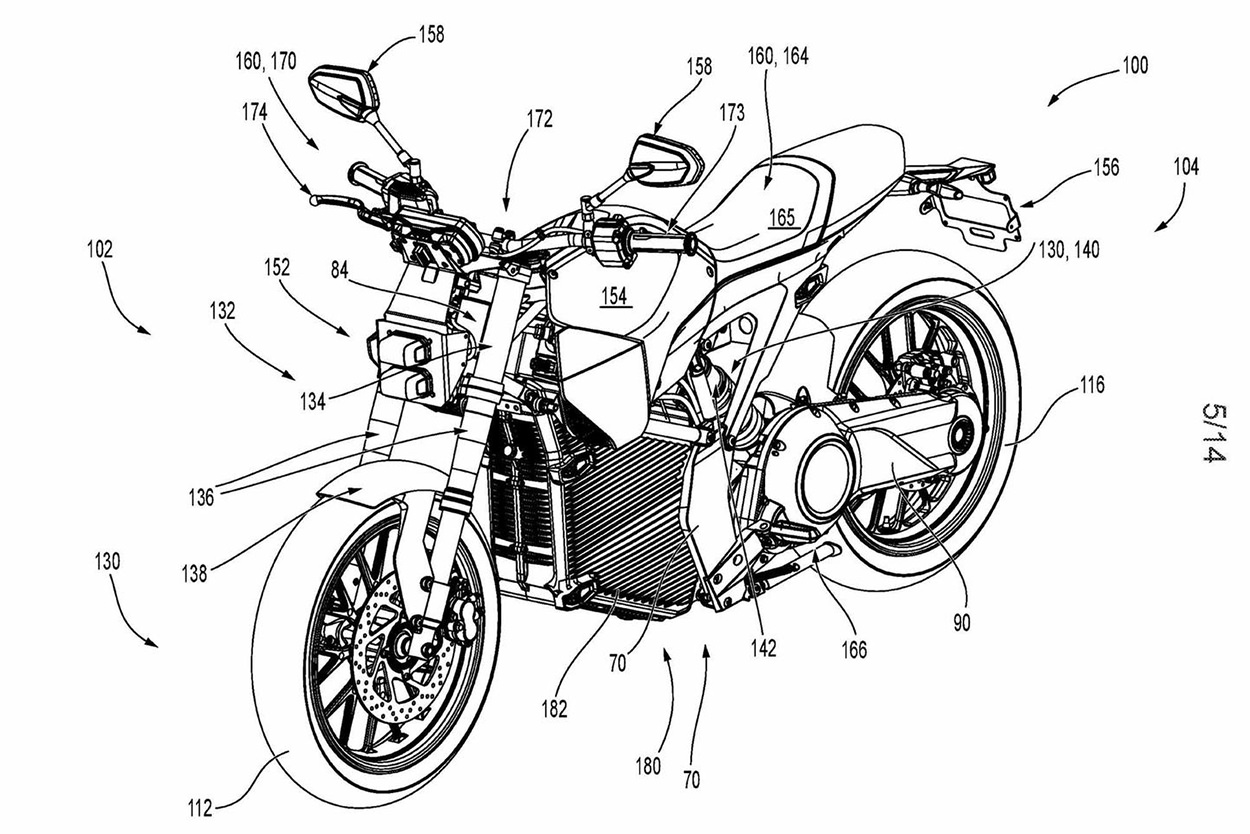 Can-Am’s Canadian parent company Bombardier Recreational Products has annual revenues measured in billions of dollars, so this move is significant. It already owns the assets and IP of Alta, and the new bikes are projected to hit the market in two years.

Unfortunately, although it has filed patents, BRP hasn’t revealed any more details: all we’ve got is a murky video. Plus a telling quote from the press release: “Riders can expect these new state-of-the-art electric Can-Am motorcycles to be perfect for everyday commuting and, to stay true to the track & trail heritage of the brand, recreational on- and off-road riding.” Bring it on. [Via]